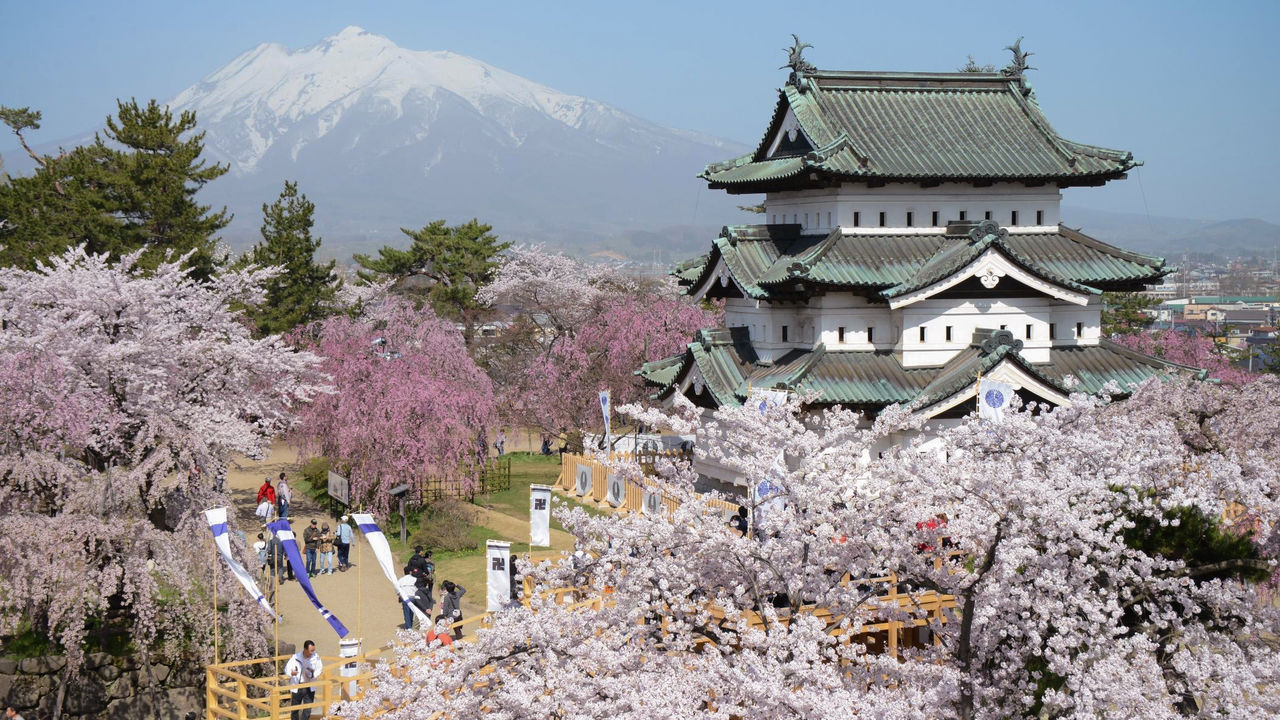 Apr 20, 2018
Hirosaki, in the northern Honshū prefecture of Aomori, is home to one of Japan’s finest sakura spots. More than 2 million visitors come to see the blossoms each year against their spectacular backdrop of Hirosaki Castle and Mount Iwaki this year the festival celebrates its centennial with a full slate of special events.

A Paradise of Petals for Japanese and International Visitors Alike

Located in present-day Aomori Prefecture at the northernmost end of Japan’s largest island, Honshū, Hirosaki was a flourishing castle town during the Edo period (1603–1868). Today, the former site of Hirosaki Castle (built in 1611) has become Hirosaki Park, home to around 2,600 sakura trees of 52 different varieties. The trees in the park flower from late April to early May, and the Hirosaki Cherry Blossom Festival held during that period is famed across Japan. Visitors from all over the country and even overseas gather to admire the views of the surviving castle tower—designated a national important cultural property—rising above the riot of cherry blossoms, with Mount Iwaki still snow-capped in the distance.

A Full Slate for the Centennial Year of 2018 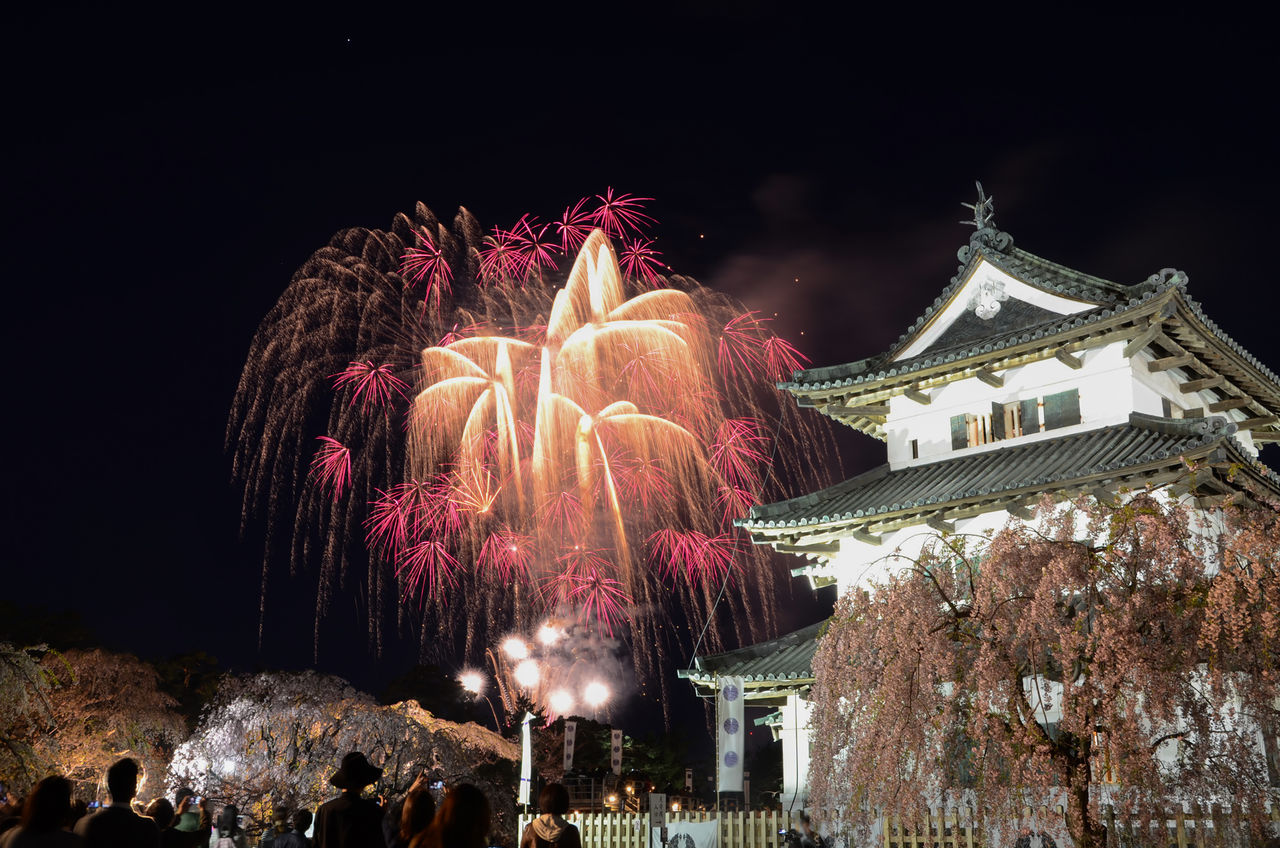 A fireworks display and commemorative parade are among the events planned for this year. (© Hirosaki Parks Division)

The first Hirosaki Cherry Blossom Festival was held in 1918 under the name “First Cherry Blossom Viewing Party.” A full slate of special events are planned to make the centennial festival in 2018 one for the ages. During the festival period, images of the sakura will be shown on the castle walls using projection mapping, and attendees will be able to tour the grounds in rickshaws or sail the moat in sightseeing boats. On May 3, designated “Hirosaki Cherry Blossom Viewing Party Day,” a fireworks display and commemorative parade are planned. 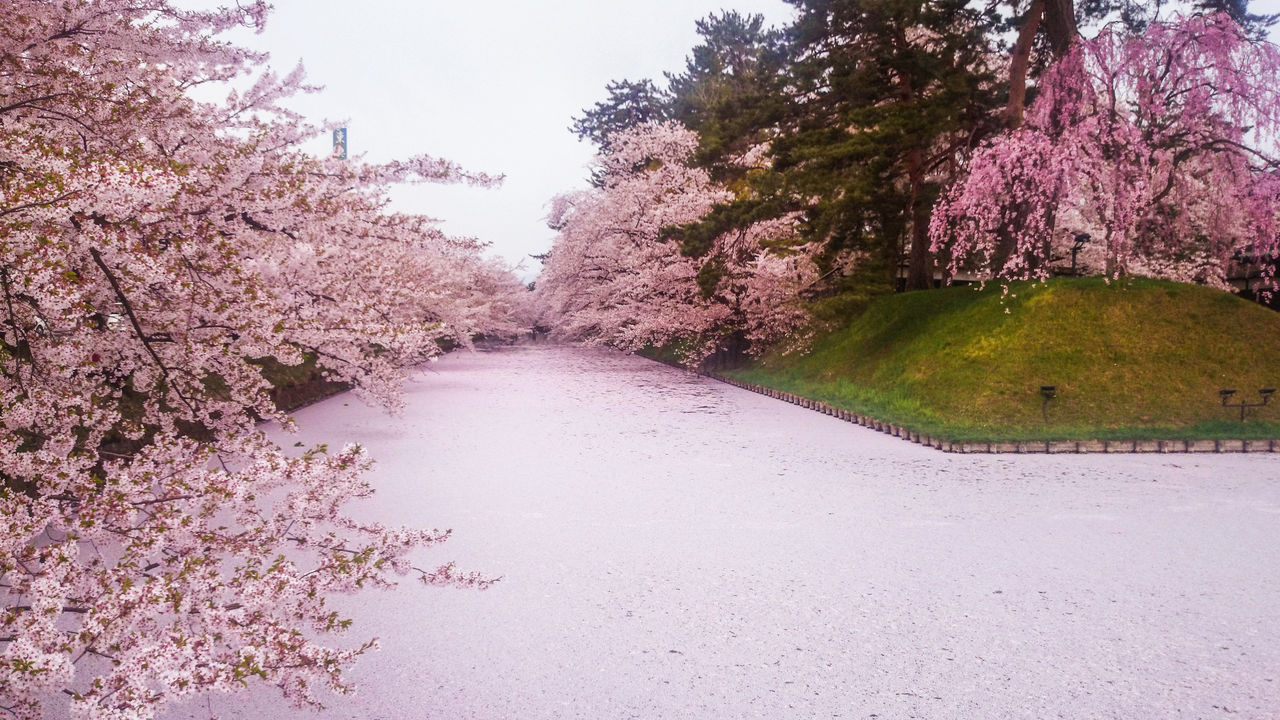 Hana-ikada, literally “rafts of flowers,” drift through the moat surrounding the park after scattering from the trees. (© Hirosaki Tourism and Convention Bureau)

Each year the festival sees hundreds of stalls go up in the park, selling yakisoba (fried noodles), takoyaki (octopus fried in balls of batter), and other festival foods for visitors to enjoy as they stroll below the blooming trees. There are also traditional Japanese attractions like kingyo-sukui (goldfish scooping), yo-yo balloons, haunted houses, and even a motorcycle circus—something for everyone, young or old.

During peak sakura season, virtually every view within the park is picturesque, but the hana-ikada (flower rafts) created by sakura petals falling into the moat surrounding the park are particularly popular social media shares. Also known as hana-jūtan (flower carpets), these waterborne formations shift with the winds into an ever-changing array of patterns. 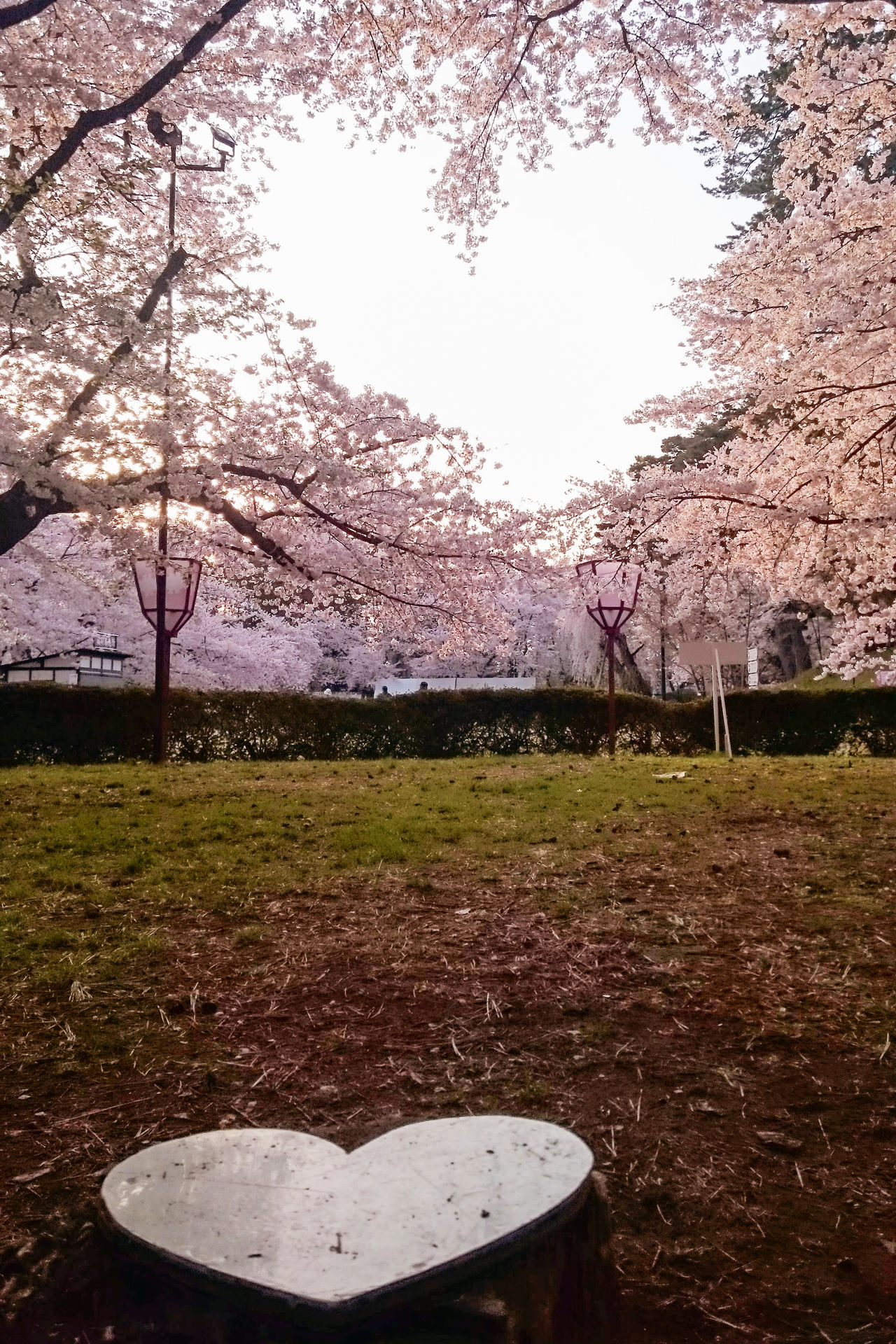 Visitors seek out the “Sakura Heart” as a romantic backdrop for their photos. (© Hirosaki Tourism and Convention Bureau)

Popular among young women and couples is the “Sakura Heart” quietly tucked away on the grounds. When viewed from a certain spot when the blossoms are in full bloom, two boughs arching together overhead create a heart-shaped patch of sky above. The exact location is not made public, but the heart-shaped plate on a nearby stump reveals the secret to observant explorers. 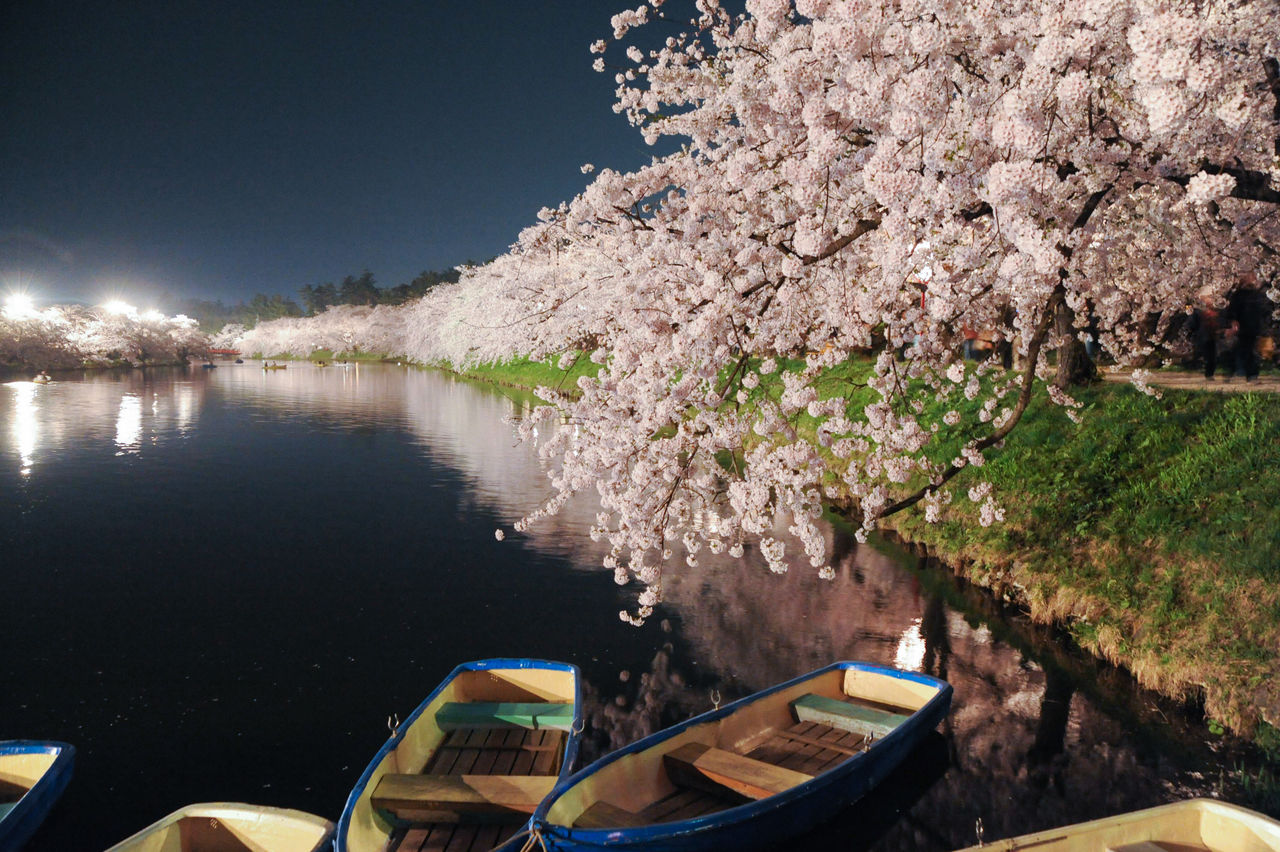 The inverted sakura reflected in the water’s surface are a must-see. (© Hirosaki Tourism and Convention Bureau)

Locals are particularly fond of the 360-meter “sakura tunnel” along the western moat, where the boughs are carefully trimmed to dip just low enough for the flowers to bloom at eye level.

Boats can be hired from 9 AM to 5 PM during the festival period. Viewing the sakura as reflected in the water’s surface is a strongly recommended experience. At night, the park is illuminated, giving it a dreamy atmosphere quite different from the day. 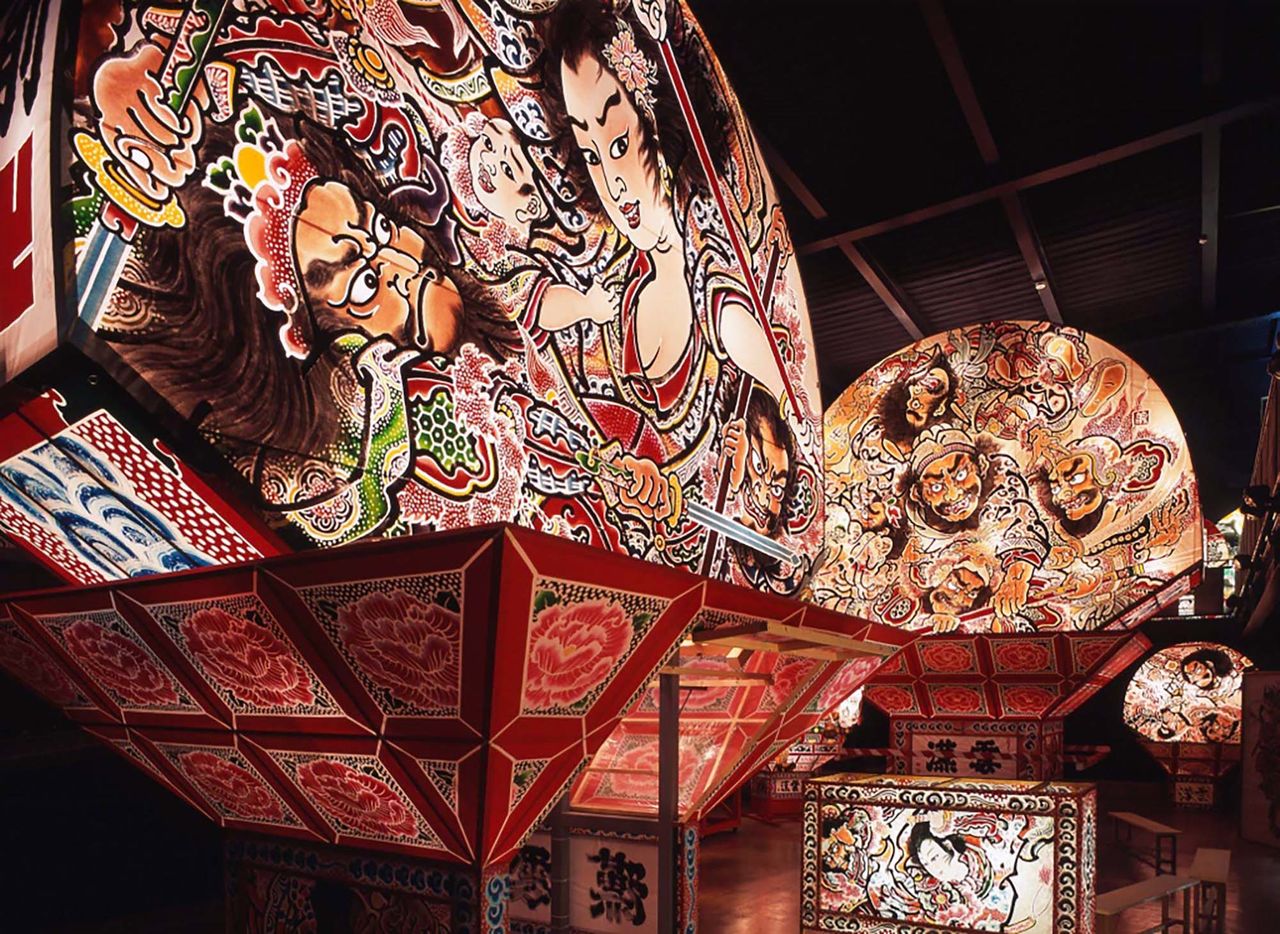 The Tsugaru-han Neputa Mura, next to Hirosaki Park, offers visitors a chance to learn about the culture of the Tsugaru region where Hirosaki is located. Neputa are large, top-heavy floats, decorated with images of historical warriors, that are paraded through the city during the annual Hirosaki Neputa Festival in the first weeks of August. At the Neputa Mura, these great floats are on display all year round, with ramps alongside them allowing close-up viewing from all angles. (See our articles on the similarly named Nebuta Matsuri in the prefectural capital Aomori.)

The facility hosts performances of Tsugaru-jamisen, the local tradition of shamisen music, and workshops where visitors can try their hand at local crafts like kingyo-neputa (goldfish neputa) and Tsugaru kites. There is also a gift shop well-stocked with souvenirs.