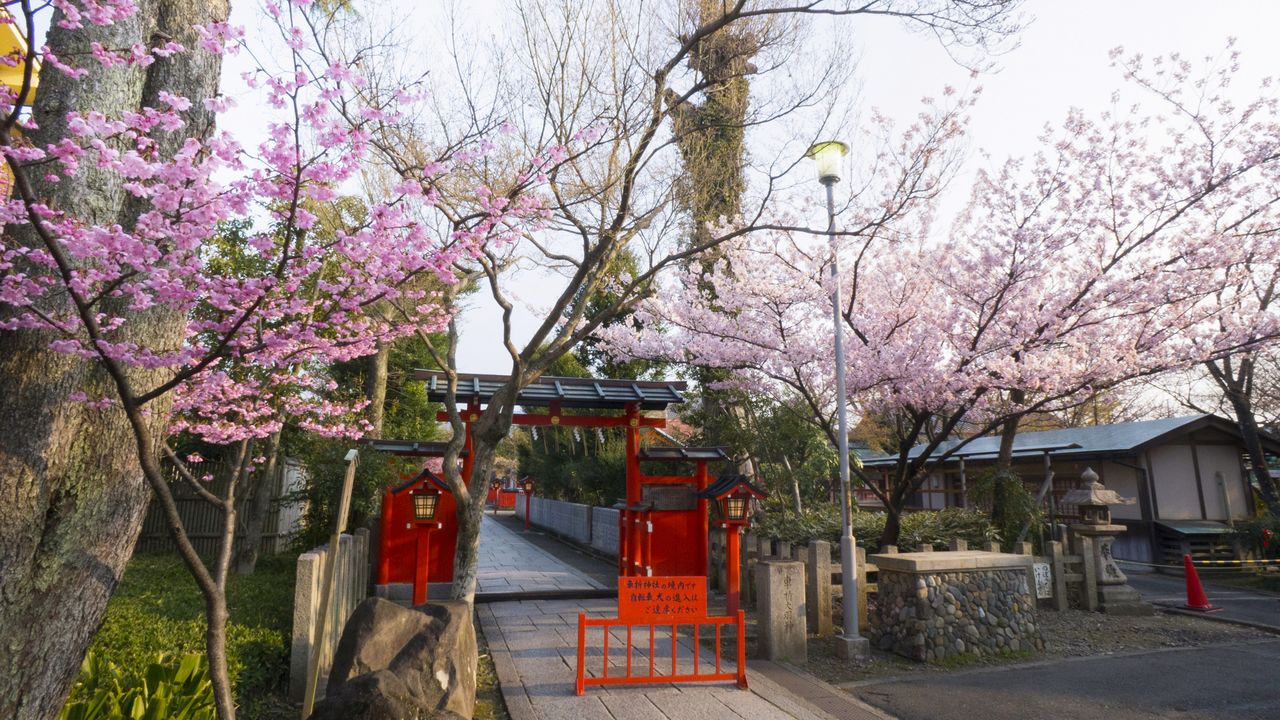 Travel Apr 5, 2019
Cherry blossoms are viewable for longer at Kurumazaki Shrine than at many other places.

Located in Ukyō-ku, Kyoto, Kurumazaki Shrine was once known as the “Cherry-Blossom Shrine.” A short walk from Kurumazaki-jinja Station on the Randen Arashiyama Line, the shrine is host to many visitors in spring who come to see the cherry trees in bloom. 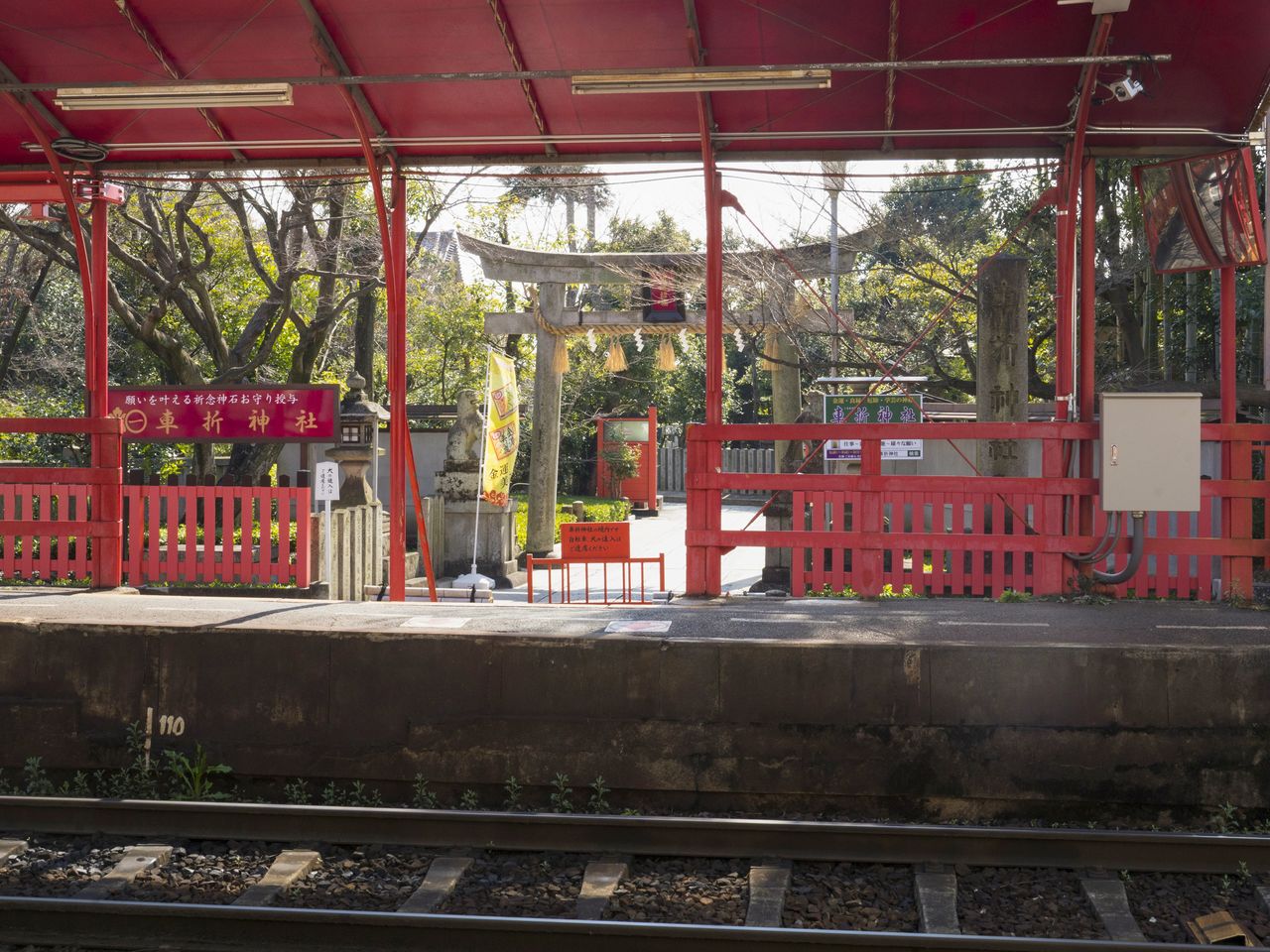 The torii at the rear approach to the shrine is visible from the platform of the Randen Kurumazaki-jinja Station.

The shrine commemorates one Kiyohara no Yorinari, a Confucian scholar of the late Heian period (794–1185) who was known for his erudition and his political acumen alike. After his death, numerous cherry trees, of which he was inordinately fond, were planted on the grounds where his mausoleum had been erected. These grounds have since been given over to this Shintō shrine, which had been fondly thought of as the “Cherry-blossom Shrine” since its establishment. It is said, however, that the shrine earned its present name as the result of an occasion when an oxcart transporting Emperor Gosaga (1220–72) to Mount Arashi was stopped in front of the shrine owing to its drag link breaking. 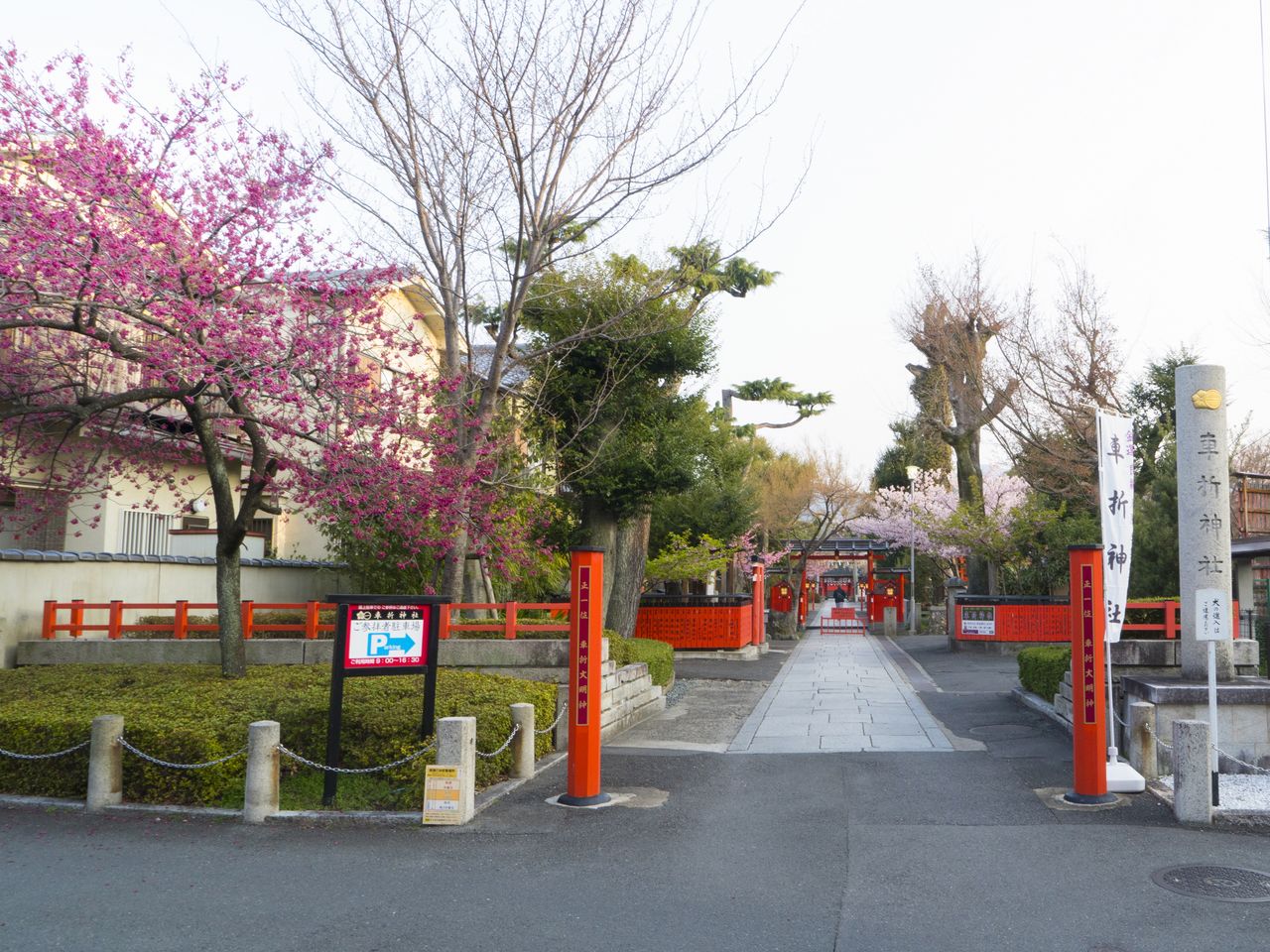 A Taiwan cherry tree blooms brilliantly near the shrine name posts (the remains of what was once a second torii), which stand on the way to the main torii. 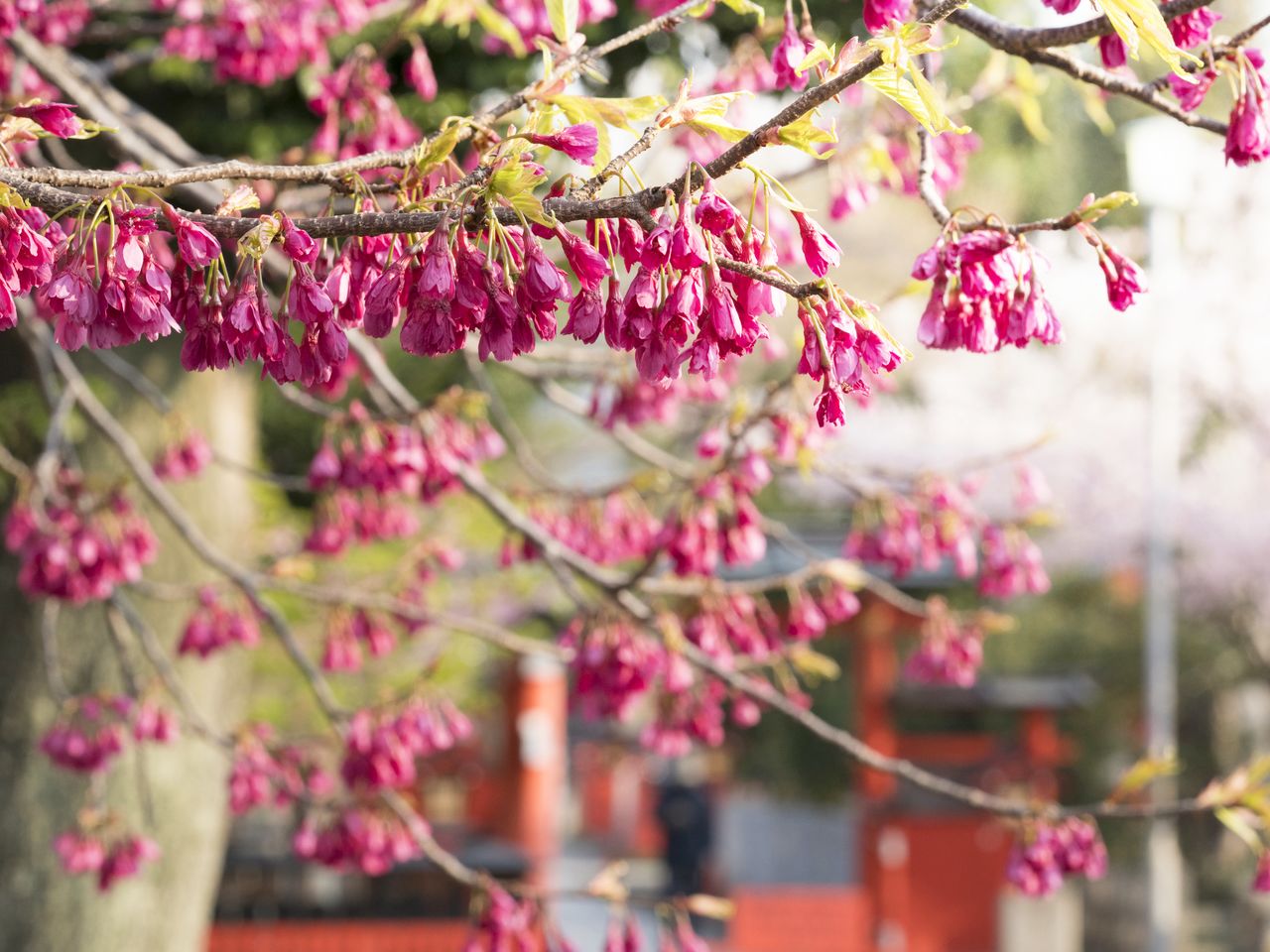 The Taiwan cherry is best viewed in mid-March.

There are 40 cherry trees of some 15 varieties planted on the shrine grounds at present. The Kawazu cherry trees reach their optimal viewing time in early March, and the Yoshino and other cherry trees also bloom around this time, followed by the nioi-zakura trees, which, with their distinctive perfume, reach full bloom in late April. While known as a place where the cherry blossoms can be viewed for longer than many other places, visitor numbers reach a peak in late March, which is the blooming time for the so-called Keisen-zakura, named for Japanese painter Tomita Keisen (1879–1936), who contributed the tree to the shrine. 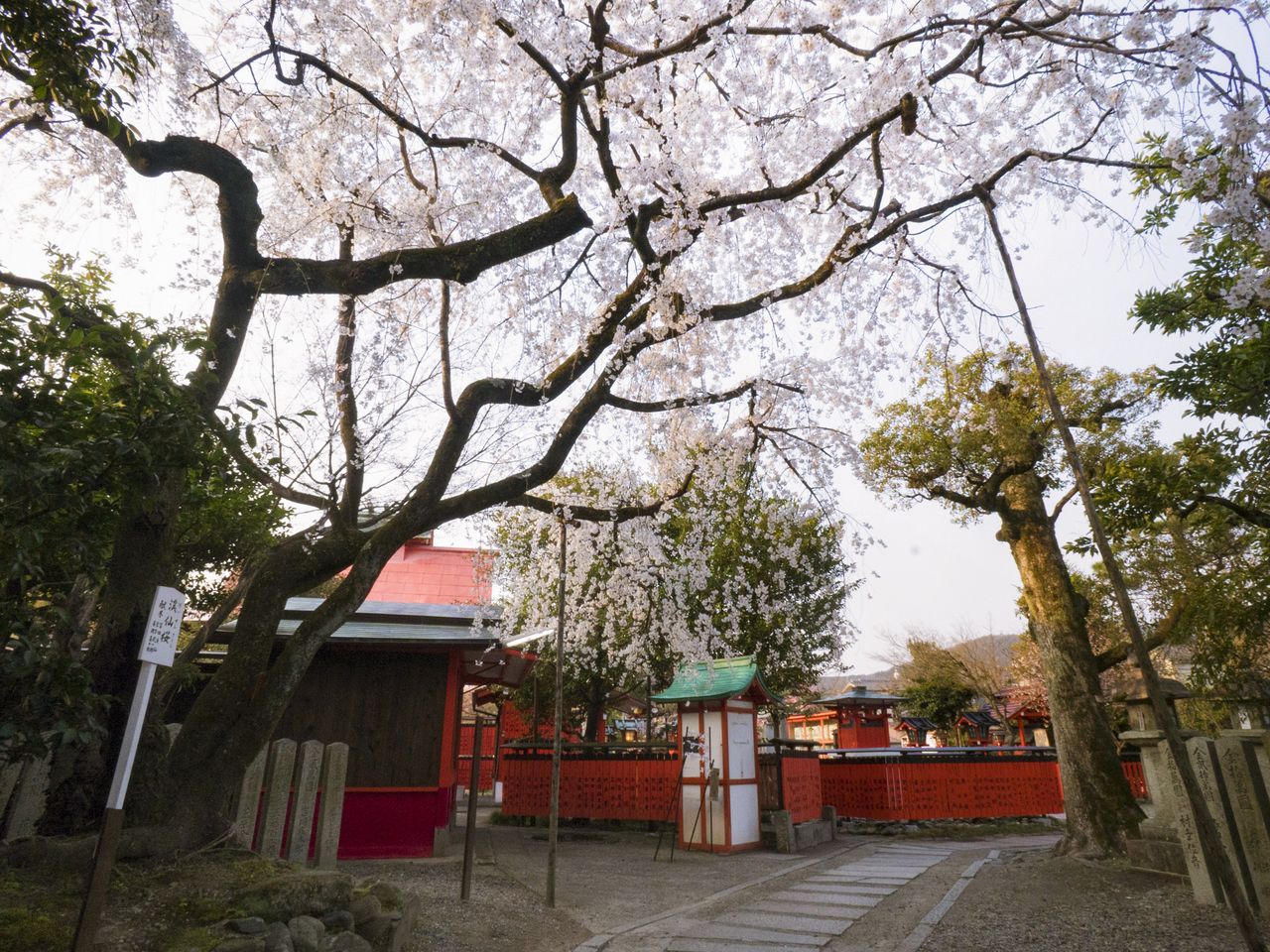 East along the shrine path from the chūmon (inner gate) brings visitors to where the elegant Keisen-zakura stands. It is said that Keisen was a close friend of Tomioka Tessai—one of the grand masters of Japanese-style picture painting, who also served as chief priest of Kurumazaki Shrine.

Offerings by Popular Entertainers, Too

In addition to hopes that Yorinari’s achievements will rub off on worshipers in the form of better scholarship, the shrine is also believed to offer benefits of “promises not being broken,” in accordance with the upright life led by Yorinari. It is thus popular with persons looking to pray for romance, marriage, or success in business. In a unique and renowned custom, so-called “prayer rocks,” a sort-of supposed “power stone,” are given out at the shrine office and taken home by worshipers to pray and make wishes on. Upon fulfillment of these worshipers’ wishes, said worshipers write expressions of gratitude on other rocks and leave them as offerings before the main shrine building. 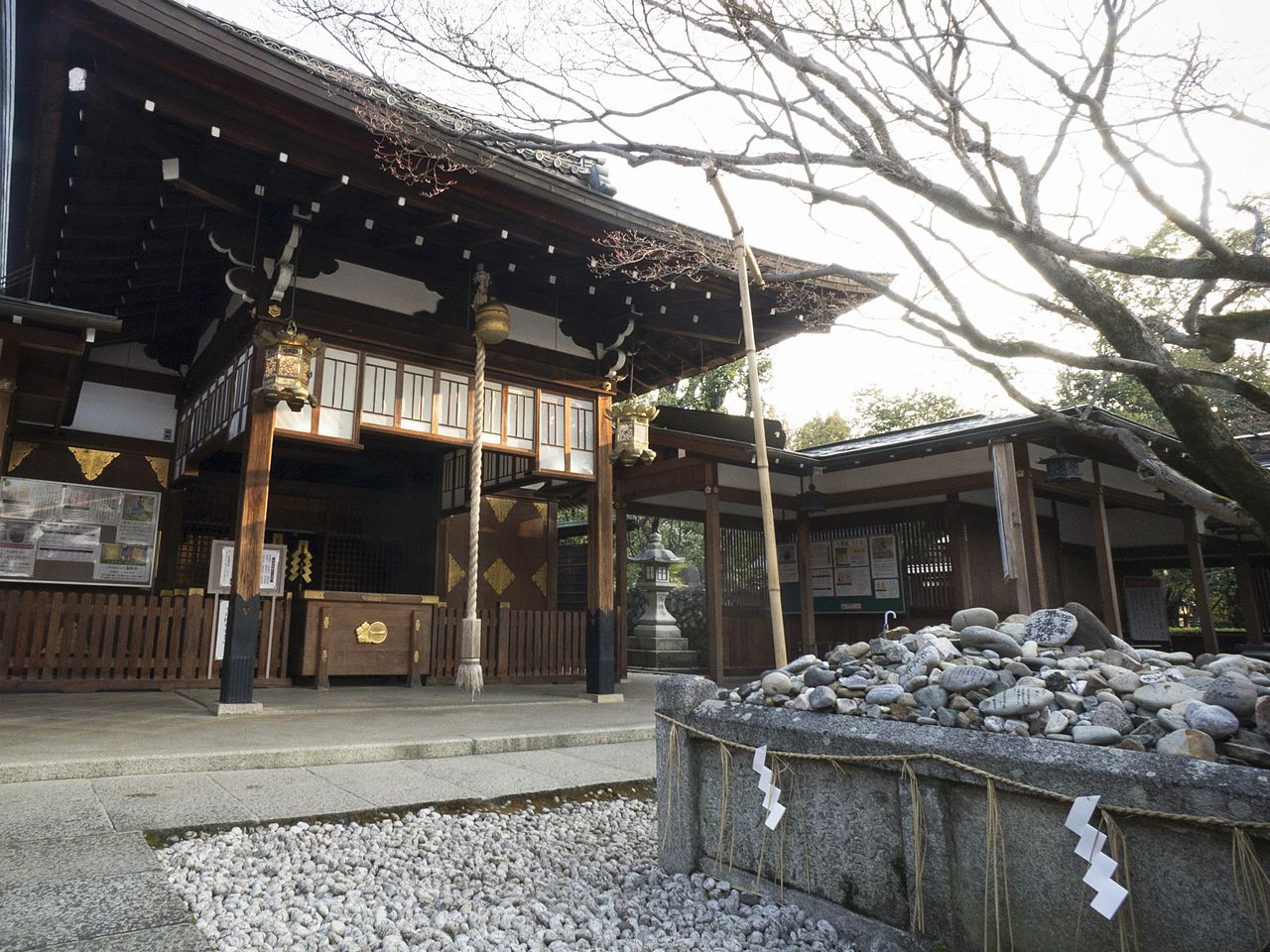 Stones offered by persons who got their wishes are piled high before the main shrine building. 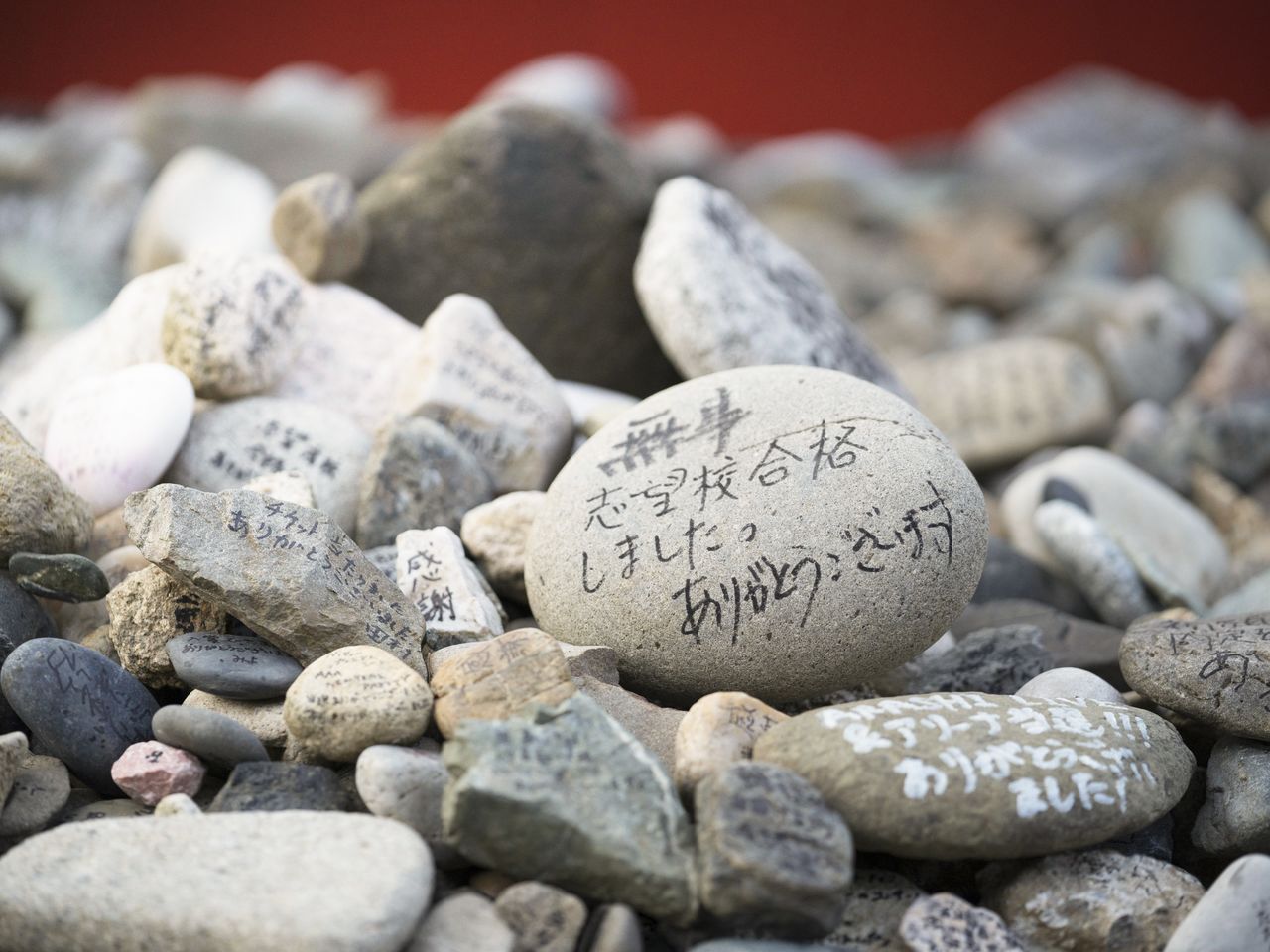 Many expressions of gratitude are written here.

Another recent development is the rise in popularity of a shrine for the performing arts on the grounds of the shrine proper. Dedicated to Ame no Uzume no Mikoto, a Japanese deity whose domain includes these arts, this shrine-within-a-shrine counts many persons involved in arts and entertainment among its devotees, and is home to many fence posts signifying their offerings. Some of these devotional posts are inscribed with the names of particularly popular entertainers, and fans frequently come to get photos taken next to these. It gives some an additional motivation for visiting this shrine during cherry blossom season. 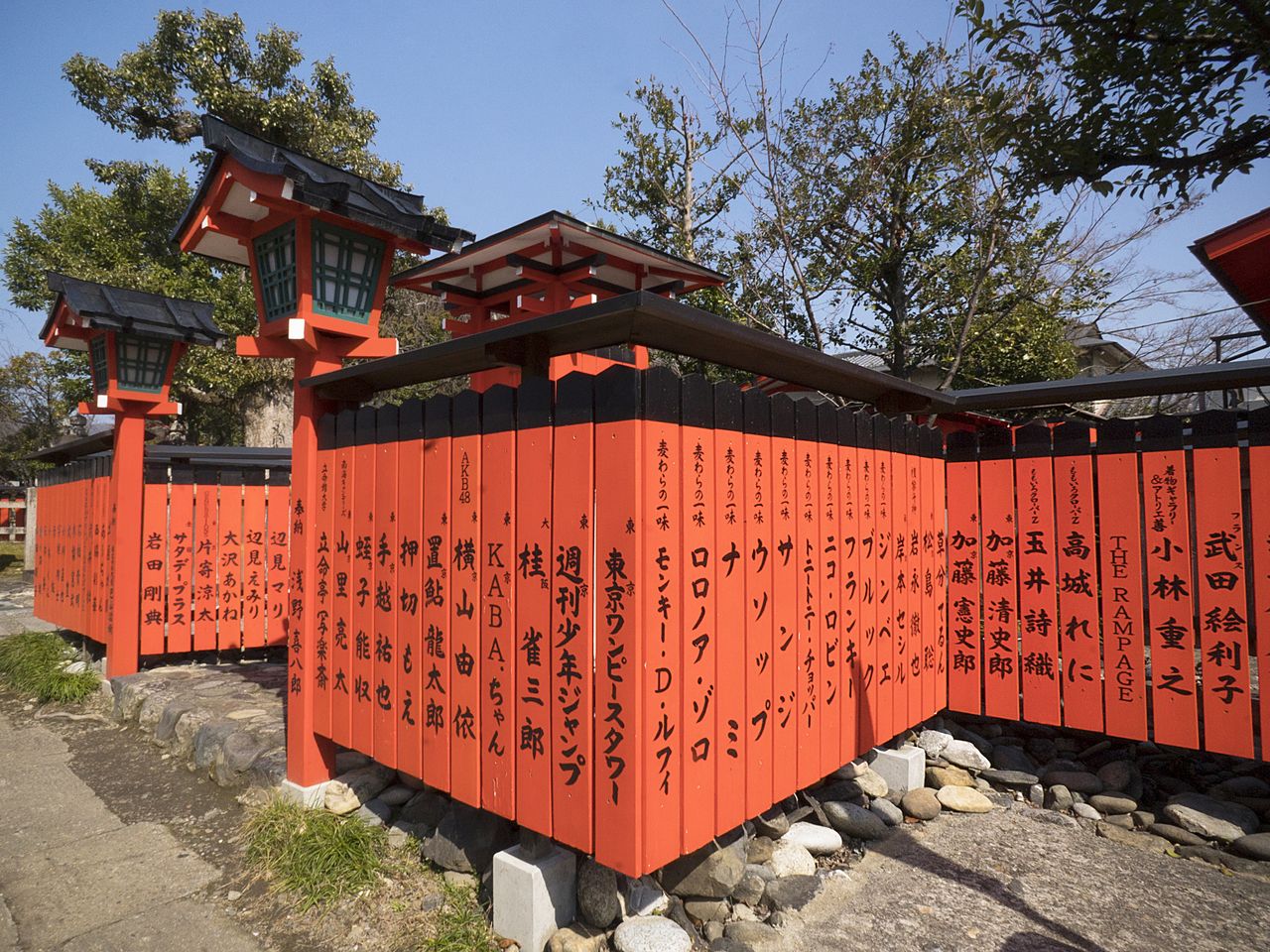 Some of the fence posts at the performing arts shrine are engraved with the names of the pirate crew from the One Piece manga. 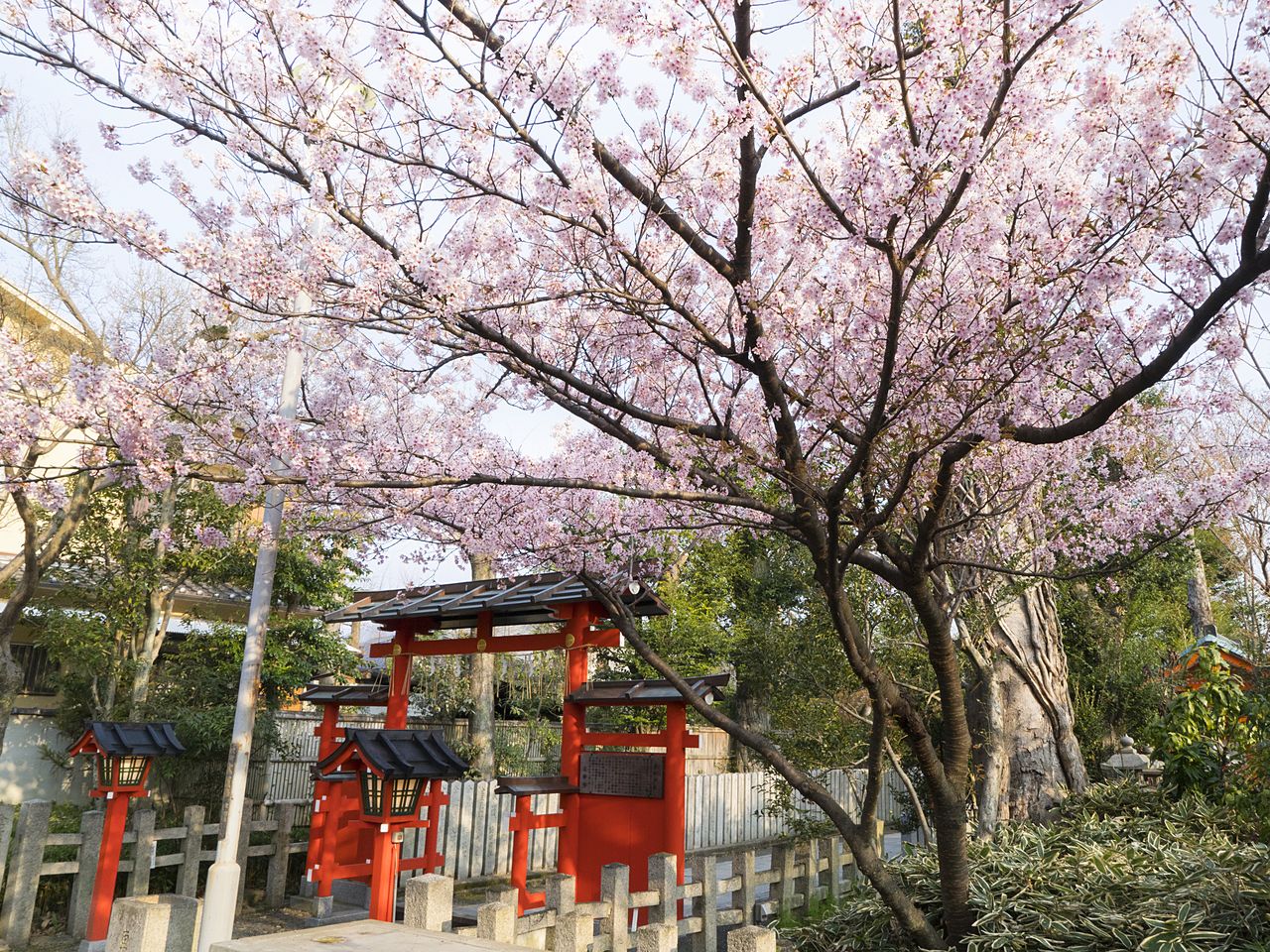 The cherry blossoms in bloom near the third torii, also a popular spot for the turning of the leaves in autumn.