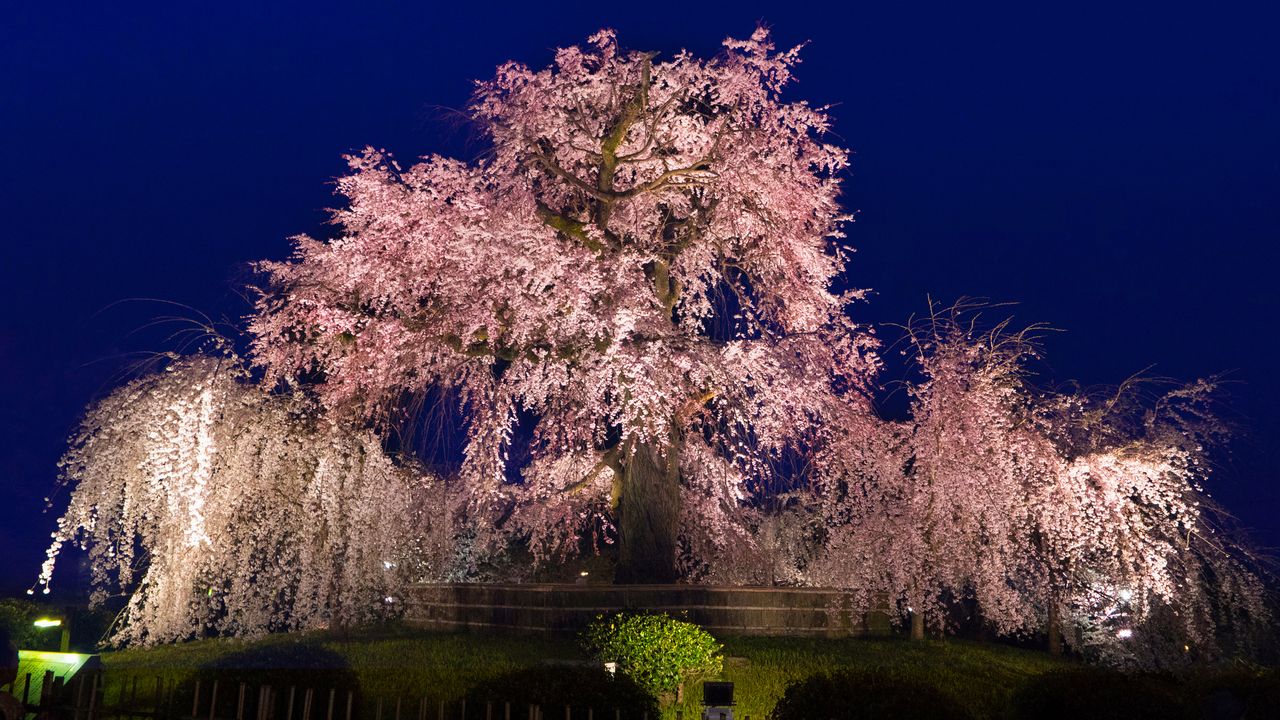 Maruyama Park and the Weeping Cherry of Gion

Travel Apr 18, 2019
Maruyama Park is known for the yozakura of Gion, a cherry tree illuminated to entrance nighttime visitors with its otherworldly charms.

The Weeping Cherry of Gion: a Different View by Night

Shijō-dōri runs east to west through the heart of Kyoto. Yasaka Shrine—commonly referred to as Gion-san, after the Gion district in this part of the city—is located at the eastern end of this thoroughfare. Just past this shrine is Maruyama Park, a Japanese-style garden. Classical Japanese-style luxury restaurants and tearooms are located here and there on the grounds. In the spring, this park is one of the top places in the city, and by extension the country, for cherry-blossom viewing. 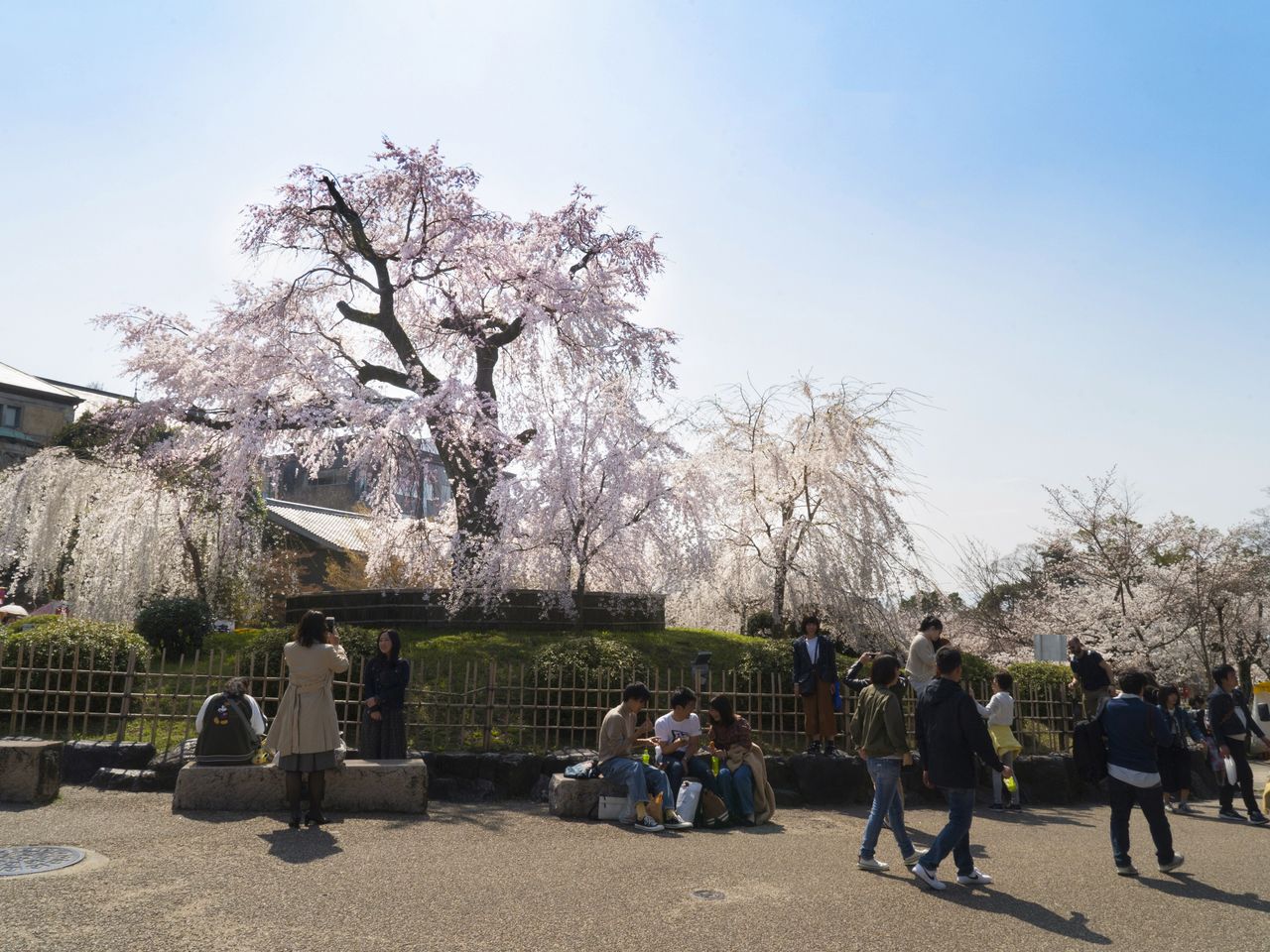 The Gion weeping cherry stands out even among the other magnificent trees in Maruyama Park.

An especially popular cherry tree among the park’s specimens is the Gion shidare-zakura, or weeping cherry tree—also known as the yozakura, or “nighttime cherry tree,” of Gion. This large weeping cherry stands on a low, fenced-in rise behind the shrine. This beauty is actually the second such tree on the site, the first having withered in 1947 after some 200 years in that location. Cherry trees cultivated from the seeds of that tree were transplanted by Sano Tōemon XV, one of a long line of specialists in the care of cherry trees. As of 2019, the current tree has reached an age of over 90 years (it was transplanted to the site from the farm location where it was originally raised), reaching some 12 meters in height.

By day, the tree stands elegantly, with light pink flowers setting off its long branches. When illuminated after dark, those same cherry blossoms stand out dramatically against the night sky, making for a sight by turns lovely and sublime. 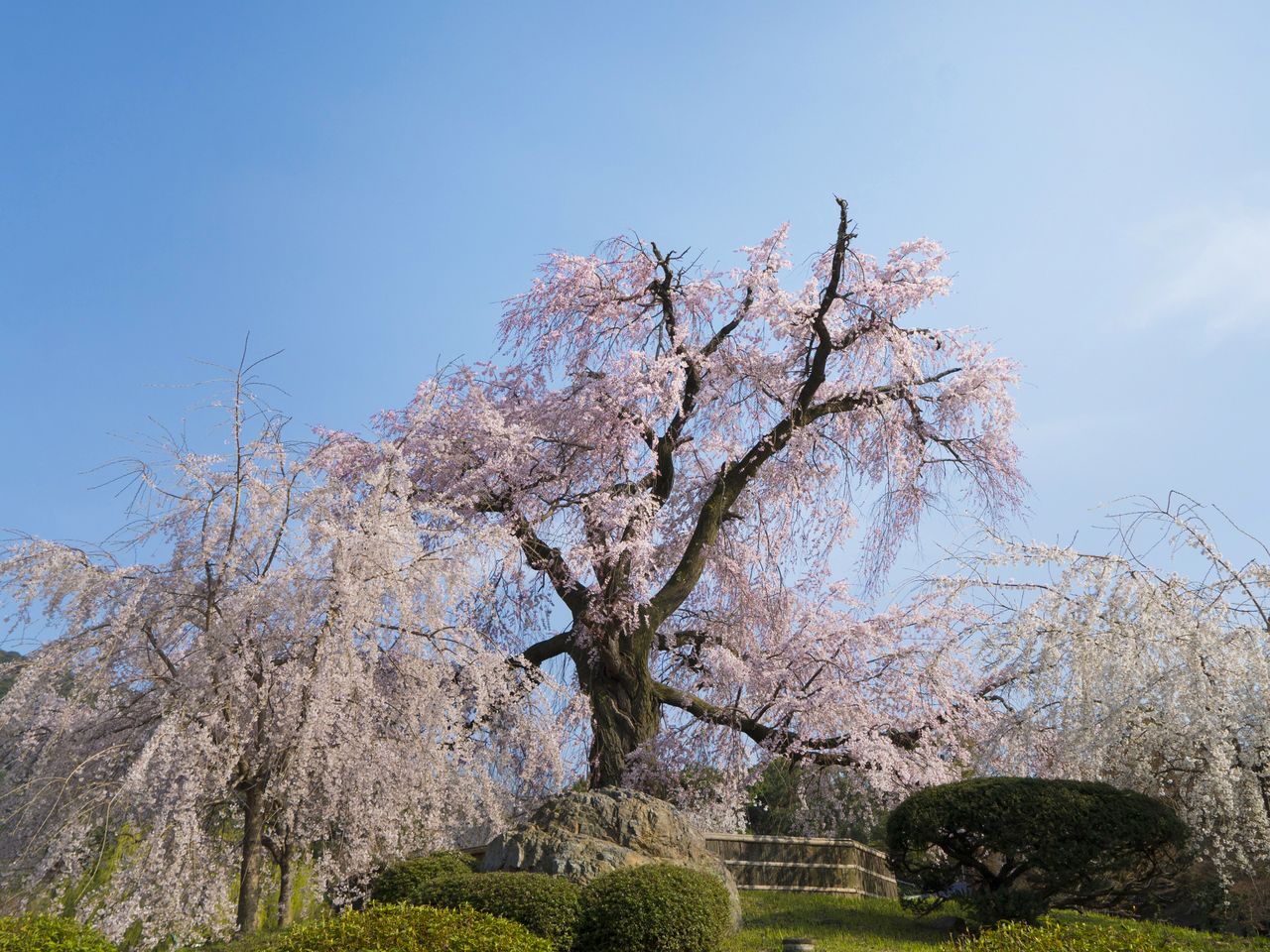 Against a clear blue sky, the blossom-laden branches of the elegant Gion weeping cherry wave in the breeze. 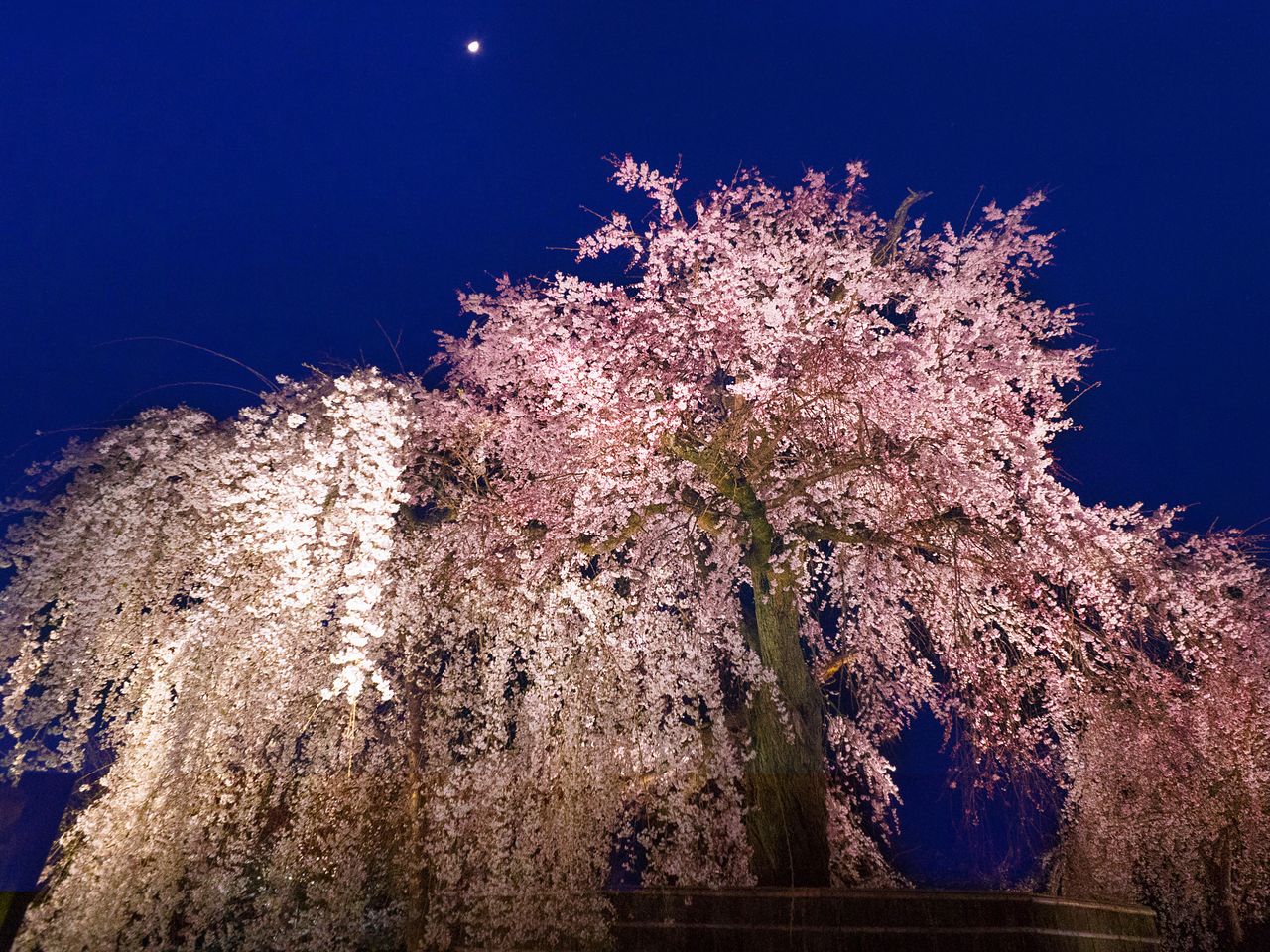 The magnificent form of the floodlit yozakura.

Aside from the Gion tree, there are some 680 cherry trees planted in Maruyama Park, including such other species as wild cherry trees and yae-shidare-zakura (Prunus pendula), with drooping branches and doubled blossoms. These other trees are also floodlit between sunset and midnight, attracting lively crowds of blossom-viewers day and night. 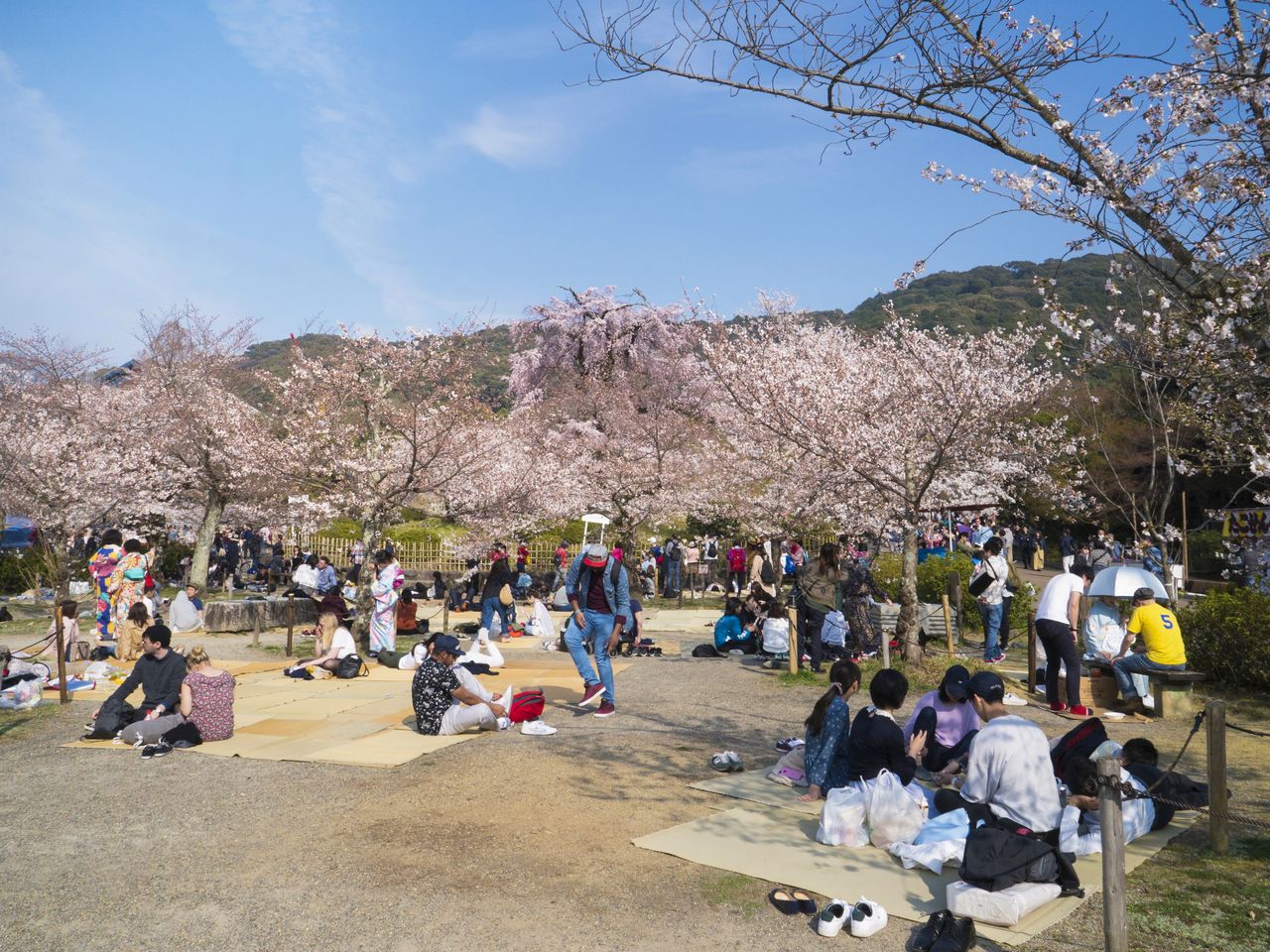 Maruyama Park is a favorite place for blossom-viewing parties.

There are also a number of open-air blossom-viewing tearooms, indicated by the crimson coverings on their benches. Three particularly renowned establishments are Ginsui, Otowa, and Shamisen-jaya. All of them offer customers the opportunity to observe the blossoms while eating and drinking in comfort. 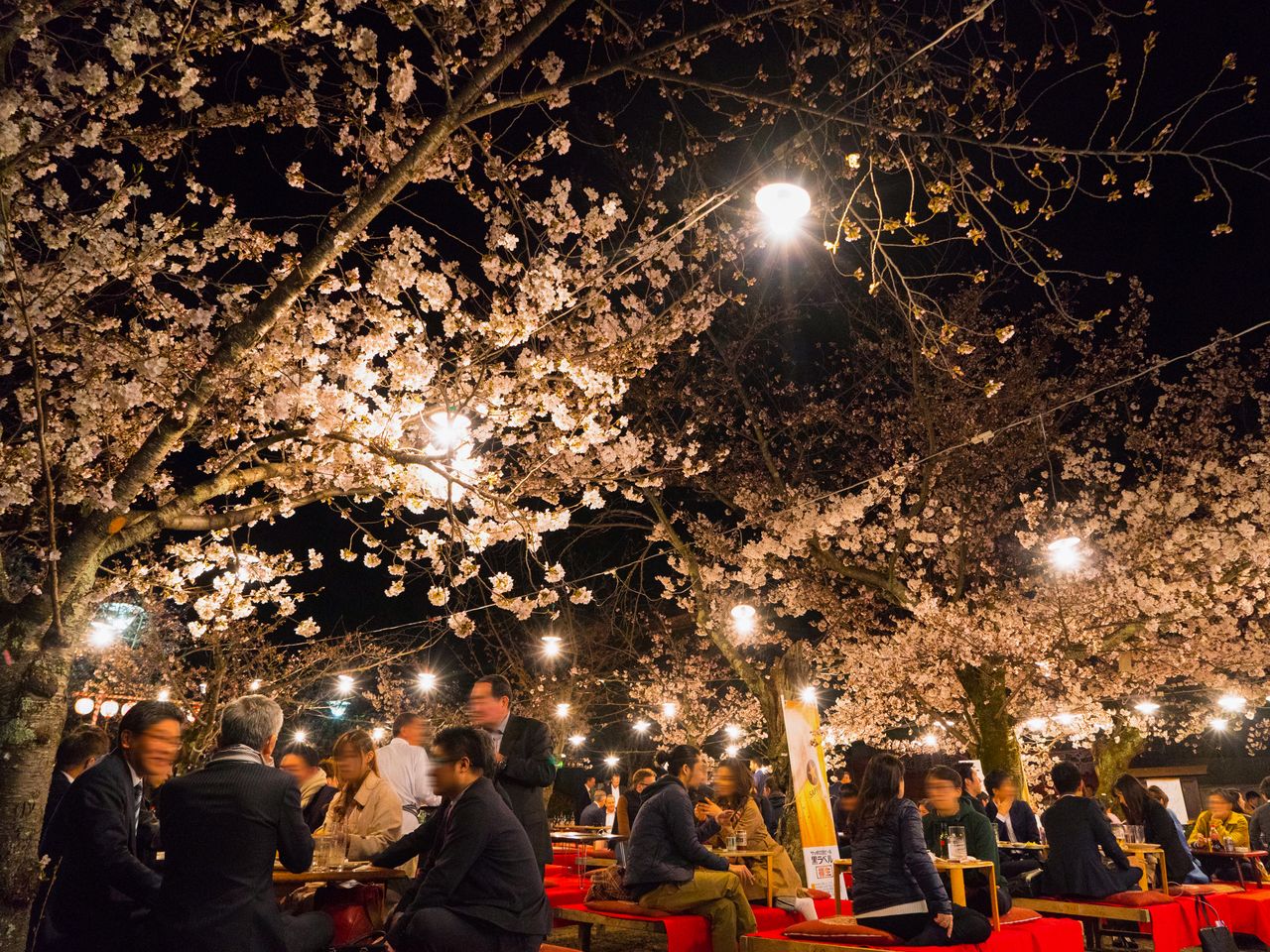 Blossom-viewing tearooms give visitors a relaxing place to savor the blossoms after dark.