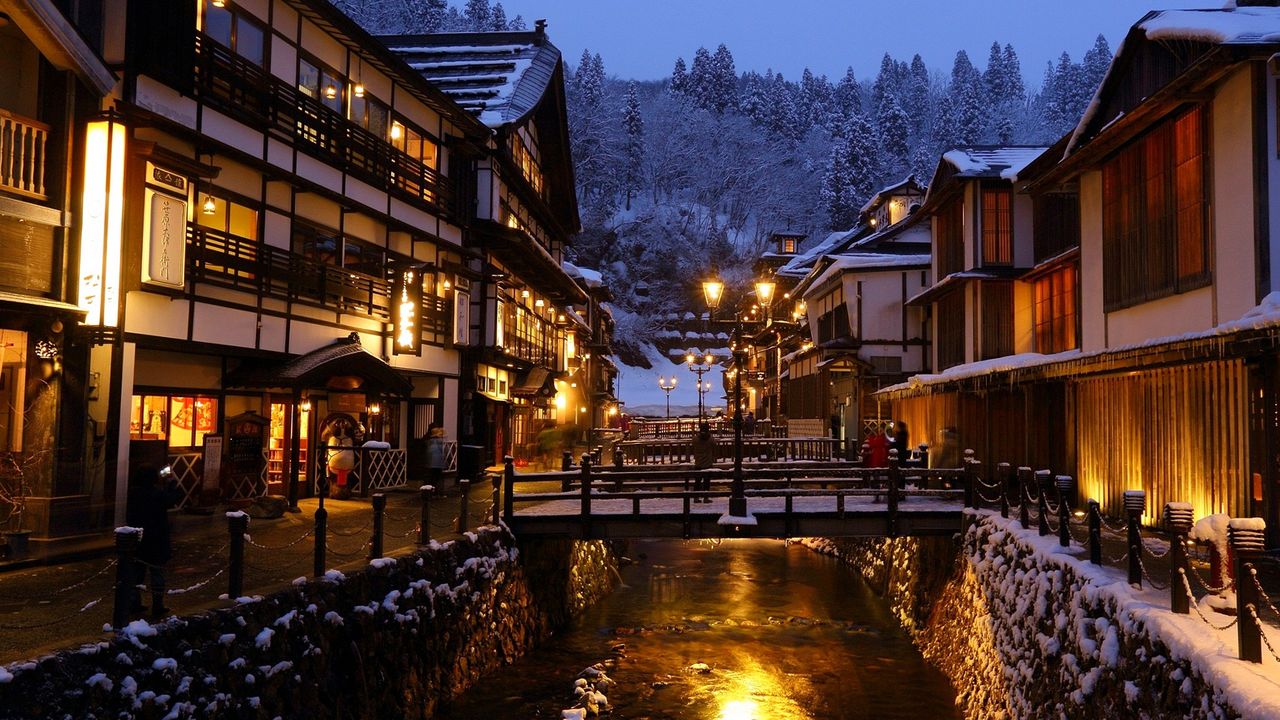 Miners working the old Nobezawa silver mine first discovered the thermal water of Ginzan Hot Springs some 500 years ago. The site flourished during the mine’s heyday in the early seventeenth century, but eventually declined as silver production waned. The hot springs enjoyed a resurgence starting in the Taishō era (1912–1926), though, with multistory wooden ryokan springing up along the banks of the Ginzan River. 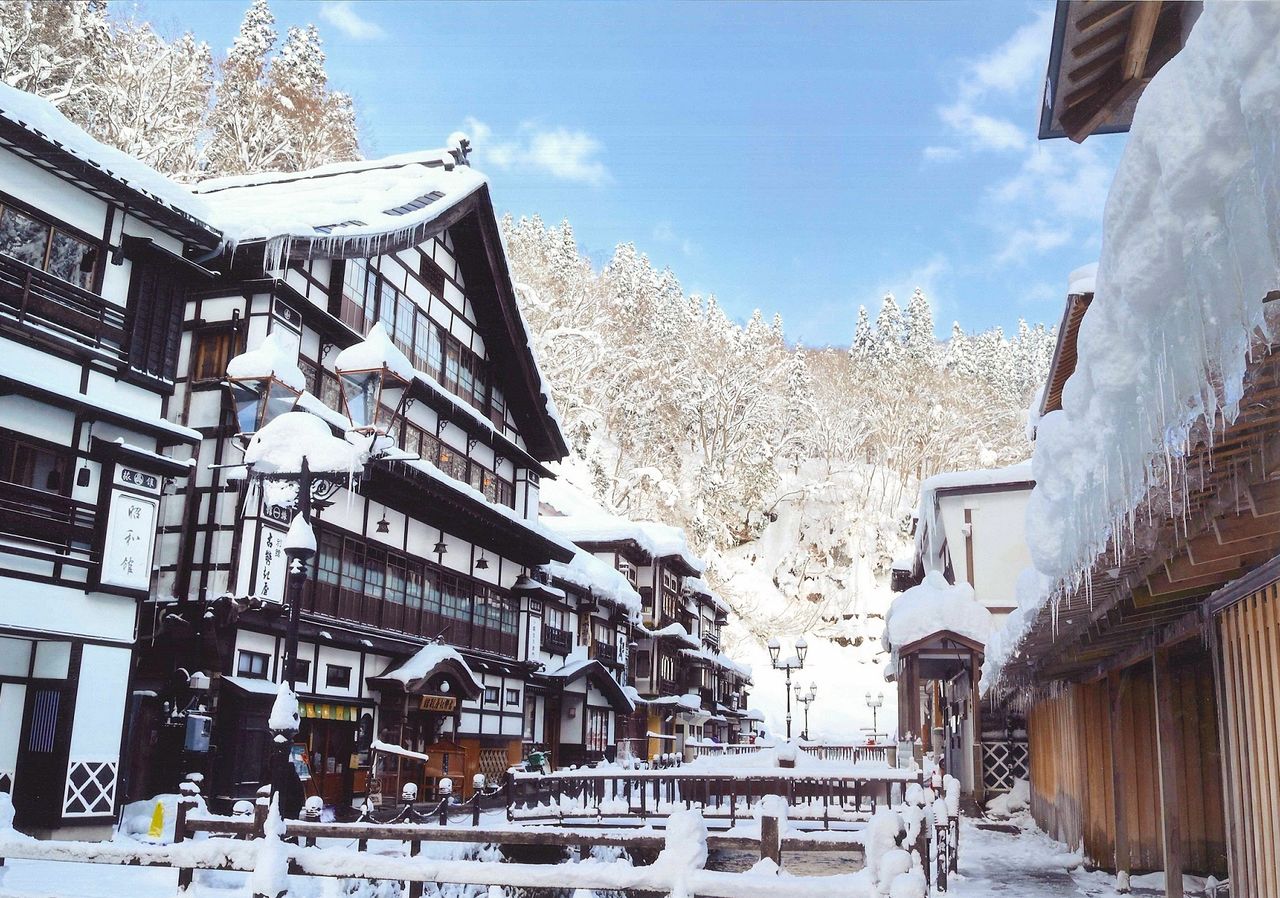 Ginzan Hot Springs draws visitor to its thermal waters and old-fashioned charm. Guests can immerse themselves in the historic atmosphere by renting a kimono to stroll the cobblestone lanes, adorned with eye-catching tiles, and admire the traditional wooden ryokan along the river.

Around sunset gaslights at bridges spanning the Ginzan River are lit, bathing the town in warm light. The scene is particularly moving during the winter months, when the soft glow of the lamps warmly illuminate the snow-covered resort. 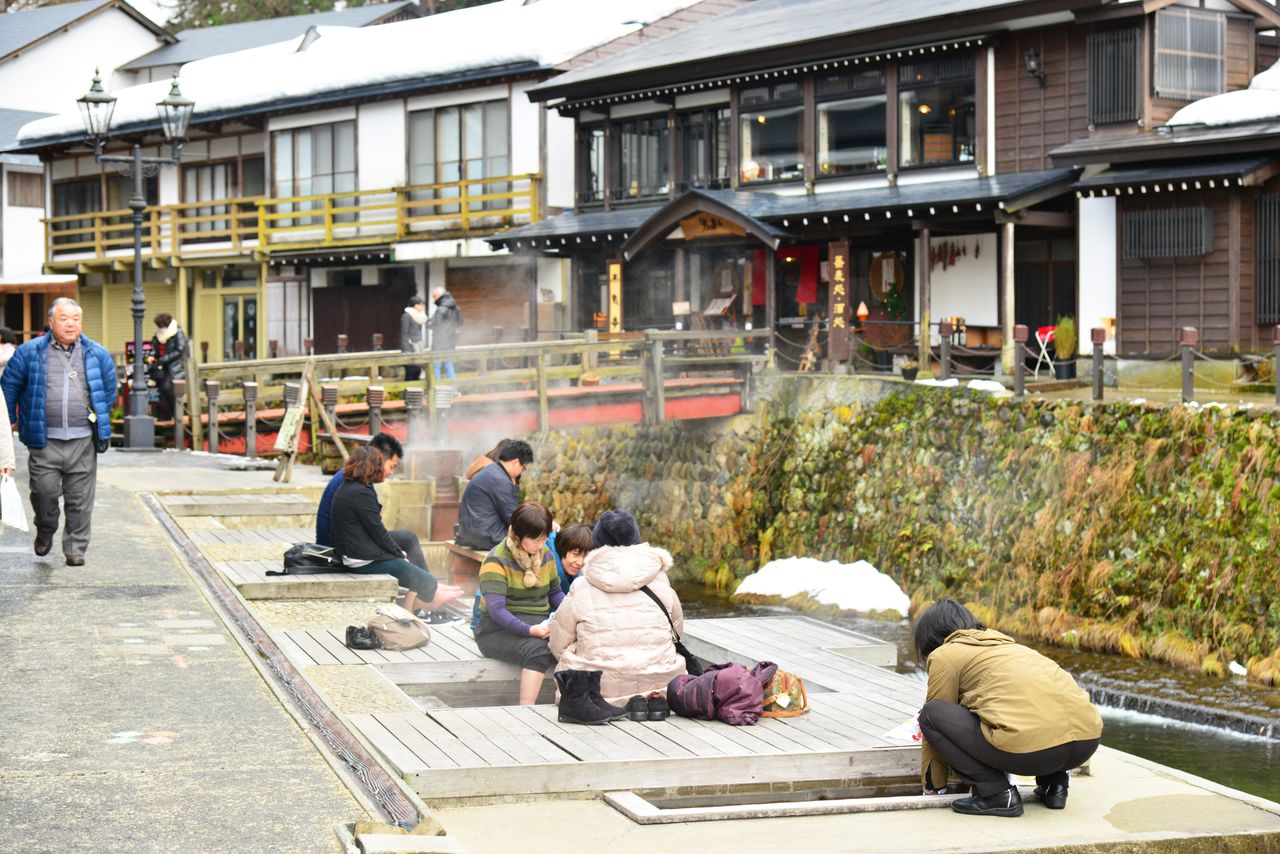 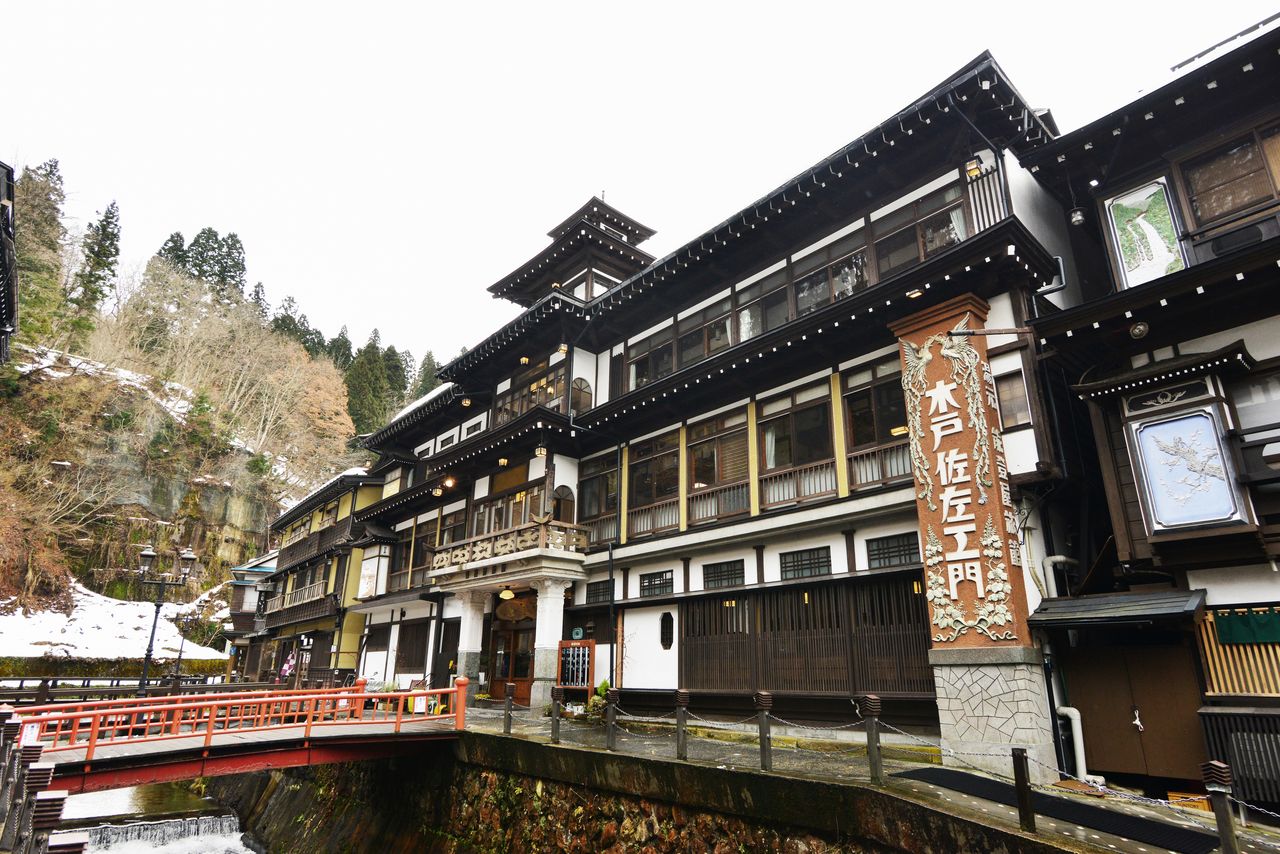 Exterior: A column outside the ryokan bears the name of Kido Sazaemon, discoverer of the silver mine, in kote-e relief. (© Shoe Press)

The centerpiece of Ginzan Hot Springs is the four-story Notoya Ryokan. Established in 1892, the current structure was built in 1921 and is designated a National Tangible Cultural Asset. 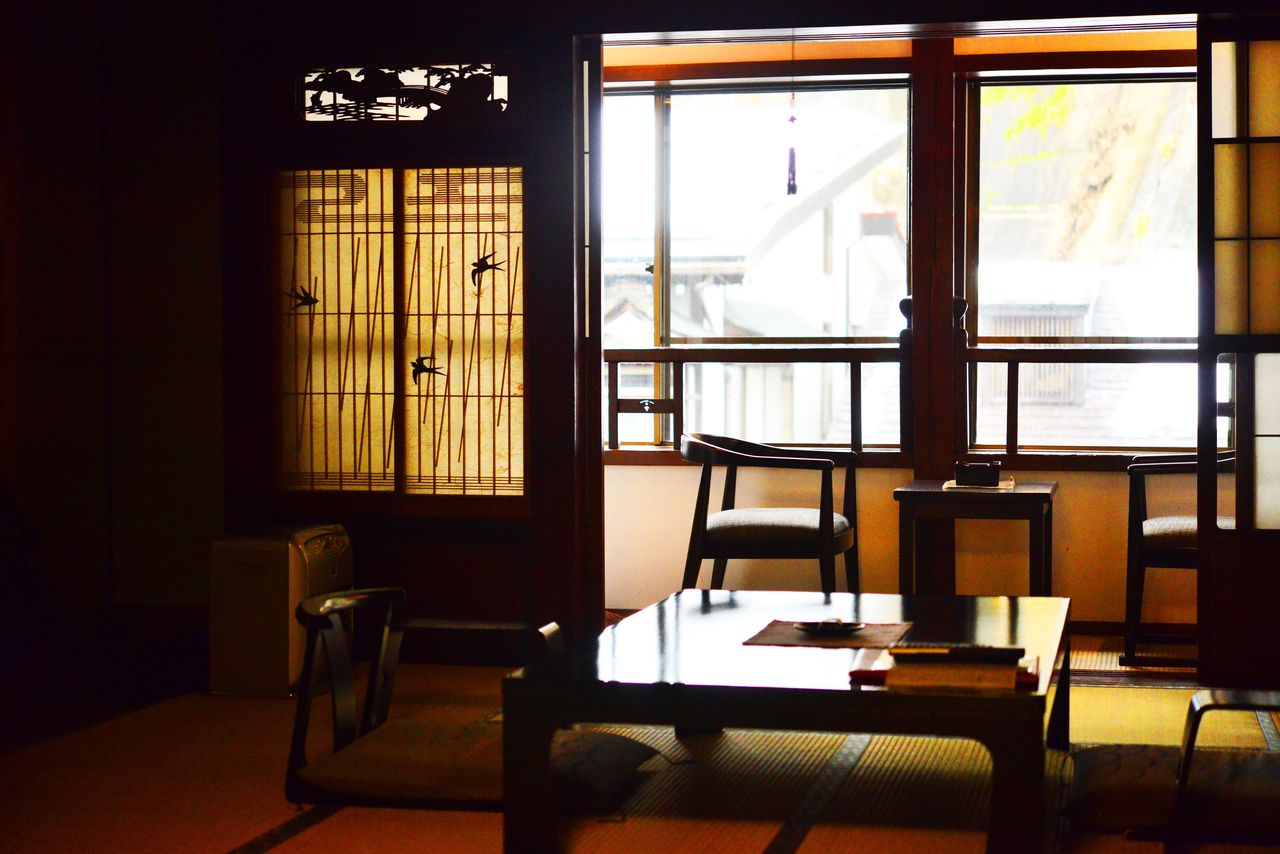 Interior: A Japanese-style room at the Notoya Ryokan. (© Shoe Press)

Inside, the wood construction of the ryokan creates a warm atmosphere that is enhanced by its hallway floorboards and staircase handrails that have been polished to an amber hue by countless hands of feet. Guests can stay in rooms in the main building, which retains its Taishō-era feel, or the more modern annex. Both buildings have spacious Japanese-style rooms where guests can pass the time in an air of elegance. 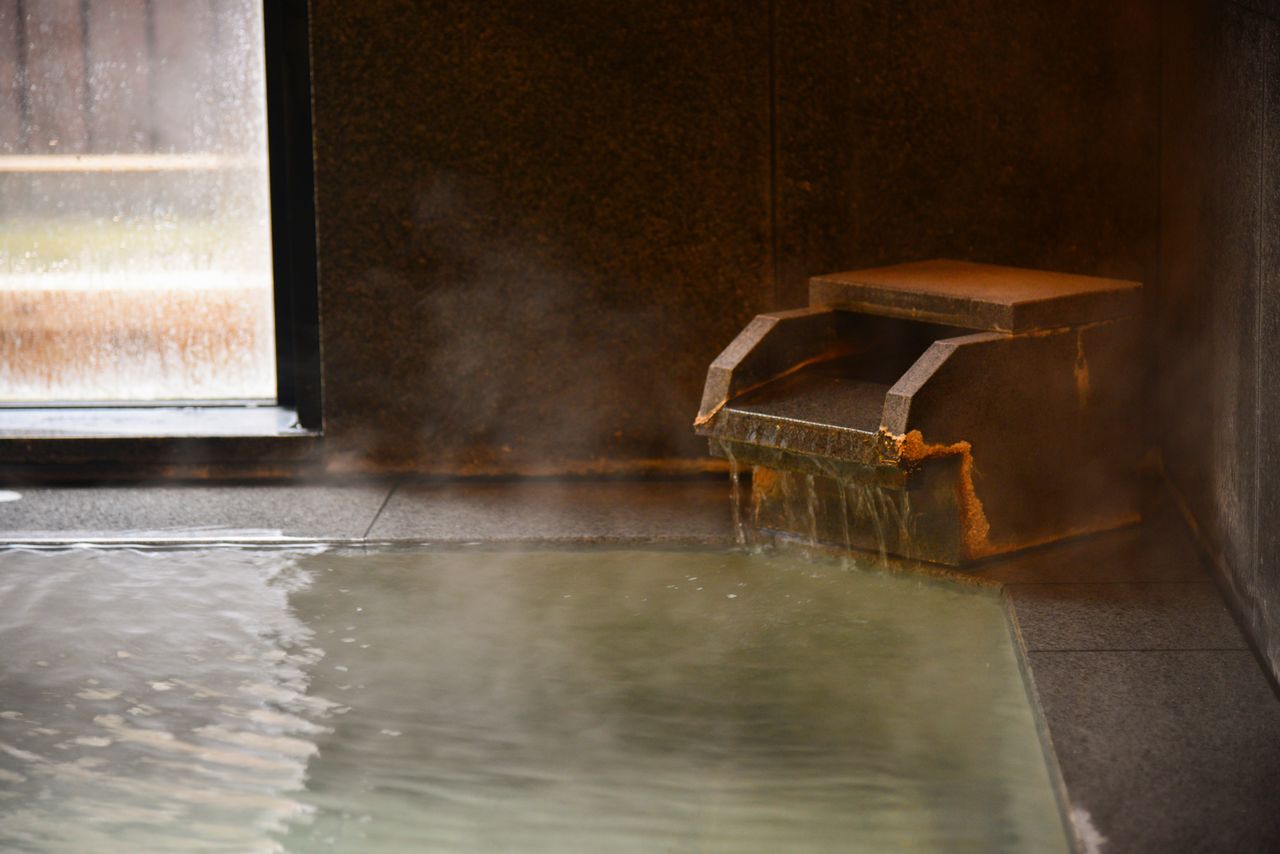 In addition to spacious men’s and women’s baths, Notoya Ryokan has an outdoor tub that overlooks the cascading waters of Shiragane-no-taki. Guests can also reserve special bathing areas, including subterranean rooms. The waters of Ginzan Hot Springs are said to be effective for treating cuts and scrapes as well as neuralgia.

The Unique Design of Shirogane-yu 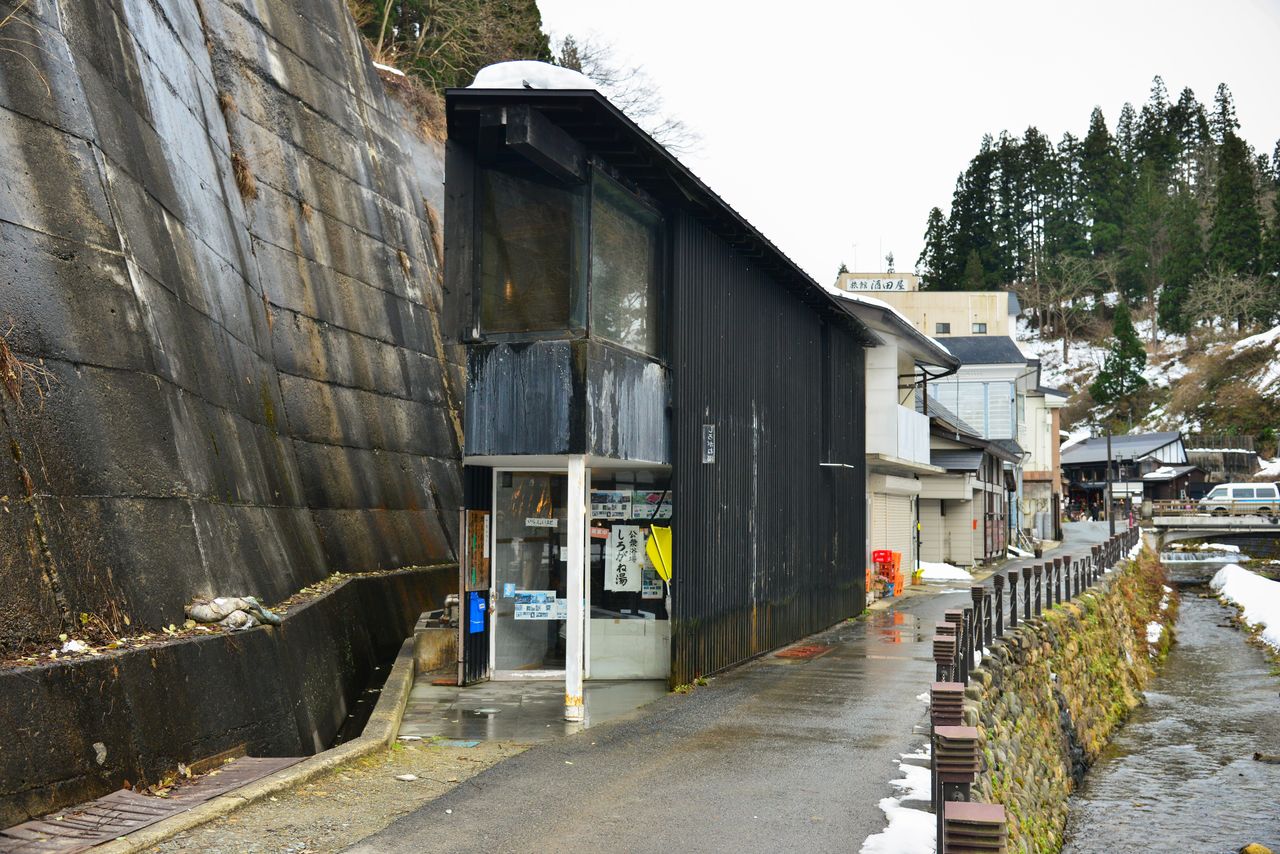 Shirogane-yu sits on a narrow strip of land. (© Shoe Press)

A short walk across the Shirogane Bridge at the entrance of the hot spring is the bath Shirogane-yu, which boasts a distinctive modern blackboard grid façade. Designed by famed architect Kuma Kengo, its unique appearance blends with the old-fashioned atmosphere of the resort area. The baths, like the building that houses them, are triangular in shape. Visitors to Shirogane-yu can enjoy a refreshing dip in hot sulfurous waters while admiring the work of a modern architecture master. 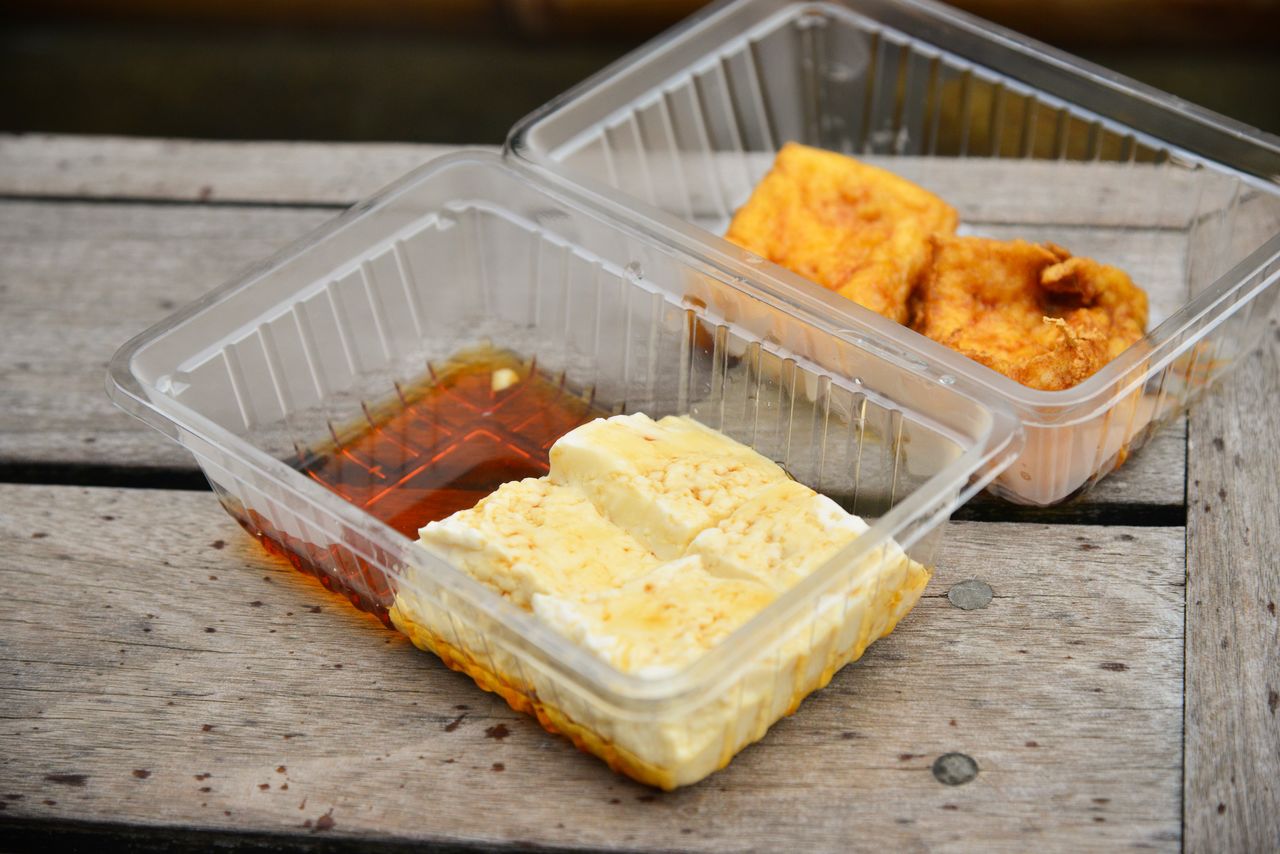 The Nogawa tōfu shop has been serving its famed dish to visitors at Ginzan Hot Springs for a century. Nogawa serves tōfu in a variety of forms, including slightly seasoned with sweet soy sauce and deep fried. Portion are perfect for eating while strolling or soaking tired feet in footbaths around the town.