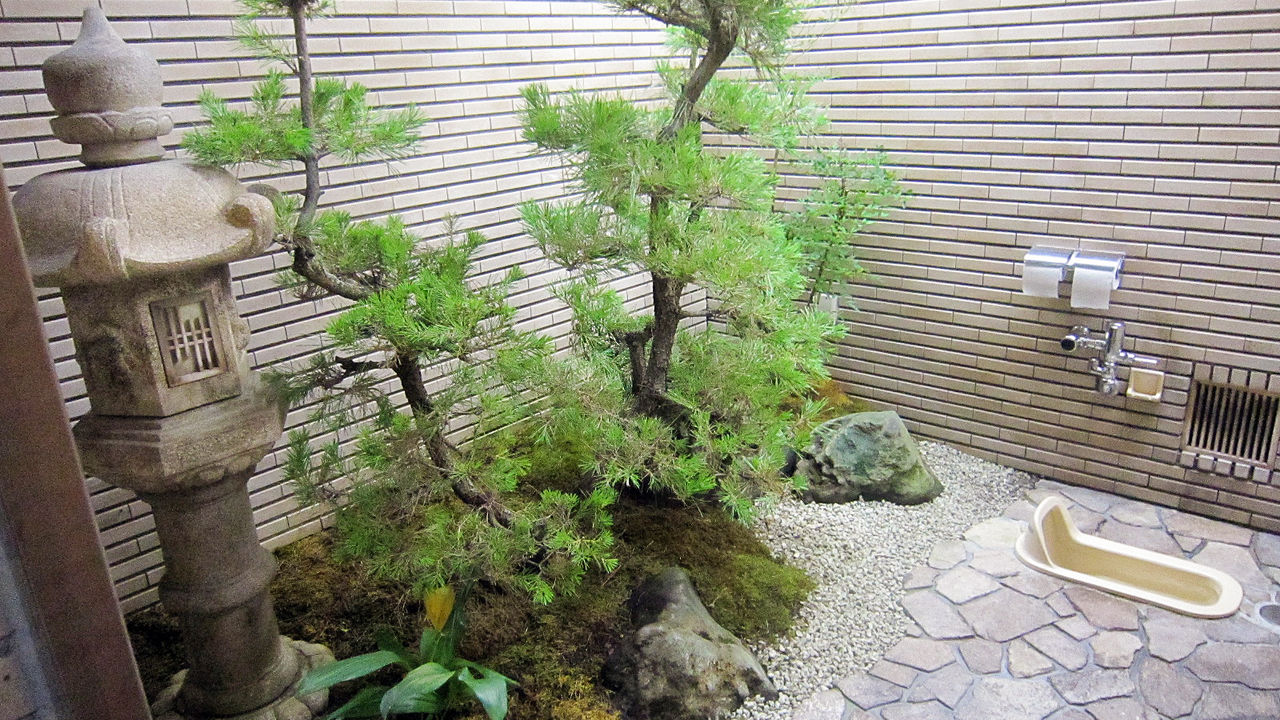 The Toilets of Japan: The Vanishing World of Japanese-Style Toilets

Jun 29, 2018
Japan is renowned for the quality of its toilets, perhaps best symbolized by its invention of toilet seats with warm water jets. In the second installation of this series, which puts the spotlight on Japanese toilets—rare and unusual restrooms, as well as customs and remarkable ideas involving the lavatory—“toilet hunter” Maritomo focuses on Japanese-style squat toilets, a declining kind.

A Brief History of Japanese-Style Toilets

When it comes to Japanese-style toilets with history, the first that springs to mind is the one in Hotel Gajoen Tokyo. This elegant hotel, formerly known as Meguro Gajoen, was also dubbed the Ryūgū—the mythical undersea palace of the dragon god—of the Shōwa era (1926–89). The 80-plus-year-old lavatory consists of a single toilet installed in one corner of a 7.4-square-meter room. It is tucked away in the Hyakudan Kaidan (100-Step Staircase) pavilion, which is only opened to the public when events are being held there. According to the hotel staff, it was probably designed for use by brides who needed an attendant to hold up the trailing wedding gown. It is a restroom befitting Gajoen’s fame as a venerable wedding venue. 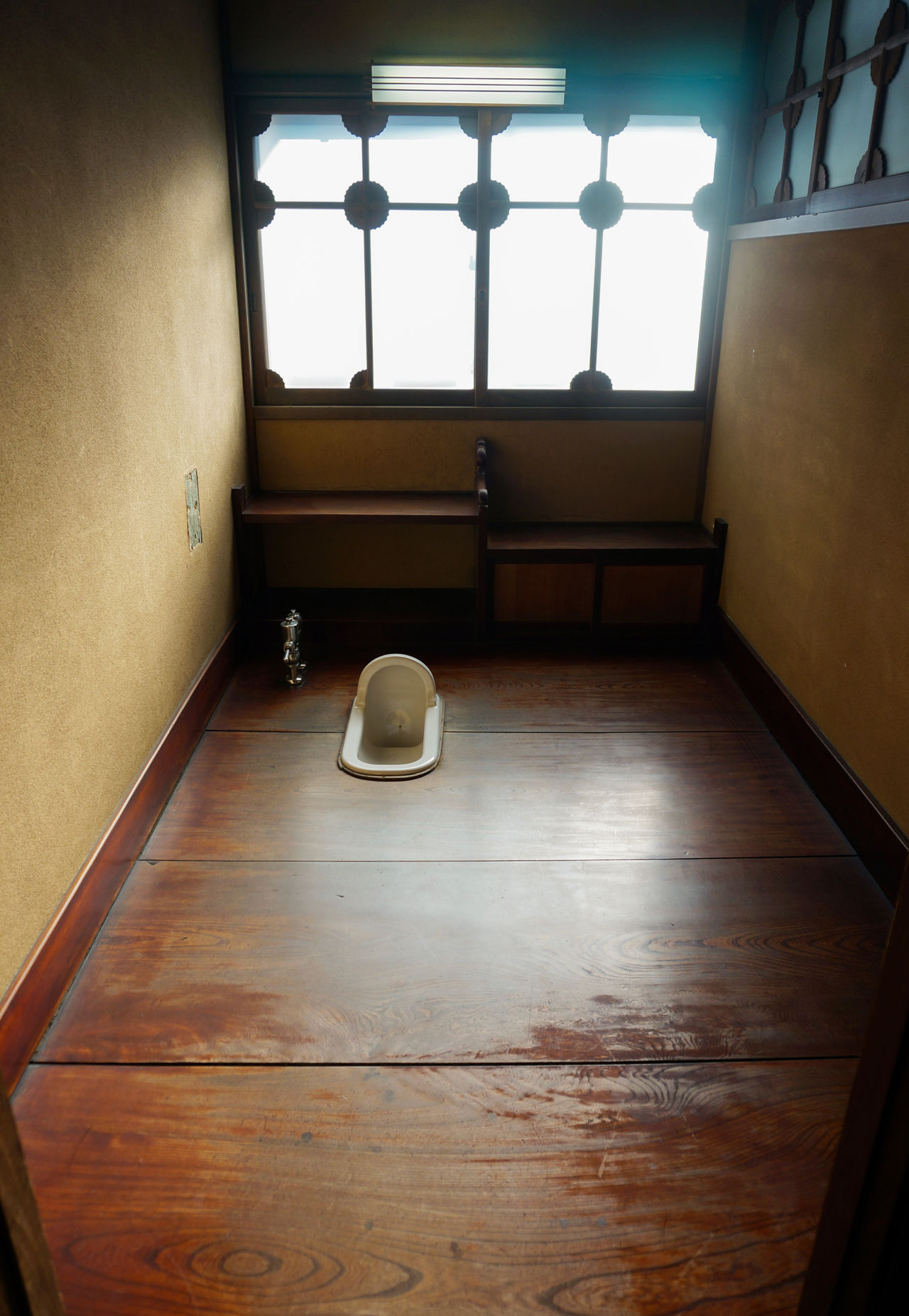 This Japanese-style toilet (closed to the public) in Hotel Gajoen Tokyo has a stall the size of a modest room. The semicircular hood on the far end of the receptacle is the kinkakushi.

Toilets of the world can be roughly classified into two types: sitting toilets, referred to as Western-style toilets in Japan, and squat toilets, including traditional Japanese-style toilets. Sitting toilets prevail in predominantly Christian regions like the United States and Europe, whereas squat toilets are common in African, Arab, and Asian countries. Japanese-style toilets are characterized by a semicircular or trapezoid hood in the front, called kinkakushi.

The roots of the Japanese squat toilet lie in the hibako, a portable toilet that first came into widespread use in the Heian period (794–1185). The kinukake at the back of this chamber pot transformed over time into the kinkakushi of the present day. Shaped like the torii gate found at the entrance to a Shintō shrine, the kinukake was where users would hang the hems of their garments to keep them from being soiled. 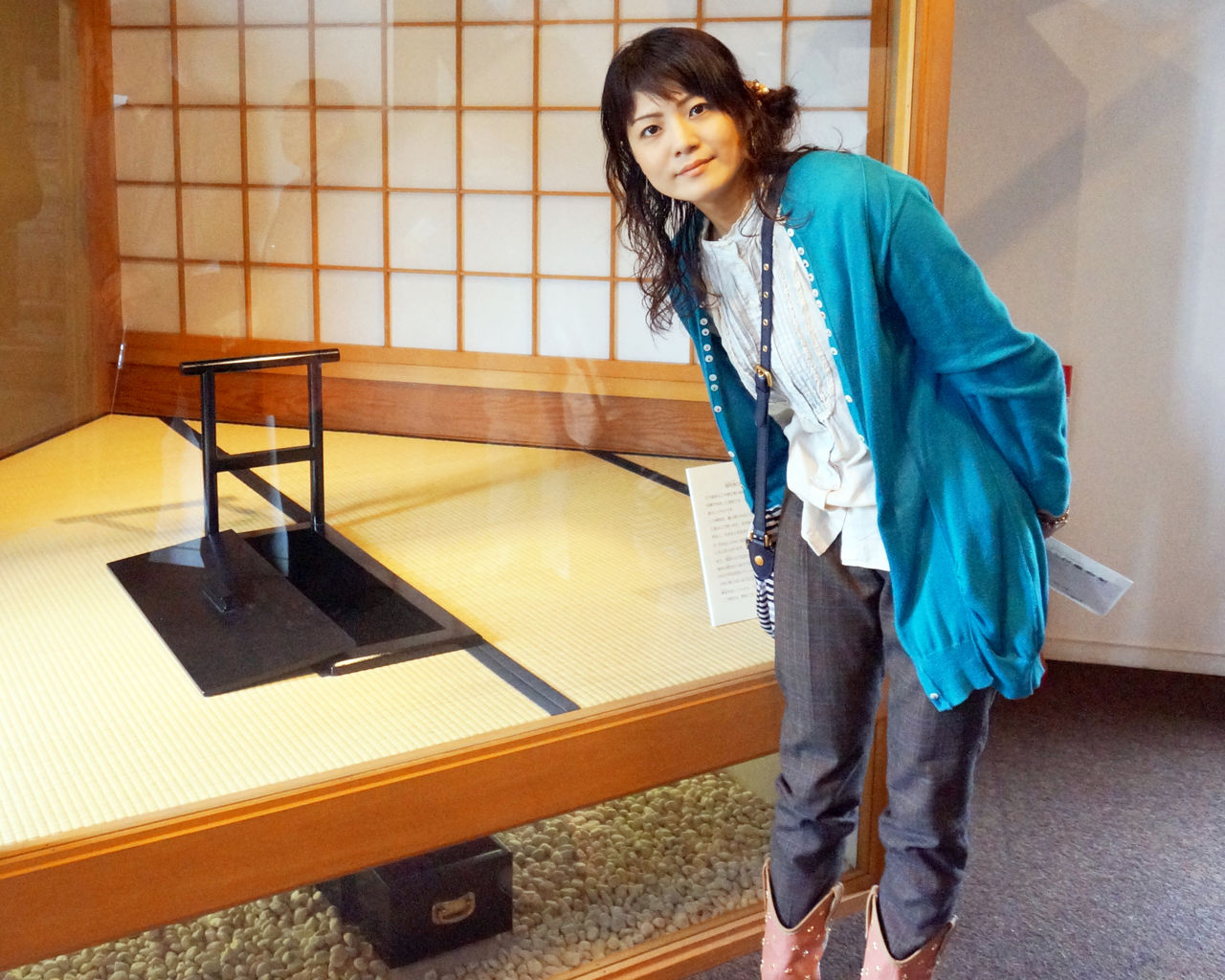 The author with a hibako. This particular pot, used by members of the upper classes, was designed so that servants could discard the waste from under the floor.

The middle of the Meiji era (1868–1912) saw the rise of sometsuke toilets, made of white ceramic decorated with blue glaze. The photograph below gives a visual idea of how kinukake evolved into kinkakushi. The former became obsolete as more and more Japanese shed their kimono in favor of Western clothes, and moving the structure to the front presumably gave it new purpose as a hood for obscuring one’s private parts and keeping urine from splashing out. The delicate artwork on the sometsuke toilets speaks to the Japanese obsession with the loo that would eventually spawn high-tech toilets. Japanese-style toilets made of ceramics, which are still in use today, came into production in the 1900s. 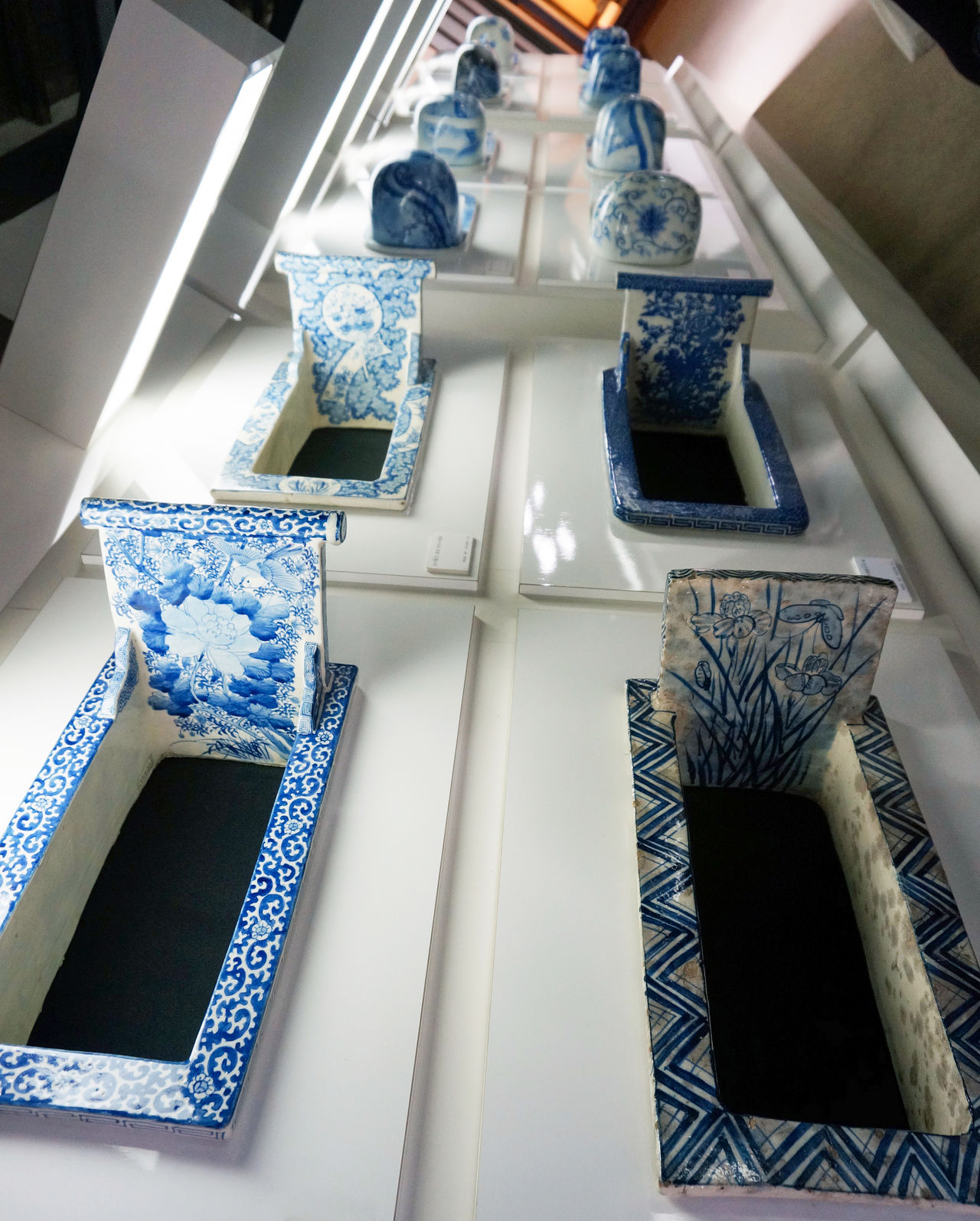 As toilets shifted from wood to ceramics, the kinukake became slab shaped before taking on the semicircular shape seen in the background.

Japanese-style toilets are expected to keep decreasing, particularly in the capital, in the run-up to the 2020 Tokyo Olympics and Paralympics. The Tokyo Metropolitan Government is proceeding with a plan to raise the percentage of Western-style toilets to 90% in stations on the municipal Toei subway lines and 80% in public elementary and junior high schools by 2020.

This policy is not just for the sake of international visitors. Most Japanese homes today have Western-style toilets, leading to a growing number of children who do not know their way around Japanese-style toilets. The aging of Japan’s society also means that more and more elderly people are avoiding traditional toilets on account of the difficulty of squatting on their feeble legs. On a number of occasions, I myself have had older ladies let me go before them in public bathrooms because they did not want to use the Japanese-style toilet stall that just became vacant.

Although Japanese-style toilets may seem to be doomed to extinction, they are not without their merits. Unlike their sitting counterparts, squat toilets allow for quick and easy bowel movements, as leaning forward in a squat with the legs apart exerts minimal pressure on the intestines and rectum. The difference in posture also shortens the time spent in the stall, speeding up the turnover rate in public restrooms. Because Japanese-style toilets involve no direct physical contact with the latrine, moreover, they are favored by germophobes who are averse to sitting on a toilet seat that has borne the bare backsides of strangers.

Given these advantages, many public facilities are considering the option of keeping some of the Japanese-style toilets in operation rather than phasing them out altogether, so as to meet diverse needs. The question is where to effectively place them and what their ratio to Western-style toilets should be.

As a “toilet hunter,” I would hate to see Japanese-style toilets go extinct. The restrooms of Resuto Ujō in Echizen, Fukui Prefecture, which I wrote about in a previous article, have the classical feel of Japanese gardens. The restaurant has seven garden toilets complete with pine trees, bamboo, and stone lanterns, and while some of them feature Western-style toilets, I have to say the ones with Japanese-style toilets are more enchanting. 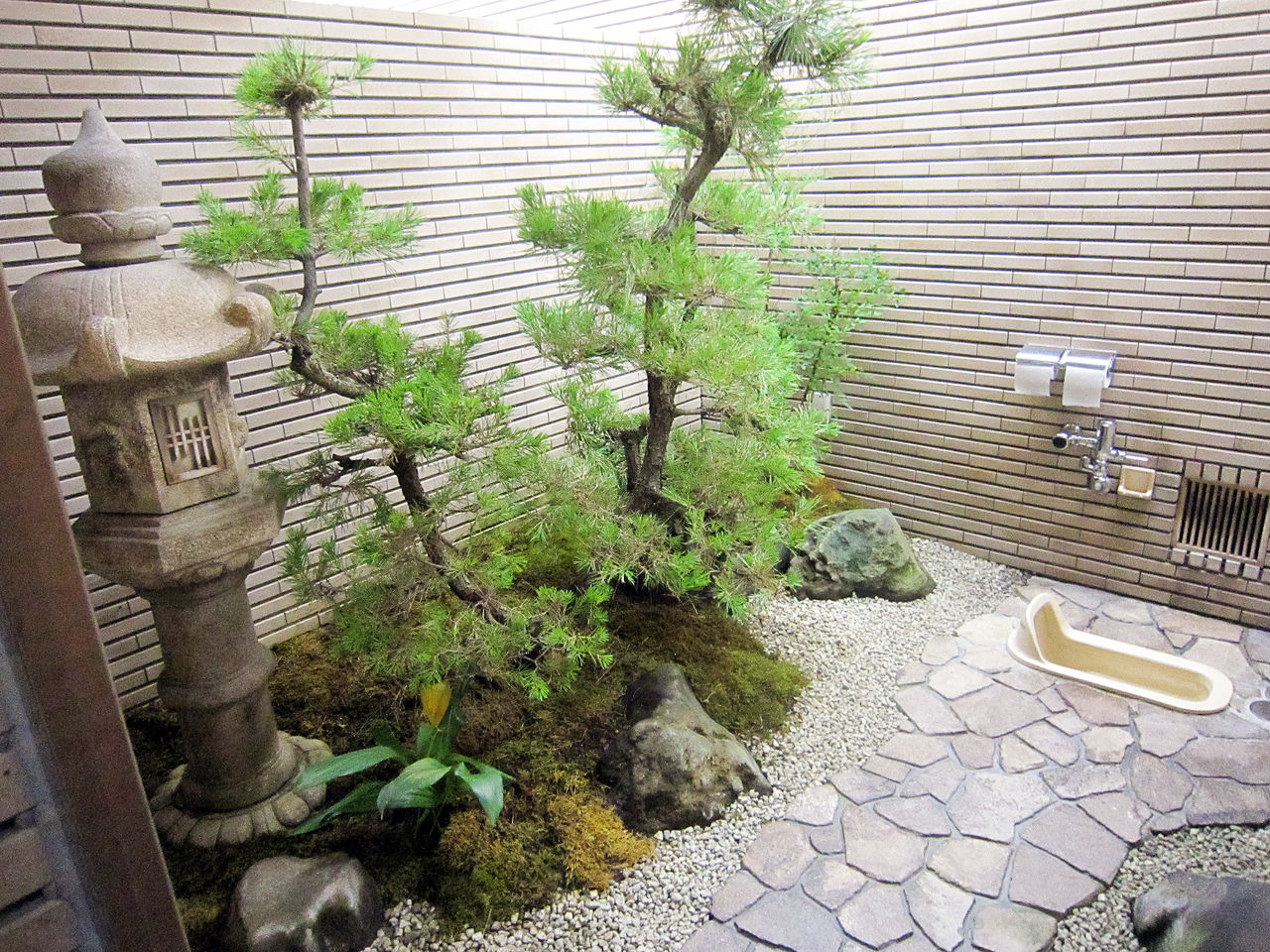 (Originally published in Japanese. All photos © Maritomo. Banner photo: The restroom of the restaurant Resuto Ujō in Fukui Prefecture.)