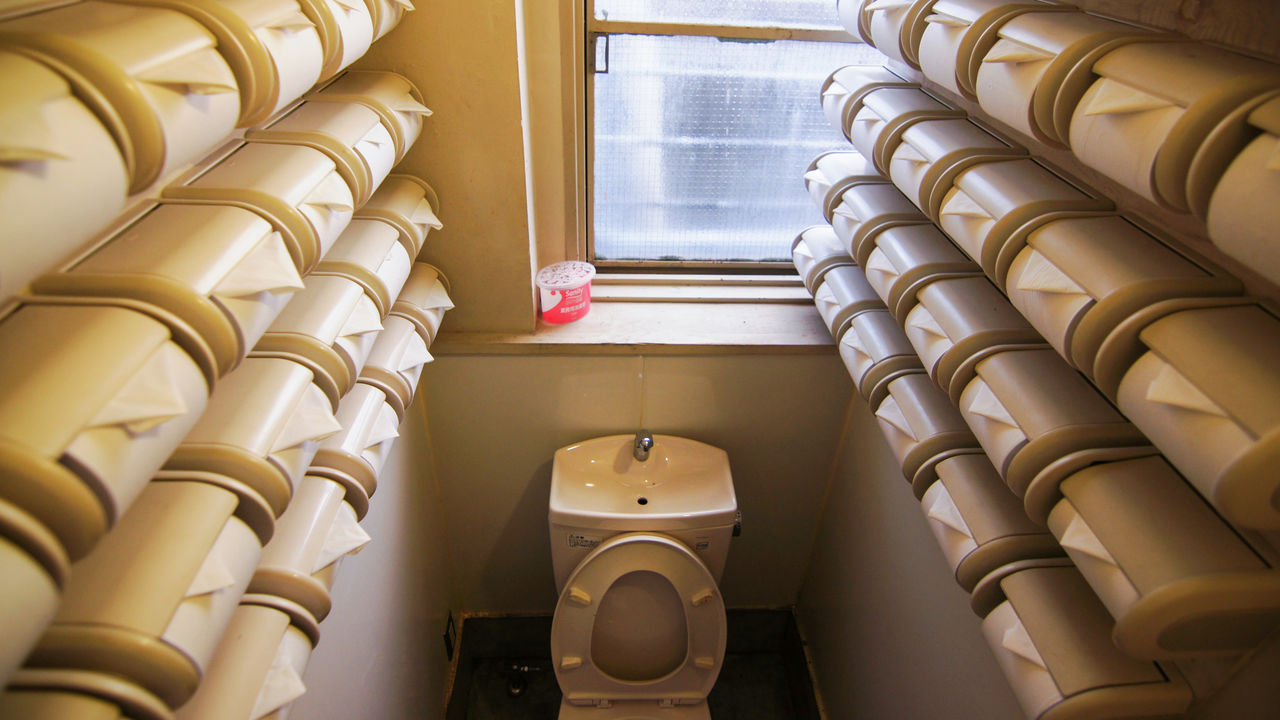 If there is one thing that’s essential to a restroom, it is toilet paper. And Japan could be said to have a comparatively favorable environment in this regard. Toilets here almost never get jammed, meaning that they can be flushed without trouble anywhere in the country. Restrooms in most public places are kept well-stocked with toilet paper, whether in hotels, train stations, department stores, or restaurants. One need hardly ever worry about needing to have tissue paper on one’s person for the purpose. Some places have two toilet paper holders and abundant replacement rolls per toilet stall. 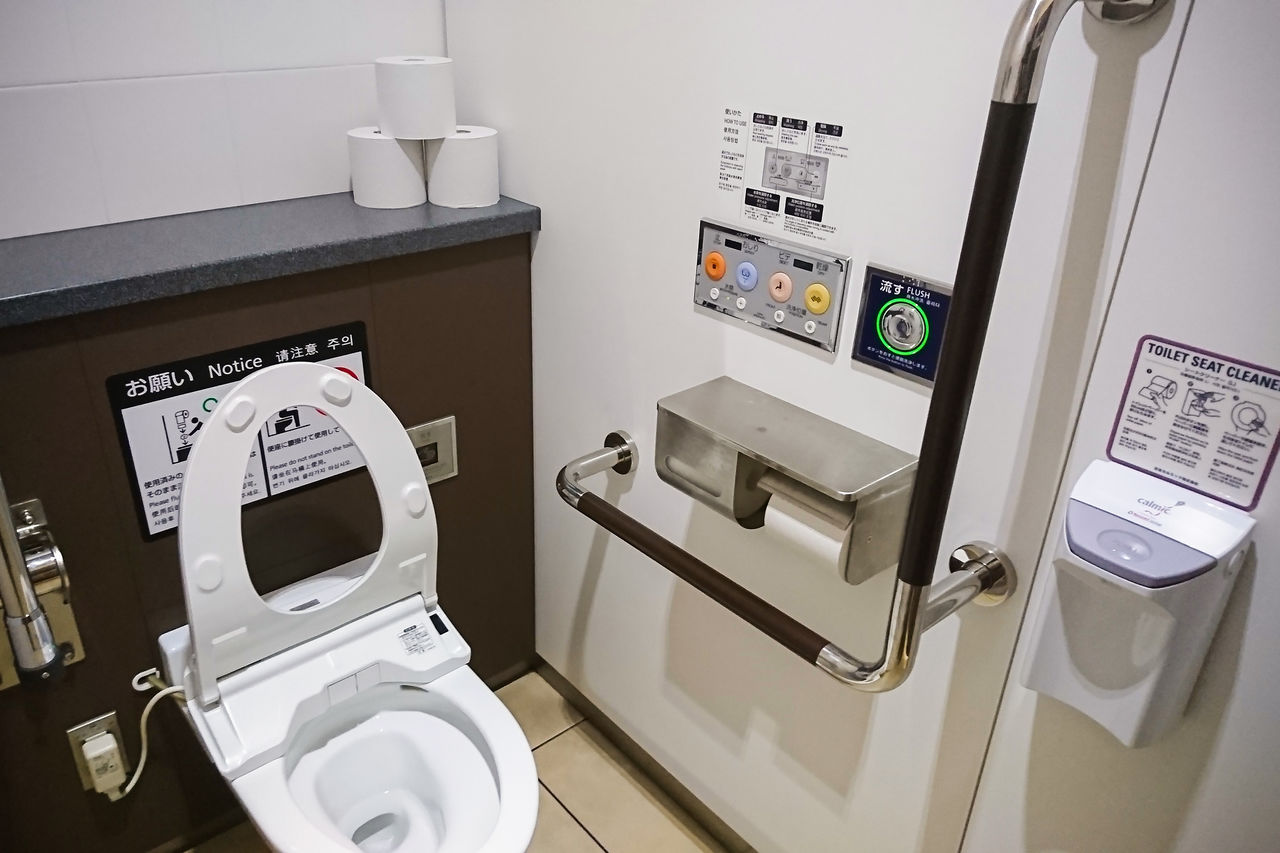 An airport toilet stall. In addition to the warm-water bidet toilet, note the two toilet paper holders (one of which is in reserve) and the three replacement rolls of toilet paper.

One may also find establishments which, owing perhaps to Japanese fastidiousness, have overstocked on replacement toilet paper rolls so as to ensure they don’t run out. An extreme example of this phenomenon can be seen in the restrooms at Momojirō, a drinking establishment on Imadegawa-dōri near the Hyakumanben intersection in Sakyō-ku, Kyoto.

80 toilet paper holders cover one wall of the women’s restroom, and two walls of the men’s restroom are similarly covered with toilet paper holders. And the leading end of each and every roll in the place has a triangular fold. While the intent may have been to reassure customers that there would be no possibility of ever running out of toilet paper in either restroom, such large quantities instead feel oppressive and make it hard to relax. 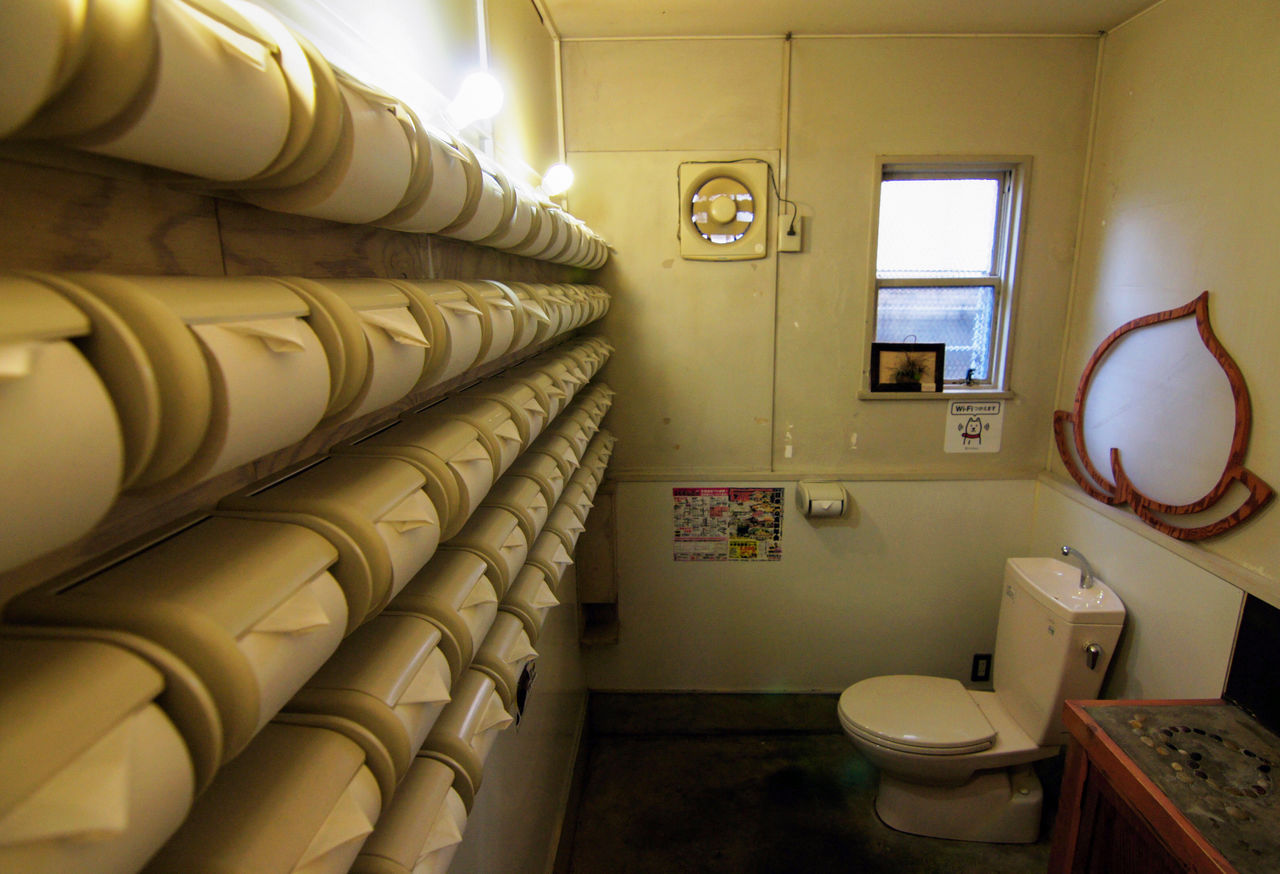 The women’s restroom at Momojirō. It may seem hard to choose, but most people probably would use the roll to the right of the toilet.

According to the staff, an input error when ordering toilet paper holders resulted in these large quantities being delivered to them by mistake. On a whim, they decided to install them all anyway. Customers seemed to like it. The staff report that people have even begun coming there specifically to see the restrooms.

The Psychology of Toilet Paper

In Japan, one frequently sees toilet paper with triangular folds, as in the Momojirō restrooms.

While this practice can be seen in hotels or high-class restaurants in other countries, Japan is probably unusual for the degree to which it has become typical even in office buildings or typical households. While many view it in terms of the spirit of Japanese hospitality, in recent years public discussion has been stirred up in Japan as to whether it might be unhygienic in some situations.

In hotels and other accommodations, for example, the triangular fold signifies that a restroom has been recently cleaned. But what if such folds were made, not by cleaning staff, but by the person who last used the toilet? One could well imagine that some persons would not want such handling, however heartfelt, from someone who hadn’t yet washed their hands.

Last year, there was considerable commotion online about a notice posted in hospital restrooms which read, “Please do not make triangular folds in toilet paper rolls.” The reason, naturally enough, was that doing so could cause contamination to spread. It would seem that it would not be appropriate in all times and places demonstrate the spirit of hospitality. 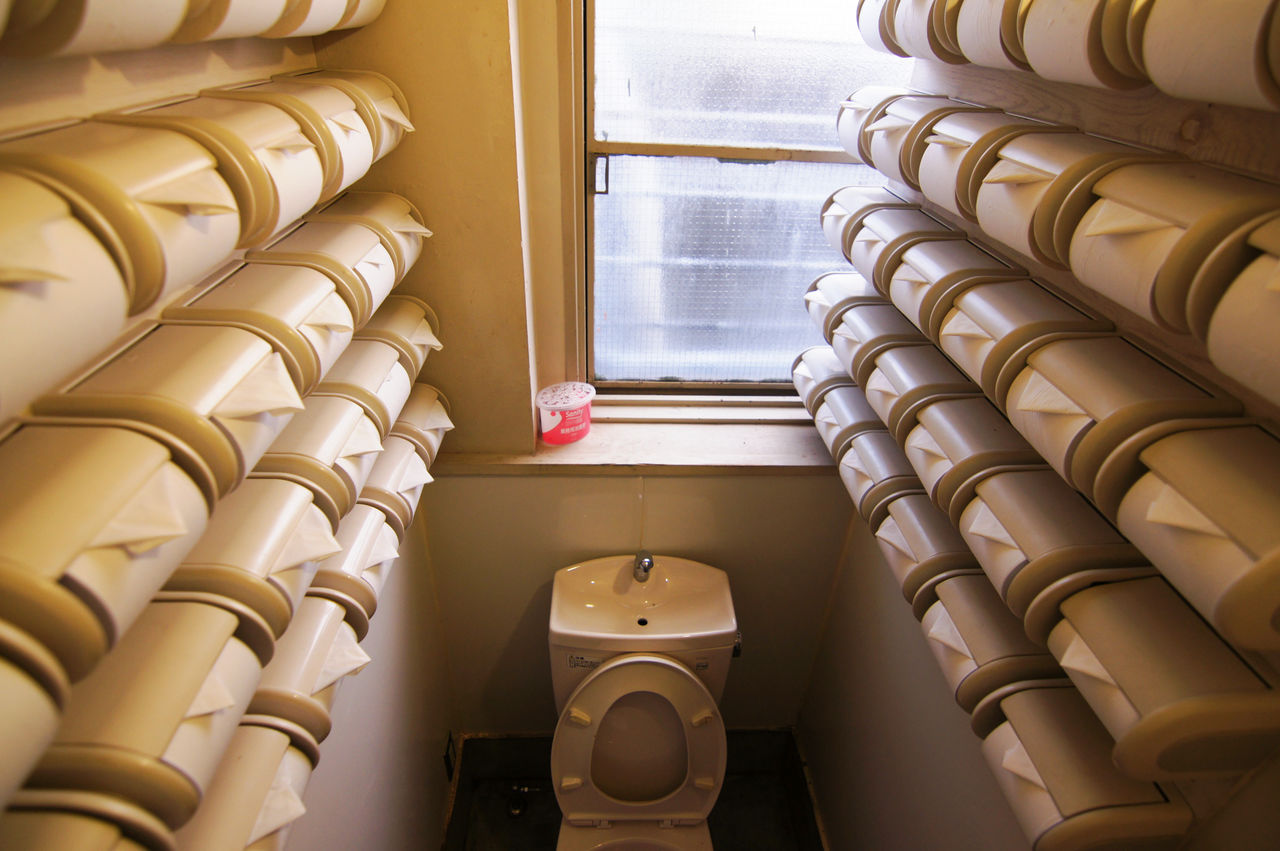 The men’s restroom. The staff say they periodically make the triangular folds for the benefit of customers who want to take pictures.

This past spring, the Matsumoto Kiyoshi drugstore chain made waves when it began selling a new kind of toilet paper. 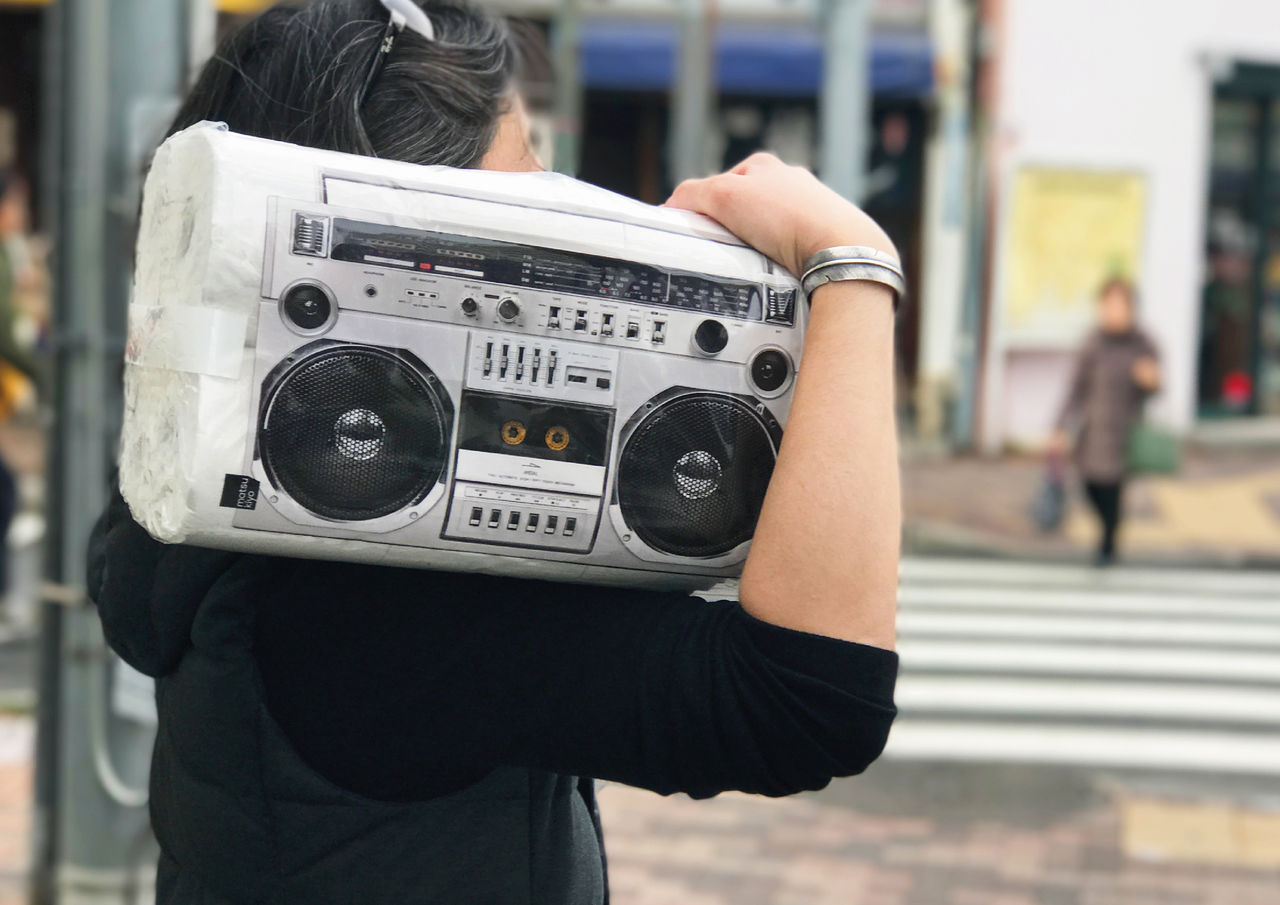 This boom-box packaging looks oddly appropriate over the shoulder, with stacks of three rolls rather than two. (Courtesy Matsumotokiyoshi Holdings Co., Ltd.)

However essential toilet paper might be, there are still some people who get bashful about buying and carrying rolls around in public. What this company has done is design toilet paper packages to look like boom boxes or shopping bags, to turn this negative sentiment into a sense of pleasure at being seen instead.

These products have been noticed outside Japan as well, receiving such awards as the iF Design Award in Germany and the British D&AD Award for creativity. Maybe my desire to replace the stigma around toilets with a more positive image is more universal than I thought. 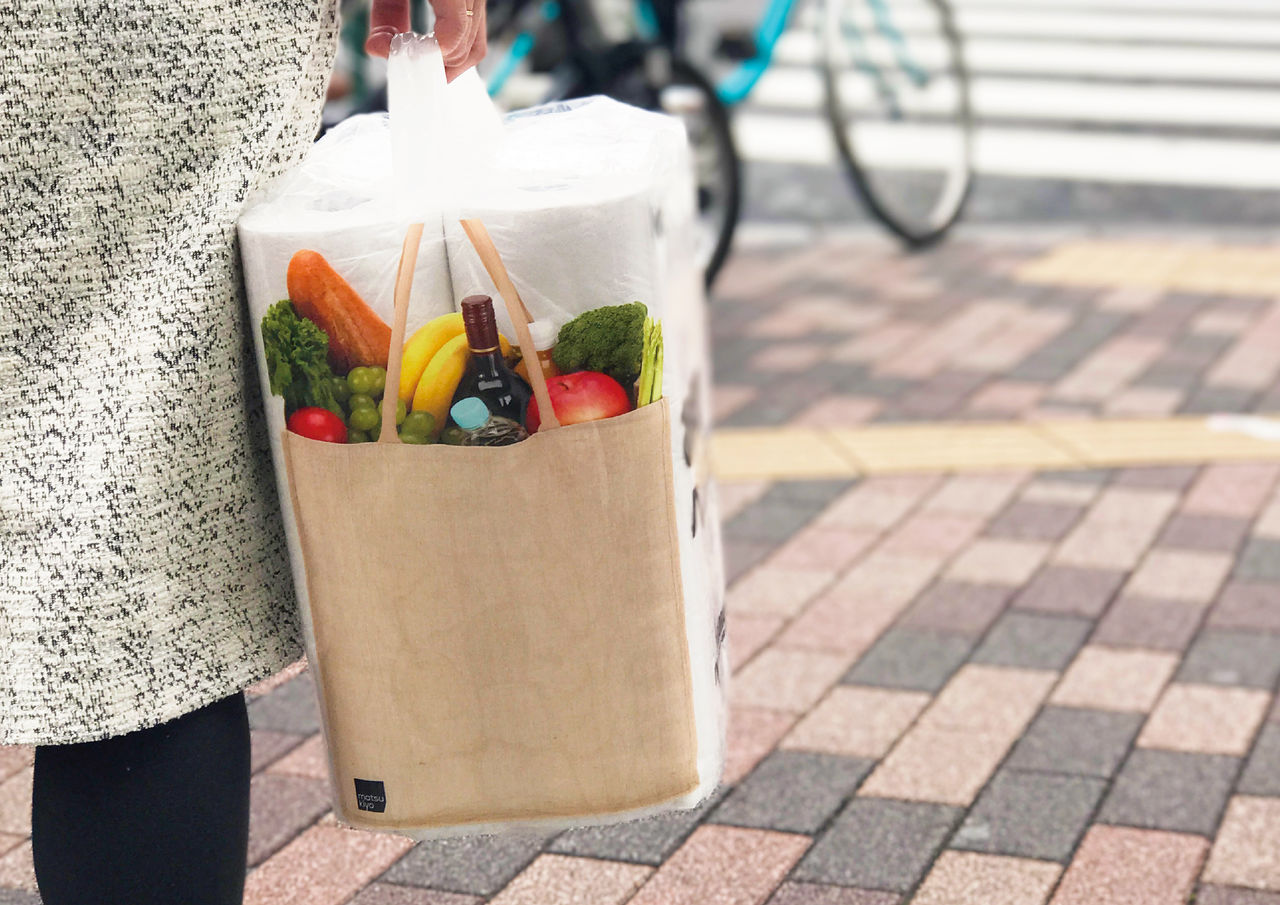 This shopping bag-design package is practically guaranteed to make onlookers do double-takes. Part of the Matsumoto Kiyoshi in-house brand, it is available for ¥278 including tax. (Courtesy Matsumotokiyoshi Holdings Co., Ltd.)