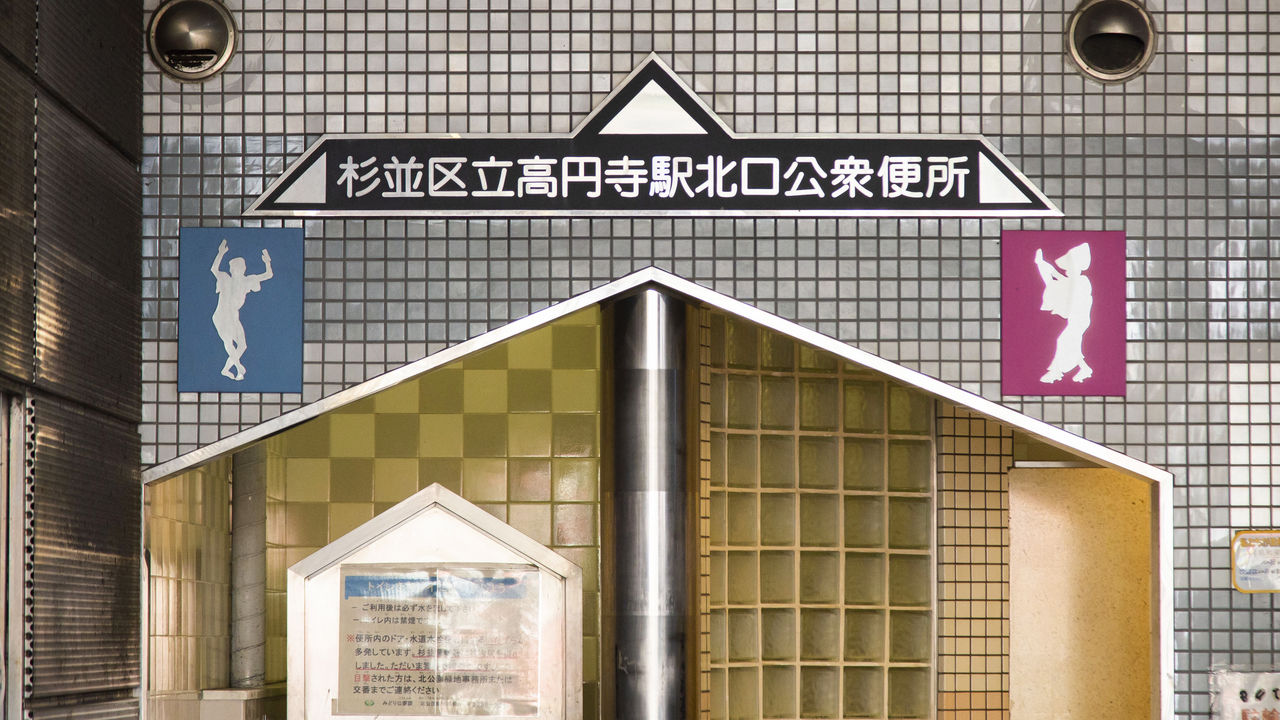 Jan 7, 2019
Japan’s high-tech toilets, with their warm water jets, heated seats, and self-cleaning functions, are considered among the best in the world. In this article, one of a series on Japan’s unique toilets, the author takes a close look at public toilet signage and the array of symbols on high-tech toilet control panels.

One of the first things many people do when they come to a new place is to check for the toilet locations. Rather than looking for signs with the word “Toilet,” however, most Japanese search for a pictogram of two red and blue figures. 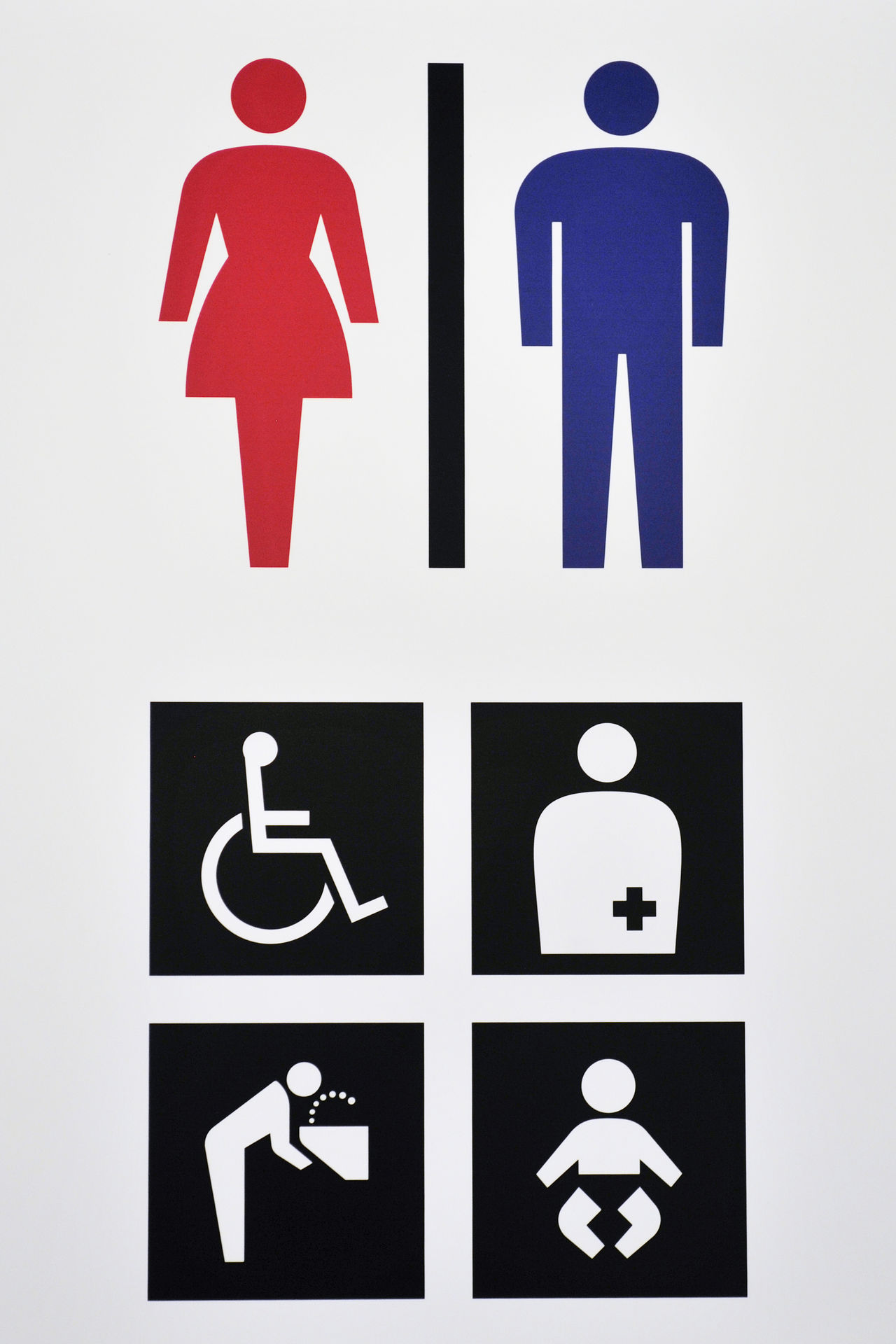 The toilet signs at the Haneda International Airport use the JIS, or Japanese Industrial Standard, symbols shown above. Like similar toilet pictograms recommended by the American Institute of Graphic Arts and the International Organization for Standardization, the male figure is blue and wearing pants while the female figure is red and wearing a skirt. Though the Japanese pictograms seem to conform to de facto international standards, however, this does not necessarily mean they are universally understood. Even in other countries where similar images are used, the pictograms are often presented in black and white, and the meaning of the colors is not immediately apparent to all foreign visitors to Japan.

Pictograms began to be used for public facilities in Japan around the time of the 1964 Tokyo Olympics to accommodate the onslaught of foreign visitors who could not be expected to understand signs written in Japanese. Much thought was put into designing the pictograms so that they would be universally understood. Using colors to distinguish male and female was one important design element at the time. 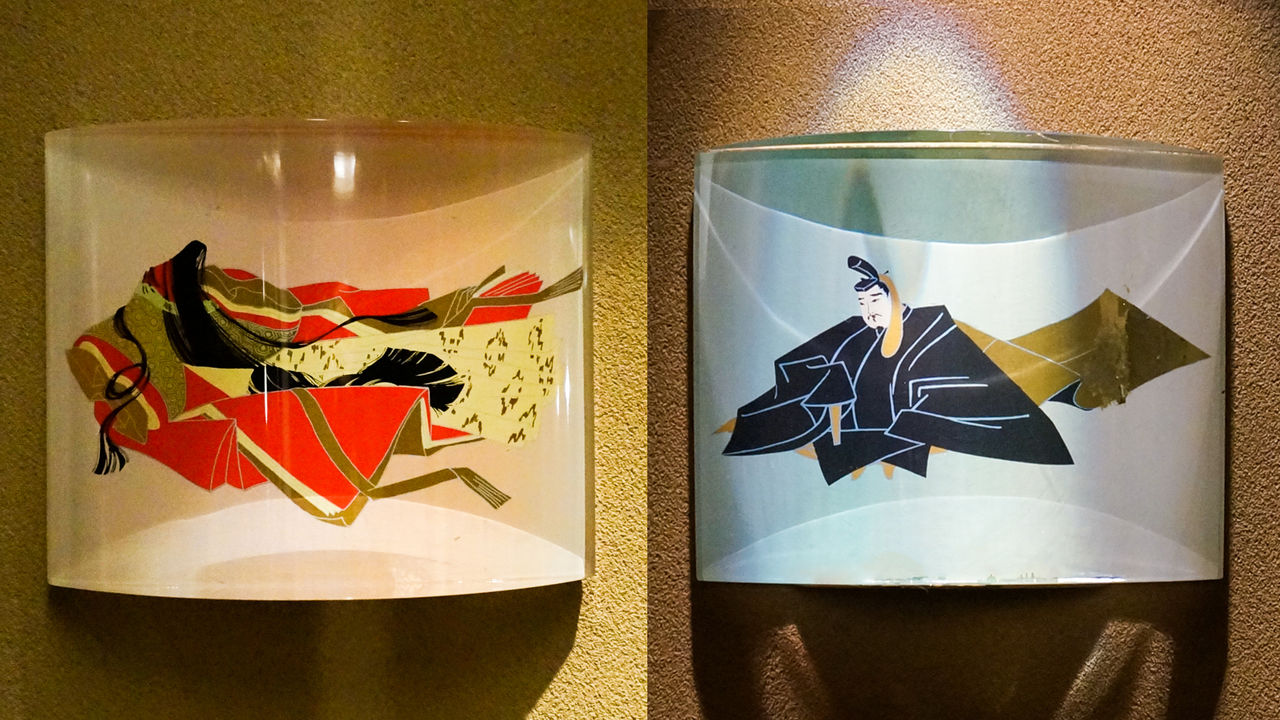 Toilet signs at the Hotel Gajoen Tokyo. With its traditional gardens and elegant setting, this hotel is often compared to Ryūgū-jō, the undersea palace of Japanese folklore. Pictograms of simplified human figures in pants and skirts would be inappropriate to this setting of timeless elegance. 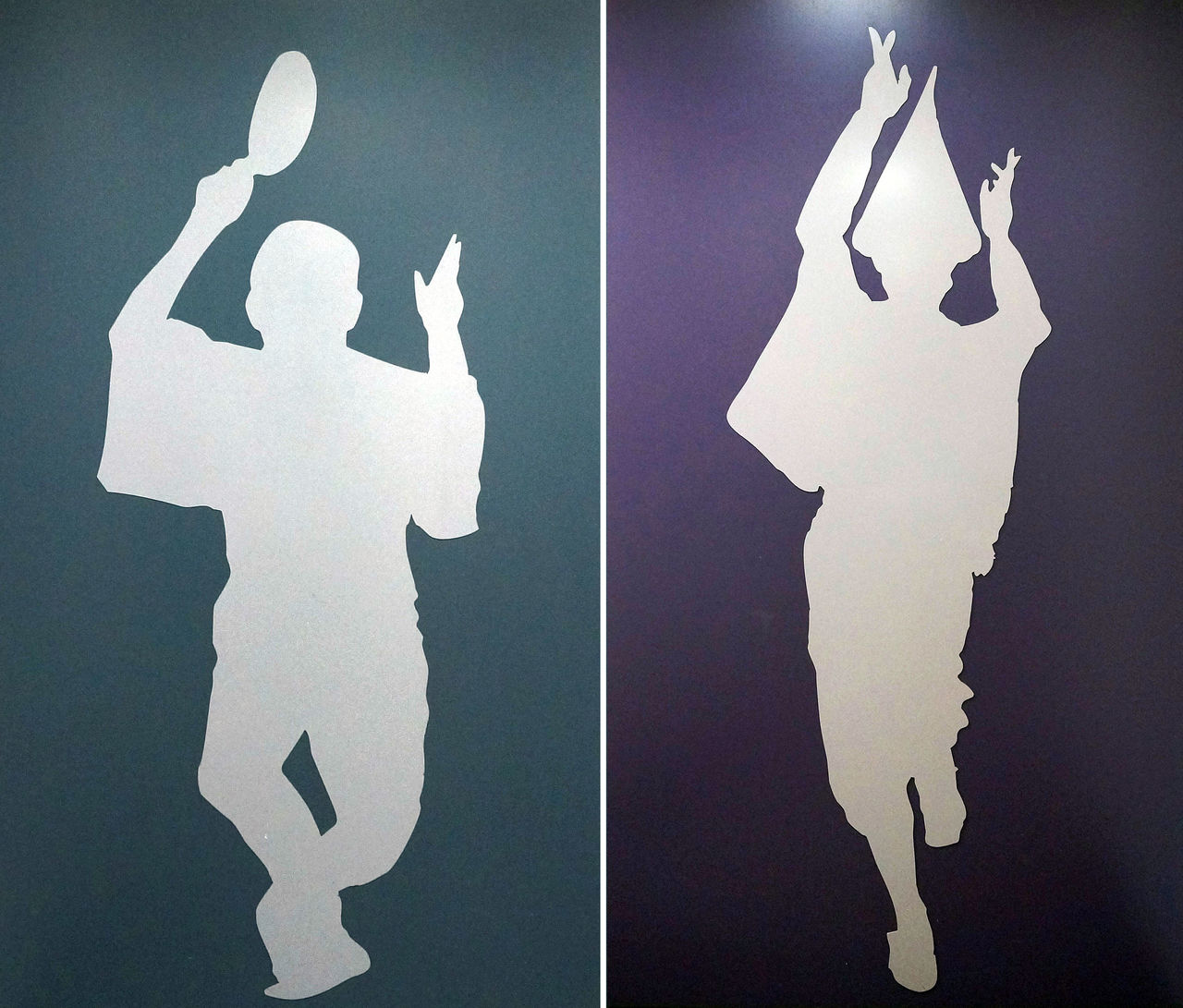 Tokyo’s Kōenji district is famous for its summer awa odori dance festival. The toilets at the Kōenji train station show male and female dancing figures. The banner photo shows the entranceway to the public toilets under the elevated Kōenji Station train tracks. Here, too, male and female dancing figures are depicted with no signs indicating that they mark a public toilet entrance.

In fact, color-coded pictograms may have become too much the norm in Japan, where public toilet signs can be excessively small and discreet. It can be hard to find public toilets these days marked “Toilet,” “Men,” and “Women,” or the equivalents in Japanese. For many Japanese, the colors, rather than the pictograms, are the deciding factor, and not a few establishments have no signs at all, just doors and entranceways colored blue or red. Visitors who are uncertain what the pictograms and color codes mean may be in for a hard time when they need to find a restroom.

Tokyo will soon be hosting the 2020 Summer Olympics and Paralympics, and recently Osaka was selected to host the 2025 World Exposition. After more than 50 years of use, Japan’s toilet signage needs to be changed to accommodate users who may not grasp the significance of the conventional color codes or who may be colorblind. Some places are already taking the lead by introducing monochrome pictograms and words.

There is also a movement to introduce gender-neutral toilets that can be used by anyone. In Tokyo’s Shibuya, one of the first municipalities to issue same-sex partnership certificates providing some of the same rights as a marriage certificate, the municipal office annex toilets have rainbow colored signage reminiscent of the LGBT movement’s multicolored flag. New gender-free toilet signage depicting a figure wearing pants on one side and a skirt on the other can be found at places like the Mega Don Quijote discount shop in Shibuya, as well as in hotels in Kyoto catering to ever-increasing numbers of foreign tourists. 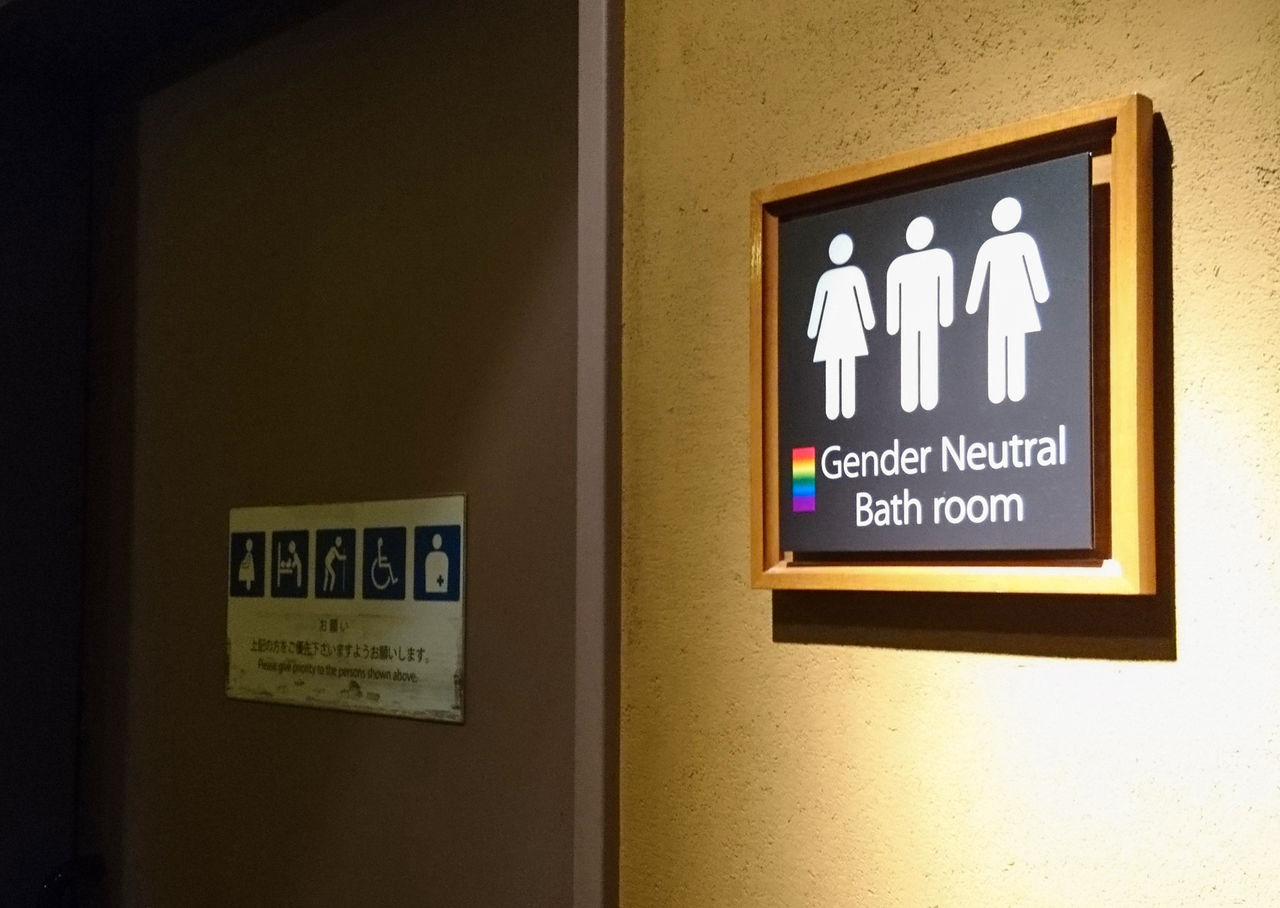 The gender-neutral sign at the Hotel Granvia Kyoto. (© Jiji Press)

So-called multipurpose toilets designed to be used by the a wide range of people, from the disabled to parents with small children, are another common sight in Japan. As their numbers have increased, though, the toilet control panels in them have become increasingly complex. I have seen many different kinds of toilets in Japan, but even I have trouble sometimes figuring out which is the “flush” button! Fortunately, all toilets manufactured since 2017 use the same control panel symbols. Hopefully, as our international guests come to recognize these symbols, they will have a more comfortable experience using Japan’s high-tech toilets. 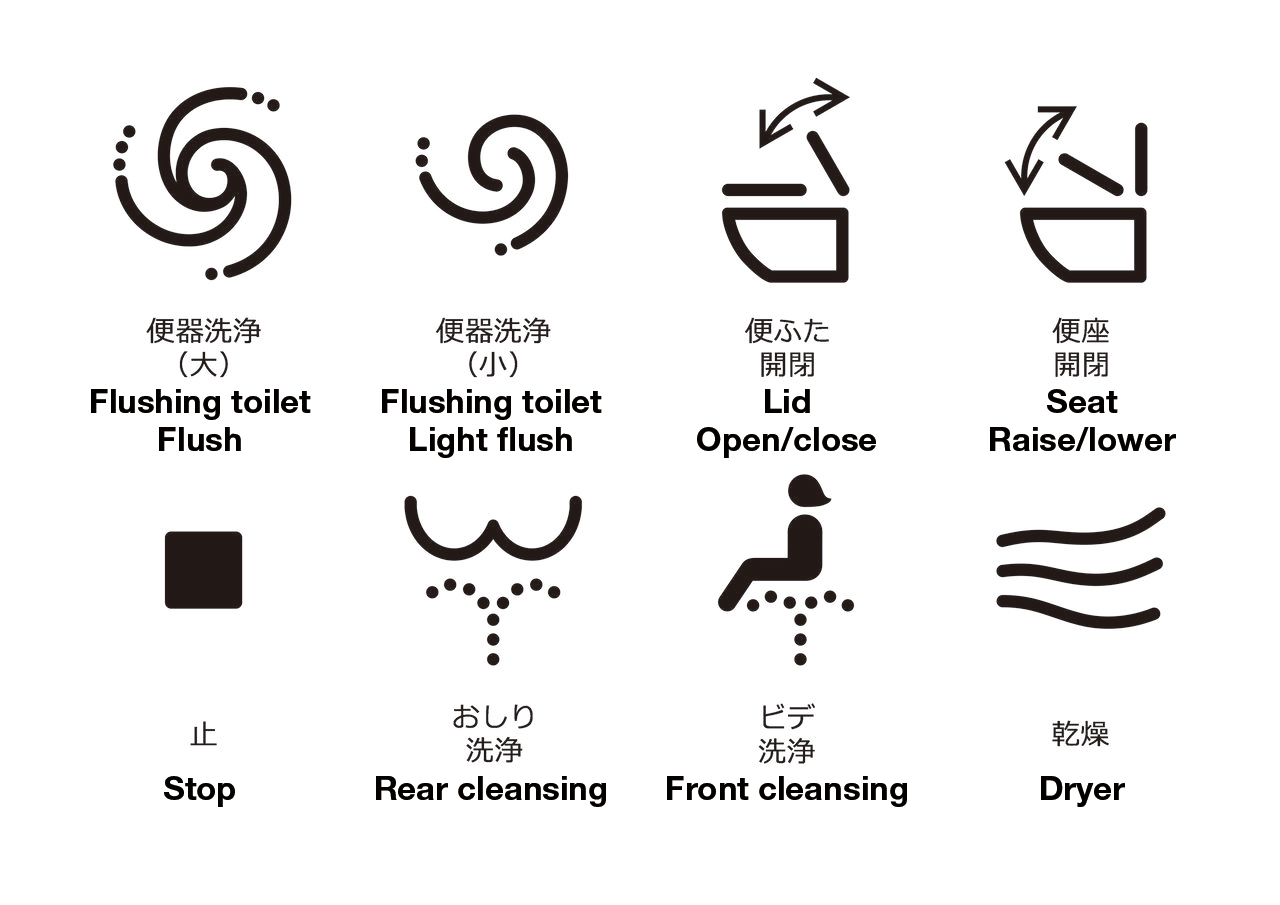 Uniform toilet signage and control panel symbols are symbolic of a kinder toilet culture open to everyone. That is indeed a wonderful thing. But for a “toilet hunter” like myself, who delights in finding unique toilet signage, it is a little disappointing. 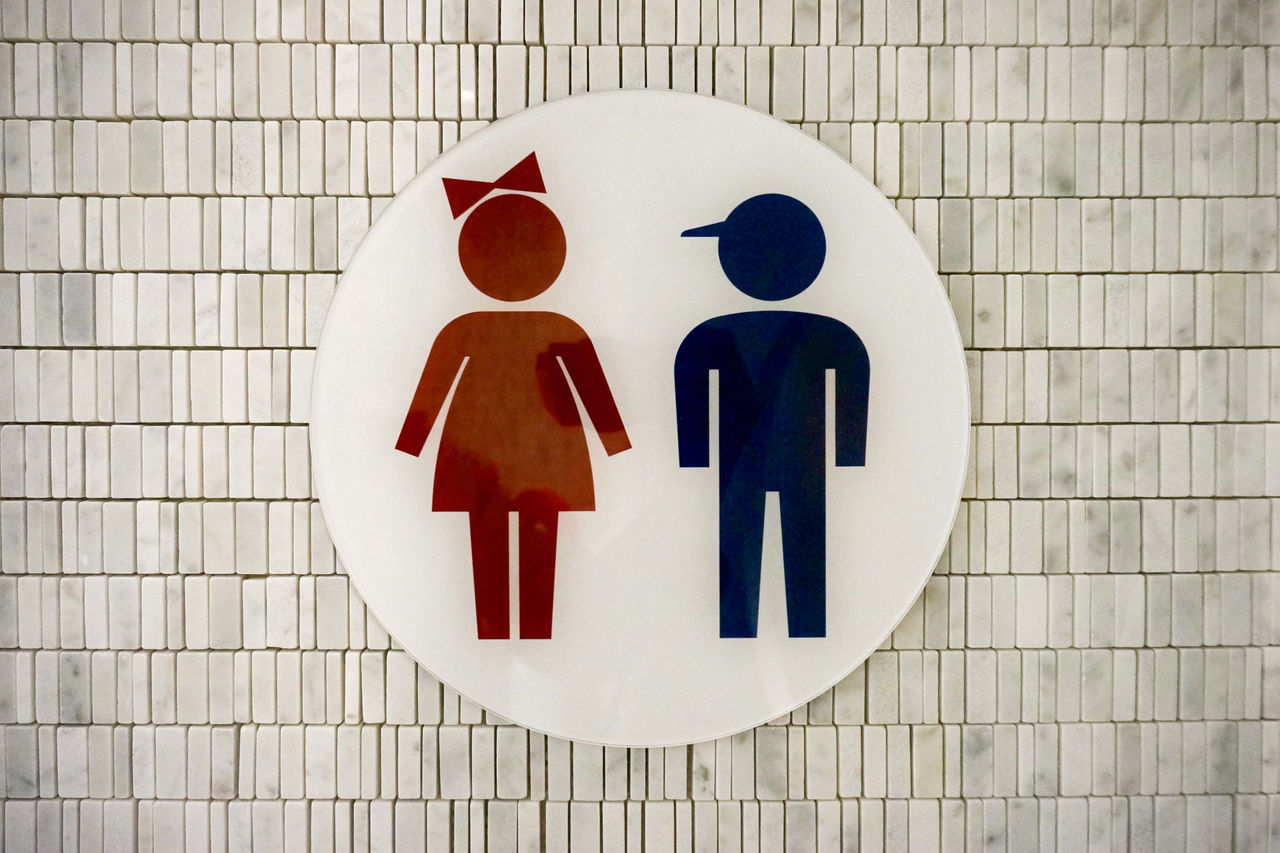 A children’s toilet sign discovered at Narita International Airport. Playful signs like this have a special appeal.