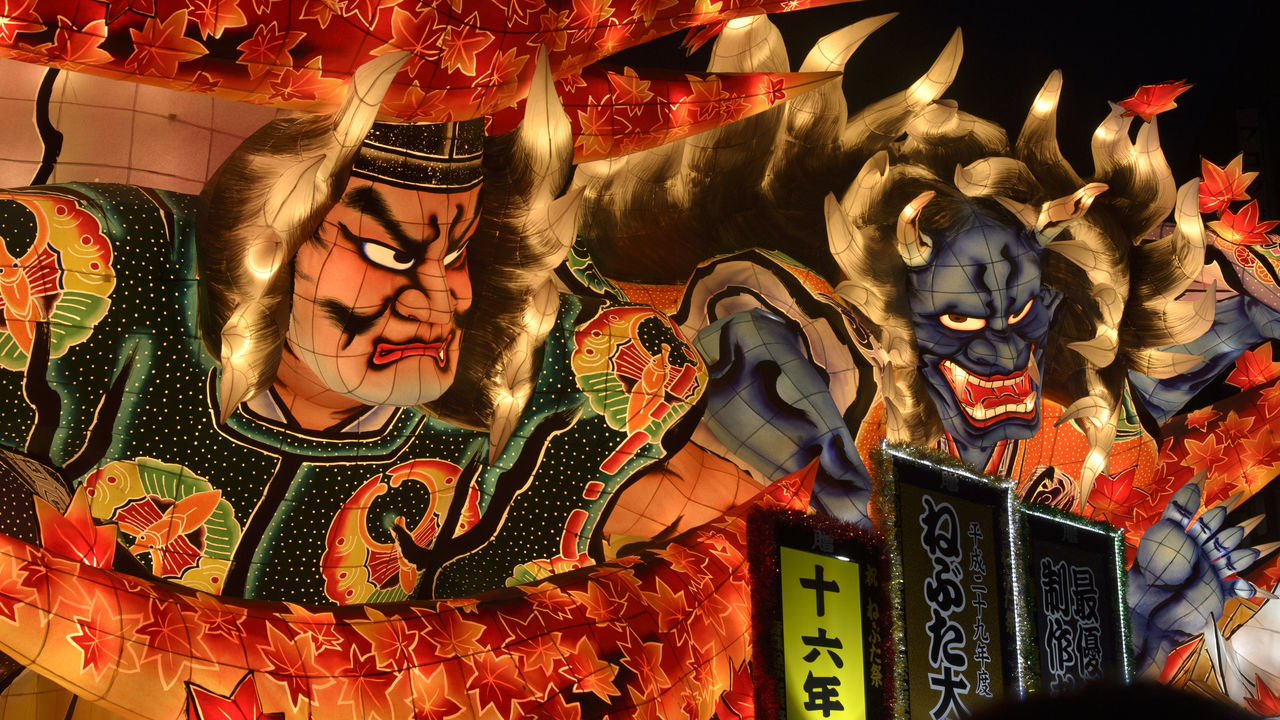 May 26, 2018
The Aomori Nebuta Matsuri, Japan’s largest summer festival, features parades of massive, brightly lit floats glittering against the night sky, surrounded by throngs of cheerful jumping dancers. Visitors can dress in the dancers’ costumes to join in the fun. 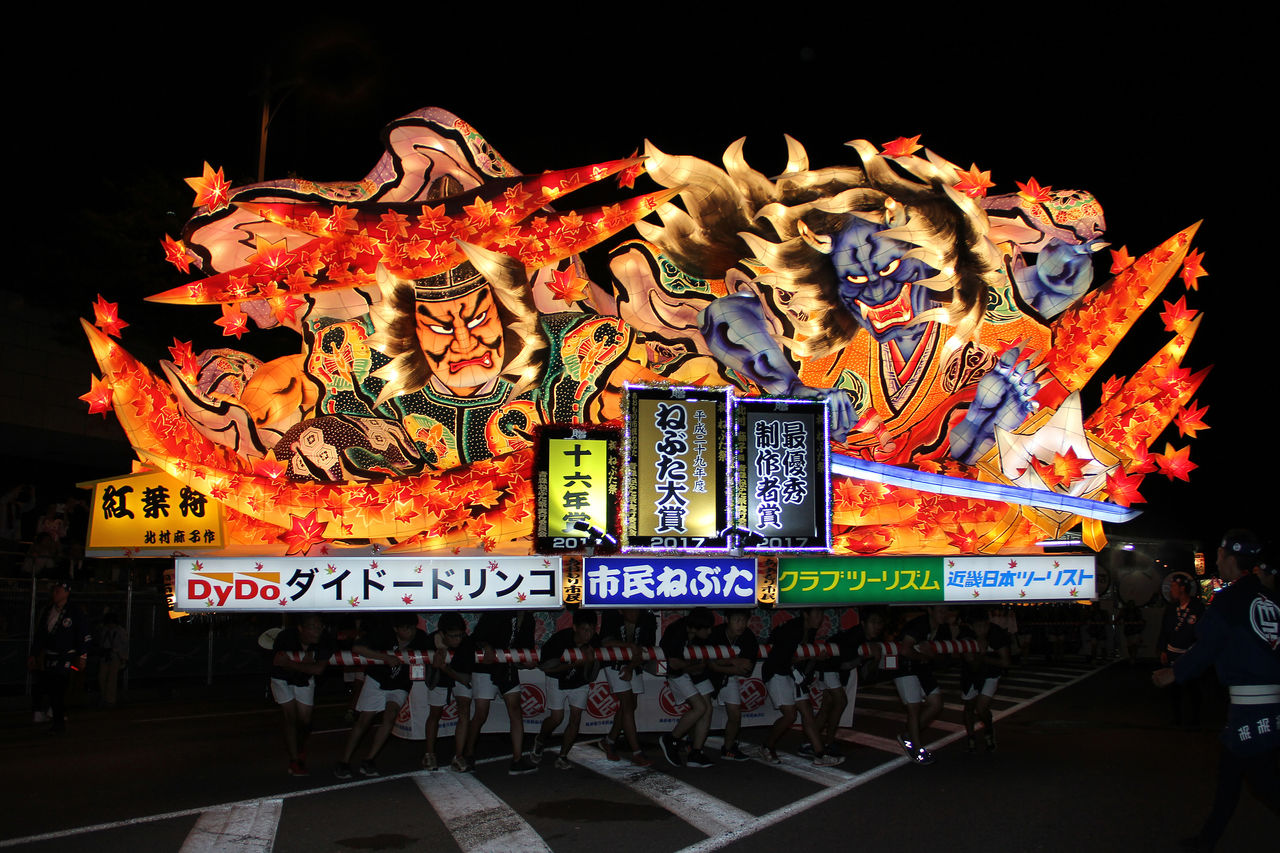 Every year from August 2 to 7, millions of tourists—more than 2.6 million in recent years—flock to the city of Aomori in Aomori Prefecture at the northernmost tip of Japan’s Honshū island to see Japan’s largest summer festival, the Nebuta Matsuri. The origins of the festival are unclear, but it is thought to have ties to the Tanabata star festival, introduced from China in the eighth century. It is also believed to have a connection to neburi nagashi, a variety of traditional practices for “sweeping away sleepiness” that are meant to invigorate hardworking farmers in the hot, sluggish summer months and that are said to have provided the “Nebuta” name of the festival. 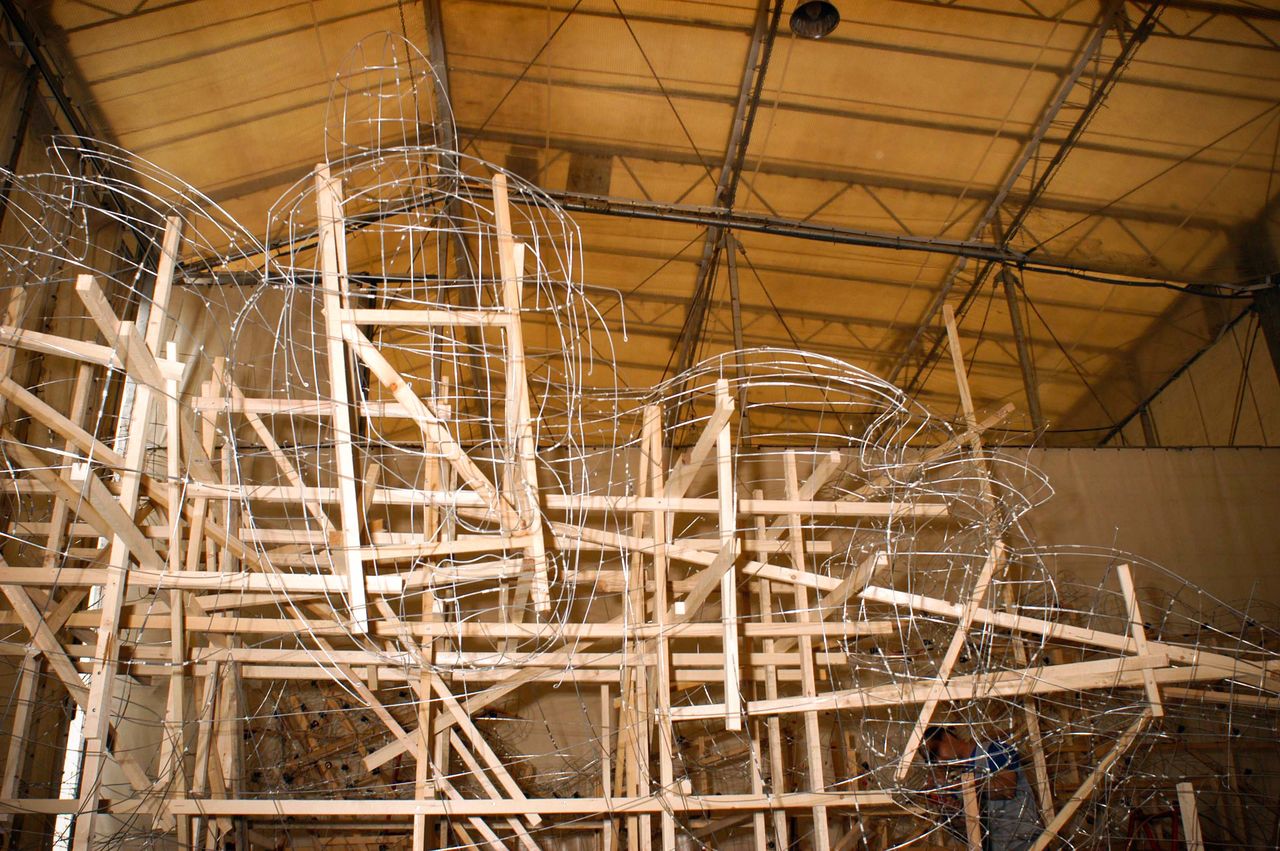 Bamboo and wire framework for a nebuta float. (© Aomori Tourism and Convention Association)

The nebuta floats are large bamboo and wire frames papered and painted to depict various historical and mythological figures. The floats are lit from the inside and paraded down the nighttime streets of Aomori in a procession of magical gigantic lanterns. 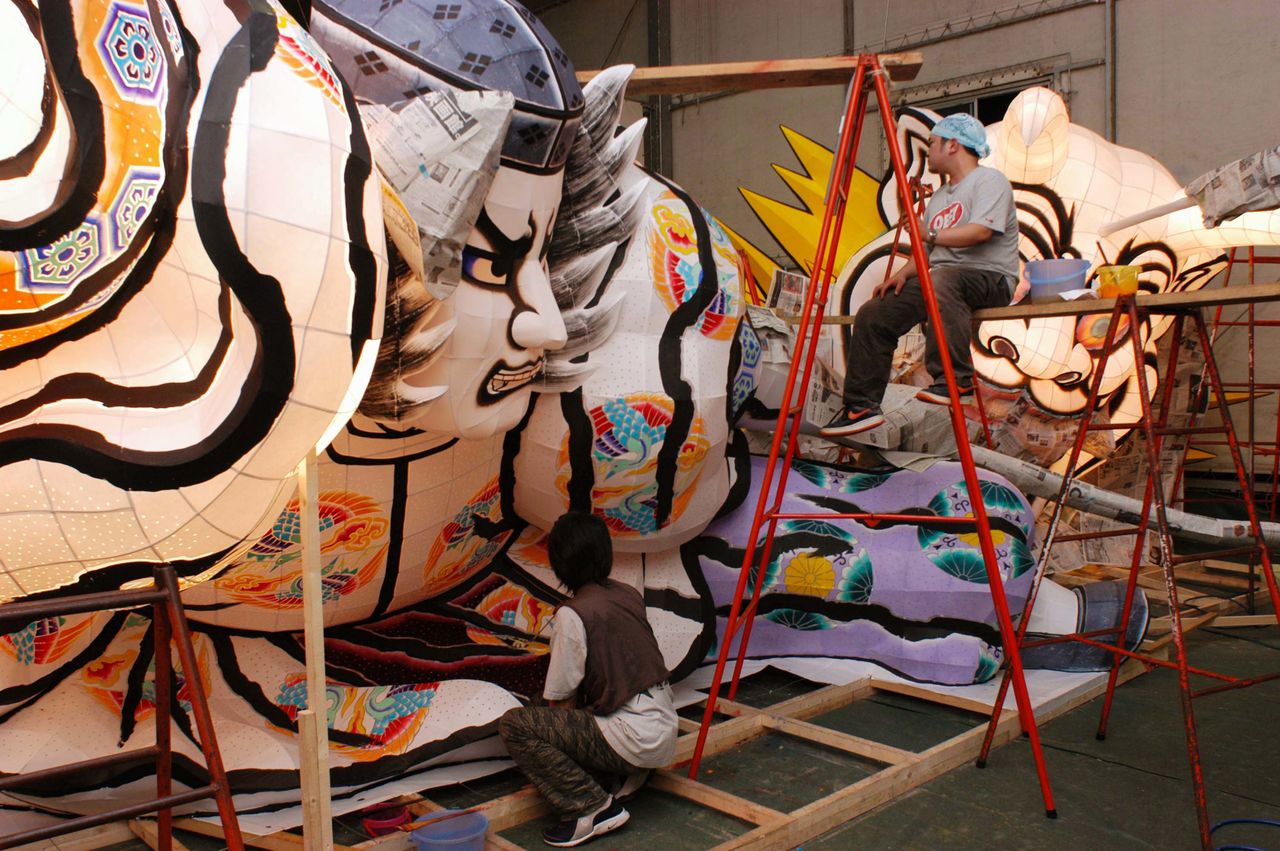 A nebuta-shi paints his float with a rich palette of colors. (© Aomori Tourism and Convention Association)

The larger-than-life nebuta are painted in bright colors to represent Chinese mythological beings, characters from Kabuki plays, and Japanese historical figures. They are the work of nebuta-shi artists who devote themselves for a full year to the painstaking process of deciding the character to be portrayed and then designing, assembling, and painting the float in a painstaking 10-stage process. At their largest, the nebuta can be up to 9 meters wide, 5 meters tall, and 7 meters across.

Visitors Welcome to Join In the Fun 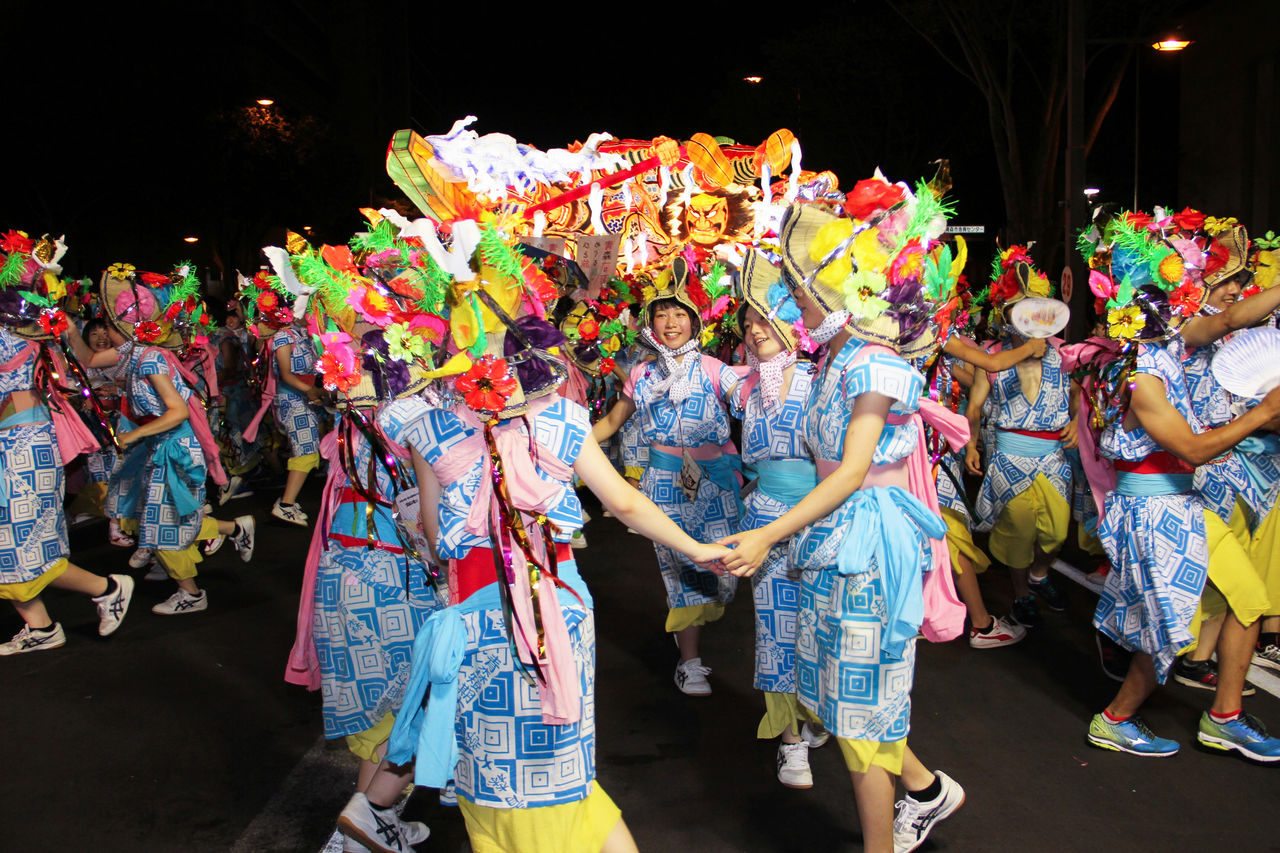 Haneto dancers leap to shouts of “Rasse ra!” to set the tempo of the parade. (© Aomori Tourism and Convention Association)

The chants of “Rasse ra!” and the jumping contortions of the brightly dressed haneto dancers bring the festival to life. There are anywhere from 500 to 1,000—sometimes as many as 2,000—haneto dancing wildly around each float. The dancers are dressed in yukata and wear hanagasa straw hats decorated with flowers on their heads and straw sandals on their feet. Anyone who wants to participate can rent a haneto outfit and even get help putting it on. The costume gives you license to join in the fun, jumping and dancing to your heart’s content. 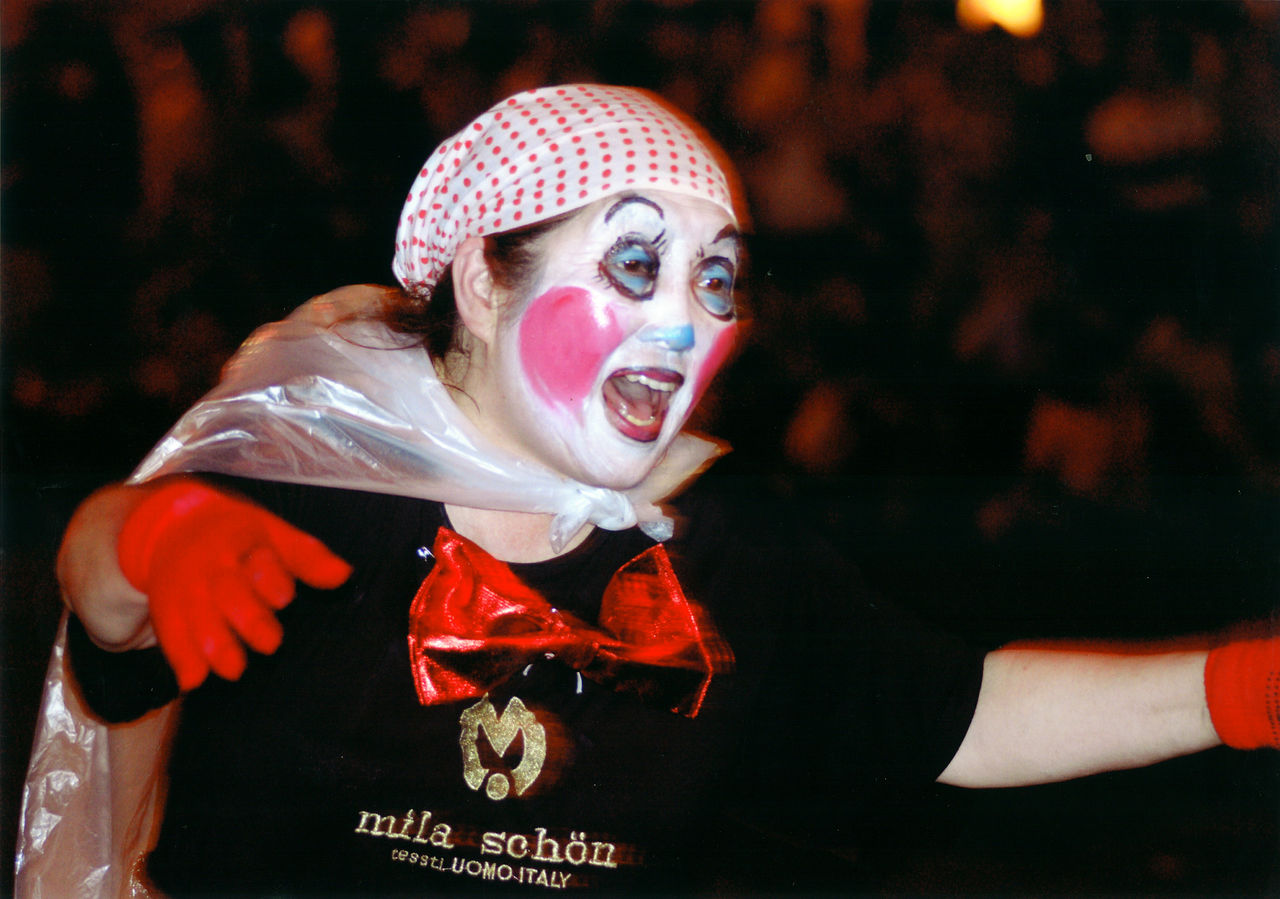 A baketo fool in gaudy make-up adds to the rambunctious atmosphere. (© Aomori Tourism and Convention Association) 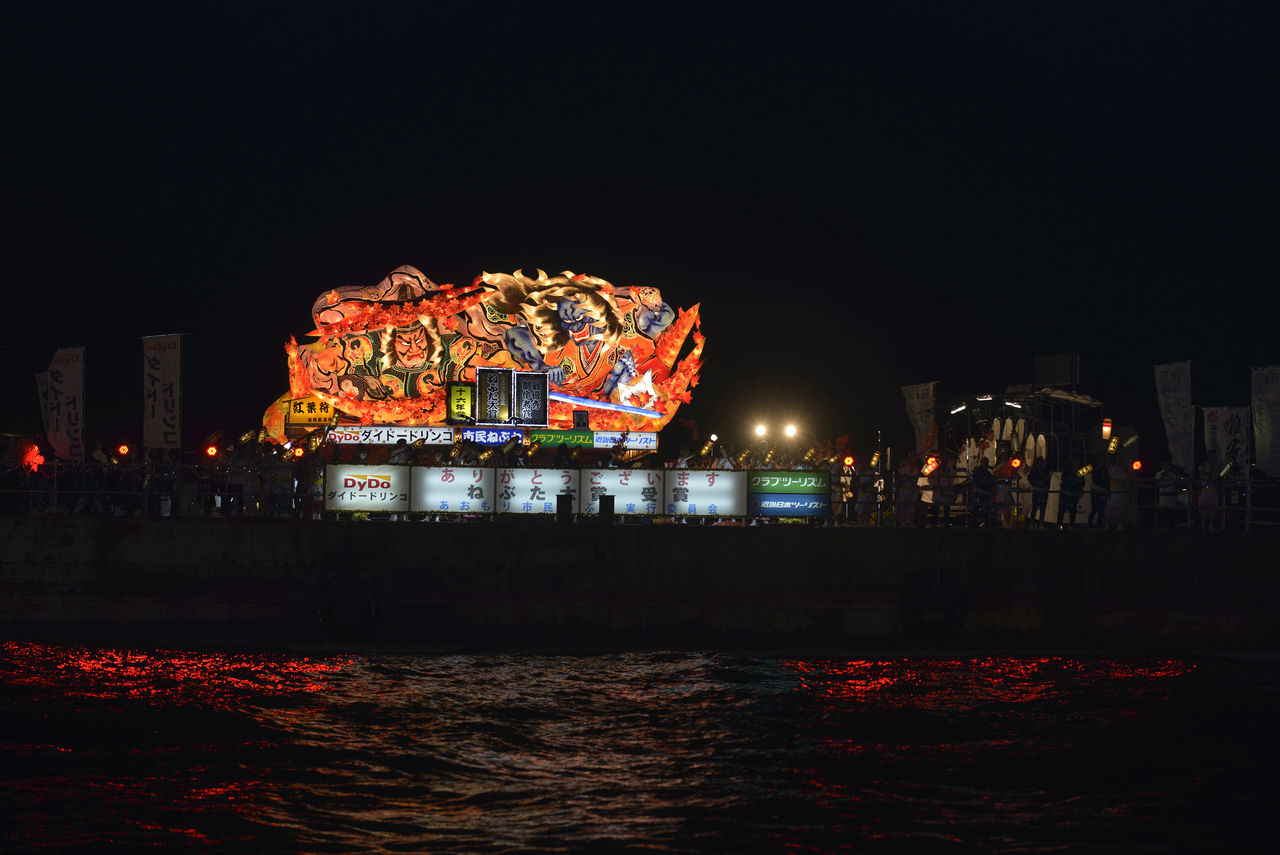 In the grand finale, the top-ranking floats are loaded onto boats for a waterborne parade in the bay. (© Aomori Tourism and Convention Association)

You are sure to be thrilled by the huge lantern floats of heroic figures as they glide by in the dark accompanied by upbeat hayashi music and jumping haneto dancers. The nebuta parade winds its way through the city of Aomori every night from August 2 to 6. On the last day, August 7, the parade is held in the afternoon and at night spectators are treated to the sight of specially selected lantern floats carried on boats around Mutsu Bay, accompanied by a grand display of fireworks. 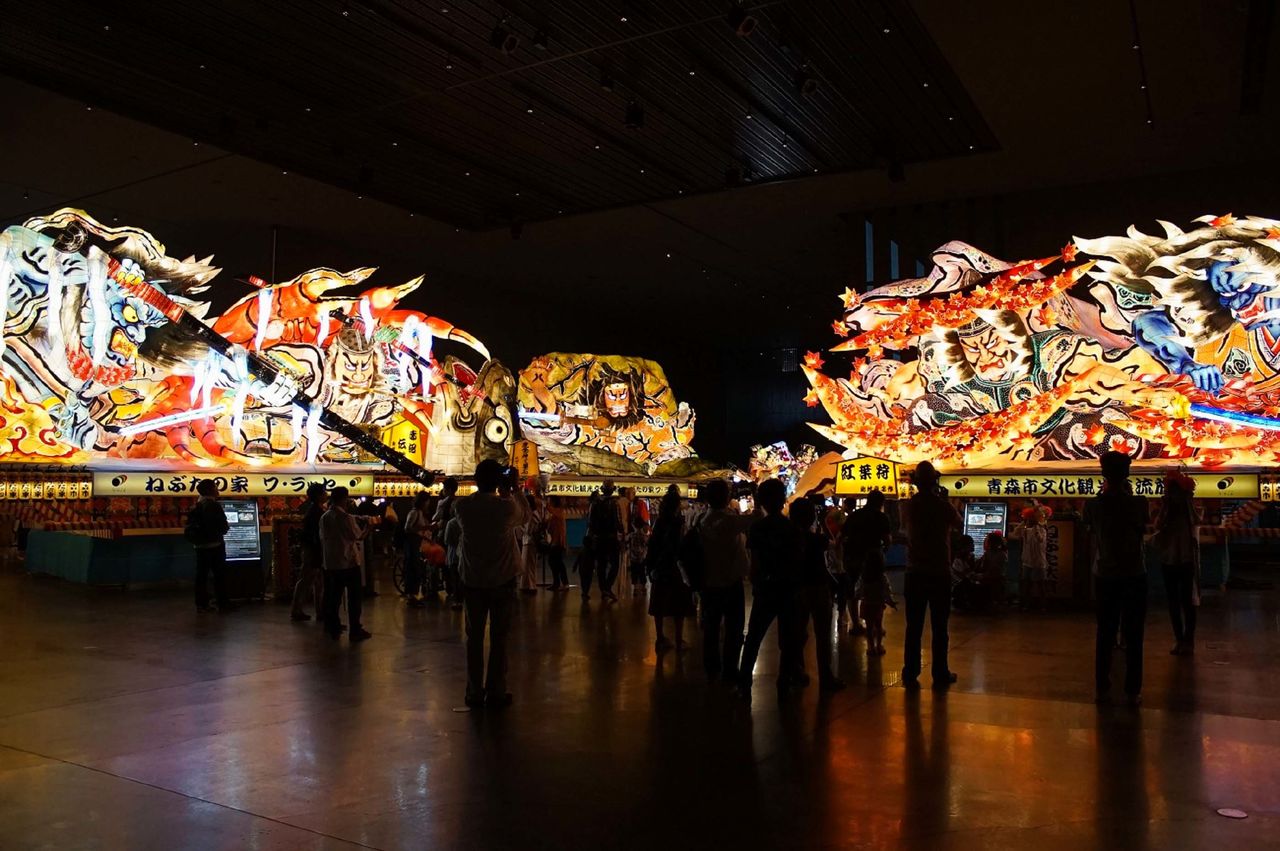 View the dynamic floats year-round at this nearby museum. (© Wa Rasse Nebuta Museum)

The Wa Rasse Nebuta Museum offers a year-round glimpse of the famous festival. The main hall houses several of the grand nebuta floats actually used in the festival. There is also an exhibition area introducing the history of the festival and a gift shop selling Aomori handcrafts and nebuta souvenirs. The museum lobby offers a sweeping view of the harbor and the sea beyond.

(Originally written in Japanese. Banner photo: A powerful nebuta figure with a fierce gaze. Reporting and text by Shoepress. Photographs © the Aomori Tourism and Convention Association, except where otherwise noted.)