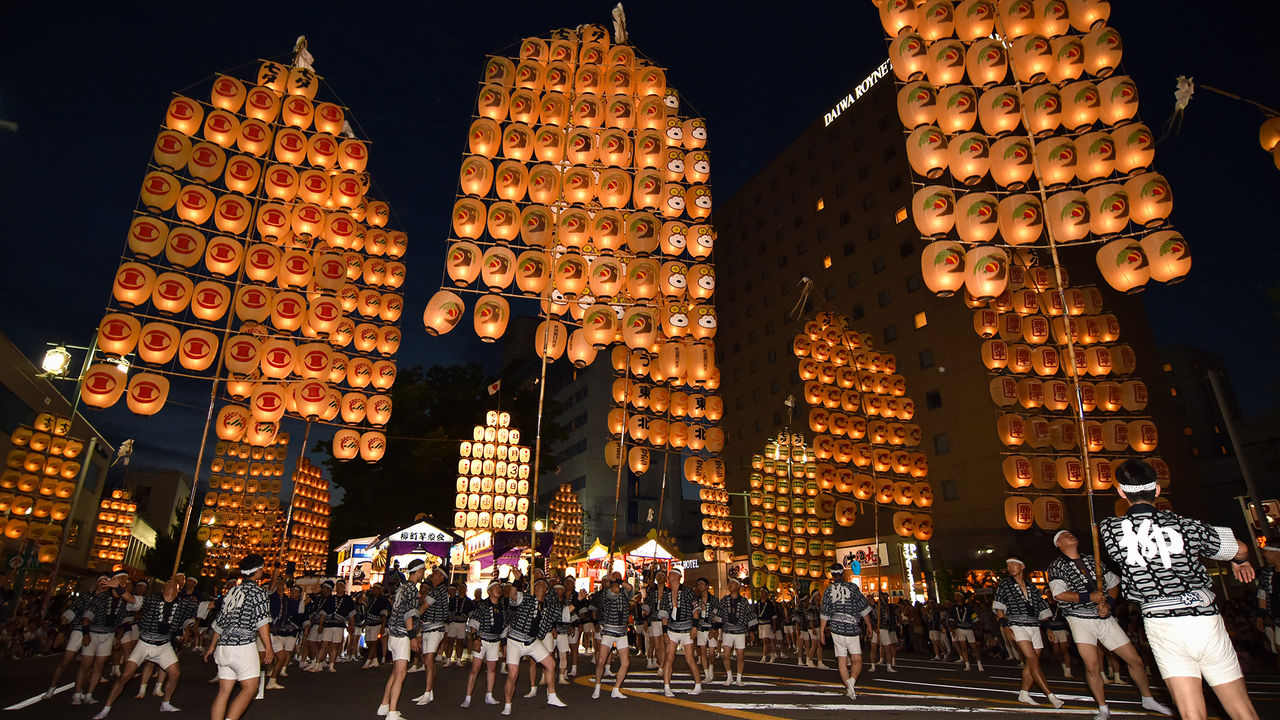 Travel Culture May 27, 2018
The Akita Kantō Matsuri features a procession of hundreds kantō bamboo poles, some more than 12 meters tall, laden with racks of brightly lit lanterns that are skillfully balanced by their carriers on their hands, foreheads, shoulders, hips, and backs. The balancing act and the thousands of lanterns in the night sky make this one of the northern Tōhoku region’s most photogenic festivals.

Held in the center of the city of Akita every year from August 3 to 6, the Akita Kantō Matsuri is considered to be one of the four major festivals of the Tōhoku region in northern Japan. The festival traces its origins to neburi nagashi, a range of practices that came about in the middle of the eighteenth century as a means to to “sweep away sleepiness,” giving farmers the energy needed to get through the muggy heat of summer. It is not known when, exactly, the festival came to incorporate the kantō bamboo poles with their racks of paper lanterns.

The Akita Kantō Matsuri is designated as an Important Intangible Folk Cultural Property. The brightly lit lanterns, golden against the night sky, are said to represent heavy-laden ears of rice, and the event is considered primarily to be a festival to pray for a bountiful harvest. 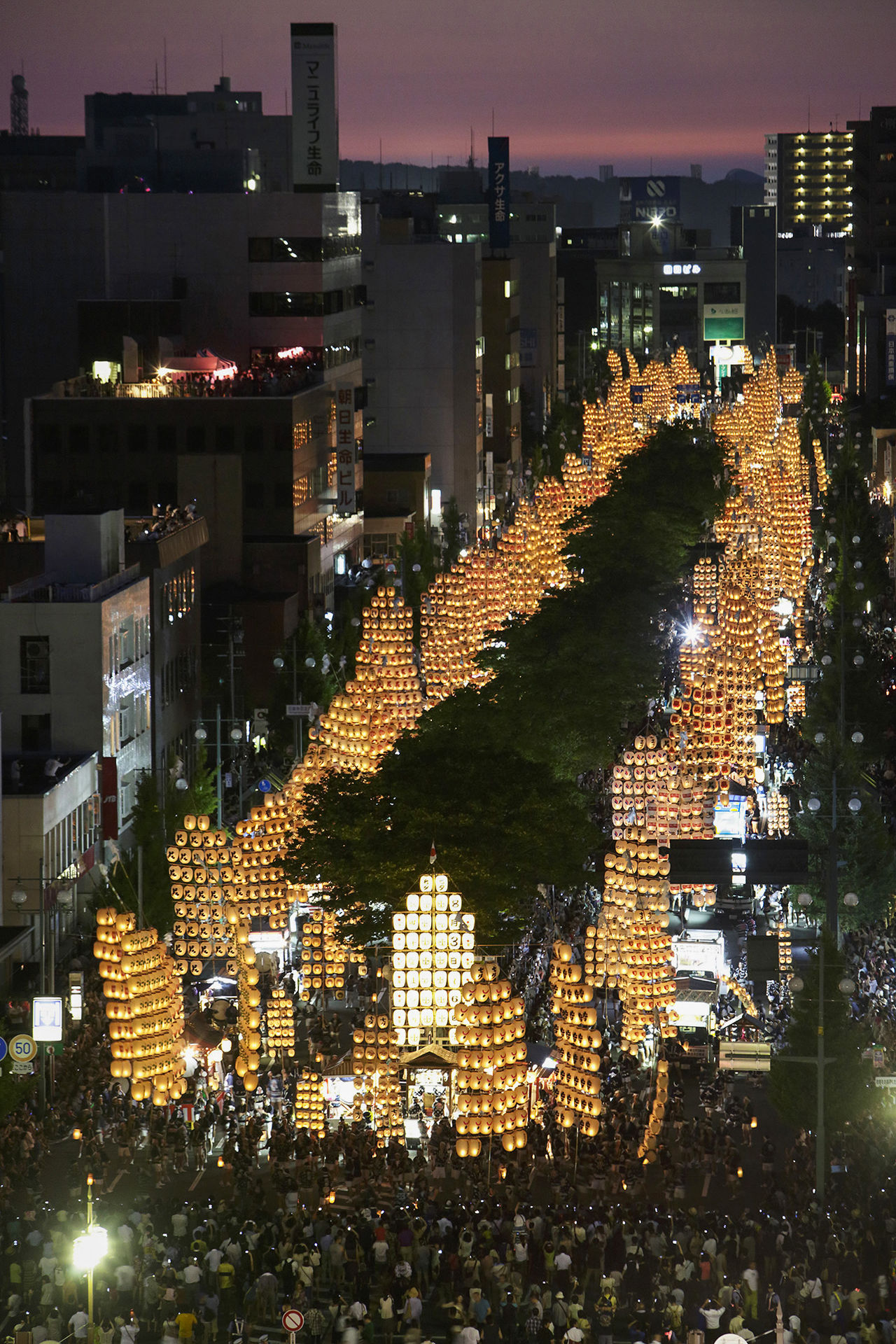 The kantō bamboo poles come in four sizes, ranging from the smallest, a 5-meter pole carrying 24 lanterns, to the largest, a 12-meter giant that weighs as much as 50 kilograms and bears a rack of 46 lanterns. The lanterns are handmade and bear the seal of their bearer’s home district, as well as such felicitous symbols as artistic renditions of Chinese characters and seagoing vessels.

The festival highlight is at night, when all 280 of the brightly lit kantō are paraded along the city’s main avenue. At dramatic moments, all of the kantō are thrust high into the air by their carriers, called sashite, causing the golden lanterns to sway. The parade is accompanied by the lively hayashi music of drum and flute punctuated by shouts of encouragement. 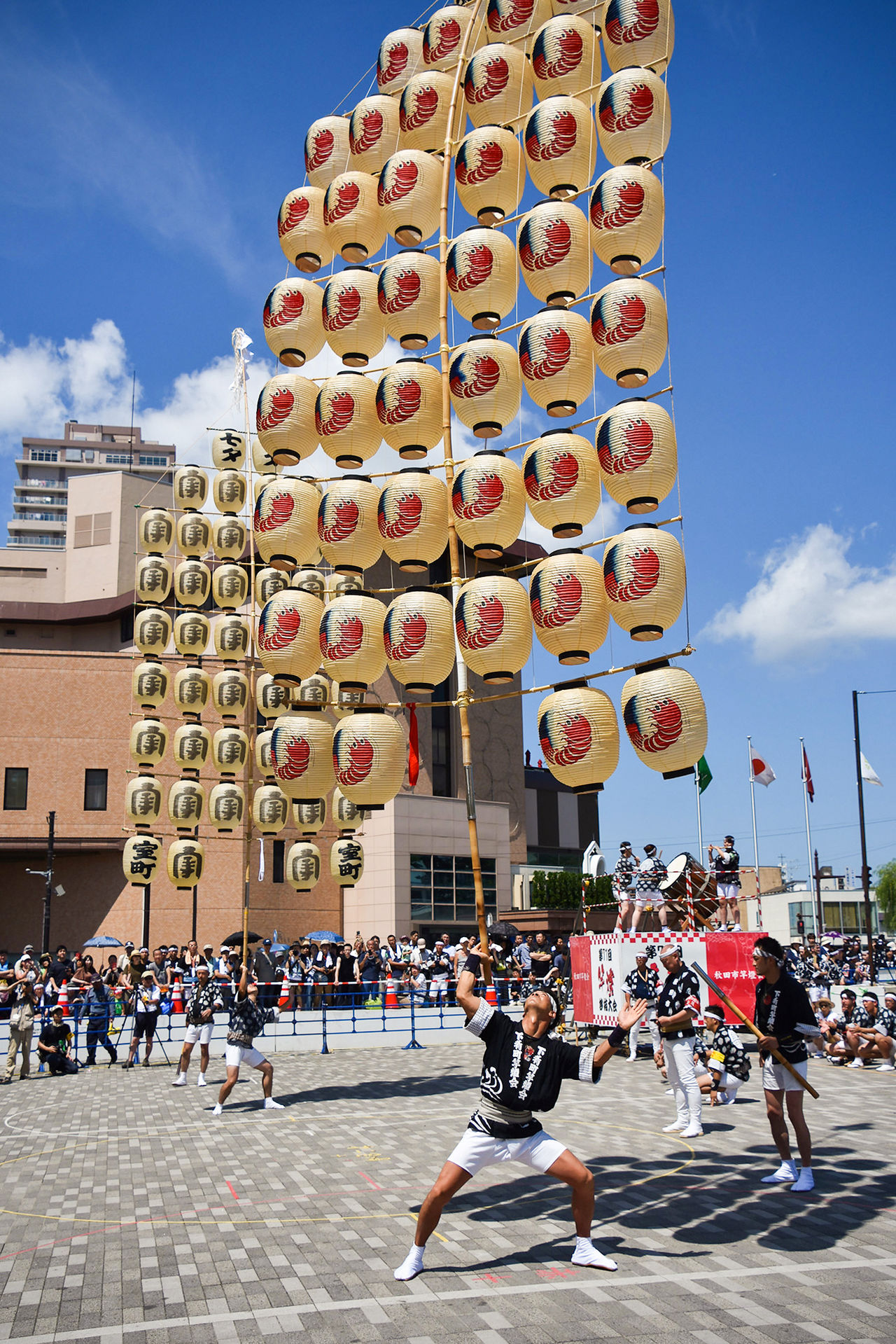 Just as mesmerizing as the kantō with their golden lanterns are the skillful maneuvers of the sashite carriers as they balance the heavy poles on their hands, foreheads, shoulders, and hips. Vibrant hayashi music and calls of “Dokkoi-shō, dokkoi-shō!” enhance the excitement of their performances, which take place during the day before the fantastic night parade. 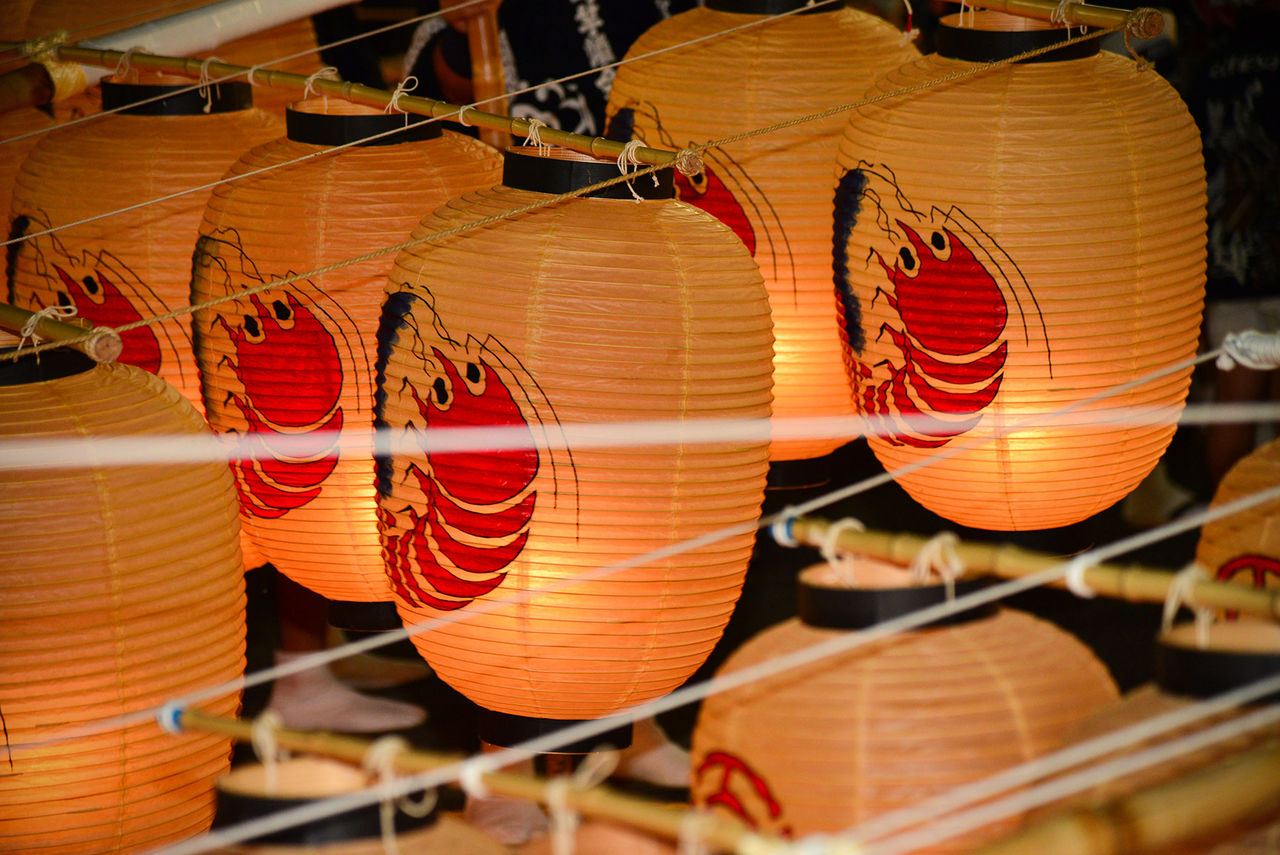 The Akita Kantō Matsuri mesmerizes spectators with its 10,000 lanterns held high in the night sky, skillfully balanced by their sashite carriers. At the end of each day’s events on August 3–6, open sessions are held in which spectators can take photos with the performers and try to balance the heavy poles themselves. Come and experience for yourself a thrilling 270-year tradition. 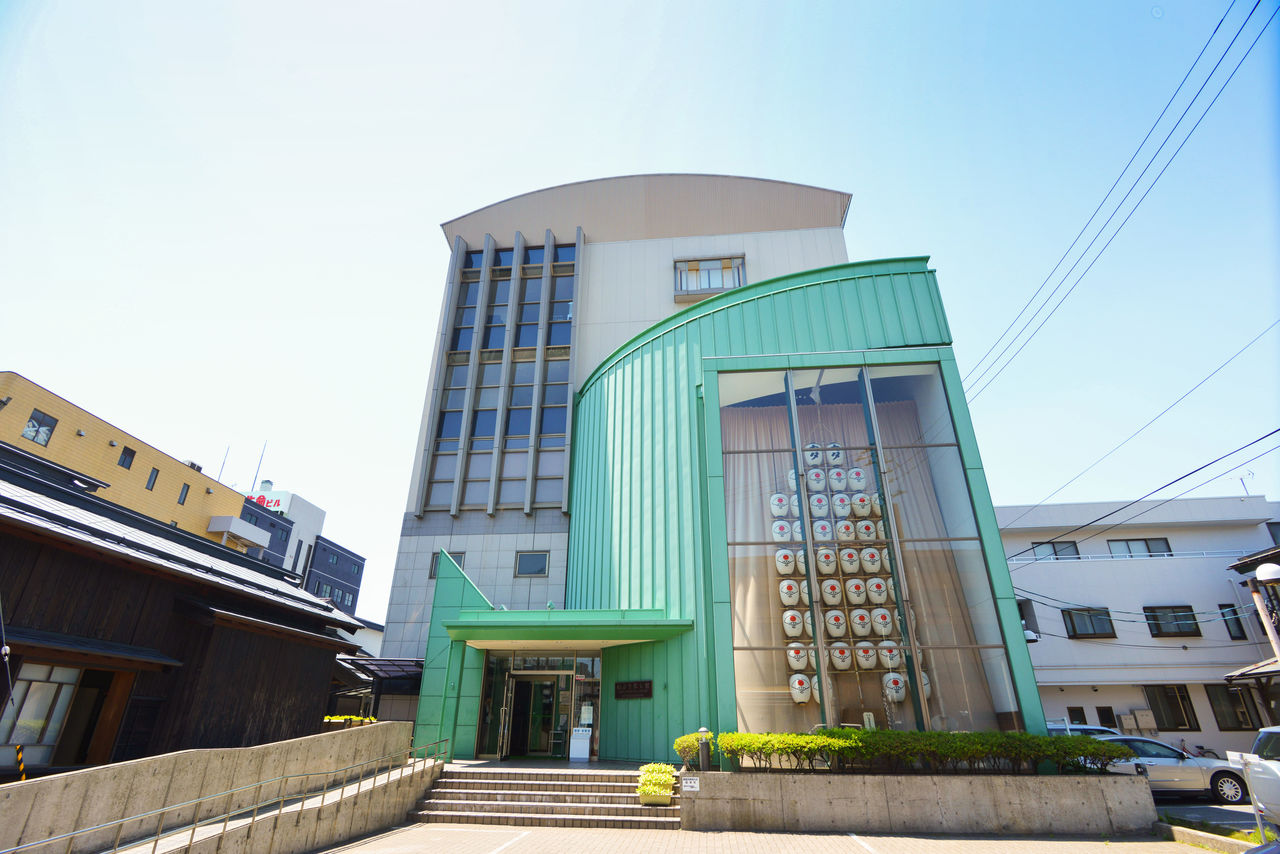 The Neburi-nagashi Hall has a permanent exhibit on the Akita Kantō Festival. (© Shoepress)

The Akita Folk Traditions Hall, also known as the Neburi-nagashi Hall, has a permanent exhibit on the Akita Kantō Festival and on other traditional events and festivals of Akita that are registered with UNESCO as having Intangible Cultural Heritage elements, such as Akita City’s Tsuchizaki Shinmei Shrine Festival. On the first floor of the hall is an area where visitors can try balancing smaller versions of the kantō poles. From April through October, professional kantō balancing performances are held from 1:30 to 2:10 every Saturday, Sunday, and holiday afternoon.