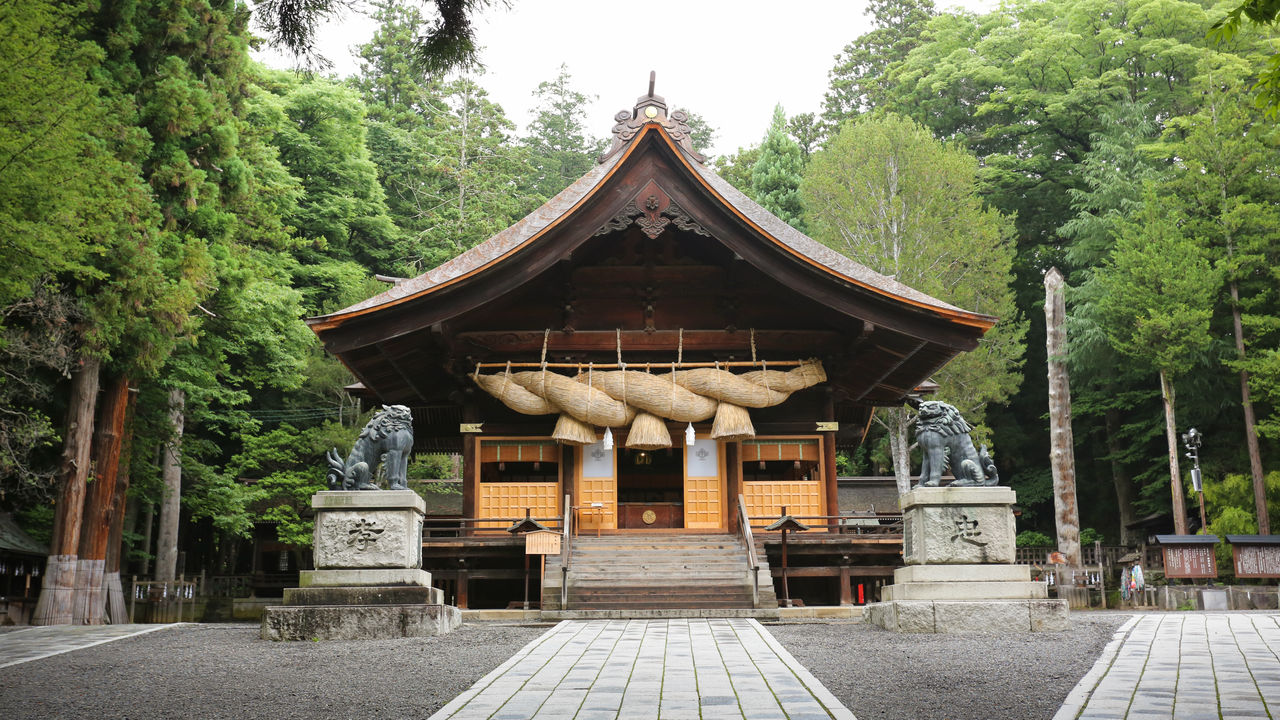 An Ancient Shrine Evokes the Origins of Japanese Religion

Suwa Taisha is an ancient Shintō complex stretching along the shoreline of beautiful Lake Suwa in Japan’s mountainous Nagano Prefecture. This set of shrines rivals Japan’s better-known religious centers, like the world-famous Ise Shrine, as one of the oldest Shintō religious complexes in the country. Suwa Taisha is even cited directly in the pages of the eighth century Kojiki (Record of Ancient Matters), Japan’s oldest surviving historical chronicle. The Kojiki records that the shrine was founded to venerate the deity Takeminakata-no-kami, who is said to have fled to then remote Suwa after being defeated in a succession struggle to lead the land of Izumo, home today to Japan’s more famous Izumo Shrine.

The kami divine spirits venerated at Suwa Taisha are Takeminakata and his consort, Yasakatome-no-kami. There are more than 10,000 Suwa shrines affiliated with Suwa Taisha across Japan, and the sect still has many devout followers. 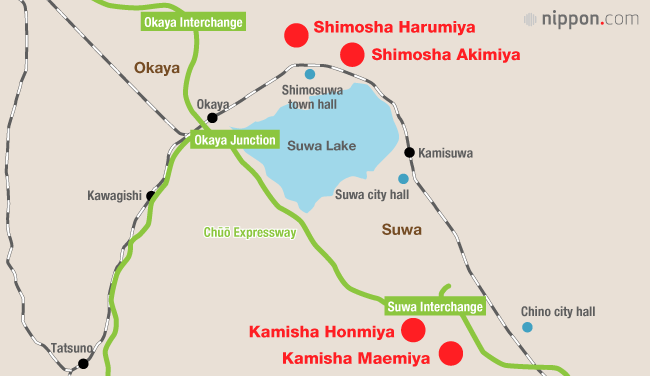 Suwa Taisha’s most distinguishing aspect is its unusual layout, with four related shrines separated by the waters of Lake Suwa. On the southern shore of the lake are Maemiya in Chino and Honmiya in Suwa making up the kamisha (upper shrines), while on the north shore are found Harumiya and Akimiya (both in Shimosuwa) of the shimosha (lower shrines). While Maemiya possesses a honden main sanctuary to house its shintai, or “divine body,” a sacred object believed to house the spirit of a shrine’s kami god, the other three shrines in this far-flung complex possess only haiden worship halls, called heihaiden here.

What then, is the supplicant visiting these other shrines supposed to pray to? At Honmiya, the shintai the supplicants worship is Moriyasan, a mountain to be found southwest from the shrine. At Akimiya, the shintai is the shrine’s magnificent ichi Japanese yew tree, while not to be outdone, Harumiya offers worshippers a mighty Japanese cedar as its shintai. Here at Suwa Taisha, we find ancient forms of nature worship dating back hundreds, perhaps even thousands, of years to before the very the founding of Shintō itself, still alive and vibrant and being practiced to this day. 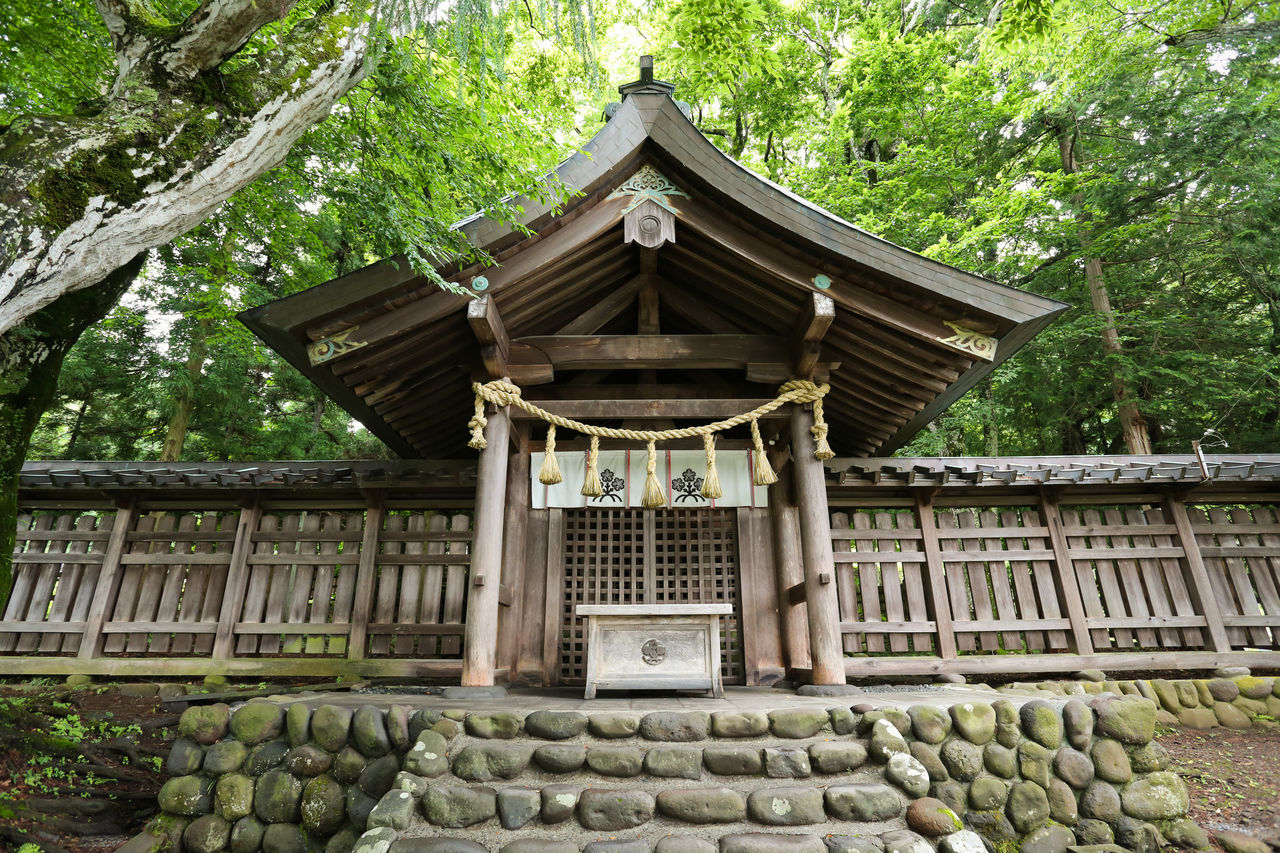 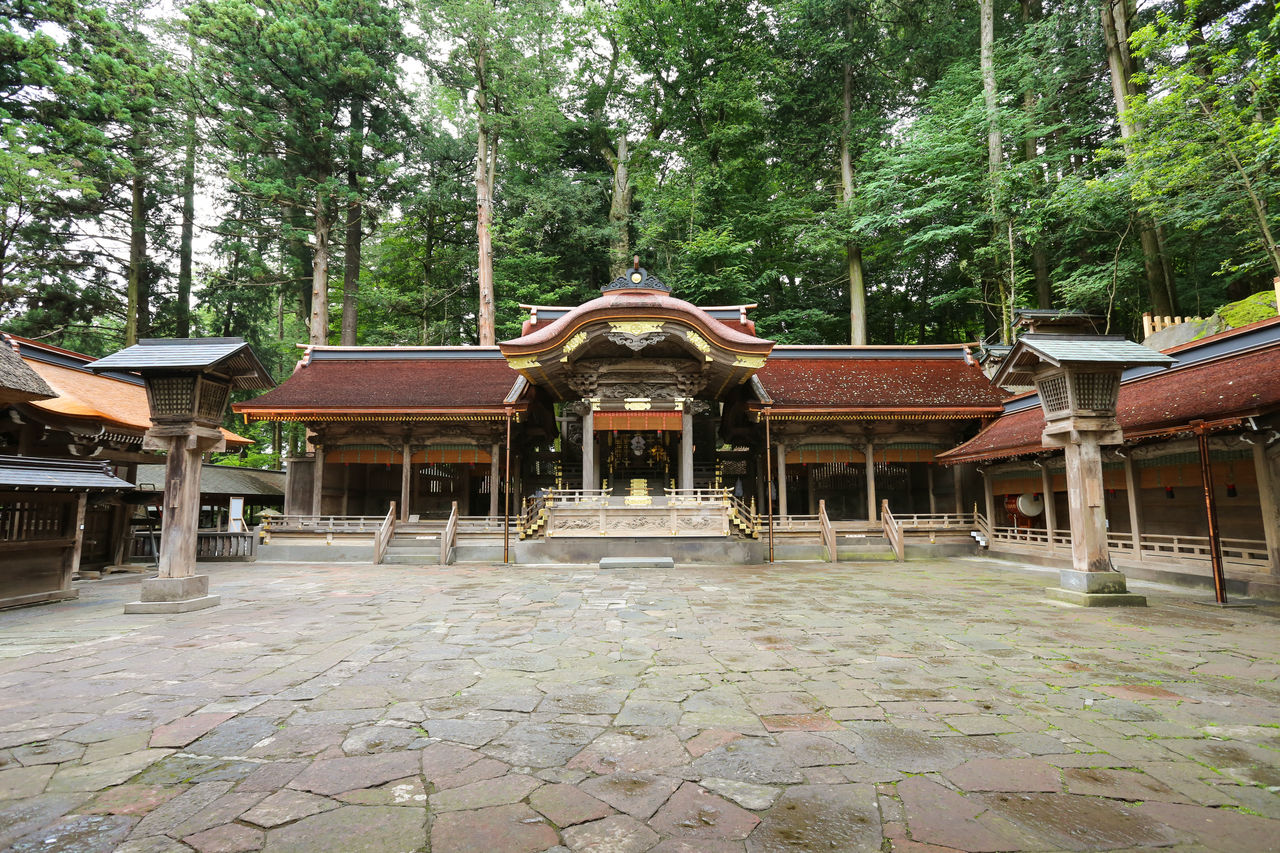 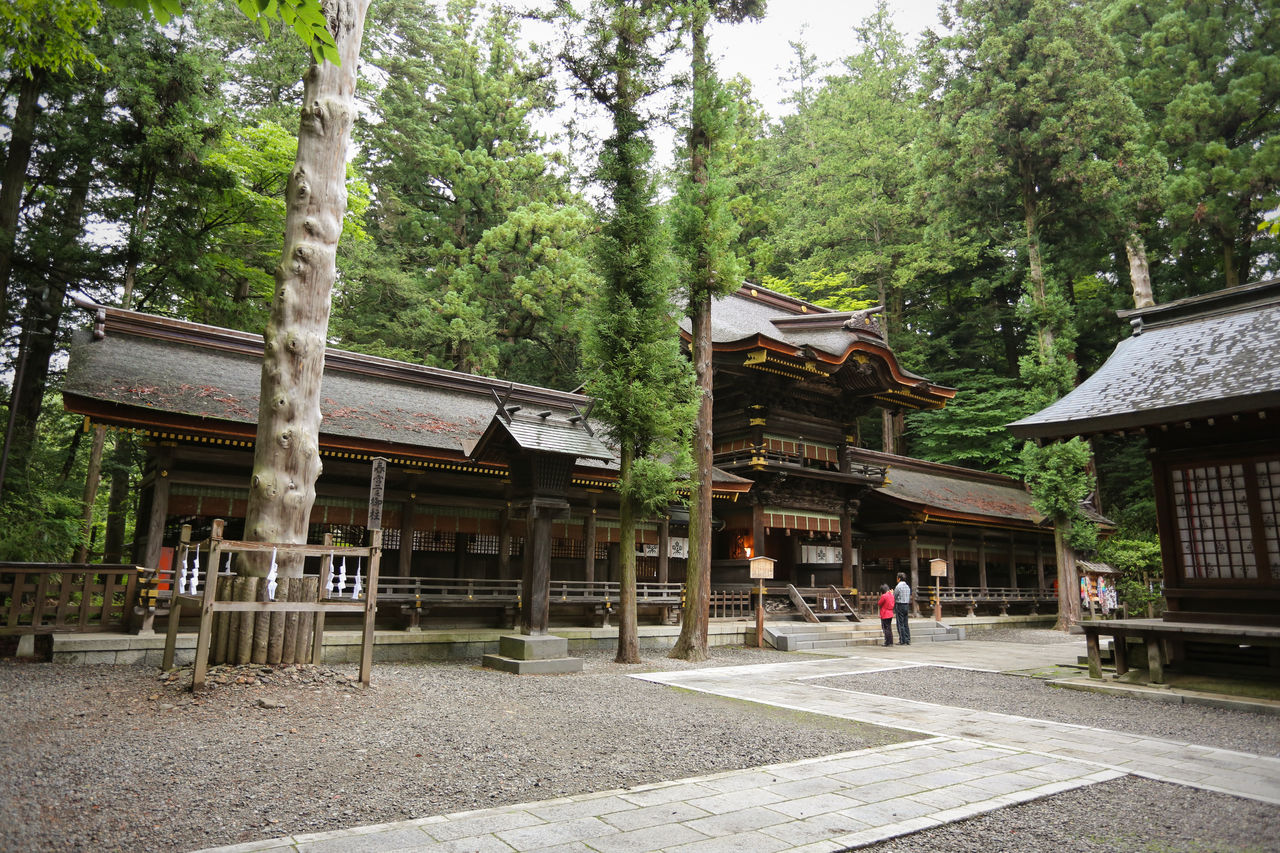 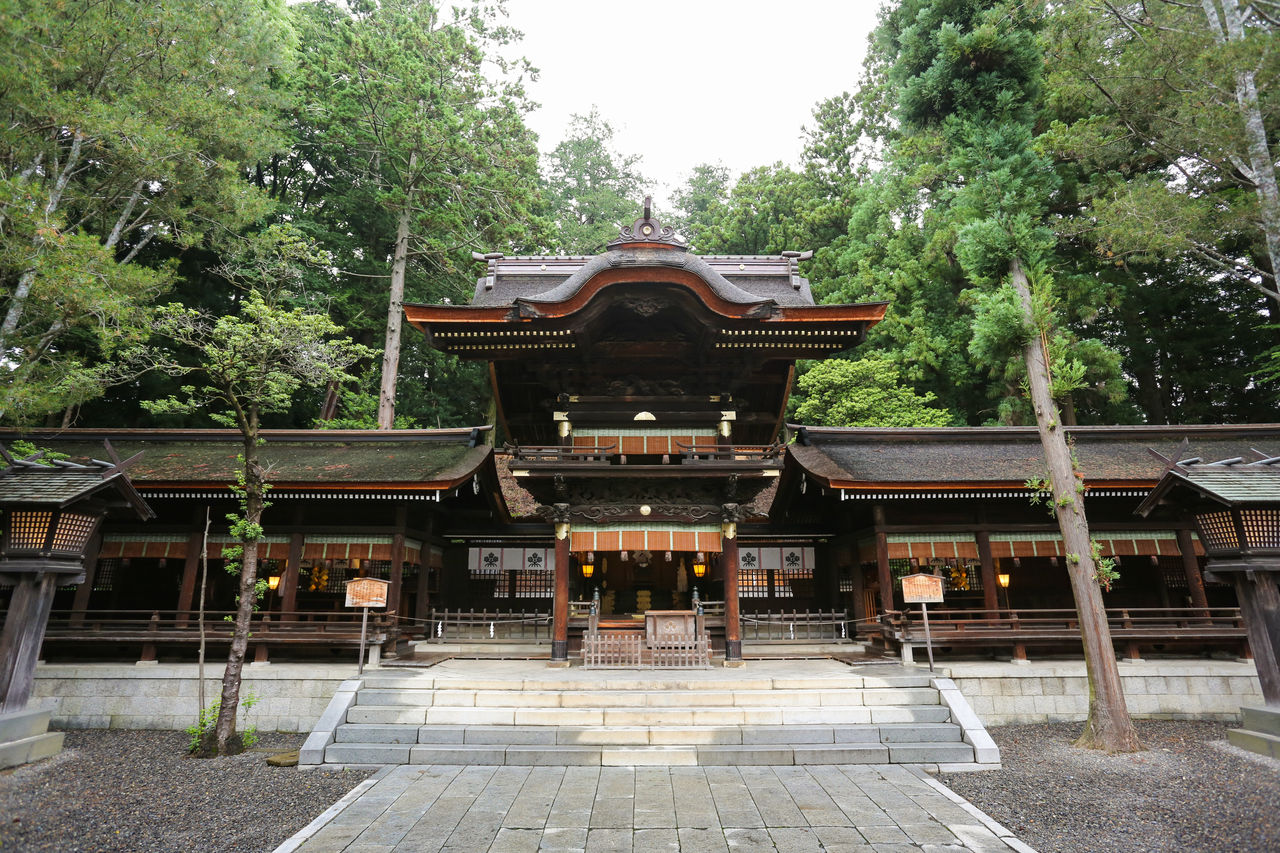 A Festival Worth the Wait

Japan’s prehistoric Jōmon culture (ca. 10,000–300 BCE) was particularly vibrant some 5,000 years ago in the foothills of the Yatsugatake mountain range overlooking Lake Suwa, and numerous Jōmon archeological sites have been discovered in the region. In Suwa Shinkō, a local form of faith, Shintō as we know it today coexists with folk beliefs dating back to long before the establishment of the religion itself. The Togariishi Museum of Jōmon Archaeology in Chino displays a treasure trove of archaeological materials uncovered at Jōmon period sites along the Yatsugatake foothills. Two of these ancient artifacts, the exquisite clay figurines known popularly as the “The Venus of Jōmon” and “The Masked Goddess,” have been designated National Treasures. Here it is possible to glimpse a spiritual culture of immense antiquity, making it well worth your time to add a museum visit to any Suwa Taisha pilgrimage.

Another distinction that has made Suwa Taisha famous across Japan is the shrine complex’s thrilling Onbashira-matsuri. This festival is held every Year of the Tiger and Year of the Monkey, or once every six years—most recently in 2016. Officially known as the Shikinen Zōei Mihashira Taisai, the festival is a religious event in which the trunks of 16 mammoth, 200-year-old momi Japanese fir trees a meter in diameter and weighing as much as 10 tons each are felled in the nearby mountains and then literally manhandled by workmen and supplicants down precipitous slopes and across creeks and rivers, ultimately being transported some 20 kilometers to the kamisha shrines and 12 kilometers to the shimosha shrines, all to a rousing kiyari workmen’s chant. The trunks are finally erected as pillars—the hashira that form part of the festival’s name—in the four corners of each of the shrine grounds.

These mammoth tree trunks are like immense spikes pounded into the earth itself. Yet astonishing as this ancient ceremony is to witness, there is still no definitive explanation as to how, when, and why these onbashira tree trunks came to be harvested and erected in this remarkable fashion in the first place. 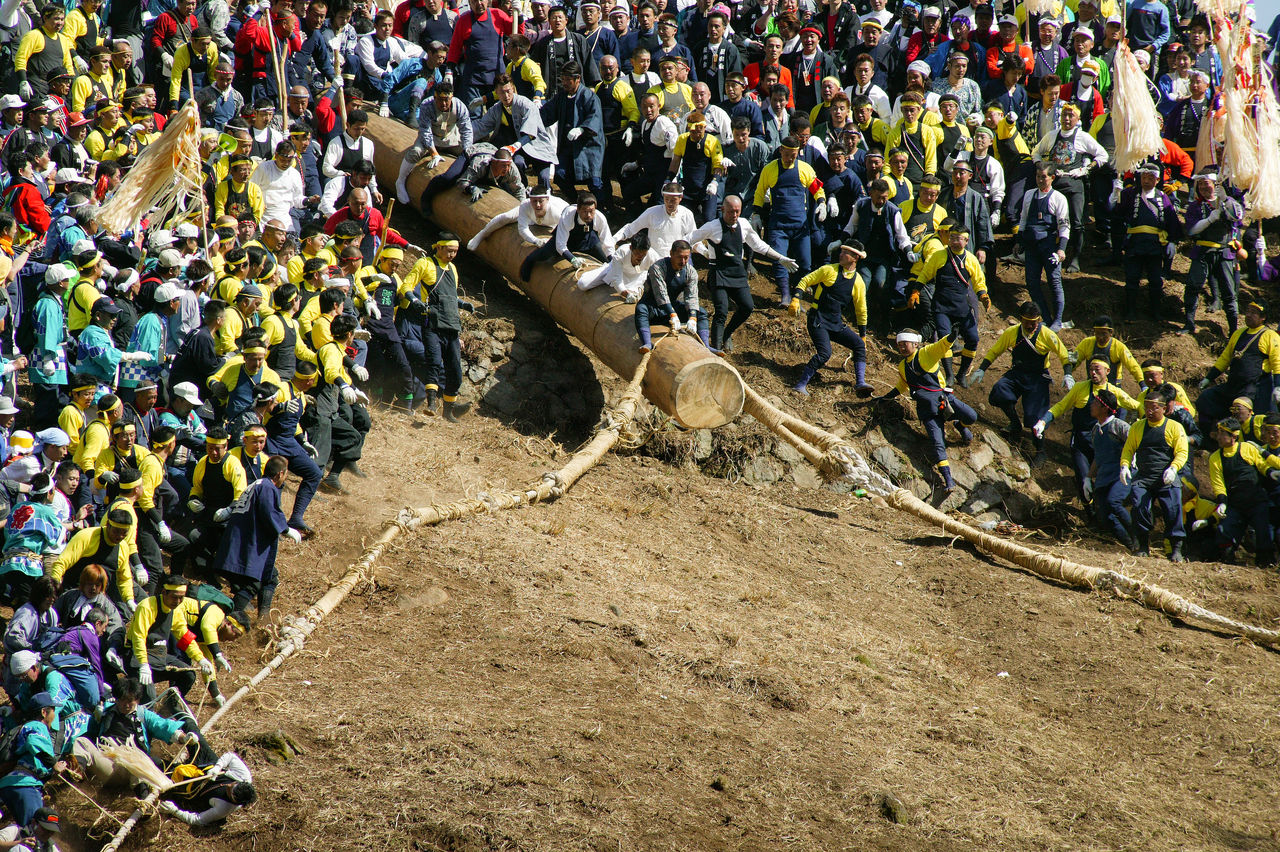 The kiotoshi, “sending down the trees,” part of the Onbashira festival sees daring men ride the massive logs down the mountain slopes.

Although four tree trunks are erected at each of the four shrines at the Suwa Taisha complex, the only place where you can see all four close up is at Maemiya in the kamisha group. At the other three shrines, only one or two the two of the pillars are visible at a time from the areas open to visitors. To actually witness them being brought down from the mountains and put in place, you might have to wait a little longer. The next Onbashira festival will not be held until 2022, the Year of the Tiger.