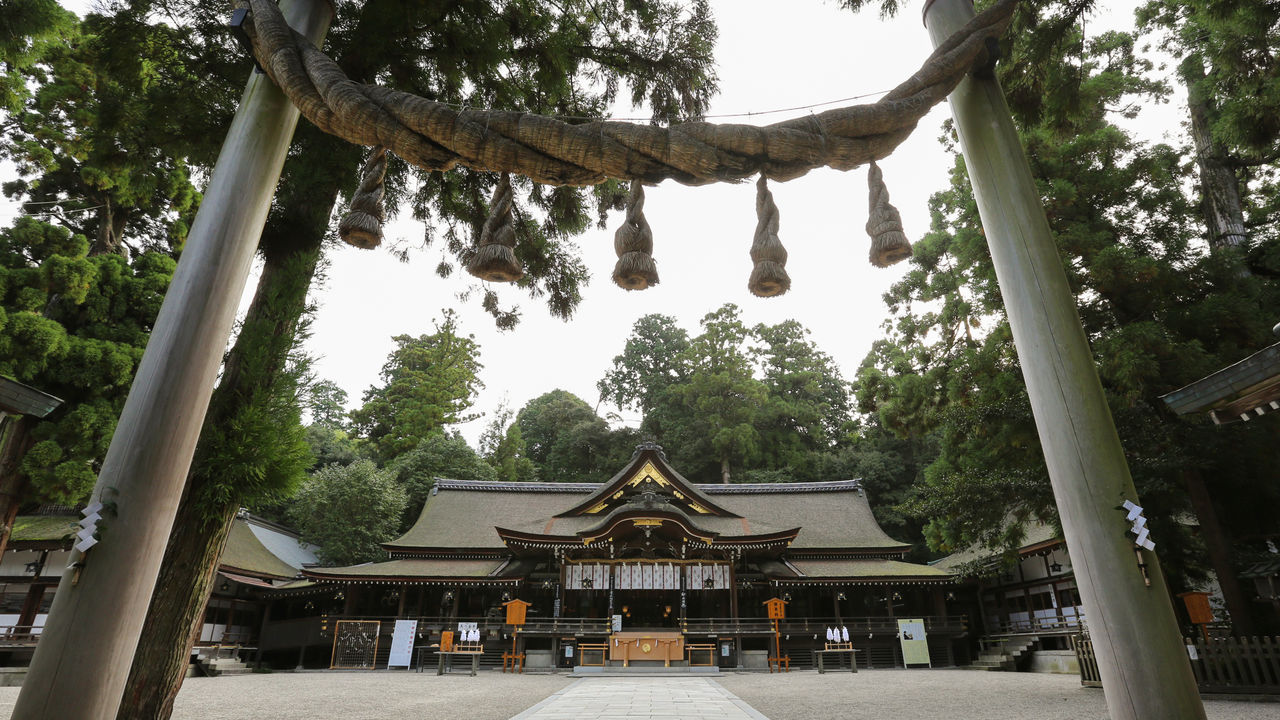 Jul 22, 2018
Two posts linked by a sacred shimenawa rope mark the entrance to Ōmiwa Shrine, one of Japan’s earliest Shintō shrines and an ancient place of worship dedicated to Nara Prefecture’s Mount Miwa.

A Shrine for a Mountain

Mount Miwa, a gentle summit 467 meters high in the southeast corner of the Nara basin, is the tutelary deity of Ōmiwa Shrine in Sakurai, Nara Prefecture. Ōmiwa Shrine is one of the oldest Shinto shrines in Japan—its establishment is recorded in the ancient eighth-century chronicles, the Kojiki (Records of Ancient Matters) and the Nihon Shoki (Chronicles of Japan). Because it is dedicated to a whole mountain, the shrine lacks the usual honden, the main sanctuary housing the shrine deity. Instead, rites are carried out in the haiden, the hall of worship. The torii gateway to the shrine, a simple structure of two poles without the connecting horizontal lintel or tie-beam seen on most torii, is another feature marking the Ōmiwa Shrine as a repository of some of Japan’s most ancient rites of nature worship. 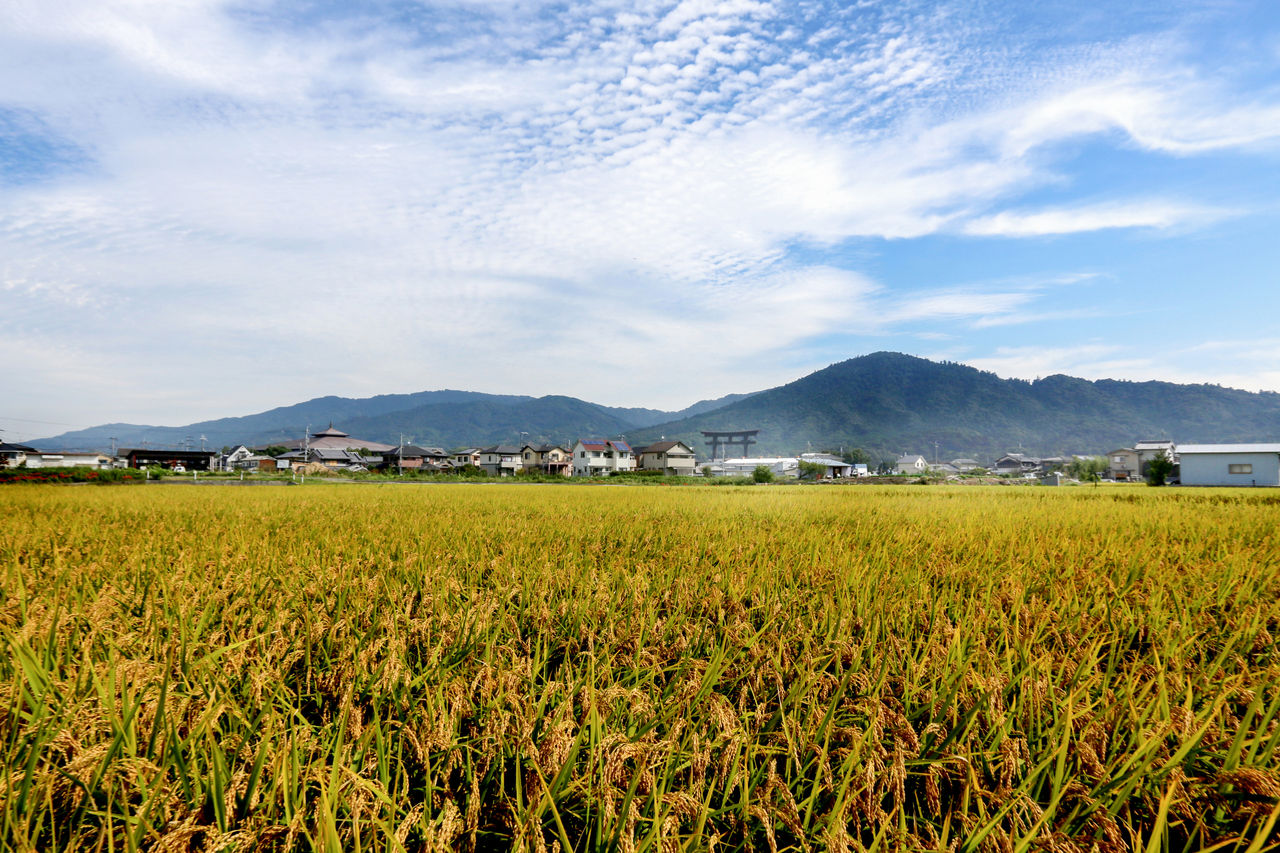 In the early Kofun Period of the third century, the Yamato dynasty held sway over the Kinki region, where Nara Prefecture is located. The priests of the Miwa clan who were responsible for the sacred rites of the Ōmiwa Shrine were conferred with the title of kimi to indicate their patronage by the Yamato rulers. This significantly elevated their status and by extension that of Mount Miwa, their tutelary spirit, which was for a long time considered the most sacred of all mountains in the Yamato domain.

For centuries no one was allowed to climb Mount Miwa, and not a twig nor leaf were allowed to be touched, with the result that today the sacred summit is covered by towering pine, cedar, and cypress giants. Only since the Meiji period (1868–1912) has permission been given to climb the mountain in pilgrimage. The devout must petition for the privilege and are required to wear white sashes around their necks and carry gohei staffs decorated with plaited paper streamers to purify themselves and mark their sacred purpose. Eating, drinking, smoking, and taking photos while on the mountain are strictly prohibited. 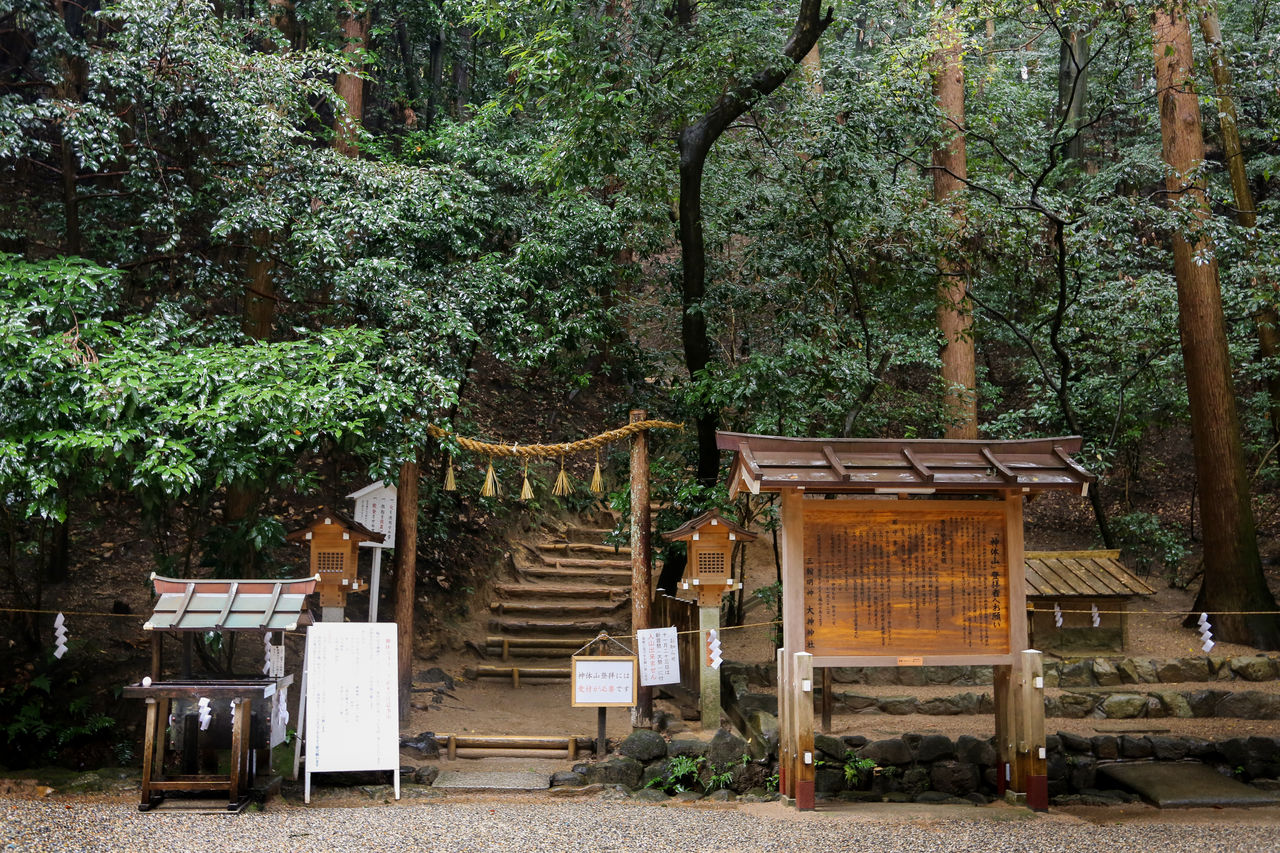 Protective Deities for All Matters of Daily Life

Legend has it that the kami Ōmononushi directed Ōkuninushi, another kami and ruler of the Izumo Province, to worship him on Mount Miwa in the land of Yamato if he wanted to succeed in his nation-building. 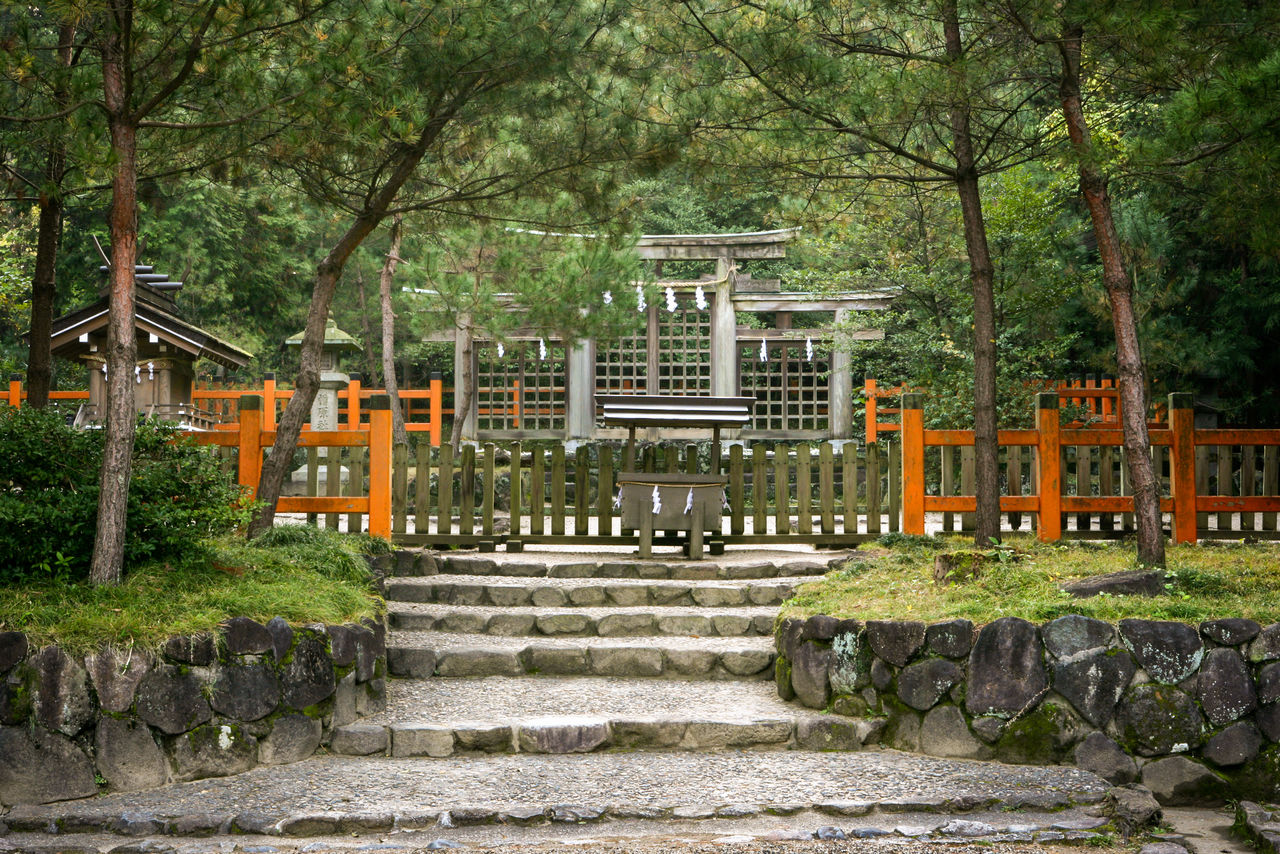 The three torii gates to Hibara Shrine, an auxiliary shrine of Ōmiwa Shrine.

As the patron deity to all things, Ōmononushi is considered a protector from evil and misfortune in all aspects of daily life. He is also known as the patron deity of sake. The sugidama, a ball made of cedar twigs that is hung at the entrance to sake breweries and sake shops to indicate that a new brew is available, is thought to be imbued with the spirit of the sacred cedars of Mount Miwa. Many sake makers acquire their sugidama directly from Ōmiwa Shrine. The shrine also has its own large sugidama, a massive specimen some 1.7 meters in diameter, weighing around 250 kilograms, hanging from the ceiling of the haiden worship hall. The ball is replaced every autumn with a fresh, green one. 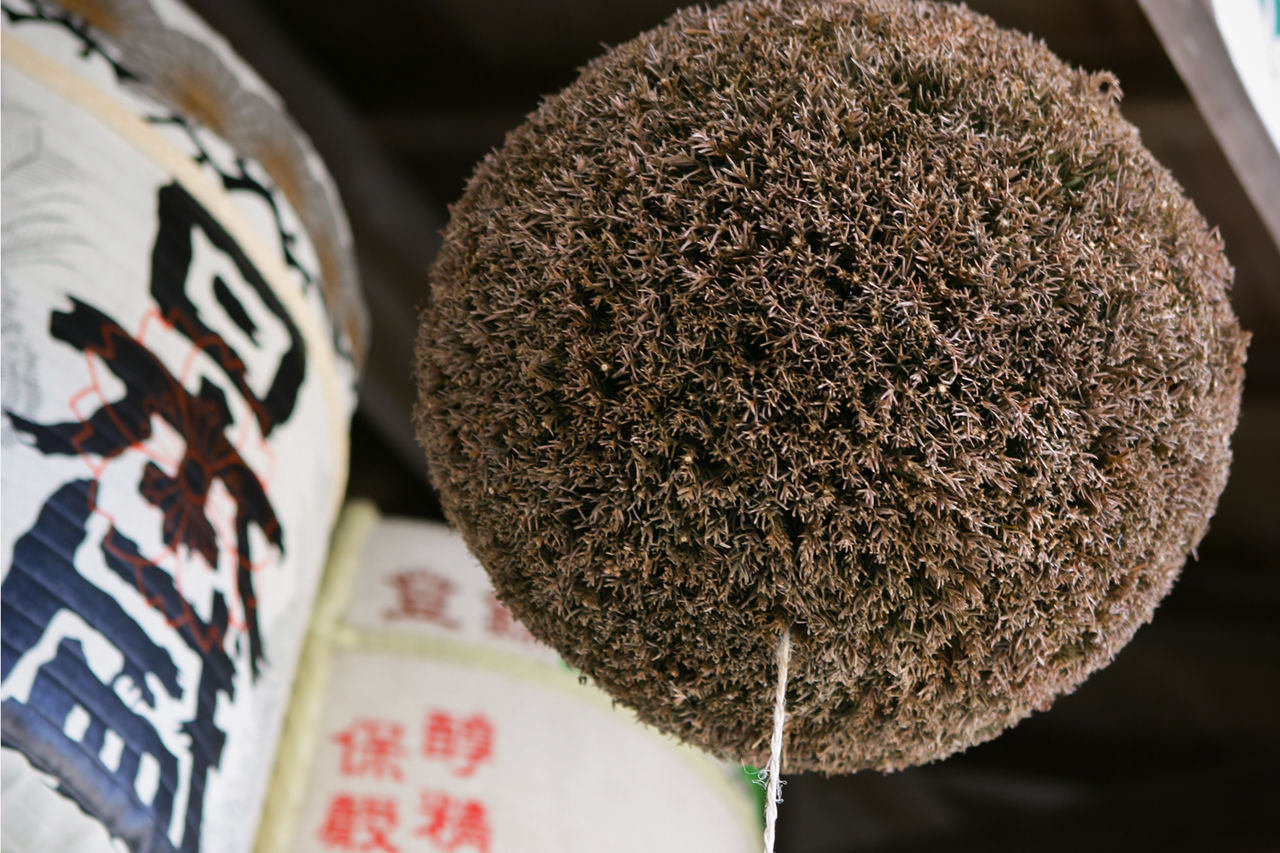 The sugidama cedar ball is hung out under the eaves at breweries—and often at Japanese bars serving sake—to signal that a new brew is ready.

(Originally published in Japanese. Text by Toya Manabu. Photographs by Nakano Haruo. Banner photo: The torii at the entrance to the haiden worship hall.)