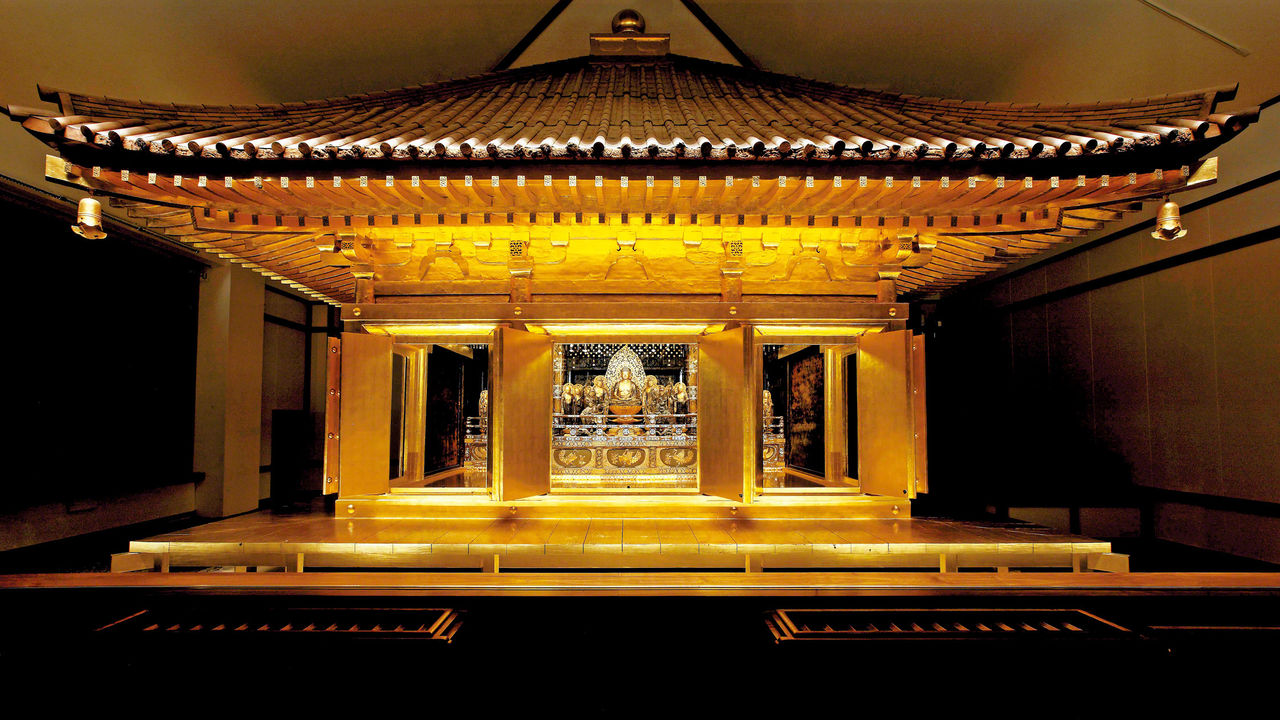 Jul 19, 2018
Hiraizumi, in what is now Iwate Prefecture, was a rare medieval city modeled on Pure Land Buddhist principles. Chūsonji temple’s dazzling Konjikidō hall is a match for the great temples of Kyoto, and over 3,000 of its treasures are preserved on-site in the Sankōzō Museum.

It was the first head of the Ōshū Fujiwara clan, Kiyohira, who began work on Hiraizumi in the late eleventh century. Having lived through the misery of war, he sought to aid the repose of its victims’ souls and restore peace to the land. Kiyohira set about creating a Buddhist paradise on earth, and a golden age of peace and prosperity continued in Hiraizumi for three generations of his line. It all came to an end, however, with the conquest of the Ōshū Fujiwara by the Kamakura-based warrior leader, Minamoto no Yoritomo, in 1189. Despite the destruction of those battles, many gilded halls, pagodas, and elaborate gardens designed on Buddhist principles remained in Hiraizumi—as they do to this day, as proof of the city’s rich past. 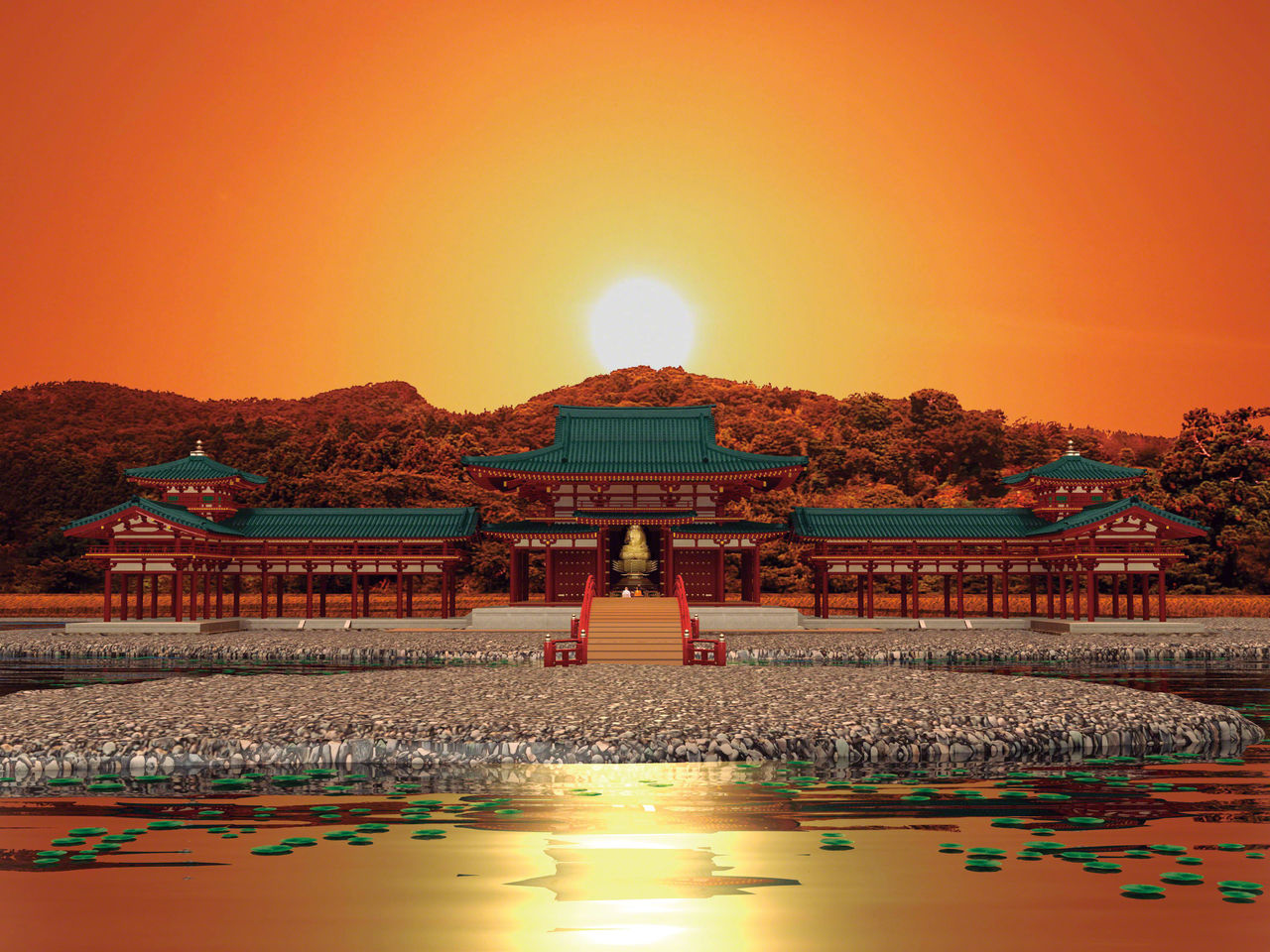 A computer-graphic recreation of the World Heritage sites Muryōkōin and Mount Kinkei as they would have looked in Hiraizumi’s heyday. (© Hiraizumi Board of Education) 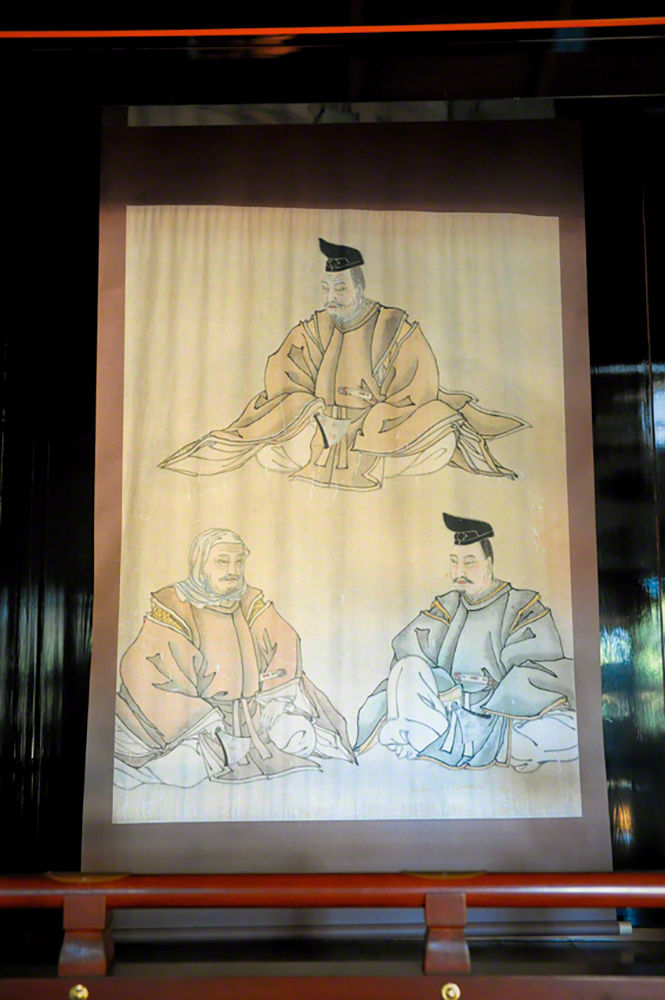 Chūsonji is the most famous of the World Heritage sites in Hiraizumi. It was built over some 20 years by Fujiwara no Kiyohira to comfort the souls—enemy and ally alike—of those who had fallen in the many wars preceding its construction. The approach to the temple, called Tsukimizaka, or moon-viewing slope, is lined with Japanese cedar trees three to four centuries in age, and features a lookout point with panoramic views of Hiraizumi city. Farther along the path lie numerous structures that formed part of the original temple precinct, including the temple’s main hall, rebuilt in 1909, the Hakusan Shrine nō stage, which still hosts performances each August, and a sutra repository rebuilt in the Kamakura period (1185–1333) using materials from the time of its original construction. 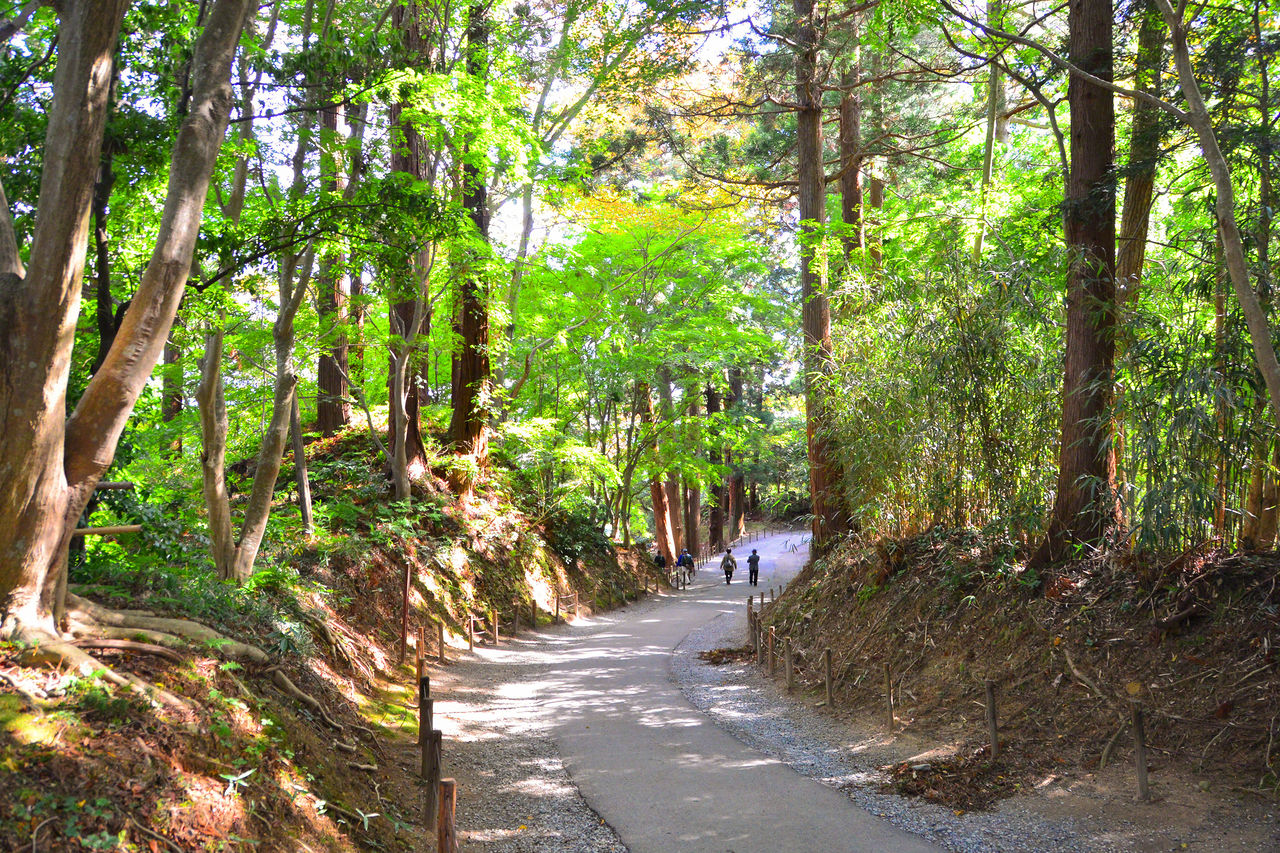 The Tsukimizaka path stretches for around a half-kilometer. 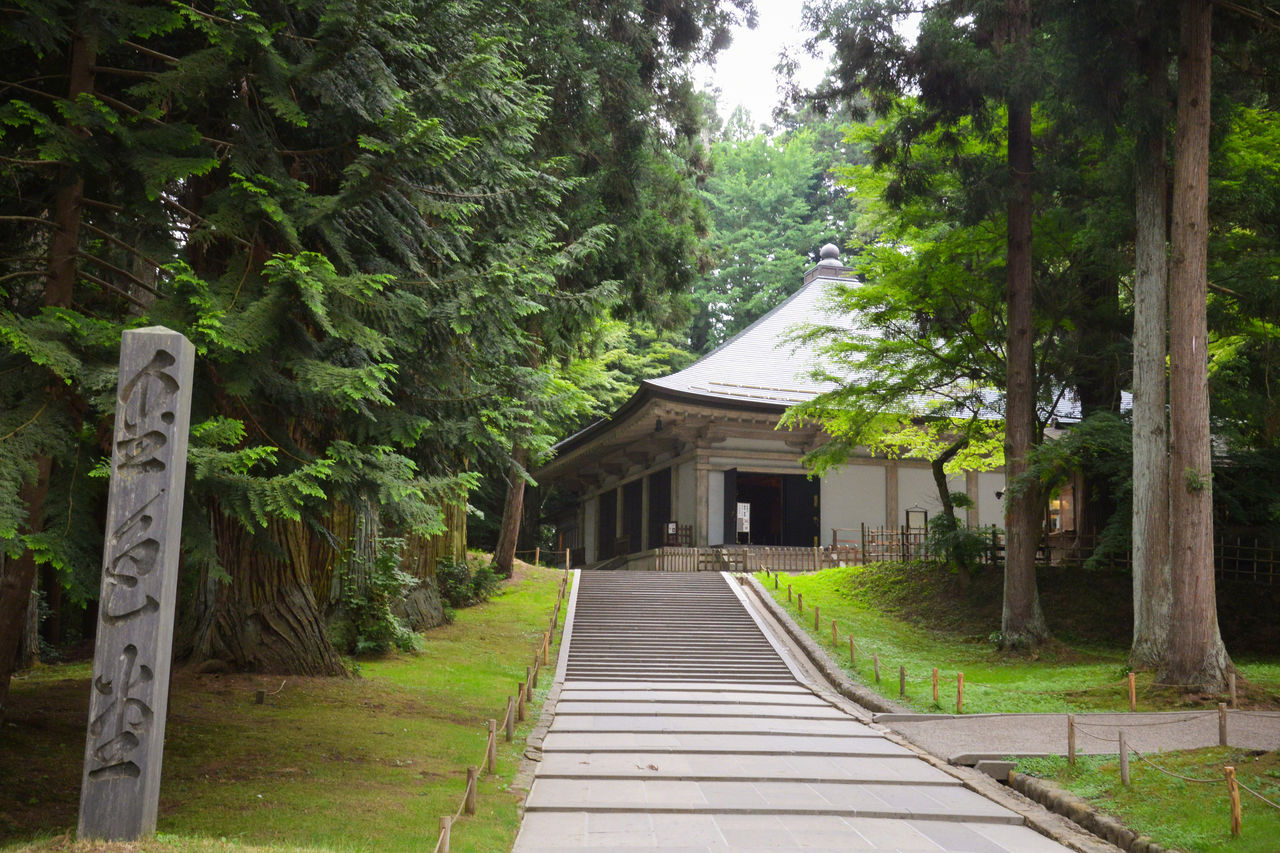 Undoubtedly the most striking presence among the structures dotting the Chūsonji site is the only one to have survived in its original form, the Konjikidō hall. Its pyramidal roof is sheathed entirely in gold leaf inside and out, and it fittingly holds the remains of the four Ōshū Fujiwara leaders, Kiyohira, Motohira, Hidehira, and Yasuhira. It is exquisitely decorated with the finest of lacquer, ivory, mother-of-pearl, and other craftwork that was funded by the region’s gold- and horse-derived wealth. The Konjikidō is now surrounded by a concrete structure to protect it from the elements. 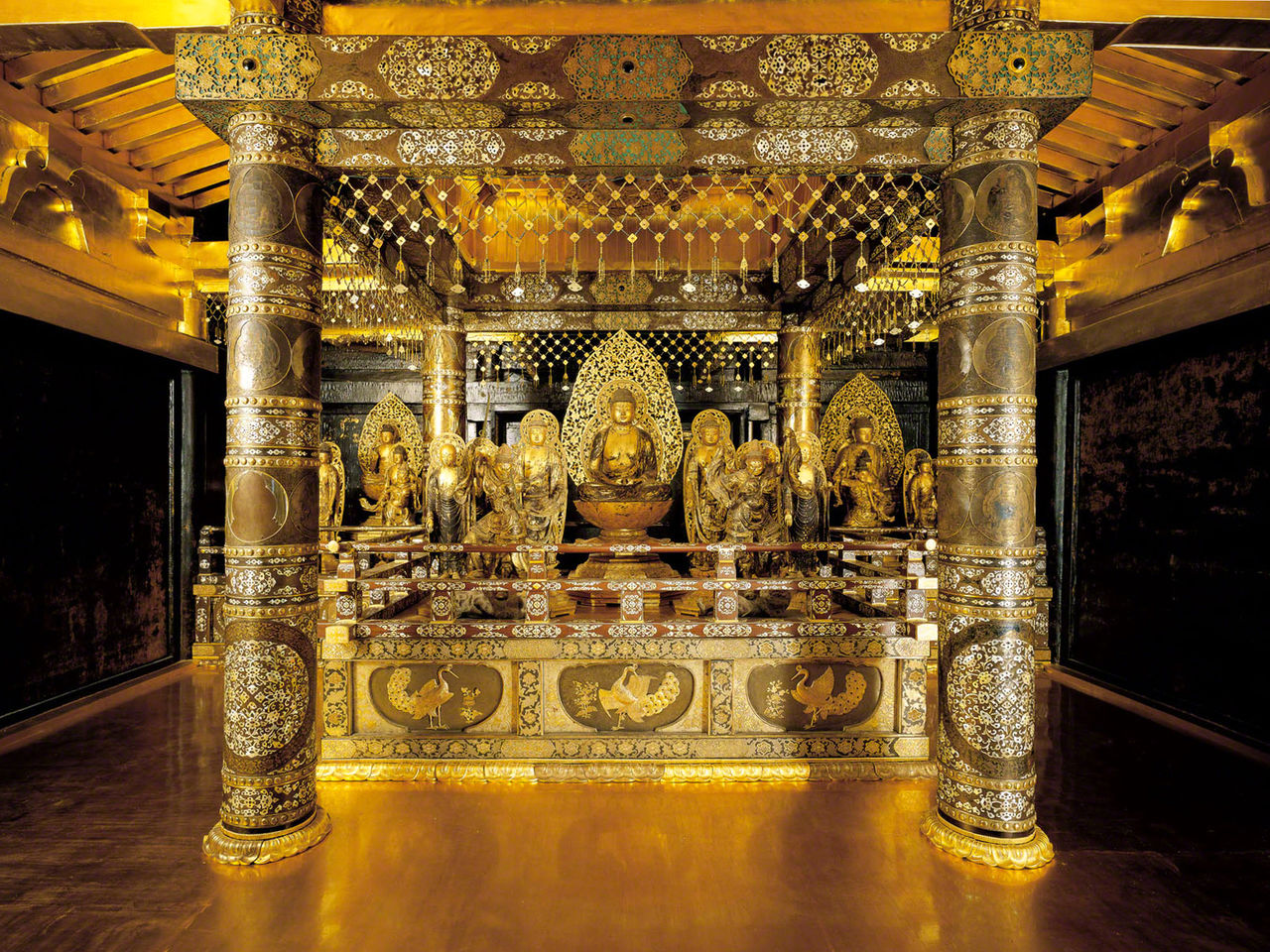 The Konjikidō is a treasure trove of fine ornamentation in mother-of-pearl inlay, ivory, and lacquer. (© Chūsonji)

The Sankōzō Museum located across from the Konjikidō is also not to be missed. It houses over 3,000 National Treasures and Important Cultural Properties, including the principal Buddhist image of the Amida Nyorai (Buddha of Infinite Light), from the main hall, and two Jōroku Buddha images dating back to the Heian period (794–1185). There are also illustrated and transcribed sutras among other items that reflect the sophisticated level of Buddhist art bequeathed to us by the Ōshū Fujiwara. 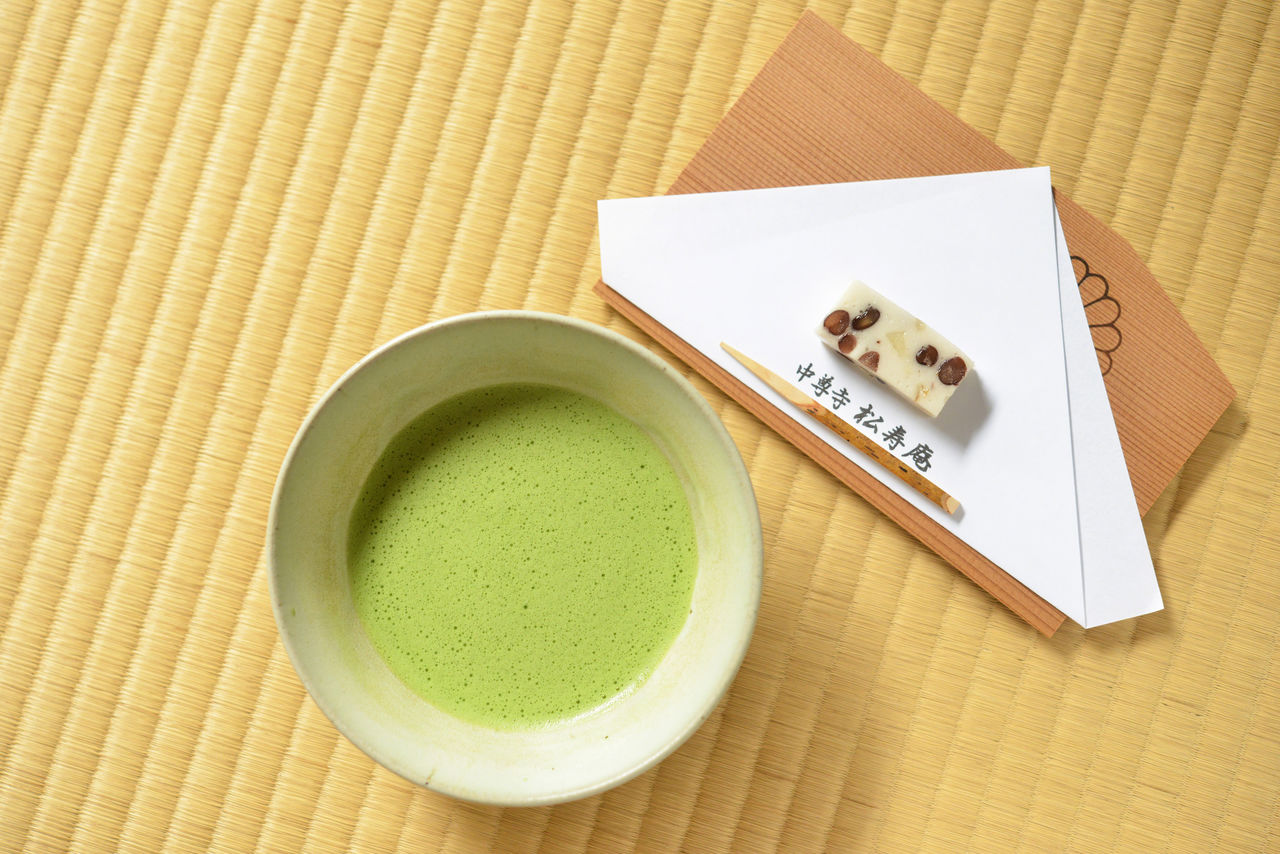 Take a break with a bowl of matcha and a Japanese sweet.

Next to the main hall in the temple grounds is a serene teahouse called Shōjuan, whose spare design offers the perfect place for a calming break. Sit and enjoy a bowl of matcha and a Japanese sweet after climbing Tsukimizaka.

(Originally written in Japanese. Banner photo: The Konjikidō is sheathed in gold leaf inside and out. © Chūsonji. Reporting and text by Shoepress.)