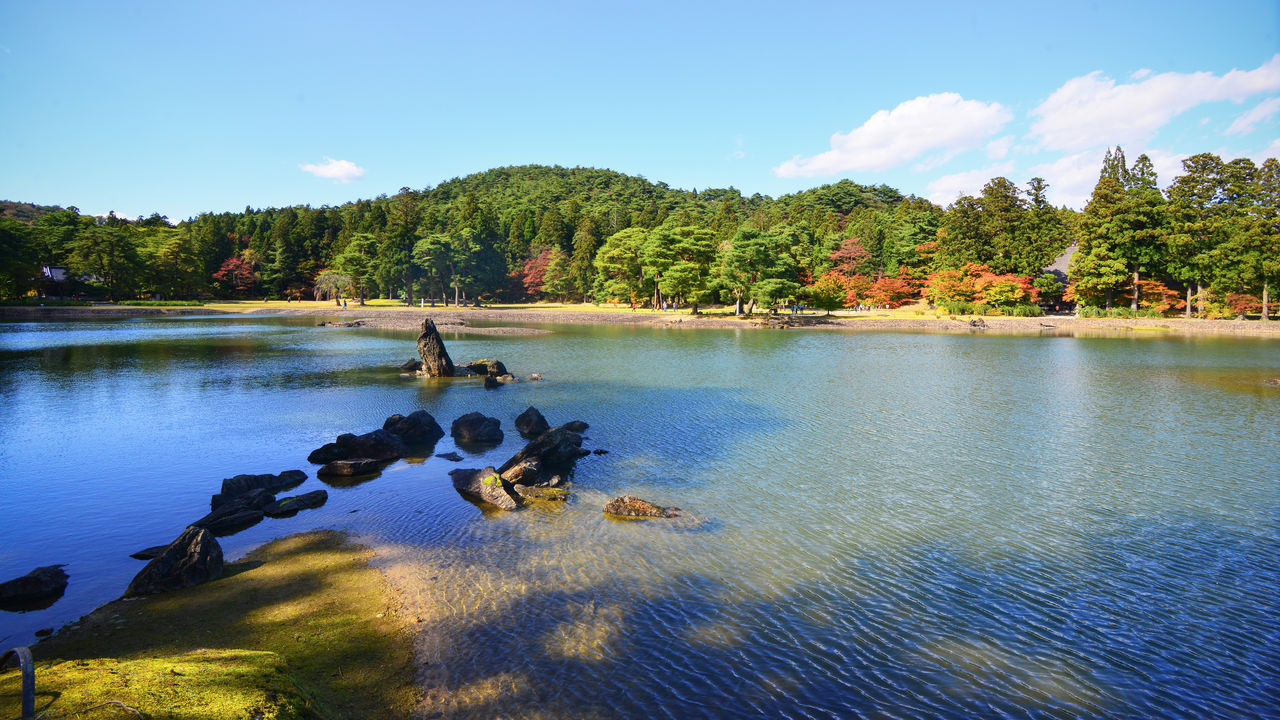 Jul 5, 2018
Mōtsūji is a World Heritage–listed temple in Iwate Prefecture steeped in history. It boasts a magnificent Pure Land Buddhist garden and offers Zen meditation and sutra transcription sessions to focus the mind and spirit.

One of Japan’s Most Sacred Sites

Hiraizumi, in northern Iwate Prefecture, obtained World Heritage registration in 2011 for five temples, gardens, and archaeological sites representing the Buddhist Pure Land. One of the key sites among them is the temple Mōtsūji. Its establishment in 850—along with that of another listed site, Chūsonji—is attributed to an abbot of the Tendai sect, Ennin (Jikaku Daishi). 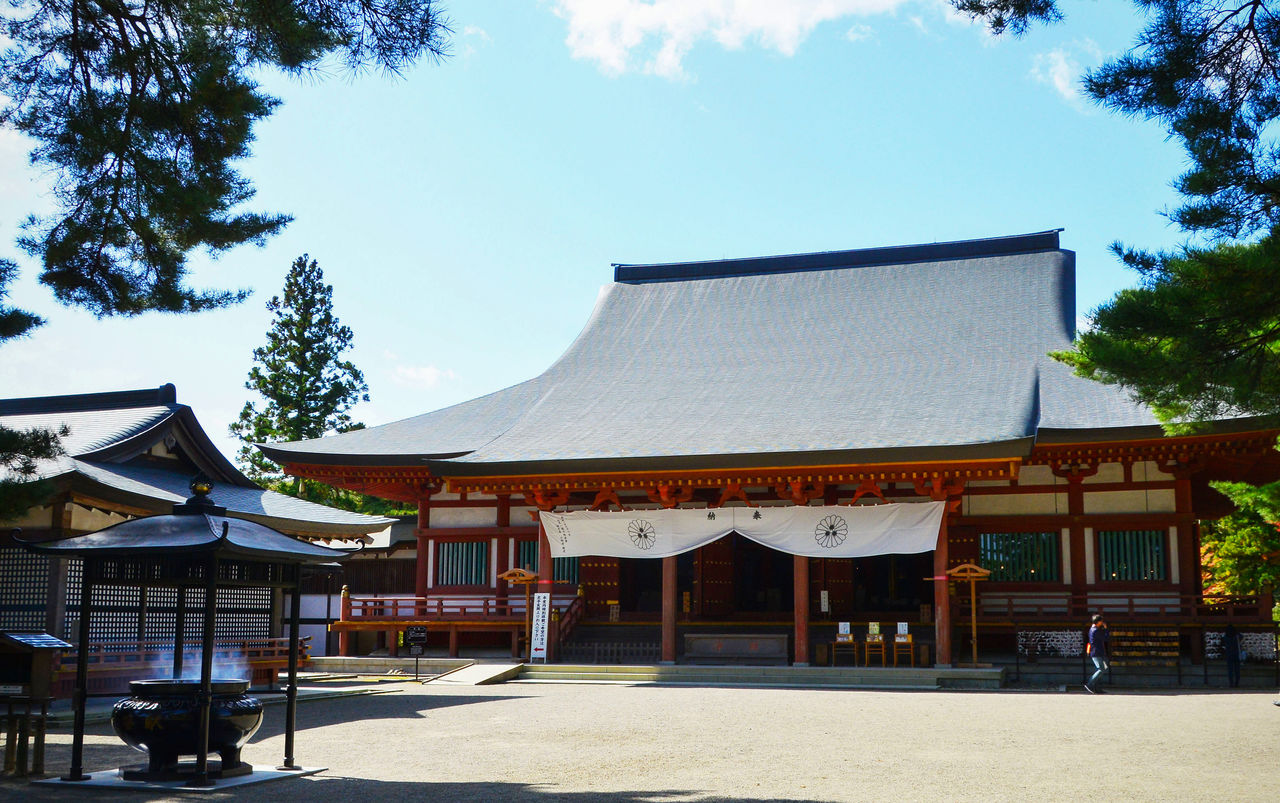 Mōtsūji eventually fell into disrepair until the mid-twelfth century (late Heian period) when the second head of the ruling Ōshū Fujiwara clan, Motohira, took on its reconstruction. Motohira’s father had envisioned creating a peaceful land based on Buddhist principles in Hiraizumi, and his son did not hesitate to pour large sums from the area’s substantial gold mining profits into realizing his father’s dream.

Motohira commissioned the renowned Kyoto-based sculptor, Unkei, to carve the principal image for the original main hall of Mōtsūji, the Kondō Enryūji. In the three years it took to complete, Motohira sent vast quantities of gold dust, silks, and other treasures to Unkei in payment. But when the image of the healing Buddha, Yakushi Nyorai, was finished, retired Emperor Toba was so moved by the sculptor’s masterpiece that he forbade its removal from the capital. An aggrieved Motohira shut himself up in the temple, refused to eat, and prevailed on the Emperor’s chief advisor to intervene on his behalf until finally Unkei’s sculpture was delivered to Hiraizumi.

Motohira’s son continued the reconstruction of Mōtsūji after his death, and at its peak, the temple housed over 40 buildings and more than 500 monasteries. The Azuma kagami, a historical record compiled in the late thirteenth to early fourteenth centuries, describes it as “a sacred site unparalleled in majesty.” 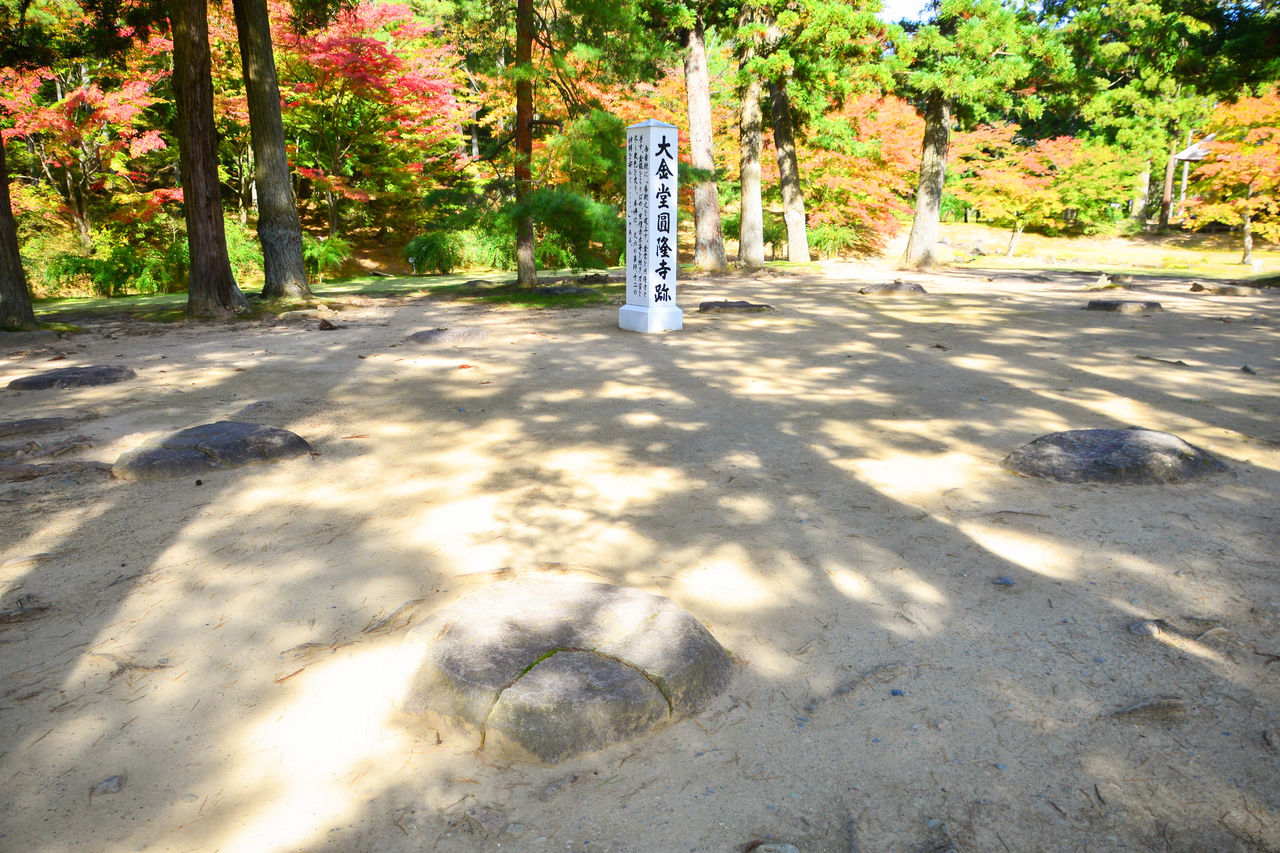 Mōtsūji endured countless fires over the ensuing years, and ultimately every one of its buildings—along with Unkei’s famous Yakushi Nyorai image—were consumed by flames. We can nevertheless still see traces of its original design from structural foundations and other remains, as well as its Heian-period-style Pure Land Garden.

The Cultural Assets Repository located just inside the temple’s main gate displays Heian-period Buddhist images, excavated artifacts, research materials, and other items related to the temple and its history. It is well worth paying a visit on the way in to help you visualize the original temple complex as you explore the site.

Strolling Through a Garden Paradise 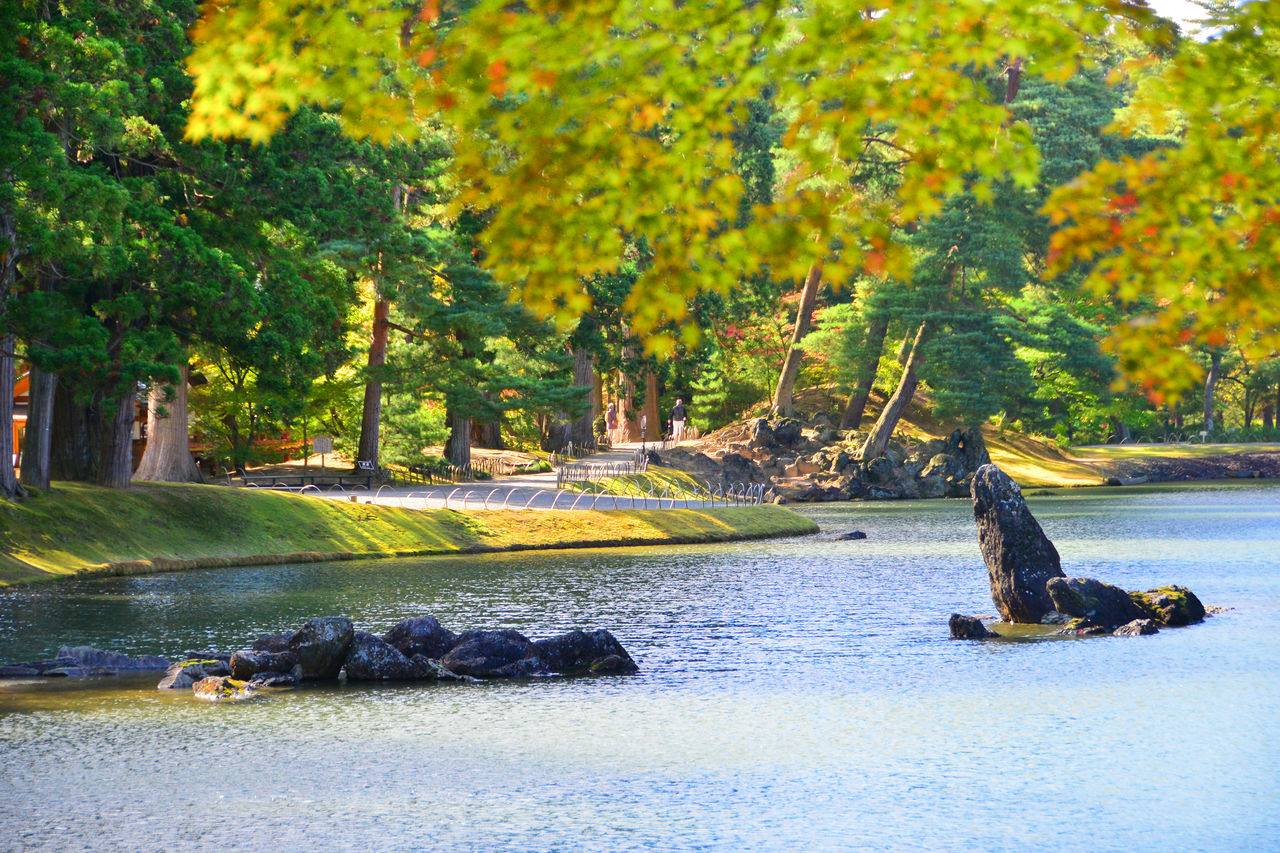 The rocky islet sits at right in Ōizumi-ga-Ike, a pond in the Pure Land Garden.

Successive generations of the Ōshū Fujiwara clan aspired to create a Buddhist Pure Land paradise on Earth in Hiraizumi. The Pure Land Garden they constructed based on Japan’s oldest landscape gardening text, dating back to the Heian period, is an exquisite incarnation of this aim. The garden’s centerpiece is the 180-meter by 90-meter pond, Ōizumi-ga-Ike, which features a mountain-like, rocky outcrop (a dry landscape or karesansui element), a stone-covered beach element, and an islet with a two-meter-high rock jutting up prominently at an angle. The latter has become a symbol of the garden. 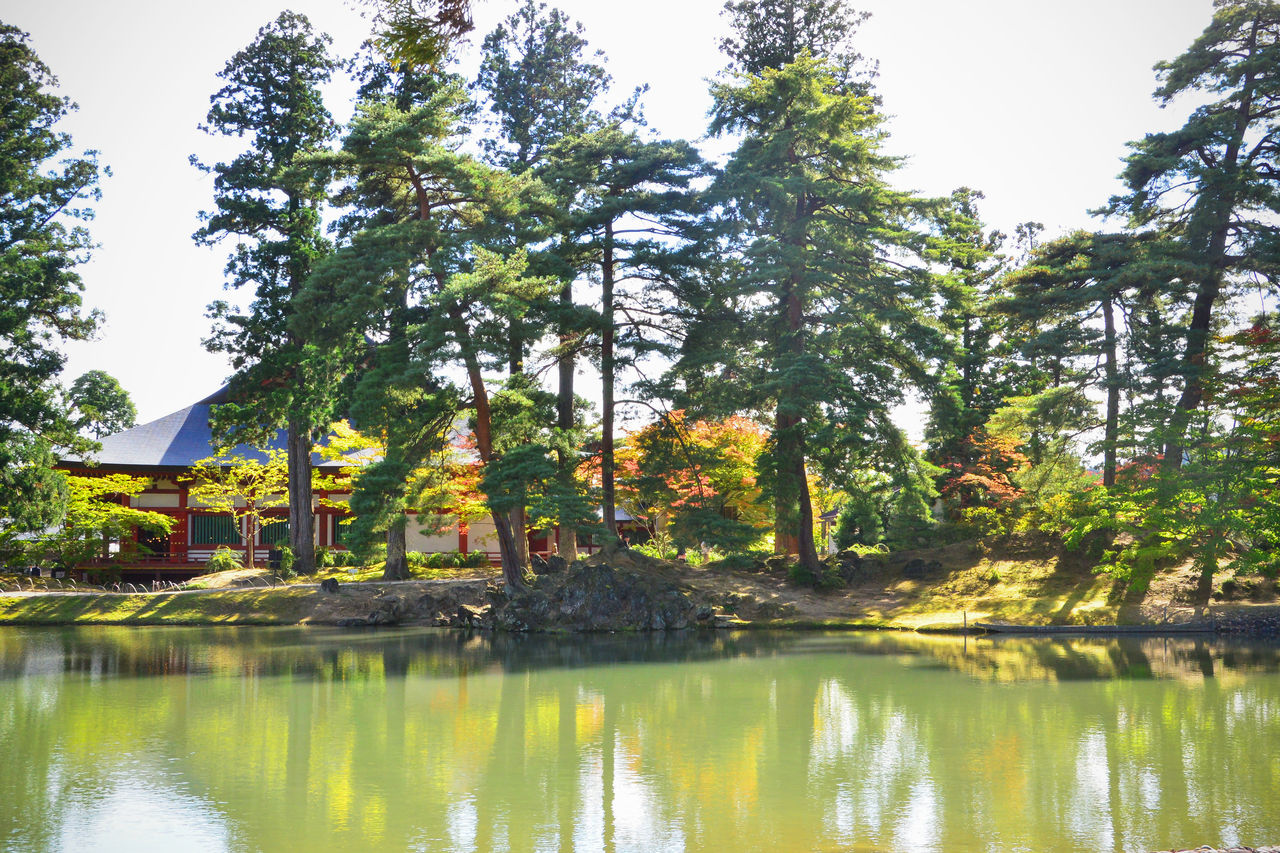 The Main Hall stands near the rocky outcrop on the shore of Ōizumi-ga-Ike.

Feeding the pond is a meandering, 80-meter long feeder stream, or yarimizu in Japanese, which is a precious remnant of the original Heian-period garden. If you stroll along it with your eyes on the garden, you will appreciate how its clever design affords perfect views of the surrounding mountains and natural features in a form of borrowed landscape. 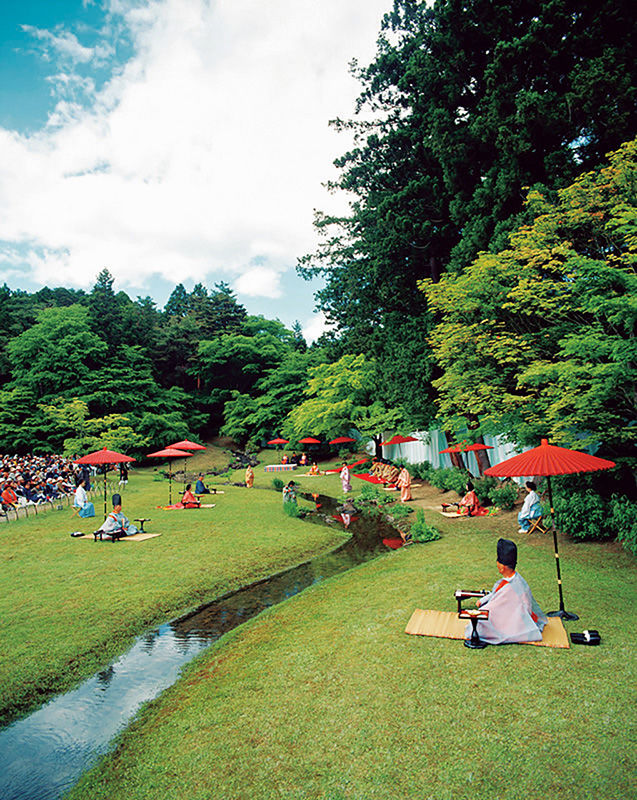 Every May, a traditional poetry gathering, the Gokusui no En, is held
by the stream’s winding waters with participants in Heian period costume. (© Mōtsūji) 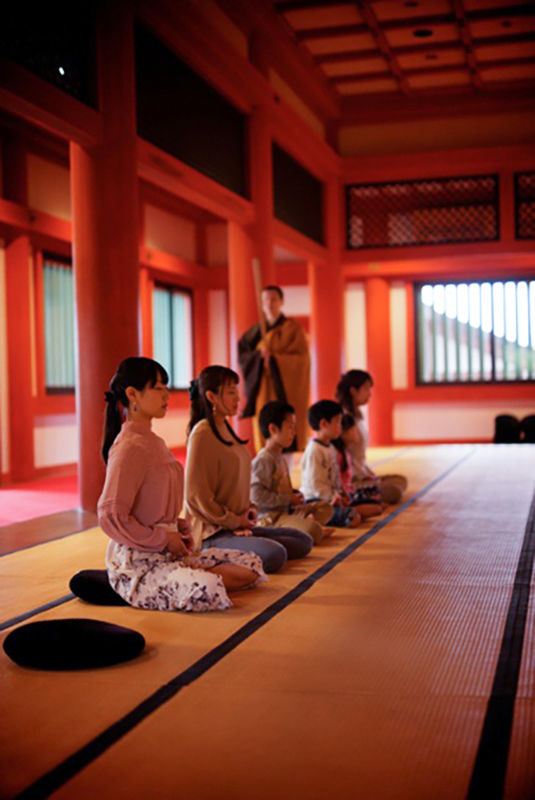 Zazen meditation and Buddhist sutra transcription sessions are held regularly in Mōtsūji’s Main Hall. Sitting upright and slowing your breath in seated meditation can be calming and improve your concentration, while copying out Buddhist sutras character by character may improve your Japanese writing skills as well as discipline your mind. 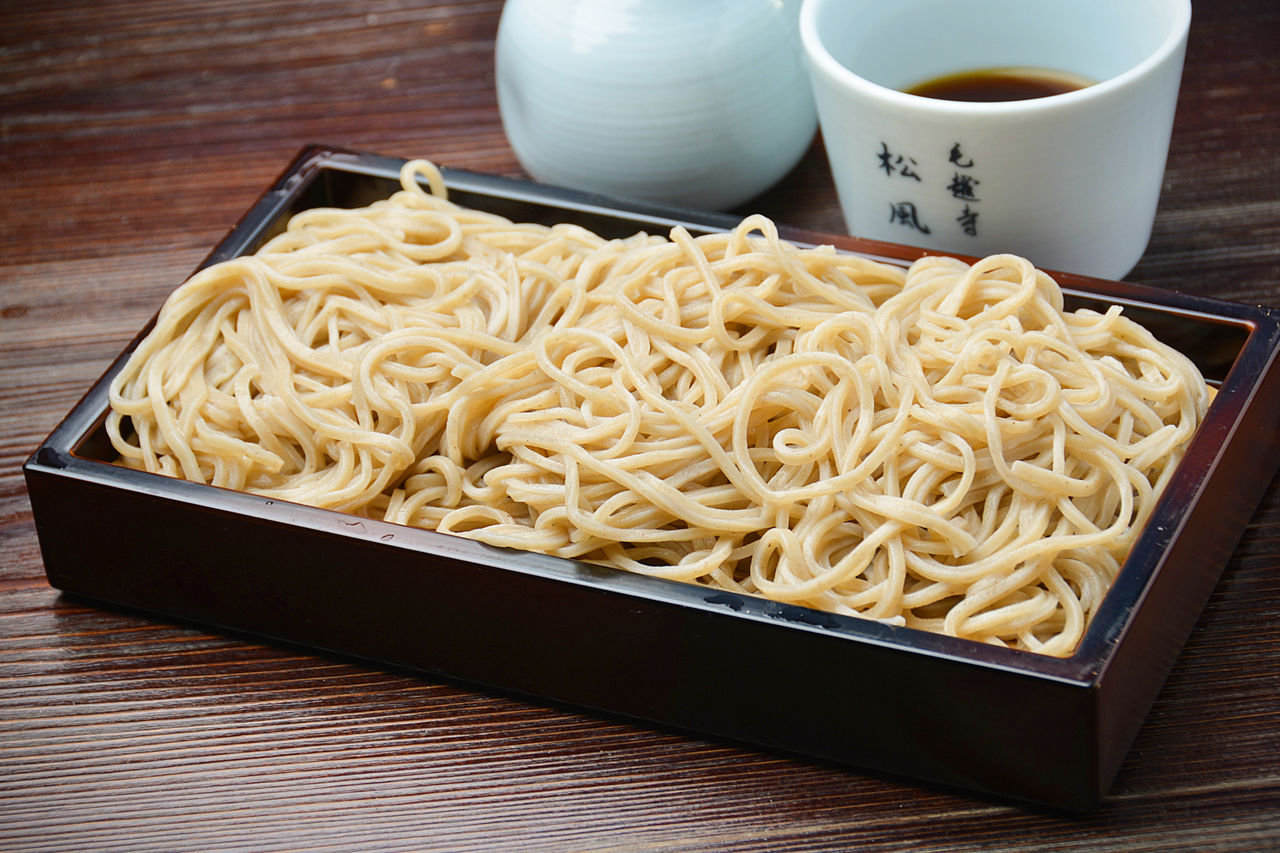 Shōfūan is a restaurant located in the Mōtsūji grounds where you can try excellent soba noodles as well as a range of sweet dishes. The noodles are an aromatic blend of finely milled buckwheat from Hokkaidō and Yamagata that are silky smooth in texture. Also recommended are the sweet treats, such as dango or warabimochi dumplings, with a bowl of powdered green tea.