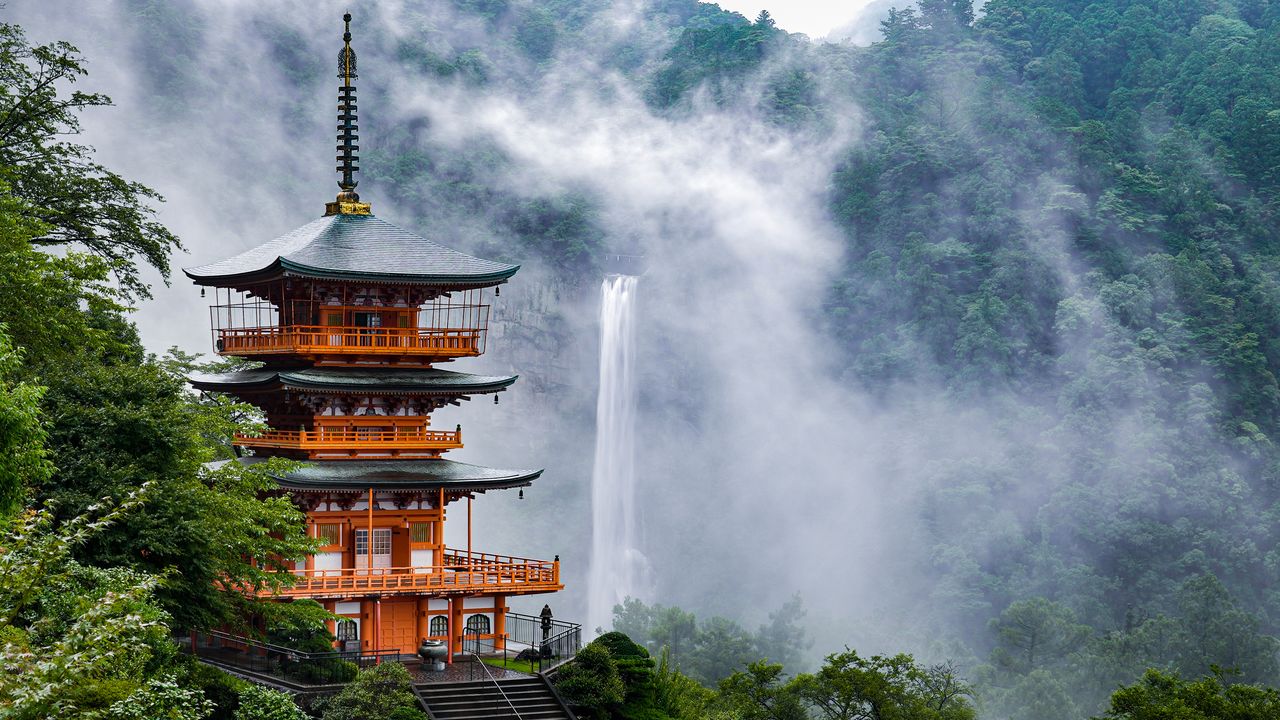 The National Parks of Kansai: From Mountain Trails Linking Holy Sites to Seascapes Both Rugged and Peaceful 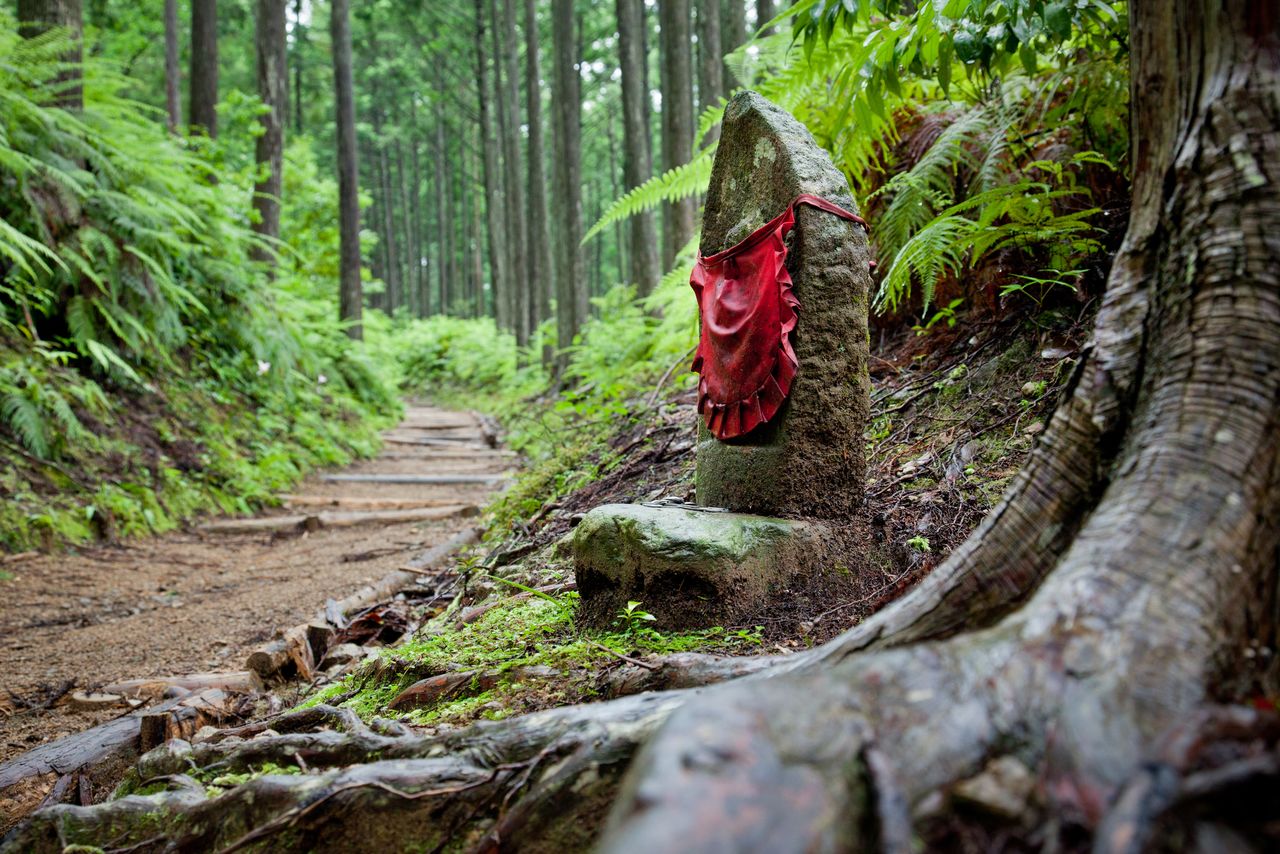 Yoshino-Kumano National Park covers the area from Mount Yoshino in the central part of the Kii Peninsula south to the Ōmine Mountains and the Ōdaigahara high plateau. It also includes the watersheds of the Kitayama River and the Kumano River, which are interspersed with breathtaking gorges, and at the southernmost point of the main island of Honshū, the shores off the Kumano Sea. The sacred sites and pilgrimage routes in the Kii mountain range, running between the temple of Kinpusenji in Yoshino and the Three Grand Shrines of Kumano, were selected for UNESCO World Heritage status in 2004.

Mount Yoshino in Nara Prefecture is famed for its cherry trees abloom in spring. Since the trees blossom at different times, starting with the lower-altitude shimo-senbon (lower thousand) and moving gradually to the naka-senbon (middle thousand) and the kami-senbon (upper thousand) at the summit, hanami flower-viewing, which debuts in early April, lasts for close to a month.

The 170-kilometer-long trail connecting Mount Yoshino and the Three Grand Shrines of Kumano was created by practitioners of shugendō ascetic religious training. The Ōmine Mountains consist of 1,915-meter Hakkyōgadake, the highest in the range, and several other peaks over 1,500 meters high. The Ōmine Okugakemichi running along the main ridge is a demanding route that tests even experienced mountaineers. 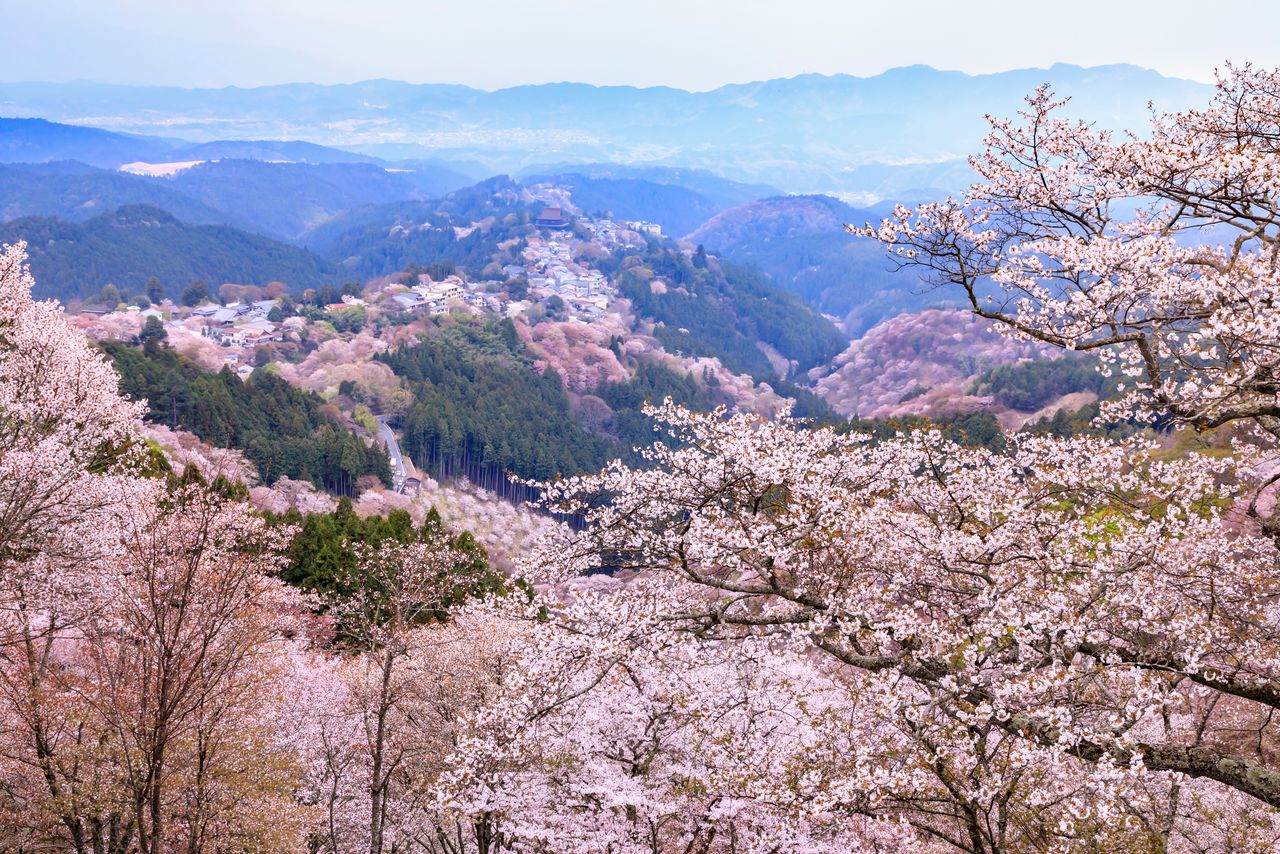 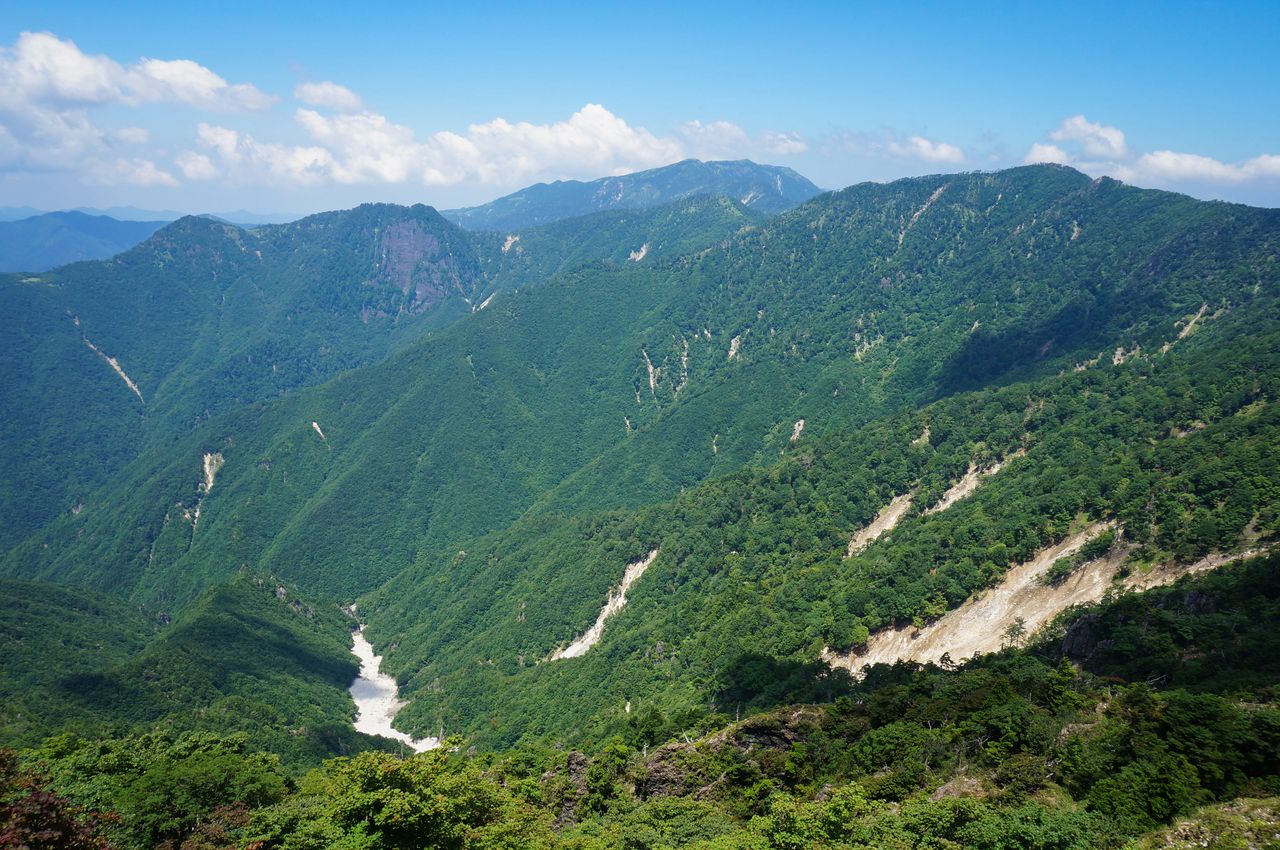 On the border of Nara and Mie Prefectures east of Mount Ōmine is Ōdaigahara, a mountainous area that is one of the rainiest places in Japan. Walking trails near the summit present awe-inspiring views of sheer cliffs and some of the most extensive primeval forests in the country. The Kitayama River, with its source in Ōdaigahara and Obagamine further to the west, winds through the Kii Mountains to merge with the Kumano River at Wakayama. The lower reaches of the river, in particular the V-shaped Dorokyō Gorge, are very picturesque, and the Doro-hatchō section in Shimo-doro has been designated a place of scenic beauty and a natural treasure. 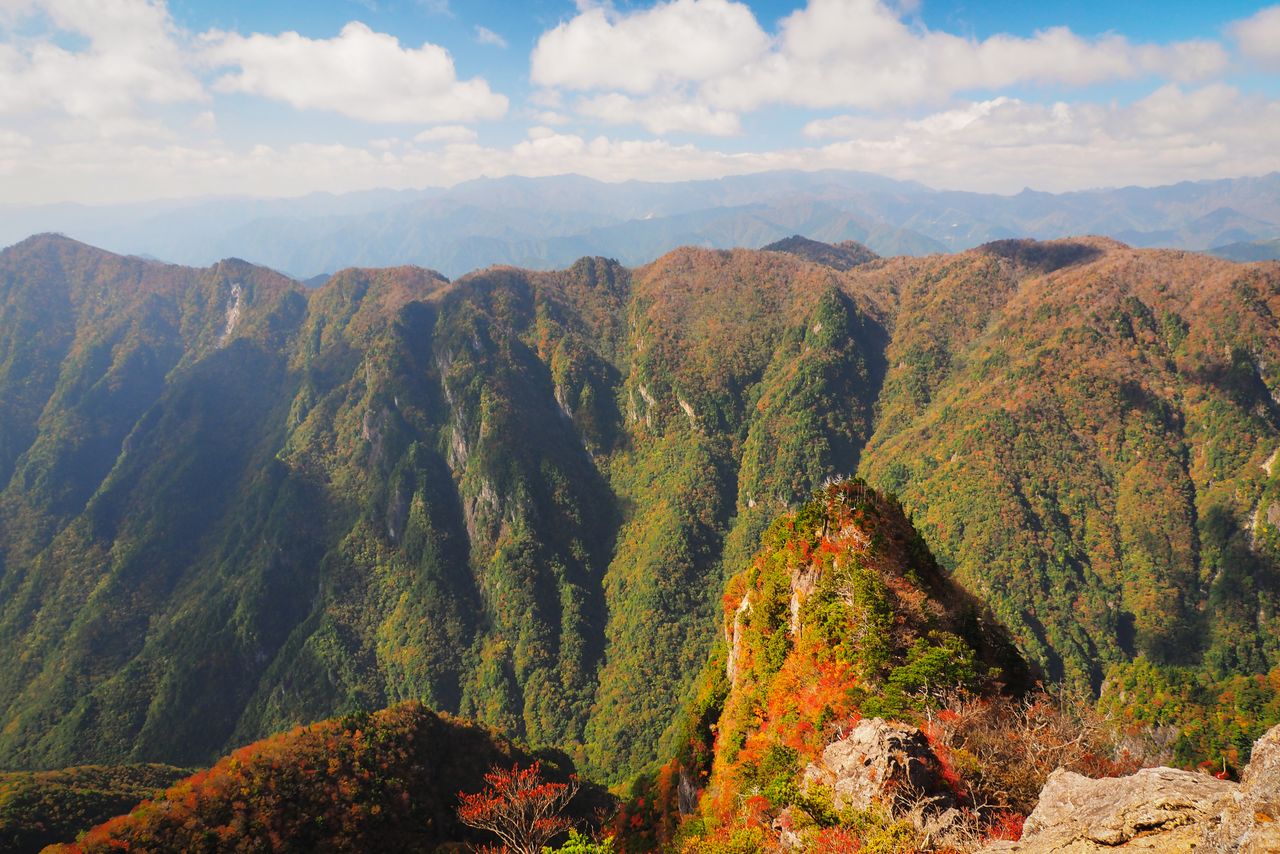 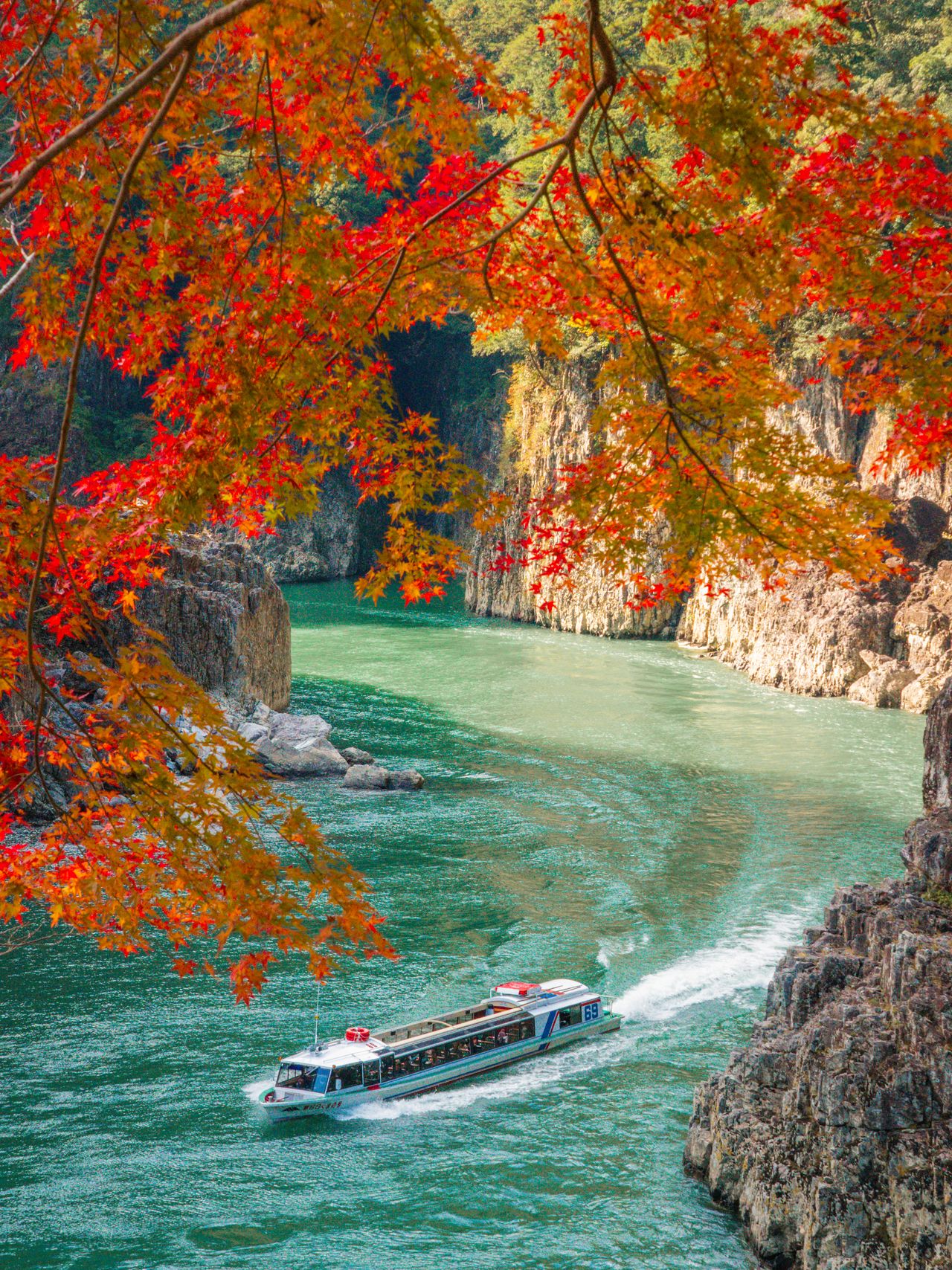 Kumano Hongū Taisha, Kumano Hayatama Taisha, and Kumano Nachi Taisha are collectively known as the Three Grand Shrines of Kumano. They attract worshippers year-round, who also take the opportunity to visit nearby sights like the Nachi Waterfall and the Kumano Hongū hot-spring spa. Along the shore at the southern end of the Kii Peninsula are scenic spots like Senjōjiki and Sandanbeki in Shirahama, and the Hashigui Rocks in Kushimoto. The area is also a favorite spot for divers, who can view coral and tropical fish in the warm waters. 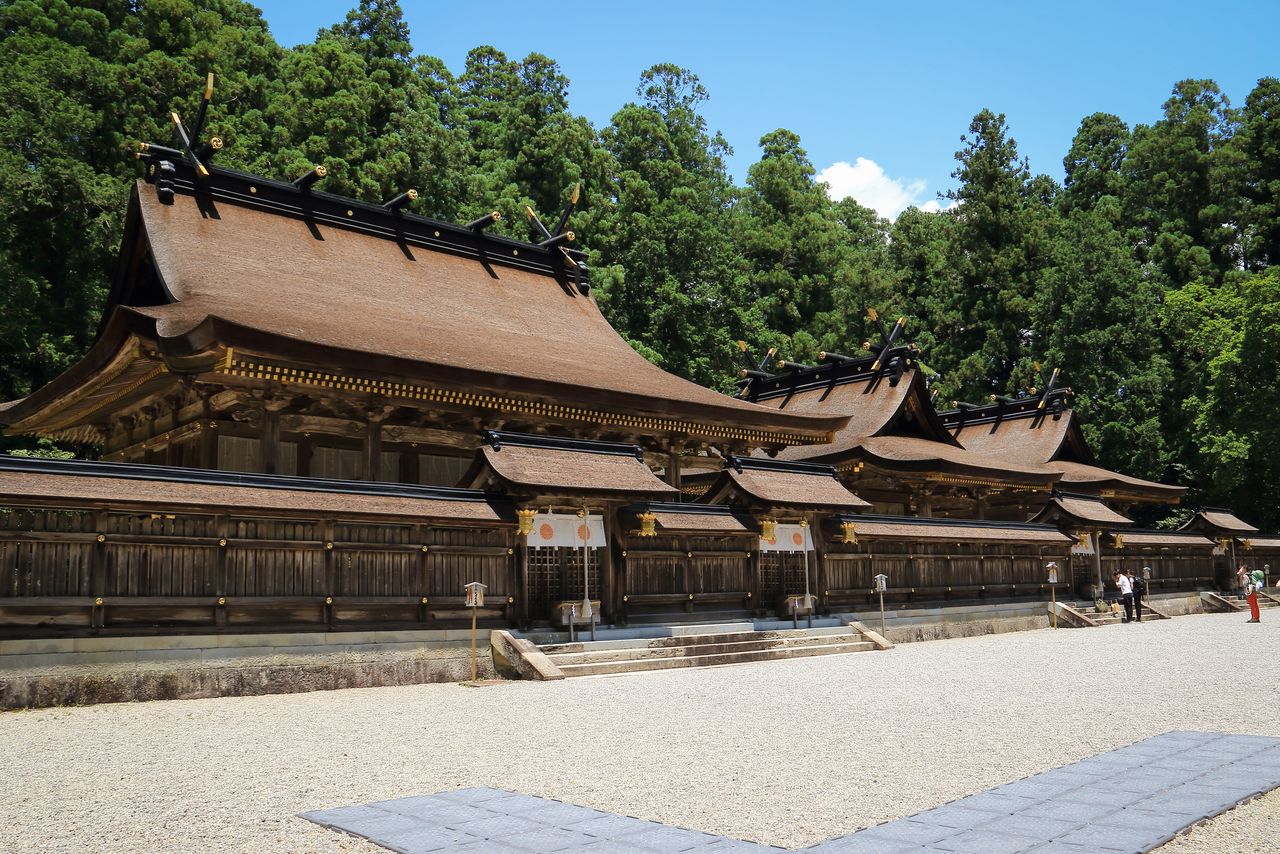 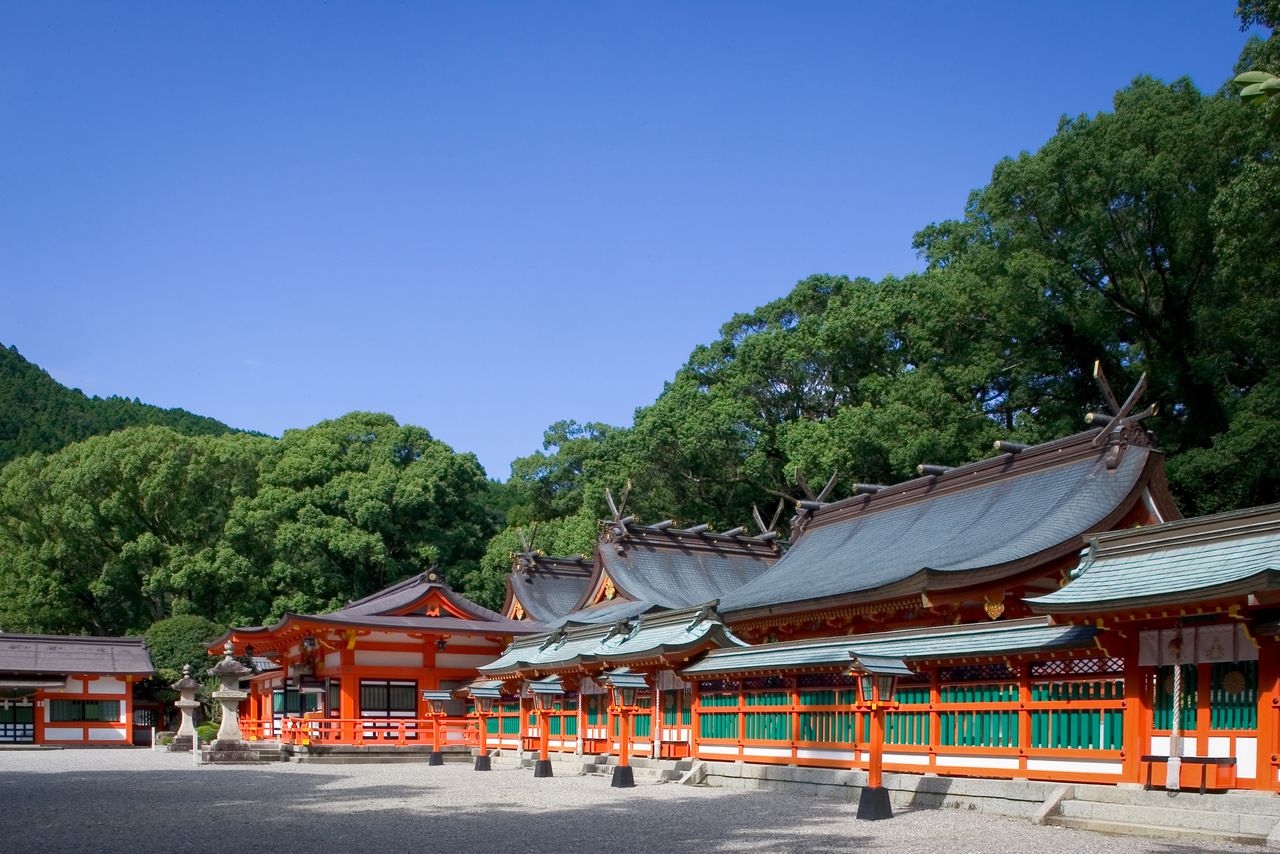 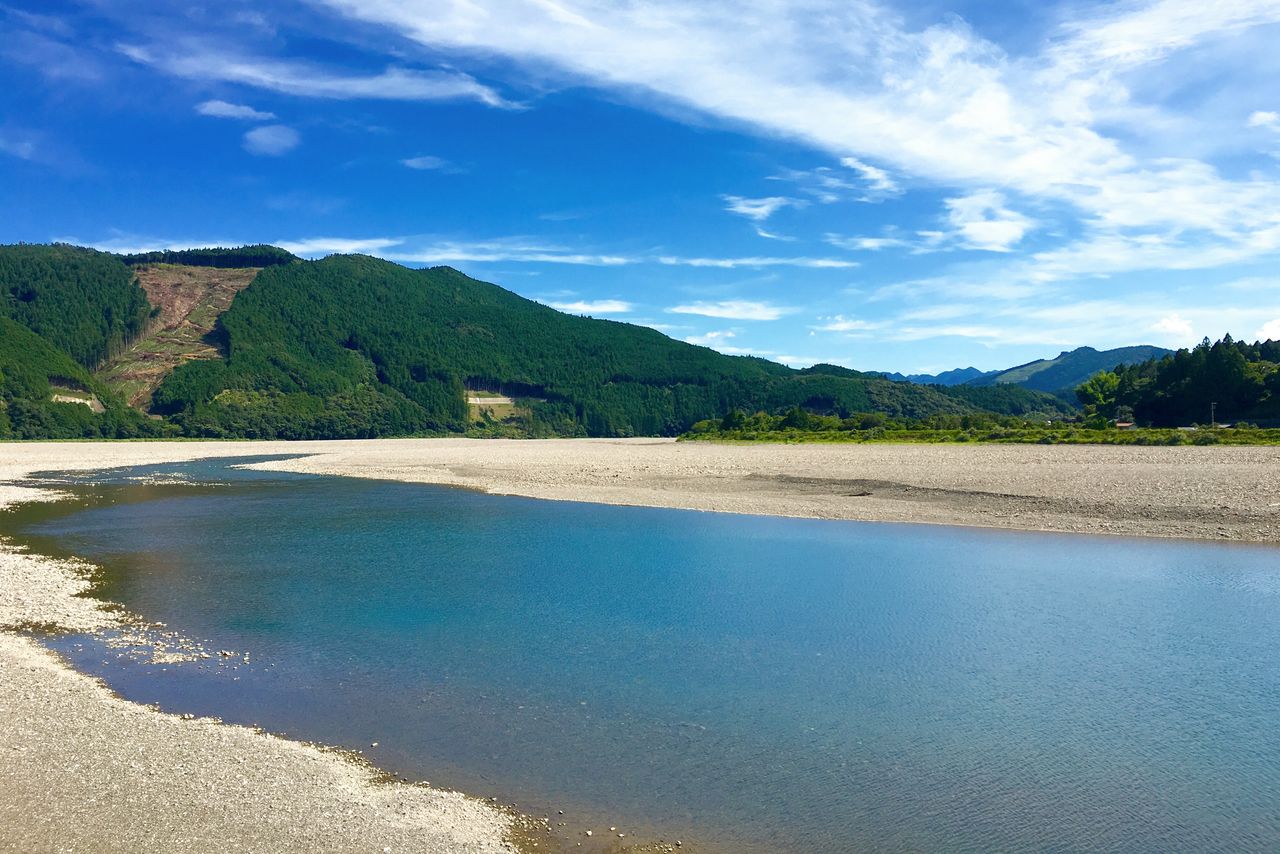 The Kumano River was once a vital mode of transportation on the Kumano Kodō pilgrimage route. (Courtesy Wakayama Tourism Federation) 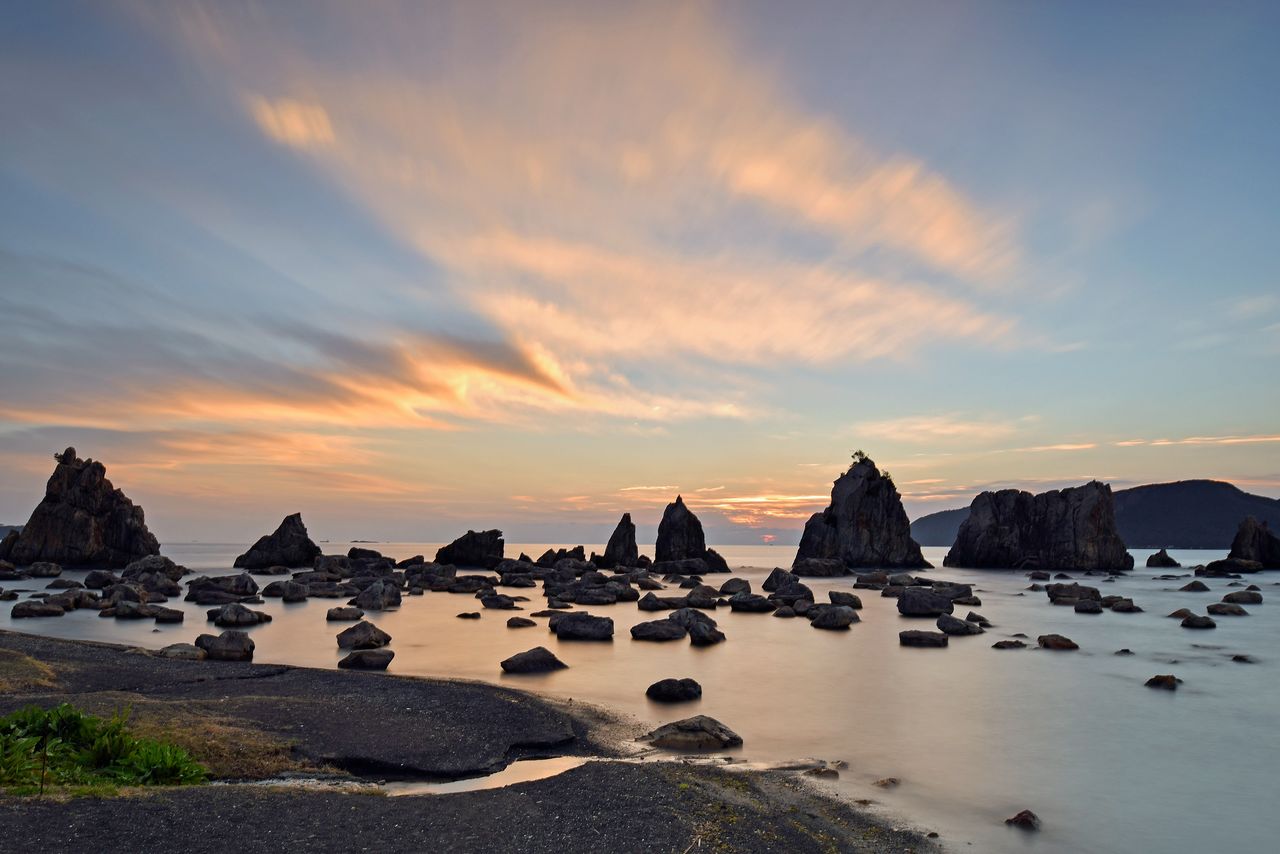 The Hashigui Rocks, a group of some 40 rock formations, off the coast in Kushimoto. (Courtesy Wakayama Tourism Federation) 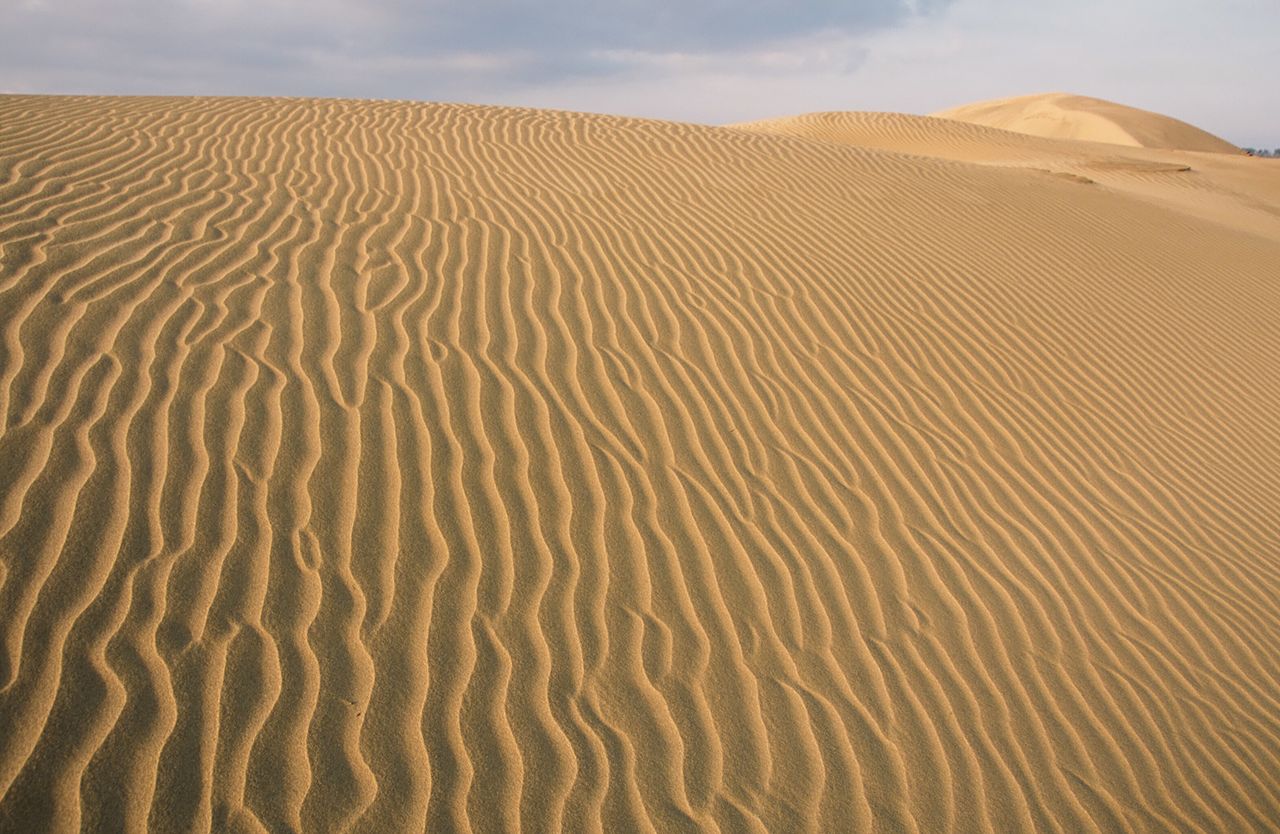 The San’inkaigan National Park stretches 75 kilometers along the Sea of Japan, from the western half of Kyoto Prefecture’s Tango Peninsula to the sand dunes of Tottori Prefecture. From eroded rock formations and rocky shoals to caves along the long ria coastline, there is plenty to see. The highlight of the coastal sights is in Tottori Prefecture, where a long stretch of dunes was formed from sand washed down from the nearby mountains by the Sendai River, which redeposited the grains along the coast as it flowed out to sea.

On the coastline of the Tango Peninsula are the coastal bench of Goshikihama, the beaches at the Tango dunes, a popular summer destination, and Shōtenkyō, a sandbar bounded to the north by the Sea of Japan and to the south by Kumihama Bay. 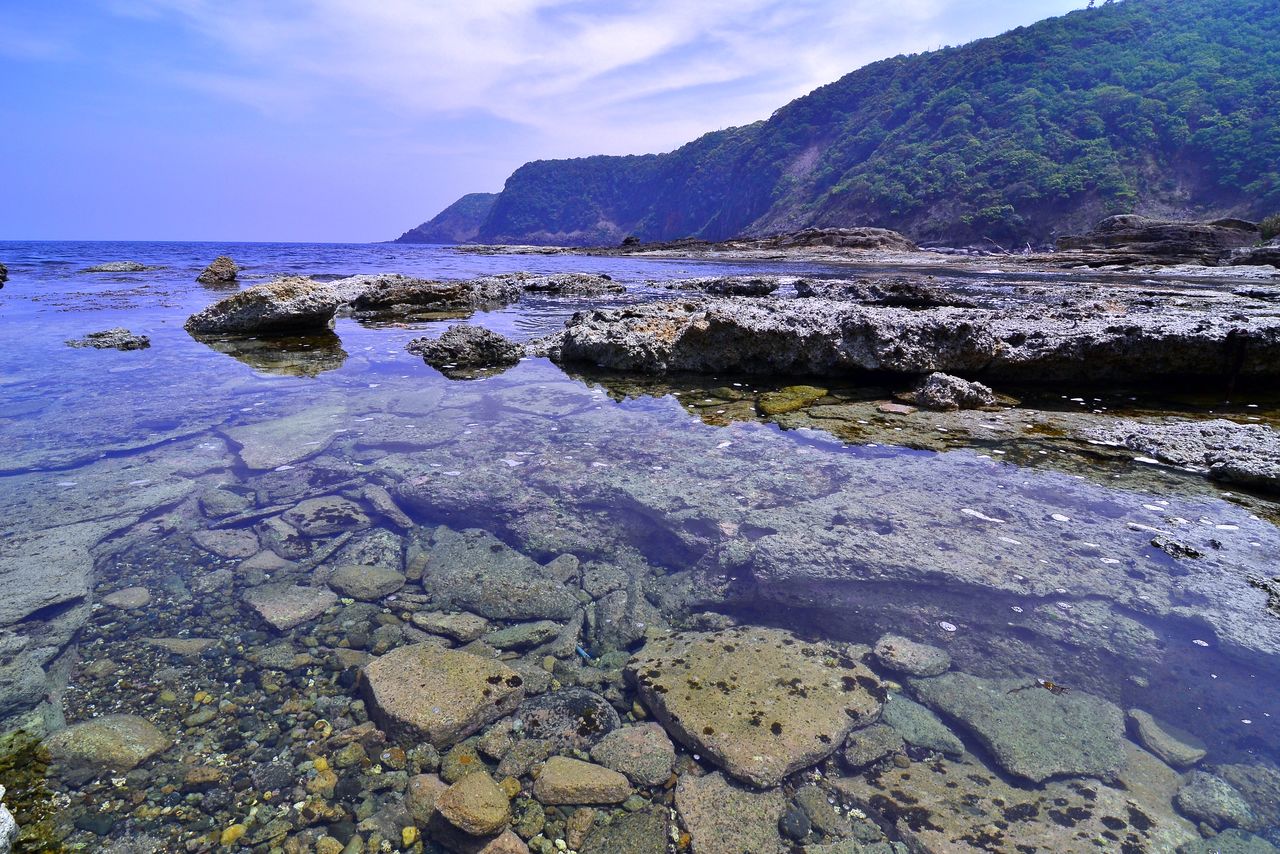 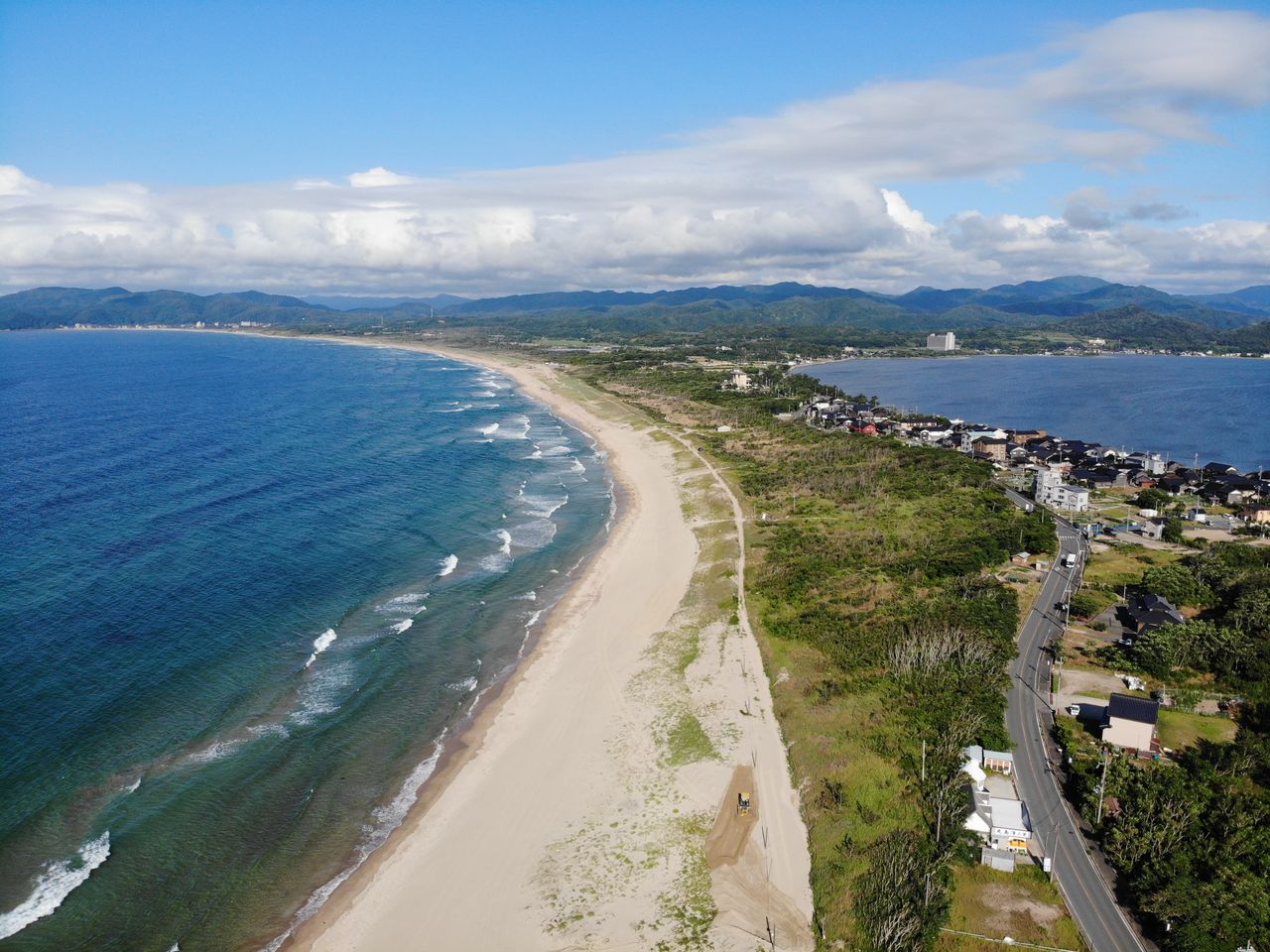 Shōtenkyō, sandwiched by the Sea of Japan on the left and on the right by Kumihama Bay, is a sandbar reminiscent of the more famous Amanohashidate. (© Pixta)

In the Tajima region of Hyogo Prefecture, impressive sights along the rocky coast include Hiyoriyama Beach, Anami Beach, the Hasakari Rocks, and the Asahi Sea Cave. Bathing beaches at Takenohama and Imagoura are favored by summer visitors. Off the coast of Tottori Prefecture, points of interest include the Natane Gotō Islands, Sengan-Matsushima, and rock reefs. 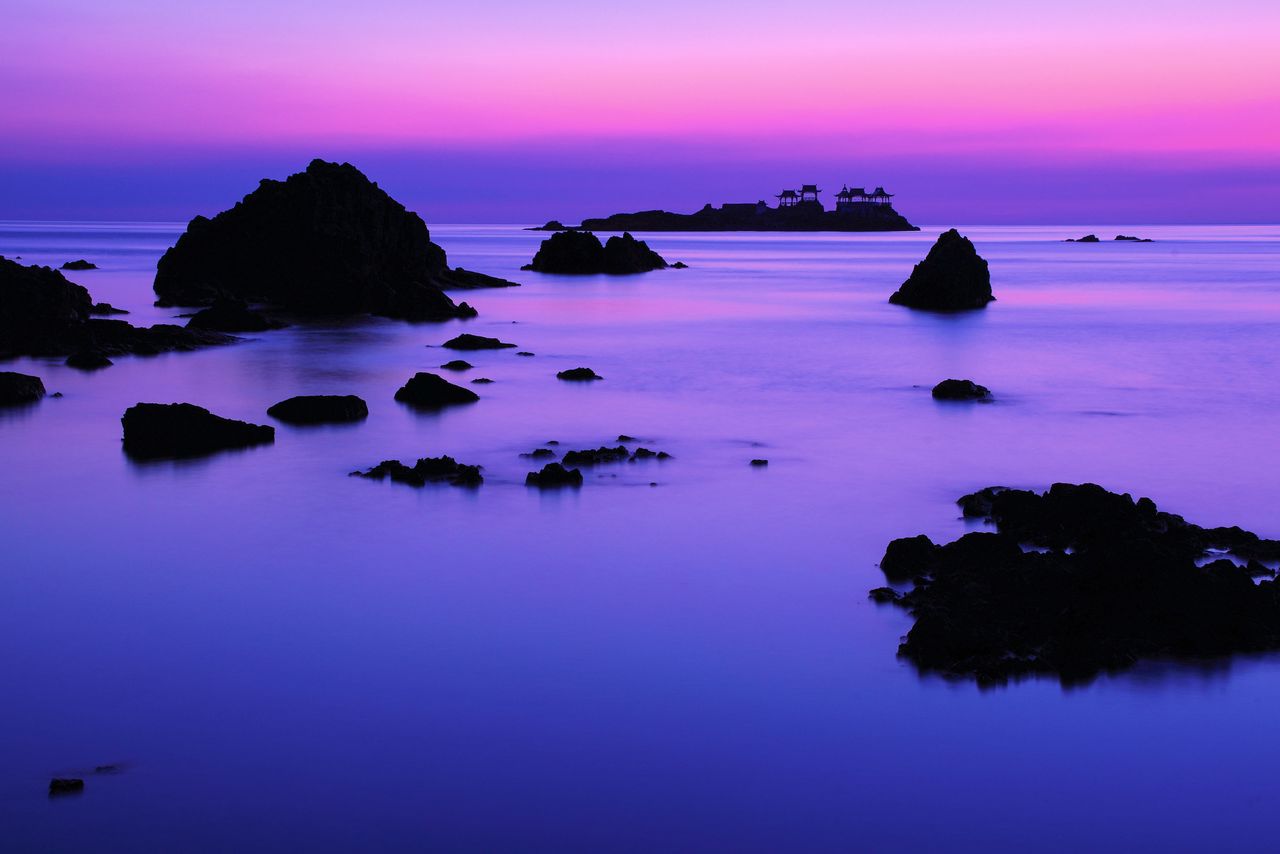 Overlooking rocky shoals from the cliffs at Hiyoriyama. The island with the pergola in the distance is the uninhabited Nochigashima, supposedly where Urashima Tarō, a character in a Japanese fairy tale, opened the forbidden jeweled box that instantly turned him into an old man. (Courtesy Hyōgo Tourism Bureau) 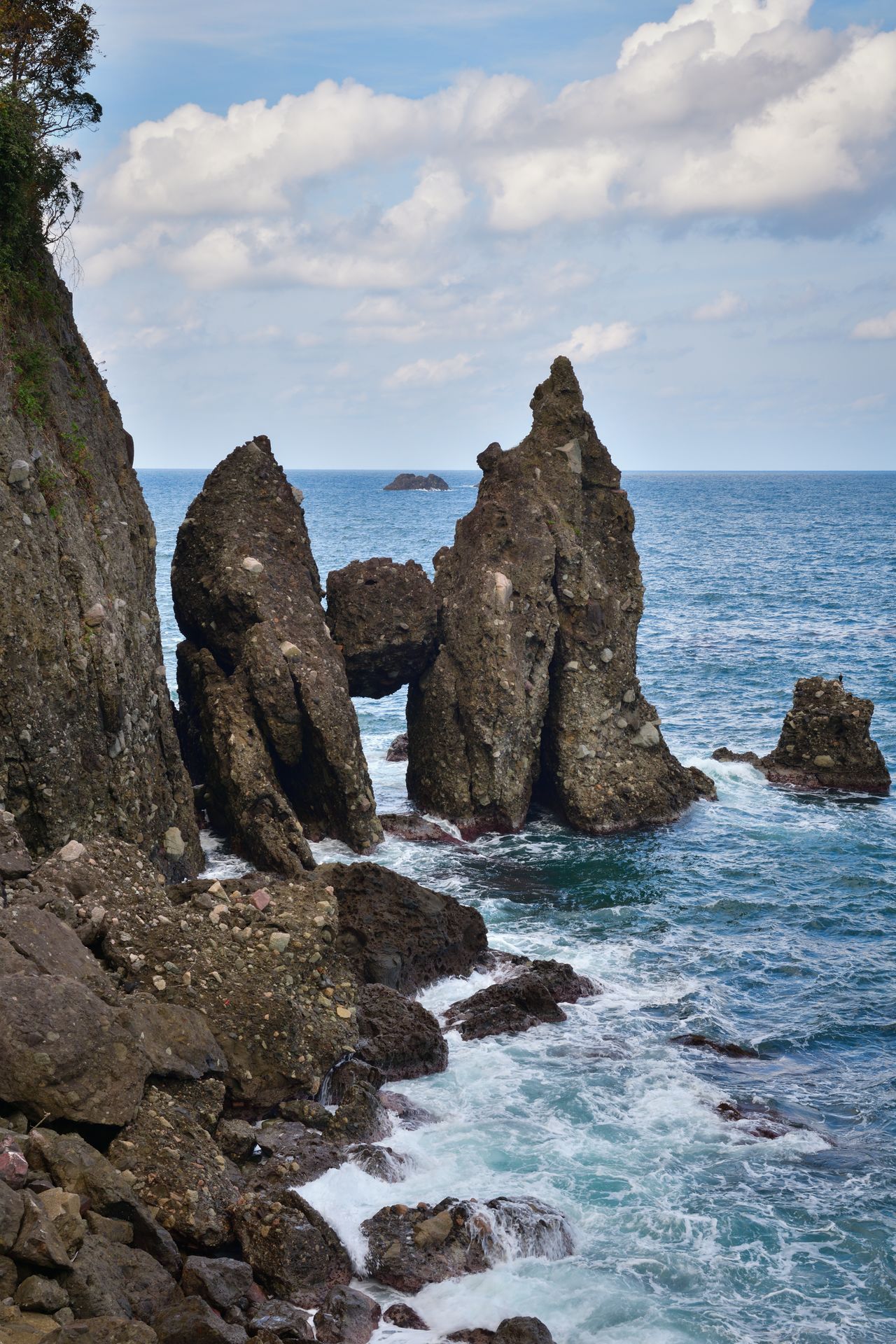 The Hasakari Rocks at Kirihama Beach were formed by the collapse of a cave roof that left the rock debris wedged between the cave walls. (Courtesy Hyōgo Tourism Bureau) 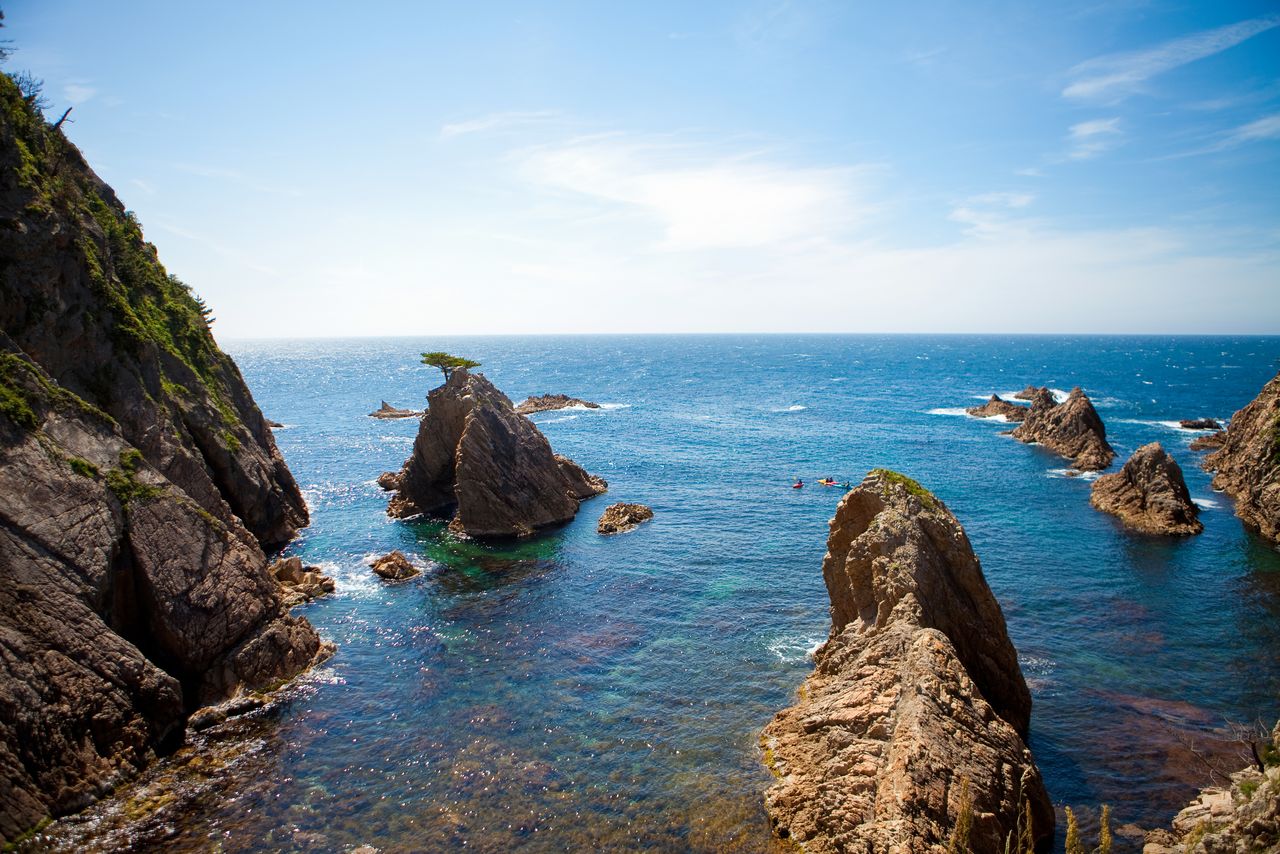 Sengan-Matsushima rock (center-left). The name comes from a story that a feudal lord promised to give one thousand kan (sengan) of silver to whoever succeeded in moving the pine—with rock attached—to his garden. (Courtesy Tottori Prefecture)

Visitors to the Tottori sand dunes, a stretch of sand 16 kilometers long and 2.4 kilometers wide, can enjoy a variety of activities ranging from camel rides to paragliding and riding Segways over the sand. The dunes’ wind-driven ripples, the beauty of the landscape at dusk, and at night, the isaribi fires for luring fish, present an ever-changing spectacle. In winter, the dunes are even dusted with snow. 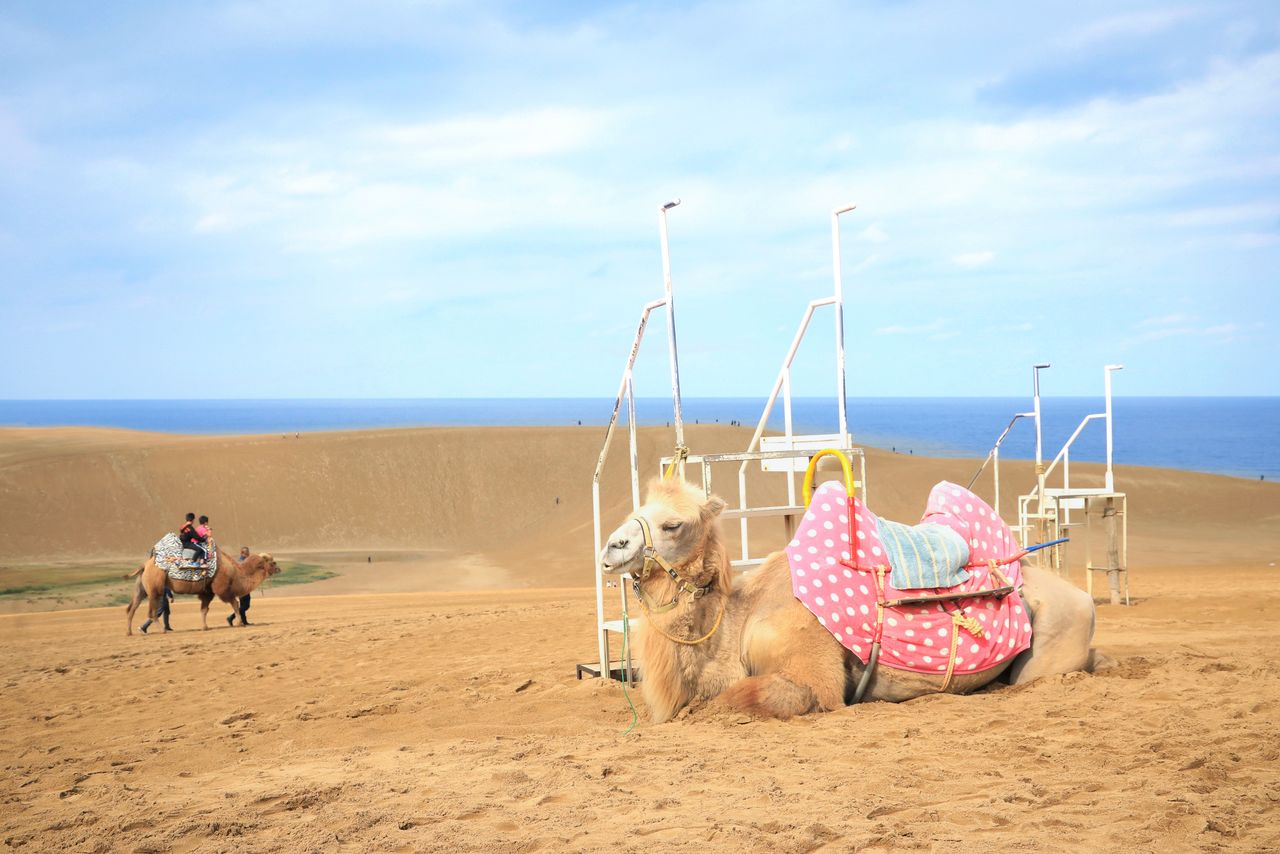 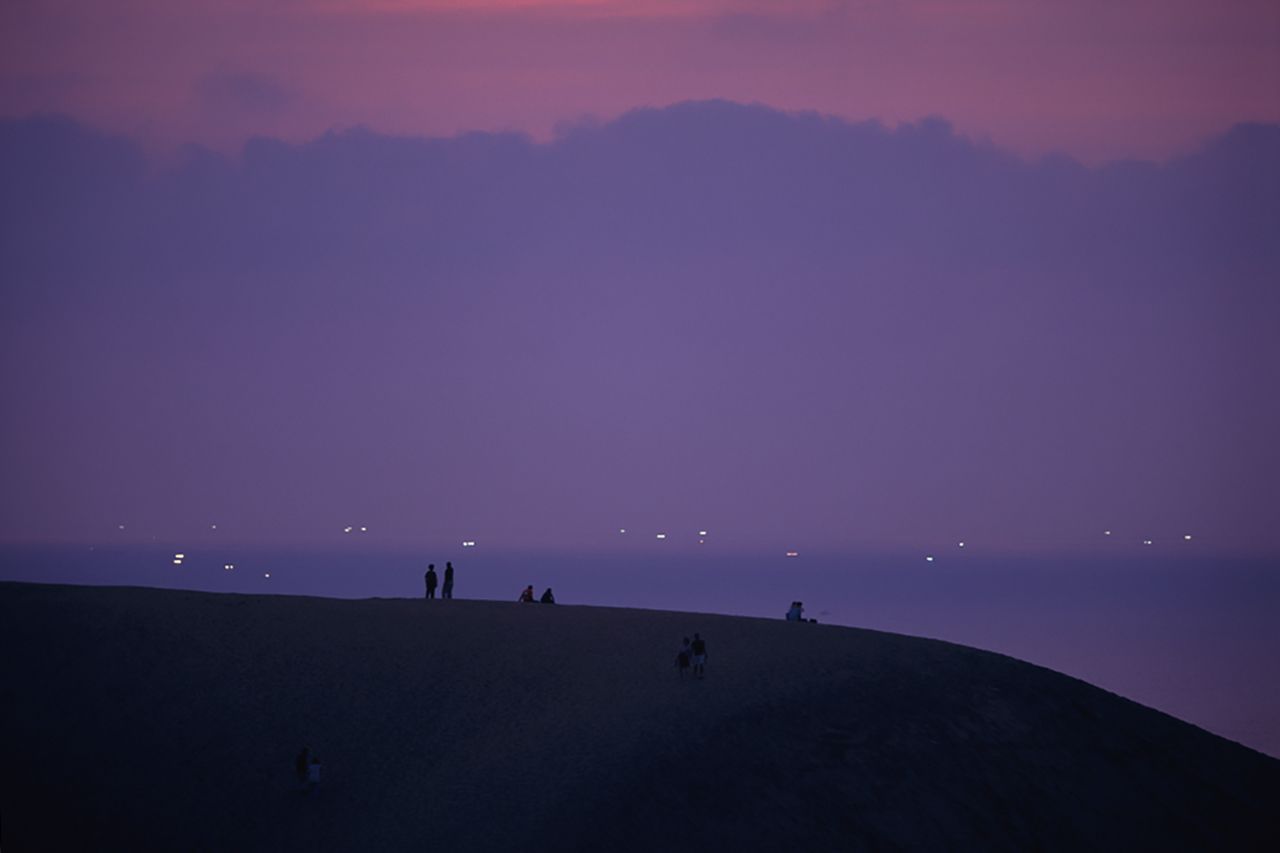 The dunes silhouetted at dusk, with isaribi in the distance. (Courtesy Tottori Prefecture) 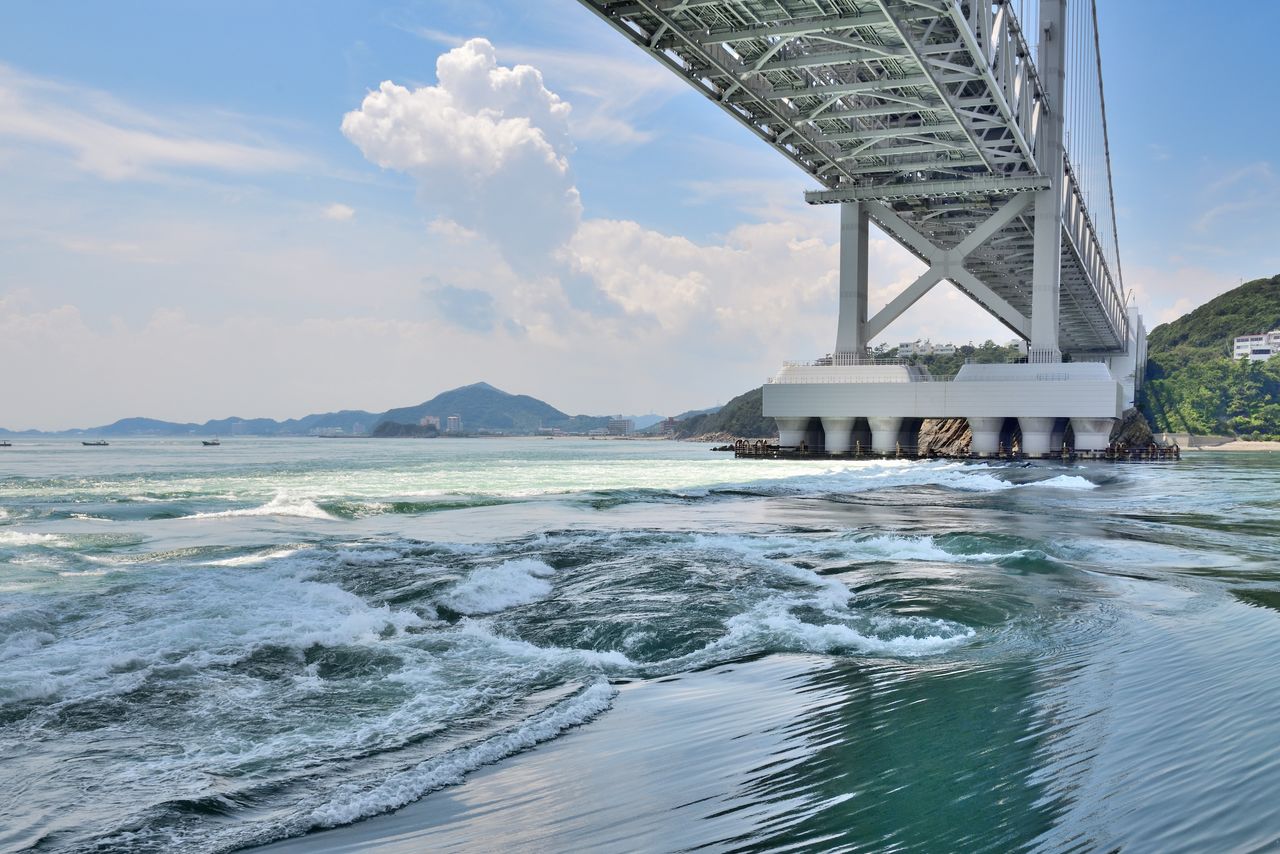 The Naruto tidal whirlpools, which can be up to 30 meters wide, occur in the Naruto Strait between Awaji Island in Hyōgo Prefecture and Naruto in Tokushima Prefecture. (Courtesy Hyōgo Tourism Bureau)

Misaki-chō, at the southern end of Osaka Bay, is the site of Osaka’s last natural sand beach, where visitors can enjoy swimming, clam-digging, fishing, or canoeing. Tomogashima is a group of islands in the Kitan Strait off Wakayama Prefecture where the ruins of nineteenth century gun batteries lie in the islands’ unspoiled forests. A sightseeing tour boat reminiscent of the Miyazaki Hayao animated film Castle in the Sky has been very popular in recent years. 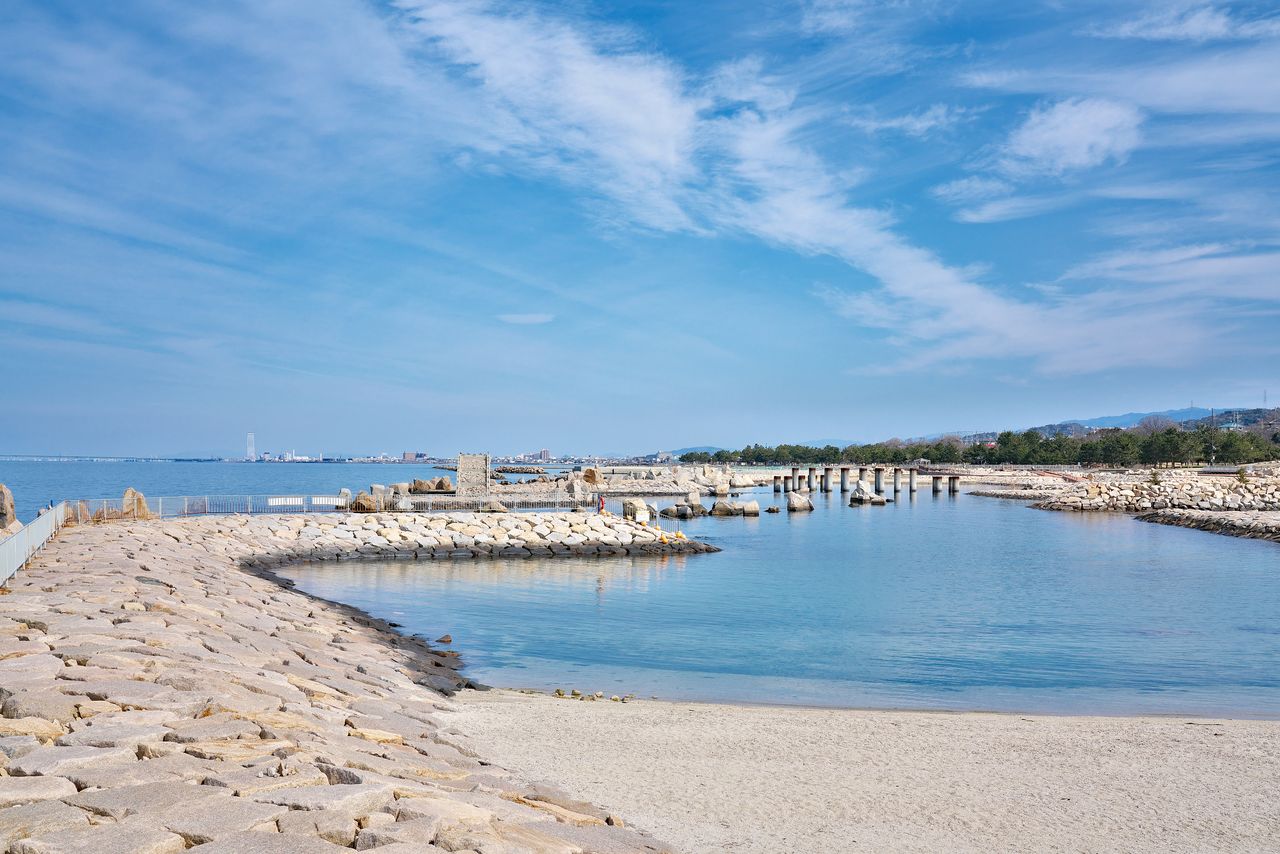 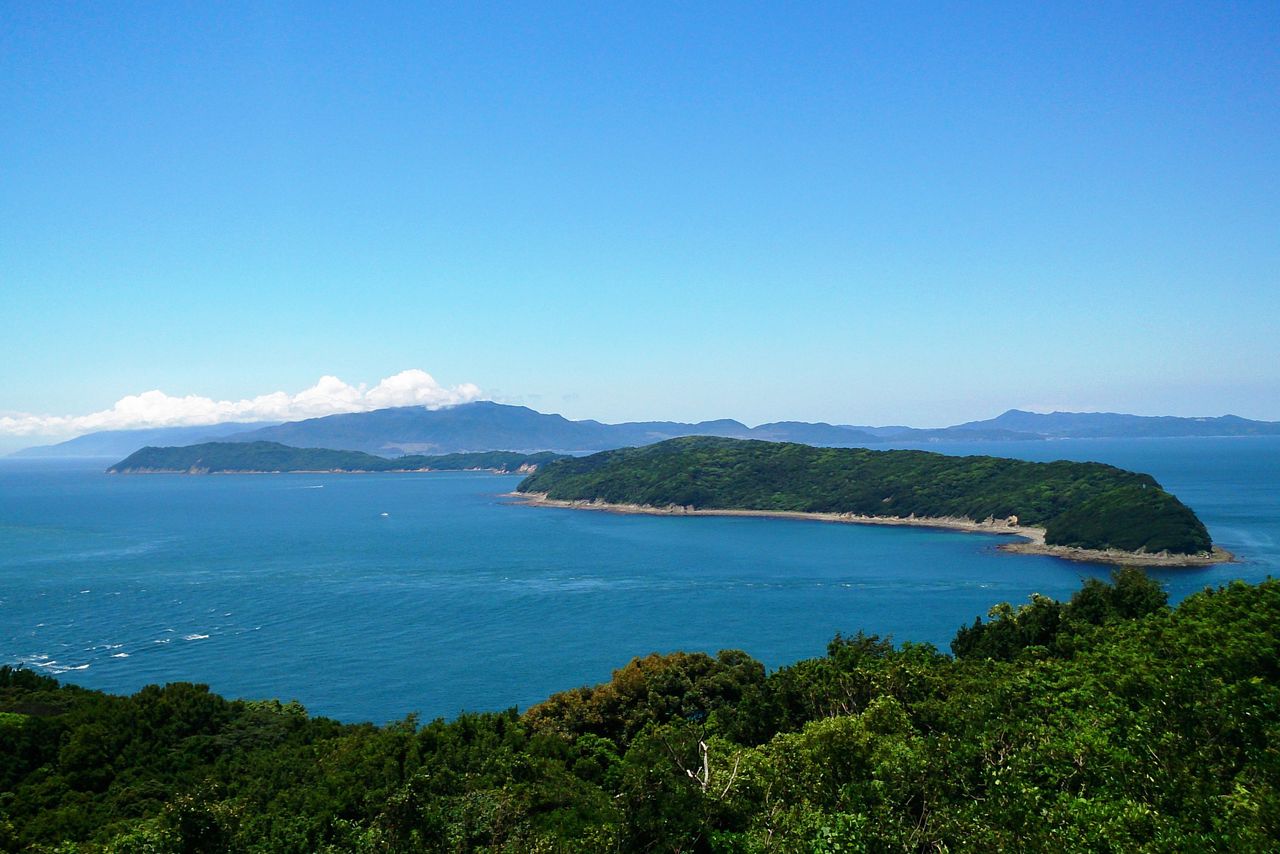 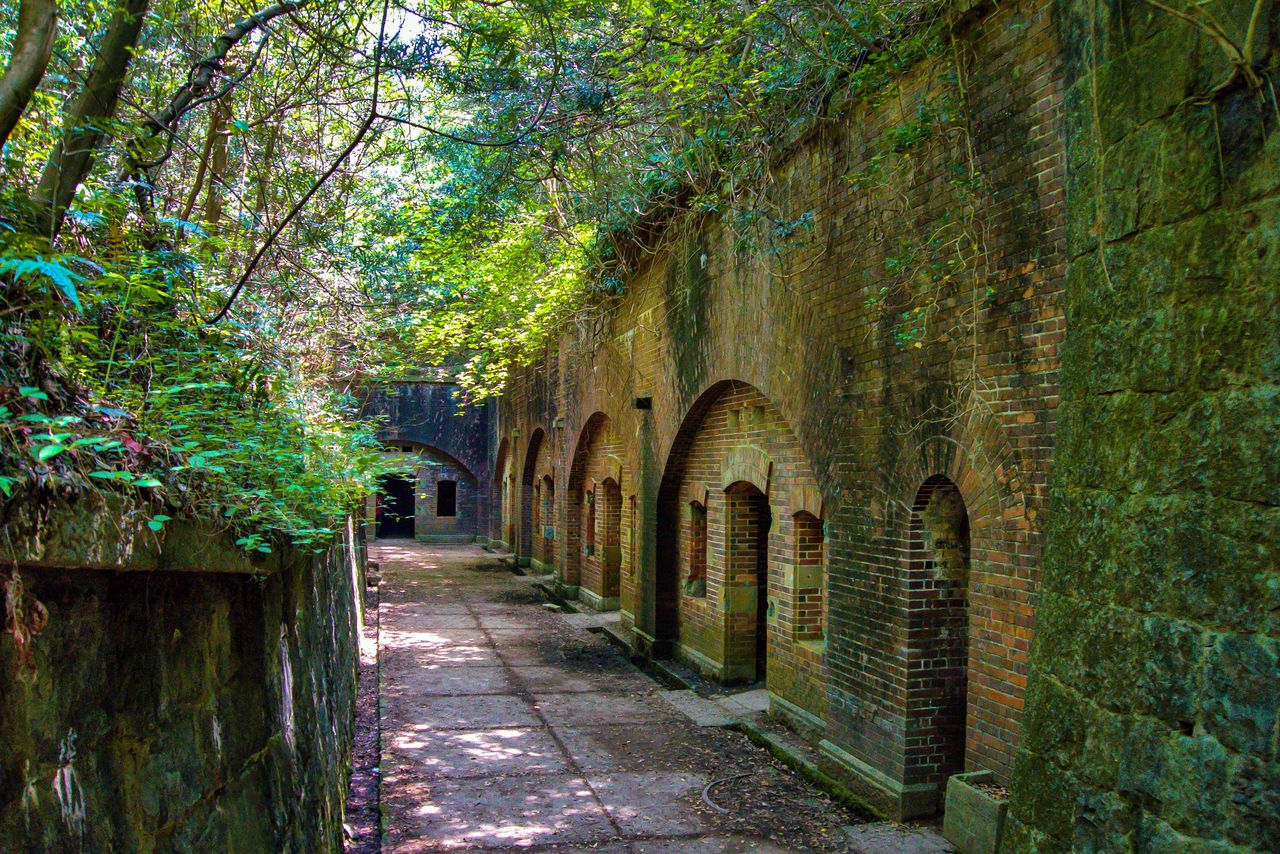 Portions of the park in Hyōgo Prefecture include the Mount Rokkō area and the Nishi-Harima seashore, but the best sights are on Awaji Island. They include Narugashima, a sandbar on the Akashi Strait also known as Awaji-hashidate, the Naruto tidal whirlpools, and many other sights typical of the Seto Inland Sea region. 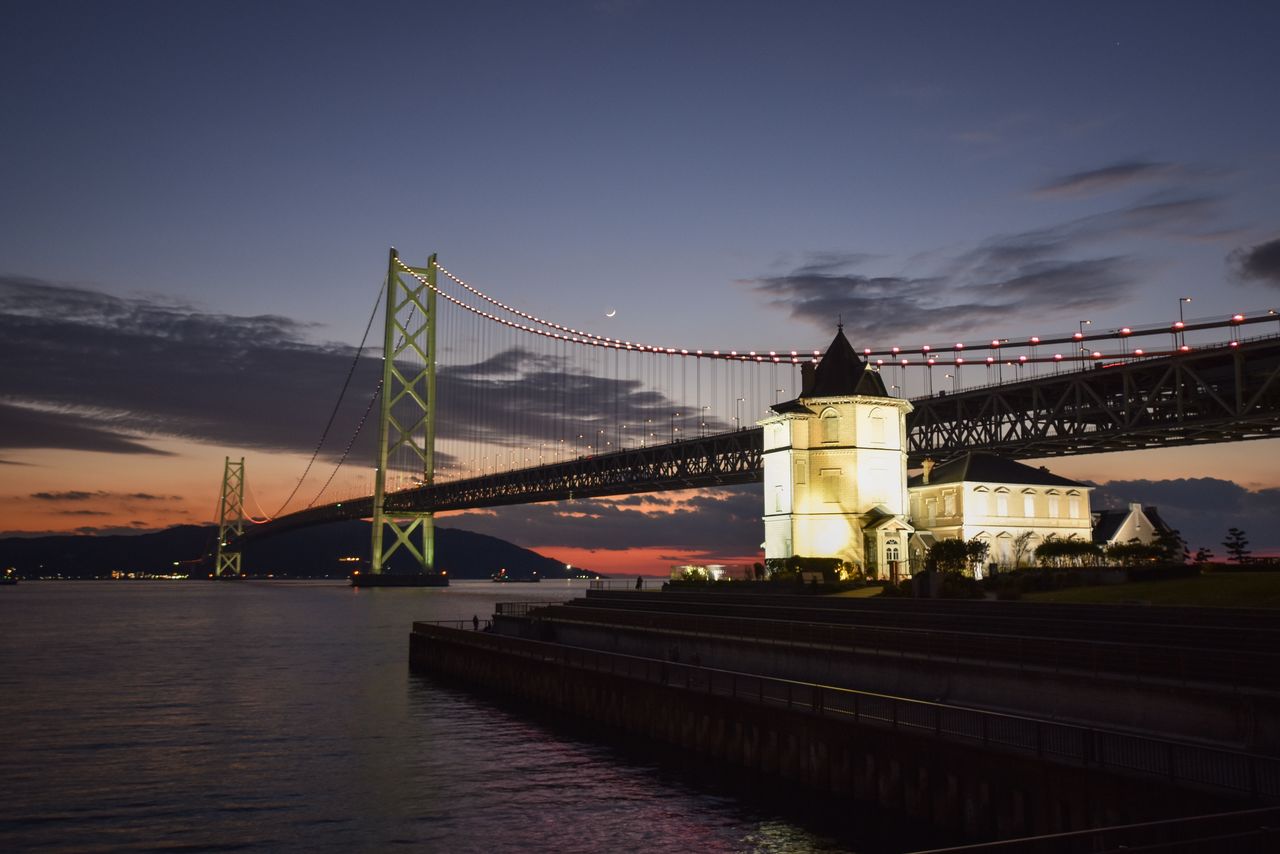 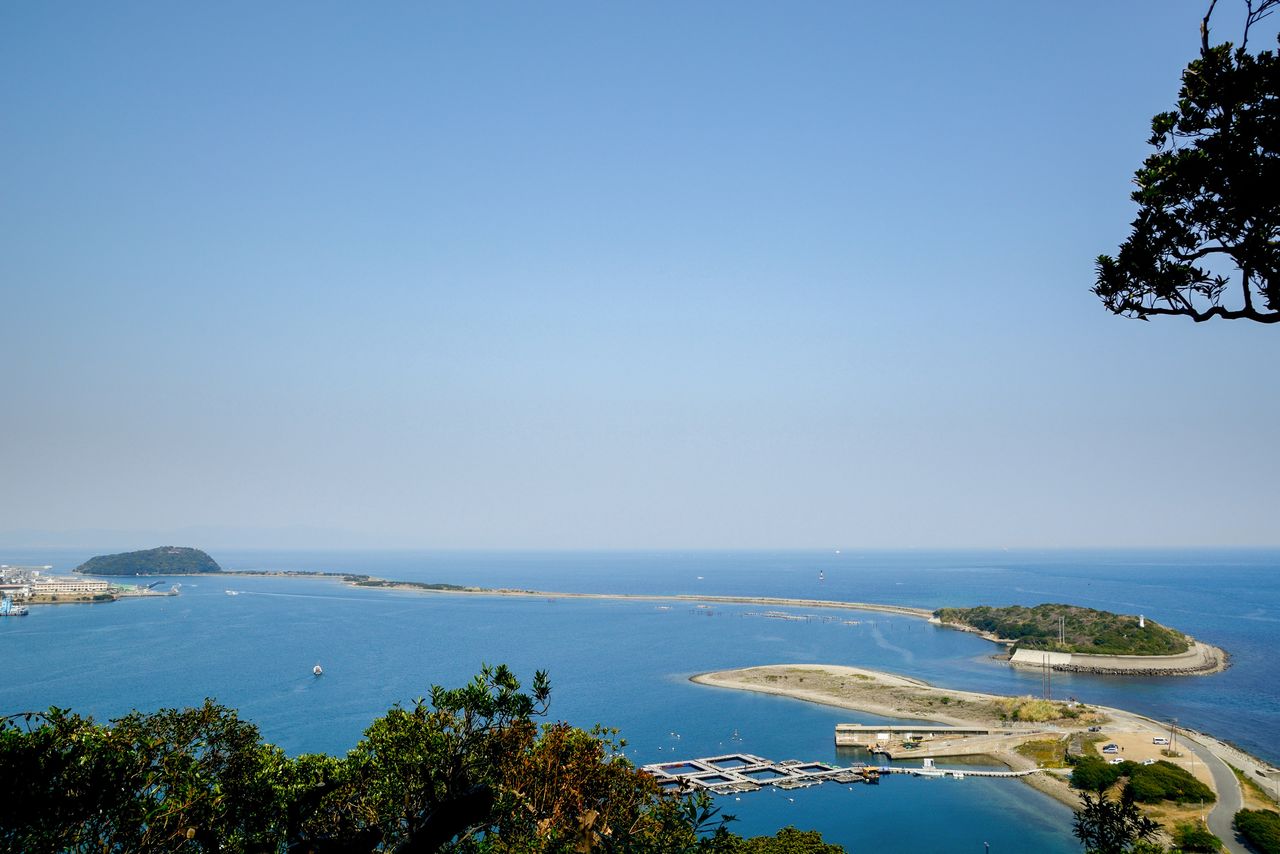 Narugashima, a 3-kilometer-long sandbar on the south-eastern side of Awaji Island. (© Pixta)