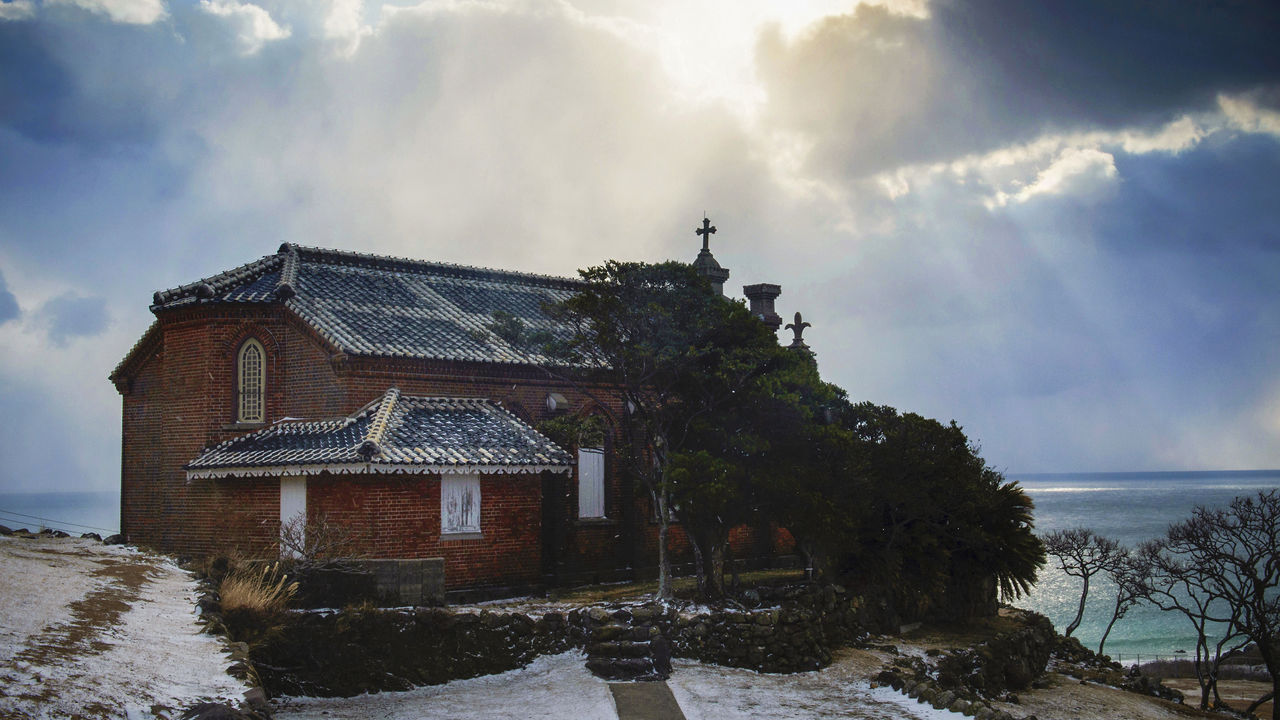 Travel Culture History Jun 6, 2018
On May 4, 2018, A UNESCO advisory body recommended that sites related to the history of the hidden Christians of Nagasaki and the Amakusa region be inscribed on the World Cultural Heritage list. Photographer Kuroiwa Masakazu explores Nagasaki’s Gotō Islands and the role they played in the history of Japan’s hidden Christians.

On March 17, 1865, the French Catholic priest Bernard Thaddée Petitjean (1829–84) was praying before the altar of the newly built Ōura Church in Nagasaki when he was approached by a group of 15 people from the nearby village of Urakami. Led by a woman named Sugimoto Yuri, the group professed their Christian faith to the surprised priest. They were “hidden” Christians who had secretly kept their faith alive through 250 years of suppression.

Christianity was first introduced into Japan in 1549 by the Jesuit missionary Francis Xavier (1506–52). The religion spread rapidly in the Kyūshū region, where even some daimyō lords converted, such as Ōmura Sumitada, who opened the port of Nagasaki to foreign trade. In 1587, and again in 1596, however, Toyotomi Hideyoshi issued edicts expelling the Christian missionaries from Japan. The Tokugawa shogunate followed suit with successive bans in 1612 and 1613, culminating in a complete ban on Christianity throughout Japan in 1614. By that time most of the Christian missionaries had been expelled from the country, heralding a rigid isolationist policy that took firm hold by the middle of the seventeenth century and remained intact for some 250 years.

Given this history, Bernard Thaddée Petitjean considered it a miracle that the Christian faith had been secretly kept alive in Japan throughout the centuries of isolation. His “discovery” of the so-called hidden Christians thrilled the Catholic world.

The Christian Cave at Satonoura on Wakamatsu, one of the Gotō Islands, provided a brief refuge for hidden Christians trying to evade persecution.

The Port of Nagasaki

Now, more than 150 years since the hidden Christians revealed themselves, their long history is about to be commemorated in 2018 with the inclusion of the “Churches and Christian Sites in Nagasaki” in the UNESCO list of World Heritage sites. Many of the sites are to be found in Nagasaki Prefecture’s Gotō Islands, which can be accessed by boat from a number of different ports. It seems most appropriate, however, for a tour concerning the hidden Christians to start from the port of Nagasaki.

The formal name of the Ōura Church is the Basilica of the Twenty-Six Holy Martyrs of Japan. It is a memorial to the 26 missionaries and Japanese converts who were crucified on Hideyoshi’s order in 1597. The 26 were long revered in Europe as the first Christian martyrs in Japan, and in 1862 they were canonized by the Catholic Church. The Ōura Church, built in 1864, faces the hill of Nishizaka in Nagasaki were the crucifixion took place.

The church is crowned by an elegant octagonal steeple and lit inside by solemn, mystical light filtered through delicate stained-glass windows. When the hidden Christians met Petitjean at the newly built church, they were traveling incognito under the ruse that they were merely curious to see the “French temple.” What might their thoughts have been as they gazed upon those stained-glass windows? 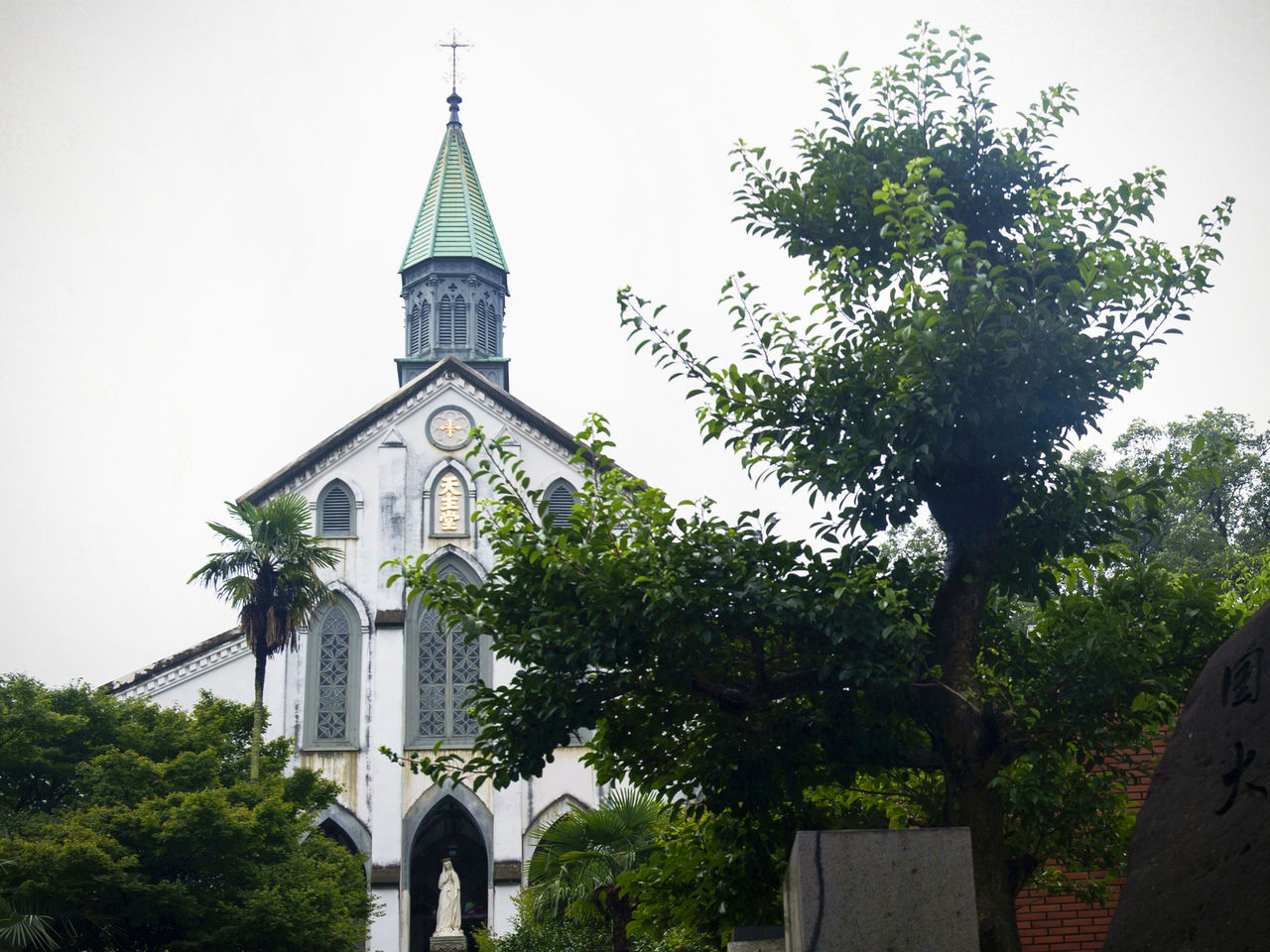 To get to the Gotō Islands from the port of Nagasaki, you can take a ferry or a hydrofoil. If you are not in a hurry, I recommend the ferry, where you can ride on the upper deck. With a blow of its whistle, the morning ferry departs for the port on the island of Fukue at 8:05 am.

Many hidden Christians made their way to the Gotō Islands during the Edo period (1603–1868). The group that was miraculously “discovered” in 1865 emboldened many other hidden Christians to step forward and confess their faith, but it was not until 1873, well into the Meiji era (1868–1912), that the prohibition on Christianity was finally lifted. The Urakami villagers who approached the French priest at Ōura Church were later punished in what came to be known as the Urakami Yonban Kuzure. The whole village was rounded up and its members scattered into exile in other parts of Japan.

The ferry arrives at the port of Fukue, the largest of the Gotō Islands, as scheduled at 11:15. The island has a bus service operated by the Gotō Jidōsha Company, but the buses are few and far between. I recommend renting a car or other kind of vehicle if you want to tour the island at your own pace. I set off on my tour of the island’s churches with a rental bike. My first stop is the Dōzaki Church north of Fukue Port in the Okuura district. This is where the first church was built after the prohibition on Christianity was lifted. The current structure is a lovely red brick building of gothic design. 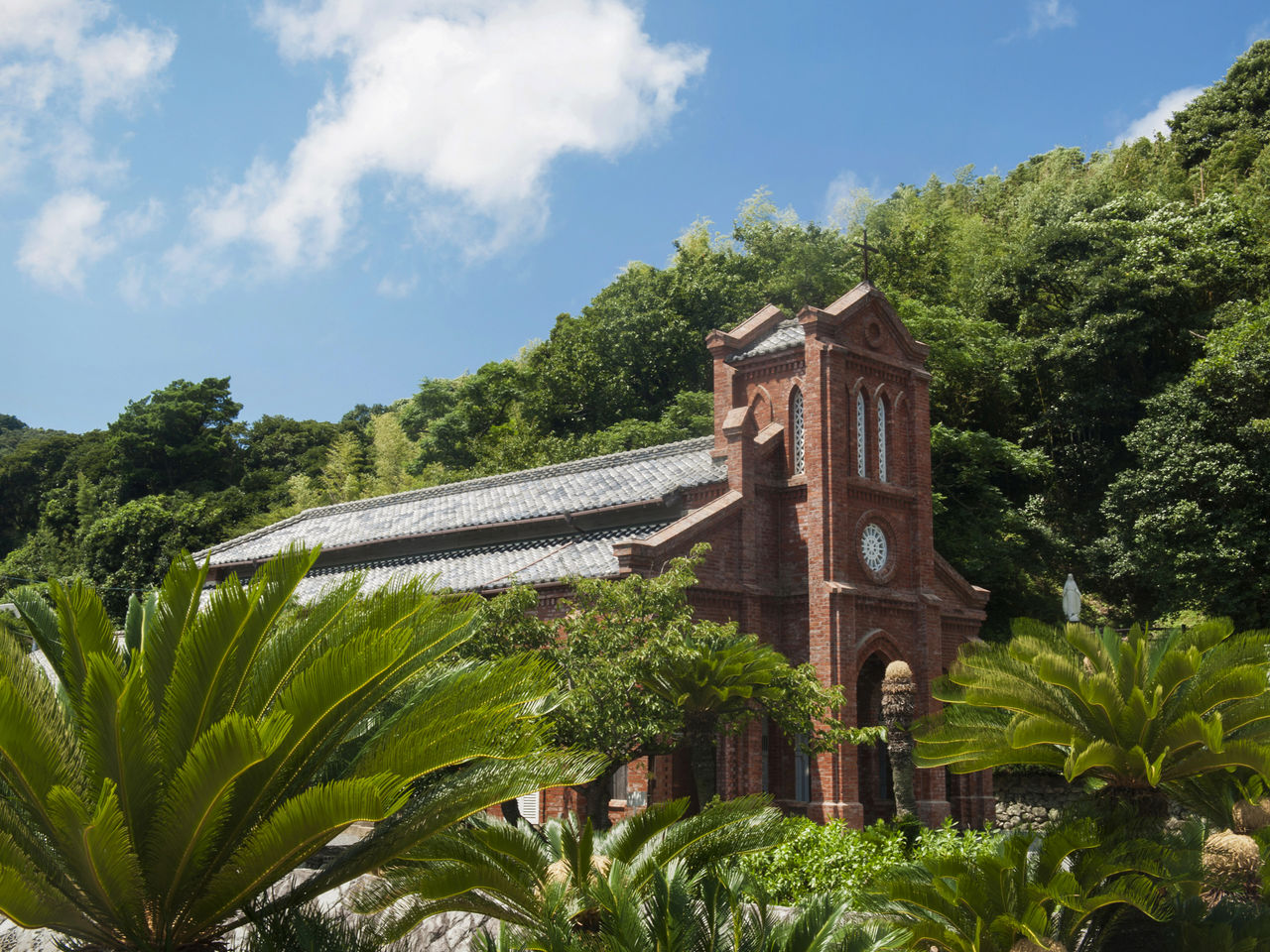 The original Dōzaki Church was built in 1880. The building that can be seen today was constructed in 1908.

My next objective is the Imochiura Church in the Tamanoura district at the western end of the island. This is where the first Lourdes grotto was built in Japan. Lourdes is the name of a town in southwestern France where, in 1858, the Virgin Mary is said to have appeared before a young girl. The spring pouring from the grotto where the Virgin Mary appeared has long been believed to have medicinal properties. The first replica of the Lourdes grotto was built in the Vatican in 1891, and since then similar shrines have been built around the world. The Imochiura Church grotto with its statue of the Virgin Mary was built in 1899. 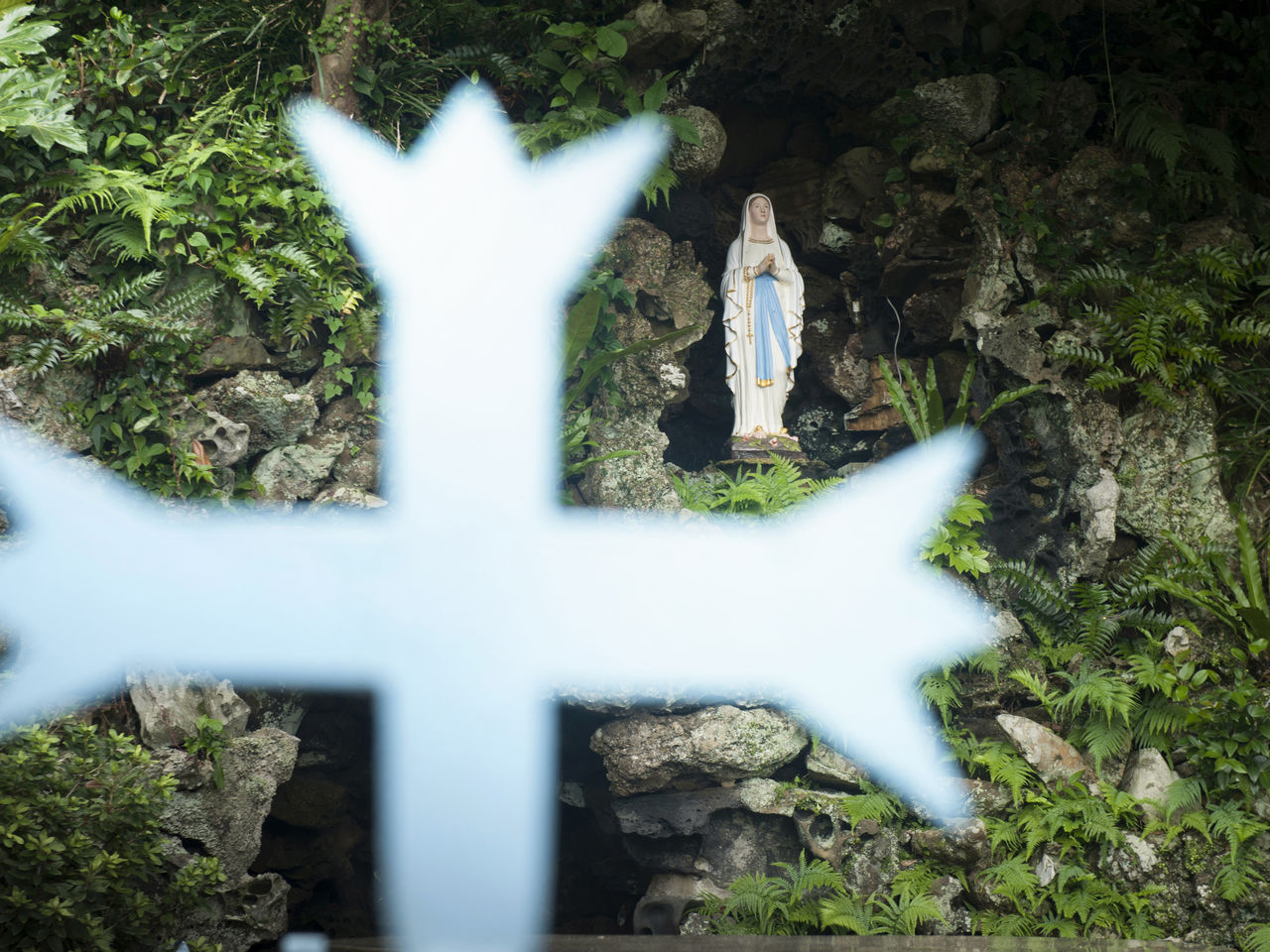 The Lourdes grotto of the Imochiura Church.

As evening approaches, I make my way to the northwestern edge of the Miiraku Peninsula to view the tombstones of the Fuchinomoto cemetery as the sun sets in the East China Sea. The sight is an awe-inspiring moment reflecting the deep Christian faith of the people buried there. 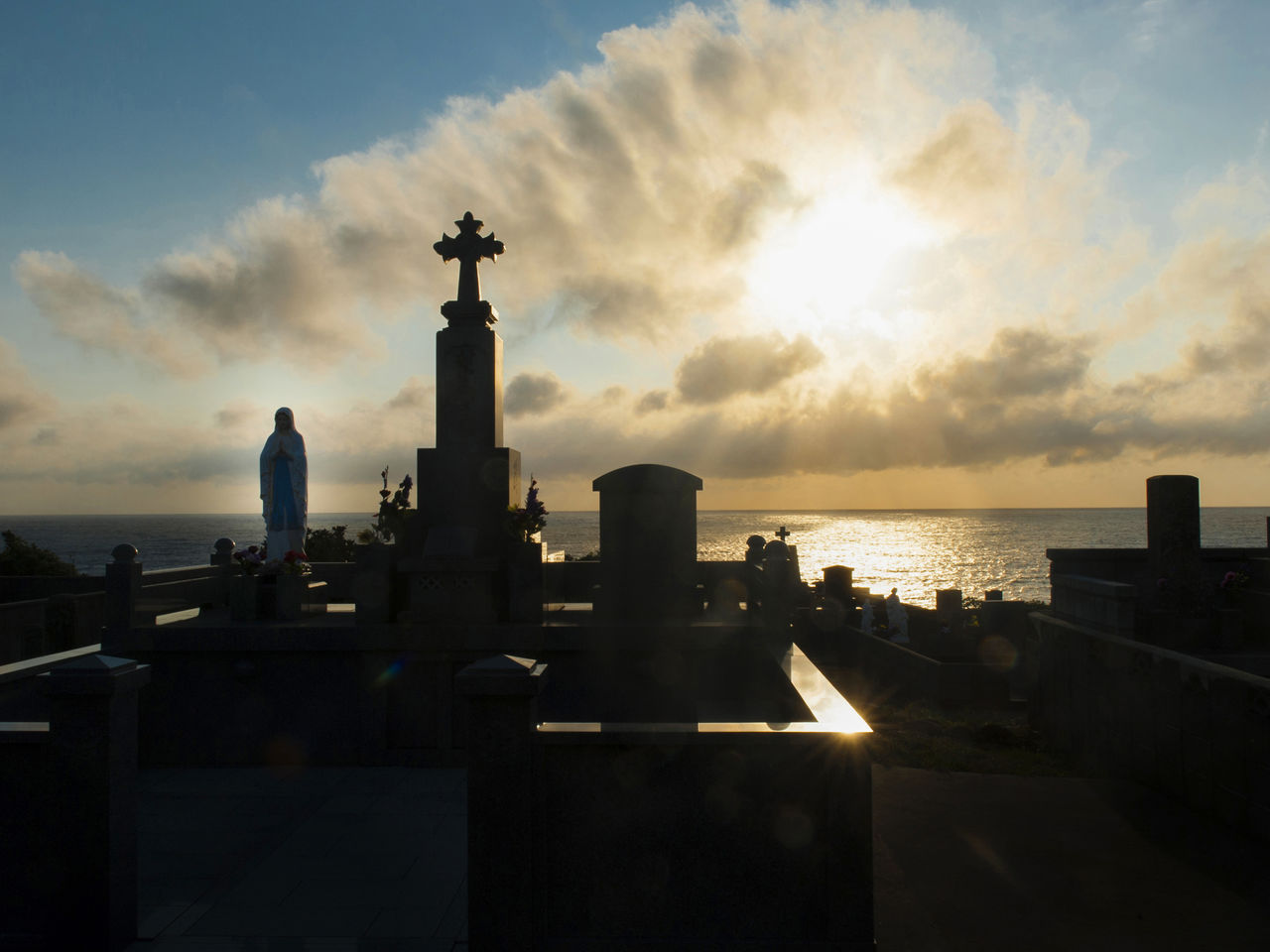 The setting sun silhouettes the tombstones of the Fuchinomoto cemetery.

The World Heritage Sites of the northern Gotō Islands

I return to take the ferry from Fukue Port going north to Hisaka and Naru Islands, finally arriving at Nakadōri, the second largest of the Gotō Islands. From there I pass over to the island of Kashiragashima, the starting point for the hamlets comprising the World Heritage sites included in the “Churches and Christian Sites in Nagasaki.”

The ban on Christianity was still enforced in the early years of the Meiji period. In one incident in 1868 on Hisaka Island, more than 200 people were imprisoned in a small room of roughly 20 square meters. Of their number, 42 did not survive the ordeal, which went on for some eight months. There is now a memorial chapel on the spot where they died, the Rōya no Sako Martyr Memorial Church. On the eastern part of the island is the Former Gorin Church, built in 1881 and later moved to its present location. It is the oldest of the churches in the Gotō Islands. Though the building is no longer used, the daylight pouring through the windows into gothic interior of the church gives it an ethereal quality. 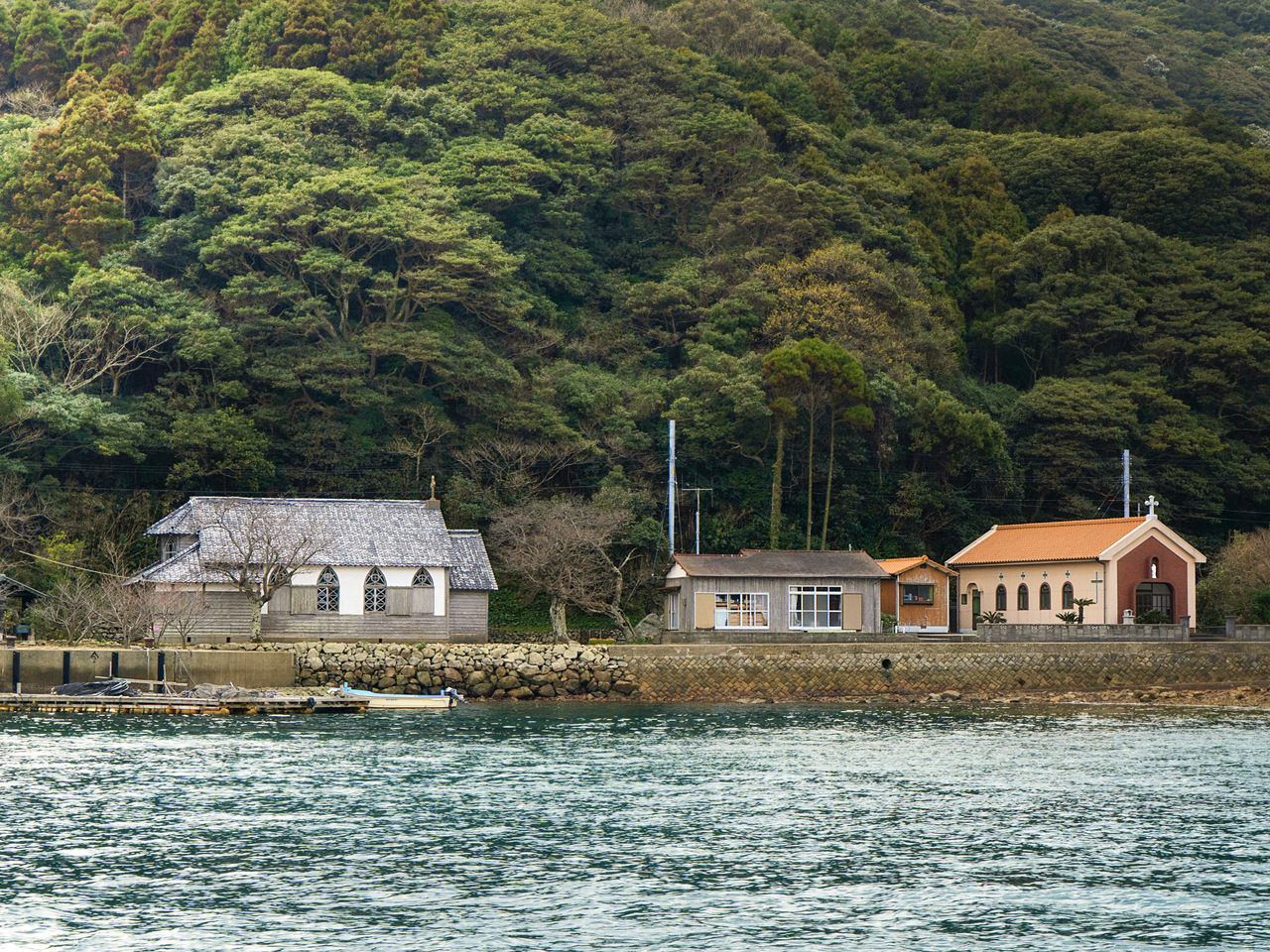 The Former Gorin Church (left), designated a national Important Cultural Property, is tucked between the sea and the mountains. 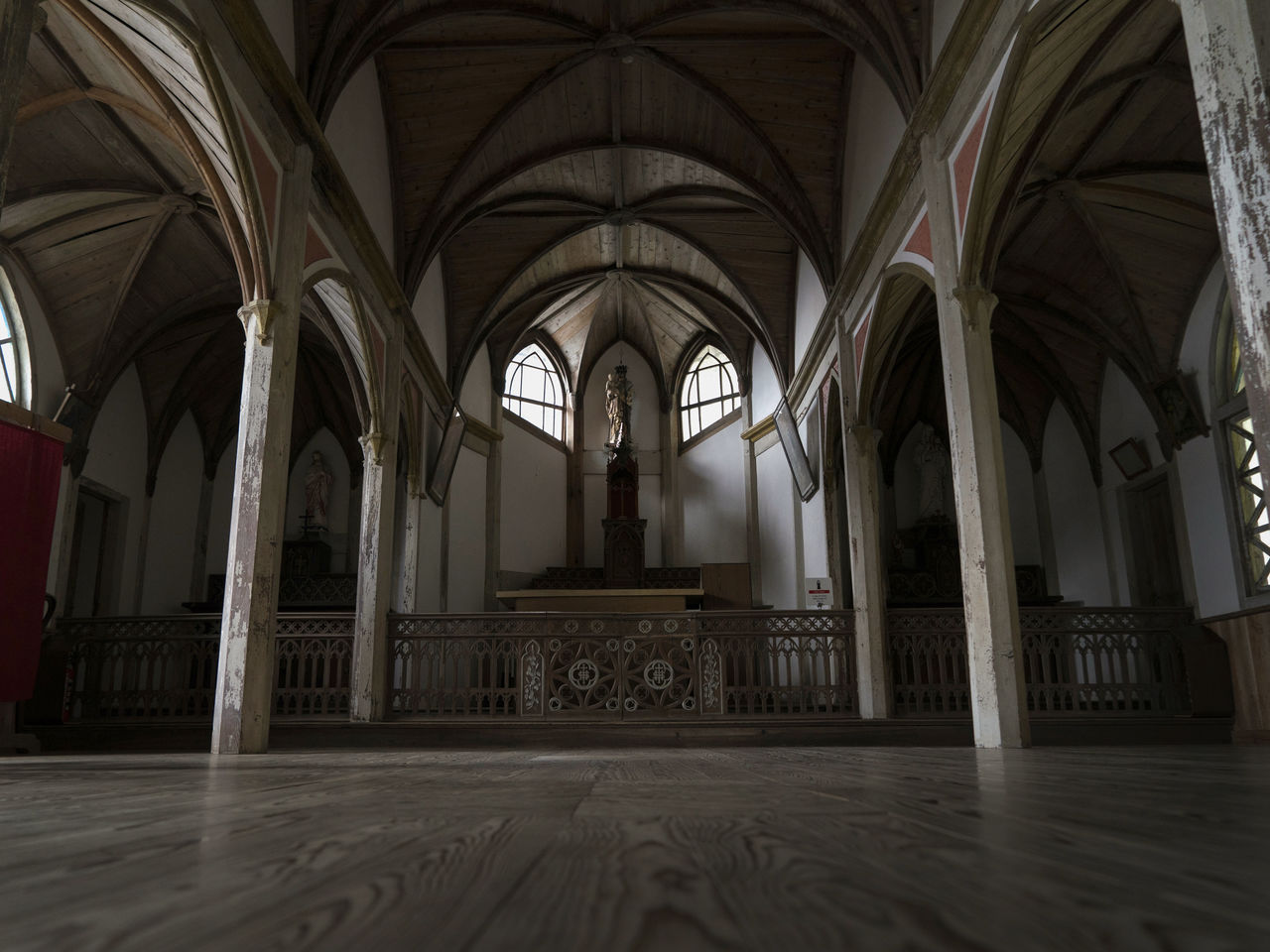 The beautiful rib-vault interior of the Former Gorin Church.

The island of Naru is well known to have been home to numerous hidden Christians who are now referred to as kakure Christians. Unlike other hidden Christians who returned to the Catholic Church after the ban on Christianity was lifted, the kakure Christians continued to practice a unique faith that had, in the absence of the missionaries, morphed over the centuries of suppression into a unique system of beliefs. The hidden Christians of the village of Egami were the first to be baptized, a service provided by the French priest Auguste Bourelle (1847–85), after the ban on Christianity was lifted in the early Meiji period. The villagers built the Egami Church themselves in 1917–18. The fish catch was unusually abundant that year, and the villagers are said to have given thanks for God’s blessing. The little church, a prime example of wooden church buildings in Japan, was designated a national Important Cultural Property in 2008. 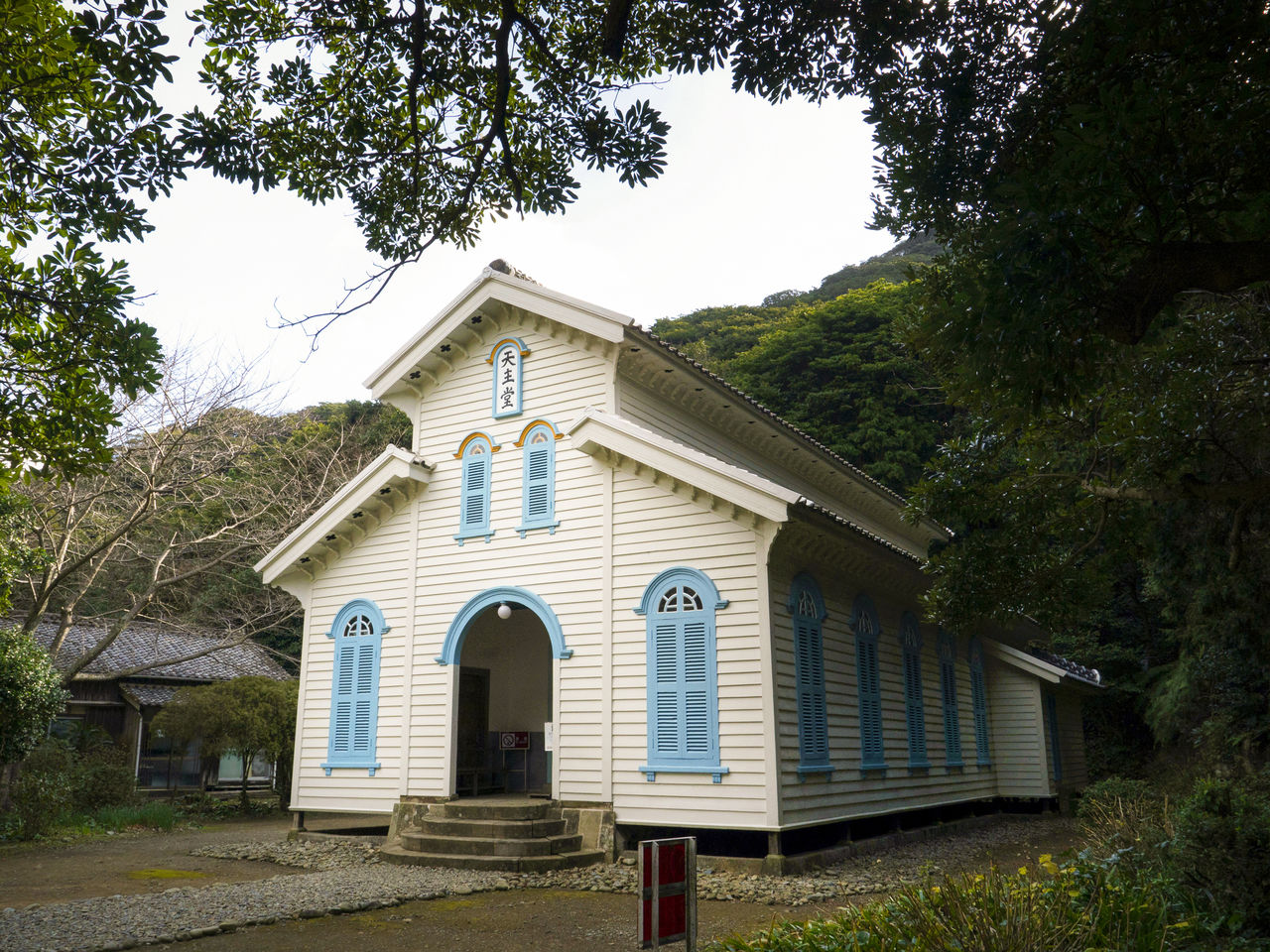 The quaint cream-yellow Egami Church is nestled in a deep forest.

The island of Kashiragashima to the east of Nakadōri can be reached by crossing the Kashiragashima Ōhashi bridge. Around the time of the Meiji Restoration, hidden Christians moved from the Tainoura district of Nakadōri to the smaller island, where they formed a village and built the Kashiragashima Church. The sturdy structure, the only stone church in western Japan, is made from stones quarried on the island. 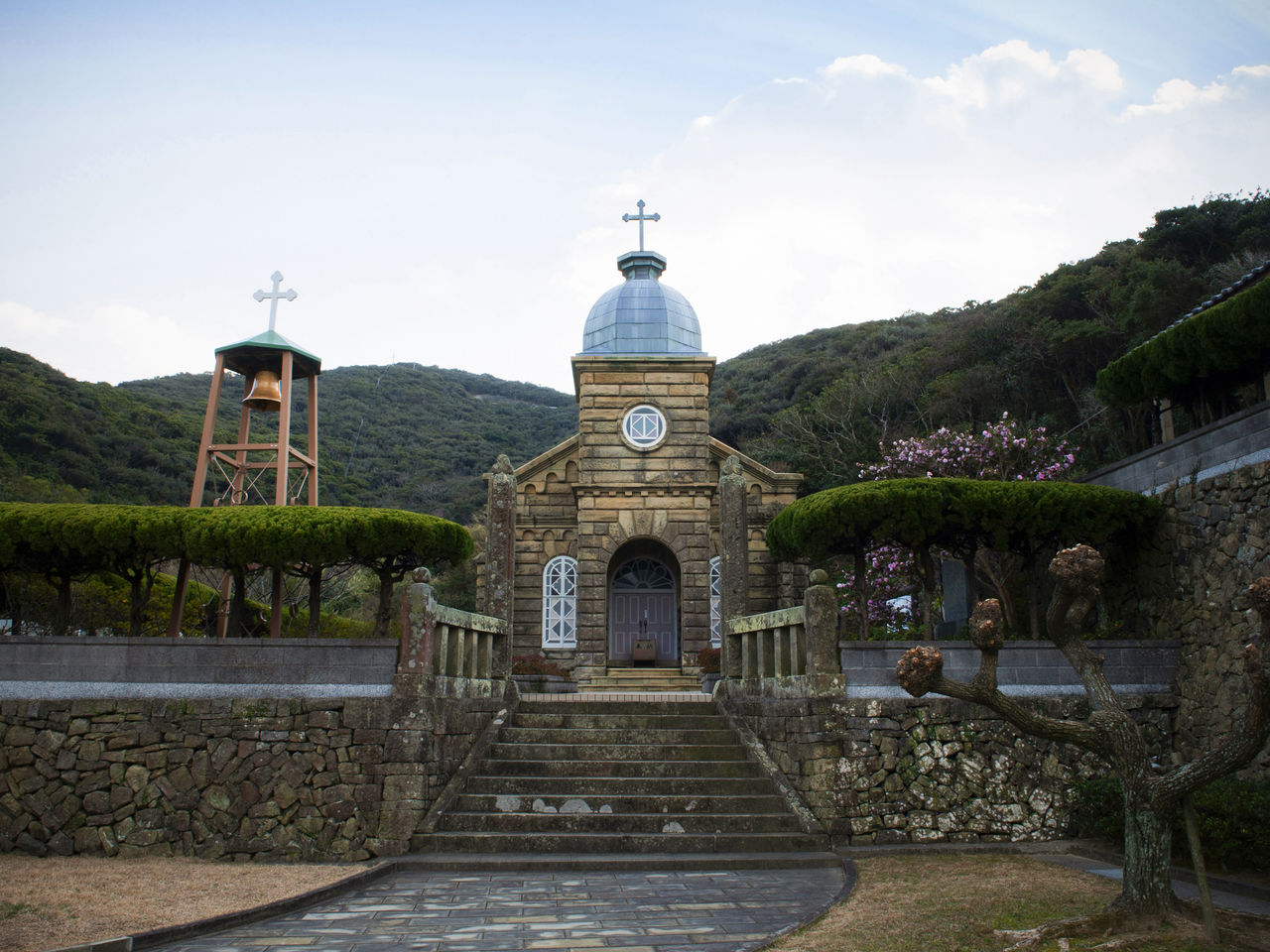 The stone-built Kashiragashima Church has a stately air. 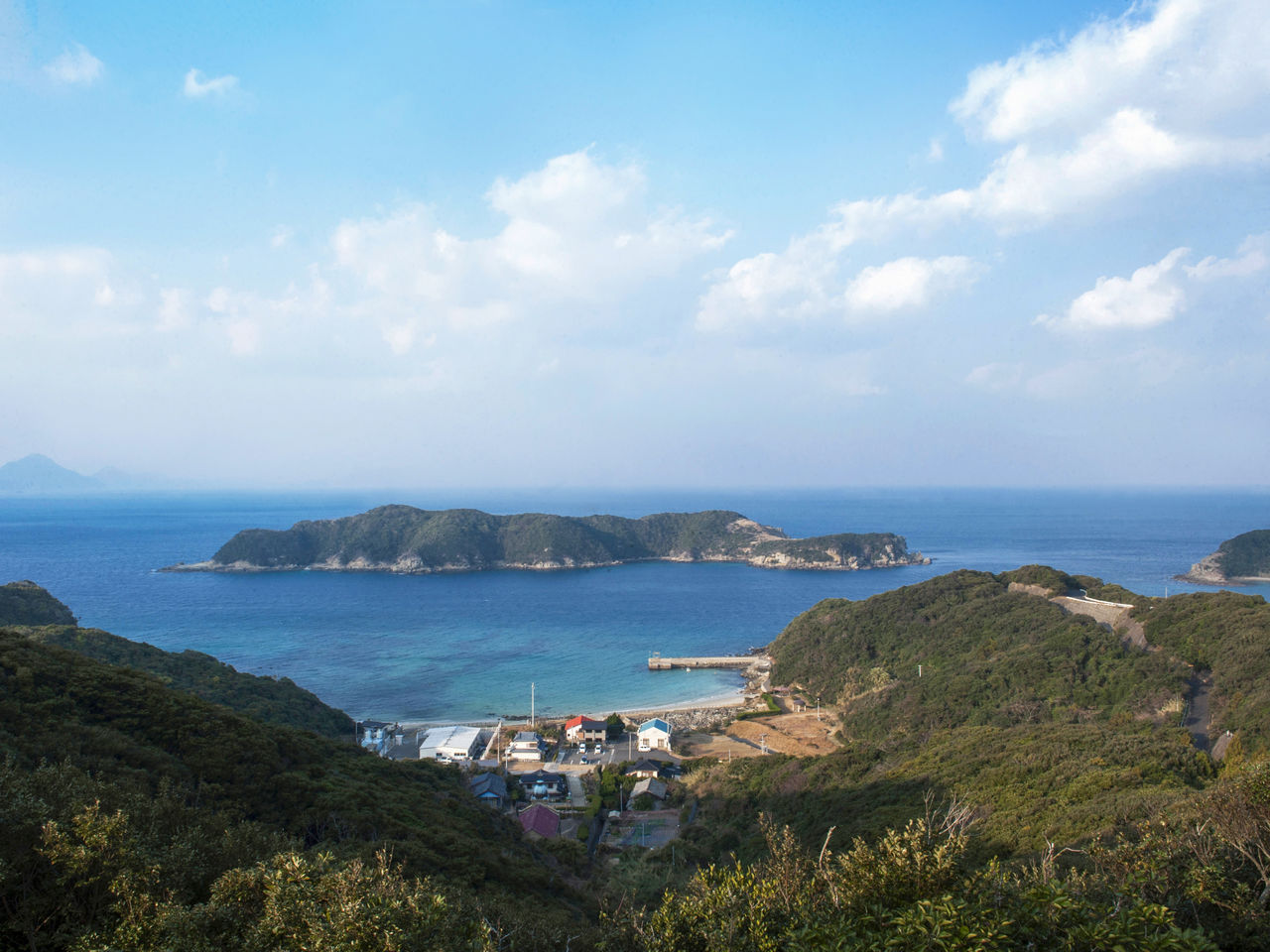 The little village on Kashiragashima where hidden Christians sought to escape persecution. 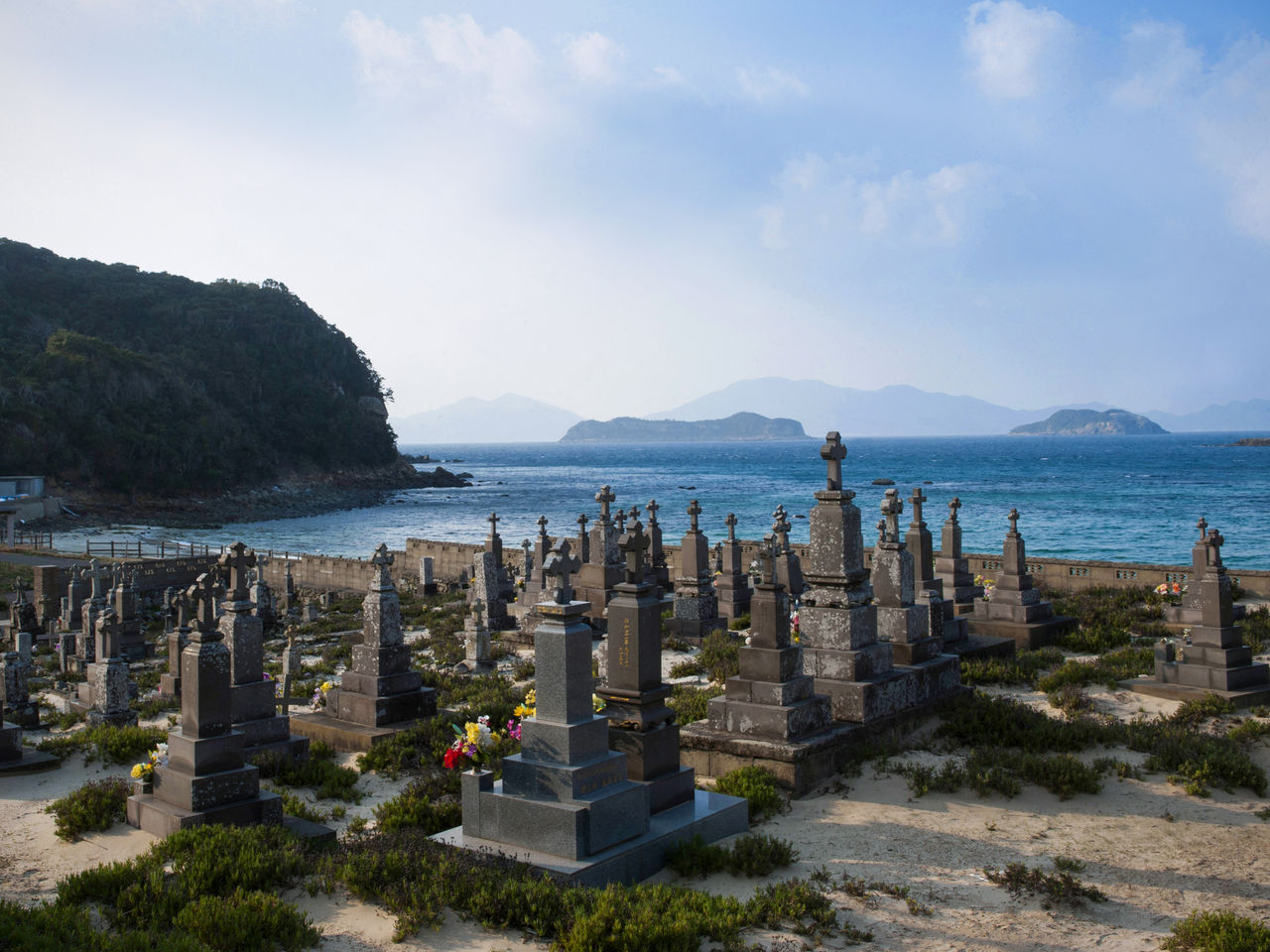 Christian tombs on Kashiragashima gaze out at the ocean.

Memories of the Hidden on an Abandoned Island

The last stop on my tour is the island of Nozaki at the northeastern end of the Gotō Islands. The island is uninhabited today, but was once home to a population of around 600 people living in three villages.

The Former Nokubi Church stands on what was once the village of Nokubi, a tiny farming hamlet of only 17 households. The church was built in 1908 by the villagers, who are said to have fished for kibinago, a type of small herring, and restricted themselves to only two meals a day to save the money they needed to build the church. 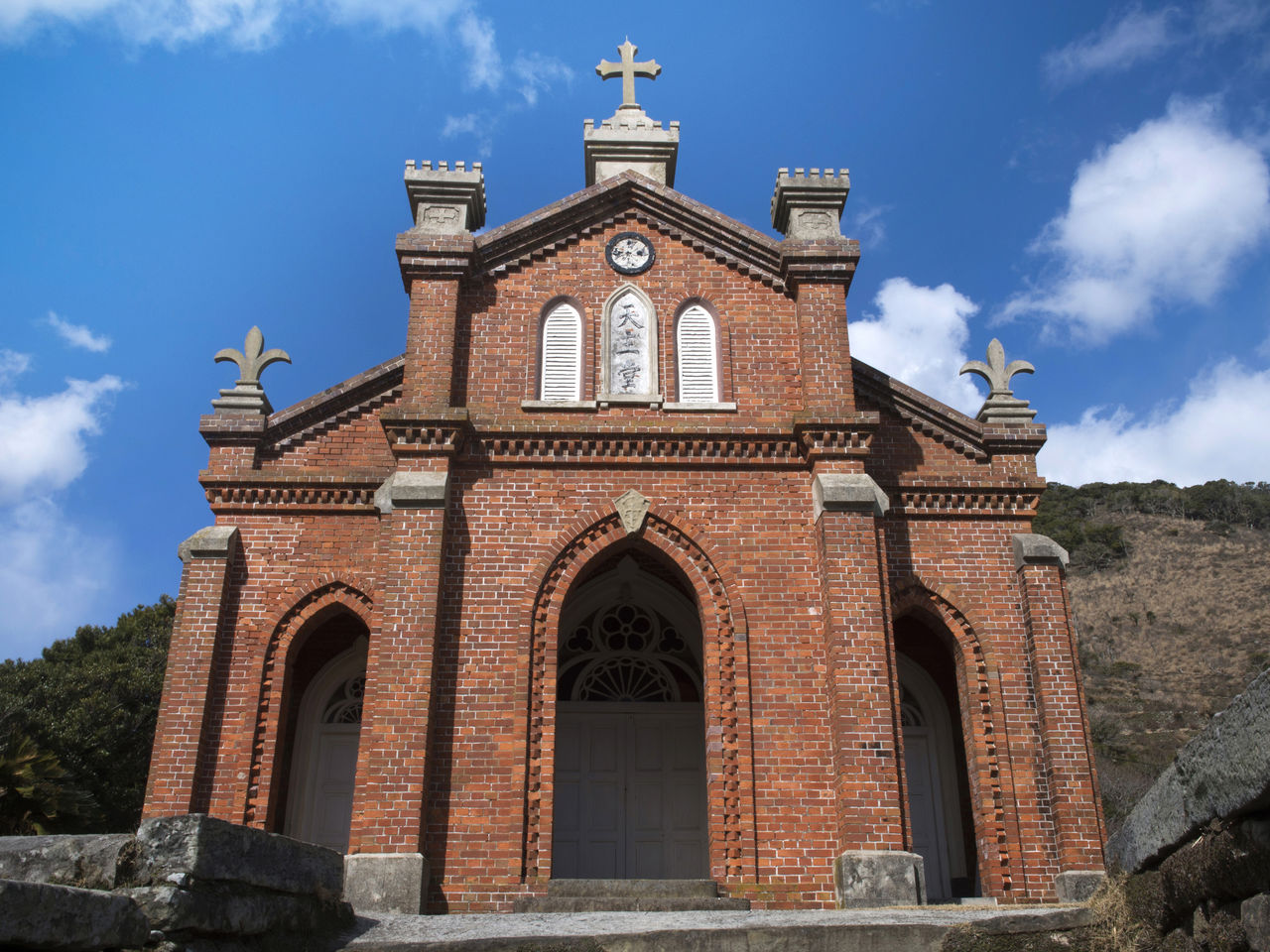 The Former Nokubi Church stands tall and proud in an empty land.

Only pieces of crumbling stone wall remain of the Setowaki Church of Funamori, another abandoned village on the southern end of the island. The site is on an incredibly steep slope and speaks volumes of the hard life of the hidden Christians who escaped there. I am struck by how the beauty of the many churches of the Gotō Islands are invariably set in cruel, inhospitable terrain. Your tour of the Gotō Islands is certain to leave a lasting impression as you learn of the history and struggles of the hidden Christians. 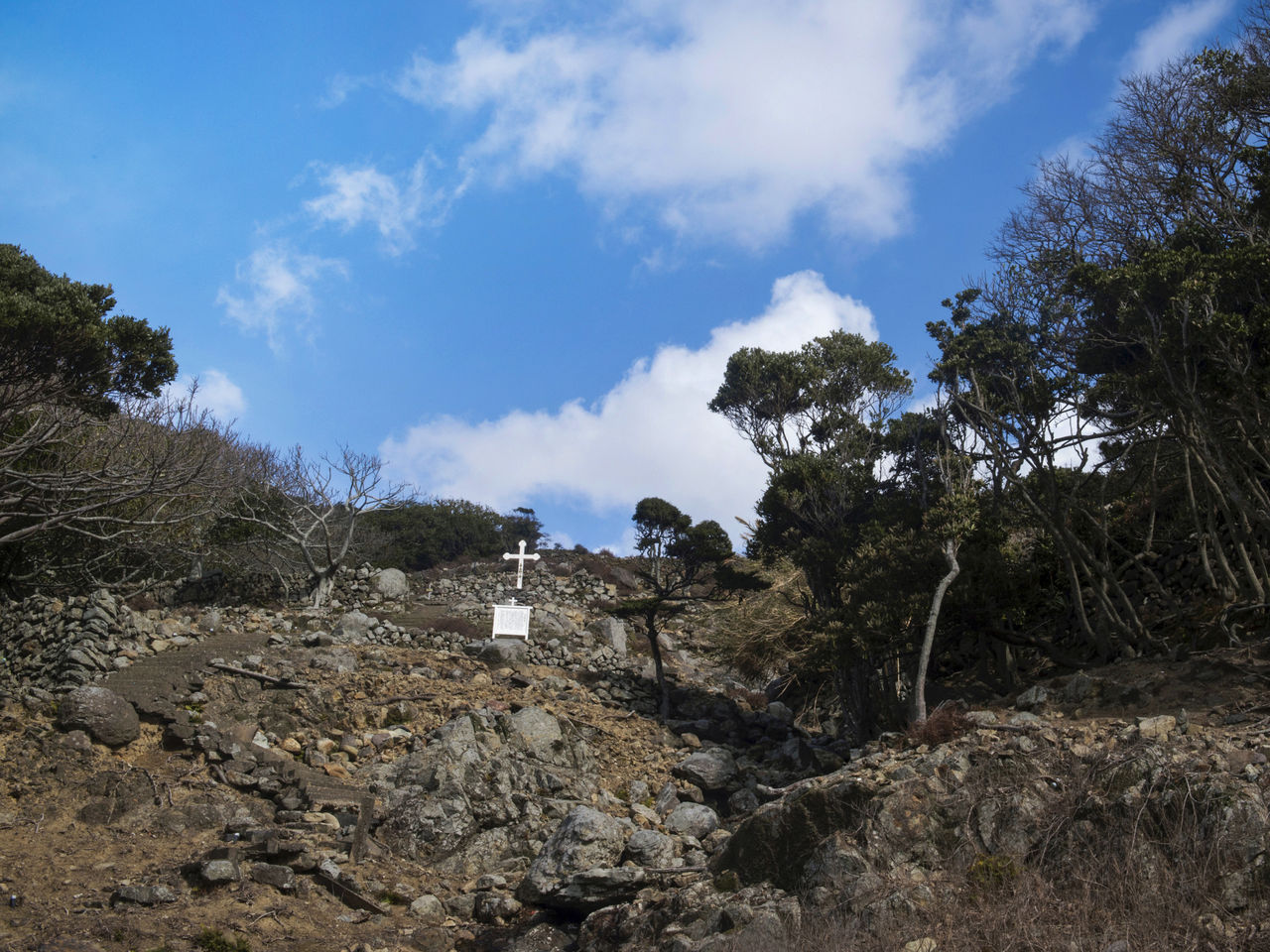 A lone white cross marks where the village of Funamori once clung to a steep slope. 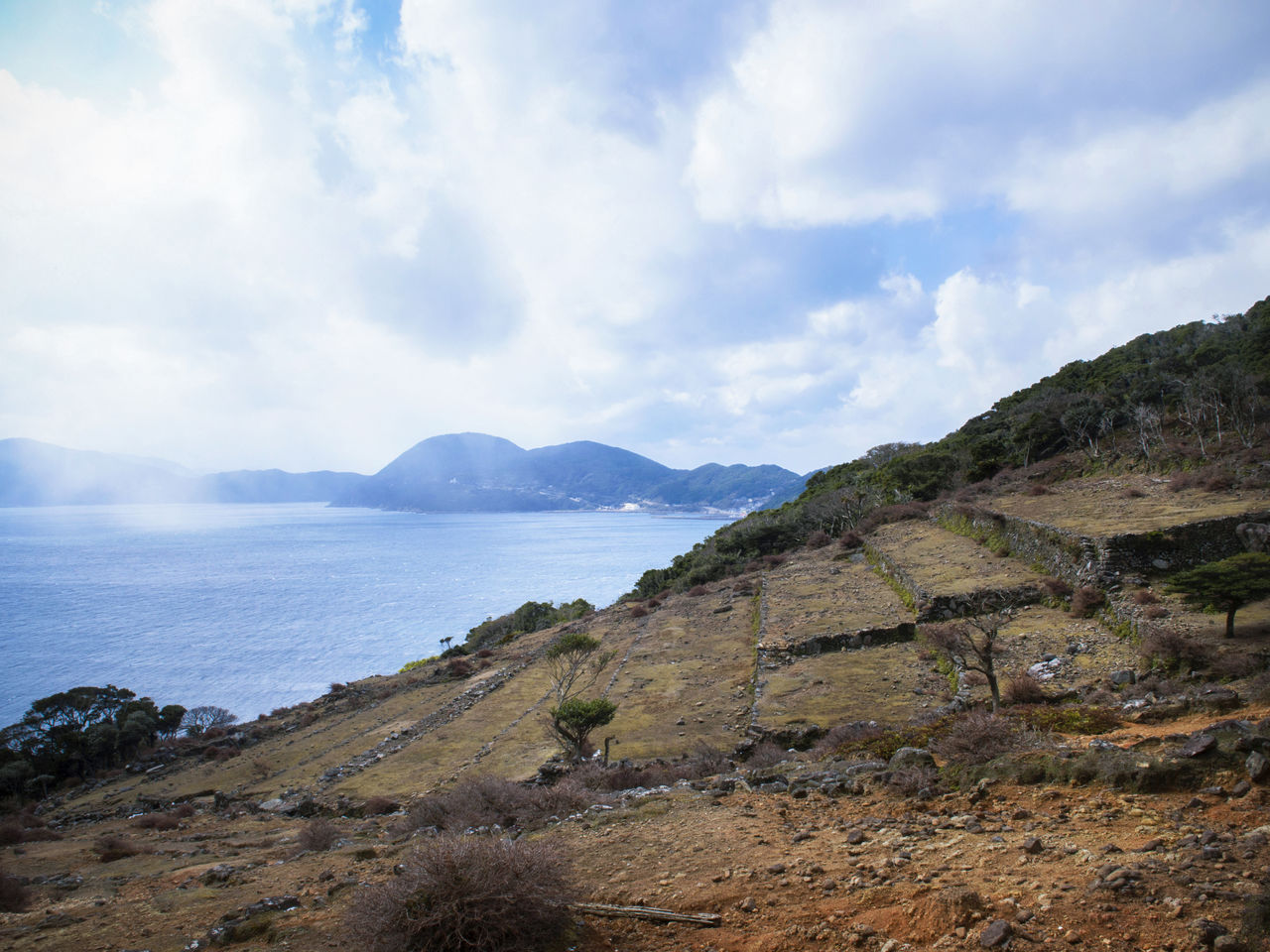 The abandoned terraced fields hint at a hard, grueling life.