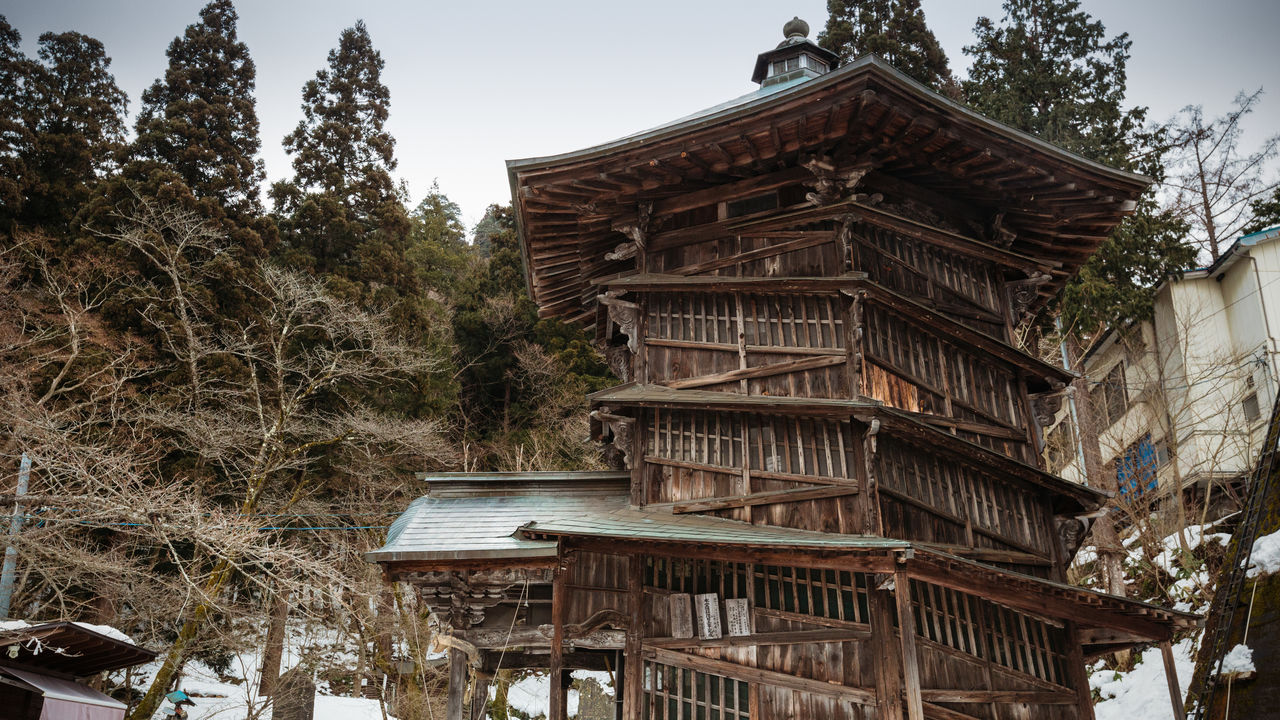 An Exercise in Eccentricity: The Aizu Sazaedō “Double-helix Maze”

On the flanks of Mount Iimori near Aizuwakamatsu, Fukushima Prefecture, where the last of the idealistic young warriors of the famed Byakkotai White Tiger Brigade committed mass suicide on August 23, 1868, after being defeated in their struggle to preserve the Tokugawa shogunate against the advancing armies on the side of restoring imperial rule, you will find a butsudō Buddhist sanctum unlike any other in Japan, and perhaps unlike any other building anywhere the world. This is the mysterious three-story wooden tower known as the Aizu Sazaedō, erected in 1796 on what once were the grounds of the now vanished Shōsōji Temple. Formally named the Entsū Sansōdō, the Aizu Sazaedō is a 16.5-meter tall structure said to have been the brainchild of Ikudō, the remarkable head priest of Shōsōji.

This weathered, lopsided structure is a striking enough sight just on its own. Yet what makes the Aizu Sansōdō so truly unique is not its remarkable external appearance, but what you find waiting for you within. Literally coiling around and throughout this ancient wooden structure is a sloping corridor that guides supplicant to the top of the tower and back down again along a continuous double-spiral ramp identical in design to the double helix of a DNA molecule. Since the traffic flow on the upward and downward slopes of this twisting passage never cross, the pilgrims and other visitors entering Aizu Sansōdō never see anyone coming out.

This unorthodox and unprecedented architectural feature has justly earned the  Aizu Sazaedō recognition as both a Designated National Important Cultural Property and a Japan Heritage site. 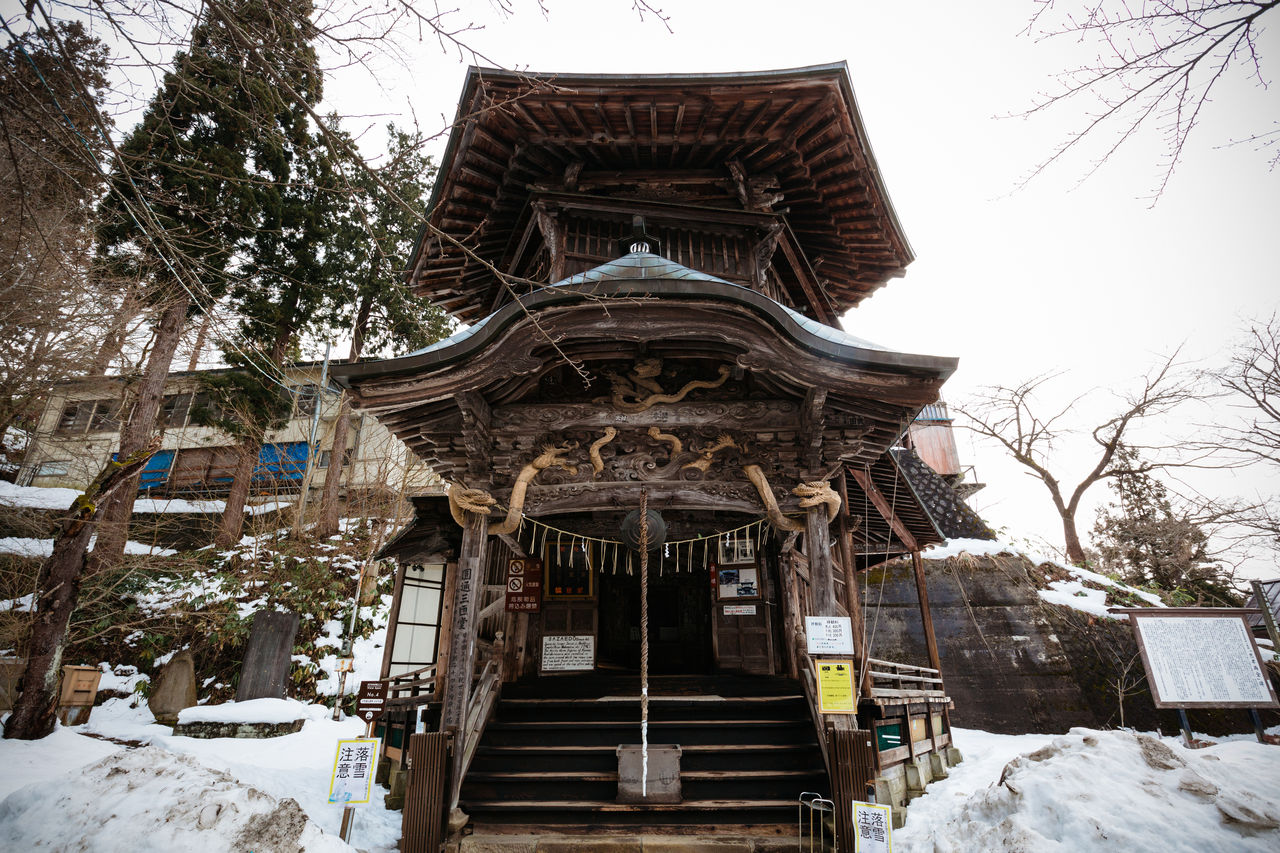 Shōsōji was closed  following the Meiji government’s 1868 Shinbutsu Bunri-rei (Edict for Separation of Shintō and Buddhism) and the establishment of State Shintō as the Japan’s official religion. However, the Aizu Sazaedō itself passed into private hands, and has been preserved to the present day. It was extensively rebuilt in 1890, but its unique structural elements live on unchanged. 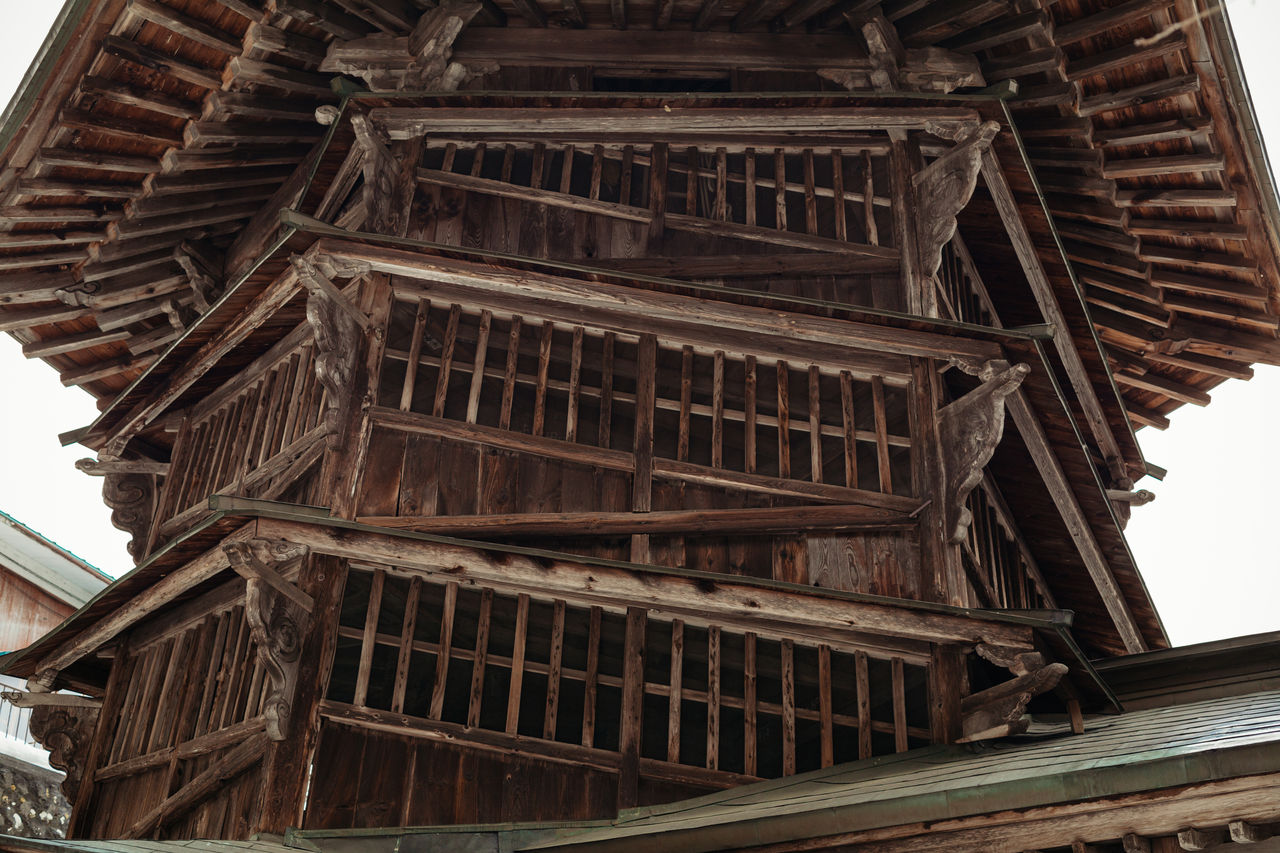 The sazae in Sazaedō is the Japanese name of the Turbo fluctuosa, the turbo sea snail with its curled shell.  When seen from the side, the Sazaedō looks like a giant wooden sazae, with its strikingly tilted hisashi outer rooms and windows.

What was the purpose behind this remarkable structure? According to Iimori Masanori, the Sazaedō’s present owner, there was more than a little “salesmanship” involved in the temple’s creation.

“Back in the day, the 33 Saigoku Kannon (the 33 most celebrated statues of the Kannon in western Japan) were all enshrined in this one temple,” says Iimori. “The idea was that pilgrims could get the same spiritual benefit from climbing and descending the Sazaedō as they could by walking the entire Saigoku Junrei western Japan pilgrimage route. The actual design was probably inspired by the word ‘meguru,’ to ‘go around,’ or in this case, to visit all the temples on a pilgrimage route.”

The Edo period (1603–1868) when the Sazaedō was built was marked by any number of “pilgrimage booms,” as Edo Japan’s increasingly affluent consumers began going on pilgrimages that combined both worship and tourism, as walking or bussing some of the famous pilgrimage routes that live on in contemporary Japan still does today. Both the O-Ise-mairi to the famous Ise Shrine in today’s Mie Prefecture and the Saigoku Junrei were favored pilgrimage routes. Since visitors to the Aizu Sazaedō could spiritually “complete” the entire western pilgrimage in just one stroll past the Bodhisattvas up and down the tower, you can imagine how popular it must have been at the time. 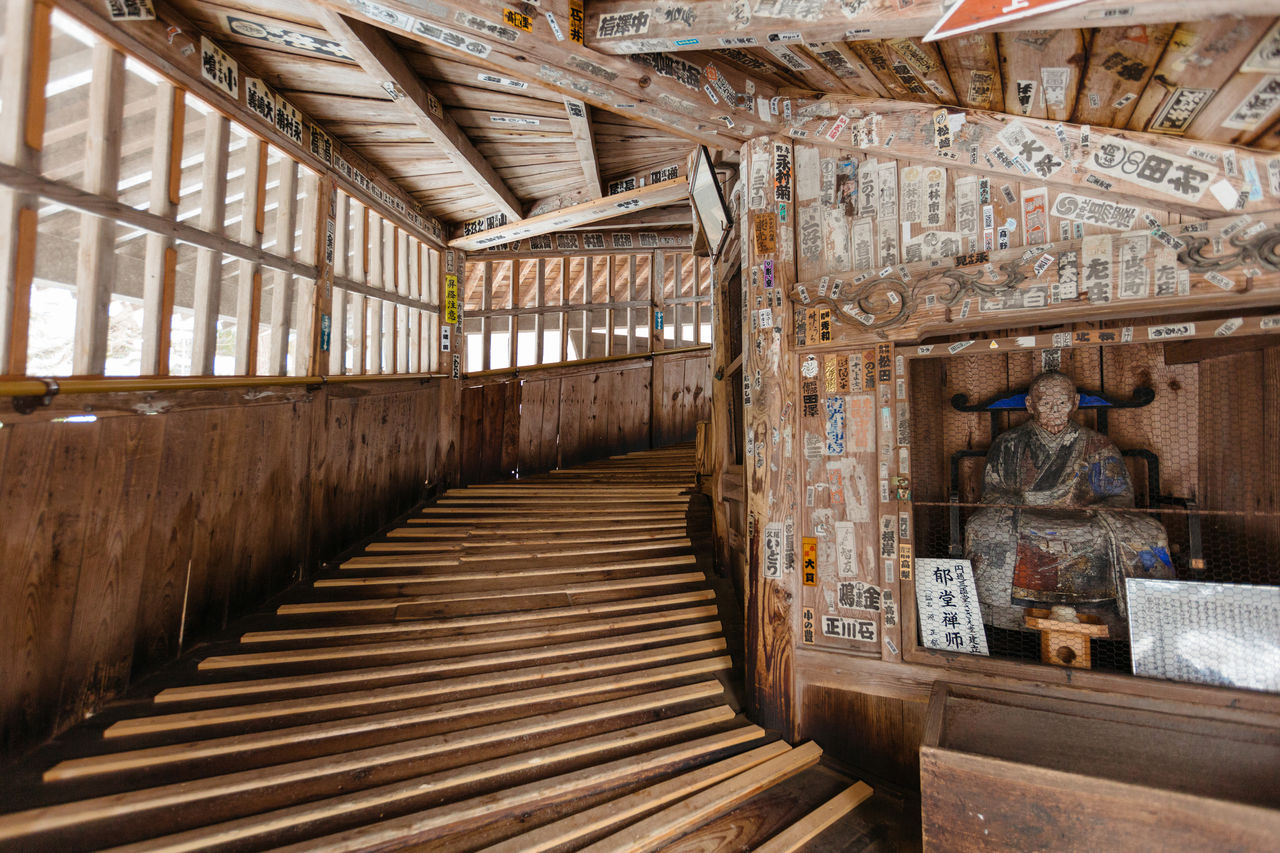 The upward twist of the helix as seen from Sazaedō’s entranceway. Cross boards laid across the floor prevent slipping. 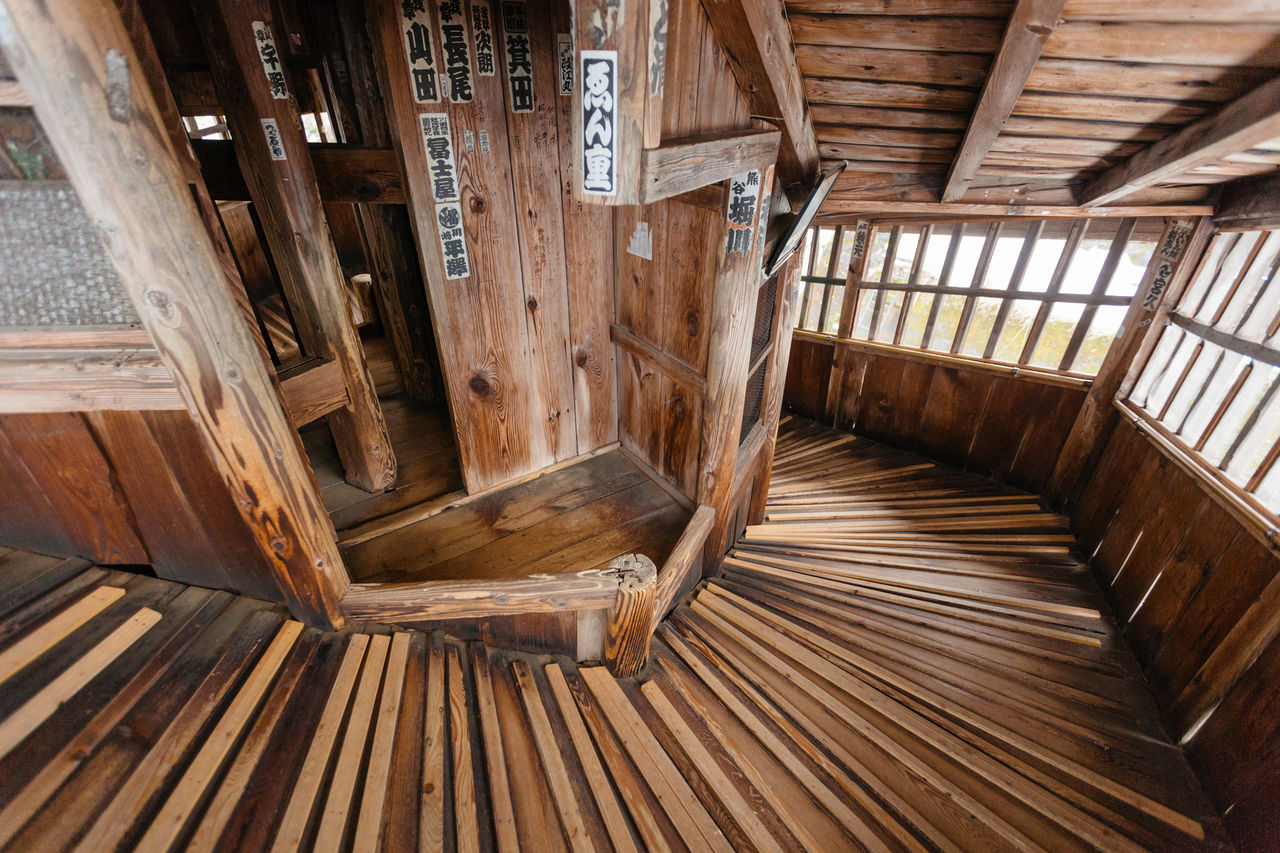 The upward slope looks like a whirlpool from above. In addition to being extremely steep, the floor planks themselves tilt in toward the center of the tower, throwing off your equilibrium.

The official name of the temple is Sansō, which means to “circle three times.” When you ascend one and a half clockwise turns of the passageway, you reach the top. Look up at the ceiling to see six roof beams forming a hexagon, confirming that the temple really does have six sides. The taikobashi arched bridge across the floorboards at the top is the dividing line between the ascent and the descent. Once you cross the bridge, you find yourself going down an equally steep counter-clockwise slope. One and a half turns down the tower, and you pop out an exit at the back of the structure. 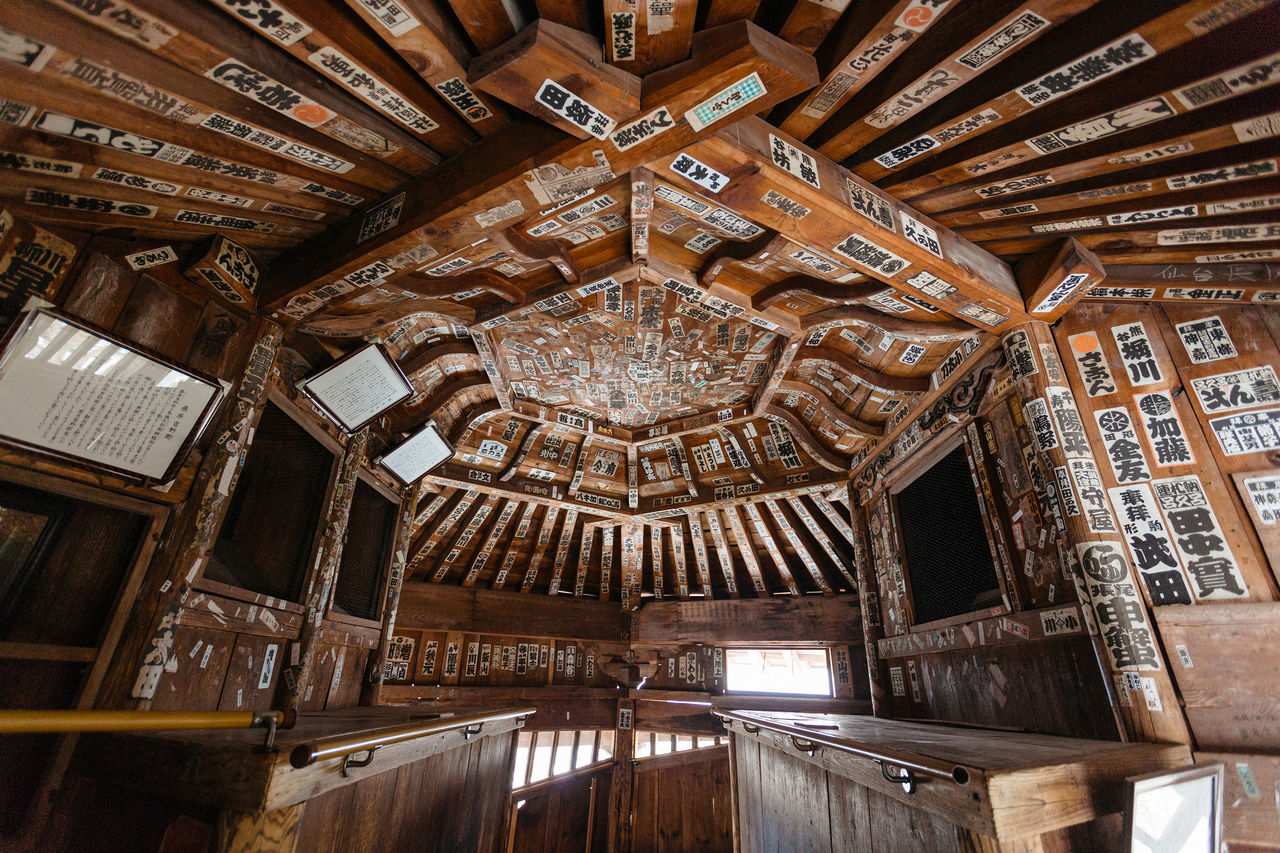 The walls and ceiling at the top of the temple tower are plastered with senja-fuda votive stickers, left both as prayers, and as proof to the higher powers that the mendicant really has visited the temple. 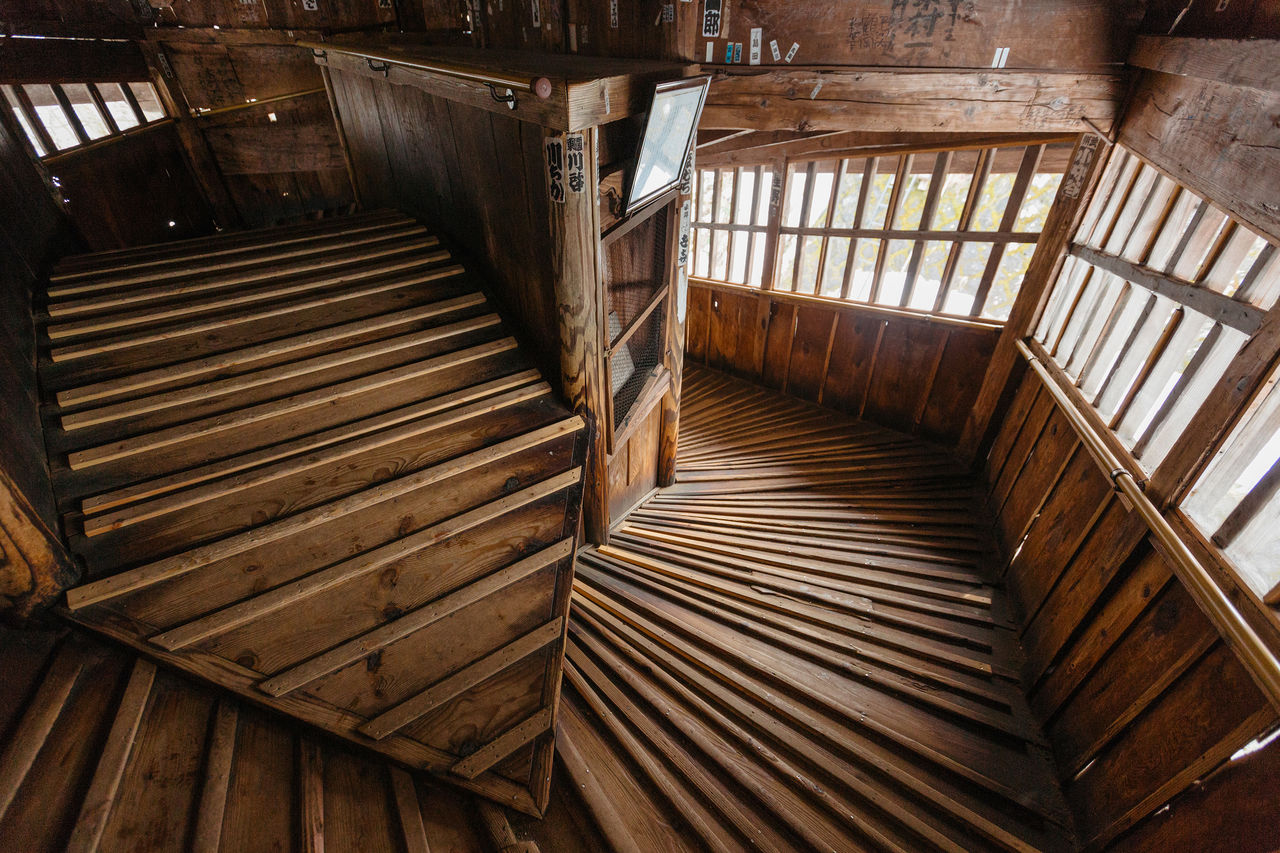 The arched bridge at the top of the Sazaedō double helix. The bridge is an optical trick that helps conceal how the upward and downward slopes have flipped. 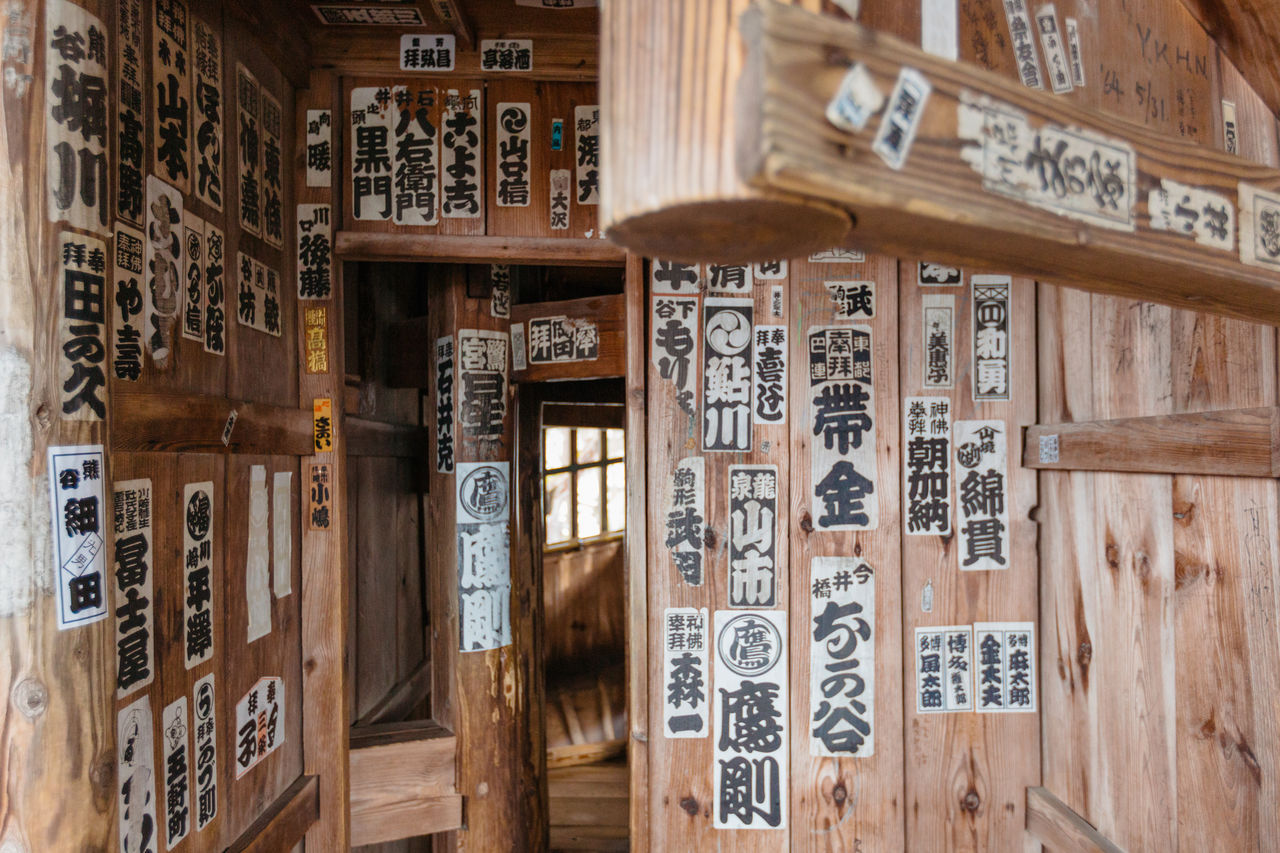 There are only three points in the entire temple where you can glimpse the opposite slope.

A Dream? Or a Hint from Leonardo?

The Aizu Sazaedō is truly a remarkable piece of architecture. Yet how on earth did such an outlandish structure come to be built in eighteenth century Japan in the first place?

There are many Buddhist temples bearing the name “Sazaedō” scattered across Honshū, from the Kantō region around modern Tokyo to the far north. Yet of all these many Sazaedō, the Aizu Sazaedō is the only one built in the form of a tower. Indeed, while you will find some notable double-spiral staircases in other countries, the Aizu Sazaedō remains the only known example of a double-spiral rampway for climbing a building anywhere in the world.

How, then, did it happen? According to Iimori, “the legend passed down in our household is that Ikudō was working on his concept for the temple when he had a dream. It was a dream of two pieces of paper, twisted together. And when he woke up, he had the idea for the temple, formed in his head.” 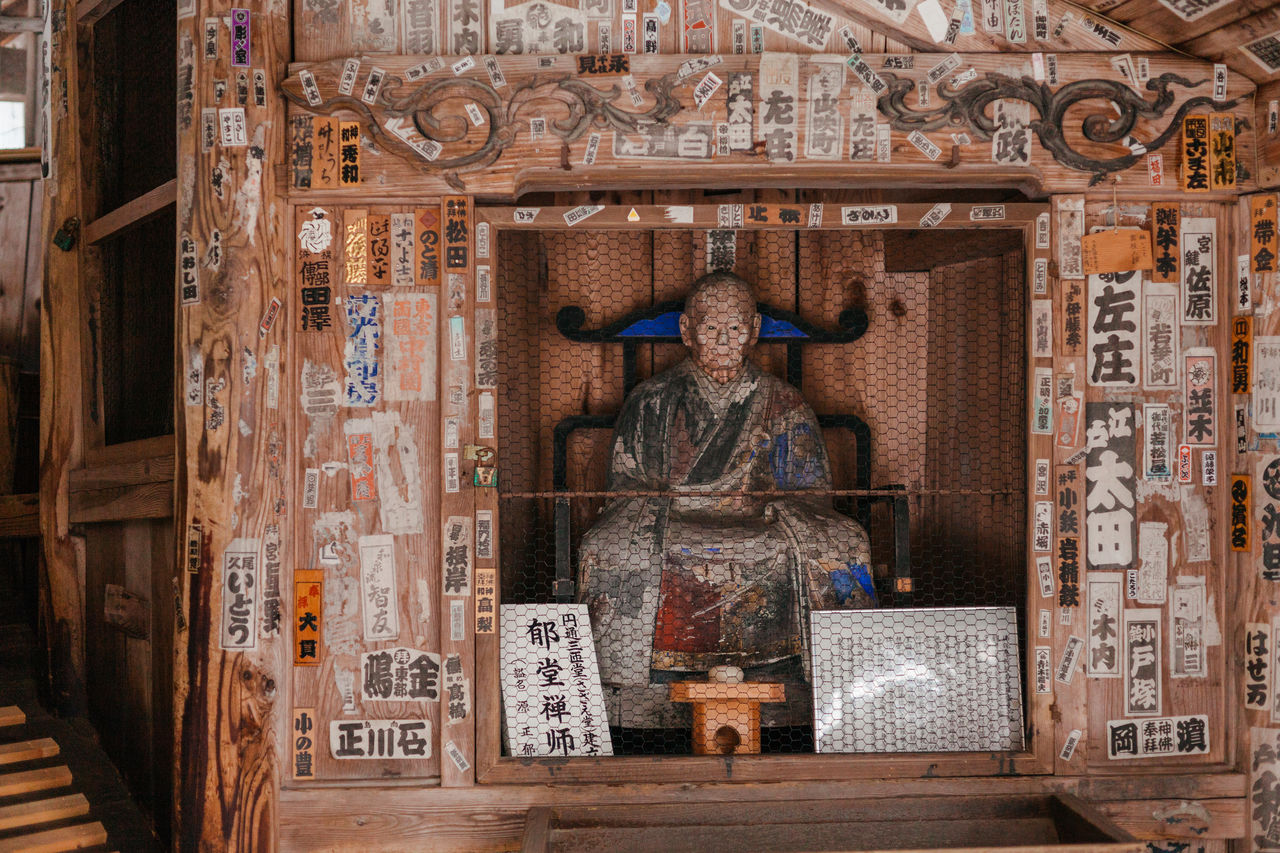 A wooden statue of head priest Ikudō, the designer of the Sazaedō, greets visitors at the entrance to the tower. Yet could there be another, less ethereal explanation? The Château de Chambord in France, begun in 1519 and completed in 1547 and today a designated World Heritage Site, has a three-story high double-spiral staircase that was reputedly designed by Leonardo da Vinci himself. There are some who argue that it was da Vinci’s concept that crossed the distant seas and made it to northern Japan.

It may not be as improbable as it sounds at first, if you realize how much information from the West was actually reaching Japan by the later Edo period. The speculation rests on a sketchbook left by Satake Yoshiatsu (1748-85), the lord of the feudal domain of Akita. Lord Satake was an accomplished artist in the Western-influenced art tradition then known in Japan as ranga, or “Dutch pictures.” Lord Satake’s sketchbook contains a drawing of a double-spiral staircase that he copied from an edition of the book Practical Perspective, or, Perspective Made Easie by the British writer and artist Joseph Moxon, first published in London in 1670.

From da Vinci to Moxon, then on to Satake? If it had already come this far around the world, could not the idea for a double-helix staircase travel the much shorter distance from Akita to the Aizu domain? It stirs the romantic’s heart just imagining it.

Whatever the ultimate truth may prove to be, we still must admire Ikudō’s remarkable creativity in envisioning a temple lined with images of the Kannon, where visitors could make their “pilgrimage” simply by ascending and descending a double-spiral ramp, as well as the astonishing workmanship and technical expertise of the Edo period craftsmen who built this remarkable wooden structure so many years ago.

We hope you will visit Fukushima Prefecture’s Aizu Sazaedō, take the time to ascend and descend its intertwined ramp ways not just once but as many times as you want, examining every detail along the way as you savor the mysterious allure of this most peculiar of temples. 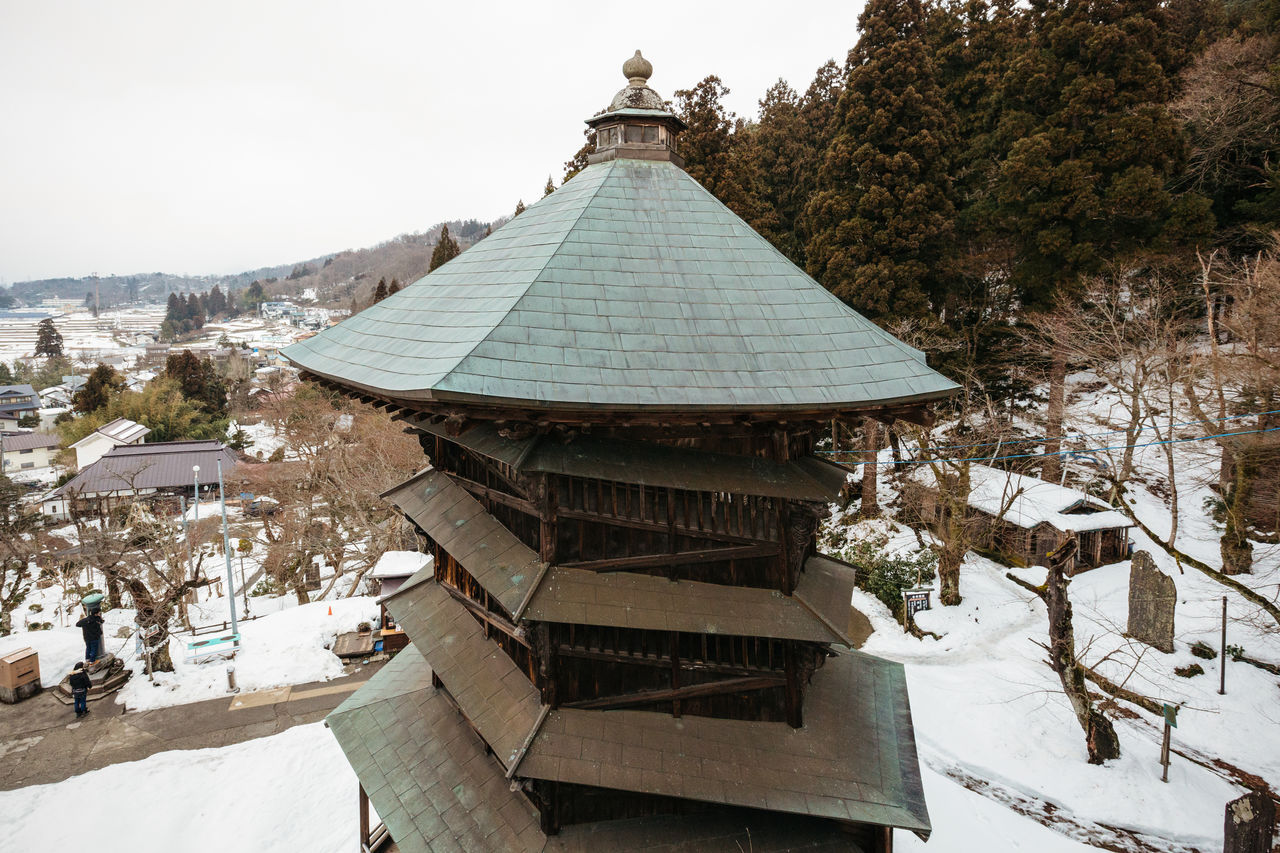 The path to the graves of the Byakkotai, enshrined higher up the flanks of Mount Iimori, affords a sweeping view of the Sazaedō and the countryside beyond.

(Originally published in Japanese on March 31, 2018. Reporting and text by Yamaguchi Noriko. Photographs by Yamazaki Yoshinori.)