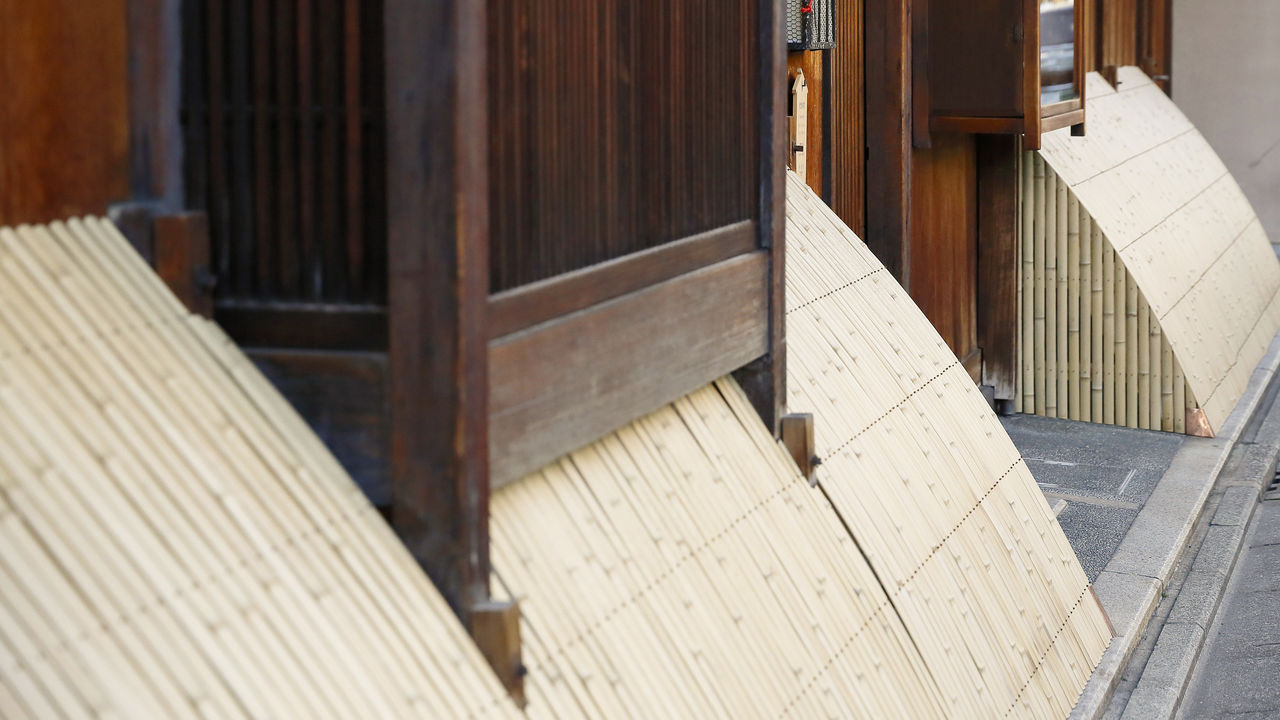 Jun 1, 2018
Kyoto is frequented by over 50 million visitors a year. One of the city’s charms is an elegant townscape of traditional townhouses standing in rows at uniform height. Familiarity with key features of these machiya—kawara roof tiles, shape of windows, and the color and size of lattices—can make your visit to Japan’s historical capital more enjoyable and rewarding.

Kyoto machiya are defined as traditional-style wooden residences built before 1950. Some 40,100 such townhouses remain in the city, which was spared aerial bombardment during World War II.(*1)

“The style of Kyoto townhouses we still see today established itself around the middle of the Edo period [1603–1868],” explains Matsui Kaoru, who, in addition to heading his own architectural firm, serves as the director of an industry group seeking to preserve and find new users for Kyoto’s machiya. “There were two devastating fires in the city, one in 1708 and another in 1788. In the wake of those fires, authorities established building standards to facilitate the city’s reconstruction.” 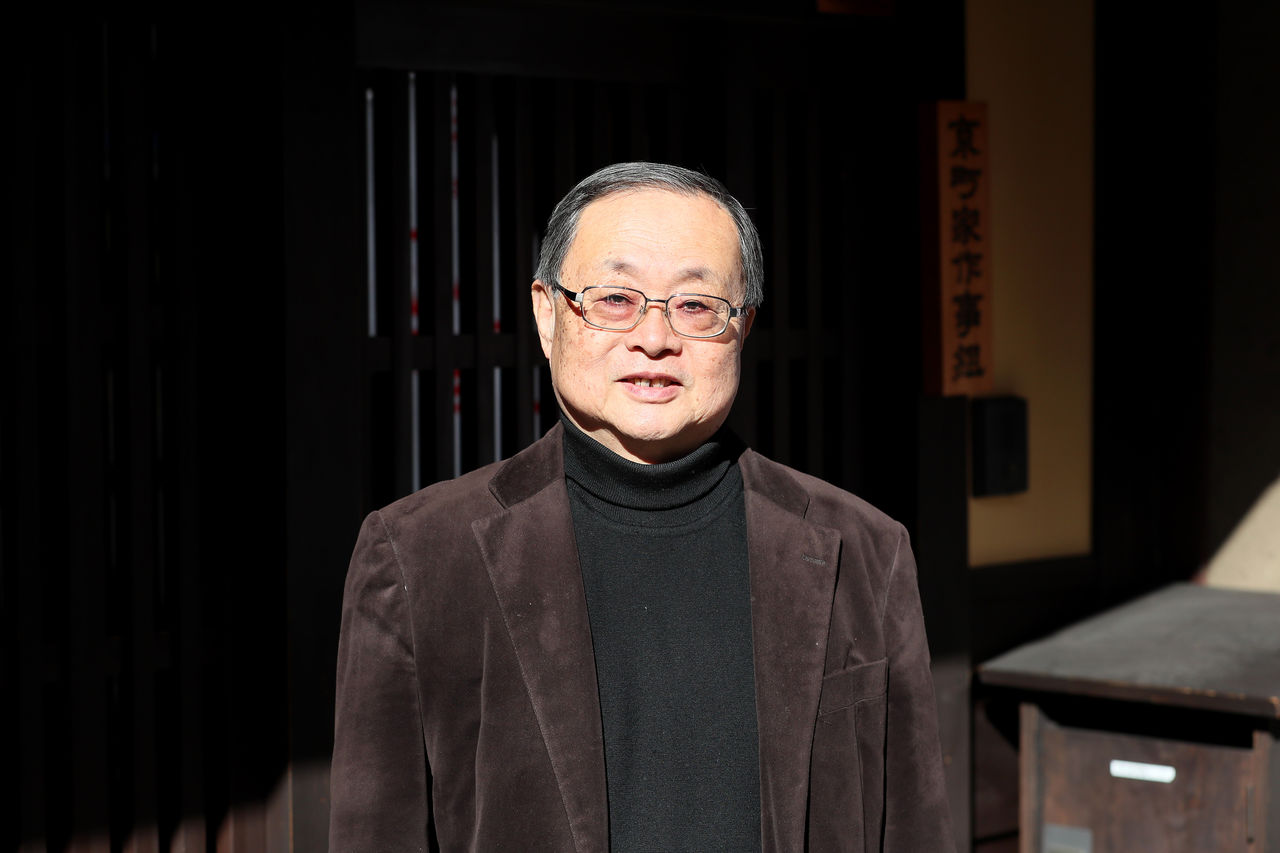 Matsui Kaoru hopes to save traditional Kyoto townhouses from extinction by finding new buyers and renters for them.

On close inspection, Kyoto machiya are full of innovations designed to enhance their resistance to fires and other disasters, as well as to make life more comfortable. They also offer valuable insights into the way people lived and worked in the premodern era. 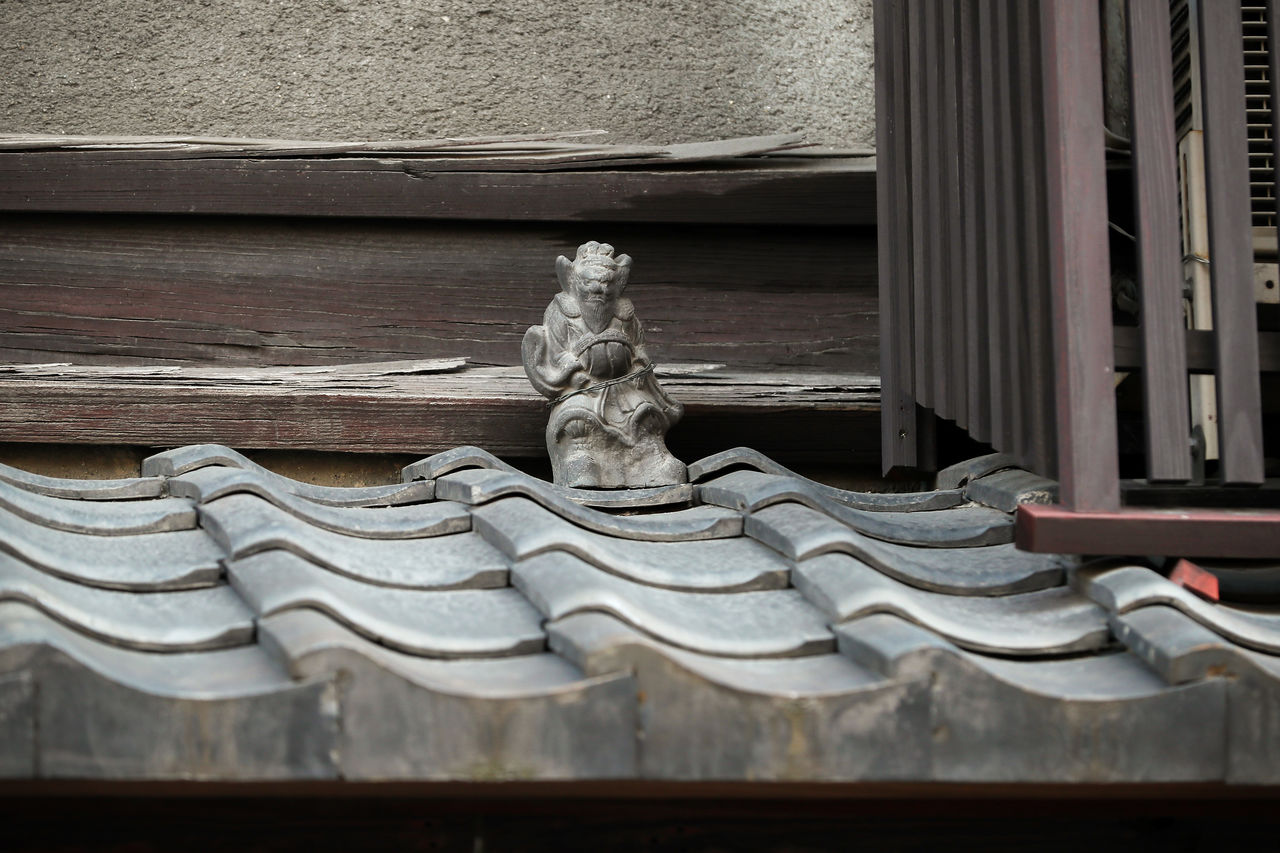 Let us start with the roof. In looking at a row of townhouses, one notices that the eaves of these homes, although projecting at a uniform angle, are of uneven height. In fact, they overlap with the eaves of the house next door. This, Matsui says, is an ingenious way of preventing rain from leaking between two homes.

Another feature of machiya roofs is that the edges form a perfectly straight line and are left unadorned—a style known as ichimonji. This accentuates the curves created by the neatly aligned dark-gray kawara tiles to produce a wave-like effect. Rows of houses with ichimonji roofs, which require great skill to build, are an endearing feature of Kyoto neighborhoods. 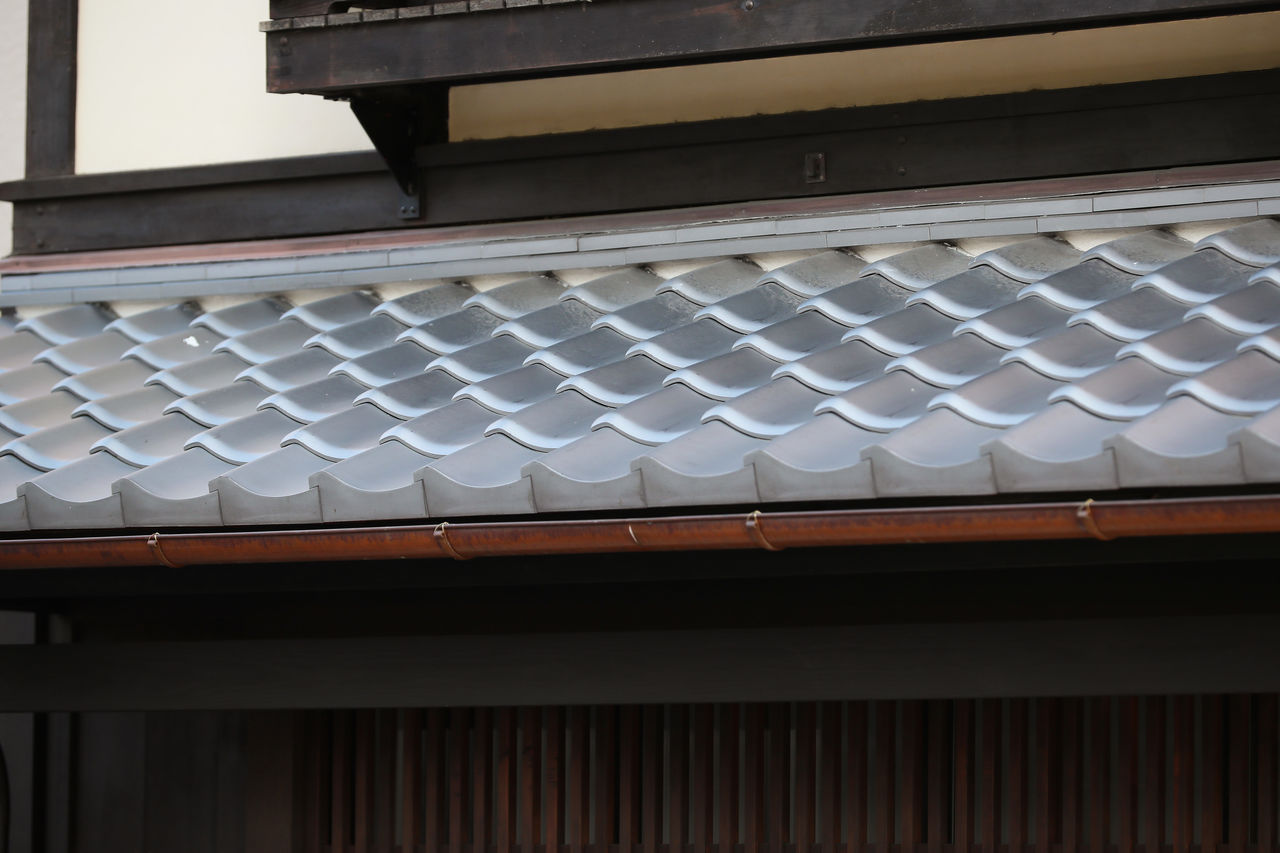 A kawara tile roof laid out in the simple yet graceful ichimonji style.

On some rooftops are perched small, gargoyle-like clay figures. They represent Shōki of Chinese folklore (Ch. Zhong Kui) who was said to have vanquished evil spirits that caused the eighth-century Tang Emperor Xuanzong to fall ill and thus came to be regarded as a guardian deity.

Legend has it that when the owner of a new house in Kyoto placed a typical onigawara (a tile or statue of an oni, or ogre) as a roof ornamentation, the wife of the family living across the street became ill. A physician identified the cause of the illness as the neighbor’s oni, and recommended placing a protective Shōki statue on the woman’s family’s roof. They did so and she soon regained her health.

This is believed to be the reason several hundred machiya in Kyoto still have Shōki on their rooftops. This guardian spirit of Chinese mythology can be found in many different poses and with various facial features along streets of traditional townhouses. 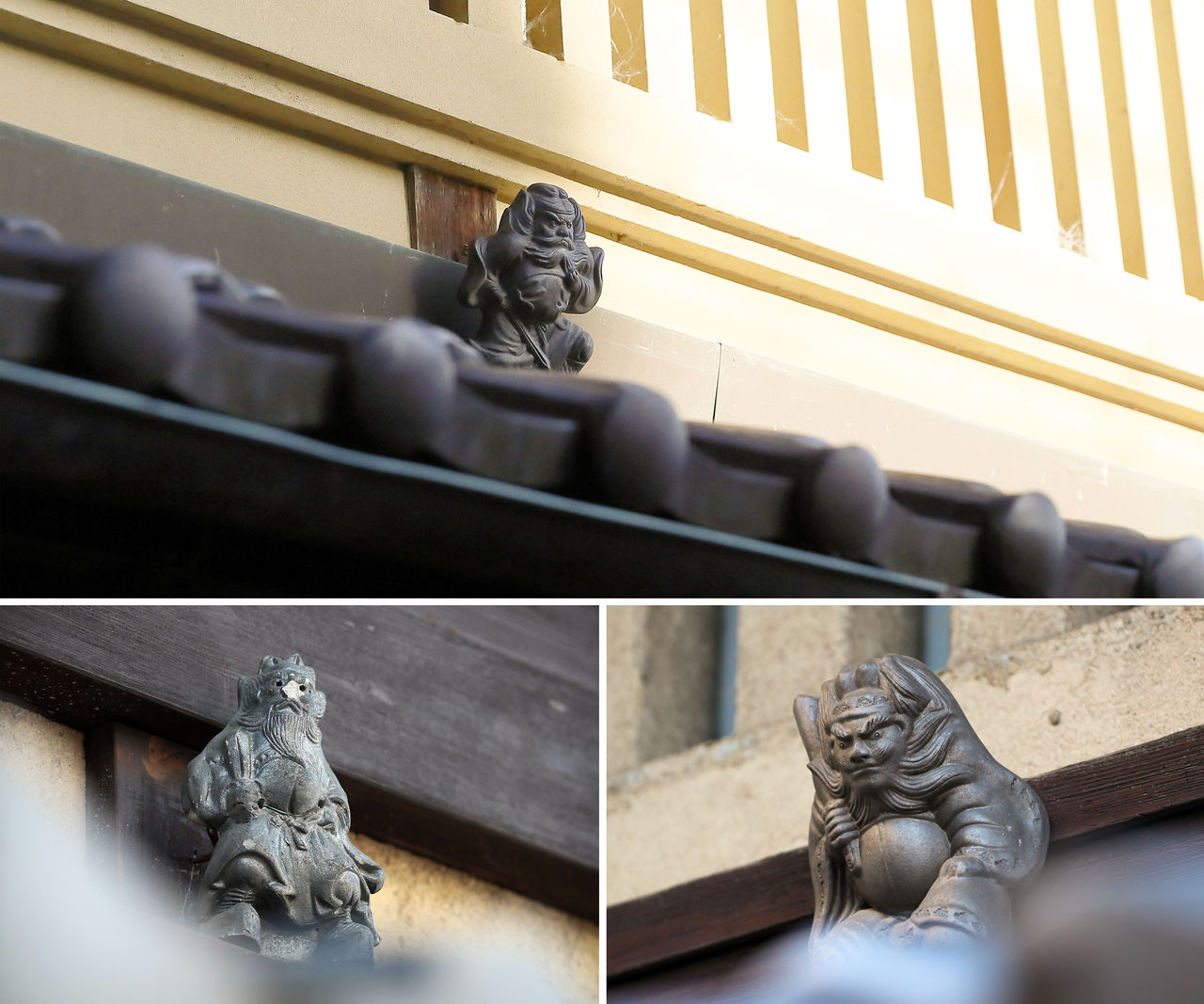 The many different features of Shōki statues.

Just below the roof is the mushiko-mado, a small lattice window fixed into the plastered earth walls on the second floor. This design, seen in tsushi-nikai townhouses with a low second-floor ceiling, is thought to have been contrived as a fire-prevention measure.

“The roof of tsushi-nikai homes,” Matsui explains, “is low enough to prevent flames from spreading when the house across the street catches fire.” The two tragic fires that engulfed the city in the eighteenth century taught the people of Kyoto that—given the width of the streets and the movement of the flame—they could minimize damage by keeping the buildings below a certain height. 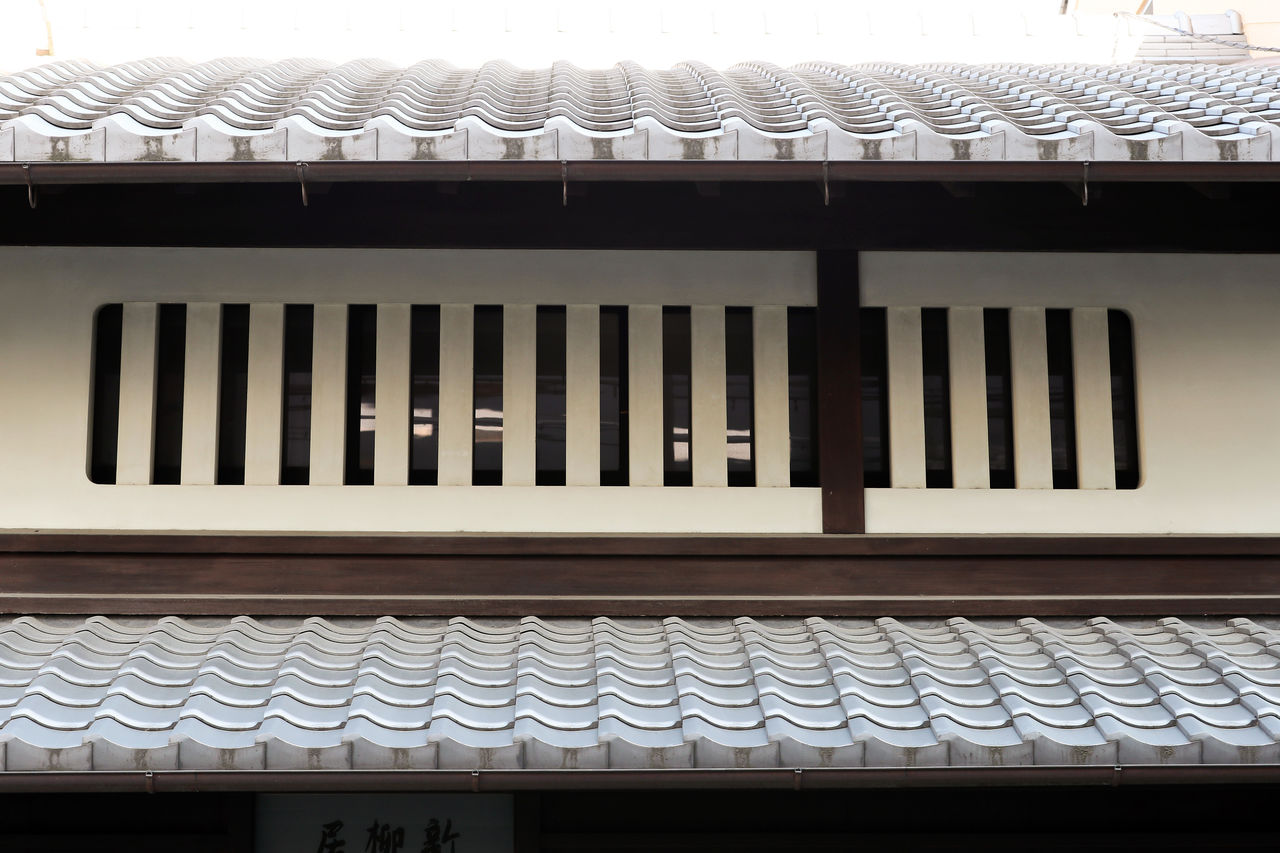 The low second floor of tsushi-nikai homes was used as servants’ sleeping quarters and as storage space.

Lattices are another prominent feature of Kyoto machiya. They evolved as a security measure during a period of social upheaval and military conflict triggered by the Ōnin War (1467–77). At first glance, all lattices appear the same, but a closer look reveals considerable variety in the arrangement and thickness of the latticework, usually reflecting the profession of the machiya owner. 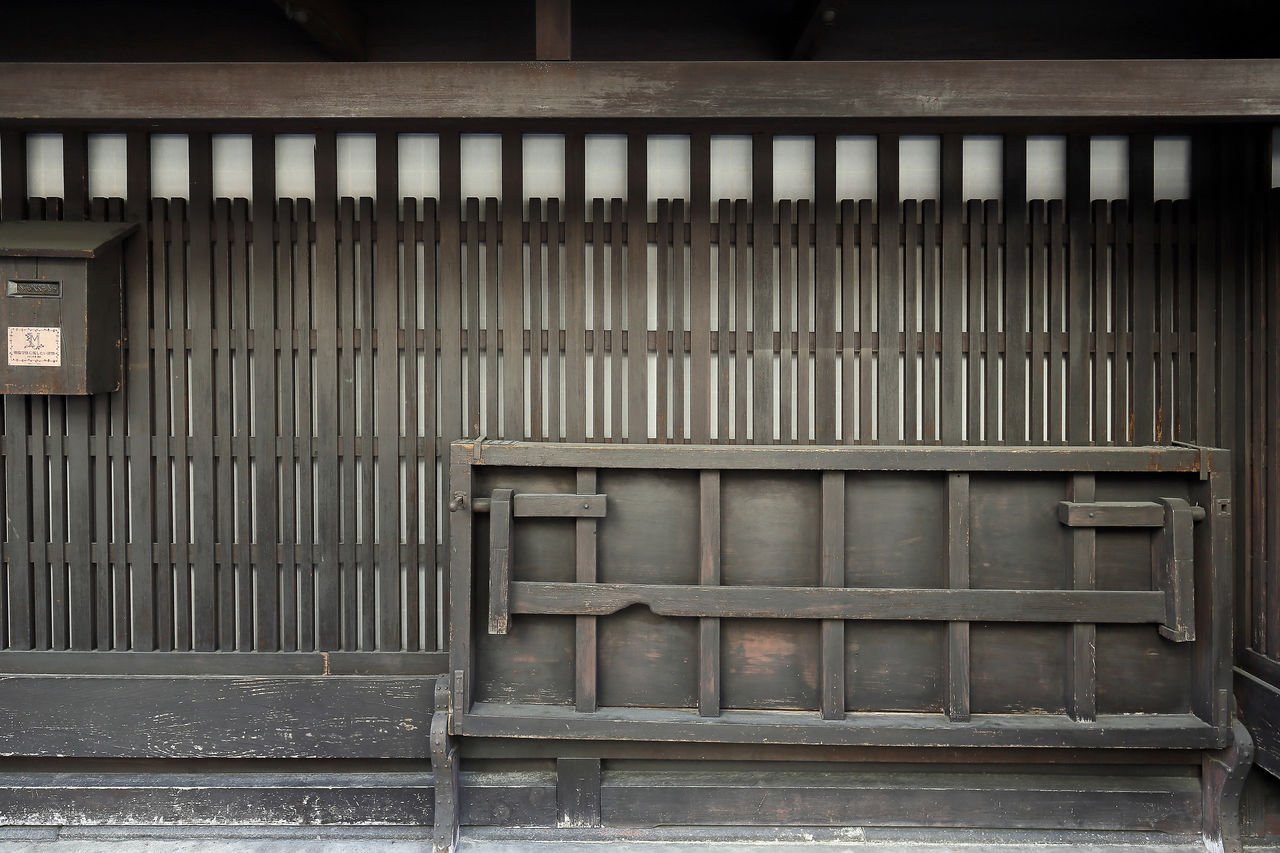 A machiya with itoya lattices and a battari shōgi folding table (right). The latticework does not reach the ceiling so that sunlight can pass through.

Households engaged in dying, weaving, or selling textiles adopted itoya (yarn shop) lattices that let in sunlight from the top so that colors could be seen more clearly. Those dealing in sake casks, bales of rice, and other heavy items opted for sturdier sakaya (liquor shop) and komeya (rice shop) lattices. Shimotaya lattices, using narrower strips of wood, meanwhile, were for residents who had “closed shop.” 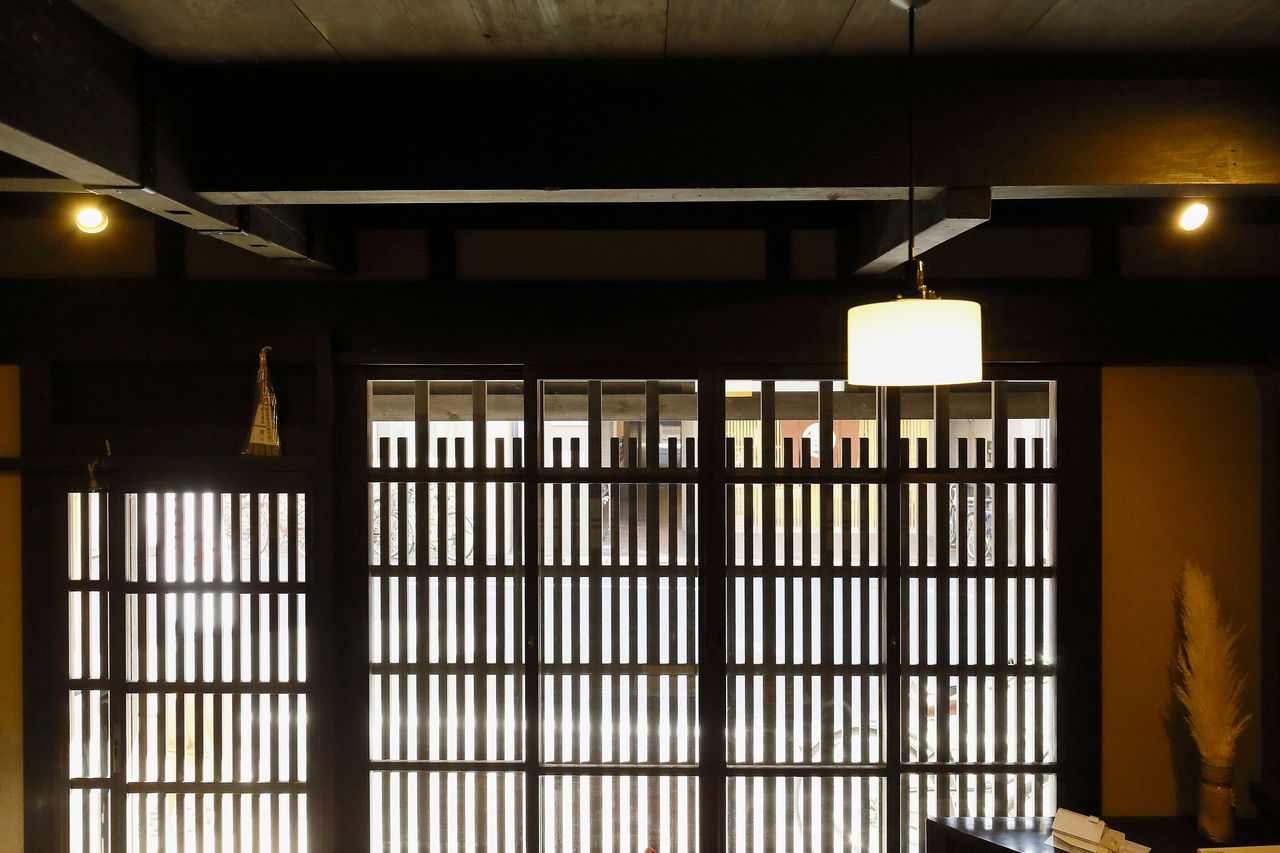 Lattices allow light to pass but keep probing eyes out.

There are a number of machiya that still have a battari shōgi, which are tables that can be folded up against the lattice. “When I was growing up, I would hear shop owners lowering their battari shōgi and lifting up the hajitomi shutters every morning,” says Matsui. But this, he says, has become a thing of the past. 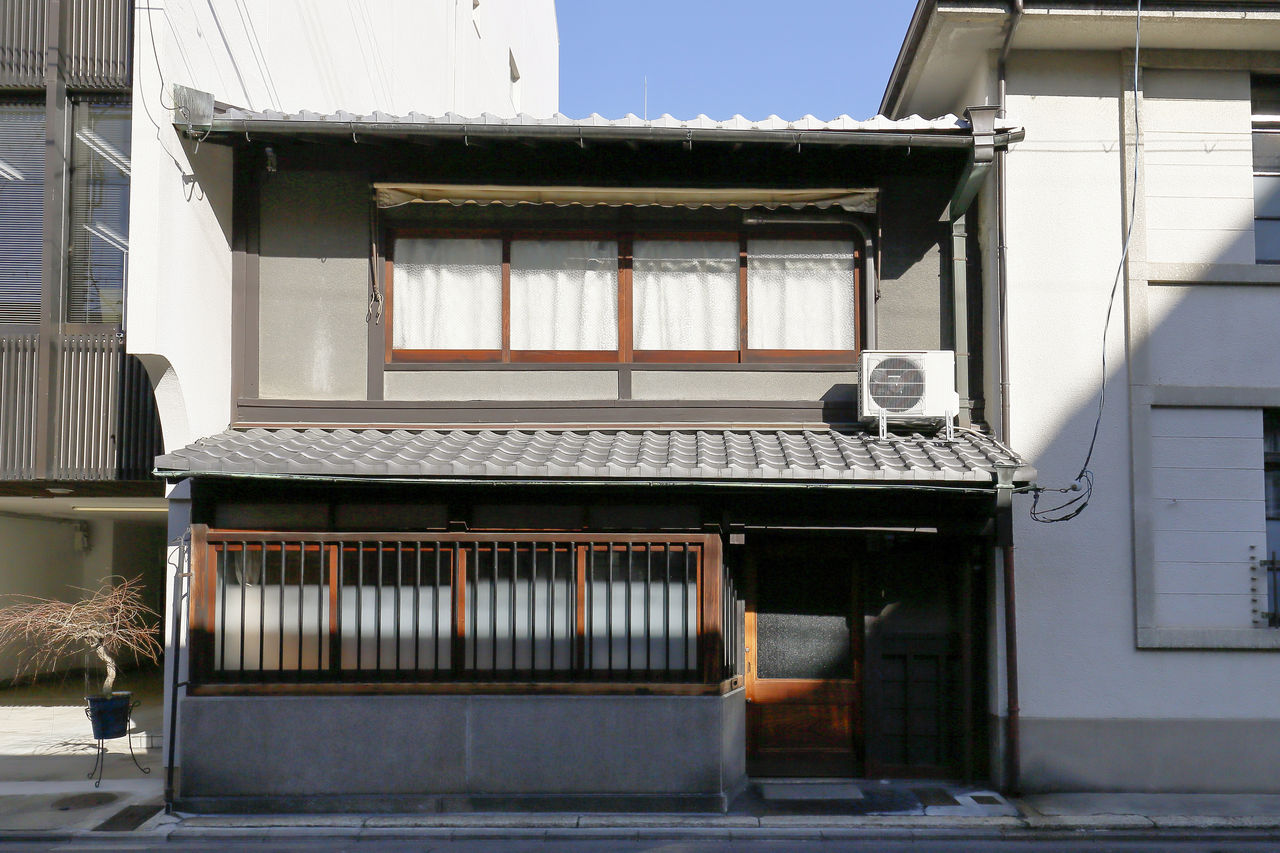 Early twentieth-century machiya replaced the lower half of the lattice with a concrete wall and wooden latticework with metal bars.

Fences for Dogs and Horses 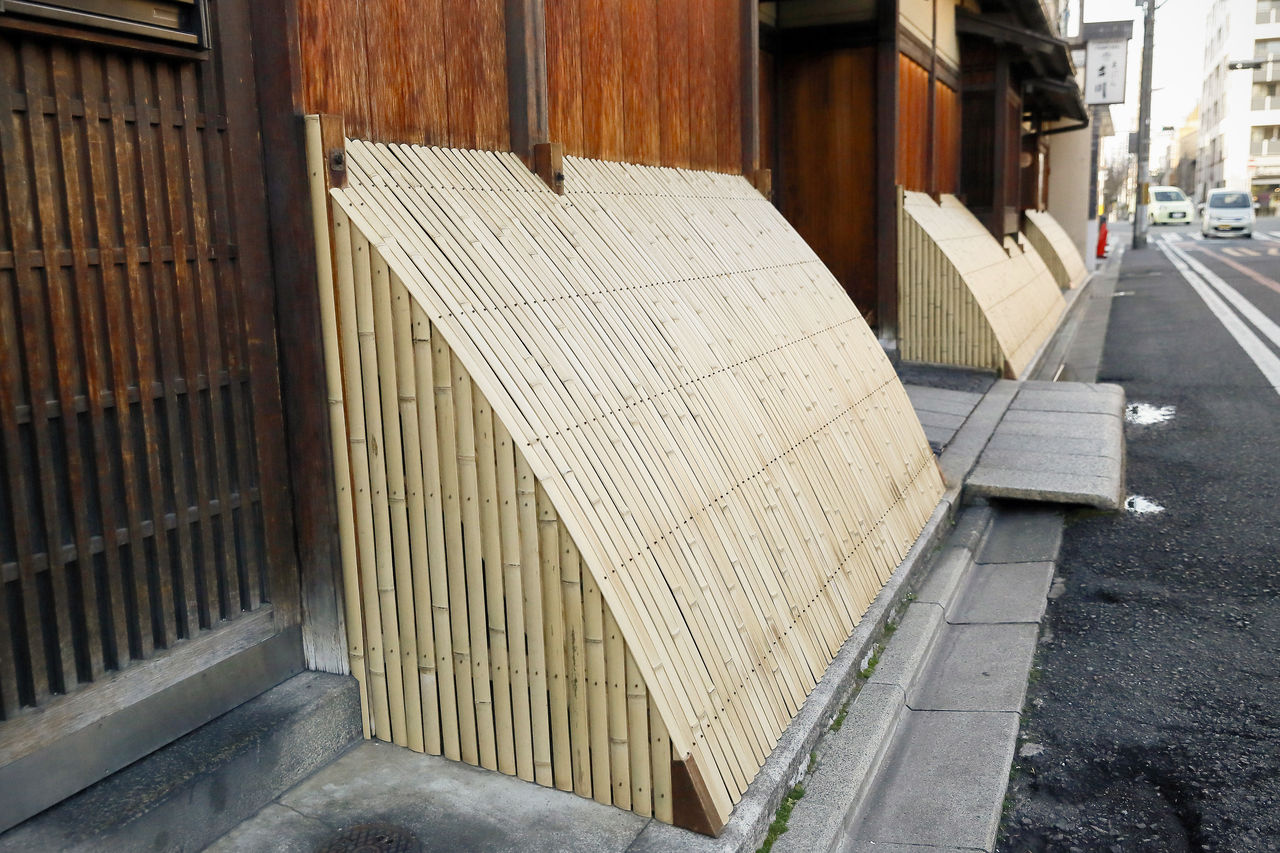 Inuyarai is not just a decorative element but has practical uses as well.

Protecting the lower walls and lattices of a machiya against rain, dirt, and urinating dogs are arched strips of bamboo called inuyarai (dog fence). A komayose (horse station), meanwhile, is a fence made of hardwood like chestnut or zelkova that creates space between the street and the house (thus keeping strangers away), although the name implies it was originally meant for tethering horses. 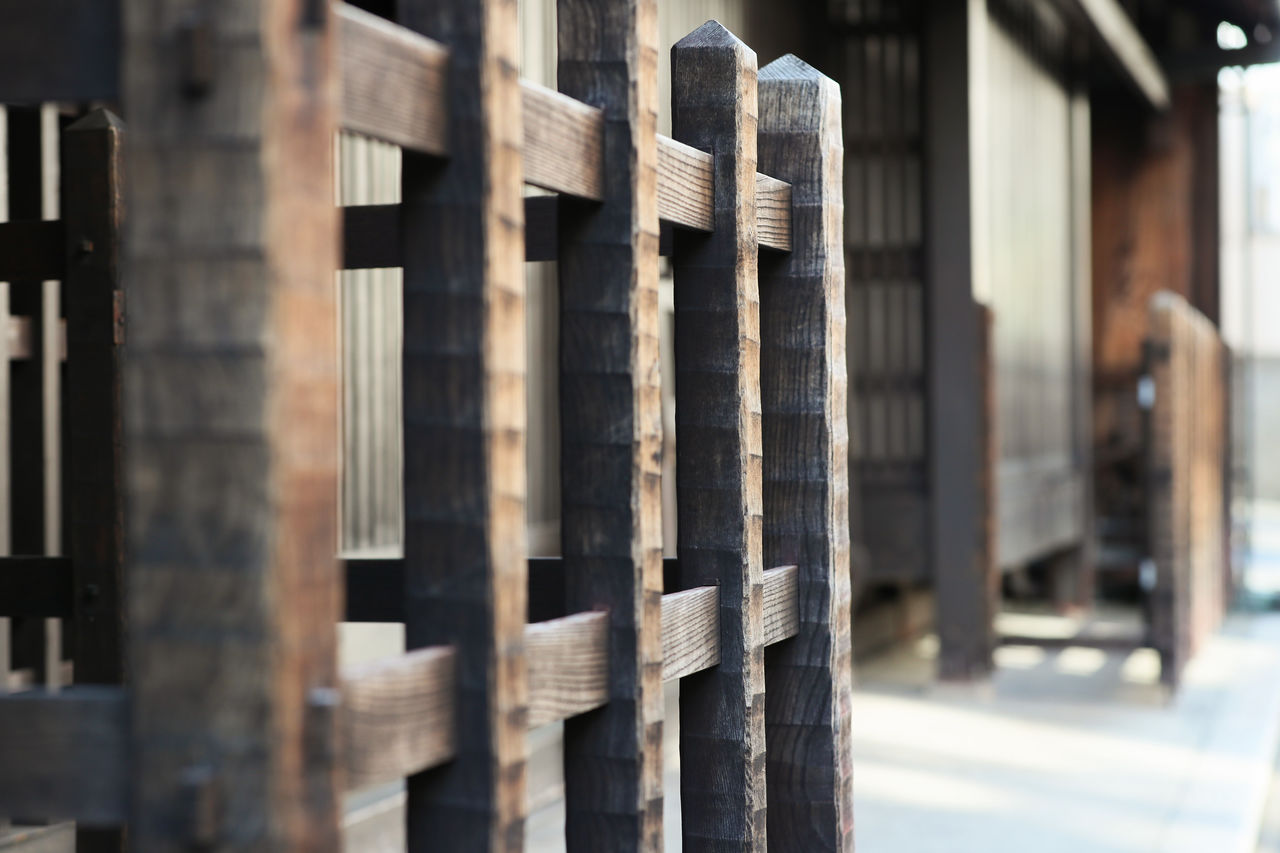 The surface of komayose beams is often decoratively carved with an adz.

Traditional machiya can be found in the old sections of Kyoto, including Gion, Nishijin, and along Shinmachi and Muromachi Streets in Nakagyō Ward. They may all seem similar on the surface but actually have design features that make each one unique. Looking for such differences can make a stroll through this historical city that much more enjoyable.

(Originally published in Japanese on April 26, 2018. Interview and text by Sugimoto Kyōko. Photos by Hamada Tomonori.)