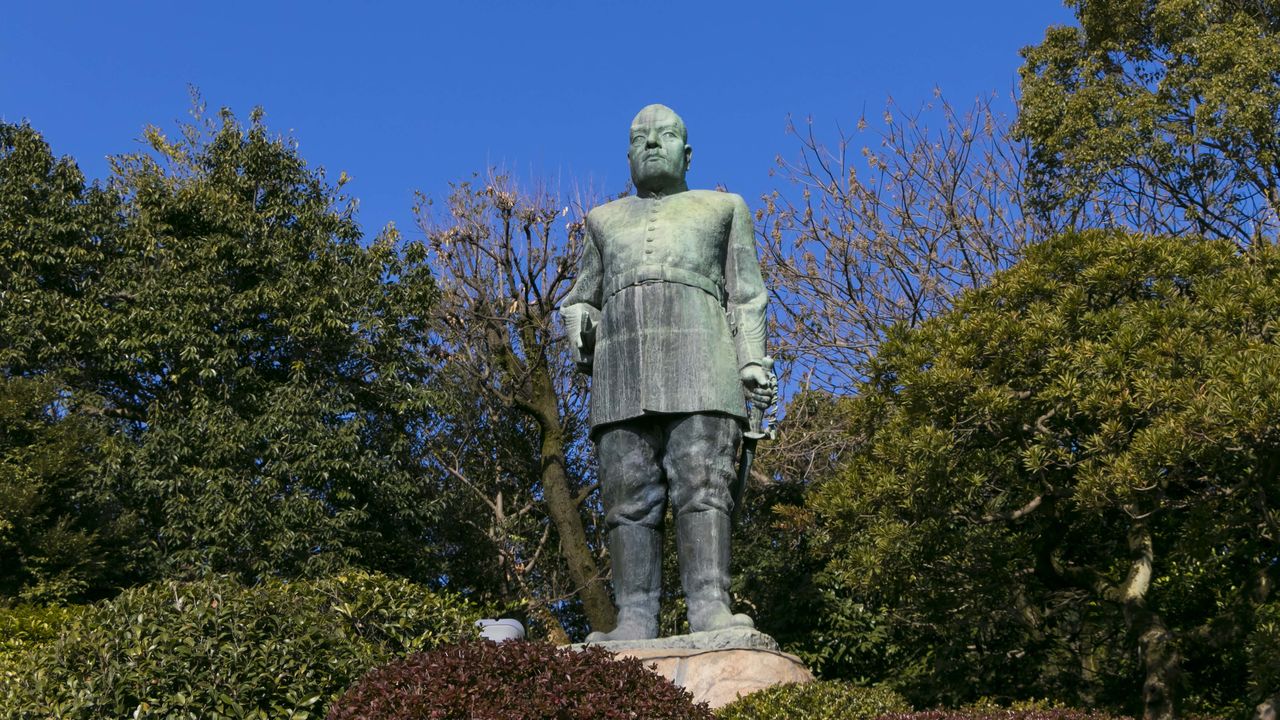 Jun 7, 2018
This year marks the 150th anniversary of the 1868 Meiji Restoration, which opened the path to Japan’s modern age. Many outstanding figures of this great historical movement, which overthrew the Tokugawa government to establish the Meiji state, emerged from the Satsuma domain—now known as Kagoshima Prefecture. This was the birthplace of Saigō Takamori, considered one of the three great leaders of the Meiji Restoration. Historical sites and facilities related to Saigō can be found throughout the city of Kagoshima, which is where he also met his demise in 1877.

The Birthplace of Satsuma’s Heroes

Saigō Takamori was born in 1828 in the Kajiyachō district of Kagoshima as the eldest son of a low-ranking samurai. Today his birthplace is a park with a monument dedicated to his memory. Kajiyachō, where lesser samurai families lived, was also the birthplace of many other great figures of the Meiji Restoration, including Ōkubo Toshimichi, Ōyama Iwao, Tōgō Heihachirō, and Yamamoto Gonnohyōe. 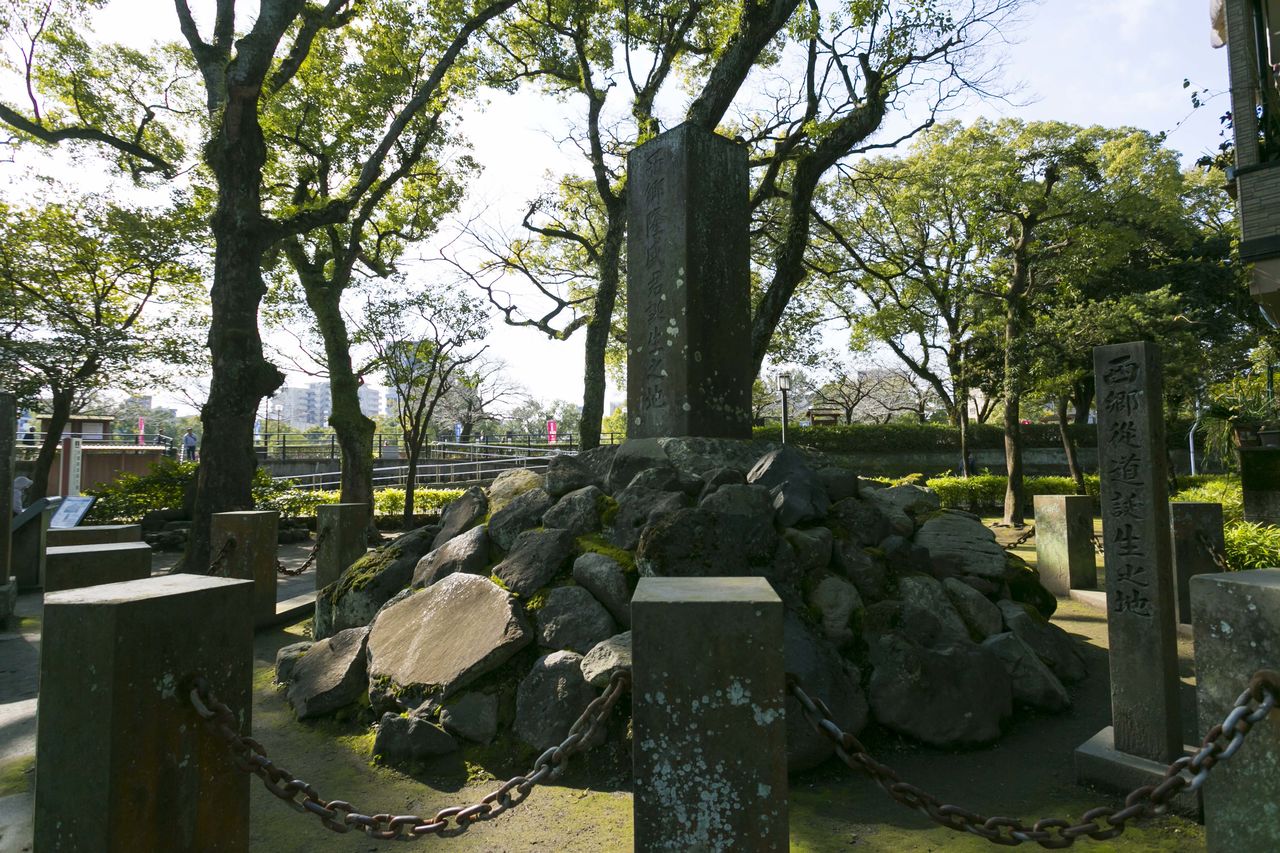 The monument marking the birthplace of Saigō Takamori.

Just a minute’s walk from the birthplace of Saigō is the Museum of the Meiji Restoration. Using dioramas, videos, and high-tech displays, the museum presents accessible, entertaining highlights on the great leaders from Satsuma who helped to overthrow the Tokugawa government and build the Meiji state. 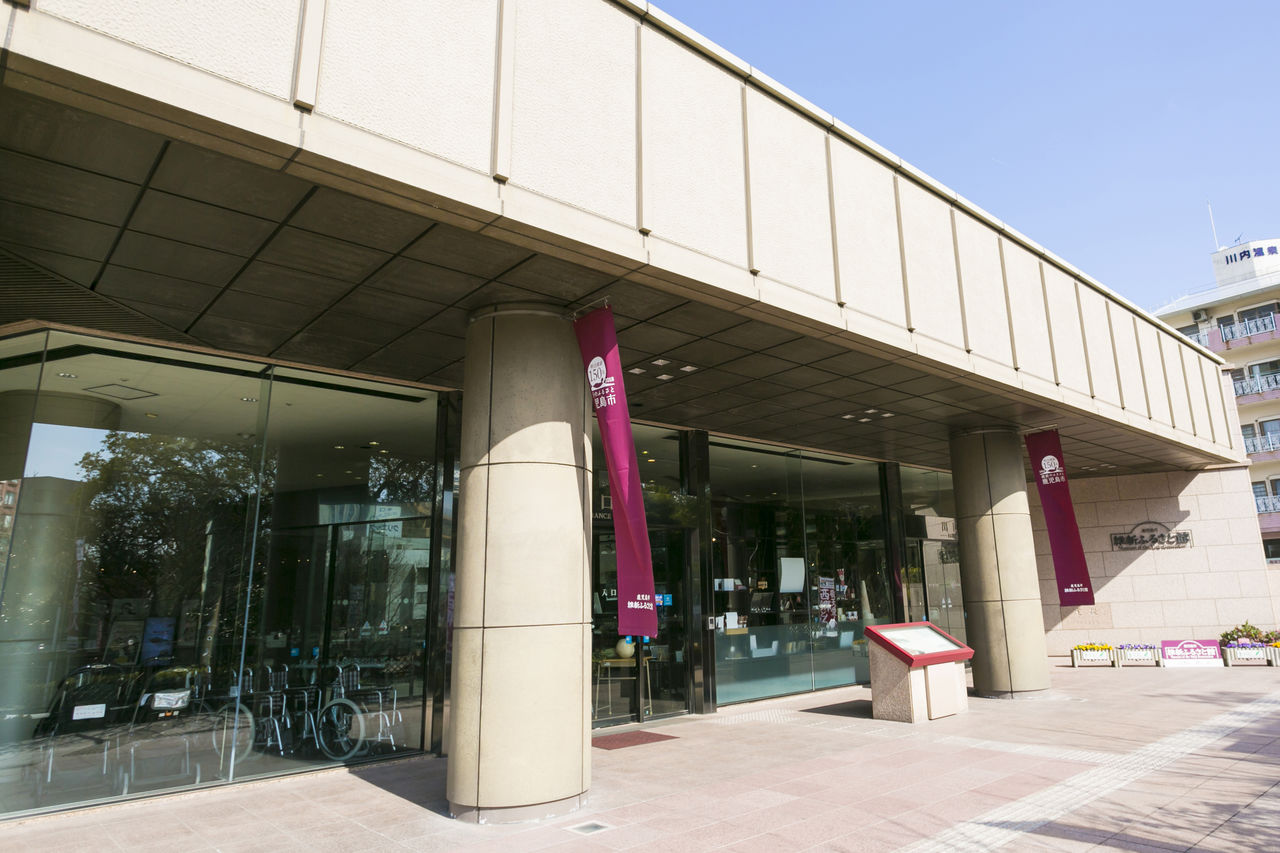 The entrance to the Museum of the Meiji Restoration.

The museum also has an area that uses a game format to present the pastimes that Saigō enjoyed in his childhood and youth, such as swimming in the river or sumō wrestling with his friends, playing cards, and learning the traditional school of swordsmanship that originated in Satsuma. 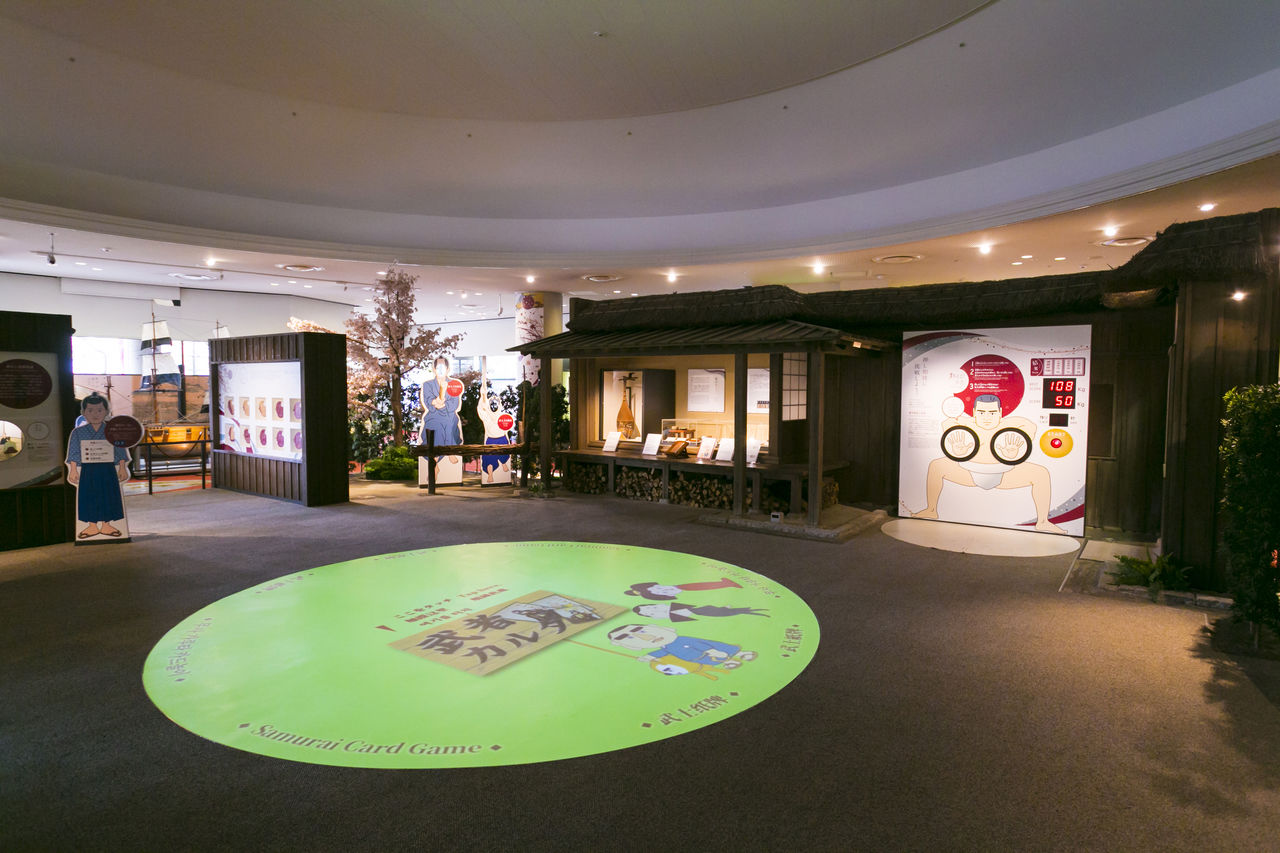 The museum includes an area where kids and adults alike can experience the pastimes Saigō enjoyed in his childhood and youth. 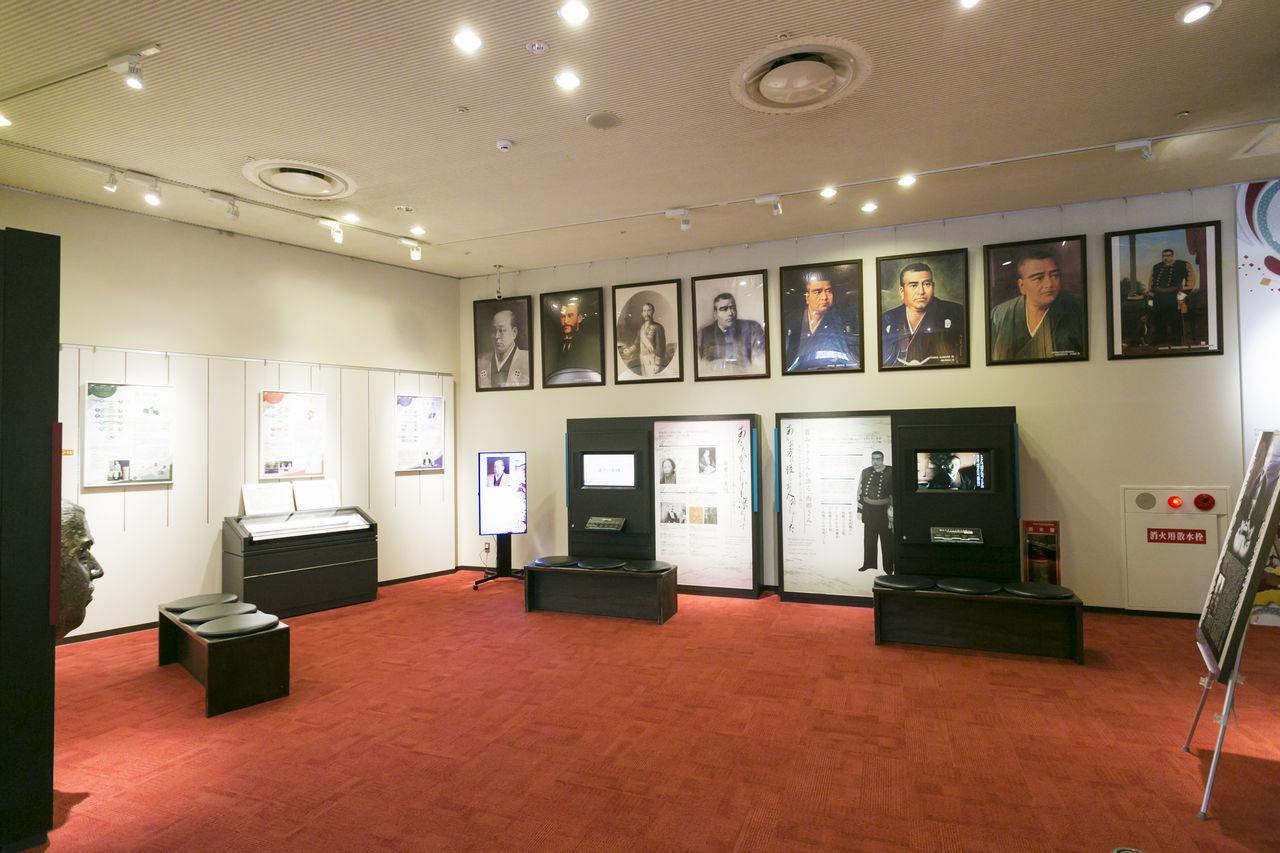 The section of the museum presenting the history and achievements of the great historical leaders of the Meiji Restoration.

The centerpiece of the museum is the “Experience the Restoration Hall,” featuring realistic robots and film presentations. Two short dramatic films are shown here—“The Road to the Restoration,” explaining the history from the late Tokugawa period up to the creation of the Meiji state, and “Satsuma Students Head West,” depicting the story of students from Satsuma sent to Britain to pursue their studies. Both films are a must-see, giving museum visitors the sense of being right in the middle of the historical action. 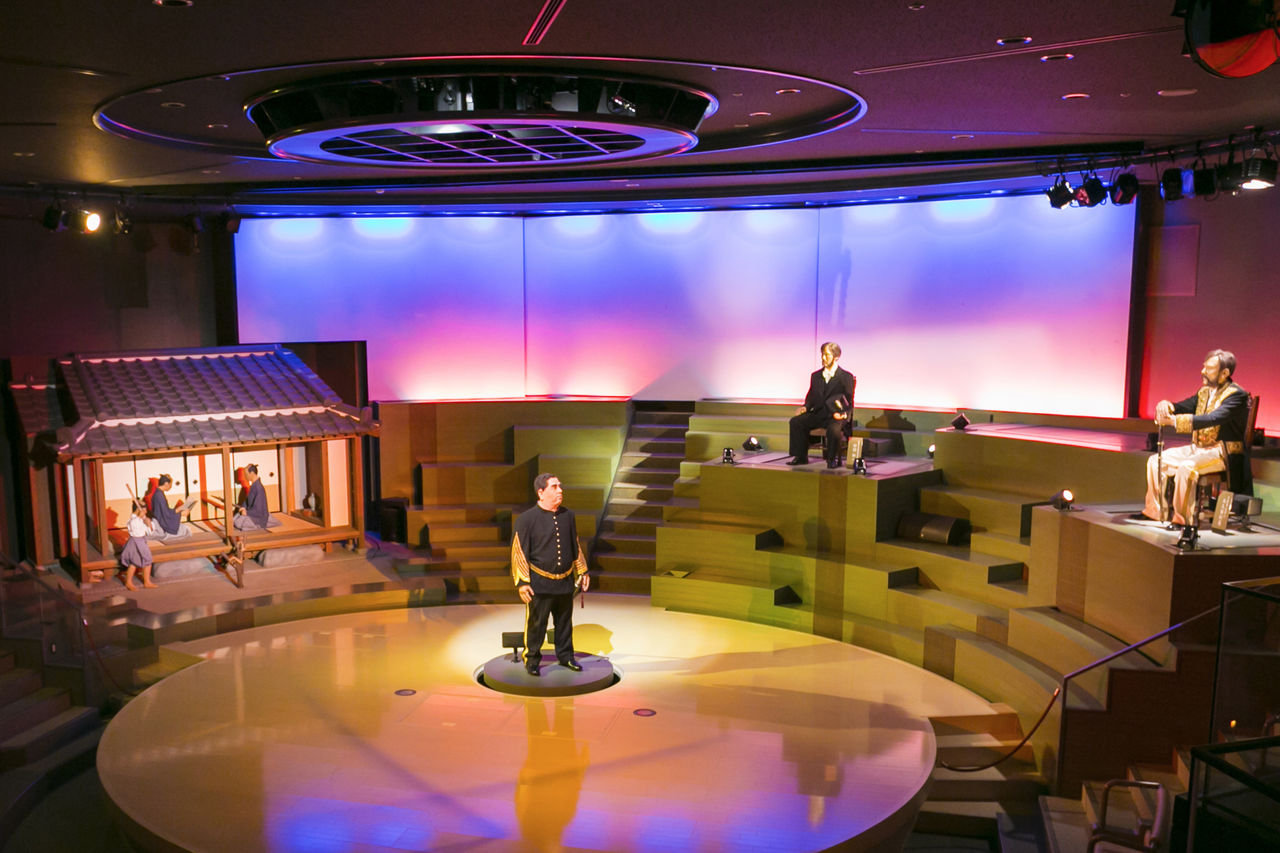 Realistic robots depict historical figures of the Meiji Restoration in the museum’s diorama.

Museum of the Meiji Restoration

Shiroyama, a 107-meter hill in the heart of the city of Kagoshima, is where the final, decisive battle was fought in the Satsuma Rebellion that broke out in 1877, pitting the Satsuma forces led by Saigō against the Imperial Army of the central government. Today the area is a much-loved park where city residents can relax and enjoy themselves. 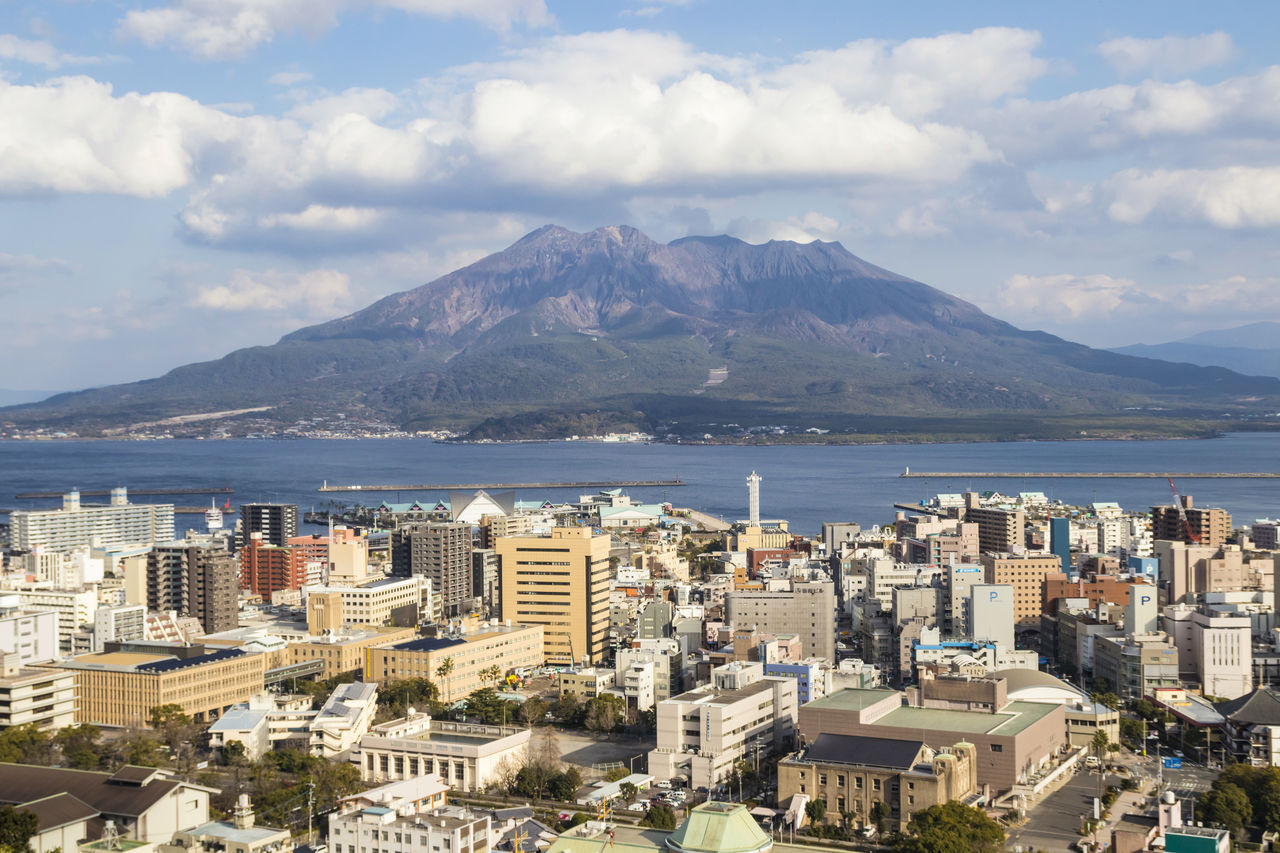 The view from Shiroyama takes in the city, Kagoshima Bay, and the Sakurajima volcano in the distance.

Halfway up the hill, in a quiet spot, is the small cave where Saigō Takamori is said to have spent the final five days of his life, after his forces were driven back by the Imperial Army forces. Saigō was shot and wounded as he left the cave and later committed suicide. 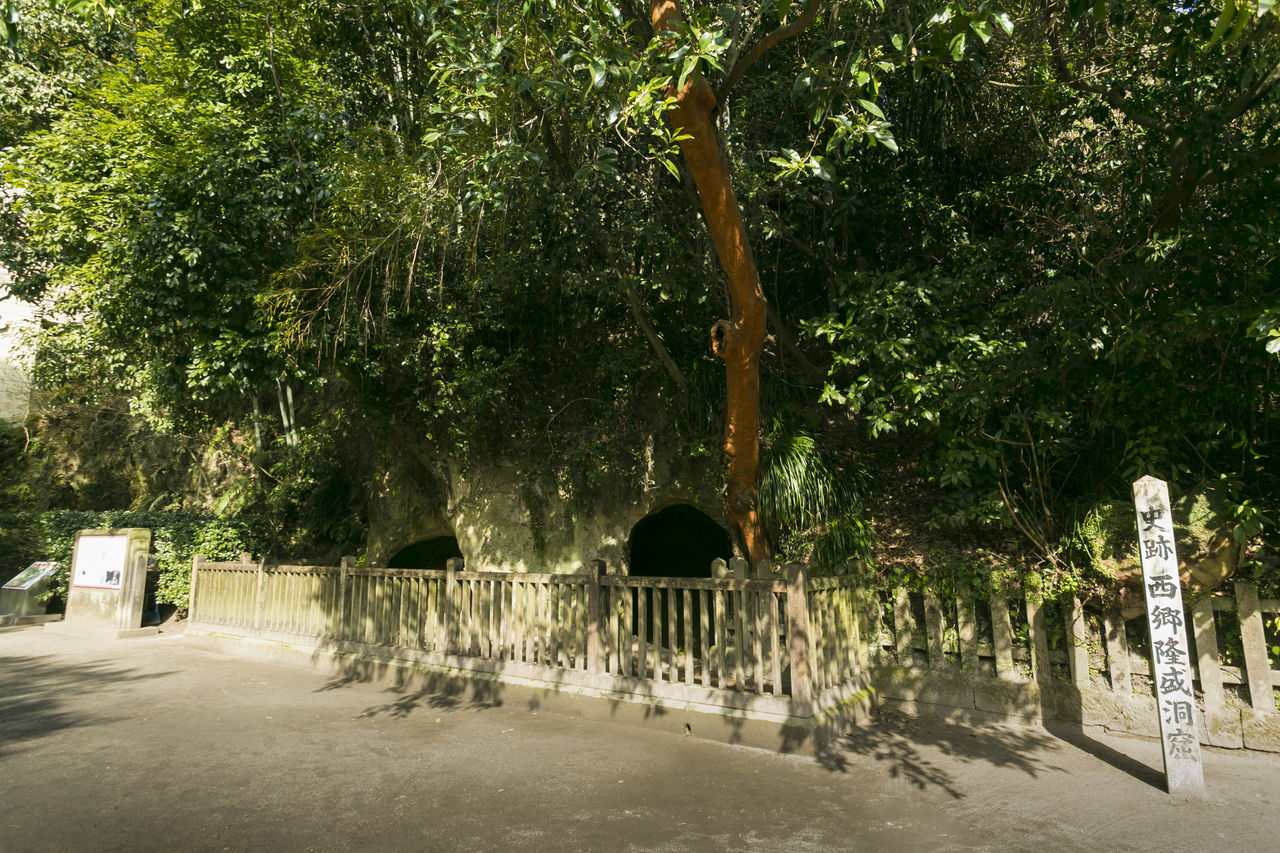 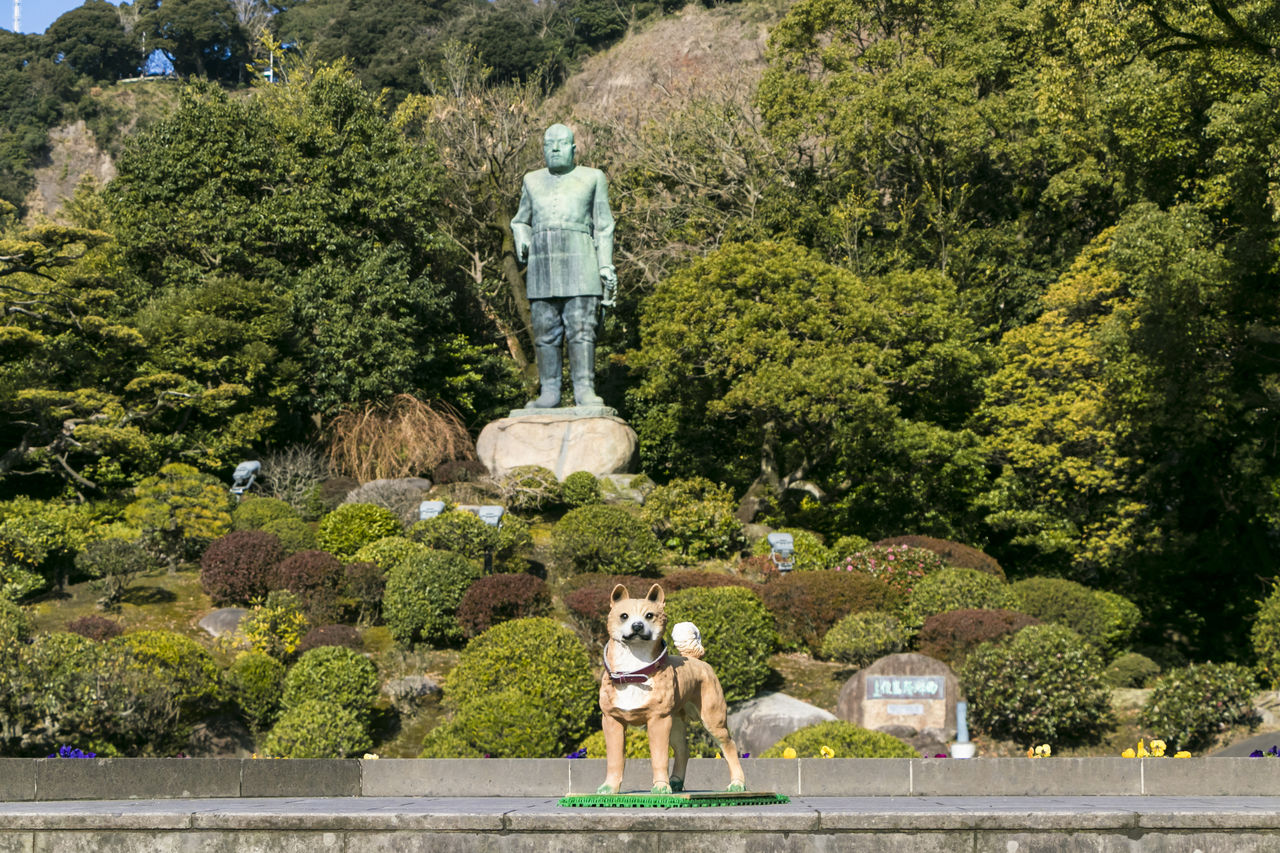 A statue of Saigō stands at the base of Shiroyama, accompanied by a small dog built to resemble his beloved pet.

About 10 minutes by car from Shiroyama is the Saigō Nanshū Memorial Museum, built in 1978 by the Kagoshima municipal government as part of the commemorations of the 100th anniversary of Saigō’s death. Nanshū was the pen name that Saigō used. The museum’s attractions include a diorama and videos depicting Saigo’s life and achievements. 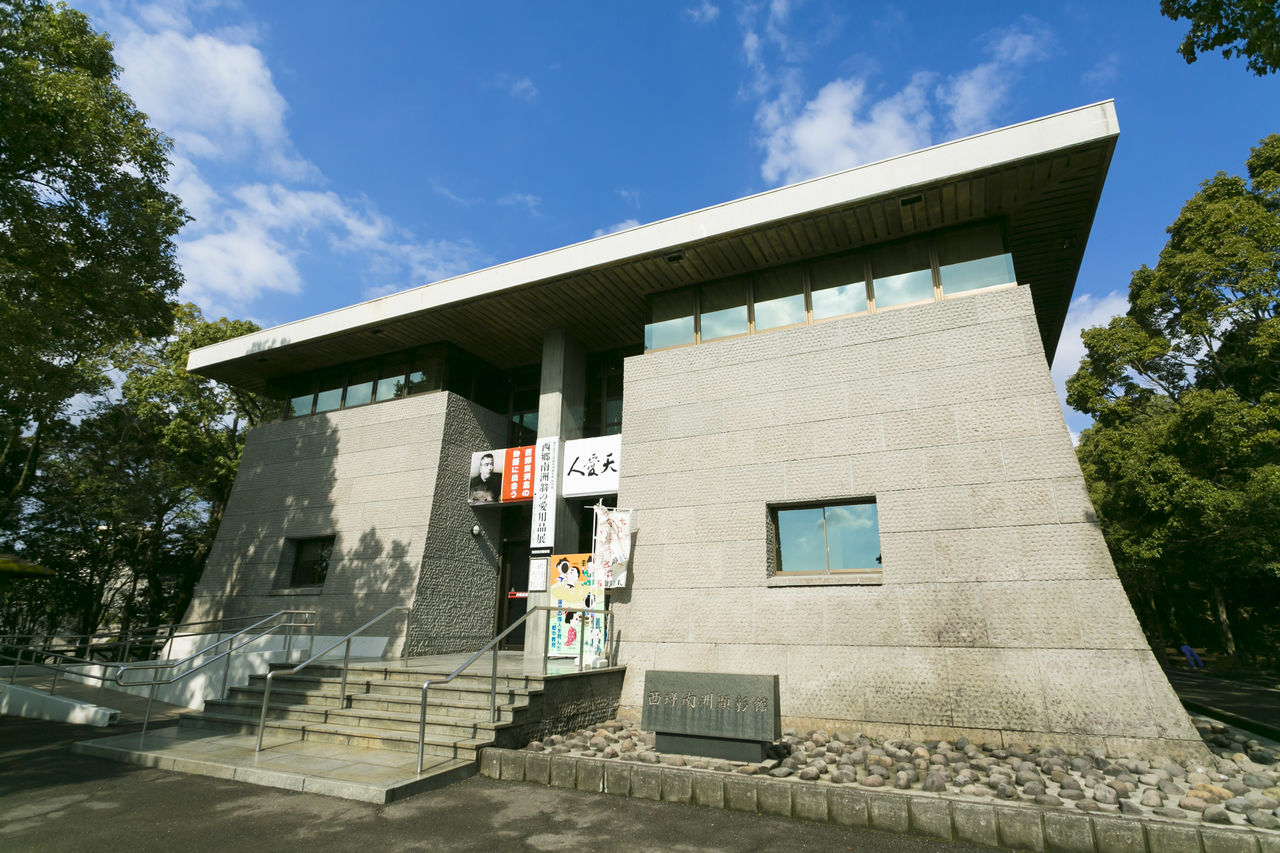 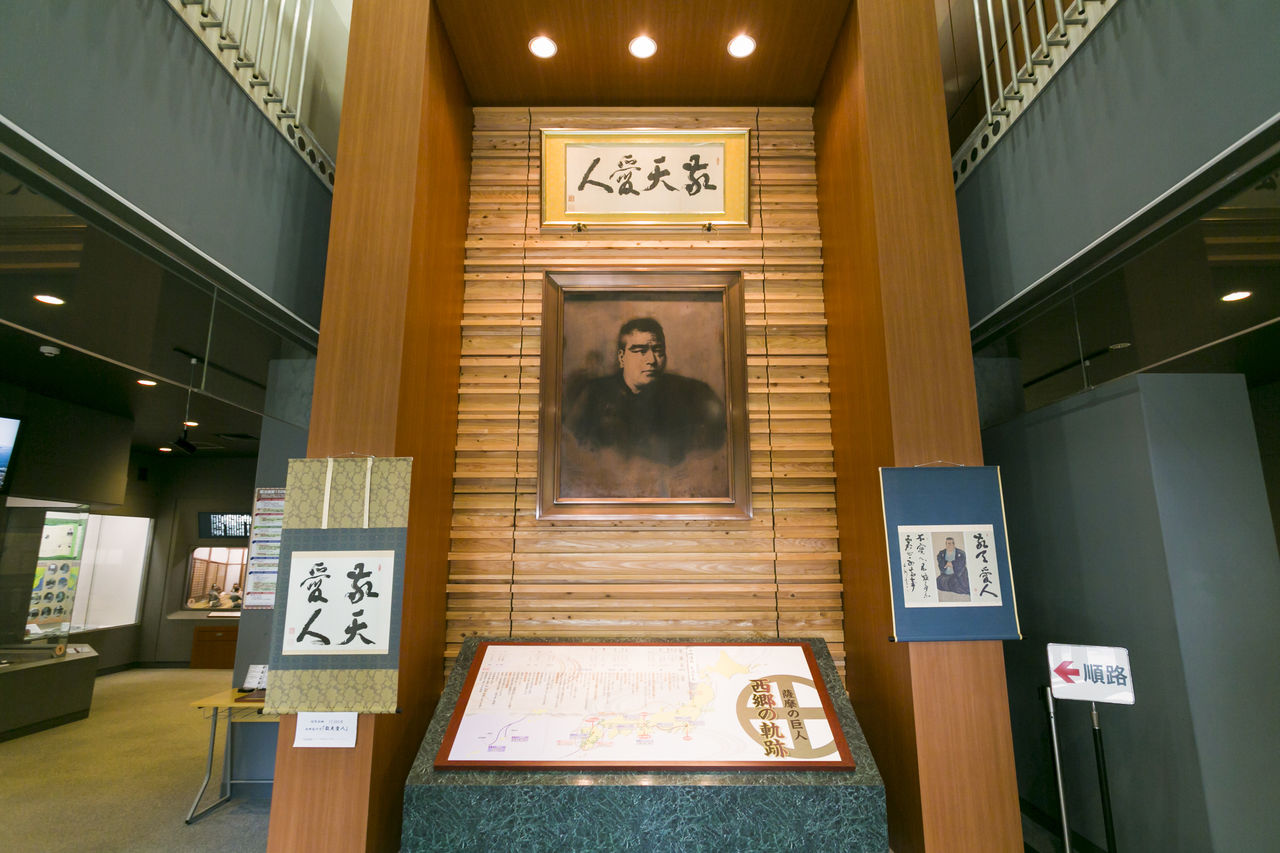 Upon entering the museum, visitors immediately encounter a portrait of Saigō.

The museum collection includes Saigo’s works of calligraphy, personal letters, items of clothing, and materials related to the Satsuma Rebellion. Particularly coveted among the museum’s items is his calligraphy of the four Chinese characters 敬天愛人 (keiten aijin), literally meaning “respect heaven, love people.” This was Saigō’s favorite motto, which he often wrote out in calligraphy. The expression clearly reflects the distinctive approach to life of this son of Kyūshū, known for his sincere interaction with and capacity to help people as well as his unwavering loyalty to friends. 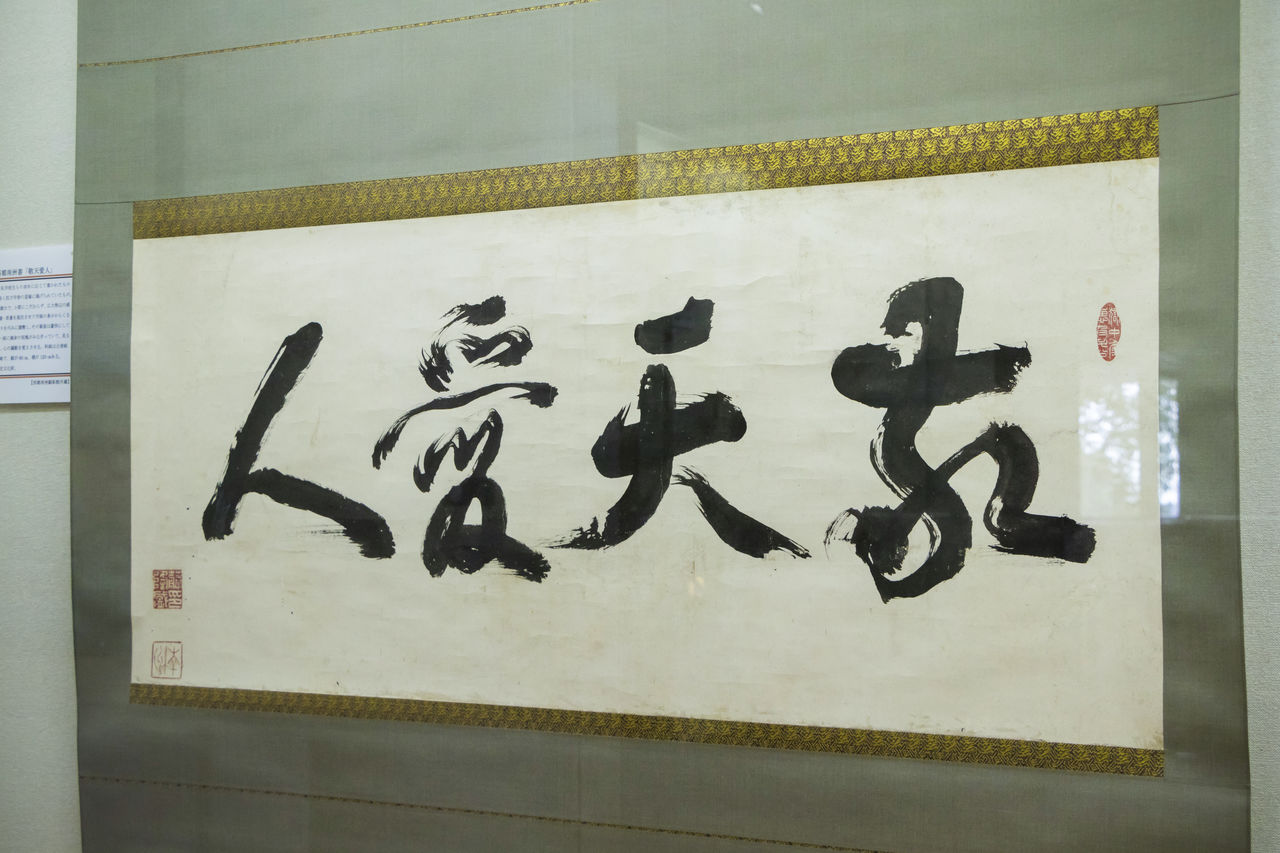 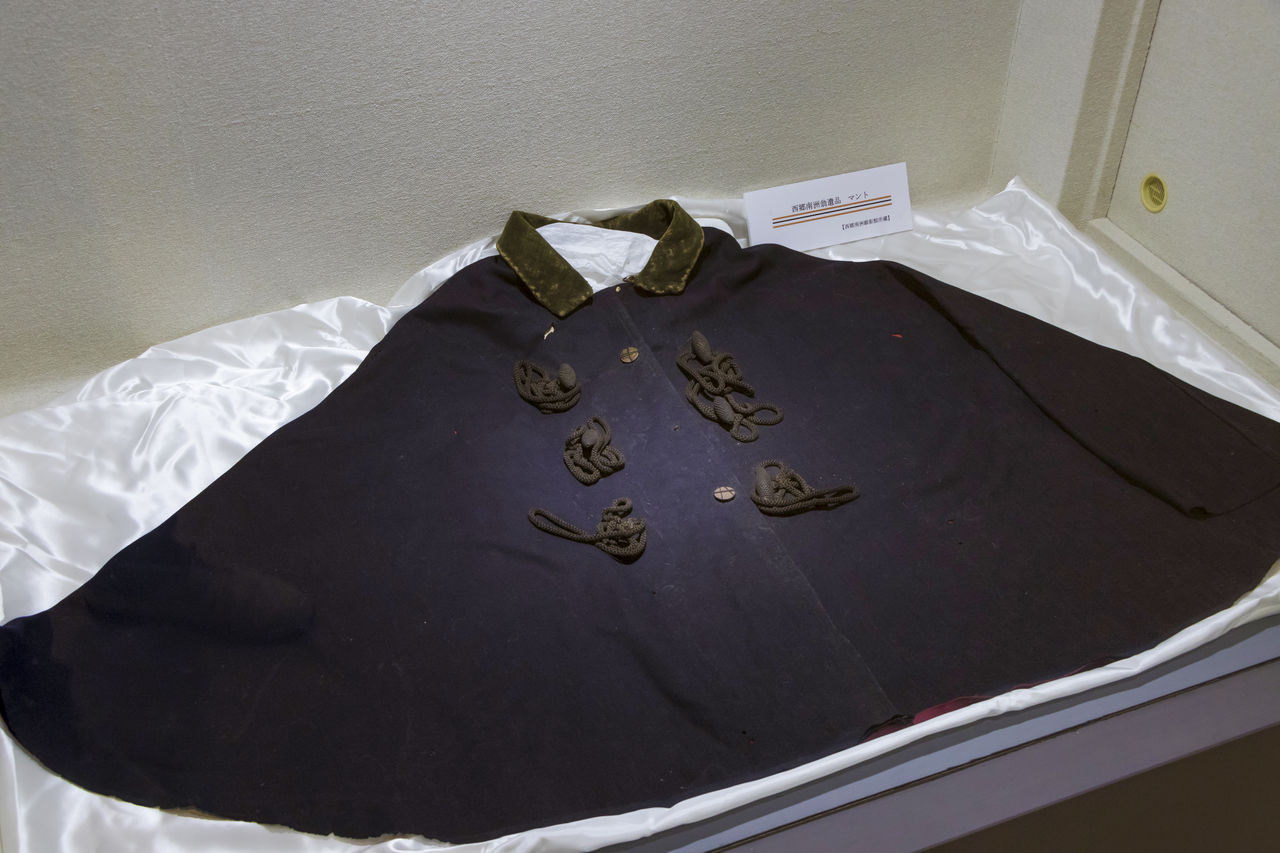 The collection at the Saigō Nanshū Memorial Museum includes rare items like cloak that Saigō wore while serving as a general in the Imperial Army. 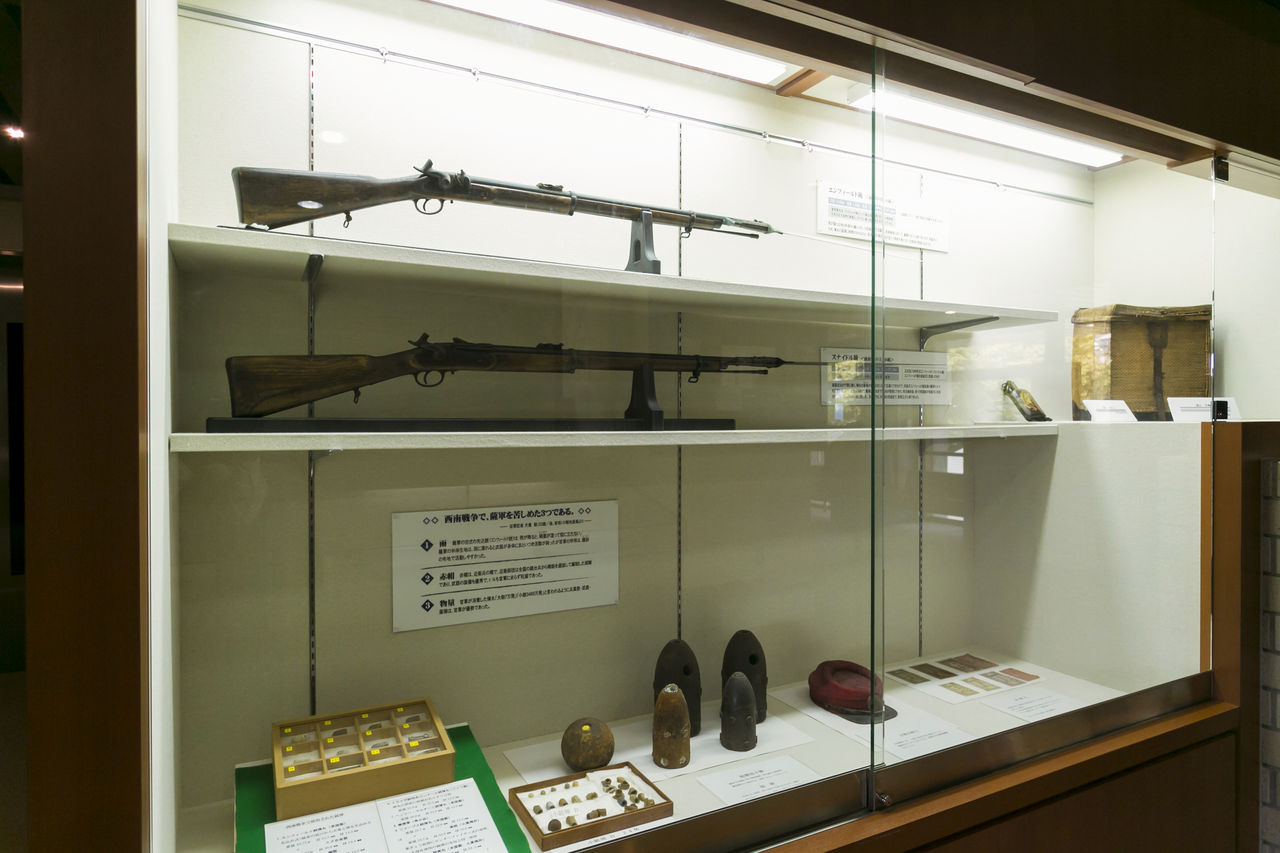 The historical materials on display include weapons used by the rebel forces and the Imperial Army during the Satsuma Rebellion.

On the same site as the Saigō Nanshū Memorial Museum is the Nanshū Cemetery, where the remains of Saigō and 2,023 of his comrades who died in the Satsuma Rebellion are buried. People still flock to the cemetery to pay their respects to Saigō’s memory, reflecting the deep-rooted love that he has inspired among people in the local area and throughout Japan. 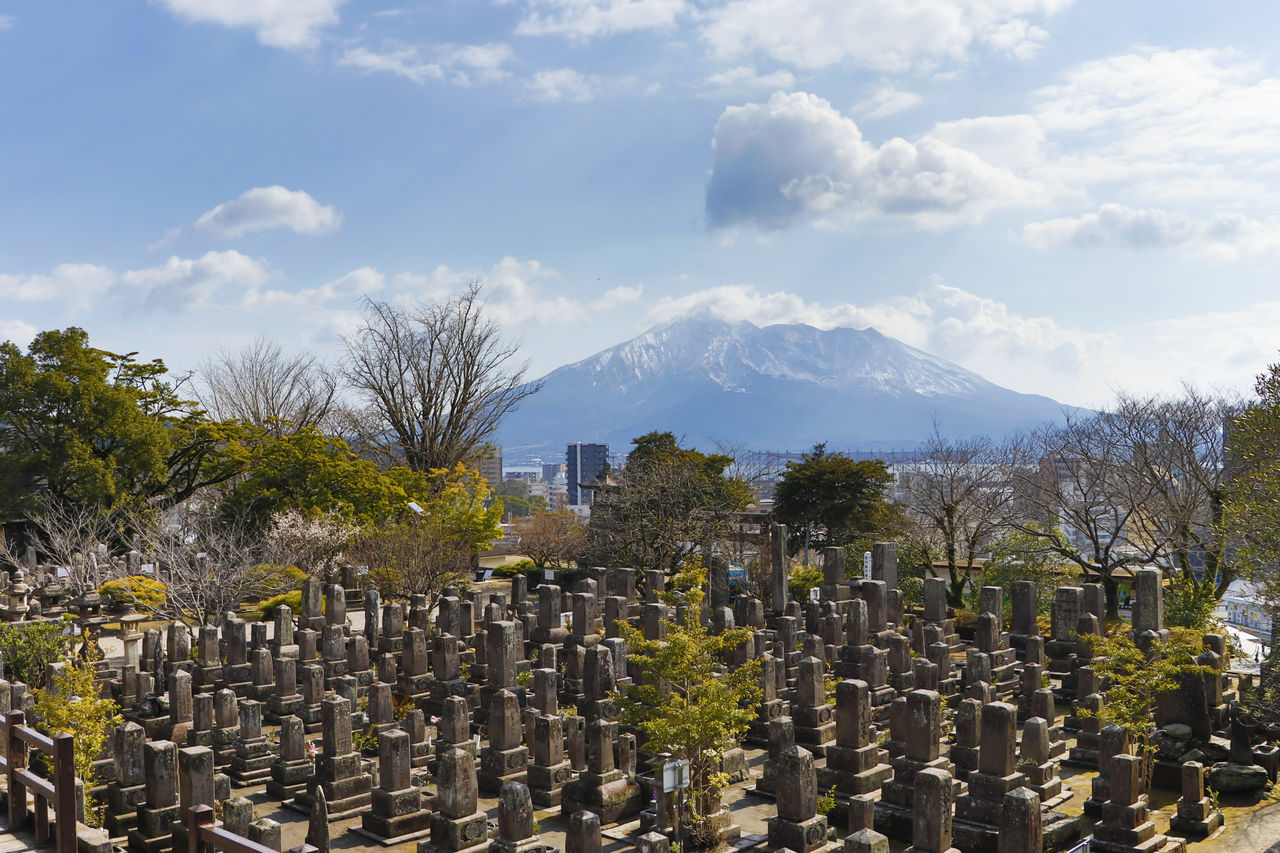 Sakurajima rises up in the background behind the Nanshū Cemetery. 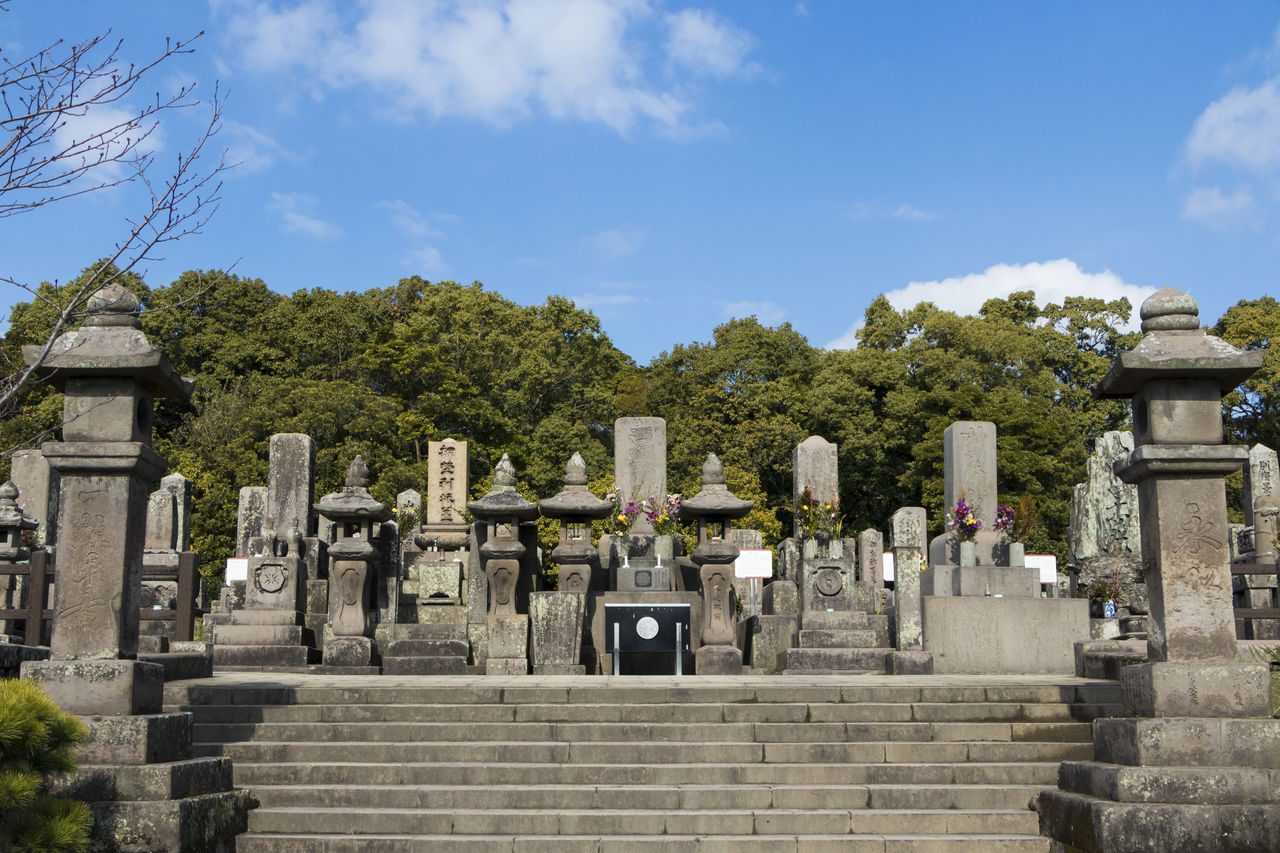 (Originally written in Japanese by Satō Fumi; photographs by Kusano Seichirō. Banner photo: Saigō stands watch over his hometown in statue form at the base of Shiroyama.)