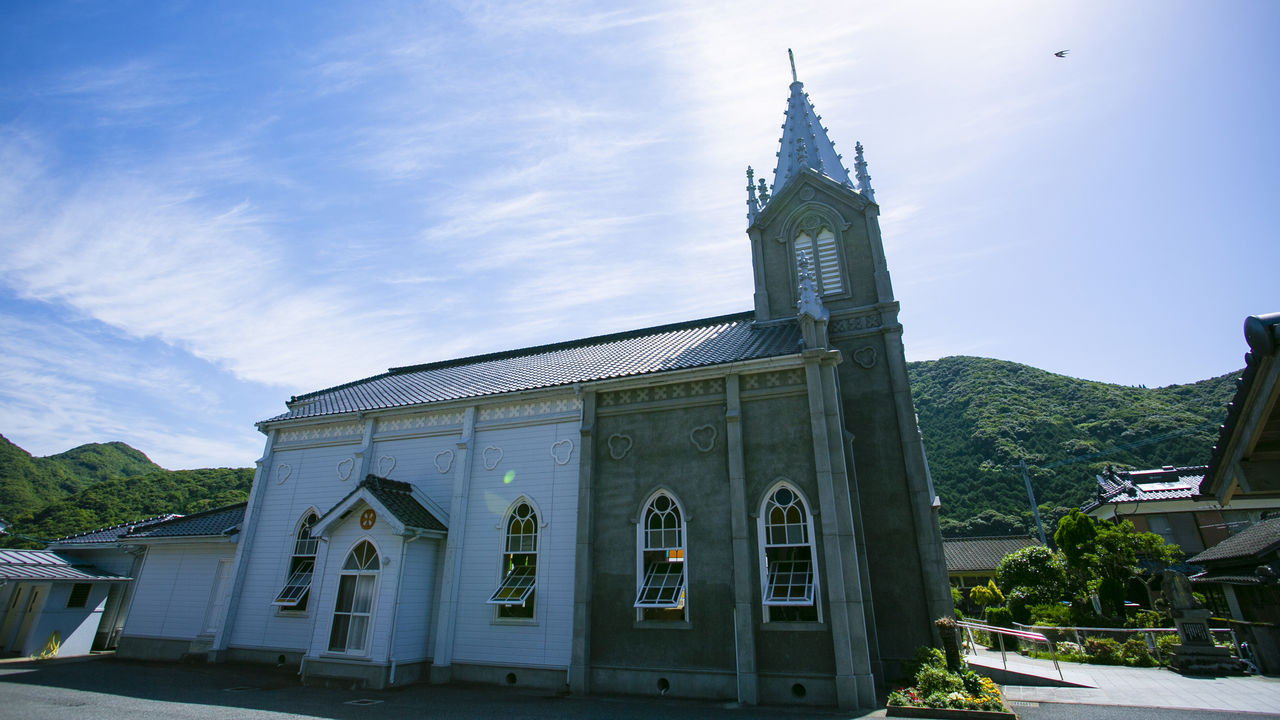 Jul 31, 2018
In July 2018, Sakitsu, a fishing community in Kumamoto Prefecture, was registered on the UNESCO World Heritage list as one of the sites included in the Hidden Christian Sites in the Nagasaki Region. The bid for registration was originally submitted as “Churches and Christian Sites in Nagasaki,” but residents were overjoyed at the addition of their region to the designation. Yasuda Kimihiro, former mayor of Amakusa, the city home to Sakitsu, discussed the process leading up to registration.

The History of Japan’s Hidden Christians

Despite the strict prohibition against Christianity implemented early in the seventeenth century, hidden Christians continued practicing their faith in secret. The Hidden Christian Sites in the Nagasaki Region trace the history of those faithful, who developed distinctive religious practices that coexisted with Japan’s traditional religions of Shintō and Buddhism and local social practices. They preserved their Catholic faith for centuries in a manner unprecedented elsewhere in the world. Out of the 12 sites included in the designation, only Sakitsu is in Kumamoto Prefecture. 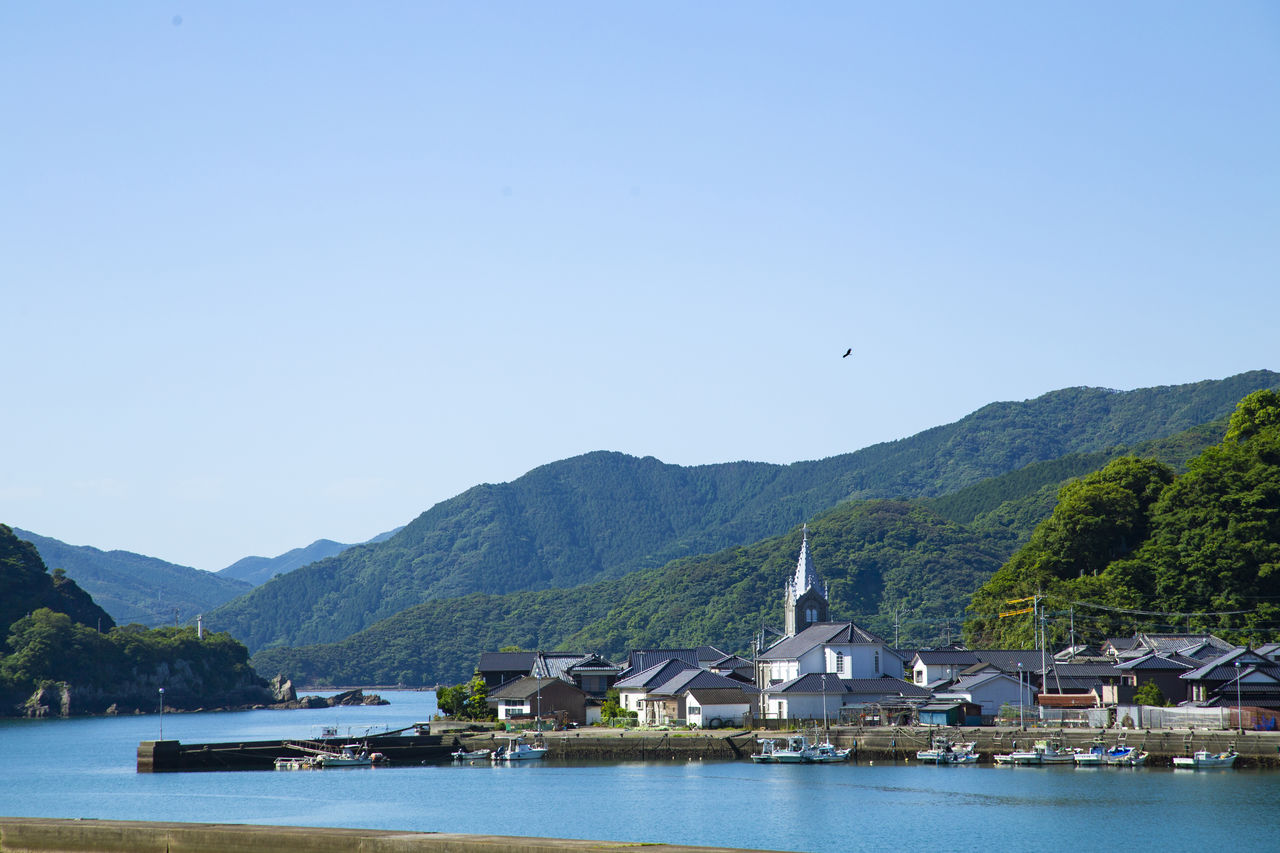 The hamlet of Sakitsu, on the edge of placid Yōkaku Bay, exudes a calming atmosphere.

In May 2018, ICOMOS, UNESCO’s advisory body, recommended inclusion of the Hidden Christian Sites in the Nagasaki Region on the World Heritage list. Yasuda Kimihiro, former mayor of Amakusa, the city where Sakitsu is found today, recalled that his reaction to the news was joy that at long last, the significance of the region would be recognized throughout the world. It had certainly been a long 11 years since talk of recognizing the region had first begun in 2007.

The original bid had been registered under the different name of “Churches and Christian Sites in Nagasaki,” but following the ICOMOS opinion that there should be more emphasis on the distinctive nature of the region’s secret practice of Christianity, the Japanese government withdrew its application. Understandably, when the region’s significance was finally recognized, the decision was greeted with jubilation. 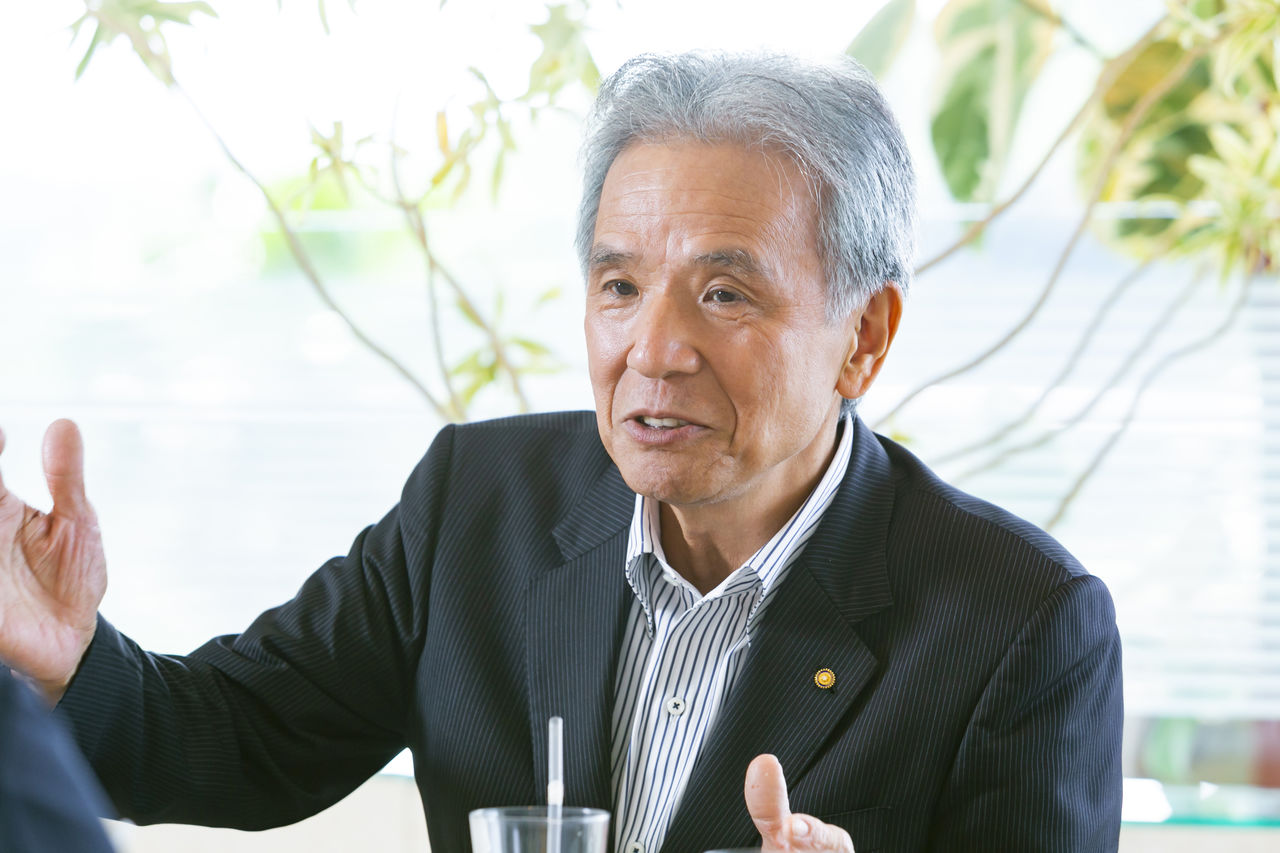 Yasuda Kimihiro became mayor of the city of Hondo in 2000. Following amalgamation with surrounding districts to create the city of Amakusa in 2006, he became the first mayor of that new municipality, a post he held until 2014.

According to Yasuda, when talk of registering the area’s cultural assets as a World Heritage site initially surfaced in 2007, the focus was mainly on churches in Nagasaki Prefecture; less attention was paid to similarly relevant sites in Amakusa. Although local government and tourism industry officials expressed hopes that World Heritage registration would stimulate tourism in Amakusa, many Sakitsu residents were skeptical. It took house-to-house visits by the city’s history curators to convince them that pursuing a listing was worthwhile. 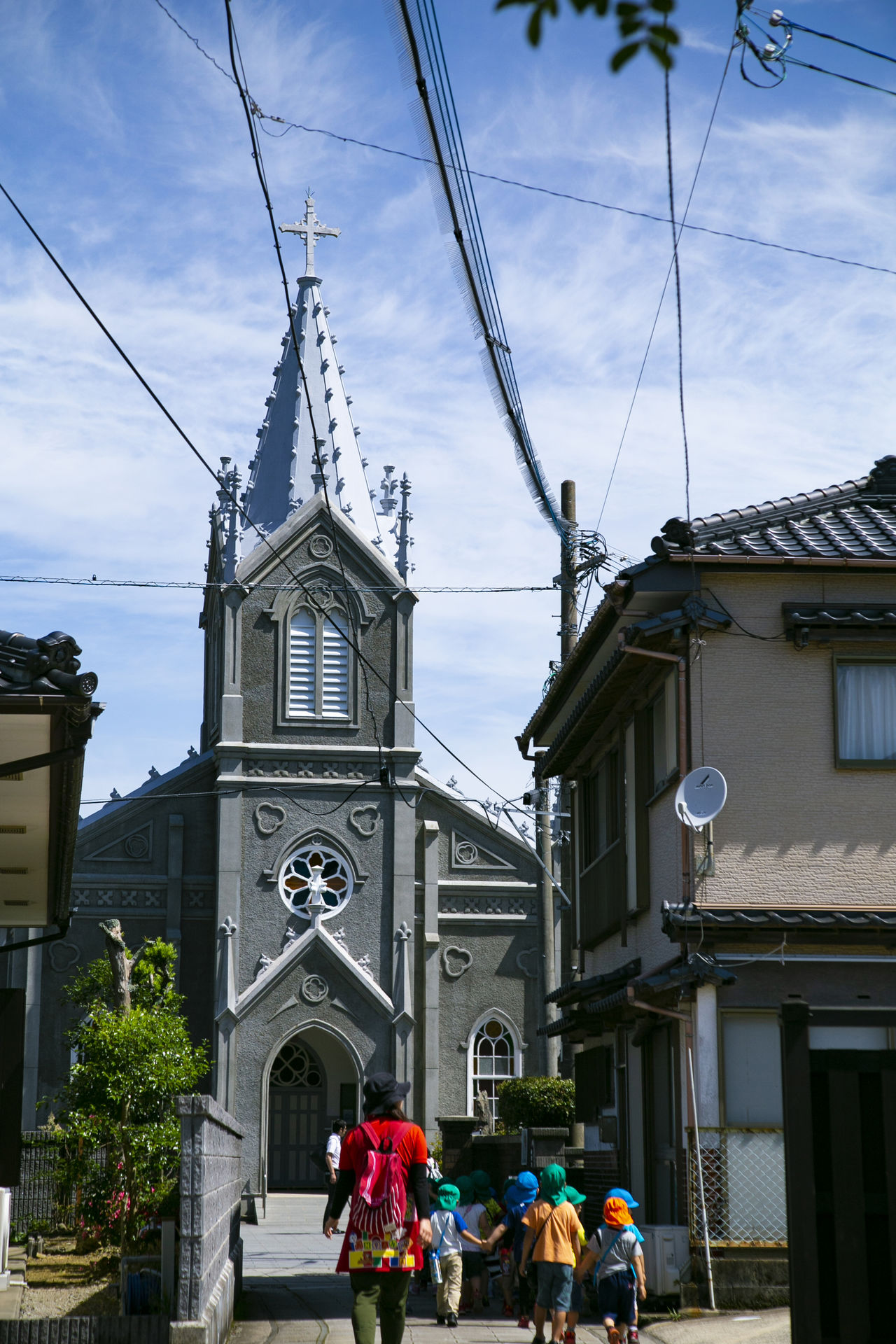 The Sakitsu Church is also called “the church of the sea.”

Another requirement for the UNESCO listing was that the site be designated a National Treasure or an Important Cultural Asset. Over the course of four years, Yasuda and others took the necessary steps, finally obtaining the designation of Important Cultural Asset of Scenic Beauty for Sakitsu in 2011. Their effort bore fruit in 2014 when Sakitsu was included among the sites registered as Hidden Christian Sites.

Continues Yasuda: “The distinctive religious practices nurtured in secret survive to this day in Sakitsu. I hope visitors will be able to learn about the ill-starred history of the hidden Christians as they explore the village.” Medallions made from silver-lip oysters and prayed to as representations of the Virgin Mary, along with other artifacts of the hidden Christians, can be seen in the Minatoya Sakitsu Museum located near the church. 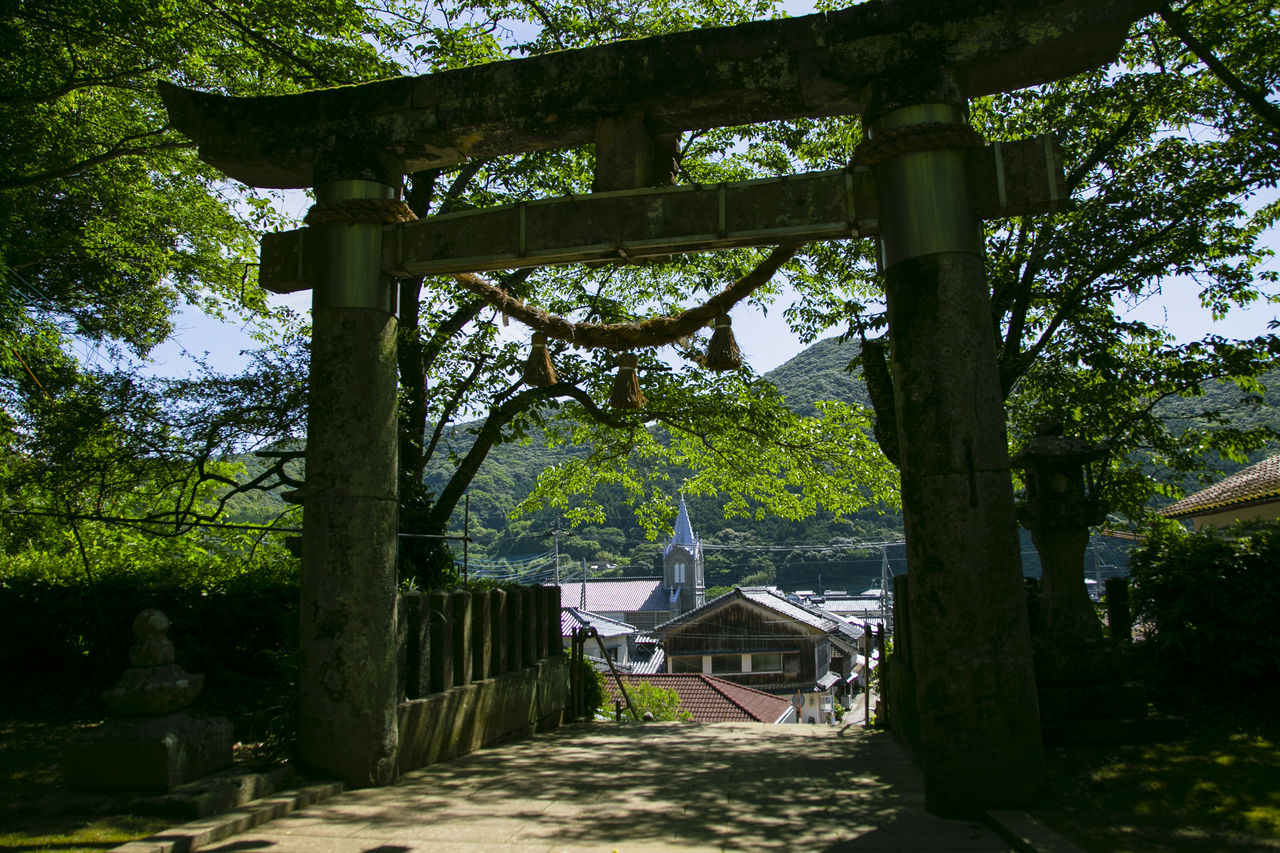 Given that ICOMOS recommended placing more emphasis on the uniqueness of the history of the hidden Christians, it was only natural that the name of Amakusa, with its history of secret religious practices carried out in Sakitsu, be added to the listing. Yasuda emphasizes, though: “The townscape and the artifacts aren’t the only things that make Sakitsu special. Visitors enjoy chatting with residents too; they have always been welcoming.” 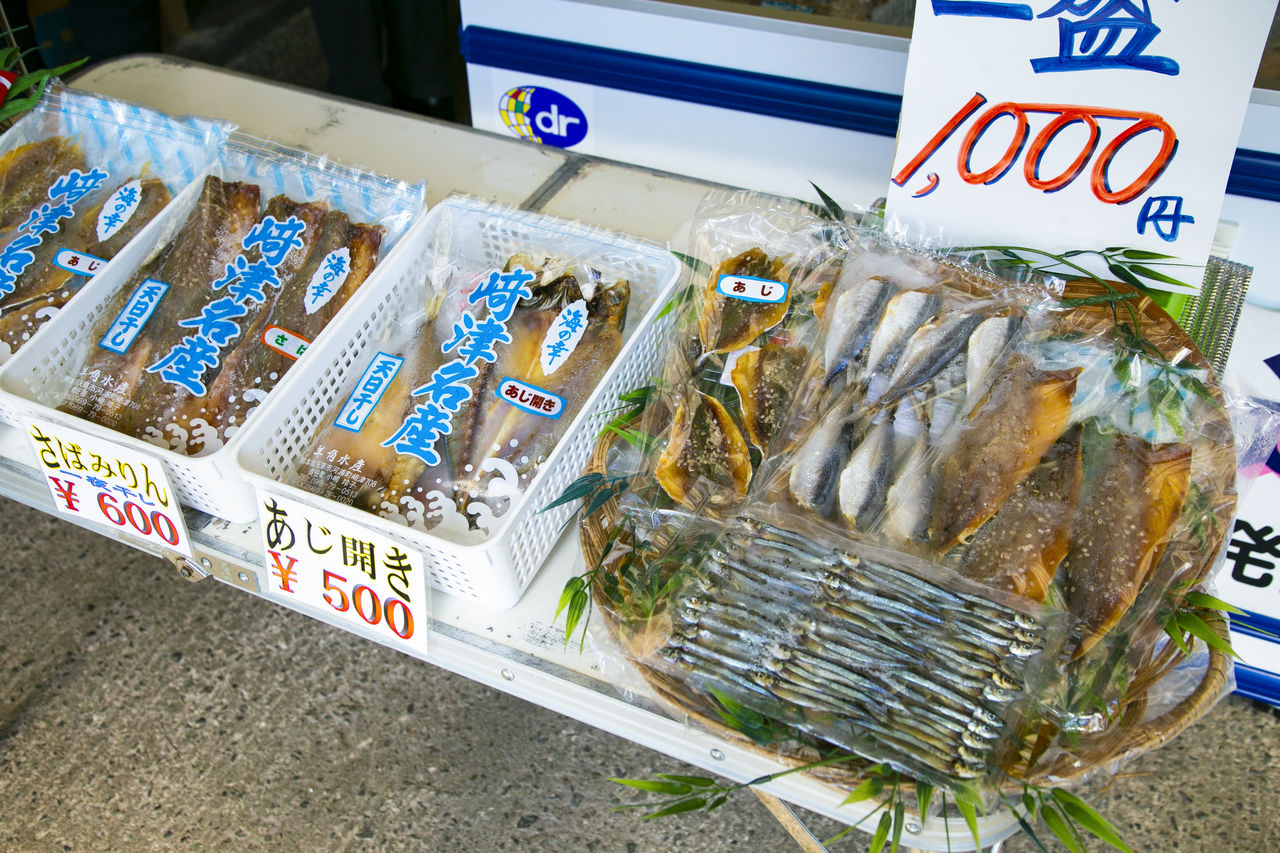 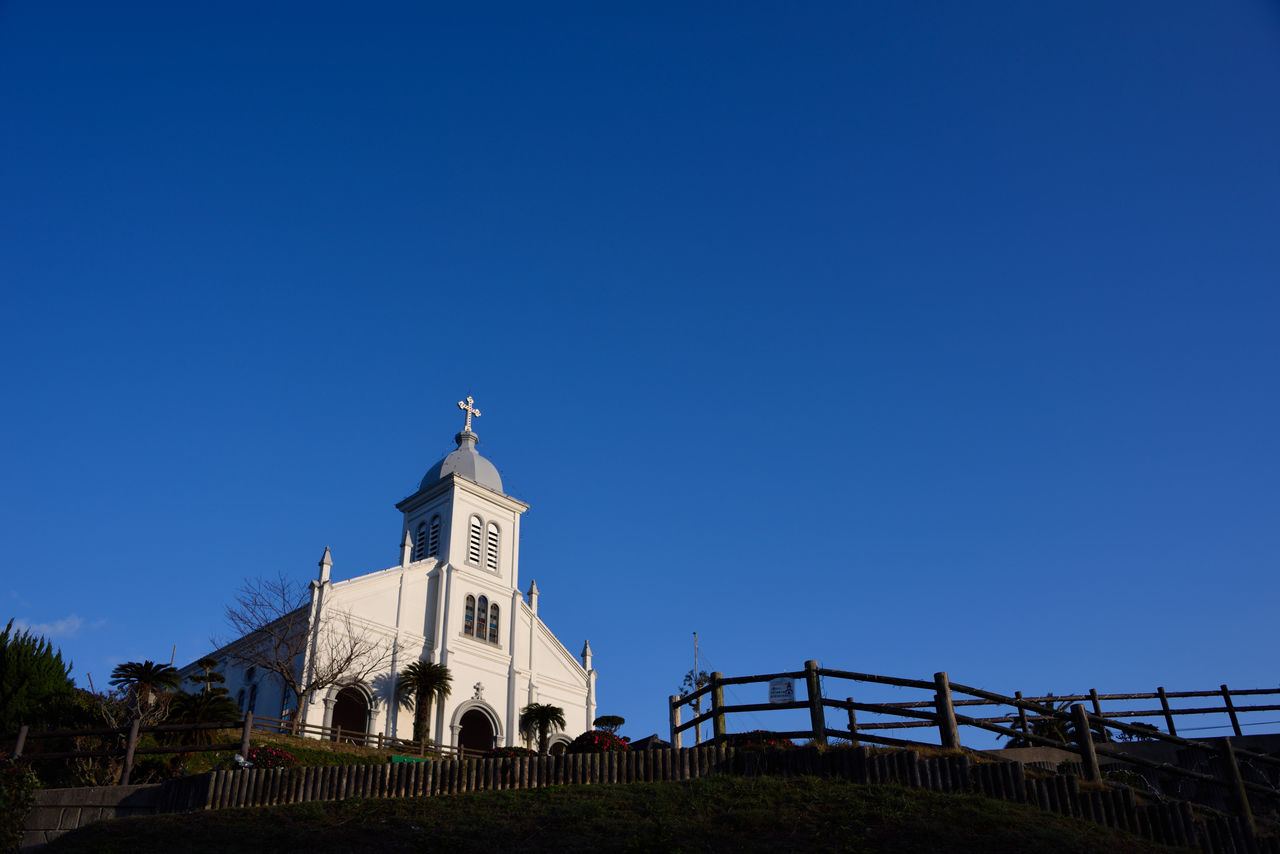 The white Ōe Church stands on a hill about 15 minutes by car from Sakitsu.

“It’s important to us that Amakusa made it into the listing,” says Yasuda, “because there are many other attractive sites here besides Sakitsu that we’d like people to know about.” The city is home to many other sites associated with hidden Christians. The Ōe Church was erected in 1933 by French missionary Frederic Louis Garnier, who provided funds, and local Christians. The Amakusa Christian Museum displays a collection of artifacts, while the Amakura Rosario Museum features a reconstruction of a hiding place used by hidden Christians during the period of persecution. There are also many sites in Amakusa associated with Amakusa Shirō, who was executed in his teens for leading the 1637–38 Shimabara Rebellion, an uprising of Christians against the shogunate. 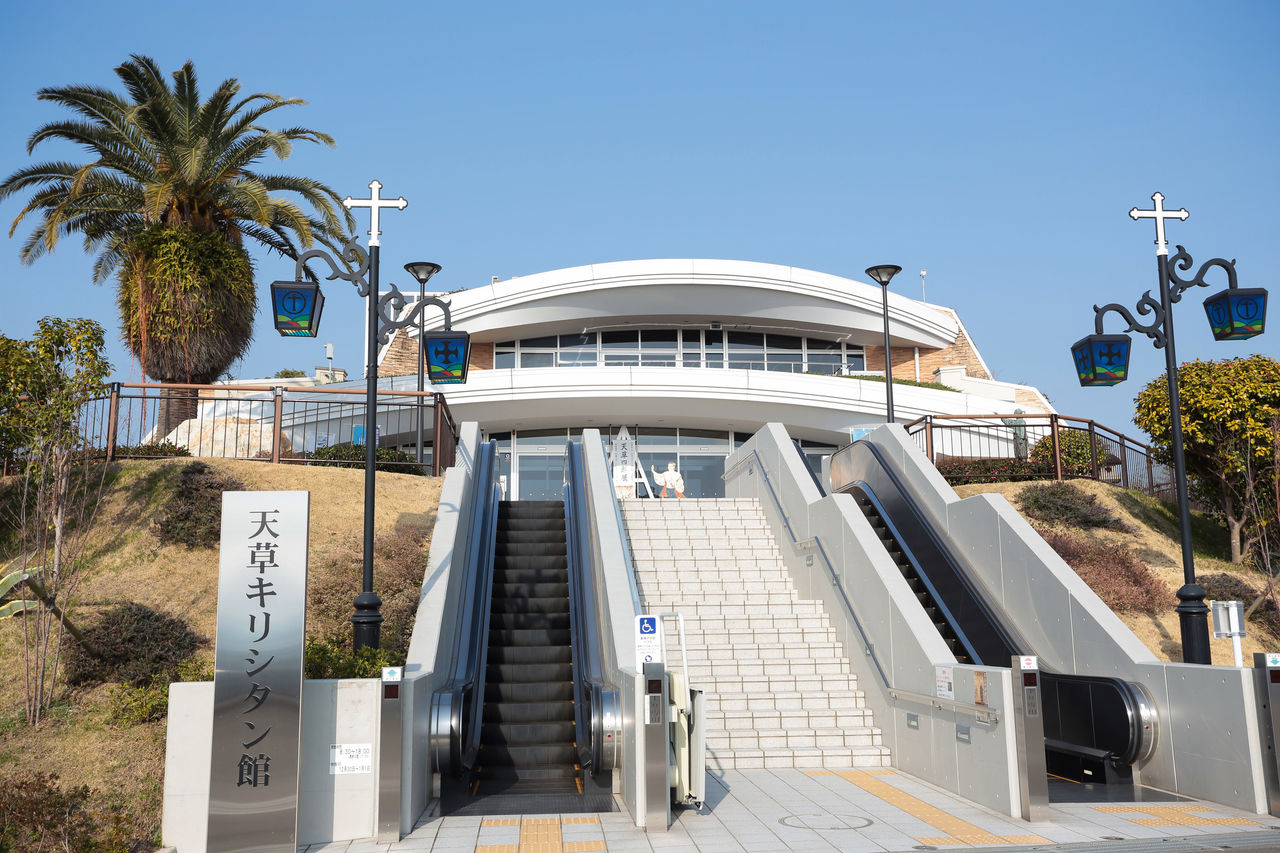 About 200 items on display are grouped into four zones at the Amakusa Christian Museum. 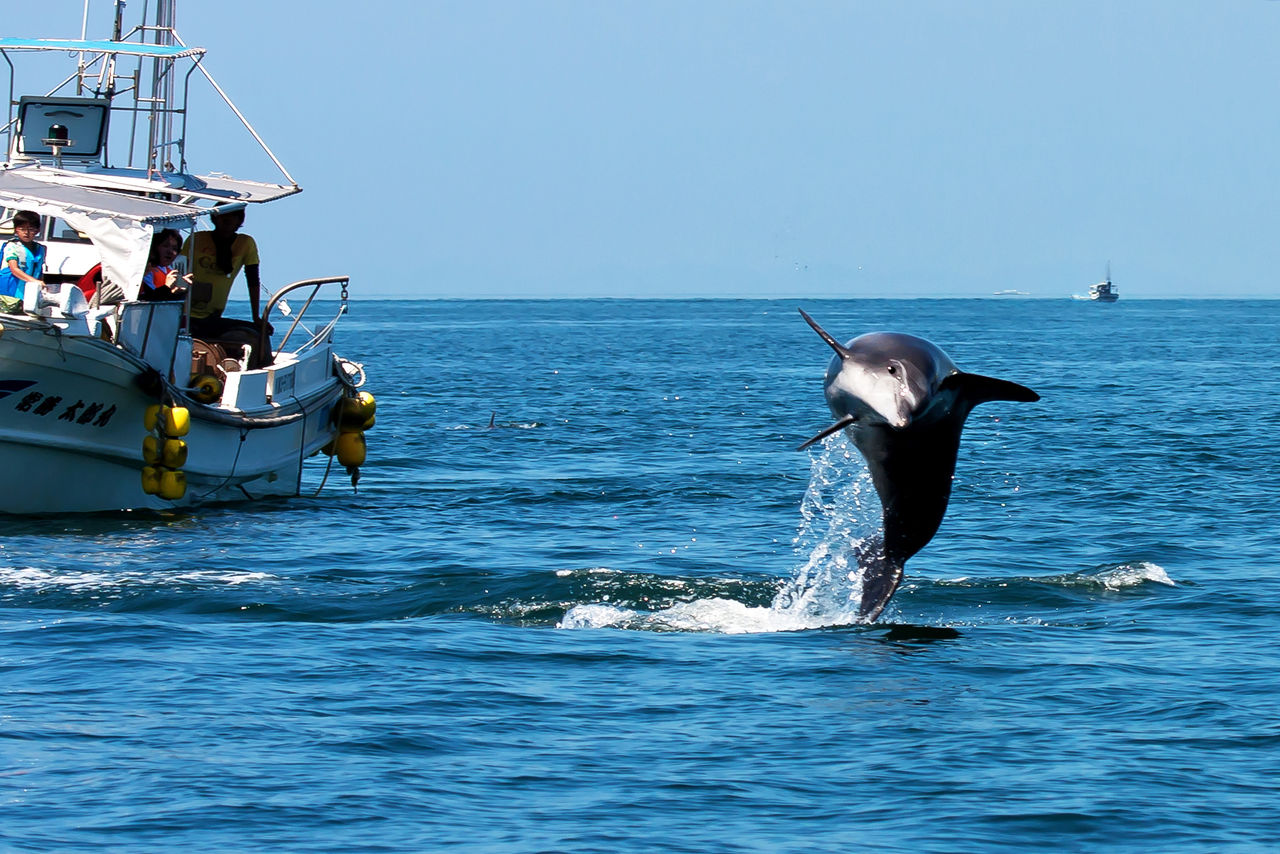 Leaping bottlenose dolphins are a common sight in the waters off Sakitsu.

Also present for the interview was Ikeda Shōzaburō, head of the Hondo Chamber of Commerce and Industry, who spoke proudly of the excellence of the local seafood, especially recommending sushi made from local fish. 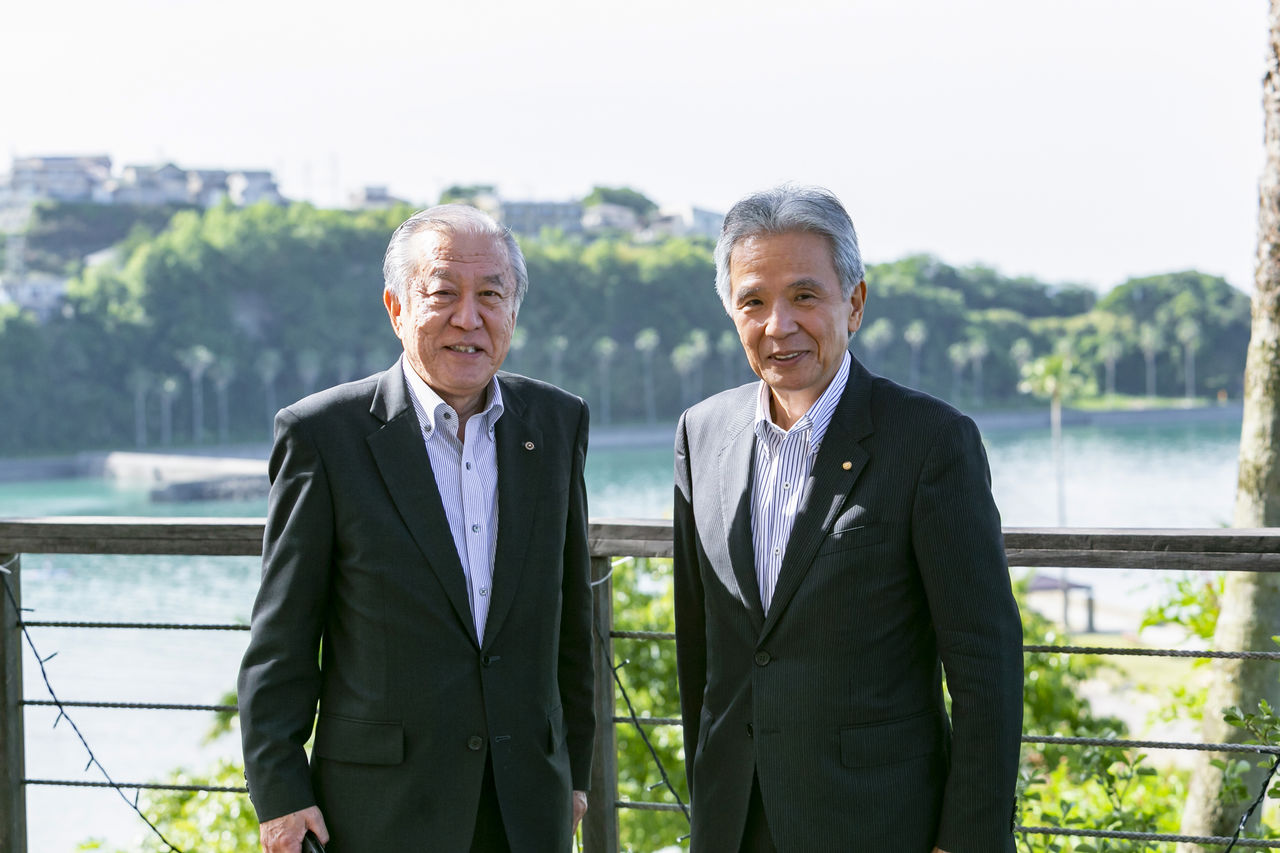 Yasuda Kimihiro with Ikeda Shōzaburō of the Hondo Chamber of Commerce and Industry. Together they worked to have Amakusa included as part of the World Heritage site listing.

Amakusa is surrounded by three bodies of water, the East China Sea, the Ariake Sea, and the Shiranui Sea, all rich fishing grounds. The beautiful shoreline and the sun setting over the water are just a few of the appealing sights in this area. And according to Yasuda, “the fact that dolphins live here is proof that fish are plentiful. I hope that visitors will board boats to go dolphin watching and see many of the 300 wild dolphins that live in the bay.” The two men hope that the registration of Sakitsu as a World Heritage site will attract many visitors to their city. 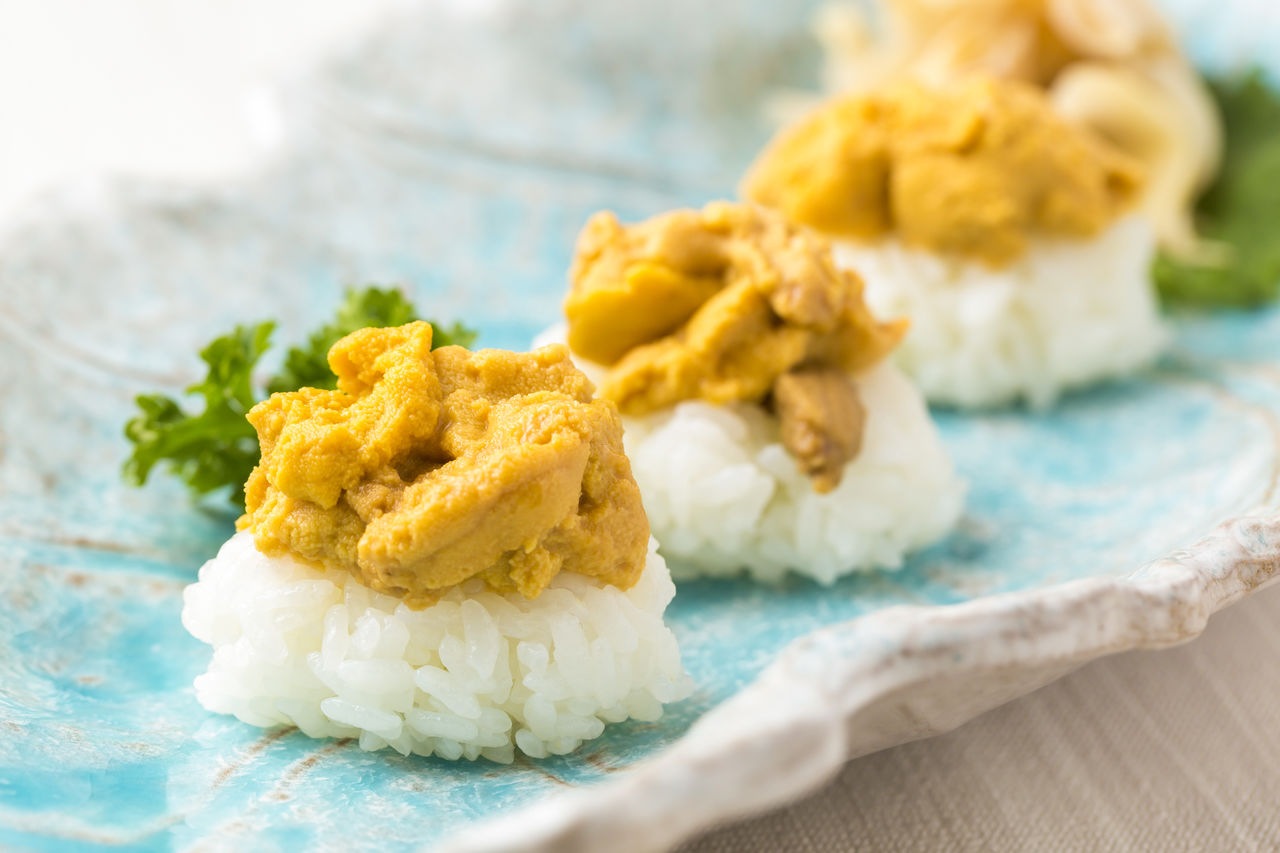 Sushi featuring the freshest of Amakusa seafood, including sea urchin and local fish. 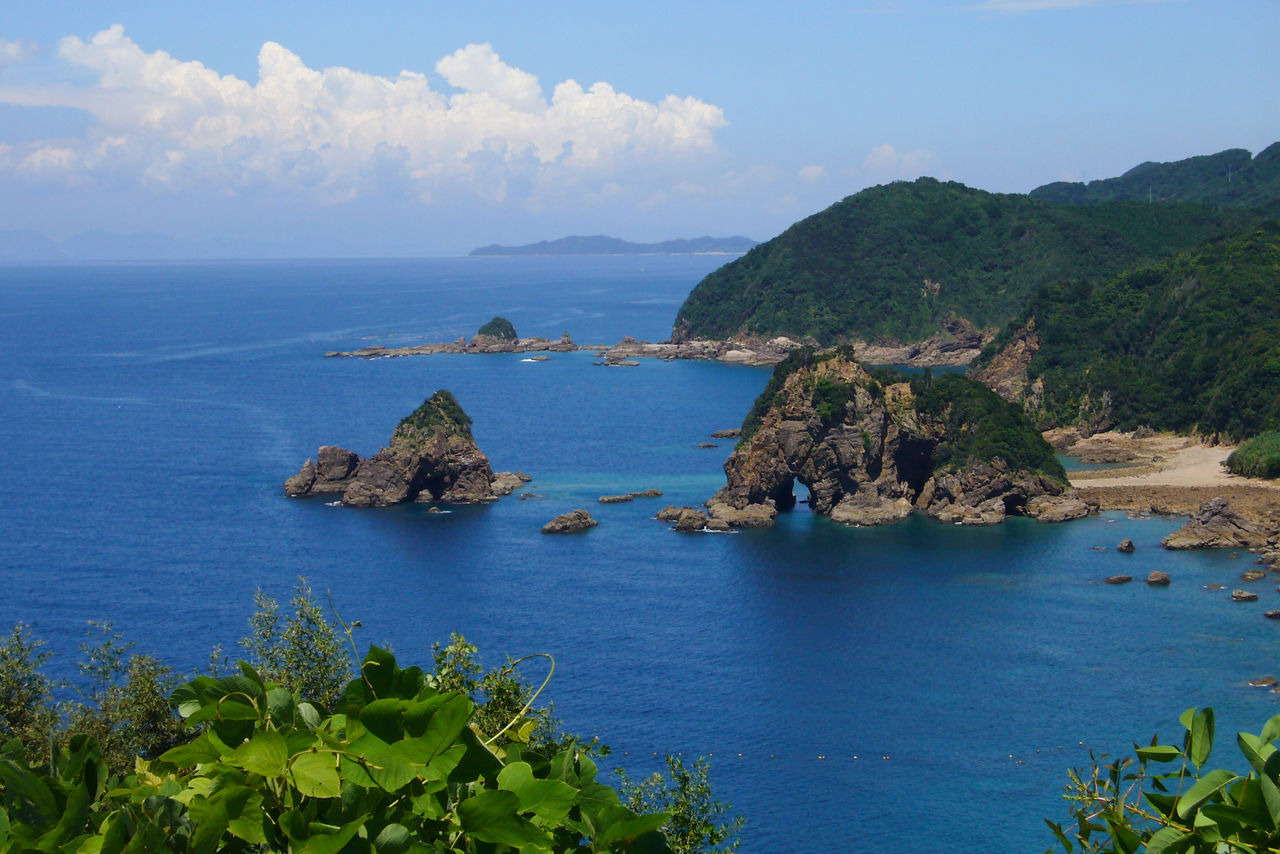