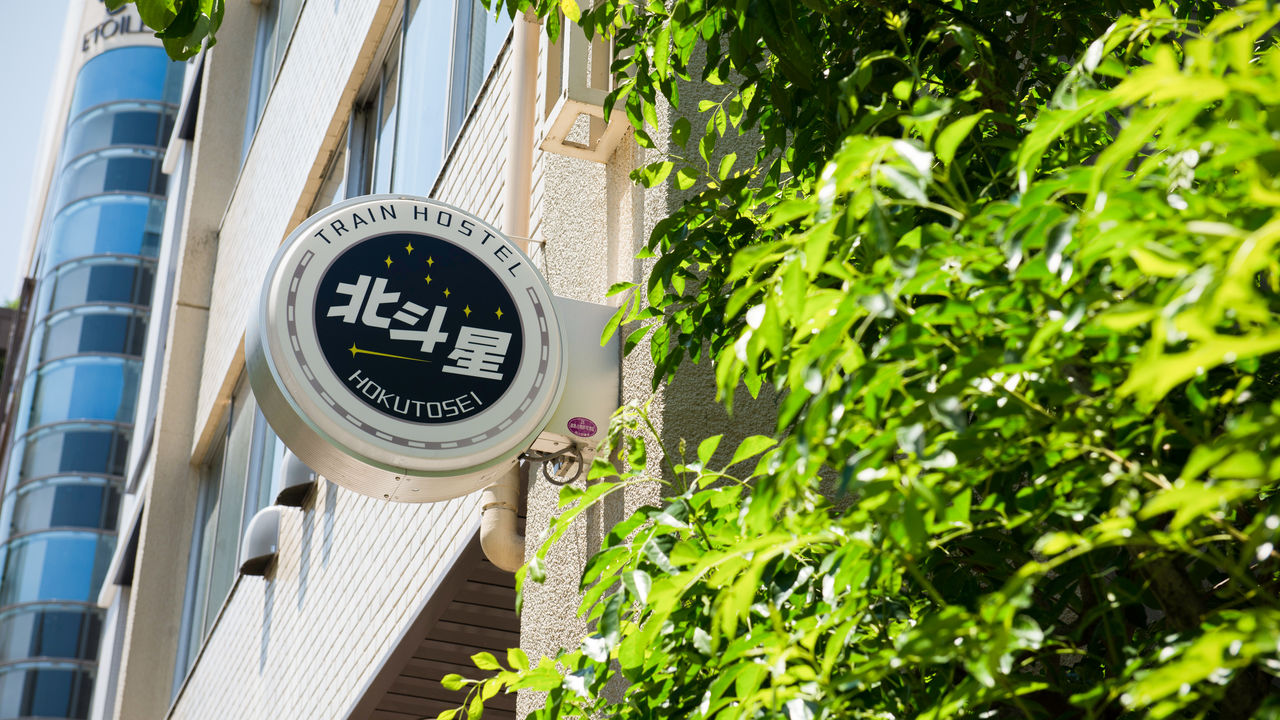 Jul 26, 2018
After a long run of 27 years, the Hokutosei, one of Japan’s most popular sleeper trains, found a home in a Tokyo hostel. The train’s berths, along with its its rollsigns, car number plates, and lighting fixtures, have been repurposed for the hostel’s customers, some of who have been coming to stay there for generations.

The limited express sleeper between Ueno Station in Tokyo and Sapporo Station in Hokkaidō—a more-than 16-hour trip one way—was discontinued in August 2015, after having been in operation since 1988. The extremely popular luxury line has left its name to a hostel in Tokyo, which continues to attract numerous fans. 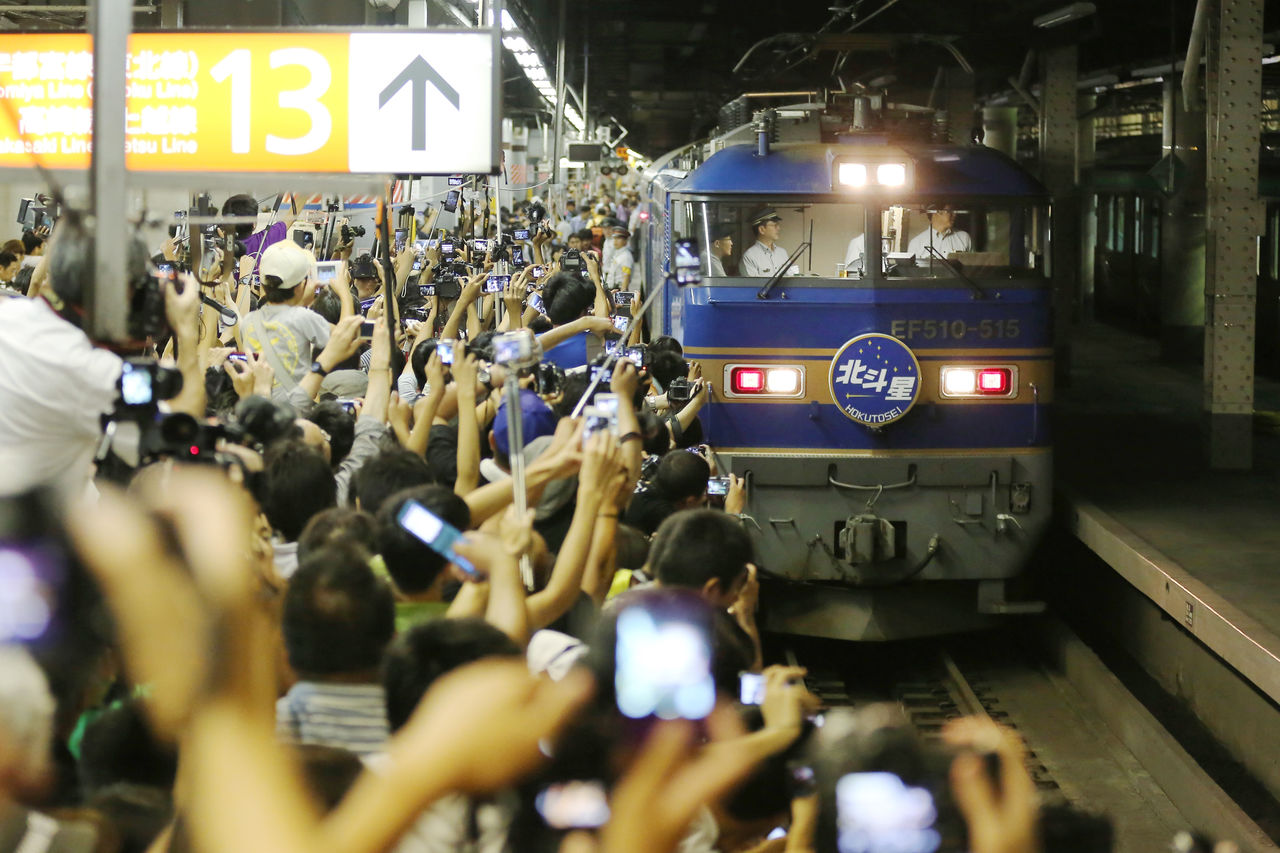 Opened in December 2016, Train Hostel Hokutosei is directly accessible from the JR Sōbu Line’s Bakurochō Station. The hostel is located inside a 45-year-old office building belonging to the JR East Urban Development Corporation and is operated by R. Project, a company specializing in the repurposing of dormant and discontinued facilities.

Having a JR-related company as the owner has made it possible to make lavish use of genuine Hokutosei furnishings and appointments. The first thing you see upon entering the hostel is the Hokutosei rollsign, a feature that is certain to tickle the fancy of railroad aficionados. 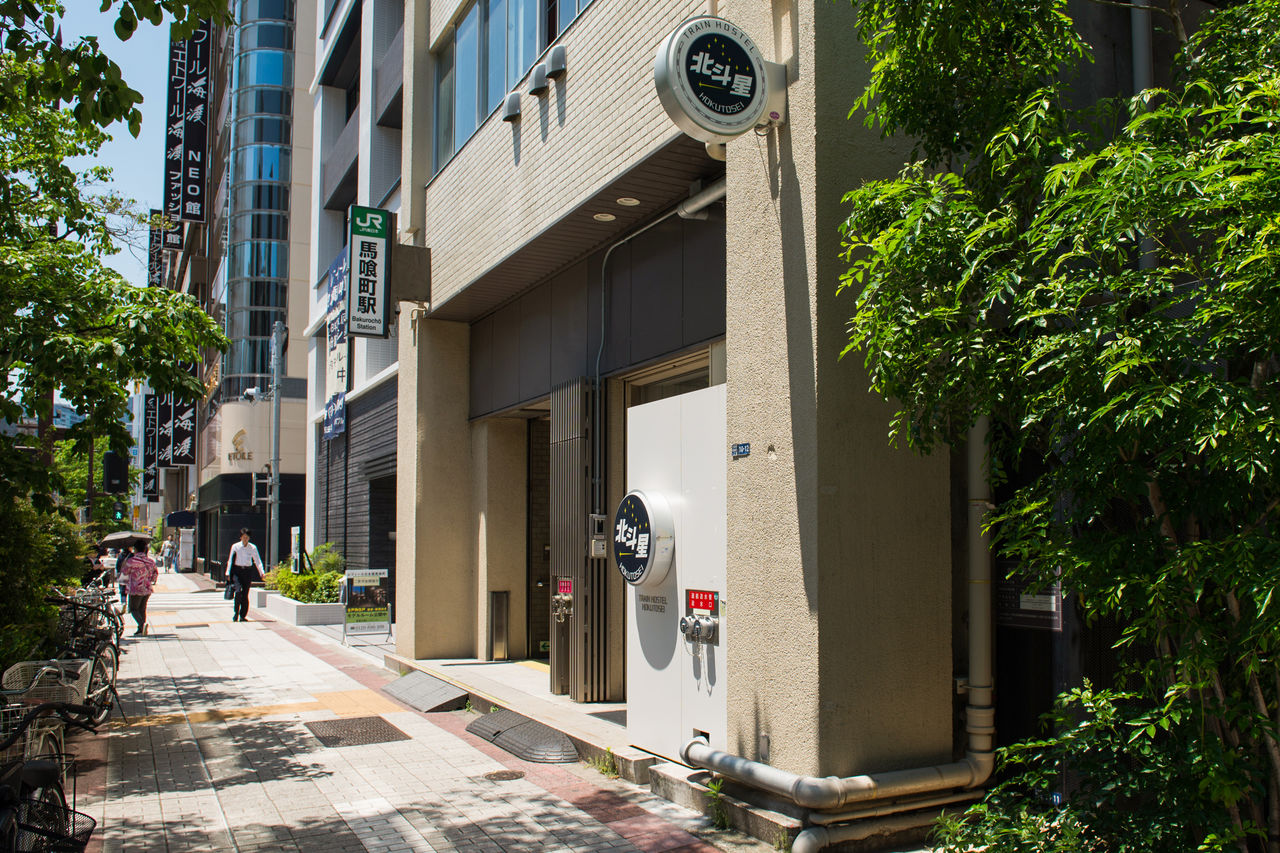 The hostel is directly accessible from JR Bakurochō Station. 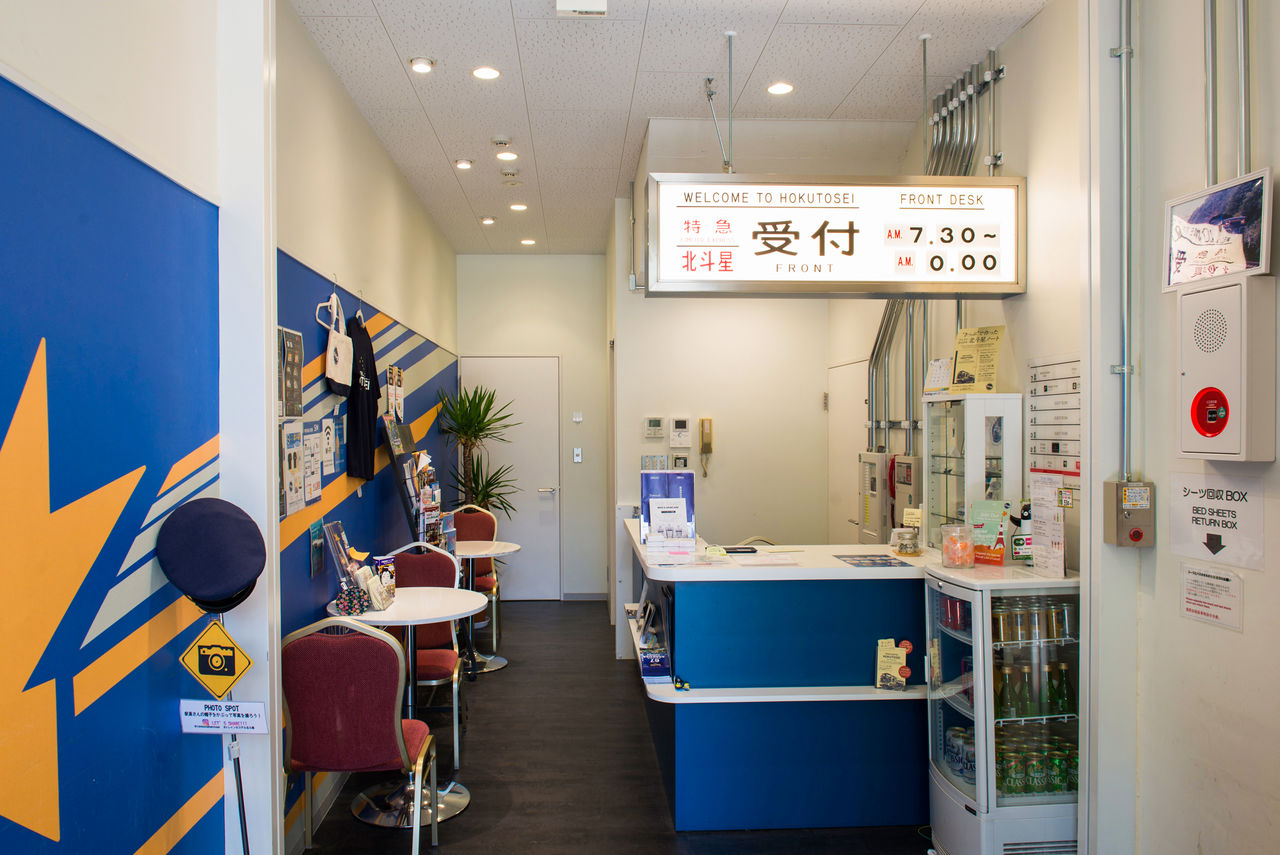 The train’s rollsign hangs over the reception desk. The wall to the left replicates the motif on the Hokutosei cars and is a popular backdrop for photos.

The hostel has six floors. Head upstairs from the first-floor reception level to the second floor, where you find the shared lounge and kitchen in addition to sleeping accommodations. The third through fifth floors are devoted to guest rooms. The sixth floor has showers and a coin laundry. While the rooms on the second through fourth floors are dormitory style rooms for both men and women, the fifth floor is restricted to women only. (The women-only floor will be moved to the second floor in October 2018.) 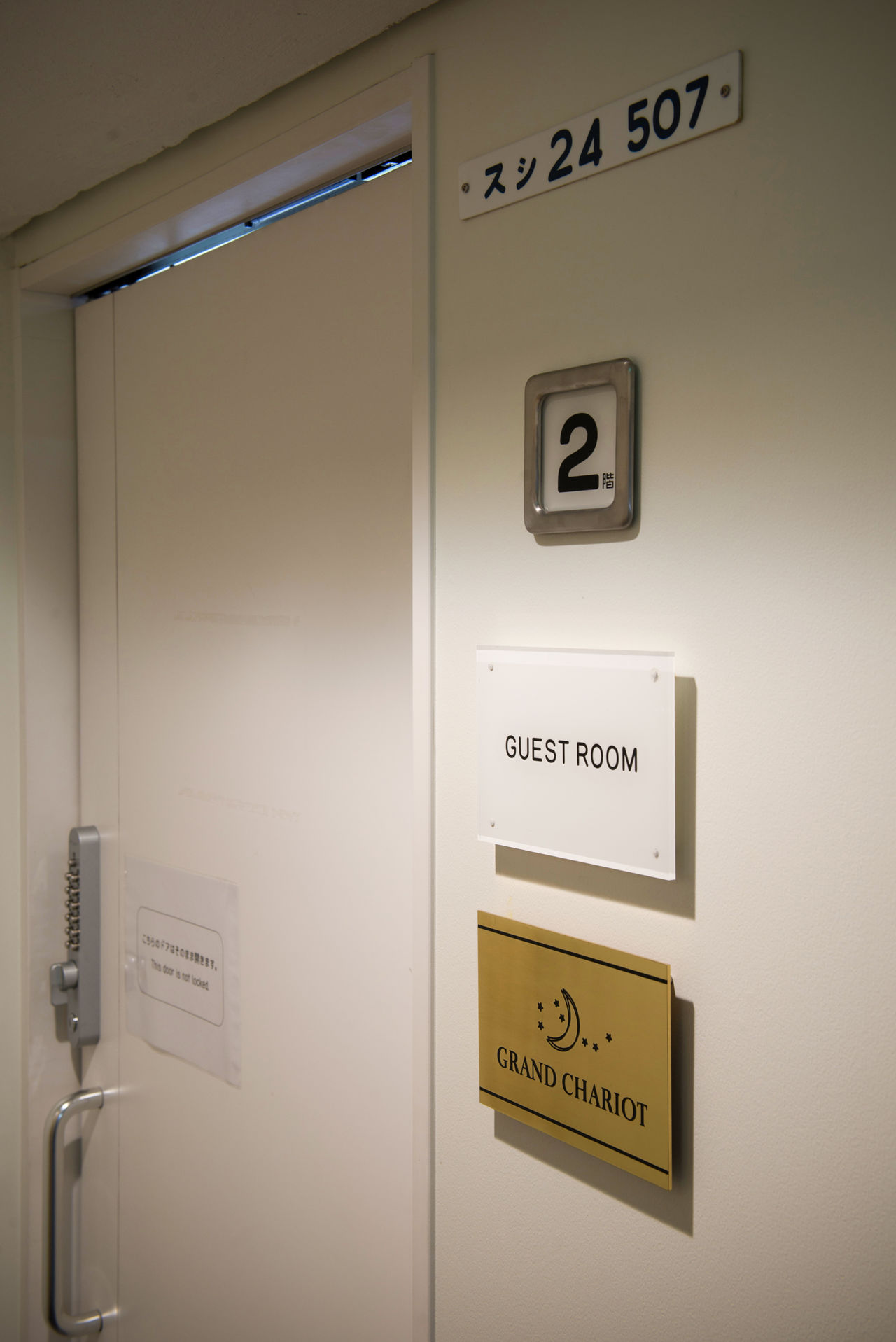 At the top is a sign indicating the sleeper car series number. The car number on the plate below indicates the floor number. 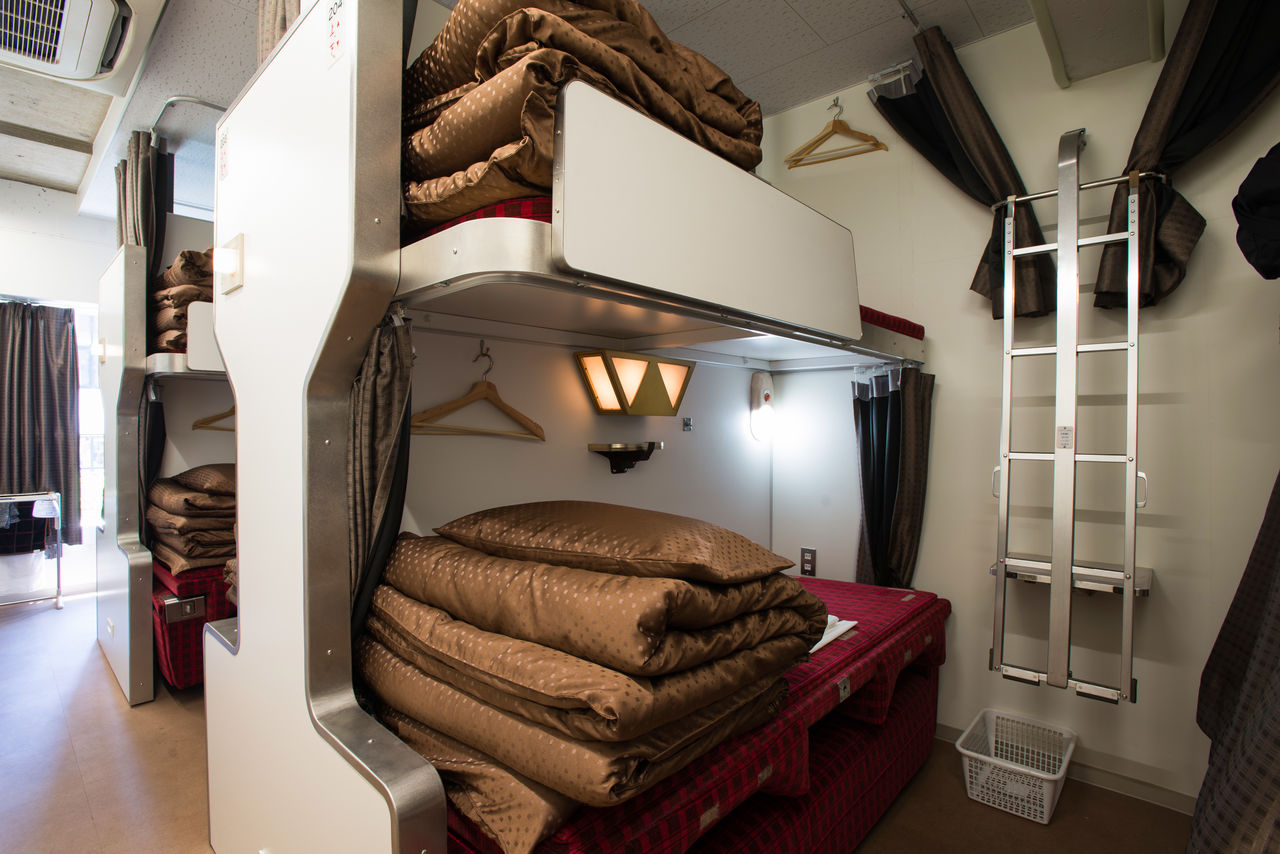 The berths in the dormitory-style room have the original ladders from the Hokutosei.

Some of the berths are equipped with a folding seat. Others can be converted into comfortable sofa-like seats. When you climb the ladder to the top berth and close the curtains you can almost hear the clatter of the train as it speeds along the railway tracks. 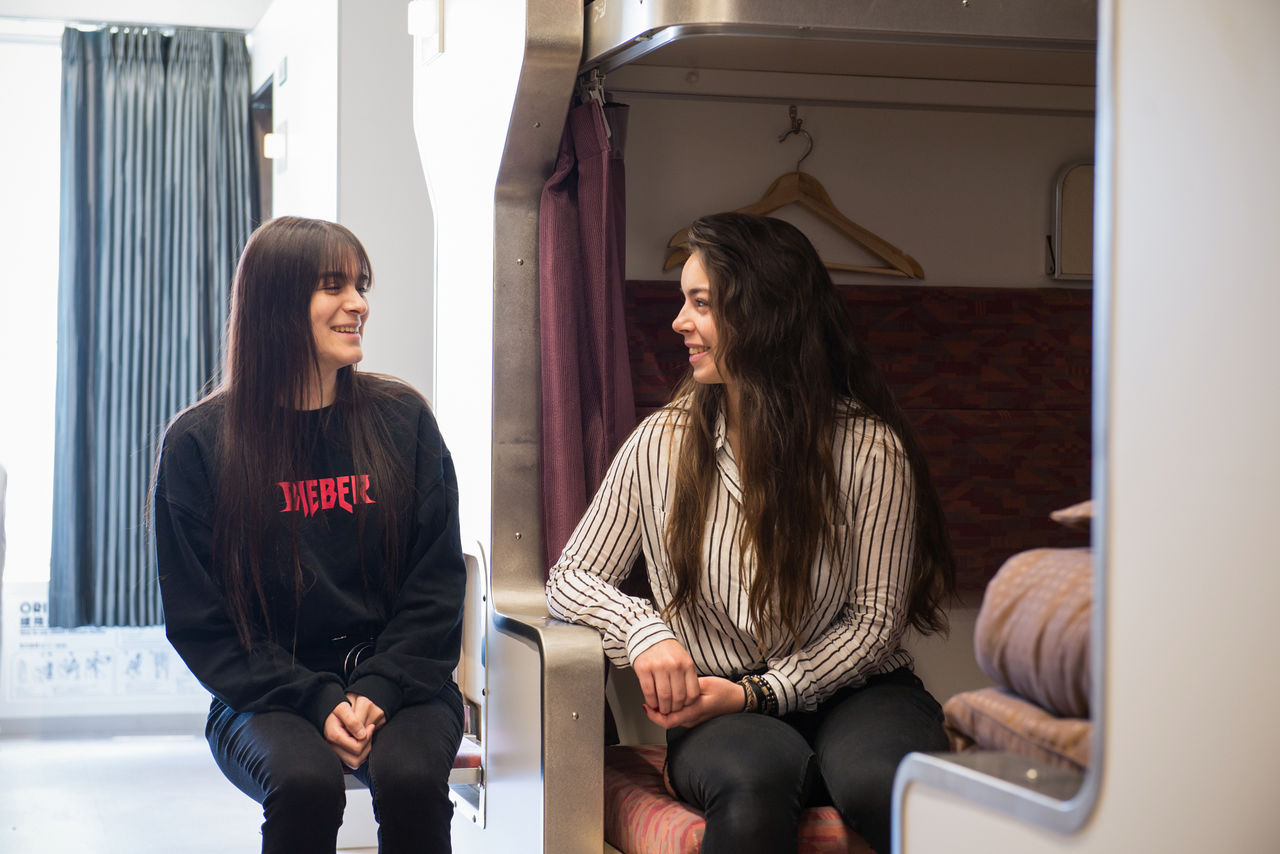 The folding seat offers a comfortable perch for conversation.

“We’re using the same original mattresses—but at only 70 centimeters in width, they were a bit narrow, so we’ve added another 10 centimeters for greater comfort. That’s a small change, but our Hokutosei fans have been quick to comment, some even expressing minor regret that we dared to change the original size,” laughs Okazaki Akiko, the hostel manager. 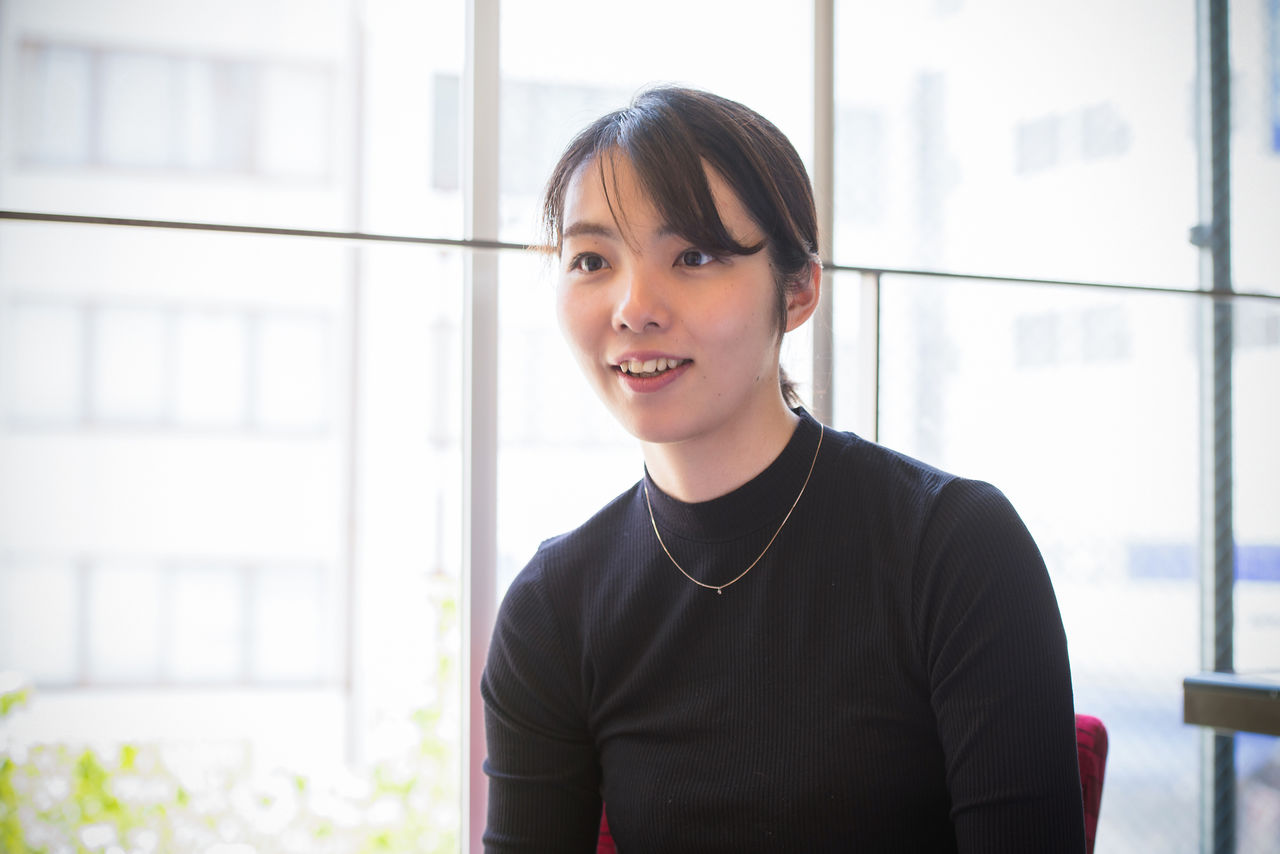 There is one deluxe A-class single room on each of the third and fifth floors. Here the tables, chairs, berths, and lamps are original fittings from the Hokutosei A-class Royal Suite. An open space at the top of the wall means there is not complete privacy, but guests can still savor the luxury of what once used to cost between ¥30,000 and ¥40,000 for a one-way ride. 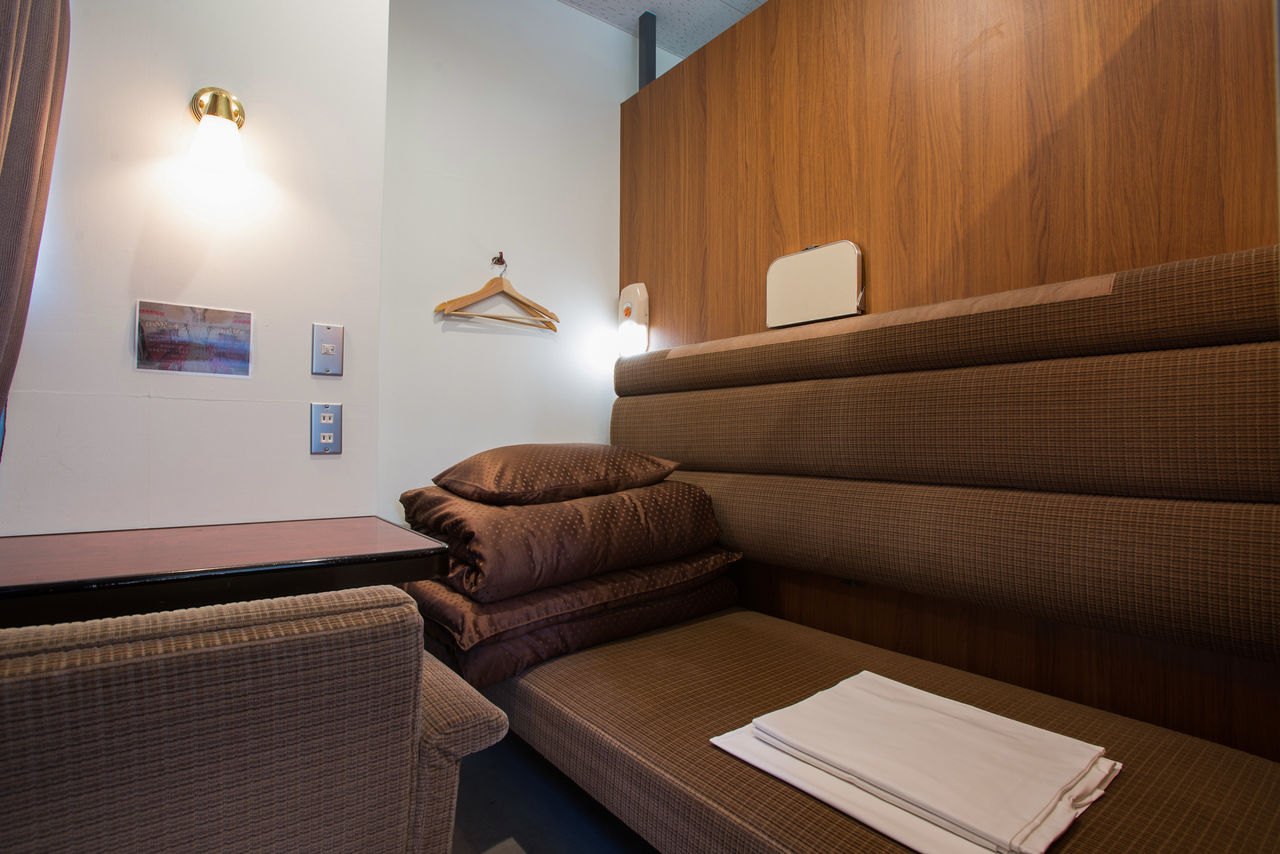 Guests are encouraged to note, too, the large double handles on the lavatory doors.

“We used the doors that were originally on the dining car,” says Okazaki. “They’re slightly smaller than usual, so we had to make special door frames to fit them.”

The hallways are lined with fold-down seats and the tables in the guestrooms are fitted underneath with the bottle opener so familiar to train passengers of old. Guests are certain to find great satisfaction in the care that has been taken to re-create in every detail the atmosphere of the beloved sleeper train. 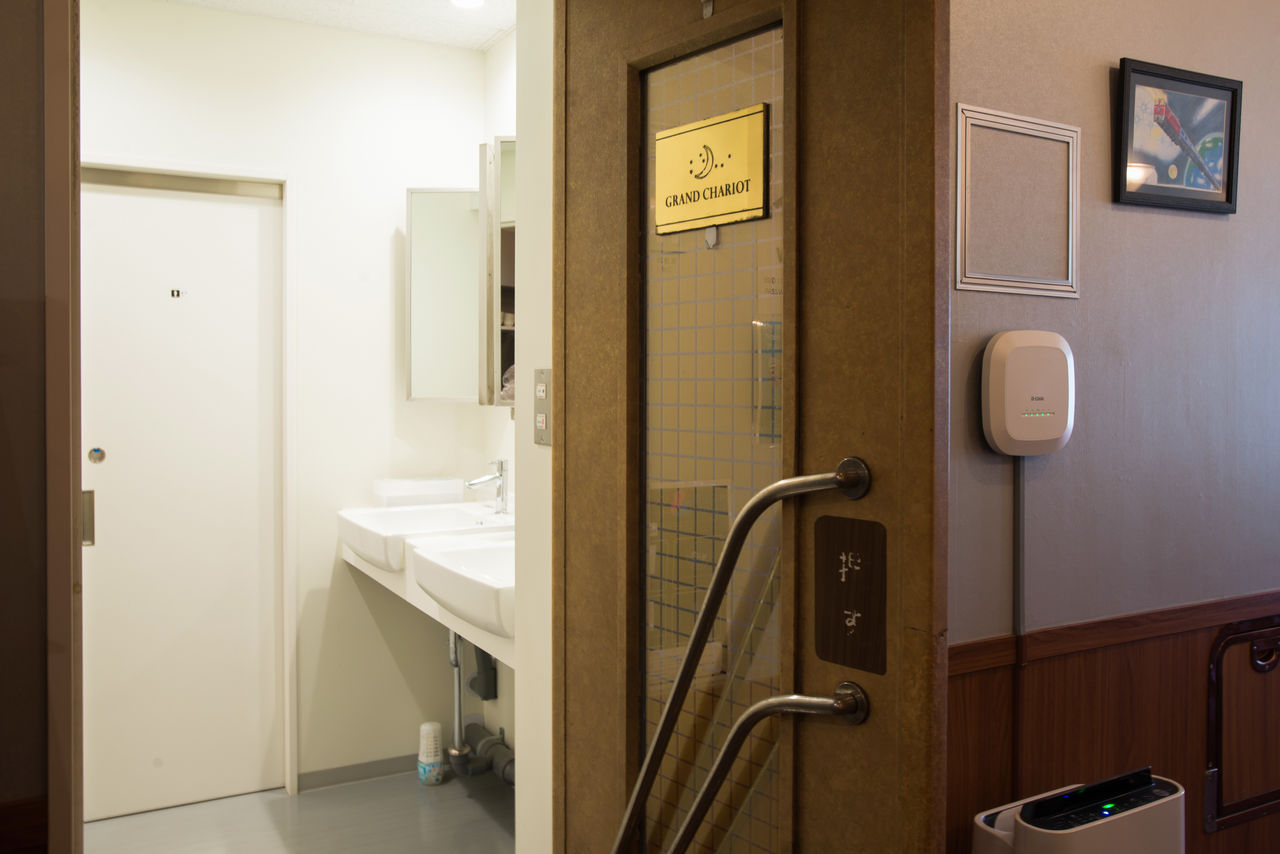 The lavatory door bears the original “Grand Chariot” plate that marked the entrance to the Hokutosei dining car. 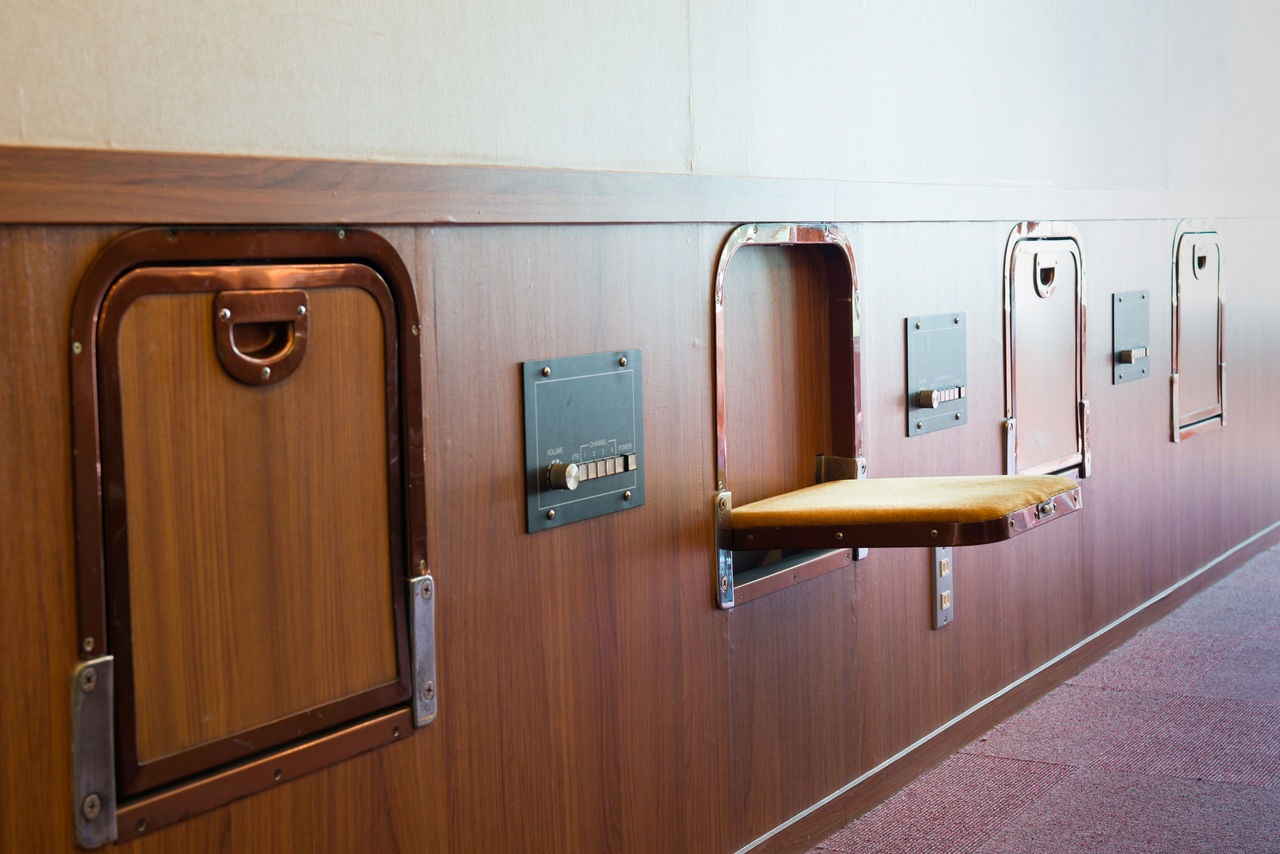 Folding chairs line the hallway wall. There is no sound to be heard from the radio panels between the seats, but they add an authentic touch nevertheless.

Guests are primarily Japanese railroad fans, ranging in age from 5 years old to 80. At only 30% to 40% of the clientele, foreign guests are far fewer, but their numbers are steadily increasing. The hostel is an attractive place to stay for foreign guests, and not only because of its unusual train theme. Bakurochō has easy access to both Narita and Haneda international airports, and guests can take advantage of the many convenience stores and supermarkets in the neighborhood to cook their own meals in the hostel’s shared kitchen. 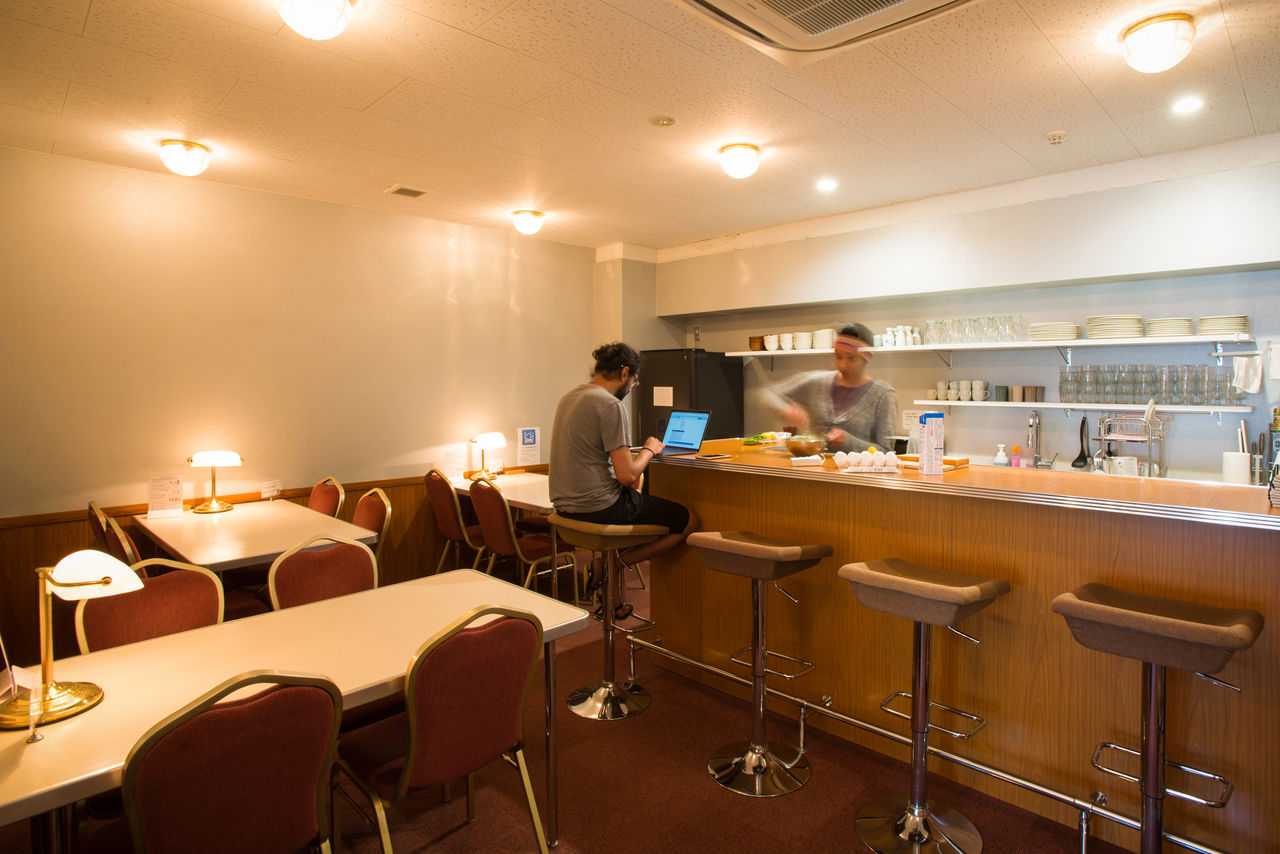 The shared kitchen has many of the appointments from the Grand Chariot dining car. At the time of this interview, the kitchen was being used by guests from India.

The photos of the Hokutosei hanging on the hostel walls were donated by former guests from their own personal collections.

More and more people are certain to be making their way to Train Hostel Hokutosei, with its unique and nostalgic features of Japan’s popular sleeper trains of old. 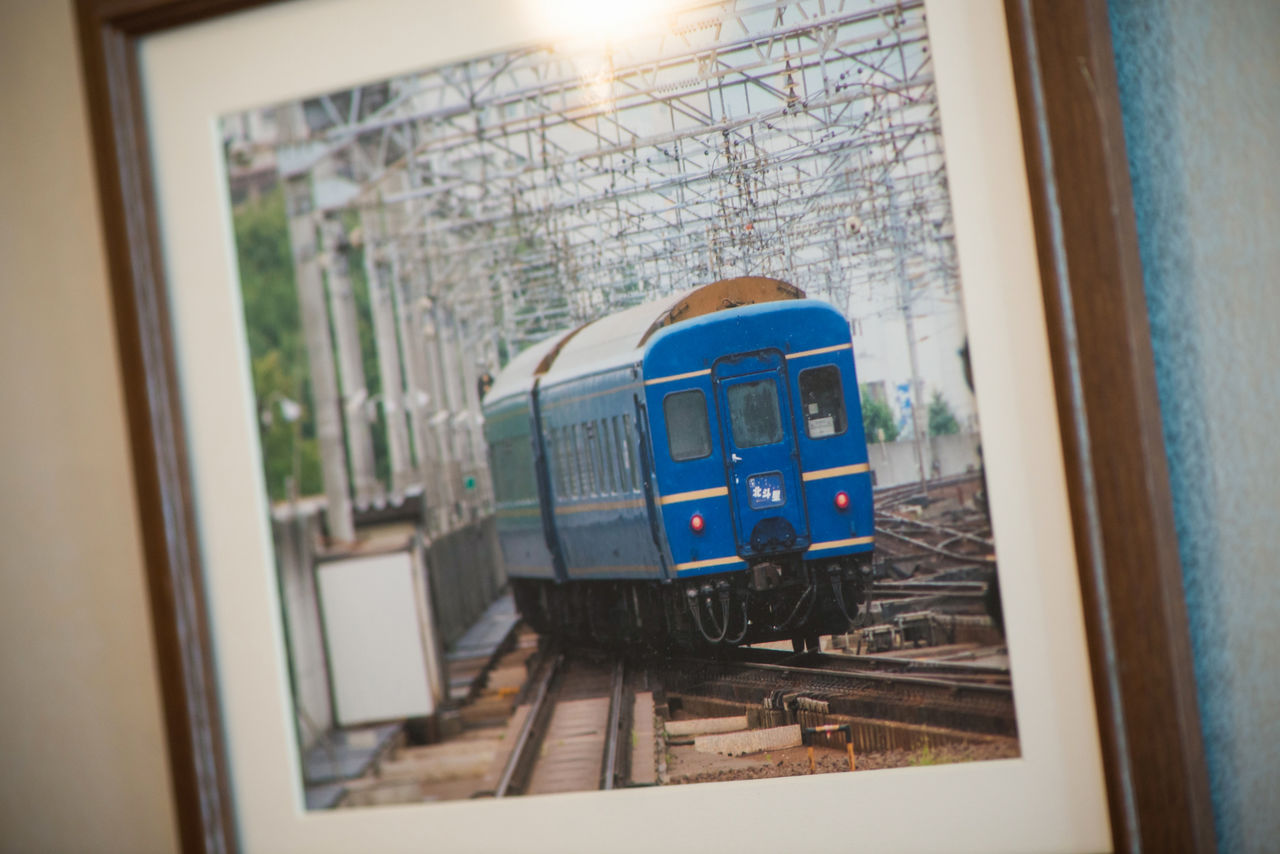 One of the photos donated by former guests.