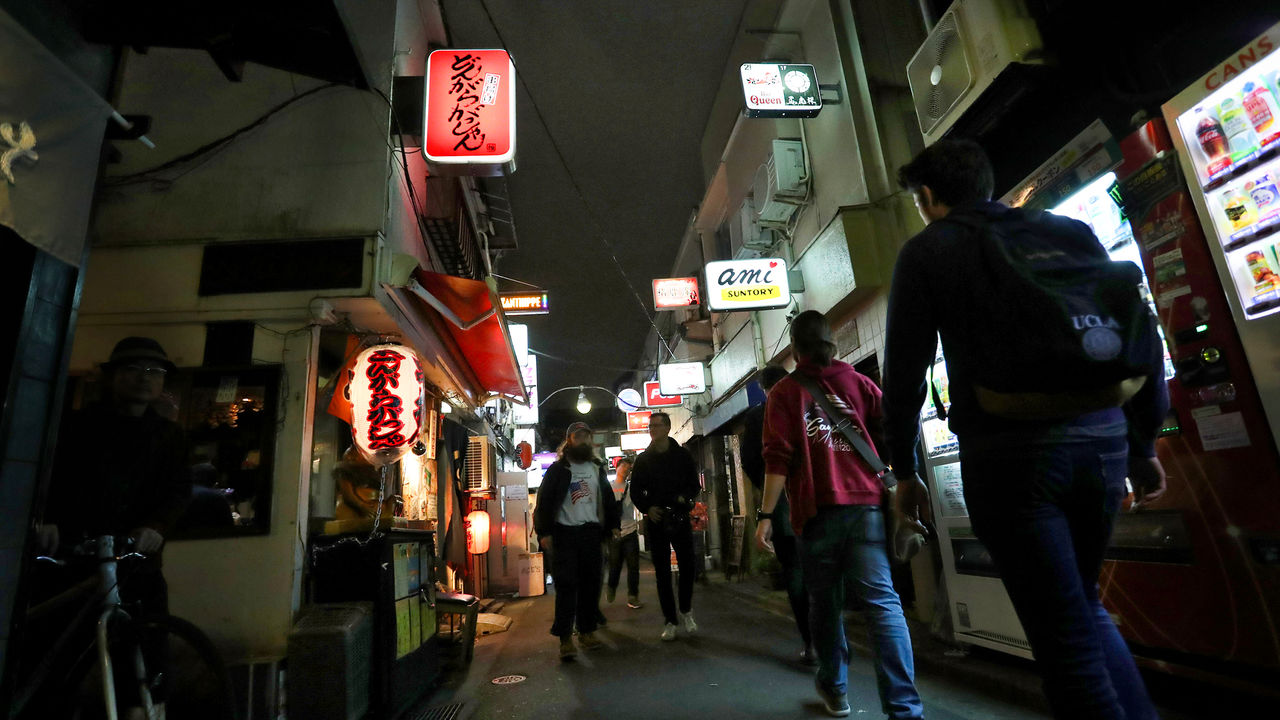 How to Drink in Shinjuku’s Golden-gai Like a Regular

Food and Drink Lifestyle Travel Sep 27, 2018
The Golden-gai district of Shinjuku is packed with bars overflowing with atmosphere, but it can be intimidating to get a foot in the door. To maximize your enjoyment, avoid visiting the bars in large groups, confirm the charges before settling in, be considerate of other patrons, and don’t overstay your welcome.

According to a 2018 survey on foreign visitors conducted by the Tokyo metropolitan government, the most popular tourist spot in Tokyo is, surprisingly enough, not Ginza or Asakusa, but the Shinjuku-Ōkubo area with Shinjuku Station as its main gateway. Fully 56% of travelers surveyed visited this area, home to business and entertainment districts along with one of Tokyo’s largest Koreatowns, compared to 49.7% for Ginza and 45.7% for Asakusa. The Shinjuku area has a wealth of attractions, not least of which is the station itself, the busiest in the world, used by an average of 3.5 million people daily; also nearby are the high-rises of the Nishi-Shinjuku area and numerous electronics retailers and department stores. The area around Shinjuku is also a popular destination for nightlife.

One of those nightlife destinations recording a noticeable increase in foreign tourists in the past few years is Golden-gai, in Shinjuku’s Kabukichō entertainment district. Emanating a slightly seedy atmosphere, Golden-gai has long been a fixture among denizens of the night, but knowing what to expect when you get there can make the experience all the more enjoyable for visitors from abroad who enjoy going out drinking. 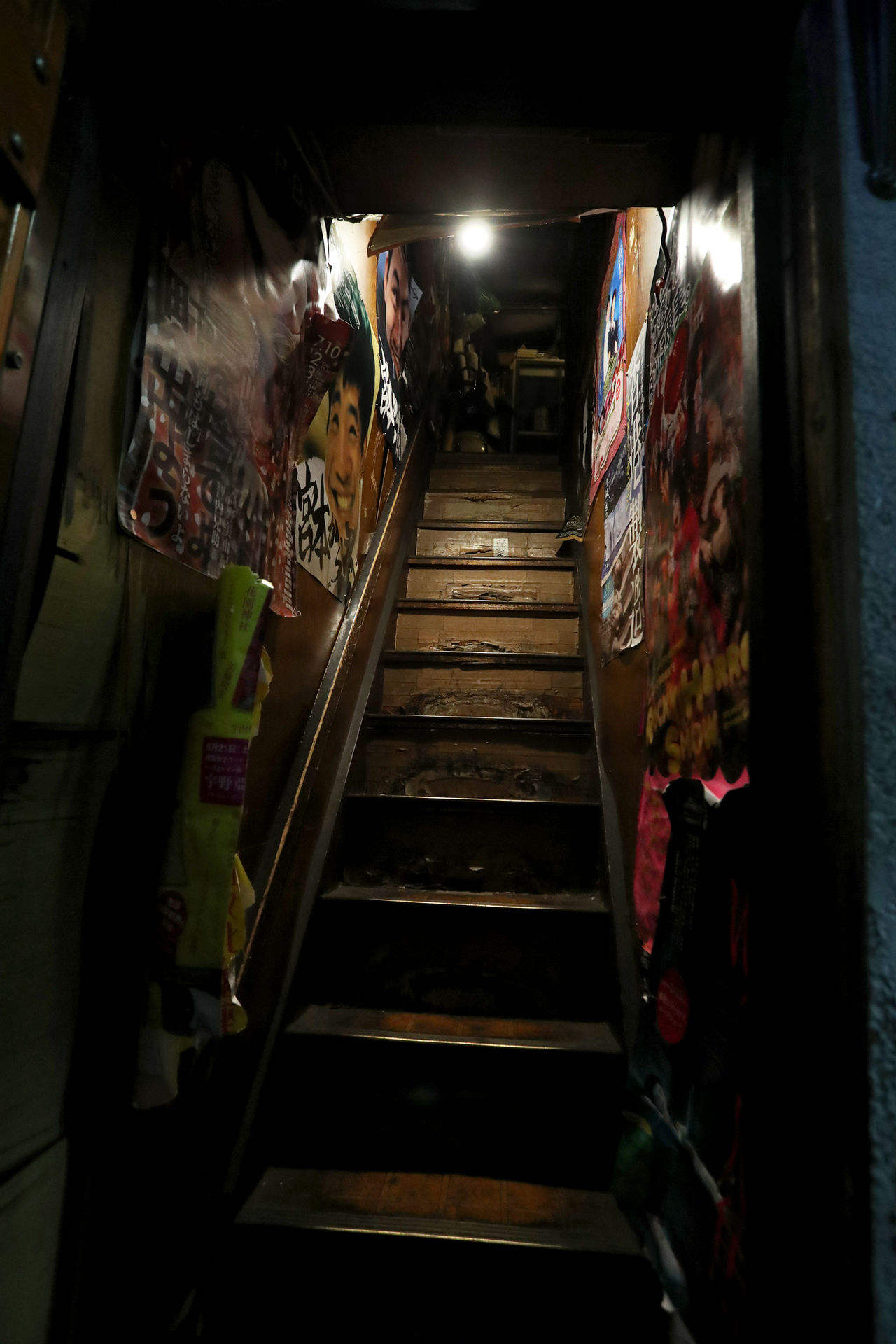 The dimly lit stairs to the second-floor bar Nabe-san are an intimidating climb for first-time visitors to Golden-gai.

The narrow lanes of Shinjuku’s Golden-gai are lined with nearly 300 tenement-style structures housing tiny bars, each with a floor area of no more than 10 square meters. Even Japanese people find bars at Golden-gai hard to approach, and first-timers may hesitate to push open the door and peek inside. Once they do, they will find patrons and staff sitting almost knee-to-knee in the tight quarters. To have an enjoyable drinking experience, it pays to know the Golden-gai rules before you set out. 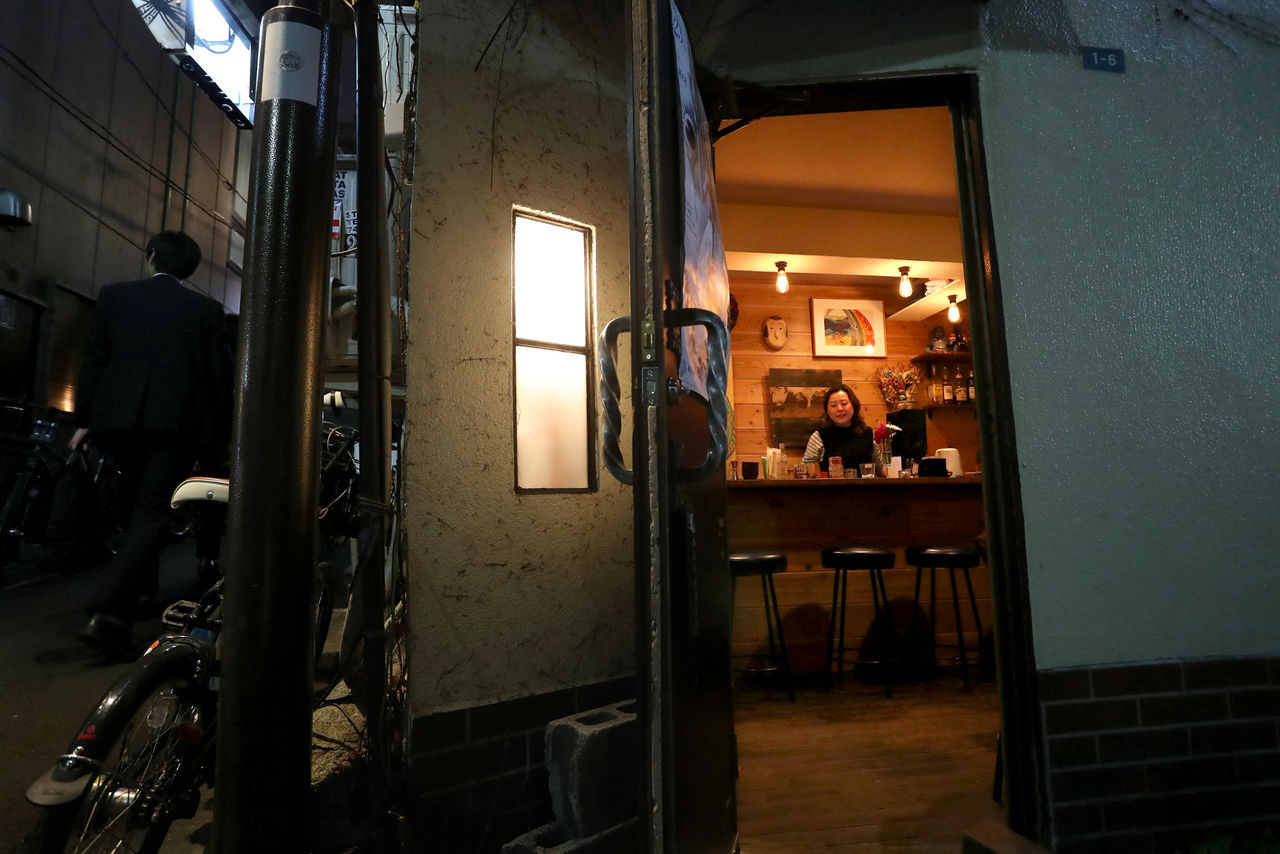 Bar Miki exudes a quieter feeling that makes it relatively easy to approach.

All the bars are tiny places, and some of them are “stand bars” with no seating at all. Many patrons come to Golden-gai to drink by themselves, so large groups can detract from the bars’ atmosphere. Some establishments even refuse entry to groups, so it’s best to go drinking alone or with just one or two other people in tow.

Many Golden-gai bars add a charge—generally between ¥500 and ¥1,000, for a starter that’s served automatically—to the bar tab. This fee can also take the form of a straightforward table charge. These days, more bars are displaying signs informing non-Japanese about the charges in effect. But in a neighborhood where many outlets don’t even have a menu on display, this information may not be evident to the first-time drinker. Confirming what you’ll be paying up front lessens the chance of an argument when it comes time to settle the bill.

Rule Three: Respect the Barkeep and the Patrons

In places where the drinks are flowing, polite behavior can of course fall by the wayside to some extent, but simple courtesy still goes a long way. The person behind the counter is master of all he or she surveys, no matter how tiny the bar may be, so treat this person with due deference. And at Golden-gai, engaging with fellow patrons is part of the drinking culture, so don’t confine the conversation to just the people in your group. Be sure not to get overly friendly, though, as otherwise you could be perceived as an obnoxious drunk. 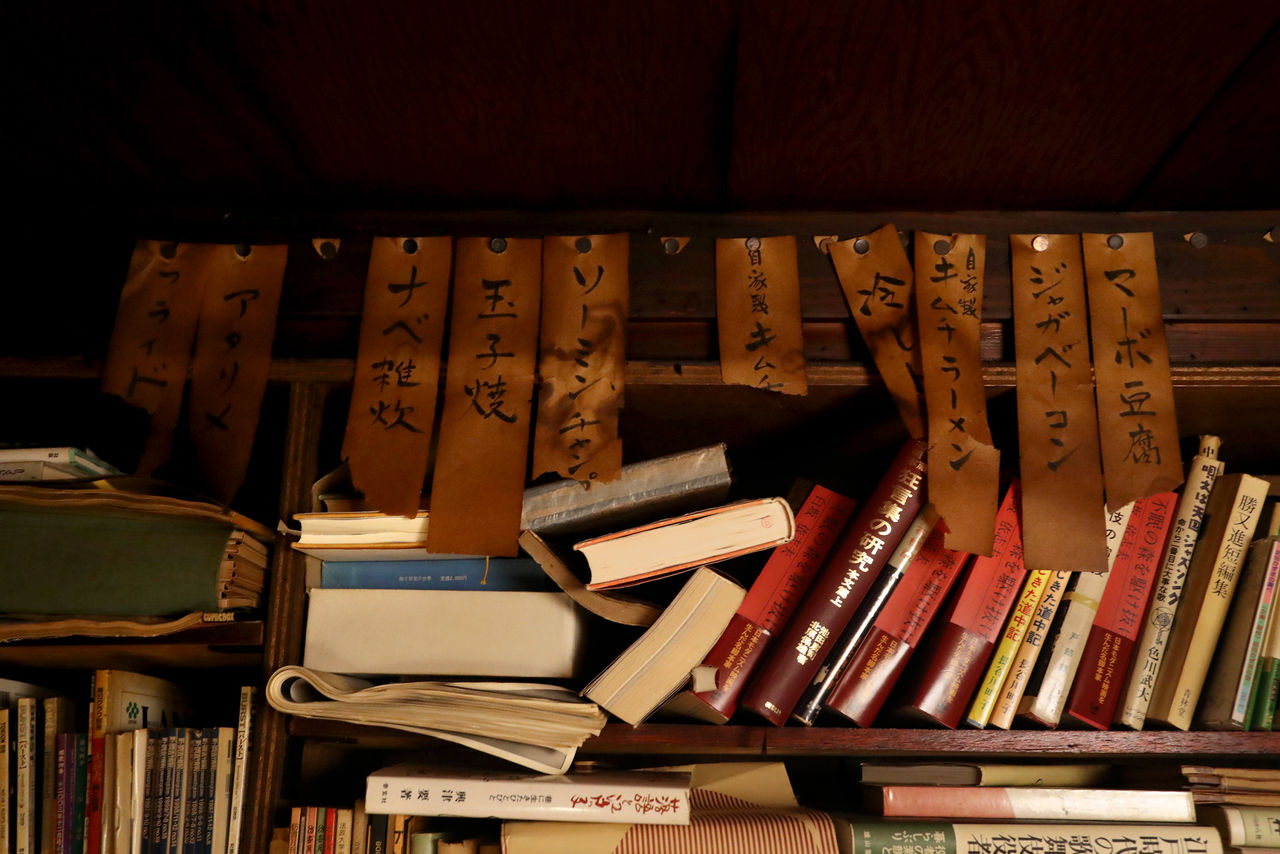 Yellowed strips of paper constitute the menu at Nabe-san. Prices are nowhere to be seen.

Now that you’re acquainted with the rules, you’re ready to sally forth. In the 1970s, Golden-gai was a magnet for intellectuals of all stripes, who would engage in vigorous debate and drink until dawn. Fifty years later, that can still be the case. Many bar owners and regular patrons are very knowledgeable about film, literature, or art, and several are currently active as artists or creators.

Go Miki, an artist who works in a wide range of media, opened Bar Miki on the Hanazono Goban-gai lane, toward the north of the district, in February 2016. The bar’s interior is done up in clean, modern lines and Go’s own works—carved wooden masks and motifs burned onto wood, which she calls her “burning art”—hang on the walls. Her bar is also frequently the site of live events and exhibitions of photographs and other works by invited artists.

Her aim, says Go, is to create a homelike atmosphere where customers chat with one another as they share the small space that Bar Miki has to offer. 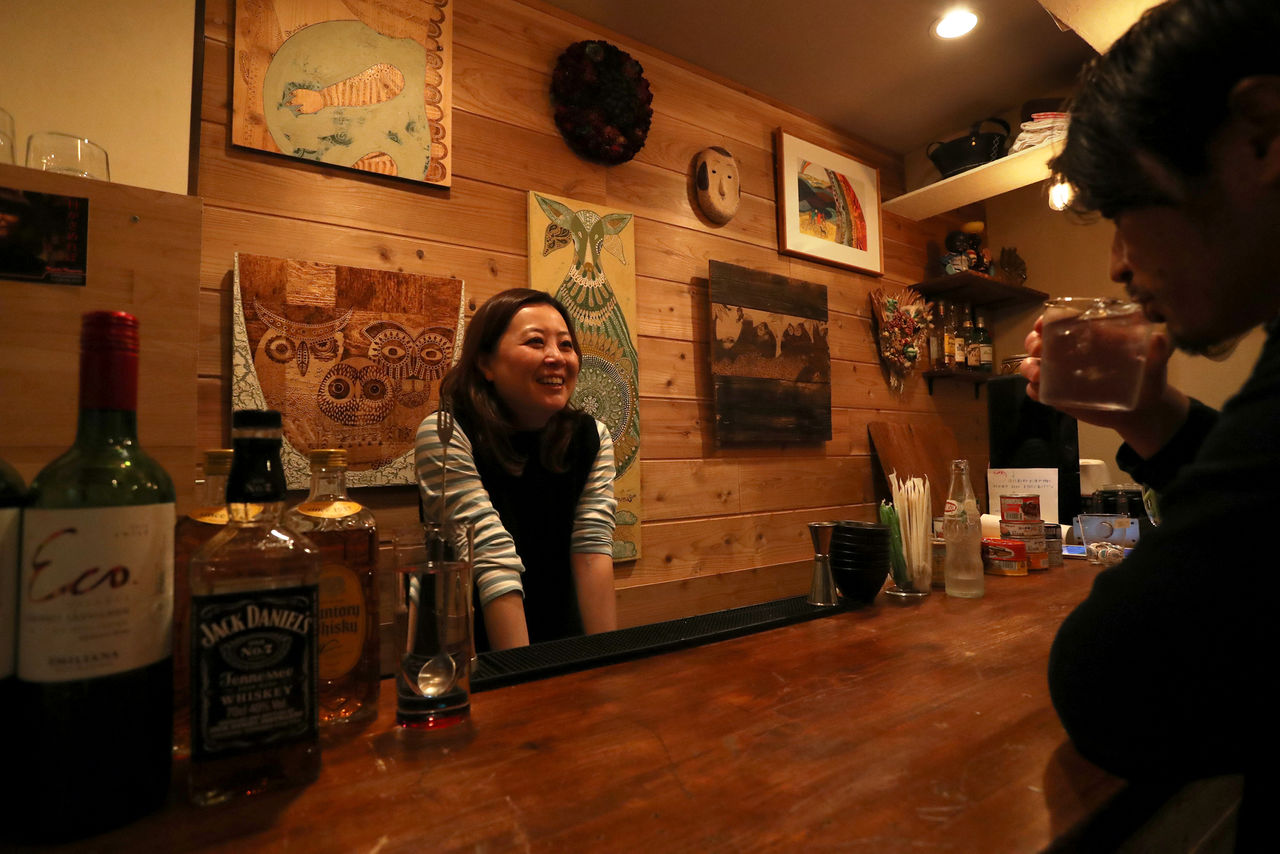 At Bar Miki, customers can sip while enjoying the artworks on the wall.

One good place for Golden-gai beginners to start their bar-hopping tour is Cambiare, which doesn’t charge for a table or the starter snack. If you want something to nibble on, its pizza Margherita, very reasonably priced at ¥500, is prepared on the spot. This bar, located on the Hanazono Sanban-gai lane, attracts many horror movie buffs due to its interior reproducing the atmosphere of the 1977 cult masterpiece Suspiria, by the Italian film director Dario Argento. 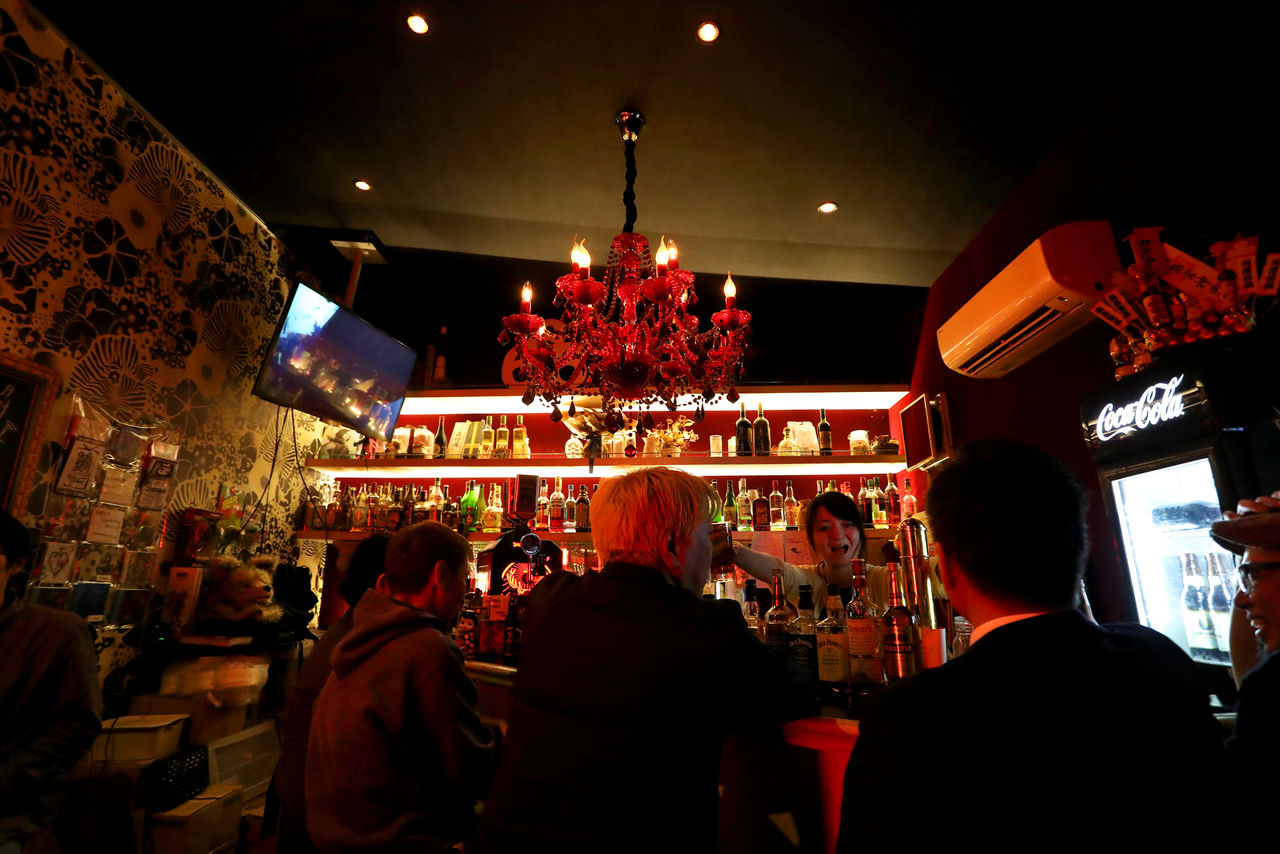 The dance school where Suspiria is set inspired Cambiare’s décor. 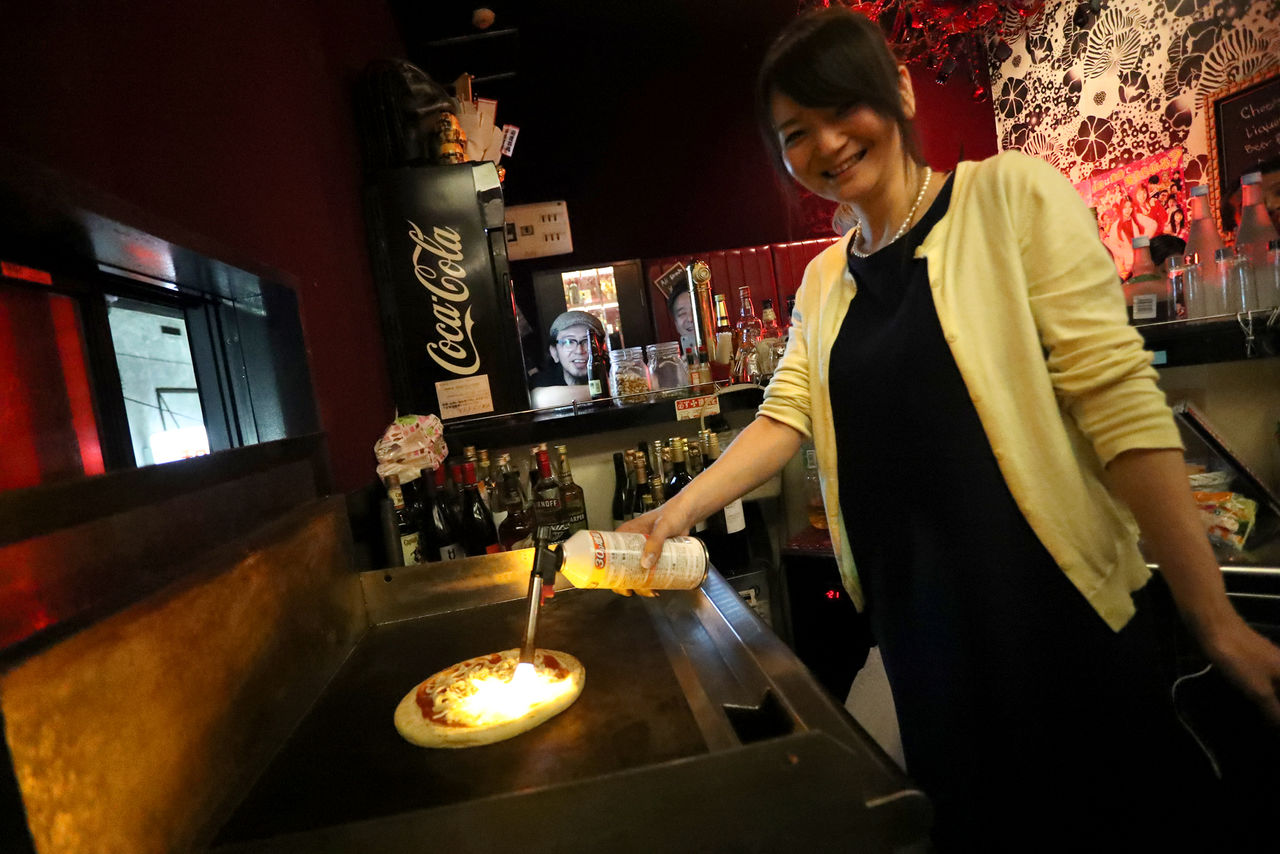 Pizza is prepared on the spot.

Another “must visit” establishment is Nabe-san, opened in 1973 on the Hanazono Ichiban-gai lane. Even today this place exudes the atmosphere of Golden-gai in its heyday. In the words of owner Nao-san, “Learn the Golden-gai ‘rules of the road’ and have fun. You’ll get even more enjoyment out of the experience if you know the history of this area.” 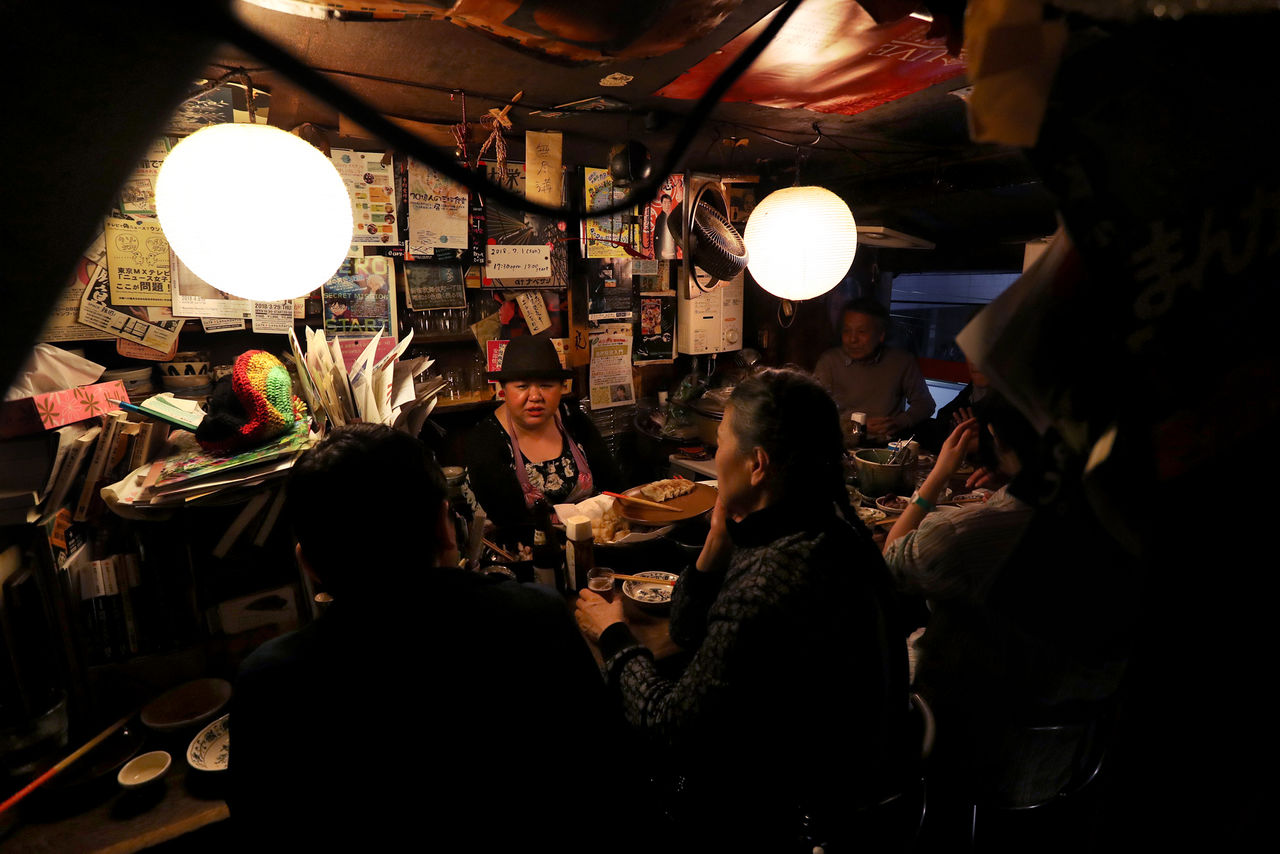 Despite the climb up spooky stairs, Nabe-san, one of Golden-gai’s most venerable bars, is always packed.

Golden-gai is home to nearly 300 bars jammed into one small district. Each one has a distinctive vibe, but you’re sure to find one that fits the bill for you. Just make sure you don’t overstay your welcome. When the bar is getting crowded, it’s part of the “Way of Golden-gai” to know when to leave to make room for new customers. Bar-hopping is normal in this part of town, and if you ask the barkeep for recommendations on where to go next, you’ll be pointed in the right direction. Part of the fun of drinking at Golden-gai is sampling at least a few bars a night. 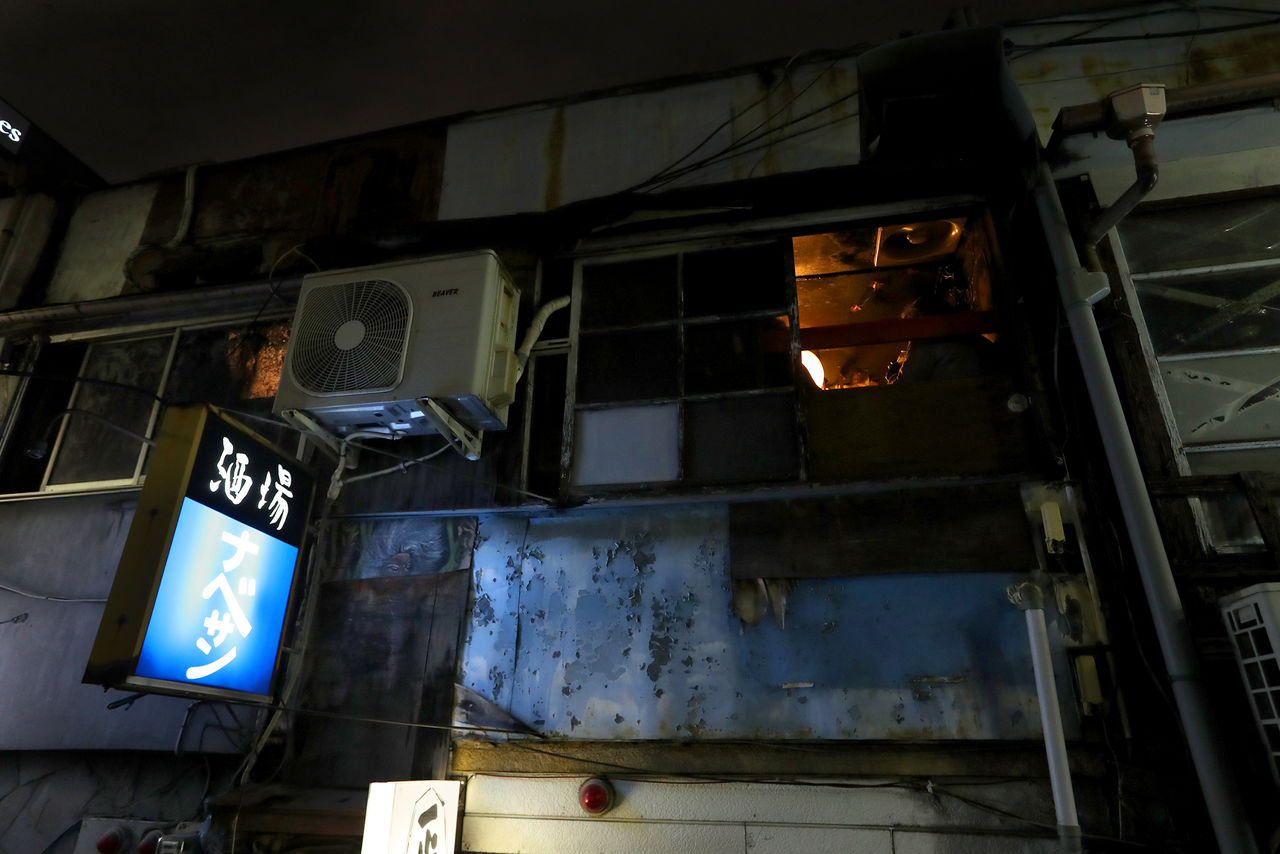 The night is filled with the loud talk and laughter of tipsy patrons.