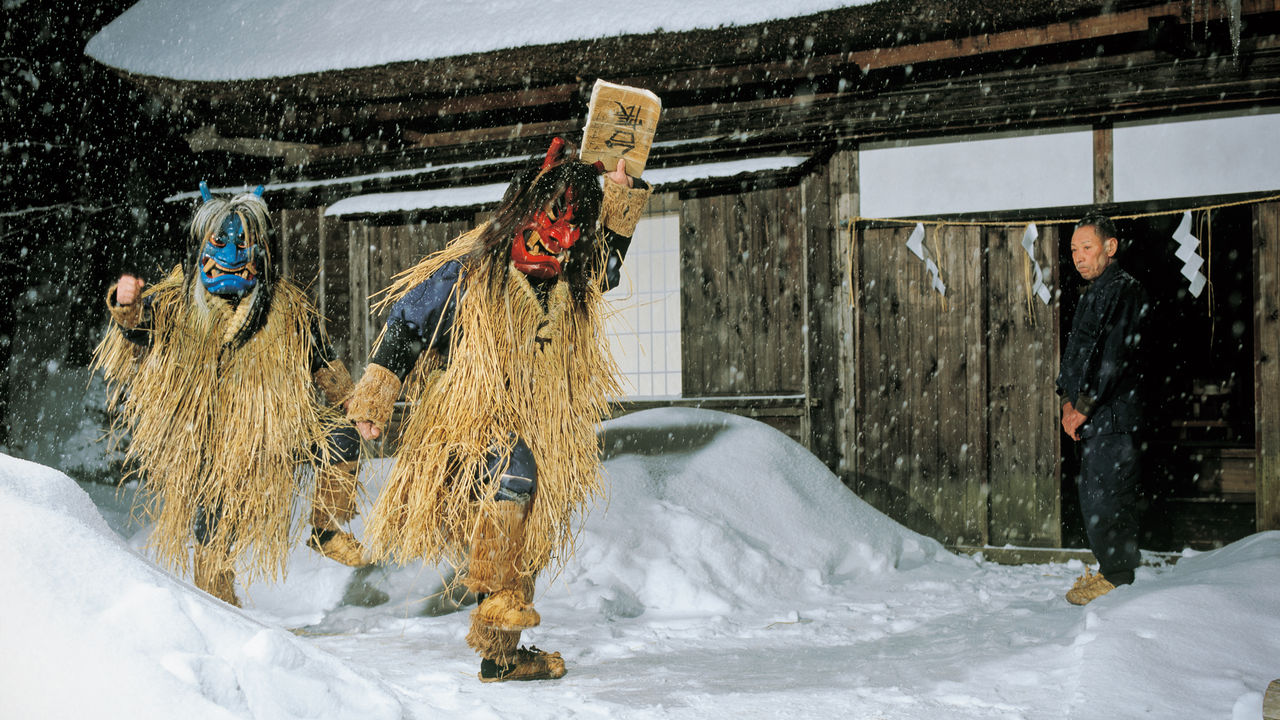 Culture Jan 26, 2019
The namahage of Oga, Akita Prefecture, are notable for their fierce masks and strange costumes. These are raihō-shin, gods come to bring good fortune at special times of the year. These visiting deities are an integral part of local festivals in many parts of Japan.

Raihō-shin are deities that appear at certain times of the year to admonish the lazy and naughty and to bring bountiful harvests and good fortune. Men wearing fierce masks and strange costumes go from house to house to scold naughty children while dispensing blessings in a raucous community tour. 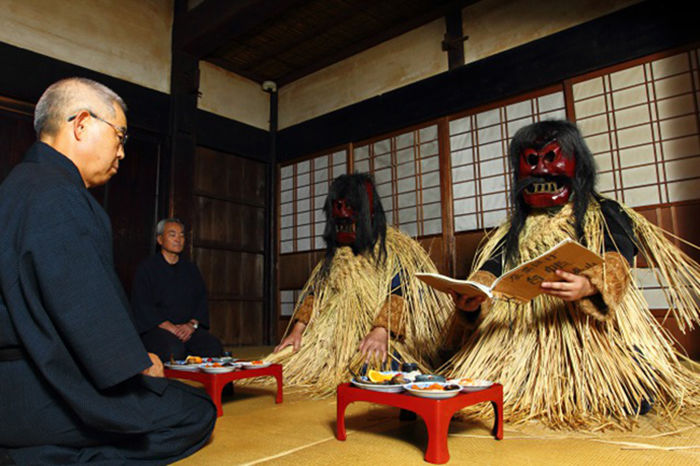 The namahage bring good fortune to every household they visit.

Among other raihō-shin included in the Intangible Cultural Heritage list are the pāntu of Miyako Island in Okinawa Prefecture and the amamehagi of Noto in Ishikawa Prefecture. The total encompasses 10 elements involving Raihō-shin in eight prefectures, including the toshidon of Koshikijima in Kagoshima Prefecture which were the first to be registered in the Intangible Cultural Heritage list in 2009. All involve events in which men dressed in fierce masks and strange costumes go house to house to scold the naughty and bring good fortune.

In the Tōhoku region, four local customs were selected: the namahage of Oga, the Yoshihama suneka of Ōfunato, Iwate Prefecture, the Yonekawa Mizukaburi Festival of Tome, Miyagi Prefecture, and the amahage of the Koshōgatsu festival in the town of Yuza, Yamagata Prefecture. 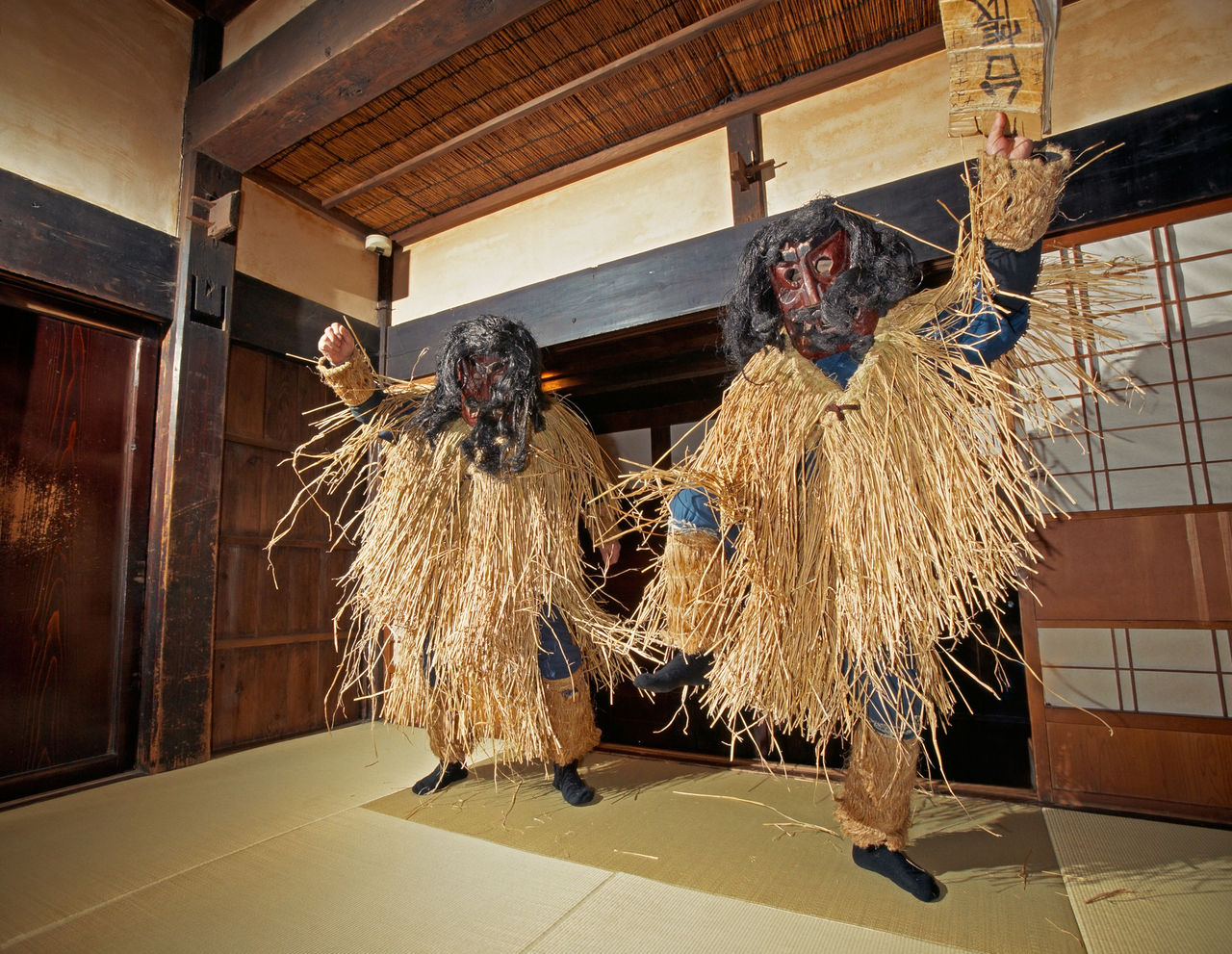 Namahage dressed in straw capes dance in a house they have come to bless.

In the dark of New Year’s Eve, the namahage go from house to house chanting loudly, “Where are the crying children? Where are the children who disobey their parents?” Children are quick to promise they will never do anything bad again when confronted by the prancing namahage with their fierce masks, straw cloaks, waving big (but thankfully fake) knives. After being served sake and food by the head of the household, the namahage depart in high spirits to make their way to the next house. 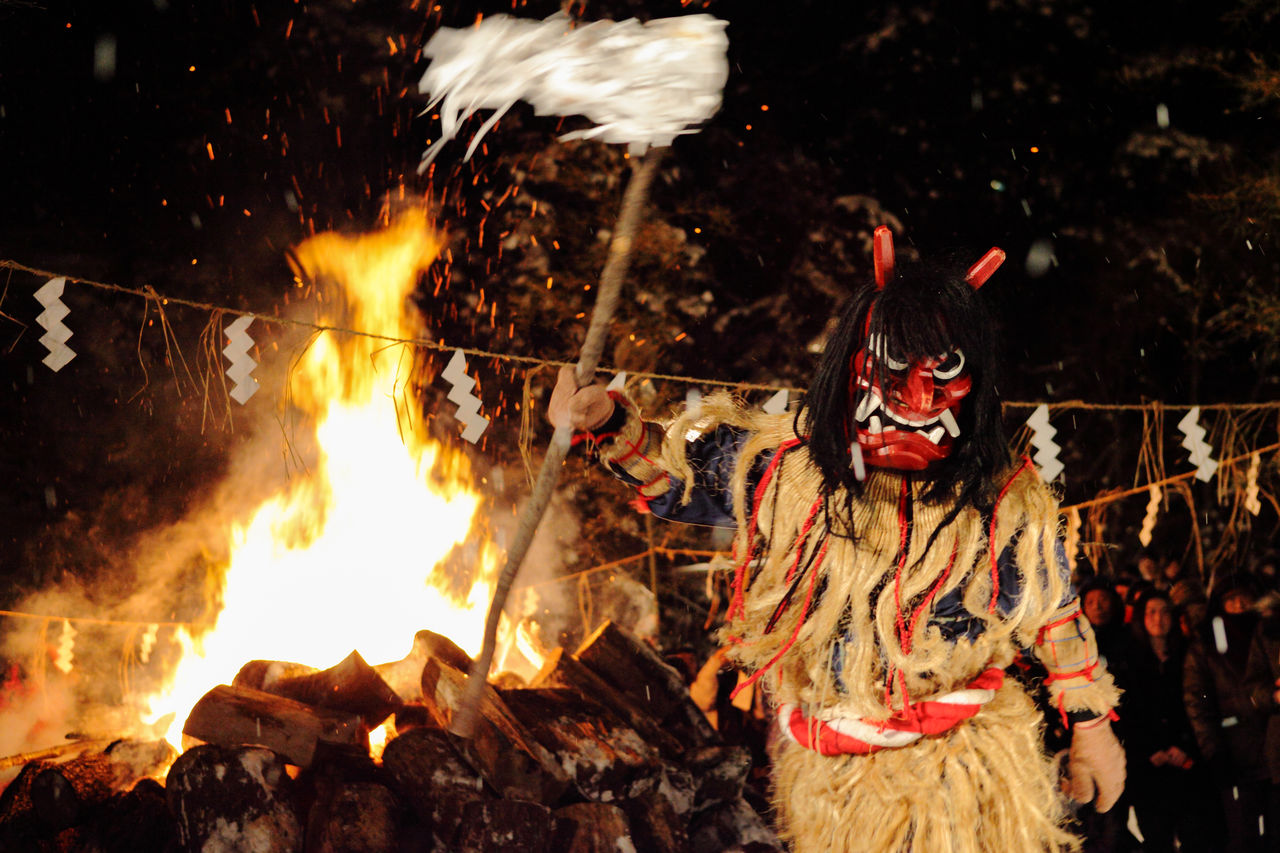 The Namahage Sedo Festival held every year in February.

Tourists can see the namahage, who traditionally appear on New Year’s Eve, at the Namahage Sedo Festival held every year in February. This festival takes place on the grounds of the Shinzan Shrine, believed to be where the tradition of the namahage originated. After receiving sacred masks under the flickering light of numerous torches, young men make their way up a mountain where they are transformed into namahage. The sight of the beasts returning in the snow bearing torches is breathtaking. The festival also includes a reenactment of the namahage of Oga and a thrilling drum performance. 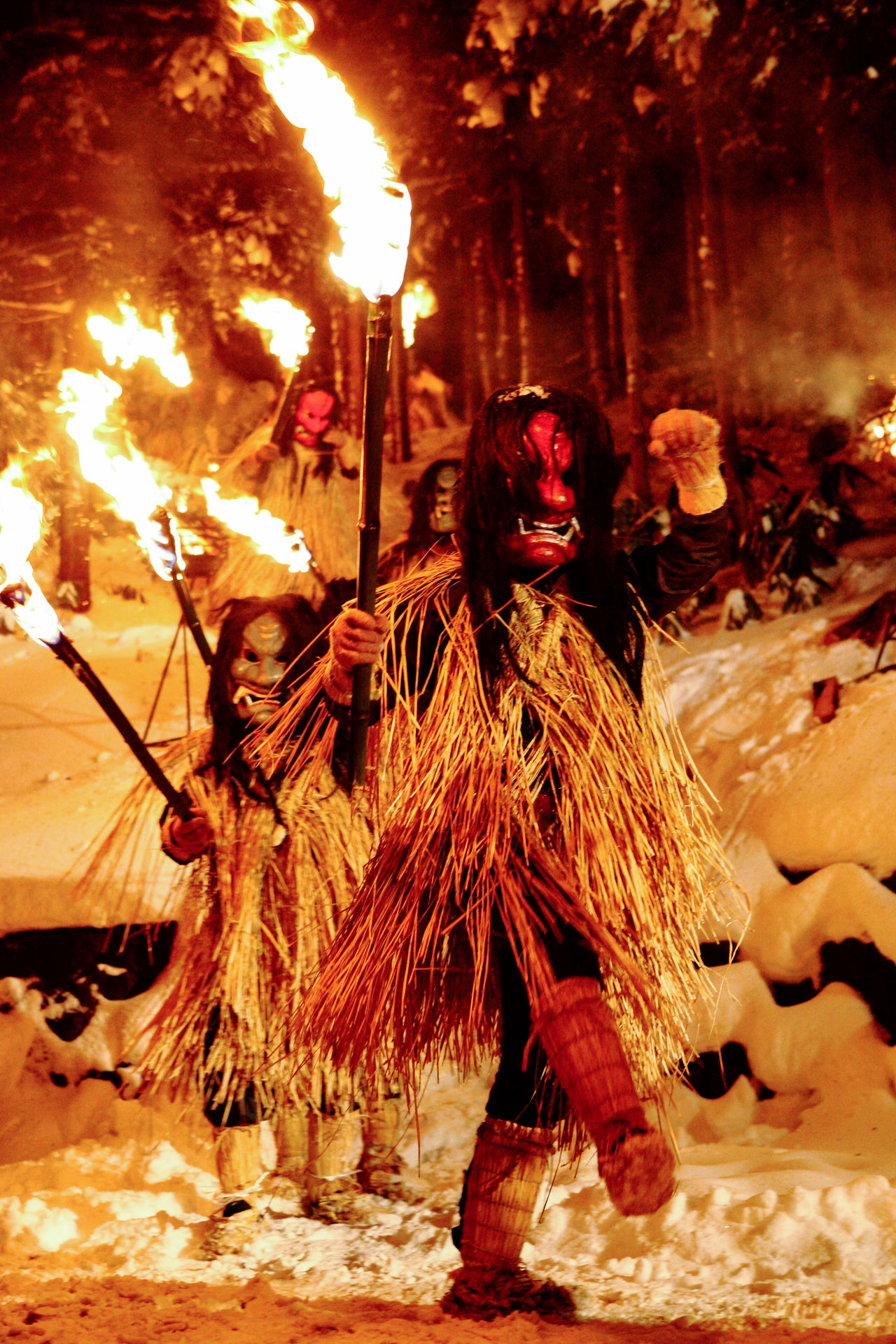 The Namahage Museum near the Shinzan Shrine displays items related to the tradition, and has a large screen showing a video of the namahage on their annual New Year’s Eve rounds of local homes. Next door, in the Oga Shinzan Folklore Museum, visitors can meet namahage face-to-face in a re-created traditional home setting. 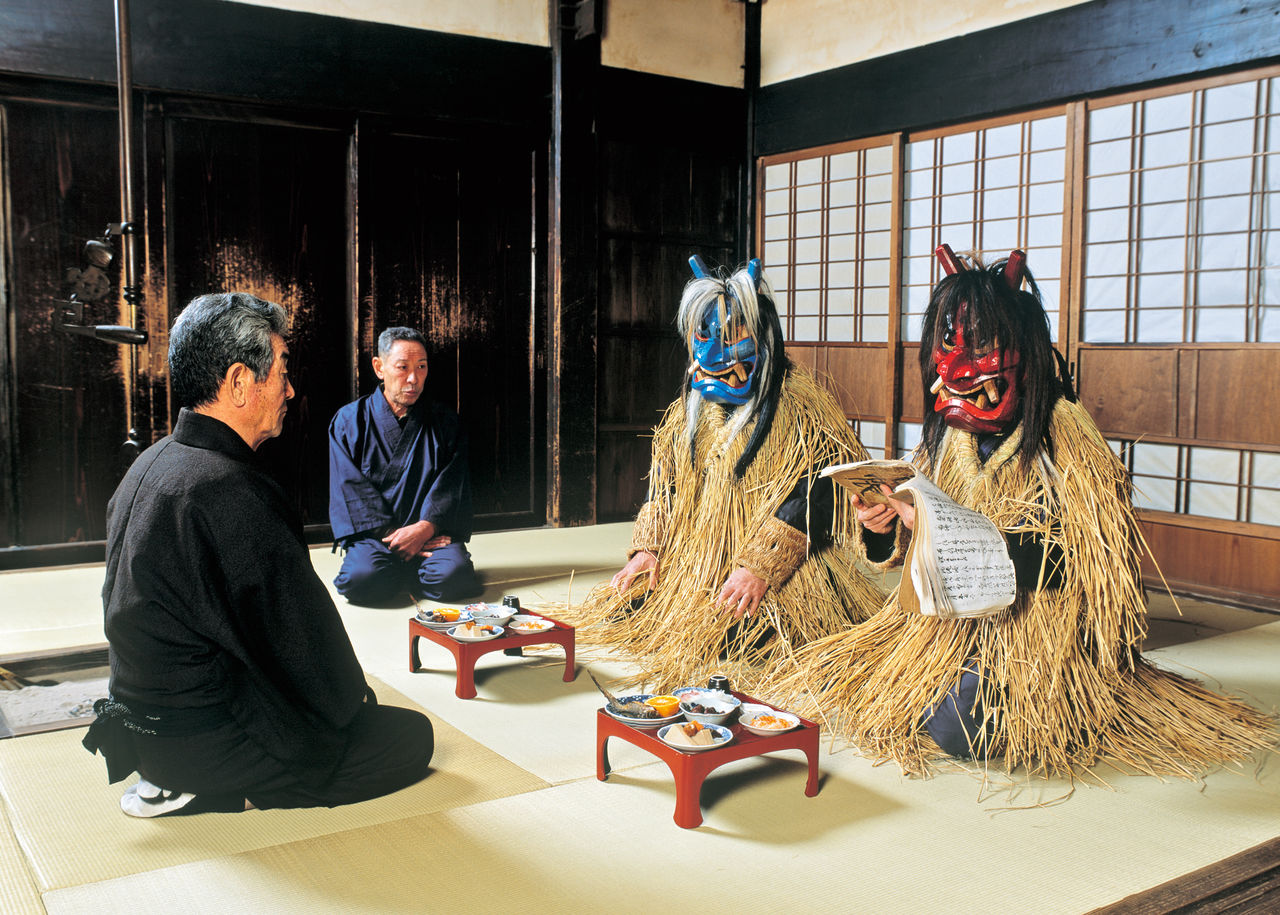 Visitors can meet real namahage at the Oga museum.

The term namahage is believed to come from the word namomi, the name of the rash-like blisters caused by sitting too close to a fire for too long. Namahage refers to peeling away the blisters, the implication being that a person sitting idly by a fire should “peel away” the heat blisters and get working. This seasonal visitor is a frightening and yet humorous deity that compels people to rue their laziness of the past year while at the same time blessing them with good fortune for the new year. 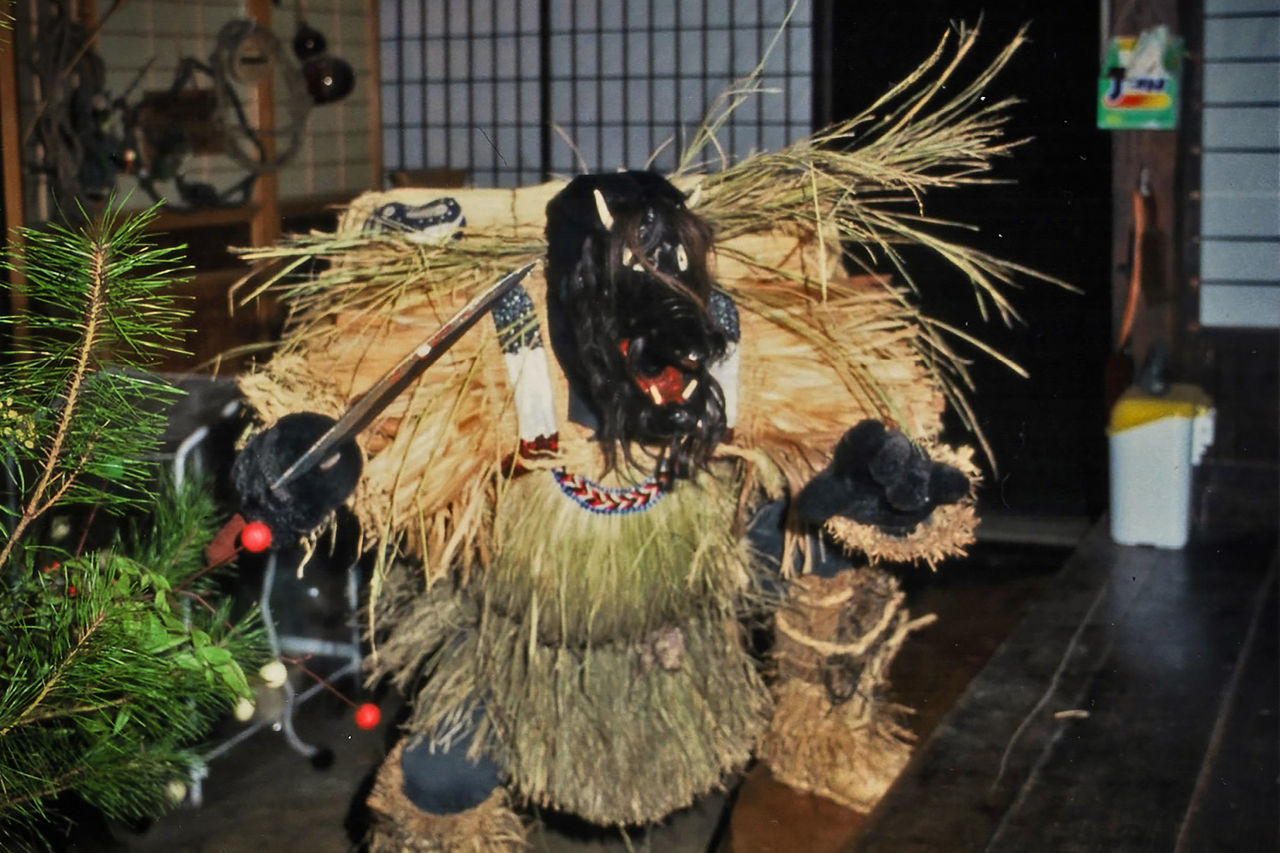 The suneka wear distinctive black masks with a hooked nose. (Photo courtesy of the Ōfunato Board of Education)

The Yoshihama suneka of Ōfunato in Iwate Prefecture are a particularly dreadful Raihō-shin distinguished by their dog-like, demon-like black masks. Every year on Koshōgatsu, the “Little New Year’s” of January 15, the suneka make their rounds in search of lazy people and naughty children.

The term suneka is thought to refer to the peeling of heat blisters from the shins. The straw capes worn by the suneka are embellished with abalone shells gather from the nearby coastline. The rattling of the shells as the suneka make their rounds is a frightening sound for the waiting children. 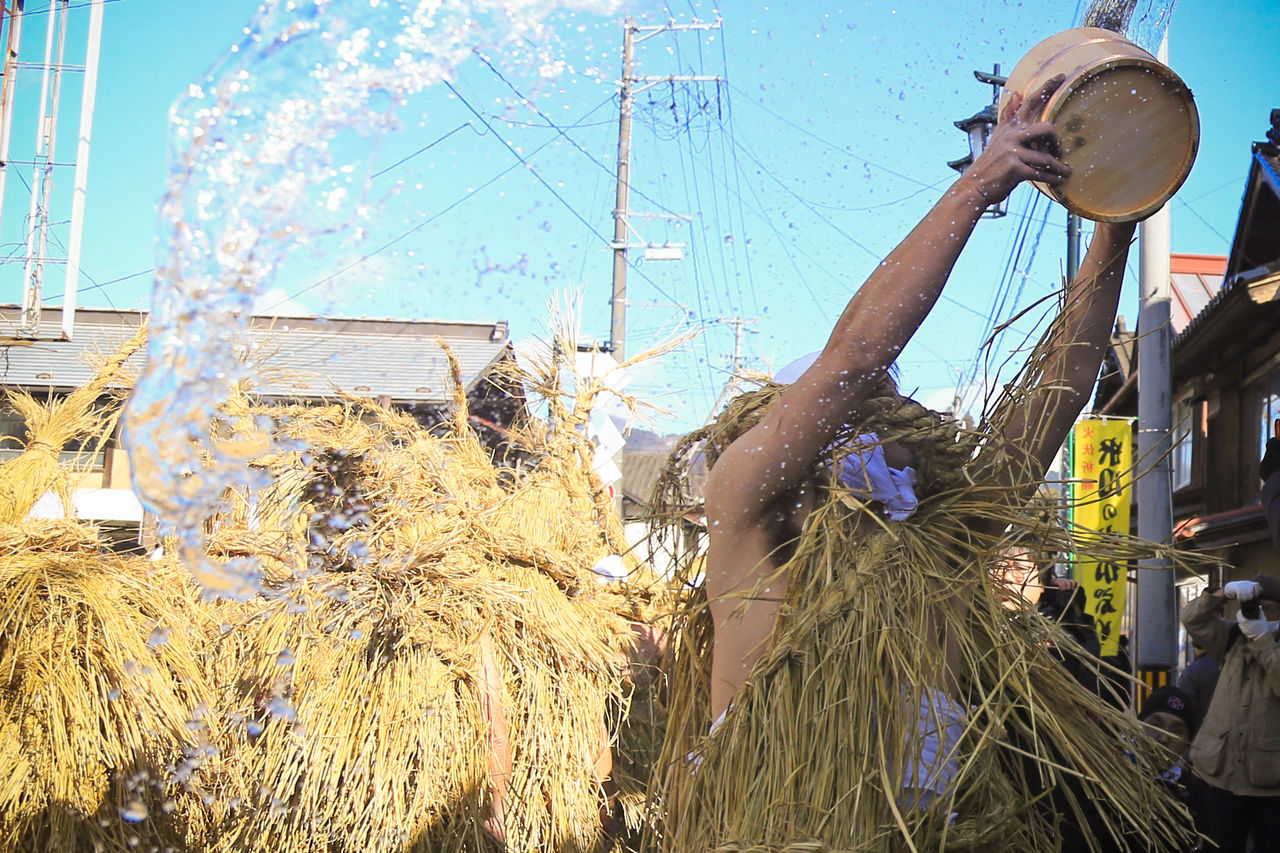 The Yonekawa Mizukaburi Festival is a festival to protect homes from fire that takes place in the Itsukamachi district of Yonekawa in Miyagi Prefecture. Nearly naked men—draped in straw capes, sacred shimenawa ropes looped around their necks, and their faces smeared with soot—make their way through the district, splashing water on themselves and the roofs of the houses they pass.

Tradition has it that there will be a fire if anyone who is not a resident of the district dares to participate in the festival; outsiders are only allowed to watch. The straw capes are thought to provide special protection against fire, and the locals vie with each other to pull out pieces of straw from the capes. Placed on rooftops, these talismans serve as charms to ward off fire. 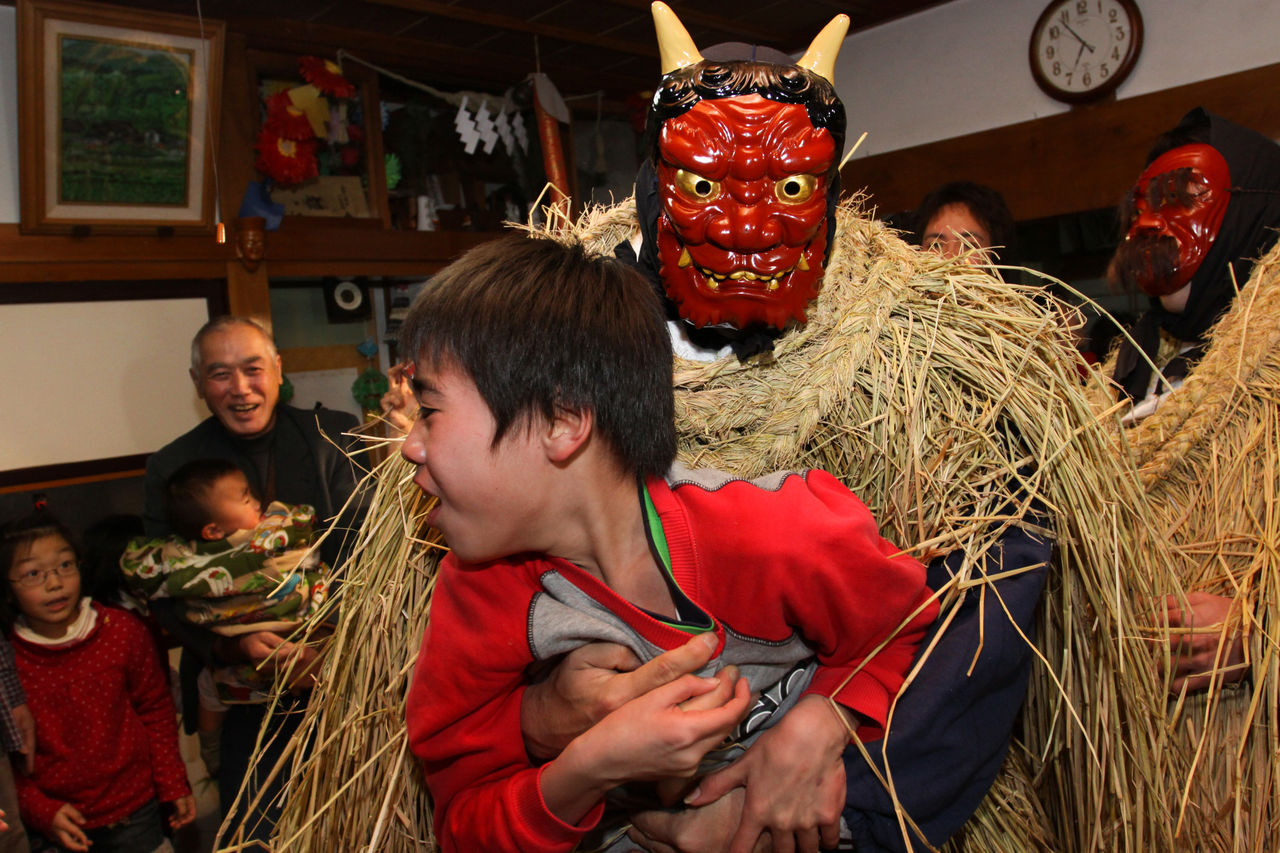 An amahage wearing a fierce mask exhorts a child to be good or else. (Courtesy Yuza Board of Education)

The Yuza Koshōgatsu Festival takes place in three hamlets in the Yamagata Prefecture town of Yuza. The protagonists of the festival are amahage that closely resemble the namahage of Oga but are distinguished by different characteristics for each hamlet. In one, the amahage do not speak but instead make a high keening noise. In another, the amahage make their rounds in menacing silence, while in the third hamlet, it is their strange costumes that scare the children.

Young men transform themselves into the amahage with masks of demons and old men and costumes made of layers of straw known as kendan. They go from house to house to pray for bountiful harvests and protection from disease and disaster.

The raihō-shin are an integral part of traditional local festivals that focus on the home. It is permissible to observe them on their rounds, but do not forget that they are gods on a sacred mission and should by no means be interfered with.

(Originally written in Japanese. Banner photo: Namahage making their way from house to house in the snow. Reporting and text by Shoepress. Photos courtesy of the Oga Tourism and Commerce Division unless otherwise indicated.)