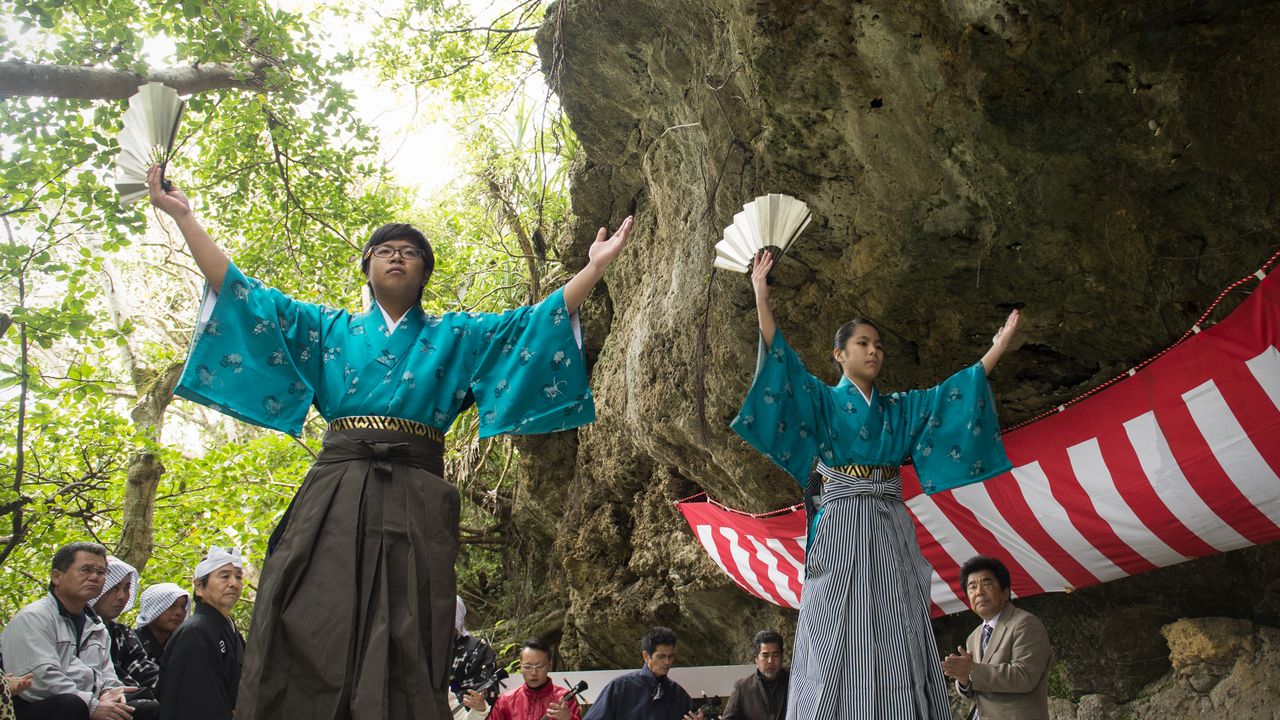 Lunar New Year Ceremonies Live On in the Okinawa Islands

Travel Culture Feb 28, 2019
For some 450 years, the Ryūkyū kingdom traded with Japan, China, and Southeast Asia; their influences contributed to the development of a unique Okinawan culture. Lunar New Year customs are gradually dying out on the main island, but they continue on many of the smaller islands in the Okinawa chain. Kuroiwa Masakazu, a photographer who has made a career of photographing island life, captures images of traditional ceremonies passed down over generations and observed to this day.

Kudakajima is about 5 kilometers east from Cape Chinen, on the southeastern tip of the main island of Okinawa. The small island, just 8 kilometers around, has long been called the “island of the gods,” because this is supposedly where the creation deity of Ryūkyū, Amamikiyo, descended to earth and began establishing a nation. It’s also where a secret ritual called izaihō takes place once every 12 years.

At Lunar New Year, islanders wear formal dress, the national flag flies at the community center, and fishing vessels raise tairyōbata, banners to pray for a plentiful catch. The whole island celebrates the coming of the new year, and everyone heads to the Fukamadun, a sacred spot where the Shakutui ceremony takes place to pray for good health in the coming year. 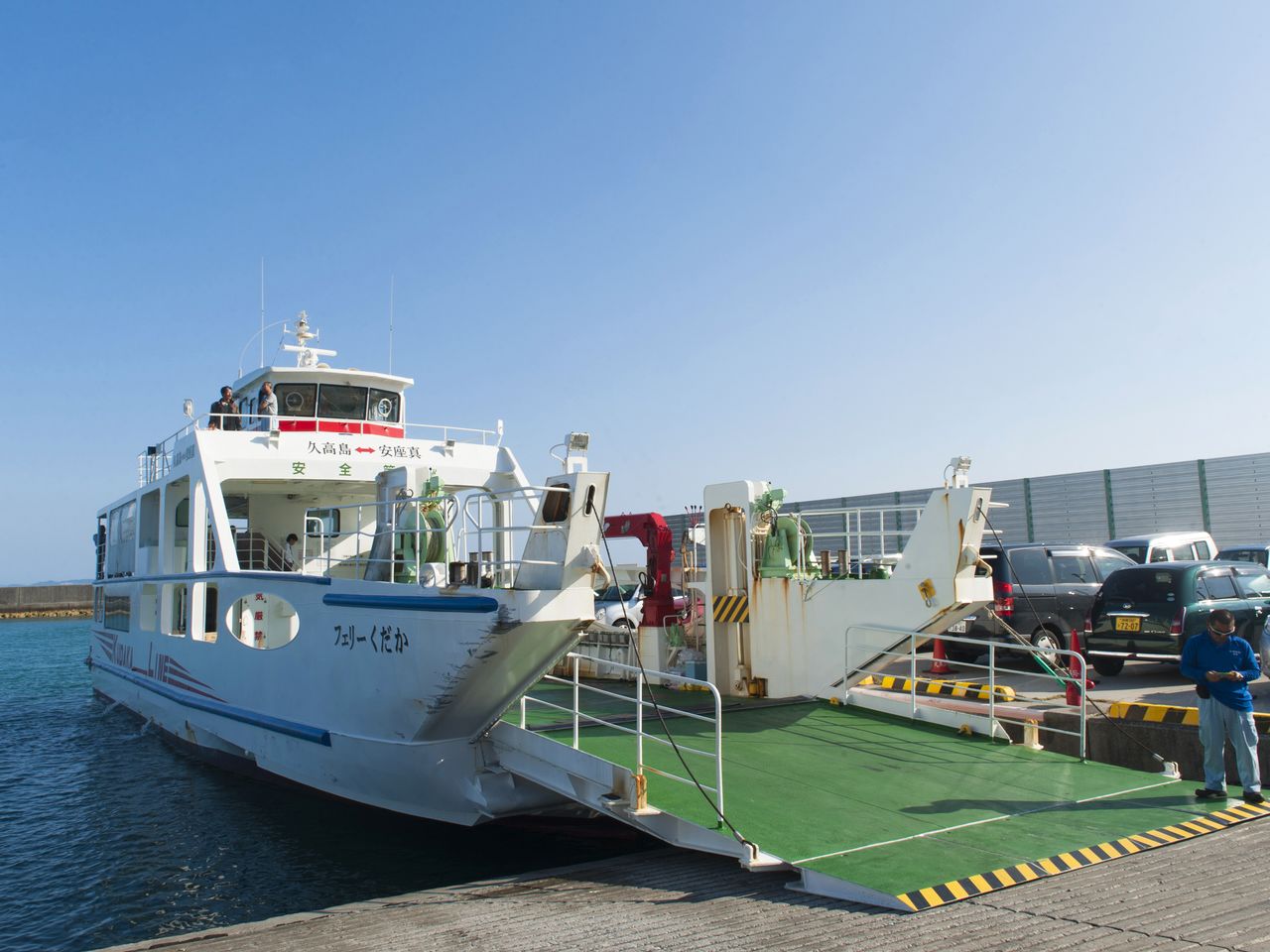 Kudakajima is about 15 minutes away by ferry from Okinawa’s Azama Port. 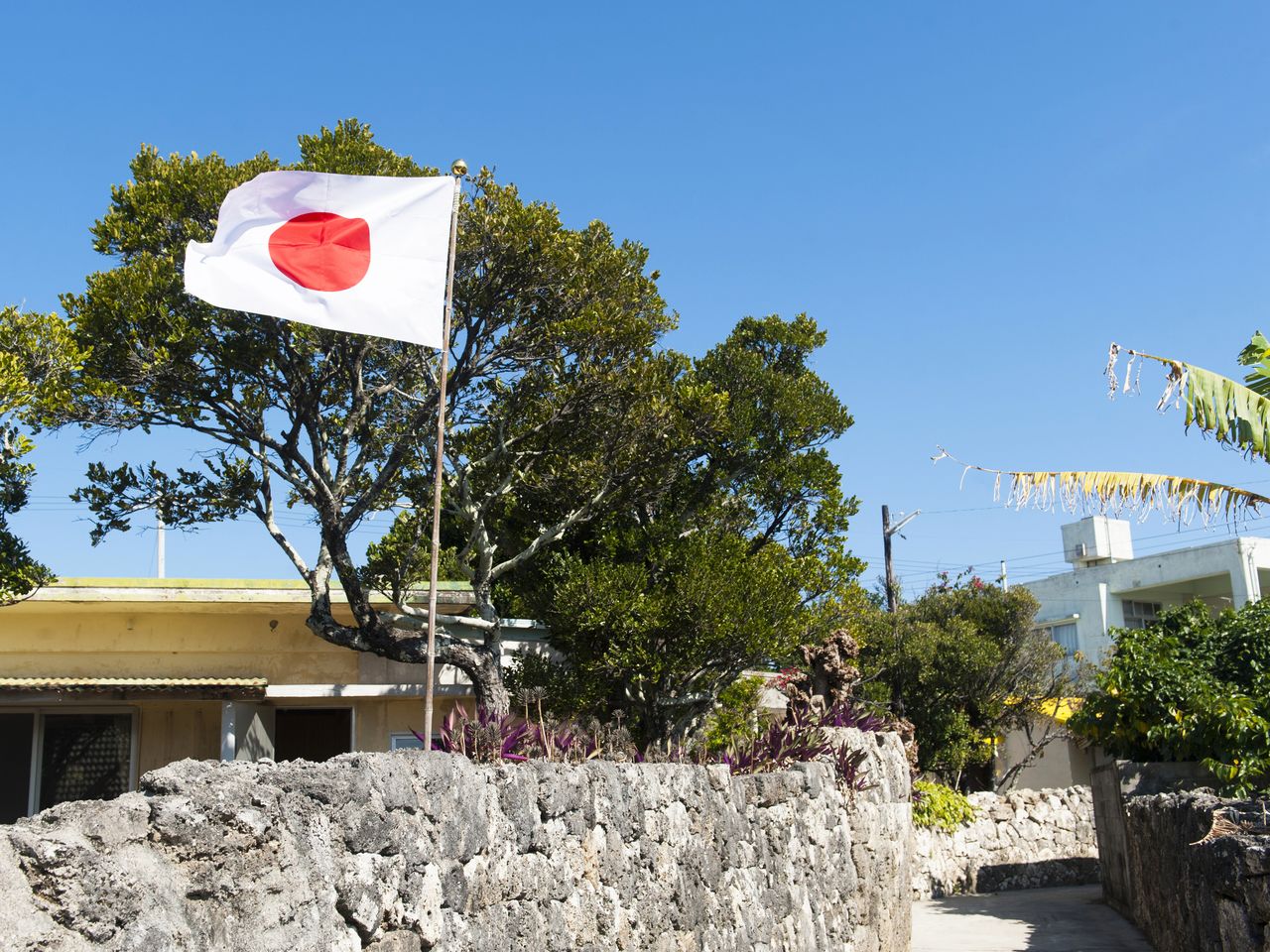 The entire island is decked out for Lunar New Year festivities. 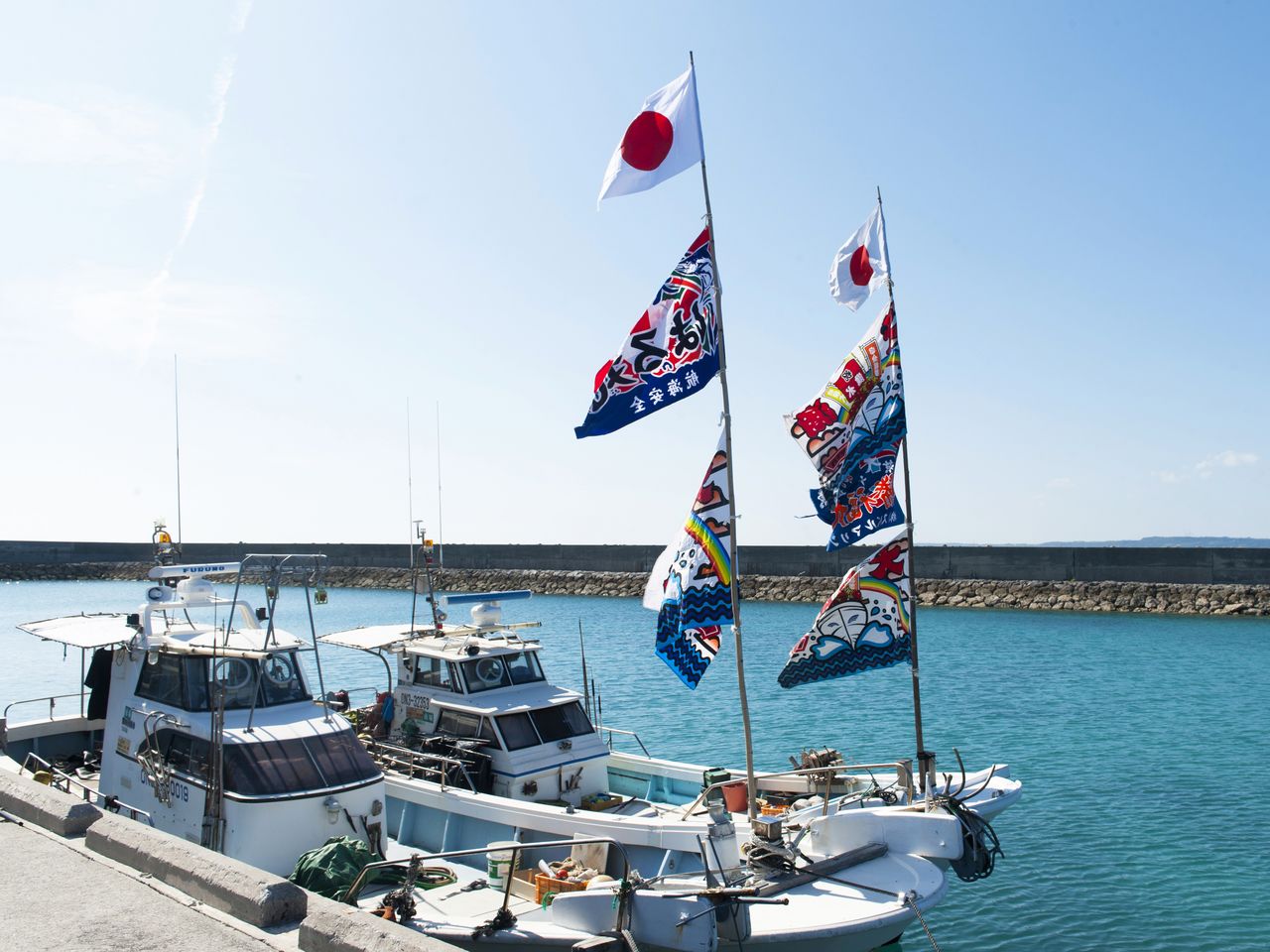 In addition to Fukamadun, the ceremony site, the island has a second sacred site called Udunmyā. For Shakutui, pairs of men climb to one or the other site, where they use ceremonial vessels to exchange sake cups under the gaze of a woman representing the god. Other pairs waiting their turn gather in a tent where they drink sake and catch up with each other. Many islanders who moved away return for the Lunar New Year, and the mound of empty sake bottles only grows higher as the hours pass.

Once the men who have finished performing the Shakutui rite emerge from the sacred site, they express their joy at the coming of the new year by dancing a celebratory Okinawa dance known as kachāshī. Several others join in as the atmosphere becomes more fevered, and in the end the dance circle resembles a joyful melee. 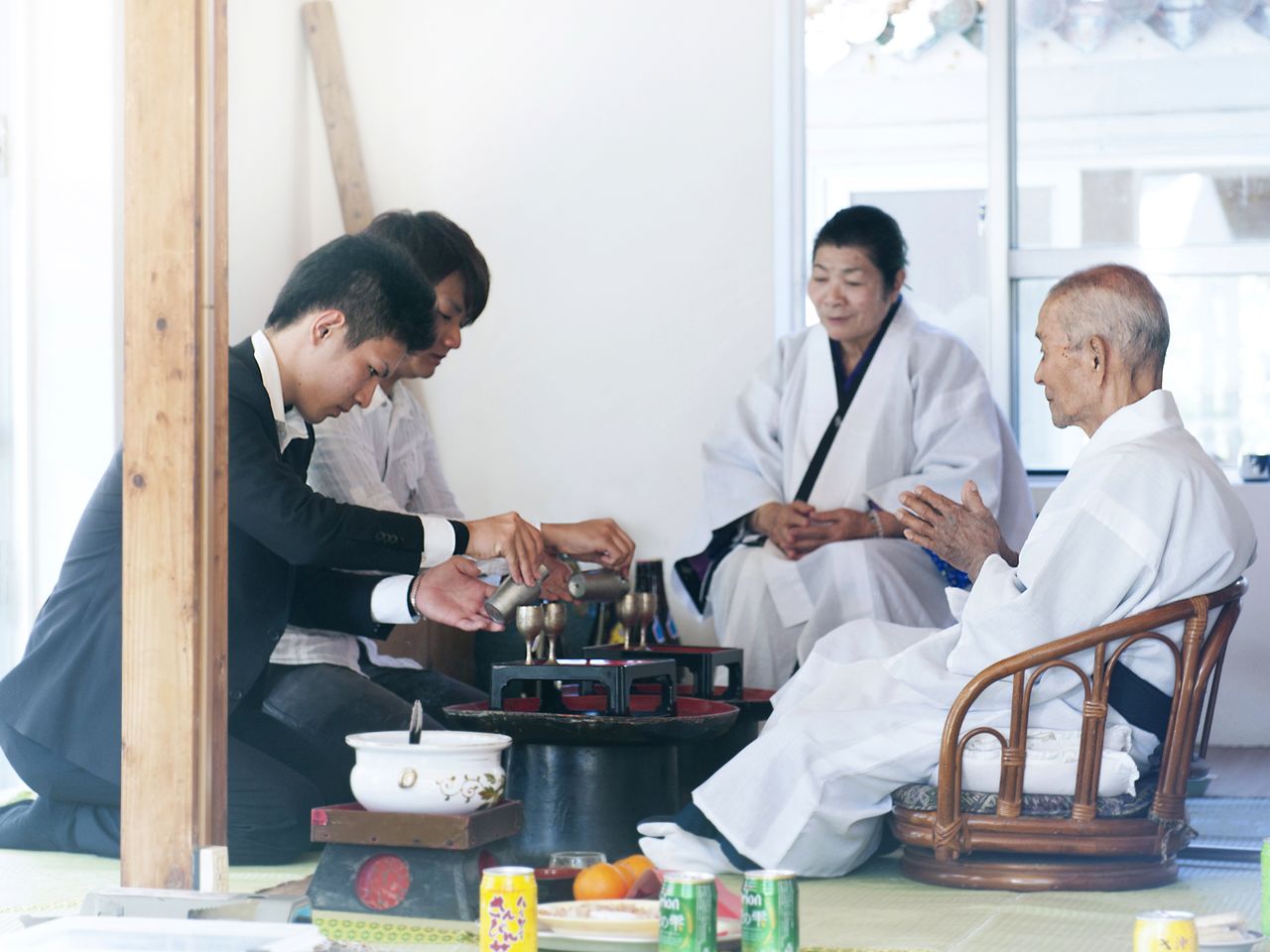 The Shakutui ritual, carried out by men in pairs, takes place in a solemn atmosphere. 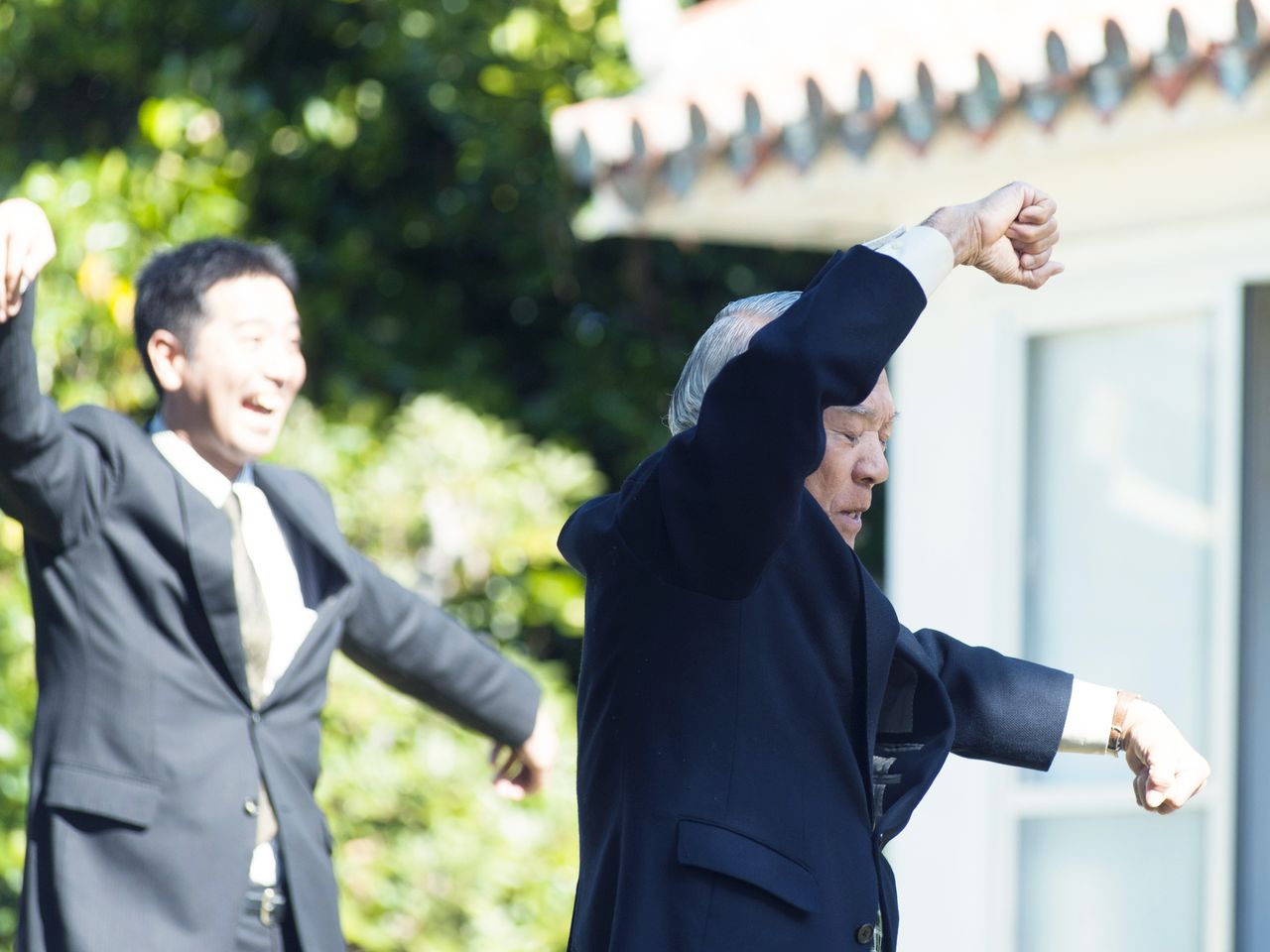 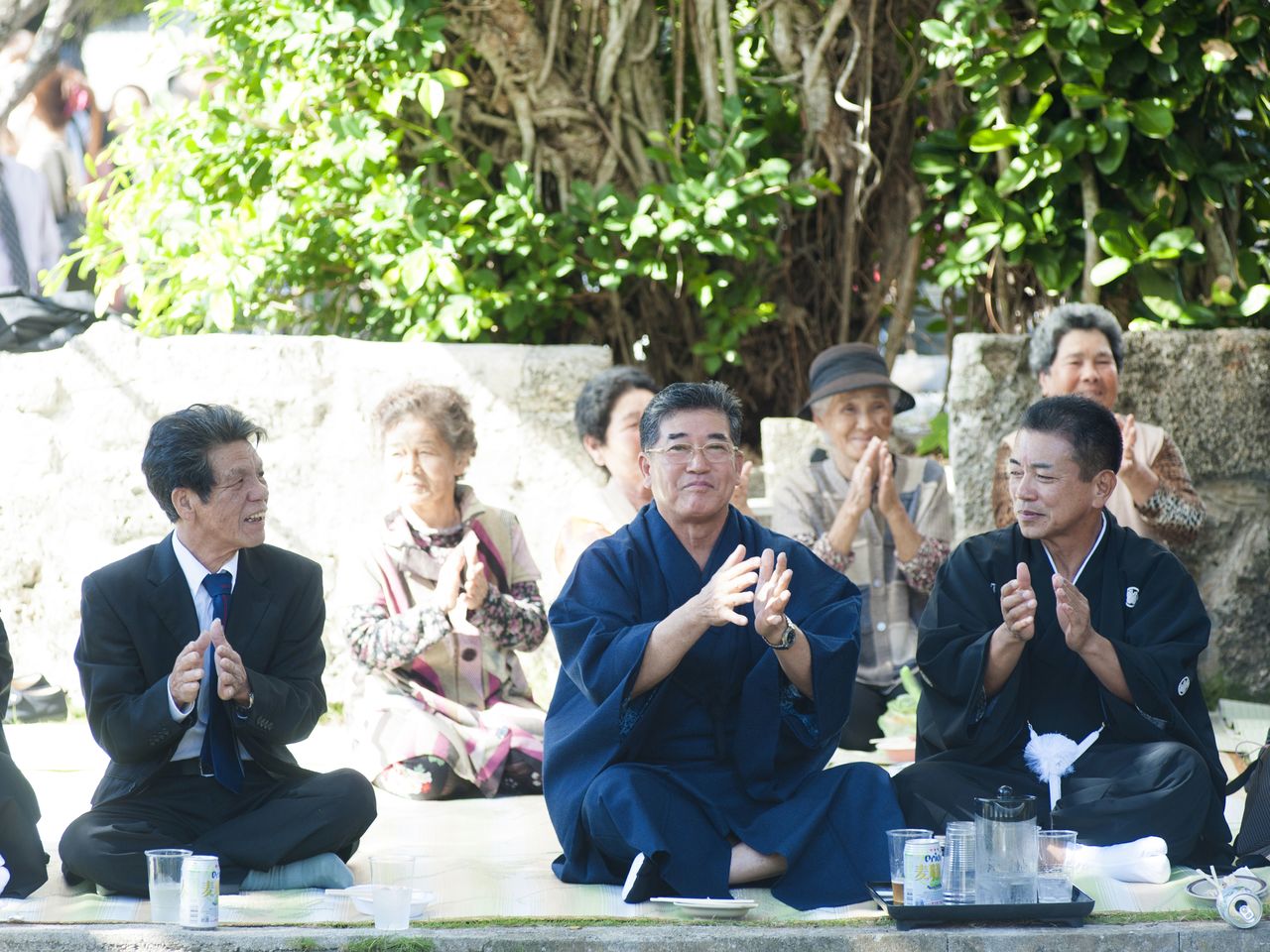 A group gathered nearby offers rhythmical clapping to accompany the kachāshī. 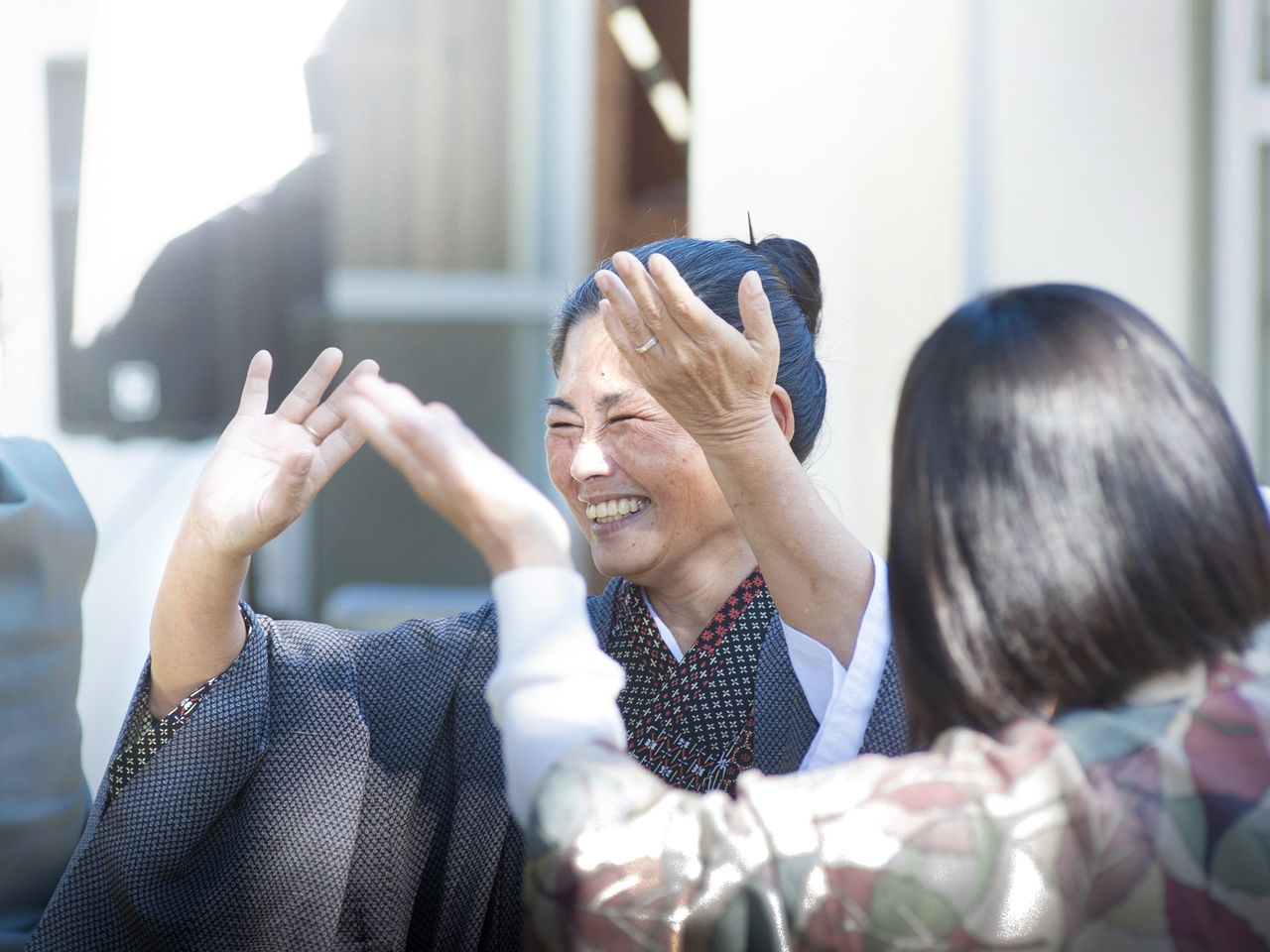 The cave where the male and female god resided, which shares the name Shirumichū with the male deity, is atop a small hill in the island’s south. The gods are said to have procreated at this sacred site, and praying to the stalactites in the cave will supposedly bless one with children. The cave is usually closed off to visitors but is open for Lunar New Year. Prayers, music, and dancing are offered at the cave entrance. 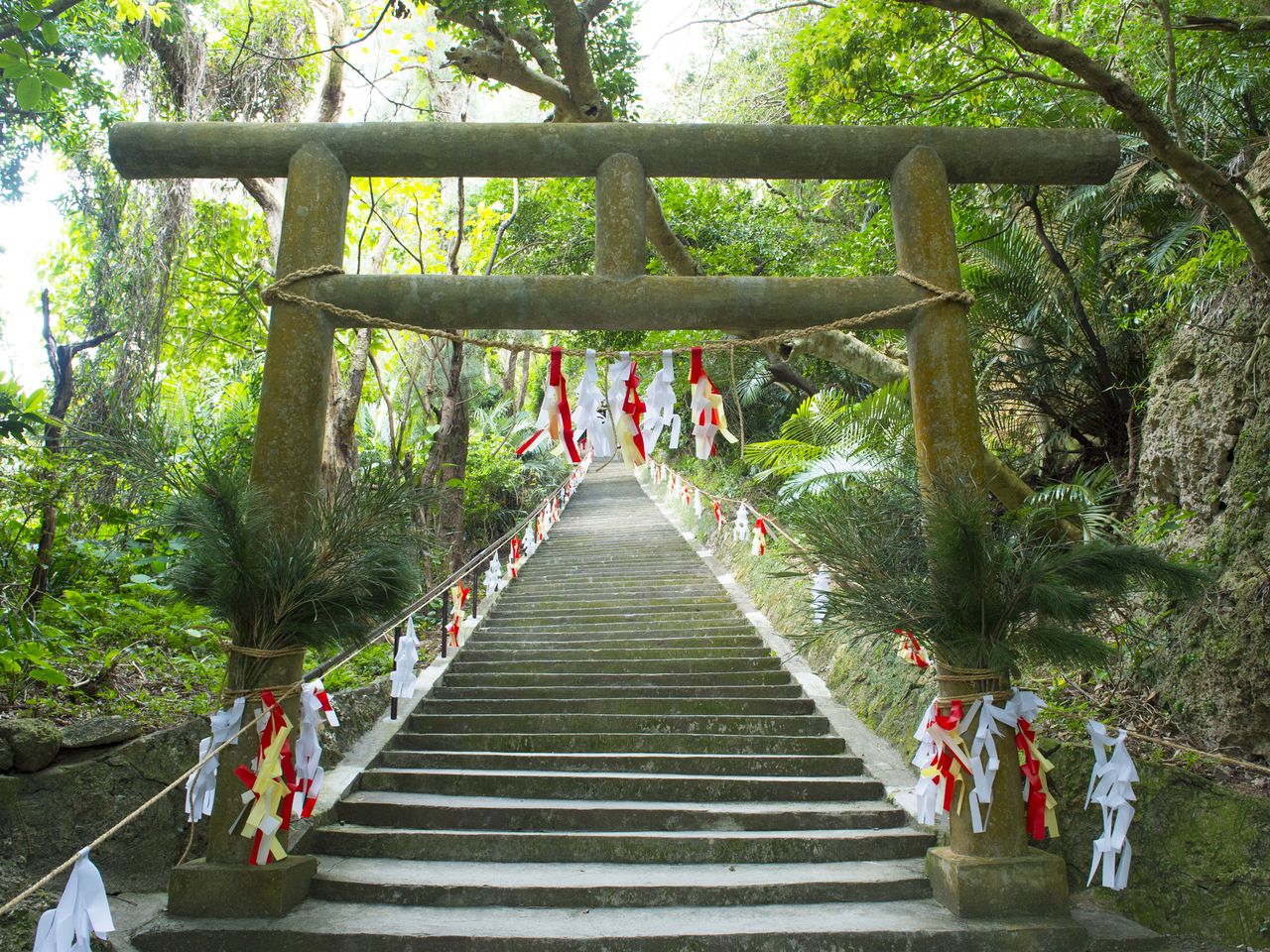 The Shirumichū sacred spot is at the top of these steps, whose entrance is marked by a torii gate. 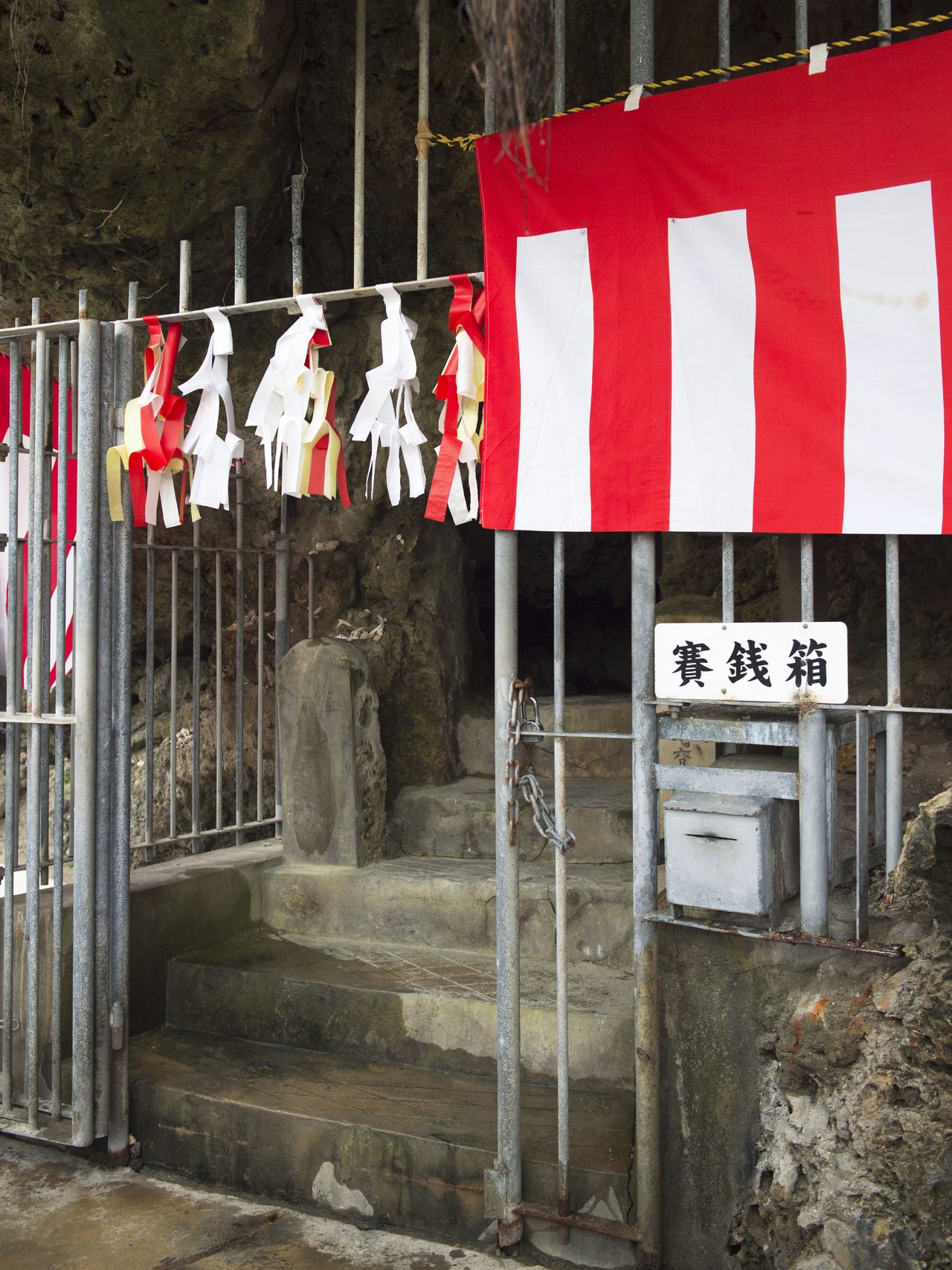 The entrance to the cave is usually closed, but people can enter for Lunar New Year ceremonies. 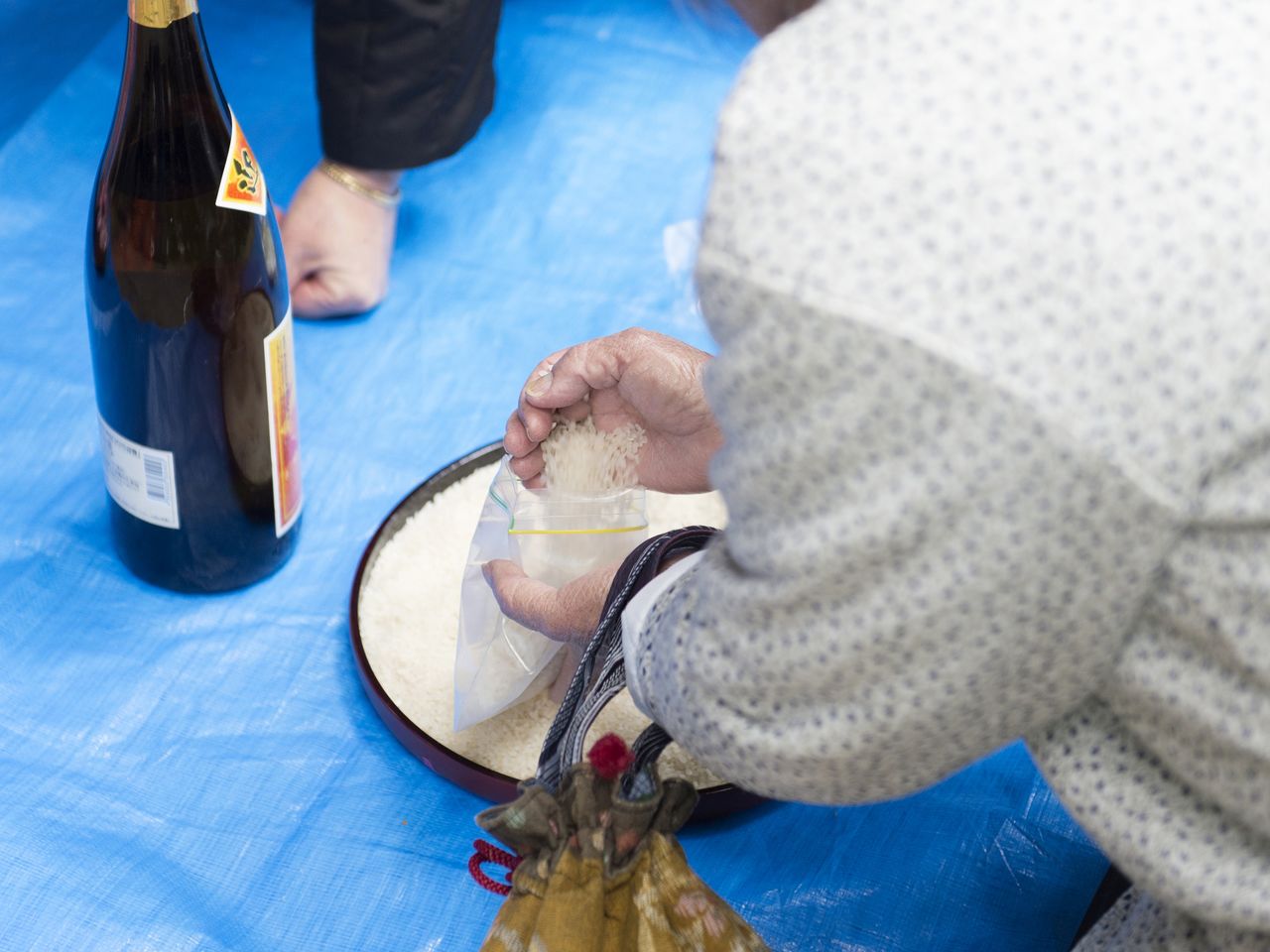 Placing an offering of rice on one’s head supposedly ensures good health. Many people take some of the rice used in the ceremony home with them.

As part of New Year prayers, the village’s priestess makes an offering of rice and sweets, and those assembled pray for a year of prosperity. Next, traditional Okinawan music is played on the sanshin, the Okinawa version of the shamisen, drums, and flute, and ritual dances are performed. The bright tone of the sanshin playing the final tune brings everyone to their feet for the kachāshī. 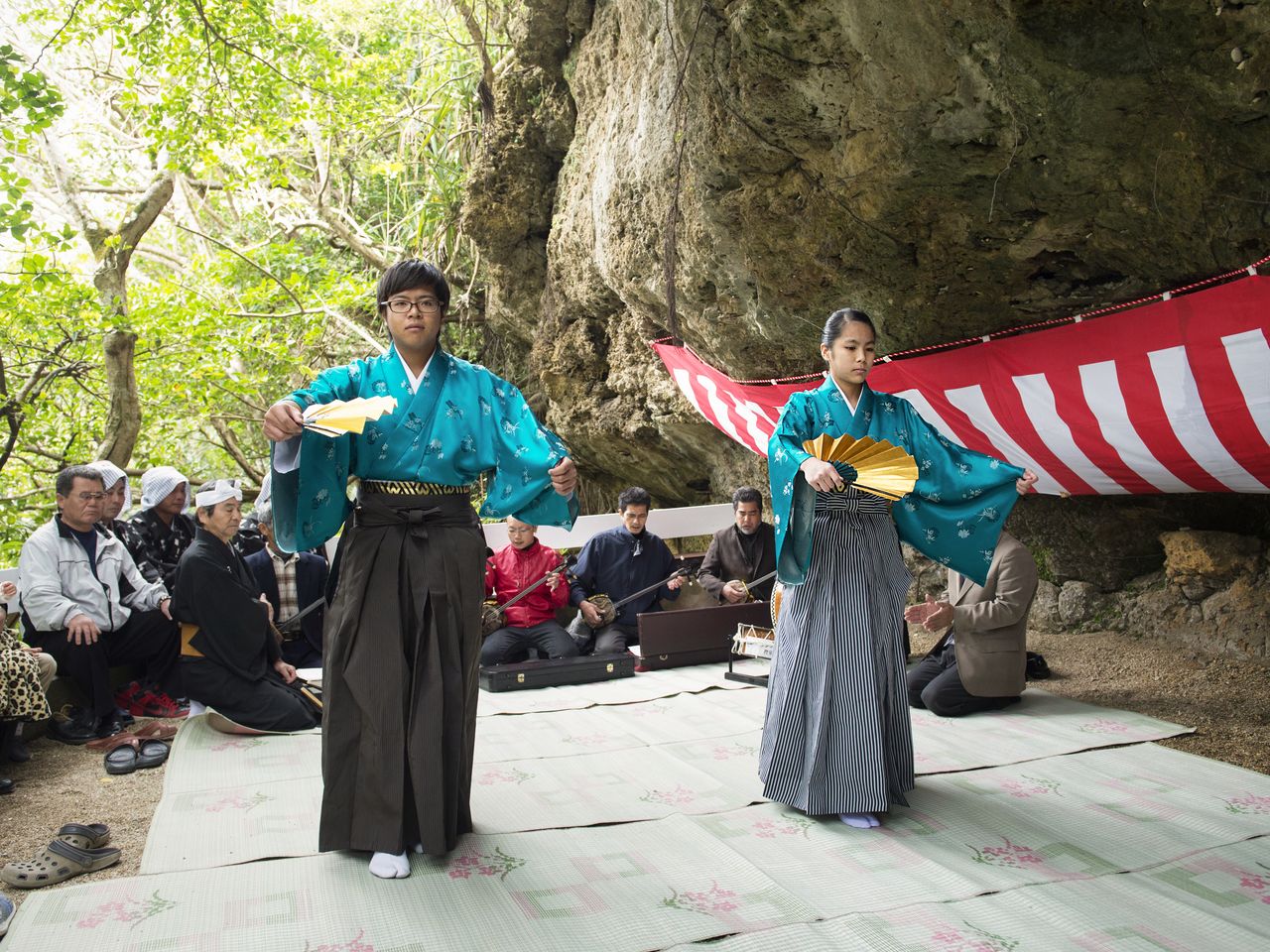 After New Year prayers, a celebratory dance is performed. 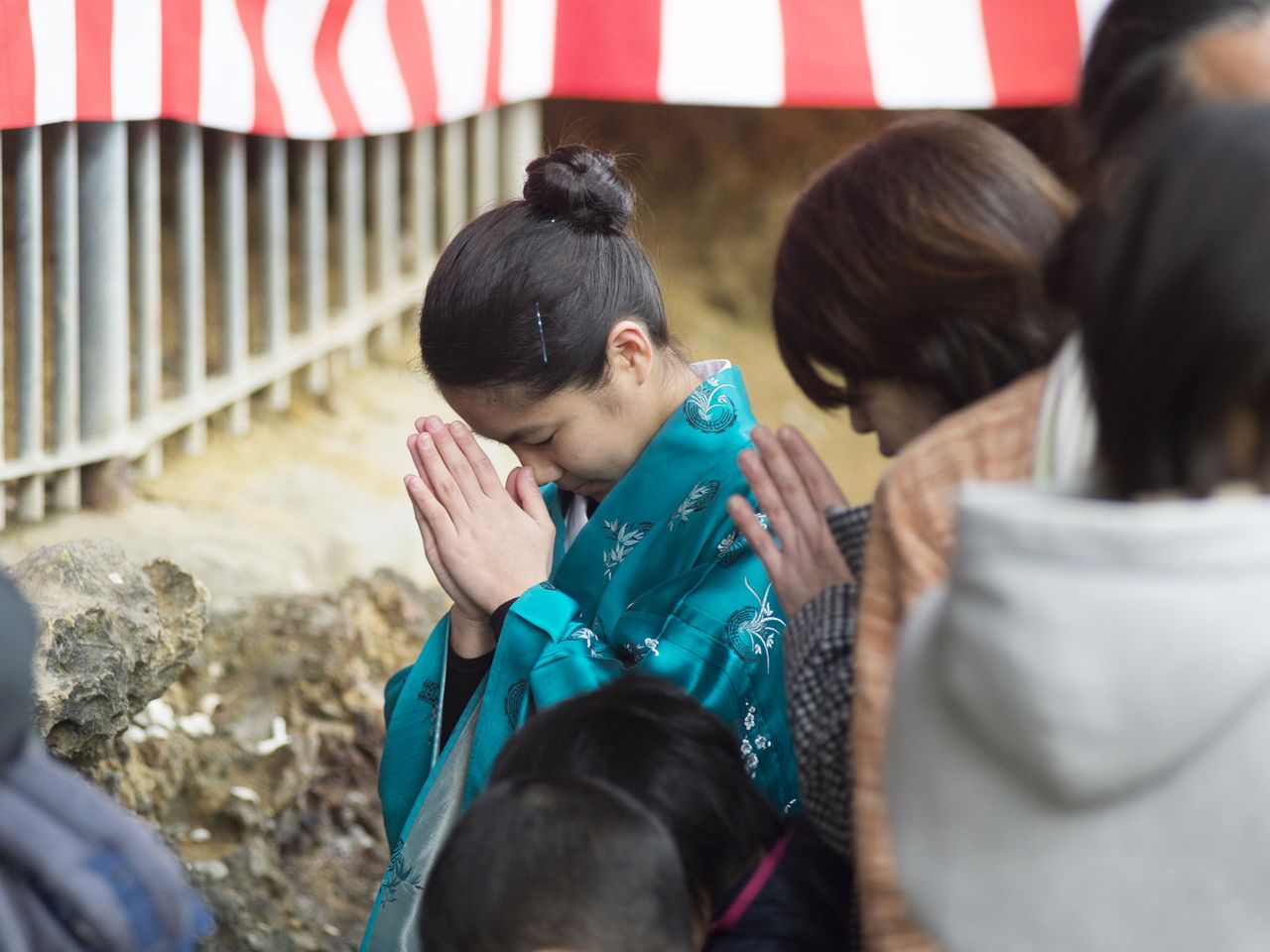 Facing the Shirumichū, people give thanks for the new year. 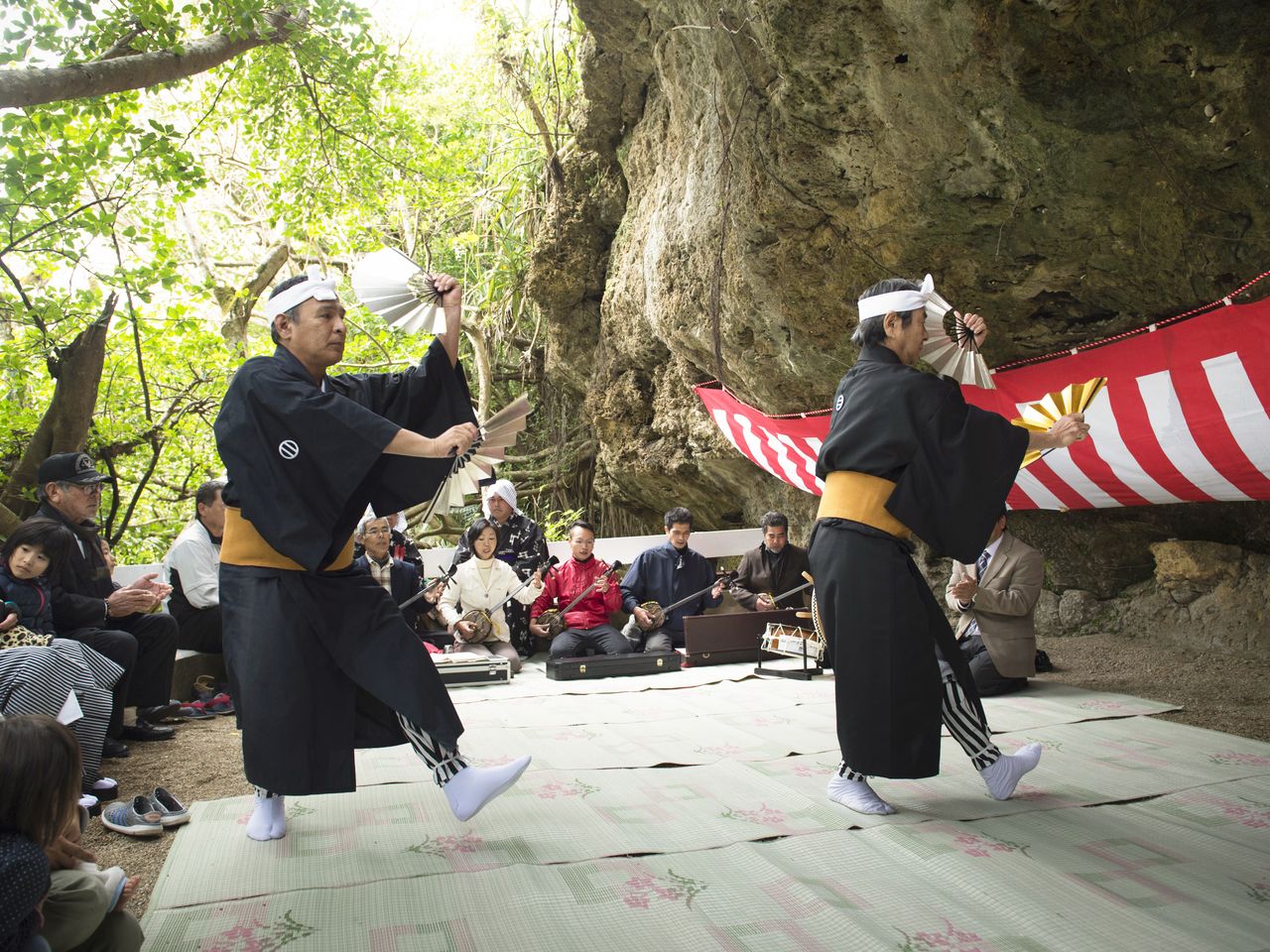 Dancers performing with fans add to the festive atmosphere. 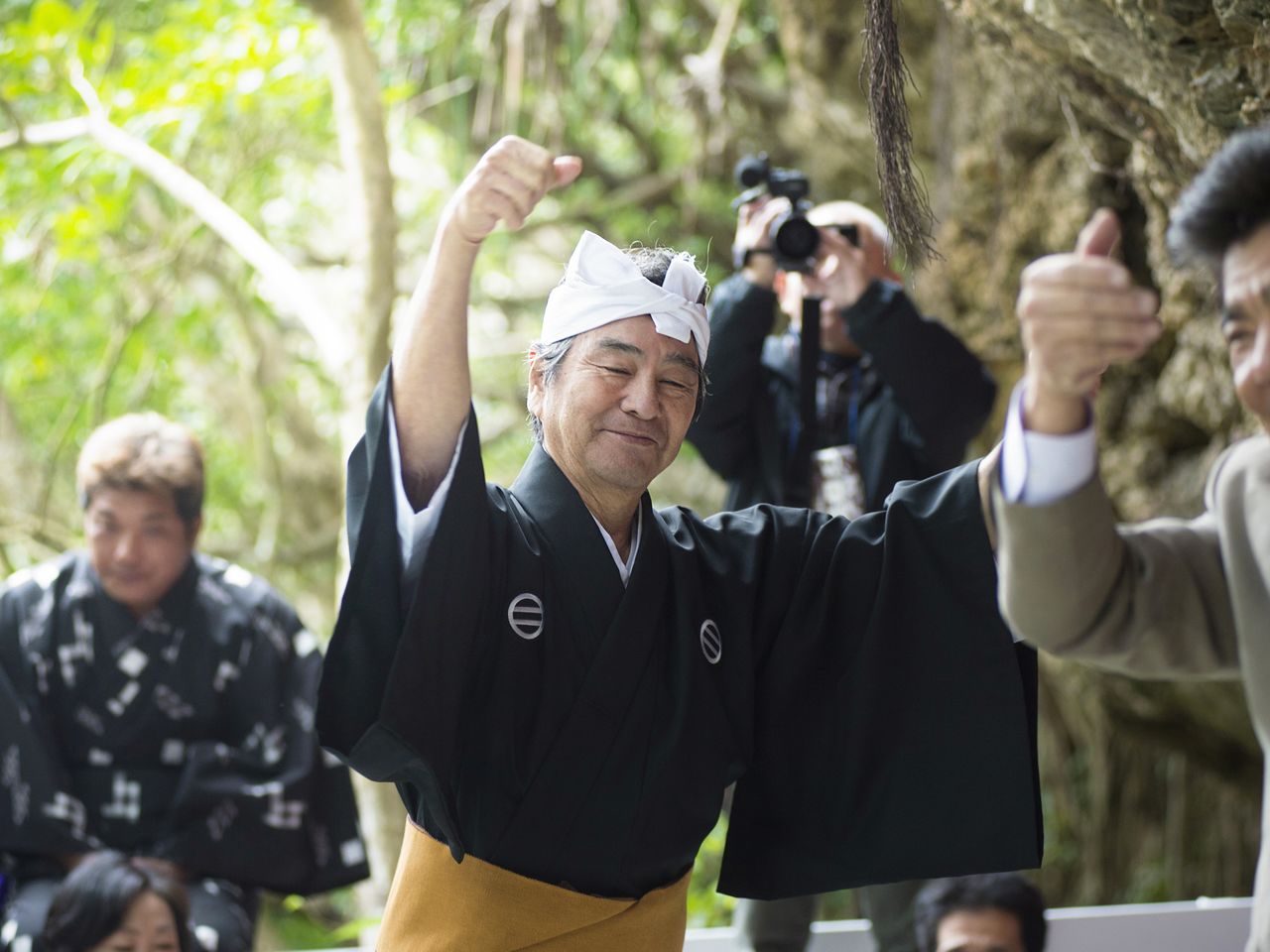 Dancing the kachāshī to sanshin music after offerings have been performed.

Livestock raising is an important part of life on Kuroshima, where cattle are said to outnumber inhabitants more than ten to one. For the Lunar New Year, the two villages on the island celebrate with the Tsunanumin ceremony and a great tug-of-war, rituals that come from the island of Ishigaki to the northeast, where they are carried out as part of the summer harvest festival.

In the village of Agarisuji, bells announce the start of the festivities early in the afternoon, and villagers clad in happi coats, called sudina locally, start assembling in front of the island’s traditional arts center. The group splits up into north and south teams which sing call-and-response yunta, folksongs from the Okinawa islands’ Yaeyama region, as a prelude to the Tsunanumin. 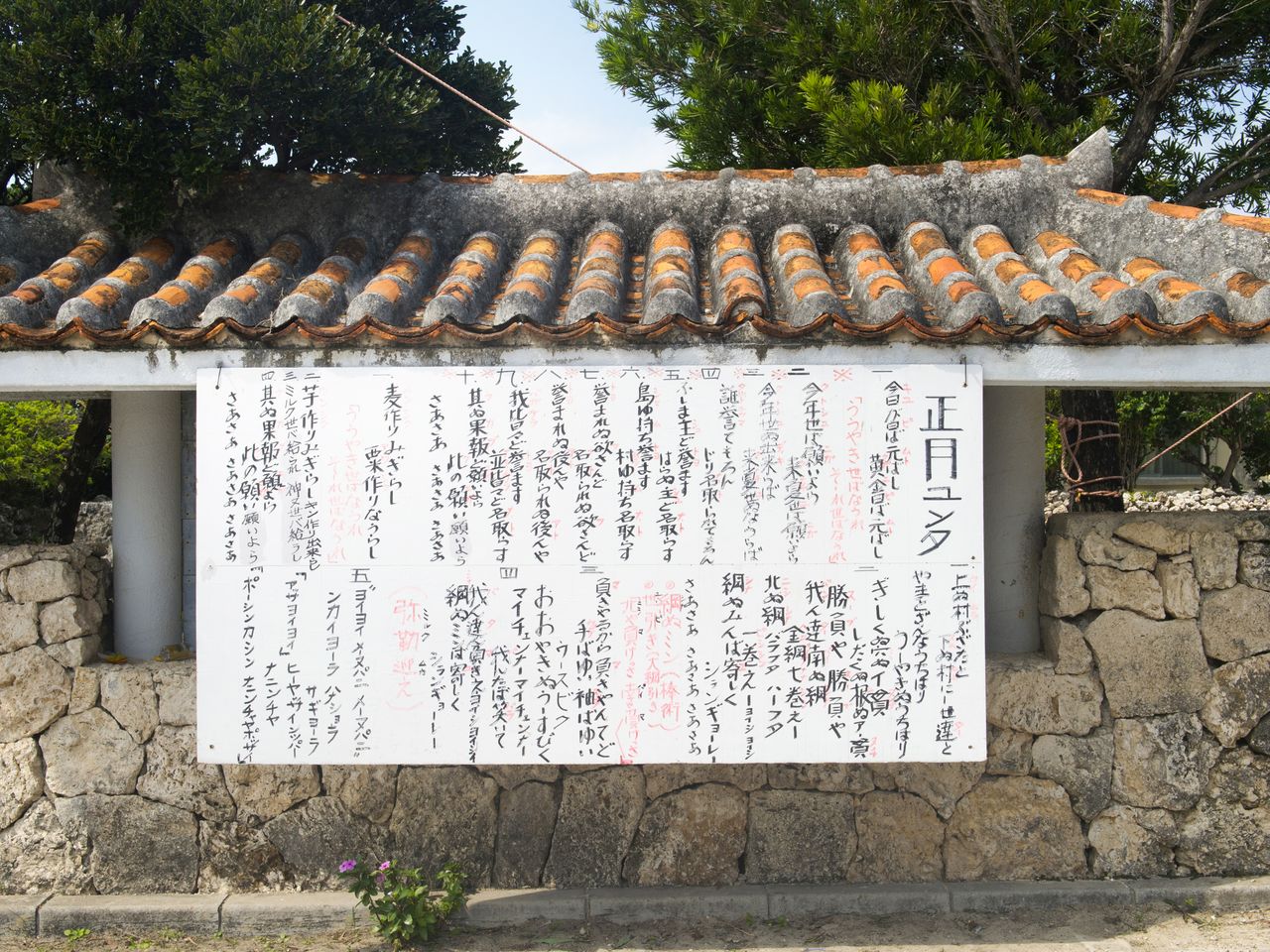 The lyrics to the New Year yunta are prominently displayed in front of the island’s traditional arts center. 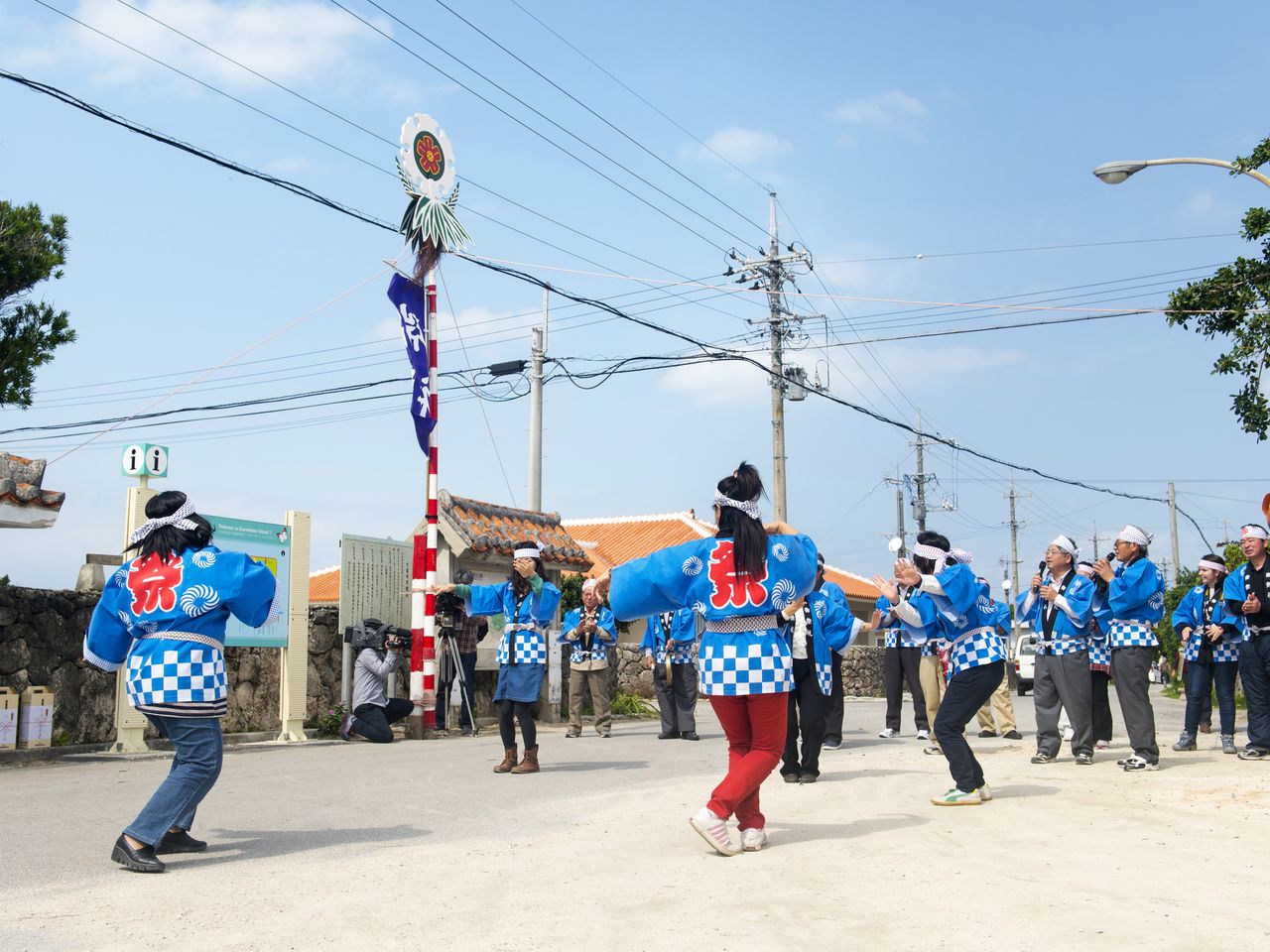 In a 2015 photo, people in a parade sing the yunta. The community acquired new sudina costumes for the festivities in autumn 2018.

In the Tsunanumin ritual, two warrior figures appear on floats borne by young men, one from the south carrying a spear and the other from the north with a sickle. Striking menacing poses and glaring at the crowds, the warriors advance and their floats ram each other. The mock battle that ensues is a thrilling spectacle. 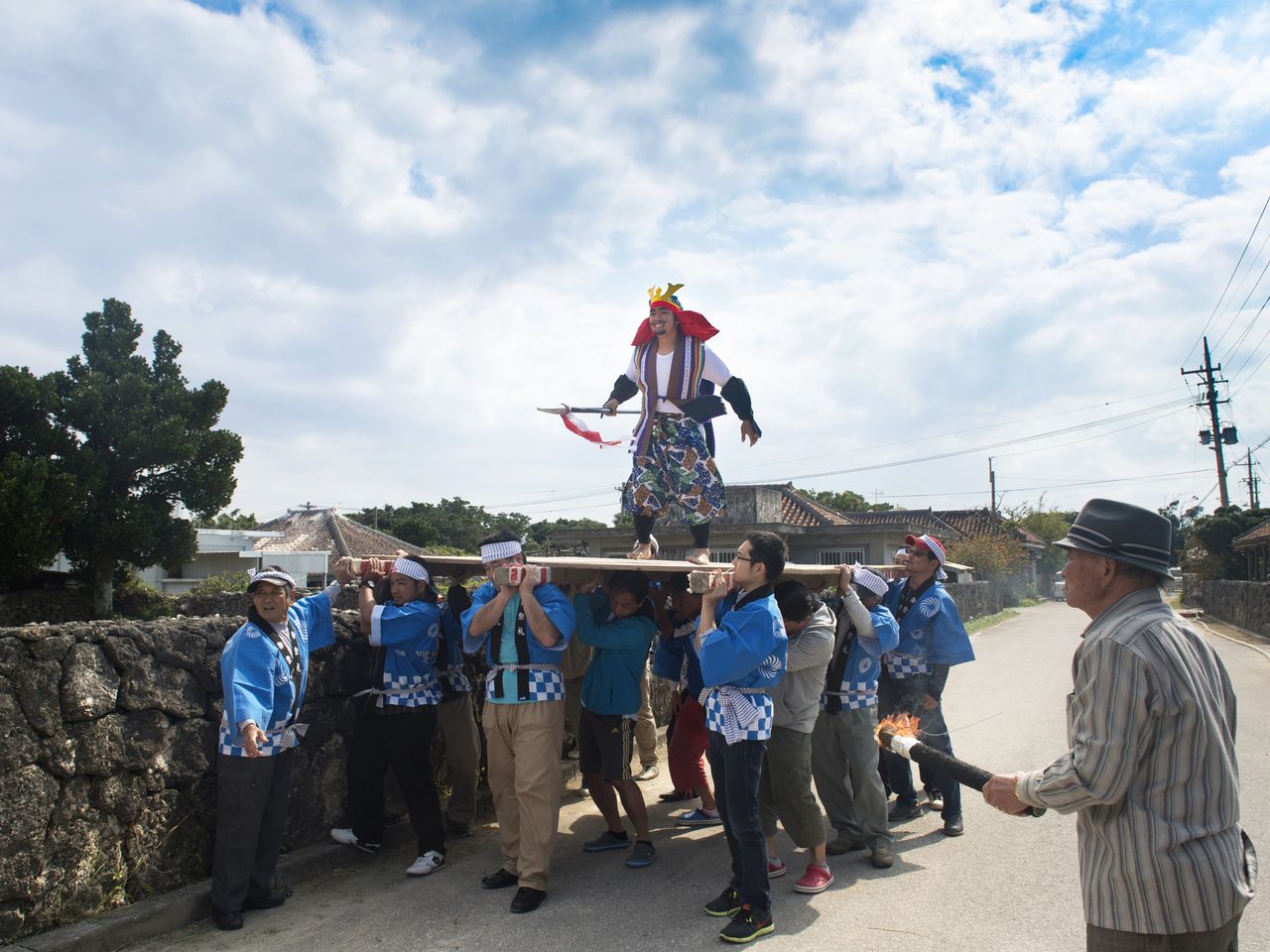 A spear-carrying warrior appears from the south, riding on a float borne aloft by young men. 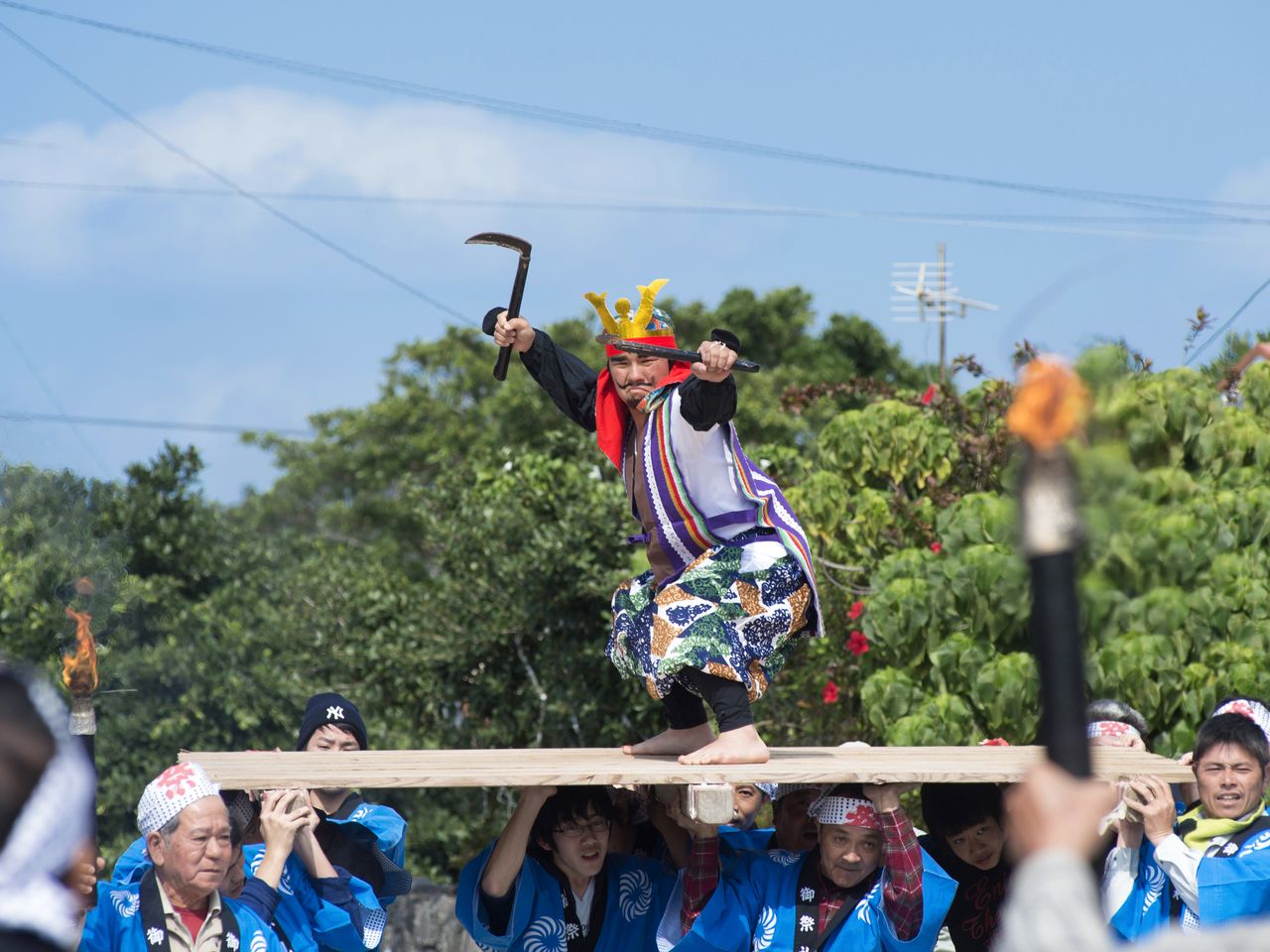 The warrior from the north, brandishing a sickle, strikes a threatening pose. 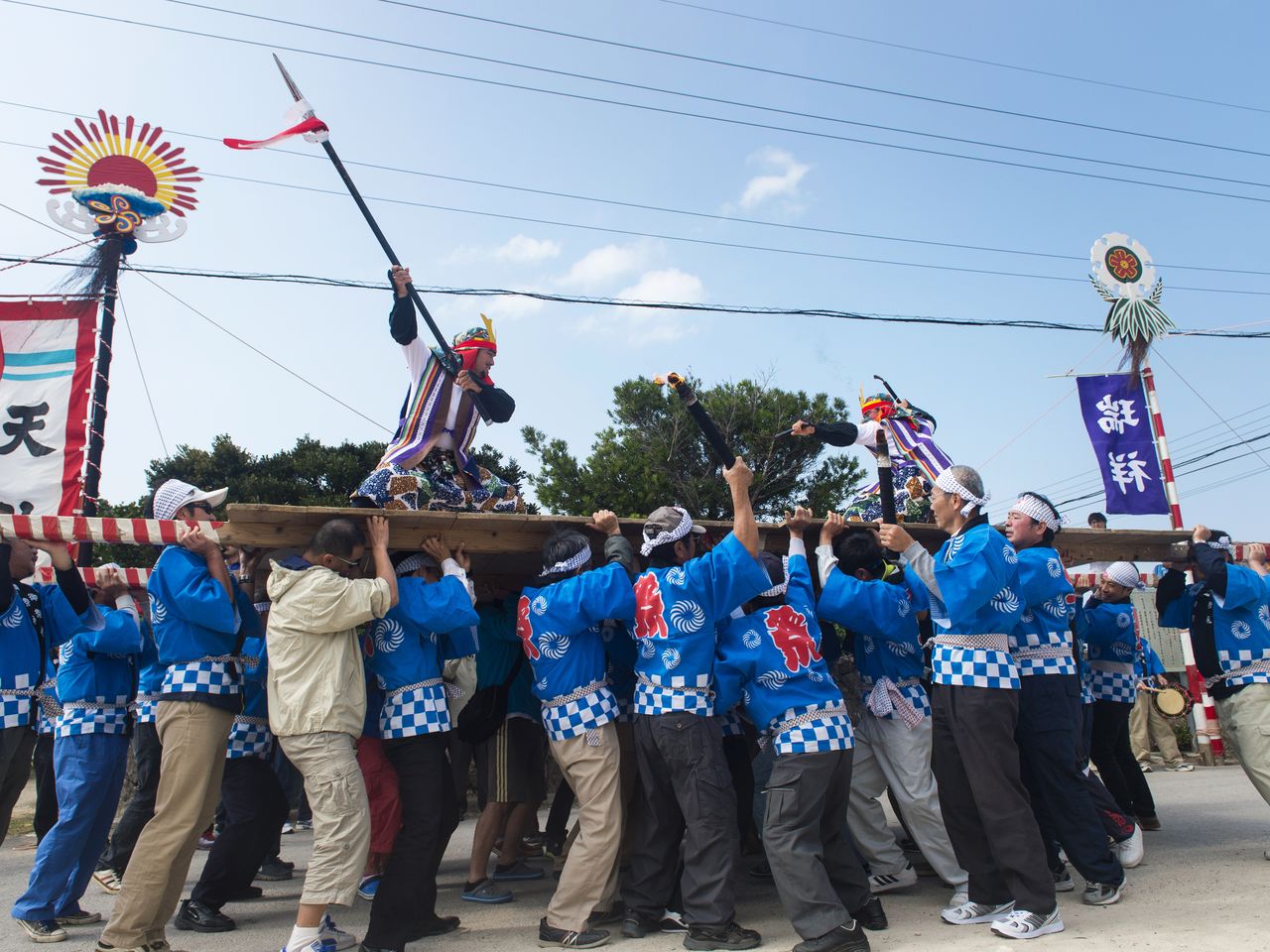 The floats collide, setting off a vigorous tussle.

Next is the tug-of-war, with everyone participating. In past years, a win by the south side was preferred, but nowadays both sides pull equally vigorously. A win by the north means prosperity for livestock raising and a win by the south presages a bountiful harvest. On other islands, where fishing is a mainstay occupation, a win by the north would mean rich catches, but on Kuroshima this has been adapted to reflect the importance of livestock to the island. The festivities reach a peak with the appearance of Miruku-sama, the deity bringing rich harvests and prosperity. 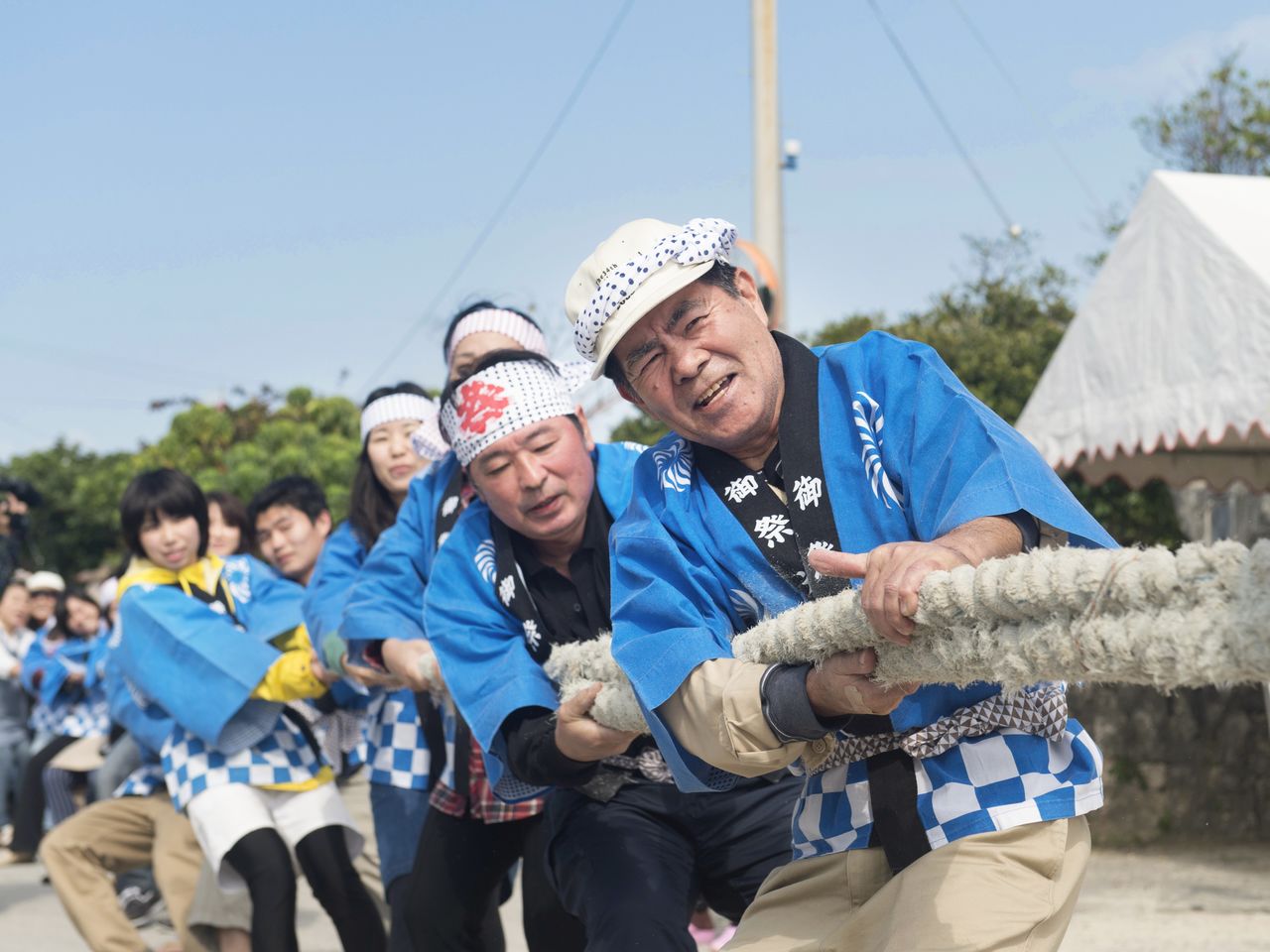 Participants put their backs into the north-south tug of war. 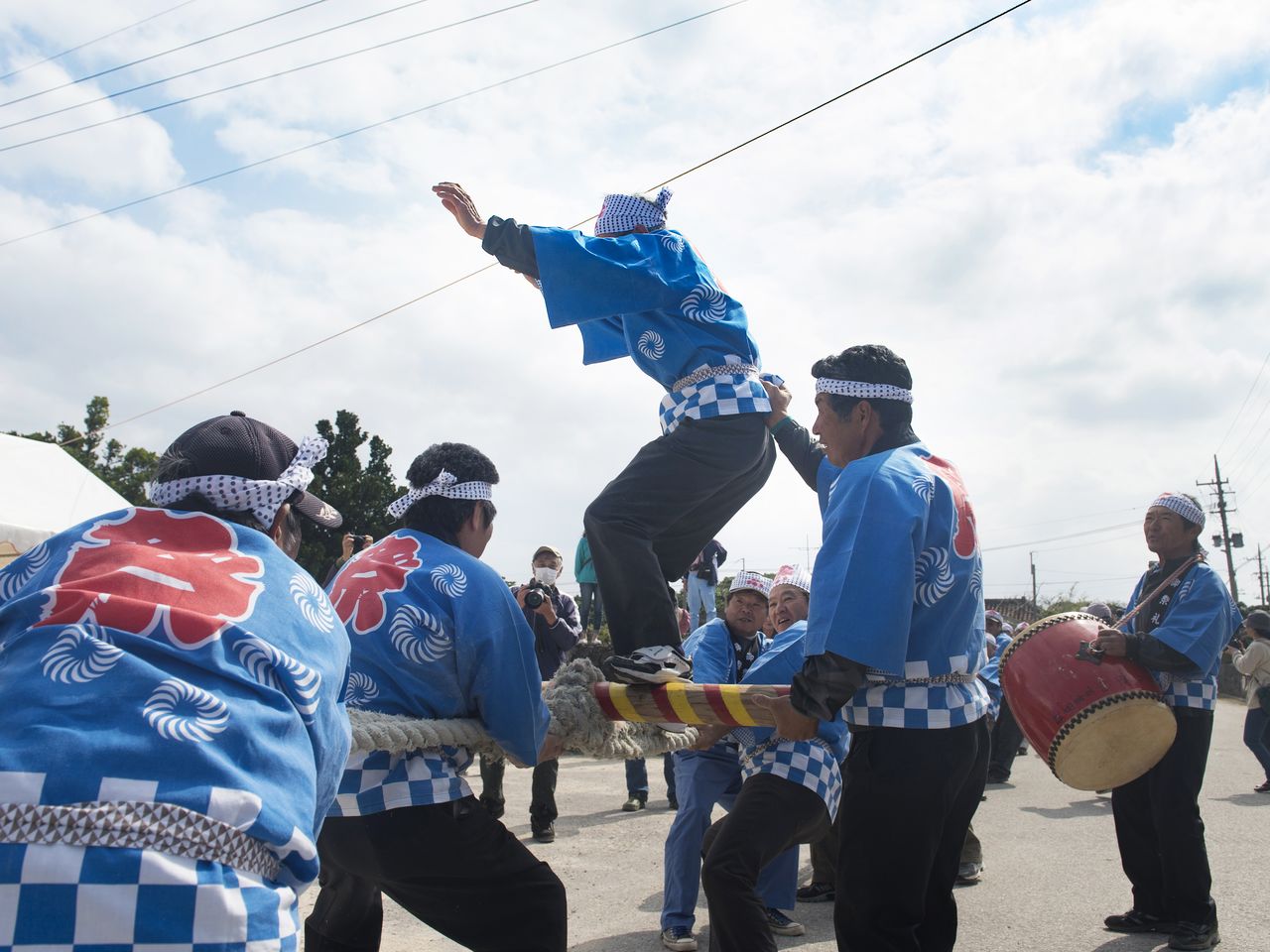 A participant leaps onto the central bar that determines the winner to energize the two sides. 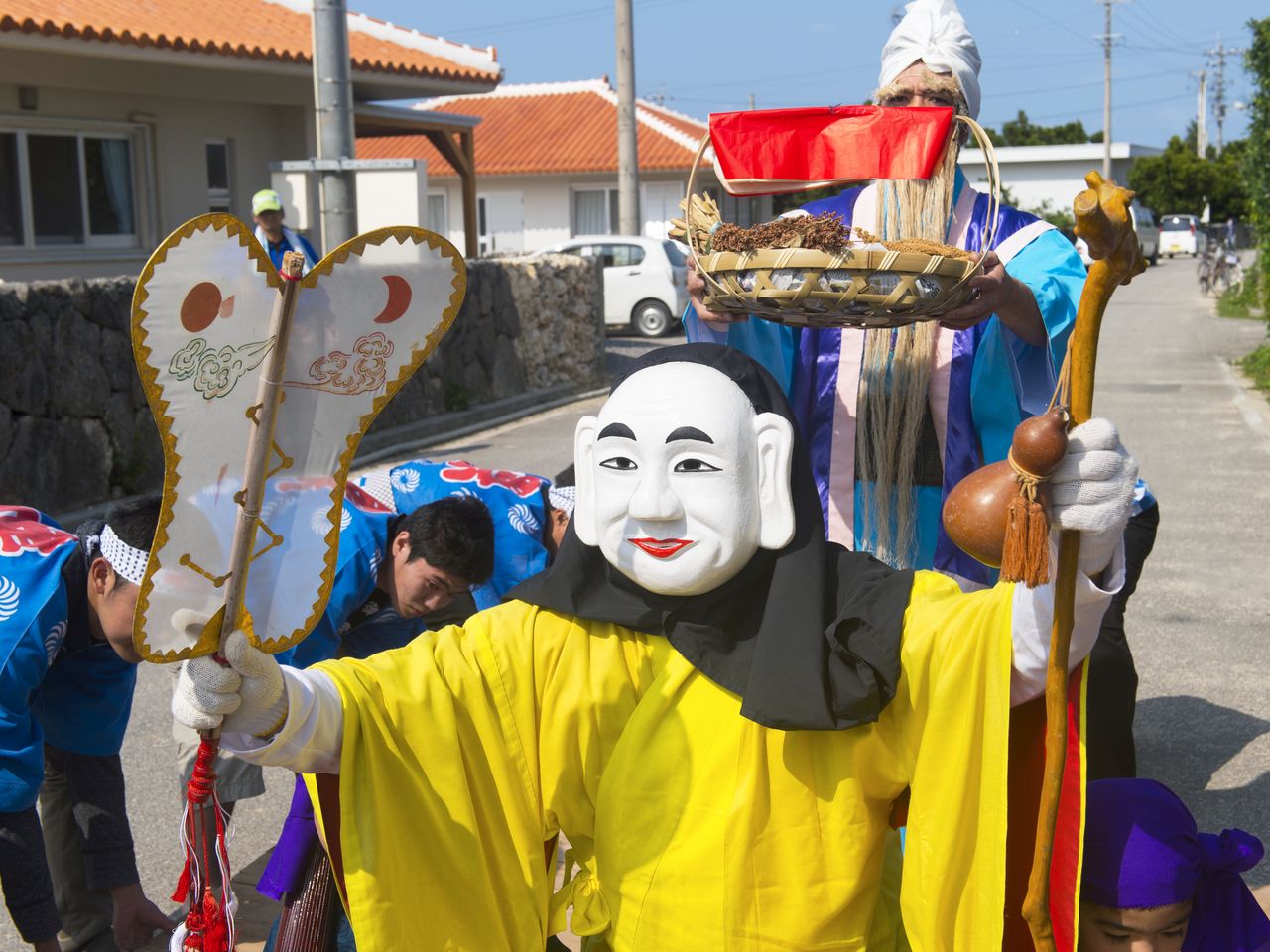 The Lunar New Year festivities on the three islands are all distinctive in their own way, but share a common thread—the joy of welcoming the new year, strong community bonds, and smiling faces everywhere.