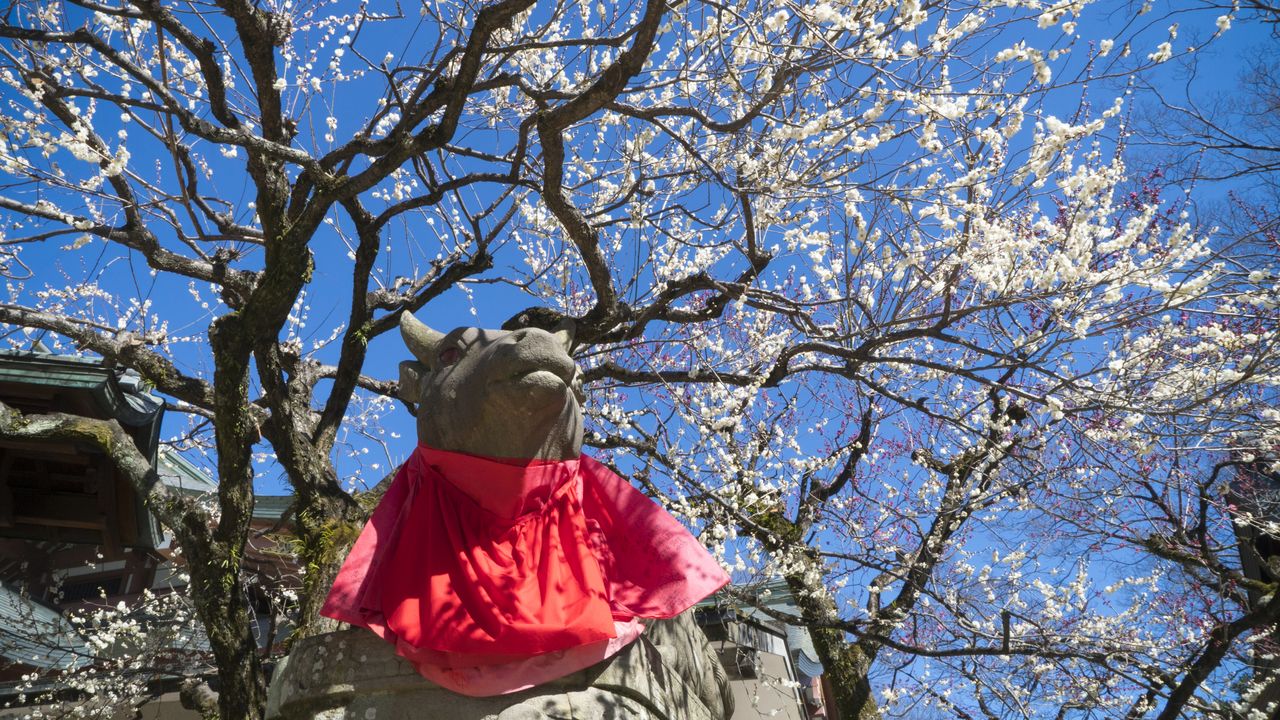 Travel Mar 6, 2019
Refined in appearance and exuding a sweet scent, ume, or plum blossom, as the flower of the Japanese apricot (Prunus mume) is known, is a harbinger of spring that flowers before the sakura cherry blossoms awaken. In modern times, hanami flower viewing is invariably associated with sakura, but up until the Heian period (794–1185) the favored flower was ume. Here we introduce some of the most popular spots in Kyoto for ume viewing: Kitano Tenmangū, Jōnangū, and Umenomiya Taisha.

Kitano Tenmangū, a Shintō shrine in Kamigyō-ku, honors Sugawara no Michizane (845–903), a court official and scholar who is revered as the god of learning. It is one of the most famous ume-viewing spots in Kyoto. Michizane loved the ume in his Kyoto garden, and when he was exiled to Dazaifu in Kyūshū, he bid farewell to his beloved ume with this poem.

If an east wind blows,
send me your fragrance by it,
blossoms of plum:
Do not forget the springtime
because your master is gone. 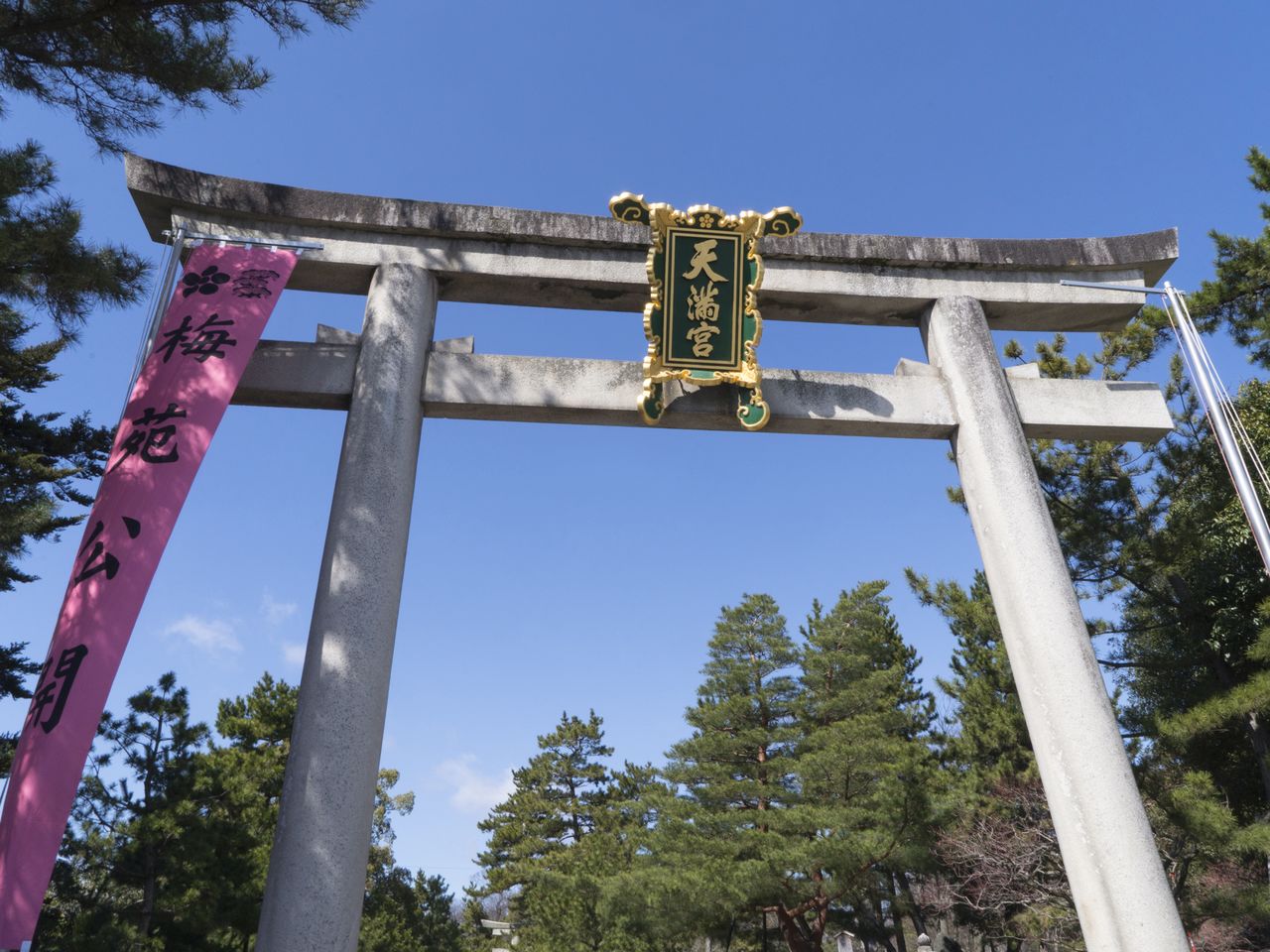 A banner hanging from the left of the torii announces that ume are in bloom at Kitano Tenmangū.

There are 1,500 trees belonging to 30 species in the ume grove at Kitano Tenmangū Shrine. The trees usually reach peak bloom from early February to late March, but some flower as early as January, just after New Year’s, so ume viewing can be enjoyed here for quite a long stretch. Admission is charged when the flowers are in bloom, and nighttime illumination began in 2018.

Ume can also be enjoyed outside the shrine’s grove. For example, red and white ume flower around the Treasure Hall to the right of the Rōmon. A large white ume tree grows directly behind a statue of an ox, said to be the messenger of Tenmangū Shrine, giving the illusion that the ox is looking up at and enjoying the flowers. 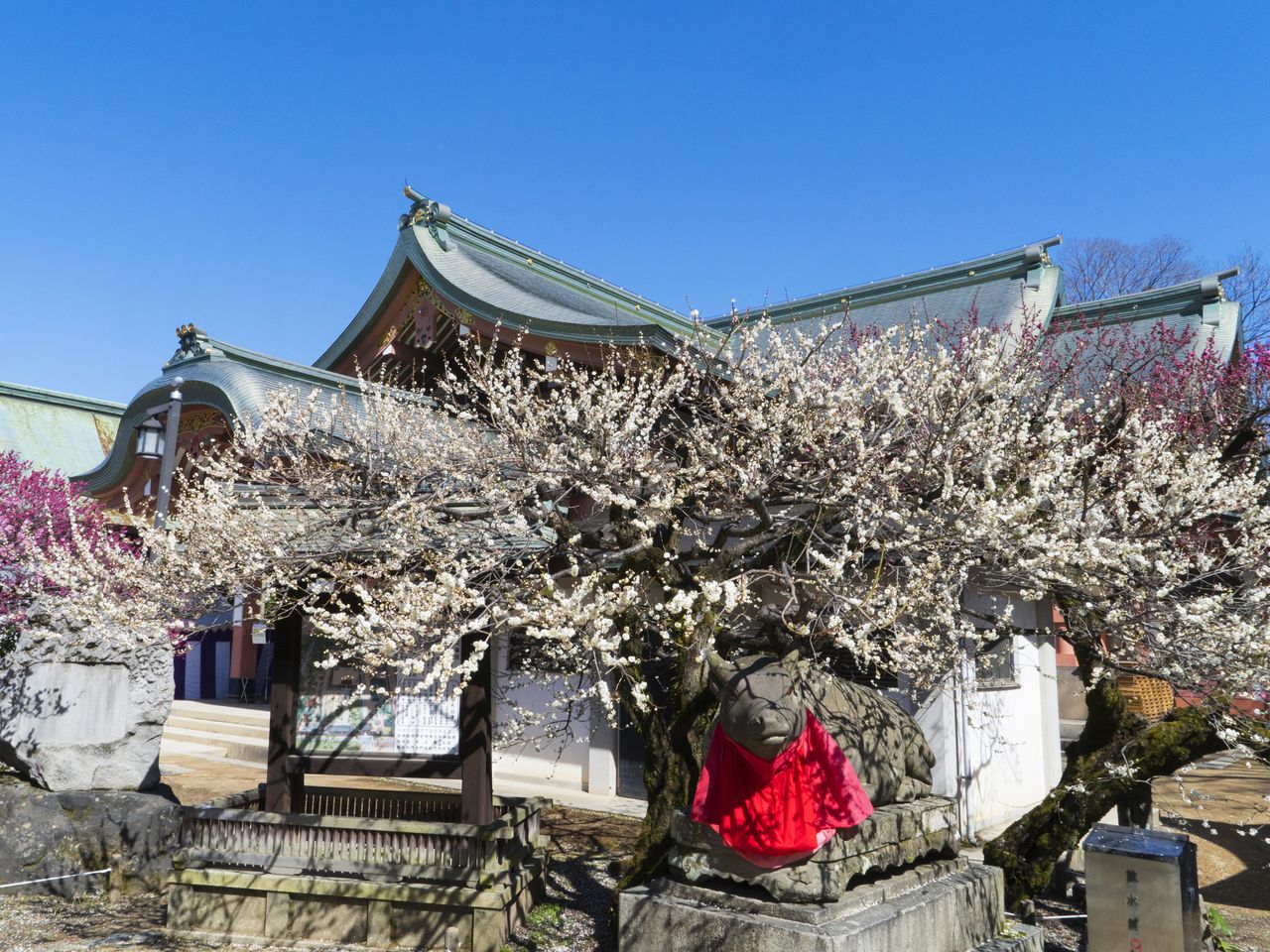 A flowering ume spreads its blooms over a stone statue of a reclining ox, near the shrine’s Treasure House. 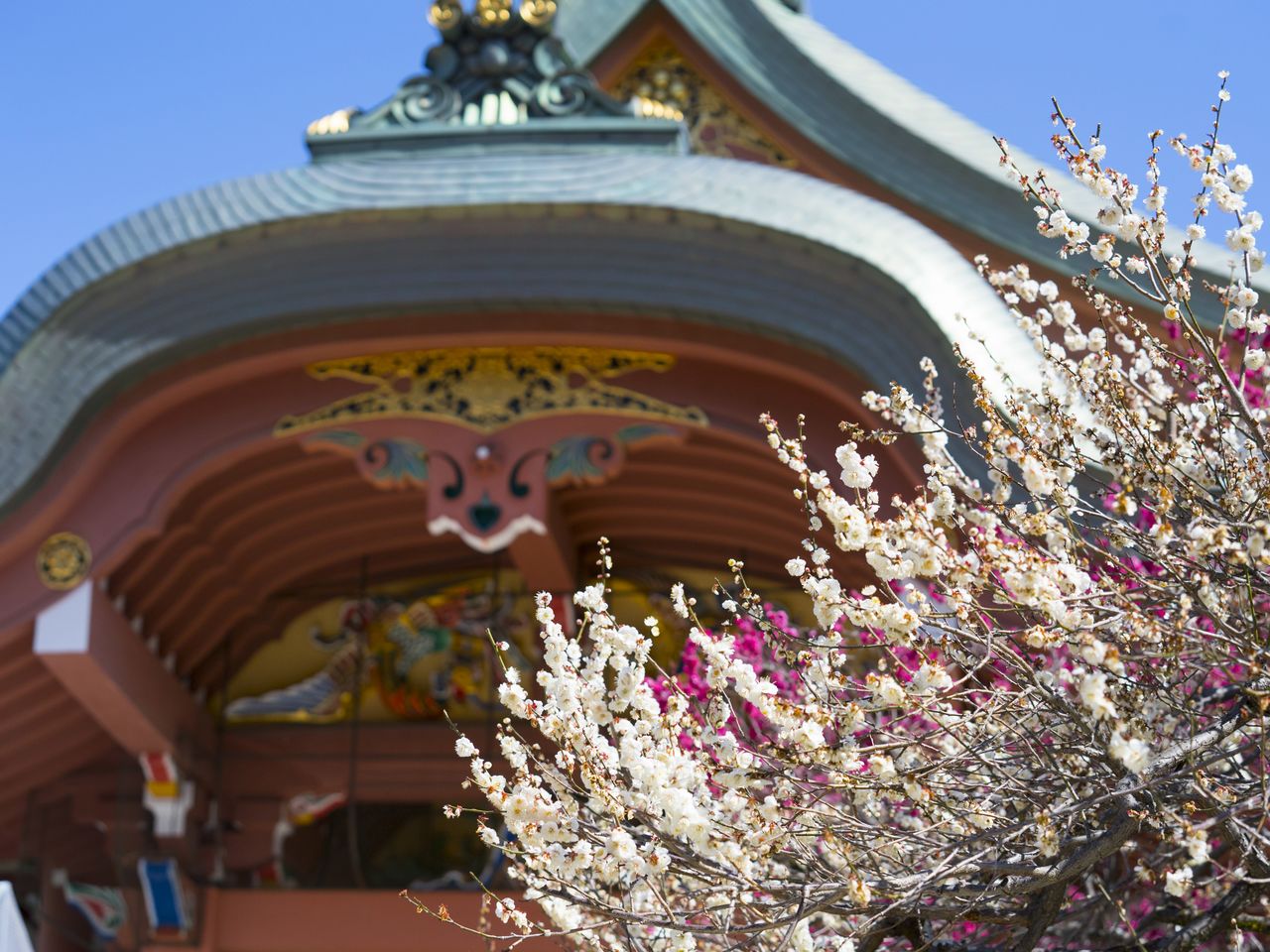 Ume make a beautiful contrast against the Treasure House.

White ume also bloom in front of the shrine’s Sankōmon, a structure designated an Important Cultural Property. Moving along to the Main Hall, a National Treasure, visitors can see an ume tree on the left paired with a pine tree on the right. This ume is called beniwakonbai and belongs to the same species as that in the “flying pine” legend. According to this story, Michizane’s beloved ume, pining for its master, “flew” all the way from Kyoto to Dazaifu overnight. The association of Tenmangū’s spectacular ume prompts visitors to imagine life in Kyoto in centuries past. 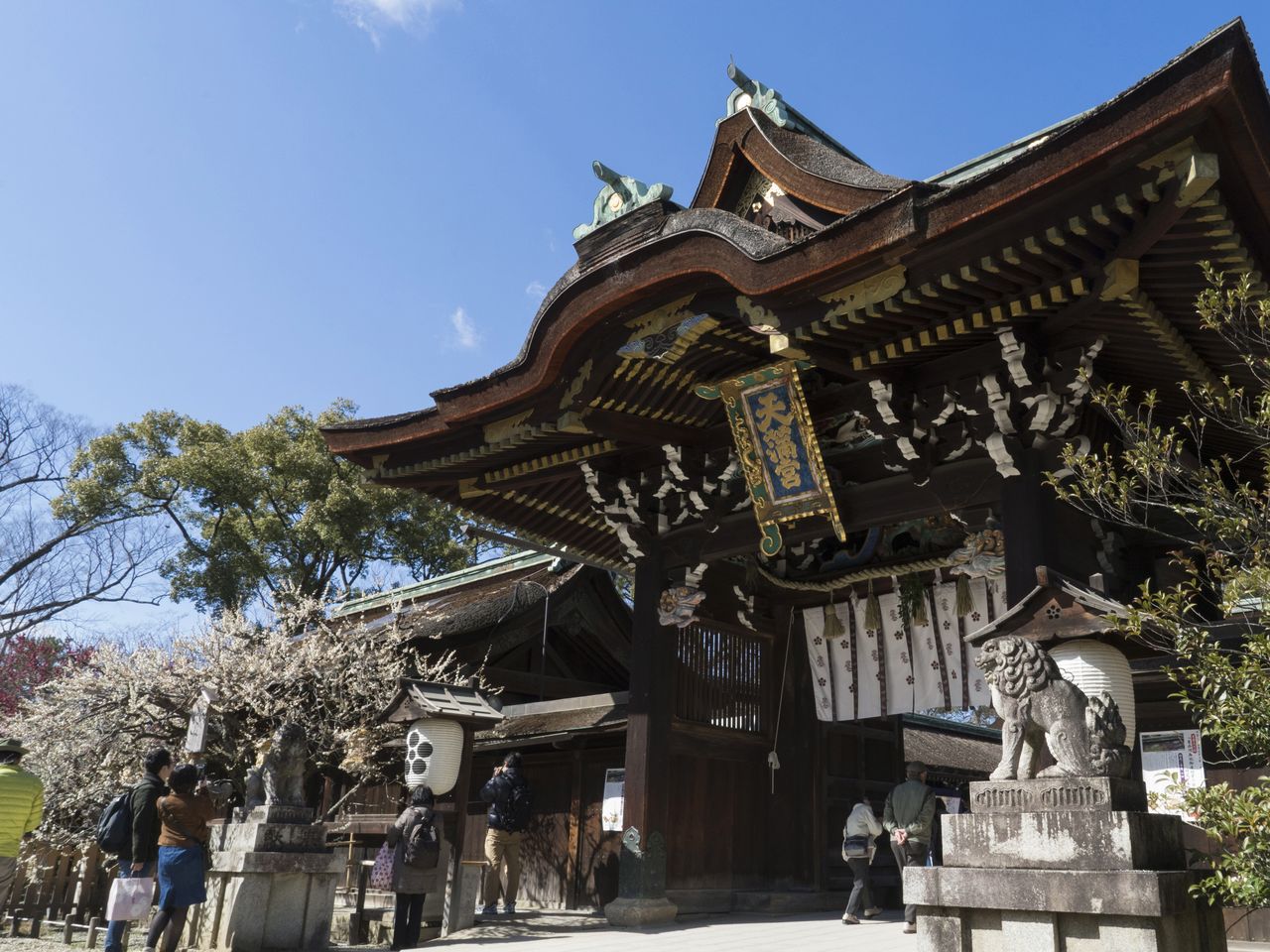 White umeu bloom in front of the Sankōmon, an Important Cultural Property. 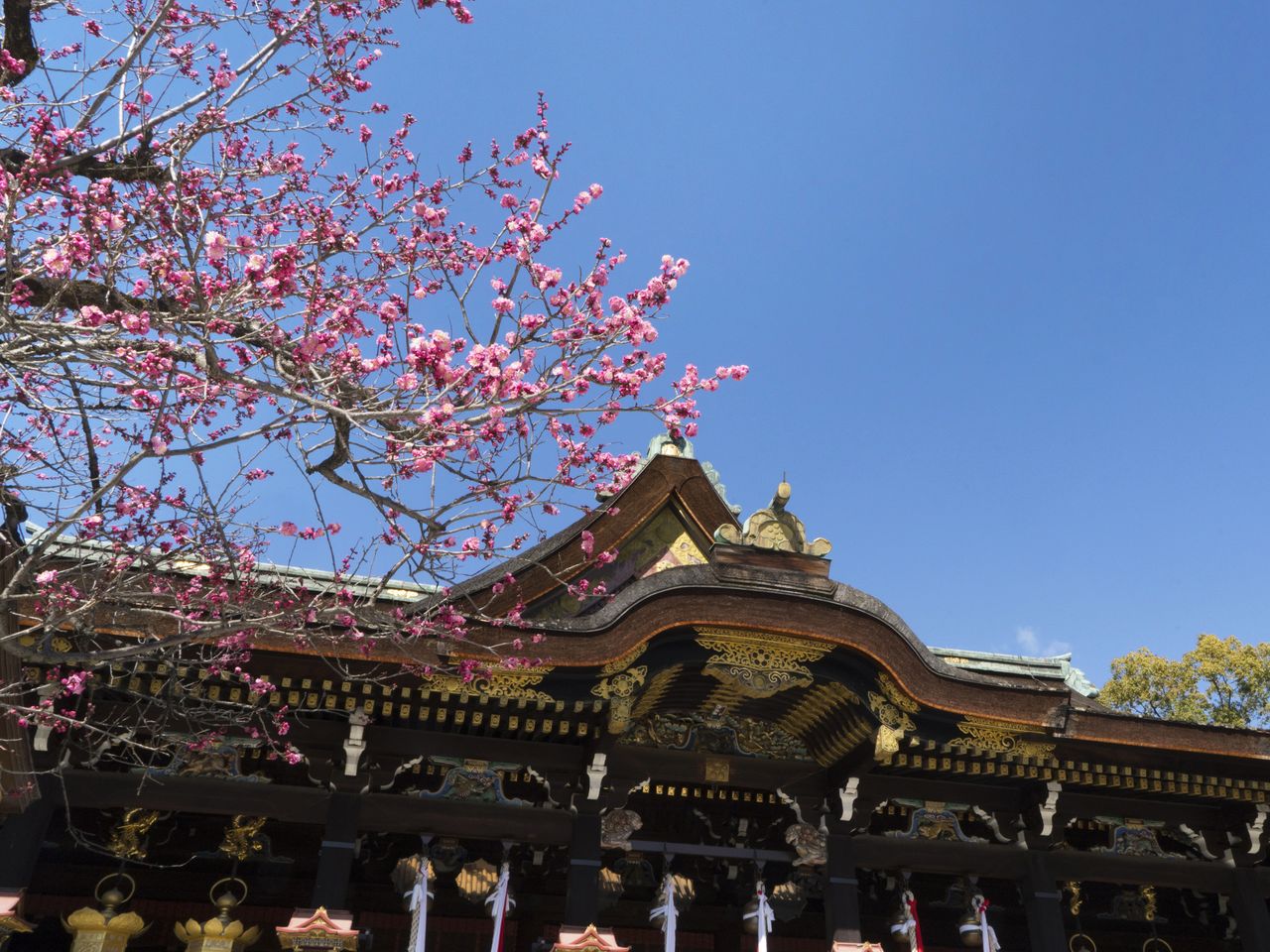 The beniwakonbai in bloom in front of the Main Hall, a building designated a National Treasure. 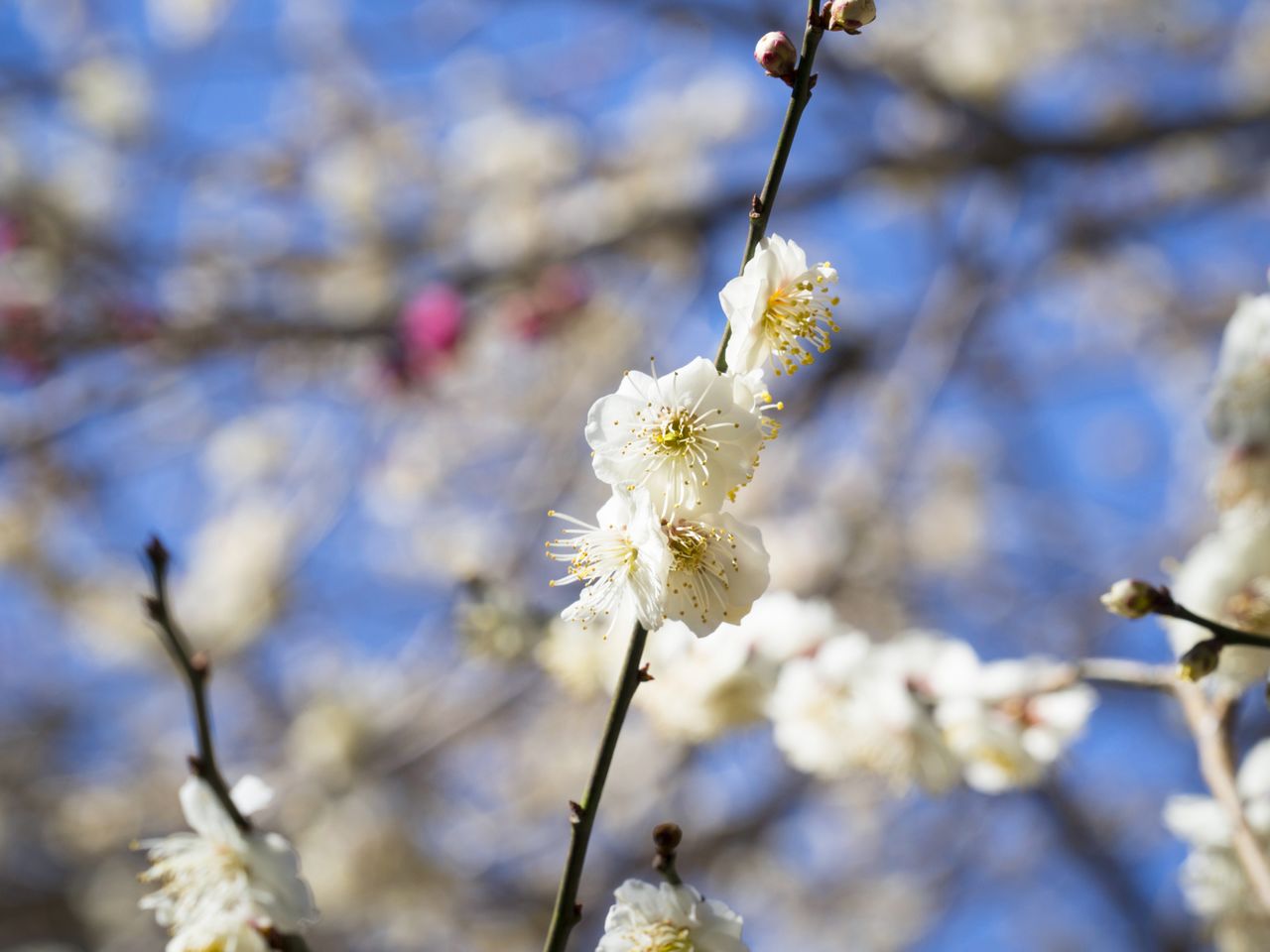 The sweet scent of ume means that spring is near.

Jōnangū was erected when the imperial capital was moved to present-day Kyoto in 794 to protect the city’s southern approaches. Its gardens were designed by Nakane Kinsaku (1917–95), noted for creating the gardens at the Adachi Museum of Art in Yasugi, Shimane Prefecture, and the Tenshin-en garden at the Boston Museum of Fine Arts. Nakane has been dubbed a modern-day Kobori Enshū, after the celebrated seventeenth-century garden designer and tea ceremony instructor. The gardens at Jōnangū have five distinct themes and are designed so that flowers and greenery can be enjoyed throughout the year. The Haru no Yama (spring mountain) garden is especially notable for its 150 weeping ume trees. 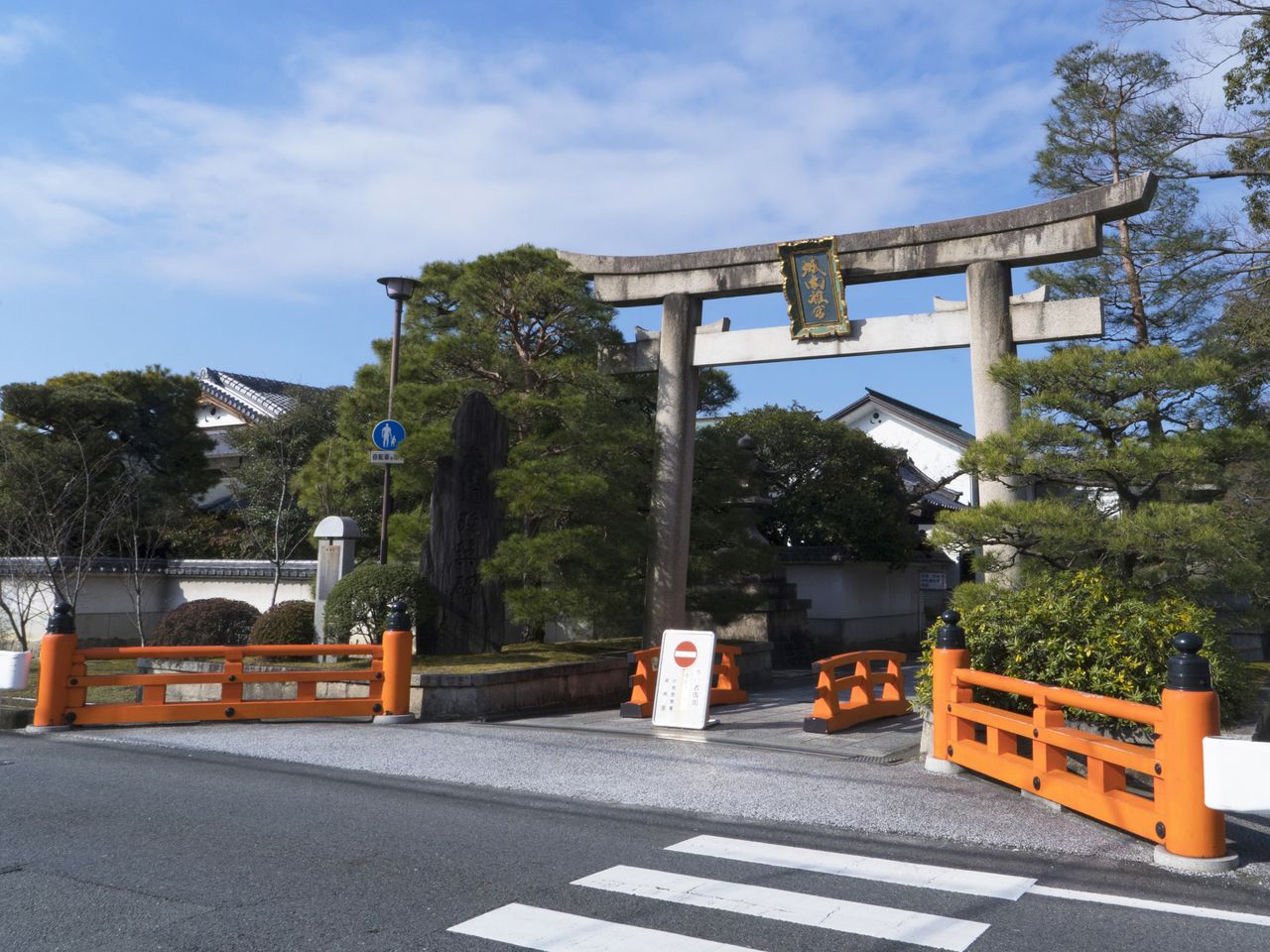 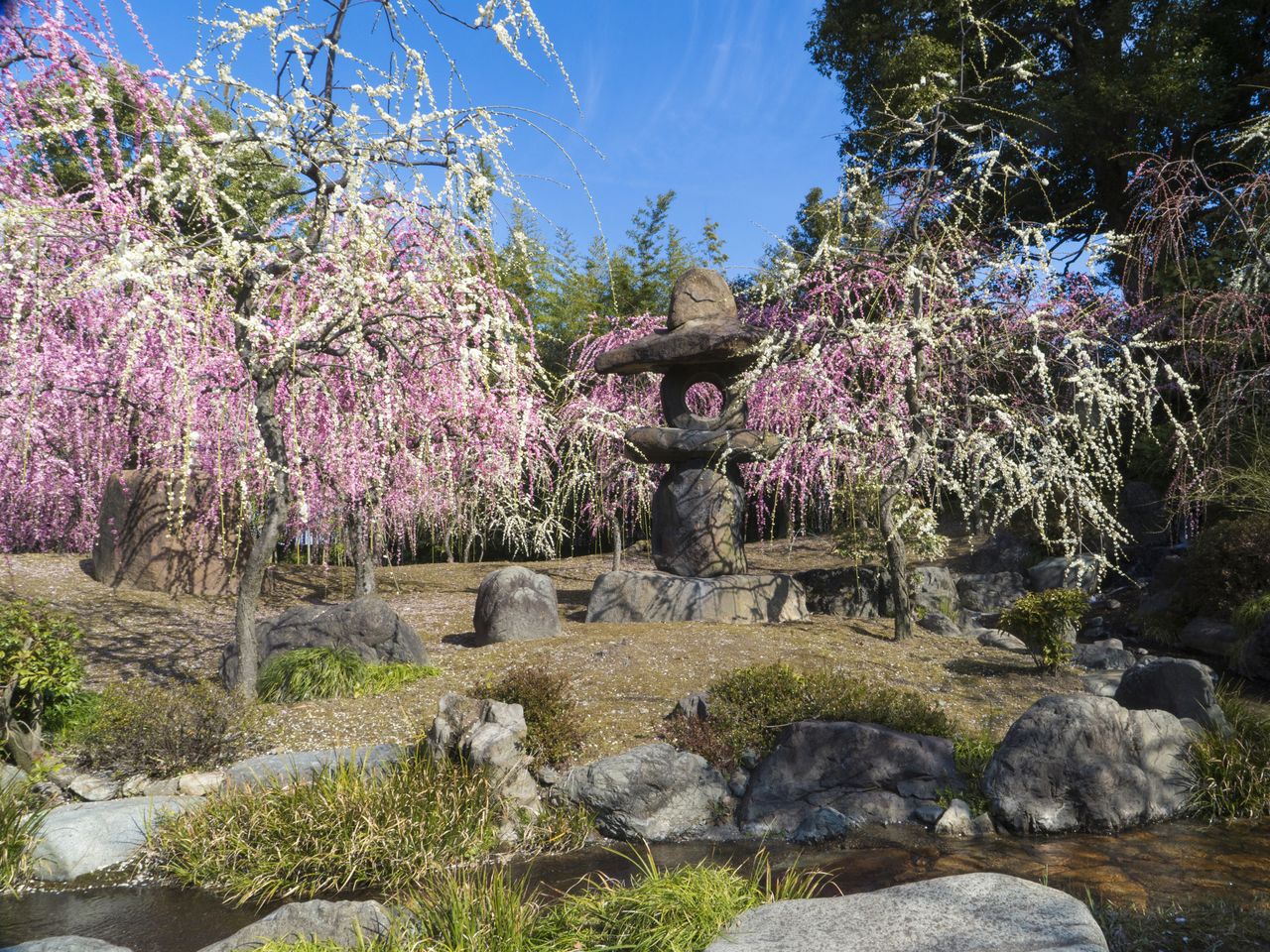 The artistically laid-out Haru no Yama garden, with a stream, garden stones, and weeping trees in bloom.

Visitors to Haru no Yama can enjoy the sight of flowering trees to the sound of a babbling brook flowing through the garden. A view of the garden from the west reveals a tapestry-like effect in different shades of pink created by the overlapping branches of the trees in full bloom. And when the long branches sway in the breeze, the ever-changing panorama of the light and dark pink of the flowers put on an elegant show. The northeastern corner features camellias, another spring flower. Here the contrast between the green moss, bright red camellias, and pink ume is a captivating sight. 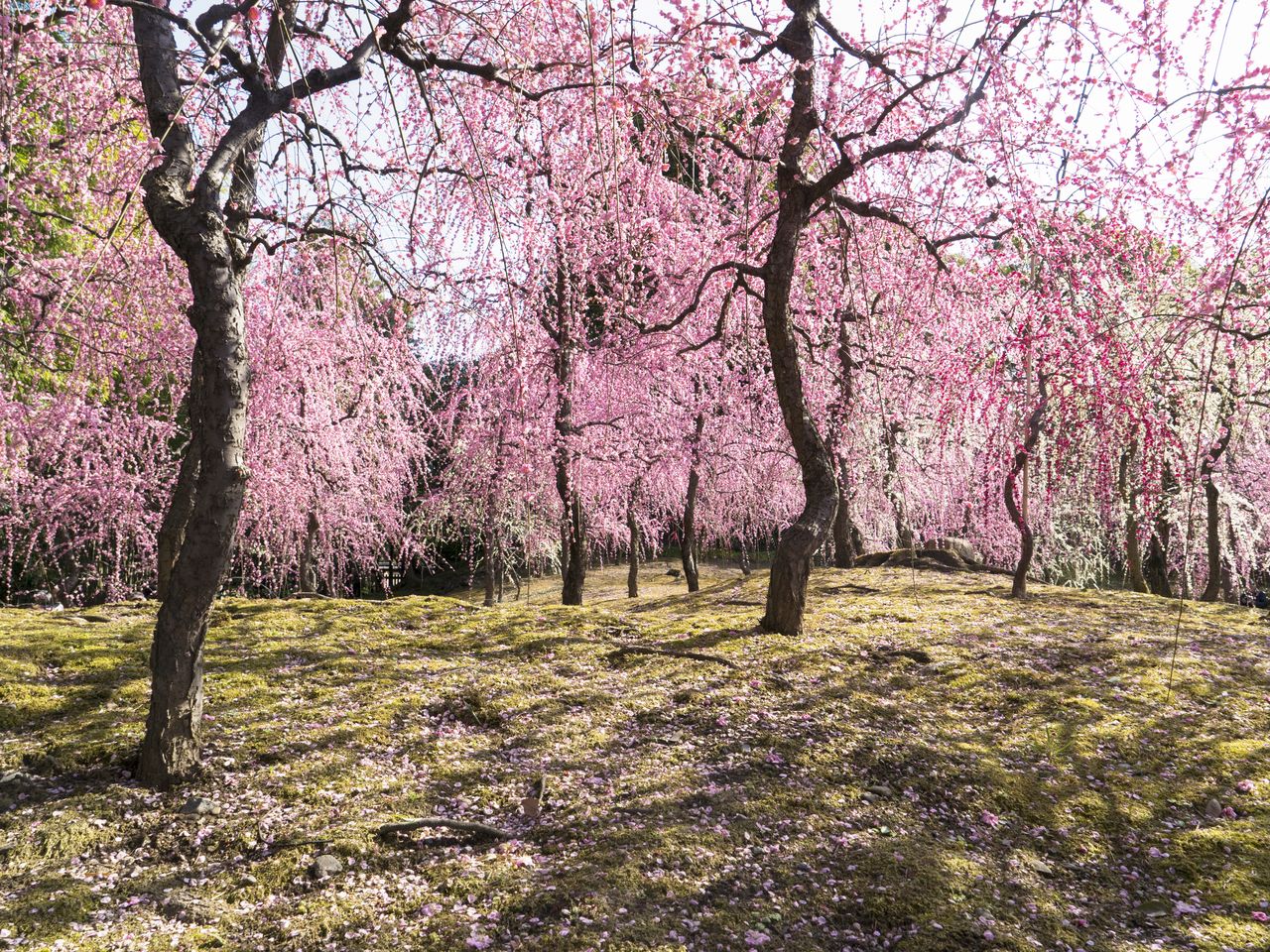 The overlapping branches of weeping ume create a curtain of different shades of pink. 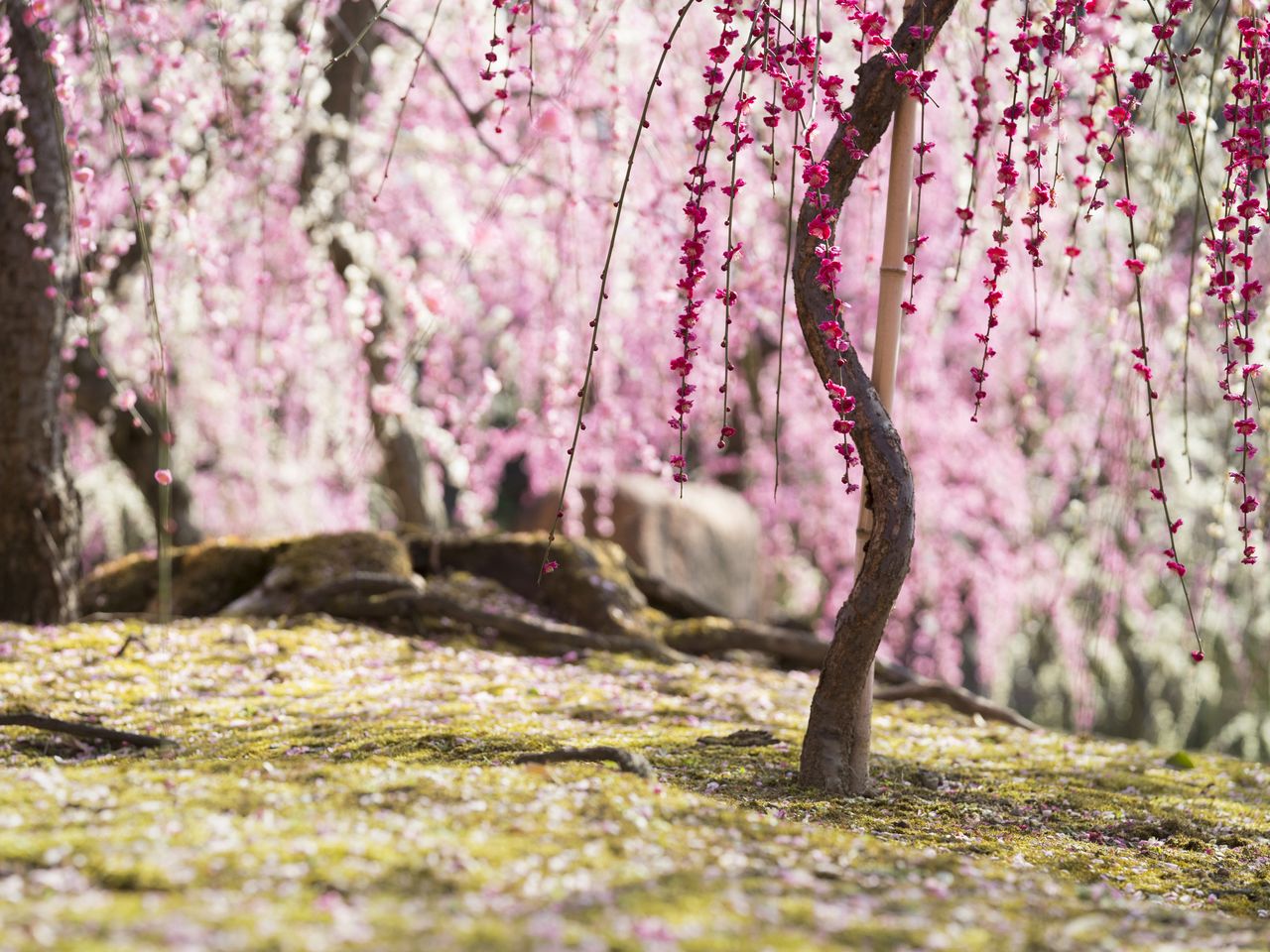 Moss carpeted with fallen ume petals attracts many who come especially for this sight when the flowers are past their peak. 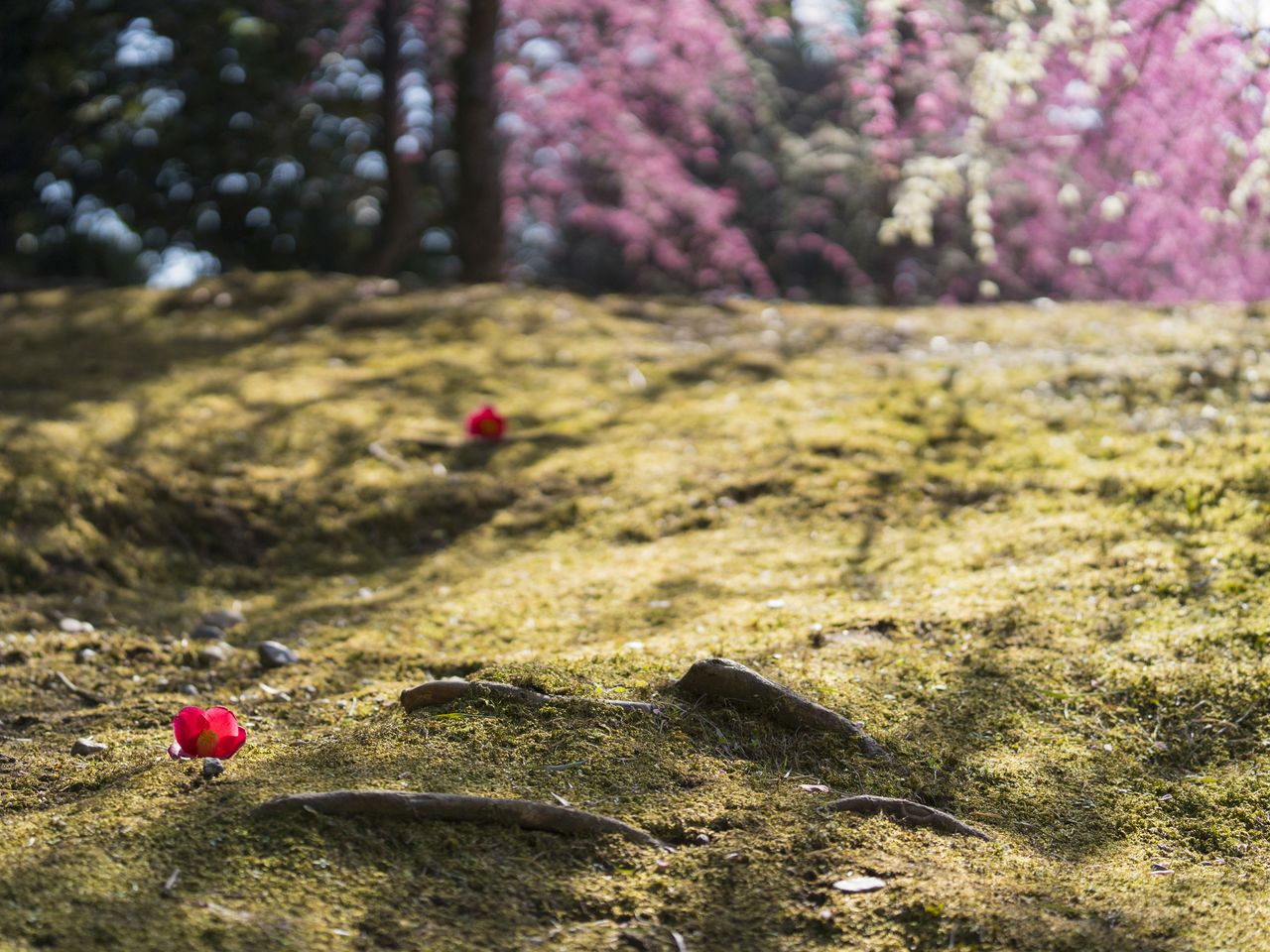 A mossy carpet, with camellias and ume adding color.

In addition to the gardens at Jōnangū, ume also bloom at Serikawa Tenmangū, also known as Karawatari Tenmangū, an auxiliary shrine within the precincts of Jōnangū. The best time of year for ume viewing here is usually late February to mid-March. 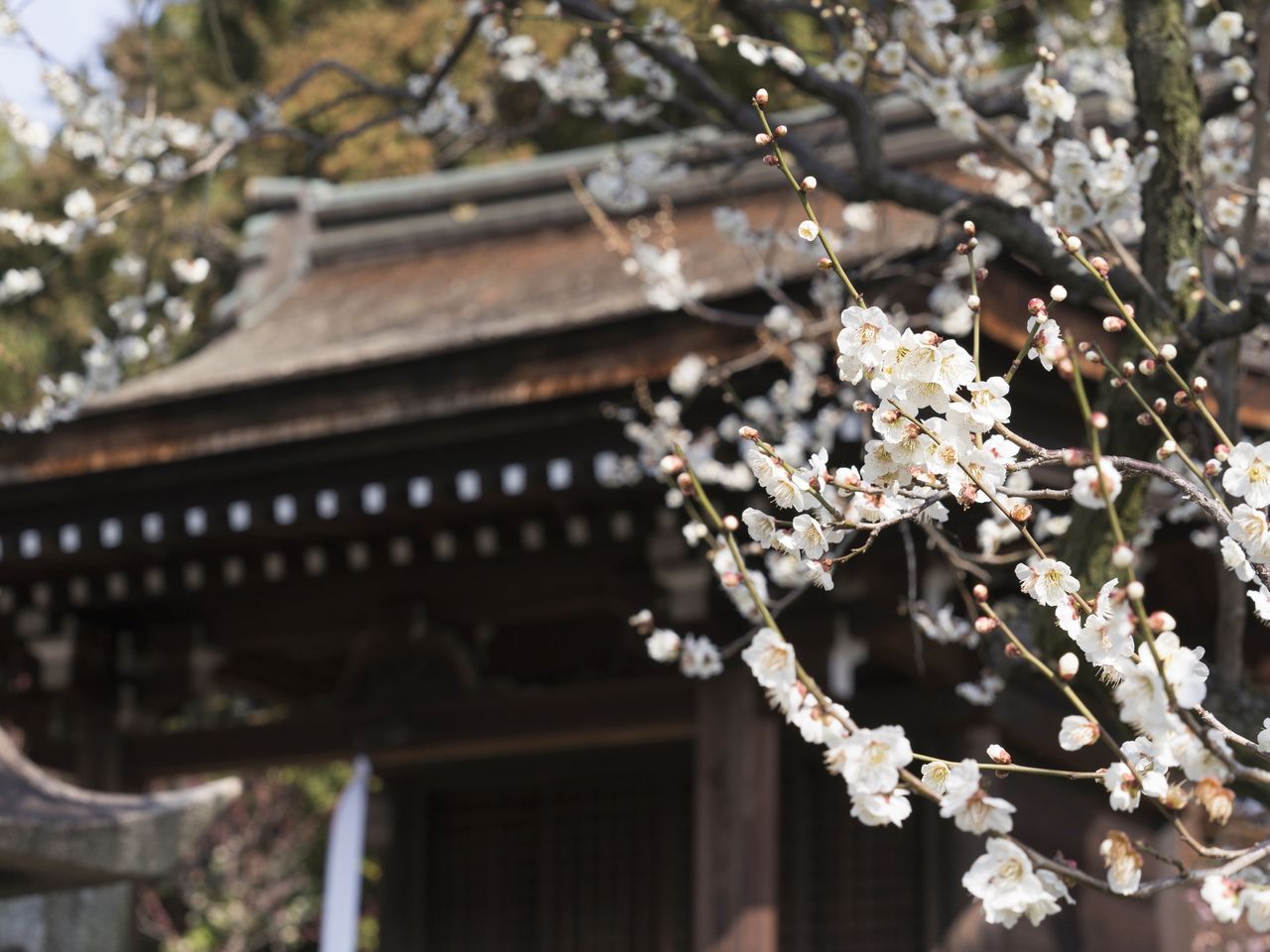 Umenomiya Taisha: The Shrine of Ume and Childbirth

With ume in its name, Umenomiya Taisha in the western part of Kyoto is a justifiably popular spot for ume viewing. This shrine venerates the Tachibana, one of the four politically powerful clans before and during the Heian period.

Although the exact date of Umenomiya Taisha’s founding is not clear, it was supposedly relocated to its present site by Empress Danrin, consort of Emperor Saga (r. 809–823). Praying for a child at the shrine, the empress promptly conceived a son who would later become Emperor Ninmyō, and ever since then women have prayed here for children and for safe childbirth. The shrine is known for its votive tablets illustrated with ume flowers and the homophonic characters 梅 and 産め, both read ume and meaning “plums” and “giving birth,” respectively. 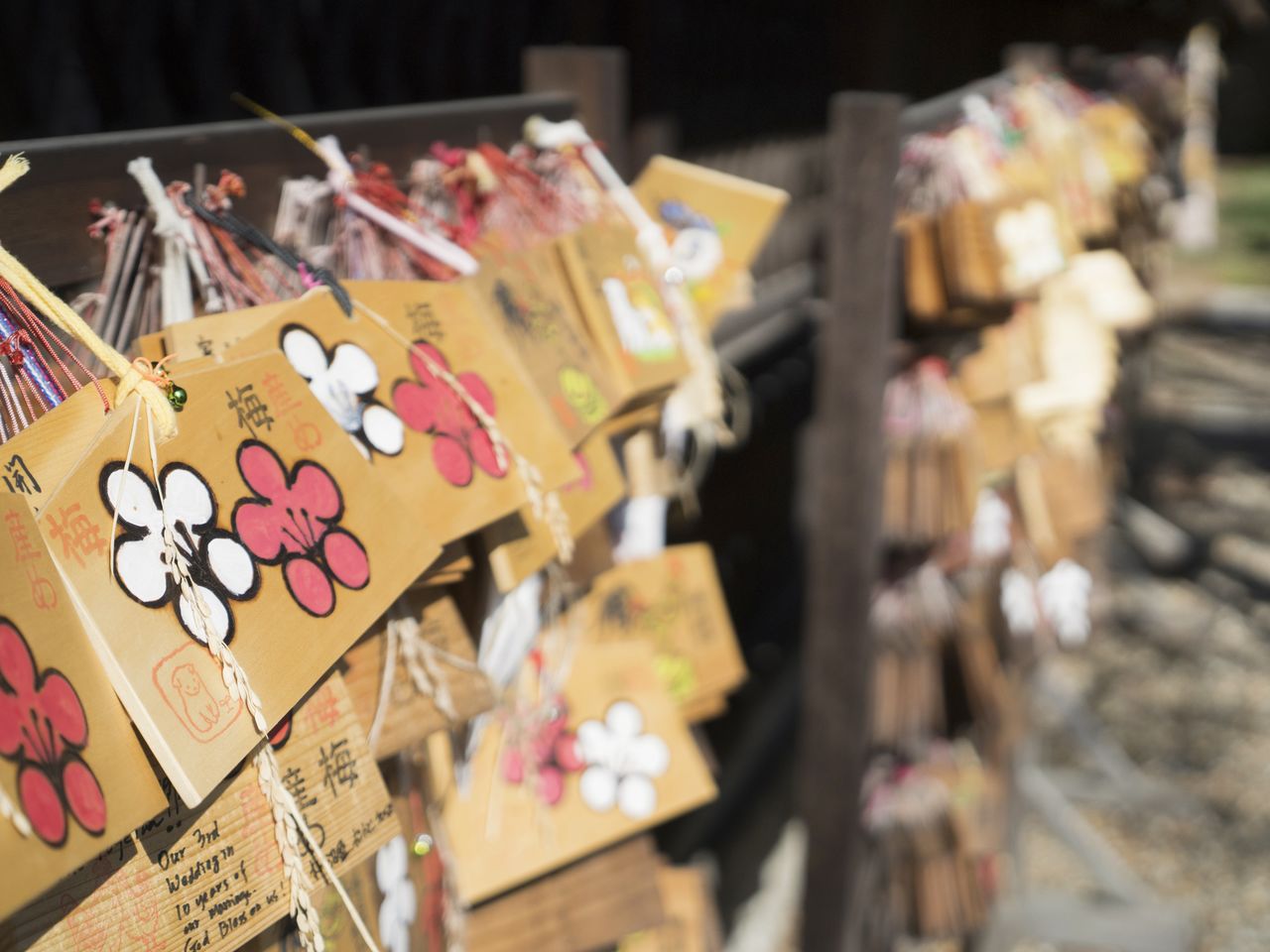 Votive tablets with a play on the word ume to pray for children and safe childbirth.

Once past the red torii gate, visitors can admire a row of trees with red and white ume in front of the imposing Rōmon. Note the sake barrels lined up on the upper story of the Rōmon, for Umenomiya Taisha is also home to the guardian deity of sake brewers.

Flowering ume trees are also planted on the eastern side of the Worship Hall, where there are benches for visitors to sit and admire the scene. A stone pillar called the hyakudo ishi (“hundred times” stone) stands in front of the trees. It’s said that walking back and forth along the stone path leading to another stone set in the ground while intoning one’s wish one hundred times will make that wish come true. In spring, visitors can do this while admiring the natural beauty of the flowering trees. 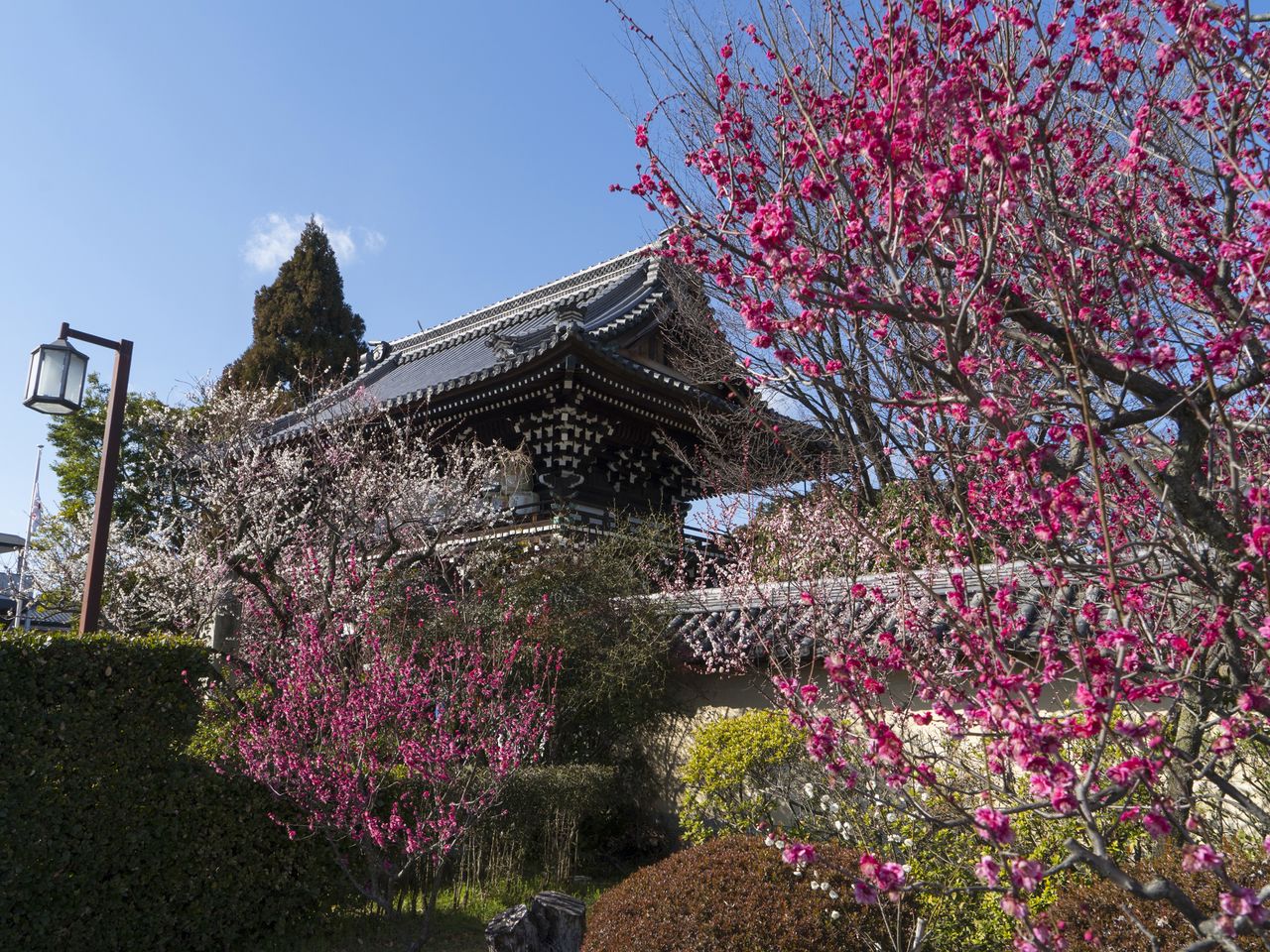 Red and white plum blossoms in front of the Rōmon. 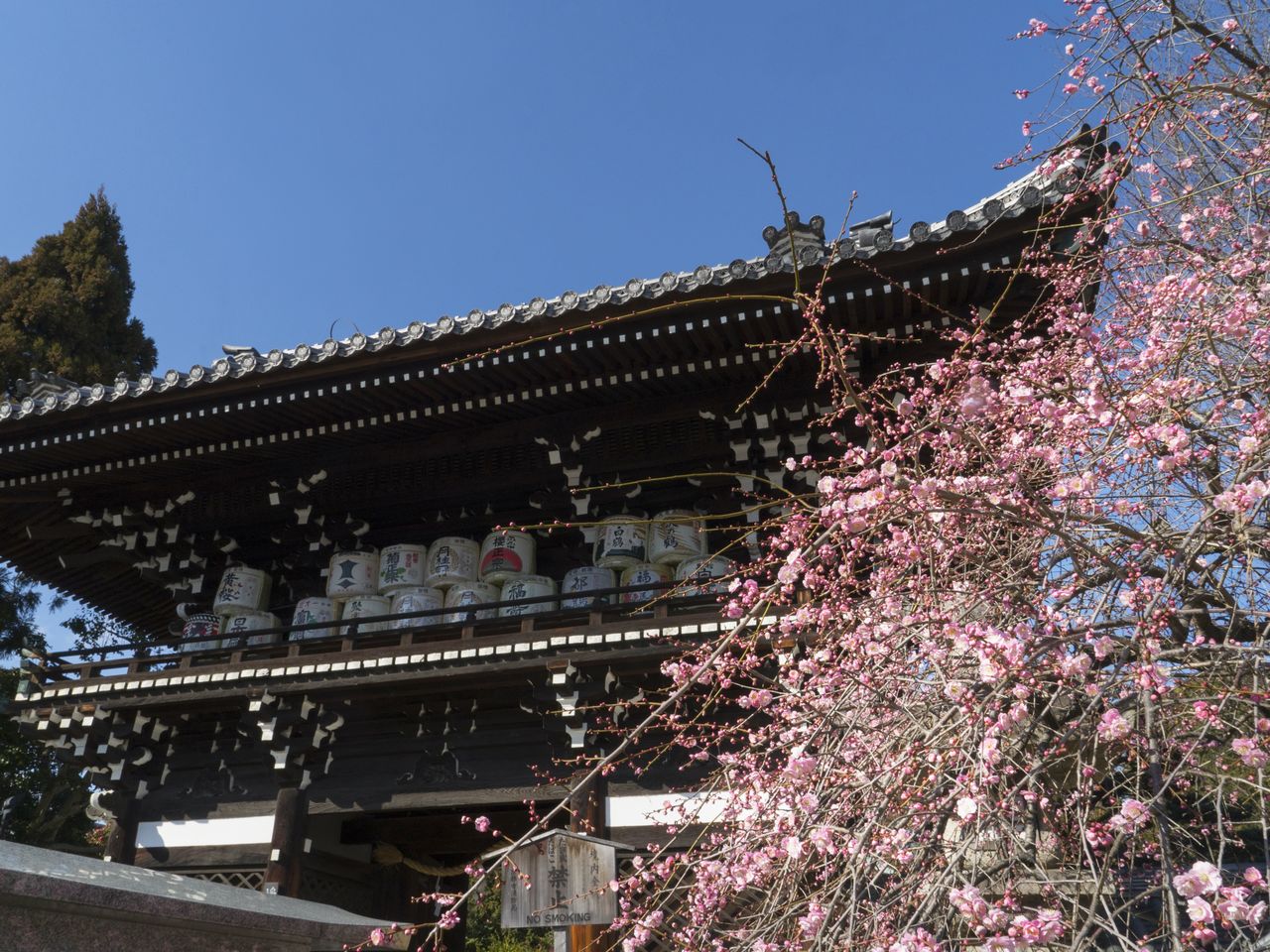 Umenomiya Taisha is the protector of sake brewers; large sake barrels are visible atop the Rōmon. 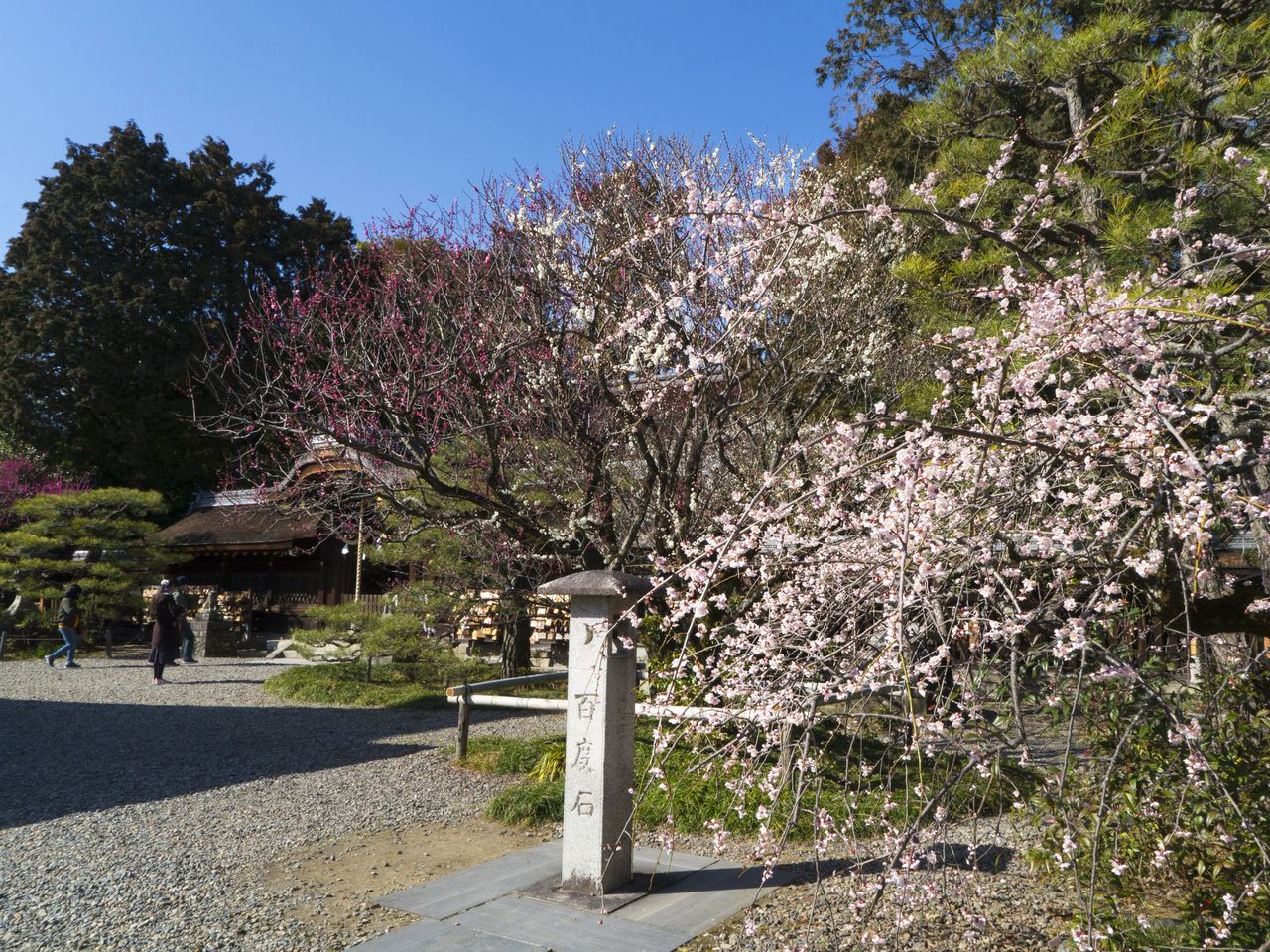 Ume in full bloom next to the shrine’s Worship Hall. 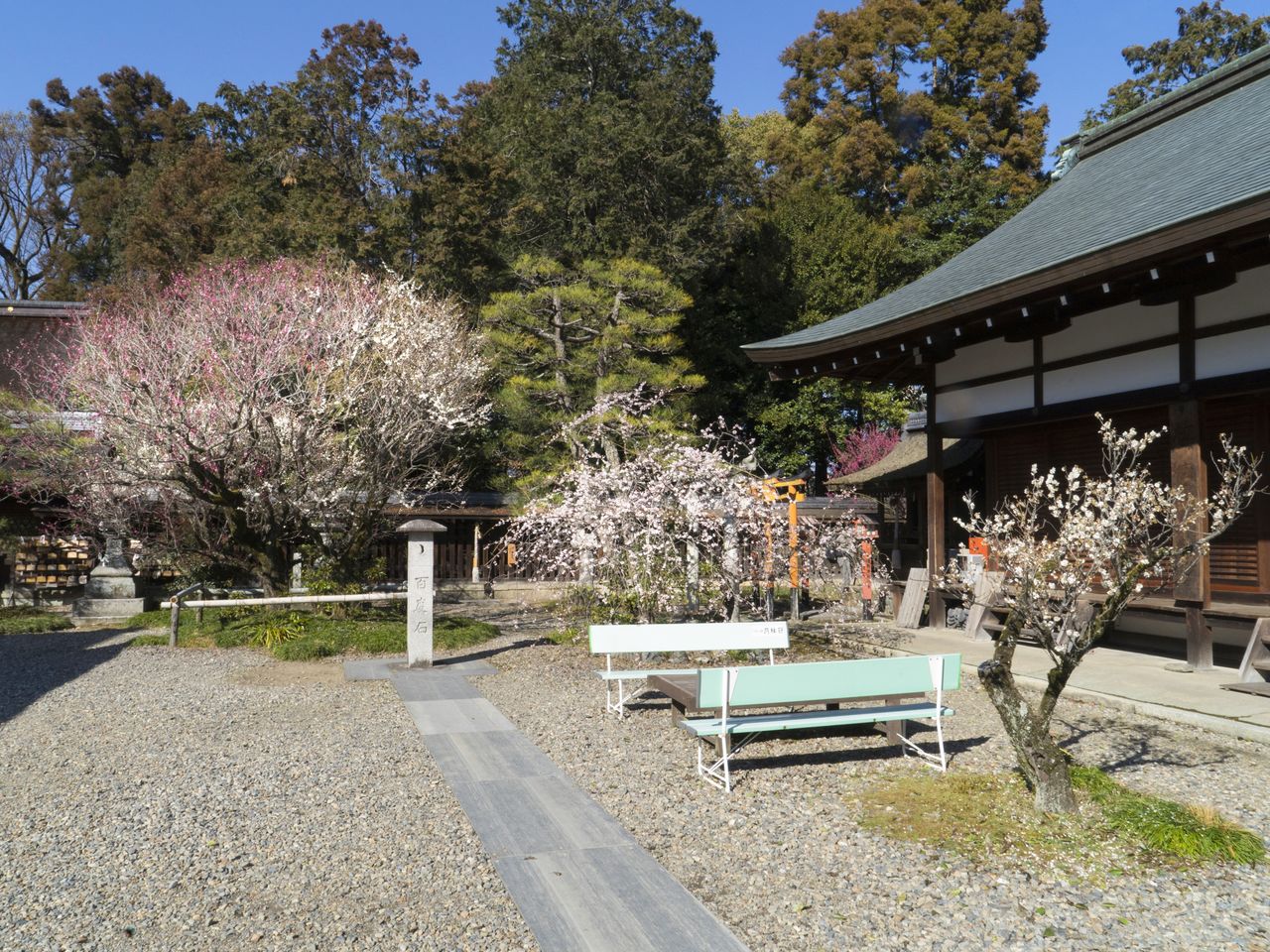 Together, the shrine’s north and west gardens are planted with 450 Japanese apricot trees belonging to 35 different species. The best time for viewing ume here is from mid-February to mid-March, but some species are late-blooming and can be enjoyed together with yamazakura cherry blossoms in late March. 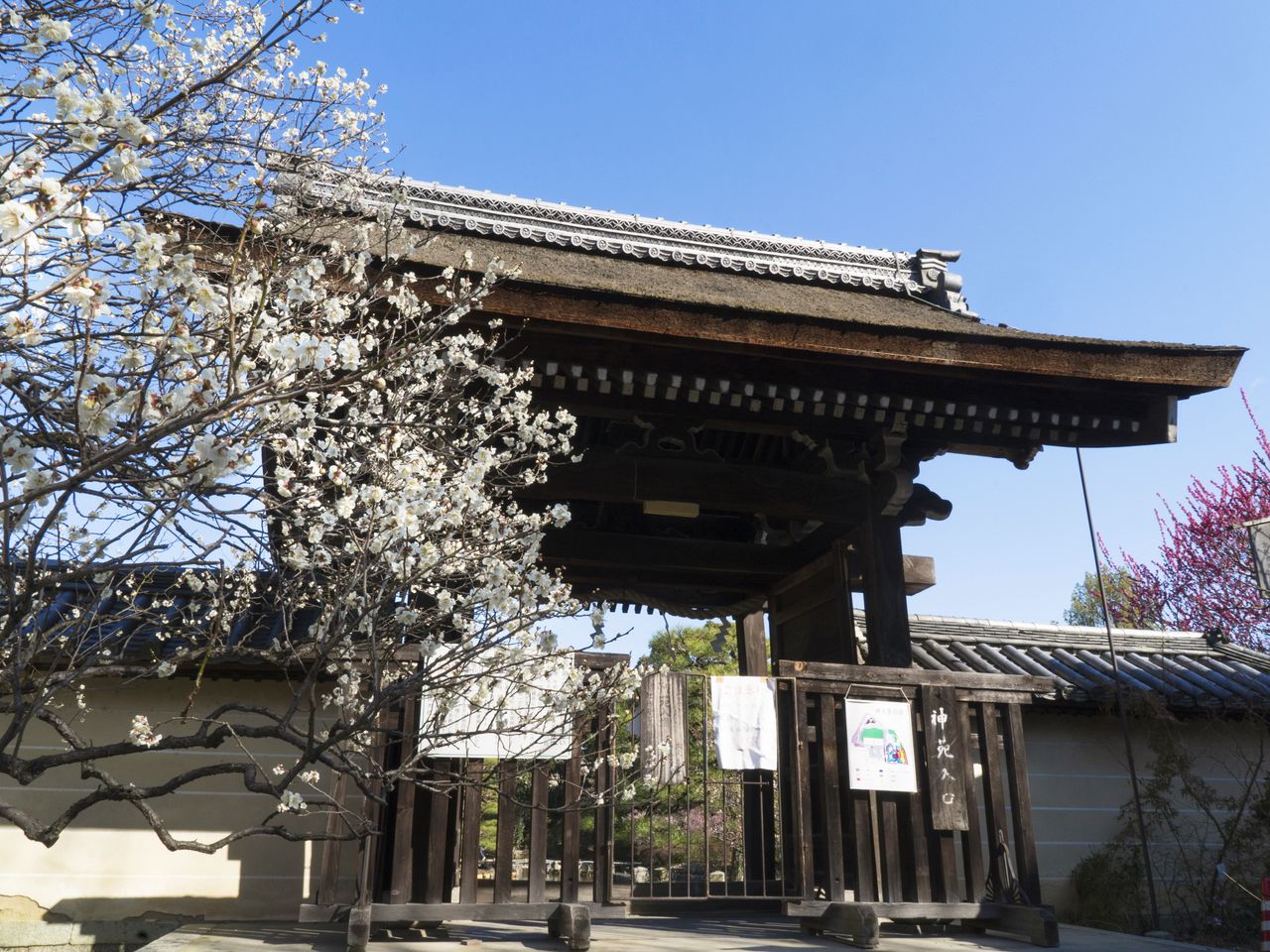 The entrance to the shrine gardens. Admission is ¥550 for adults and ¥350 for children. 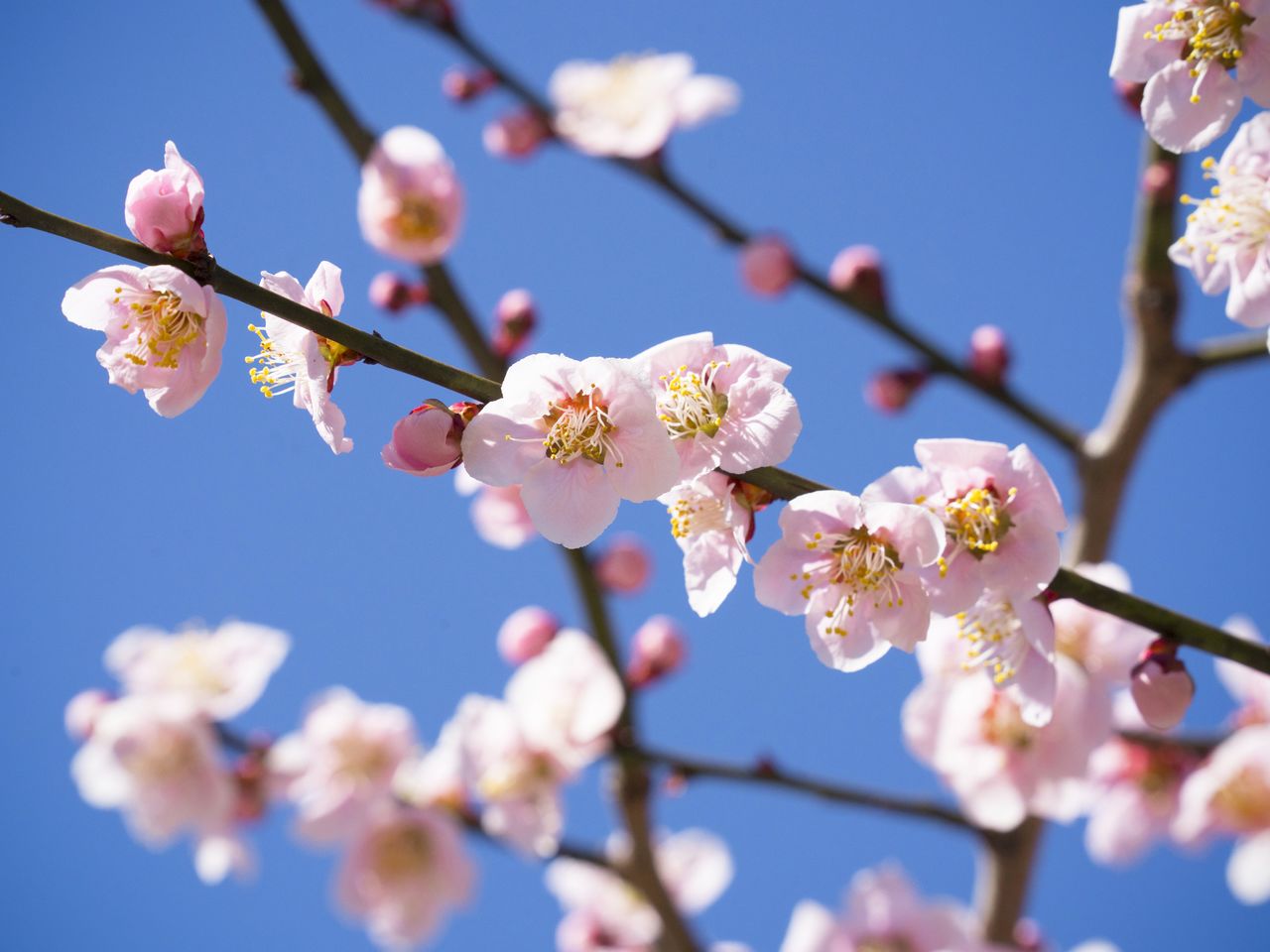 There are 450 Japanese apricot trees belonging to 35 species in the shrine precincts, including in the gardens.