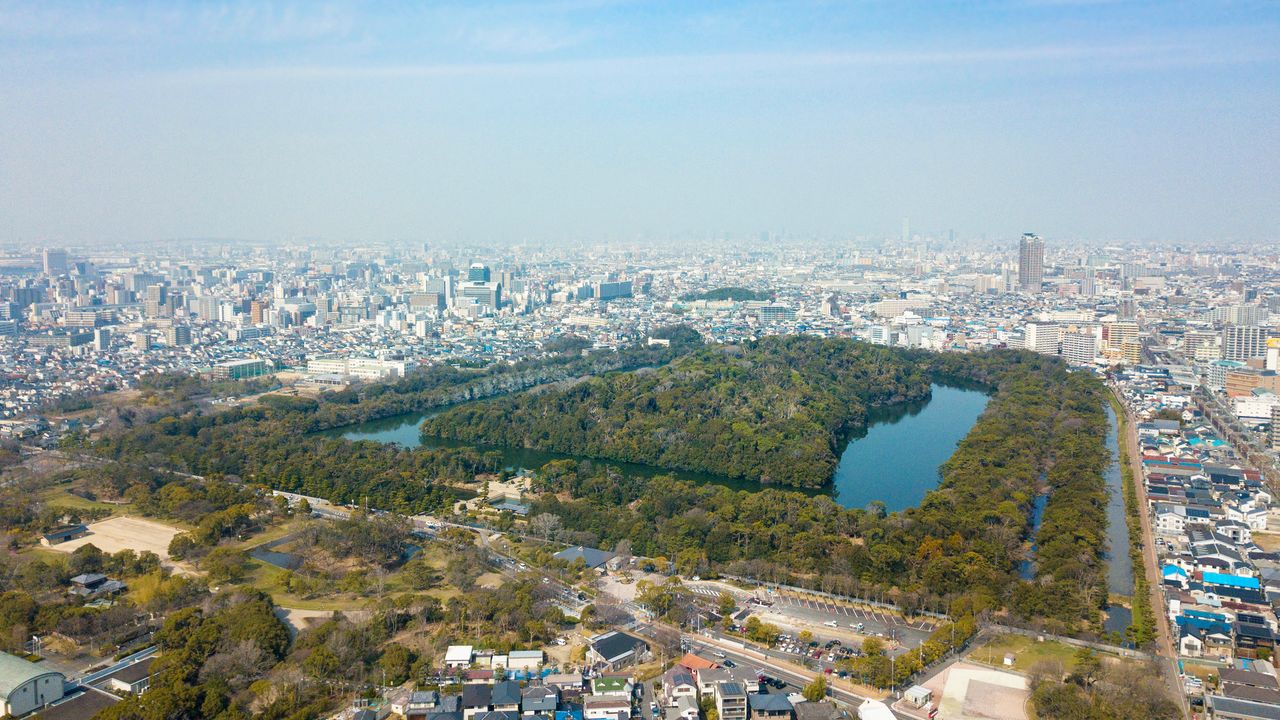 Graves from Japanese History: Things to See and Do in Sakai

Tombs in the Middle of Town

Sakai has a population in excess of 800,000, making it the second largest city in Osaka prefecture, after the city of Osaka itself. Its municipal administration has accordingly been granted a political status effectively equivalent to that of a prefectural government. And in the heart of the city’s urban center, where buildings and houses are crowded close together, stands the Daisen Kofun, the burial mound of Emperor Nintoku, reputed to have ruled Japan in the fourth century. A gigantic tumulus, the tomb resembles a keyhole when seen from above, with a tapered quadrilateral shape abutting a circular mound. Spanning a total length of 486 meters, the site is the largest among the approximately 160,000 burial mounds in all of Japan. The site also compares favorably with other great tombs elsewhere in the world: for example, the Mausoleum of the First Qin Emperor in China features a burial mound some 350 meters across, and the Egyptian Great Pyramid of the Pharaoh Khufu in Giza measures 230 meters on a side. 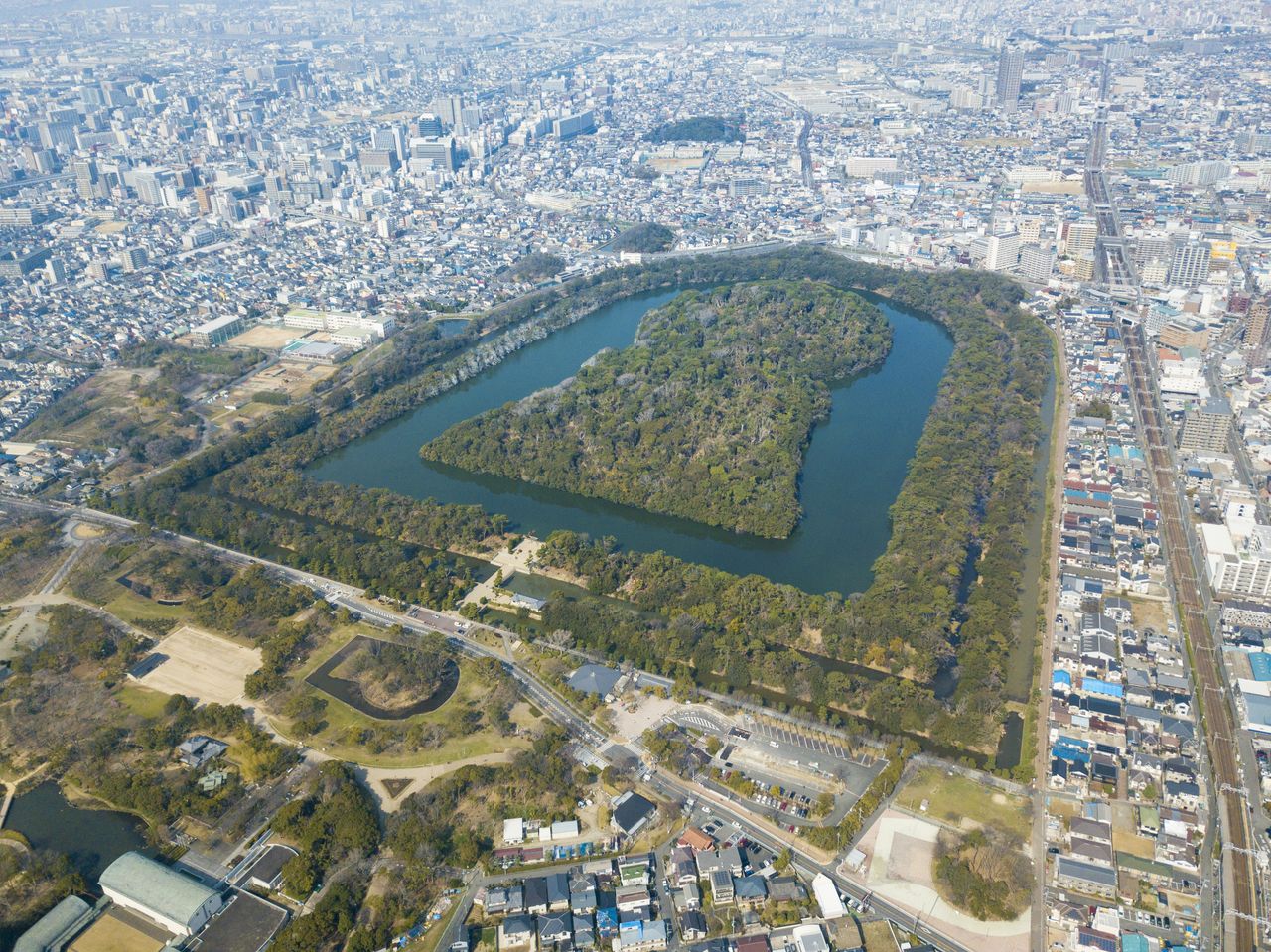 The Emperor Nintoku Burial Mound has three concentric moats. To the south of the site, in the lower part of the photo, is Daisen Park, which abuts the larger burial mound site.

The keyhole-shaped tomb itself is surrounded by three concentric moats, extending the length of this burial complex to a total of 840 meters, with a circumference of 2.7 kilometers. Based primarily on archaeological finds and documentary citations, it is estimated that the mound was built sometime in the mid-fifth century. The Japanese Imperial Household Agency administers the site on the presumption that it is the final resting place of Emperor Nintoku—said in legend to have ruled from 313 to 399 as the sixteenth in the traditional lineage of Japanese emperors, but generally held to have reigned in the early fifth century. As of this writing, though, it is still uncertain as to who is actually buried there.

There are 44 burial mounds of varying sizes all concentrated in the area around the Nintoku burial mound, forming an area collectively referred to as the Mozu burial grounds. To the east of Sakai are the Furuichi burial grounds, which range between the cities of Fujiidera and Habikino. These latter burial grounds include Konda Gobyōyama Kofun, the second-largest burial mound in Japan. This burial mound is said to be that of Emperor Ōjin, fifteenth in the traditional lineage of Japanese emperors, who reputedly ruled Japan from the late fourth to the early fifth centuries. Efforts are underway to have the Mozu and Furuichi burial grounds collectively designated the first UNESCO World Cultural Heritage Site to be located in Osaka Prefecture. 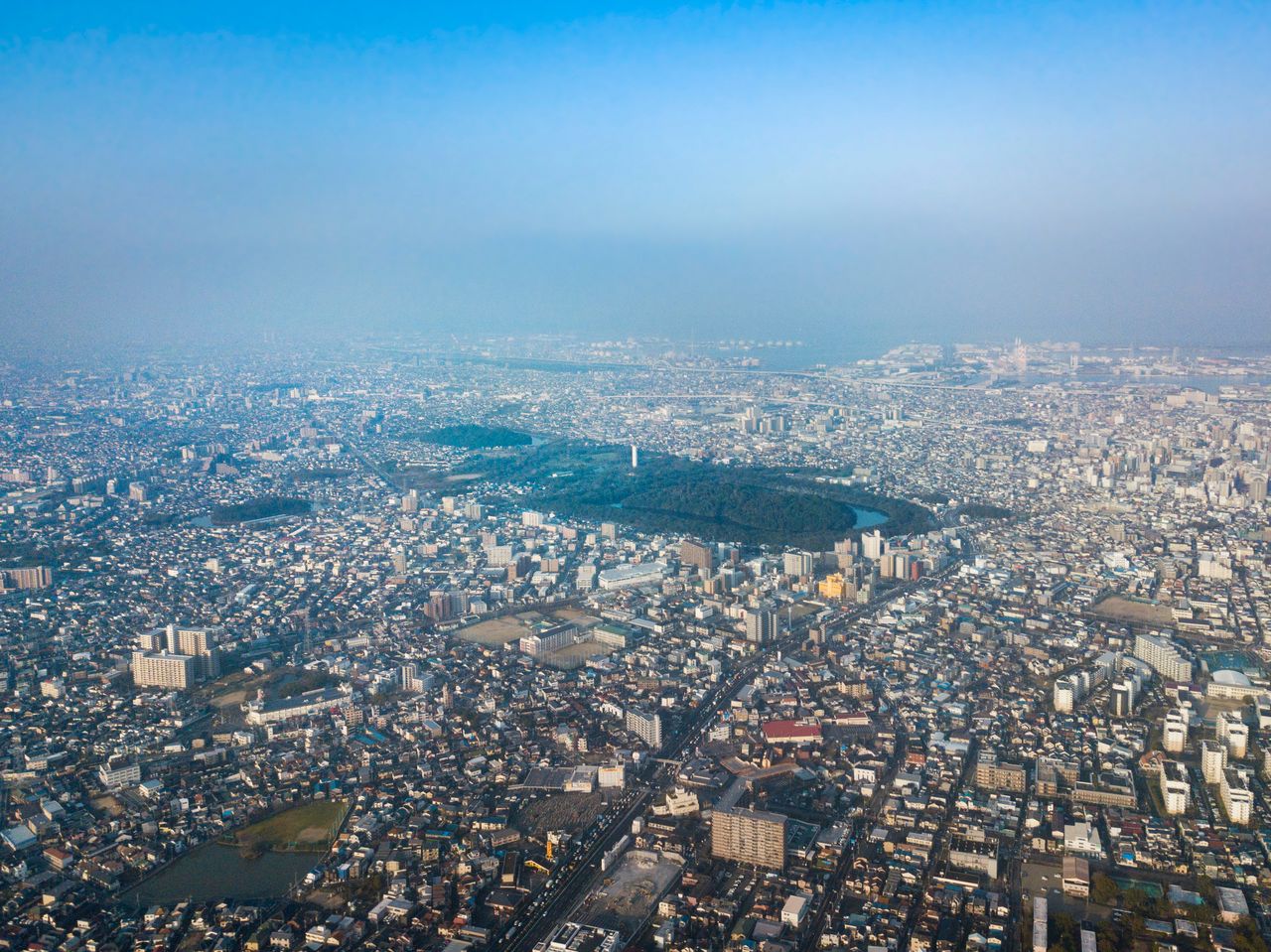 It is recommended that visits to the Mozu burial grounds begin at Daisen Park, just to the south of the tomb of Emperor Nintoku. Selected for inclusion on the lists of the top 100 municipal and historical parks in Japan respectively, the park is known for its displays of Japanese apricots and cherry blossoms alike in springtime. The park’s visitor center, located in the northern part of the grounds, stocks walking maps of the Sakai city area and other pamphlets, and also maintains a staff of volunteer tour guides. Bicycles are also available for rent here. Planning sightseeing routes at the center and embarking from there to see the Mozu burial grounds can help tourists use their time more efficiently. At the center of the park is the Sakai City Museum, where visitors can access virtual-reality content to take a virtual bird’s-eye tour of the Nintoku burial mound. 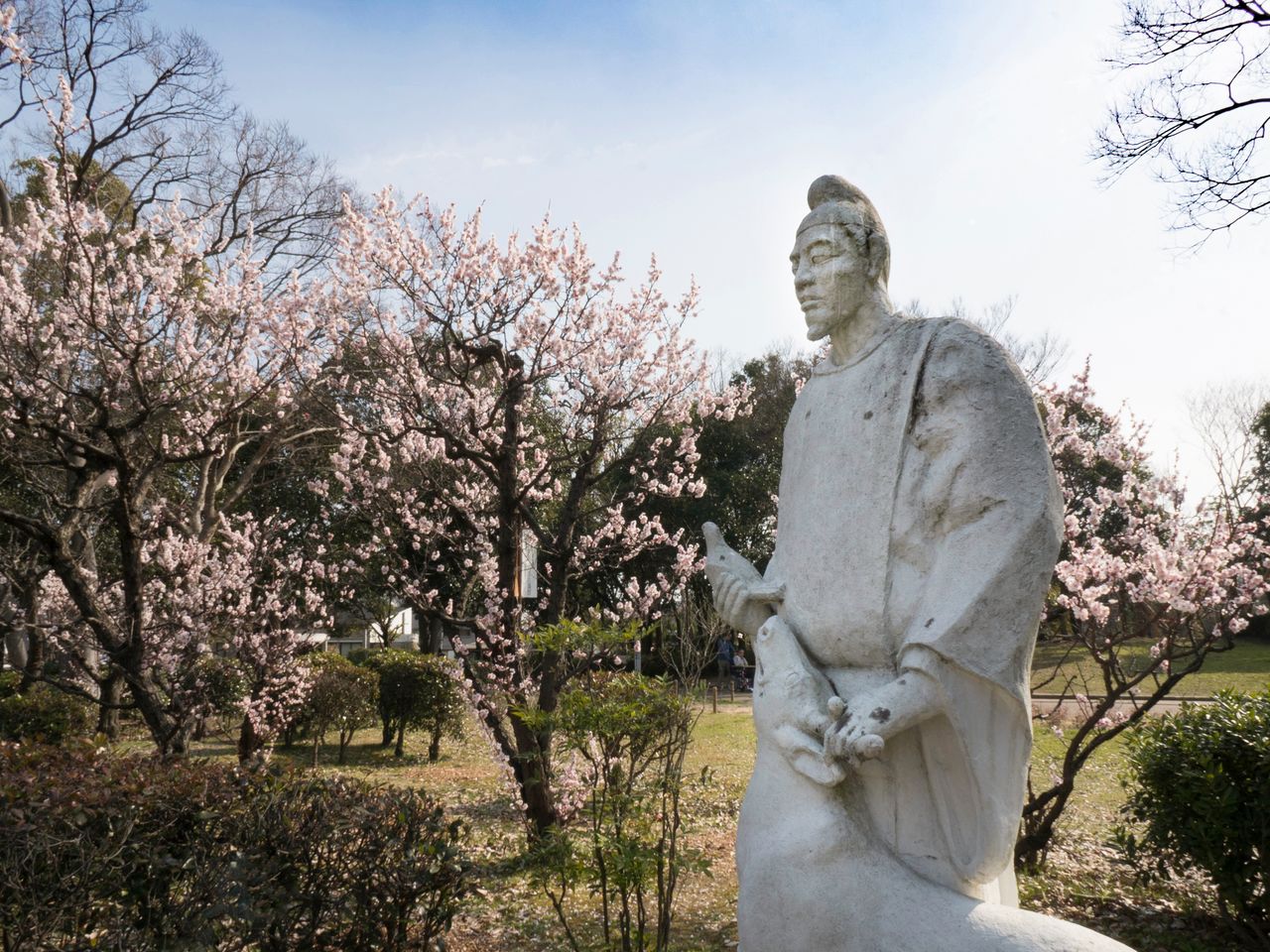 A walking path has been built around the tomb of Emperor Nintoku, allowing visitors to take in the lush greenery lining the moats. Taking rental bicycles is recommended, as a single circuit is 2.8 kilometers in length, and may take 40 minutes or more to cover on foot. A space is provided for visitors to pay their respects to the tomb’s occupant at the front of the burial mound, where it faces Daisen Park. Additional volunteer guides, identified by their yellow caps, are stationed here as well. These guides are highly knowledgeable about the mound and more than willing to lead visitors to recommended sites on the grounds. 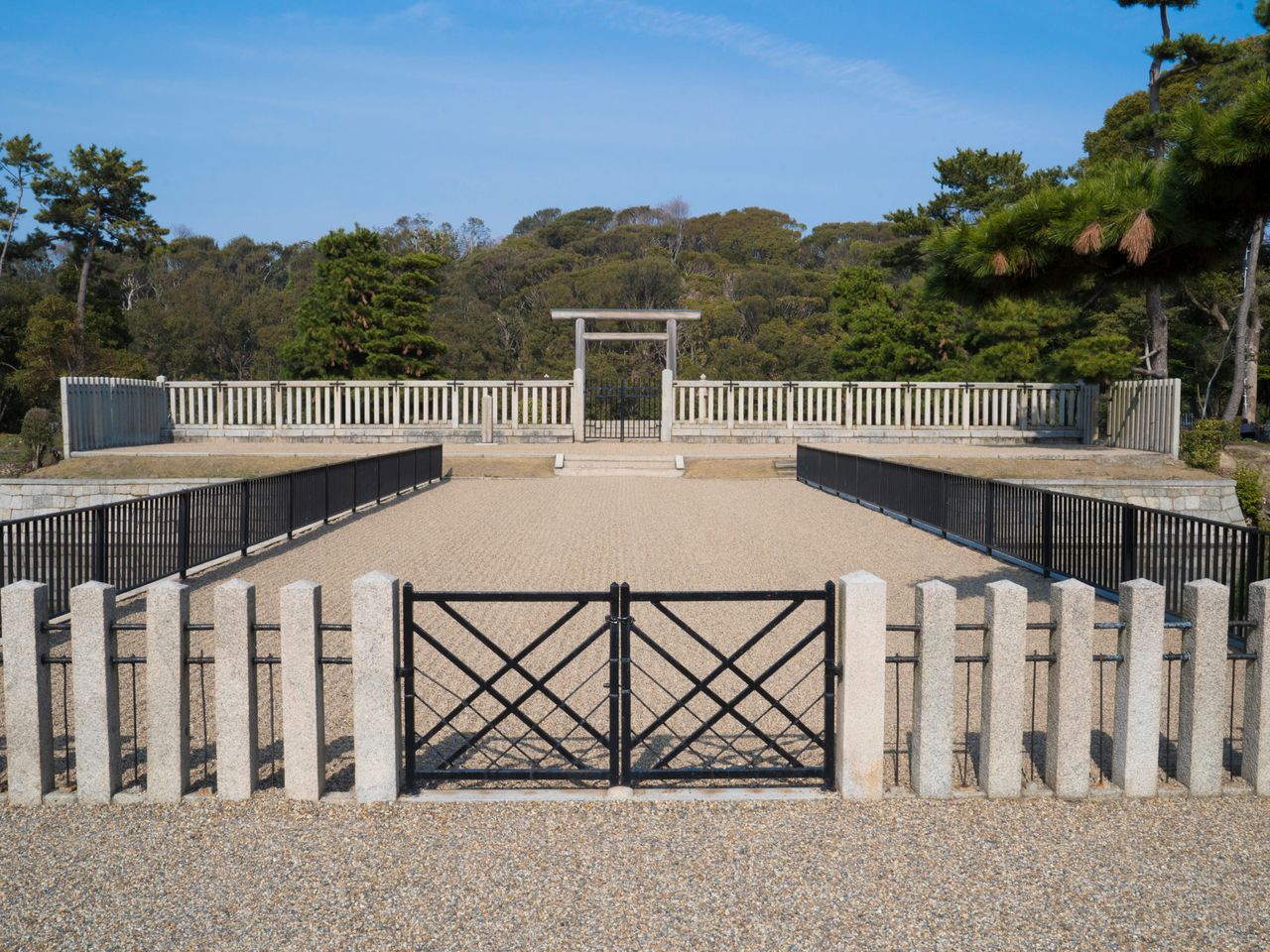 The Emperor Nintoku burial mound prayer space is the only spot where you can directly view the circular, aft part of the keyhole-shaped tumulus. 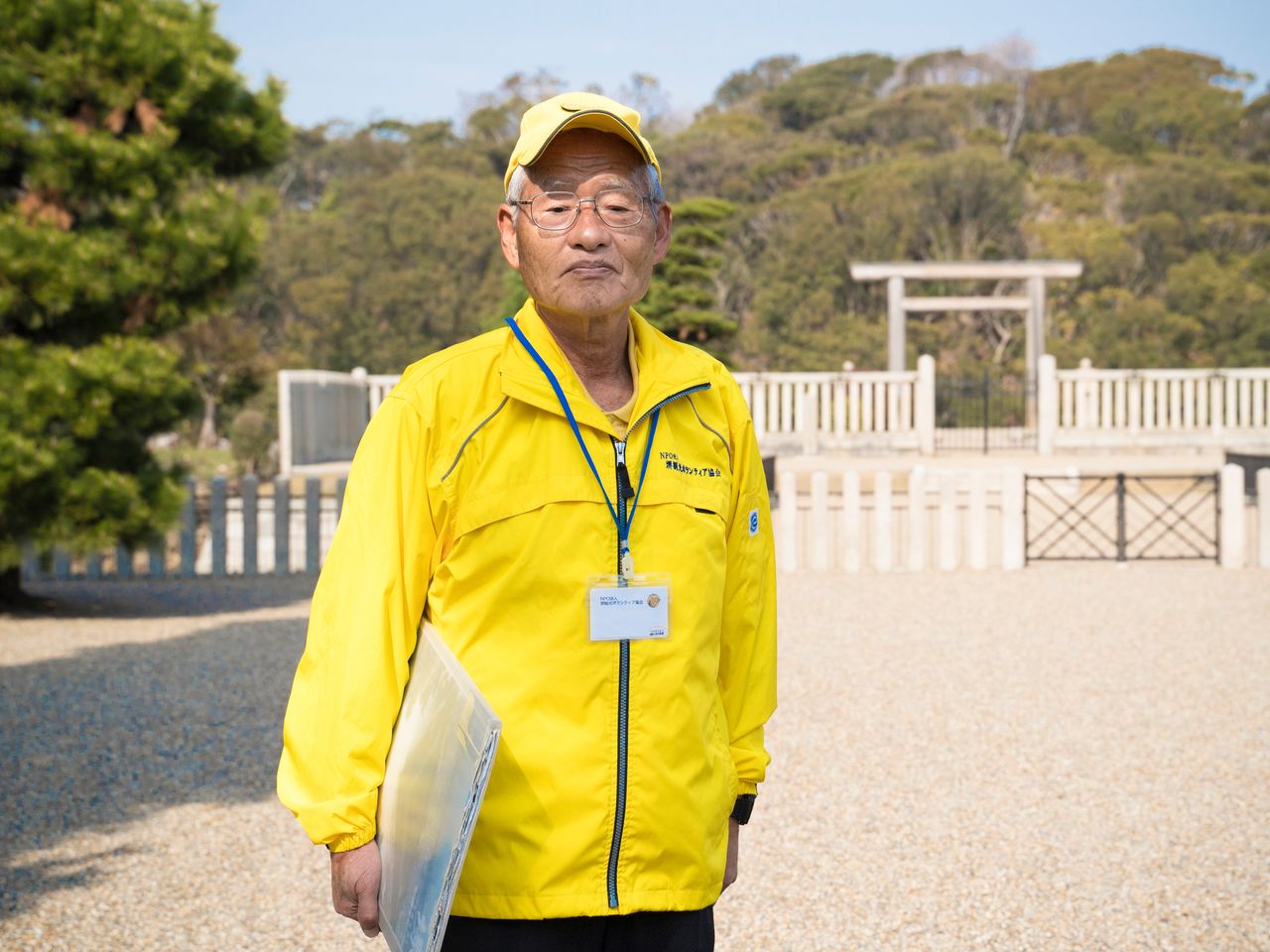 Locals serving as volunteer guides average over 70 years of age, and can be identified by their distinctive yellow caps and windbreakers. 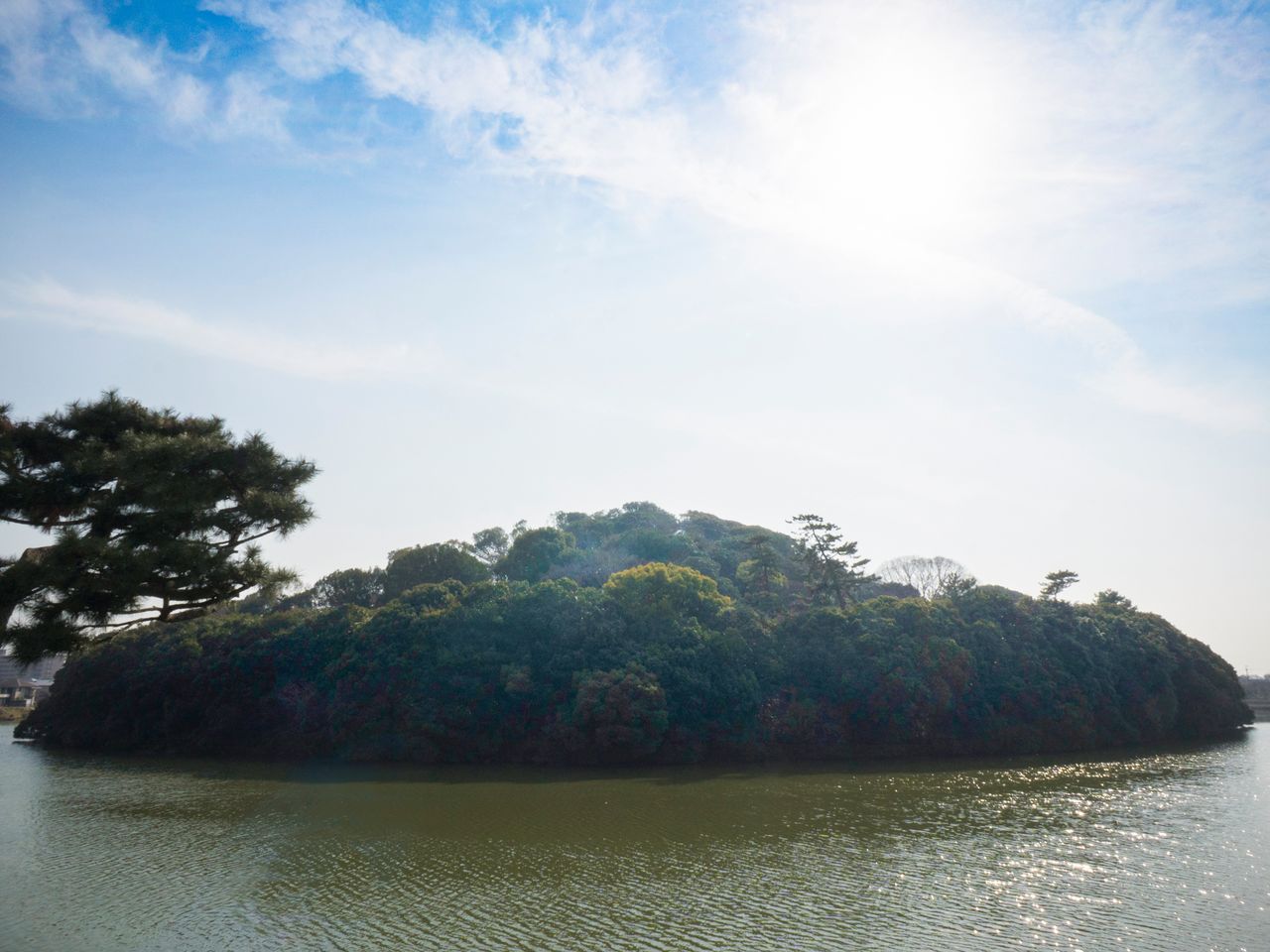 The circular rear portion of the tomb of Emperor Richū as seen from Daisen Park.

There are many other burial mounds within walking distance as well. Some of these are great mounds more than 200 meters in length, such as that of Emperor Hanzei (Tadeiyama Kofun), eighteenth in the traditional lineage of Japanese emperors, Nisanzai Kofun, and the aforementioned Gobyōyama Kofun. Others are smaller but nonetheless historically significant in their own right. Loire, a bakery near Mozu Station on the JR Hanwa Line, sells signature goods inspired by the keyhole shape of these mounds, including Goryō anpan (a bun with a bean-jam filling) and Nintoku meronpan (a bun shaped like a half-melon, made with artificial melon flavoring). These are the perfect snacks to take on a stroll among these burial mounds. 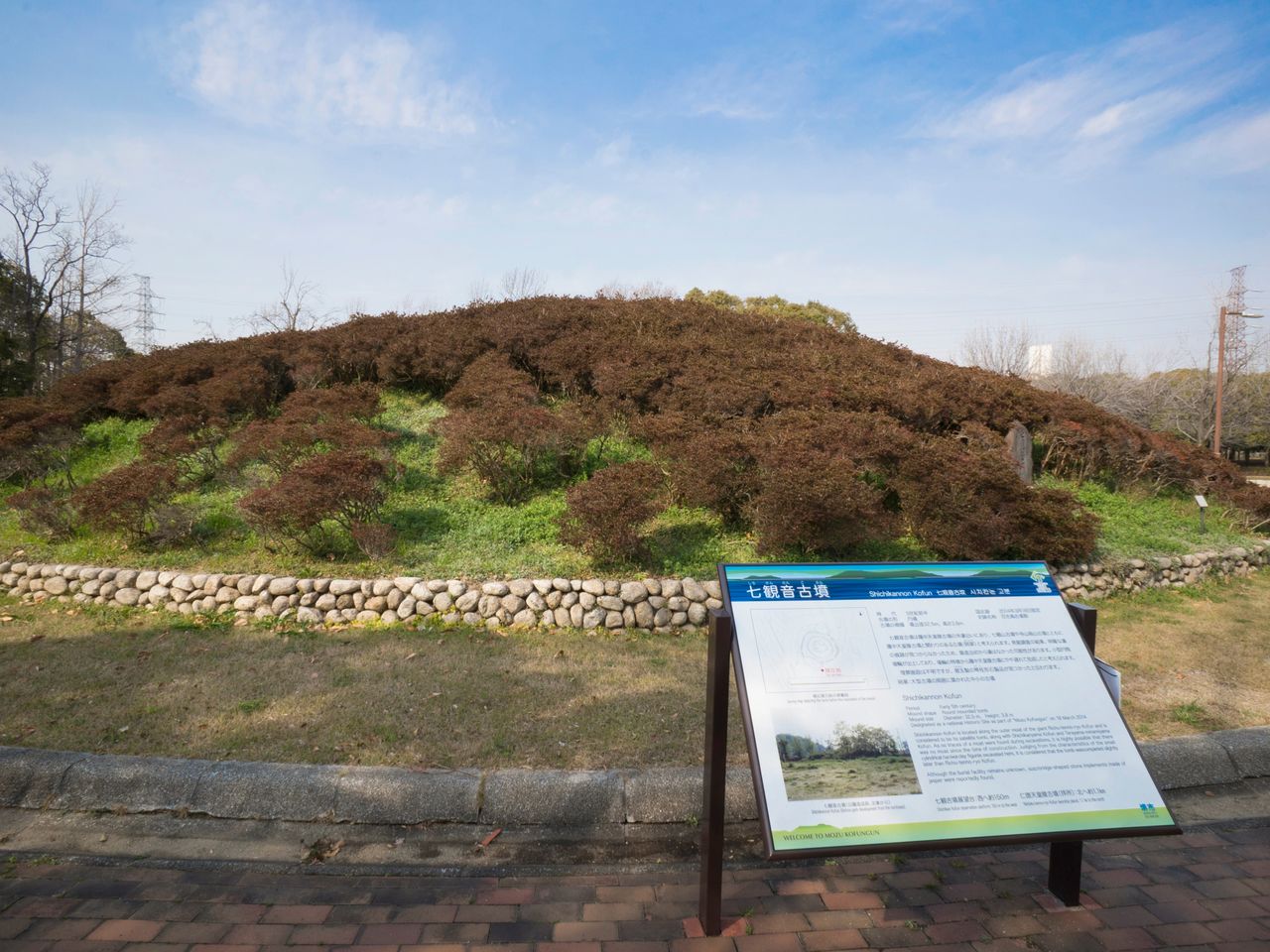 There are a number of smaller burial mounds within Daisen Park itself. 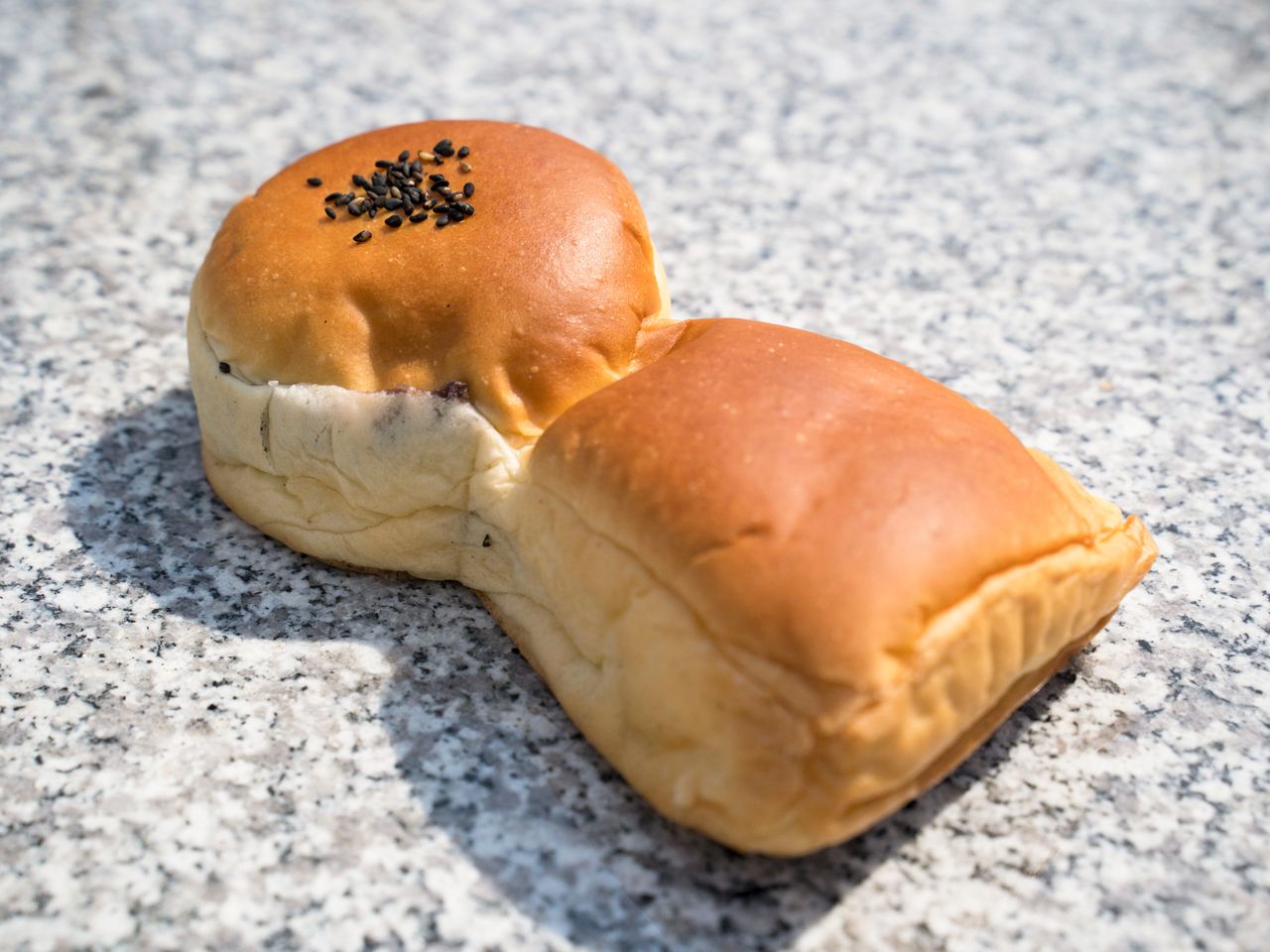 Goryō anpan, a signature product of the Loire bakery.

The View from City Hall

The sheer size of the tomb of Emperor Nintoku is such that one cannot fully appreciate it up close. To properly take it all in requires getting up above it in some fashion. Options include going up to Mikunin Hiroba, a rooftop garden at Mikunigaoka Station on the Nankai Kōya Line, or a footbridge south of Nagayama Kofun. The Sakai City Hall, however, is considered to offer the best view. 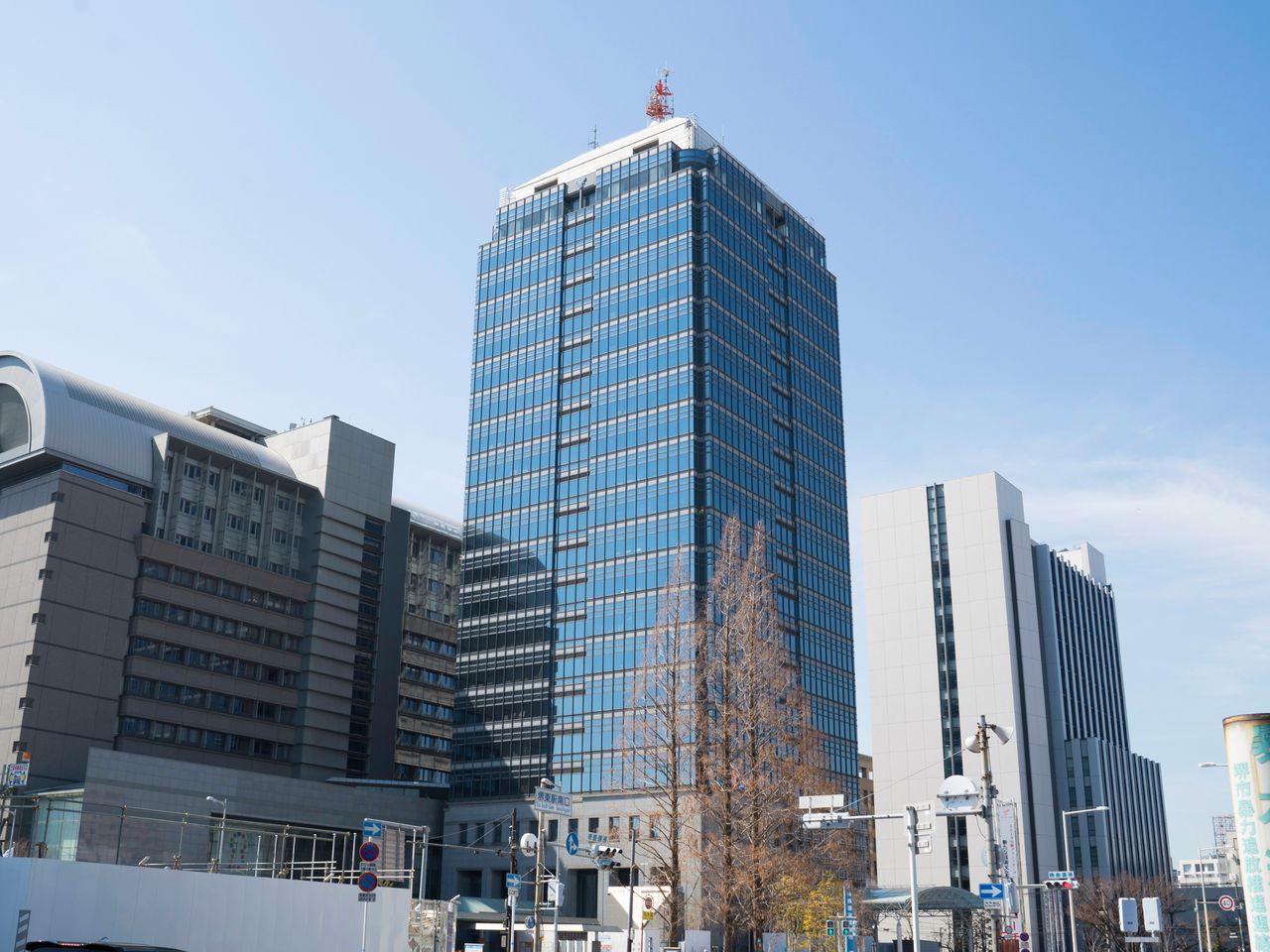 The Sakai City Hall tower is easy to spot and offers a free observation deck on its top floor.

The city hall is a 21-story glass high-rise fronting Sakaihigashi Station on the Nankai Kōya Line. Its top floor is an observation deck with free admission. The gallery-style layout offers a 360-degree panorama view of the surrounding area. The elevators open onto the view of the tomb of Emperor Nintoku and the immediately surrounding area, allowing visitors to grasp just how large it is by comparison with surrounding buildings. Even from here, however, the view is an oblique one; observers still cannot perceive the keyhole shape of the tumulus itself the way it can be depicted in aerial photography. As in Daisen Park, volunteer guides are on hand here as well to field queries from visitors, who are welcome to ask away as they do their best to imagine the overall form of the barrow. 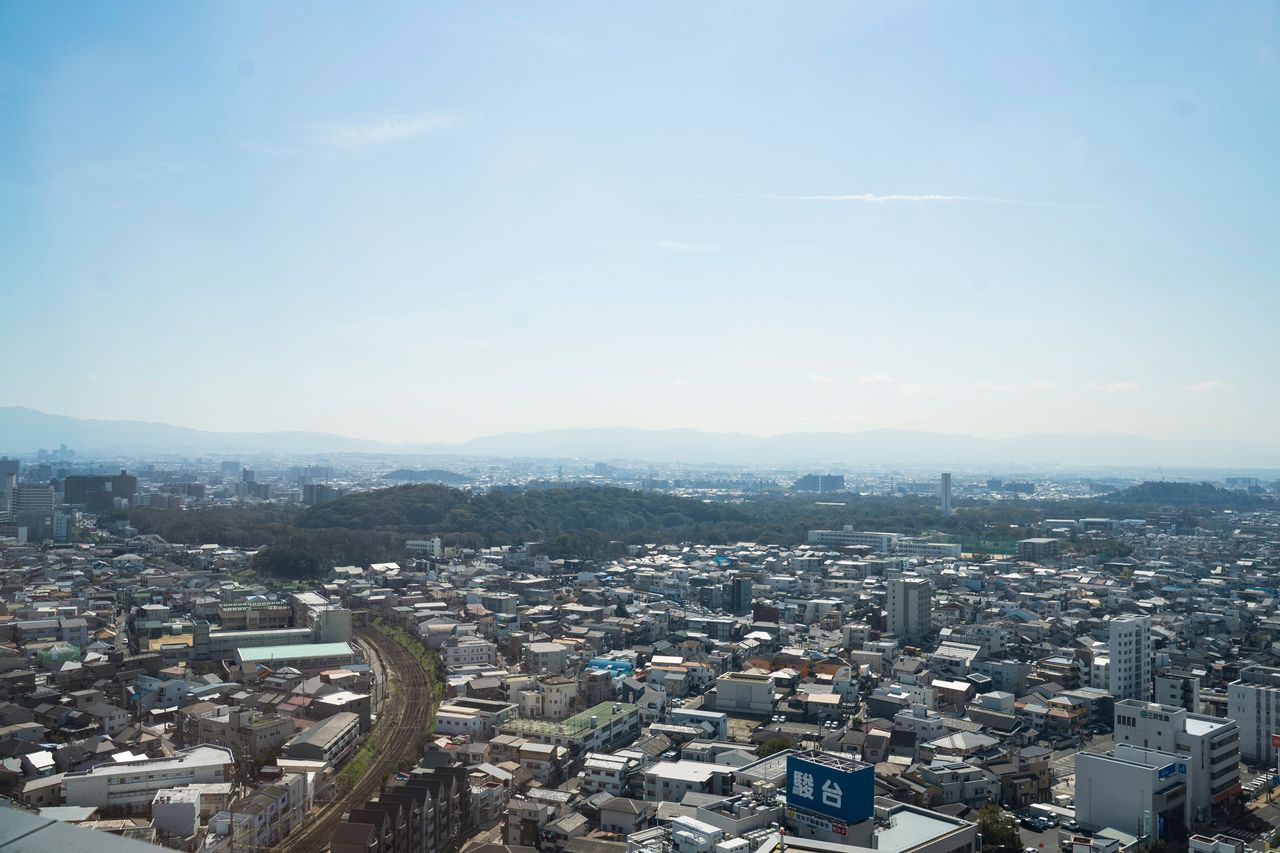 Surrounded by urban landscapes, the tomb of Emperor Nintoku appears from afar like a patch of primeval forest. 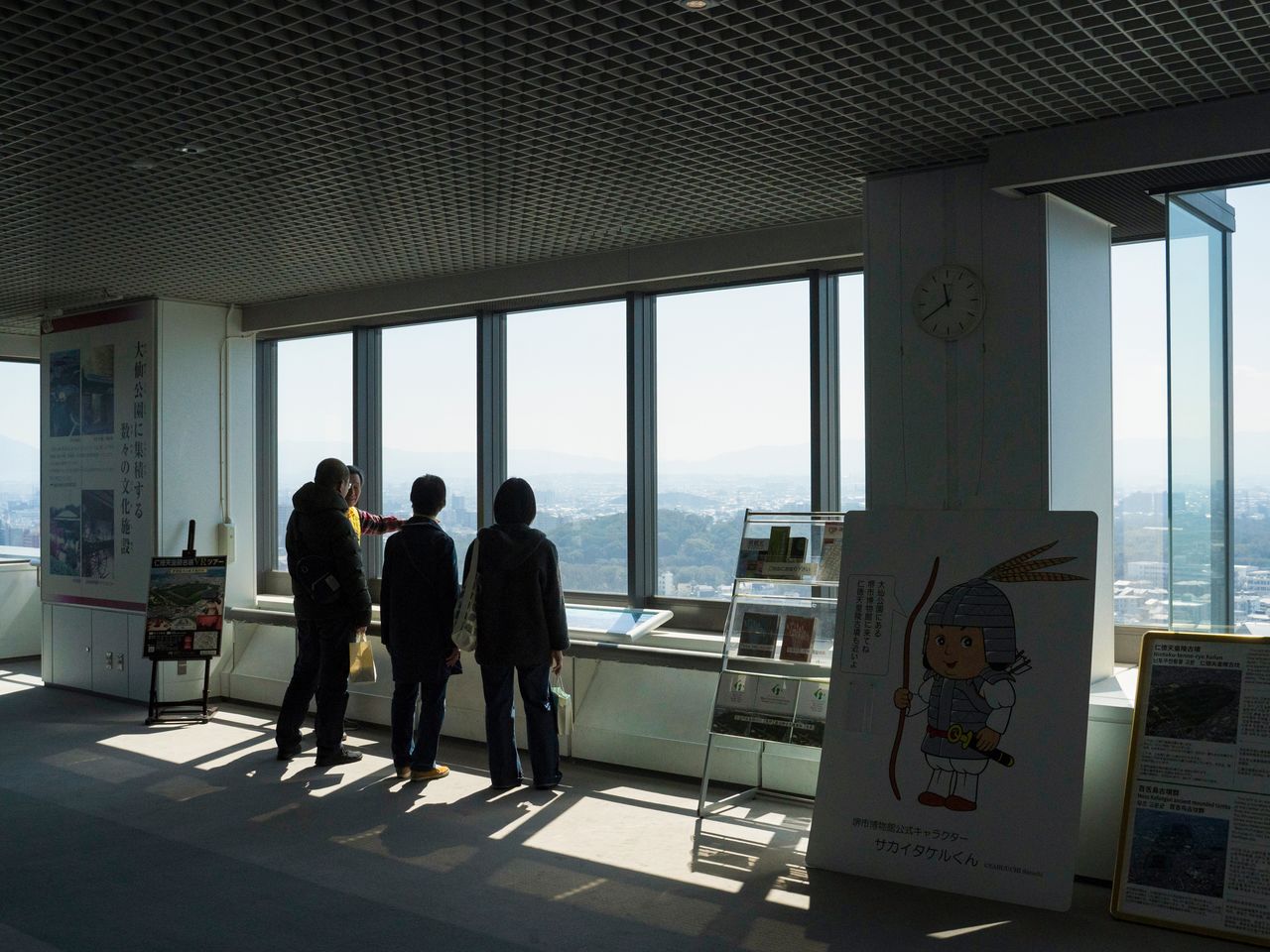 Display panels and descriptions given by tour guides make for an enjoyable visit to the Sakai City Hall observation deck. Admission is free.