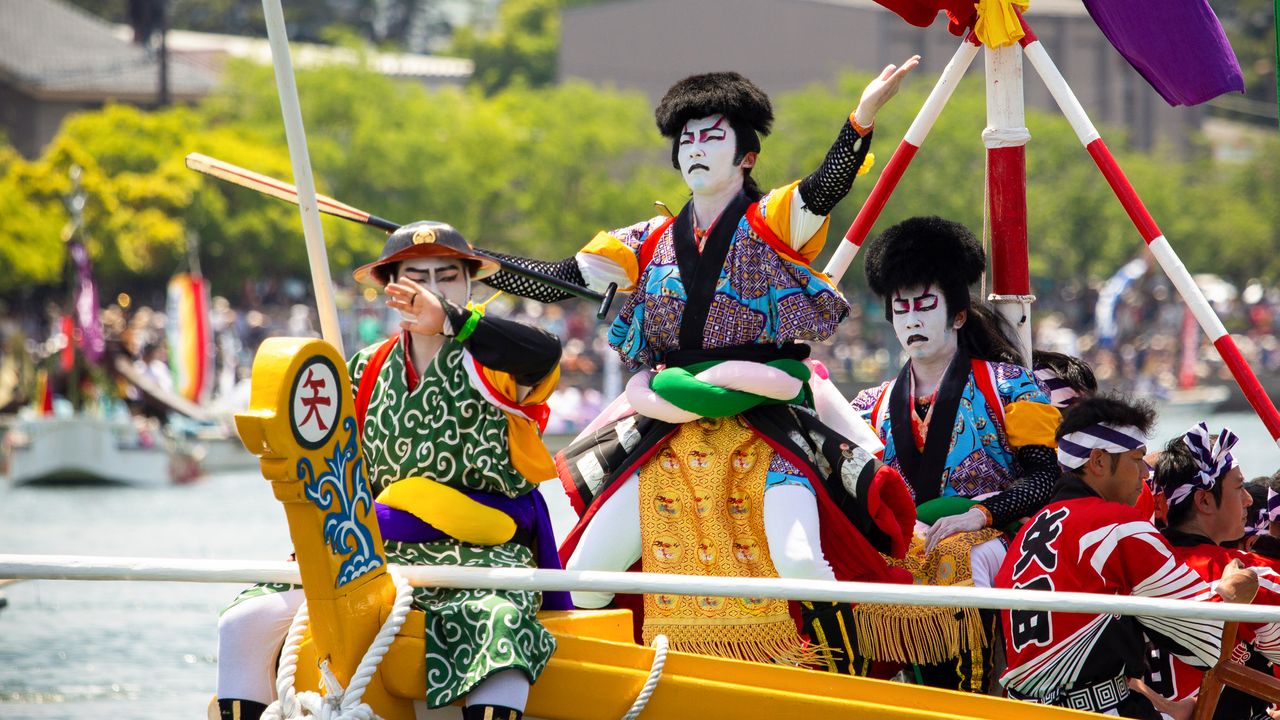 One of Japan’s Great River Festivals

In Matsue, a city in Shimane Prefecture, the chants of sailors crewing kaidenmasen (a type of rowed barge) reverberate all along the Ōhashi River, which flows between Lake Shinji and the Nakaumi lagoon. In the bow of each such boat are kengai, performers made up like kabuki artists who, in time to these chants, put on a show of brandishing oars as though they were swords. Meanwhile, onnagata (male kabuki artists playing female characters) playing the part of zaifuri (crew leaders) dance elegantly in the stern. And crowds of spectators on bridges and riverbanks alike give enthusiastic ovations to this pageant of some 100 boats. 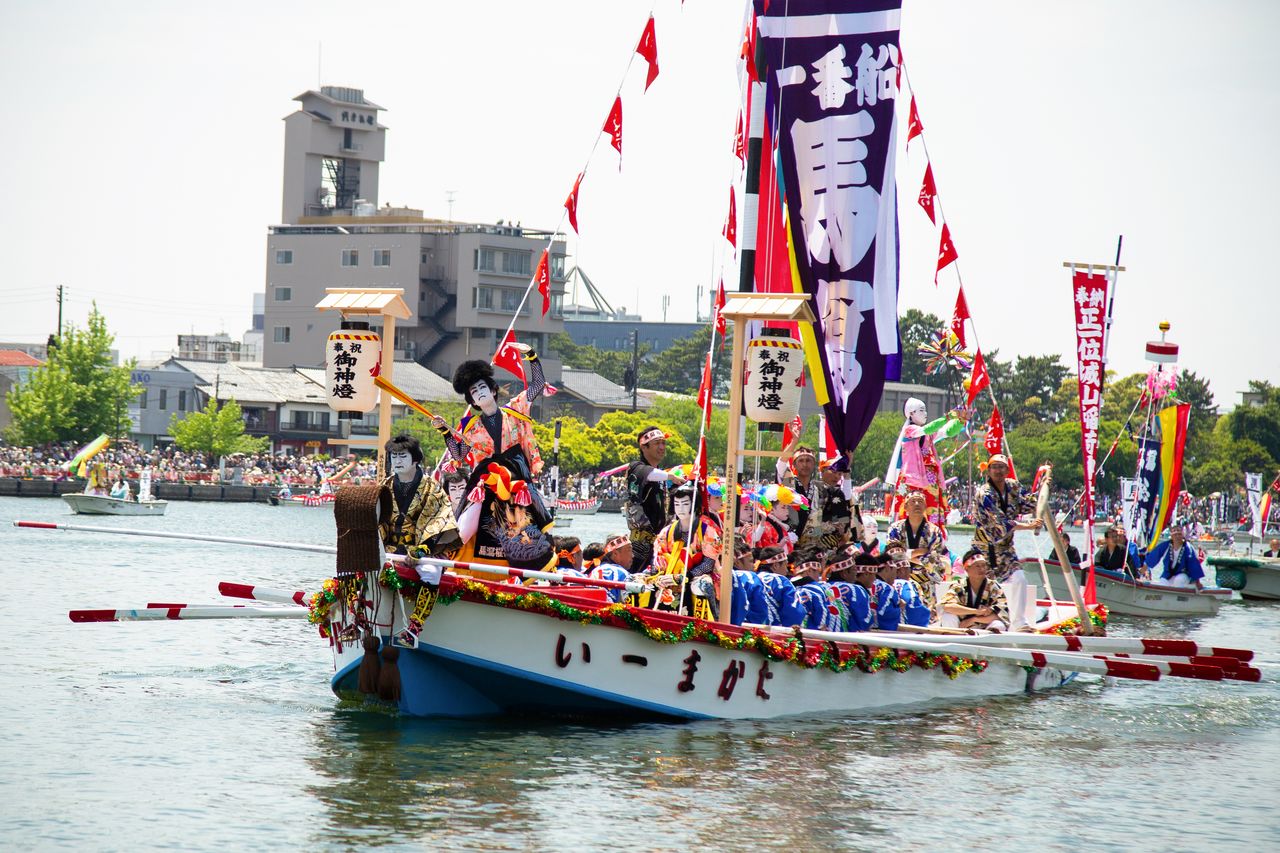 A brilliantly decorated kaidenmasen, complete with kengai performing elegantly in the bow.

This is a scene from the Hōran En’ya, which ranks with the Osaka Tenjin Festival and the Hiroshima-Miyajima Kangen Festival as one of the top waterborne Shintō rituals in Japan.

The Hōran En’ya is reputed to have originated in 1648, when concerns about the possibility of severe rice crop failures followed a prolonged period of unfavorable weather that year. Such worries motivated Matsudaira Naomasa (1601–66), the local clan lord, to transport, via a shrine-bearing boat intended for the purpose, a casket of the spirits of Jōzan Inari Shrine, where he himself worshiped. His destination was Adakaya Shrine, some 10 kilometers away (though still in Shimane) in the town of Higashi-Izumo. Once there, he had prayers given asking for bumper crops. When a good harvest did come in that year, a shinkōsai (a Shintō festival centering on an object of worship) in which boats go back and forth between the two shrines was inaugurated as a commemorative ritual to be conducted every 10 years thereafter. 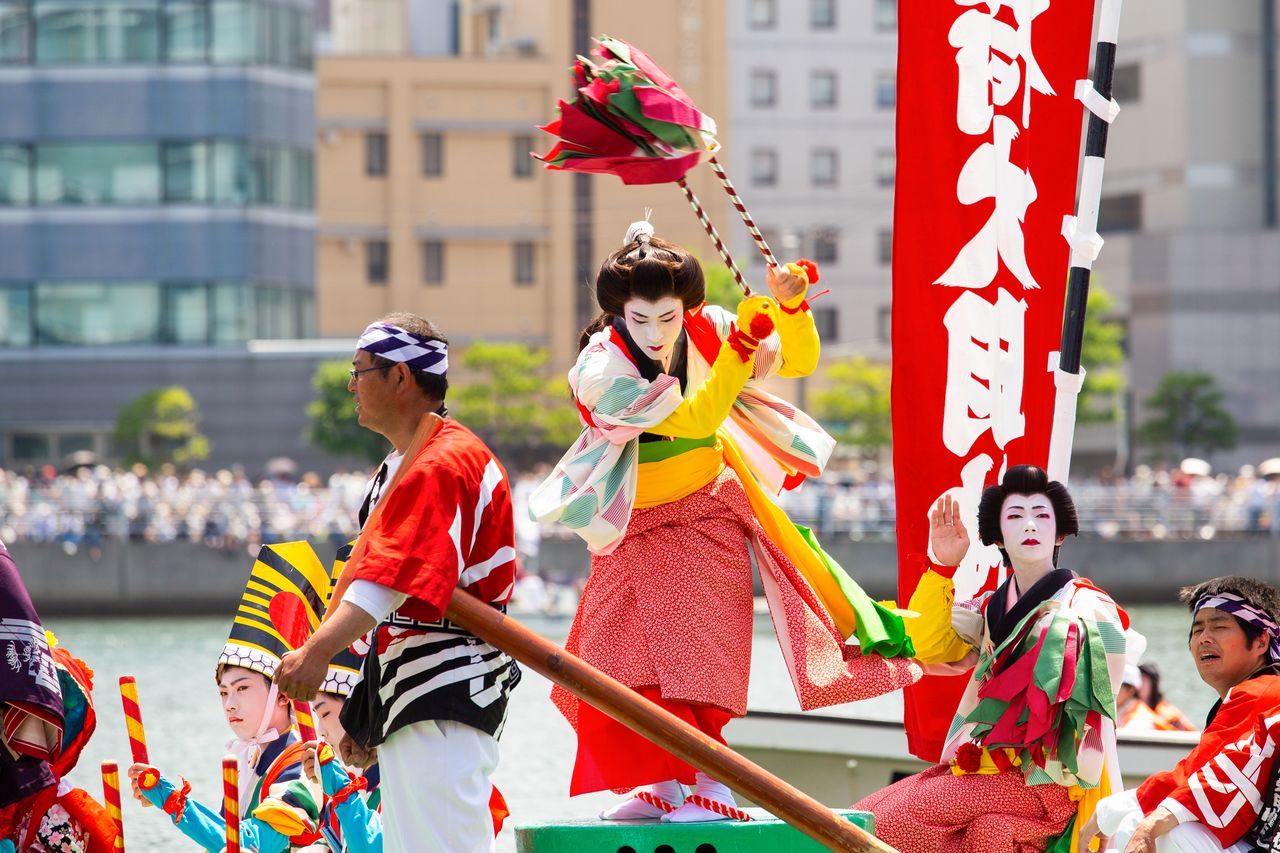 An onnagata zaifuri dances charmingly in the stern of a boat.

The highlight of the festival is the Kaidenma-odori, a ritual dance performed on the deck of the kaidenmasen barges traveling with the shrine vessel boat. The hulls of the kaidenmasen, said to have originally been net-fishing boats modified for use in the festival, are 15 meters long and 3 meters wide at their maximum, capable of carrying 50 people at a time, and decorated with colorful banners, garlands, and streamers.

The perfectly coordinated crew control that guides the boats is made possible by the ondotori (pacesetter) and the kaikaki (rowers) chanting in time to the beat of the Japanese taiko drums. In response to the resonant chants, the kengai strike their gallant poses, and the zaifuri dance gracefully, holding bamboo sticks topped with brightly colored strips of cloth. 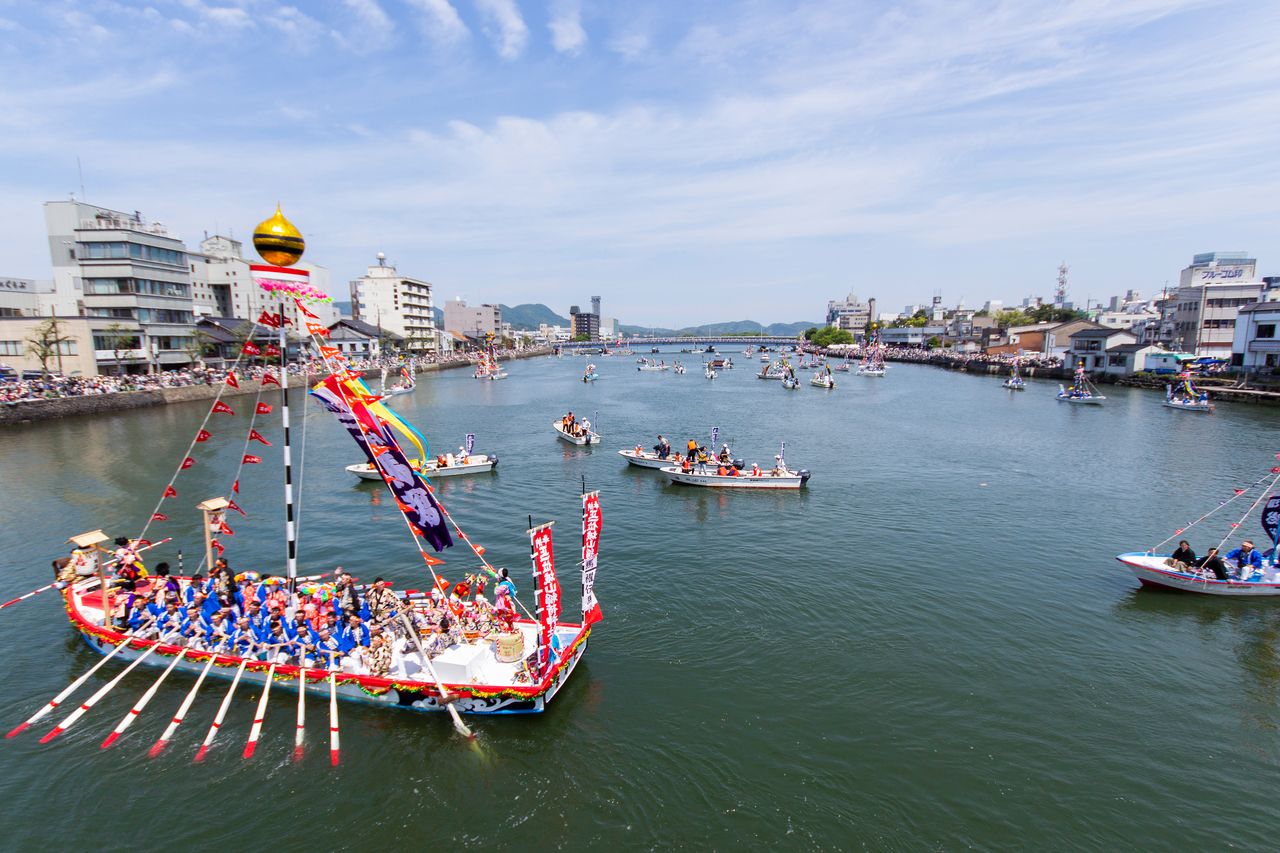 Chanted directions guide the kaidenmasen among the many other boats on the Ōhashi River. 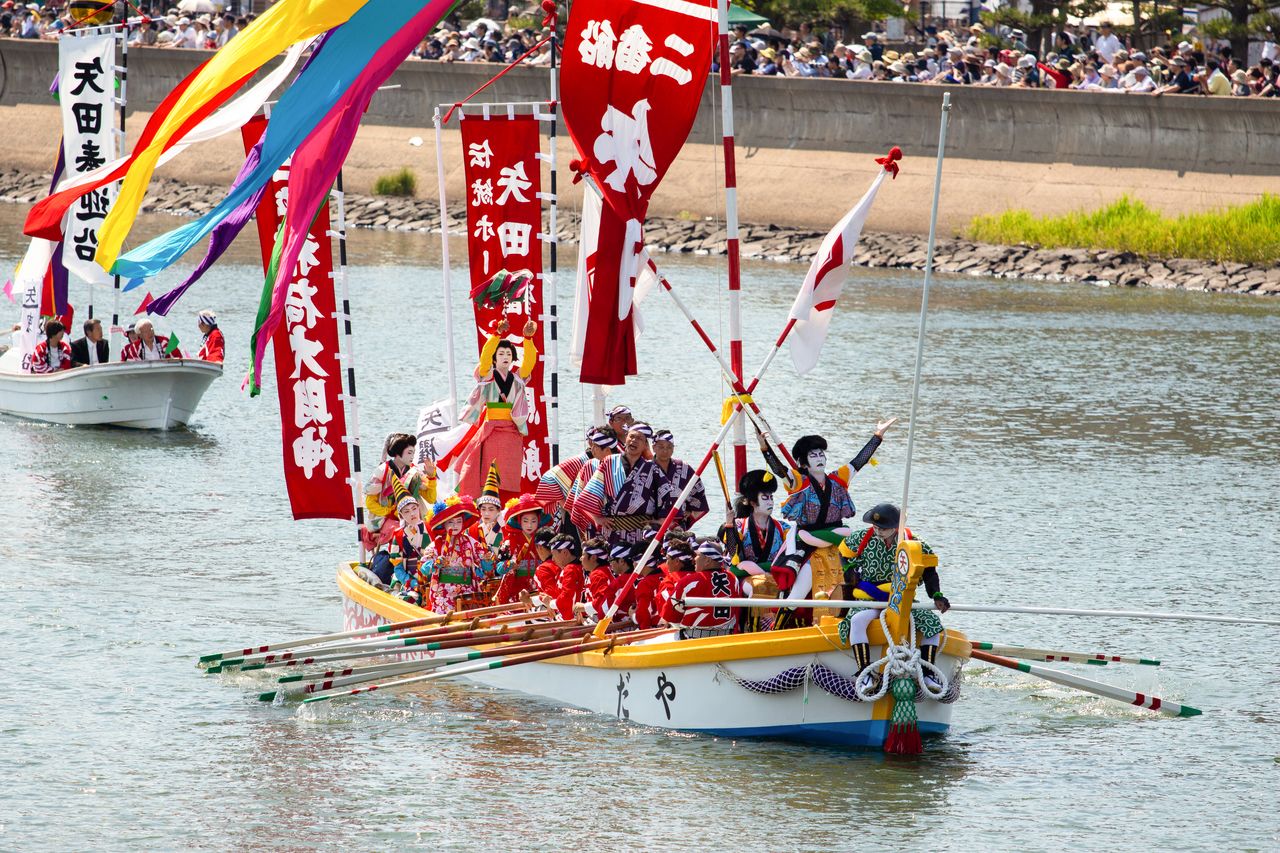 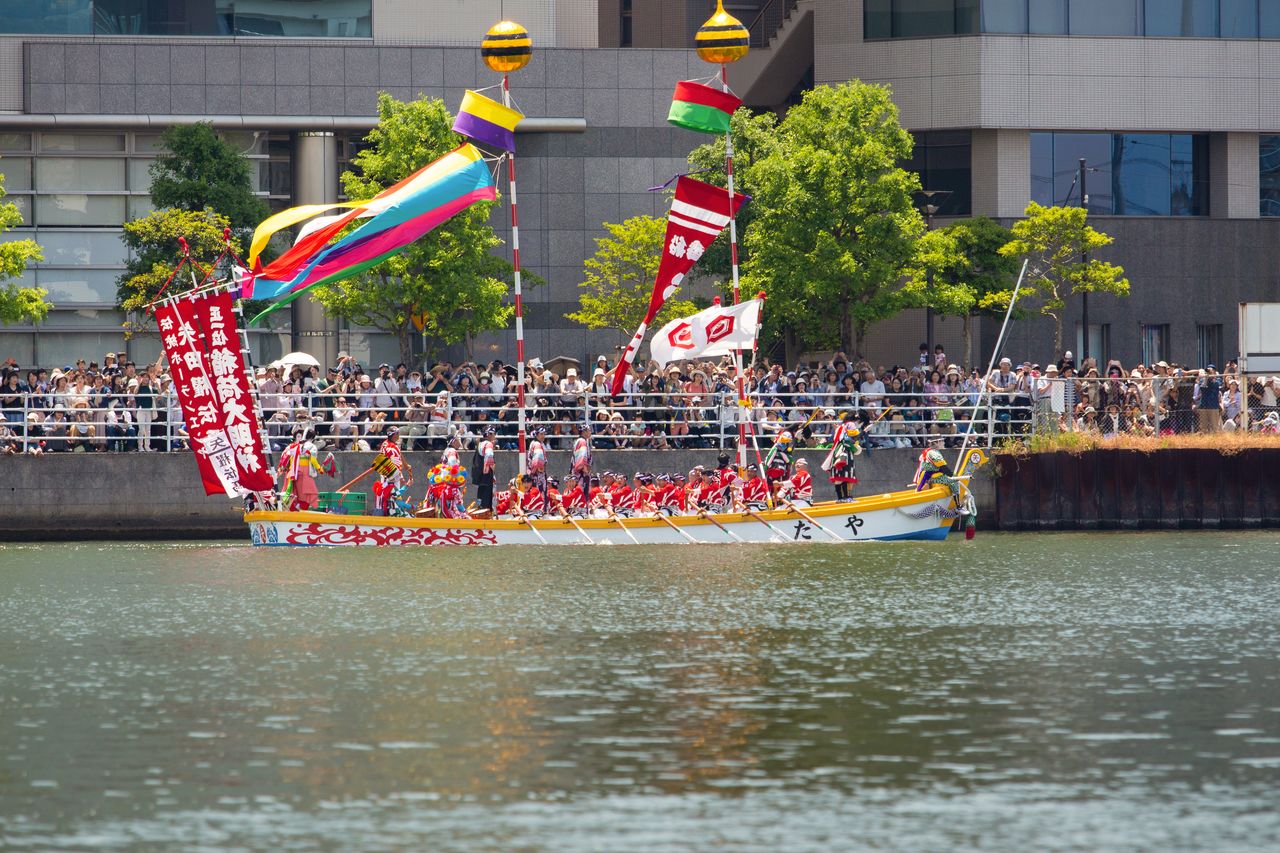 Spectators line the riverbank near Kunibiki Bridge as a kaidenmasen goes by. 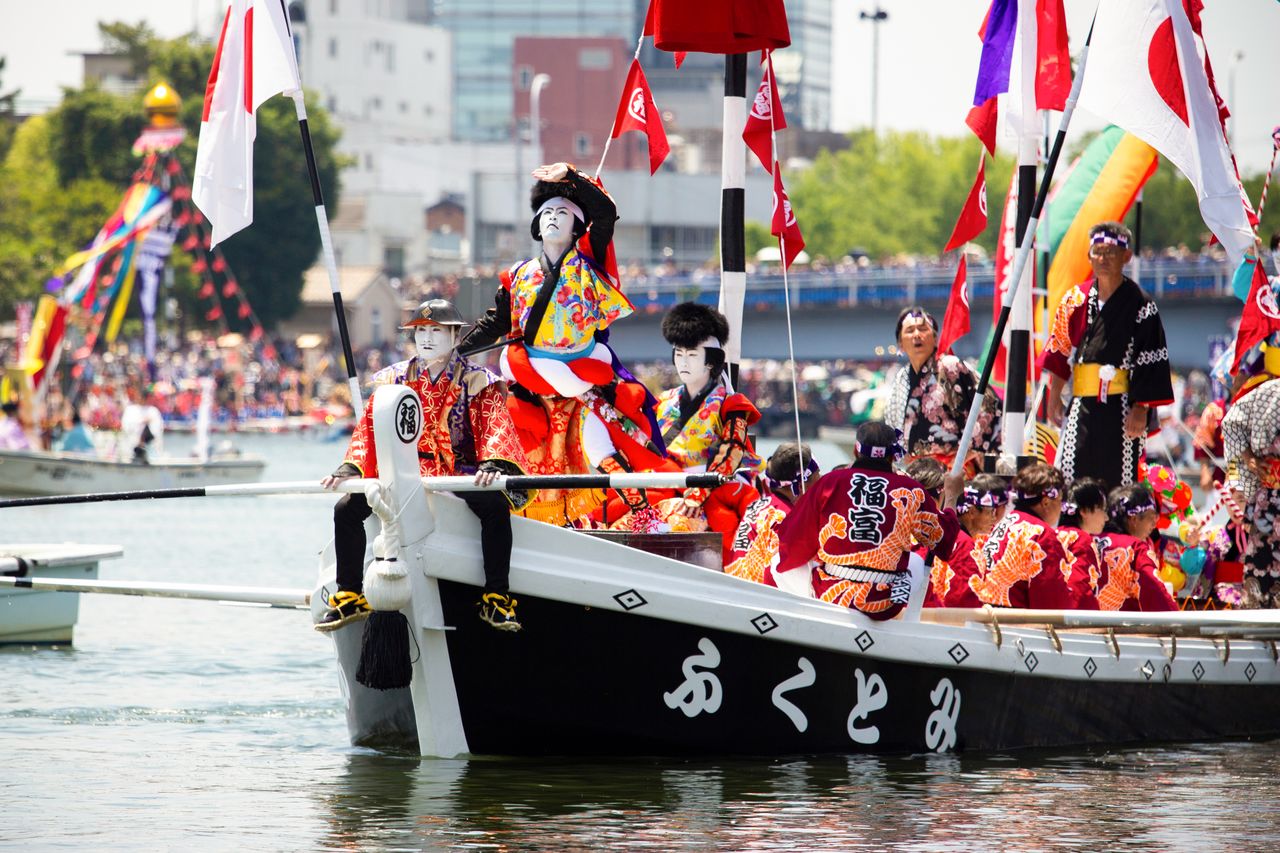 Songs and Dances for Helpful Fishermen

The present elaborate spectacle dates back to a storm in 1808, when fishermen from the village of Makata, near the mouth of the Ōhashi River, rescued the sinking shrine boat and towed it to its destination. As it became customary thereafter for boats from Makata to participate in the ritual as towing boats, fishermen from areas near Makata also came to participate in this fleet with each festival. Specifically, these other fishermen came from the neighboring regions of Yada, Ōi, Fukutomi, and Ōmisaki. It is said that these regions first assembled in this way in 1848, and that that was when the chanting and the dancing of the Kaidenma-odori were first performed on the decks of the kaidenmasen. Eventually, these regions came to be collectively known together with Makata as the “Five Lands.” 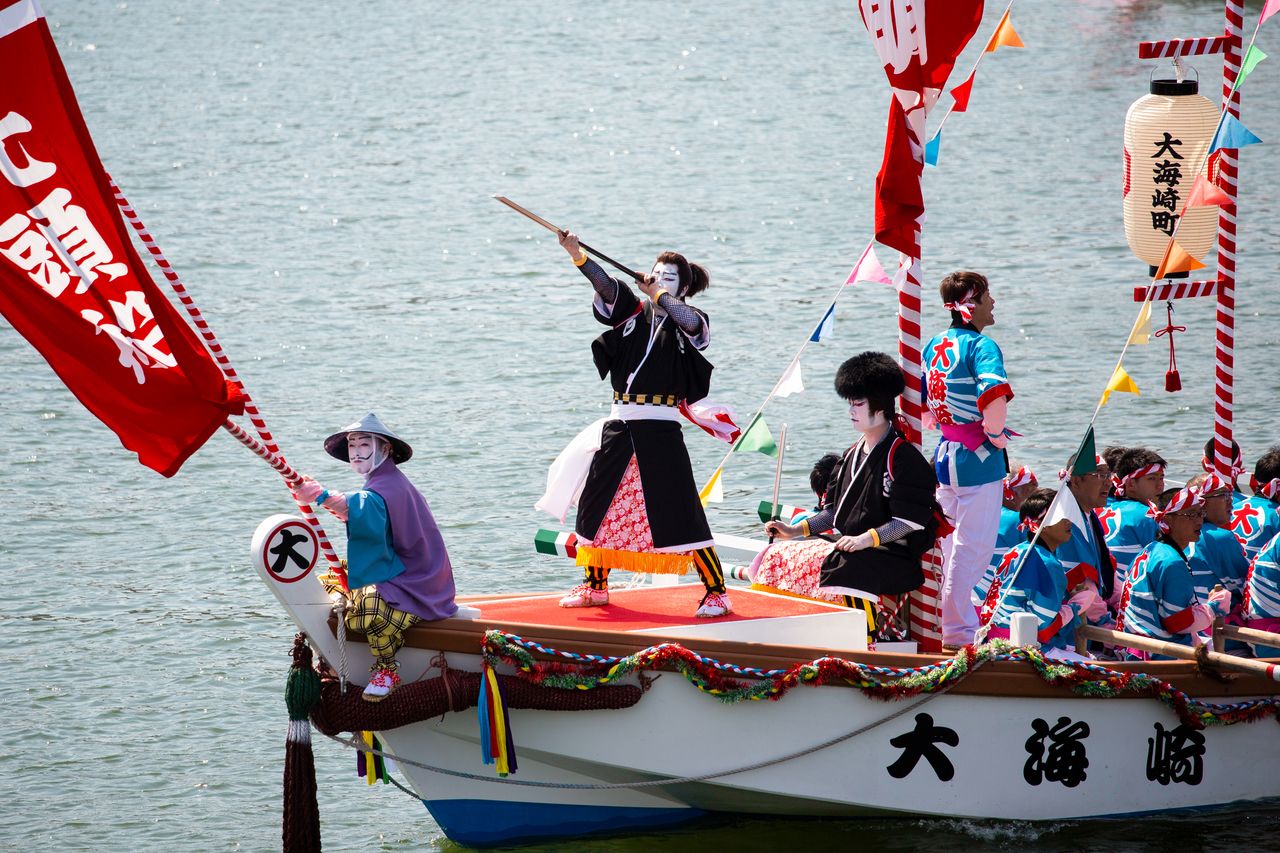 The kengai are themselves dressed in a variety of costumes. The Ōmisaki crew stand out among the gaudy colors of others’ costumes with their more restrained, basic black look.

The present-day name for the festival, Hōran En’ya, comes from the call-and-response words in the chants of the kaikaki rowers. While no definite meaning can be discerned, it has been written in kanji to mean “good harvests and prosperity” or “riches and longevity.” The enya part is said to be derived from eiyā, a call used by the fishermen when pulling in their nets. It is thus believed that the festival’s title expresses a wish to draw good harvests and prosperity to oneself. 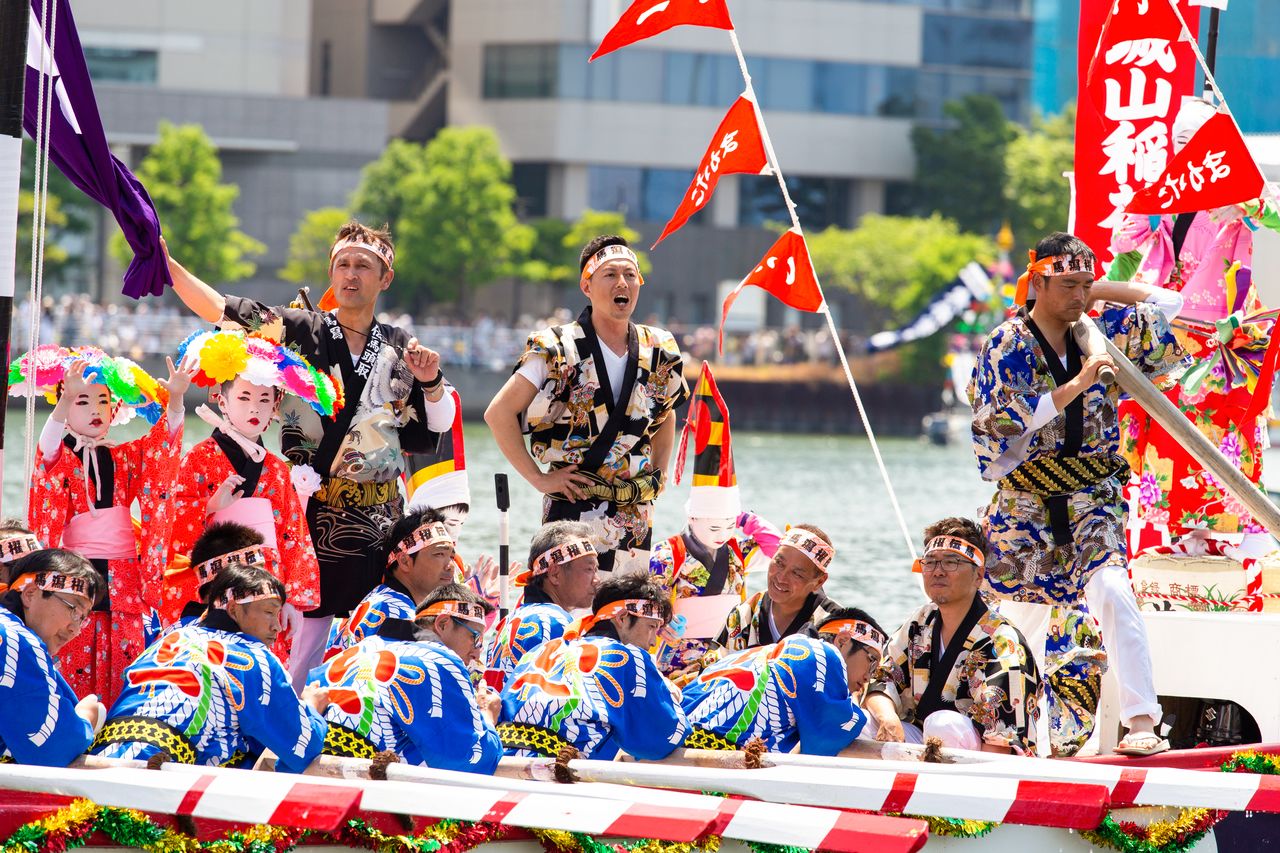 The kaikaki rowers shout out in response to the calls of the ondotori.

The chants of each of the Five lands have their own distinct characteristics. Add to this the variations in the movements and costumes of the kengai and zaifuri, and spectators can get more out of the festival by comparing the sights and sounds of the different performances. The kaidenmasen are referred to by number, one through five, in the order that each region joined the procession. The Makata boat, the first, has inoichi painted before its region name, signifying its honorable history of being first to provide aid during the historical storm that threatened the casket of Shintō spirits. 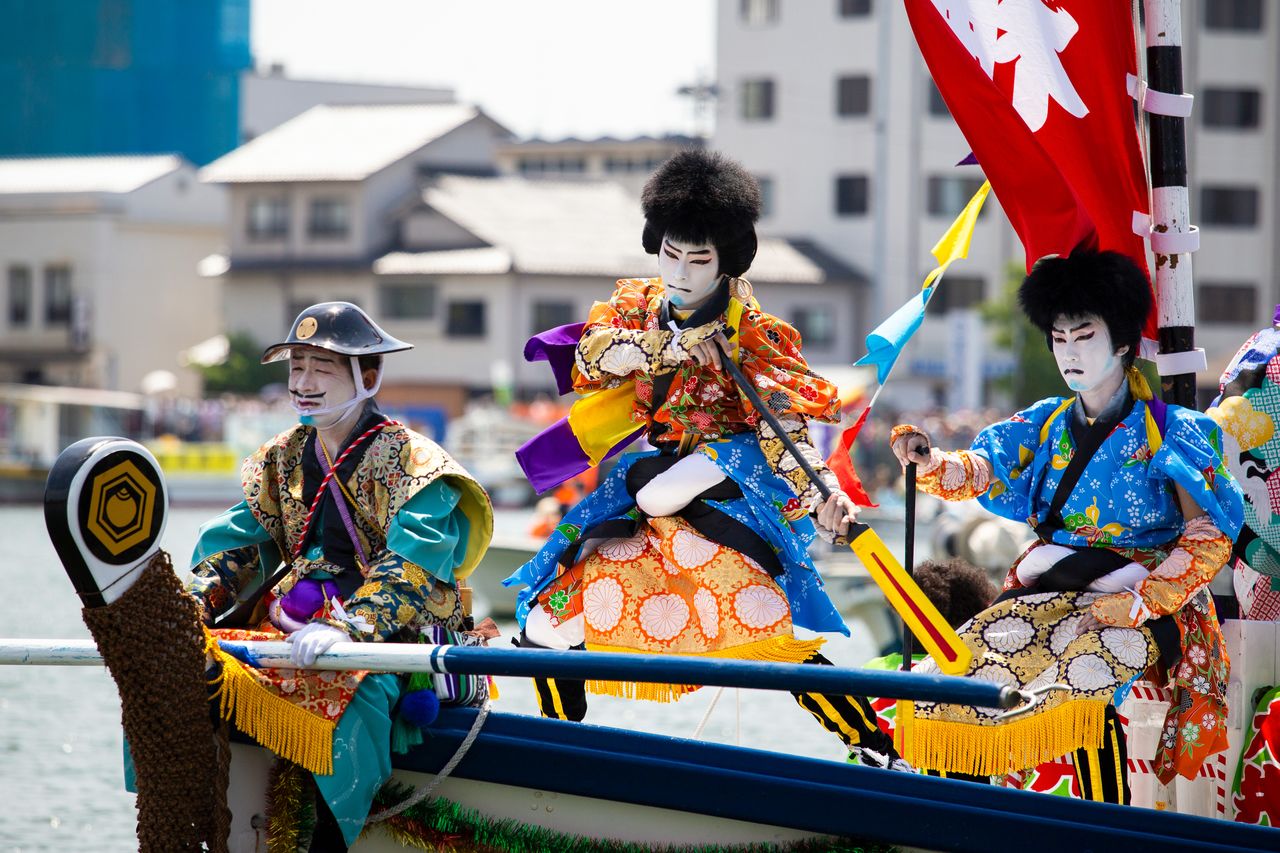 The kengai of Ōi, in their florid costumes, are popular with spectators for their thrilling dance moves. 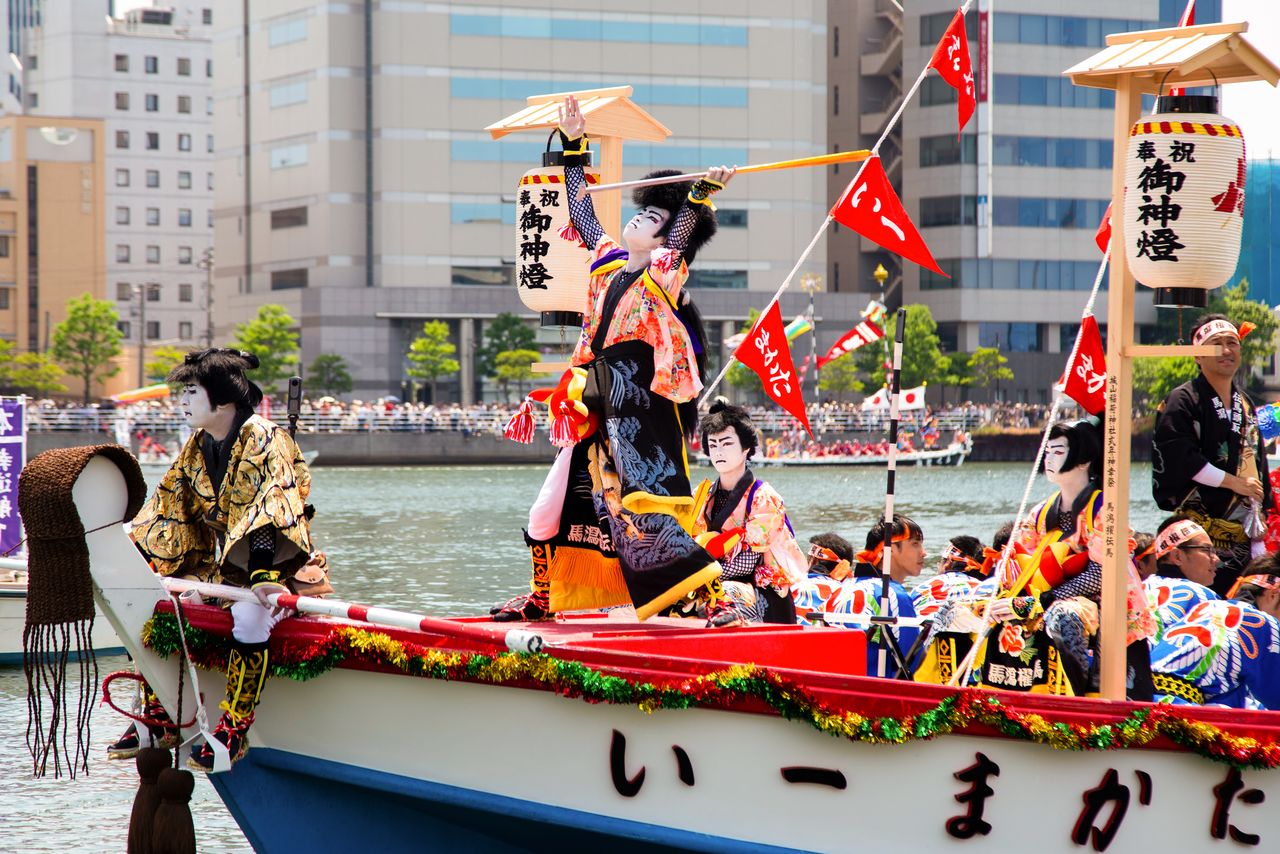 The kengai of Makata proudly issue their cries from atop the inoichi mark on their vessel.

The scheduling of the festival was changed from every 10 years to every 12 years beginning in the late Edo period (1603–1868). A decision was made following the 2009 festival, however, to return to the original schedule of once a decade. The next gathering will take place in 2029.

Because so much time passes between the festivals, the Matsue Hōran En’ya Memorial Hall is available to present their attractions and history to visitors. The hall is also close to Matsue Castle and the Matsue History Museum, making it convenient for tourists in the area. 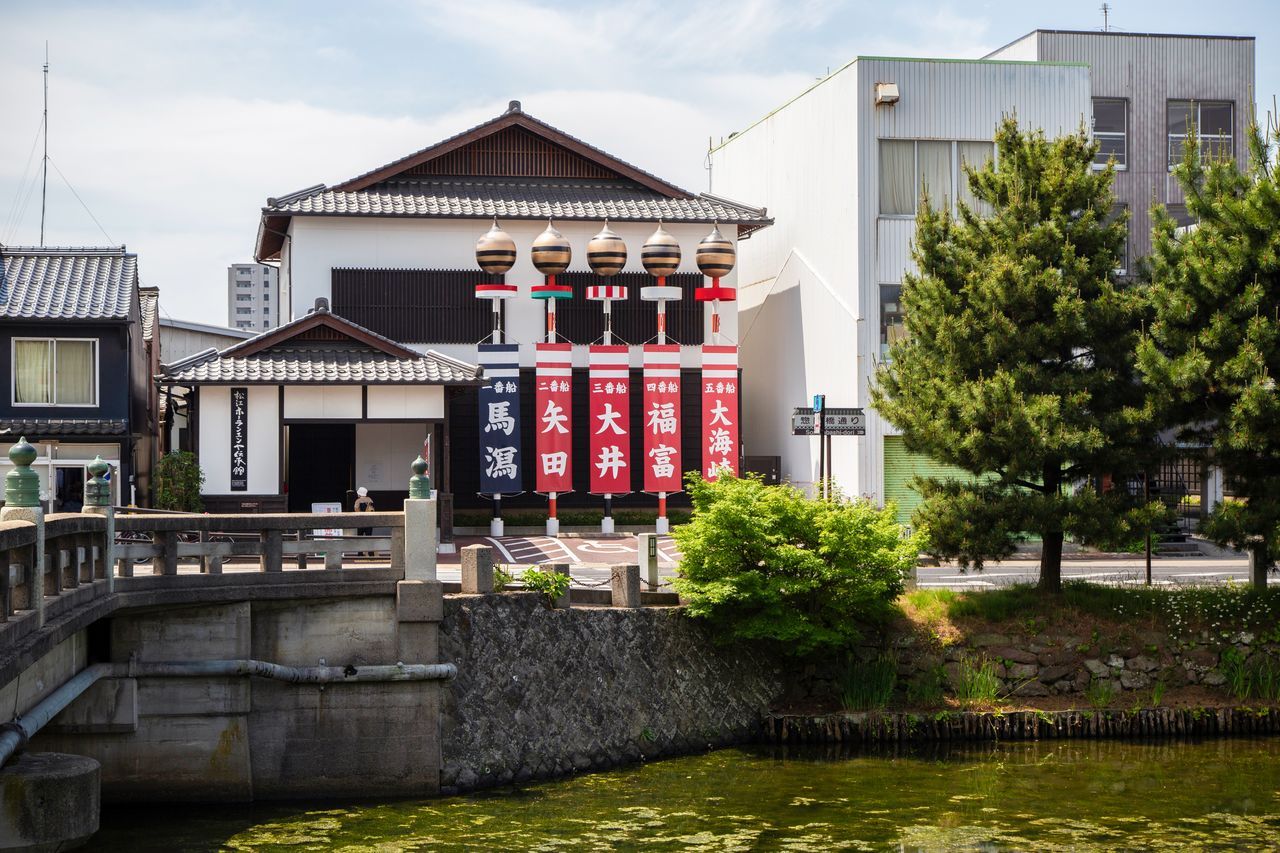 The Hōran En’ya Memorial Hall, near the Hori River, is marked by banners of the Five Lands to welcome visitors.

Once inside, visitors enter a large-screen theater showing festival footage to give the impression of actually being there. The exhibit room has life-size mannequins dressed in the costumes of the Five Lands striking suitable poses, all against backdrops of enlarged photographs of the kaidenmasen. Overhead monitors screen videos of the dances of the kengai and zaifuri. Having all of the Five Lands represented in one room brings out the uniqueness of each. 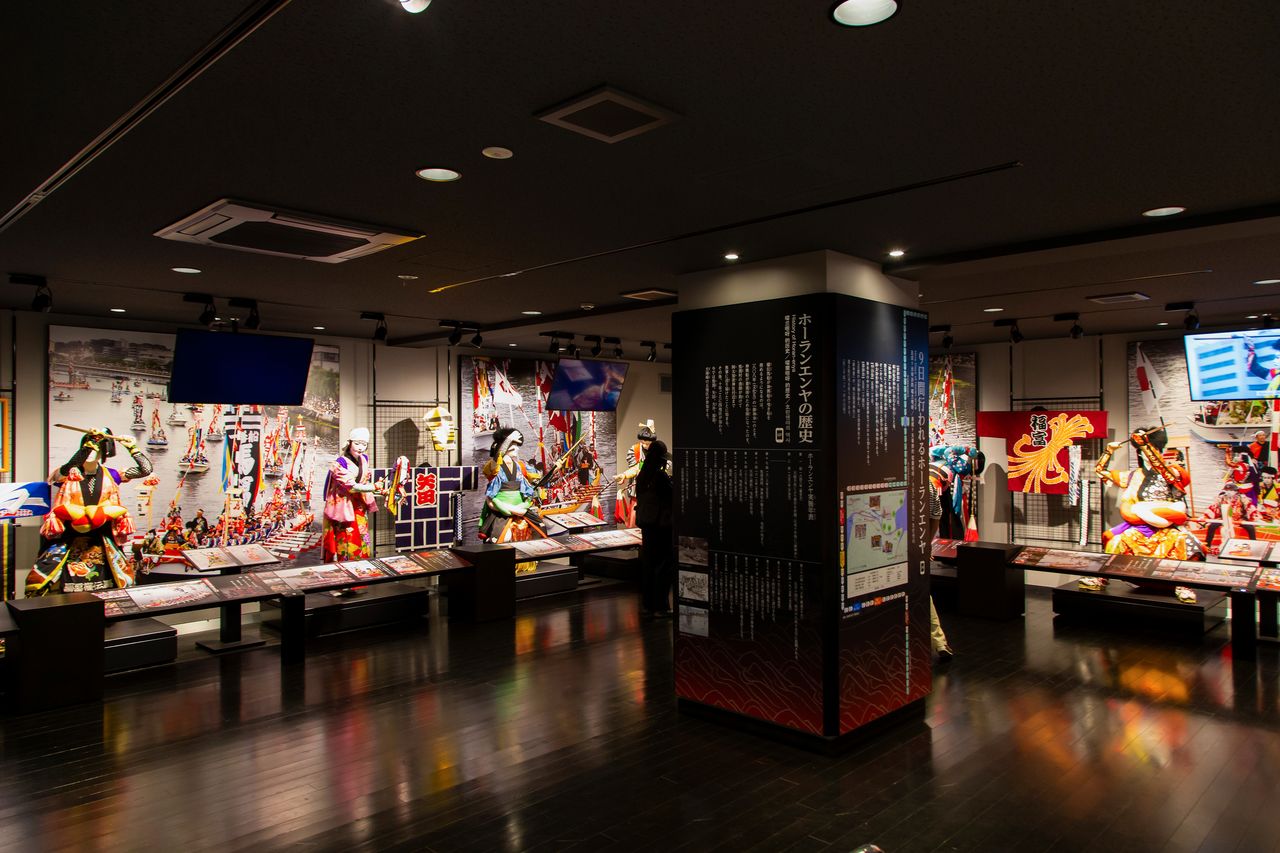 The exhibit room has life-size mannequins of the kengai and zaifuri of the Five Lands. 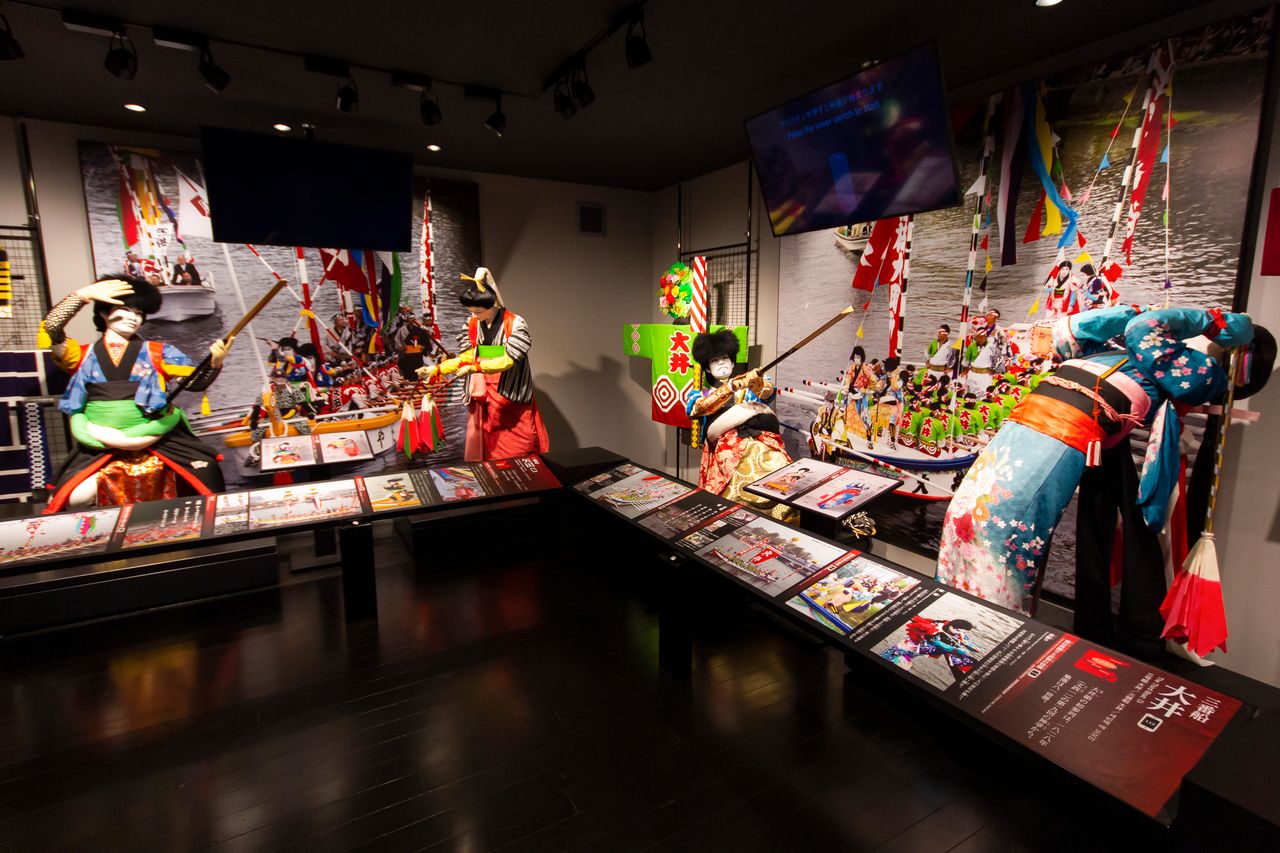 Visitors can study the bright costumes and dramatic poses at their leisure.

Also in the exhibit room are models of the kaidenmasen, rare documentation, and panels depicting the timeline and history of the festival. The museum’s other areas offer historical photo displays and opportunities for visitors to try on various costumes. A definite must-see is the kaidenmasen in the central yard, which, while only about half the size of the real thing, nonetheless gives visitors the change to experience being a kengai or zaifuri on deck. 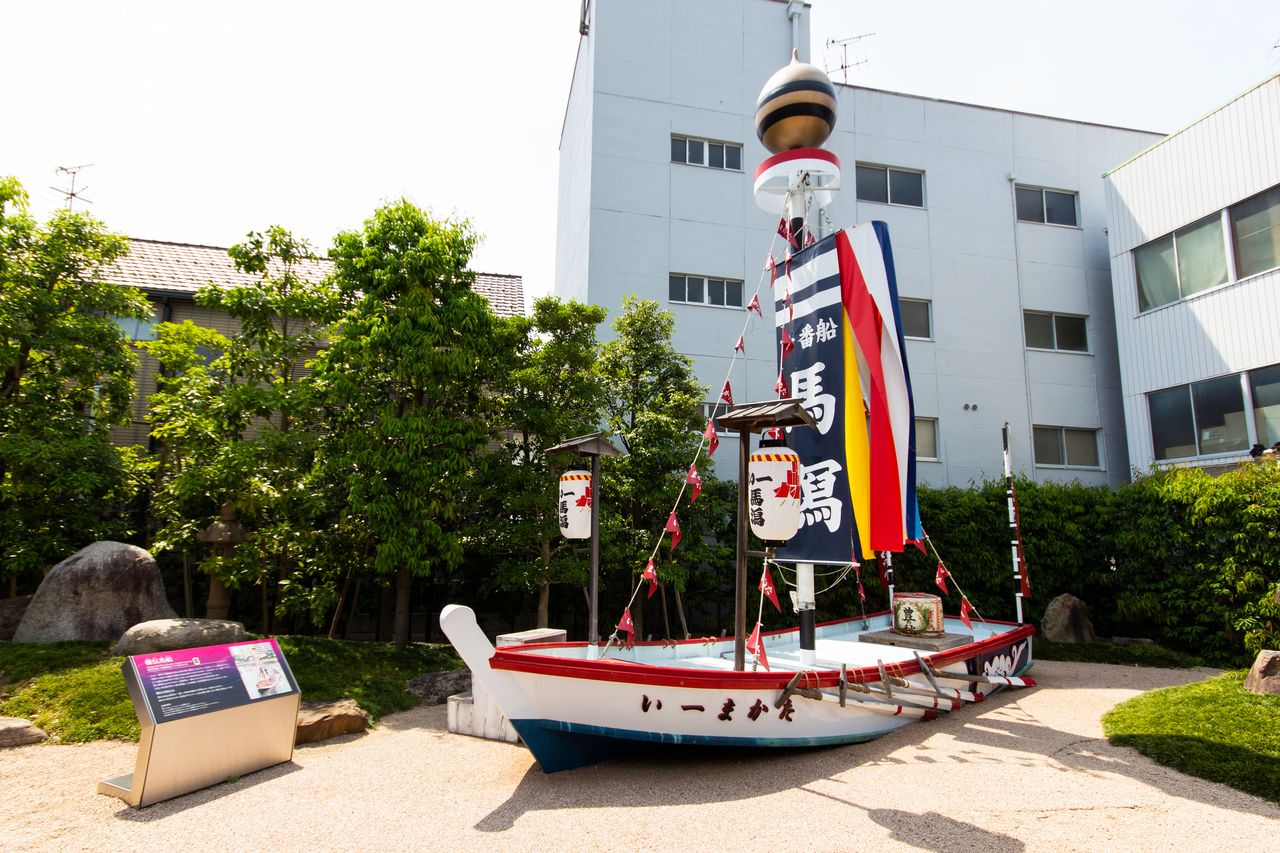 Visitors are welcome to climb aboard the replica kaidenmasen in the central yard.

A Boost to Regional Vitality

The festival reaches its climax on the afternoon of the Kangyosai, when the fleet passes the Kunibiki Bridge over the Ōhashi River. Three more long bridges span the river from this point to the river’s mouth where it meets Lake Shinji: the New Matsue Bridge, the Matsue Bridge, and the Lake Shinji Bridge. As each boat makes two complete circuits under each bridge before proceeding, they pass near the banks and the bridges alike, giving many of the spectators a close look at the Kaidenma-odori dances.

By 3:00 in the afternoon, the shrine boat, towed by the Makata kaidenmasen, reaches the Kitazume jetty of the Matsue Bridge, after which a land procession carrying the sacred cargo makes for Jōzan Inari Shrine.

In the town, where the festival has ended, people express their wishes to meet again a decade later in good health. The Hōran En’ya, happening only once a decade, gives people the vitality to live for the next 10 years. 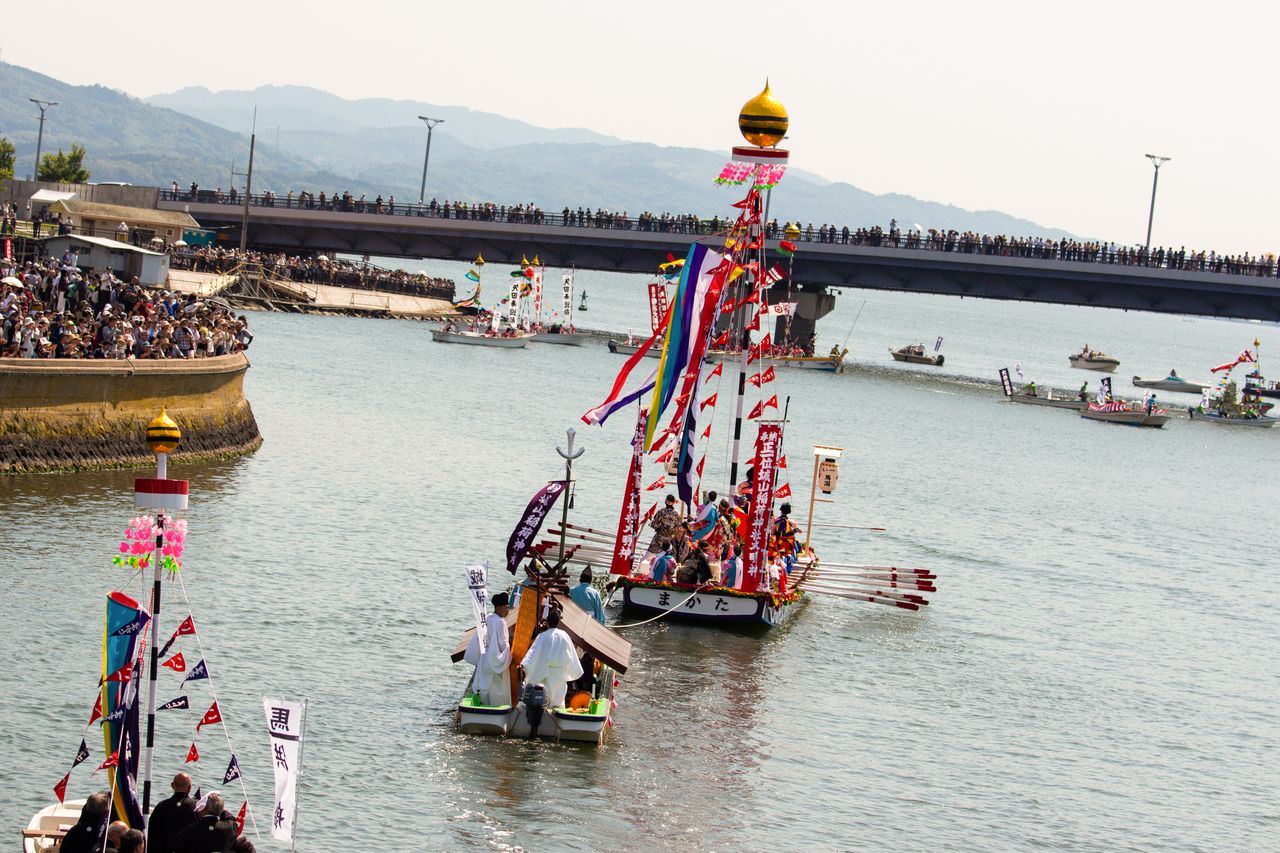 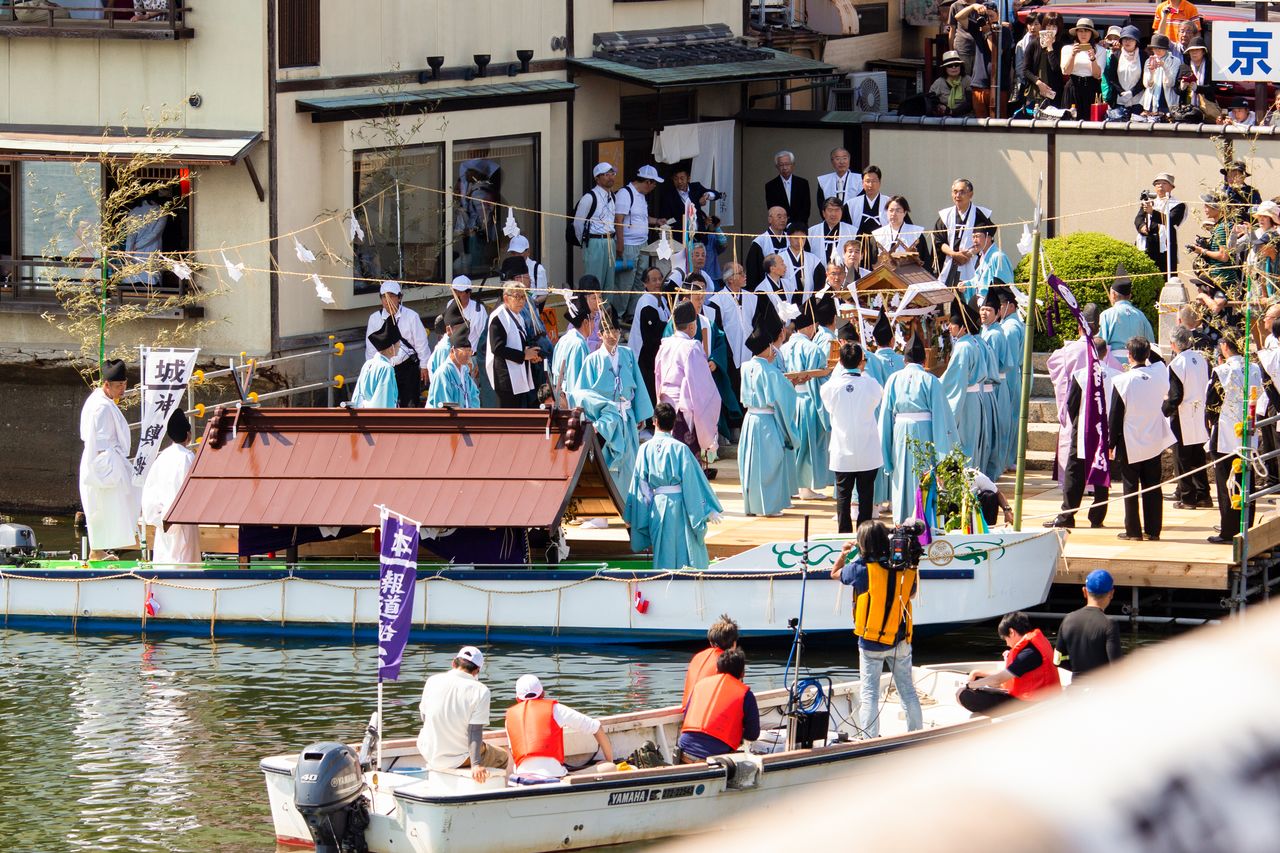 The casket of the spirits is transferred from the boat to the land at the Kitazume jetty of the Matsue Bridge. 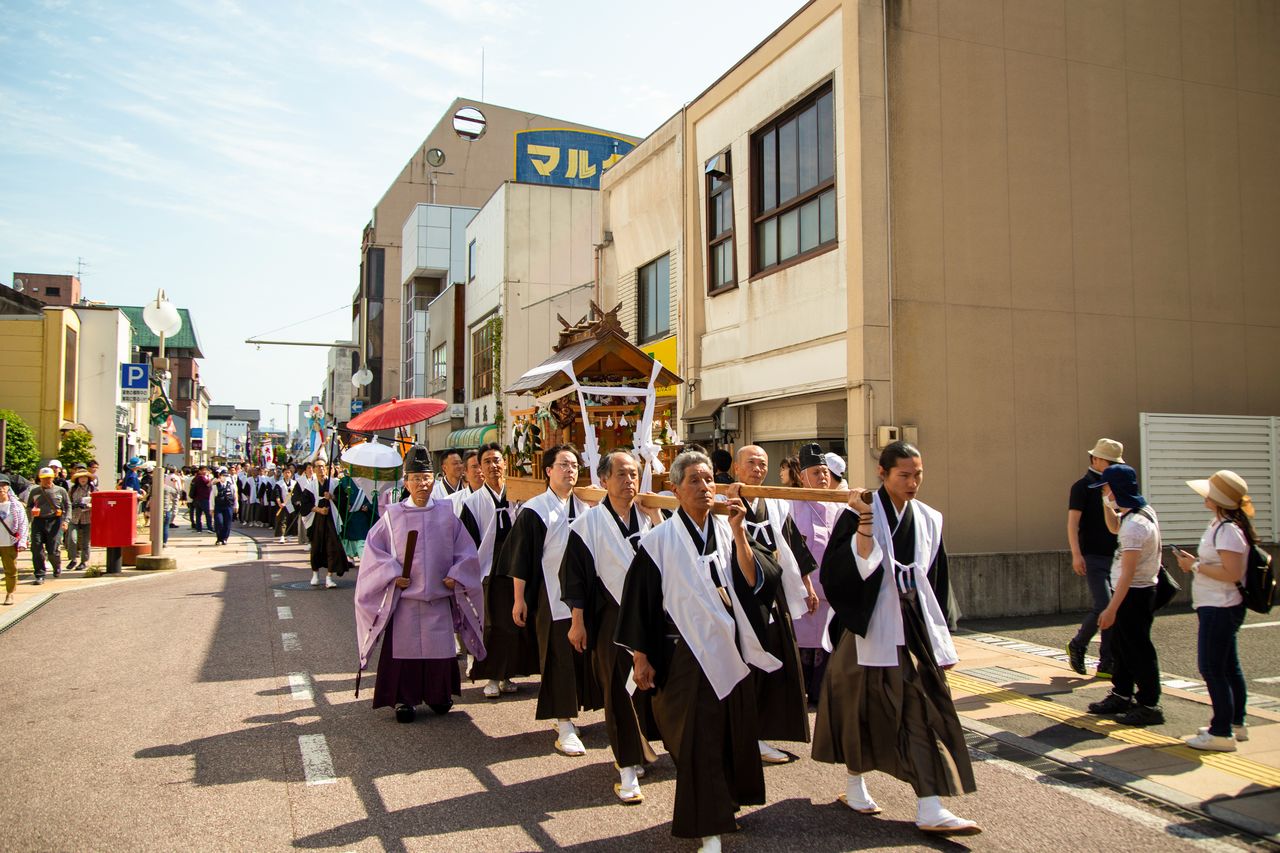 The casket of spirits is carried through the castle town of Matsue. 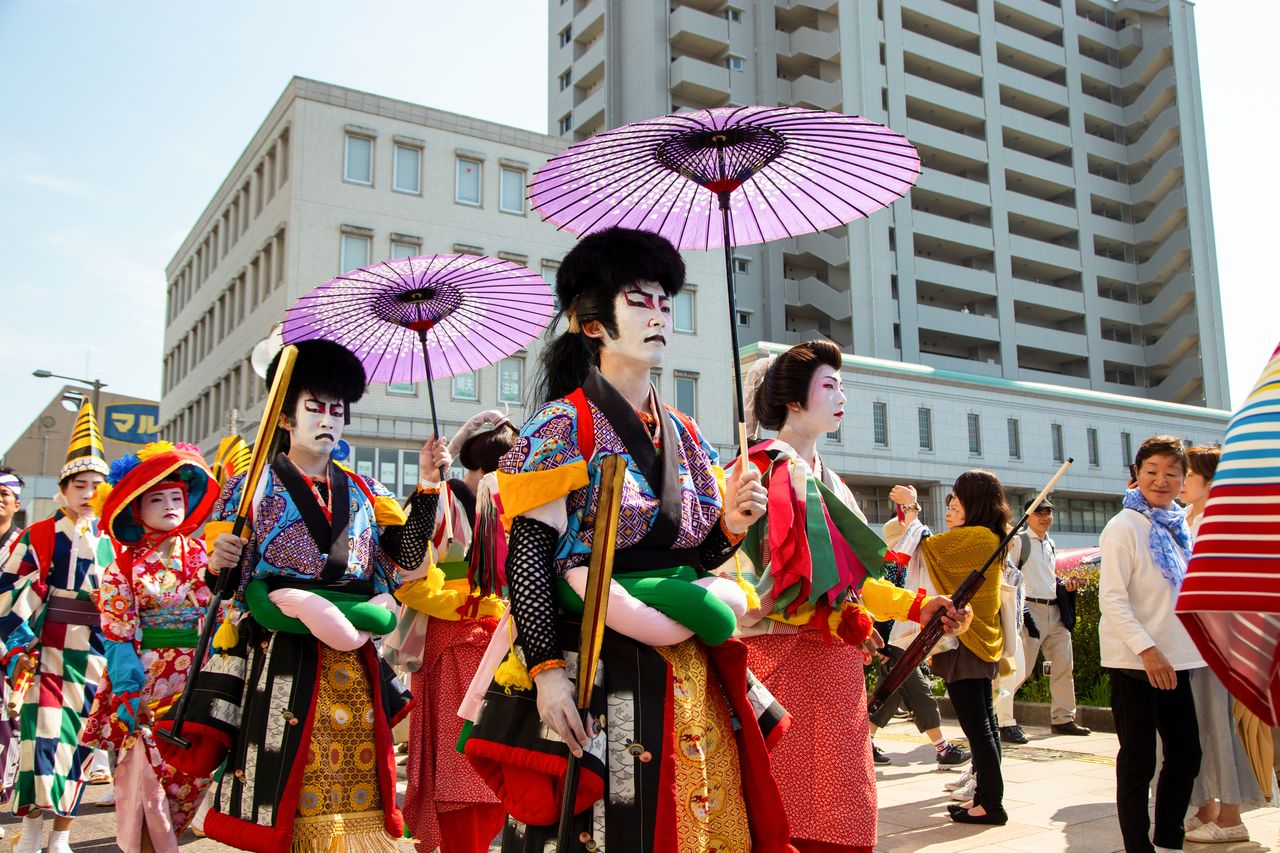 The Five Lands representatives show signs of fatigue as they join the land procession, but at Jōzan Inari Shrine, they regroup and perform their final devotional Kaidenma-odori dance.

(Originally published in Japanese. Reporting, text, and photos by Nippon.com. Banner photo: The gallant dance of the Yada kengai receives ovations from spectators.)