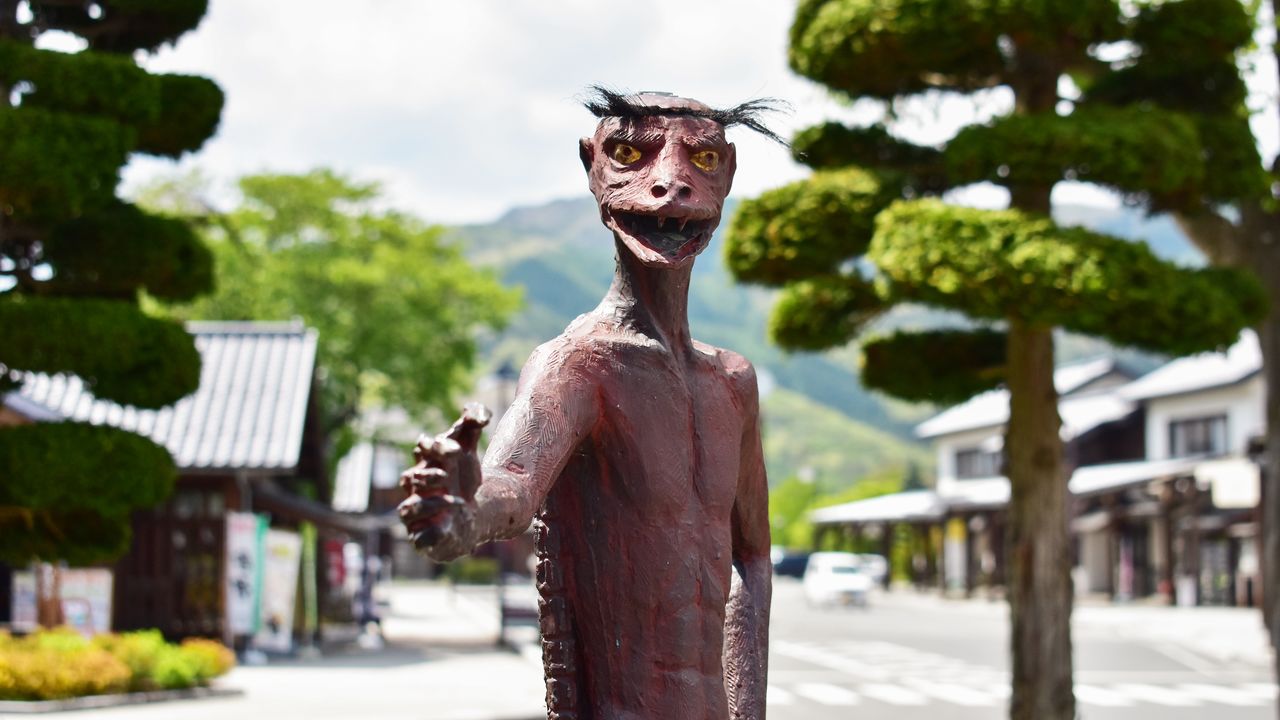 Traveling in Tōno, Iwate: A Birthplace of Japanese Legends

Travel Jul 2, 2019
Thanks to a celebrated book by the folklorist Yanagita Kunio, the city of Tōno in Iwate Prefecture is popularly associated with a number of beloved Japanese folktales.

Surrounded by rugged mountain peaks in all directions, the city of Tōno is situated in the lush natural environs of the largest hollow in the Kitakami uplands of central Iwate Prefecture. One consequence of its geographic isolation has been a preservation of traditional Japanese customs and creeds. These circumstances have led to the place being described as “Japan’s own hometown” and “the archetype of how Japanese see themselves.”

Many folktales and legends have been handed down in the region. Tōno monogatari (Tales of Tōno), a collection of these stories published in 1910 by Yanagita Kunio, established the foundations of Japanese folklore studies. It is further said that entities depicted in the folklorist’s volume, such as kappa (water goblins living mainly in rivers) and zashiki-warashi (childlike house fairies), have been a basis of the depictions of Japanese yōkai (supernatural beings) in novels, manga, and anime ever since. These factors combine to make Tōno into a thriving tourist destination, a land of folklore where visitors can to this day explore these old tales. 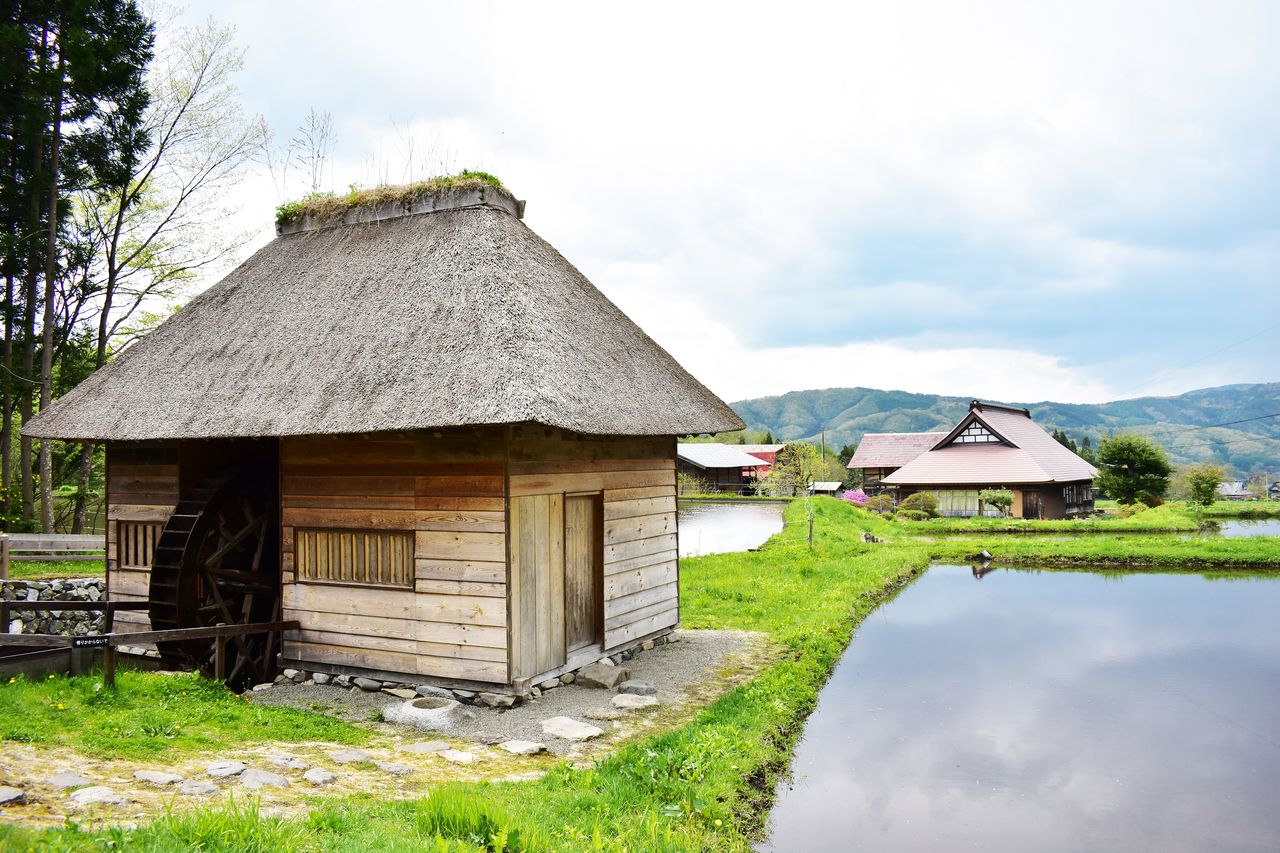 The Yamaguchi waterwheel, one of the distinctive sights of Tōno, was once actually used for threshing and milling of grain. 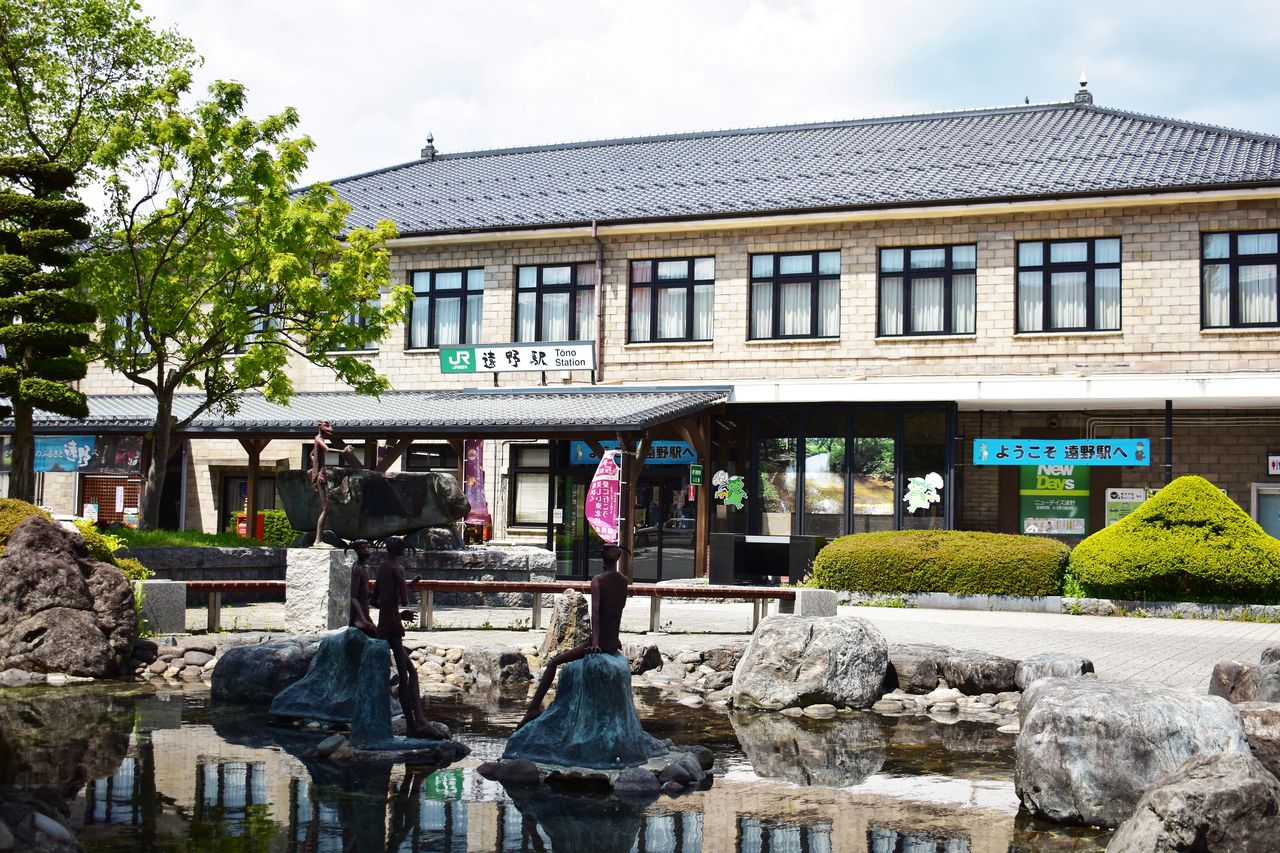 Outside JR Tōno Station is the Kappa Pond, with four kappa statues positioned to welcome visitors.

It is recommended that visitors begin their excursions by expanding their imaginations about the realms of Japanese folktales at the Tōno Folktale Museum. This place, which is geared to sensory enjoyment of such stories, is located just a short walk from JR Tōno Station. Anecdotes handed down in the Tōno area from times of yore, such as those about the zashiki-warashi imps that haunt homes and the yuki-onna, female-shaped snow specters in white kimono, are depicted in paper cutouts, illustrations, and videos in the Mukashi-banashi-gura, or “storehouse of old tales,” a structure repurposed from the storehouse of a sake brewery.

Inside the museum proper, visitors will be startled in one moment by the fluttering of the wings of tengu (winged, long-nosed mountain spirits), whose shadows pass before one’s eyes, and in the next moment by the sounds of childish laughter from behind. The latter is characteristic of the zashiki-warashi, a child-spirit who takes up residence in households and comes out late at night to play pranks. It is said that zashiki-warashi are not visible to grown-ups, and moreover, houses where they make their presence felt receive good luck, while houses where they are absent fall to ruin. This makes it a peculiarly lovable character, in that people actually want to have it around. 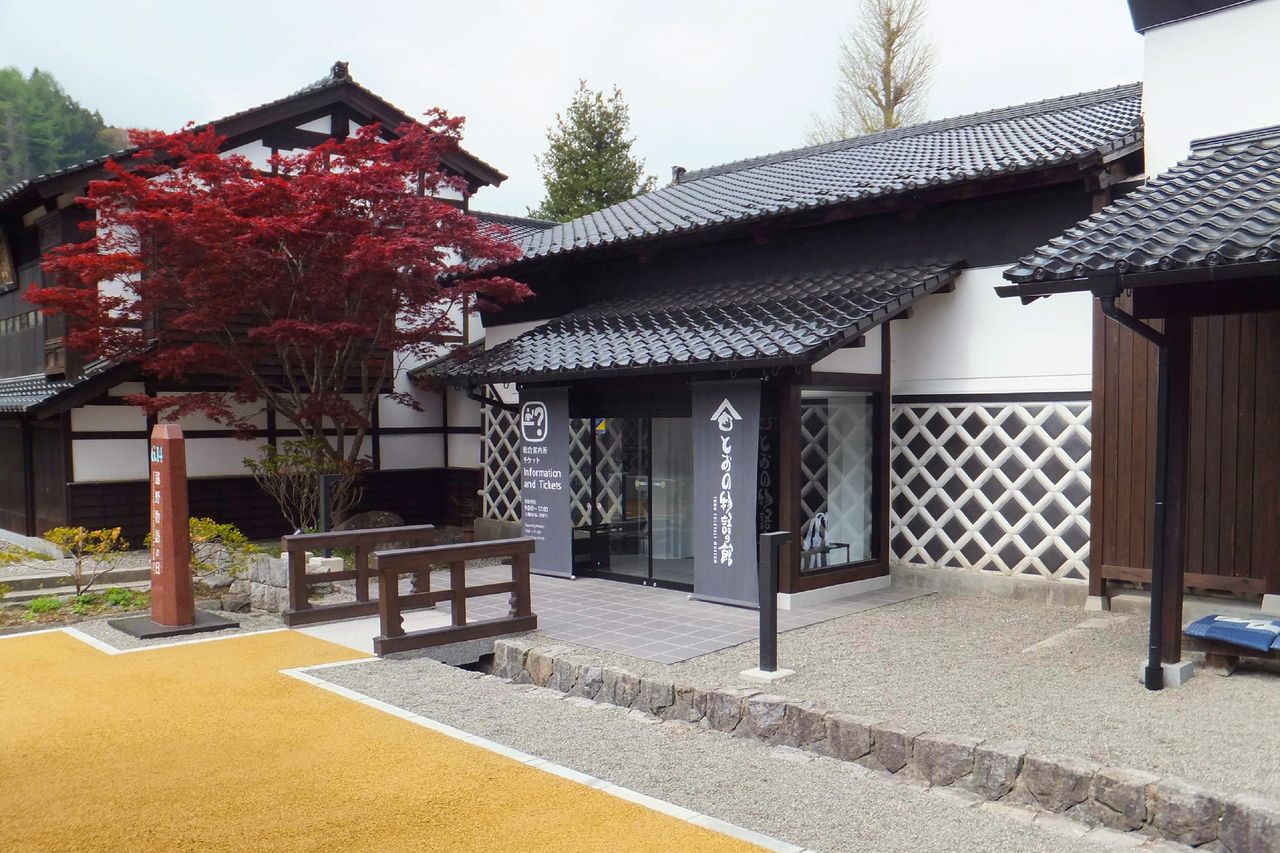 The Mukashi-banashi-gura is a repurposed sake storehouse. (Courtesy of the Tōno Folktale Museum)

Another former storehouse now houses the Tōno-za theater, where storytellers relate Japanese folktales, speaking in regional dialects with unique intonations and a variety of expressions. Ranging from comforting to scary, they draw listeners inexorably into the world of a given story. On Saturdays during July and August, Tōno-za presents free shows of yokagura (evening performances of sacred Shintō music and dance) beginning at 8:00 pm, allowing the public to enjoy these dances that have long been handed down in the city. 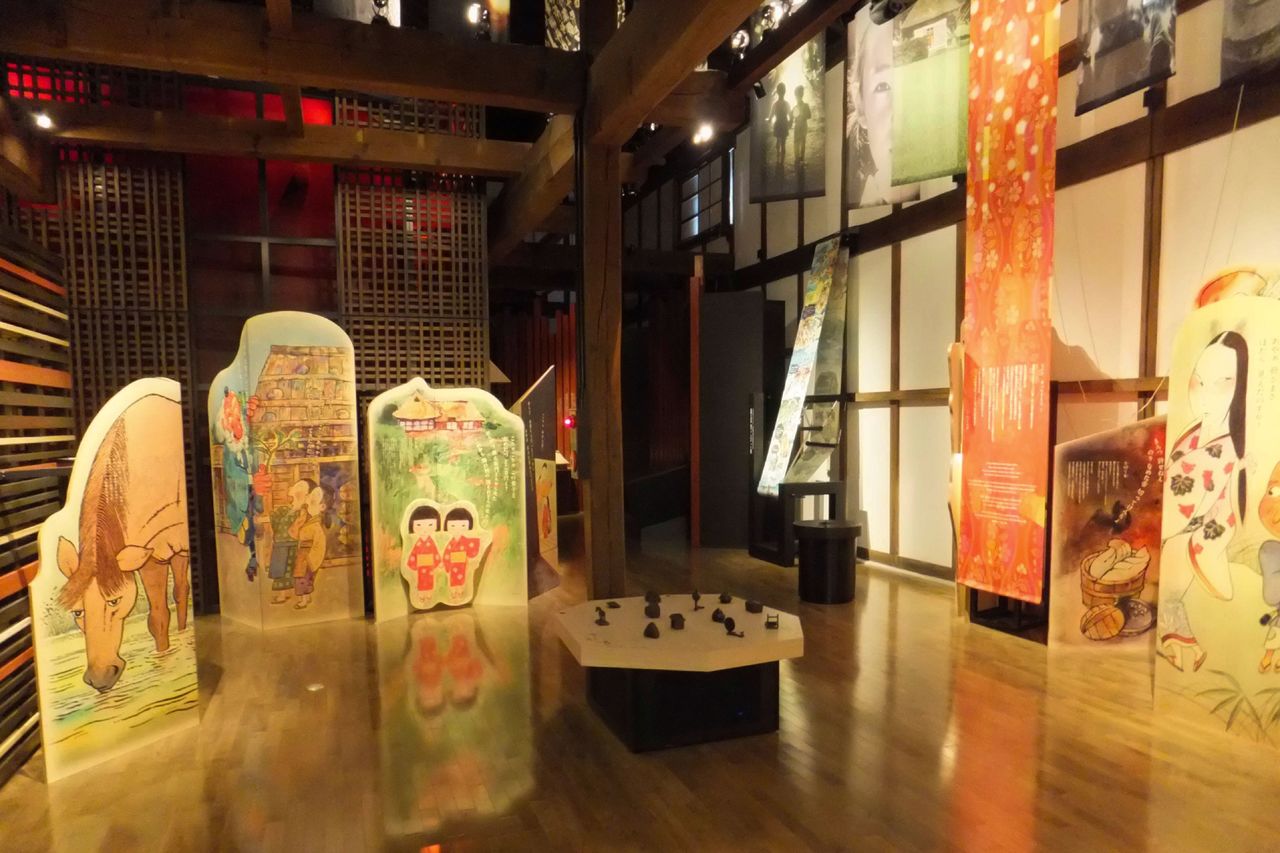 At the Mukashi-banashi-gura, visitors are treated to audio and video presentations of Japanese folktales. (Courtesy of the Tōno Folktale Museum) 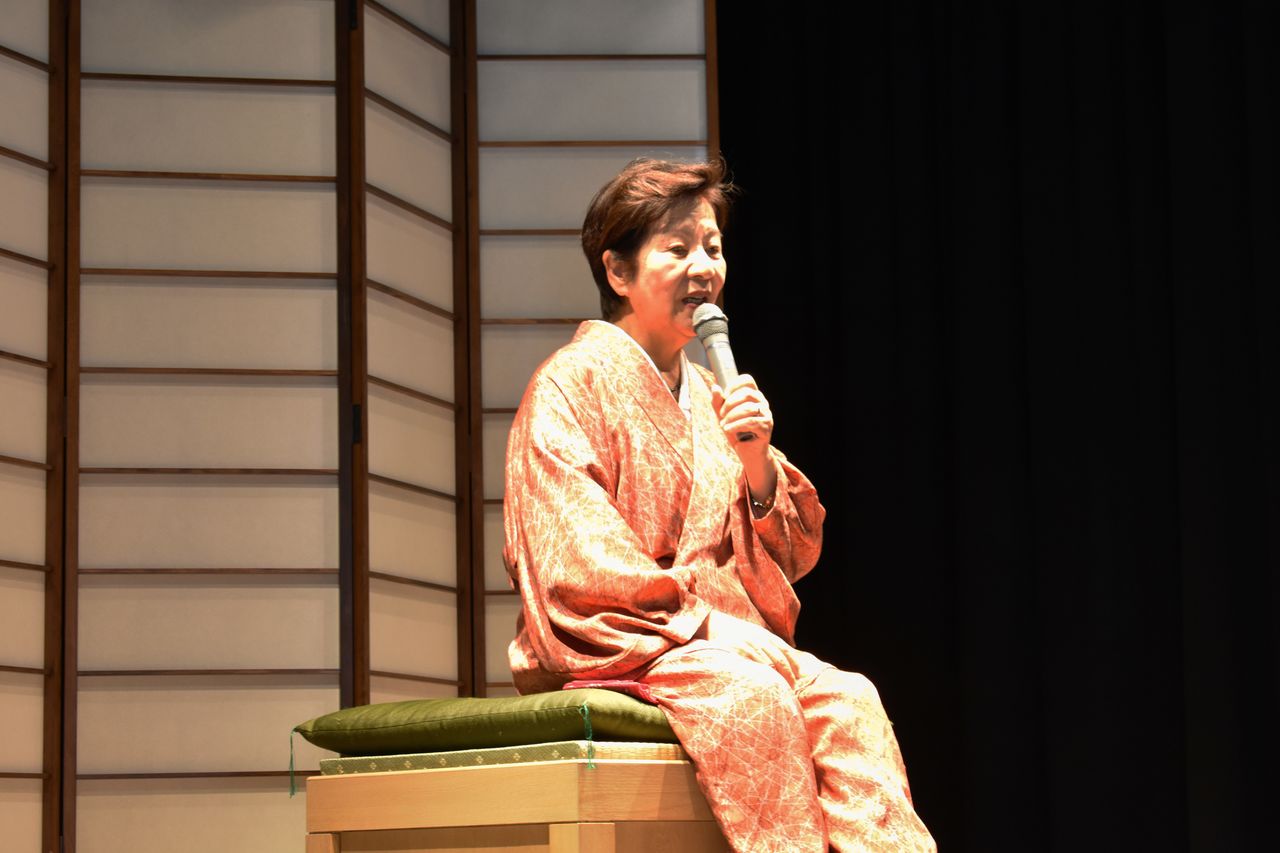 The Tōno-za features recitations of Japanese folktales in various dialects.

Another structure on the grounds is the Yanagita Kunio pavilion, based on a relocation of both Kōzen Ryokan, the inn where Yanagita stayed while writing Tōno monogatari, and the residence in Setagaya, Tokyo, where he spent the last years of his life. Personal belongings used by the author during his lifetime, and the elegant study in the latter house, are just a few of the features on public display here. A theater shows an easy to understand video describing the life and accomplishments of a man who has been called “the father of Japanese folklore studies.” 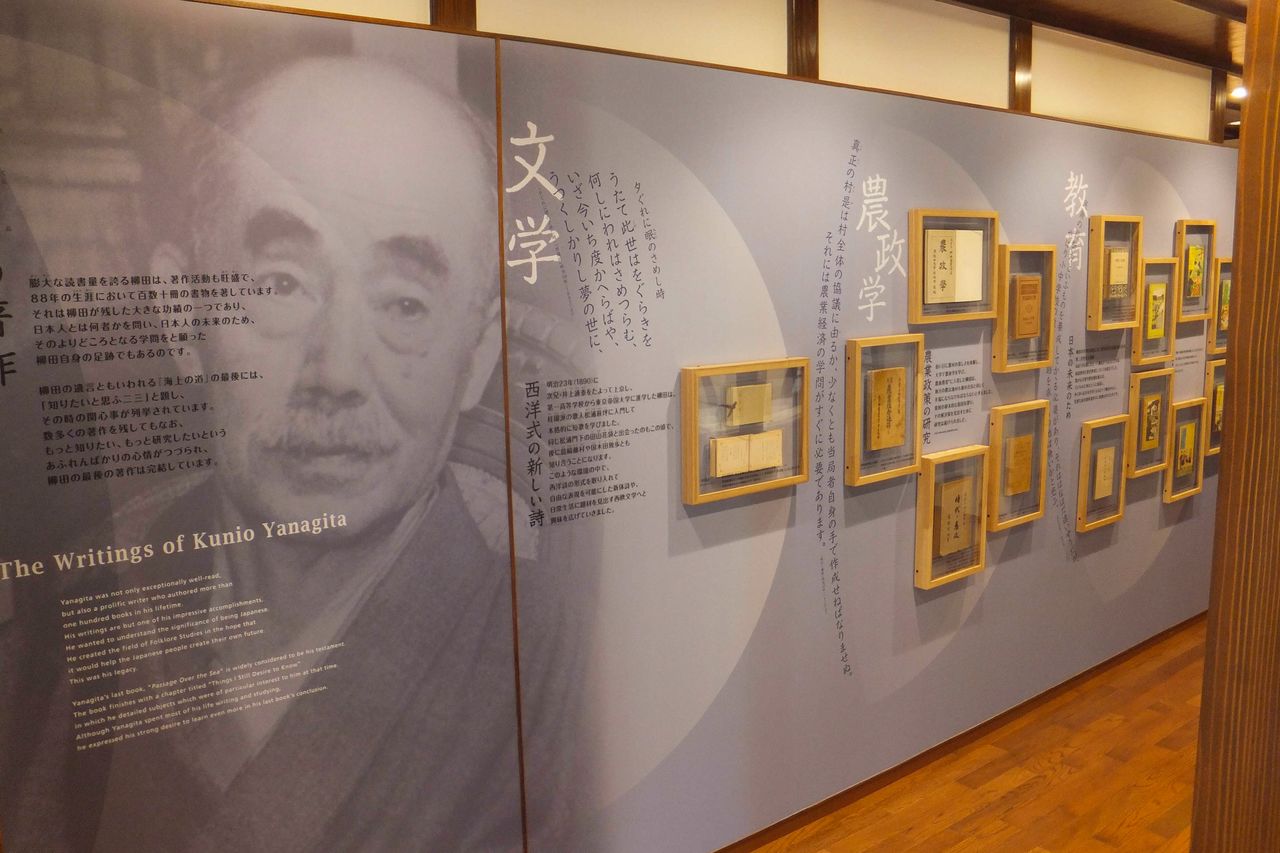 An exhibit at the Yanagita Kunio pavilion. (Courtesy of the Tōno Folktale Museum)

One of the more universal of Japanese supernatural entities is the kappa, which lives in or near water. There are various ideas about these creatures, even about their very appearance, owing to the fact that tales about them abound all over Japan. Most such stories, however, describe the kappa as having green or blue skin, a water-filled plate at the top of the head, a shell on the back like that of a turtle, and webbed hands. It is also said that the kappa will become enervated and die should its head-topping plate be dried out or broken, and that it is mischievous but not malicious by nature. The name kappamaki for cucumber sushi is said to derive from the notion that cucumber is a favorite food of the kappa. 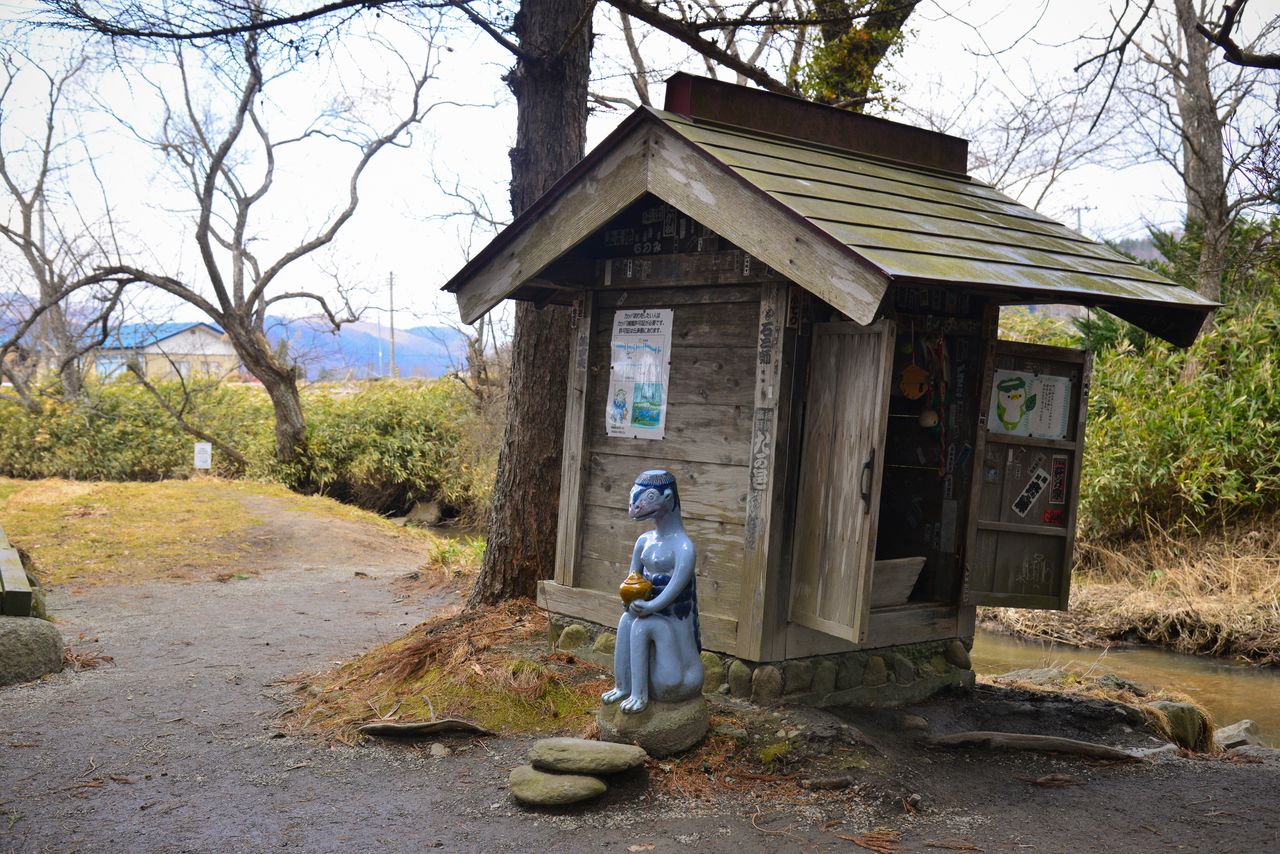 A small structure on the Jōken Temple grounds near Kappa-buchi Pool. Fishing for kappa is best done using cucumber as bait.

Jōken Temple stands a short drive from Tōno Station, and to the rear of the temple proper is Kappa-buchi Pool, where it is said that the = beasts once lived. The stream is surrounded by luxuriant greenery, creating surroundings where even now a mischievous kappa might appear. A common notion is that the kappa of Tōno have red skin. Keep this in mind as you seek them out.

Fishing for kappa with cucumber as bait is a popular pastime around these parts. A kappa hunting license (¥210 including tax) is necessary to take part in this activity. These are available for purchase at the visitor center or the roadside service area. Be sure to familiarize yourself with the seven rules for hunting kappa, which are printed on the back of the license, and bear in mind that there are no reports to-date of anyone actually catching a kappa. 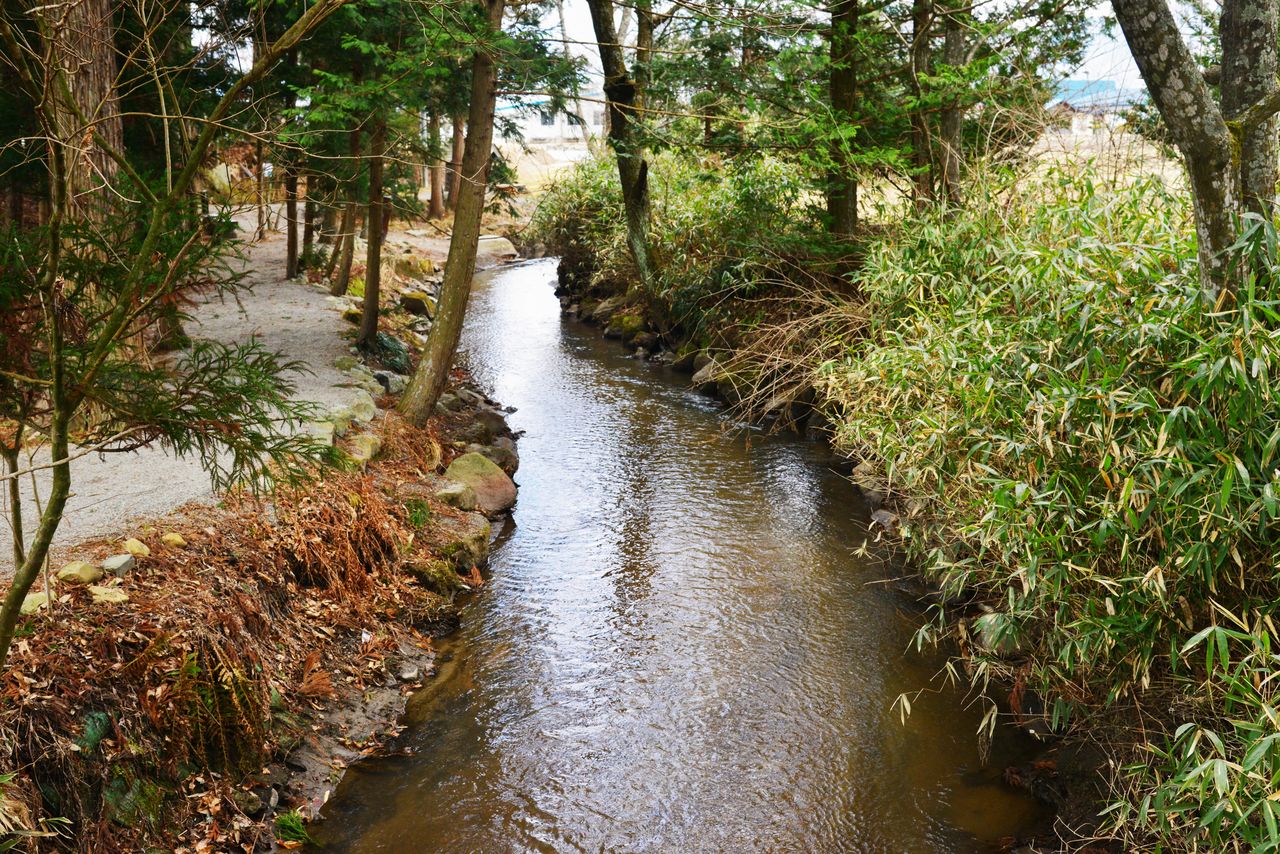 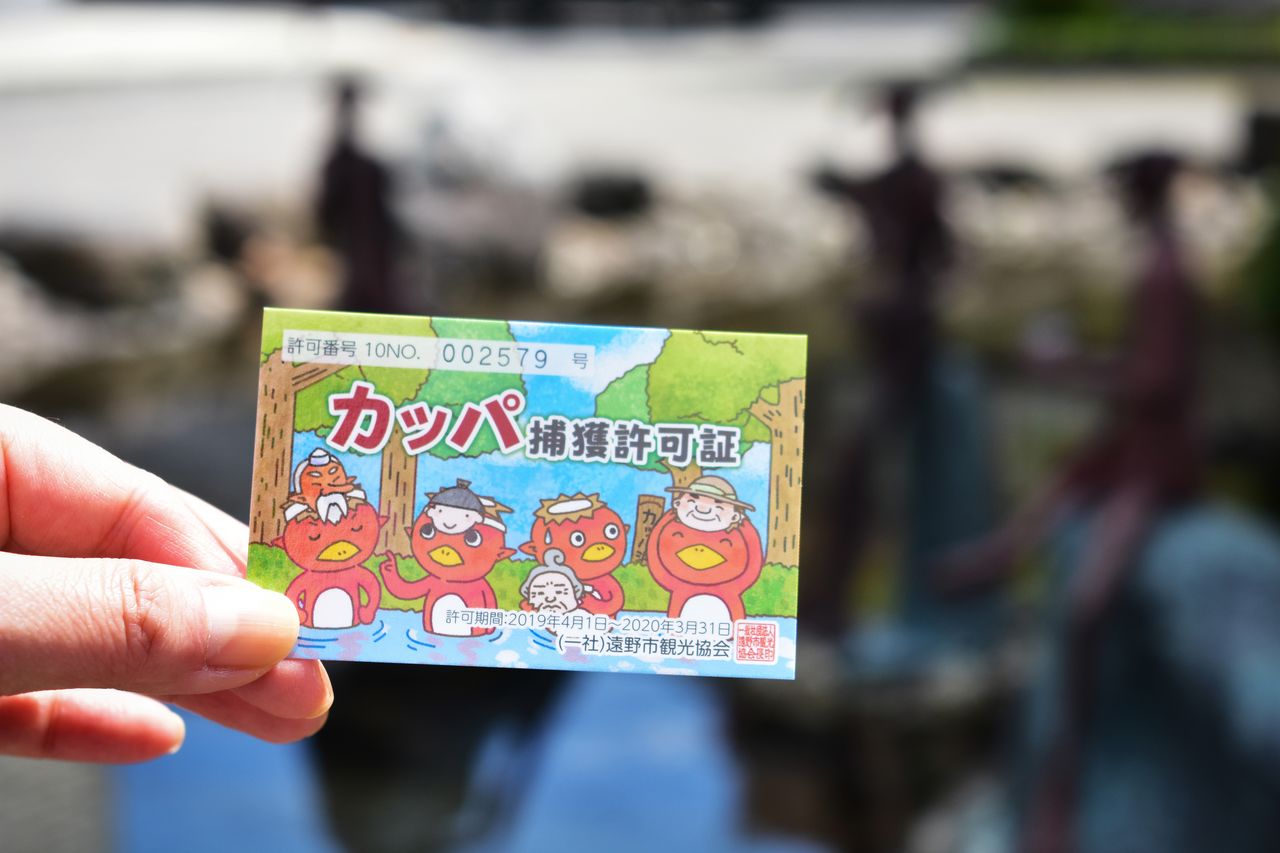 A kappa hunting license, with the seven rules for hunting written on the back, is required if one is going fishing for Kappa.

There are other kappa-related features at Jōken Temple itself as well. The koma-inu stone watchdogs that stand guard at the entrance to the temple grounds have plate-shaped depressions on the tops of their heads to catch water. It is said that these koma-inu were installed here after a fire at the temple, because a kappa helped put the fire out by spraying water from the plate on its head. Jōken Temple is thus known locally for being the temple with the kappa koma-inu. And tucked away in a corner of the temple is a shrine to a deity of nursing mothers; it is said that offering prayers here will aid them in nursing their children well. 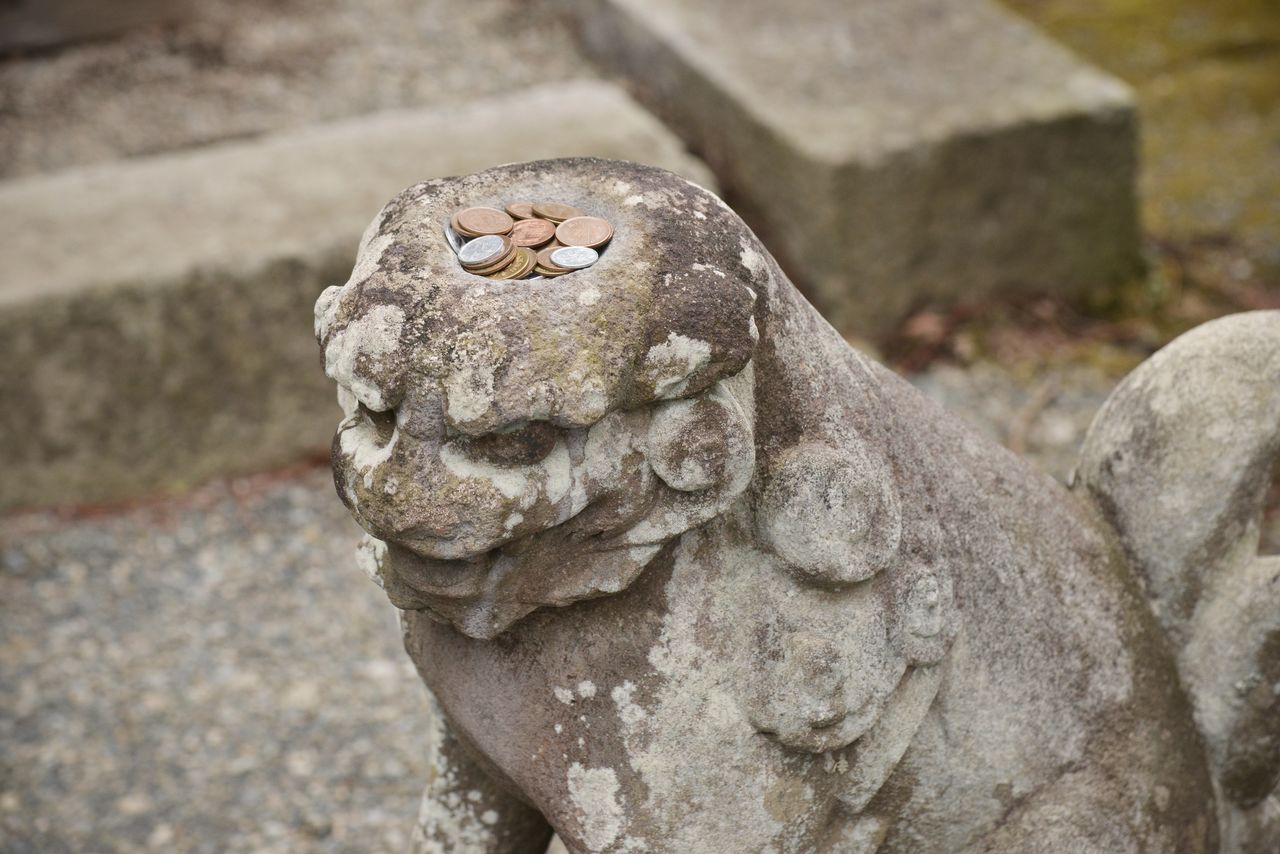 A kappa koma-inu stands to the side as you pass through the temple gate into the grounds. 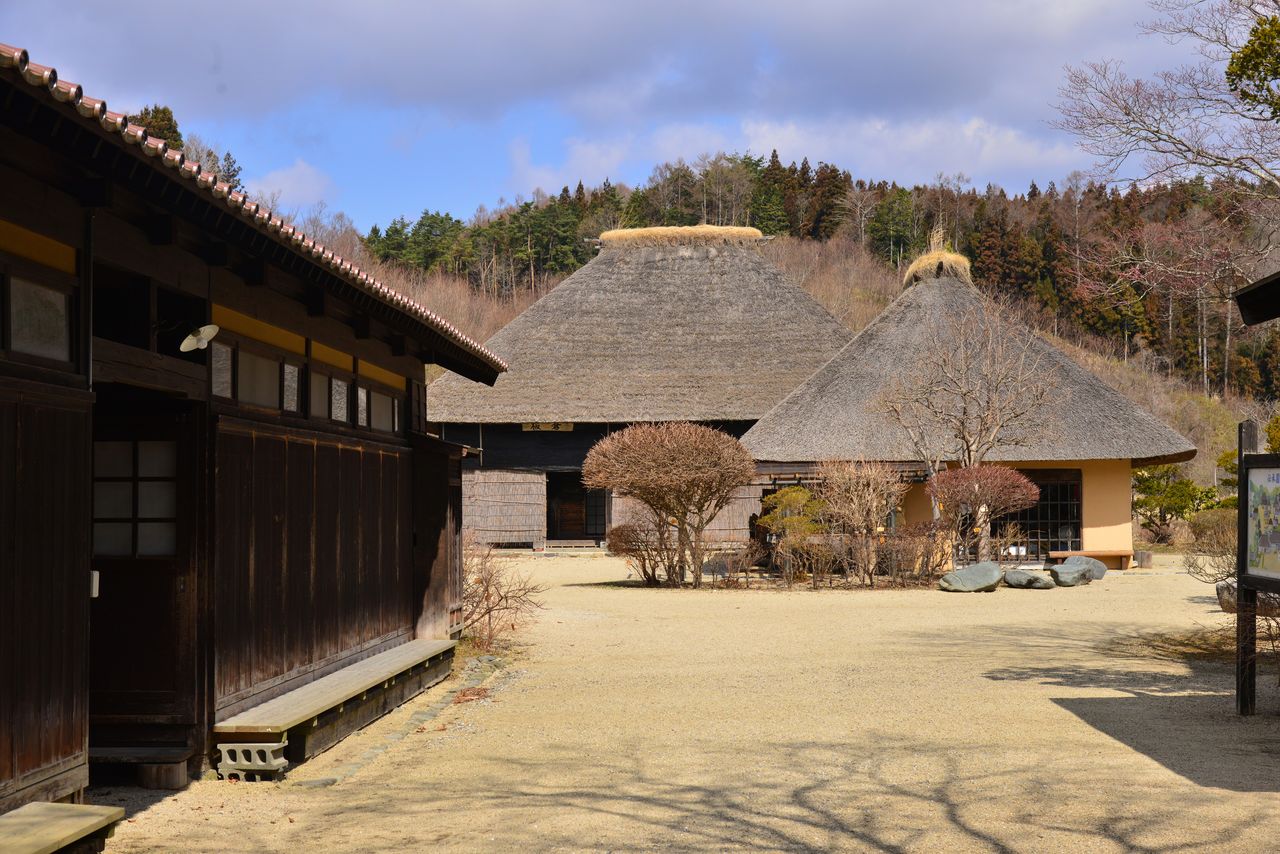 This bucolic atmosphere gives a sense of the way things used to be in Japan.

Denshōen Park re-creates the way farmers in the Tōno region lived in earlier eras. The one-time residence of the Kikuchi clan, which dates back to the 1750s and is a designated national important cultural asset, offers the opportunity for the public to observe the interior of a Nanbu-magari-ya. This structure is a type of home unique to the Nanbu clan, who controlled a region stretching from the eastern part of Aomori Prefecture into Iwate Prefecture. It combines a main house and an L-shaped stable, a construction adopted because horses were considered to be part of the family among this clan, and were thus treated accordingly. 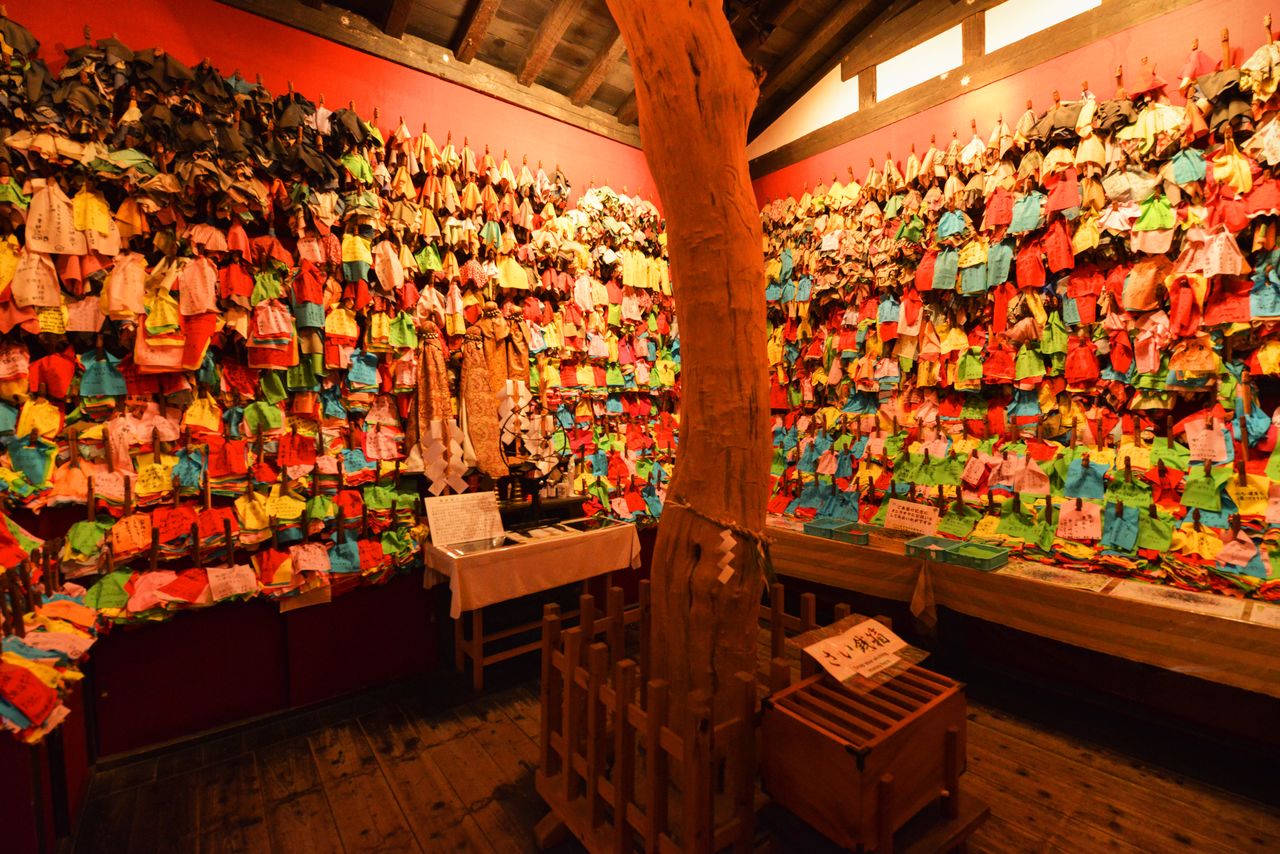 The Oshira-dō, a shrine connected by a corridor to the Kikuchi House, is a place that makes many visitors feel the presence of something ineffable. A goshinboku (sacred tree) stands in the center of the dimly lit space, and some 1,000 oshirasama, or household deities, are enshrined on all the walls.

The word oshirasama refers to household deities revered in the Tōhoku region as spirits of horses, silkworms, or agriculture. “Oshirasama densetsu” (The Legend of Oshirasama), included in Tōno monogatari, relates the tragic tale of a love between a farmer’s daughter and a horse. According to this telling, a farmer killed the family horse by hanging it from a mulberry tree, in a rage at his daughter’s love for the animal. The daughter pleaded and cried, then flung herself about the dead horse’s neck, whereupon they rose together into the heavens, the girl astride the horse’s back, thereby becoming oshirasama. The farmer, left behind, heard his daughter speak to him in a dream, and following her instructions, fed mulberry leaves to a silkworm. The resulting cocoon provided silk threads, leading to Tōno’s establishment as a prosperous center of sericulture, or so it is said. It seems only natural that such a story would have arisen in such a region, where the people coexisted with their horses under a single roof, as in the Nanbu-magari-ya structures.

The oshirasama objects combine the entities into one: faces of a girl and a horse are carved into a piece of mulberry wood about 30 centimeters in length, which is then wrapped with a small kimono, and finally covered with a cloth on which a prayer has been written. Visitors to Denshōen Park have the rare privilege of putting their own prayer cloths on an oshirasama as well. 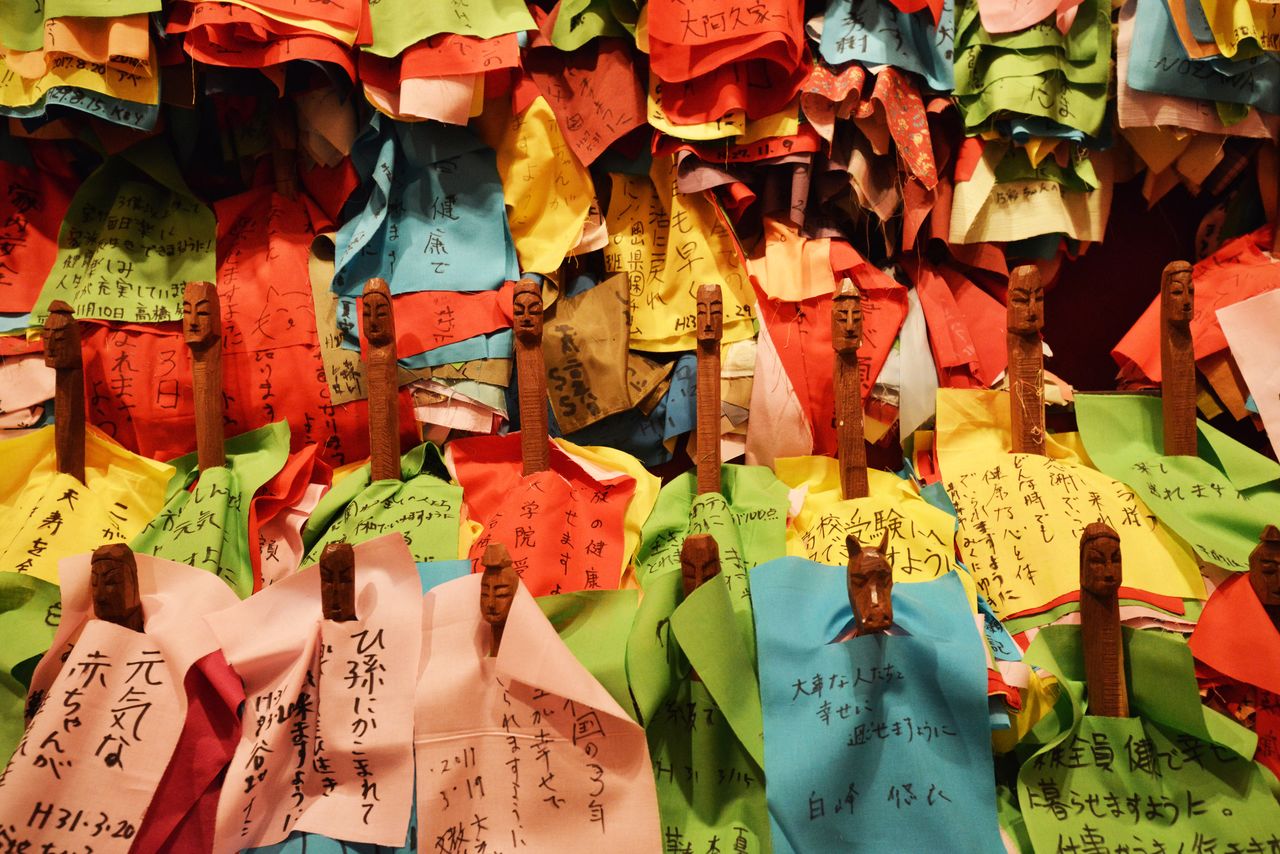 Wood-carved figurines are covered with prayers written on cloth.

Tōno Furusato Village, located 25 minutes by bus from JR Tōno Station, is the very picture of an old-fashioned Japanese mountain village. Magari-ya houses with thatched roofs are scattered here and there among the farming village landscape. The site is frequently used for location shooting in period films and TV serials. White horses are kept in the Kimoiri-no-ie building in the village, where zashiki-warashi are rumored to reside as well. A zashiki-warashi costume contest takes place here between early July and late August, and admission is free to visitors who show up appearing like zashiki-warashi. 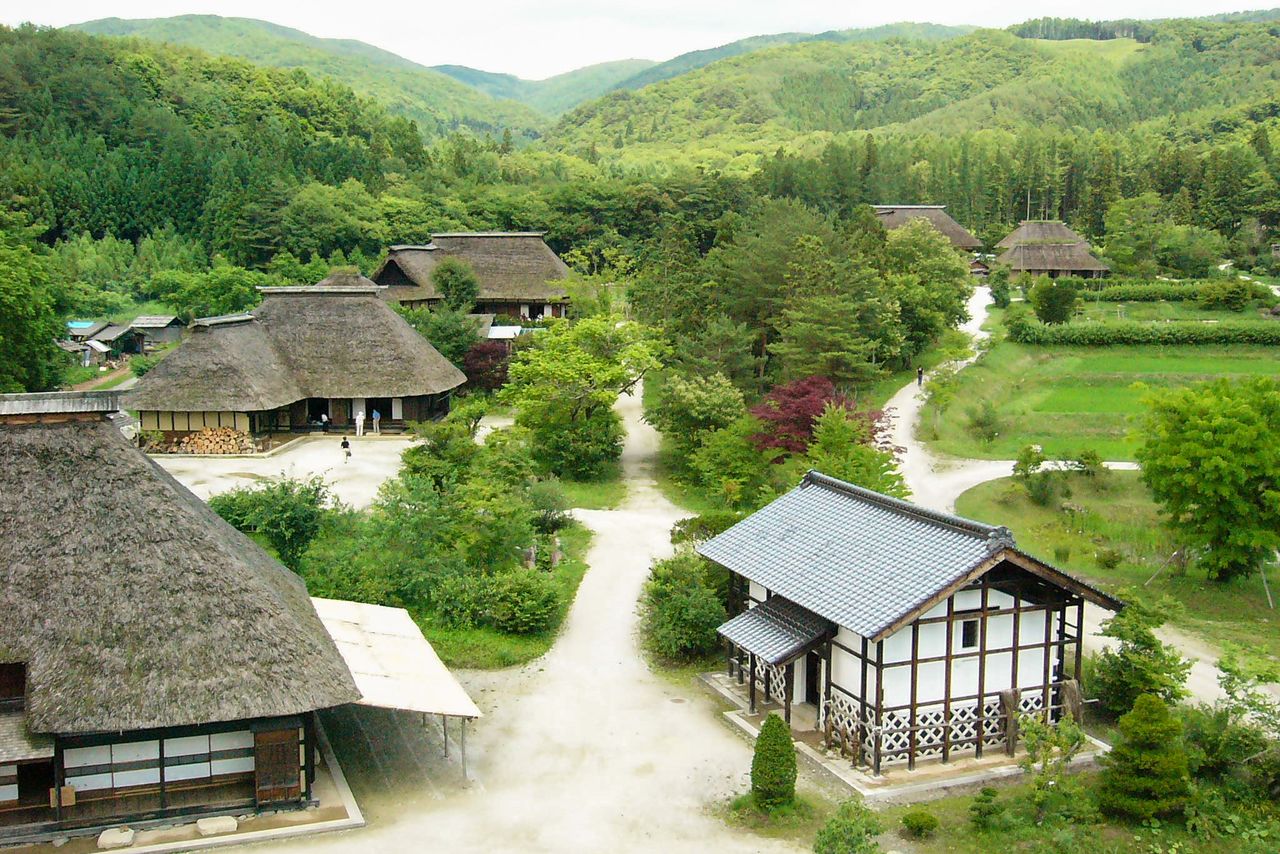