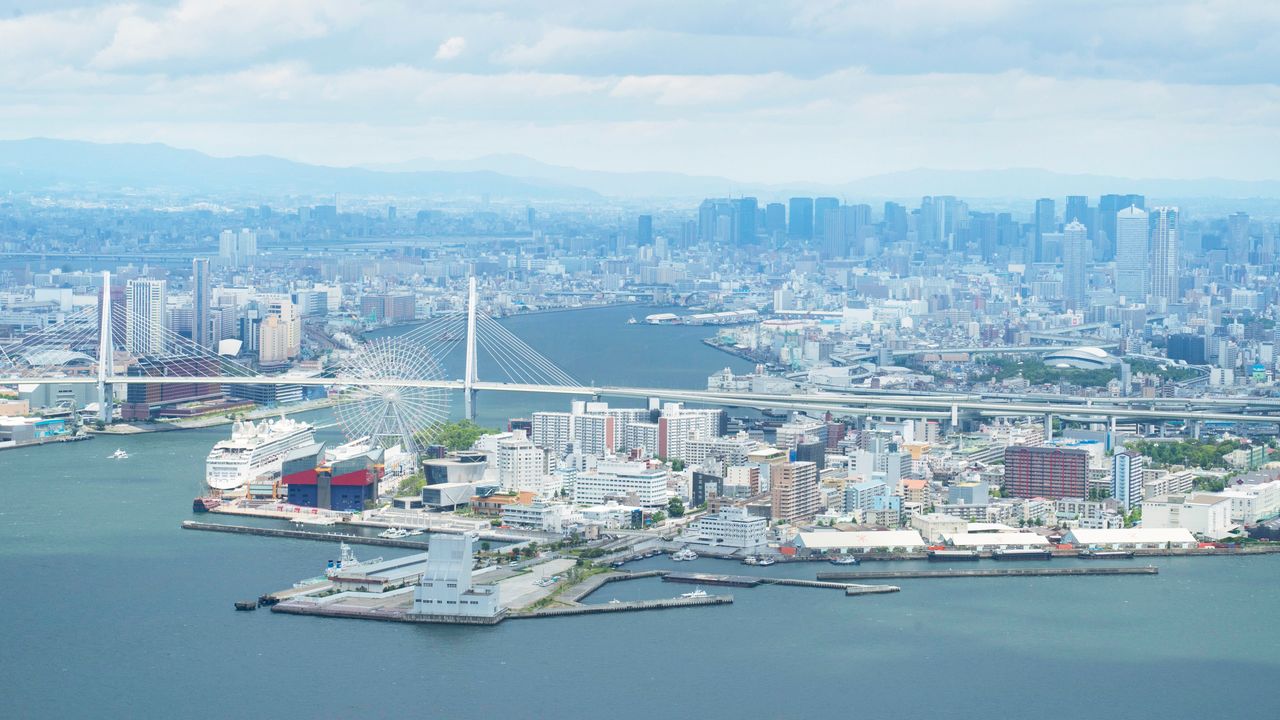 Knowing Osaka’s “North” and “South”: The Kita and Minami Districts

Travel Sep 20, 2019
Guidebooks to Osaka feature multiple references to the city’s “Kita” (north) and “Minami” (south) districts, but the absence of any clear definition for these areas can be confusing for visitors from overseas.

As of the beginning of October 2019, the operators of the Hankyū and Hanshin railways that link up the Kansai area will rename Umeda Station “Osaka-Umeda Station.” As any local knows, Umeda is the rail terminal that serves central Osaka: the new name aims to make this clear to the increasing number of foreign visitors to the city. 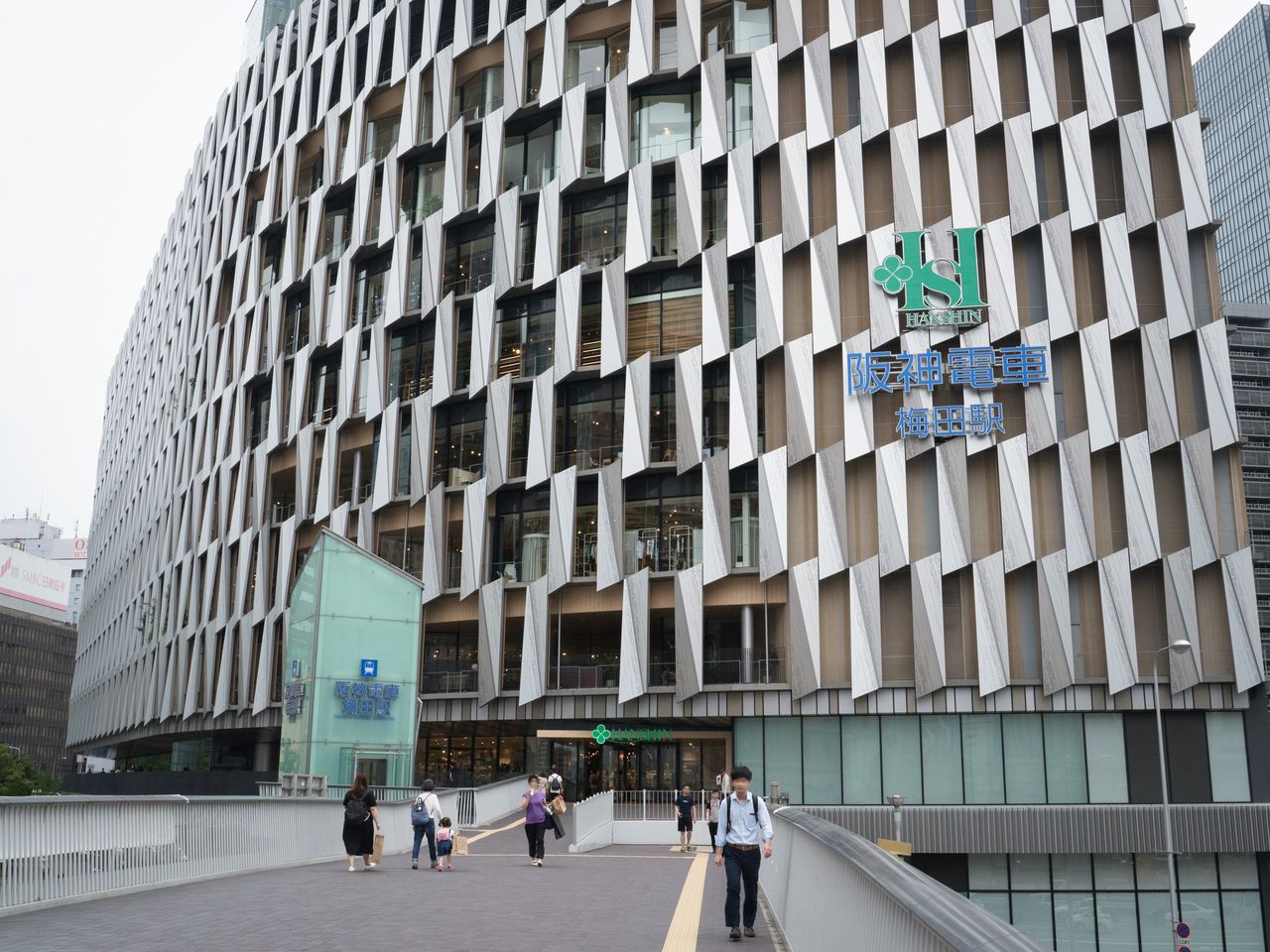 Umeda Station, served by the Hankyū and Hanshin lines, is adjacent to Osaka Station, which is served by four JR lines. Together, they comprise the largest rail terminal in west Japan, with the Hankyū, Hanshin, and JR stations used by 510,000, 170,000, and 870,000 passengers, respectively, every day. Despite the size of the terminal, the inconsistent names often cause confusion for tourists from outside Kansai, in particular foreign tourists, who do not realize that Umeda Station and Osaka Station are essentially the same thing. Everyone has heard the story about the tourist who hails a taxi outside the latter and says, “Take me to Umeda Station,” much to the annoyance of the driver. 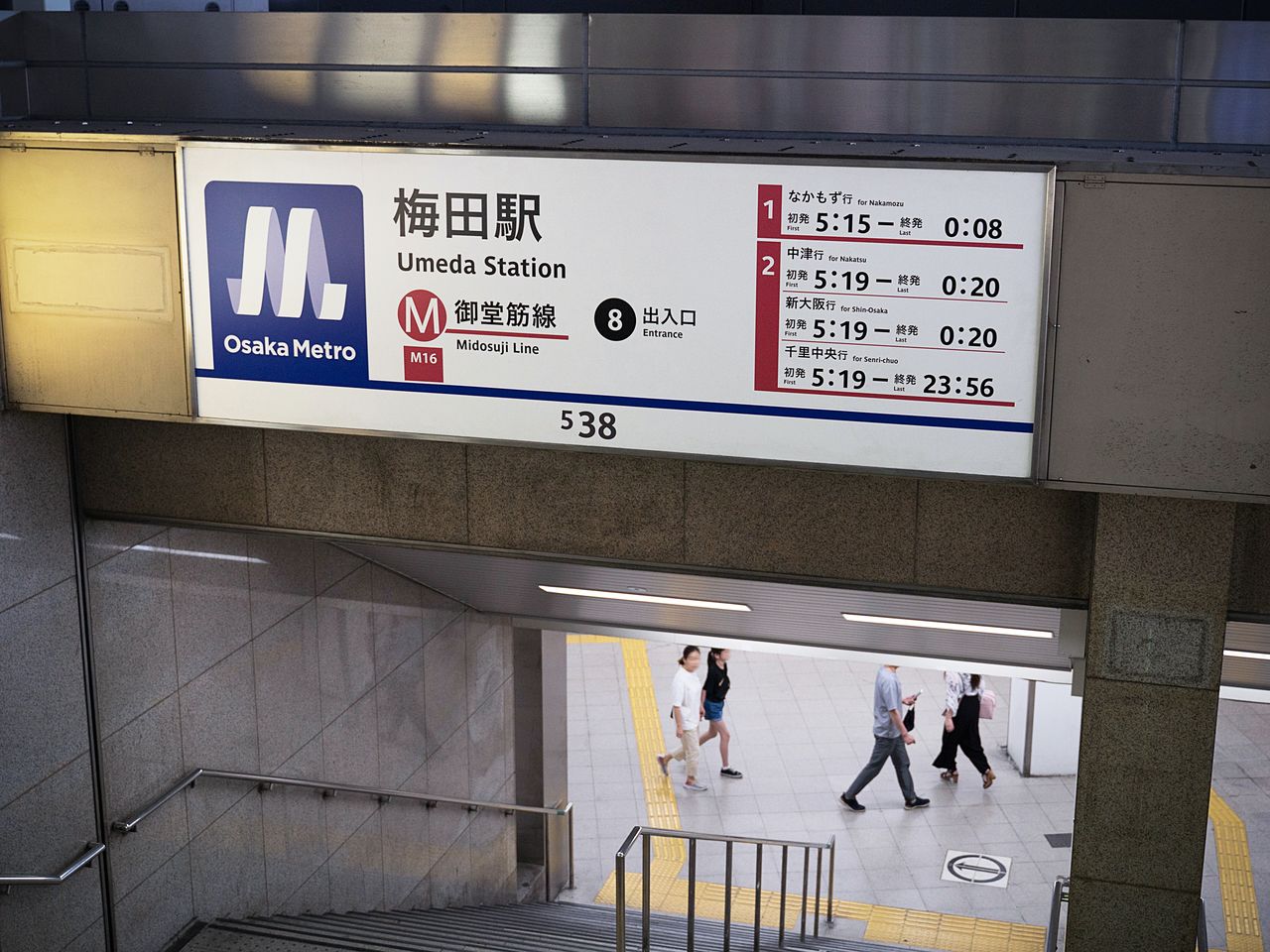 There are currently no plans to change the name of Umeda Metro Station. 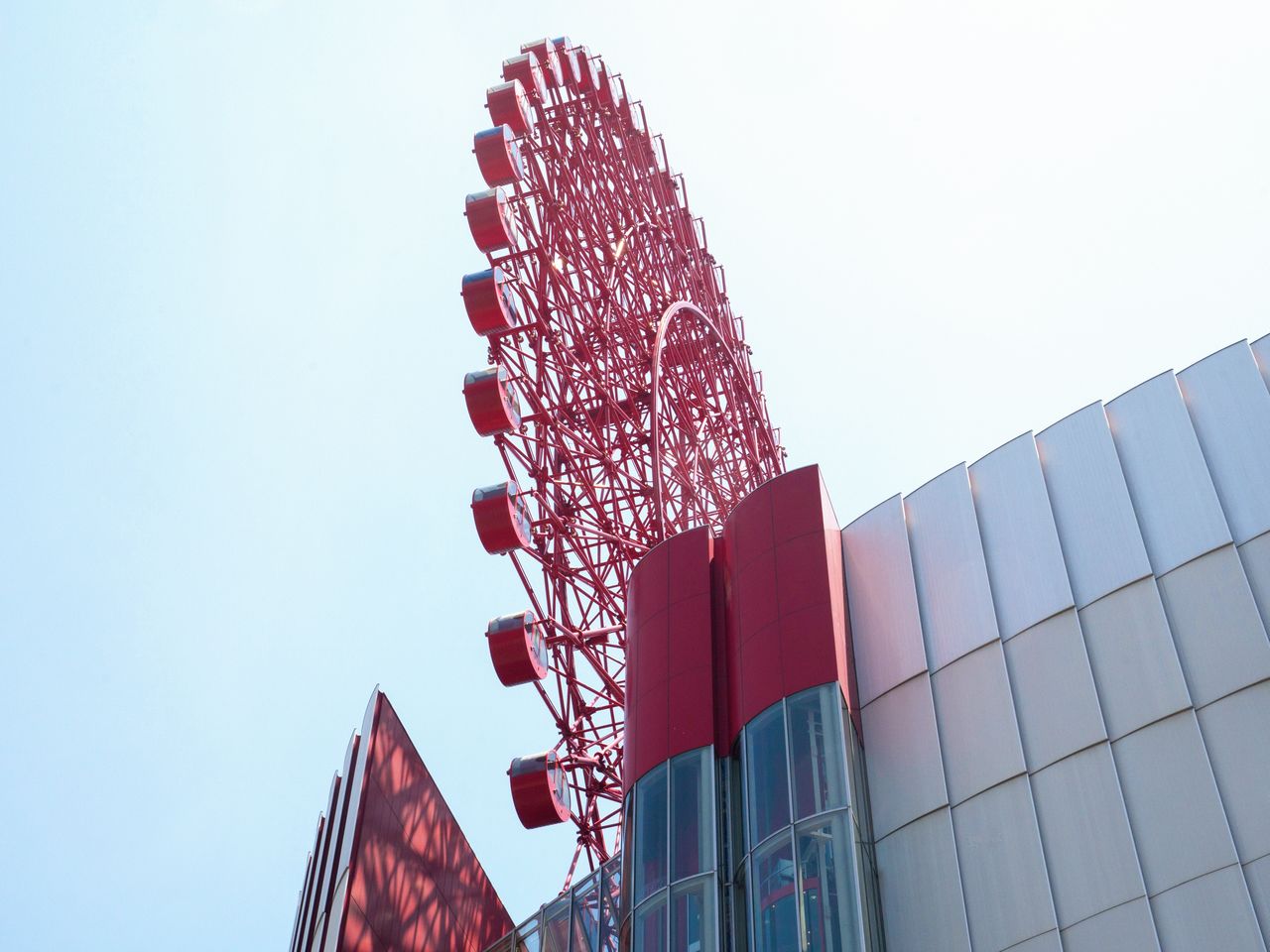 The red Ferris wheel on top of Hep Five is a landmark for both Umeda and the Kita area.

Visitors to Osaka are also confused by the labels “Kita” and “Minami.” These designators are well established in Osaka, even appearing in municipal bylaws and official documents, and yet they are not clearly defined. They are not used in addresses, and there are no railway stations for either. While people from elsewhere in Japan have a vague idea that “Kita” refers to Umeda, the Osaka Station area, and Kitashinchi, and “Minami” refers to Dōtonbori and the Nanba Station area, different organizations, media, and individuals use the terms differently. 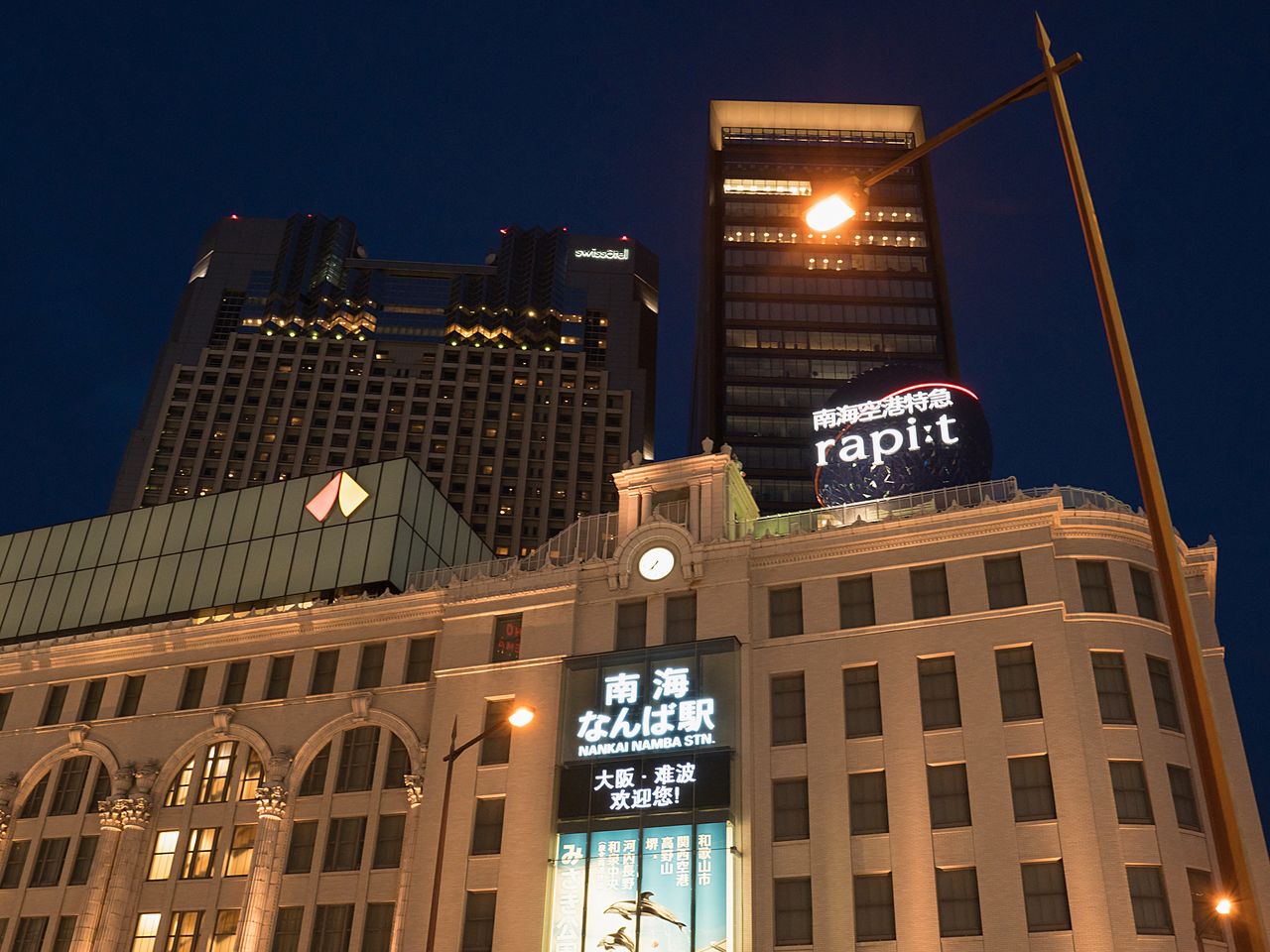 In the Edo period (1603–1868), Kita and Minami were both upscale districts of Osaka. Kita started out as a licensed pleasure district in Dōjima Shinchi that was popular in the seventeenth century. When a rice market was established in Dōjima in 1730, transforming the area into the heart of what was then Japan’s commercial capital, the brothels relocated to Sonezaki-Shinchi on the north side of the river. The area enjoyed its heyday as a playground for wealthy merchants.

In 1874, the government-administered Osaka Station was established in Umeda, resulting in the expansion of the surrounding shopping district, which came to be called “Hokuyō” or simply “Kita.” The name Sonezaki-Shinchi remains to this day, in the form of “Kita-Shinchi,” home of exclusive hostess clubs and gourmet restaurants. 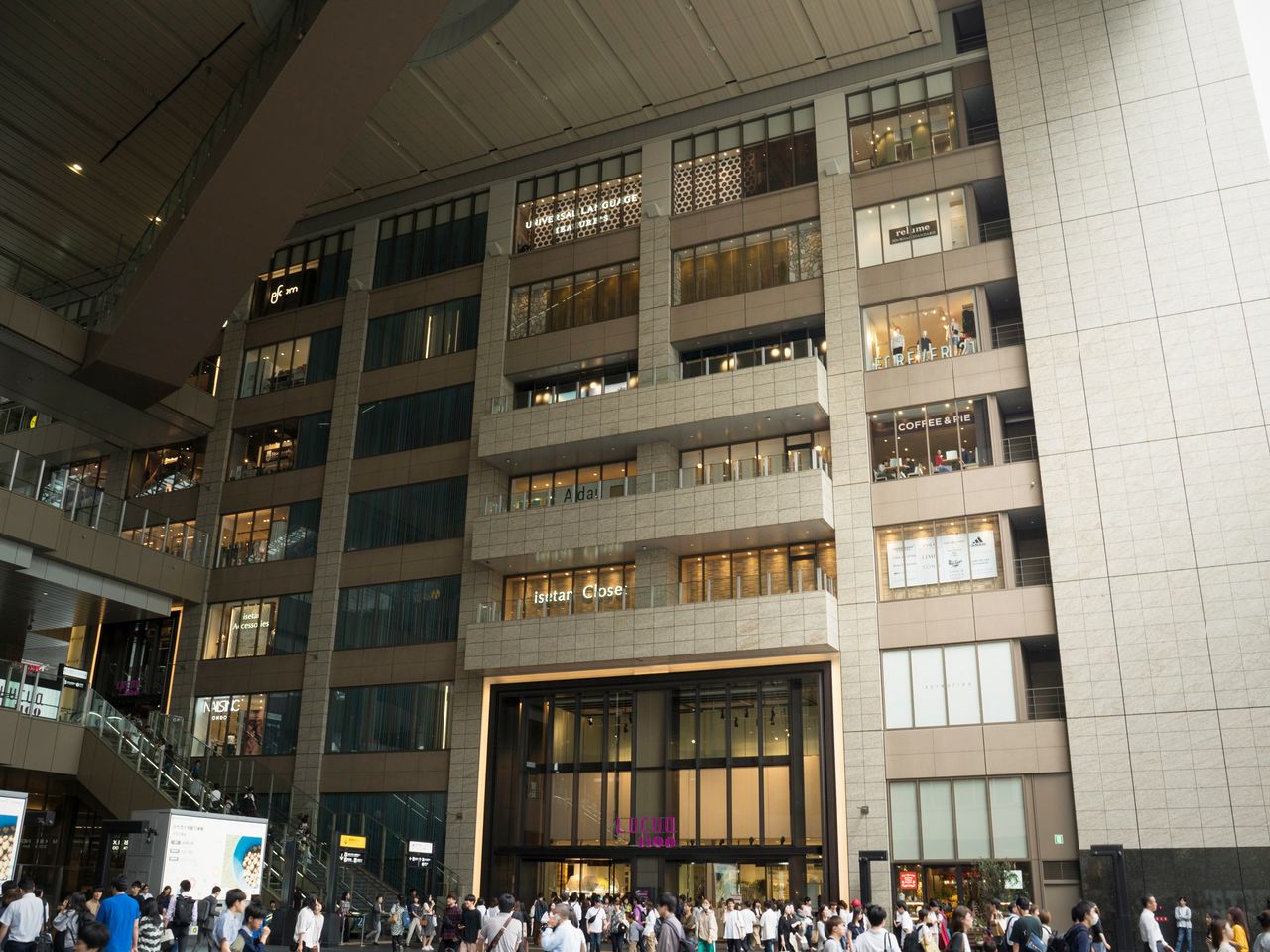 Together, Lucua 1100 and Lucua, which adjoin Osaka Station, form one of the largest station shopping complexes in Japan. 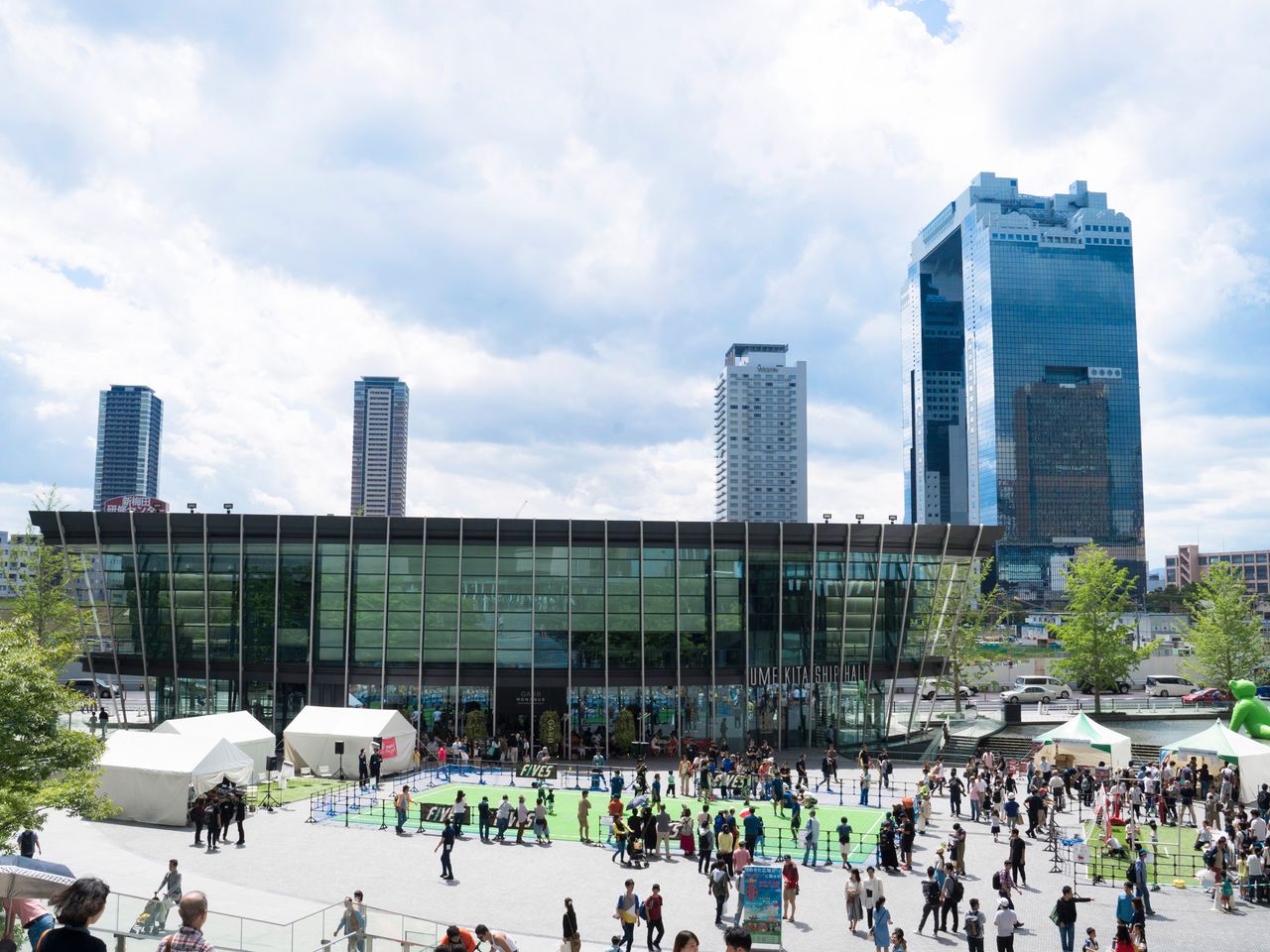 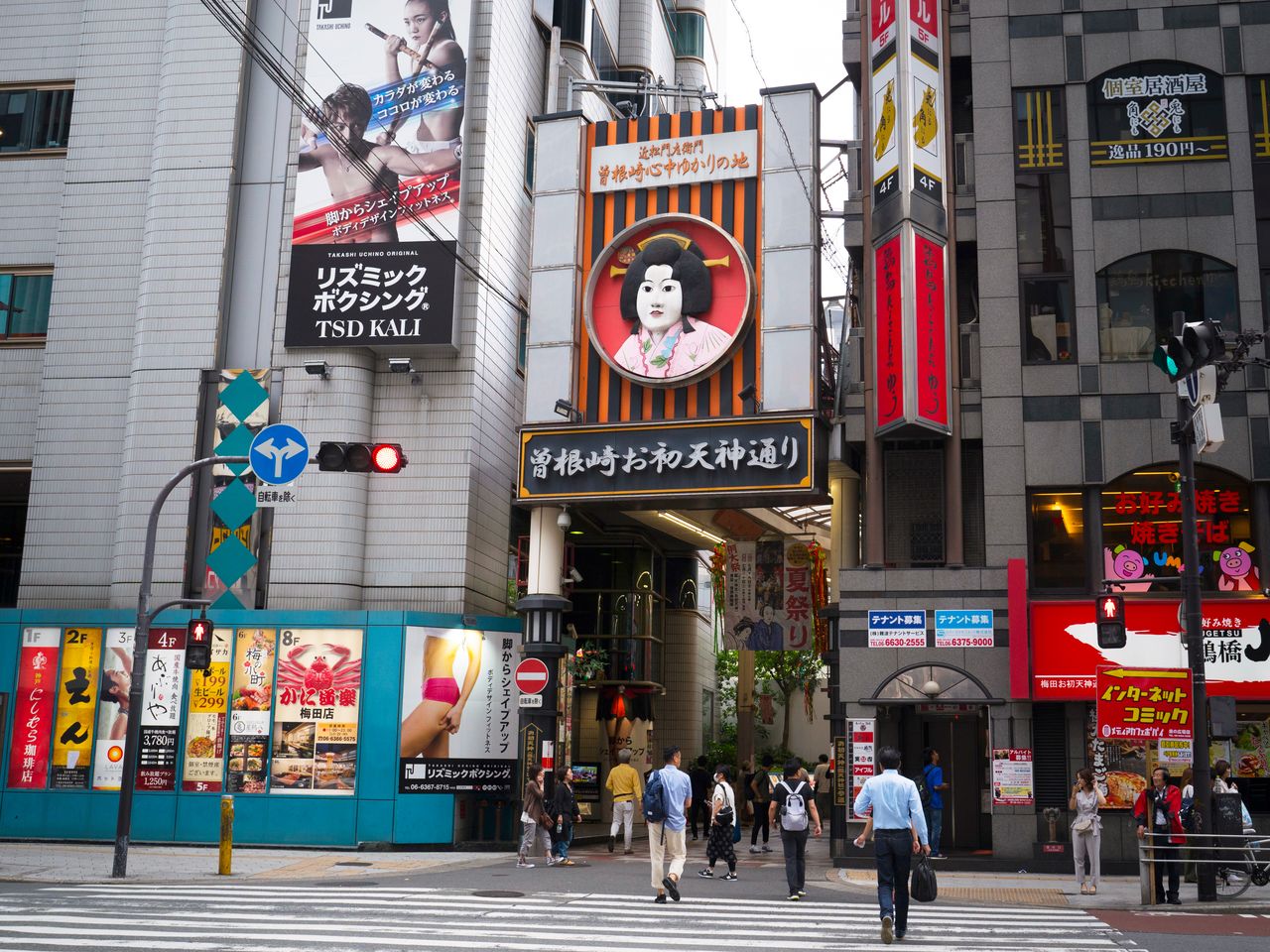 Minami has its roots in the five geisha districts of Nanchi. When theaters began to pop up along the Dōtonbori canal, which was constructed in 1615, an entertainment quarter flourished around them. The five districts of Sōemonchō, Kurōemonchō, Yaguramachi, Sakamachi, and Nanba Shinchi came to be abbreviated to “Nanchi” (the southern districts) and then simply “Minami” (south). Unlike Kita, to which samurai would travel from the domain warehouses and residences of Nakanoshima and Dōjima, Minami was bustling with tradespeople and other common folk. Today, little has changed, with Kita a refined, urban space full of high-end restaurants and bars that is more popular with older pleasure seekers, and Minami a hub for youth culture and an unpretentious destination for the masses. 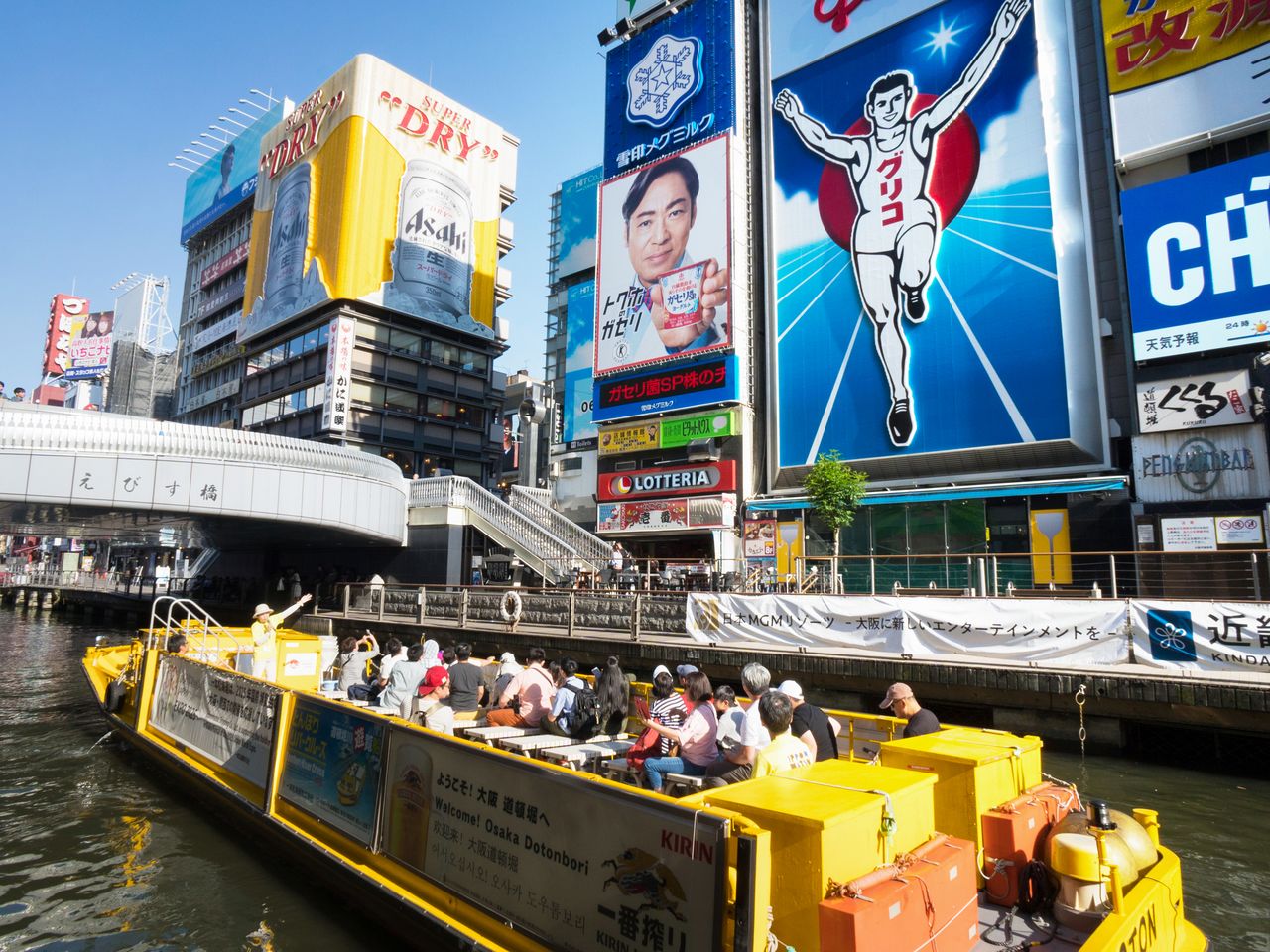 This iconic view of Minami includes Ebisubashi, known for its Glico runner billboard. The Tonbori River Cruise is a popular way of seeing Dōtonbori from a boat. 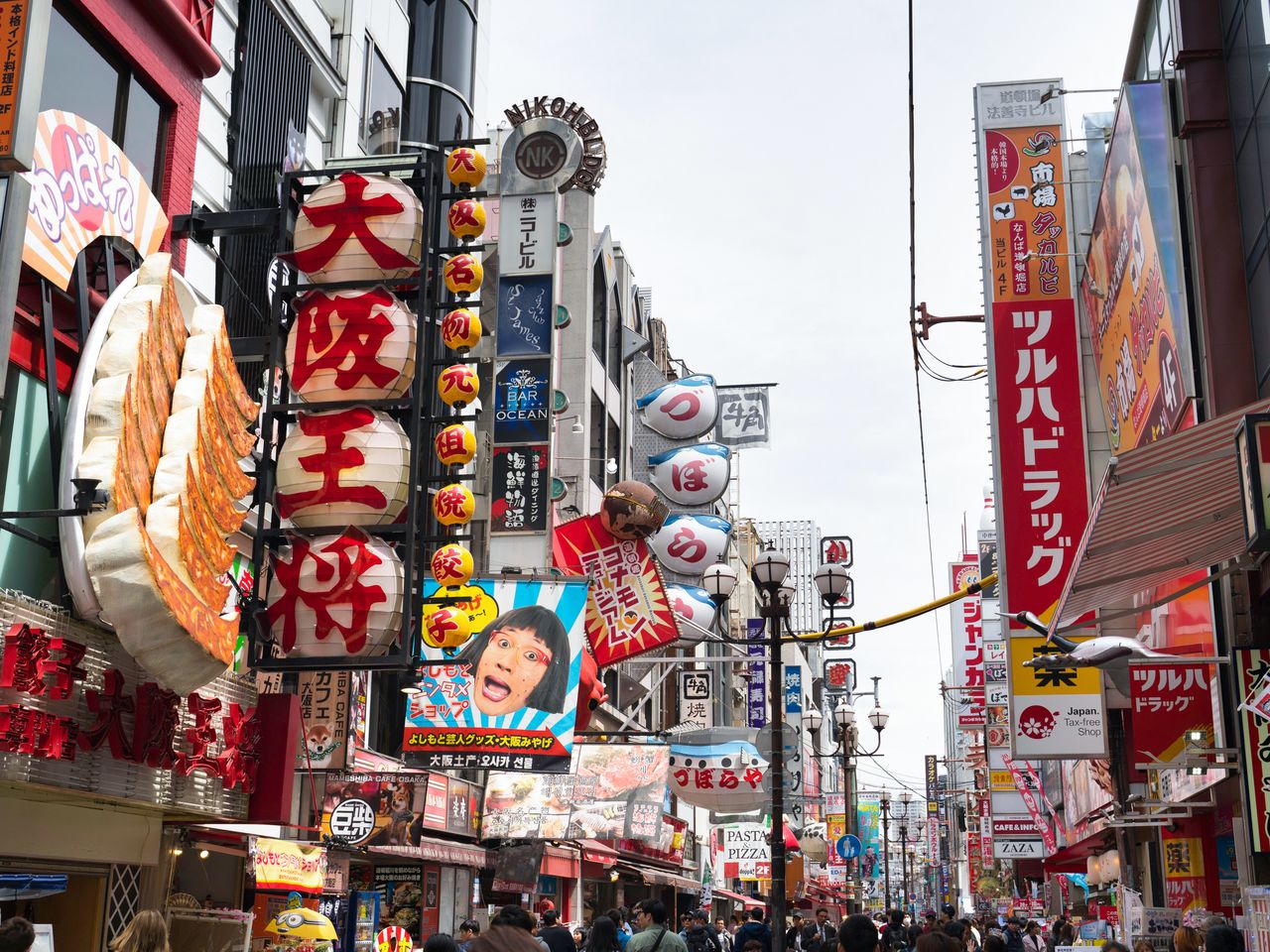 Dōtonbori, replete with oversized signs advertising crab and gyōza, is popular with foodies.

Visitors to Osaka should simply think of Kita as being centered in Umeda and taking in Kitashinchi, Dōjima, Nakanoshima, and Nishitenma, and Minami as being centered in Dōtonbori and Shinsaibashi and extending to Nanba Station in the south, Nihonbashi—home of Kuromon Market—in the east, and Horie—known for its used clothing stores and trendy cafes—in the west. 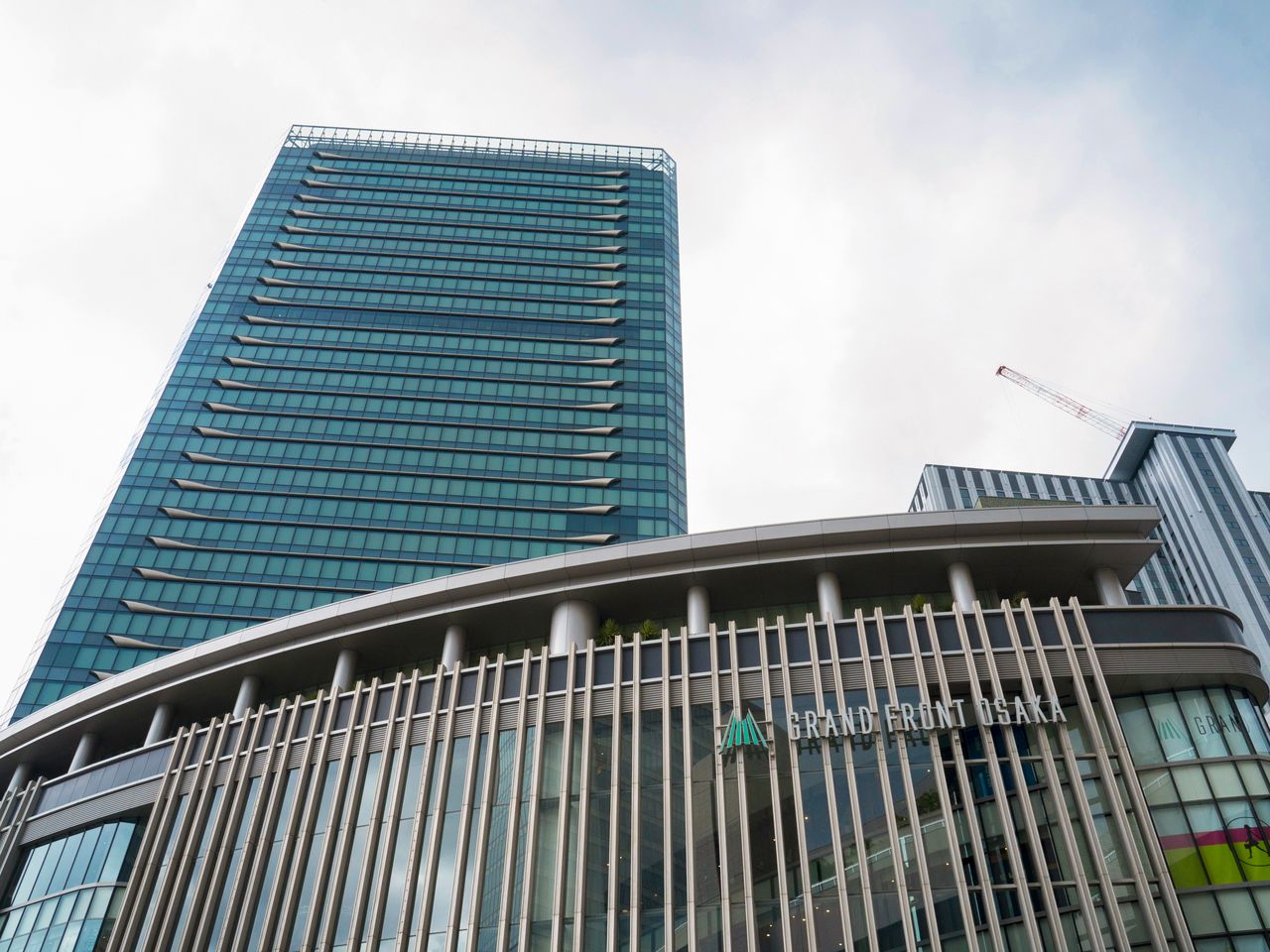 The Grand Front Osaka development exemplifies the redevelopment of the Kita area, which has now entered a new phase. 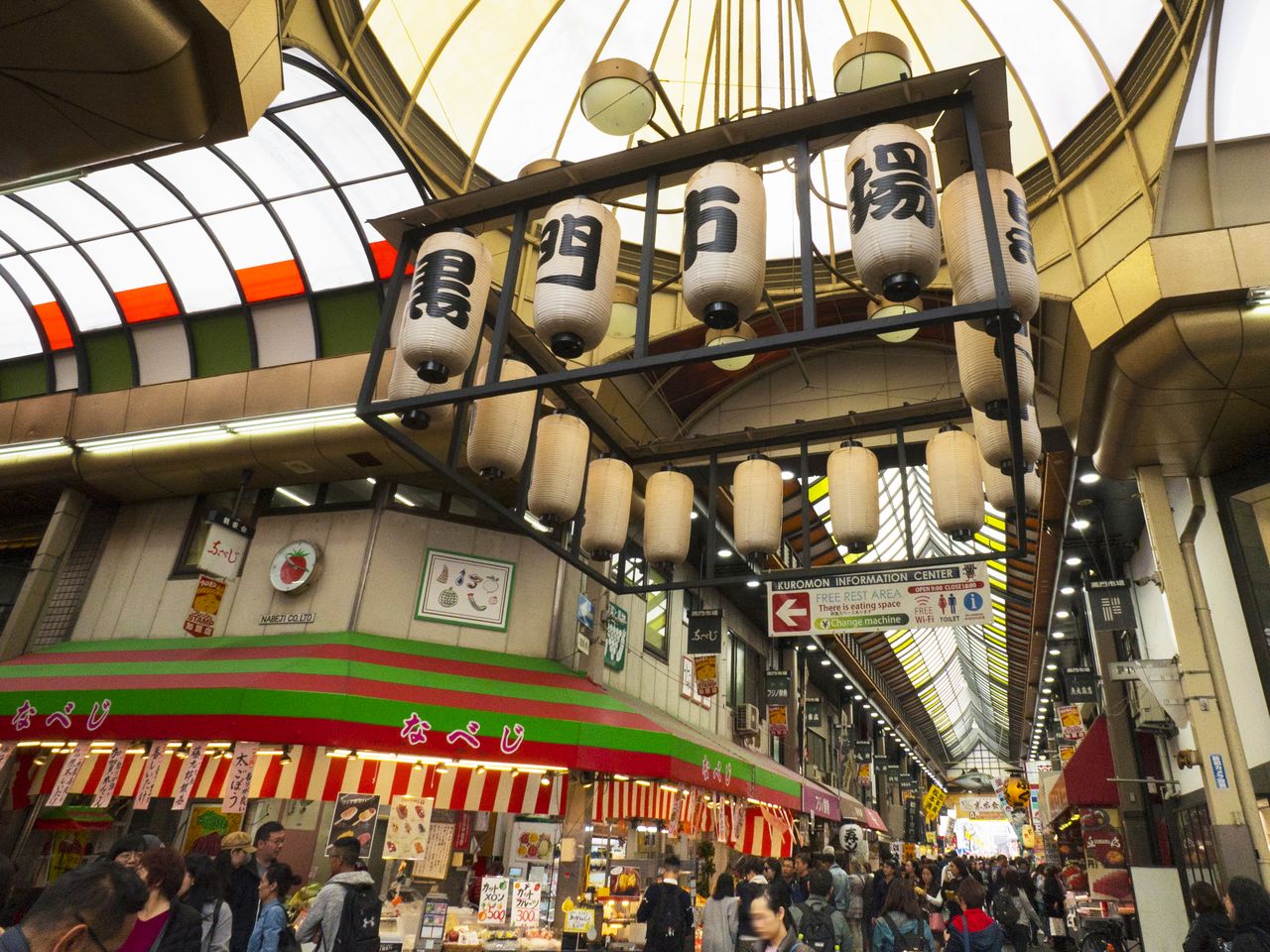 Kuromon Market in Nihonbashi, famous for fresh seafood and other produce, is a popular destination in Minami.

Will “Nishi” Catch on?

A new label, “Nishi,” meaning “west,” is being used to refer to the bay area around Yumeshima, home of Expo 2025 and a possible location for an integrated casino resort development. By 2024, the Osaka Metro’s Chūō line will be extended to Yumeshima and connect to the planned Yumeshima Station Tower Building. 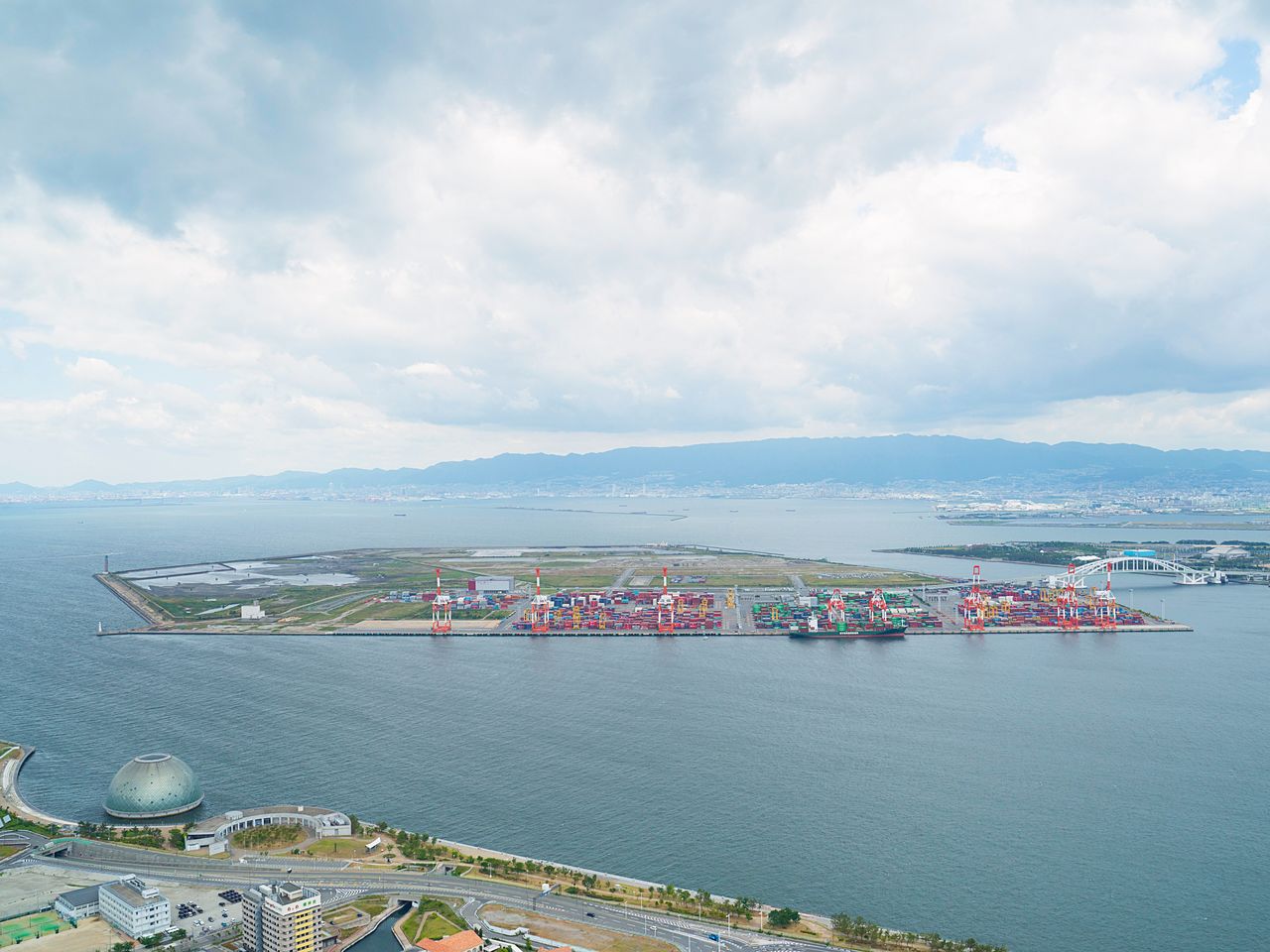 Yumeshima, the site for Expo 2025. As of June 2019, the only sign of activity was a few shipping containers. Over the bridge in the background is Maishima.

The man-made islands of Yumeshima, Maishima, and Sakishima (Sakishima was the location for the Group of 20 Osaka Summit) were initially slated as the location for an ambitious project named “Techno-Port Osaka,” but the project suffered setbacks after the collapse of the Japanese property market in the 1990s and the failure of Osaka’s bid to host the Olympic games. However, the area is experiencing a comeback thanks to Expo 2025 and Osaka’s casino bid. As it is home to popular tourist attractions such as Universal Studios Japan and Osaka Aquarium Kaiyūkan, an increase in demand for hotels and shopping facilities has long been projected in the bay area. 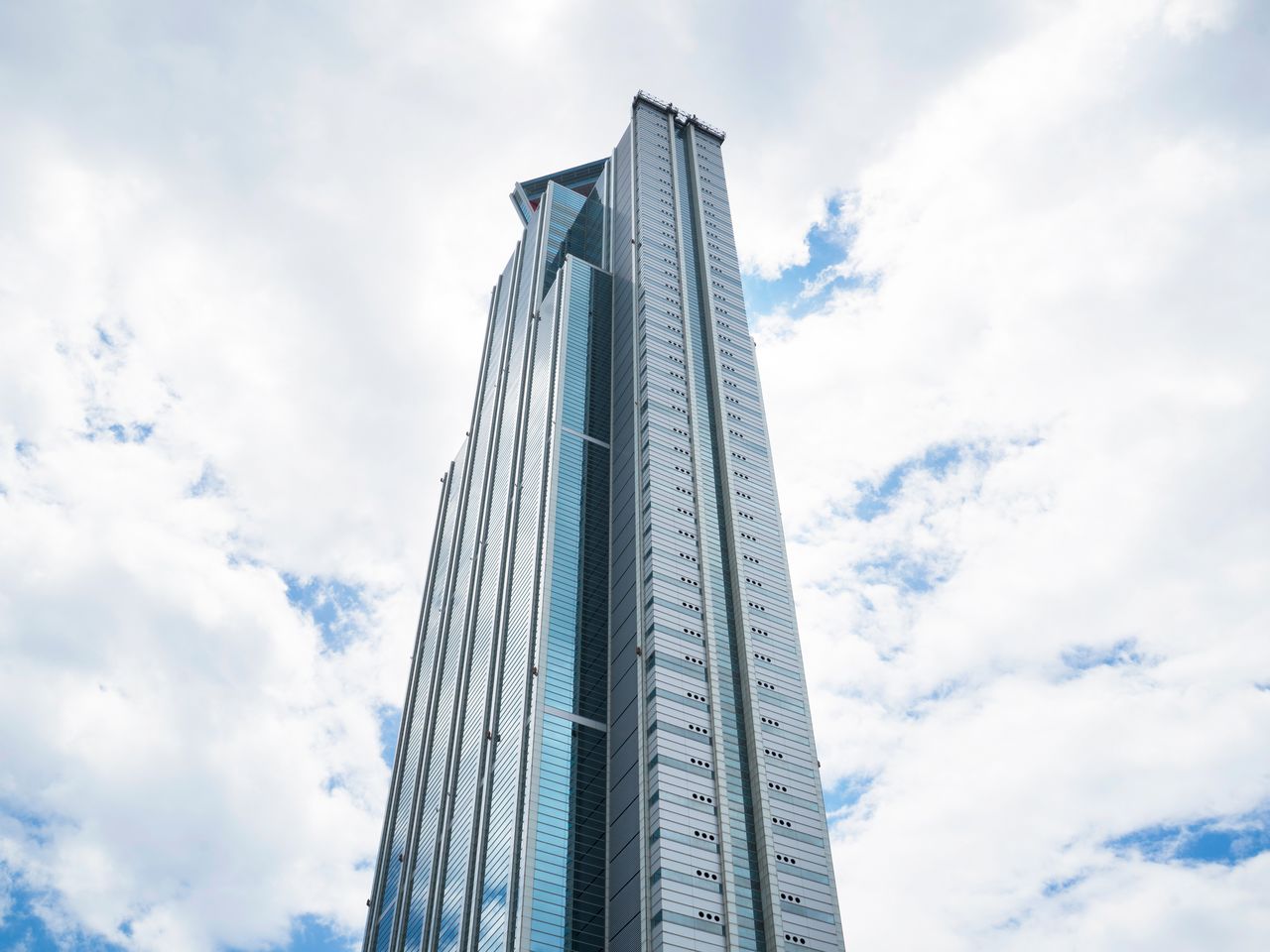 The Osaka Prefectural Government Sakishima Building, currently the landmark for the “Nishi” area. 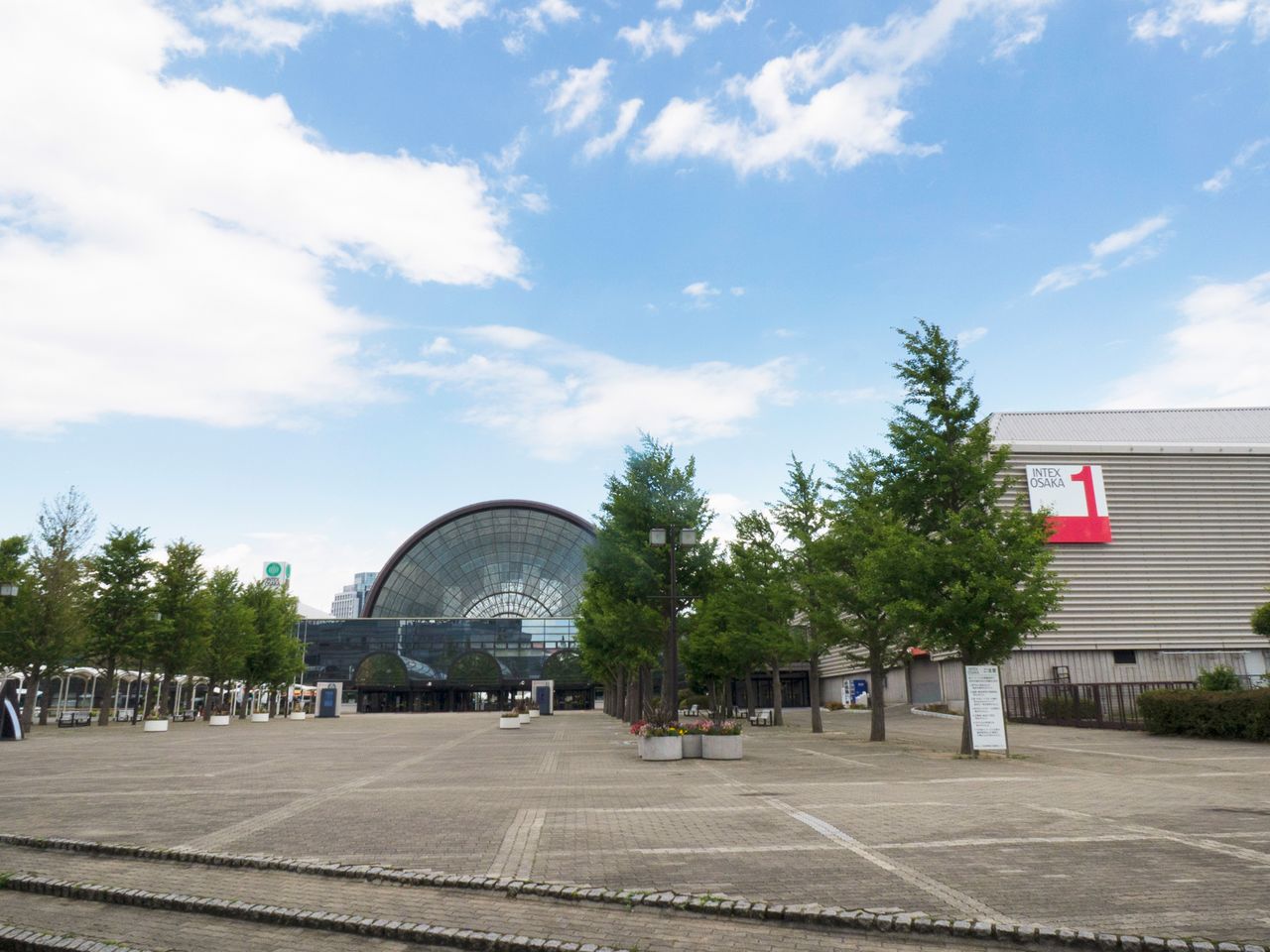 Intex Osaka, the venue for the G20 Summit.

While the local government and property developers tend to drop the “Nishi” label into conversation at every chance they get, it remains to be seen whether the new name will actually catch on among Osaka residents. Unlike Kita and Minami, whose popularity has been steadfast since Edo times, the crowd-pulling potential of the new “Nishi” area remains an unknown quantity. 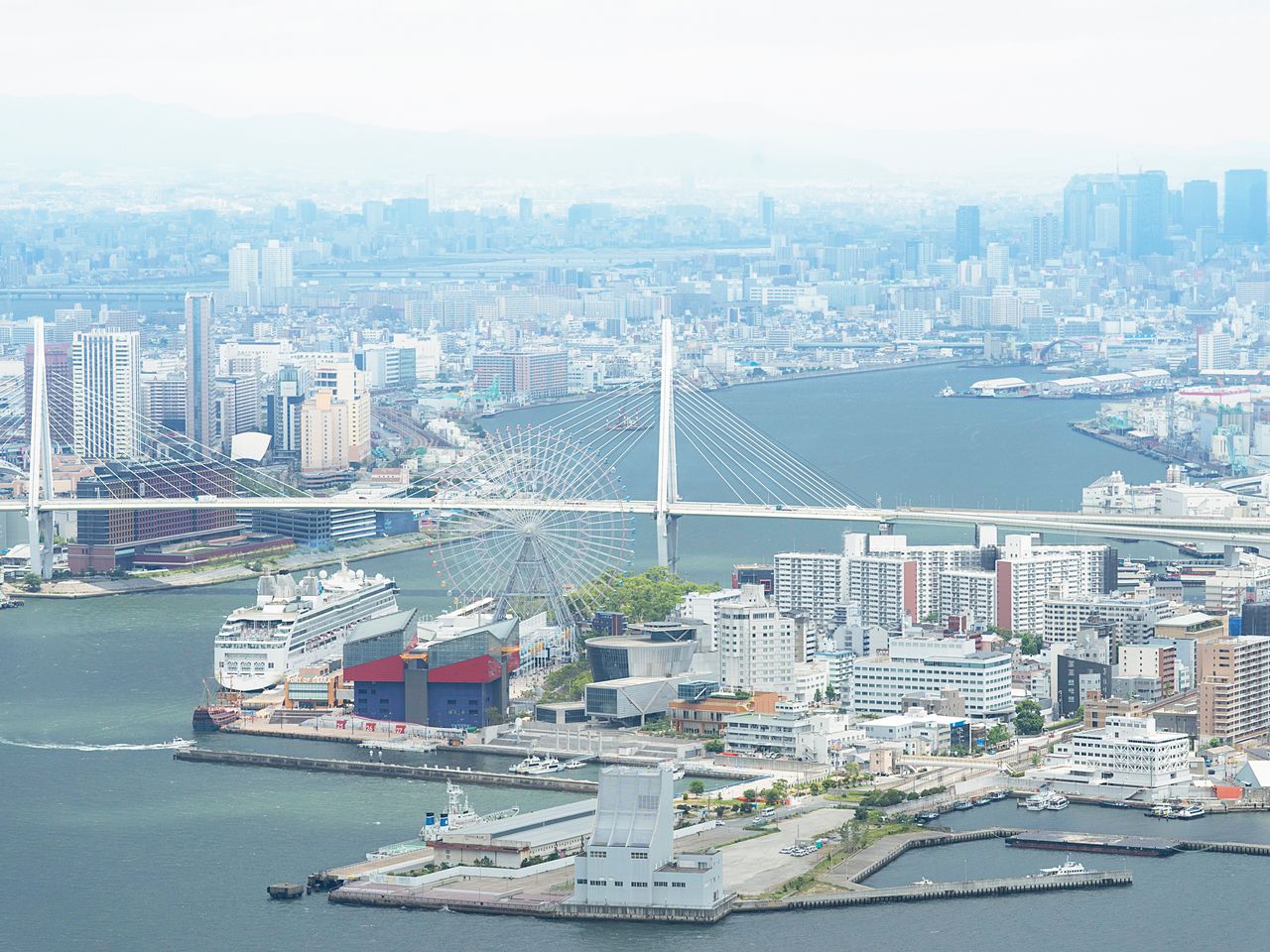 Tenpōzan Harbor Village seen from Sakishima. The blue and red building in front of the Ferris wheel is Osaka Aquarium Kaiyūkan.