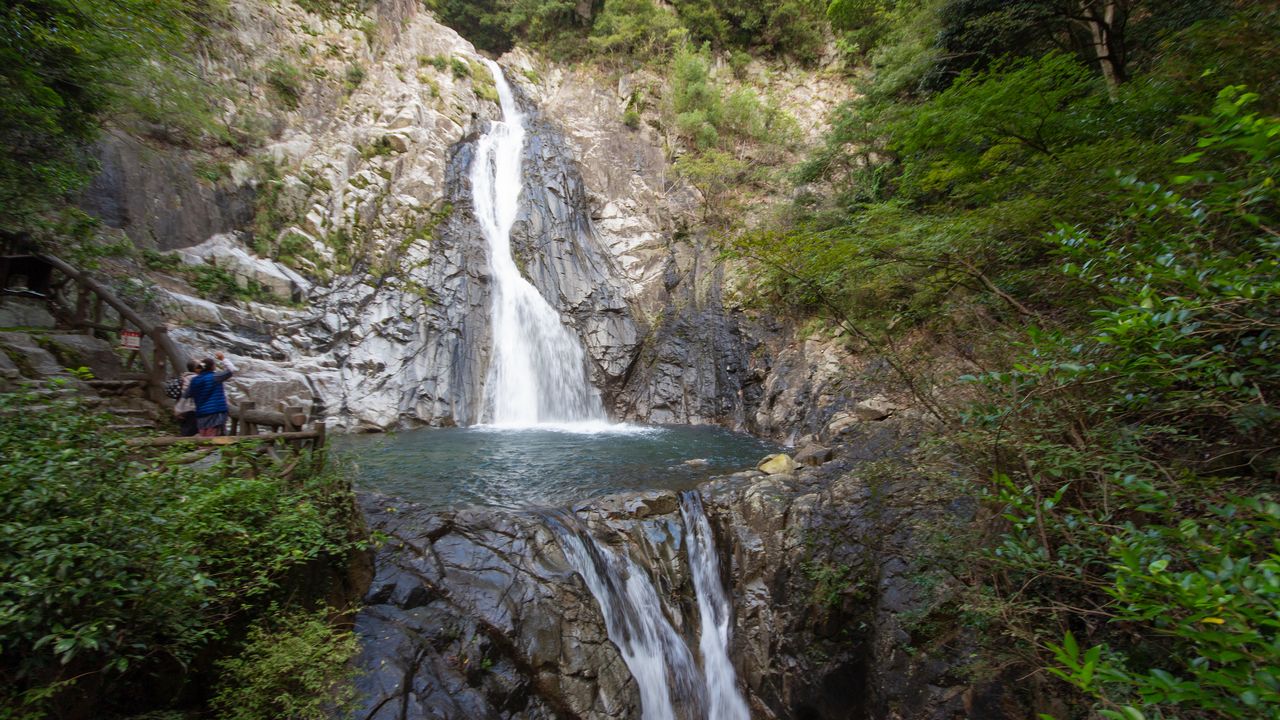 City Hiking: Nunobiki Falls in the Heart of Kobe

The Port of Kobe, which opened to the West in 1868, has prospered as a hub for shipping in the Seto Inland Sea since the eighth century. Known as a port city with an international character, Kobe’s location at the foot of the Rokkō Mountain Range also puts it on the map. Just 2 kilometers from Kobe Port Tower, the symbol of Kobe’s waterfront, is the beginning of a lush walking track into the mountains. 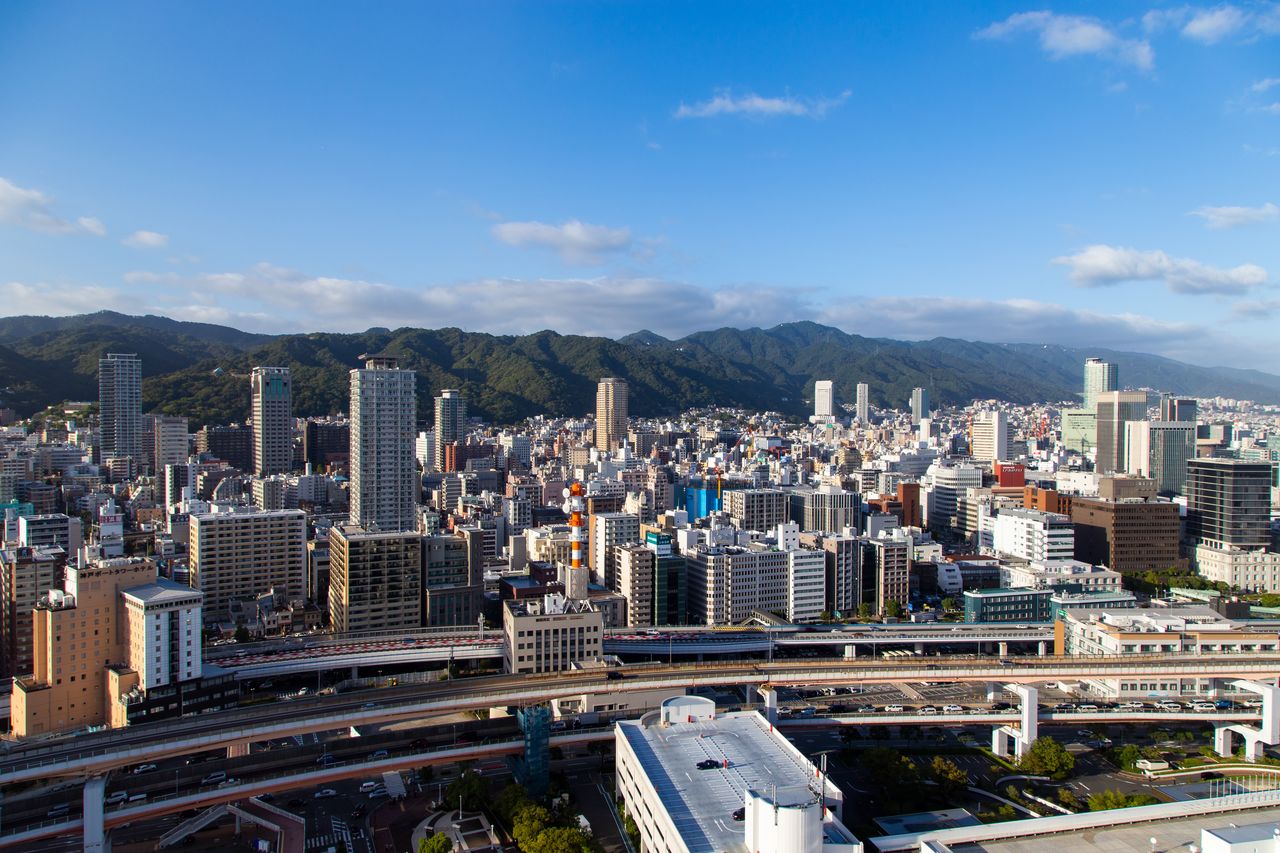 Central Kobe seen from Kobe Port Tower. The Rokkō Mountain Range is visible in the distance.

A love of hiking and mountaineering is just one of many things that Kobe imported from the West. In 1874, a party of Westerners equipped with climbing axes and shoes scaled Mount Rokkō, in what is believed to be Japan’s first feat of European-style alpinism. Until then, while mountain worshippers and monks in training would sometimes venture into the hills, the concept of climbing for recreation was basically unheard of. However, in neighborhoods such as Kitano, where Japanese and foreigners were permitted to coexist, locals had significant exposure to Western culture and customs, and the idea of hiking soon caught on among Kobeites. 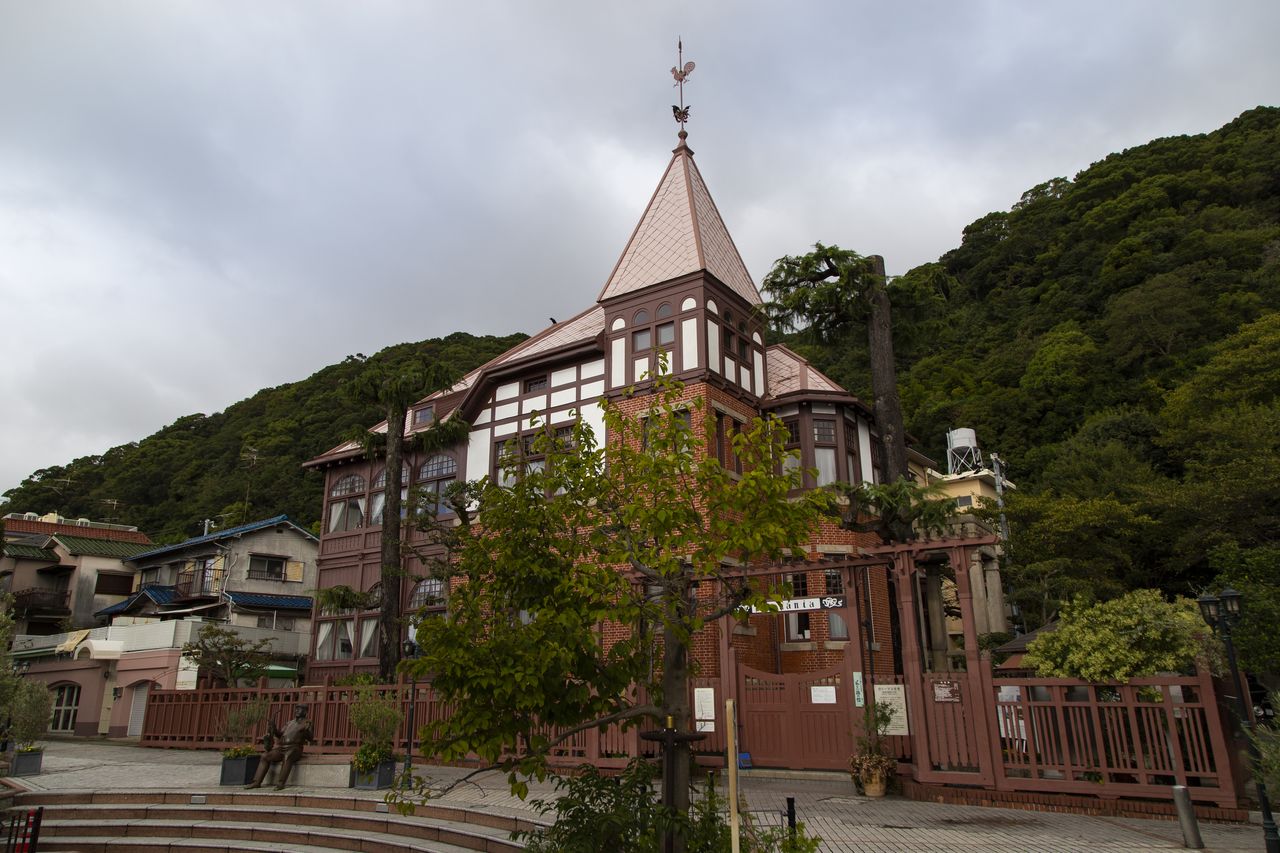 Weathercock House, formerly a mansion for Western merchants, is nestled against the Rokkō foothills.

Just behind Shin-Kobe Shinkansen station is a spot where visitors to the area can experience Kobe’s terrain and culture in a matter of minutes. At Nunobiki Falls, you can enjoy real hiking and commune with nature mere minutes from the station. Many visitors to the falls have either just arrived in Kobe by Shinkansen or are here to tick off one final activity before they leave town.

Mount Rokkō looms over Shin-Kobe Station. You won’t even need a map to get to Nunobiki Falls—simply go down to the ground level of the station and follow the underground path to the north, which leads to a large sign stating that the falls are just 0.4 kilometers away. Immediately behind the station is a crystal-clear, mountain-fed river, which visitors are surprised to learn flows directly under the station building. 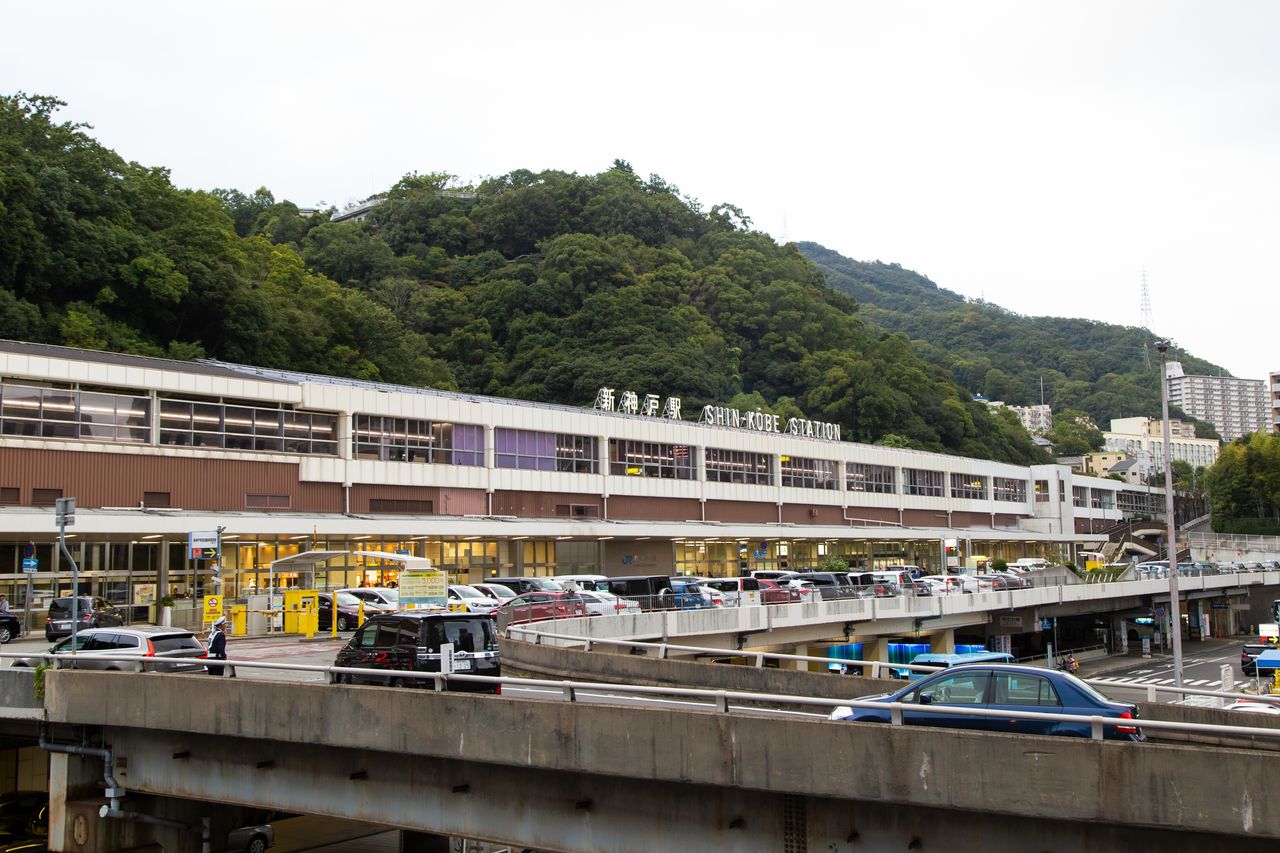 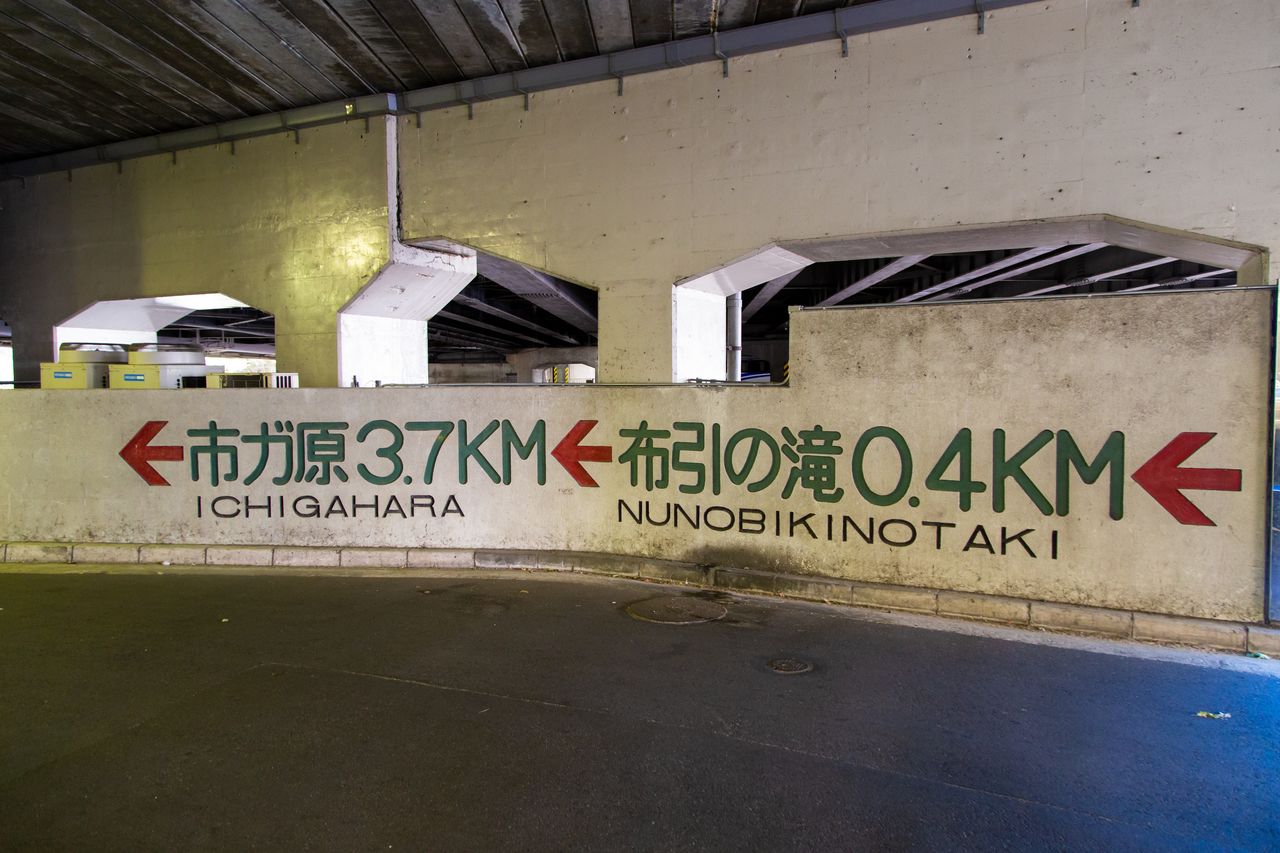 A passageway under the station will lead you to this sign. 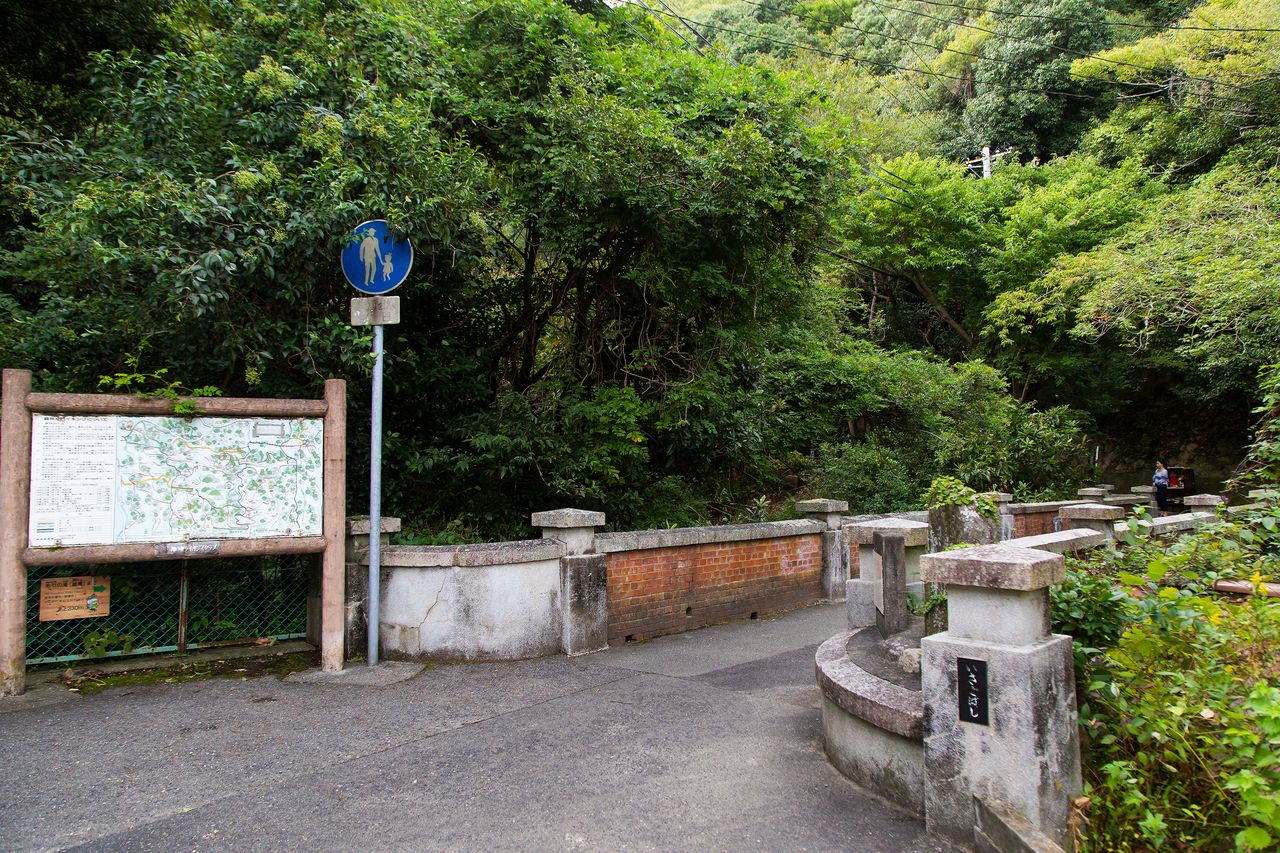 Isago Bridge marks the start of the track. 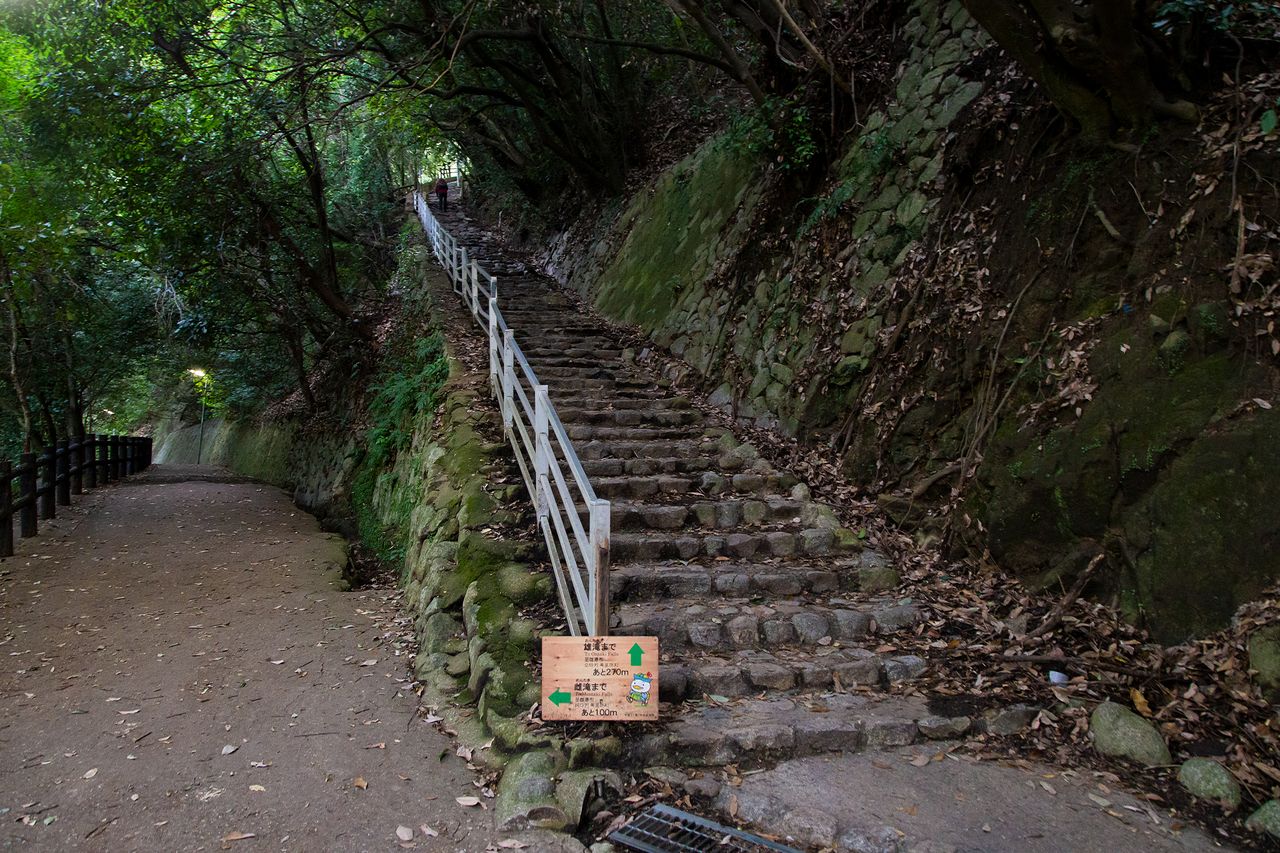 The steps to the right are the quickest way to reach Ontaki.

Nunobiki Falls actually refers to four waterfalls that feed the Nunobiki river: Ontaki, Mentaki, Meotodaki (the“husband and wife waterfall”), and Tsutsumigadaki (the “drum waterfall”). While Ontaki, with has the highest drop, is the best known in the Nunobiki group, the others are worth a visit too if you have time, even if you only get as far as Mentaki.

Mentaki is a beautiful, two-tier waterfall surrounded by forest so lush that it’s hard to believe you’re only five minutes from a shinkansen stop. As you listen to the sound of running water, you won’t believe that you were in a crowded railway station just moments earlier! While not the most direct route, visitors are recommended to walk the entirety of the walking course from Mentaki to Tsutsumigadaki and then continue on to Ontaki and Meotodaki. 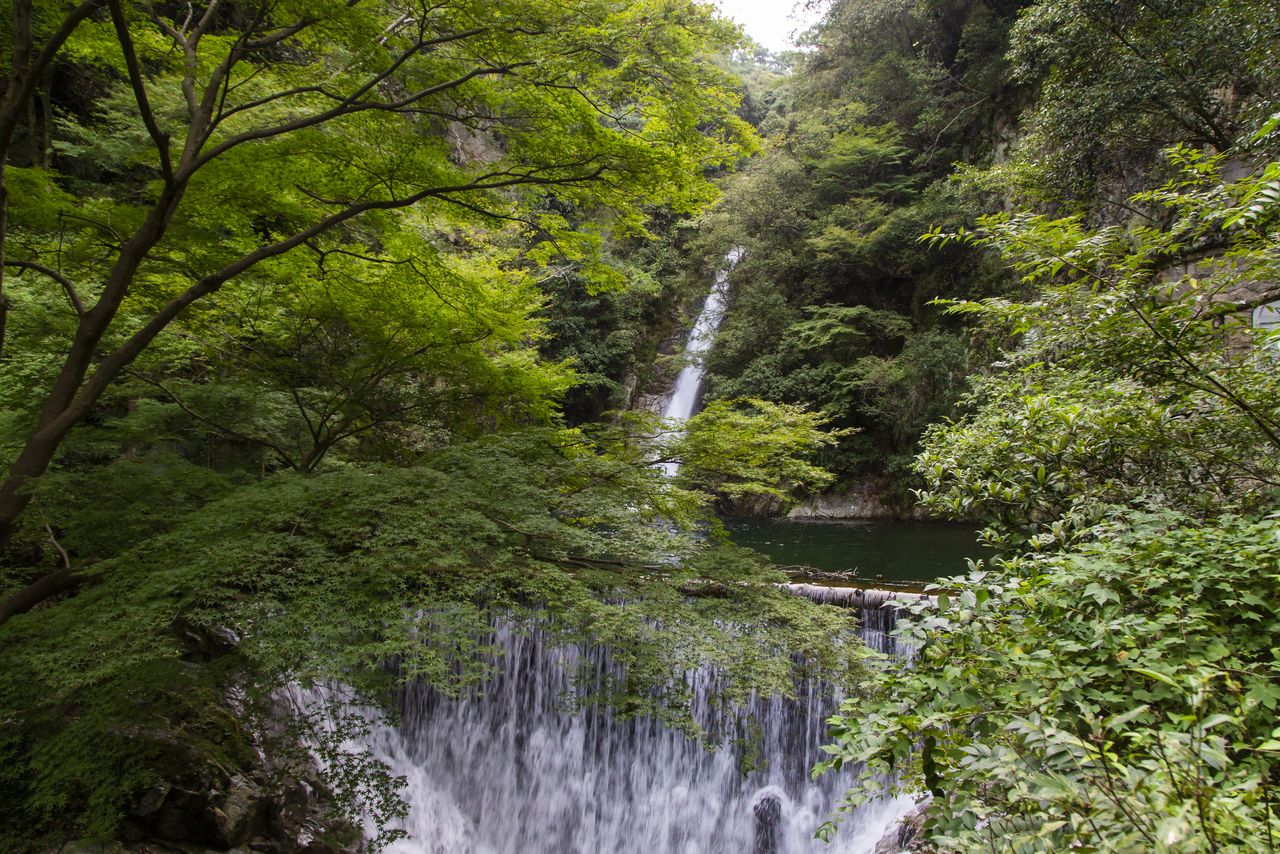 It’s hard to believe Mentaki is only five minutes from the station. 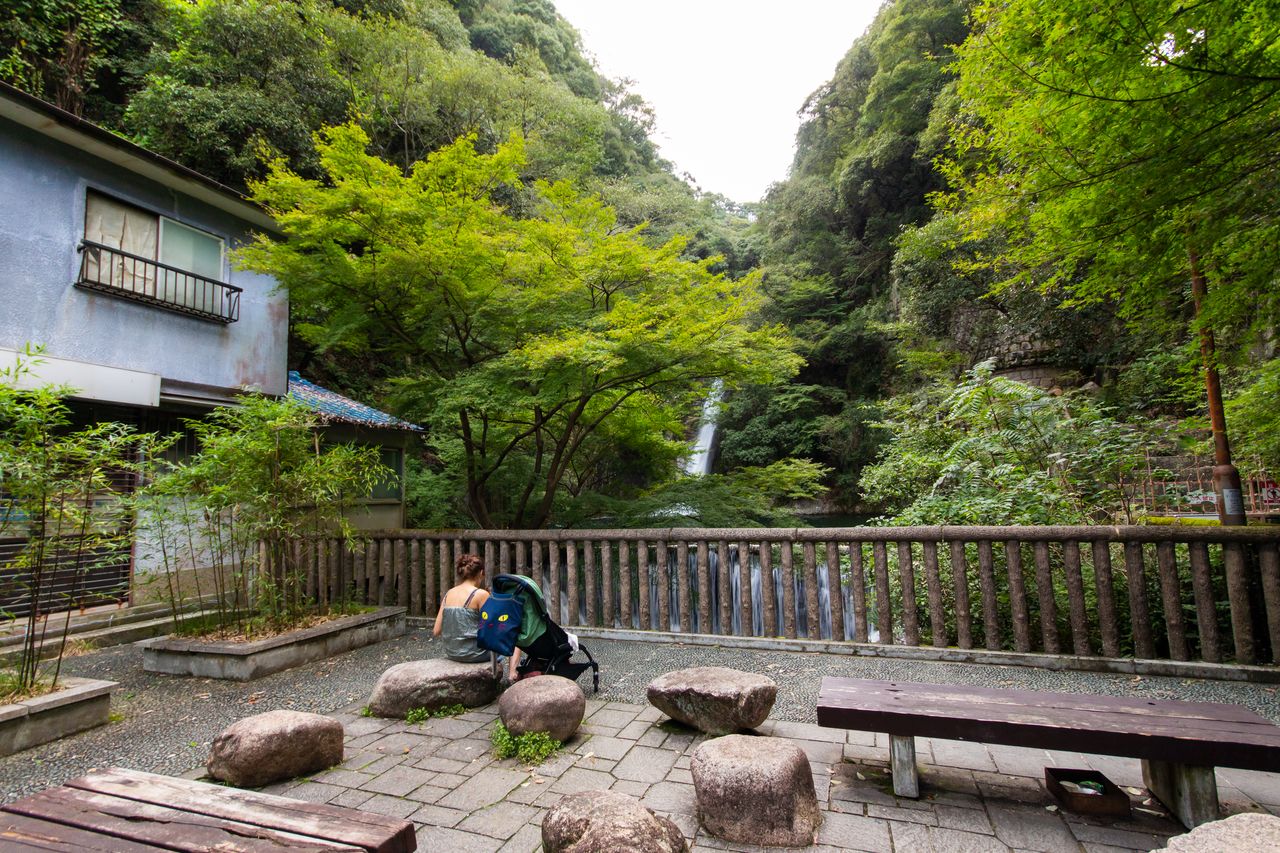 The first lookout. Sit back and enjoy the sounds of the waterfall.

From the fork in the track, it takes about 10 minutes to reach Ontaki. On the way, several points along the tree-lined route command views of Tsutsumigadaki below. While steep and slippery in places, the path is equipped with handrails, making it walkable in business shoes.

Ontaki is a magnificent, 43-meter-high waterfall. Twisting and turning as it spreads out, the ribbon of water is reminiscent of a piece of white cloth—hence the name Nunobiki, or “pulled cloth.” From the basin of Ontaki, the twin Meotodaki falls plunge further downward in two parallel streams. Opposite the waterfalls are benches where visitors can sit and contemplate this artwork of nature. 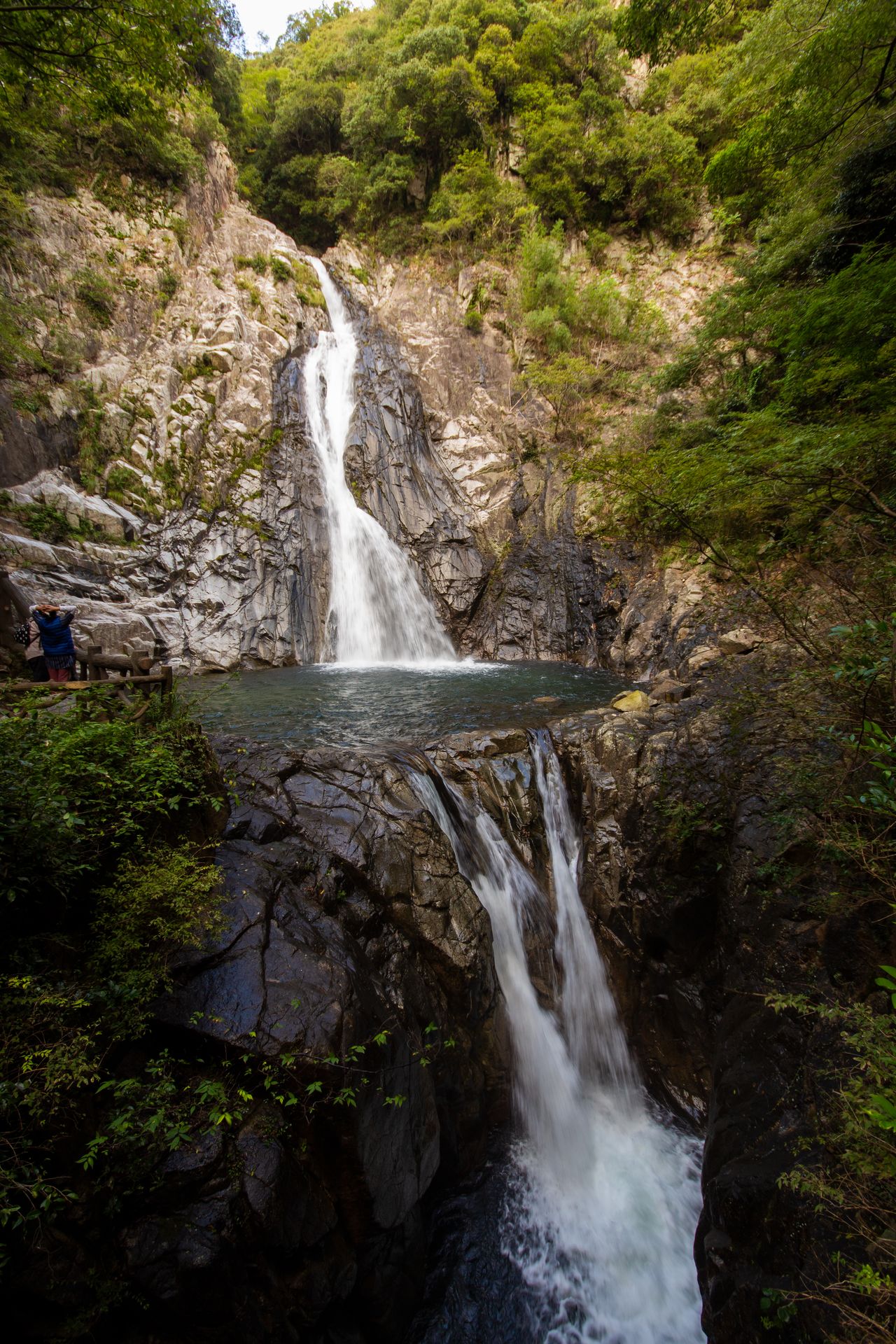 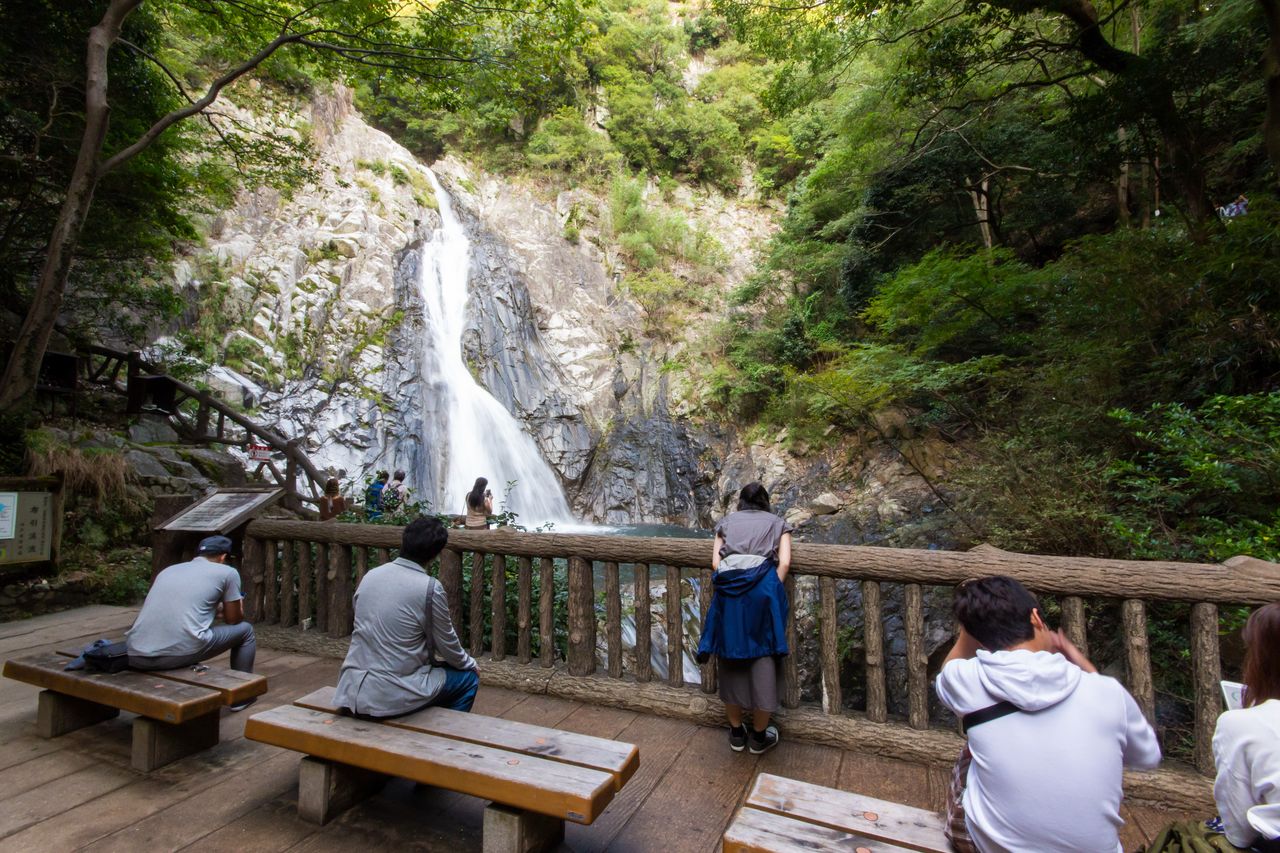 Viewing the majestic Ontaki amid the spray.

A Morning Luxury Only Possible in Kobe

Walk a little farther to the lookout, and you will experience part of the hiking culture that is so much a part of Kobe. Climb the steps to the right of Ontaki and walk on past the 100-year-old Ontaki teahouse. Another five minutes bring you to the observation area, where you can enjoy a view of the city and the sea. 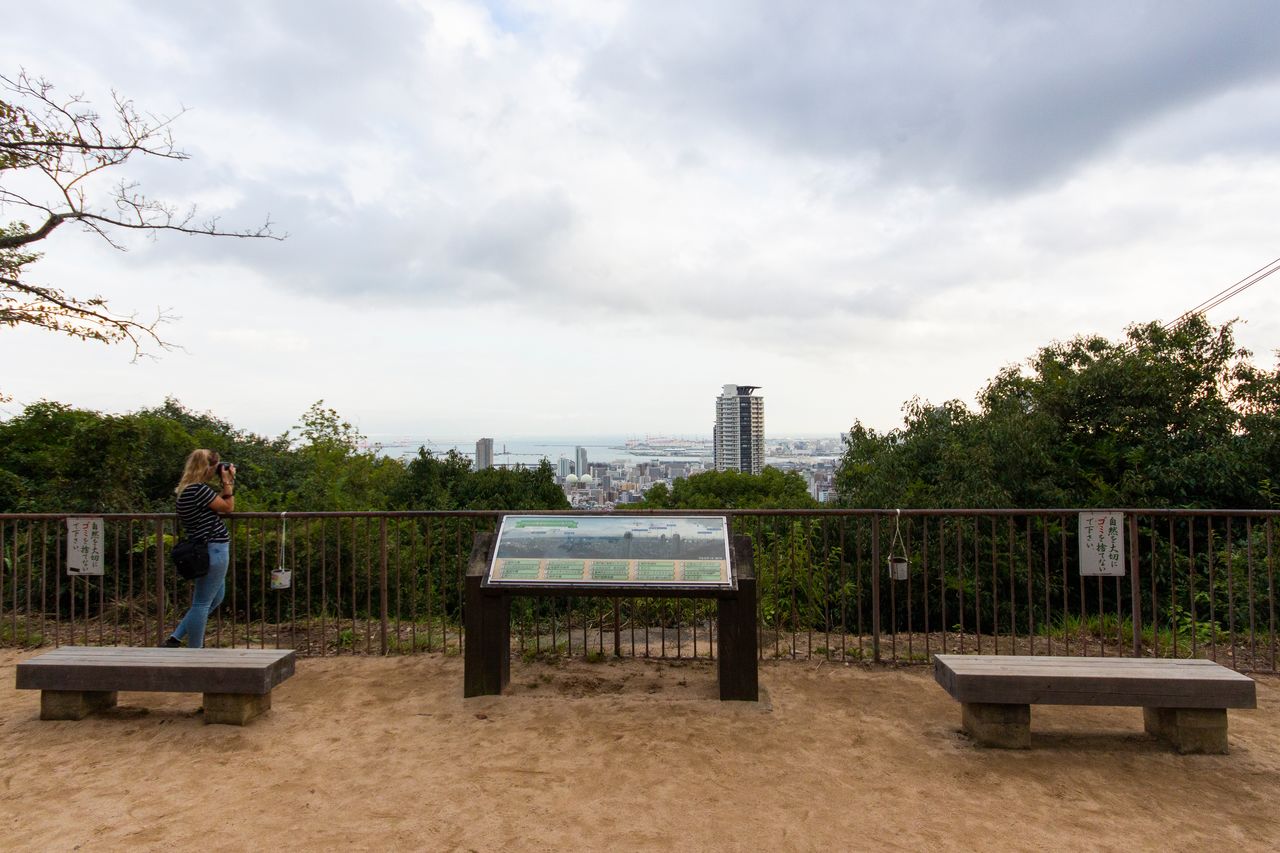 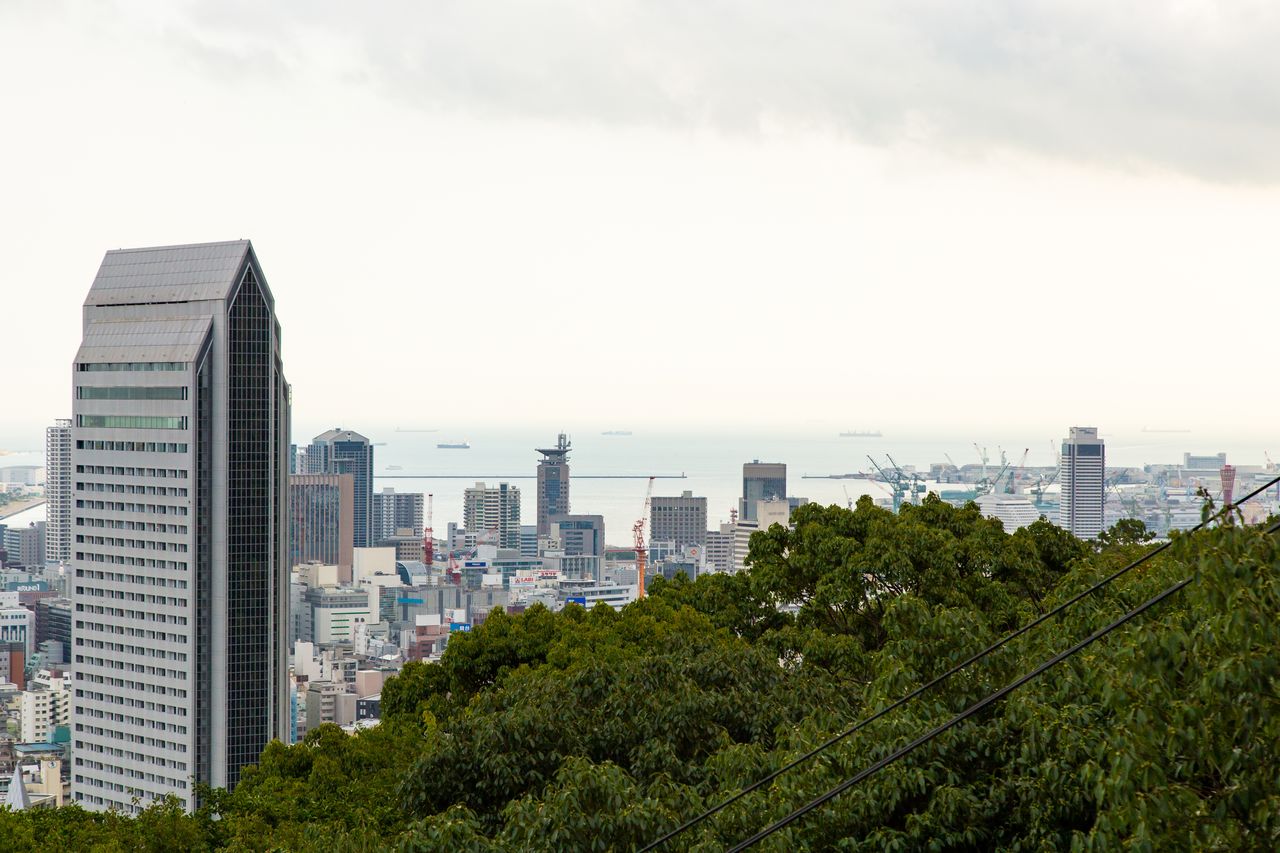 The lookout displays signs about the daily radio calisthenics sessions. There is also a hut where climbers can sign the visitors’ book. Many Kobeites who live at the foot of the mountain get their exercise by climbing up here every morning to stretch to music. In fact, one woman who has been attending radio calisthenics here for decades now is about to notch up her 20,000th visit!

The Ontaki teahouse offers a set breakfast with ham and eggs that would not be out of place in a downtown café, attesting to the fact that hiking really is part of life in Kobe. In fact, much of the city’s population lives near similar hiking courses, and, in a phenomenon unusual in Japanese cities, on fine mornings, many residents get up a little early so they can go climbing in the hills. After they have done a bit of exercise, they then have coffee or breakfast surrounded by nature before going off to work. This is a luxury unique to Kobe, a city blessed by the imposing Rokkō range and the recipient of a hiking culture imported by the residents of the city’s foreign quarter. 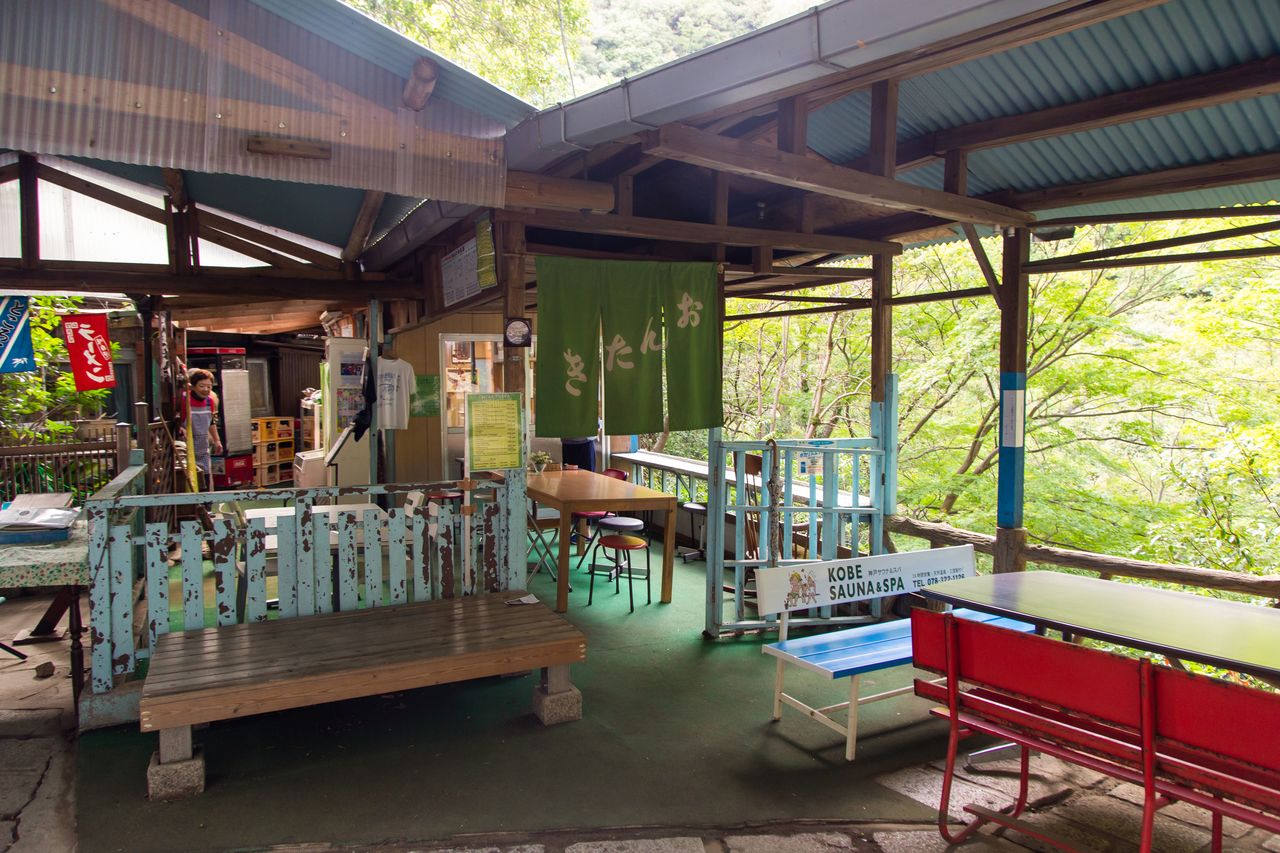 Patrons at the Ontaki teahouse, established in 1915, may be seen sipping on a beer while enjoying the view of the waterfall. 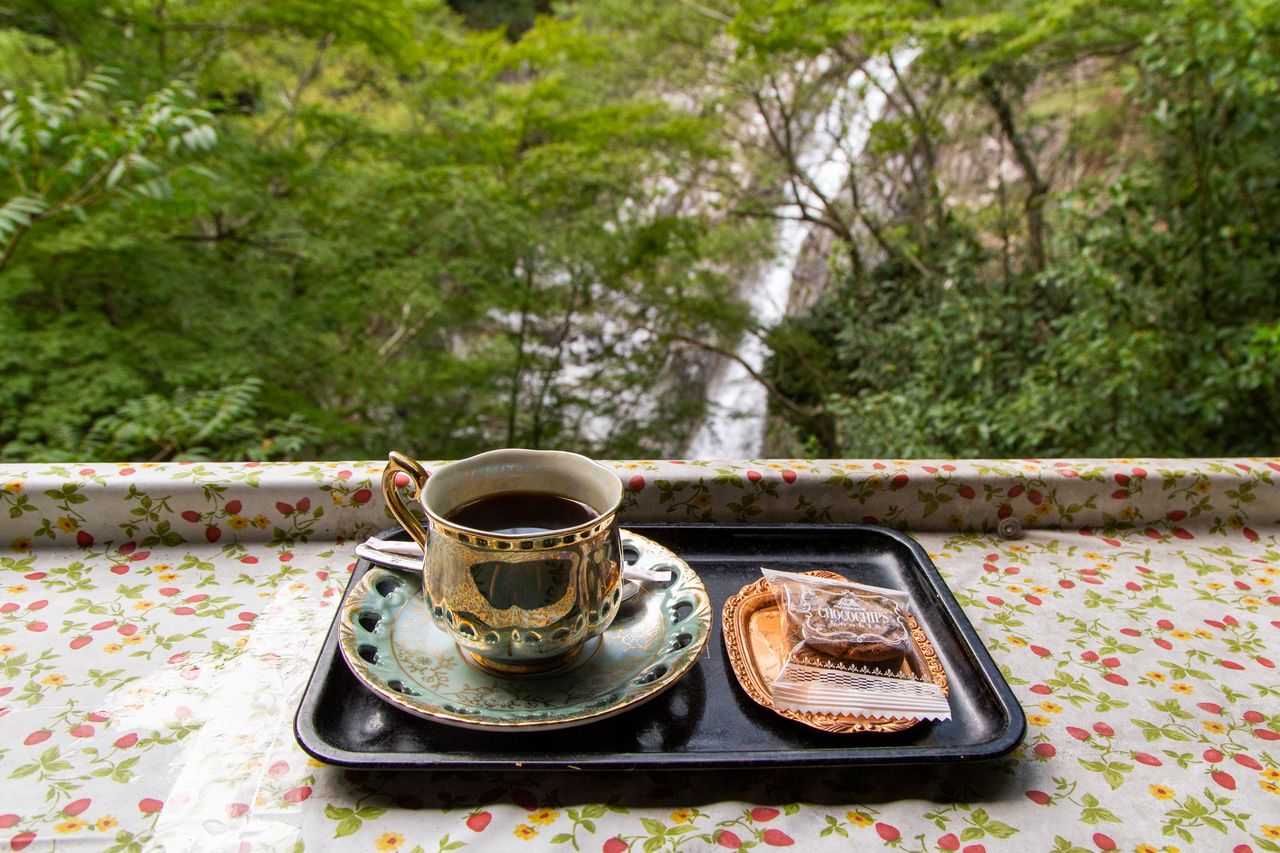 Nothing beats escaping from the hustle and bustle of the city to enjoy a coffee while listening to the sounds of the waterfall.

Fifteen minutes along the hiking trail, we get to the Nunobiki Gohonmatsu Dam, one highly prized by history buffs and dam enthusiasts alike. Constructed in 1900, it is Japan’s first concrete gravity dam, and forms a central part of the historical Nunobiki waterworks, designated as an important cultural property.

The reservoir behind the dam holds 600,000 cubic meters of the Nunobiki water that was so highly prized by sailors aboard foreign ships in olden times. Filtered through the granite of Mount Rokkō, the mineral-rich water was known to retain its flavor throughout lengthy sea voyages.

If you have time on your hands at Shin-Kobe Station, the Nunobiki Falls is a must see! 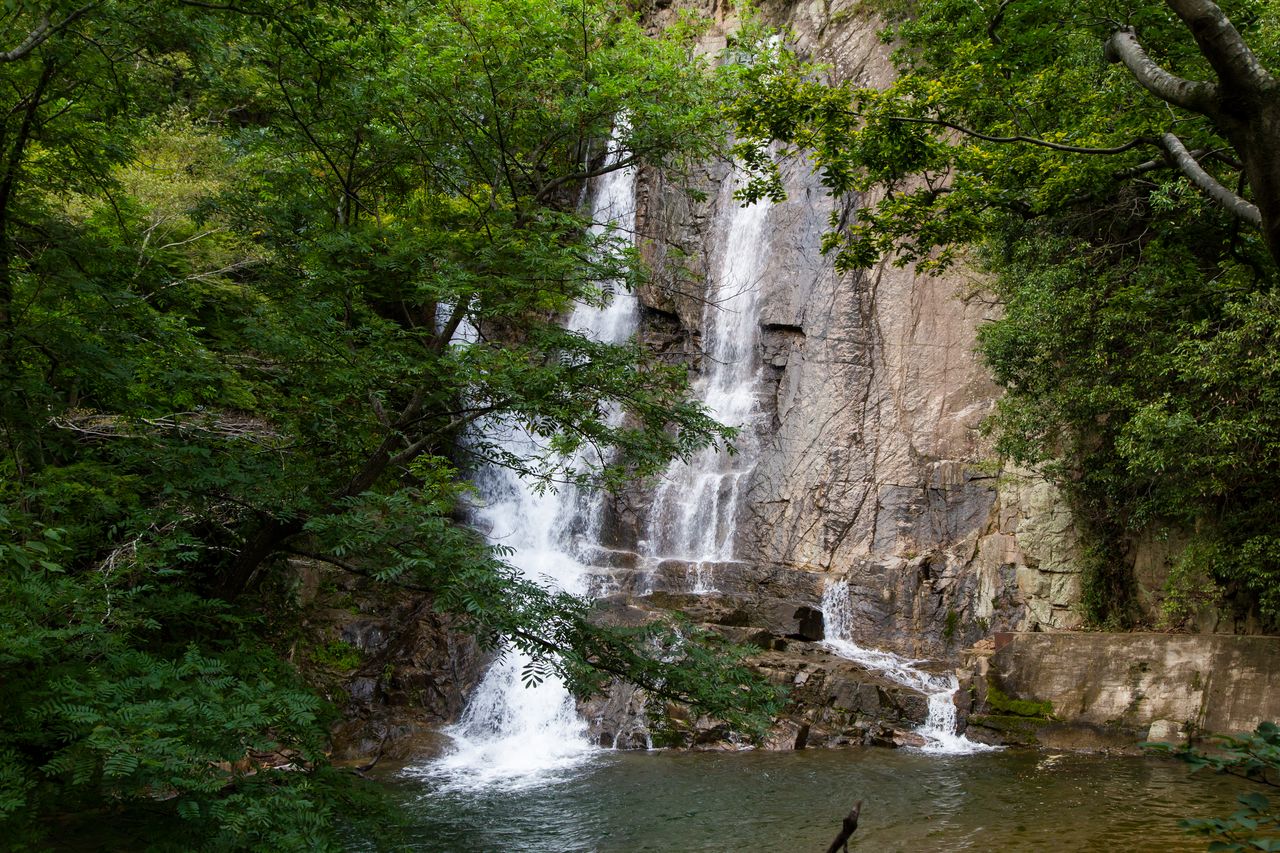 The Gohonmatsu Kakuredaki, or “hidden falls,” appear only when the reservoir level is high enough to open up the dam’s spillway. 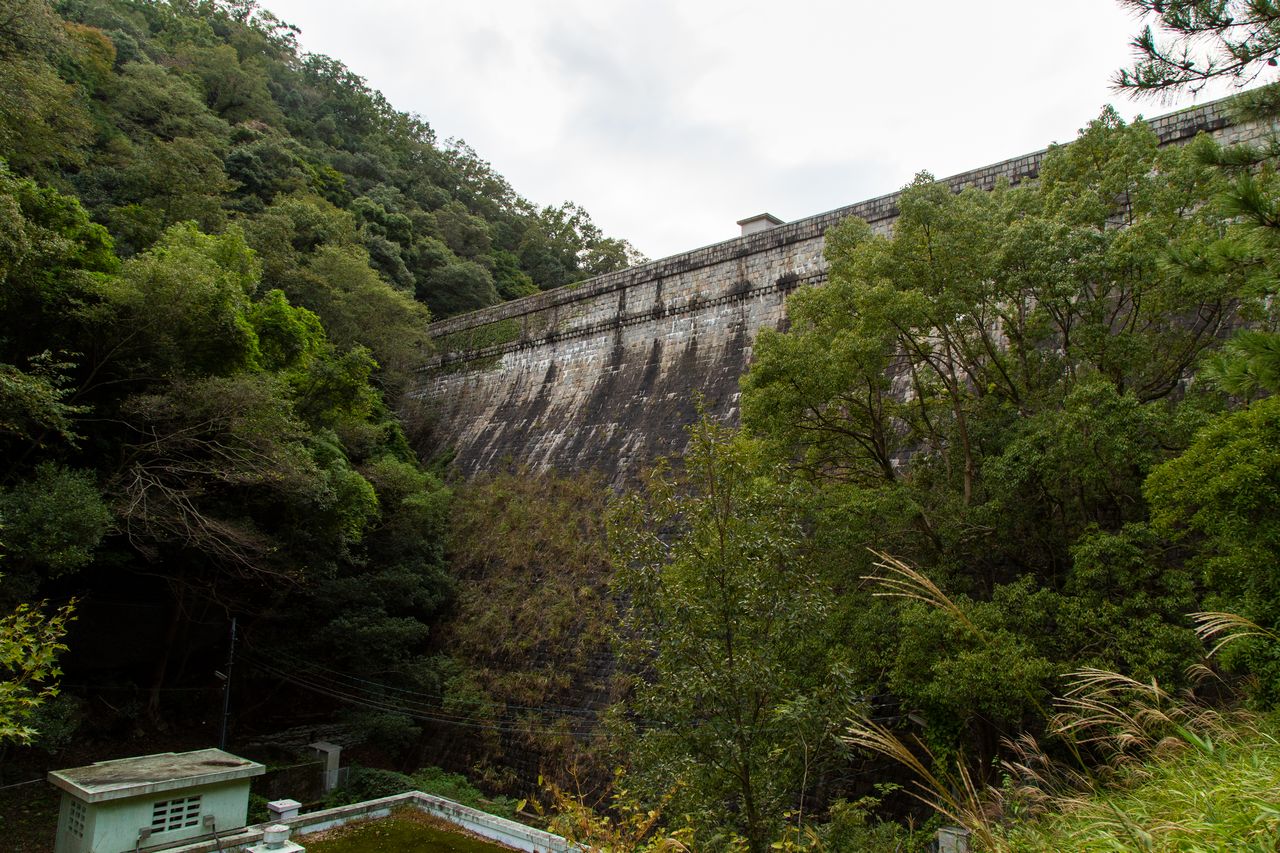 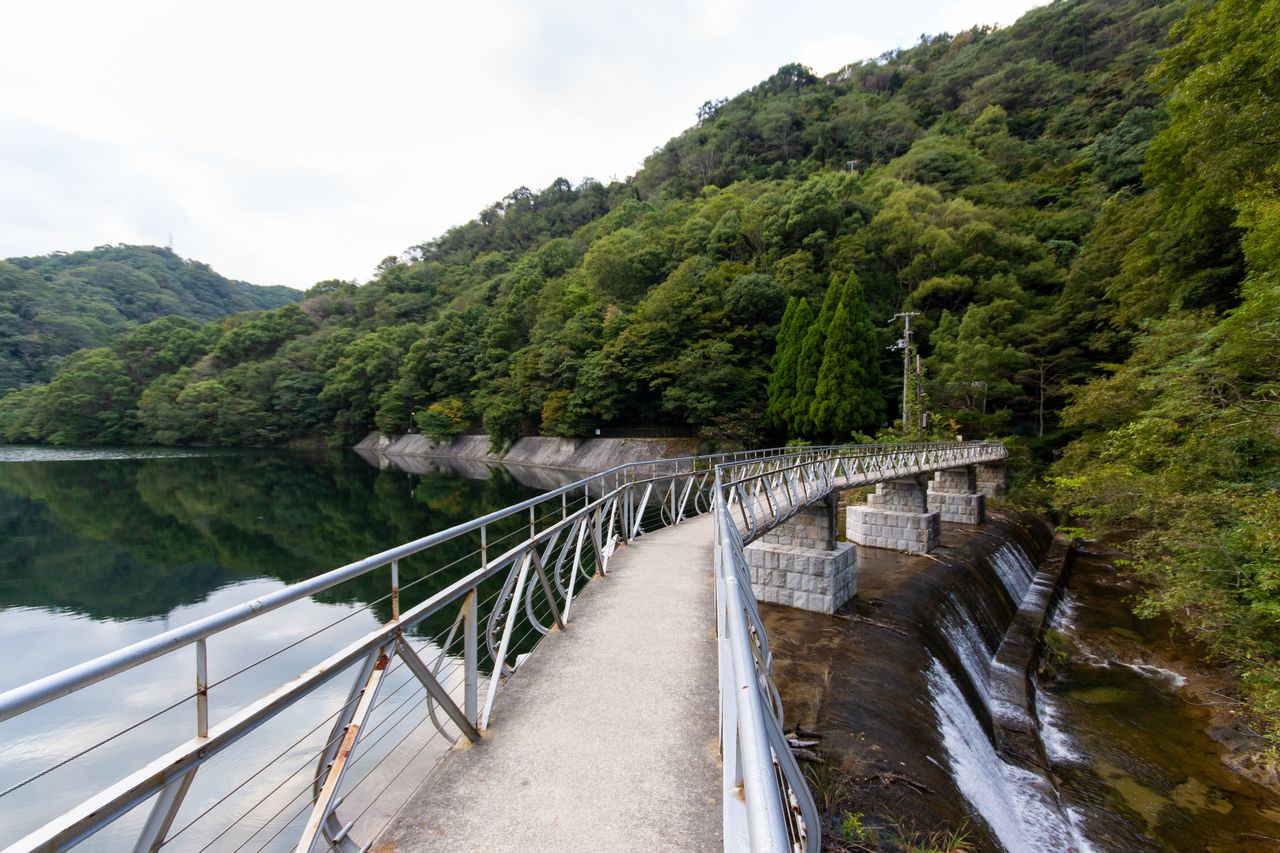 The walking trail continues well beyond the Nunobiki reservoir and is good for bird spotting.