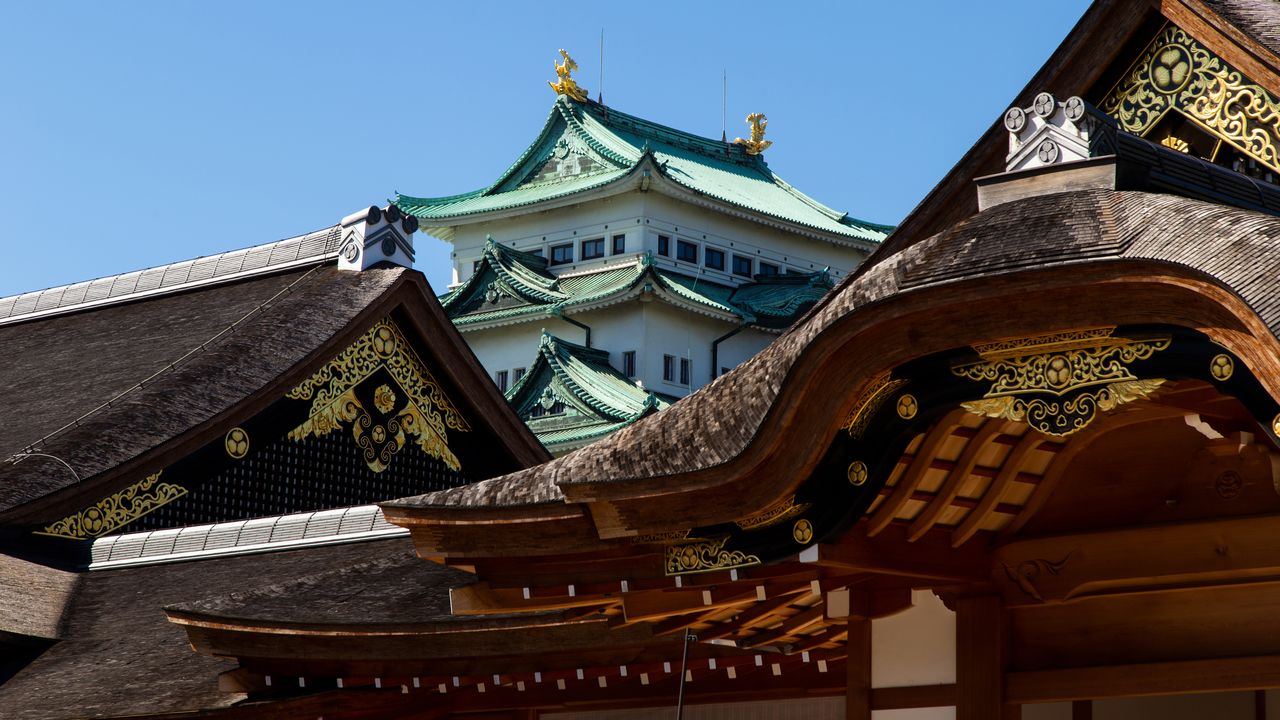 Travel Nov 21, 2019
Nagoya Castle was built as the base for the Owari-Tokugawa clan to guard the region between Edo and Osaka. The meticulously reconstructed Honmaru Palace was first opened to the public in 2018. The interior of the keep has been praised as an authentic reproduction of early modern Japanese castle construction. The main tower will undergo reconstruction in timber, so now is a great opportunity to view it together with Honmaru Palace.

Nagoya Castle is known for the golden shachihoko “tiger-fish” ornaments that adorn the main tower. The town surrounding the castle grew to become the largest city in Japan’s Chūbu region, now home to over 2 million people. Nagoya’s residents are proud of their castle, which was built in 1612 as a key stronghold for the Edo-based shogunate. 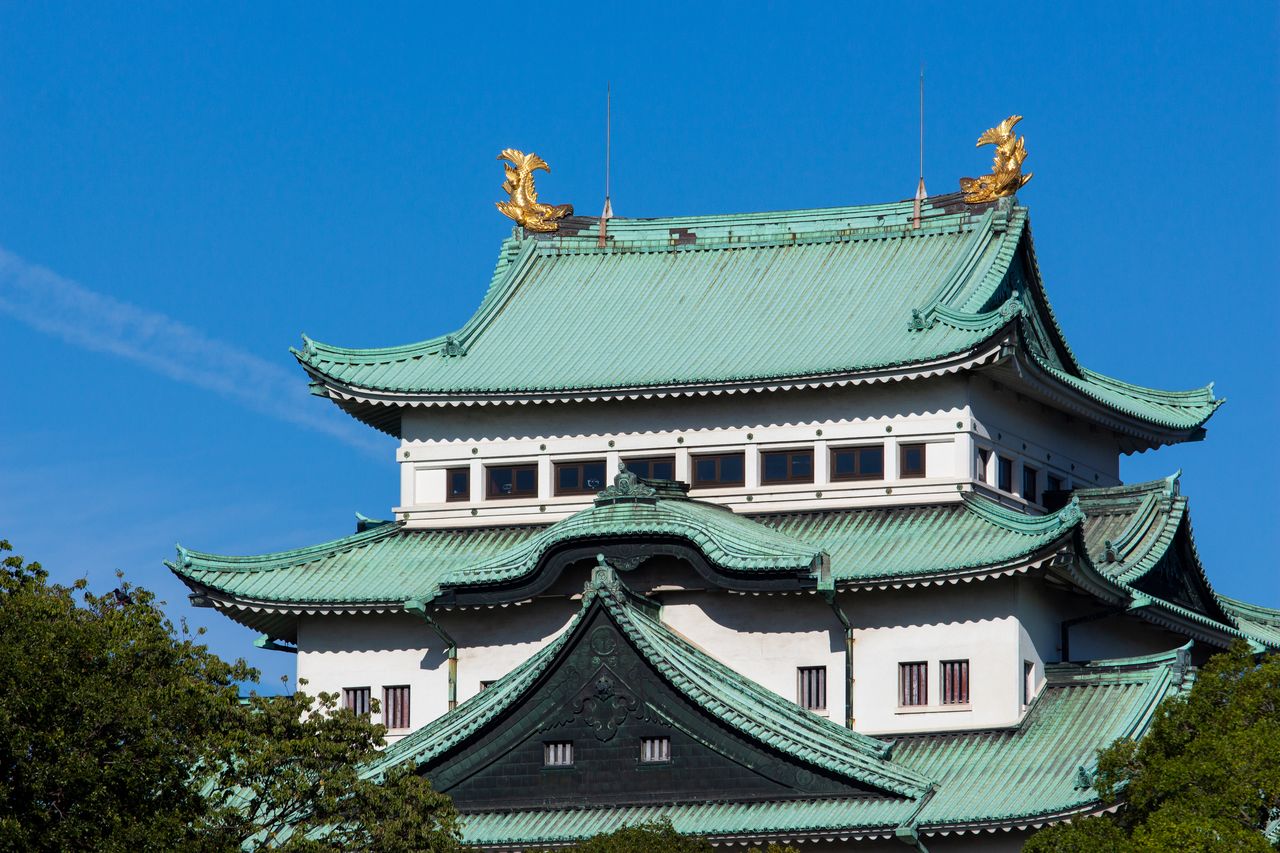 Golden shachihoko (tiger-fish), the symbol of Nagoya Castle, soar majestically above its main tower. The male shachihoko is to the north (left) and the female is on the south.

Tokugawa Ieyasu ordered the construction of Nagoya Castle in 1609, following the defeat of Toyotomi Hideyoshi in the Battle of Sekigahara. This was prior to the Siege of Osaka (1614–15), when Hideyoshi’s son Hideyori still resided at Osaka Castle. The Tokugawa clan believed that a stronghold was needed in Owari (the west of modern-day Aichi Prefecture) to defend the midpoint of the Tōkaidō route, which linked the shogunate’s base in Edo with the Kyoto-Osaka region.

Prior to this, Kiyosu Castle (in what is now Kiyosu, Aichi) was the seat of power in Owari, but it was prone to flooding because it was situated on low-lying land adjacent to a river, and it suffered from weak foundations. The Atsuta plateau was the site chosen to construct a new castle. This was where the powerful daimyo and warlord Oda Nobunaga (1534–82) had a castle in his younger years. 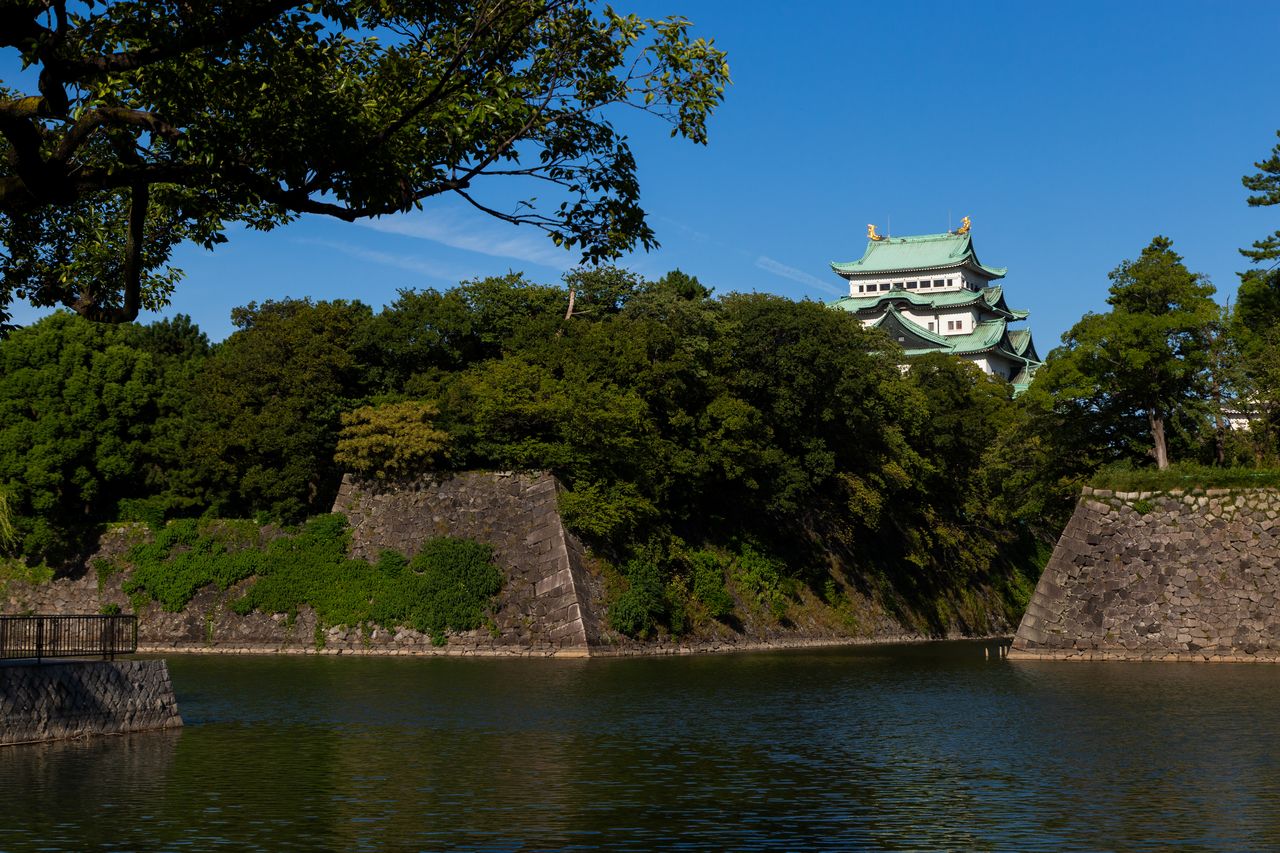 The view of Nagoya Castle’s tower from the moat on the western side.

Construction commenced in 1610 by mobilization of feudal rulers across Japan. The project was a test of the loyalty of non-Tokugawa daimyō, and was simultaneously intended to sap their finances. For example, the responsibility for construction of the expensive stonework was foisted upon western daimyō who had previously been loyal to the Toyotomi clan. Katō Kiyomasa of the Kumamoto clan (1562–1611), known as an expert castle builder, volunteered to oversee construction of the important stone walls for the keep, and famously completed the job in just three months. 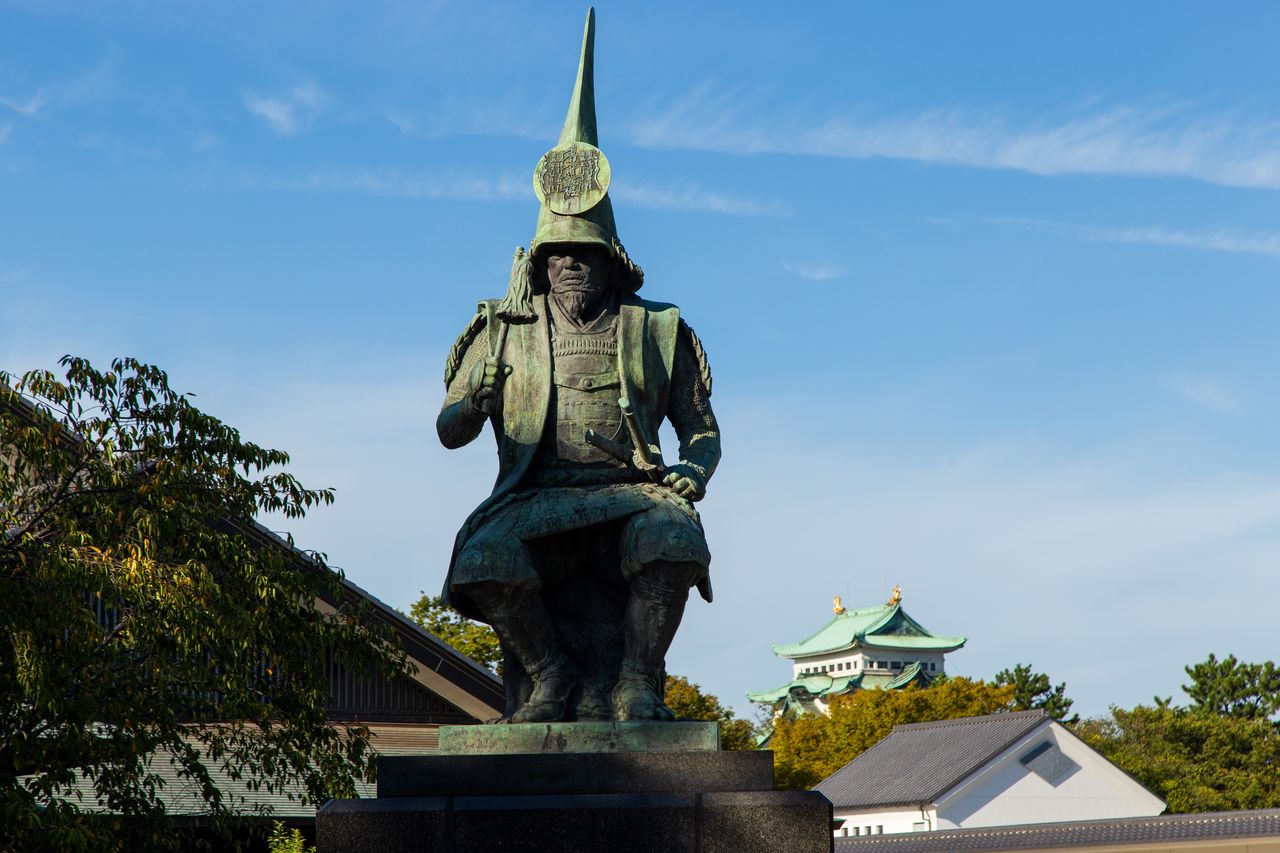 Tokugawa Yoshinao (1601–50), the ninth son of Tokugawa Ieyasu, was put in charge of the castle, thus founding the Owari-Tokugawa house. The fact that Nagoya Castle was the residence of the head of the Three Houses of the Tokugawa indicates how critical the location was in the eyes of the Edo shogunate. The five-story keep tower was adorned with shachihoko made from pure gold as an expression of the power of the Tokugawa clan. No expense was spared in construction of the ornate Honmaru Palace, completed in 1615, which was the residence of the domain’s chief as well as the domain headquarters.

A castle town was established with a grid layout, and the entire town of Kiyosu, including its samurai, craftsfolk, merchants, temples, and shrines, was relocated here, to create the lively city of Nagoya. 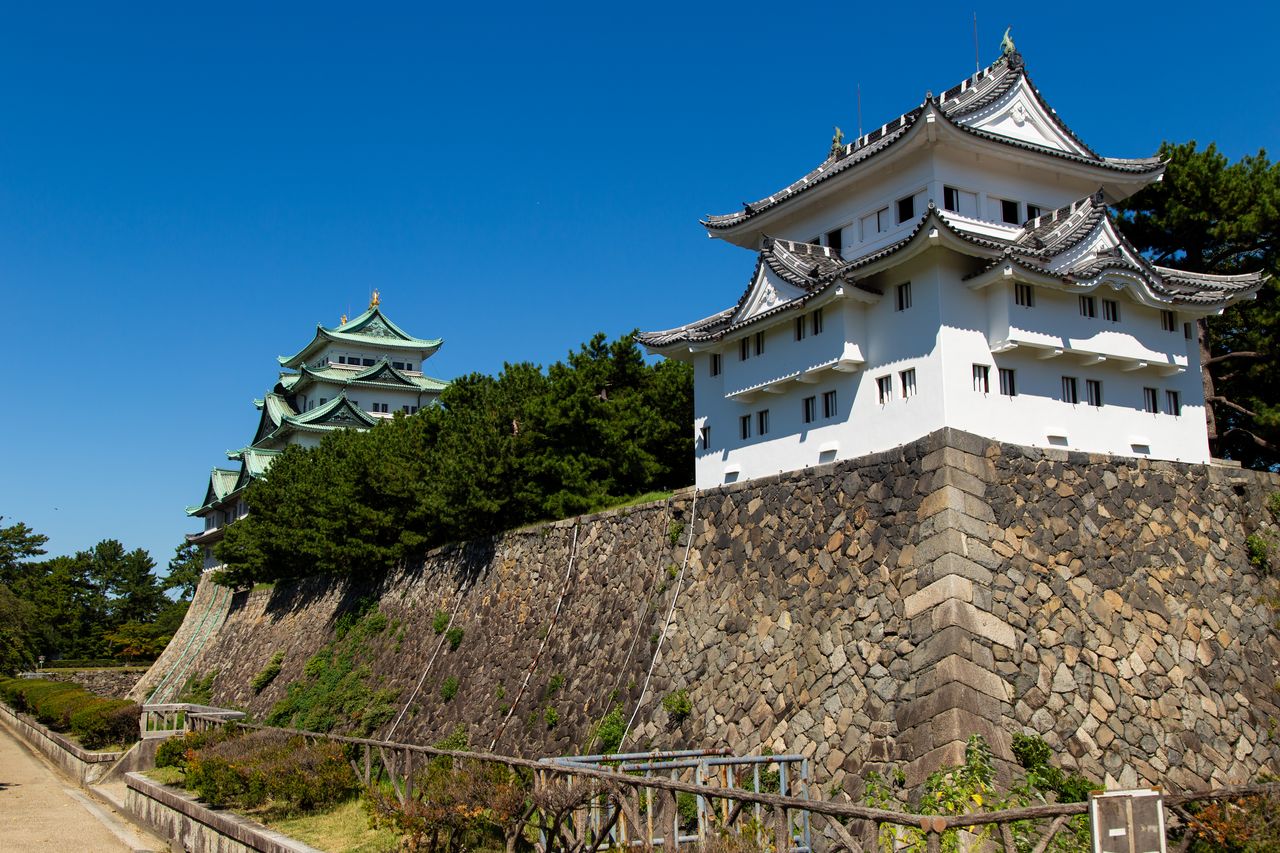 The Seinan-sumi Yagura (Southwest Corner Watchtower) with the main tower keep in the background. Non-Tokugawa daimyō were responsible for construction of the stone walls.

The castle was used briefly by the army in the early Meiji era (1868–1912), after which a decision was taken to preserve the structure. It was transferred to the Imperial Household Ministry to become Nagoya Detached Palace, an imperial villa. Early in the Shōwa era (1926–89), the castle was designated a national treasure and was gifted to the City of Nagoya, after which the grounds were opened to the public. Unfortunately, the main tower keep and palace were destroyed by fires in May 1945 during the World War II aerial bombardment of Nagoya.

Nevertheless, the watchtower, gate, and stonewalls, which survived the fires, were reopened to the public immediately after the war. In 1952, Nagoya Castle was designated a Special National Historic Site. The present-day steel-framed, reinforced concrete castle keep was completed in 1959, thanks to generous donations, particularly from Nagoya residents. The exterior was a faithful reproduction of the prewar structure, based on original plans, and the famous golden shachihoko were re-created. The five-level, seven-floor tower is a popular tourist attraction, with an observation deck and a museum displaying historical materials and models. 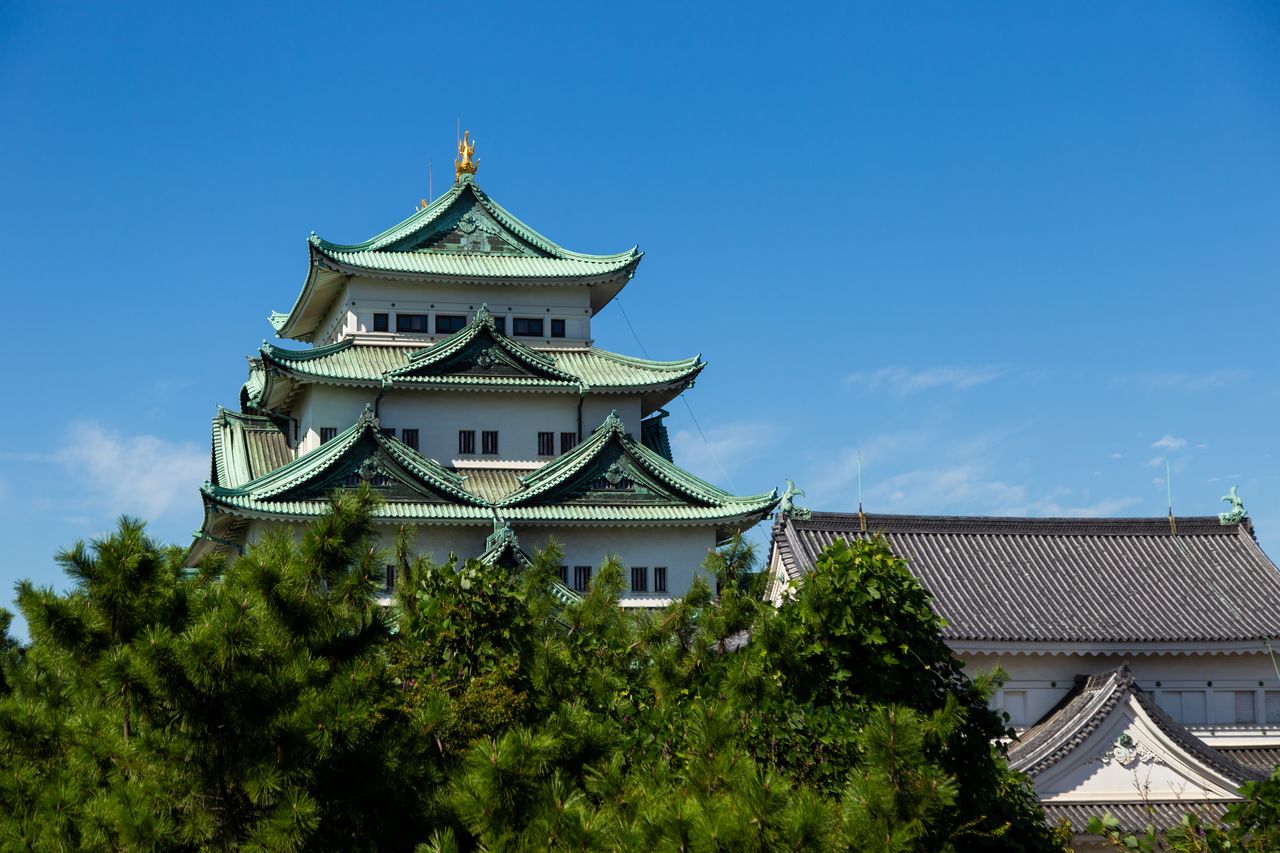 The large and small towers seen from the window of the Seinan-sumi Yagura.

The main keep was closed to the public due to aging and poor earthquake resistance, but plans are underway to rebuild it in timber. The Honmaru Palace reconstruction was completed in 2018, returning the site’s appearance to its former state for the first time in over 70 years. During the reconstruction work, the tower keep and Honmaru Palace will be inaccessible to visitors, but now is a golden opportunity to visit the castle. 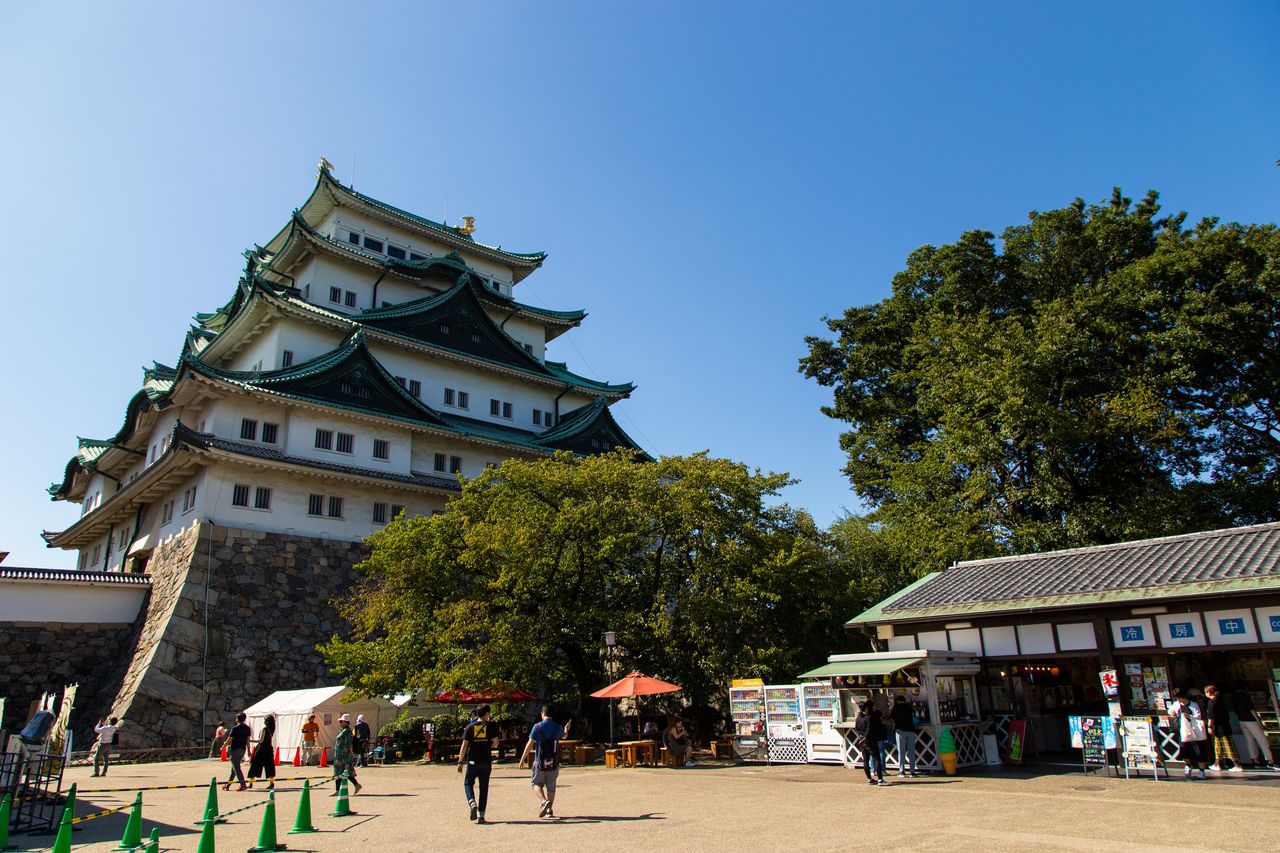 Take this opportunity to visit the site for a last look at the current keep.

The Re-created Splendor of Honmaru Palace

Honmaru Palace was opened to the public in June 2018. The expensive reconstruction took some 10 years, incorporating around 2,000 original foundation stones, with great effort made to refer to original plans and old photos, and including the Omote Shōin, the official administrative offices of the domain lord. 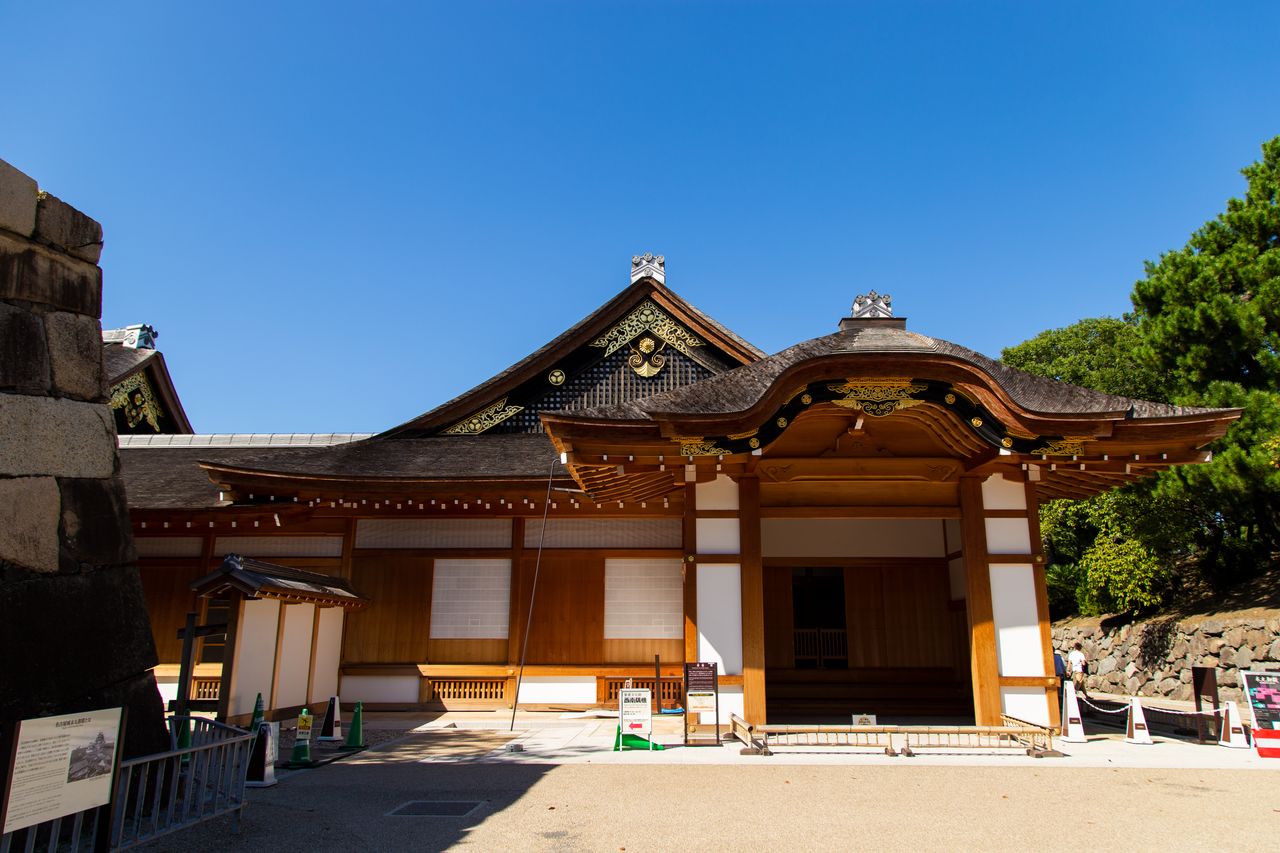 Entrance to the Honmaru Palace. The attractively decorated cusped porch gables are in a Chinese style. 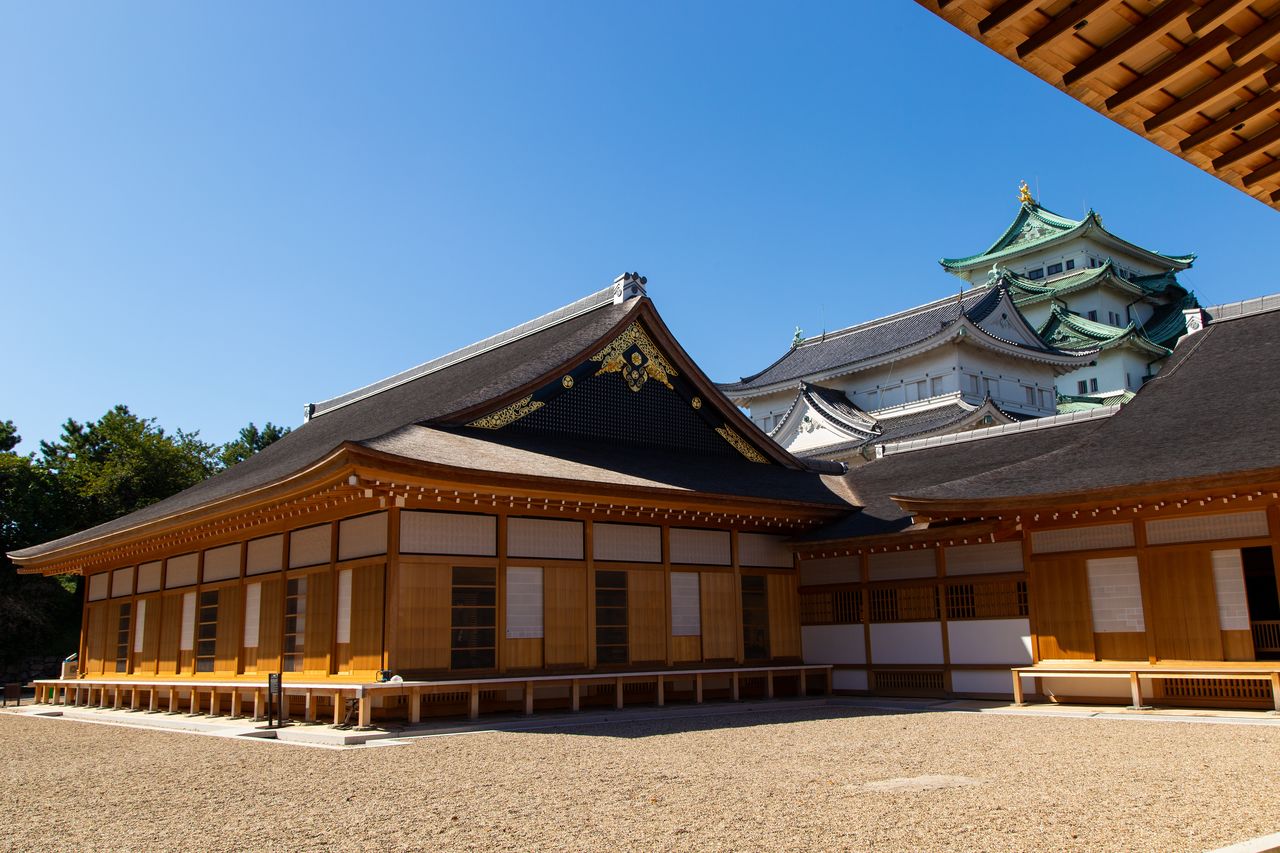 The Jōrakuden (shogun’s quarters), built by Tokugawa Iemitsu, the third Tokugawa shogun. The large and small towers are visible to the rear. The elegant roof of the palace is finished with fine timber shingles.

Yoshinao, the first feudal lord stationed here by the Tokugawa clan, moved into Ninomaru Palace, a new structure on the grounds, just five years after completion of the Honmaru Palace. After Hidetada, the second Tokugawa shōgun, stayed here en route to Kyoto, it was designated as a palace for exclusive use of the shōgun. The interior was lavishly decorated with wall paintings by famous artists including Kanō Sadanobu and Kanō Tan’yū, and had gold fixtures, but was only used on a few occasions.

During World War II, many wall paintings were removed for safe-keeping, and over 1,000 of them have been designated as National Treasures. Those seen today in the Honmaru Palace are faithful reproductions based on analysis of everything from the paper quality to the pigments of the originals. Master craftspeople went to great lengths to recreate the opulence of the residence, and the result is breathtaking. 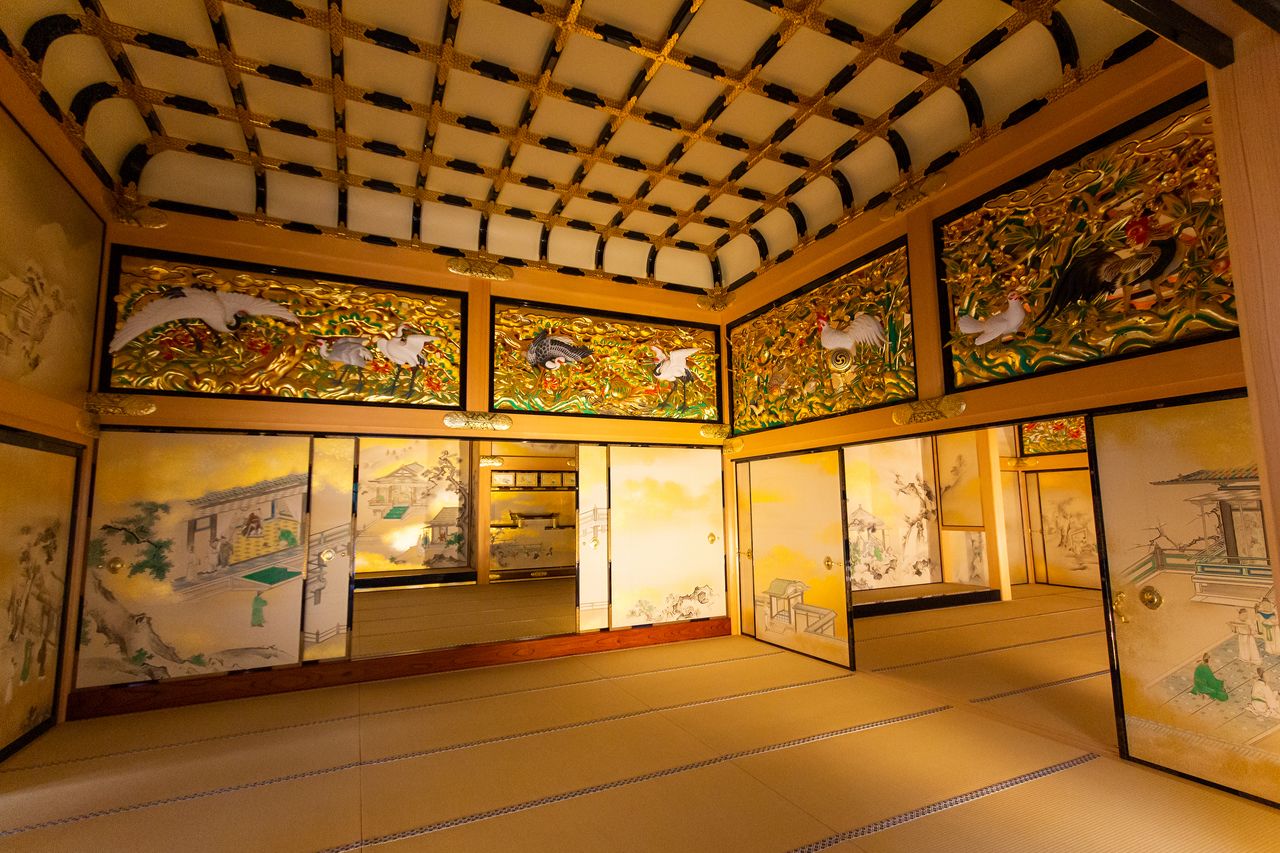 The Jōrakuden. The interior room to the left was Iemitsu’s, decorated with wall paintings by Kanō Tan’yū and gaily colored crosspieces. 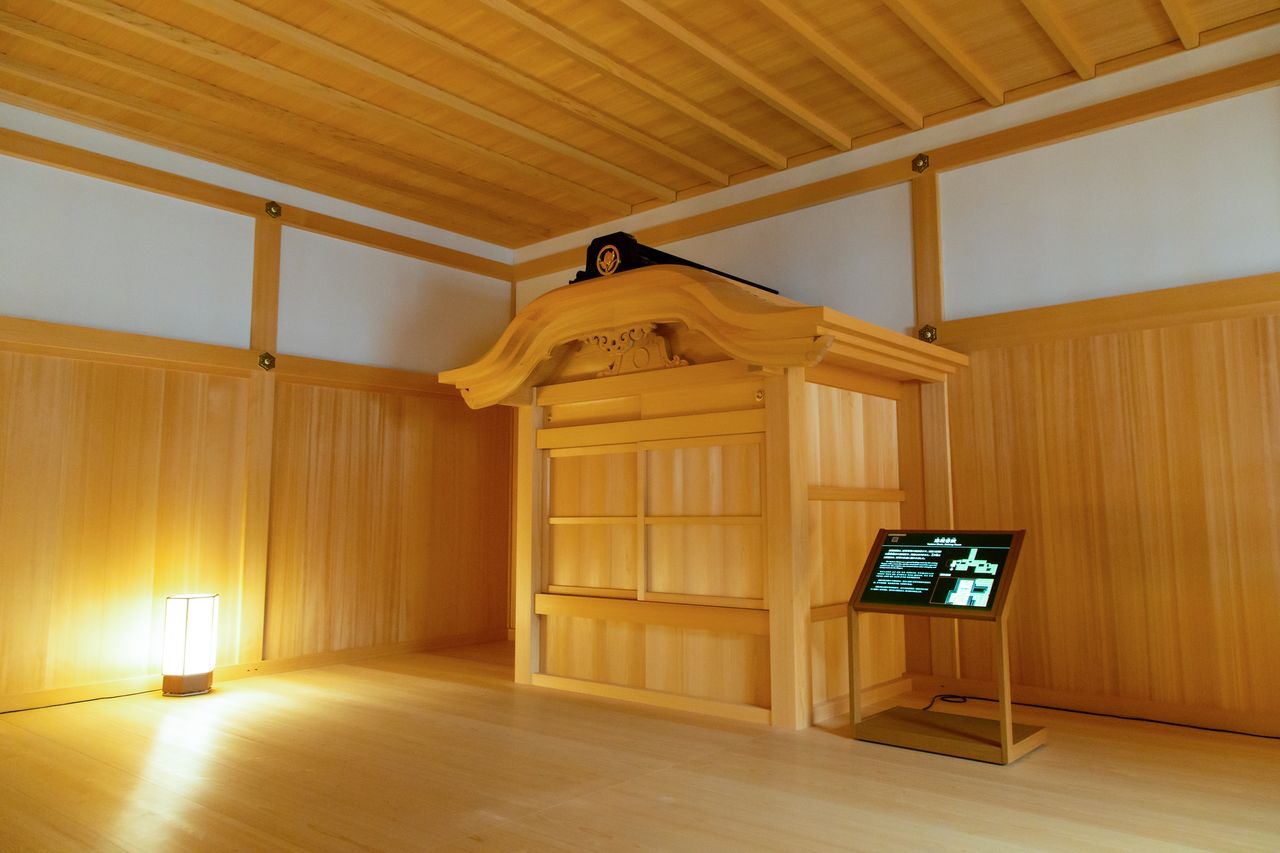 The Yudono Shoin (shogun’s bathing room). This was a steam bath not outfitted with a bathtub.

Prewar Remnants: The Watchtowers and Gate

Three watchtowers are in their original condition, and all have been designated as Important Cultural Properties. The inside of the Seinan-sumi Yagura (Southwest Corner Watchtower) is permanently open to the public and is highly recommended for visitors. It offers close-up views of the large and small towers from the windows on the top floor, as well as of the high-rise buildings around Nagoya Station in the other direction. It was restored during the Taishō era (1912–26) while under the Imperial Household Ministry’s jurisdiction, and the imperial chrysanthemum crest was therefore used on the ridge-end tiles. 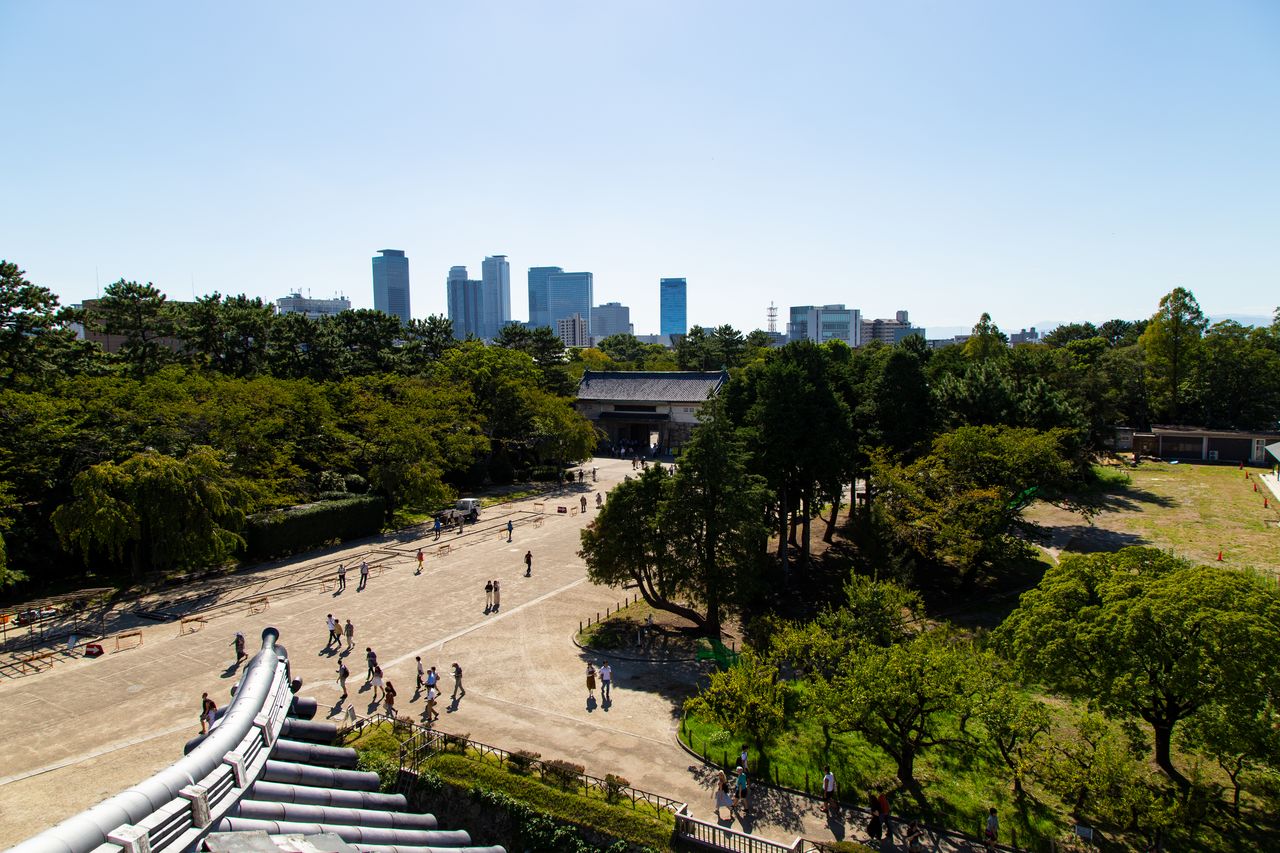 View of downtown Nagoya from the Seinan-sumi Yagura. 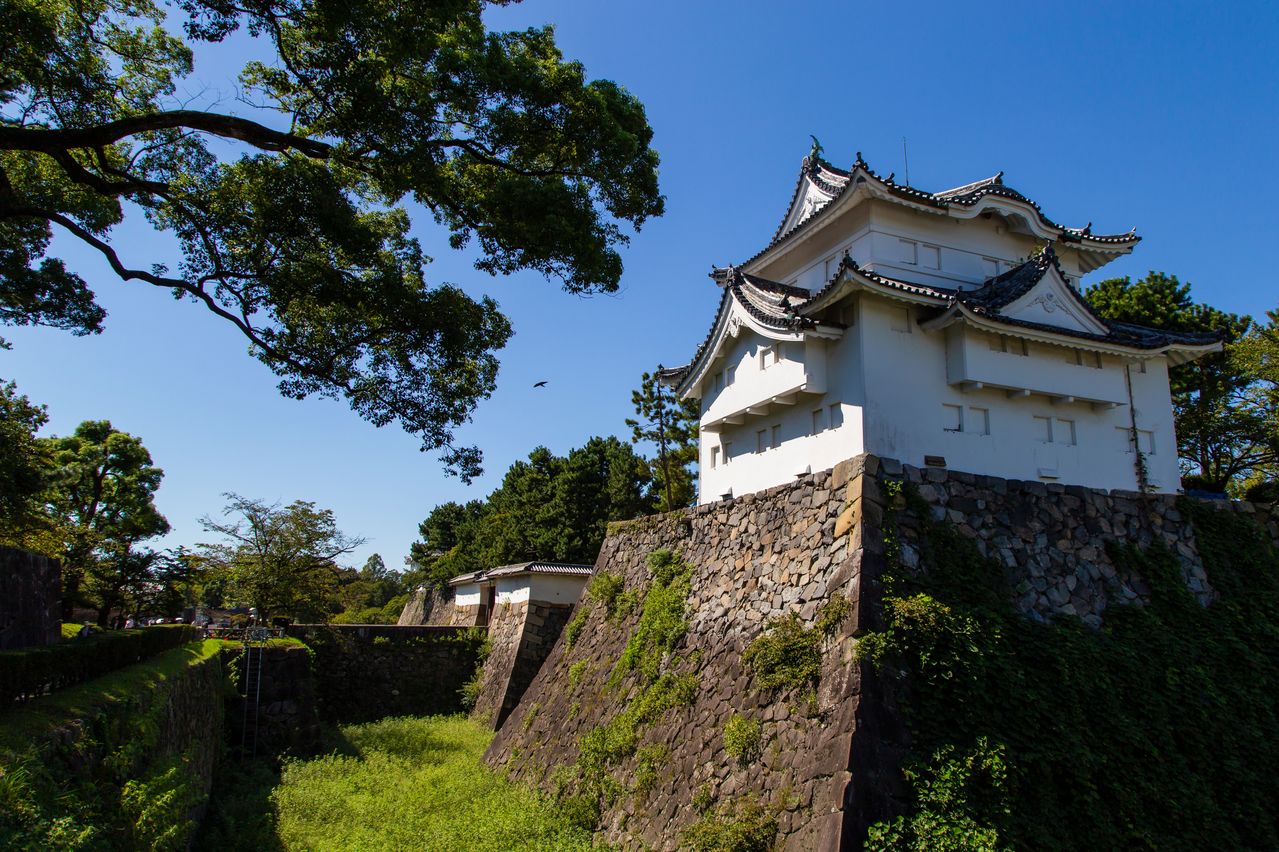 The Tōnan-sumi Yagura was built around 1612, at the same time as the Seinan-sumi Yagura. The Omote Ni-no-mon (Second Front Gate) is on the left. 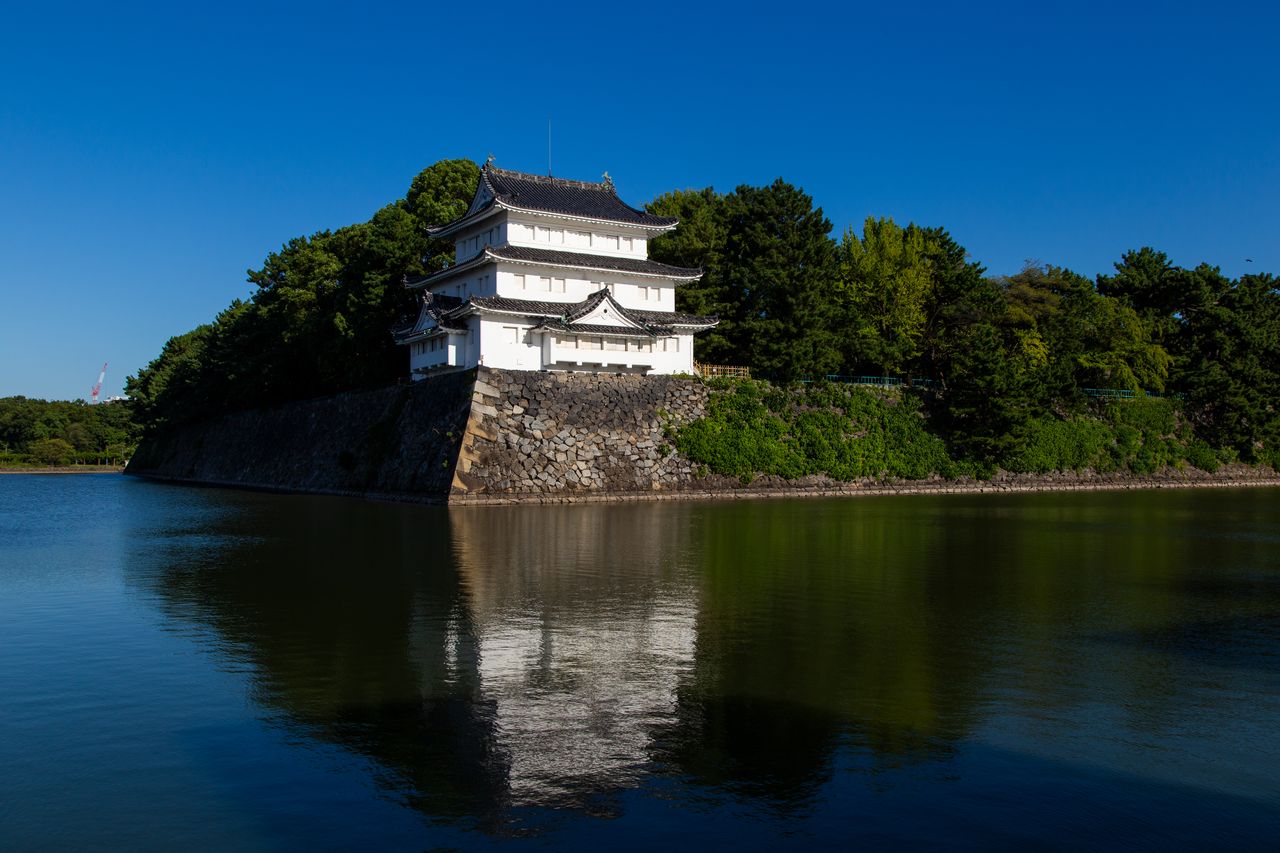 The Seihoku-sumi Yagura (ca. 1619) viewed from across the outer moat.

A further three gateways have been designated as National Treasures, with stone walls that date back to the original time of construction. The Ni-no-maru Garden is a nationally designated Scenic Site, planted with flowering trees such as plum, peony, and camellia, delighting visitors with each new season.

Guided castle tours are available without reservation and are highly recommended, before taking extra time to see parts of particular interest. The volunteer guides are well-informed about many aspects of Nagoya and are happy to share insights into local customs. Tours are available in English beginning at 1:00 in the afternoon from the tour guide signs at the Main and East Gates of the complex. 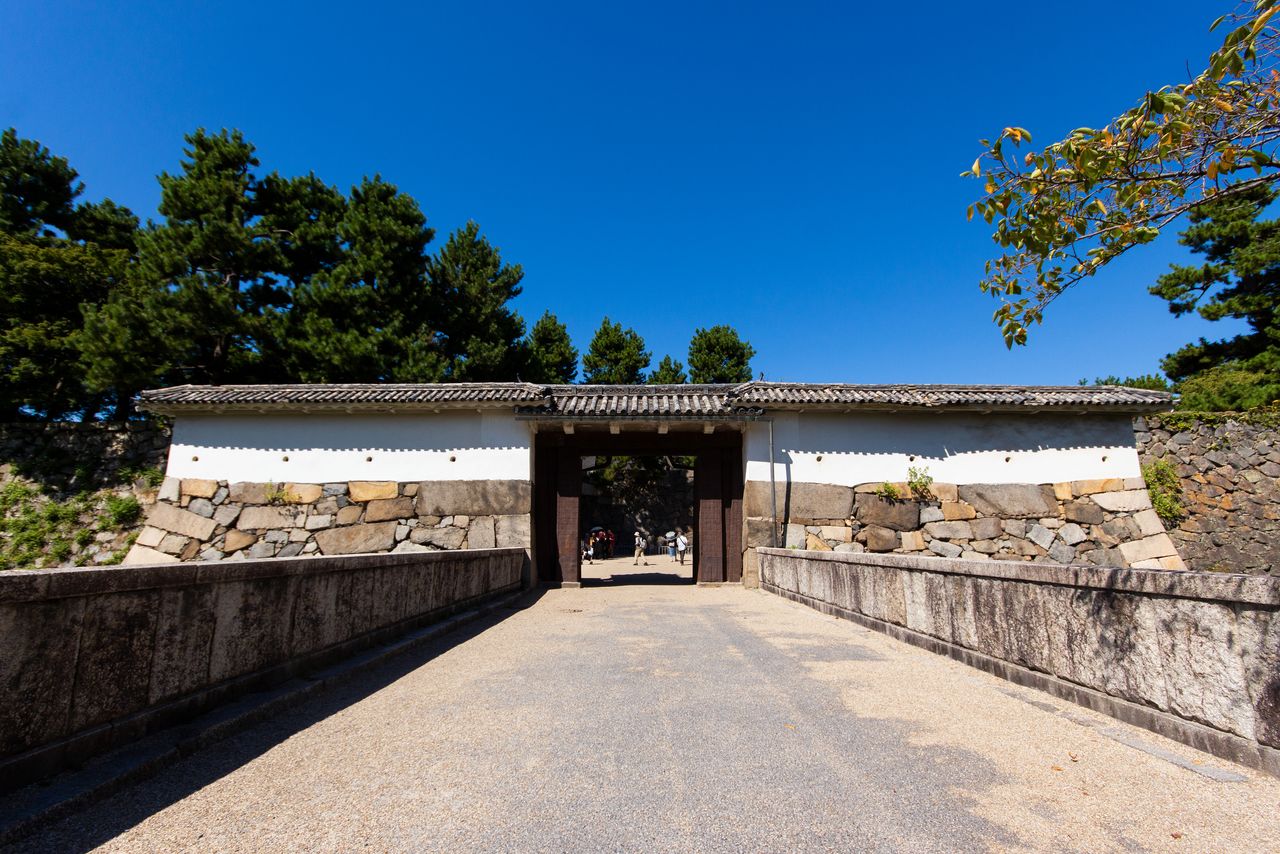 Omote Ni-no-mon, an Important Cultural Property, is south of the main keep. Embrasures (gun holes) are visible in the plastered walls each side of the gate. 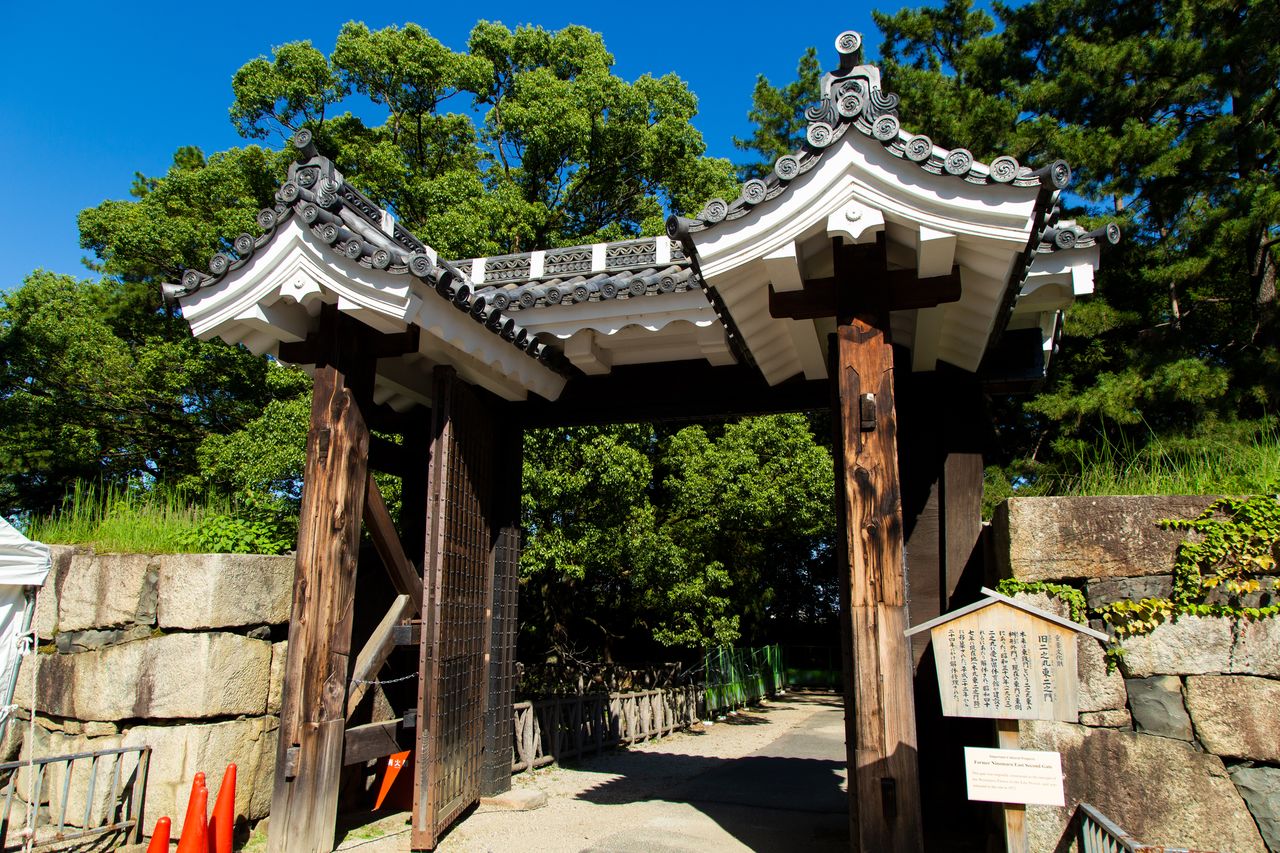 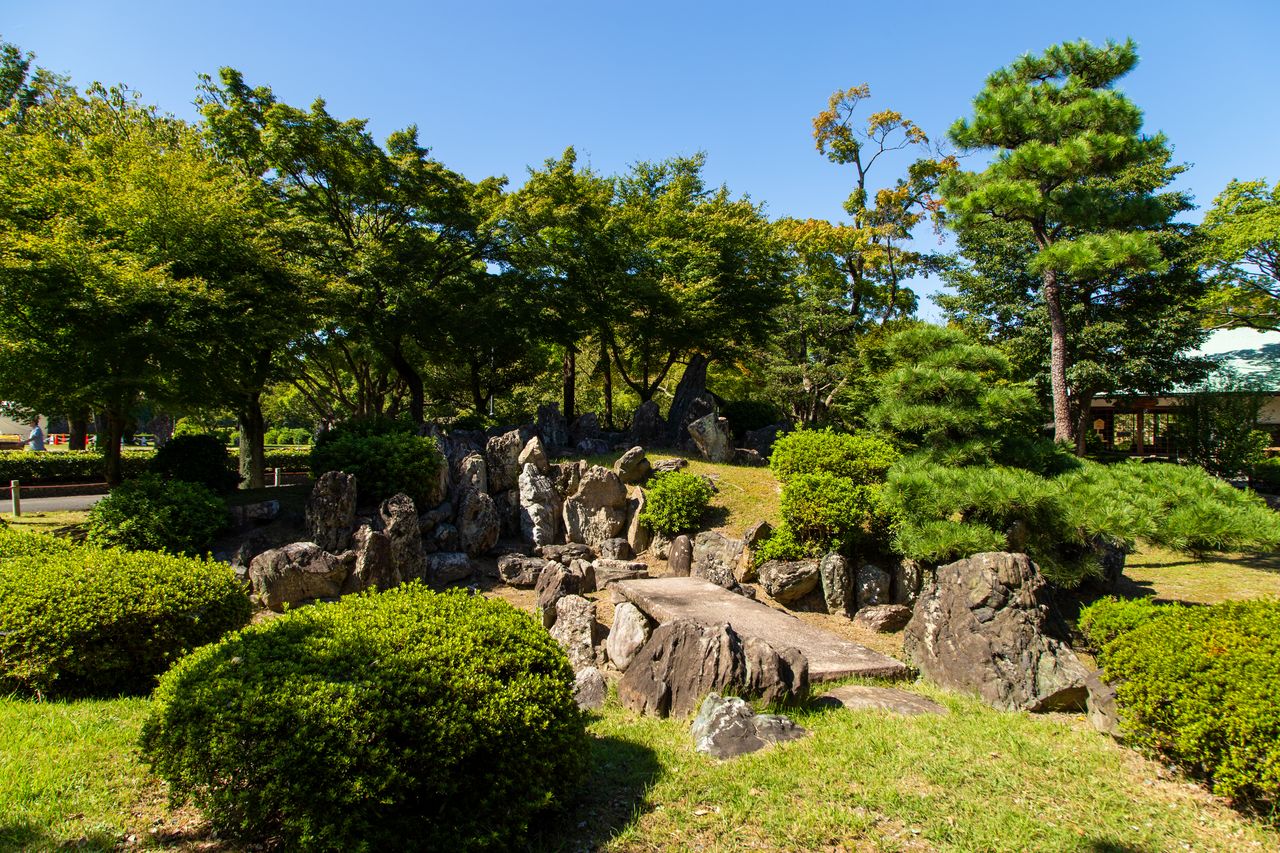 The Ni-no-maru Garden was the largest garden adjoining a lord's residence in Japan. Ruins of an earlier castle, where Oda Nobunaga lived until 1555, are in the south of the garden. 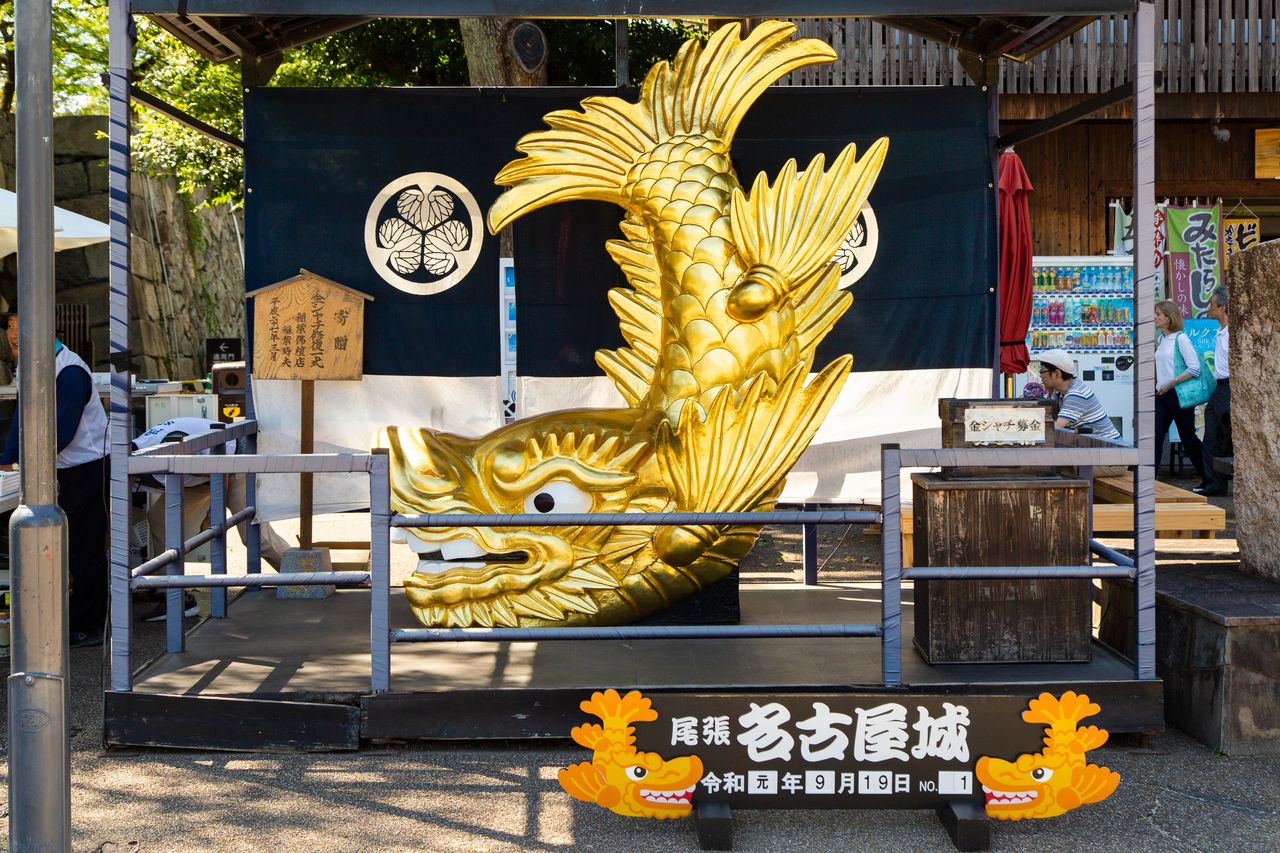 A golden shachihoko reproduction near the Main Gate is used for souvenir photos.

(Originally published in Japanese. Reporting and text by Nippon.com.)