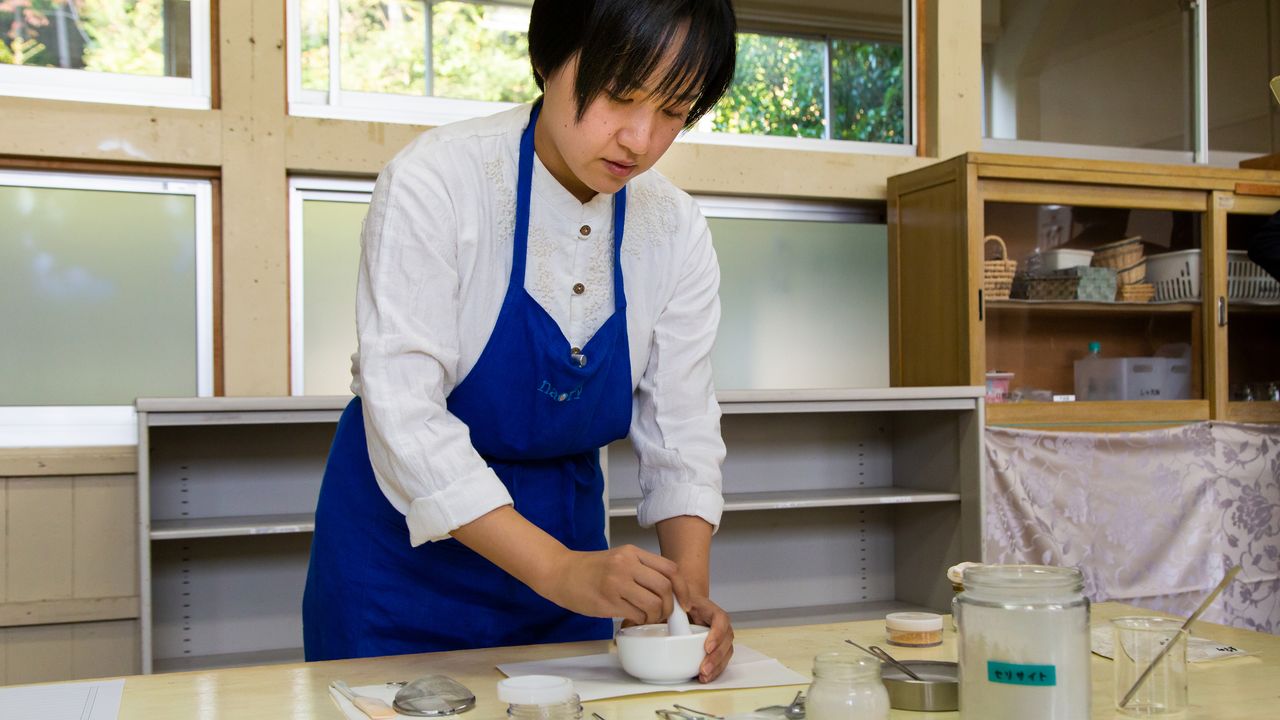 Tōei, Aichi: Handmade Cosmetics and Mine Tours Put the Town on the Map

Travel Lifestyle Nov 22, 2019
The town of Tōei, situated in Aichi’s lush Okumikawa region, is the only place in Japan that mines sericite, a mineral essential in cosmetics manufacture.

Tōei is a town situated in a mountain valley in northeastern Aichi Prefecture, near the border with Shizuoka. Ninety percent covered by natural forest, Tōeichō boasts mountains ranging up to 1,000 meters in height, and mountain streams whose clear waters are known for ayu (sweetfish) that was once declared Japan’s finest. For over 700 years, community residents in Tōei have held an annual flower festival to mark the Buddha’s birthday. The heritage-listed festival, which has been passed down from generation to generation, climaxes with the appearance of a demon, dressed in red from head to toe, who dances around waving a battleax to pray for health, safety, and good harvests, while cheered on by the crowd. 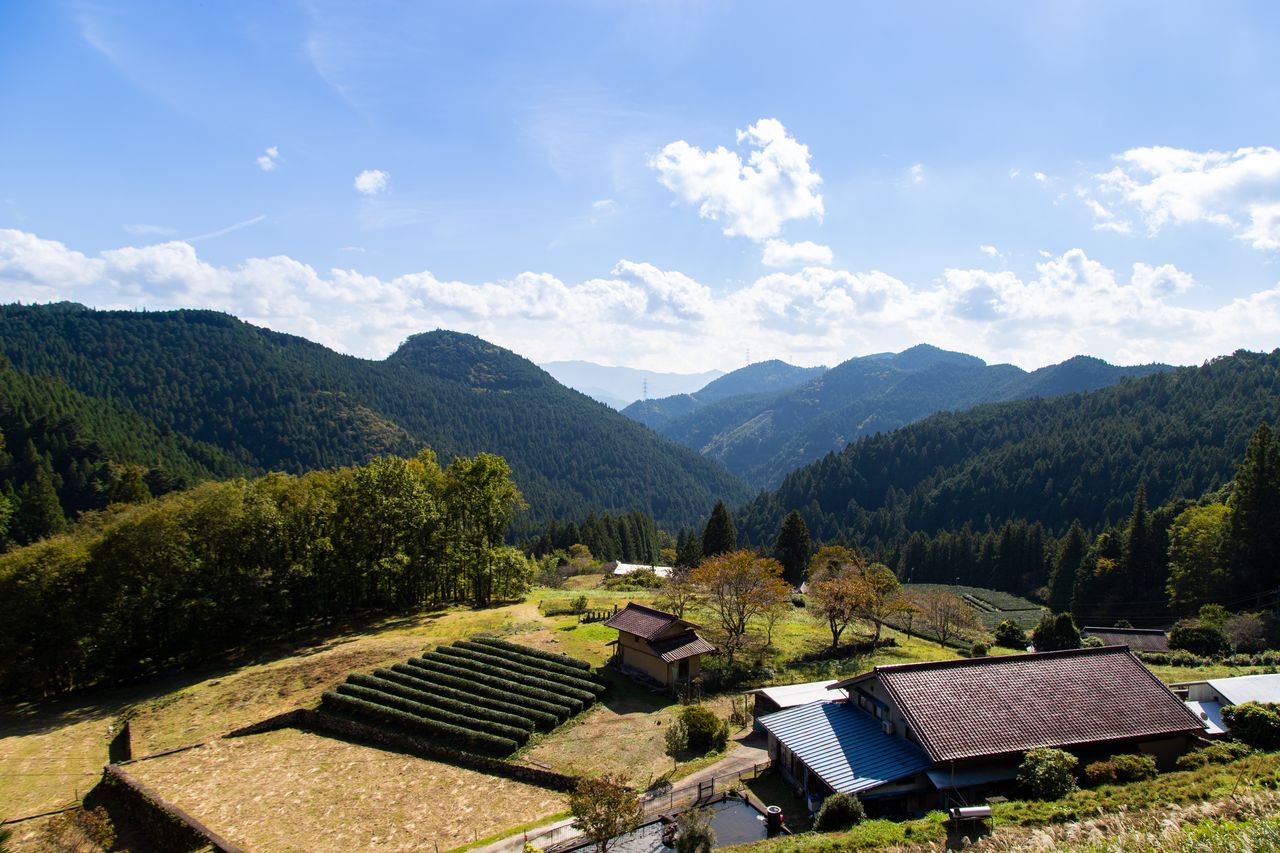 All That Glitters Is Not Gold

Something else that makes Tōei unique is sericite, a mineral used to make powder-based foundation cosmetics. Misaki Jun’ichi, CEO of Tōei-based Sanshin Mining, reflects on the origins of the local extraction industry.

“It all started when my grandfather came here looking for gold and found sericite.”

Shitara, to the west of Tōei, is home to the Tsugu mine, whose legendary Shingen mineshaft—named after feudal lord Takeda Shingen, who extracted a huge amount of gold from it—still exists today. Inspired by Shingen, Jun’ichi’s grandfather, Akimaro, began digging in the mountains of Okumikawa. While he did not find gold, he did hit a seam of sericite in the Awashiro mine. 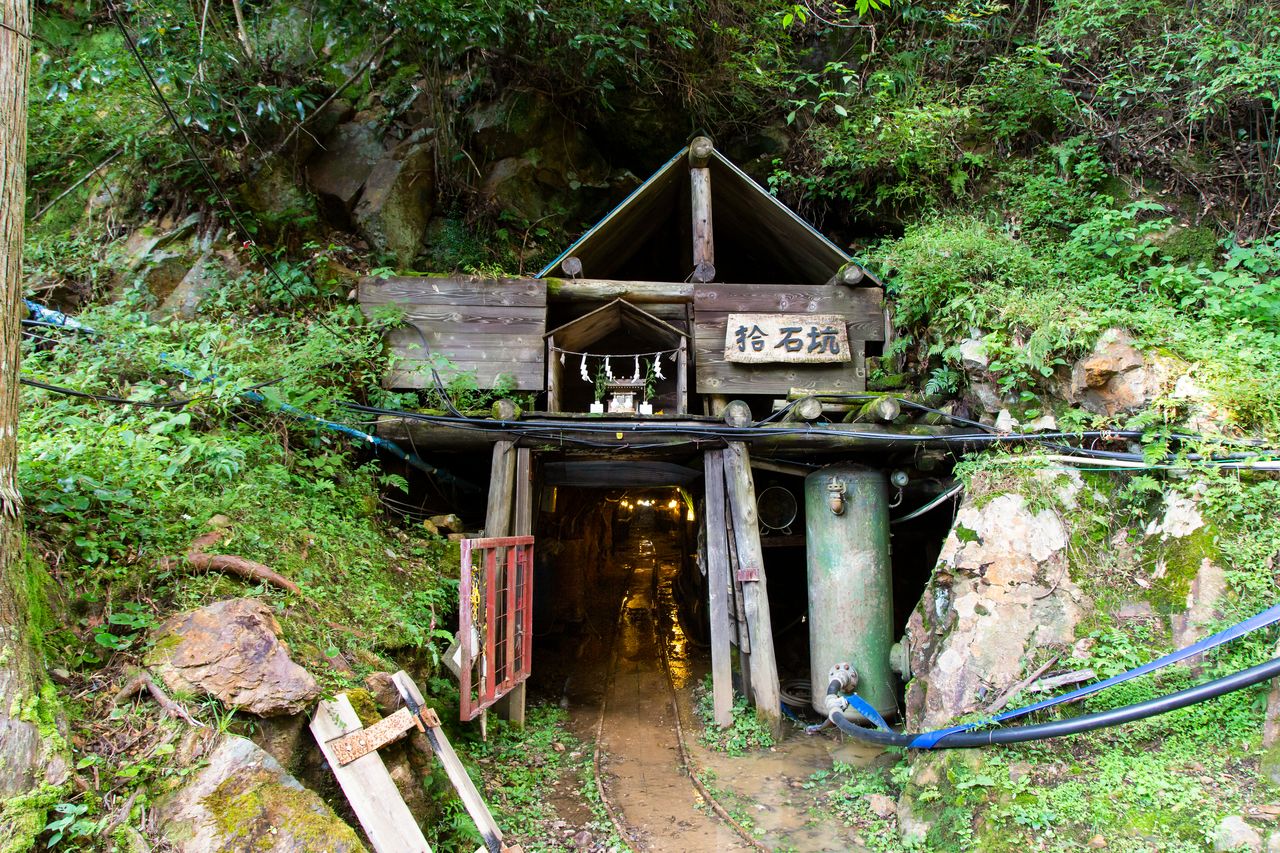 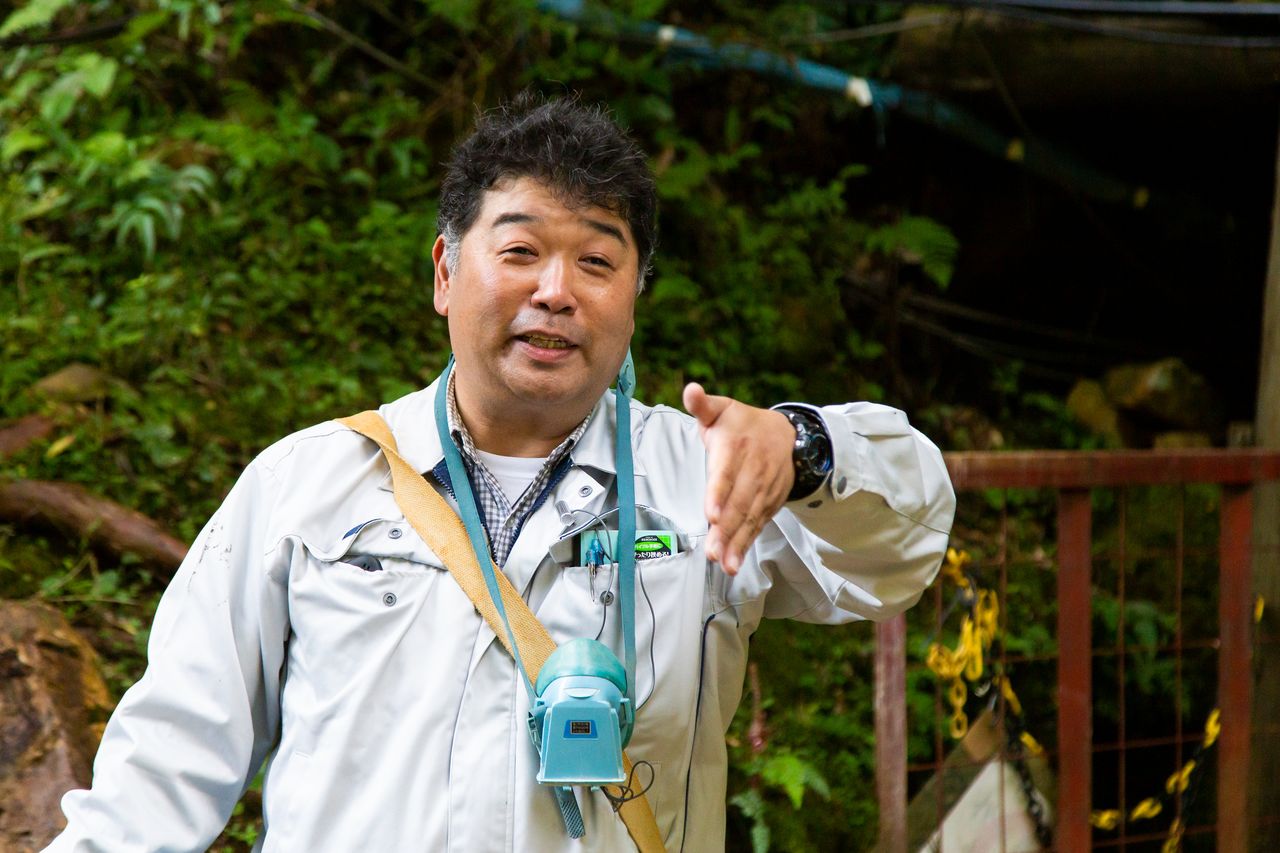 Misaki Jun’ichi, third in a line of miners, says he hopes to carry on mining sericite for at least 30 more years.

A type of mica often used in paint manufacture, sericite is known for its heat-resistance and insulating properties. Refined, it becomes a white powder with a silky sheen. The sericite from the Awashiro mine is extremely pure and unparalleled in fineness.

Misaki Akimaro established the Sanshin mine shortly after World War II, and sold the sericite to factories for use as lubricant and welding solvent. It was his son who started selling to cosmetic manufacturers at the end of the 1960s. Containing no harmful impurities and pleasant to the touch, sericite was once used in as much as 80% of powder-type foundation consumed worldwide. While the mineral is now also produced in China and Malaysia, the Awashiro mine still commands the lion’s share of global demand, supplying 80% of the Japanese market and 50% of the global market. Sanshin Mining’s sericite is indispensable, especially for high-end cosmetics. 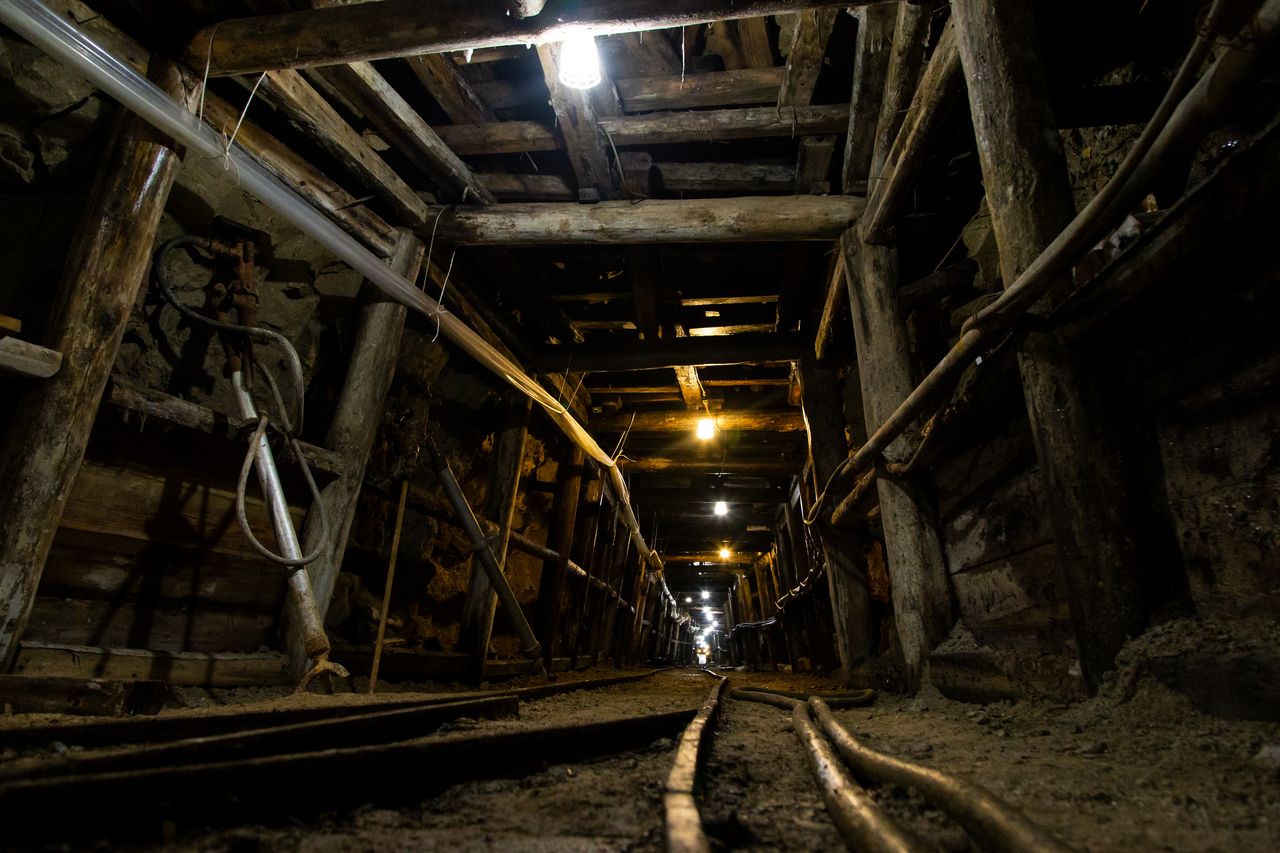 The ambient temperature in the mine is a pleasant 17°C all year round. 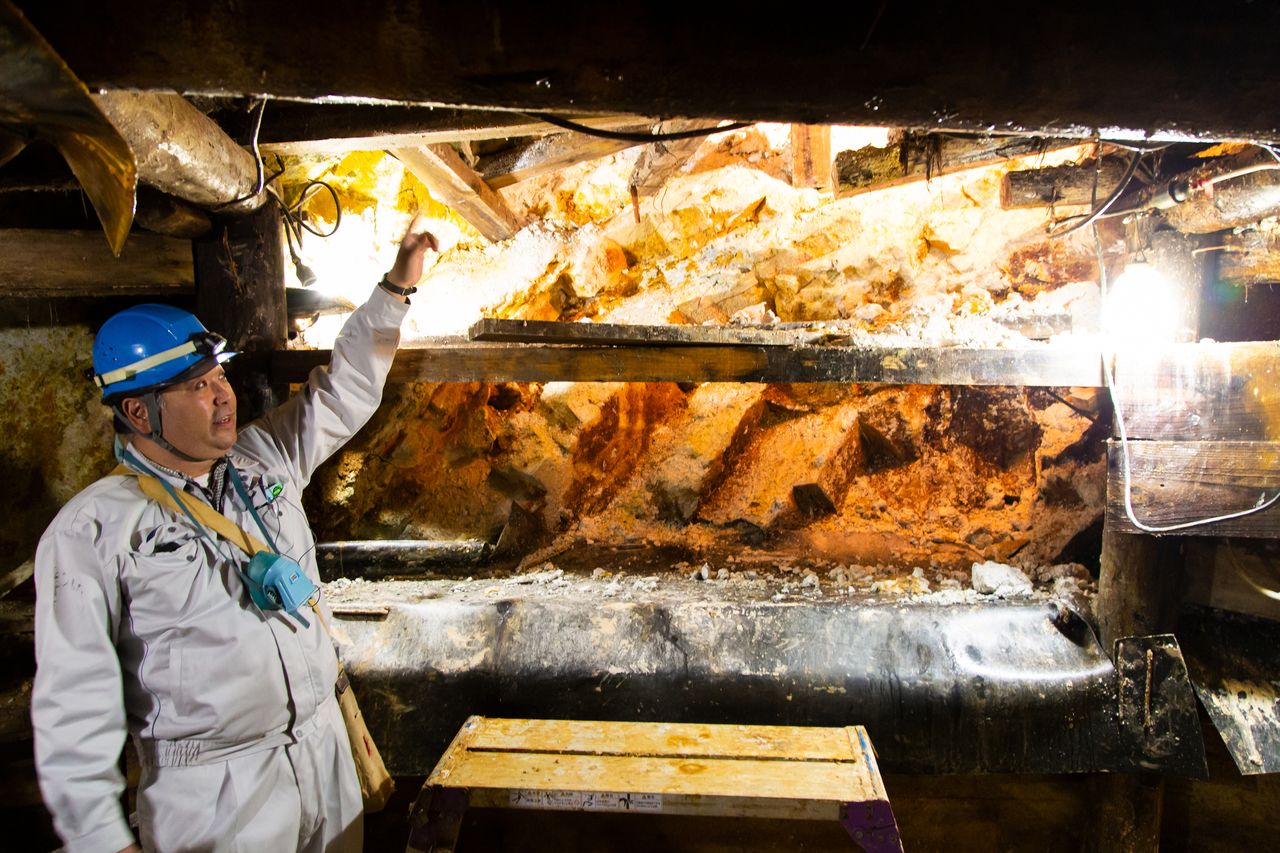 All sericite is mined by hand. 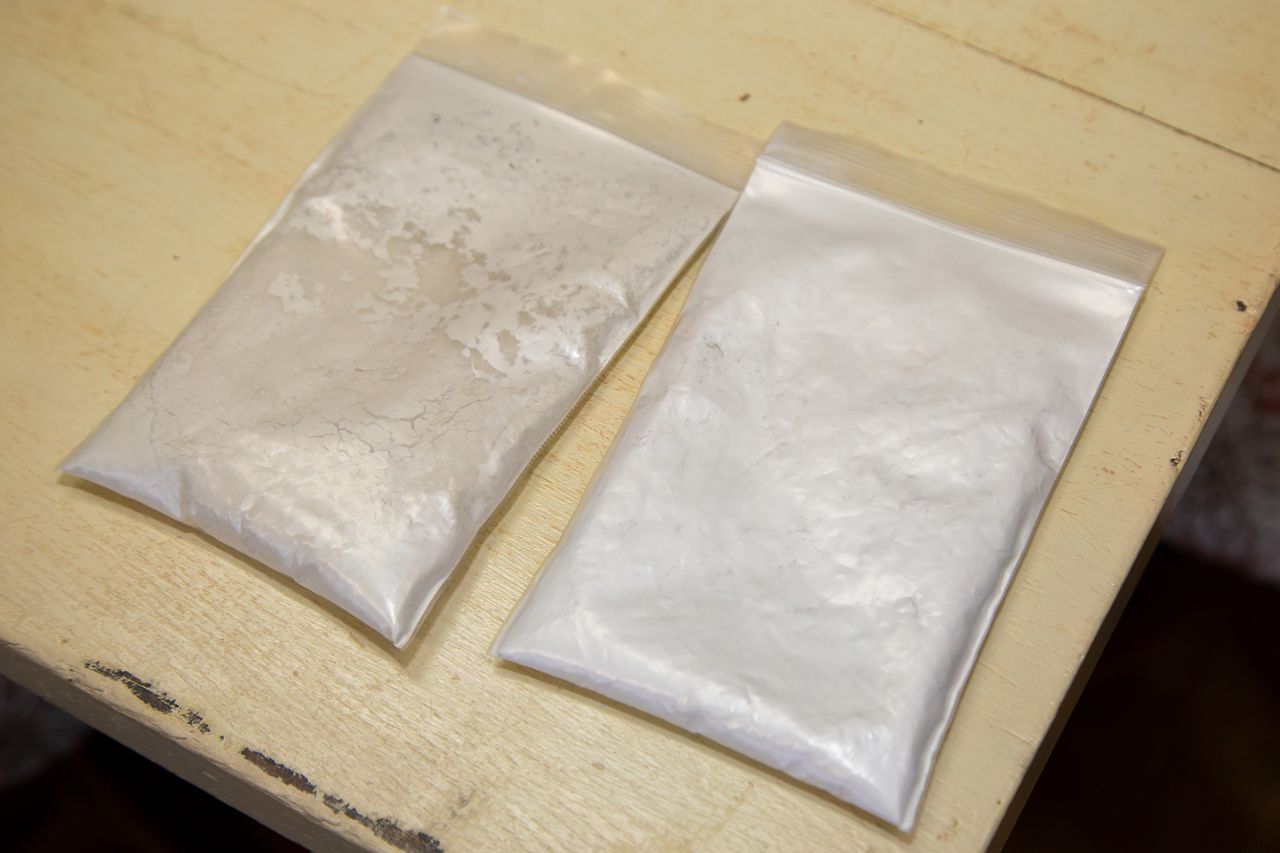 The sericite produced by Sanshin Mining (on the right) is much whiter and finer than that produced by a competitor.

While Japan used to have other sericite mines, Awashiro is the only one still operating. It was a woman named Ōoka Chihiro who took Jun’ichi’s idea of using Tōei’s unique status as a sericite producer and turned it into a business to attract visitors to the region.

Raised in Wakayama, Ōoka became interested the Tōei flower festival while still at university. After finishing her studies, she moved to Tōeichō as a “paid volunteer” to help promote the area. Working with Sanshin Mining, Ōoka established a business that made cosmetics by hand using locally produced sericite, under the concept of “buy local.” After the end of her posting, Ōoka stayed on in Tōei and established Naori, Japan’s first ever beauty tourism operator.

Naori operates out of a disused school that has been repurposed as the Nokiyama School, a hands-on learning and exchange facility where it holds make-your-own cosmetics workshops. Participants use sericite to make mineral powder foundation, blusher and eyeshadow, dusting powder, and other cosmetics. 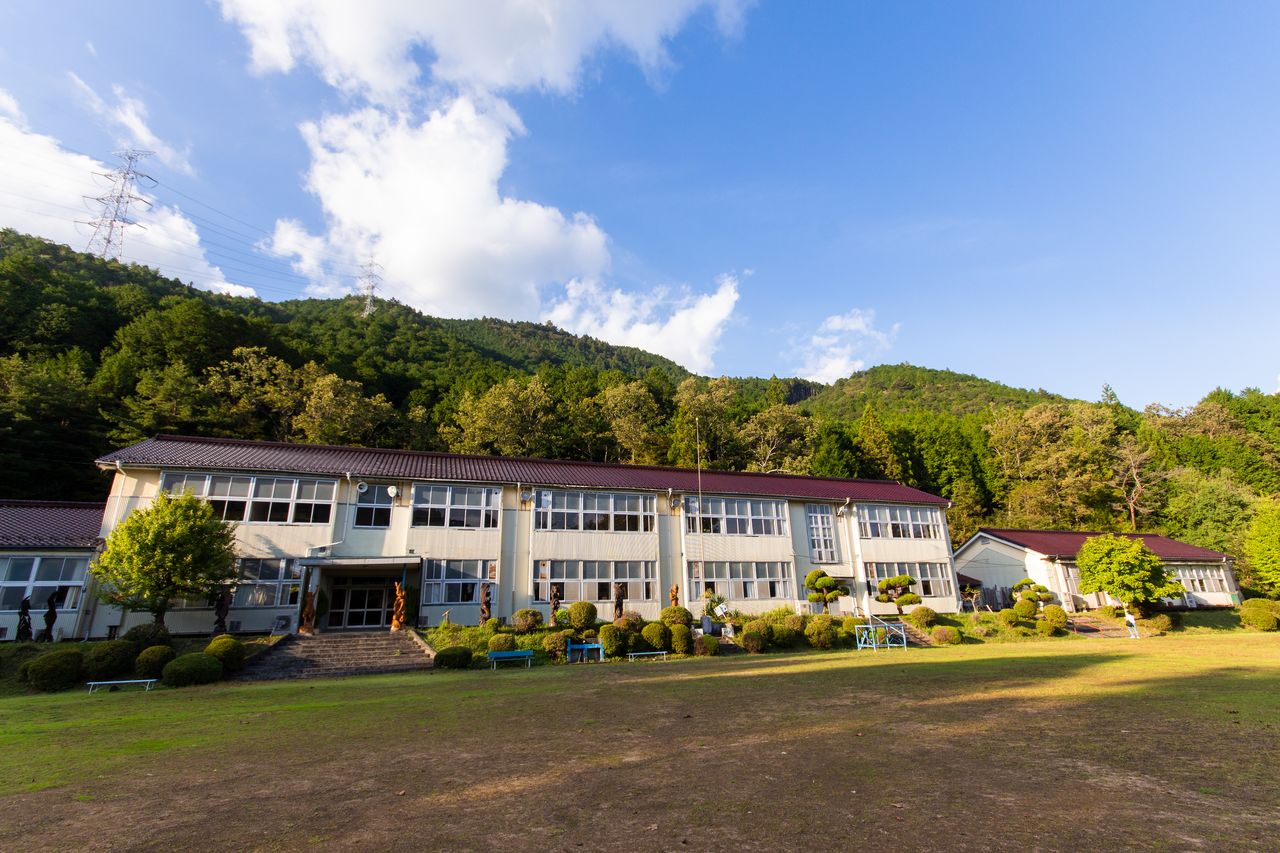 The Nokiyama School, housed in a disused school. 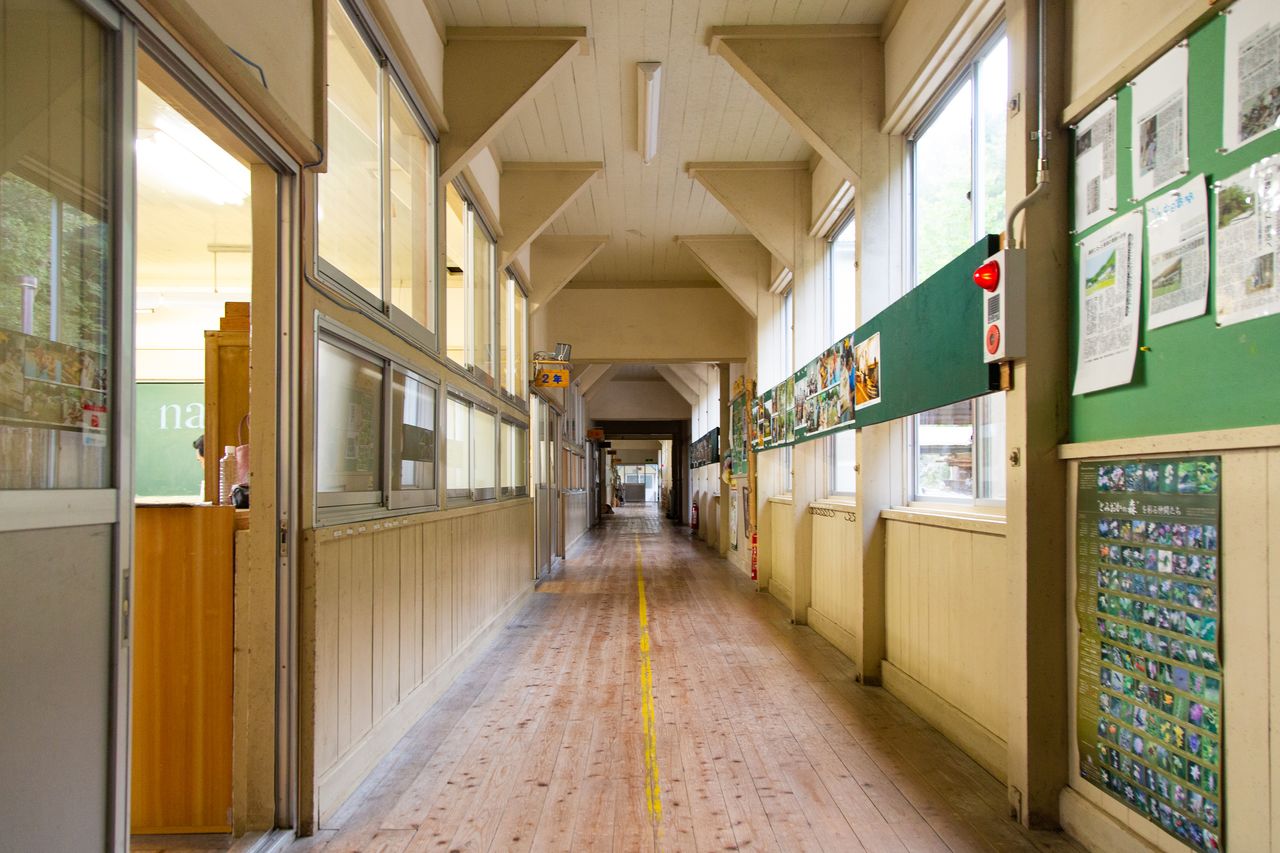 “If Naori becomes a catalyst for visitors to learn about the region’s natural beauty, flower festivals, hot springs, and other attractions, it will give locals a sense of purpose. It might even encourage people to move here,” says Ōoka.

“My makeup used to give me spots, but when I switched to a product made from natural ingredients blended to my liking, my skin cleared up completely,” she says. Because of this experience, Ōoka feels that she can now recommend handmade products to others with confidence. 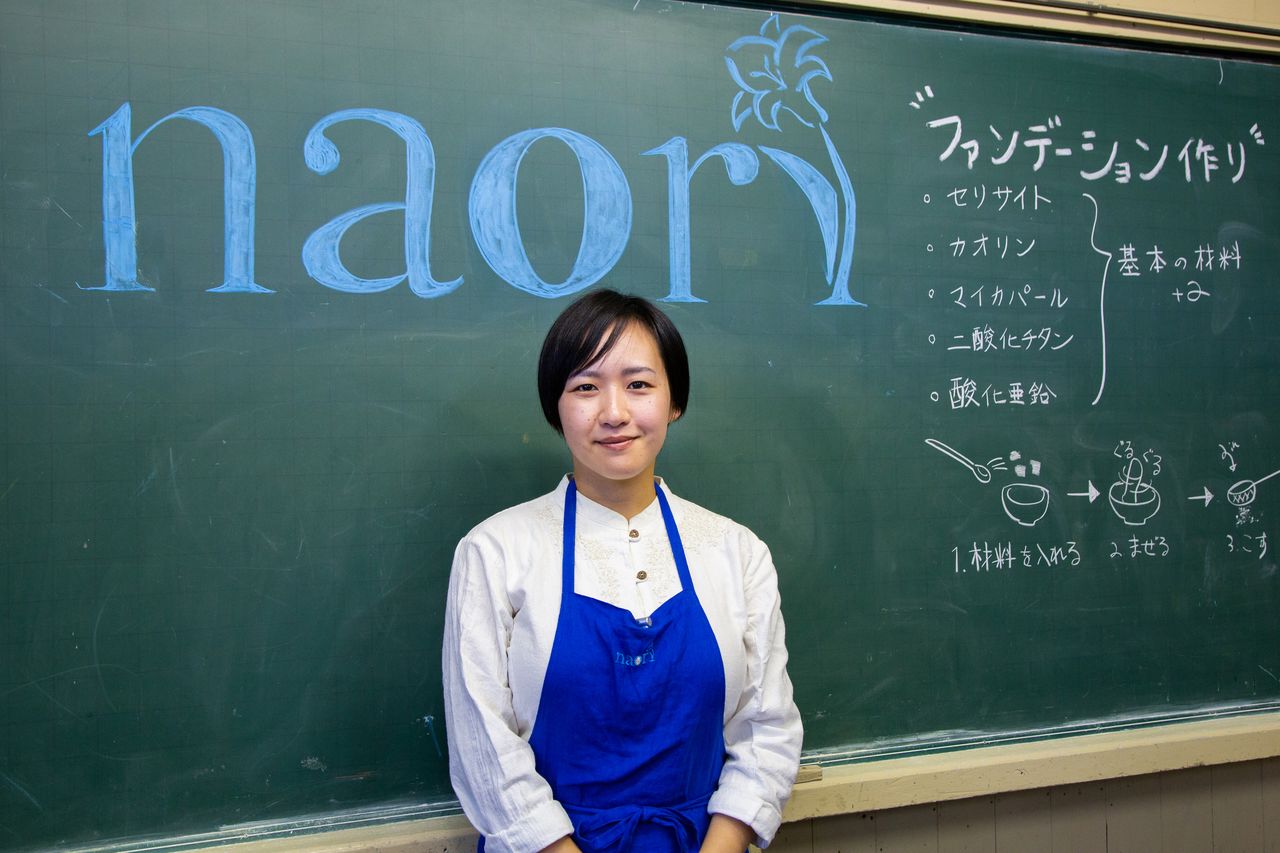 The workshops start with an explanation of sericite and the other ingredients that go into cosmetics. Most participants do not know what goes into the cosmetics they use every day, says Ōoka. The sessions run for 60 to 90 minutes, and involve no challenging tasks.

Participants make their own foundation by placing an ample quantity of sericite in a mortar, then adding kaolin clay, which has moisturizing and astringent properties, mica pearl for luster, titanium dioxide and zinc oxide for UV protection, and finally coloring. The ingredients are then mixed thoroughly, and the mixture sifted. Participants like the fact that many of the ingredients used are produced in Japan, and that the mixture can be adjusted to give the desired tone and degree of luster. 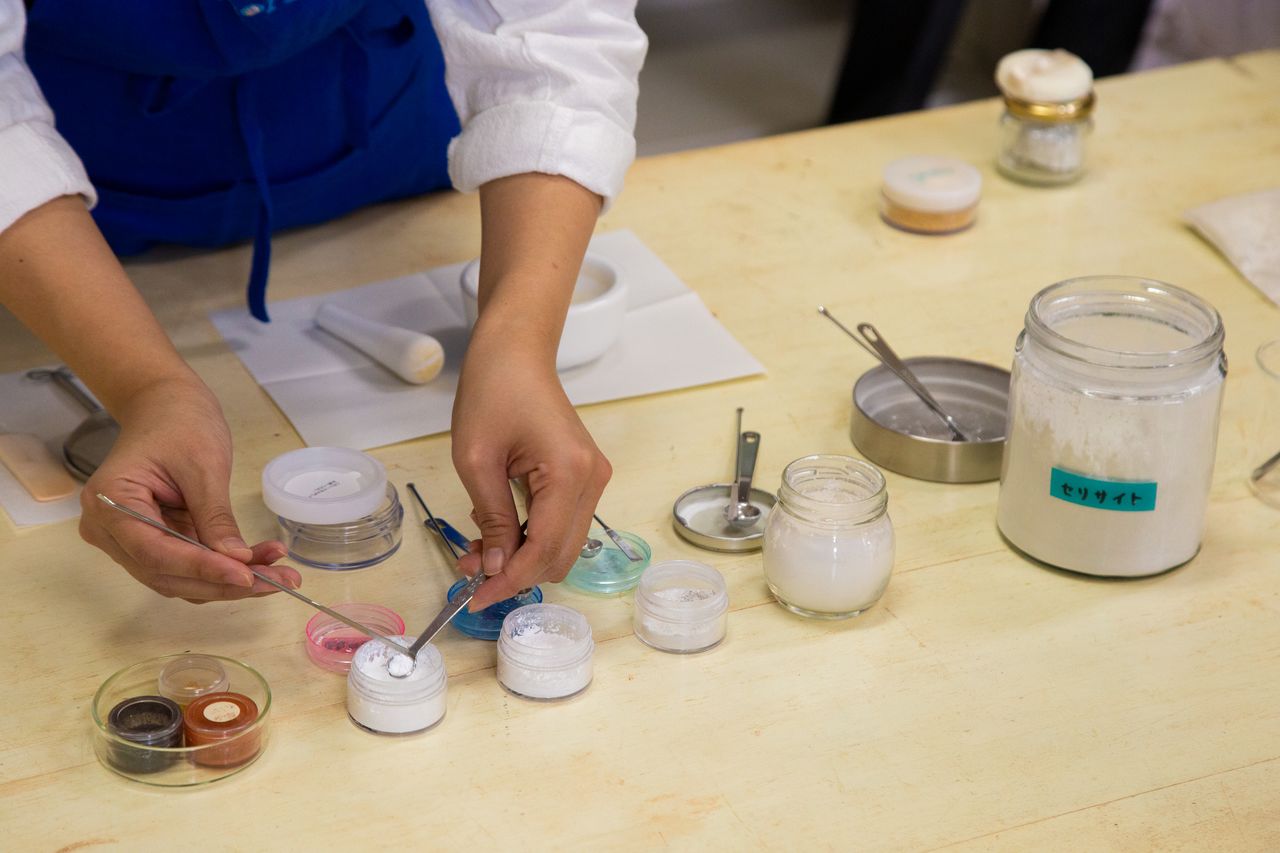 Quantities can be varied to suit skin type and skin tone. 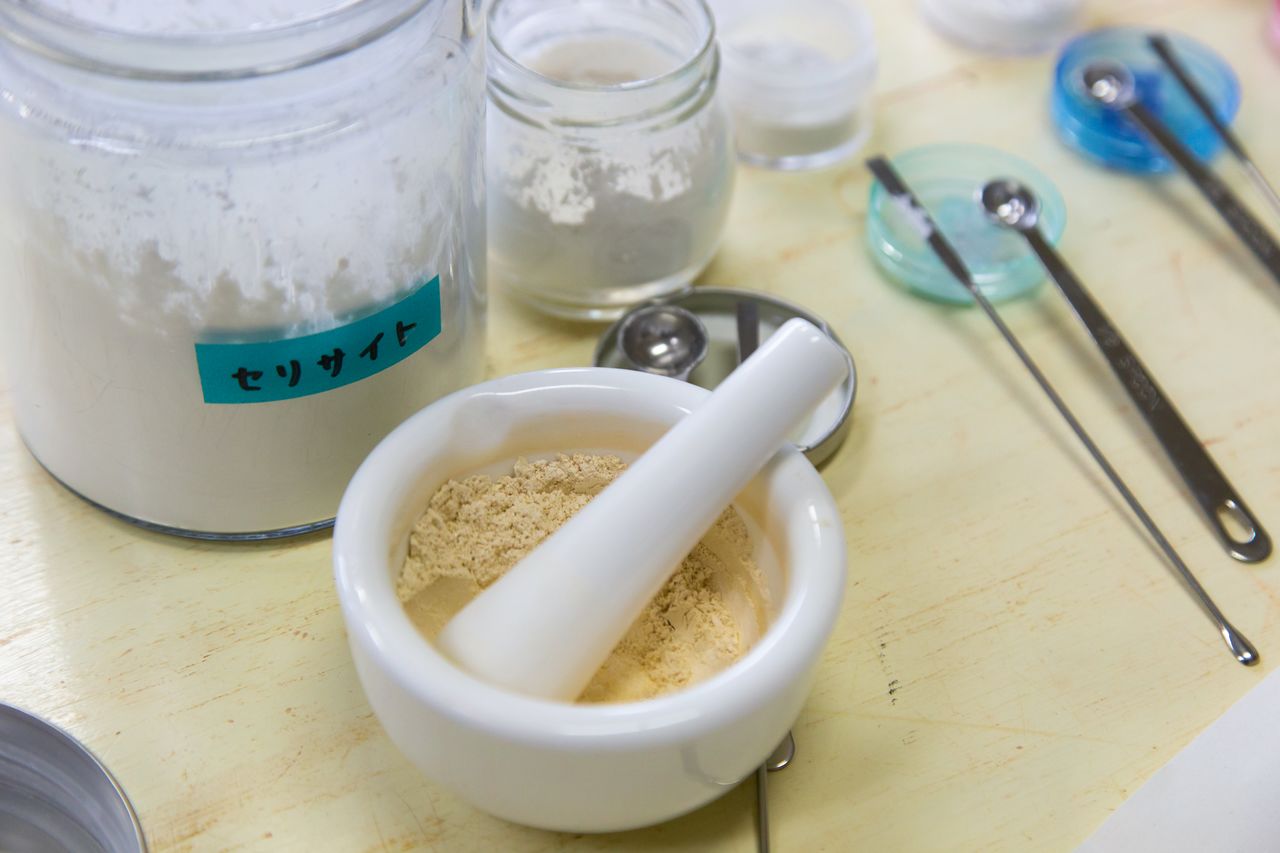 This foundation is not even finished and it already feels great!

Workshop participants will go home with about three months’ supply of foundation, which has a shelf life of around six months. Sericite produced by Sanshin Mining is only available on a wholesale basis, meaning that participants who want to keep on using homemade foundation have to come back to Tōei. Ōoka says that between 20 and 30% of workshop attendees do make the return trip because they like the superior texture of the product. The workshops are extremely popular, and as of the end of September, 2019 when we visited, weekend sessions were already fully booked until early in 2020.

Furthermore, the workshop held on every second Saturday of the month combines cosmetic making with a tour of the sericite mine. In the same way that foodies like to visit the areas where their favorite dishes are produced, beauty enthusiasts must relish the opportunity to make their own cosmetics and see for themselves the mine that provides the ingredients they put on their skin.

For those who do not use cosmetics, Ōoka also offers a bath bomb workshop. Participants can blend locally produced honey, green tea, and herbs into their bath bombs to create different scents. 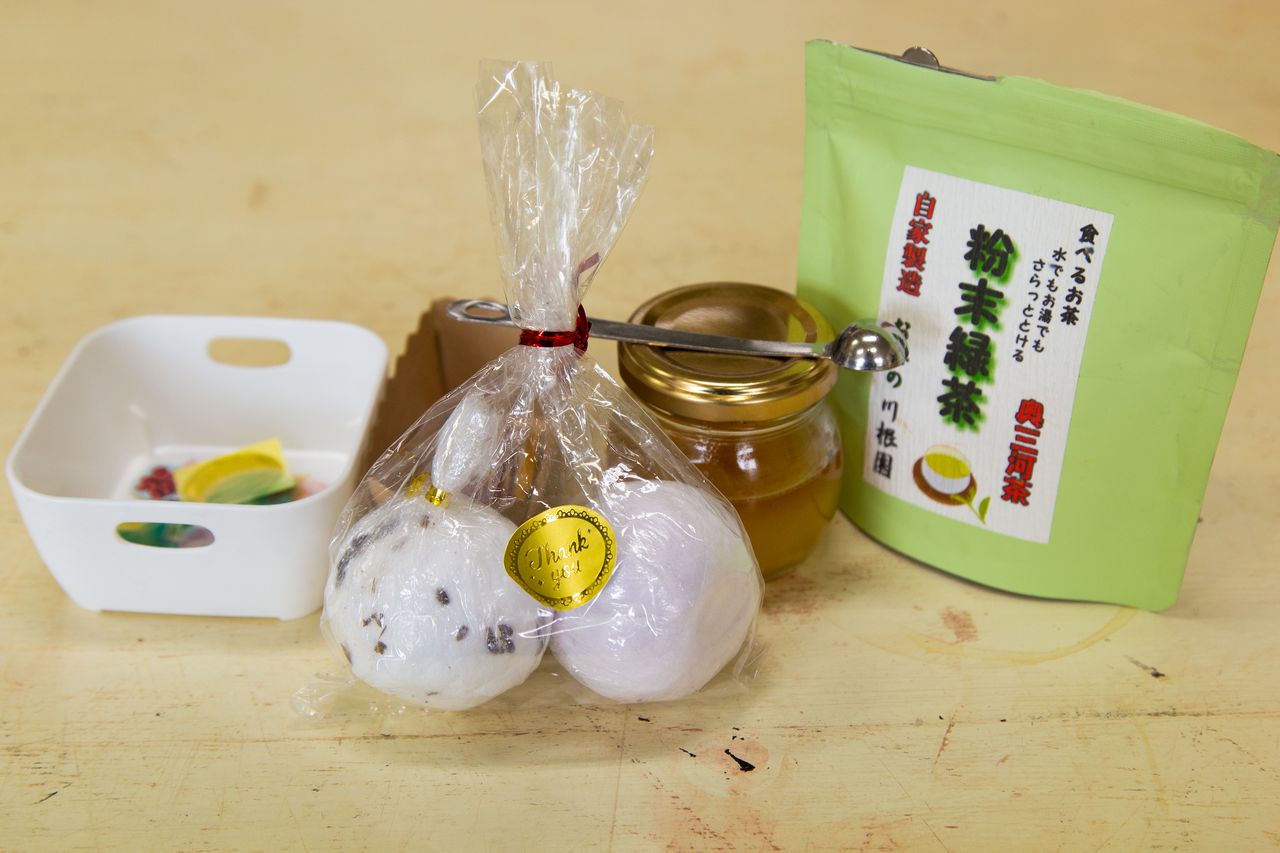 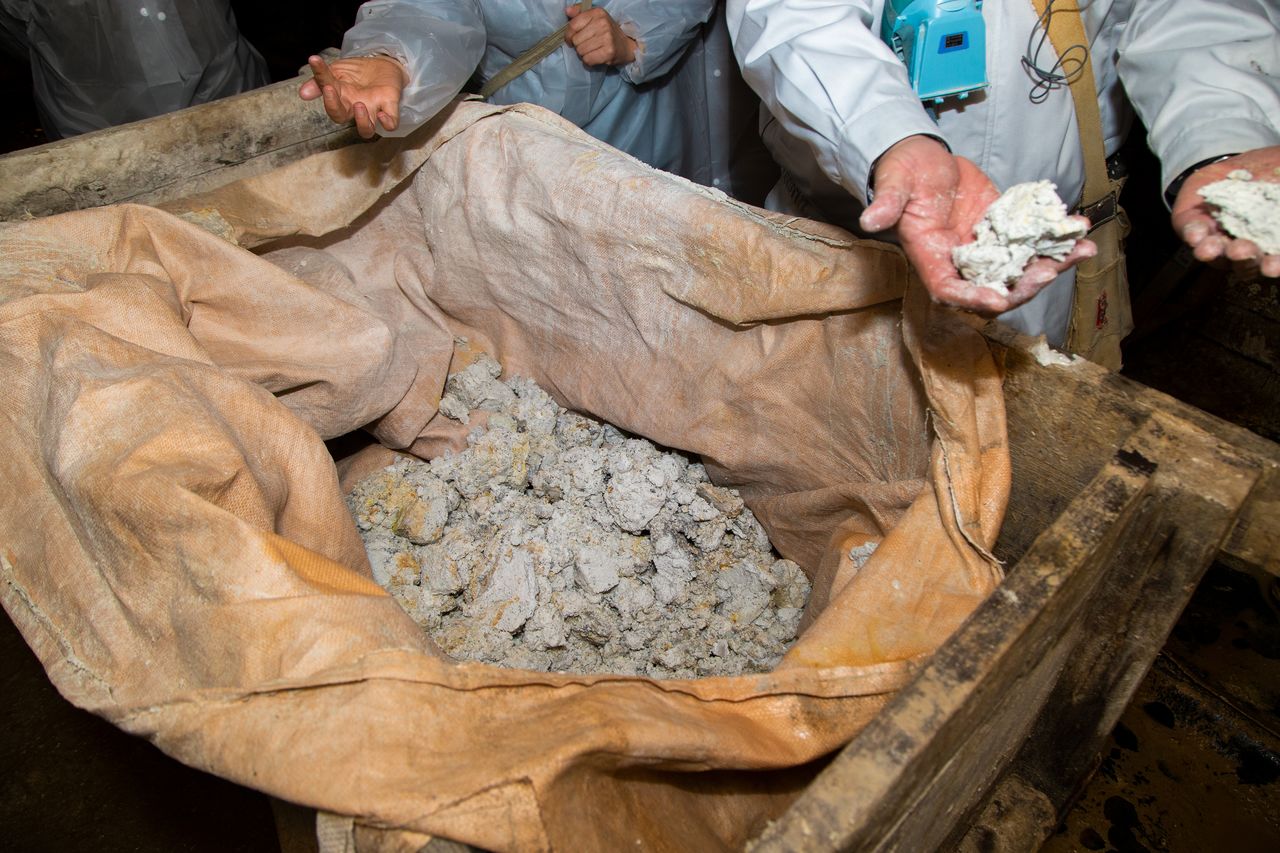