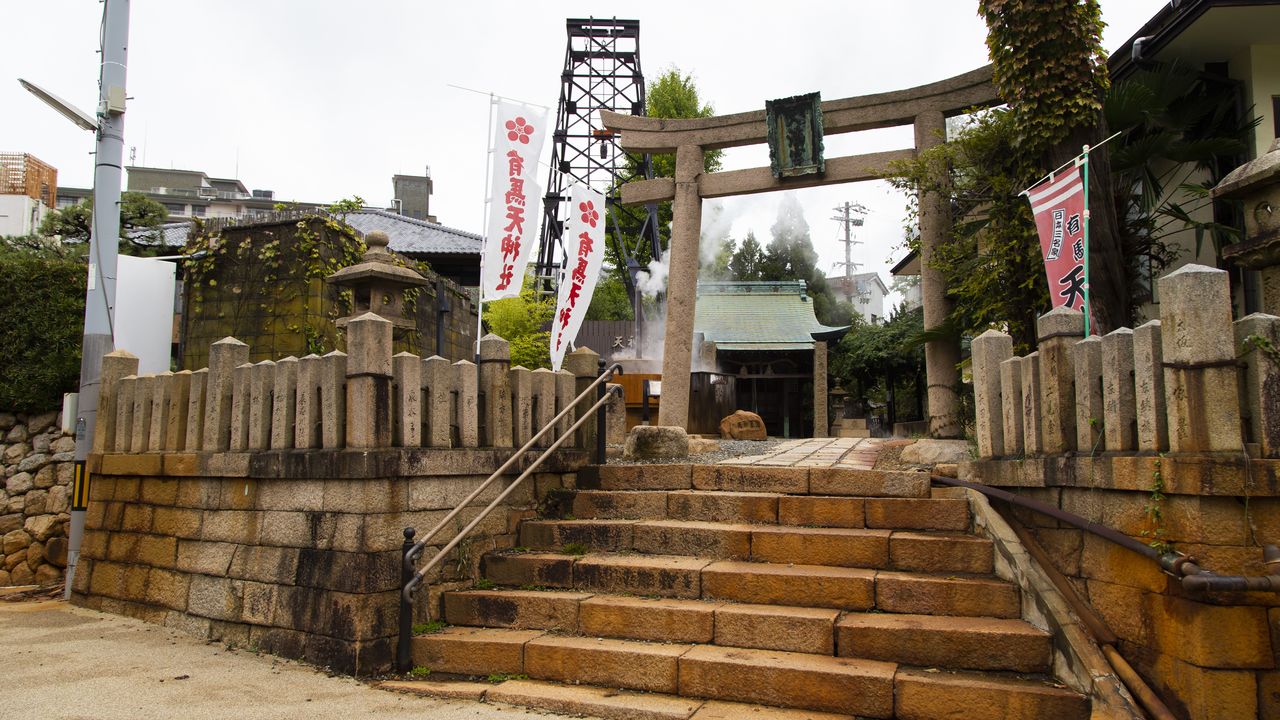 Travel Dec 6, 2019
Kobe’s Arima hot springs, a favorite of the medieval warlord Toyotomi Hideyoshi, have long been counted among Japan’s finest baths. Close to central Kobe, located in a charming historical area, the springs are prized for their curative properties. We look at options for those visiting Arima for a day.

A Resort Loved by Emperors and Daimyō Alike

According to Nihon shoki, a chronicle that was completed in 720, Emperor Jomei (r. 629–641) stayed at Arima for three months in 631. Sei Shōnagon, author of The Pillow Book (circa 1000), and the Edo-period Confucian scholar Hayashi Razan also praised the spring. 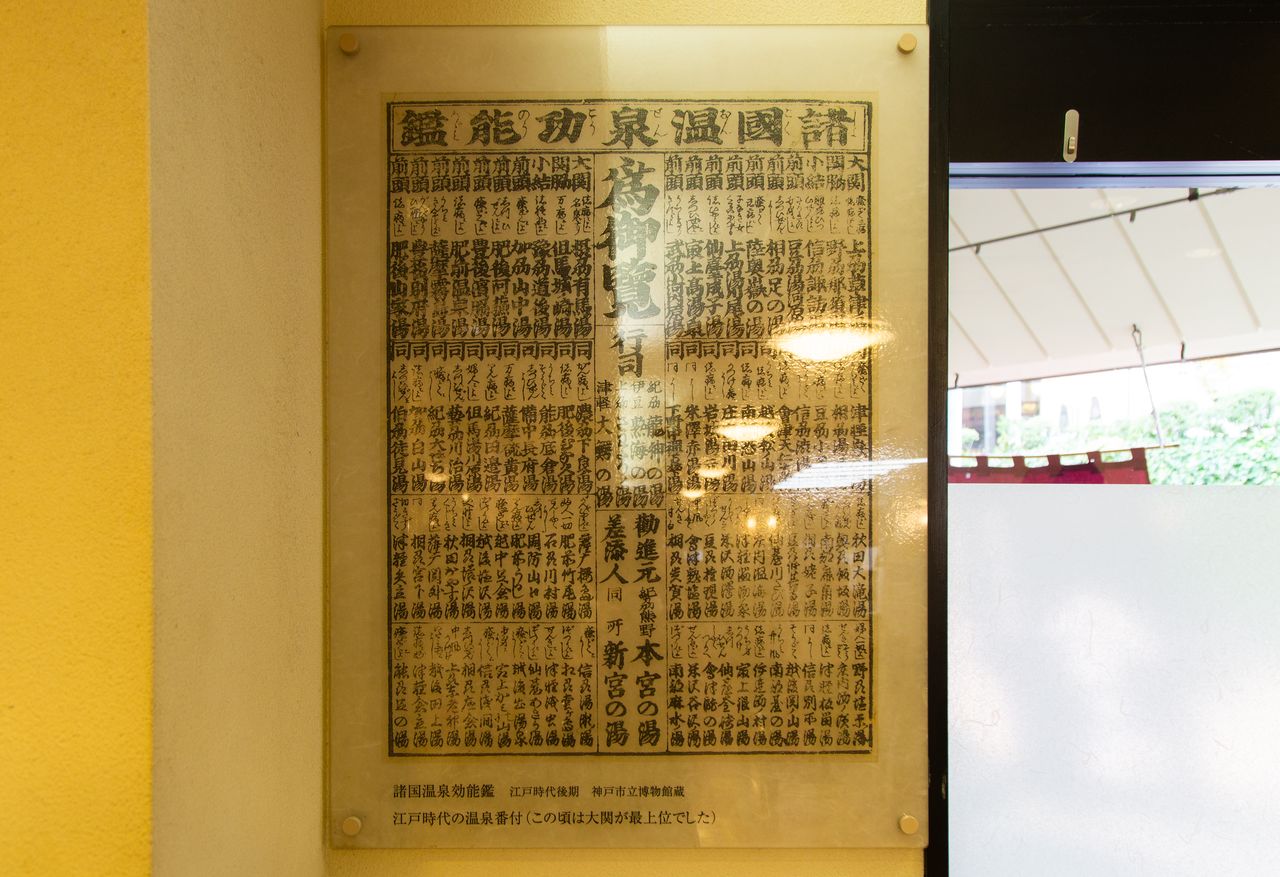 An Edo-period ranking of hot springs displayed at the Kin-no-yu public baths. Arima is ranked on a par with Kusatsu.

The foundations of the township were laid by the prominent Buddhist priest Gyōki in the 700s. At the end of the twelfth century, a priest by the name of Ninsai rebuilt Onsenji, adding 12 lodging quarters for pilgrims, in a move that helped revitalize the area. But it was prominent feudal lord Toyotomi Hideyoshi (1537–98), who visited Arima frequently to recuperate, who really developed the area. When the Keichō Fushimi earthquake of 1596 damaged many buildings and caused the temperature of the spring waters to rise, Hideyoshi embarked on a major rebuild, and even made improvements to the spring itself. Arima operated for 350 years after that without the need for further improvements to the spring’s basic infrastructure, and many buildings and local specialties bear Hideyoshi’s name in a mark of the community’s gratitude to the man who established the foundations for centuries of prosperity. 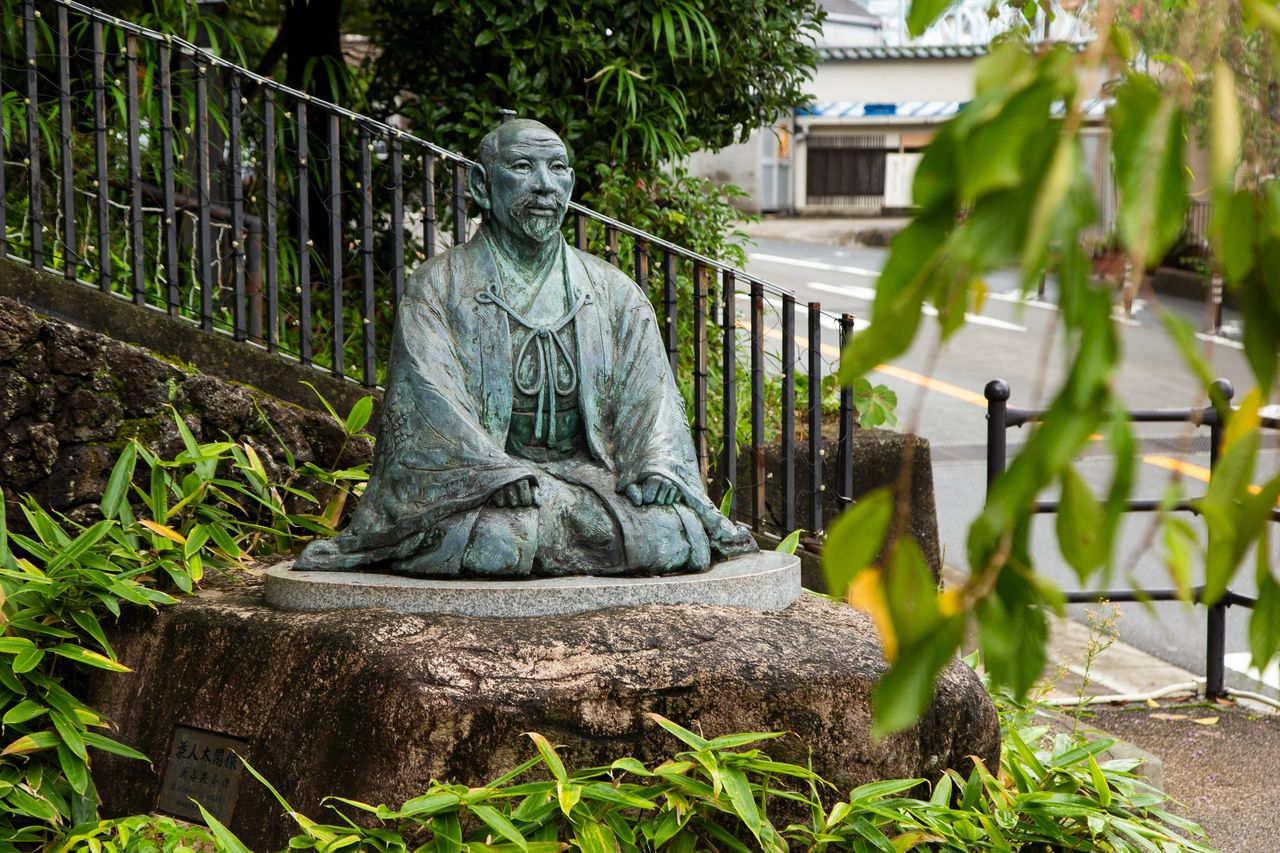 A statue of Hideyoshi at the foot of the Taikō bridge over the Arima River. 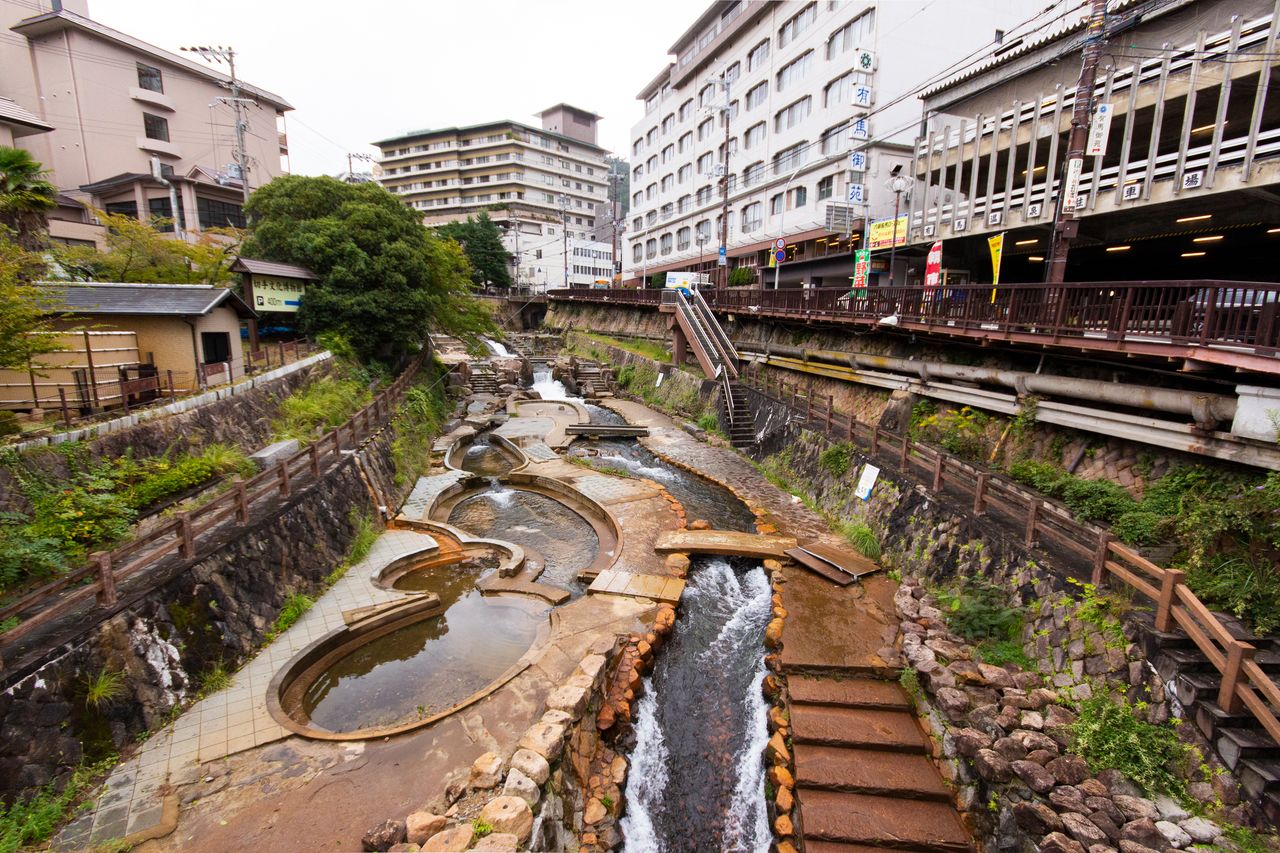 Arima River Shinsui Park viewed from Taikō bridge. Note the pond in the shape of a gourd, which was a symbol of Hideyoshi.

The spring’s very existence was for a long time a mystery. While Japan’s abundant geothermal activity is attributed to the country’s status as a volcanic archipelago, there are no volcanic vents anywhere around Arima. It was only in 2003 that a theory emerged to explain the presence of a thermal spring in an area with no volcanoes. Specifically, the islands of Japan straddle four tectonic plate boundaries. When the Philippine Sea plate subducts beneath the Eurasian plate on which Japan sits, moisture contained in rocks that lie 60 kilometers below the surface is warmed by the Earth’s mantle, and spurts upward in the form of the Arima spring. Because the plates move very slowly, it takes around 6 million years for seawater to turn into a geothermal spring. The minerals from the rocks, by dissolving into the water over long eons, make the Arima spring one of Japan’s finest. 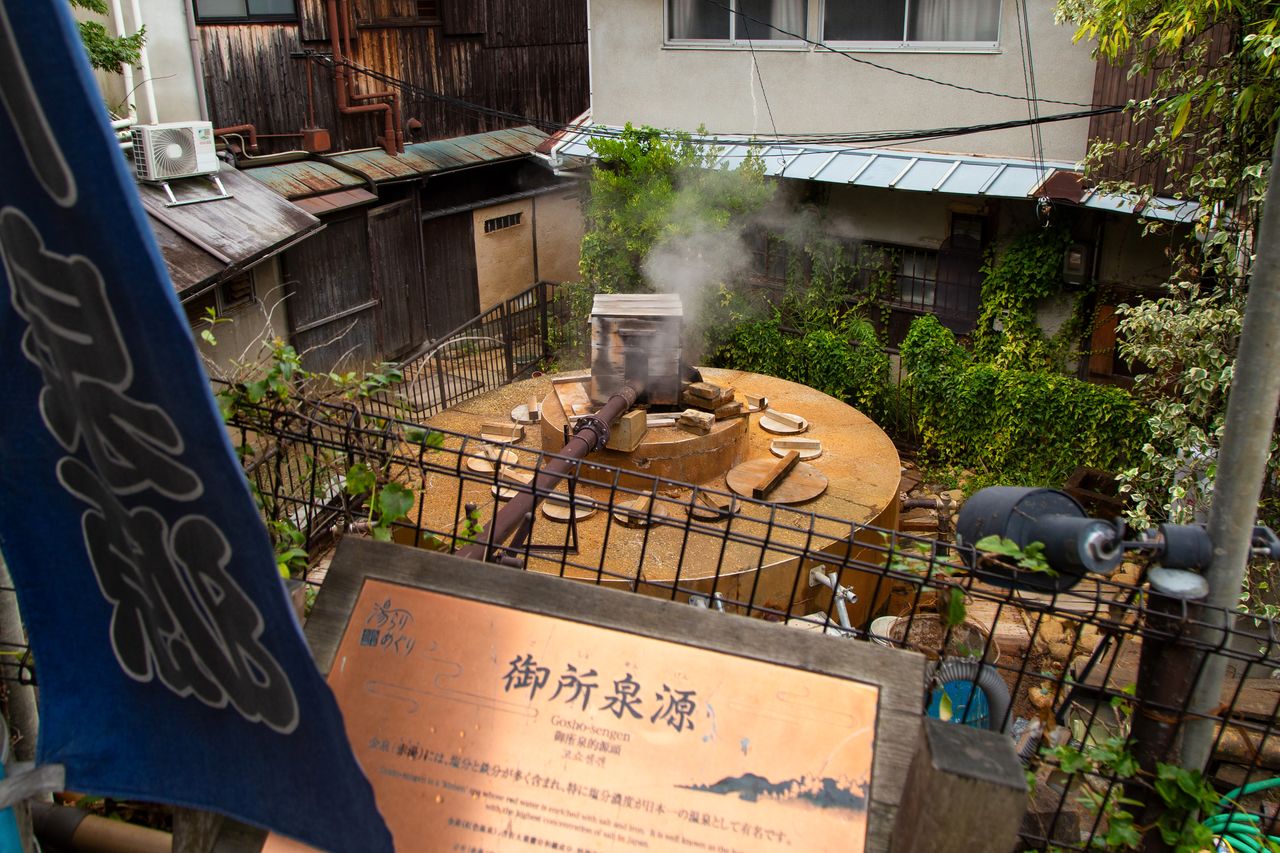 Steam rises from one of Arima’s six bores. 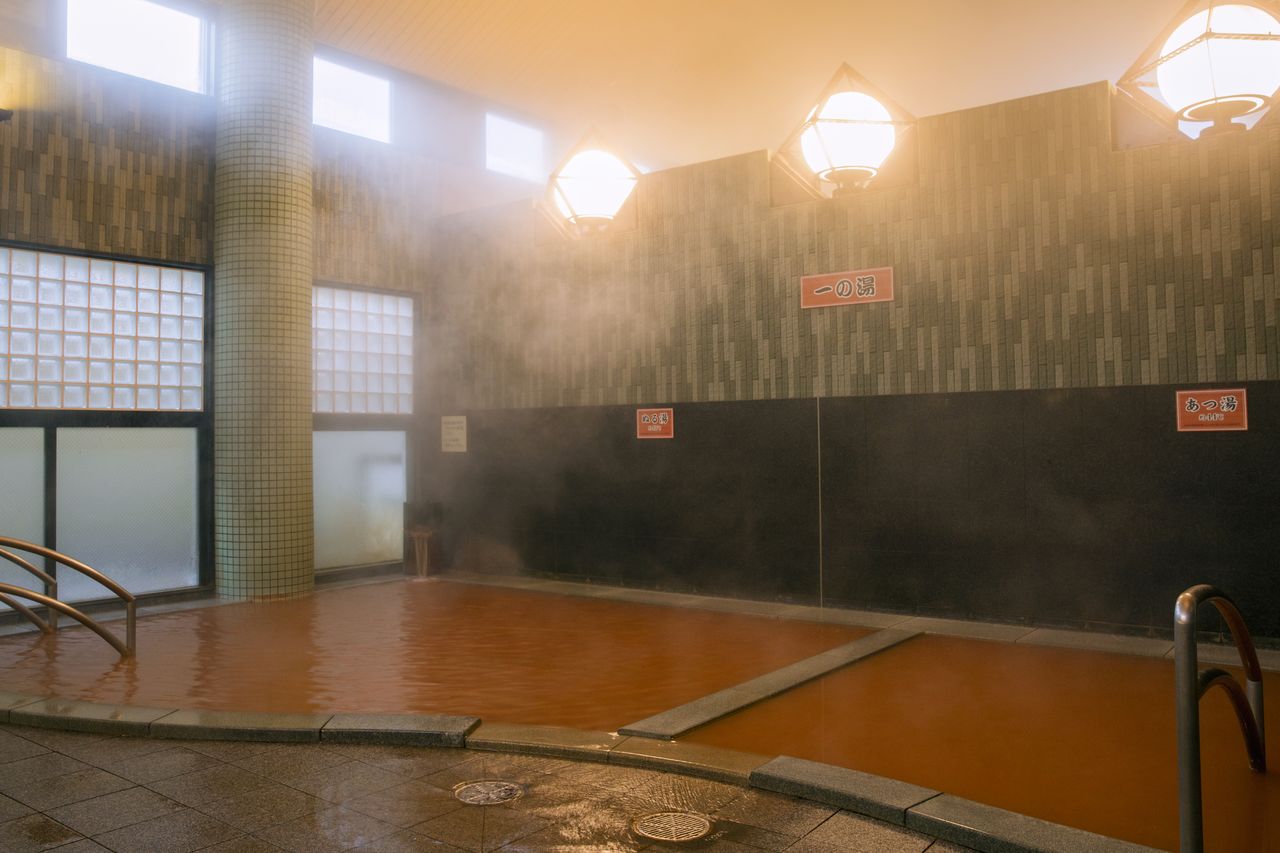 The Perfect Day Trip from Kobe

Arima also boasts a convenient location, only about 30 minutes from Sannomiya or Shin-Kobe stations by the Kobe municipal subway and Kobe Electric Railway. If you would rather forgo the hassle of changing trains, there is also a direct bus service that will get you to this charming thermal resort in as few as 45 minutes from Sannomiya. From Osaka, the trip is about an hour. Arima makes a perfect short break from the city to destress and recuperate. 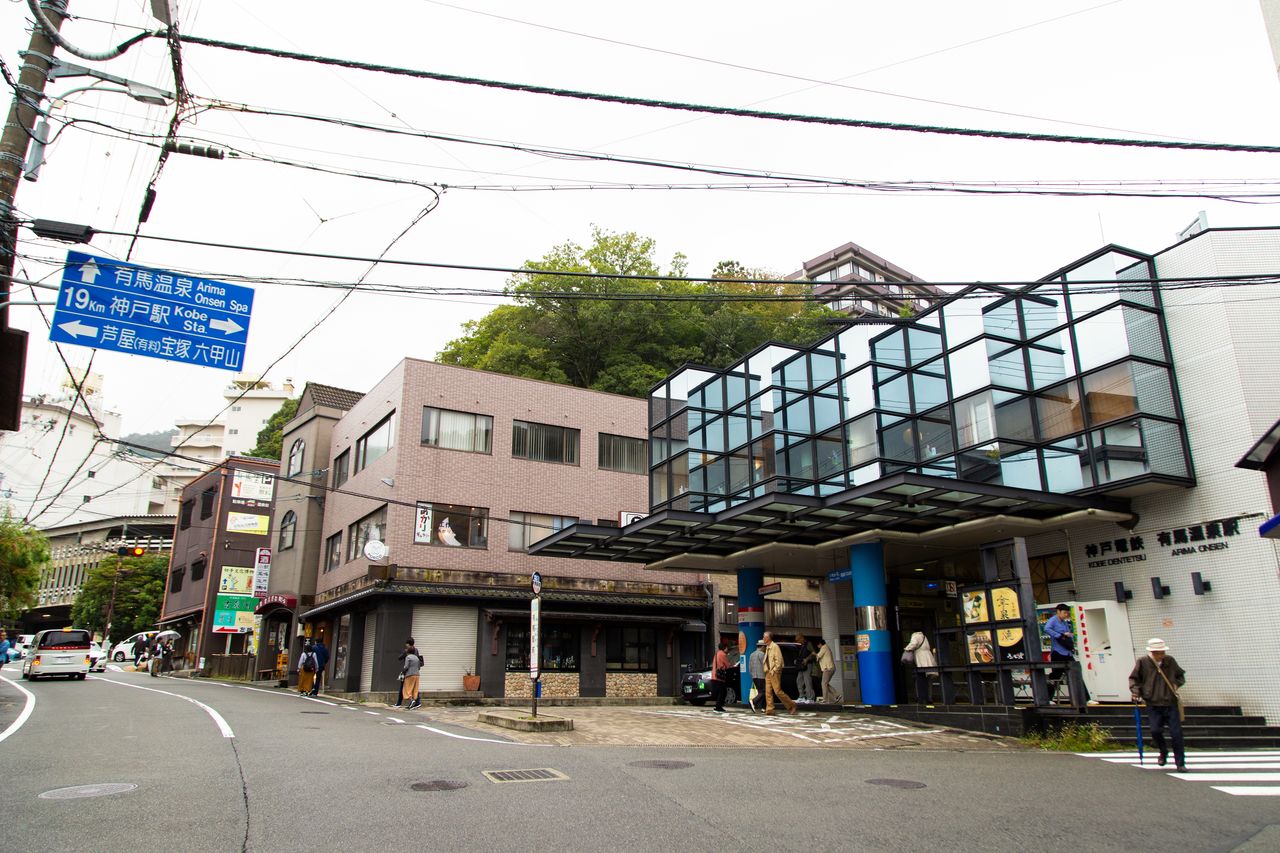 The retro Yumotozaka thermal area is only around 3 minutes’ walk from Arima Onsen station on the Kobe Electric Railway line.

There are two main types of thermal spring at Arima Onsen. One is a highly acidic spring rich in iron salts, known as the “golden spring” on account of the fact that it oxidizes upon contact with the air, turning a characteristic reddish-brown color. The other is a carbonic spring that does not change color after surfacing, known as the “silver spring.” There are many lodging facilities in the area offering both rooms for the night and per-day access to the waters. Kin-no-yu and Gin-no-yu, which are both open to day visitors, are good, inexpensive options for those who want to enjoy a genuine thermal spring. Many visitors buy an ¥850 ticket that gives admission to both facilities so they can enjoy the two different types of spring.

The popularity of the golden spring stretches back many years. At Taikō no Izumi and Taikō no Ashiyu, near Kin-no-yu, visitors can sample the waters with their feet for free. The bathing area is upstairs and offers a hot, 44°C bath as well as a cooler, 42°C one. 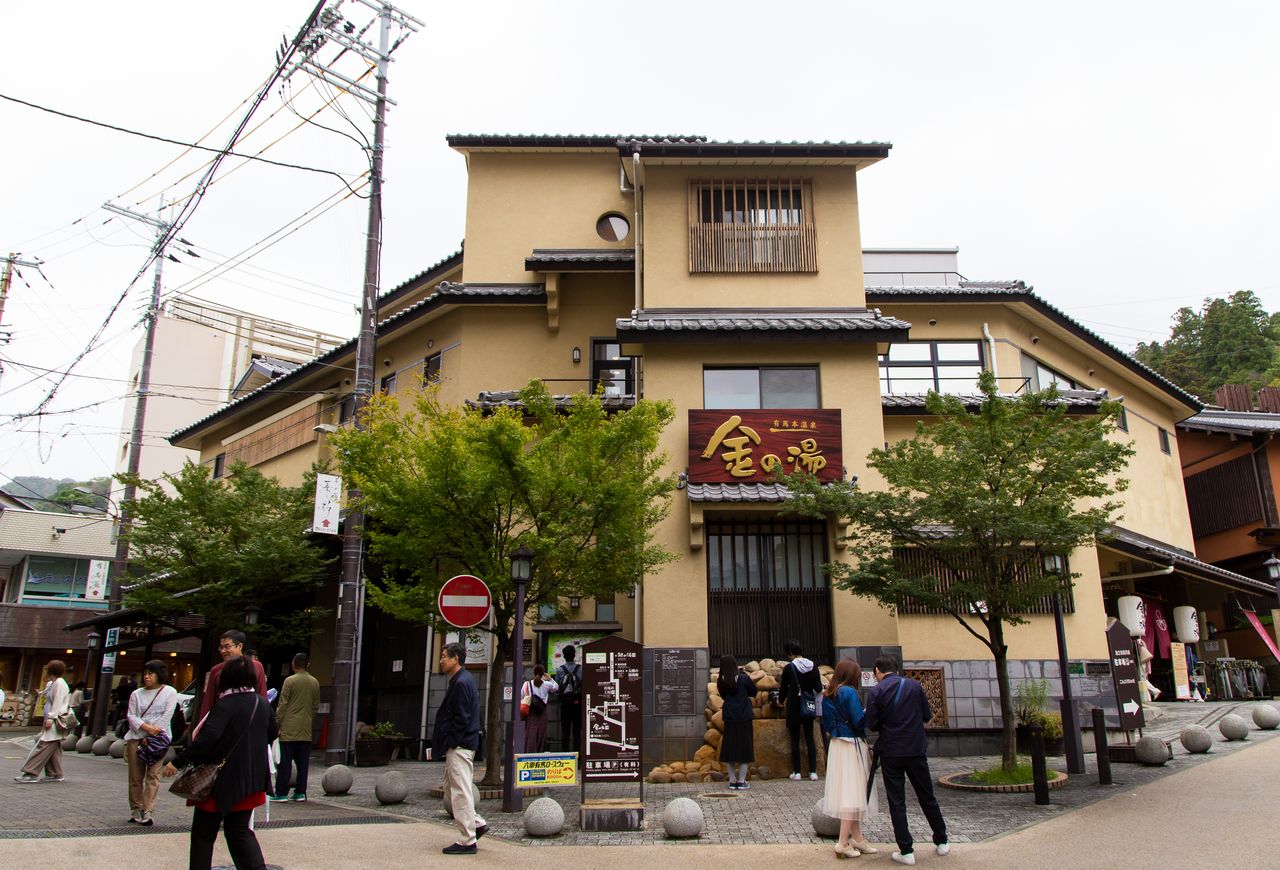 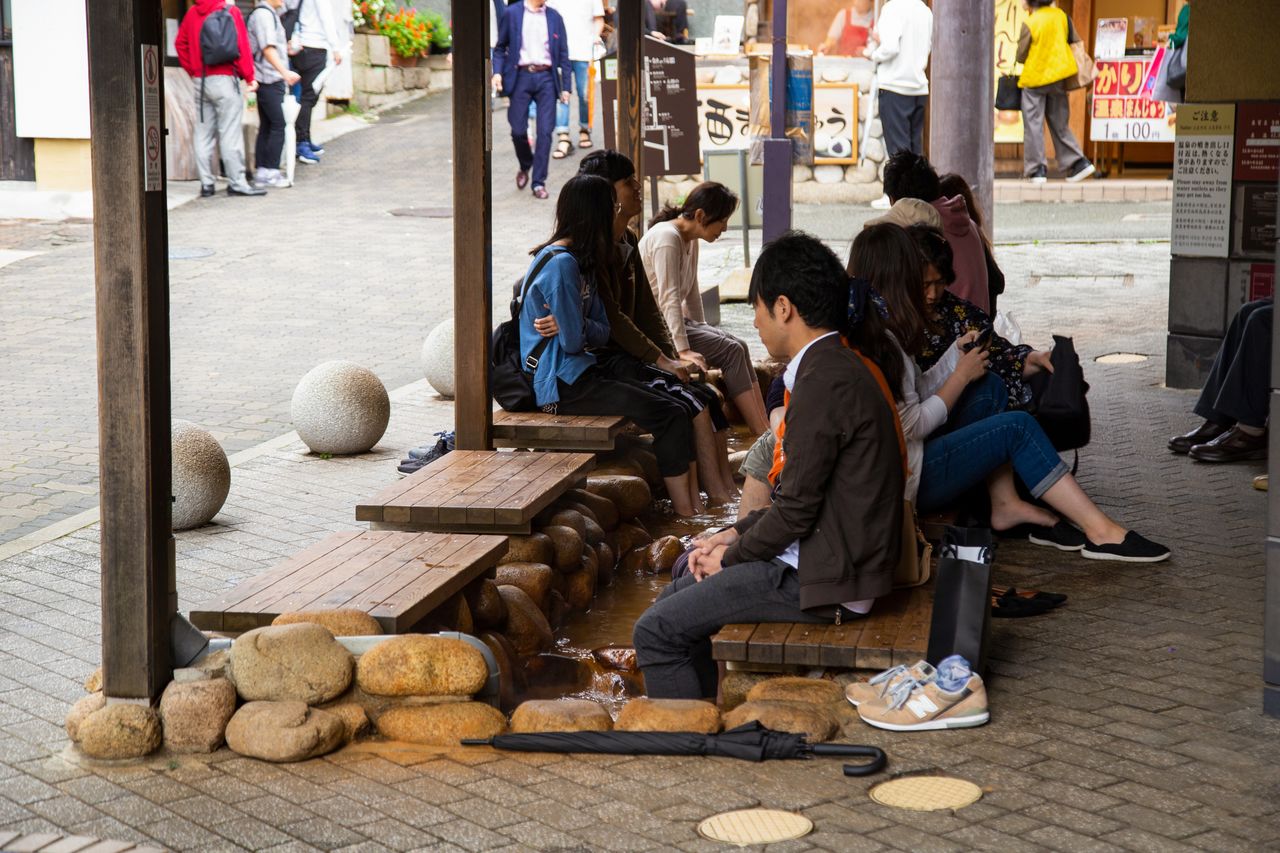 All you need is a towel to enjoy the foot bath.

The silver spring contains a blend of carbonic acid and radium salts. In addition to a high-ceilinged interior, Gin-no-yu also offers a steam sauna and cascading streams of water that can be used to massage the shoulders.

In olden times, people feared carbonated springs, as it was held that birds, insects, and small animals would drop dead if they drank from them. It was not until the 1800s that the Home Ministry discovered that it was carbon dioxide gas that was making small animals suffocate, and that carbonated water was in fact highly suited for bathing and drinking. This gave rise to such local specialties as tansan senbei (soda crackers) and Arima cider. 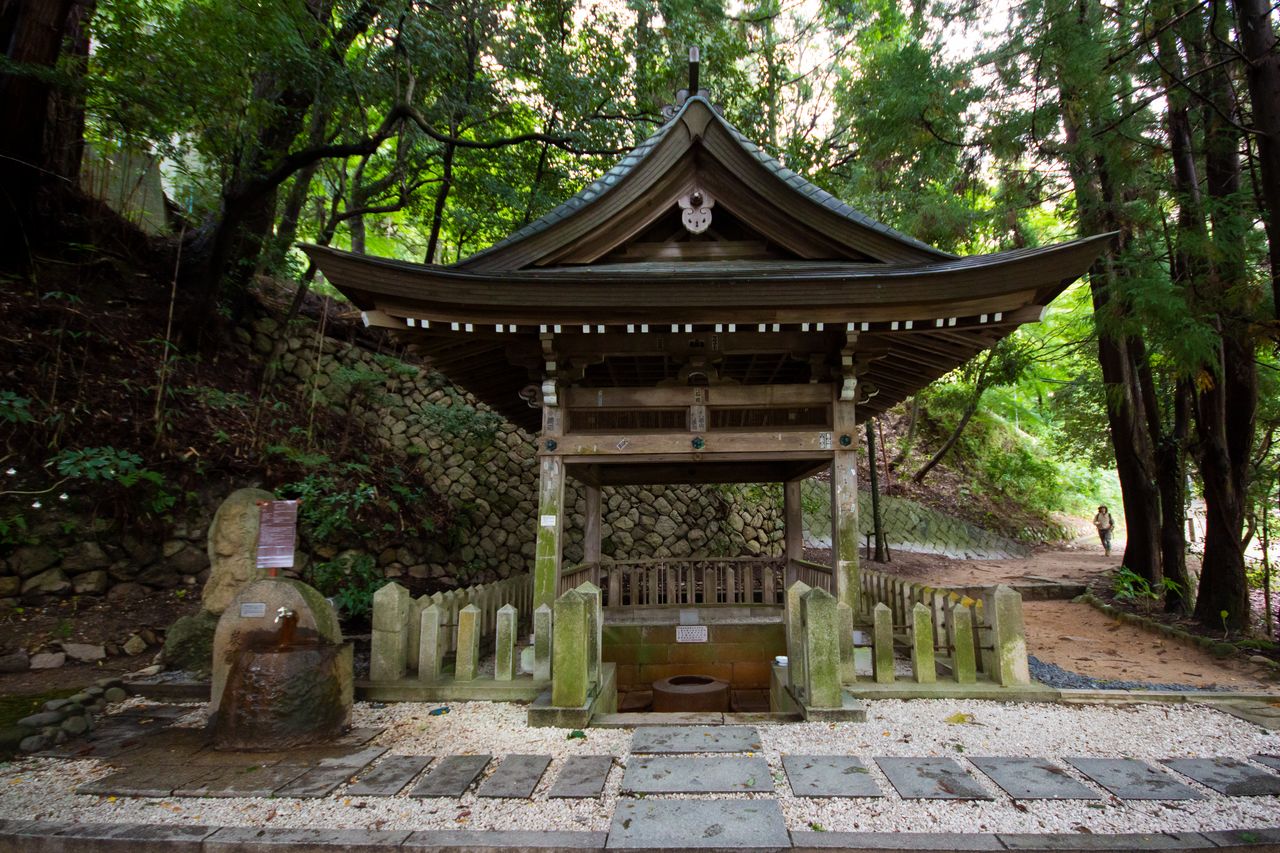 This well produces copious amounts of carbonated water at 18.6°C. 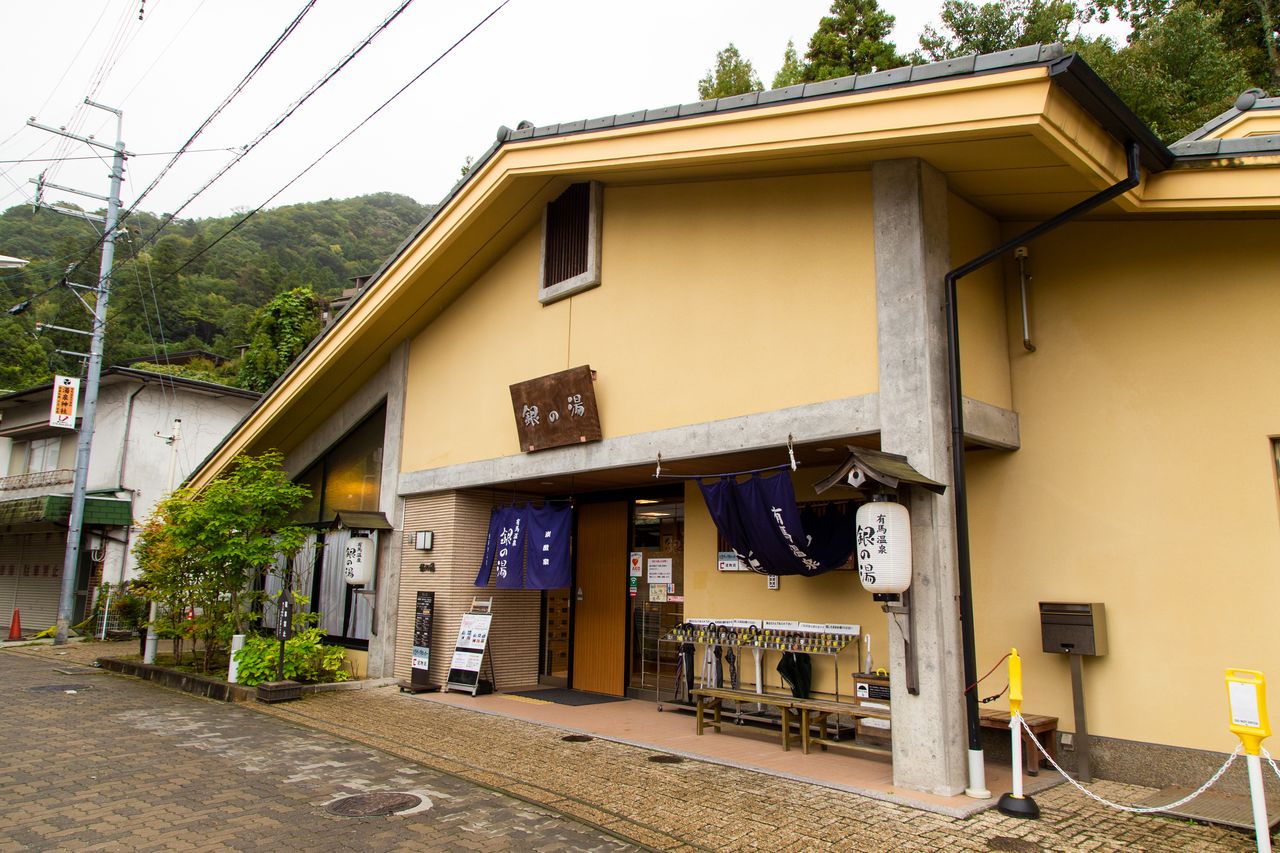 The silver spring is surrounded by many shrines and temples. 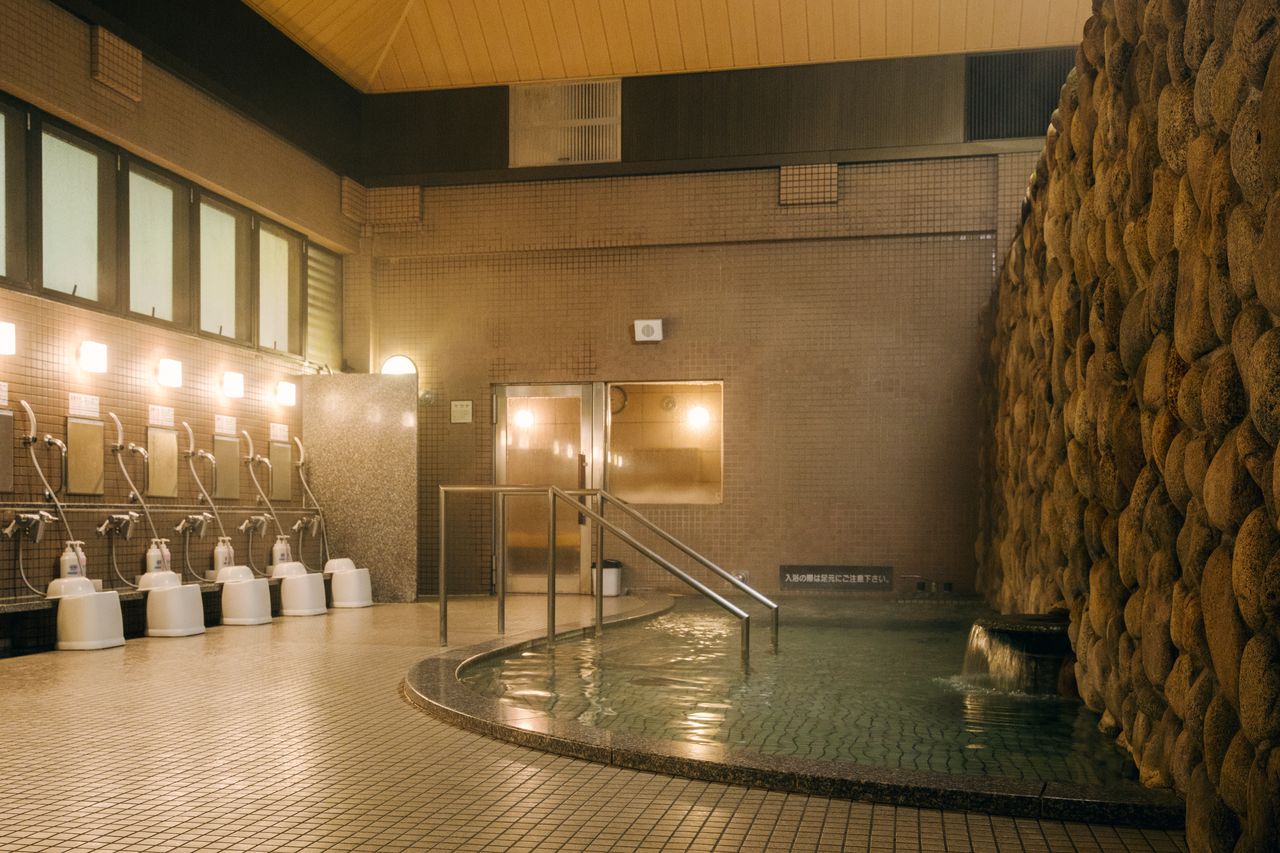 The bathing area in Gin-no-yu allows you to take a long dip in the silver spring, which is renowned for its rejuvenating qualities. (Courtesy Kobe Tourism Bureau)

The two-spa pass is available for ¥850. Both spas provide body wash, two-in-one shampoo/conditioner, and hairdryers for no additional charge. Towels, razors, toothbrushes and other amenities are also available for purchase.

Geiko Café: A Look at the Refined Pursuits of Geisha

Arima is known for being the only place in Hyōgo Prefecture where you can find geiko (another name for geisha). Called to attend banquets at ryokan, geiko perform traditional Japanese dances and ballads and other traditional arts and routines. However, geisha are out of reach to the average tourist, who would not know how much it costs to hire one or what etiquette is expected. Geiko Café Ito, which opened in 2015 with the aim of giving visitors a taste of geisha culture, has attracted attention due to the fact that it allows visitors to meet these artisans during the day. 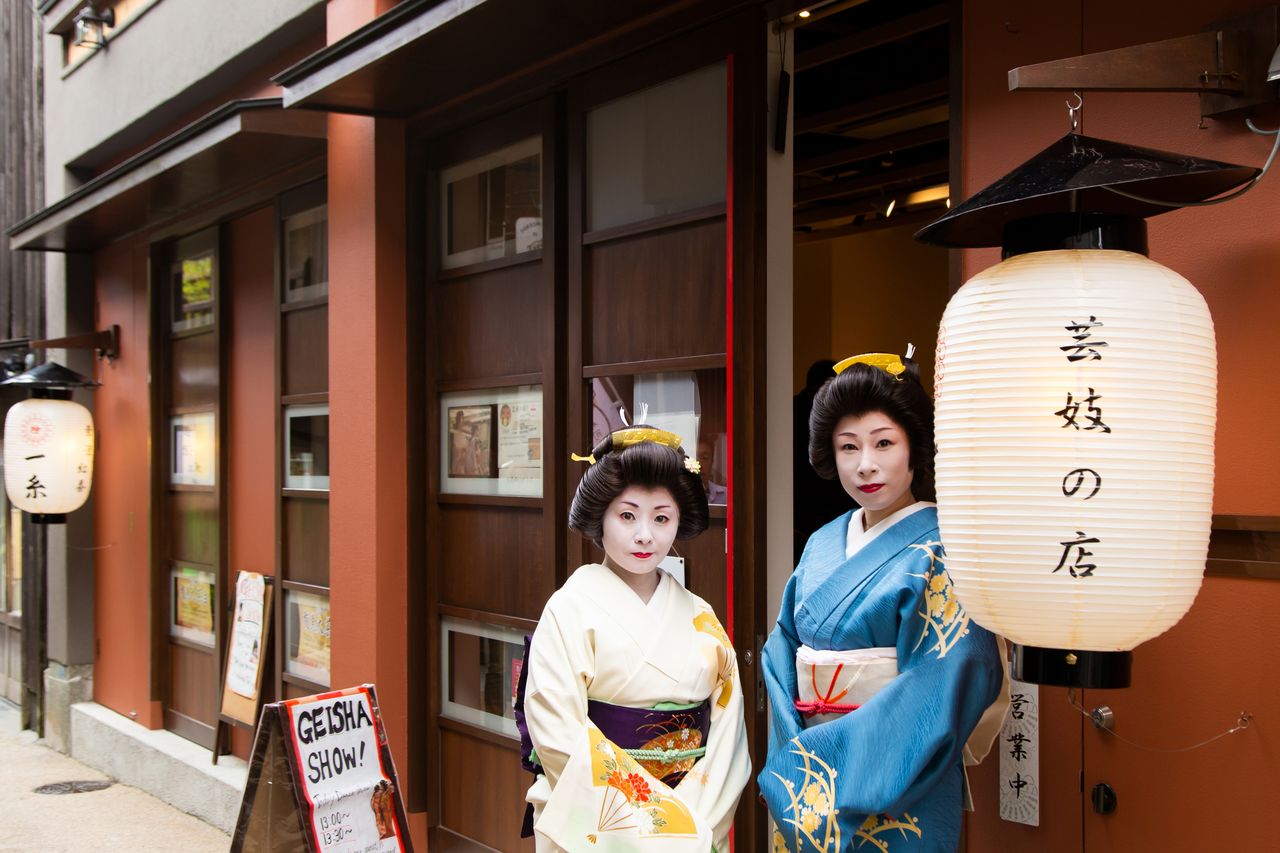 “Unlike in Kyoto, where you usually need an introduction to visit a geisha house, here you can simply have your hotel or ryokan arrange for a geiko to come and entertain you. Many of our customers are actually women—they’re interested in kimono and makeup and ask many questions,” explains Ichimari.

Ichimari also informs us that the café serves green tea, Japanese sweets, coffee and snacks at similar prices to local cafes, allowing customers to chat with the artisans in a way they might never have thought possible.

The café puts on occasional dance and other performances on its purpose-built stage. Customers like the fact that you can have your photo taken with a geiko. 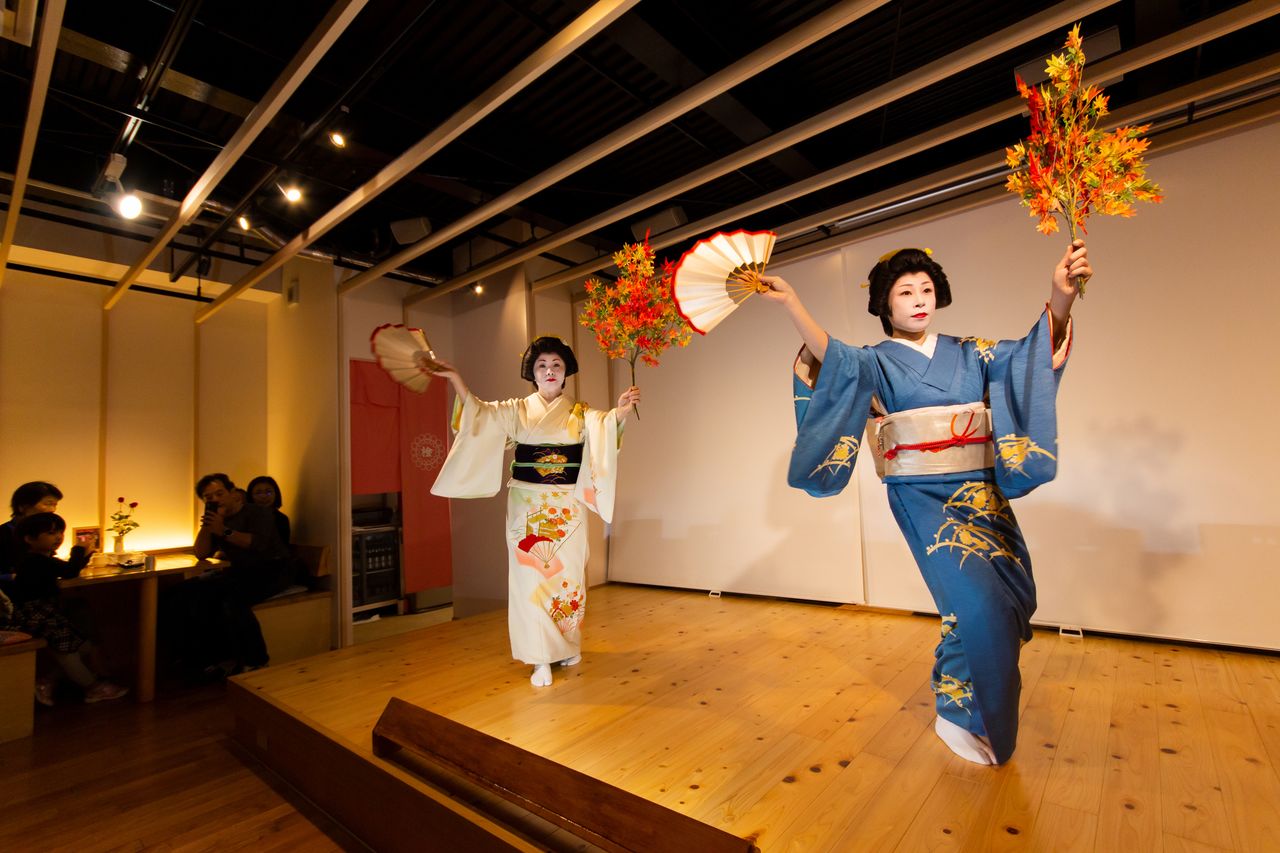 The performances showcase the attractive kimono look and elegant gestures of the geiko.

At Onsenji, initially built by Gyōki and then rebuilt by Ninsai, visitors can book Zen meditation classes and enjoy a course of vegetarian fucha ryōri, which originated in China. The temple Gokurakuji, built by Prince Shōtoku (574–622), is the site where the ruins of Hideyoshi’s Yunoyama palace were discovered. Visitors can enjoy a popular talk on temple treasures by a local history buff and temple supporter.

Visitors are highly recommended to check out Nenbutsuji, built during the Muromachi era (1333–1568). The site on which this temple stands is said to have housed one of the residences of Hideyoshi’s wife Nene. In June 2019, a tea room named Citta was opened in the temple, providing a place for customers to enjoy a coffee or herbal tea while admiring the large sal trees and garden. The stone gate dates back to the 1600s. Particularly popular is the dry curry (¥1,000 plus tax) made by the wife of the former chief priest, who only make 10 servings per day. No water is used to make the curry, which instead is stewed for six hours in the juices of the vegetables and apples that go into it, along with a little wine. 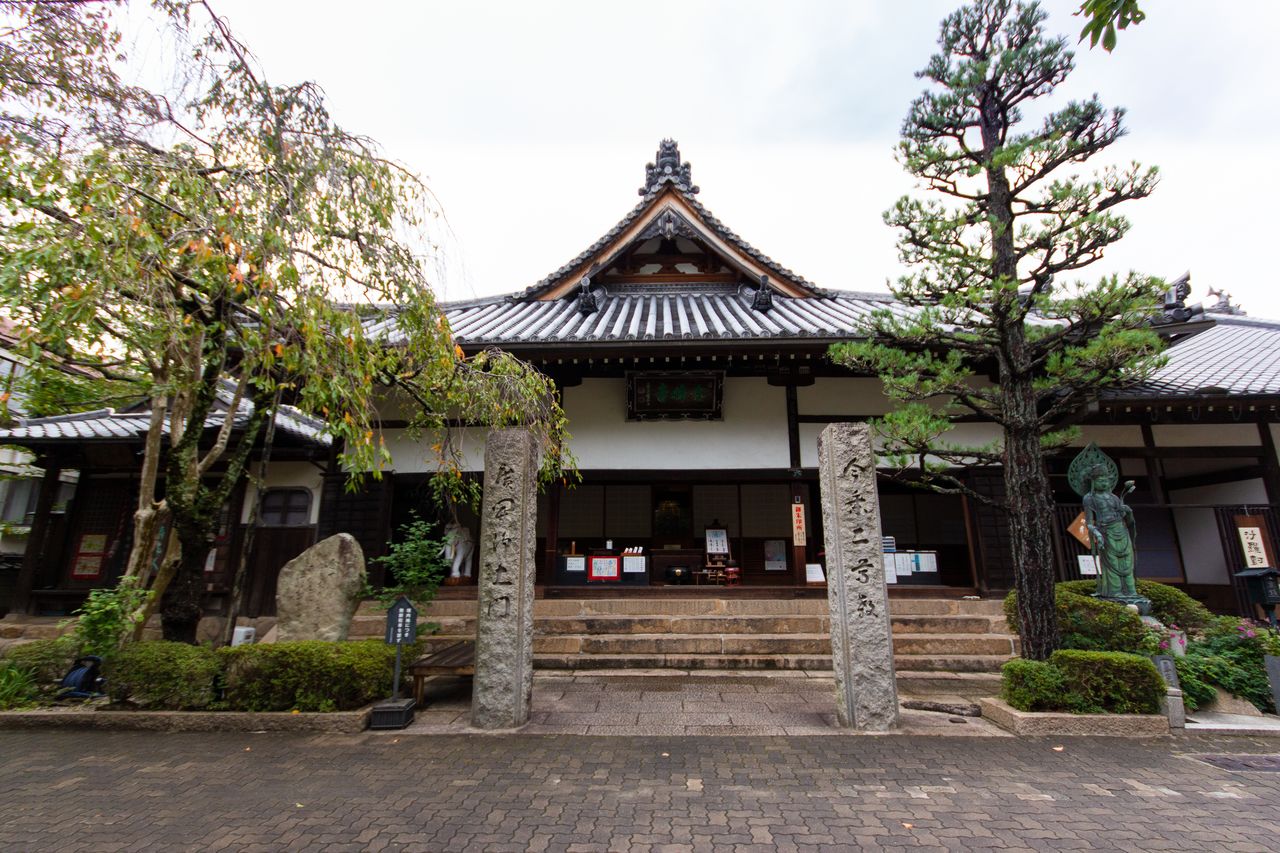 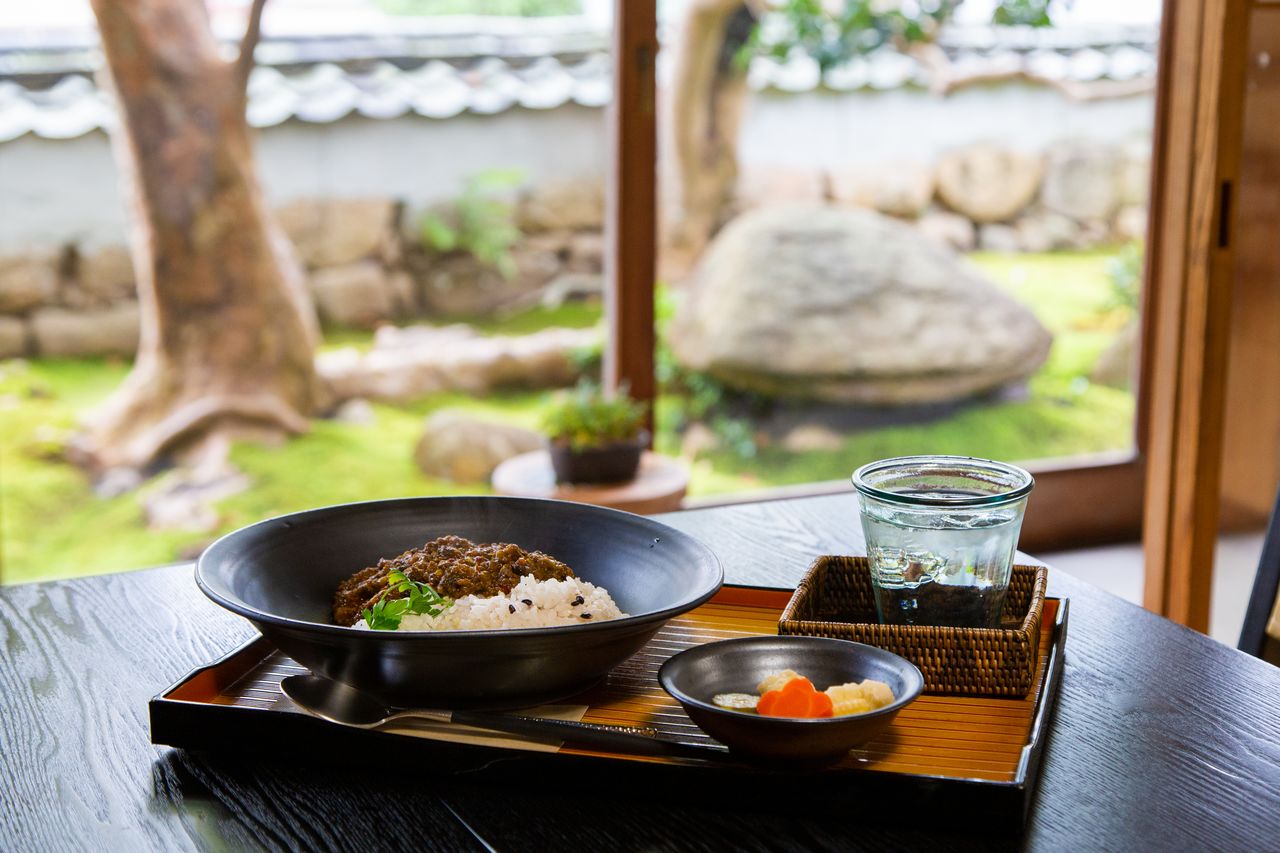 Savor delicious dry curry while looking out over the garden. Even the pickles are homemade.

For those who want to take the scenic route, it is possible to travel to Arima hot Springs via the Rokkō cable car and the Rokkō Arima ropeway. Those who enjoy trekking can climb to the peak of the Rokkō range under their own steam and then soothe their tiredness in the 6-million-year-old waters of the famous thermal spring. 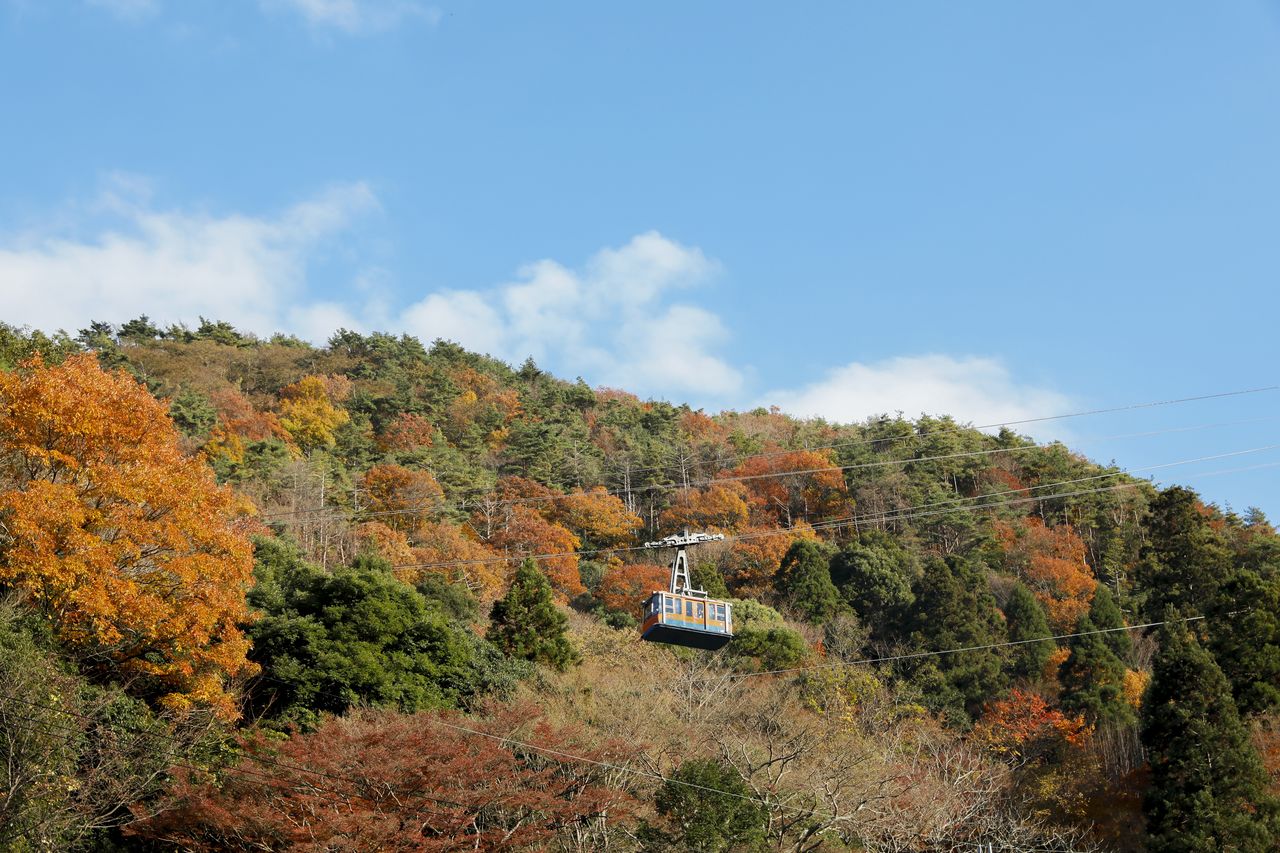 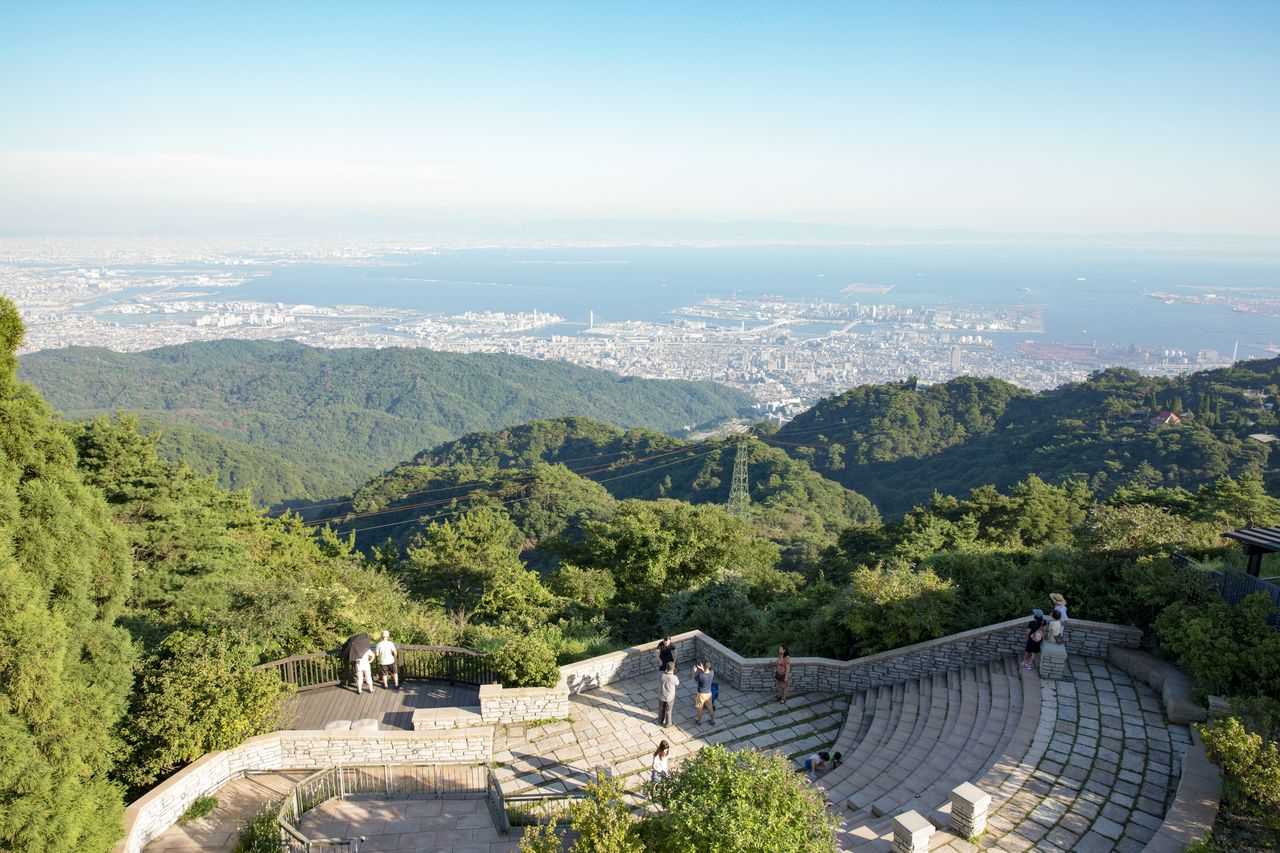 (Originally published in Japanese. Banner photo: The Tenjin spring within Arimaten shrine. Published with thanks to the Kobe Tourism Bureau.)