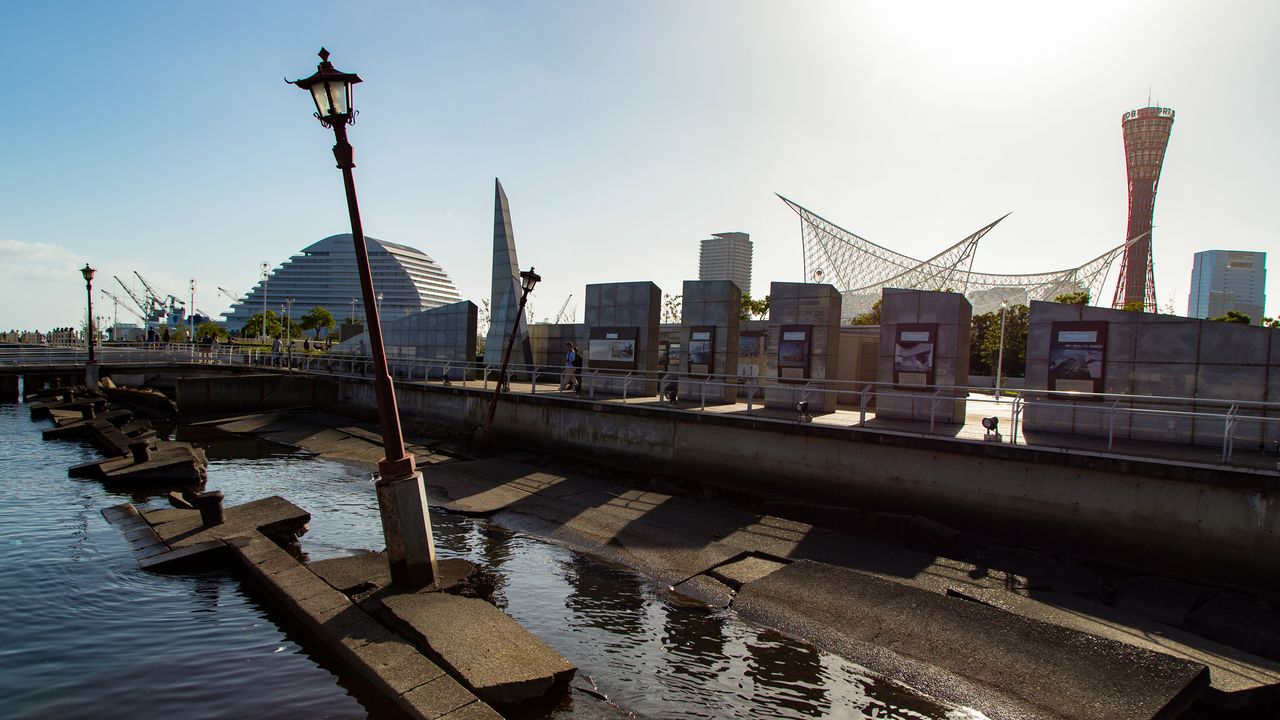 Remembering the 1995 Kobe Quake: Places to Visit in the City

Travel Jan 16, 2020
A quarter of a century ago, Kobe was struck by Japan’s deadliest earthquake in decades. Visitors today can find monuments and memorials to the event dotted around the city.

There is always a long line of people waiting to take their pictures with the giant letters of the Be Kobe Monument, which was installed in the city’s Meriken Park in 2017 to commemorate 150 years since the opening of the port. Among the first cities to be opened to foreign trade in the mid-nineteenth century, Kobe developed a blend of Western and traditional culture, becoming fertile ground for cosmopolitan creativity.

The message “Be Kobe” was devised as an expression of civic pride two decades after the devastation of the Great Hanshin-Awaji Earthquake. January 17, 2020, marks 25 years since the disaster. 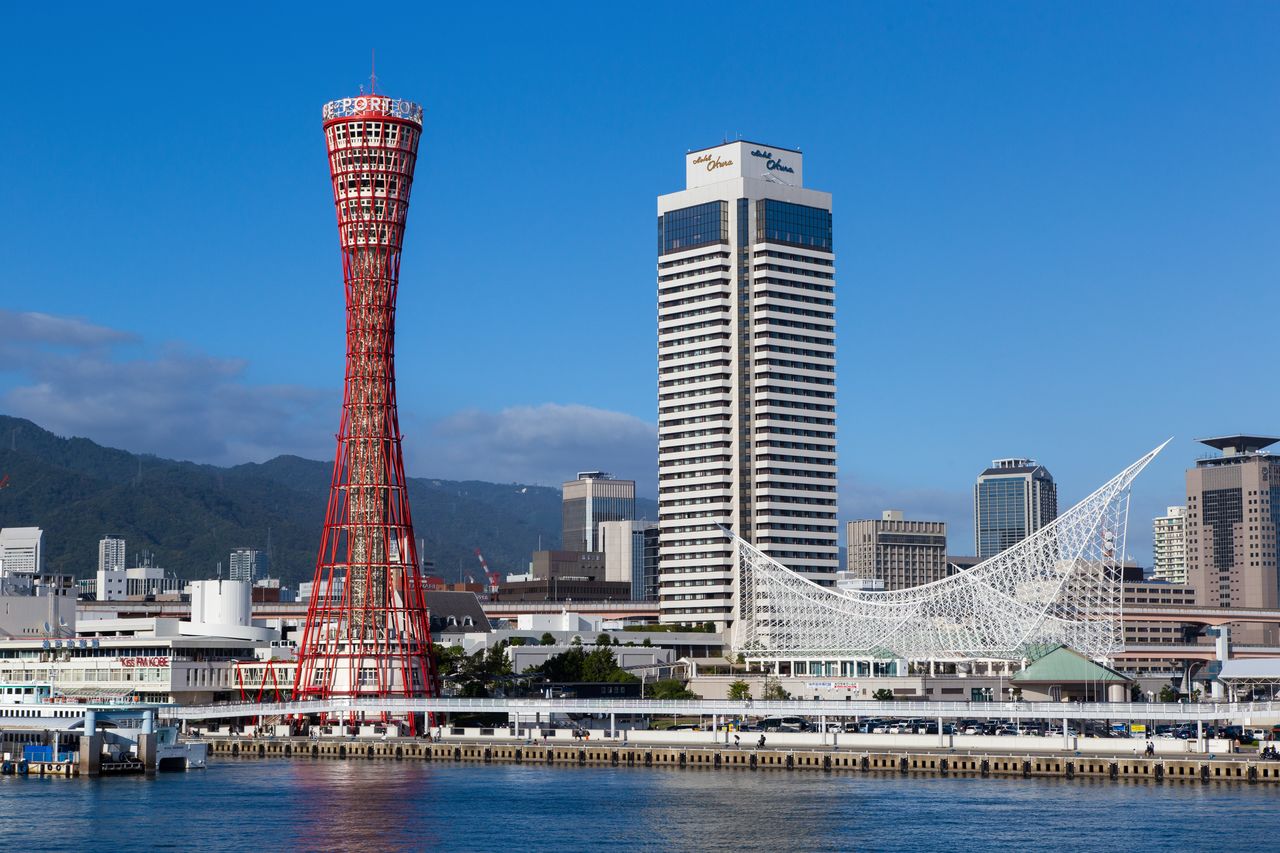 The red Kobe Port Tower (left) is a local landmark; Kobe Maritime Museum (right), with its swooping arched roof, suggests the form of a sailing ship crossing the waves. 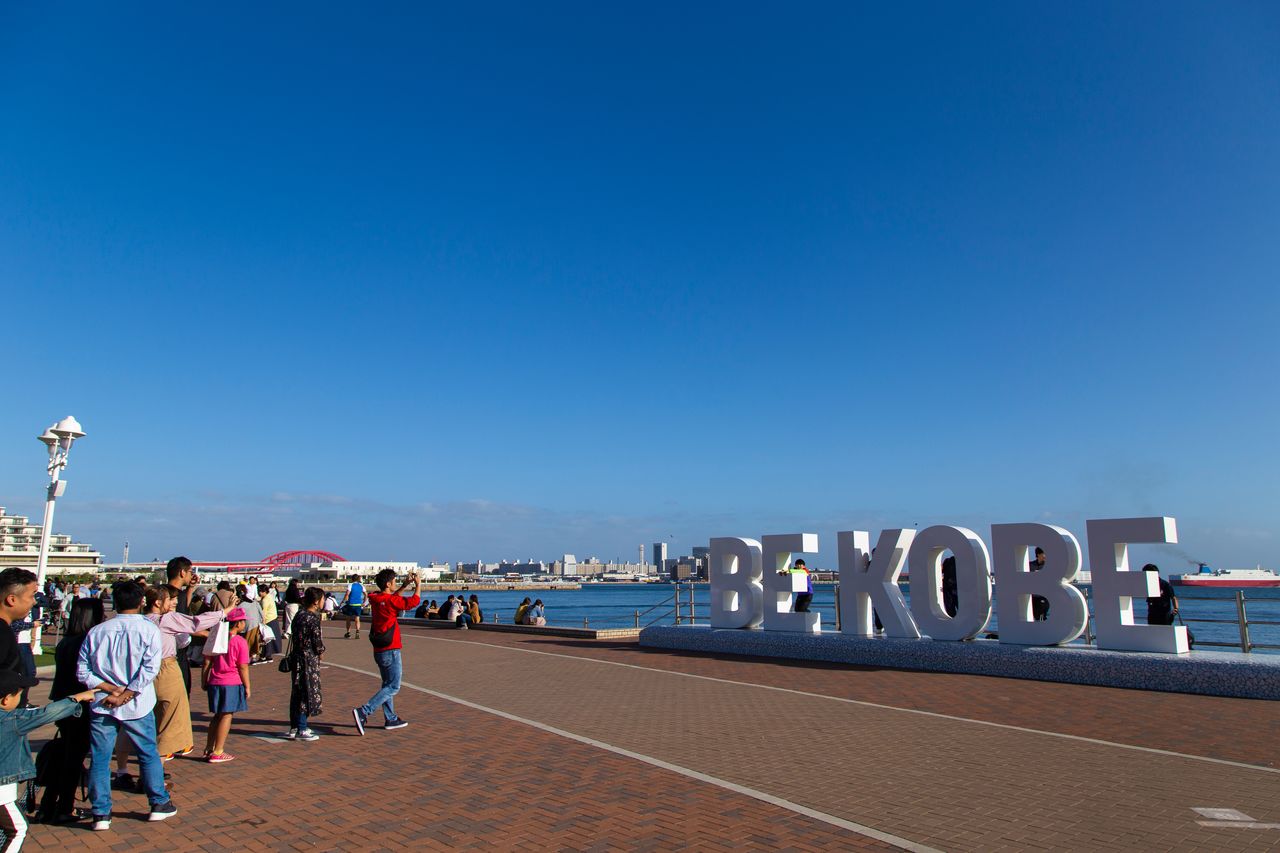 Visitors wait to take a creative shot at the Be Kobe Monument.

Near the Be Kobe Monument, the Earthquake Memorial Park preserves some 60 meters of the damaged wharf wall. To one side, models, video footage, and photographs provide further testimony of the scale of the disaster’s impact on the port and the efforts toward recovery. 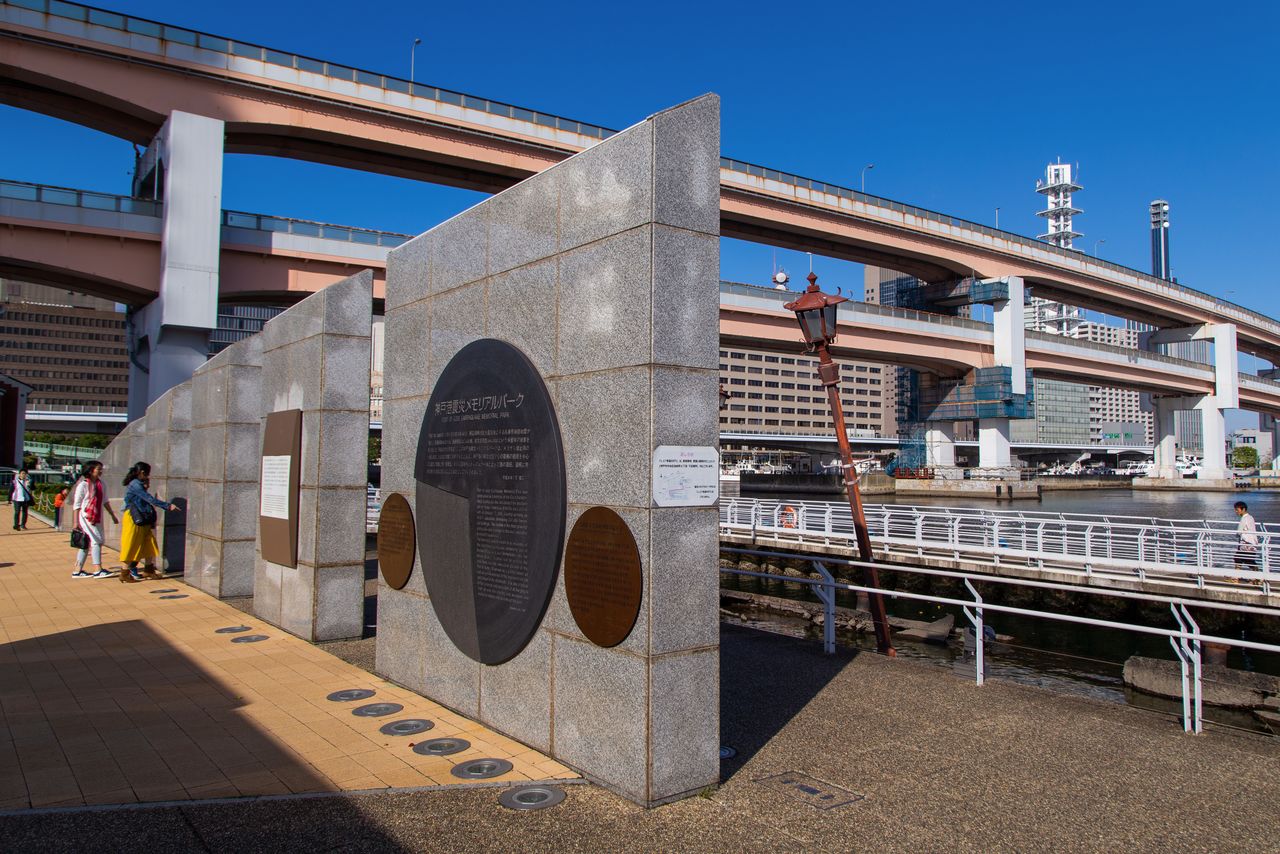 The Earthquake Memorial Park located to the northeast of the Be Kobe Monument. 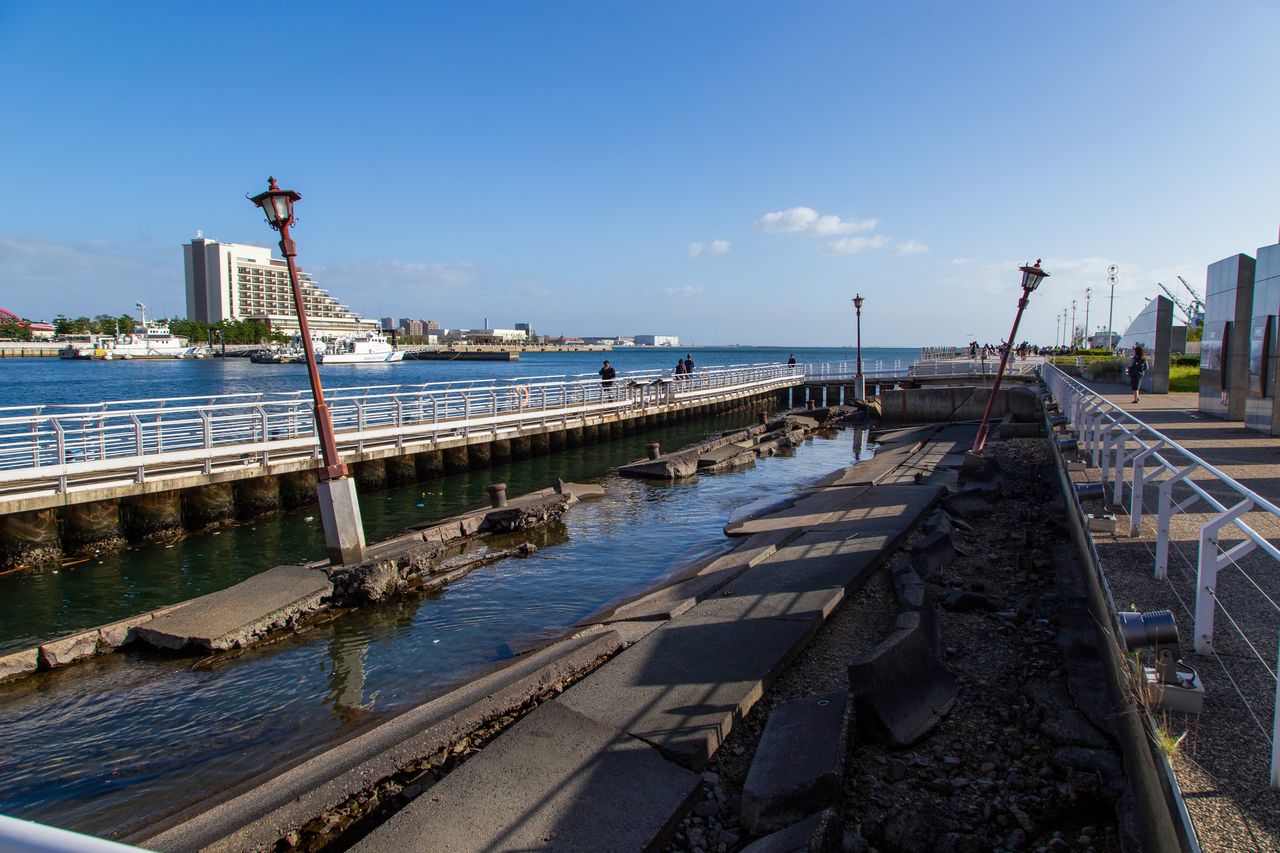 The Meriken waterfront was built in 1868. During the 1995 disaster, the land sank, causing flooding. 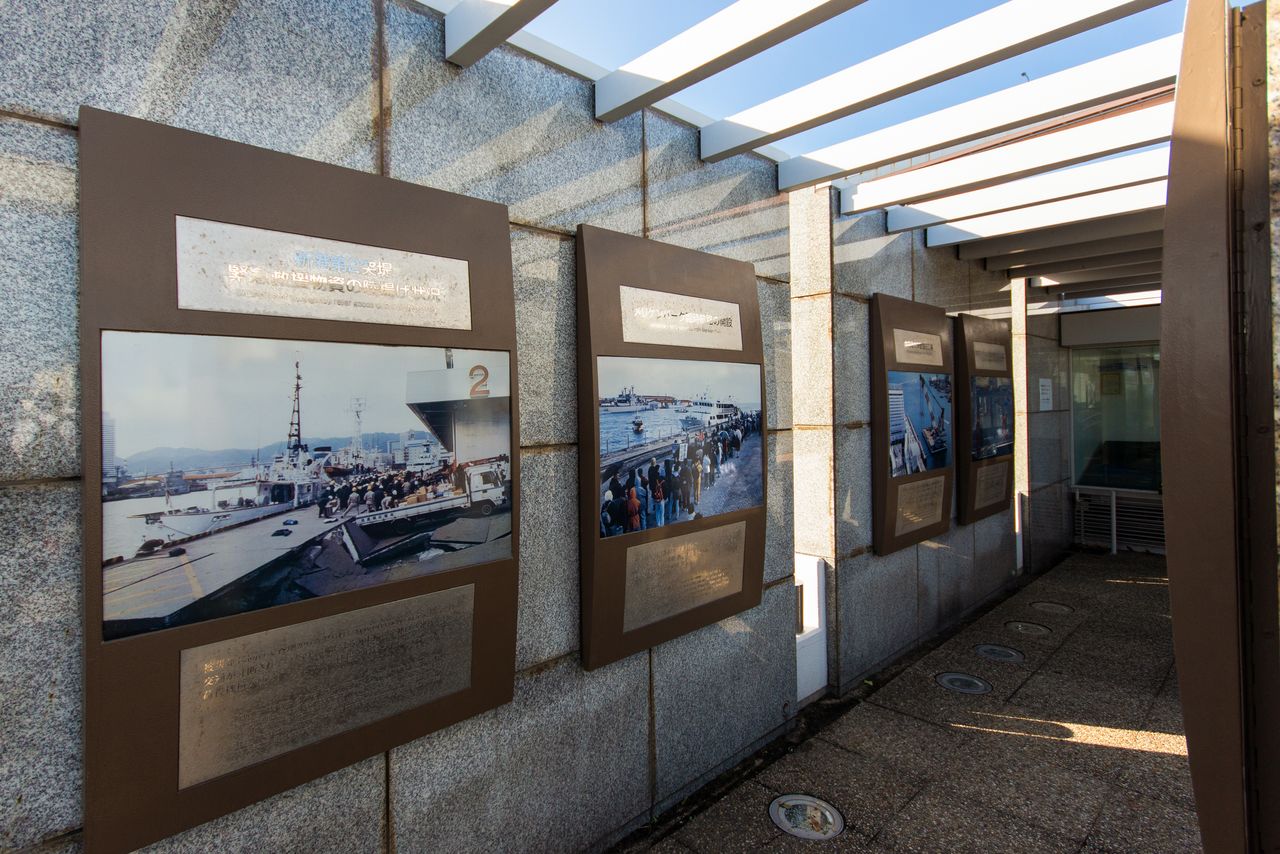 Displays detailing the effect of the disaster and recovery efforts.

A Shock to Postwar Japan

The Great Hanshin-Awaji Earthquake struck at 5:46 in the morning on January 17, 1995, and was the first major temblor to take place beneath an urban area in postwar Japan. It measured the maximum 7 on the country’s intensity scale, killing 4,751 people within the city and injuring almost 15,000. It also fully or partially destroyed over 120,000 structures, while 7,000 more were damaged by fire. Footage of toppled highways, collapsed office and residential buildings, and flames spreading through the city shocked the nation. 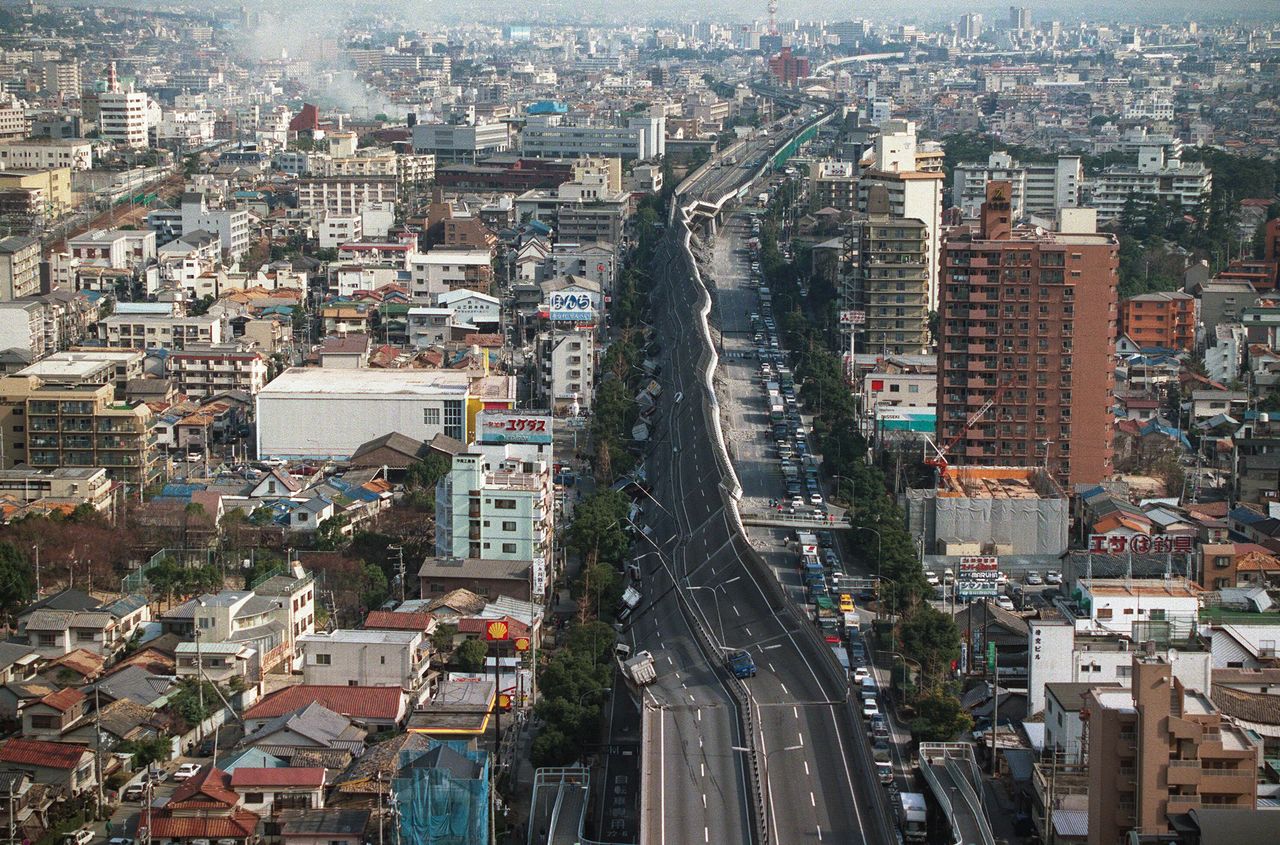 Part of the collapsed Hanshin Expressway in Kobe. (© Jiji)

Kobe today has recovered handsomely to the point one might not realize it had undergone disaster 25 years ago. Yet monuments, facilities, and buildings dotting the city continue to relay the damage of the earthquake and the importance of preparing for such events. Paying a visit to these locations is another way to appreciate Kobe and its history.

The Shōsen Mitsui Building is one such place. The Western-style stone structure, which was built in one of Japan’s early foreign settlements, escaped serious damage in the disaster. Away from its elegant front view, the back of the building tells another story. A framework of thick steel illustrates how this historic structure was able to stand up to the force of the earthquake. 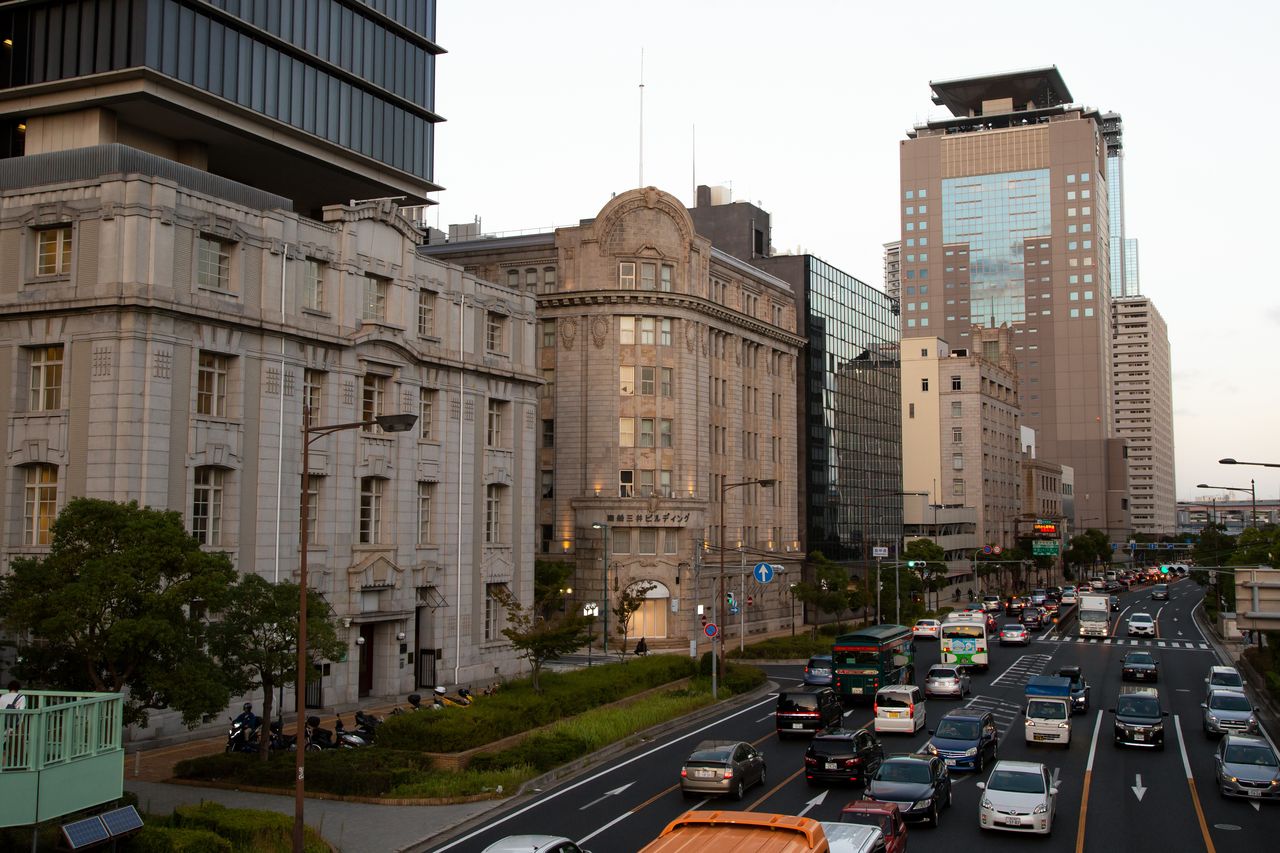 The Shōsen Mitsui Building was completed in 1922. 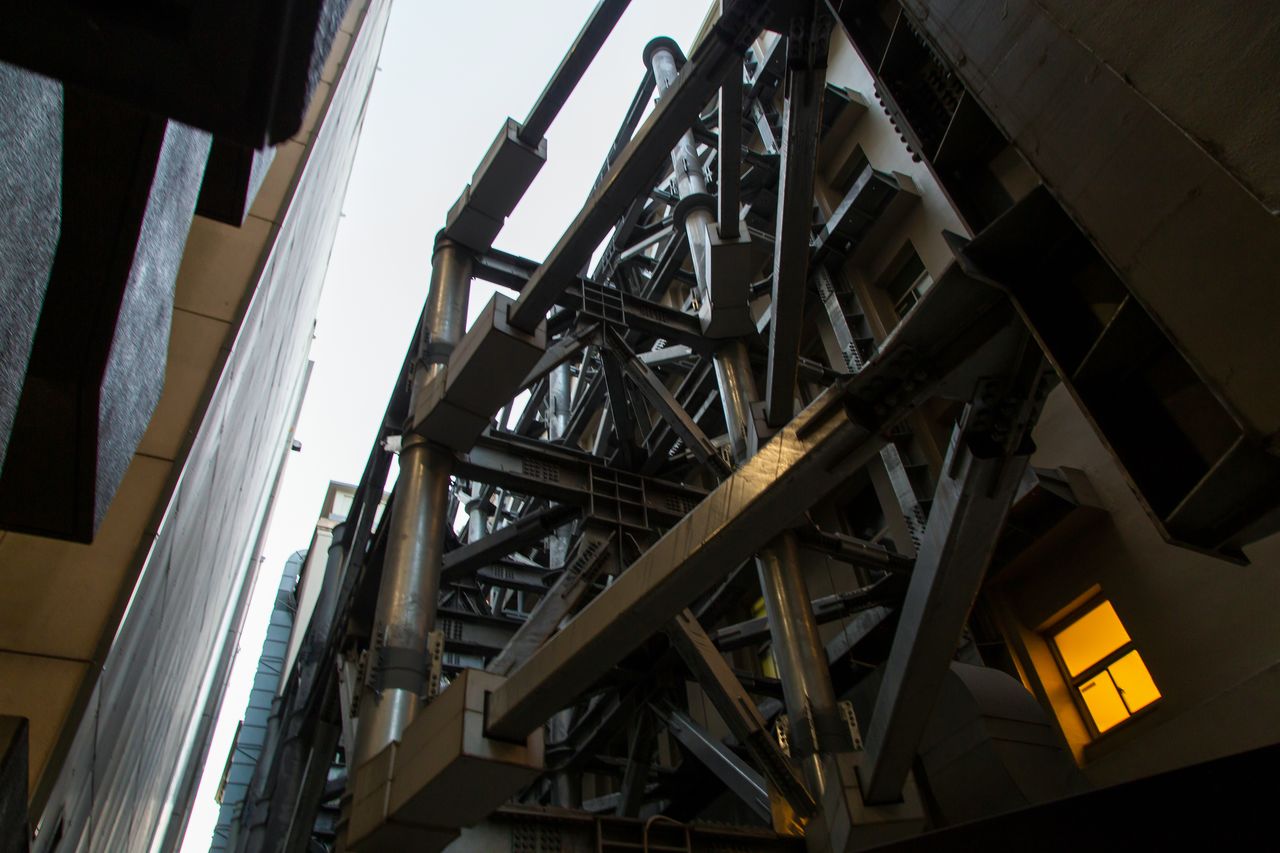 A steel frame behind the building provides earthquake-proofing support.

On the pavement beside National Route 2, pier supports and joining materials from the damaged Hamate Bypass remain as monuments. The Hyōgo National Highway Office installed them as a palpable reminder of the need to build safe and disaster-resistant roads. 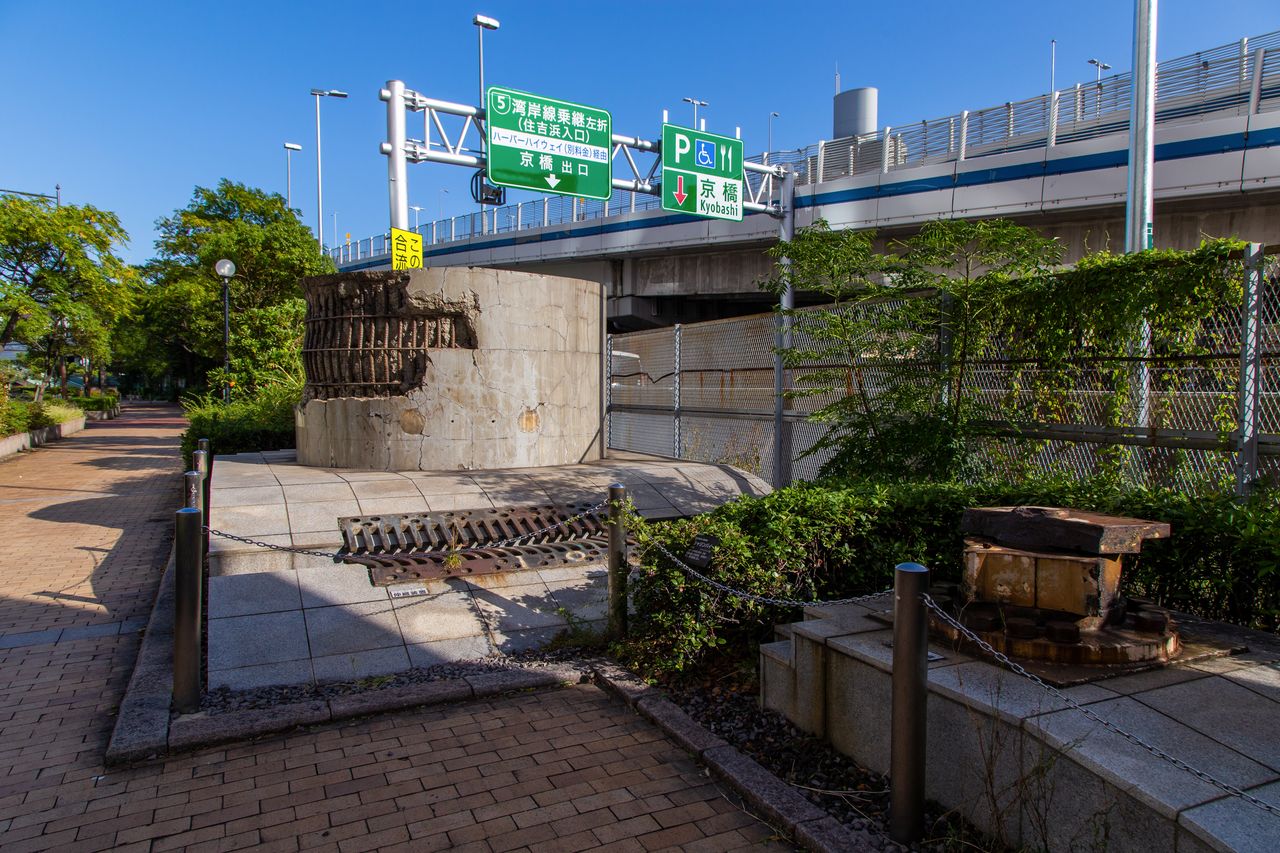 Damaged road sections show the power of the 1995 quake.

A number of memorials and monuments can be found in East Park beside Flower Road in the lively downtown district of Sannomiya. This lies to the south of Kobe City Hall, one of whose buildings might itself be called a monument to the disaster.

The intense shaking led to the collapse of the sixth story of the eight-story Number 2 building. Following the earthquake, the media repeatedly touched on how things could have been much worse if it had taken place during working hours. After the top three floors were removed, the building returned to use—as it remains up to the present day. Passers-by may not be aware of its extraordinary history. 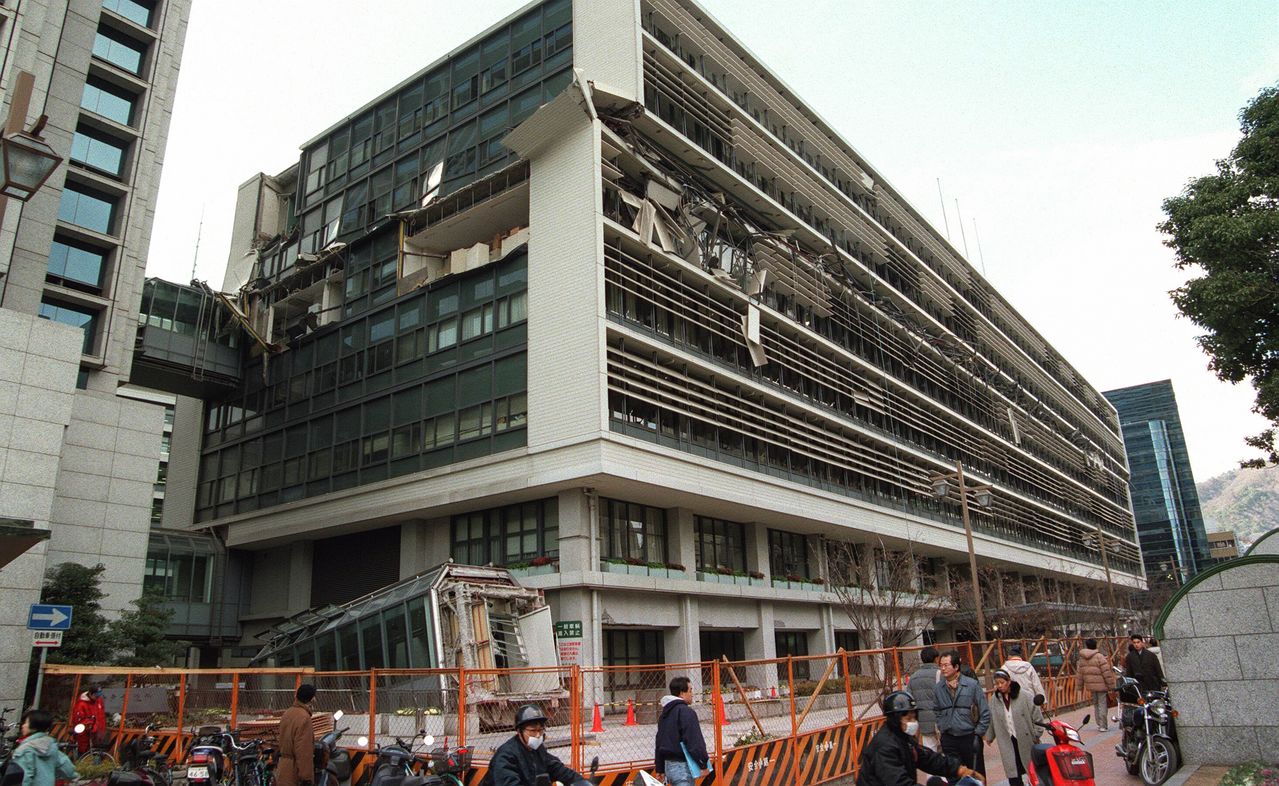 The Number 2 building of Kobe City Hall with its pancaked sixth floor. (© Jiji) 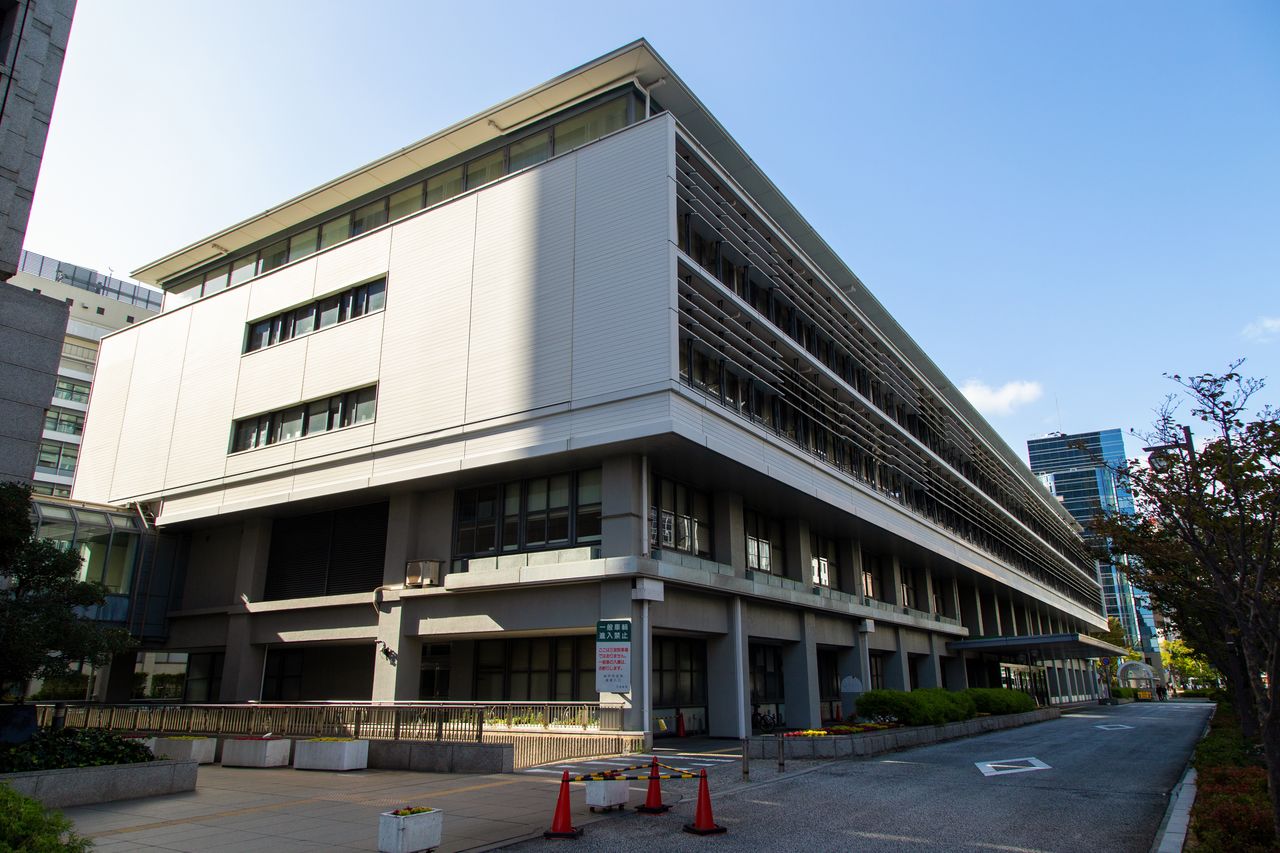 The Number 2 building today, in use as a five-story building.

In the north of the park, the gilded Marina statue holds a clock. The hands have been fixed at 5:46 since the statue fell at the time of the earthquake. Instead of telling Kobe’s people the time, it reminds them of the calamity that struck their city. 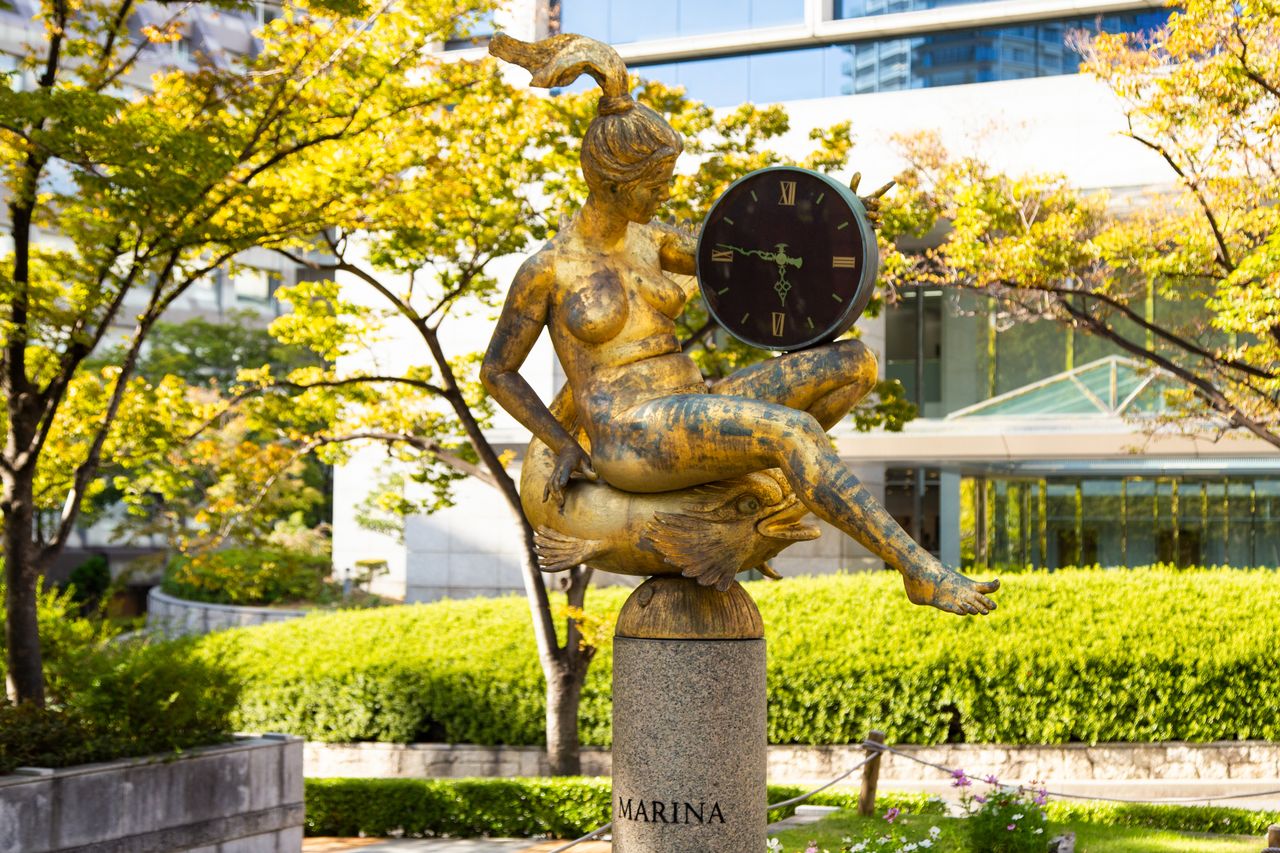 The Marina statue fell when its pedestal collapsed in the earthquake.

Cracked walkways and damaged flower beds are among features preserved in the park. A monument dedicated to remembering victims and reconstruction, built through citizen donations, catches the eye. Underground is a space for contemplation, where light travels through the glass ceiling and water above to illuminate etched names of victims. 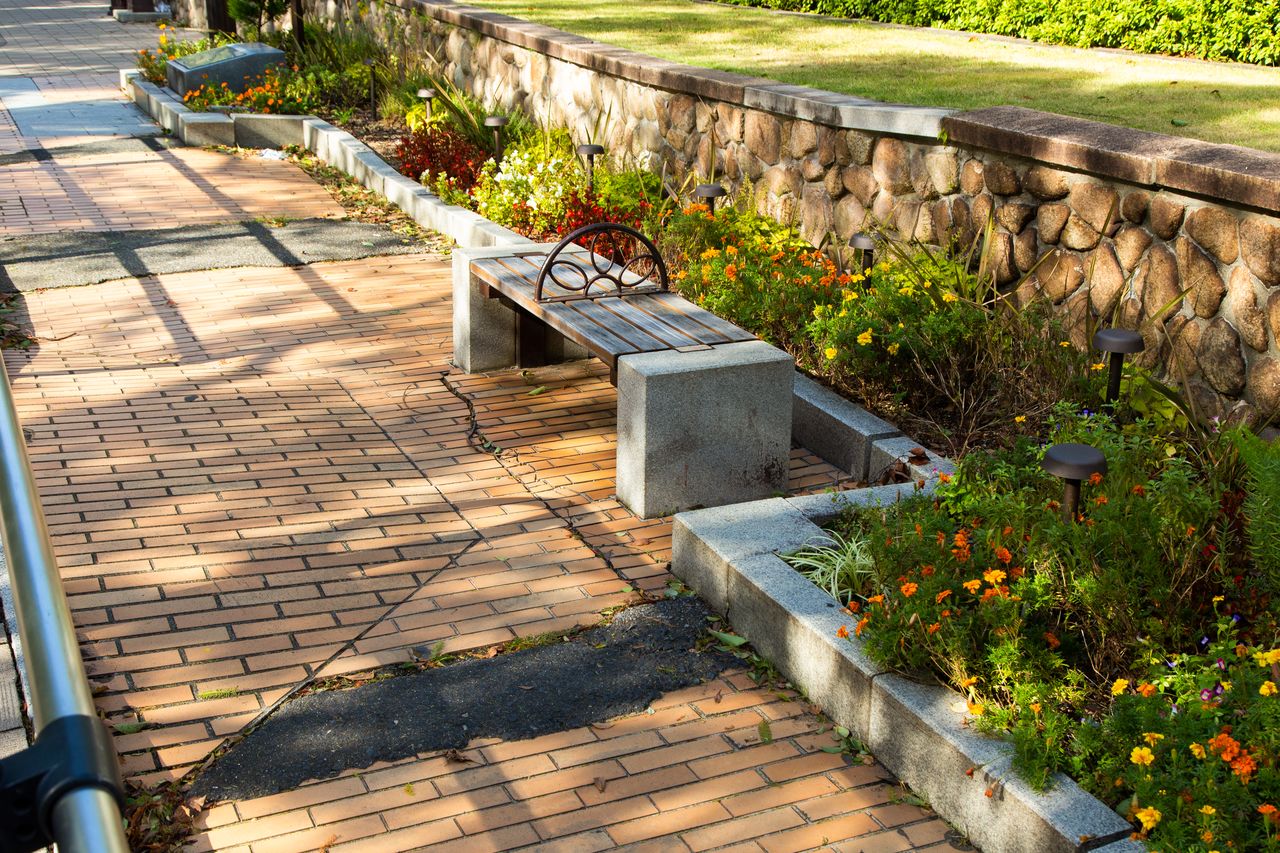 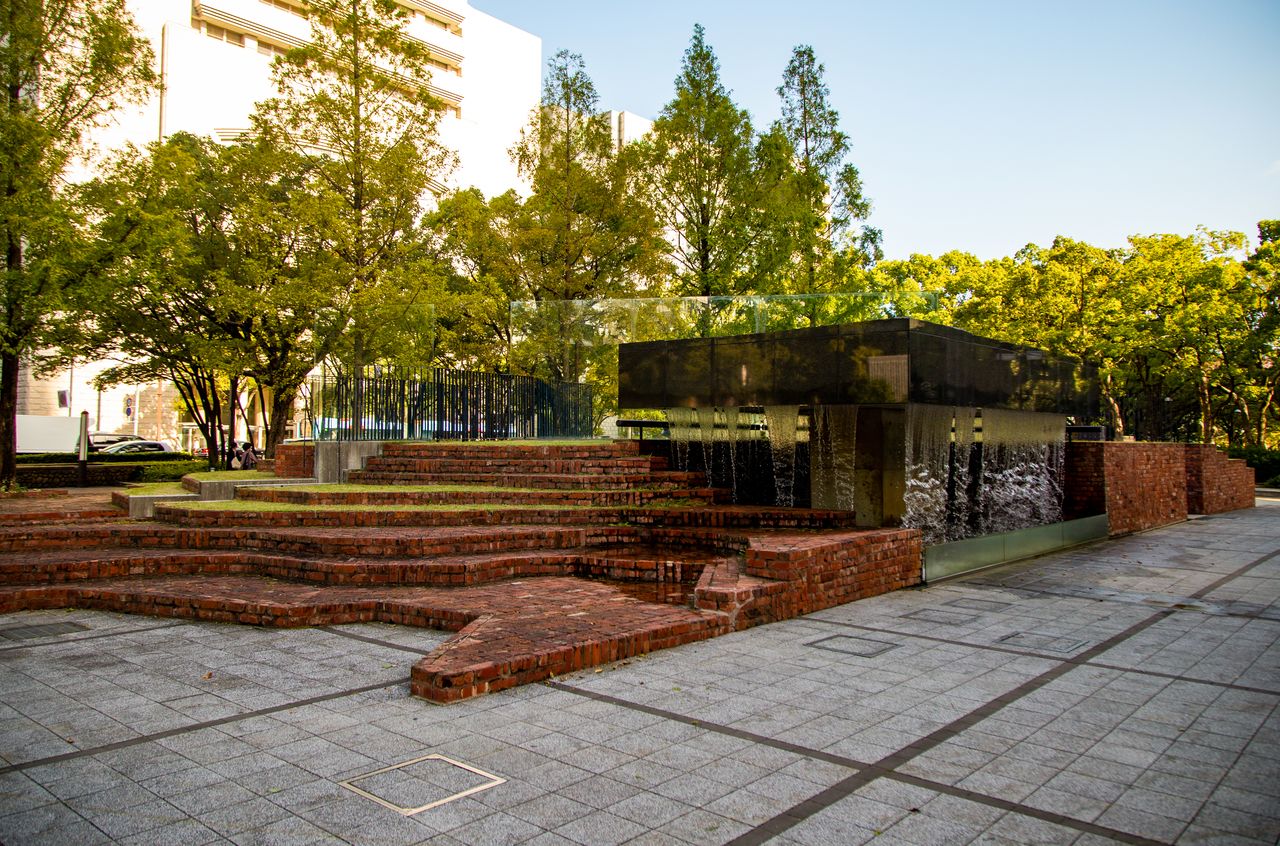 A memorial built through citizen donations. 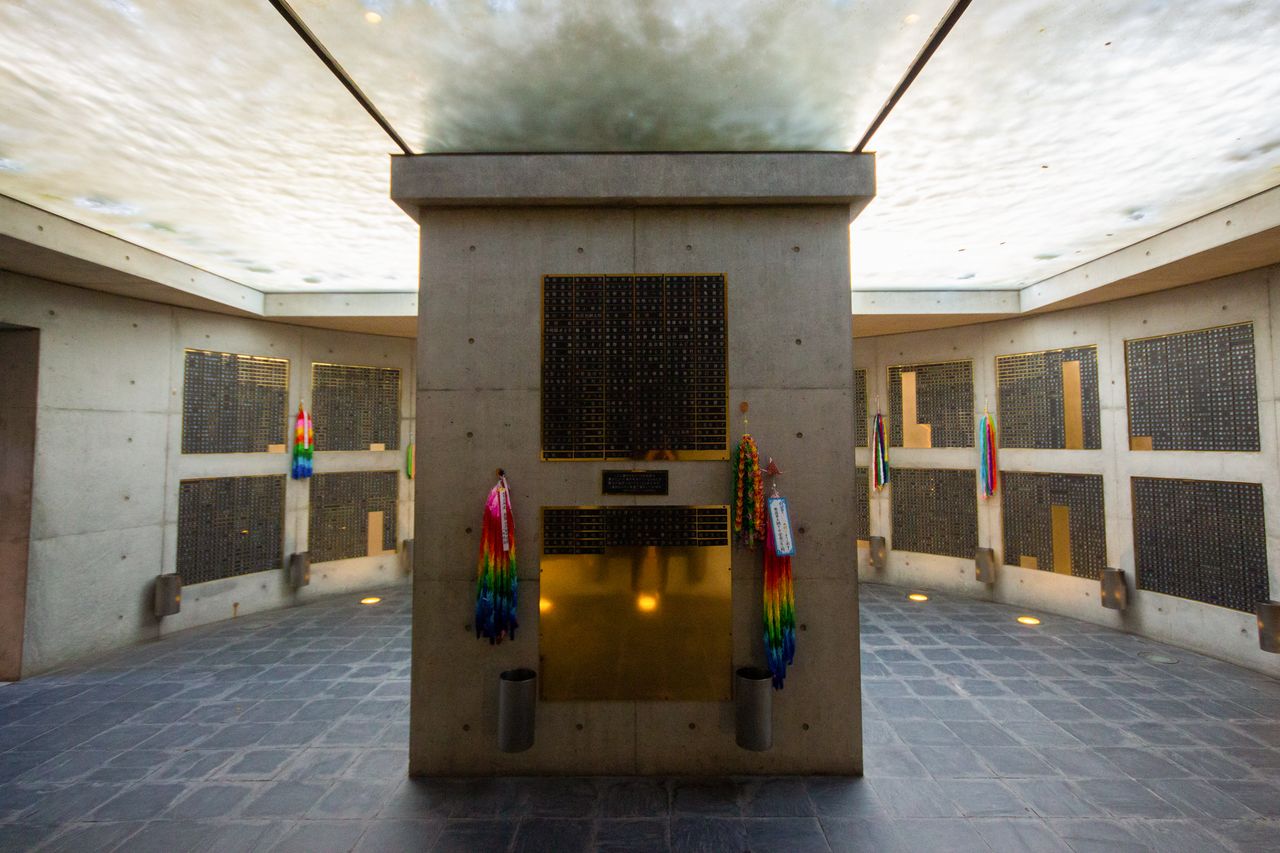 Near the monument, a “flame of hope” commemorates the disaster. It is said to incorporate flames taken from 10 cities and 10 towns that were affected, as well as all 47 prefectures of Japan. Civic groups and volunteers conduct a ceremony here every year on the January 17 anniversary. 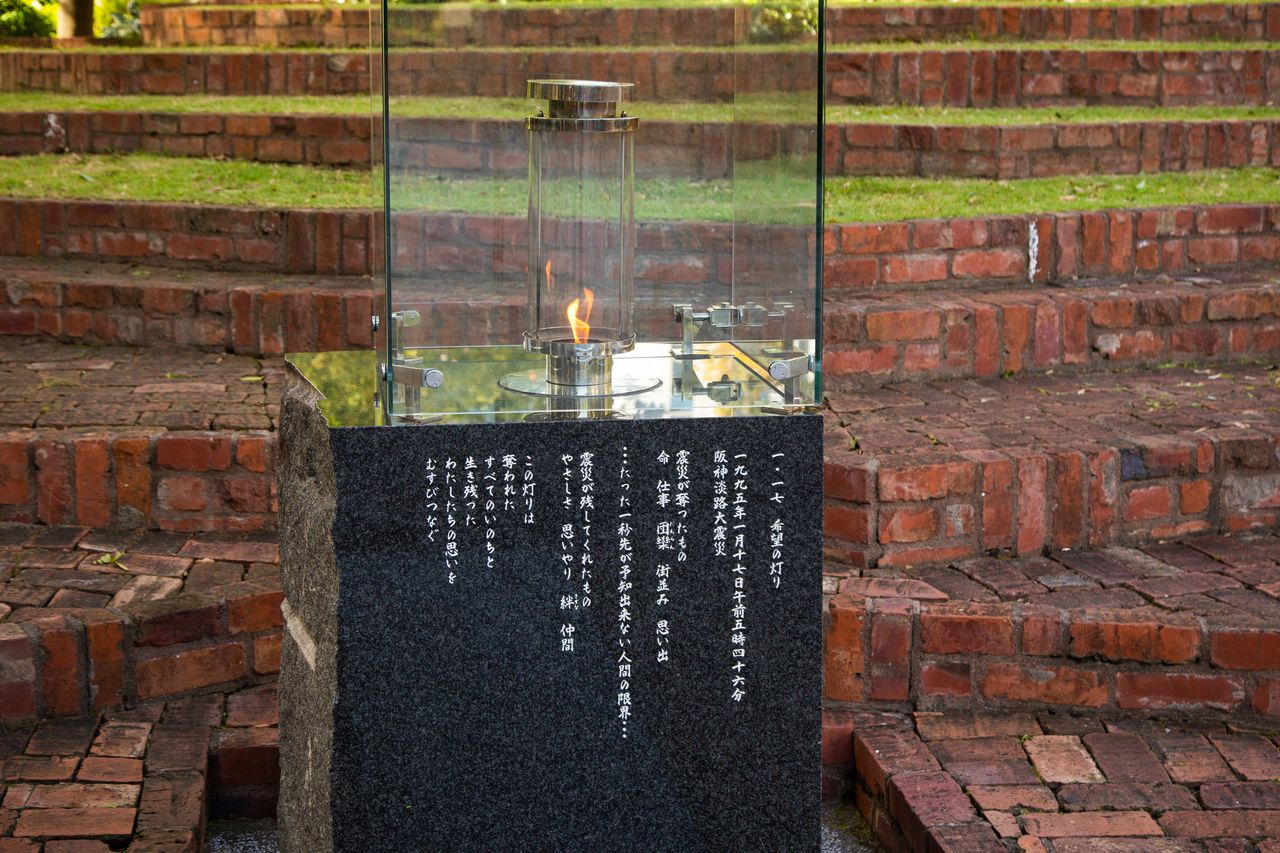 Volunteers clean the flame monument on the seventeenth day of each month.

Those who wish to know more about the disaster and recovery should visit the Great Hanshin-Awaji Earthquake Memorial Museum. Opened in April 2002, this facility offers activities to learn how it feels to experience an earthquake and what to do if one happens. 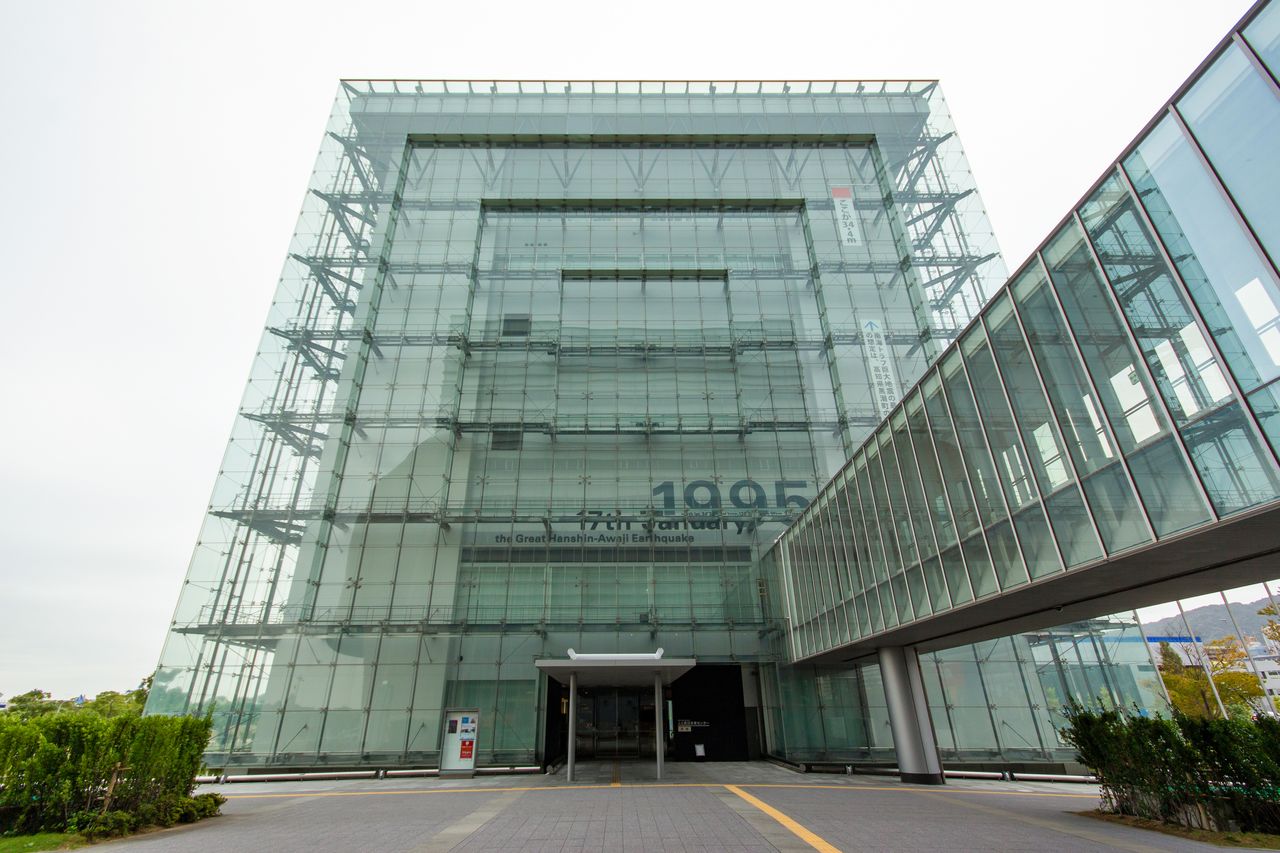 Visitors can experience the force of the 1995 quake on the big screen and through full-size dioramas, and see how citizens lived and what volunteers did in the aftermath of the disaster through exhibits of photos, materials, and models. There are comparisons with the 2011 Great East Japan Earthquake and estimates of the damage that would be caused by a hypothetical Nankai Trough temblor. There is also the chance to gain practical knowledge about how to react to and mitigate the worst effects of earthquakes. 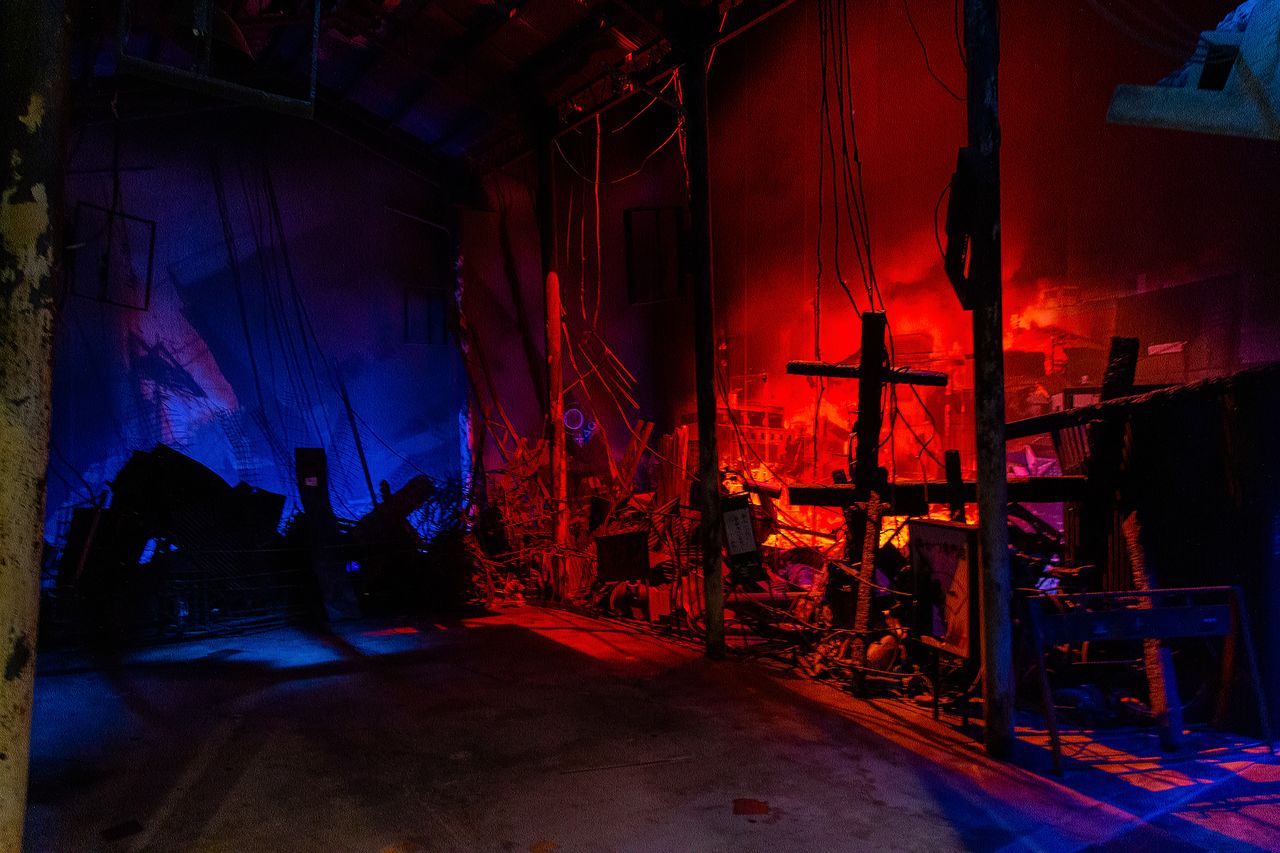 A life-size diorama re-creates city streets immediately after the disaster. 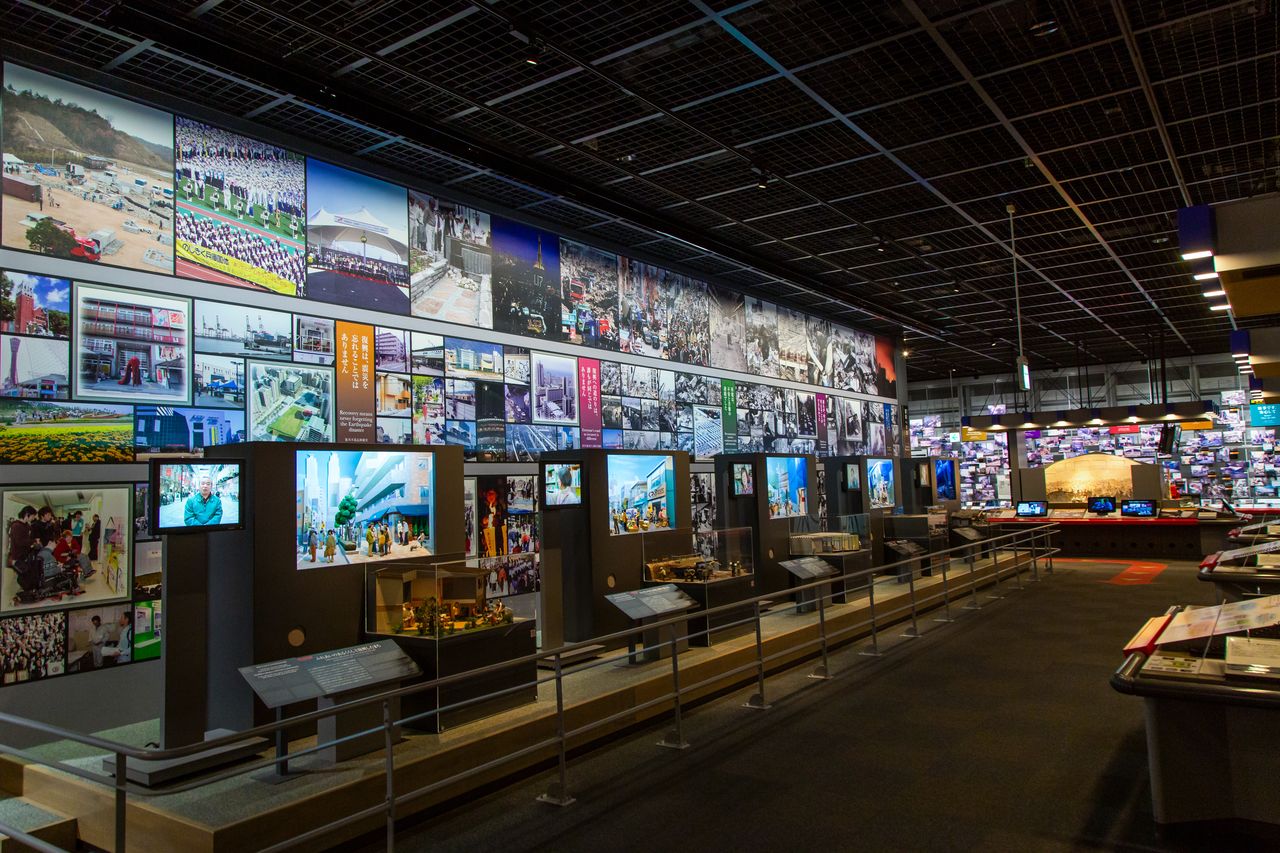 Many photographs and models are on display on the third floor. 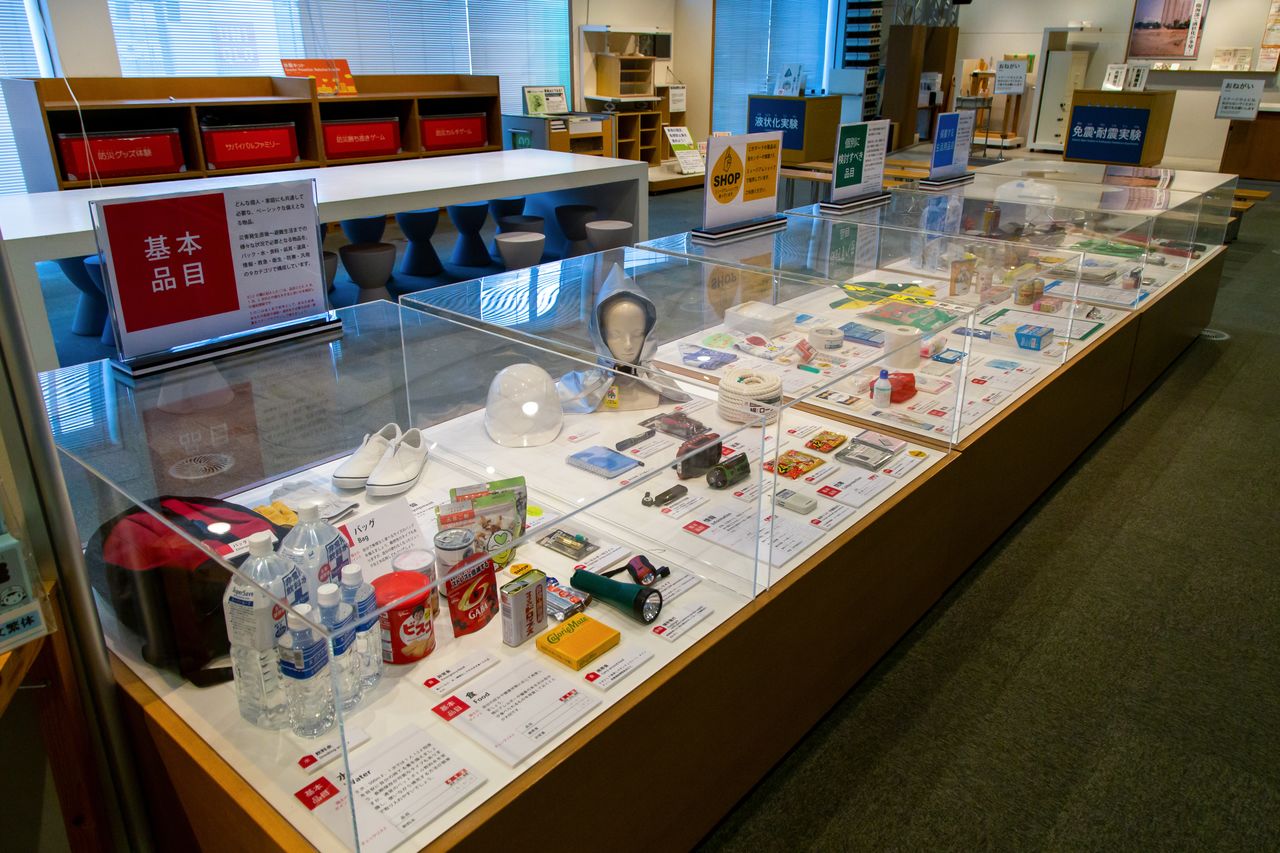 The second floor exhibits disaster preparation goods and information about disasters around the world. 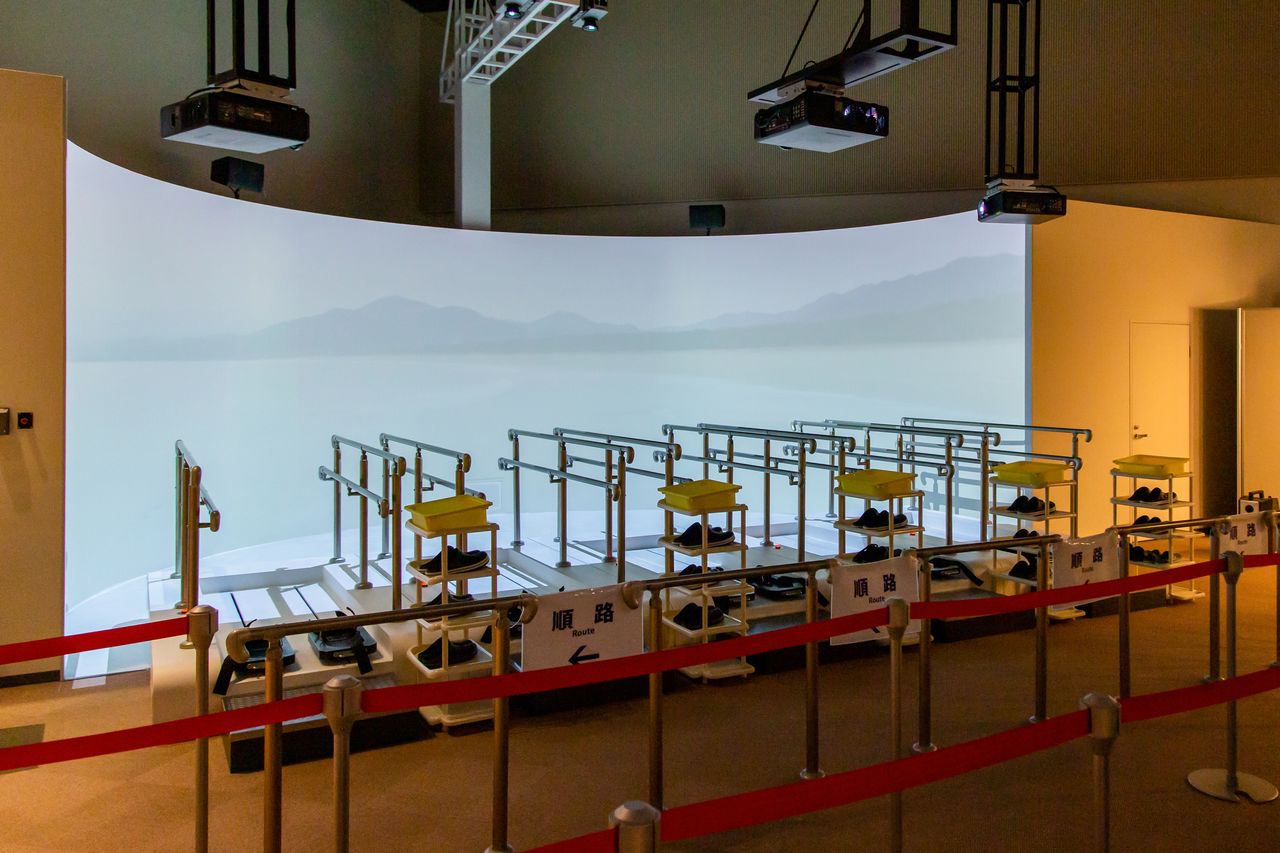 A simulator lets visitors experience how difficult it is to walk against the pressure of water. 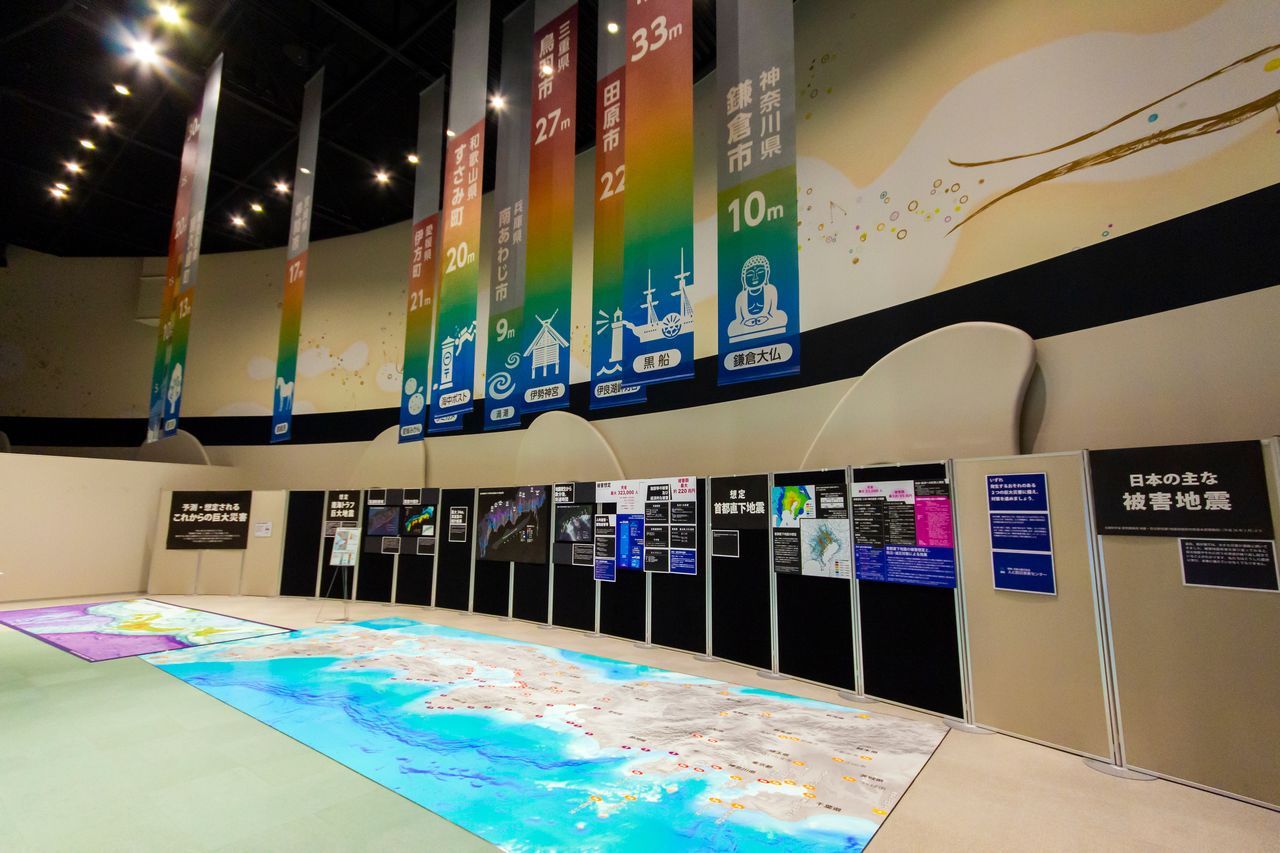 This exhibit shows expected damage from an earthquake in the Nankai trough or directly beneath Tokyo.

The Disaster Reduction and Human Renovation Institution, in which the museum is found, has collected more than 190,000 primary records of the earthquake including photographs, objects, and the testimony of those who experienced it. Among the displays are pictures of collapsed houses, a golf club bent in half, plush toys sent from overseas, and written accounts of area residents living in evacuation centers. Beside them are the comments of the people who donated them to the museum. One senses the fear, sorrow, anger, and hope of the survivors.

The number of people who stepped forward to offer help led to 1995 being dubbed “year one” for volunteering in Japan. Many volunteer groups and nonprofit organizations applied their experience in Kobe to later disasters like that in 2011. Monuments dedicated to the Great Hanshin-Awaji Earthquake around Kobe encourage visitors to think more about disasters and how to prepare for them. 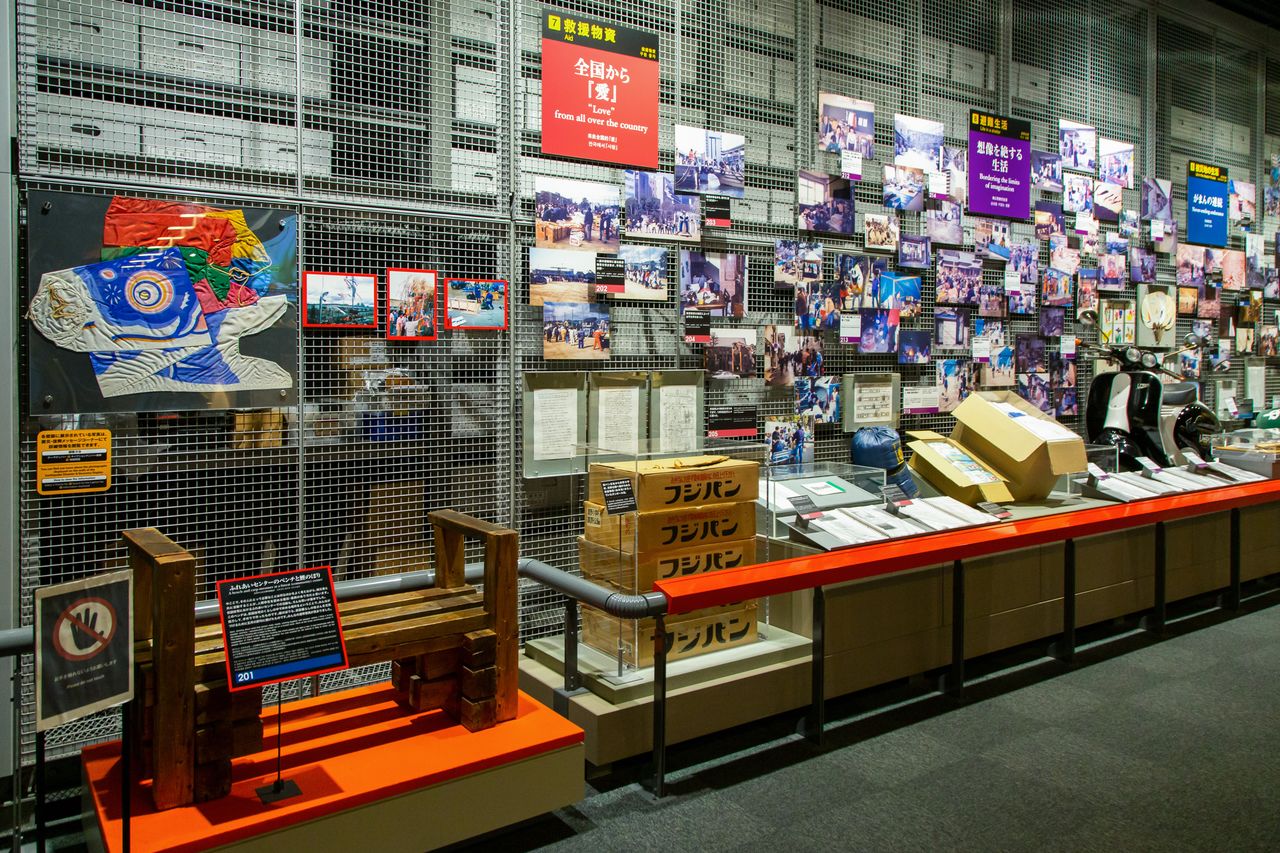 The Disaster Reduction and Human Renovation Institution works to collect and display materials relating to volunteer and support activities.

(Originally published in Japanese on January 4, 2020. Reporting, text, and photos by Nippon.com. Published with thanks to the Kobe Tourism Bureau.)