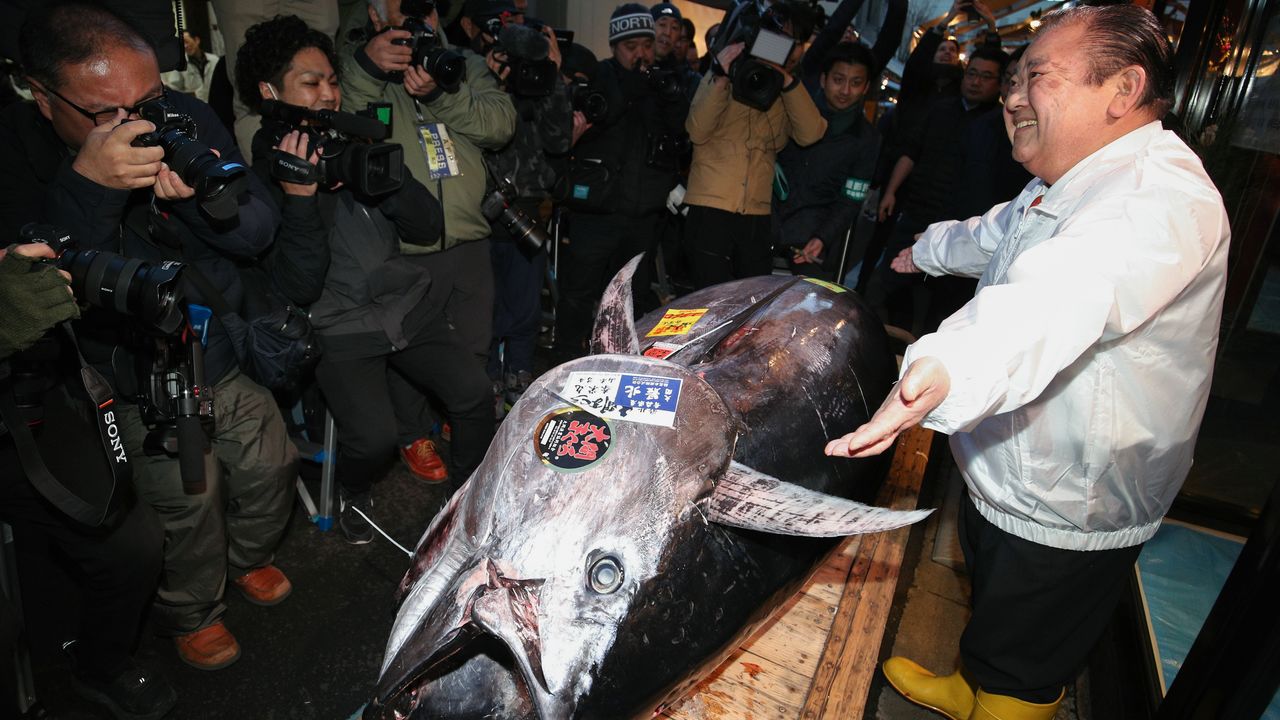 Lifestyle Food and Drink Feb 21, 2020
The first tuna auction of the year at the Toyosu Fisheries Wholesale Market is considered an auspicious event, and the incredibly high bids always make the news. Of course, the prices are not always that high. This article goes behind the scenes to find out how tuna prices are set—something you can’t learn on a whirlwind sightseeing tour.

Early in the morning of January 5, 2020, a bluefin tuna captured in the waters off Ōma on the northern tip of the Aomori Prefecture coast was sold at the Toyosu Fisheries Wholesale Market New Year’s auction for ¥193.2 million. The fish weighed in at 276 kilograms, meaning it cost ¥700,000 per kilogram. While this didn’t quite reach the ¥333.6 million price tag (¥1.2 million per kilogram) for a 278-kilogram tuna sold in 2019, it still ranks as one of the highest bids ever, including the decades when the new year auction was held at the old Tsukiji Fish Market.

This kind of largesse, however, only occurs at the first auction of the year and is in essence an advertising stunt widely covered by the media. The tuna auction is a regular daily event at Toyosu, notable for the lively exchange between the auctioneers and bidders, but the highest prices rarely go above ¥5 million per fish.

It Takes a Discriminating Eye

There is wide disparity of size among the tuna placed on auction, and bids are made for each individual fish. Generally, prices are determined by the size and type of tuna. While this is not always the case, the most valued type is Pacific bluefin tuna, followed in descending order by southern bluefin, bigeye, and yellowfin. For Pacific bluefins in particular, auctioneers and bidders alike will make sure to get to the auction early in the morning so that they will have ample time to examine each fish on the auction block and make their selections and estimate prices.

There is a major price difference, too, between wild and farmed bluefin tuna. Numerous advances have been made in tuna farming, but so far farmed tuna have not attained the quality of wild tuna caught in the open seas. Wild tuna can run from ¥7,000 or so per kilogram to as high as ¥30,000. Even the celebrated bluefin, depending on the season and the quality of the meat, can go for just around ¥3,000. Farmed tuna, which are usually smaller, go for ¥2,000 to ¥3,000. Frozen yellowtail tuna can be as cheap as just a few hundred yen. 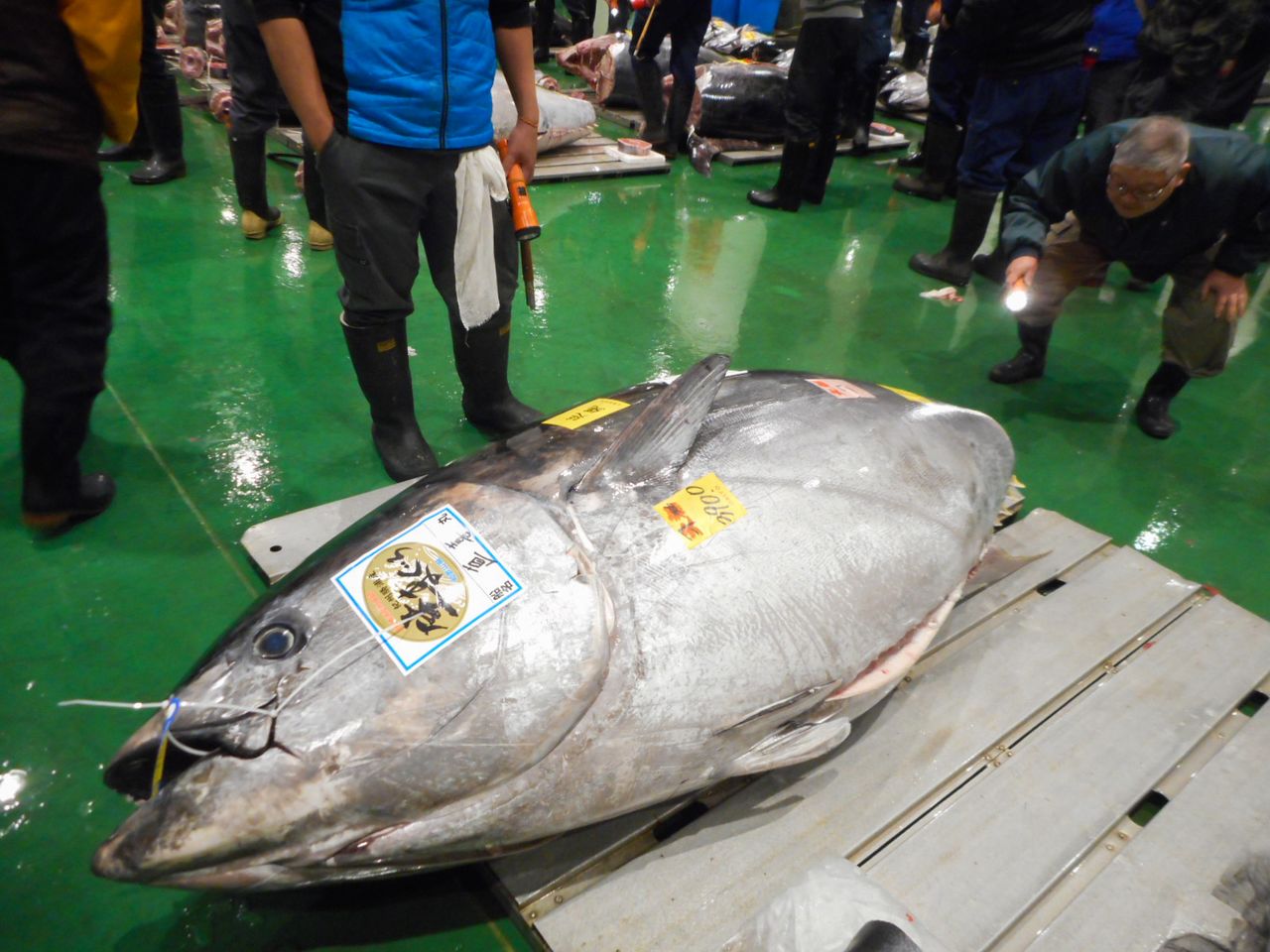 Checking a bluefin tuna for quality. A small cross-section cut from the tail is carefully examined using a flashlight to check the grain and condition of the meat. (© Kawamoto Daigo)

The manner of fishing also affects the quality of tuna catches. At the Ōma fishing port, which lands some of the most prized bluefin in Japan and markets them successfully under the Ōma brand, two methods are used: pole-and-line and longline. In longline fishing, multiple hooks are tied to lines attached to one long main line cast out into the fishing grounds. Pole-and-line fishing is used to catch one tuna at a time and is considered to cause the least damage to the fish. One might assume that catching with pole and line would result in more desirable fish, but the seasoned wholesalers at Toyosu favor longline catches.

Pole-and-line fishing is usually done from small boats with just one or two people. Each catch generally entails a long battle as the fish struggles for its life, and refrigeration equipment to keep the fish fresh is often inadequate. Longline fishing is done from larger craft, and thanks to close teamwork the process from catch to refrigeration is smooth and efficient. The result is firm meat with little discoloration. Of course, much depends on the size of the tuna and the skill of the fishermen, and longline is not always guaranteed to come out on top. Still, both of the top-priced bluefin specimens sold at the 2019 and 2020 New Year’s tuna auctions were longline catches from Ōma.

Other methods include fixed net fishing and round haul net fishing. The latter uses a net called a seine designed to circle and capture a whole school of fish. While this method is efficient and makes for a large catch, the captured tuna struggle inside the net and are often bruised and scratched. This can lower the quality of their meat, though there are certain times and locations where net haul fishing yields some good quality tuna, such as the summer catches out of Shiogama Port in Miyagi Prefecture and Tottori Prefecture’s Sakai Port. Toyosu wholesalers report giving higher ratings to fish from certain locations and fisheries in this way. 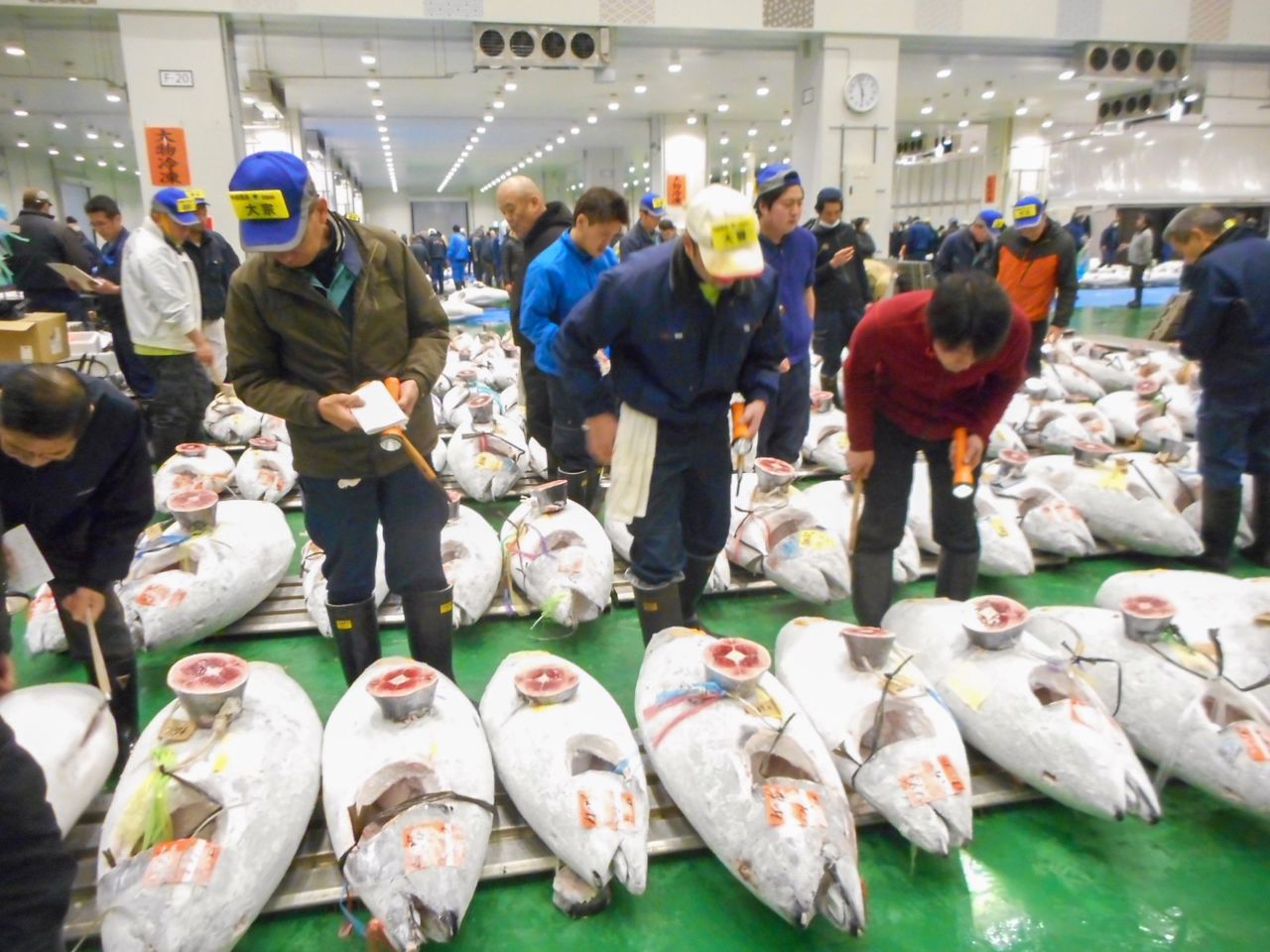 Wholesalers evaluate the quality of frozen tuna before the start of the auction. (© Kawamoto Daigo)

Size makes a difference, but at the Toyosu Fish Market, weight is given more importance than size. A heavy tuna means more fatty meat, known as toro, that can bring in a higher price. Experienced wholesalers favor tuna weighing between 100 and 250 kilograms. Tuna over 100 kilograms are considered to be large specimens; those weighing less than 30 are small. But this is only a general guideline. A medium-sized 90-kilogram tuna with good-quality meat can sell at a higher price than some larger tunas. 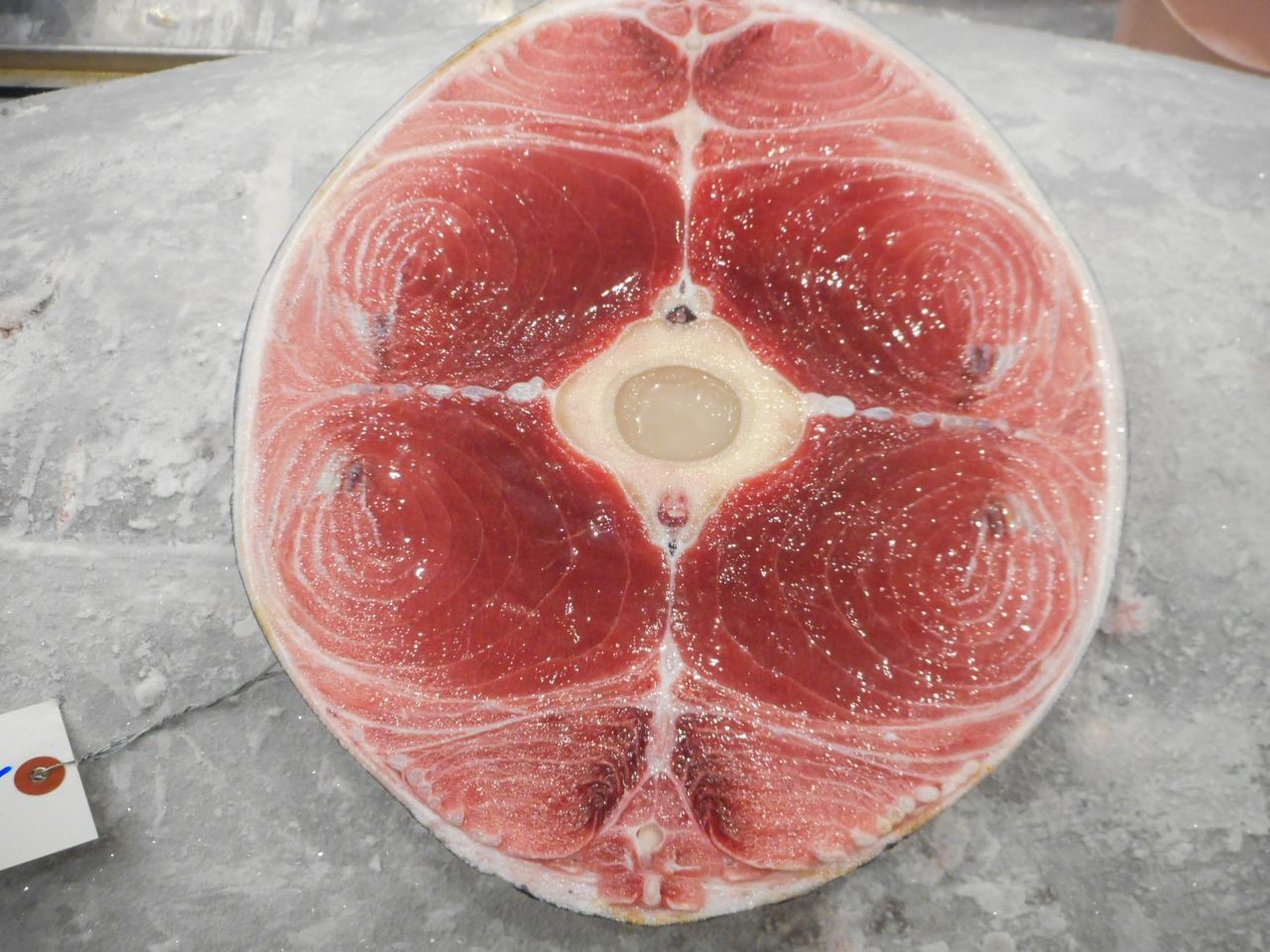 The tail cross-section is critical for evaluating tuna quality. Wholesalers and buyers look at the distribution of fatty tissue, the quality of the red meat—a measure of viscosity and umami—and overall color.

Domestic tuna are by far more popular than imported tuna. Still, as a major consumer of tuna, Japan accepts high-quality fresh tuna air-freighted from around the world. Most recently, 100-kilogram-class tunas transported from places like North Carolina and Boston in the United States have sold for several million yen per fish, at rates of ¥10,000 and more per kilogram. 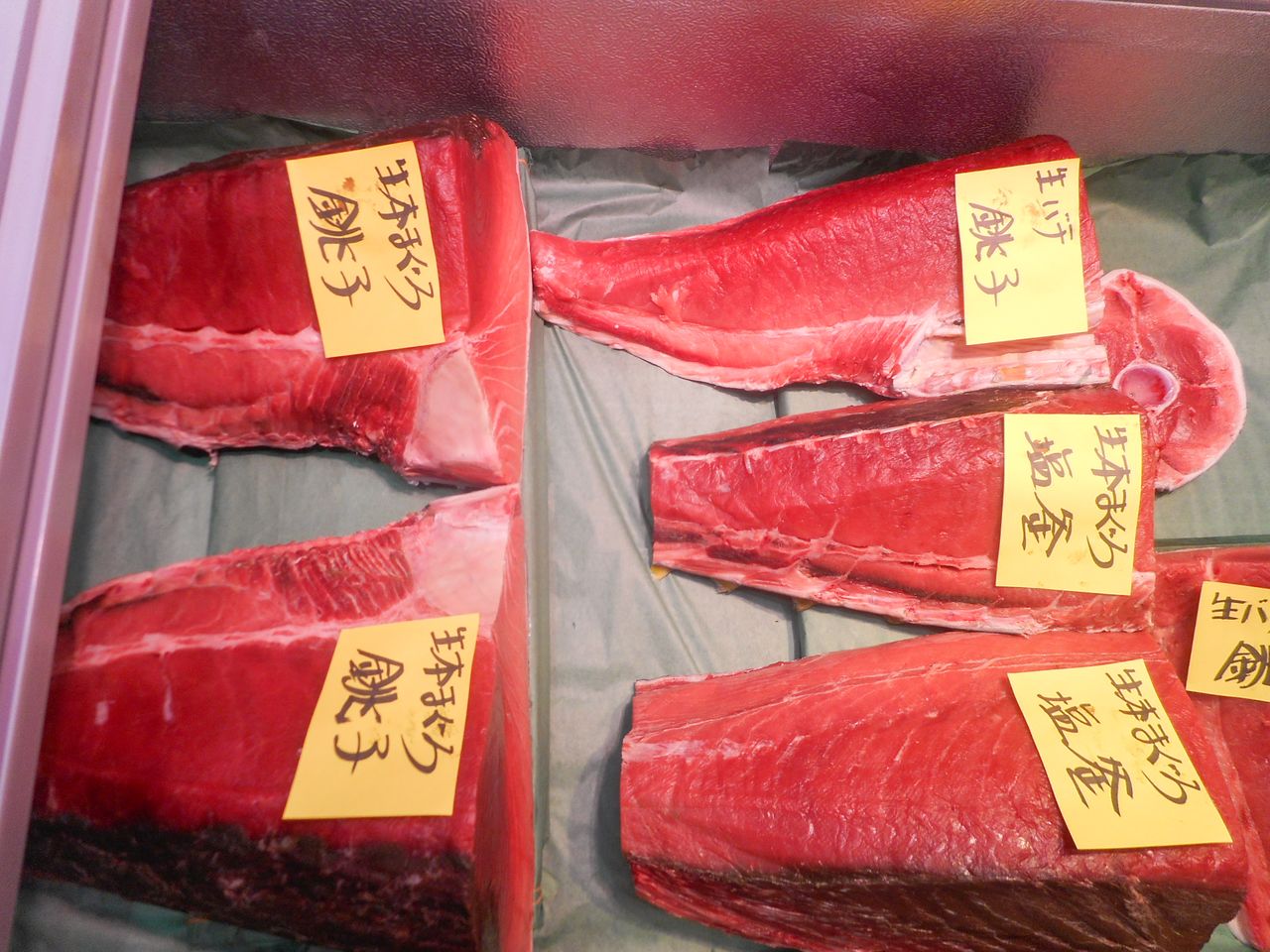 Blocks of tuna from the wholesale market on sale at a retailer catering to sushi shops and restaurants. Each block is marked with the name of its port of origin. (© Kawamoto Daigo)

The Toyosu auction of raw tuna starts at 5:00 am with the ring of a bell. A range of hand gestures called teyari are used to place bids. 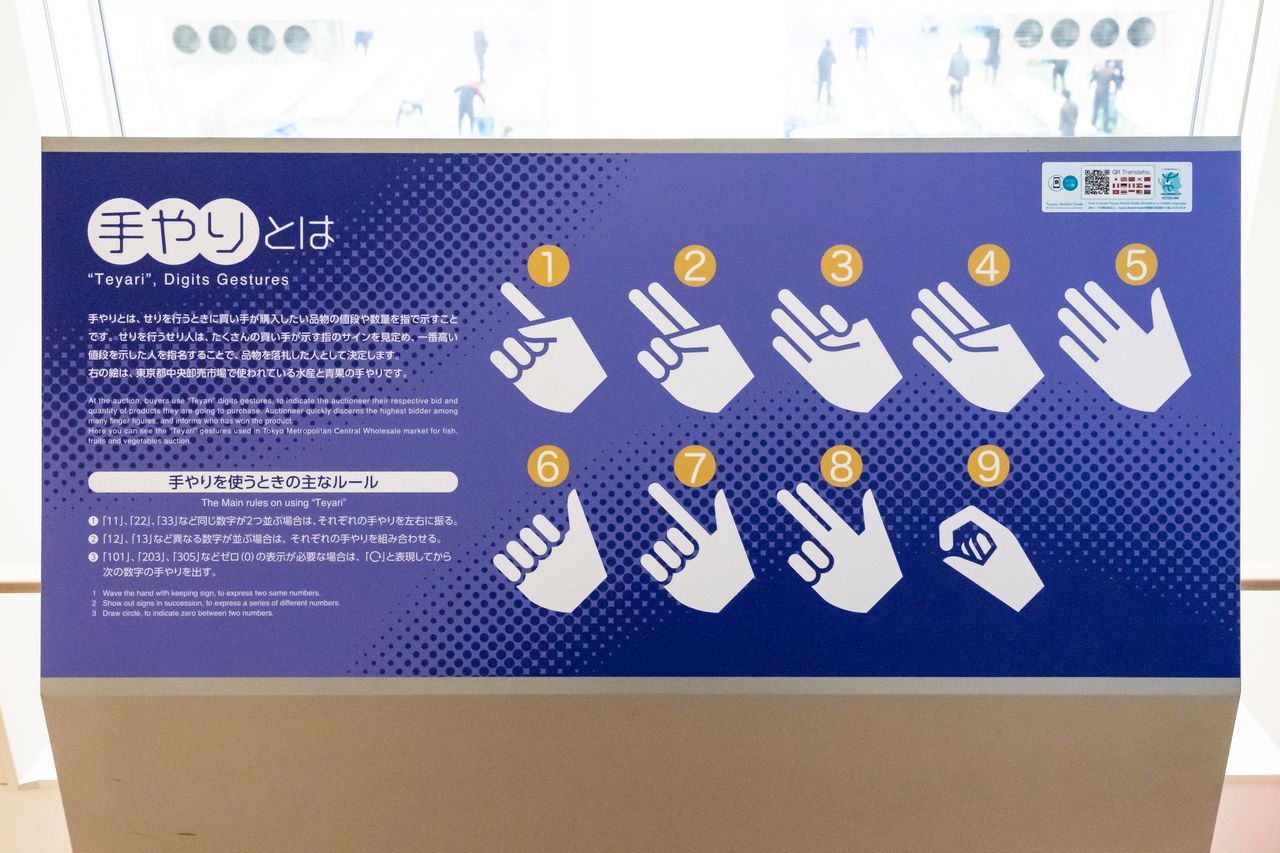 A panel display at the Toyosu Fisheries Wholesale Market explains the hand gestures used in the tuna auctions. (© Kawamoto Daigo)

Teyari hand gestures have long been the favored form of placing bids in a noisy and bustling fish market. The index finger stands for the number 1, and the index and middle fingers together stand for the number 2. Extending the index finger, folding it back and then extending it again in a 1, 1 gesture is called a pin-pin. Leaving the index finger extended while extending, folding and extending again the middle finger in a 1, 2 gesture is called an in-nī. Whether these numbers mean ¥1,100 and ¥1,200 or ¥11,000 and ¥12,000 depends on the type of fish being auctioned and the going rates at the time.

The bidder offering the highest price in the midst of the flying teyari will generally get the fish, but other bidders may choose to push up the price if they want a particular tuna. Bidding for one tuna can end in just 5 seconds.

At the Toyosu new year’s auction this year, the bidder for Kiyomura Corporation, operator of the Sushi Zanmai restaurant chain, won with a bid of ¥700,000 per kilo. The competition among the bidders is fierce, and the auctioneers have to be skilled at picking out the highest bidder in an instant. Visitors are certain to be riveted by the silent but vigorous exchange of hand gestures at the Toyosu tuna auctions. 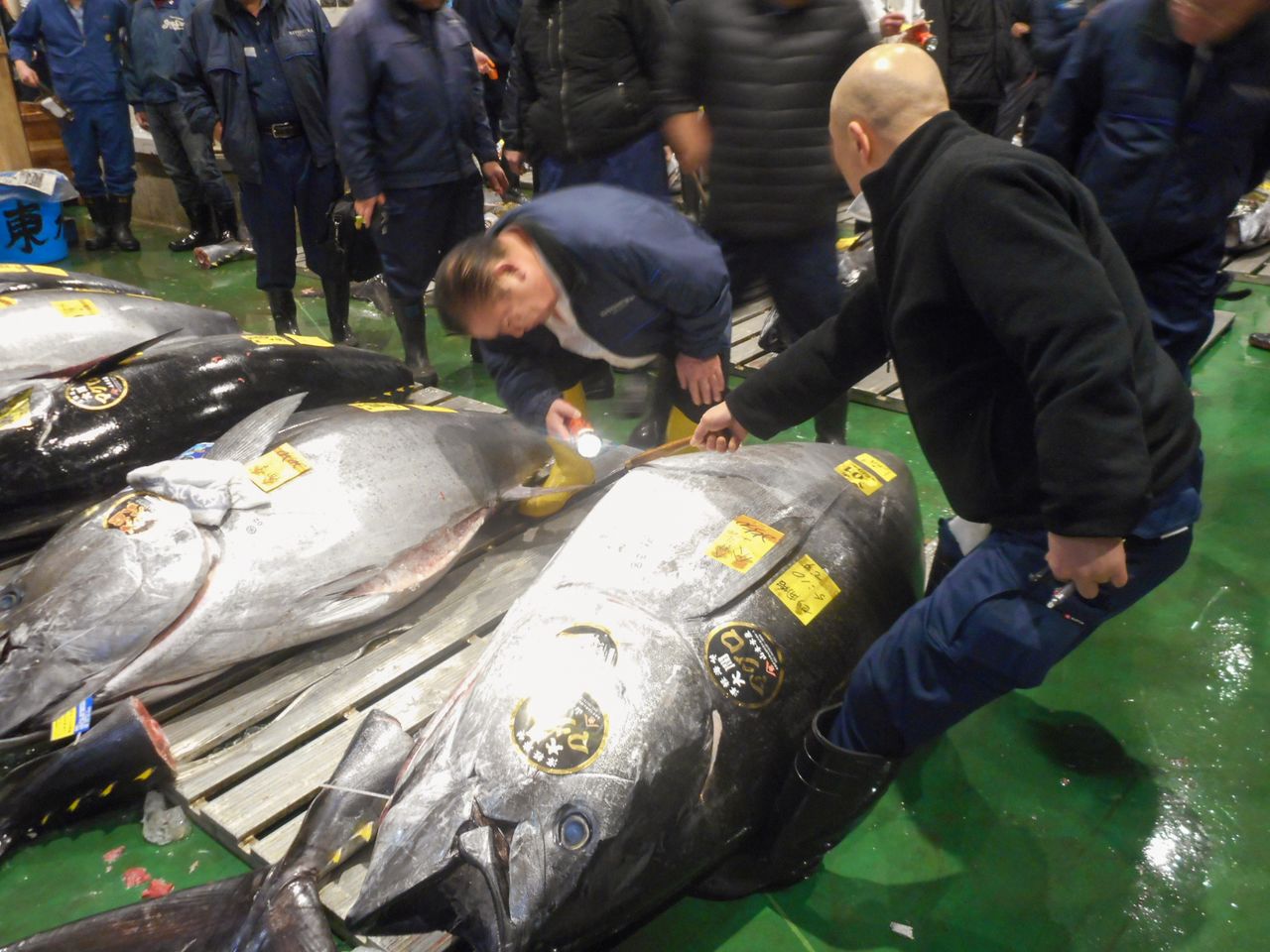 Kimura Kiyoshi, who heads the Sushi Zanmai chain of restaurants, uses a flashlight to check out a tuna at the Toyosu New Year’s auction. (© Toyosu Fish Market)