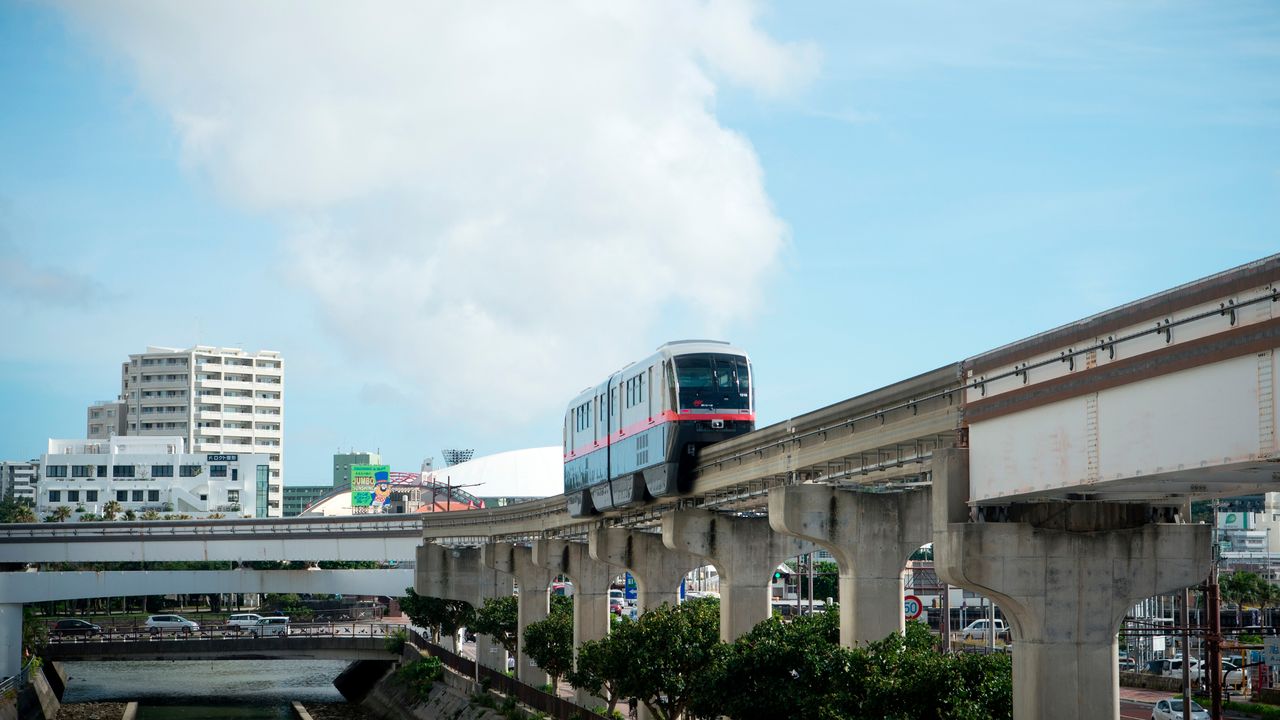 Travel Mar 27, 2020
The Okinawa Urban Monorail is a must when navigating tourist spots in congested Naha, and is now more convenient than ever after an extension in October 2019 that linked it to Okinawa’s expressway network. We look at the attractions available near the new monorail stops.

The Okinawa Urban Monorail, known as the Yui Rail, includes both the southernmost (Akamine) and westernmost (Naha Airport) railway stations in Japan. The “Yui” of the line’s colloquial name is taken from the Okinawan word yuimāru, literally “join in order,” and connotes mutual aid and coexistence. Beginning at Naha Airport, the gateway to Okinawa, the Yui Rail offers access to Naha’s business district, the touristy Kokusai-dōri, and heritage-listed Shuri Castle. As well as being a smooth and comfortable way of avoiding traffic, the Yui Rail also offers unparalleled views from its elevated track. 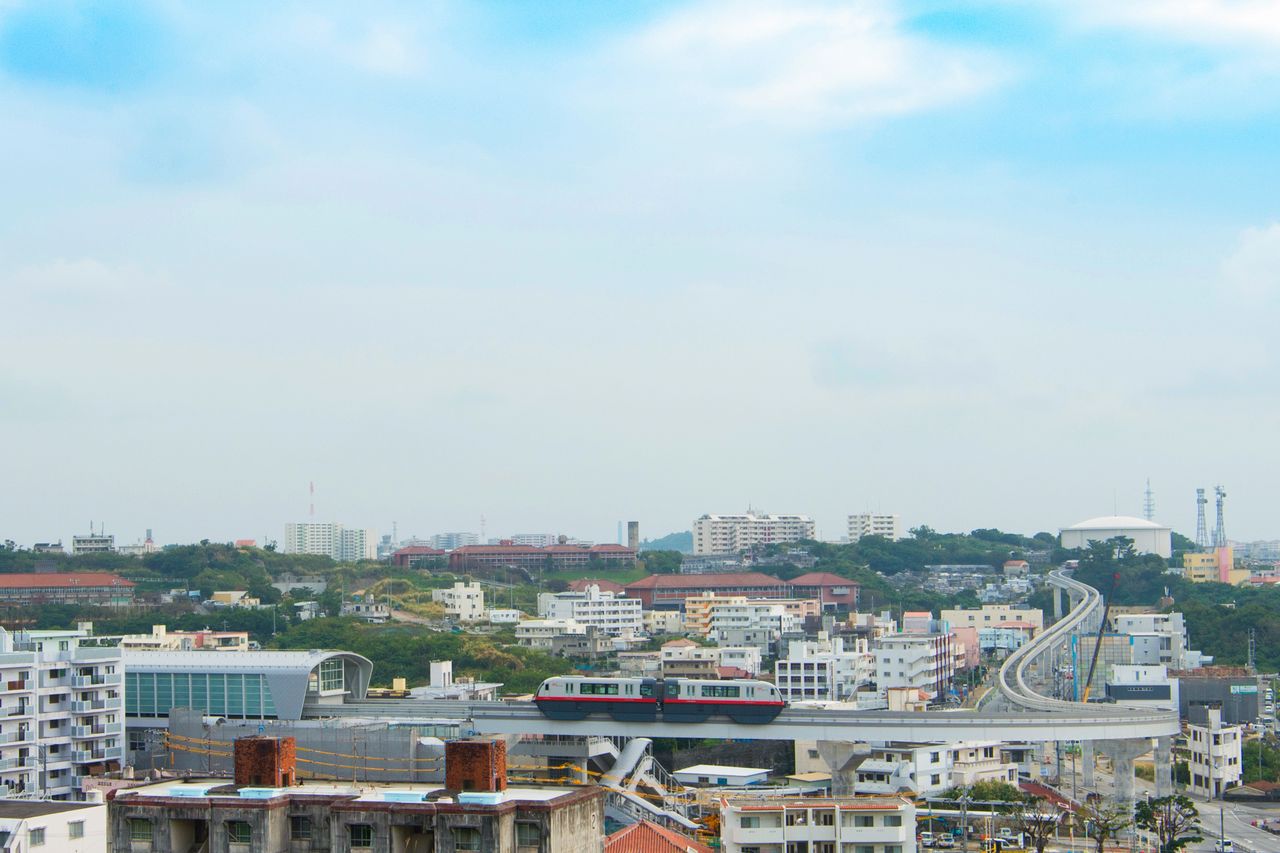 The Yui Rail gliding over the neighborhoods below. 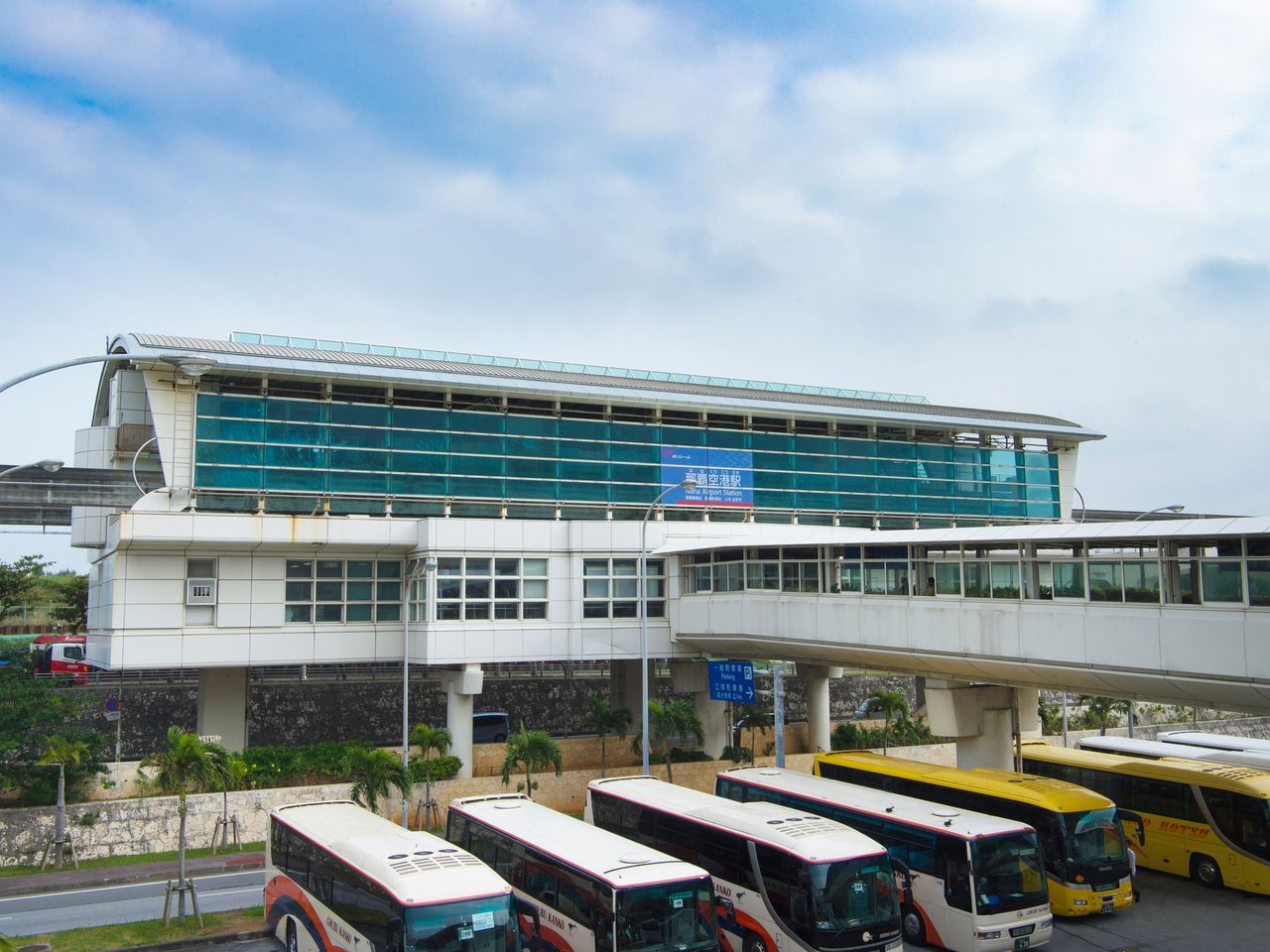 The service goes all the way to Naha airport. 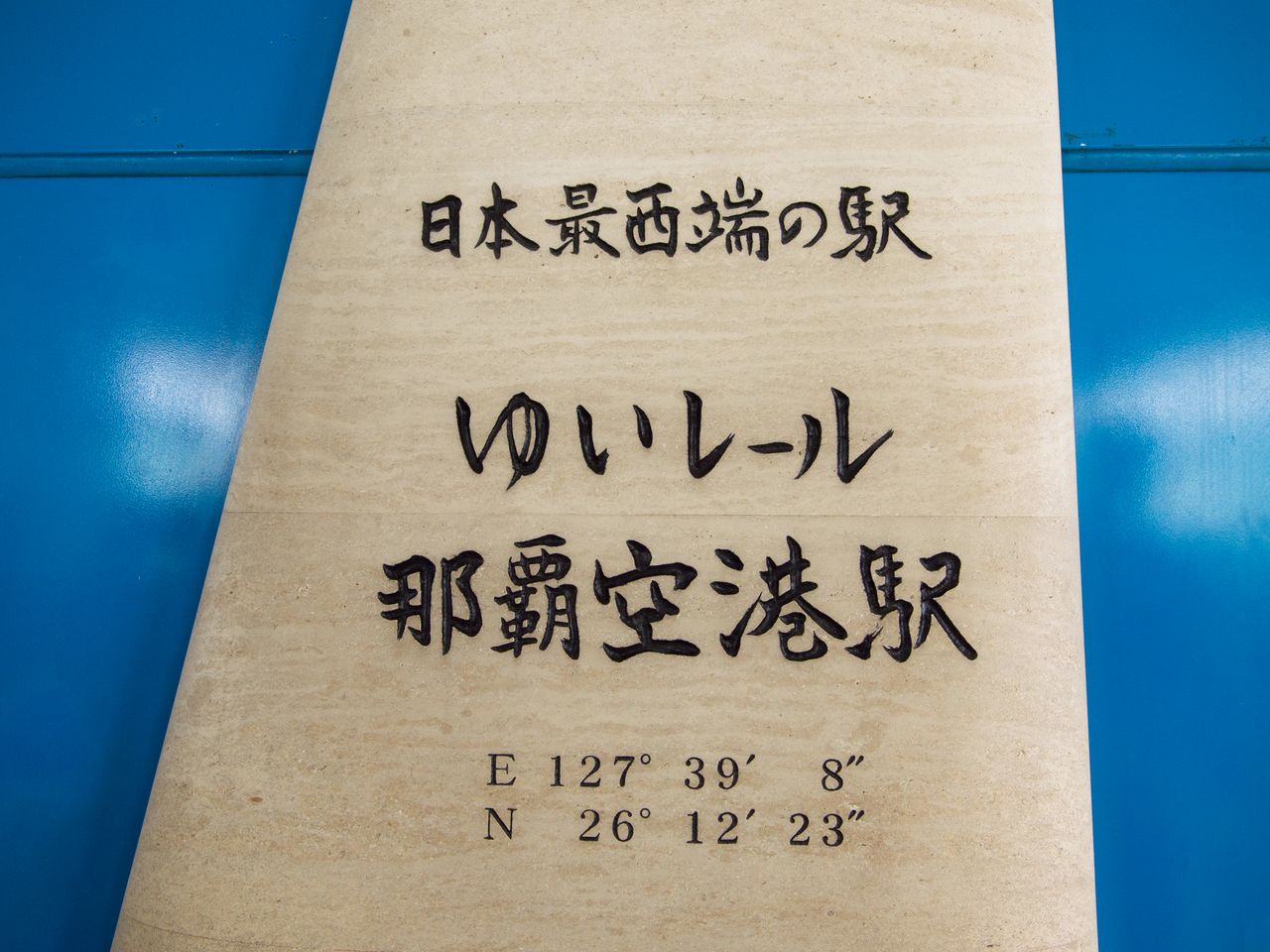 A plaque attesting to Naha Airport Station’s status as the westernmost station in Japan. The adjacent Akamine Station is the southernmost.

The Yui Rail opened in August 2003 as 13-kilometer line traversing the route from Naha Airport to Shuri. The line was subsequently extended to a total of 17 kilometers, and four new stations were opened on October 1, 2019, the terminal station now being Tedako-Uranishi. 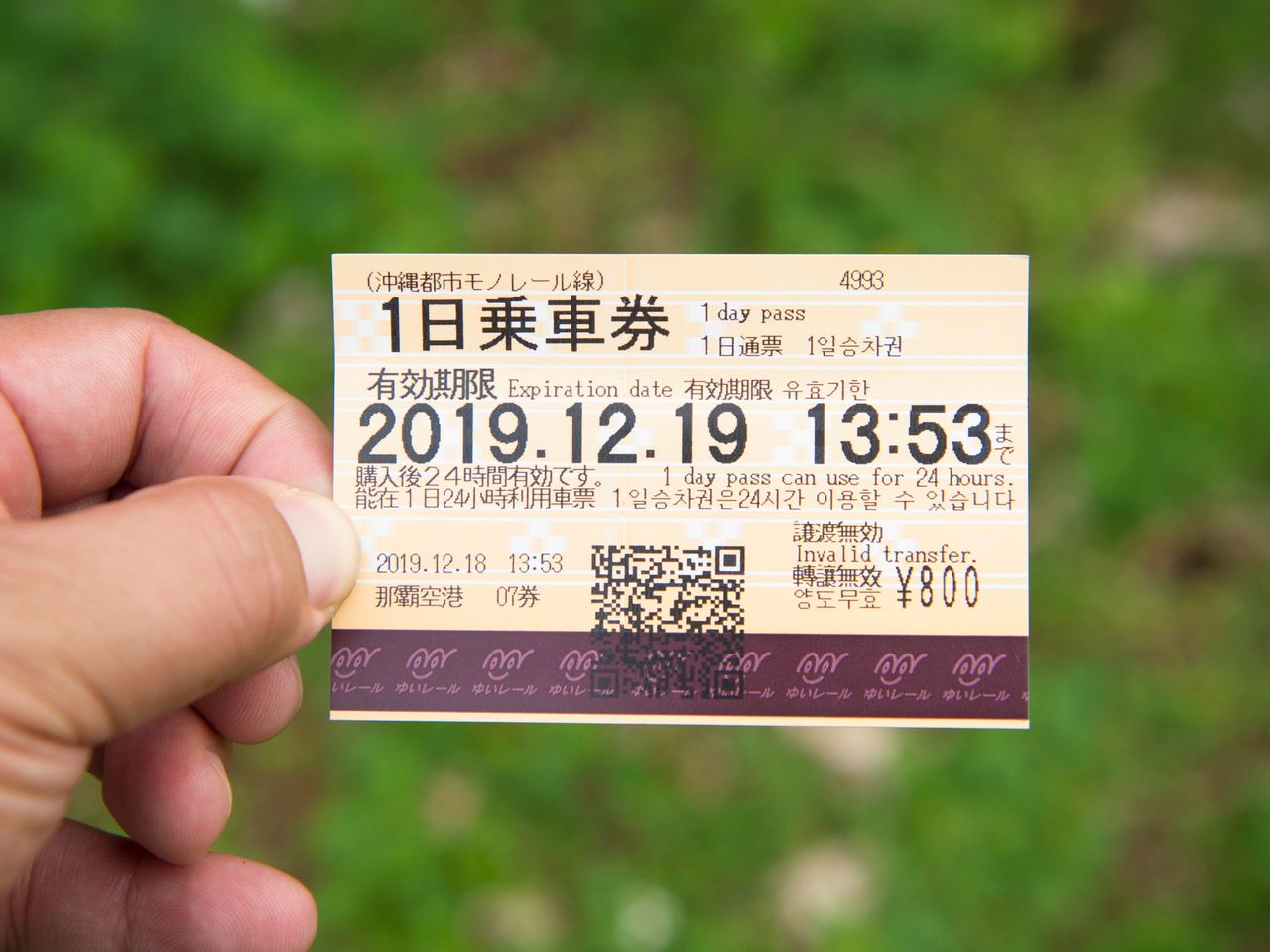 The one-day pass is valid for 24 hours and can be presented for discounts at many attractions, including Shuri Castle.

Of the new stations on the line, the one that is attracting the most attention is the terminal station, Tedako-Uranishi. Connecting the Yui Rail to the Okinawa Expressway connecting Naha and Nago, the station has parking for around 1,000 cars.

While the Kōchi interchange that will connect the expressway directly to Tekado-Uranishi Station will not be completed until 2024, the parking lot is already operational, meaning that you can exit the expressway at the Nishihara offramp, drive five minutes to Tekado-Uranishi, and get on a train. The development enables commuters travelling to central Naha and airport users to park their cars and change to the Yui Rail, thereby guaranteeing them a smooth trip and avoiding the traffic into the city. 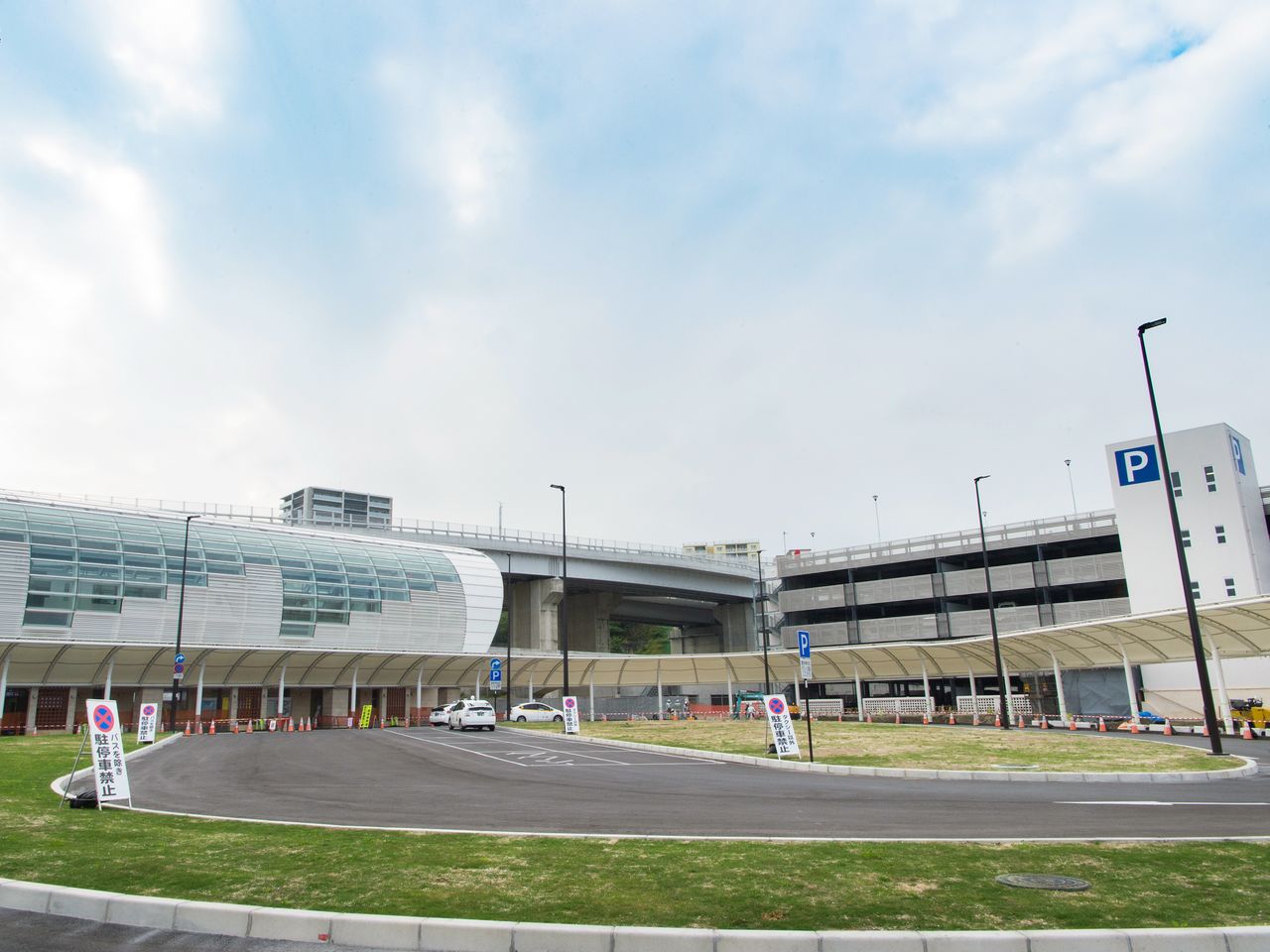 Tedako-Uranishi Station is located next door to a large parking building. A bus terminal is also in the pipeline.

Tedako-Uranishi Station is a godsend for tourists. With resorts and hotels on Okinawa’s main island concentrated in the strip between Onnason in the midwest and Nago in the north, accommodation packages tend to be bundled with a rental car. Many visitors to the island drive everywhere, and tend to get stuck in traffic in Naha, or have difficulty parking. Those who want to get the most out of Naha sightseeing should definitely consider the Tedako-Uranishi Station’s park-and-ride service.

Also under construction is a bus terminal that will allow tourists to travel smoothly from Naha to northern destinations like Manzamō and Onnason, and to the Churaumi Aquarium in Motobu, in the northwest of the island. 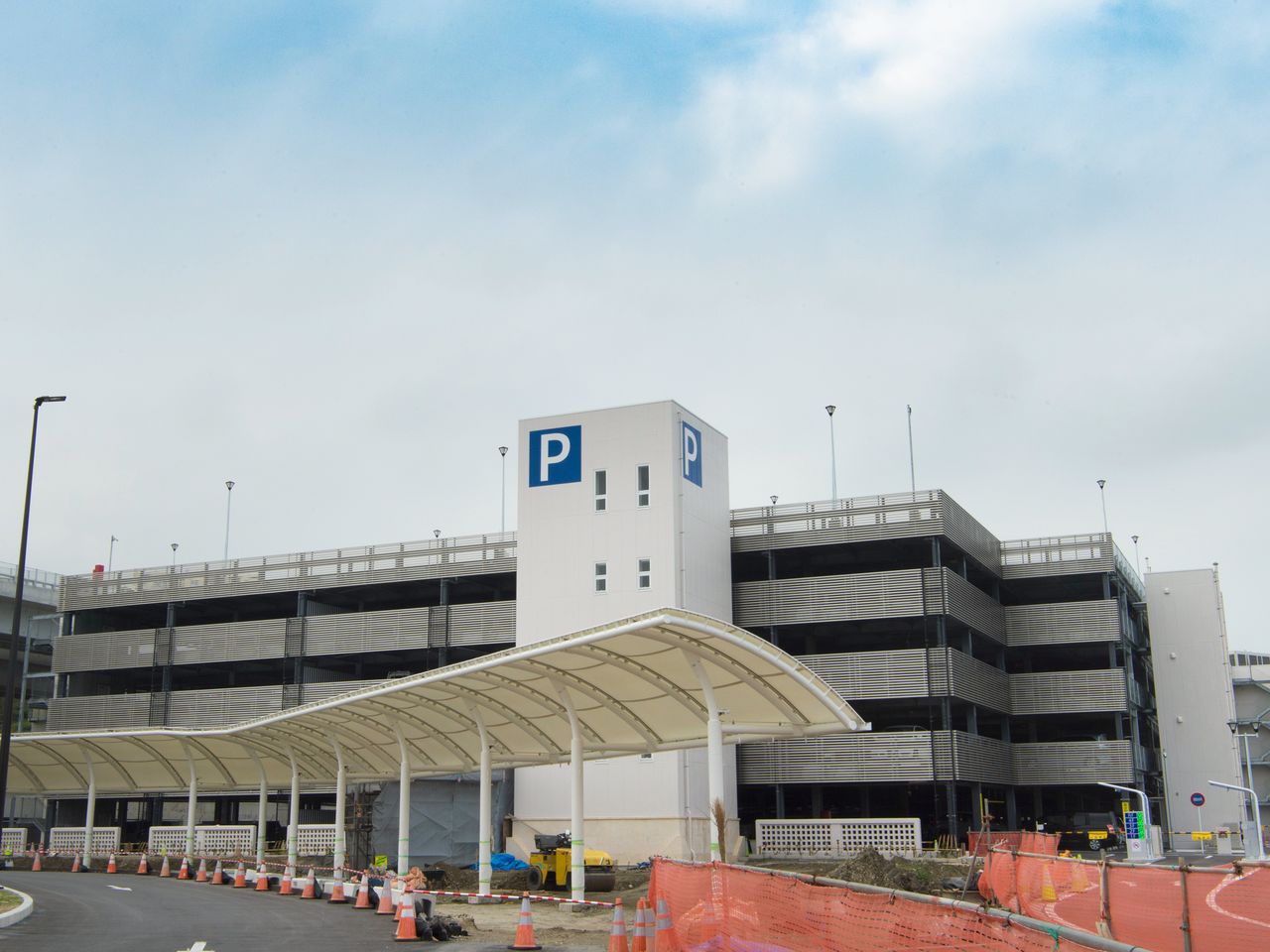 The Park and Ride parking building is open from 5:00 am to 1:00 am. Parking costs ¥100 an hour, up to a maximum of ¥400 per day. Overnight parking costs ¥260 per night, making this a reasonable long-term parking option for airport users. 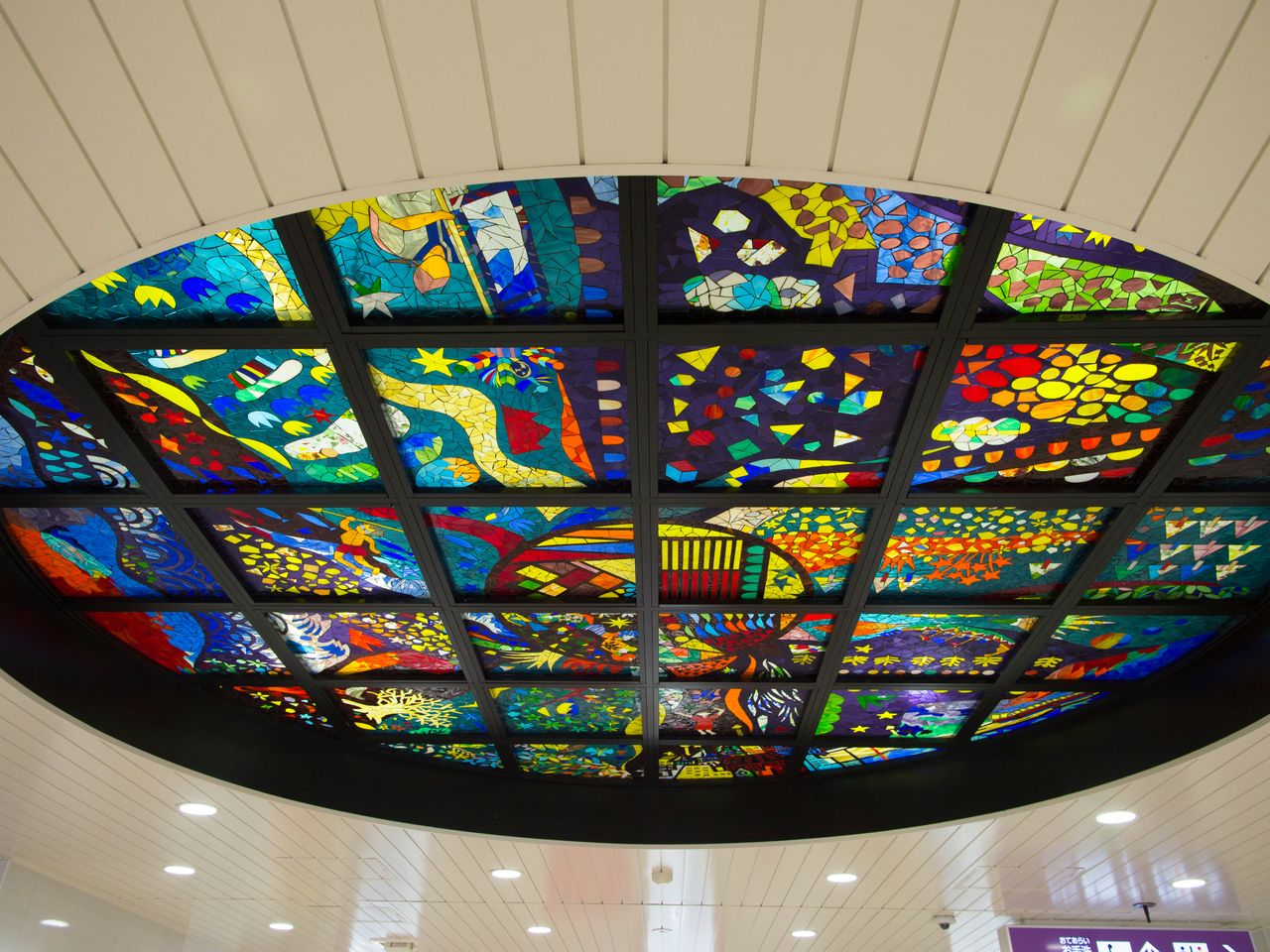 Every Yui Rail station displays locally themed artwork. This stained-glass work in Tedako-Uranishi Station has the sun as its theme.

Hot Spots Around the New Stations

Next on the line from Tedako-Uranishi is Urasoe-Maeda Station, just 15 minutes’ walk from the giant Urasoe Gusuku (castle remains). From the fourteenth century to the early fifteenth century, Okinawa’s main island was ruled by the Hokuzan, Chūzan, and Nanzan principalities. During this “Three Mountains” period, Urasoe Castle was inhabited by the chieftain of Chūzan. The castle was ultimately destroyed by fire in the 1609 Satsuma invasion. Subsequently, the Urasoe Yōdore mausoleum was enlarged, becoming the burial site for the family of Shō Nei (1564–1620), the seventh king of the second Shō Dynasty that ruled over the Ryūkyū kingdom. While most of the castle remains and stone walls were destroyed when the site was turned into a fortress for the Japanese Army during World War II, they were later restored, and are a now a national historic site. 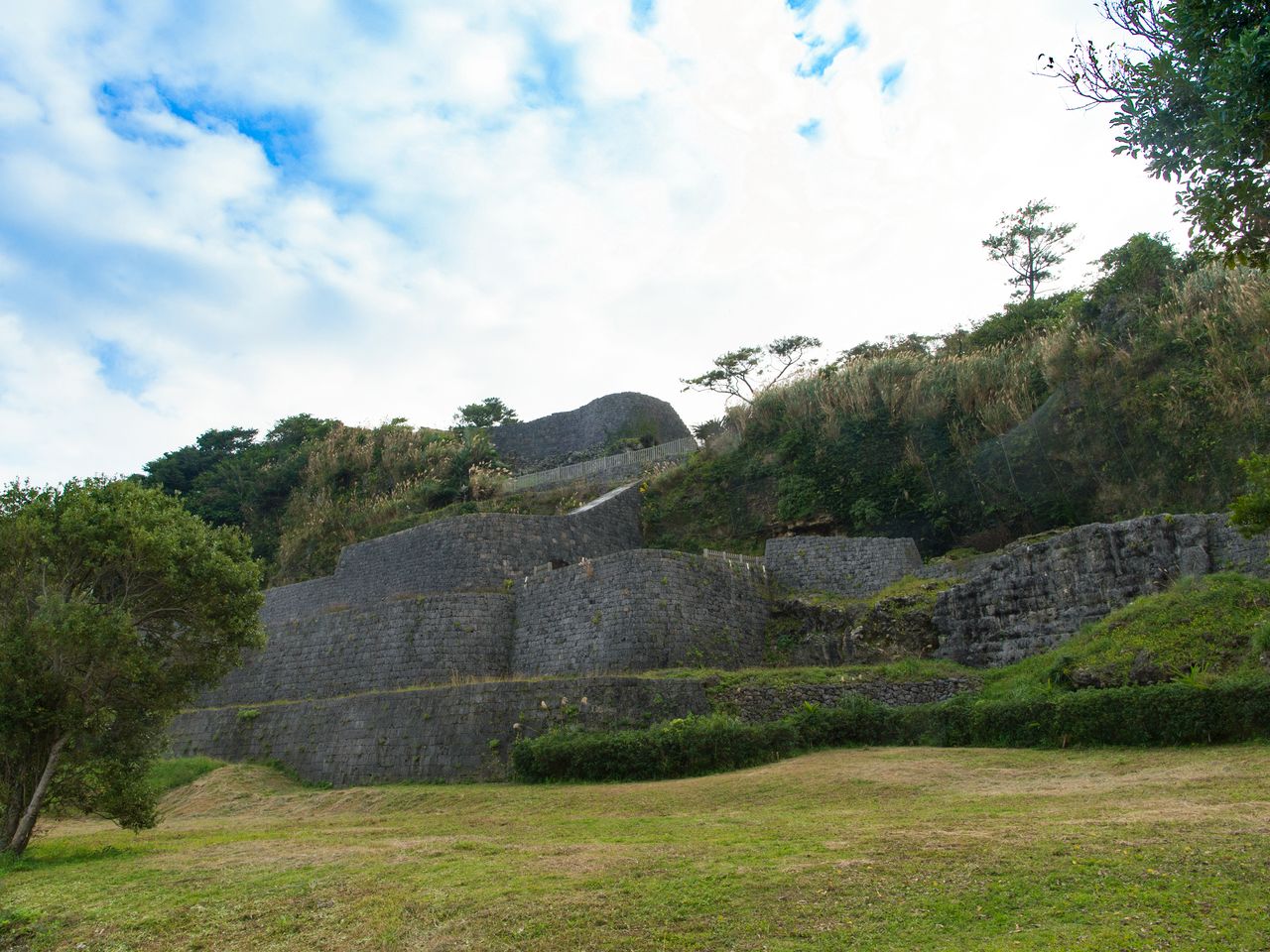 Urasoe Castle is located on a hill, within Urasoe Dai-Kōen. 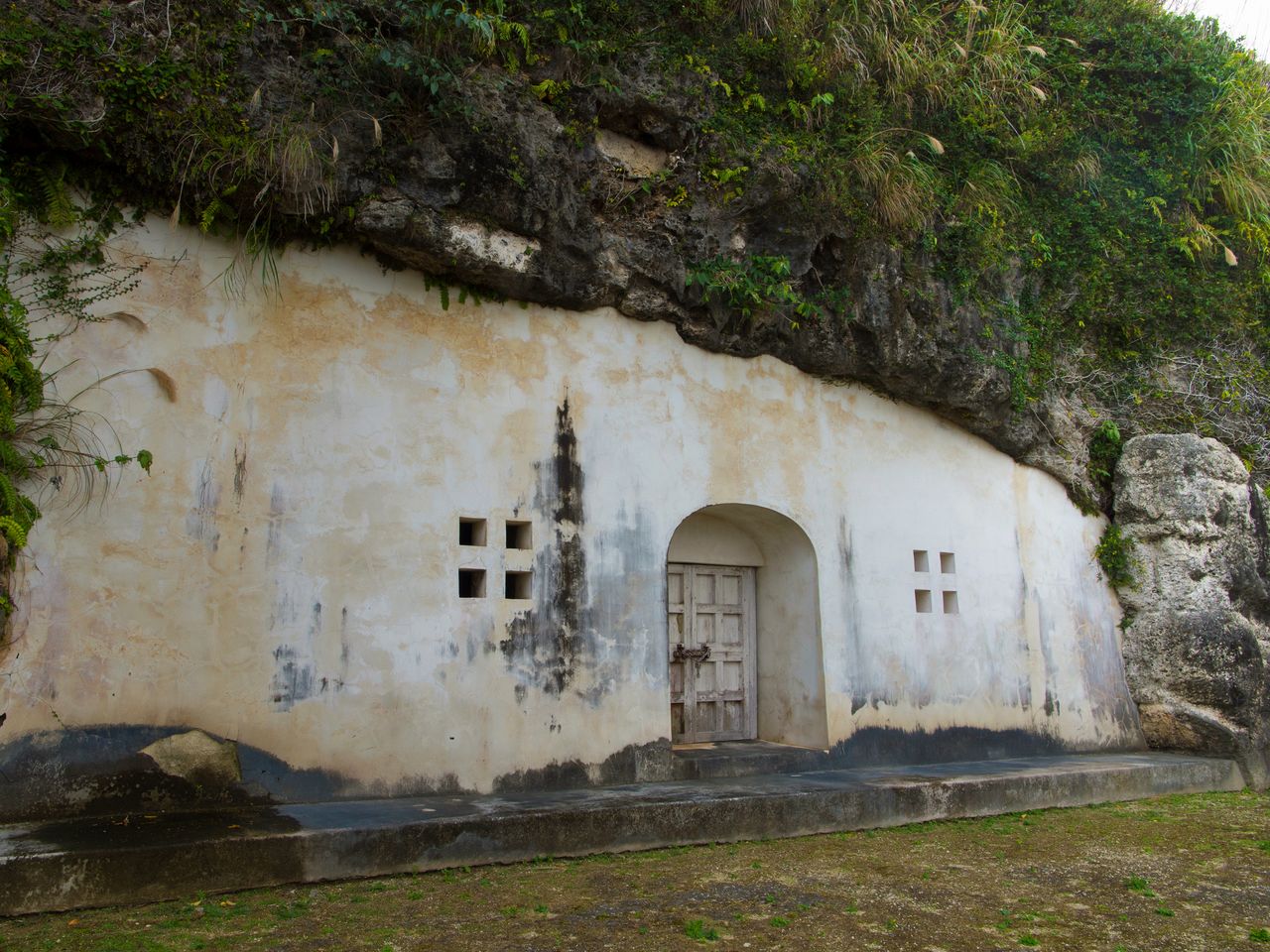 On a hill near Kyōzuka Station is the tomb of Tamagusuku Chōkun, the creator of the traditional Okinawan theatrical dance Kumiodori. The Yui Rail makes a wide detour just northeast of the station to avoid passing over the tomb. Kumiodori was added to the UNESCO Intangible Cultural Heritage list in 2010 and marked its three-hundredth anniversary in 2019. 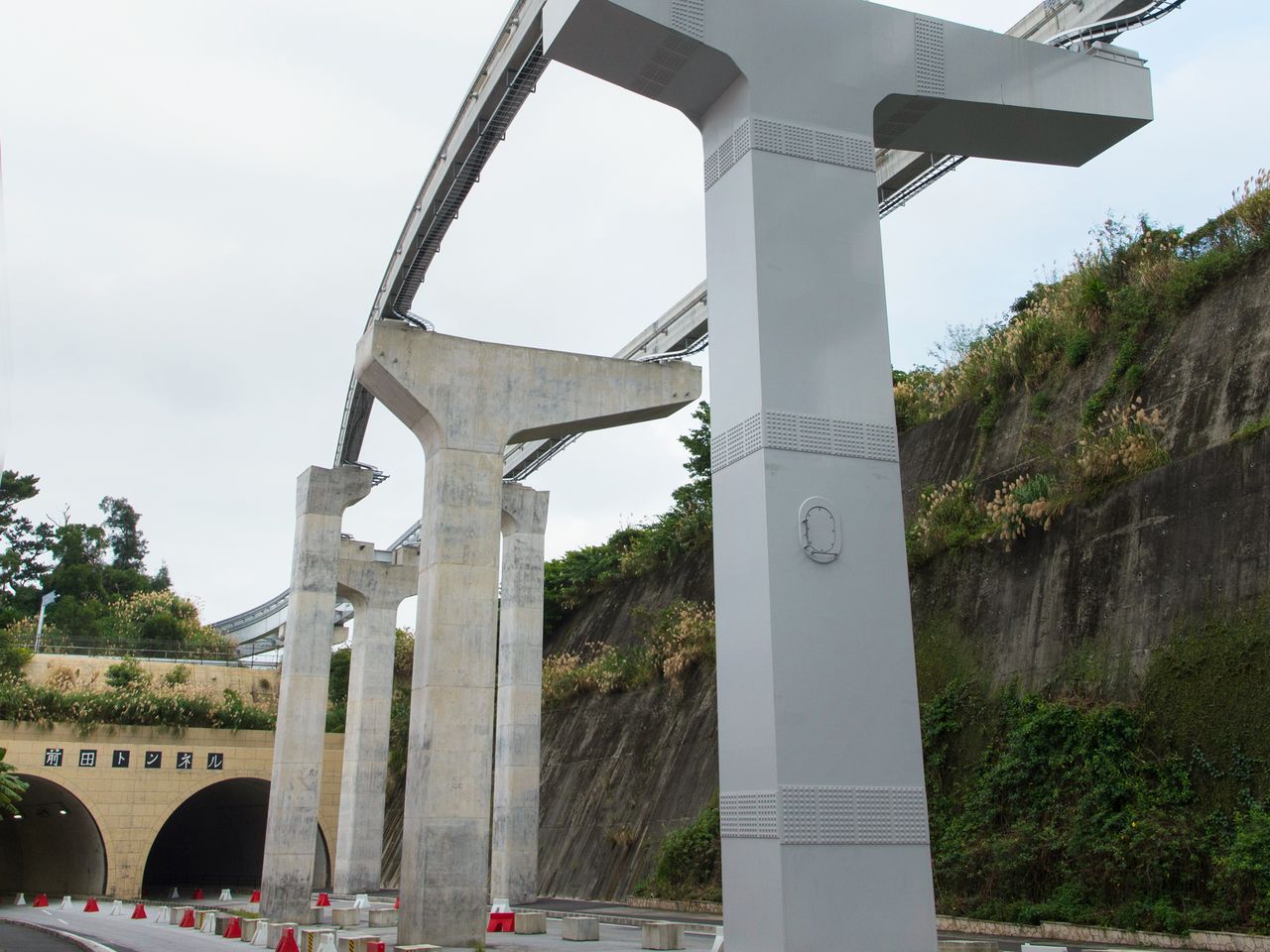 The track makes a sharp bend just before the tomb of Tamagusuku Chōkun. 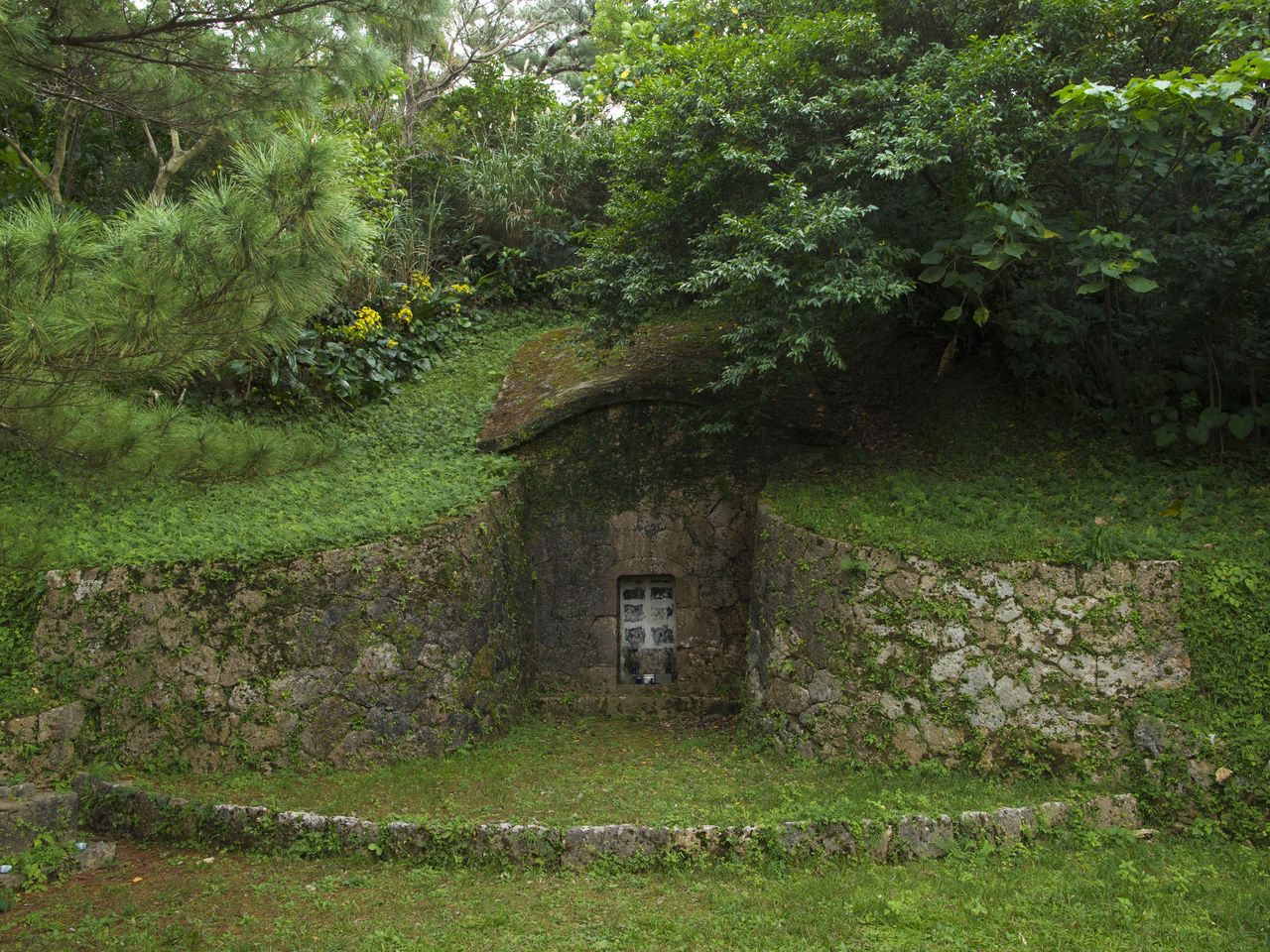 Between Ishimine and Shuri Stations, you will find Gibomanjū, a jam bun proprietor that has been in business for over 100 years. The bright hiragana の (no) painted on nomanjū jam buns, a Shuri delicacy, represents noshi, a wrapping used on a gift. Nomanjū are a must for celebrations. The staff at Gibomanjū will write the character on a freshly steamed bun while you watch. 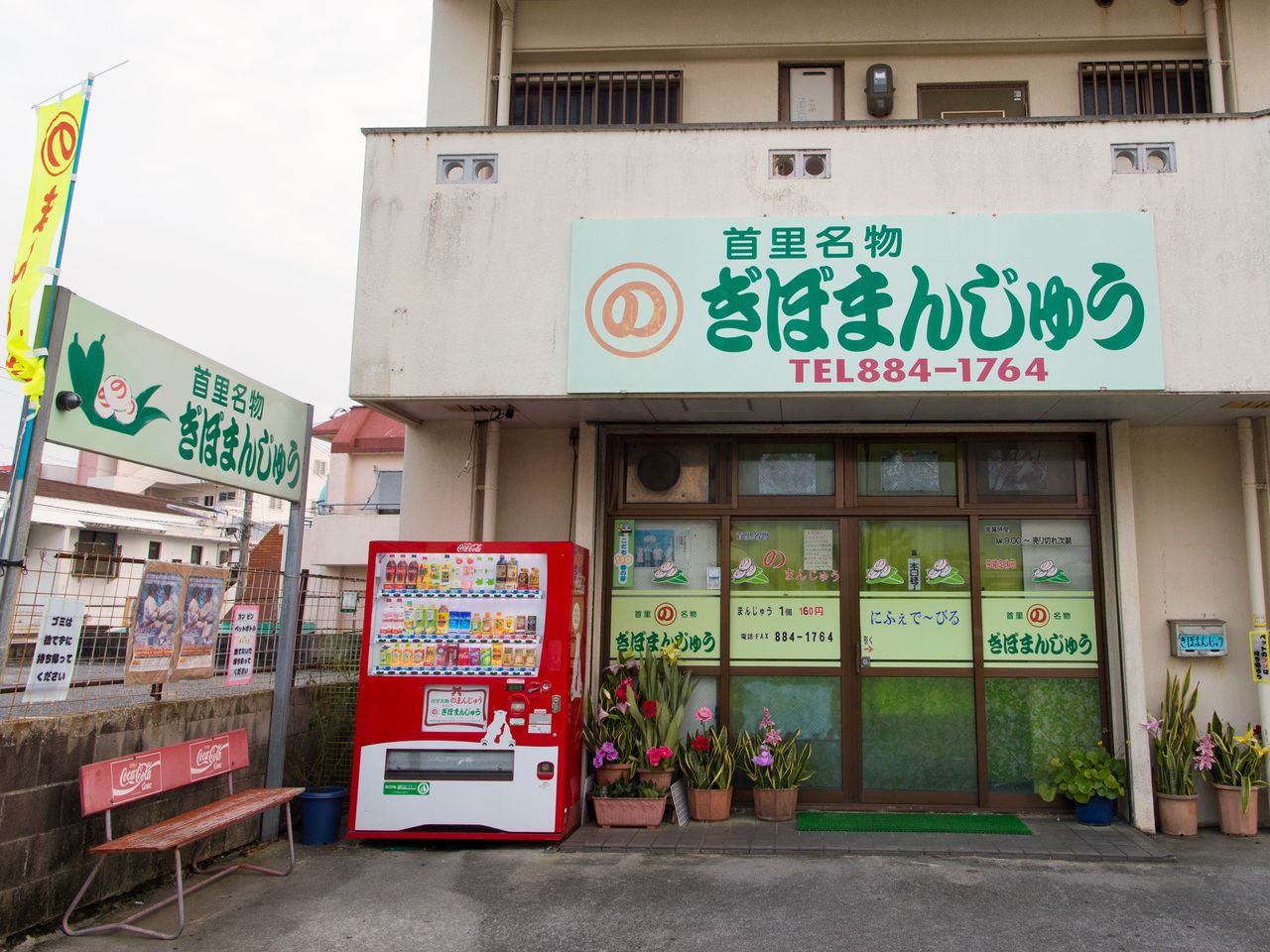 Gibomanjū has been serving its buns for a century. 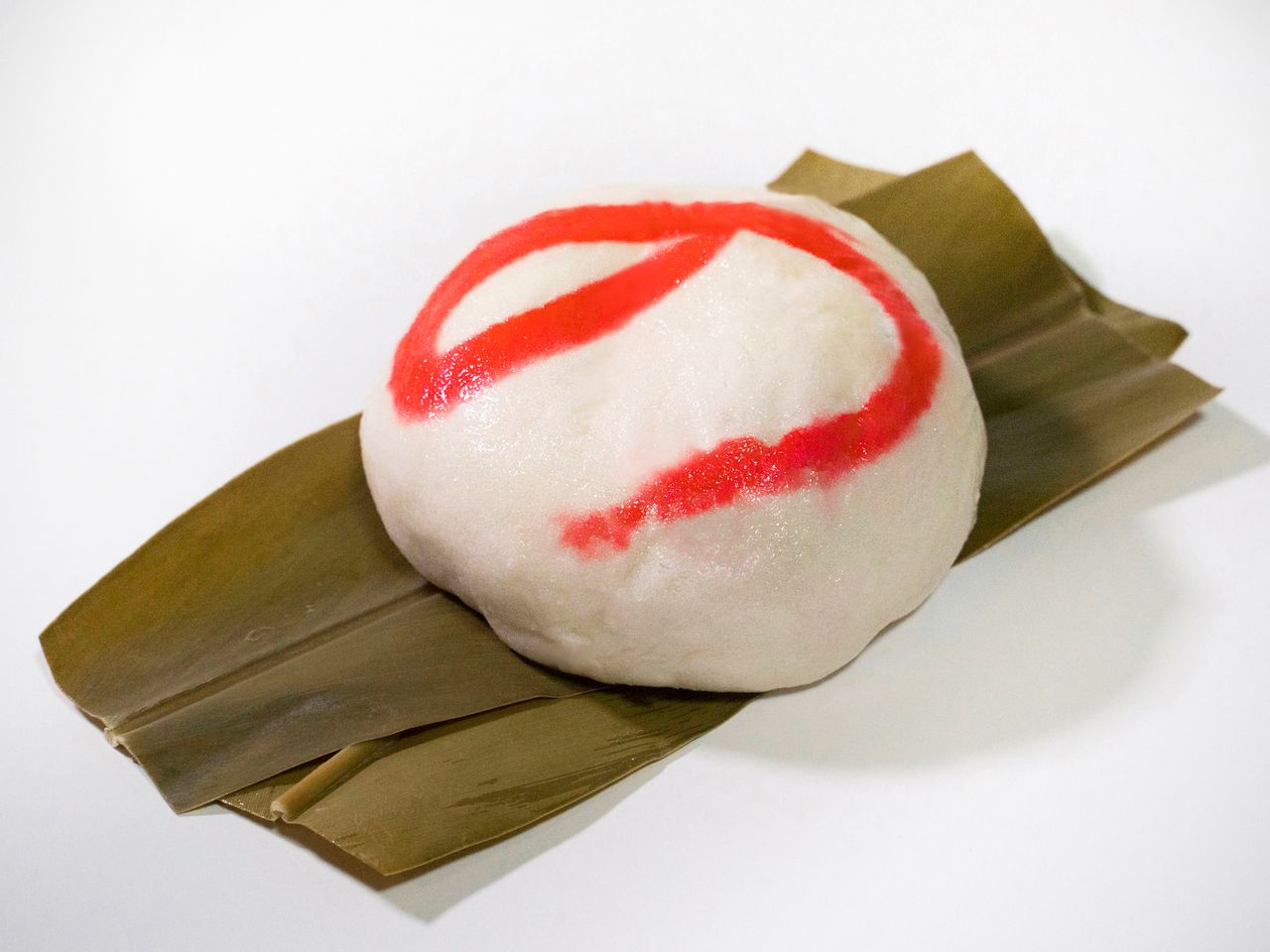 The bean jam in nomanjū has a subtle sweetness.

The “must visit” on the established portion of the Yui Rail line has to be Shuri Station, which is 15 minutes’ walk from Shuri Castle, which was listed as a heritage site in 2000 as part of “Gusuku Sites and Related Properties of the Kingdom of Ryūkyū.” Walk a little farther and include the Tamaudun mausoleum in your visit. Shuri Castle was the center of the Ryūkyū kingdom and was also the residence of Shō Hashi, who ruled Chūzan in the beginning of the fifteenth century and subsequently unified the island’s three chiefdoms.

On October 31, 2019, a fire completely destroyed the castle’s main chamber and North and South wings in addition to seven outbuildings, resulting in the loss of a total of 4,800 square meters of the site. While the fire-affected area is currently off-limits, access is progressively being restored to zones deemed to be safe. Visitors are urged to pay the castle a visit, if only to support its reconstruction.

Tamaudun, the tomb of the Ryūkyū royal family, is about three minutes’ walk from the Shureimon gate. This stone structure is inspired by the wood-thatched palace rooves of the time. The stone walls of the castle are striking. 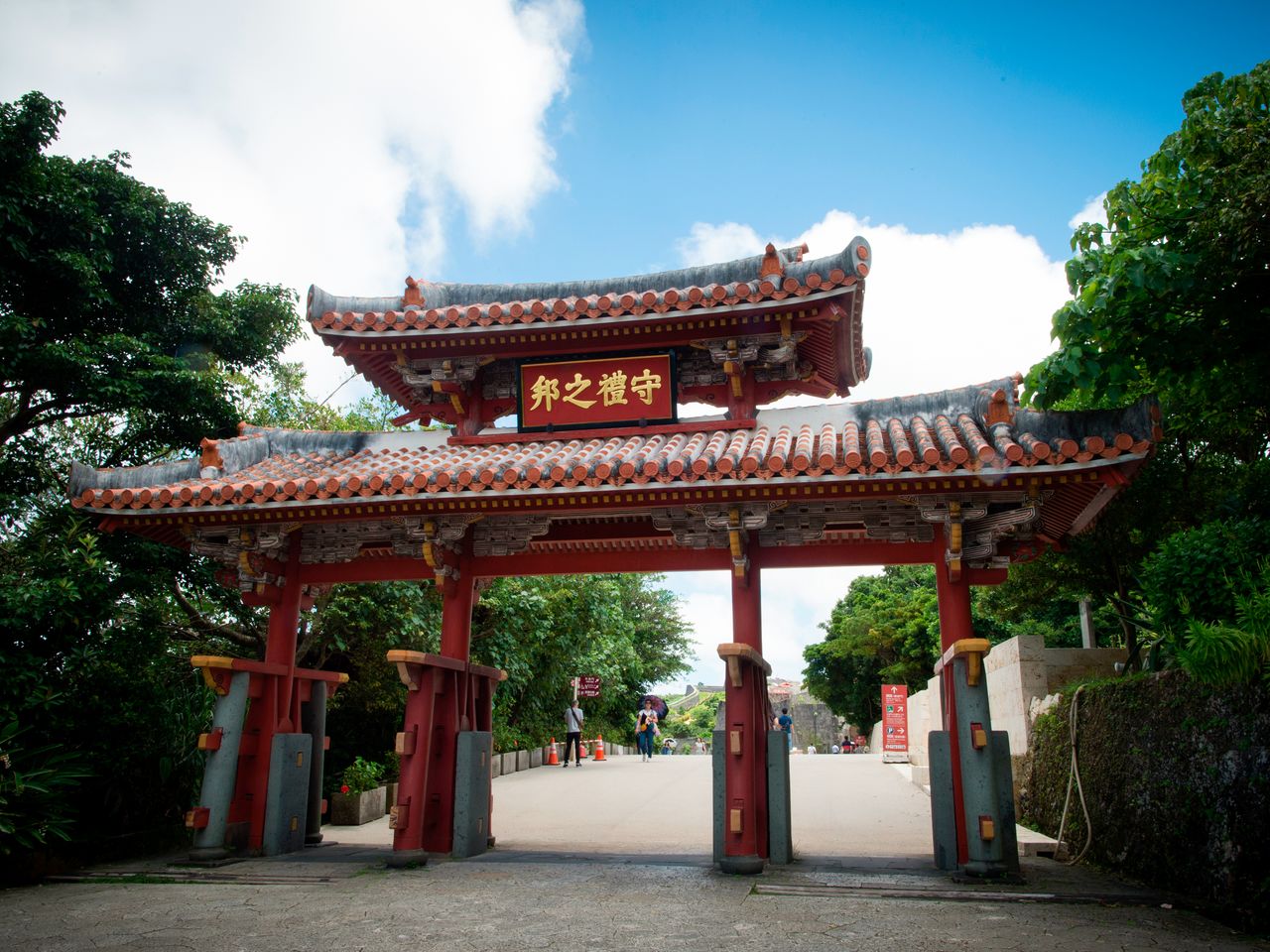 The famous Shureimon. The inscription on the gate, reading Shurei no kuni, marks Ryūkyū as a “realm where courtesy is honored.” 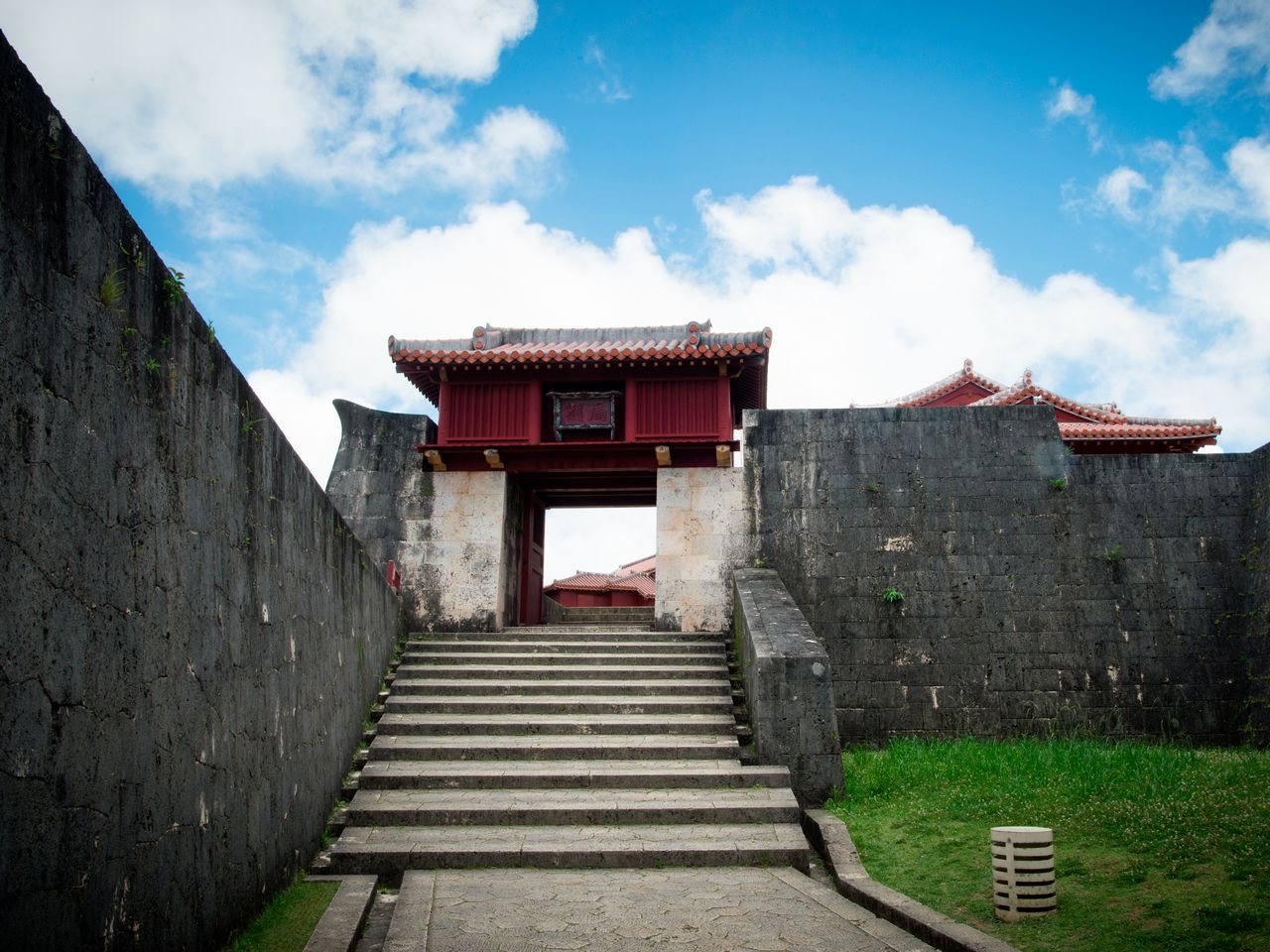 Shuri Castle’s many stone walls and gates bear Chinese influence, making them quite unlike anything you will find on the Japanese mainland. This gate, the Rōkokumon, included a mechanism measuring the passage of time with water flowing from a tank in its tower. 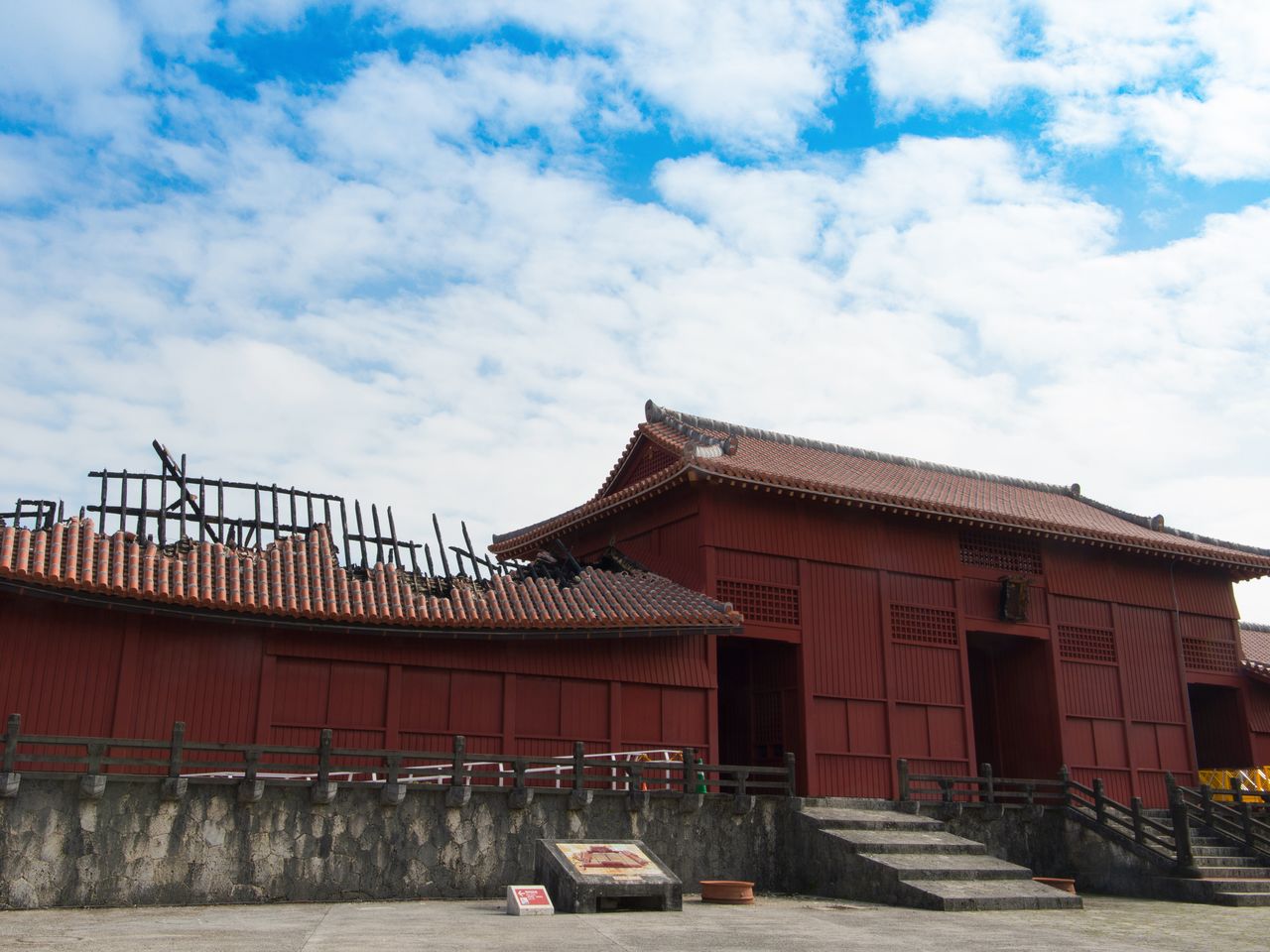 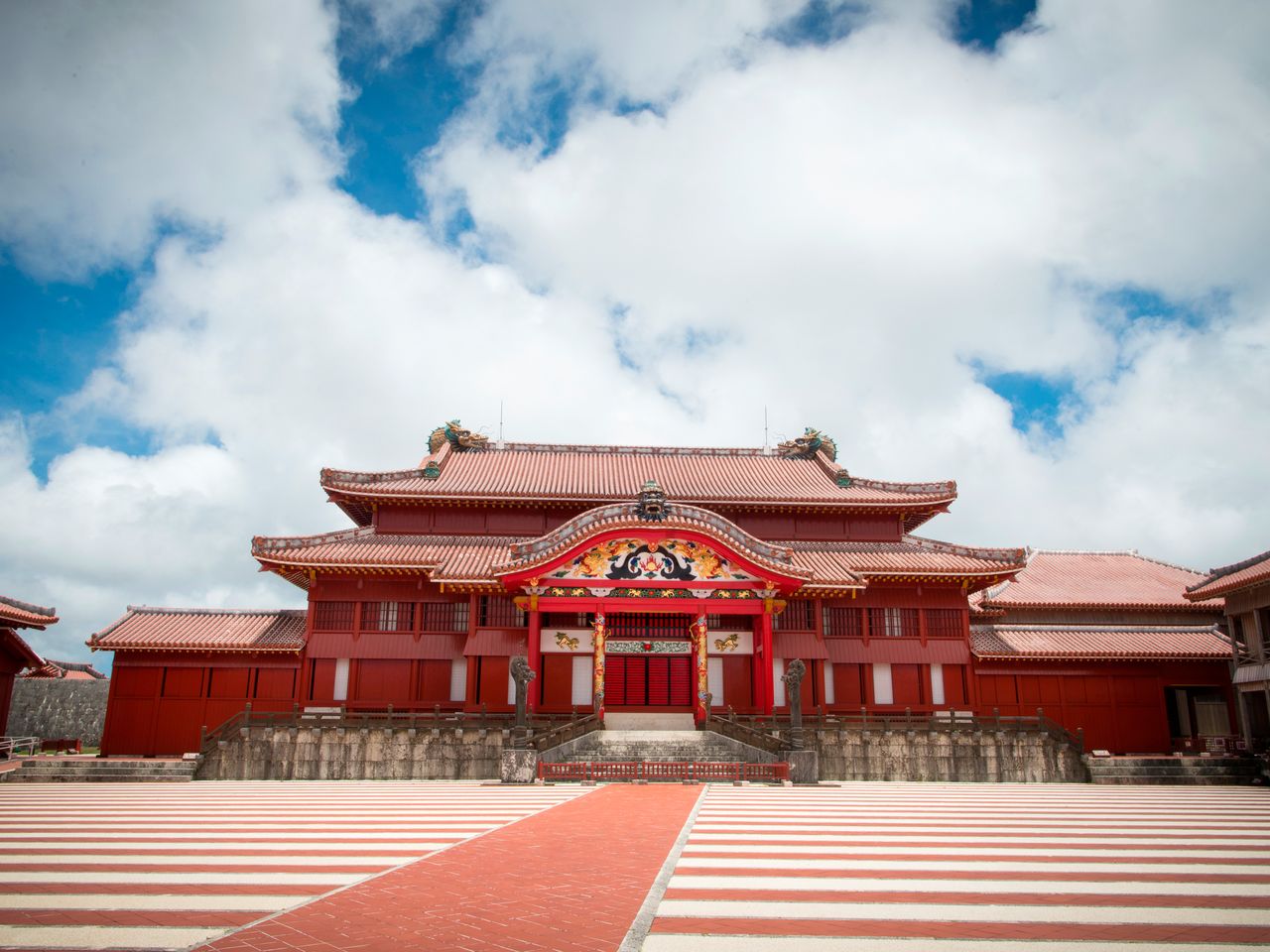 Shuri Castle before the fire. 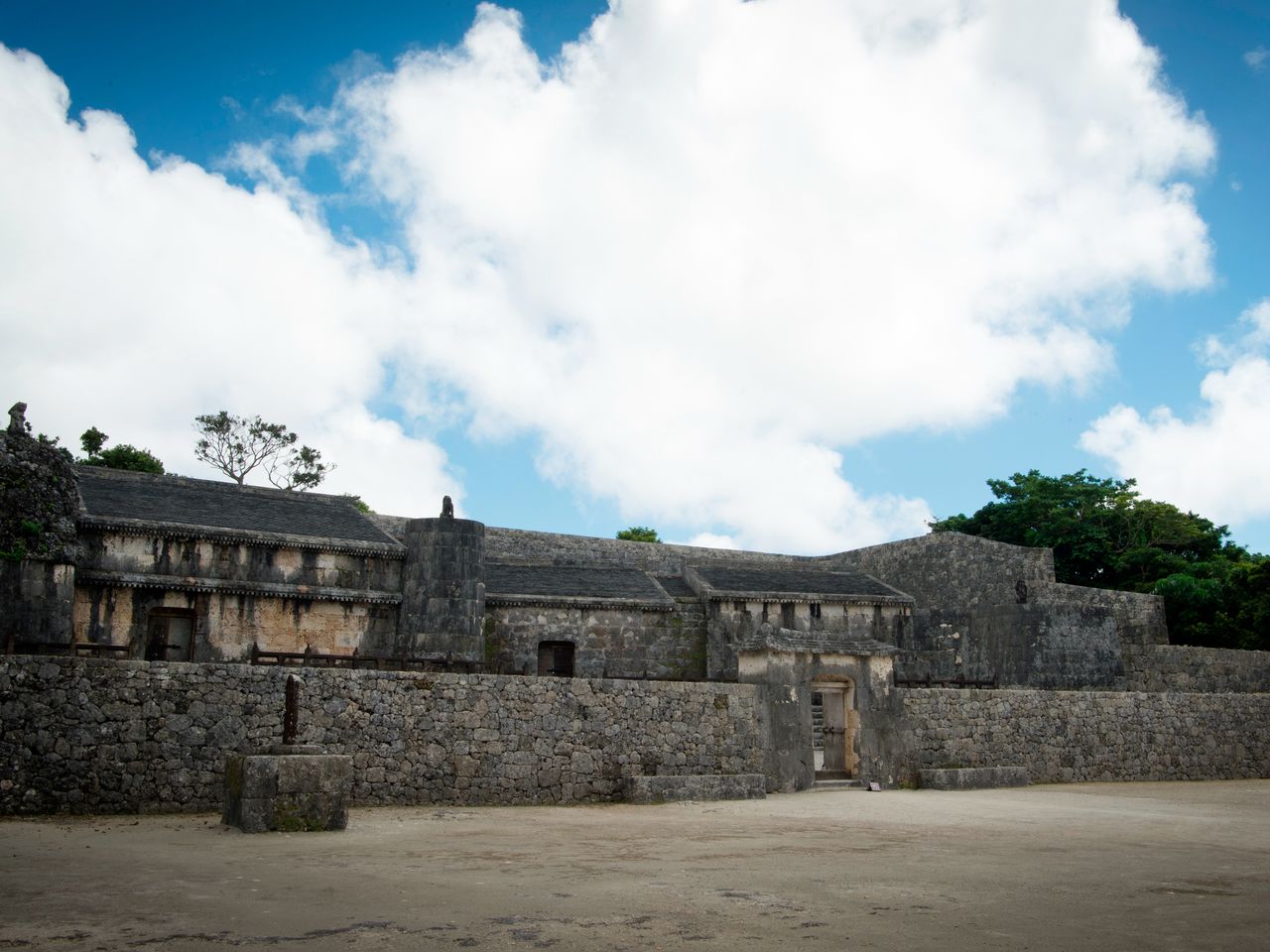 Tamaudun, the tomb of the second Shō Dynasty, covers an expansive 2,442 square meters.

The 1.6 km Kokusai-dōri is also referred to as Okinawa’s “miracle mile,” due to the fact that it was the first part of the devastated island to recover after the war. Visitors are recommended to get off at Makishi Station to access the north end of the street, and Kenchō-mae Station to get to the south end. In addition to souvenir shops, Kokusai-dōri has plenty of steakhouses serving Okinawan beef, as well as other bars and restaurants, and is recommended for those who want to enjoy local specialties.

Makishi is known for the Daiichi Makishi Public Market, which is crammed with Okinawan delicacies like colorful fish, pigs’ faces, and pigs’ feet. The market, which used to be popular for its retro vibe, is currently being relocated. Until the new premises open in or before March 2022, tourists can visit the temporary market operating at Nigiwai Hiroba, two minutes’ walk away. 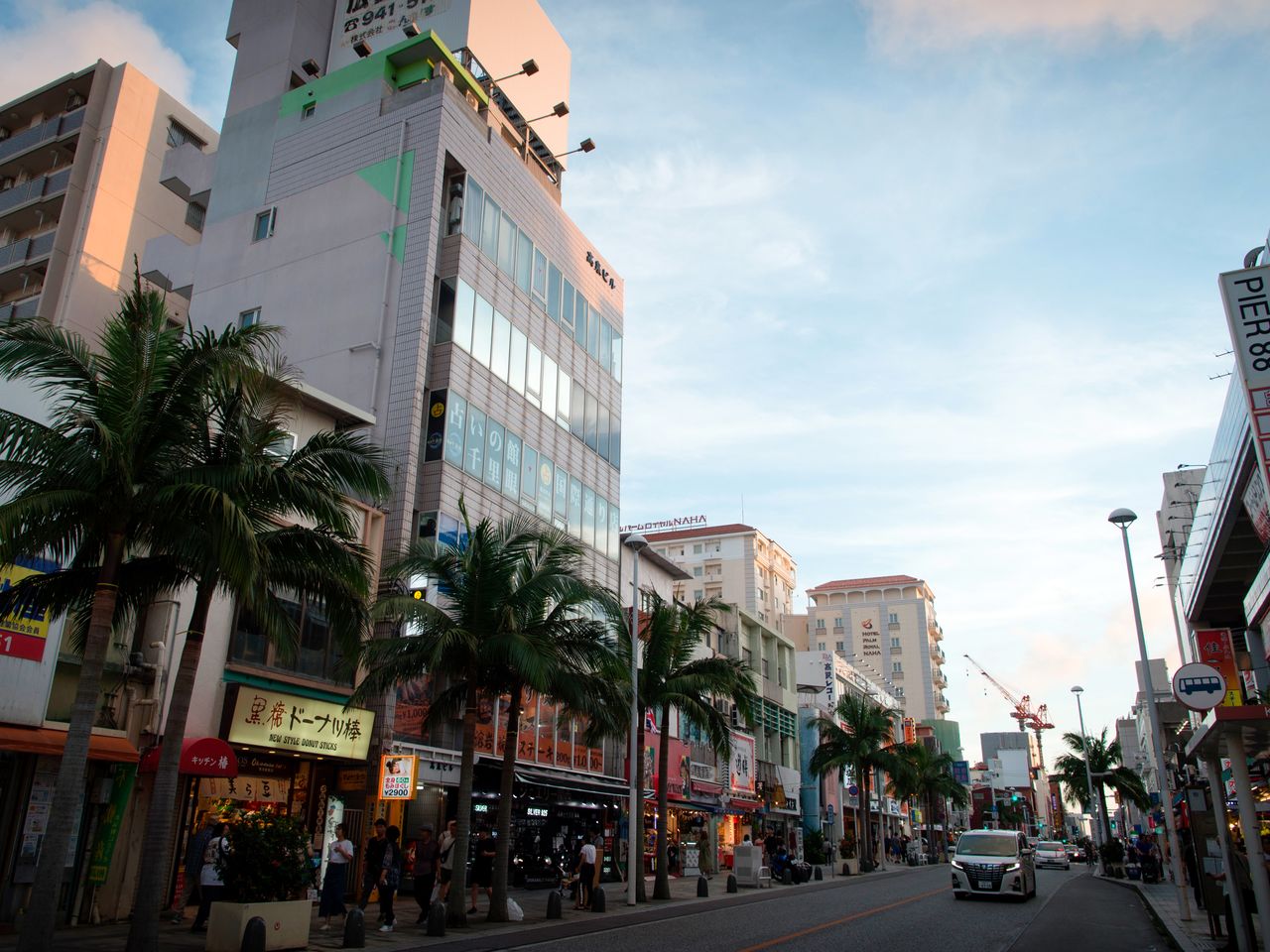 Check out the souvenir stalls and Okinawan cuisine on Kokusai-dōri. 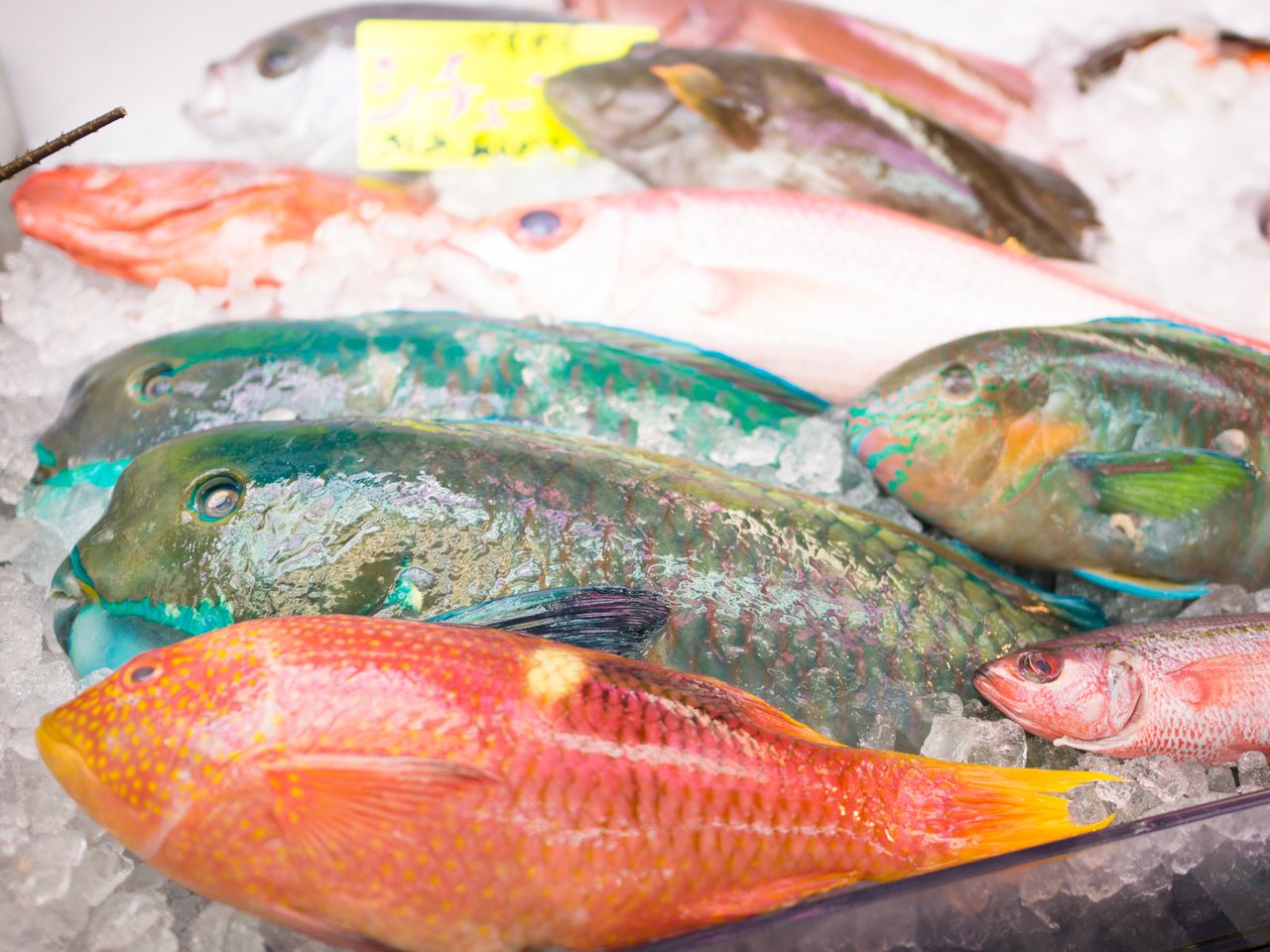 Select a colorful fish to be cooked and served on the spot at Makishi market.

From Asato Station, the popular Tsuboya Yachimun-dōri is only a 7-minute walk. Yachimun means “pottery” in Okinawan, and the solid earthenware on offer here has a simplicity evoking the mood of a tropical island, and is known for its bright and powerful designs. Potters who sell their pieces straight from the kiln, and the area also has a café where you can eat and drink off of earthenware utensils.

The area around Asato Station also boasts many goat soup restaurants. This is your chance to try the hearty soup and even goat sashimi, Okinawan specialties you will never find on the mainland! 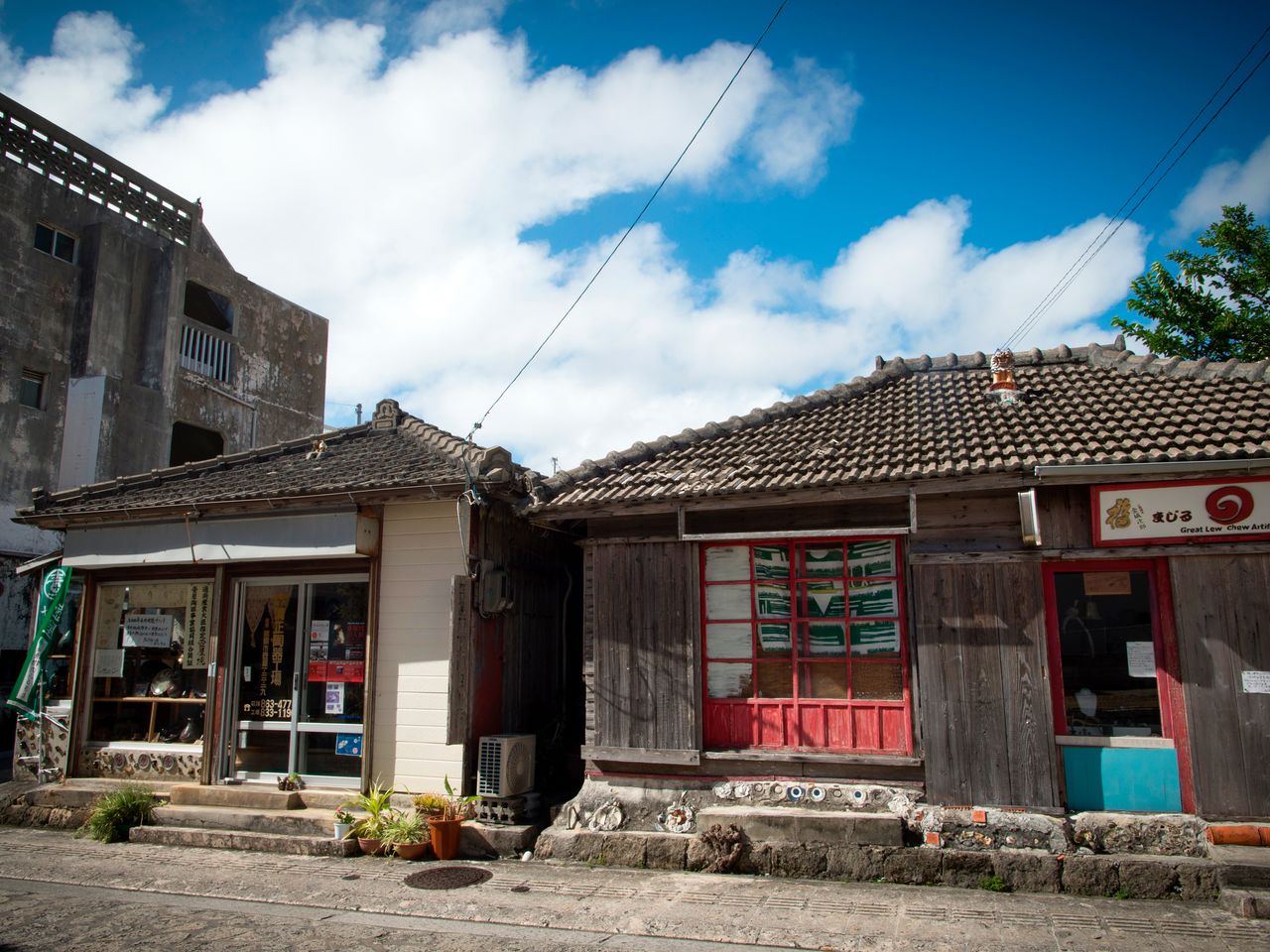 Much original architecture can be found on Yachimun-dōri. 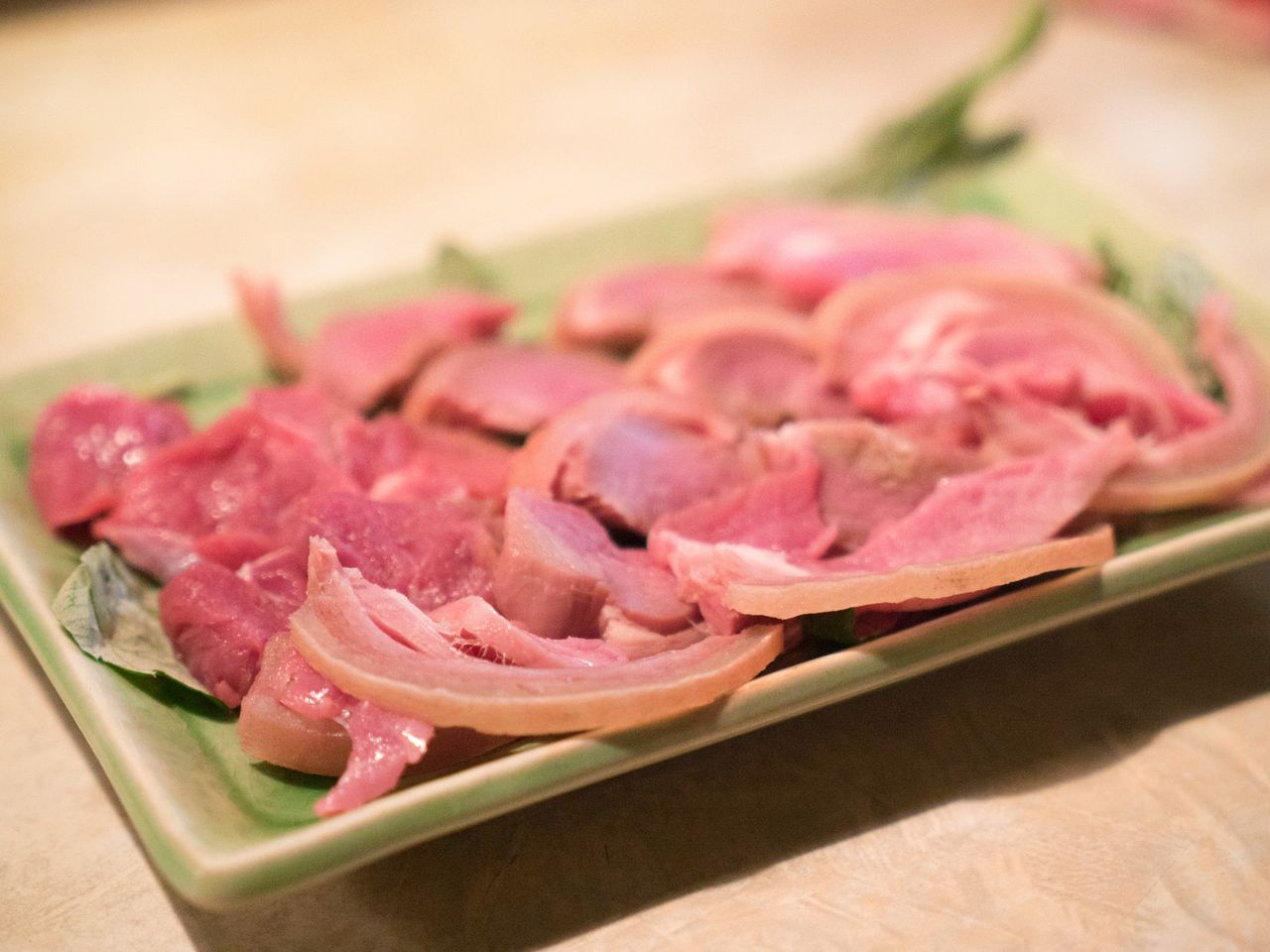 Goat sashimi can be addictive.

By spring, the Yui Rail will also accept Suica and other prepaid transportation cards, and plans are also underway to add a third carriage. What better way to see Naha than on the ever more convenient Yui Rail? 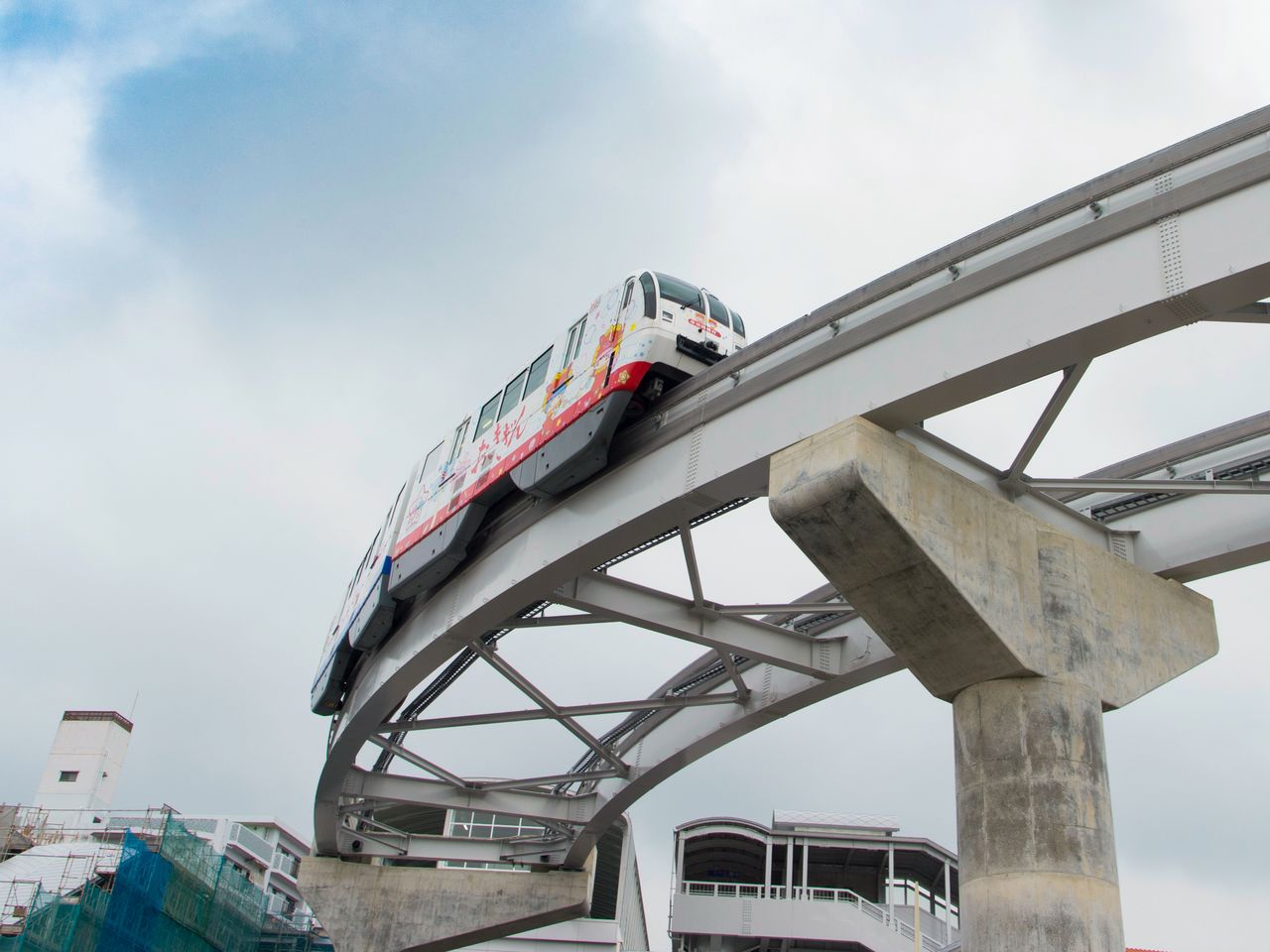 Plans are underway to add a third carriage as passenger numbers are projected to increase. 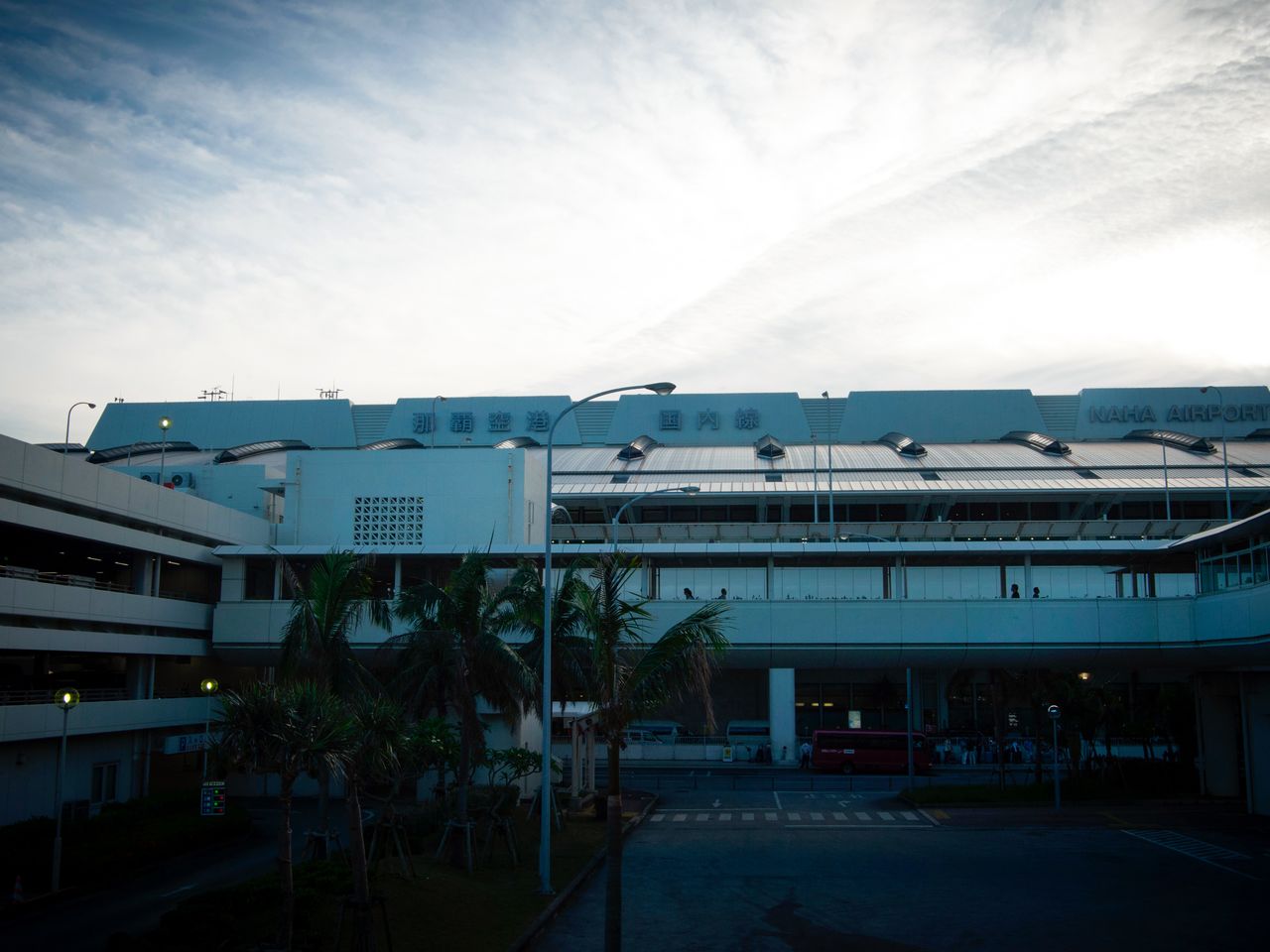 The monorail goes all the way to the airport, making it popular with tourists arriving in, or leaving, Okinawa.