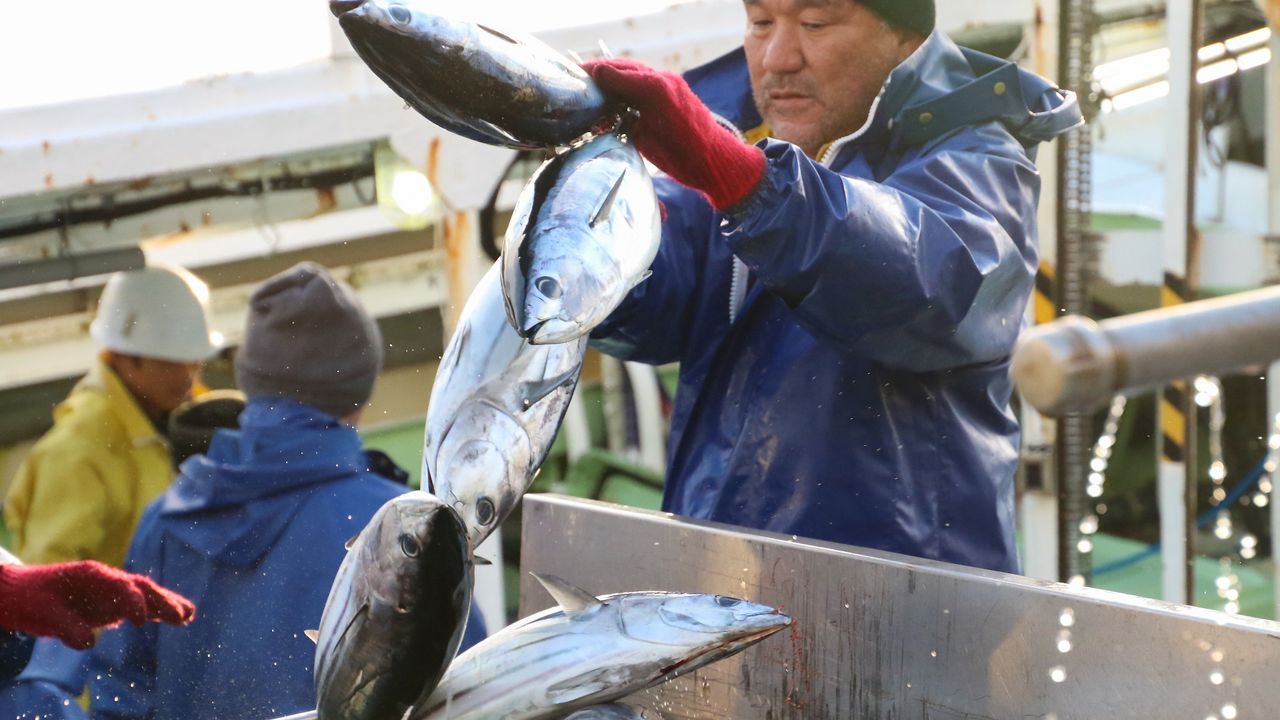 Lifestyle Food and Drink Apr 3, 2020
Spring and autumn are considered the two peak seasons for katsuo (bonito or skipjack tuna). Most recently, however, the Toyosu Market in Kōtō, Tokyo, has enjoyed brisk sales of unusual out-of-season winter catches of the popular fish. Referred to as mayoi-gatsuo (“lost” bonito), as opposed to the hatsu-gatsuo (“first” bonito) of early spring and the modori-gatsuo (“returning” bonito) of autumn, these unseasonal bonito sold for high prices at Toyosu last December, almost on a par with the highly prized tuna. Recent years have seen mayoi-gatsuo offered in sushi restaurants as a rare delicacy.

Bonito has been a part of the Japanese diet for centuries. The Japanese name katsuo can also be read to mean “man who wins,” an auspicious nomenclature that helped to make bonito especially popular in the Edo period (1603–1868). Particularly treasured were the early bonito of spring, a delicacy reputed to be worth “pawning your wife and children” to obtain. The haiku “Me ni wa aoba / yama hototogisu / hatsu-gatsuo” (The sight of green leaves, the song of the cuckoo in the mountains, the first bonito of the season), by the famed poet Yamaguchi Sōdō (1642–1716), suggests just how popular this delicacy was in the Edo period.

At the beginning of the new year, schools of bonito slowly make their way north from the warm seas around the southwestern islands of Kyūshū and the Okinawan archipelago to join other schools in the waters off the eastern Japan coast. Their arrival sometime in February is awaited by bonito fishing boats working out of Kyūshū, Shikoku, and Chiba in search of the prized fish. The broad area covered and the subsequent regional differences mean that the start of the hatsu-gatsuo season is not as clearly defined as, for example, it is for the first saury catches of Hokkaidō, referred to as hatsumono. Because of this, the term hatsu-gatsuo is generally understood to mean the first bonito caught before the start of spring.

As they migrate to the north Pacific, the bonito are still lean, growing and maturing as their journey progresses. By the autumn, when they reverse course to return south, they are plump with succulent fat. The bonito caught during this time off the Sanriku and Chiba coasts are called modori-gatsuo (returning bonito). Spring bonito is favored for its lean, delicate flavor, while autumn bonito is prized for its rich, red meat.

According to Ministry of Agriculture, Forestry, and Fisheries statistics compiled in 2018, Japan catches around 250,000 tons of bonito a year, the fourth largest volume after sardines, mackerels, and scallops. While the dramatic Tosa style of pole-and-line fishing is perhaps the oldest and best-known method of catching bonito, in most cases, whole schools of bonito are captured in large, sweeping nets. Bonito fishing boats are large craft equipped with freezers. The bonito are frozen as soon as they are caught and later transferred to refrigerated warehouses on land. Most of the bonito is processed, either dried to produce katsuobushi for making dashi, a broth essential to Japanese cuisine, or canned. 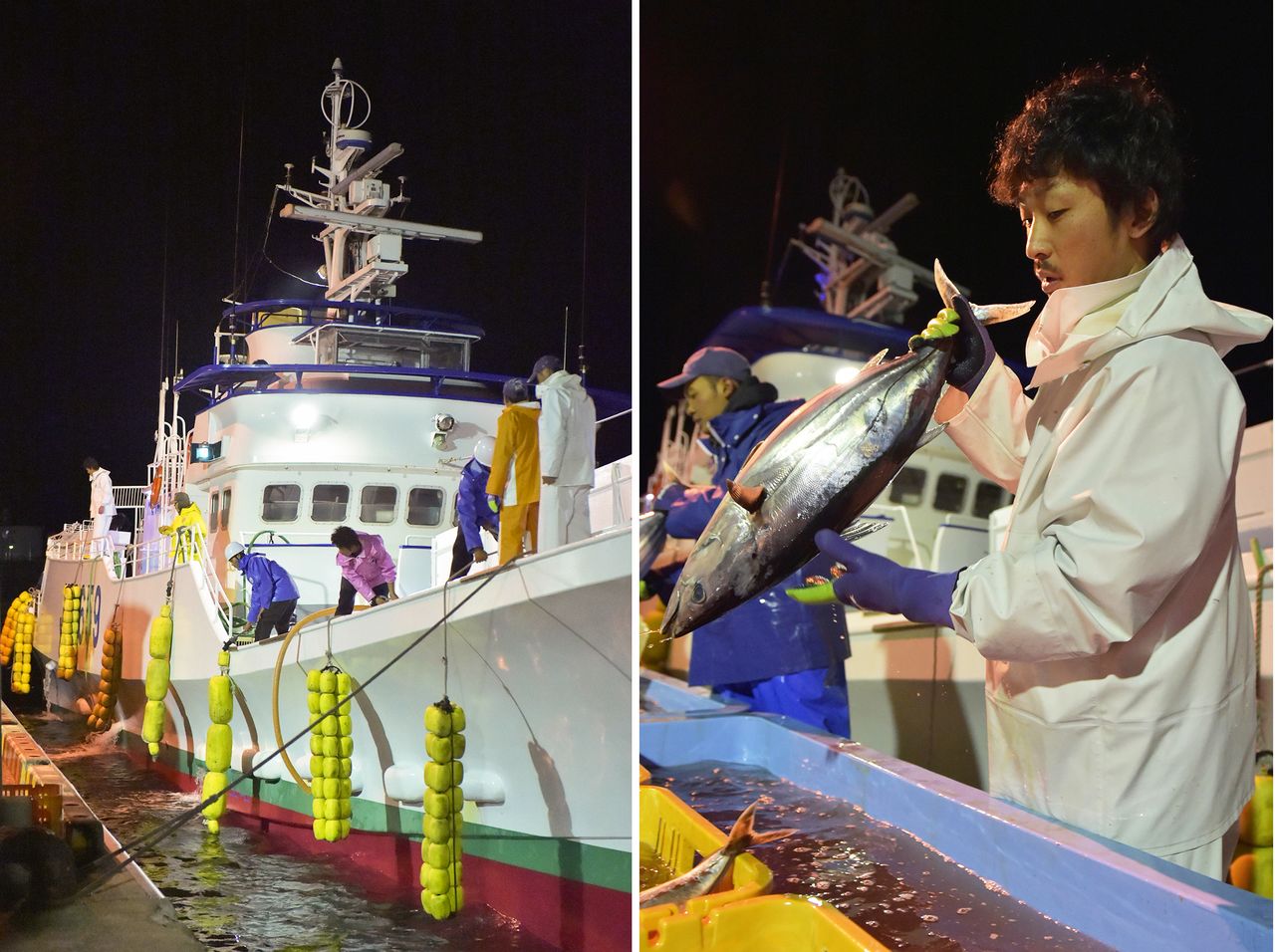 The large bonito brought into the ports of Makurazaki in Kagoshima and Yaizu in Shizuoka are especially prized for making katsuobushi. While fatty bonito is preferred for eating raw as sashimi, bonito to be dried and preserved as katsuobushi should be lean and not have too much fat.

The traditional method of processing bonito for katsuobushi involves filleting, boiling, smoking, and then coating the fish fillets with a special mold and leaving them to dry, the last two steps in the process being repeated several times. The final product is a hard block of bonito fillet called arabushi that is shaved into flakes using a special shaving block to make dashi stock, an essential ingredient for many Japanese dishes. Today, much of the process has been shortened—often skipping the mold application—and the flakes are pre-packaged for commercial sale. 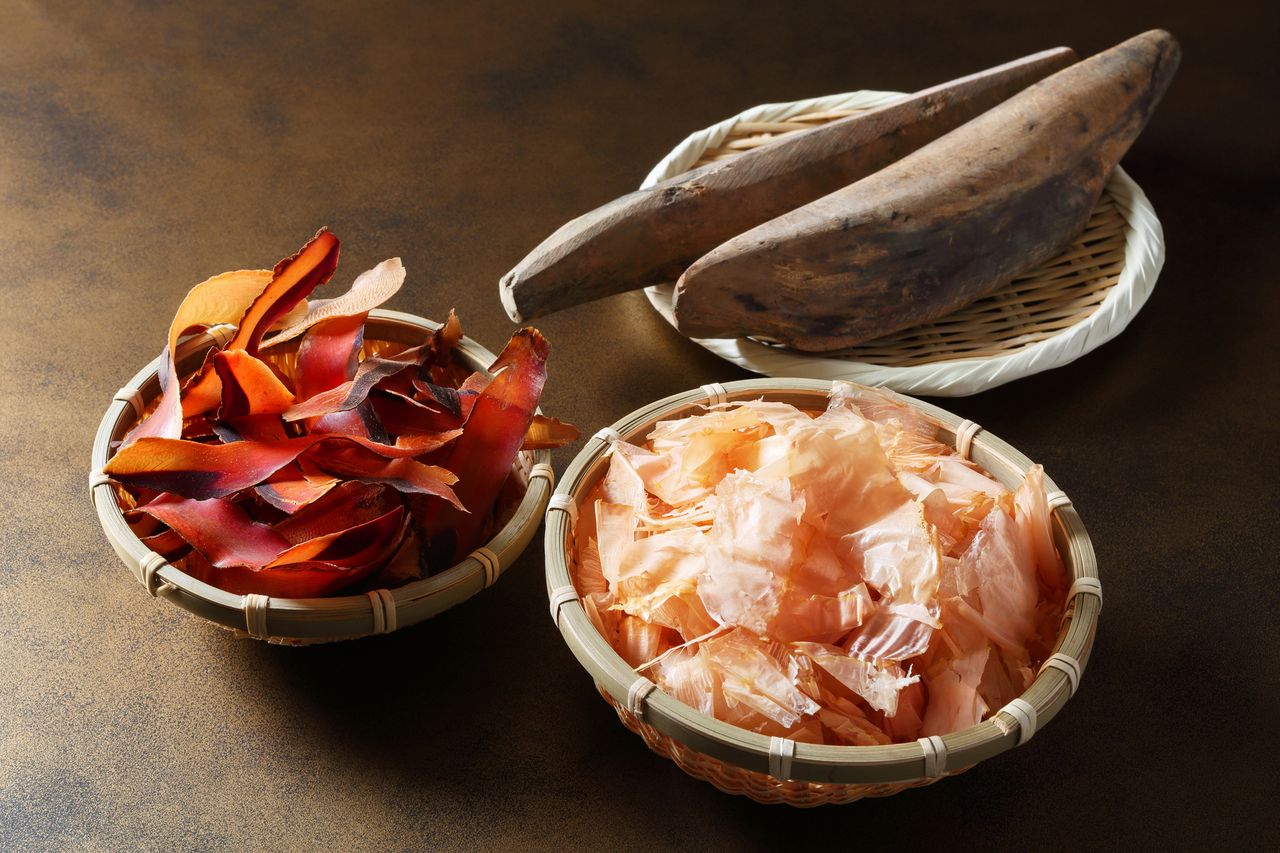 Bonito, also known as skipjack tuna, is also processed into canned tuna. Many Japanese assume canned tuna is exclusively bluefin tuna, but this product is actually made from a variety of tunas, including yellowfin, albacore (longfin tuna), and bonito. As a matter of fact, most bonito in Japan is flaked or canned, with only a small percentage reserved for consumption as sashimi and katsuo tataki (seared bonito). 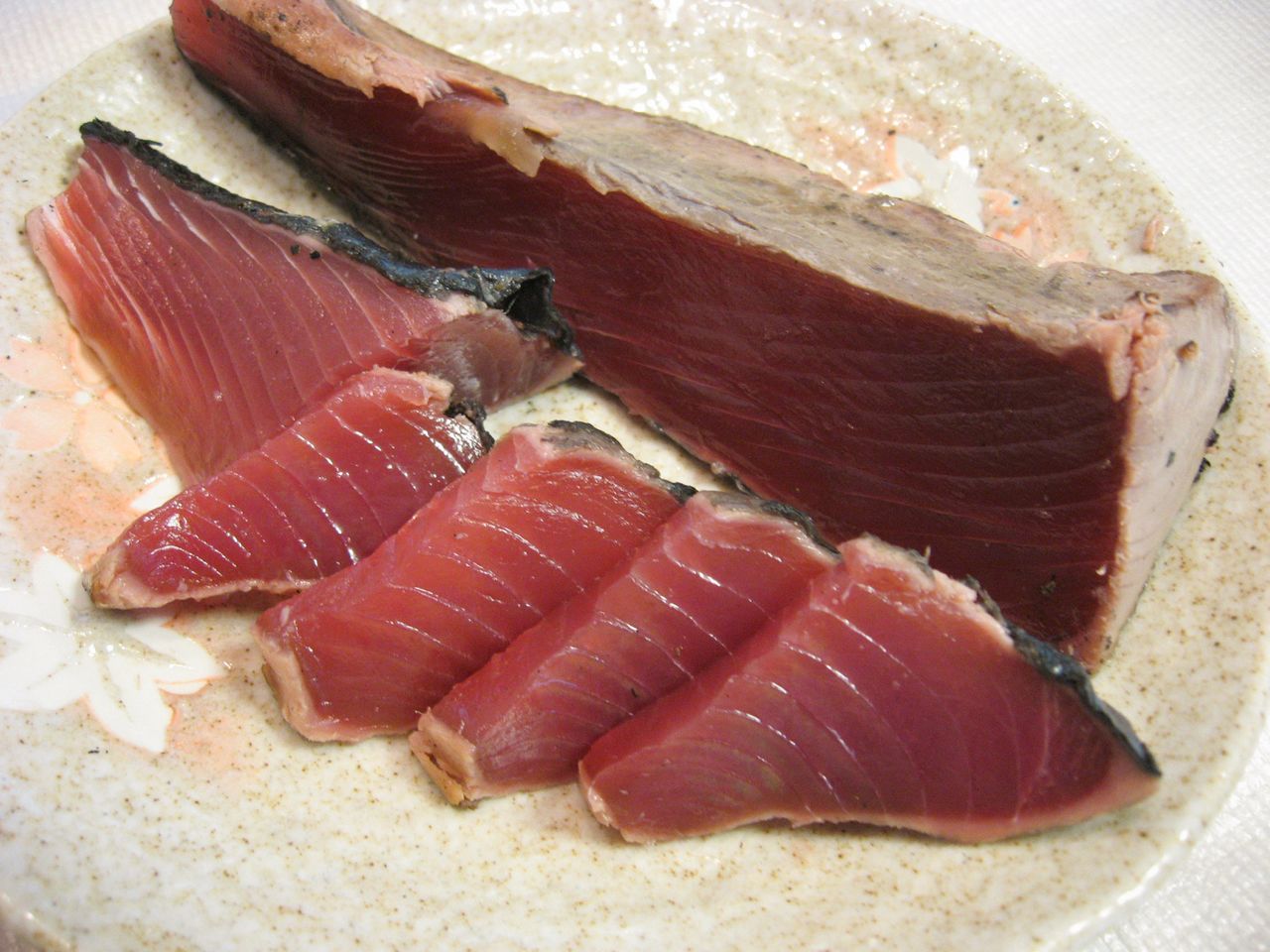 Seared bonito from Kōchi used to be a rare delicacy only enjoyed by a few, but today can be purchased at supermarkets throughout Japan. (© Jiji Press)

Bonito “Lost” in the Sea of Japan

Spring and autumn bonito are generally caught in the Pacific by fishing boats working out of ports in Kōchi, Shizuoka, Chiba, and Miyagi. The out-of-season winter bonito referred to at the start of this article are mostly from the Sea of Japan, off the coasts of Niigata and Toyama prefectures.

Researchers speculate that as the schools of bonito migrate north from the southern Pacific waters around the Okinawan archipelago far below Kyūshū, they split up along the way, with some schools moving into the Sea of Japan. Why this happens is not well known, but at the Toyosu Market in Tokyo, winter bonito from the Sea of Japan is referred to as mayoi-gatsuo, “lost” bonito.

Around late November, a few winter bonito start appearing in fixed fishing nets intended to catch buri, a species of yellowtail also known as Japanese amberjack, although the fishermen working out of Himi Port in Toyama say such appearances are rare. In December 2019, the small volume of winter bonito brought to market fetched higher prices than the winter yellowtail (kanburi) for which Himi is famous. Likewise, at ports on Niigata’s Sado Island, the rare catch of winter bonito is treated with special care to keep the fish fresh as they are shipped out to market.

At the Toyosu Market in Tokyo, winter bonito are among the first to be auctioned off to wholesalers in the early morning hours. Winter bonito were also sold at the old Tsukiji fish market, but since the move to Toyosu, the out-of-season bonito has grown in popularity and prices have gone up accordingly. In early December 2019, the wholesale price for winter bonito exceed ¥7,000 per kilogram, putting the novel fish on a par with the high-grade Ōma tuna from Aomori Prefecture. 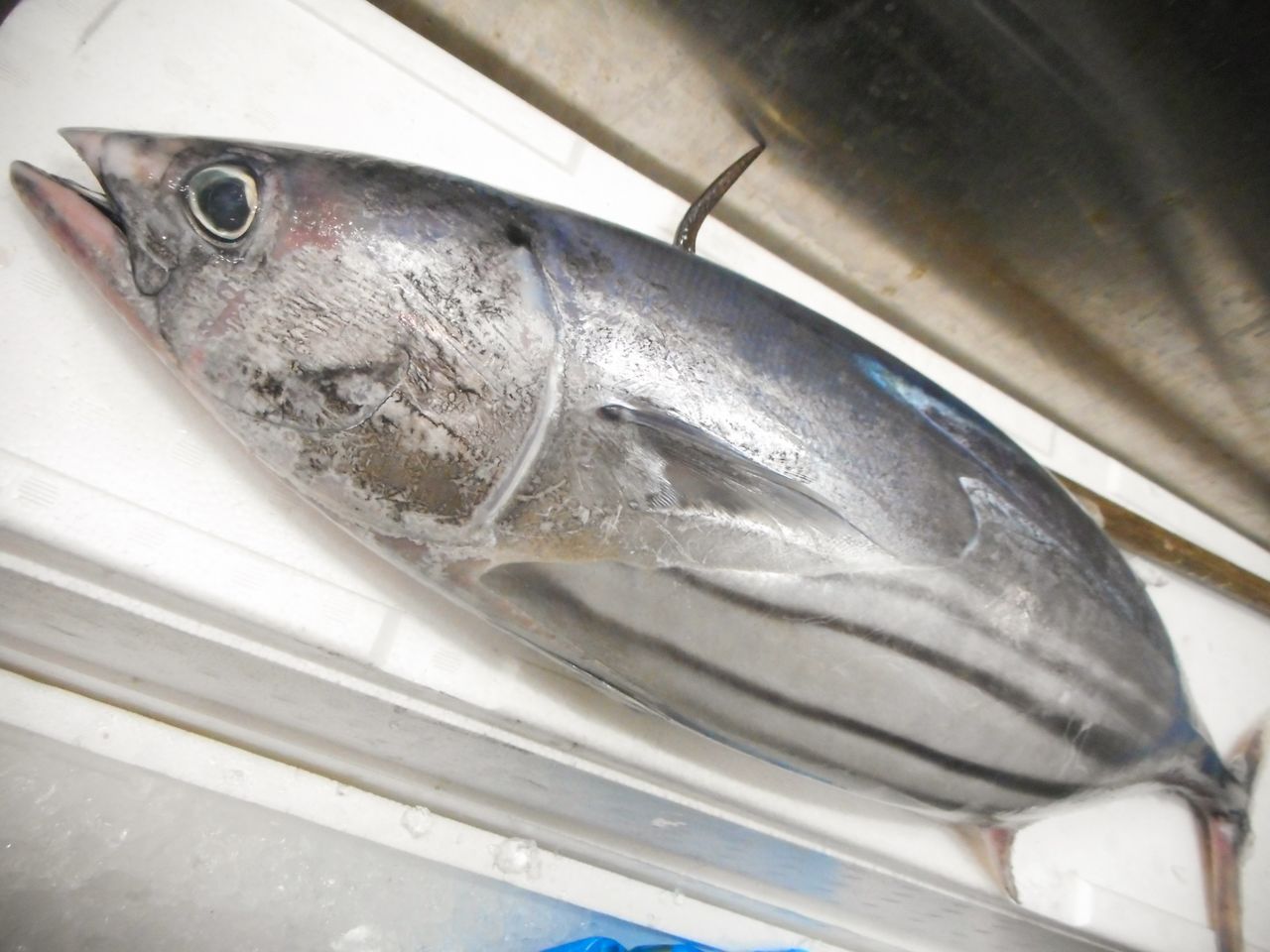 High-grade winter bonito from the Sea of Japan at the Toyosu Market. December 2019. (Photo by the author)

Why has out-of-season bonito come to command prices more than five times those for the same fish caught in spring and autumn? The answer lies in the growing demand for winter bonito from luxury sushi restaurants and fresh fish shops in Tokyo. Inquiries at the Toyosu Fisheries Wholesale Market led us to a number of these, the first being Sushi Ryūjirō, a prestigious sushi restaurant in Tokyo’s Minami Aoyama neighborhood. Chef Nakamura Ryūjirō serves winter bonito in full-course meals priced at ¥25,000 and above. Winter bonito, says Nakamura, “has a full layer of fat under the skin that gives the delicacy a rich, sweet flavor.” 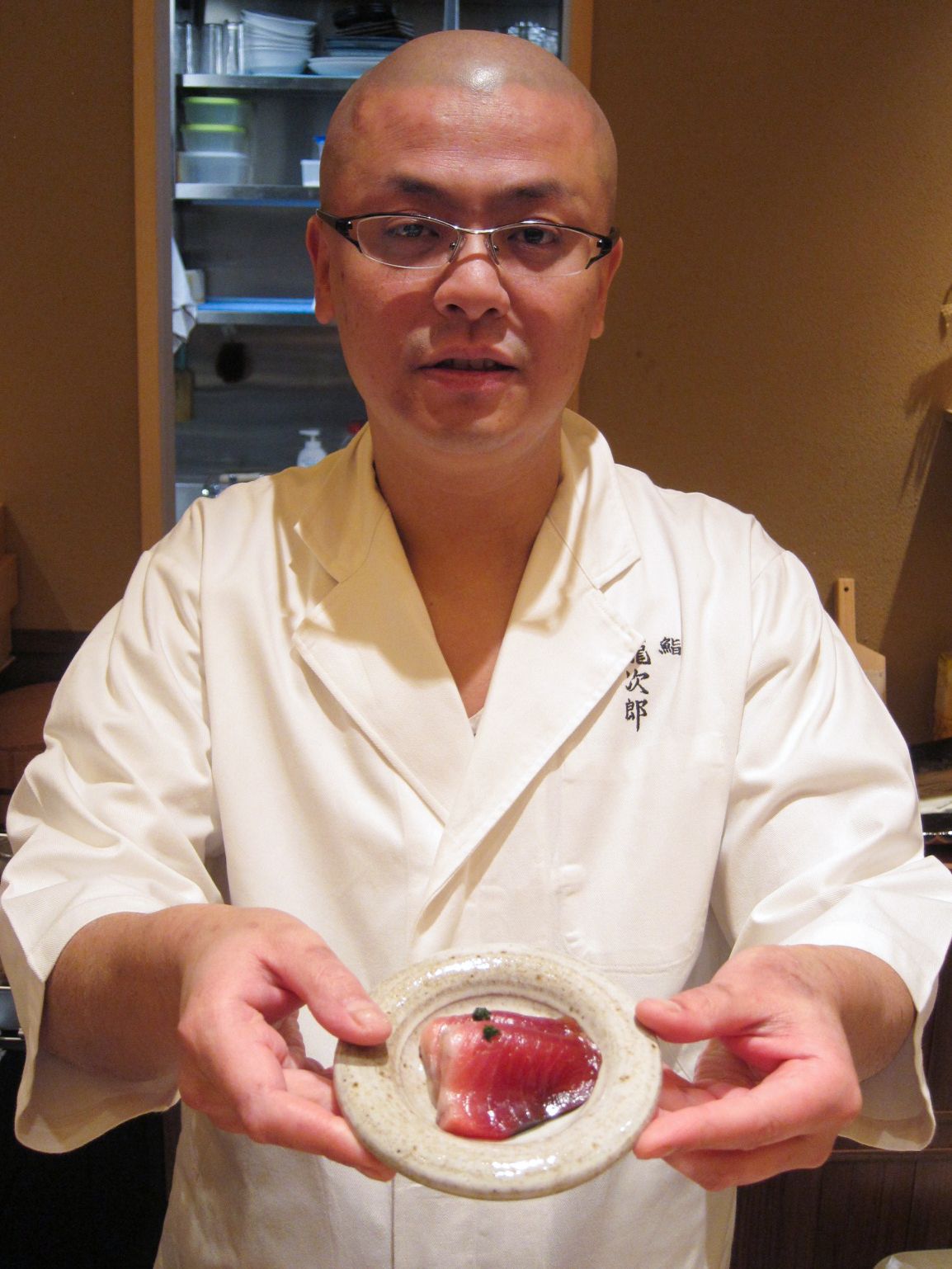 Another deluxe sushi restaurant in Tokyo’s fashionable Ginza district includes winter bonito as the main dish in its ¥30,000 full-course meal. Says the restaurant owner, “More and more customers are asking for winter bonito. It’s become a regular on our menu for the season, along with fresh tuna and sea urchin roe.”

Nezu Matsumoto, a specialty fish shop in Chūō, Tokyo, is known for its offering of top-quality fish such as Ōma tuna. Owner Matsumoto Hideki says winter bonito is a favorite among his customers. “Winter bonito is especially delicious. We always make sure to get a shipment from the Toyosu Market whenever it’s available there.” A dish of six slices of winter bonito sashimi sold for around ¥3,000 in December 2019.

Winter bonito continues to be fished in the Sea of Japan which is always a few degrees colder than the Pacific in the winter. Though the volume is small, winter bonito can be found at the Toyosu Market at the start of the new year, a popular, high-end delicacy. We urge you to give it a try. 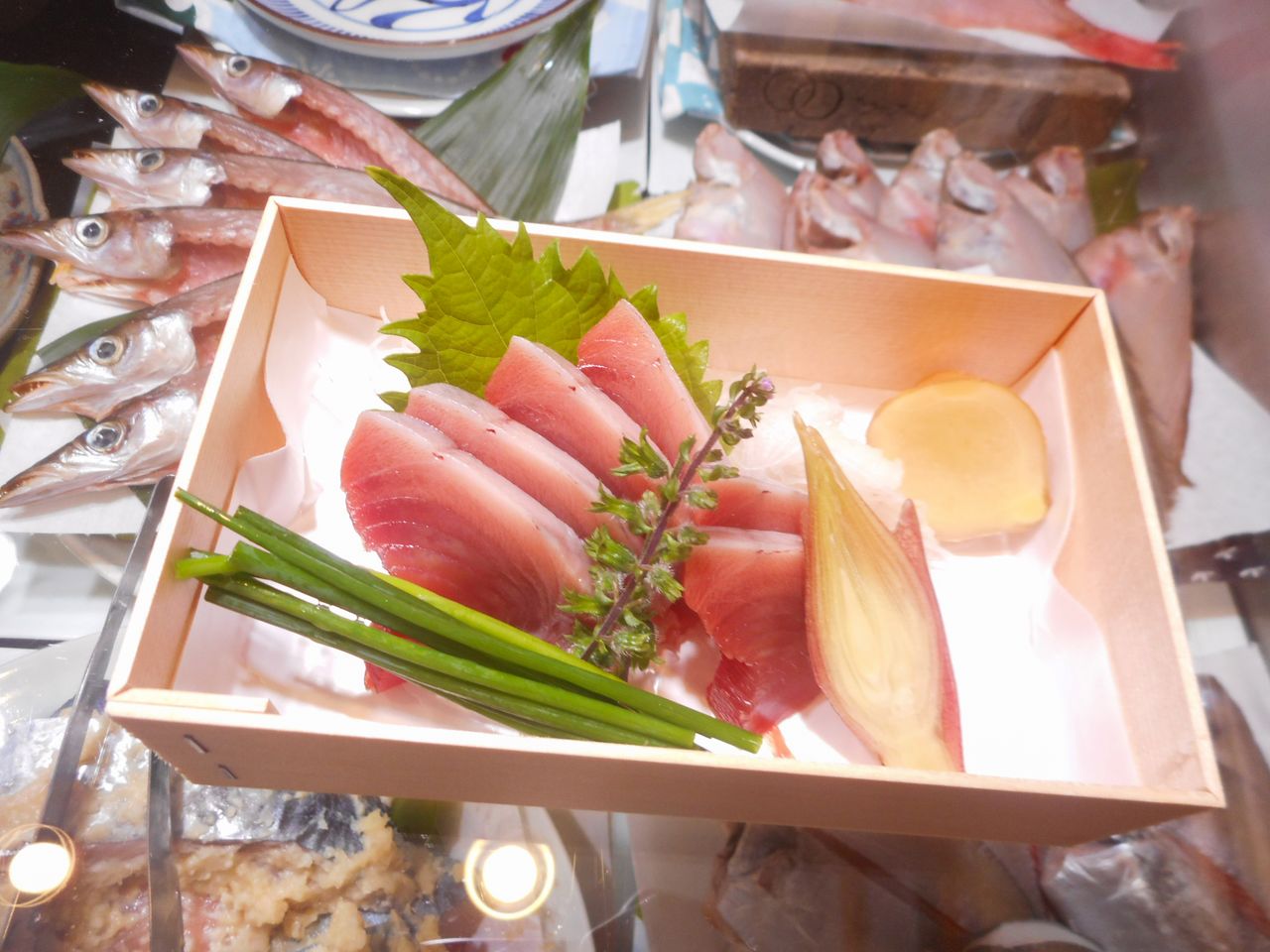 Six slices of freshly prepared winter bonito sold at the Nezu Matsumoto fish shop for around ¥3,000 in December 2019. (Photo by the author)