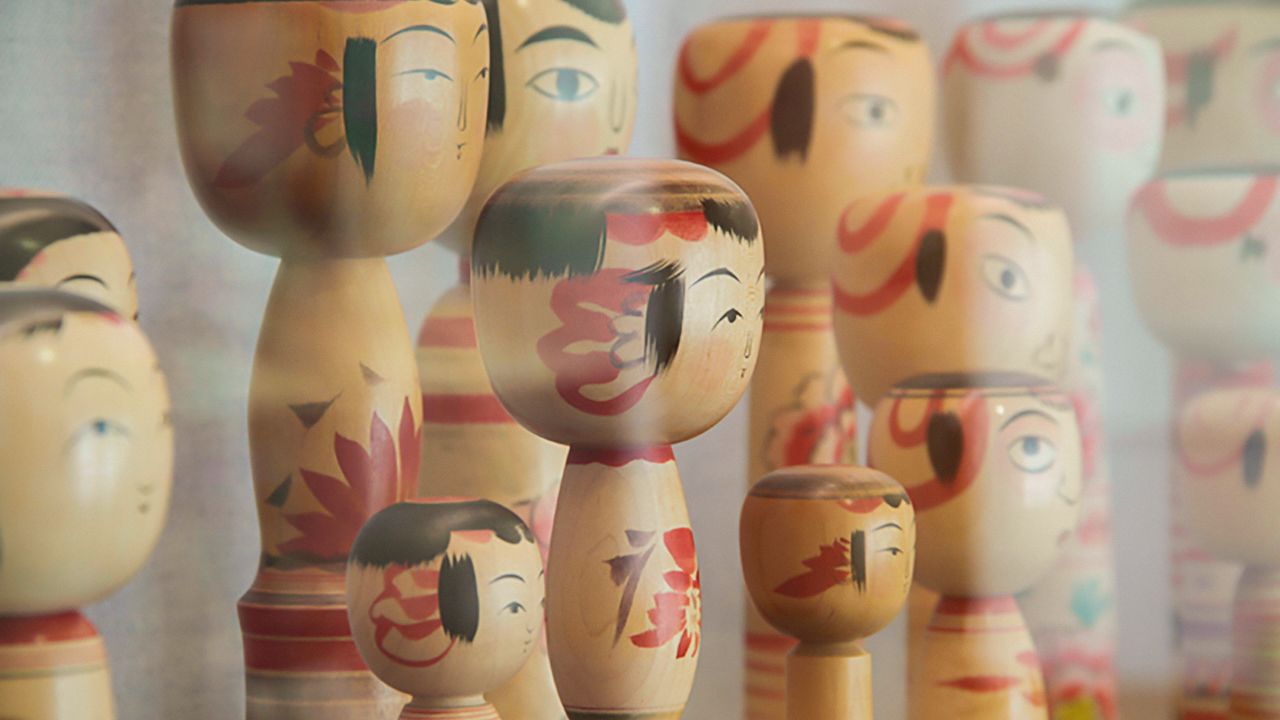 Travel Apr 10, 2020
Visit a hot spring in Japan’s northern Tōhoku region and you will see kokeshi dolls everywhere. These cylindrical wooden toys appeal to people of all ages and have won increasing favor with foreign visitors too. While their popularity has waxed and waned over the years, kokeshi are now enjoying a renewed surge of interest. A look at the history of kokeshi and the styles produced in various parts of Tōhoku.

Kokeshi Both Traditional and Novel

Kokeshi, produced in many hot spring towns of the Tōhoku region, originated in the latter part of the Edo period (1603–1868) when artisans making wooden bowls and trays on horizontal lathes similar to potter’s wheels began using leftover wood to make children’s toys. Kokeshi were originally quite small, to make them easy for young children to grasp. But as kokeshi began to be sold as souvenirs to visitors taking a hot spring cure, they became quite popular, and onsen towns started producing them in various sizes and shapes and decorating them with distinctive touches. 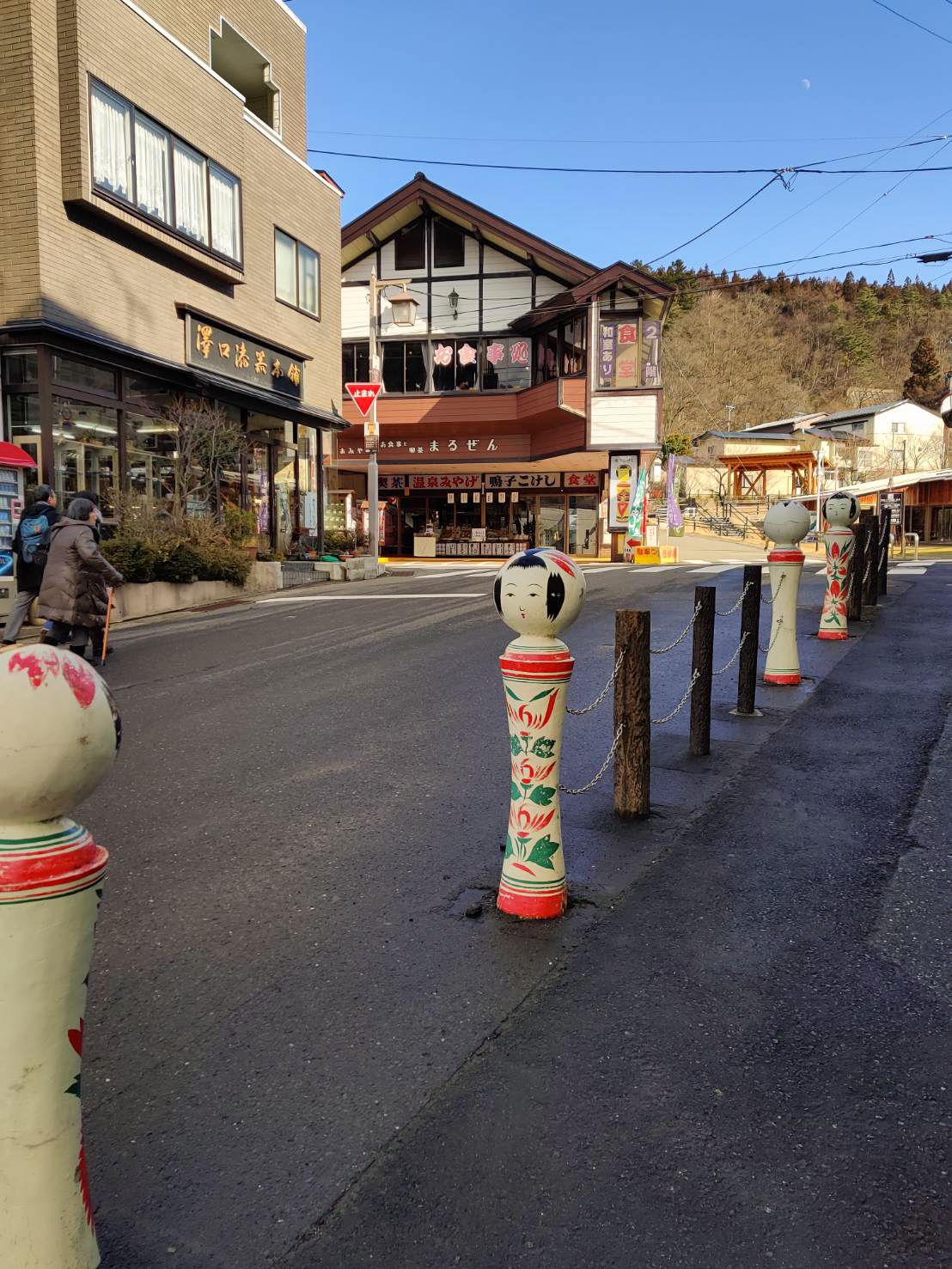 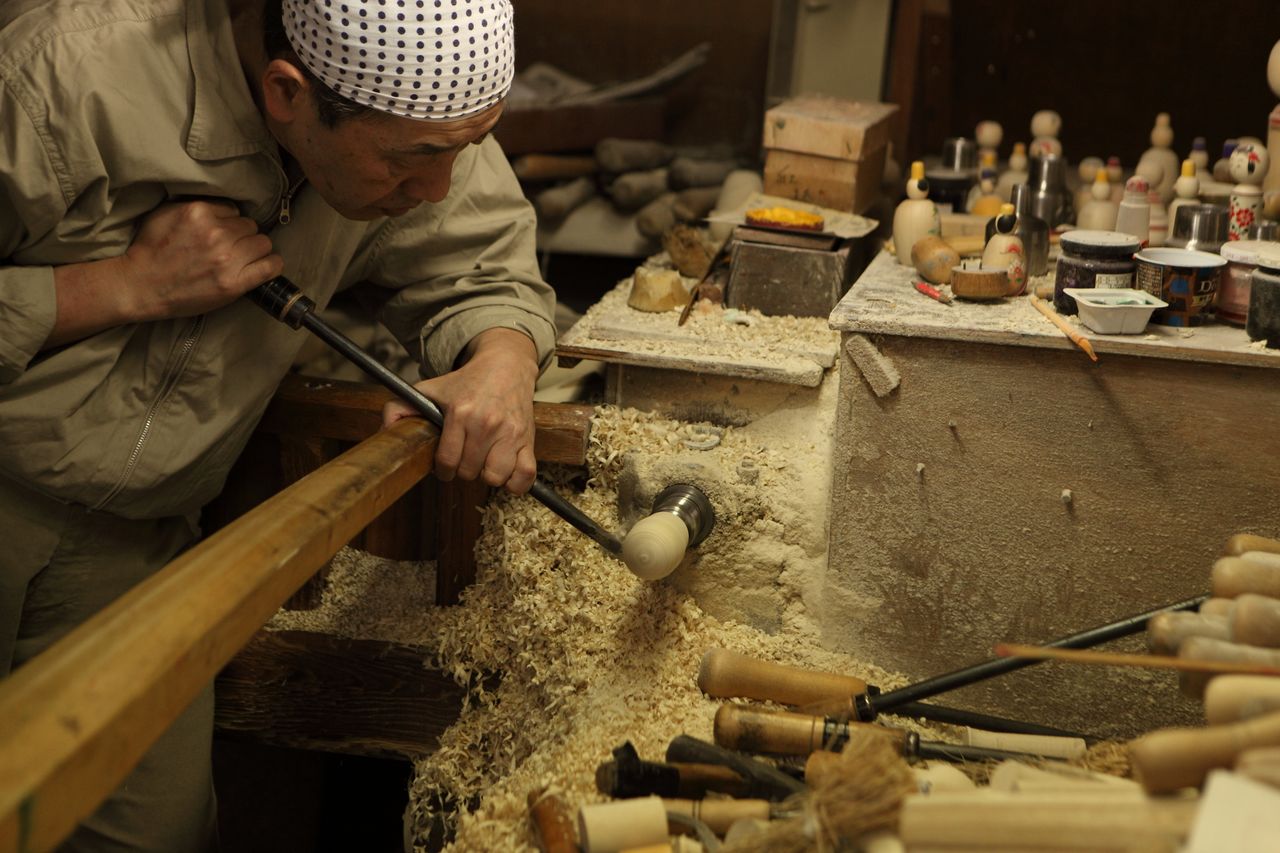 Carving a kokeshi at Sakurai Kokeshi Shop. Here, visitors can try their hand at painting a design onto their own kokeshi.

Japan’s first magazine dedicated to kokeshi, published in the early Shōwa (1926–1989) years, lauded the dolls both as a traditional craft and as works of art, and they enjoyed a wave of popularity. A further kokeshi boom ensued during the years of red-hot economic growth in the late 1960s, when people flocked to Tōhoku area onsen and came away with kokeshi as souvenirs.

Nowadays, kokeshi are enjoying another wave of popularity, driven mainly by young women. These women—who call themselves kokeshi joshi—avidly search out not just traditional dolls but also collect new, creative forms of the art. The most popular new variety features kokeshi with a three-dimensional o-kappa, or bob-cut hairstyle, but kokeshi in the form of animals or anime characters are also common. 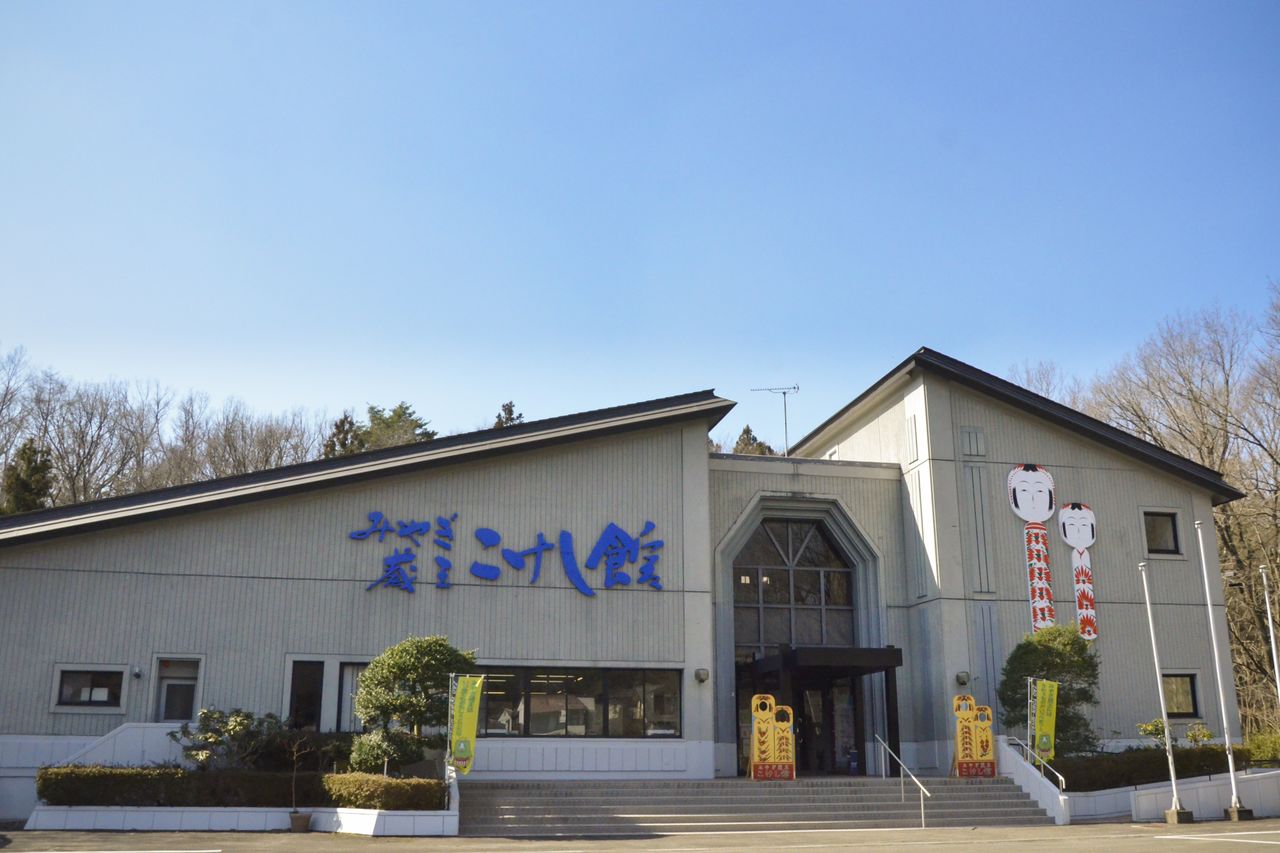 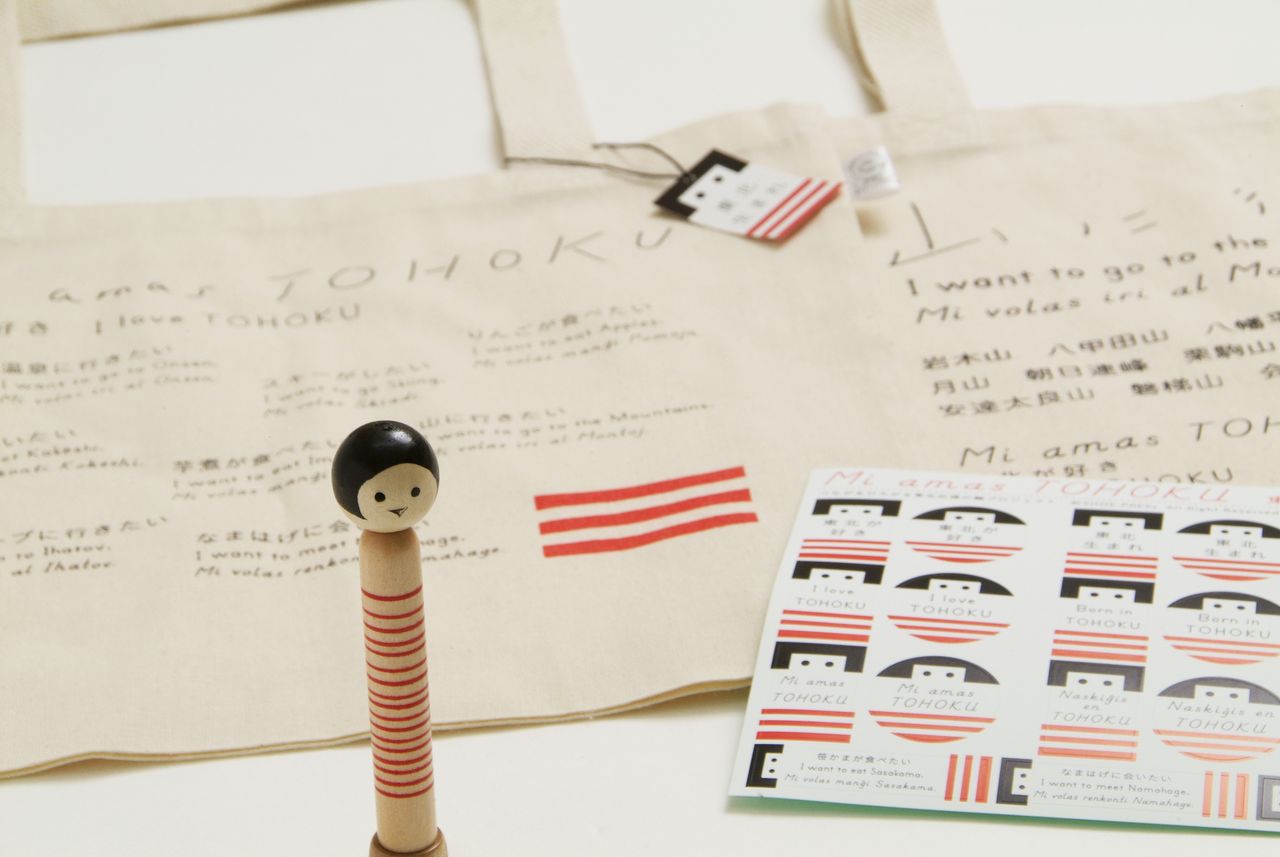 Kokeshi designs feature on all sorts of souvenir items.

Easily the most striking version these days is the kokeshi airplane, created in 2015. Described as “weird but cute,” this kokeshi has been officially recognized by the Miyagi Prefectural Tourism Department and has featured several times on posters advertising domestic airlines.

The influx of visitors from abroad has also made kokeshi quite popular outside Japan, particularly in Europe, where growing numbers of people with an appreciation of their simple lines and Japanese motifs collect kokeshi. 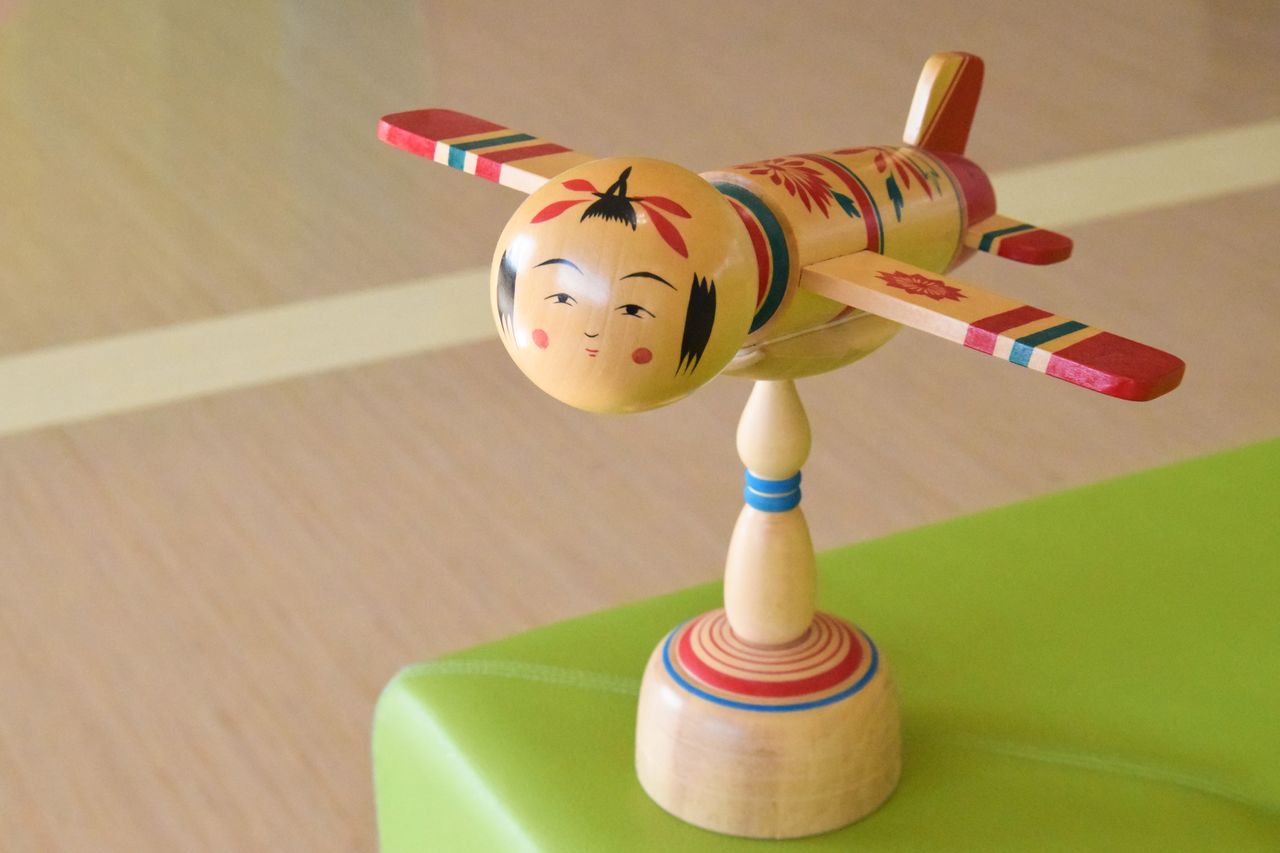 An airplane-shaped kokeshi on display at the Miyagi Prefectural Office.

In the late Edo period, the onsen of Tōhoku were popular among farmers, who visited in the off season to rest their weary bones. Artisans producing kokeshi learned that there was demand for their wares among these visitors and began coloring their creations, which until then had been plain wood. Red was the predominant color, used in the belief that it had the power to ward off evil and counteract smallpox and other maladies prevalent at the time. Reenergized by the healing onsen waters, farmers took these traditional kokeshi back to their villages as talismans and as lucky charms to ensure a bountiful harvest. Kokeshi given to children as toys carried with them the hope that the children would grow up strong and healthy.

There are various theories as to the origin of the word kokeshi, which were also called kogesu, kiboko or deko, depending on their place of origin. At a 1940 gathering of artisans and collectors, participants agreed to standardize on the name kokeshi, which is what the dolls have been called since then. 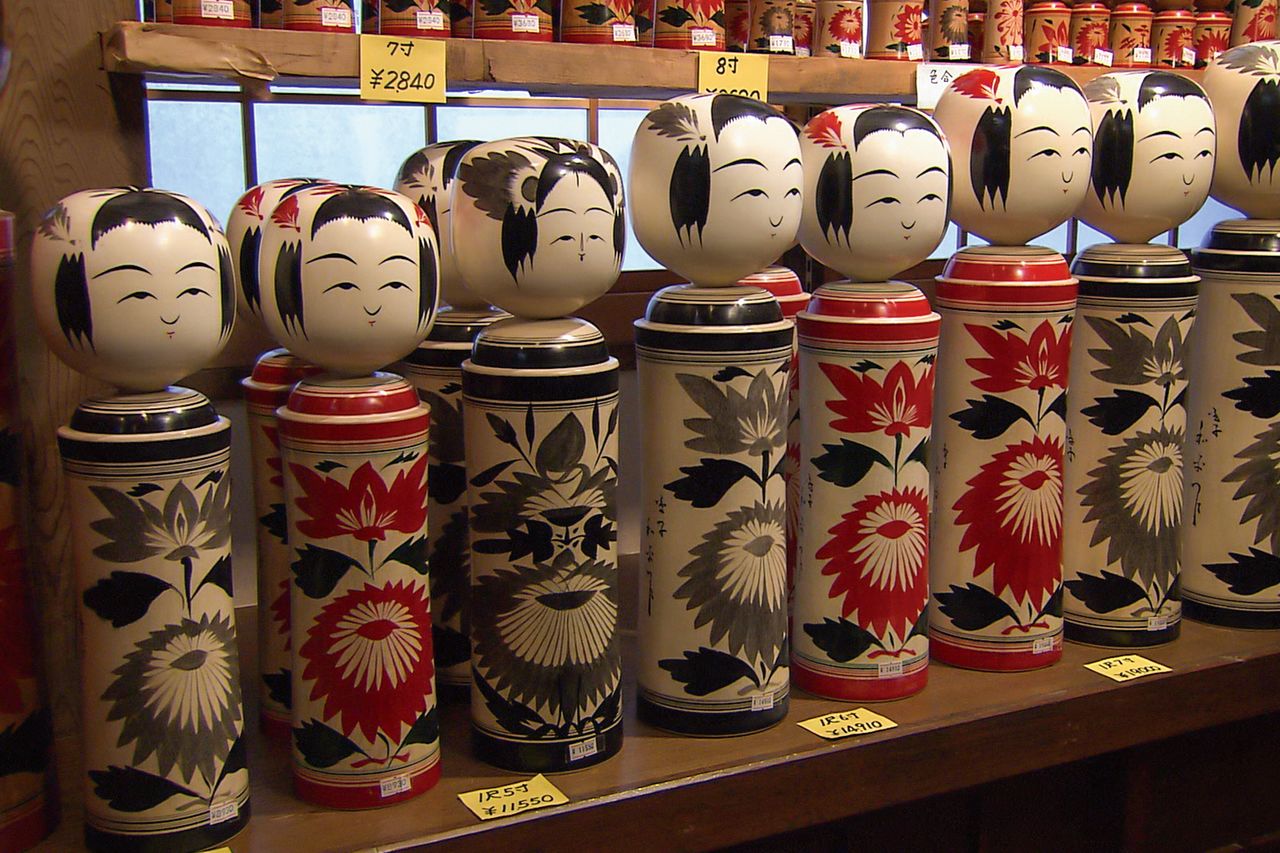 Seen from the front, Naruko Onsen kokeshi display a line of chrysanthemums, while their heads are crowned with lozenge-shaped chrysanthemum crests. (Photo courtesy of the Miyagi Prefectural Tourism Department)

Kokeshi are made all over Tōhoku, but the three main production centers are Naruko and Tōgatta, in Miyagi Prefecture, and Tsuchiyu in Fukushima Prefecture. Kokeshi are grouped into 10 to 12 varieties, each with distinctive features—shape, decoration, or production technique—handed down in each region.

Tsugaru-style kokeshi are made mainly in Nuruyu Onsen and Ōwani Onsen, in the Tsugaru district of Aomori Prefecture. The head and trunk are carved from a single piece of wood. Many of these kokeshi feature bobbed hair, a cinched waist, and a flared foot similar to a skirt. Painted designs are often daruma, a representation of Bodhidharma, or peonies, the flower on the family crest of the Tsugaru clan.

This style of kokeshi has a loosely attached head that makes a knocking sound when the doll is moved. The wood on these kokeshi was originally left plain to heighten appreciation of the grain, but painted designs were adopted later, influenced by the Naruko and Tōgatta styles. Produced mainly in the cities of Hanamaki and Morioka in Iwate Prefecture.

Made from a single piece of wood, this kokeshi has a small, somewhat elongated head with a bobbed hairstyle often topped by a red, ribbonlike decoration. The Kijiyama-style kawatsura variety’s distinctive feature is the striped kimono design on the trunk, although some carry a chrysanthemum or plum blossom design. 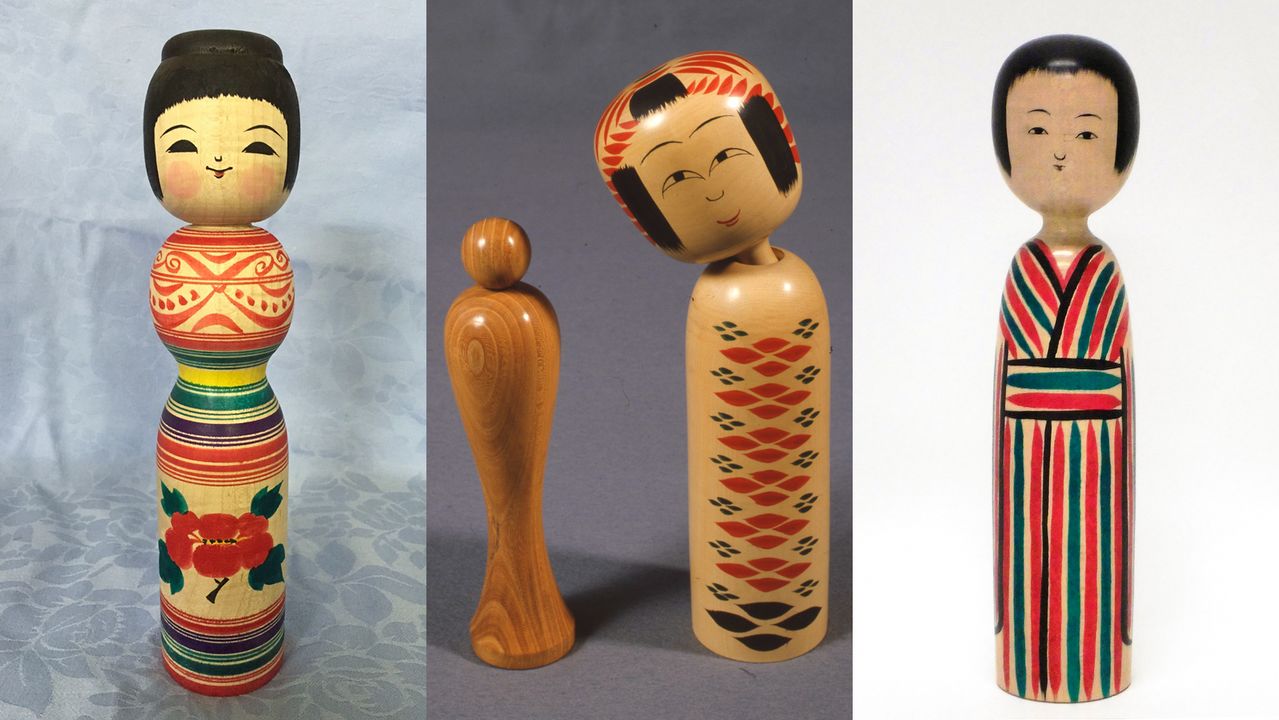 In this style of kokeshi, the head is attached by a peg fitted into the body and makes a squeaking sound when turned. The slightly cinched trunk is decorated with colorful chrysanthemum or momiji maple designs that enhance the doll’s endearing facial expression.

This slim variety echoes the item’s original function as an easy-to-grasp children’s toy. The shoulders and foot are turned on a potter’s wheel and the center of the trunk is often decorated with a motif of chrysanthemum with long, thin petals. The only remaining producer of this style in modern-day Sakunami is the Hiraga Kokeshi Shop.

In this style of kokeshi, the head is proportionally larger than the body, and the top of the head is crowned with a red radiating pattern. This showy variety is gaily decorated with either chrysanthemum, plum blossom, or cherry blossom designs. Crescent-moon or almond-shaped eyes give this doll a gently smiling expression. 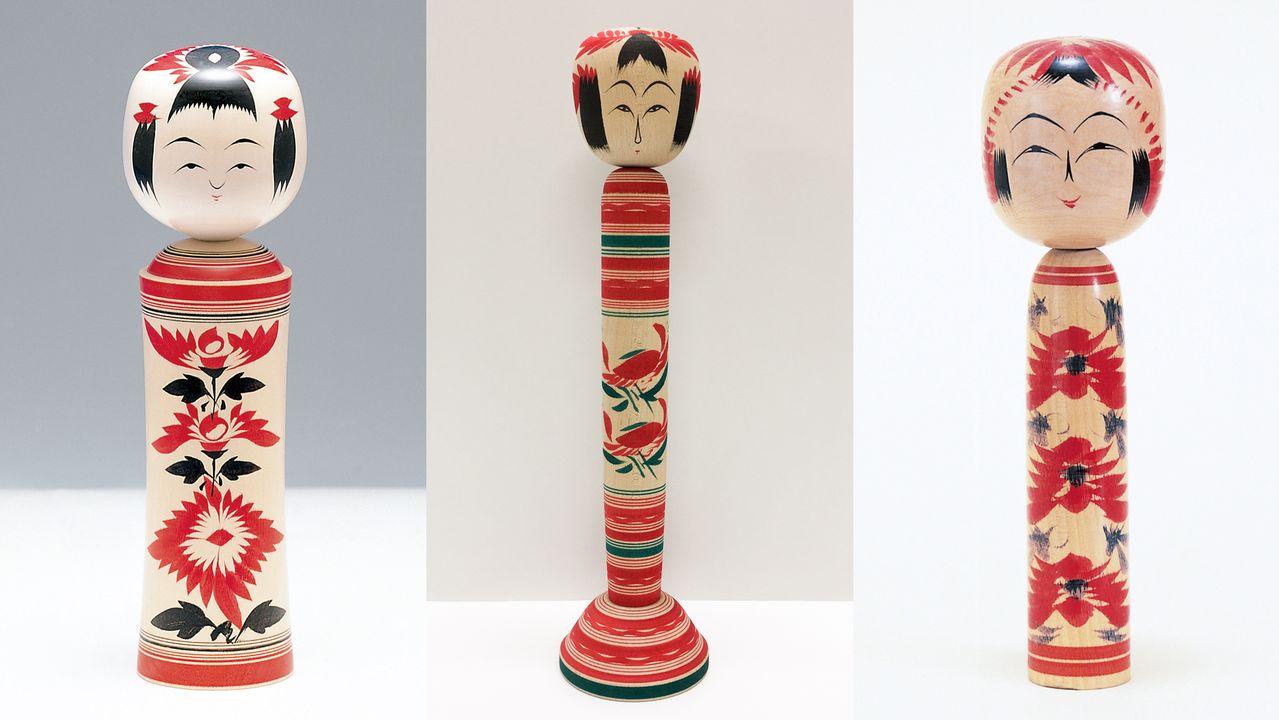 In this style of kokeshi, the head is slightly larger than the trunk and carving tracks overlap on the head, giving it a beretlike appearance. This variety has a slightly concave trunk and the lines depicting the neckline and bottom edge of the bright kimono design are a distinctive feature.

While they echo the Naruko and Tōgatta styles, Hijiori-style dolls have a distinctive flavor, their crescent moon-shaped eyes projecting a benign expression. The trunk painted yellow, with squared-off shoulders, is usually decorated with chrysanthemum motifs. Some larger dolls of this type have heads filled with adzuki beans that create a rattling sound.

Reputedly created by artisans who had trained in Sakunami, this style of kokeshi is unusual in that the dolls are made in the heart of the city of Yamagata rather than in a hot spring town. With a small head and a slim trunk, they are decorated with plum, cherry blossom, or chrysanthemum motifs and also occasionally with the safflower, the official flower of Yamagata Prefecture. 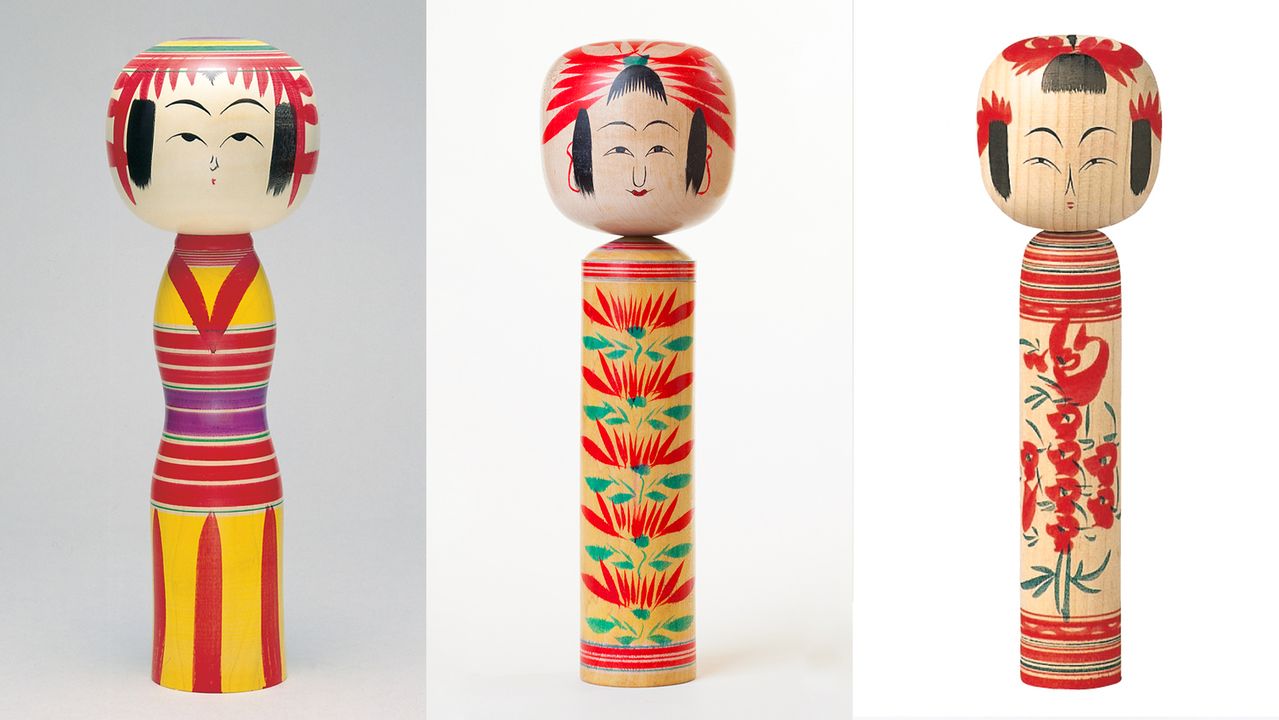 Developed under the influence of the Tōgatta style, this kokeshi is produced in the Yamagata Prefecture cities of Yamagata, Yonezawa, and Tendō in addition to its birthplace of Zaō Onsen. The thick, heavy trunk is slightly cinched toward the bottom and decorated with designs either of overlapping chrysanthemums or cherry blossoms or peonies. A tegara hair ornament represented by red radiating lines adorns the top of the head.

This style has a small head and slim trunk. A bull’s-eye design is carved into the top of the head on a wheel lathe, and the forehead features a red kase hair ornament over the fringe. Tsuchiyu-style kokeshi, with elongated noses and tiny red mouths, make a very charming impression. The thin lines on the trunk are brightly painted, and wavy lines, added for variety, are a distinctive feature of this style.

This style of kokeshi is produced in Nakanosawa Onsen, in the foothills of Mount Bandai. It is eye-catching for its large red-rimmed eyes and broad nose, and the trunk is decorated with peonies or cherry blossoms. Despite its nickname Tako-bōzu, where bōzu means “boy,” this doll is basically female. Unusually for kokeshi dolls, though, there is also Ao-bōzu (“Blue Kid”), a version modeled on a boy. 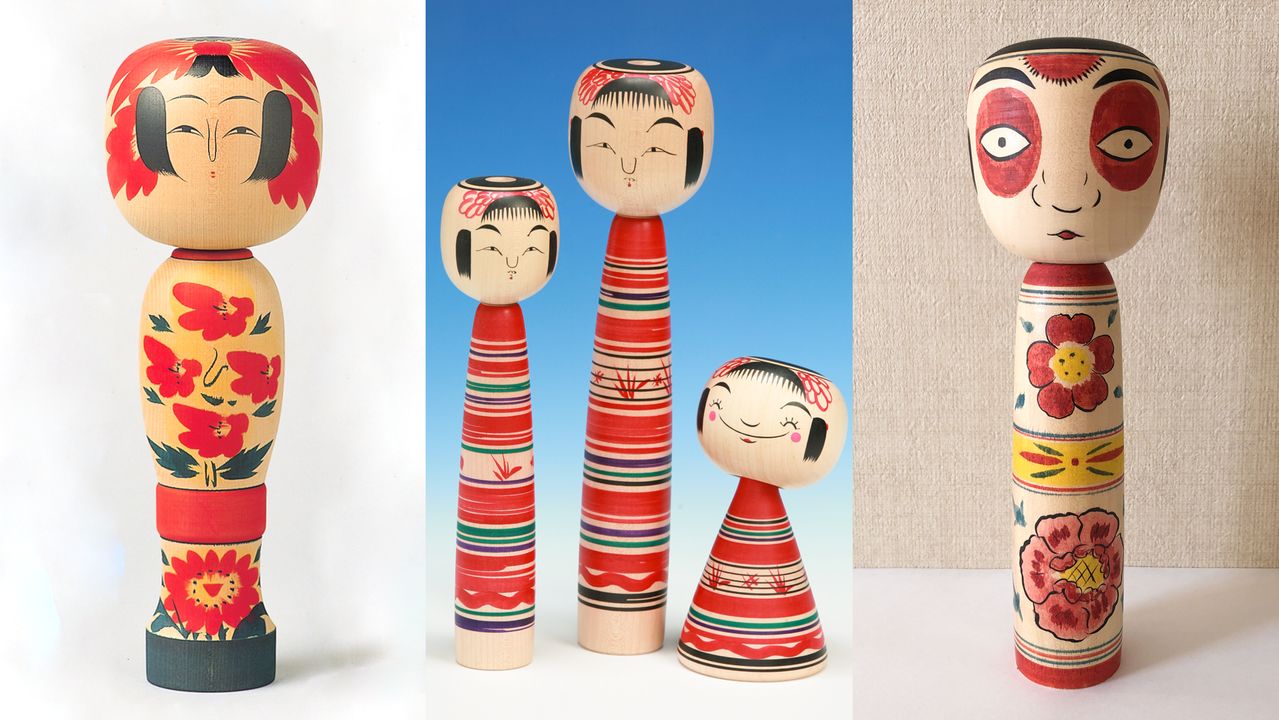 (Reporting, text, and photos by Shoepress. Banner photo: Yamagata-style kokeshi at the Nishida Memorial Museum in the city of Fukushima. Photo courtesy of Fukushima Prefecture Tourism and Reconstruction Promotion Committee.)