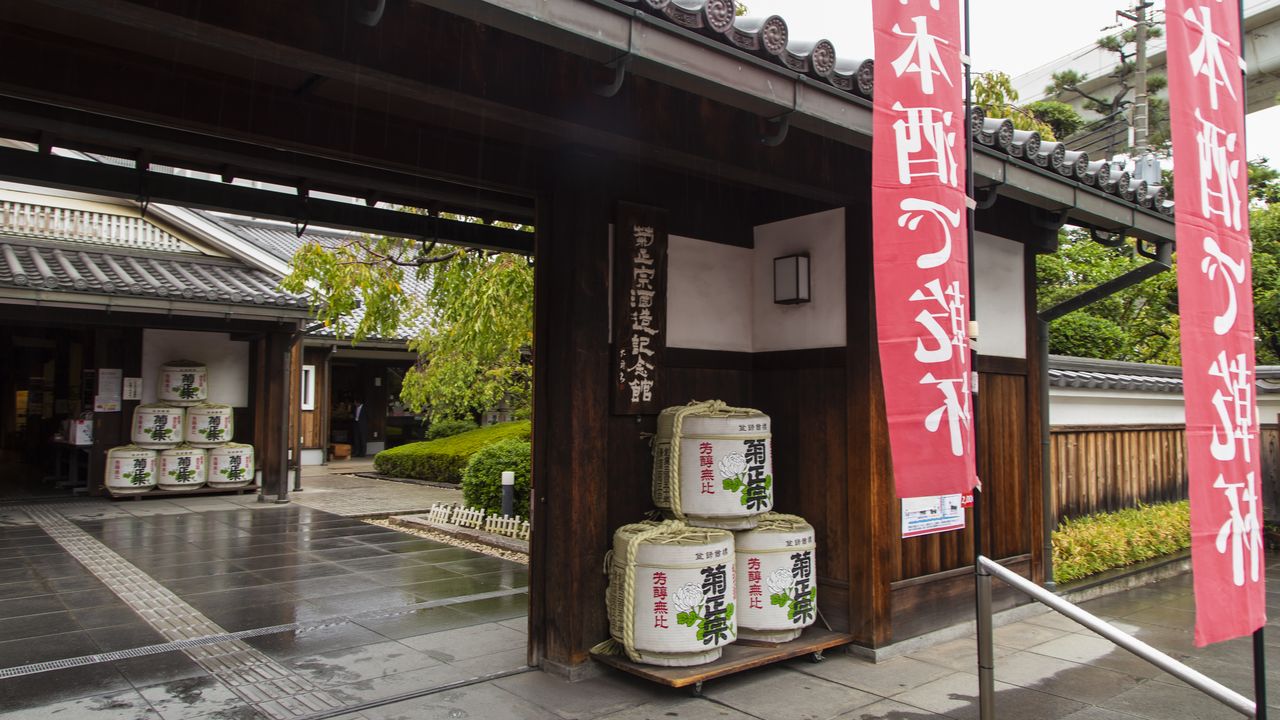 Exploring the Sake Breweries of Nada

Travel Food and Drink May 15, 2020
The five sake-producing areas of Hyōgo Prefecture—known collectively as the Nada gogō—rank first for volume of sake production. These breweries, which grew rapidly in the Edo period (1603–1868), continue to prosper today. We introduce you to their history and to the natural features of the area conducive to good sake-making.

Hyōgo Prefecture ranks first in Japan for both production and sales volume of sake. The leading production area in the prefecture is a stretch referred to as the Nada gogō, running along the shoreline from Nada-ku, in the eastern part of Kobe, to near Kōshien baseball stadium in Nishinomiya.

Kiku Masamune Sake Brewery Museum director Gotō Mamoru explains: “While sake-making began earlier in places like Nara, Fushimi, and Itami, Nada was a relative latecomer, first flourishing in the Edo period.” The Kikumasamune brewery, founded in 1659, is an old, established name in Nada, known for producing crisp, dry sake that goes well with food. In the early days of the Edo period, the Kanō founding family were lumber dealers who began making sake in winter for their own use and for entertaining business clients. 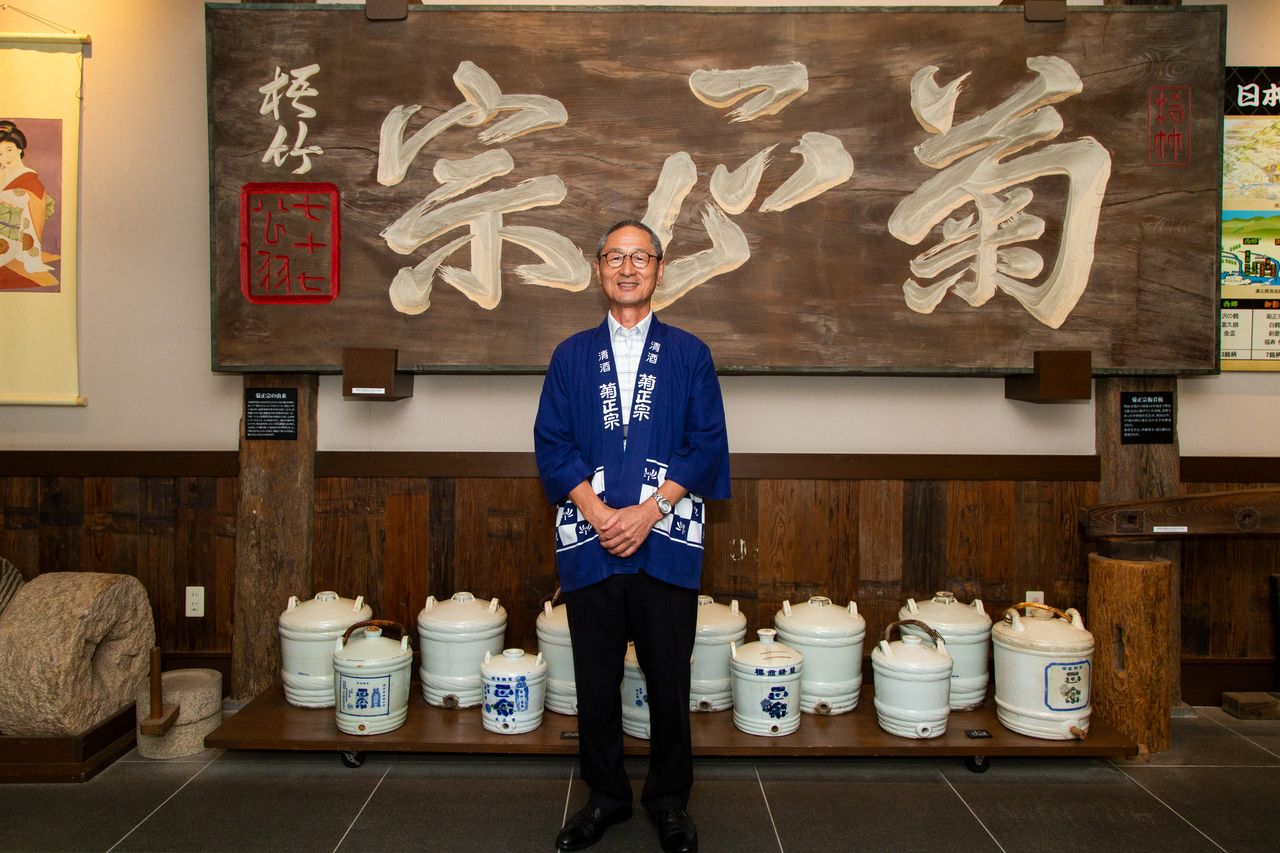 Gotō Mamoru relates the history of sake in Nada. 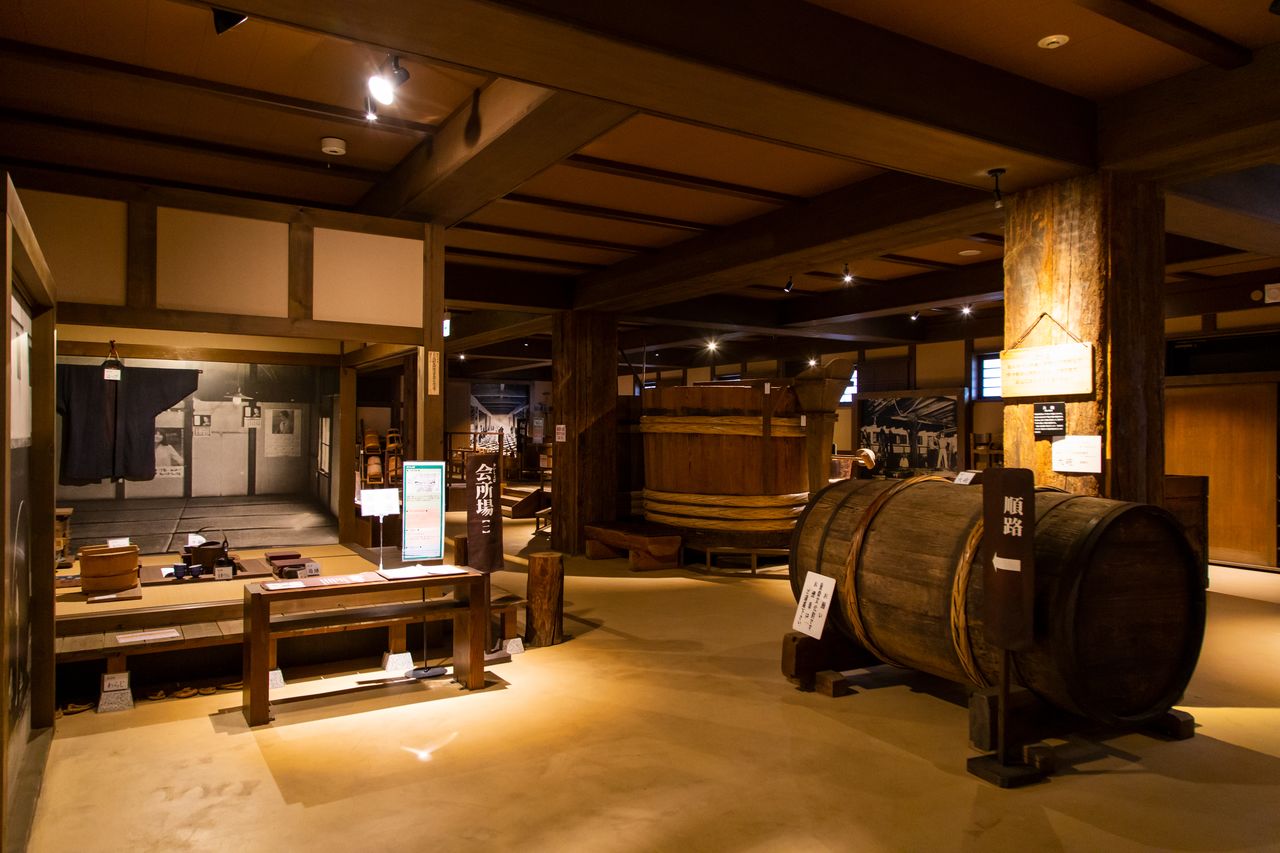 The Kiku Masamune Sake Brewery Museum introduces visitors to traditional sake-brewing methods and the history and appeal of Nada sake. Among the exhibits are Nada sake-making equipment, designated important folk cultural properties by the government, and other valuable artifacts.

According to Gotō, “In the seventeenth century, the population of Edo—today’s Tokyo—grew at a rapid pace, and demand for sake shot up too. The sake-producing areas best-known until then, such as Fushimi, Itami, and Ikeda, were all inland, and it took money and manpower to get their sake to coastal ports, where it would be shipped north to Edo. The lumber dealer Kanō Jirōemon saw a business opportunity there and decided to start brewing sake on the coast at Nada.”

Sake brewing in the Nada gogō took off in earnest in the years between 1624 and 1644, when an Itami brewer, seeing the advantages of a coastal location for shipping by sea, moved his operations to Nishinomiya. Other inland brewers followed suit, moving to Nada. Some enterprising types got into the business from scratch: among them was the founder of the Kiku Masamune brewery.

In the Genroku era (1688–1704), when urban culture flourished, sake consumption in Edo grew by leaps and bounds and ships laden with barrels of sake sailed north from Kamigata (the Kansai area) to Edo. Sake from Kamigata was viewed as more sophisticated than the rough-hewn version produced in Kantō, the area around Edo, and was the preferred drink. Sake from Nada was particularly prized, and by the late Edo period it is estimated that around 80% of the sake consumed in Edo was from Nada.

The Kanō family, which dealt in lumber, had a coastal shipping business, and barrel-making was right up their alley too. They shipped large quantities of their popular sake to Edo. As Nada prospered from sake brewing, the Kanō family subdivided, the main family being referred to as the Hon Kanō and the branch family the Haku Kanō. The latter family founded the Hakutsuru Sake Brewing Company, which today boasts the largest sake sales in Japan, in 1743. The founder of judō, Kanō Jigorō (1860–1938), was a scion of the prosperous Hamahigashi Kanō branch of the family, whose business was coastal shipping. 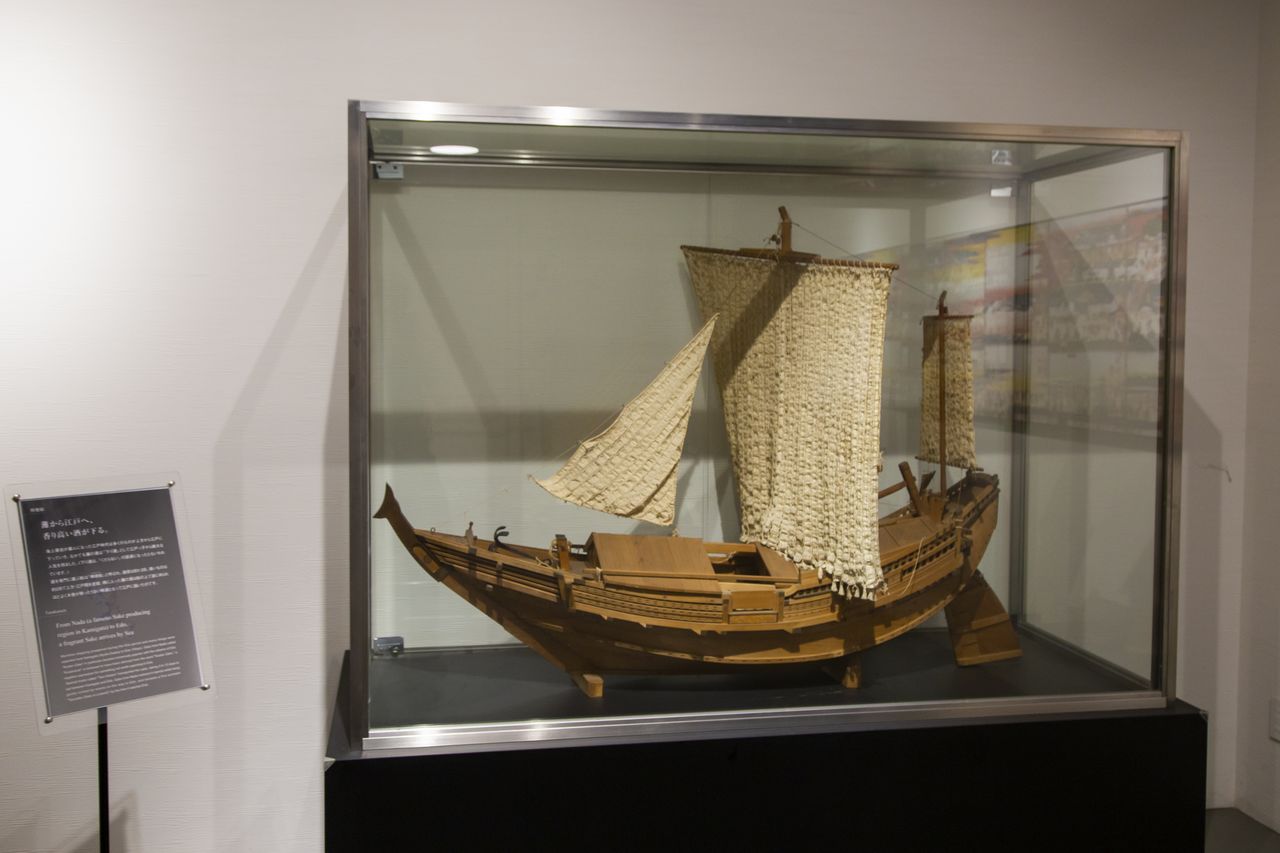 A reproduction of a coastal shipping vessel that carried sake to Edo.

The rapid growth of Nada’s sake breweries and their continued prosperity can be ascribed to a number of important factors. One was proximity to the coast, which made it possible to ship large volumes of sake to Edo and other parts of the country. Another was winter winds, famously known as “Rokkō oroshi,” which blew down from the nearby mountains and helped cool the steamed rice. The third factor was rice, which could be sourced from elsewhere and offloaded at the ports near Nada, and the birth of Yamadanishiki, a strain of rice eminently suited to sake-making, in the Taishō era (1912–26). Fourth was the availability of mineral-rich water from the Rokkō mountains, which was fine for brewing sake.

The brewery buildings were oriented so that wind could enter from the north, to take advantage of the Rokkō oroshi winter winds blowing in from the mountains to the sea. That helped cool the steamed rice quickly and allowed more sake to be produced. 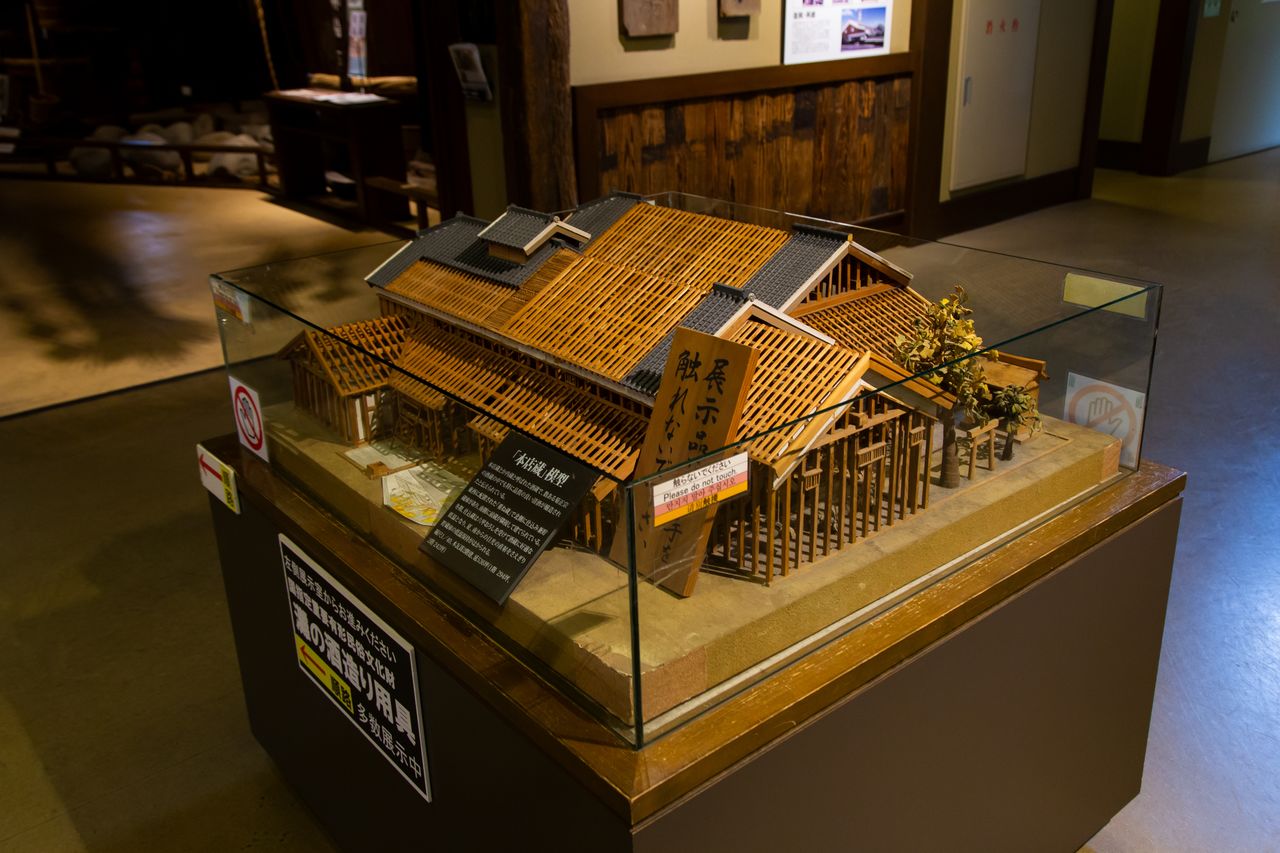 A model of the Kiku Masamune brewery building, oriented to let in the Rokkō oroshi blowing in from the north.

Being close to ports to procure large amounts of rice was another advantage for the sake makers. Mills powered by waters rushing in the rivers from the Rokkō mountains were able to polish more rice, which in turn helped the brewers produce much larger quantities of sake. In the 1910s, Yamadabo, a strain of rice suited to sake brewing, began to be grown in quantity in Hyōgo Prefecture. An improved strain, Yamadanishiki, debuted in 1923. Yamadanishiki continues to be the leading brand of rice for sake brewing, and 80% of it is cultivated in Hyōgo Prefecture.

Nada is counted among the nation’s top three locations for tōji, master sake brewers, the other two being Nanbu (Iwate Prefecture) and Echigo (Niigata Prefecture). Nada brewing methods made full use of the mineral-rich hard water coursing down from the Rokkō mountains. And in 1840, miyamizu, the best water for sake brewing, was discovered. 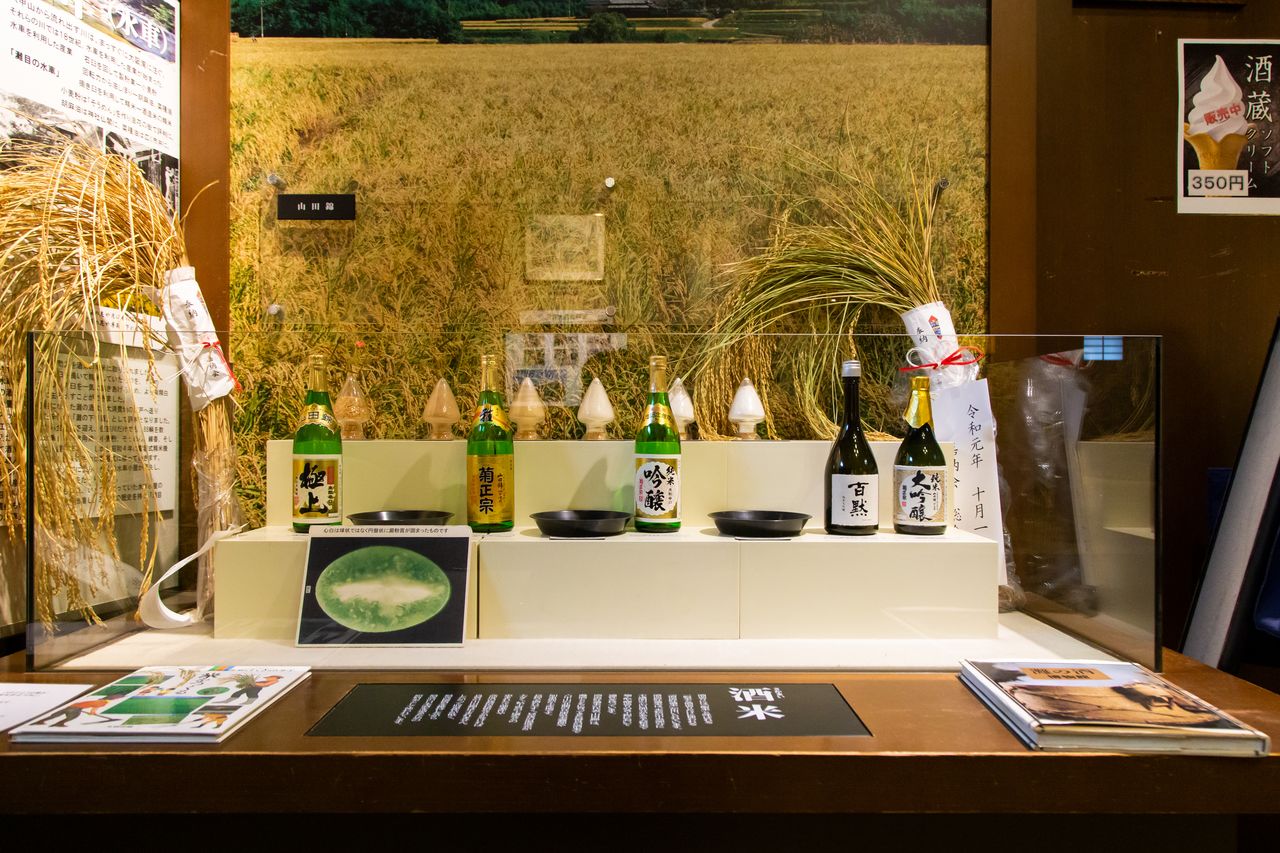 An exhibit on rice for sake brewing. The Kiku Masamune Brewery contracted with rice growers in Miki, Hyōgo Prefecture in the late nineteenth century to grow the rice for its sake. The area is now famous for growing Yamadanishiki. 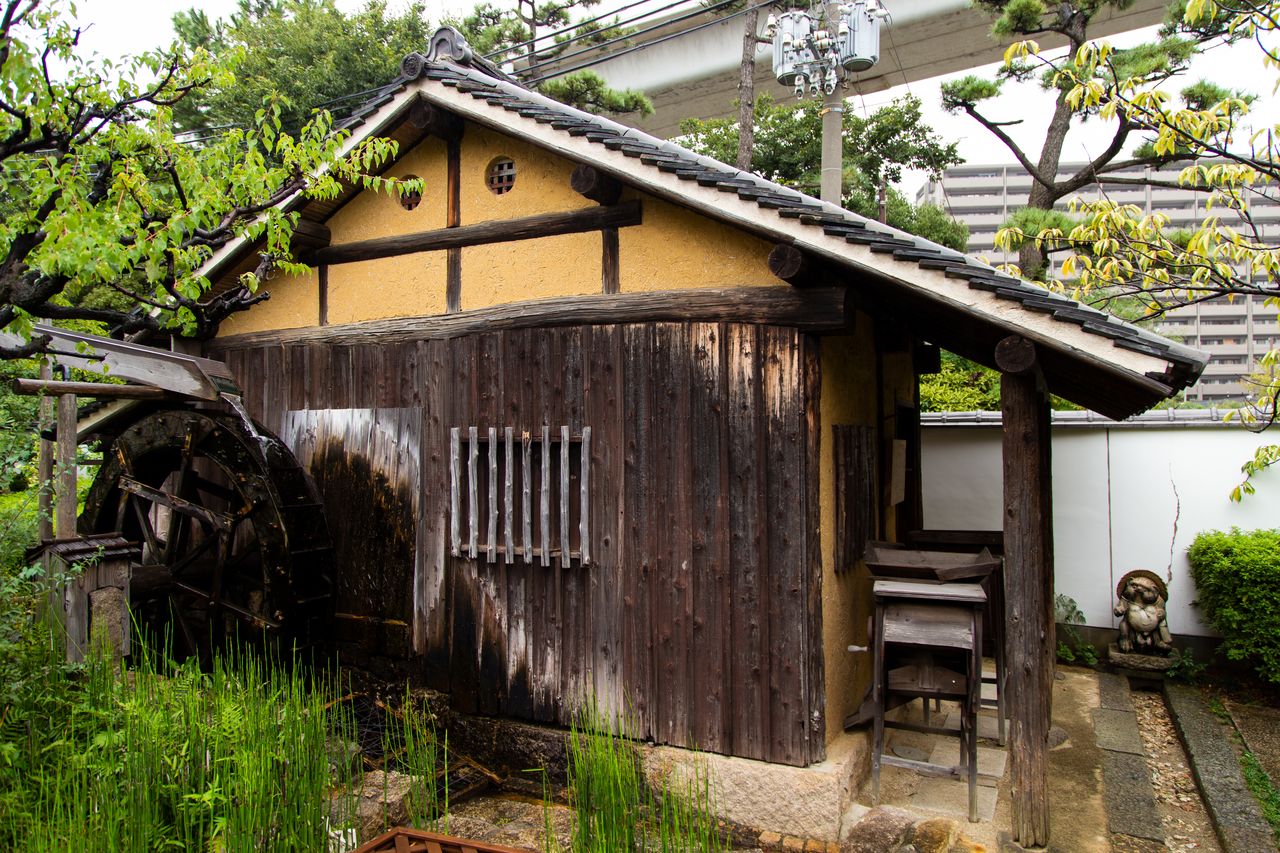 A reproduction of a mill equipped with a water wheel, which greatly increased the amount of rice that could be hulled. Visitors can have a look inside.

The Water Is the Key

Miyamizu firmly established the reputation of Nada sake, and there is an interesting story about how it was discovered.

Sakura Masamune, founded in 1717 in Nada, had two breweries, at Uozakigō and Nishinomiyagō. Both breweries used exactly the same ingredients and brewing method, but for some reason, every year the sake from the Nishinomiya brewery was always better tasting. Yamamura Tazaemon, the sixth-generation head of the brewing family, tried changing his head brewer and brewery workers but always got the same result. After much trial and error, Tazaemon decided to use the same water at both of his breweries. 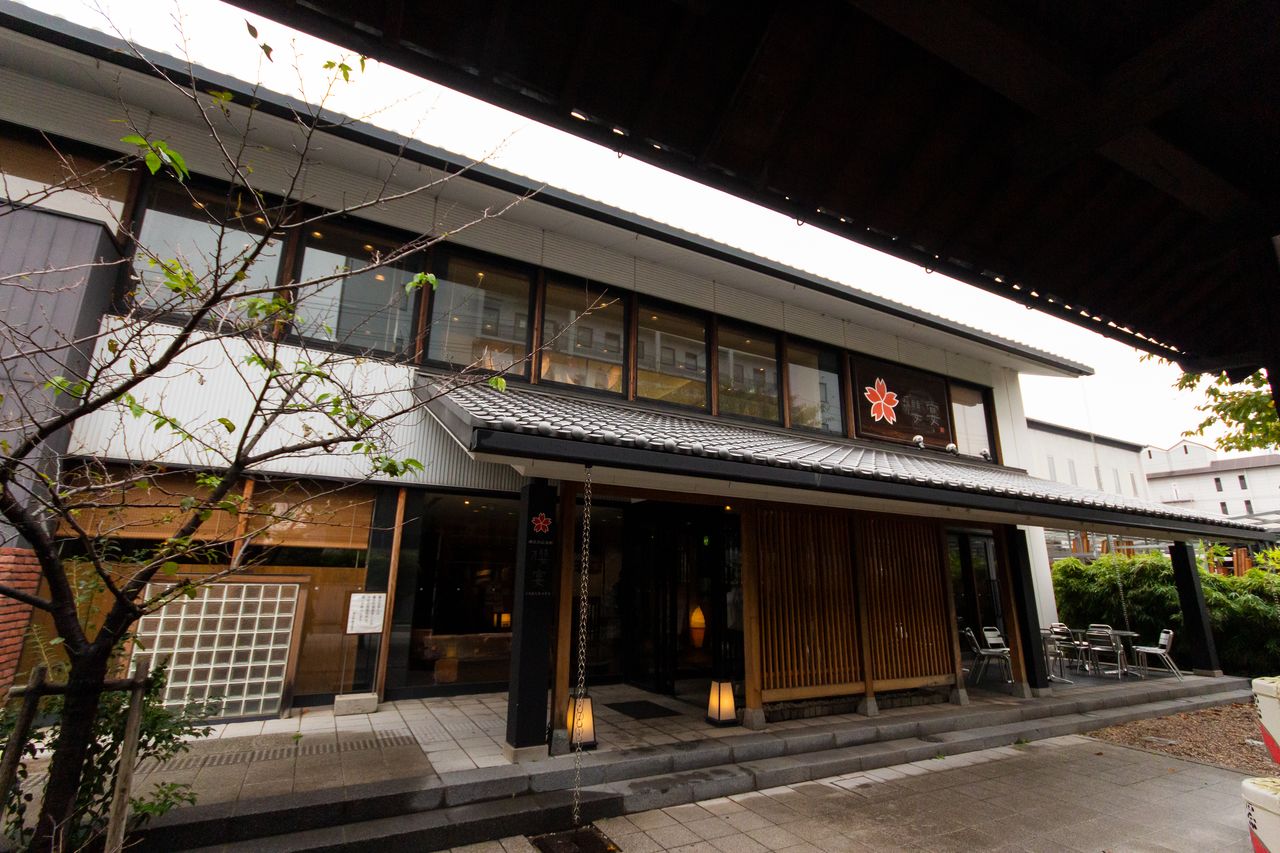 Sakura-en, the Sakura Masamune Memorial Hall in Uozakigō. The hall is decorated with traditional sake brewing equipment and old signboards and sake bottles. The Kuramachi-dōri exhibition space describes the history of Sakura Masamune, and a restaurant and café on the premises offer visitors an opportunity to sample sake. 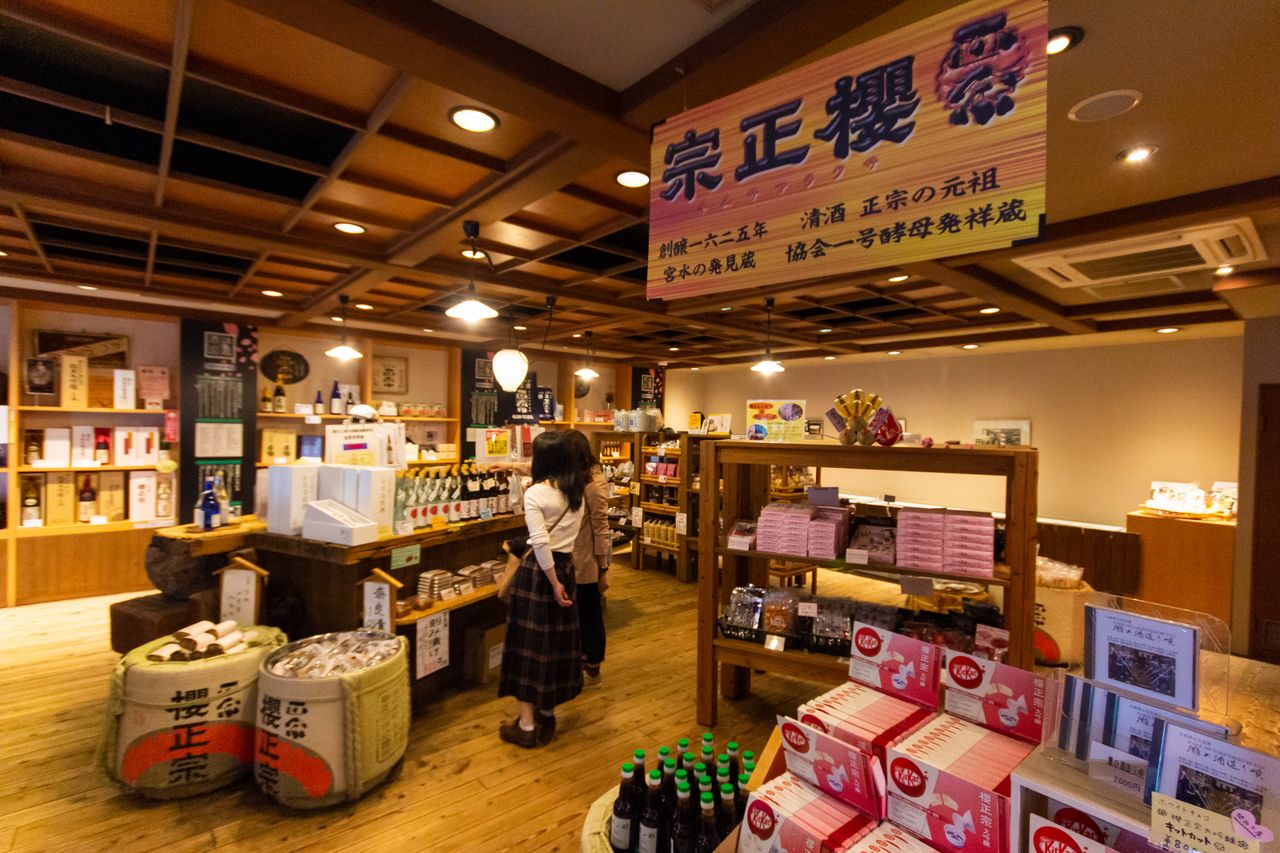 The Sakura-kura gift shop sells sake and locally produced tidbits perfect for enjoying with the drink. The signboard aboard informs visitors that this is the brewery where miyamizu was discovered.

In the old days, most sake was made in winter and lost its taste after summer. This was because of iron in the water, which caused sake to discolor and the taste to fade away. As it turned out, miyamizu, although rich in minerals, contained very little iron. Sake made with this water kept its taste past summer and as a matter of fact got even better-tasting in the fall. This aki bare, or “fine autumn,” phenomenon made the sake even more popular.

Brewers in the Nada gogō all set about digging wells to avail themselves of this miyamizu, and today wells dug by well-known brewers are concentrated in a 500-meter-square area of Nishinomiya. 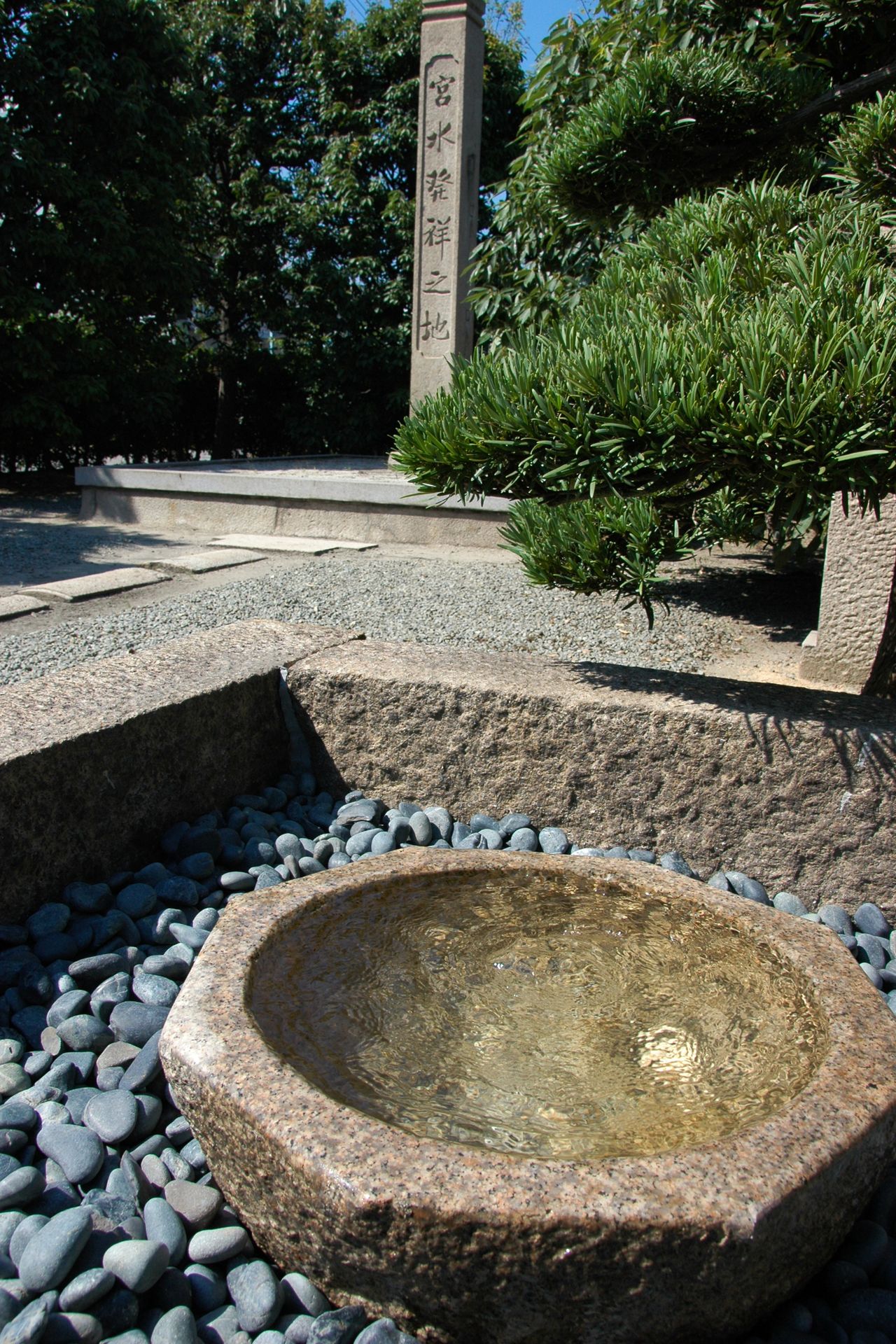 A stone monument in Nishinomiya marking the spot where miyamizu was first discovered.

In the latter decades of the nineteenth century, Nada brewers adopted steam engines to power their operations, allowing them to move into mass production. Nada was also the first to adopt selling sake in the now-ubiquitous glass bottles. Although the popularity of Nada sake dimmed after the Edo period, Nada sake brewers have continued to prosper by innovating production and management methods. 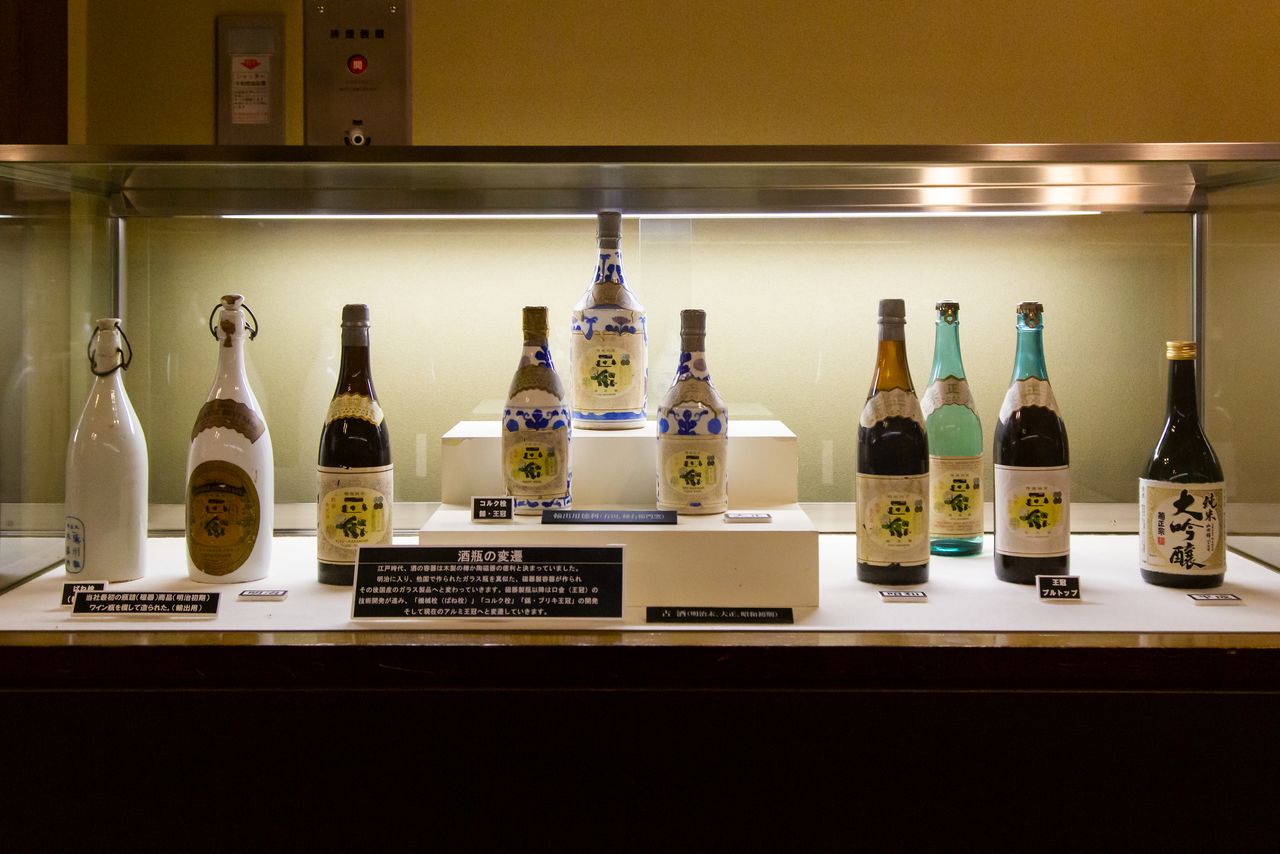 This display traces the changes in sake packaging, from porcelain containers modeled after Western-style glass bottles to domestically produced glass bottles. The improvements to the clasp over the years hint at the difficulties encountered in developing the right packaging.

In the words of museum director Gotō, “Brands today like Kiku Masamune, Hakutsuru, and others have the image of being cheap sake for everyone, but I believe that Nada brewers are still going strong because they try new things while still prizing the old methods and traditions. Apart of our line of less expensive sake, we continue brewing according to kimoto process, rather than adding lactic acid to accelerate brewing. Brewing using kimoto is slow and labor-intensive, but I think it’s thanks to this foundation that we can produce good-tasting, affordable sake.”

Popular Nada sake brands today like Kikumasa-pin, a product for home use in a paper pack decorated with pink chrysanthemums, Maru from Hakutsuru, One-Cup Ōzeki, and others, which combine good taste with affordability, have been steady sellers for decades. Although Nada has done well in business as a famous sake-producing area and upholds tradition, it is open to doing new things as well. Nada has benefitted from its location and natural surroundings, it is true, but its continued prosperity is also due to the entrepreneurial spirit and acumen of the Kanō and Yamamura families, who made the most of the opportunities that presented themselves. 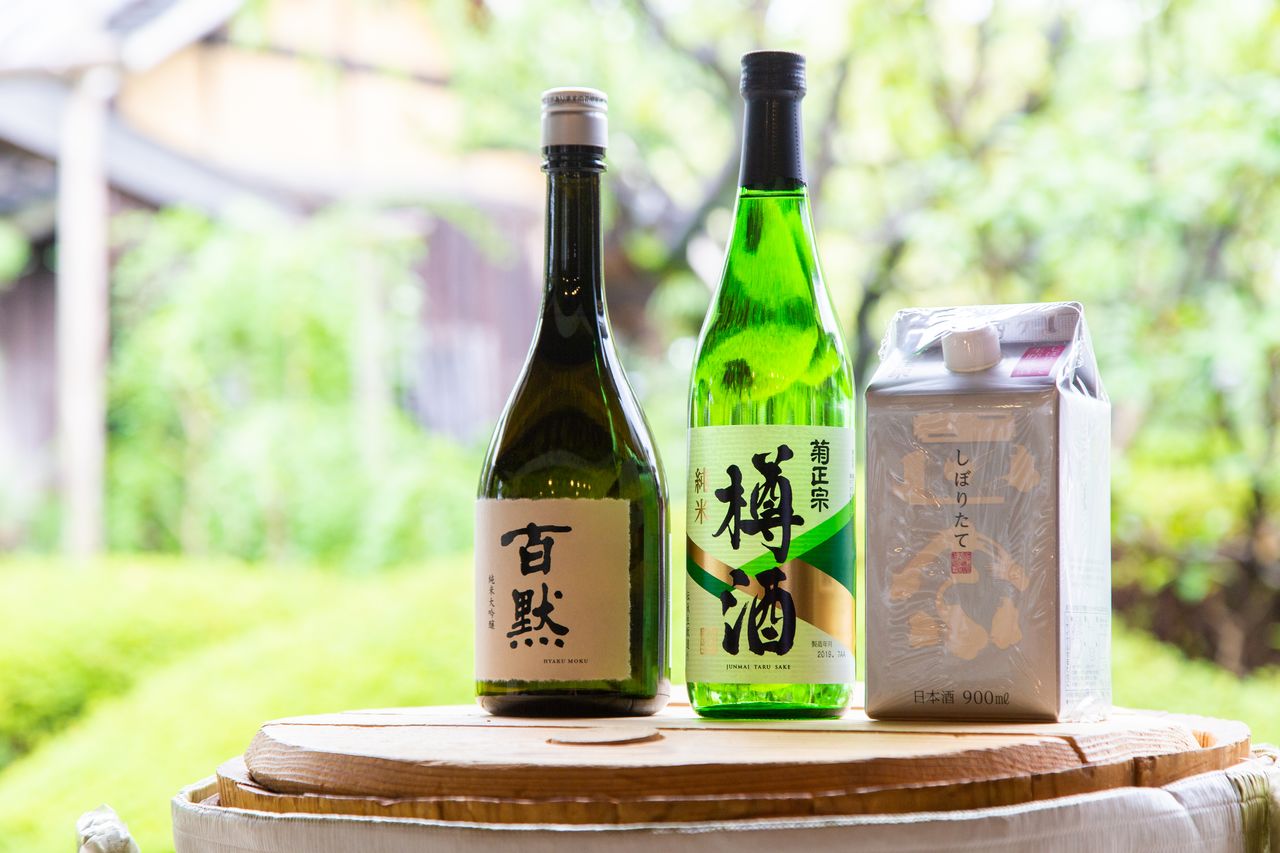 Kiku Masamune’s brews combine tradition and innovation. From left, Hyakumoku, made from 100% Yamadanishiki rice from the best paddies; Taru Sake, offering the traditional flavor of sake shipped in barrels to Edo in the old days; and Shiboritate Ginpakku, which although packaged in paper, has the flowery bouquet of freshly brewed sake.

The name Nada reminds many Japanese people of Nada High School, one of the nation’s most elite high schools. This school was founded in 1927 with donations from the Kanō, Hon Kanō, Haku Kanō, and Yamamura families at the initiative of Kanō Jigorō, then the president of the Tokyo Higher Normal School (today the University of Tsukuba). He became an advisor to the school, setting its education policy and hiring teaching staff. The Nada gogō spirit of developing valuable human resources lives on here as well. 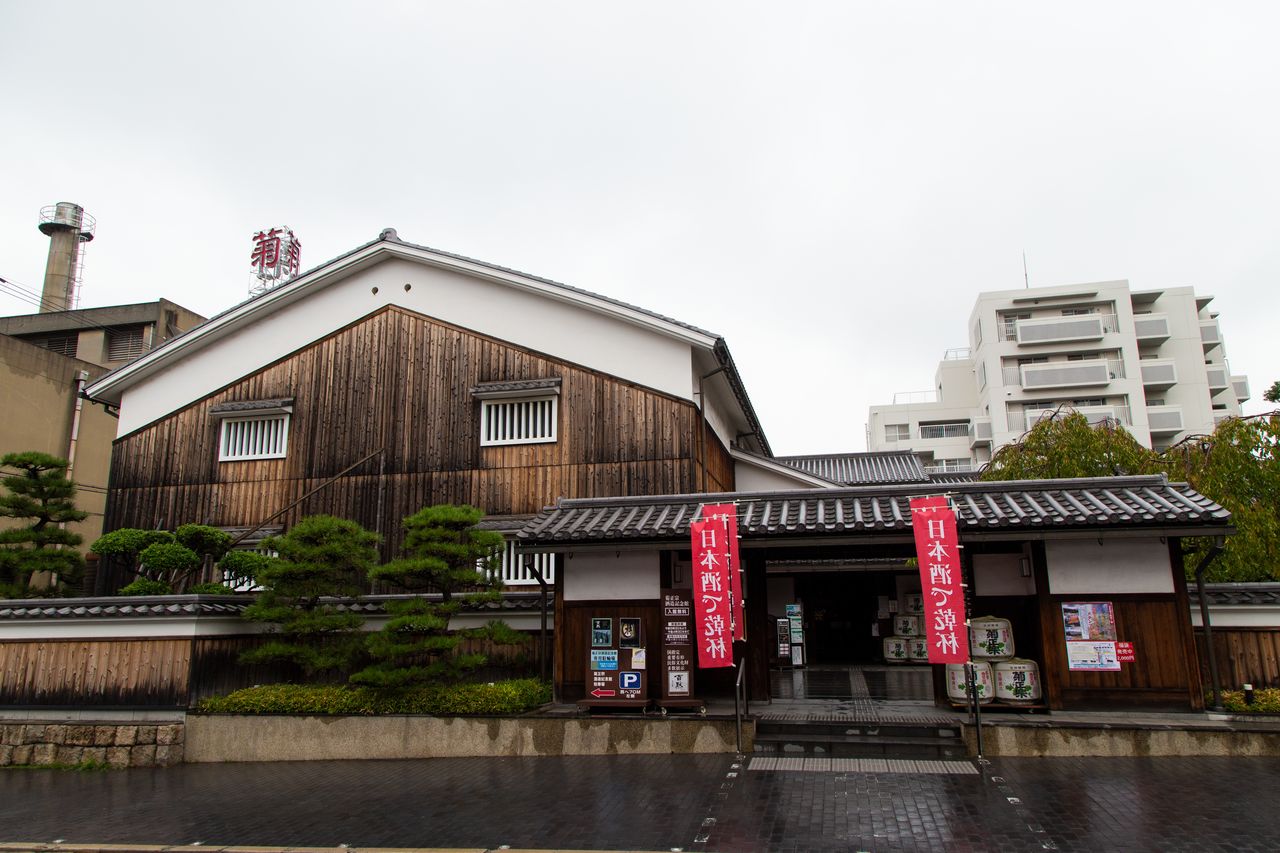