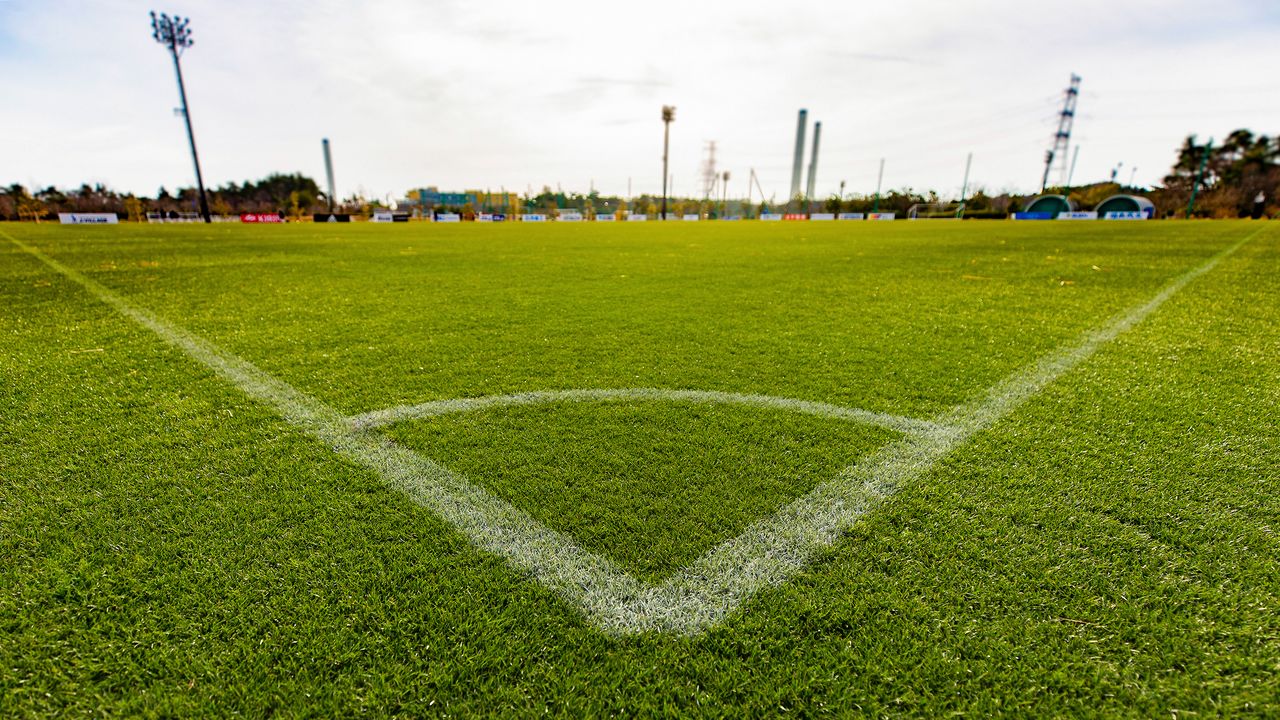 J Village: Once Again a Place for Soccer Fans

Travel Sports Tokyo 2020 Mar 11, 2020
The torch relay for the 2020 Tokyo Olympics will kick off in Fukushima’s J Village on March 26. The soccer facility served as a base for cleanup efforts after the Fukushima Daiichi nuclear disaster, but is once again fostering the next generation of Japanese footballers.

The 2020 Olympics and Paralympics in Tokyo have been a driving force in rebuilding efforts in communities devastated by the 2011 Great East Japan Earthquake. The Games are being billed as a “recovery Olympics” that will show the world just how well disaster-affected areas of Japan are bouncing back. One symbol of this recovery is the J-Village, the national soccer training center in Fukushima Prefecture that has been chosen as the starting point for the Olympic torch relay. 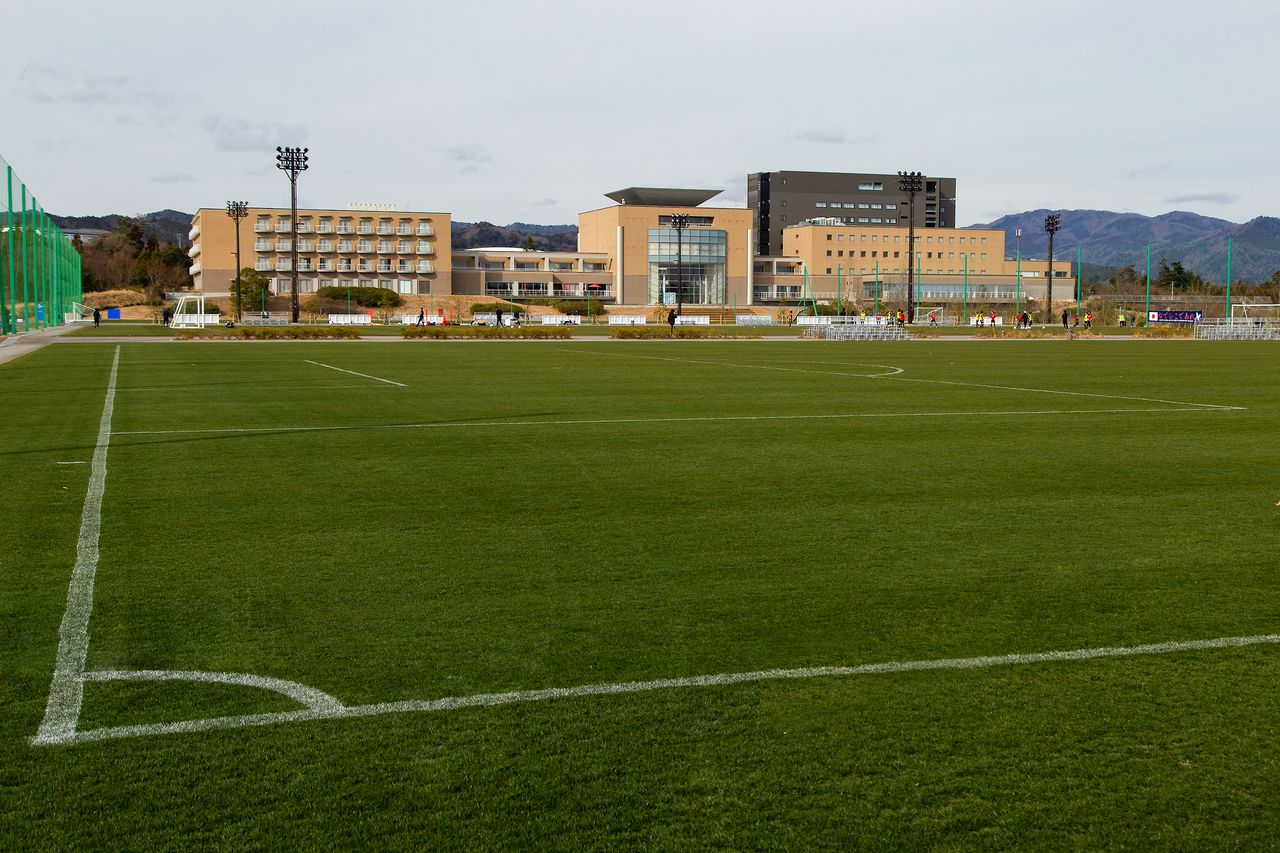 One of several natural grass pitches at the J-Village. 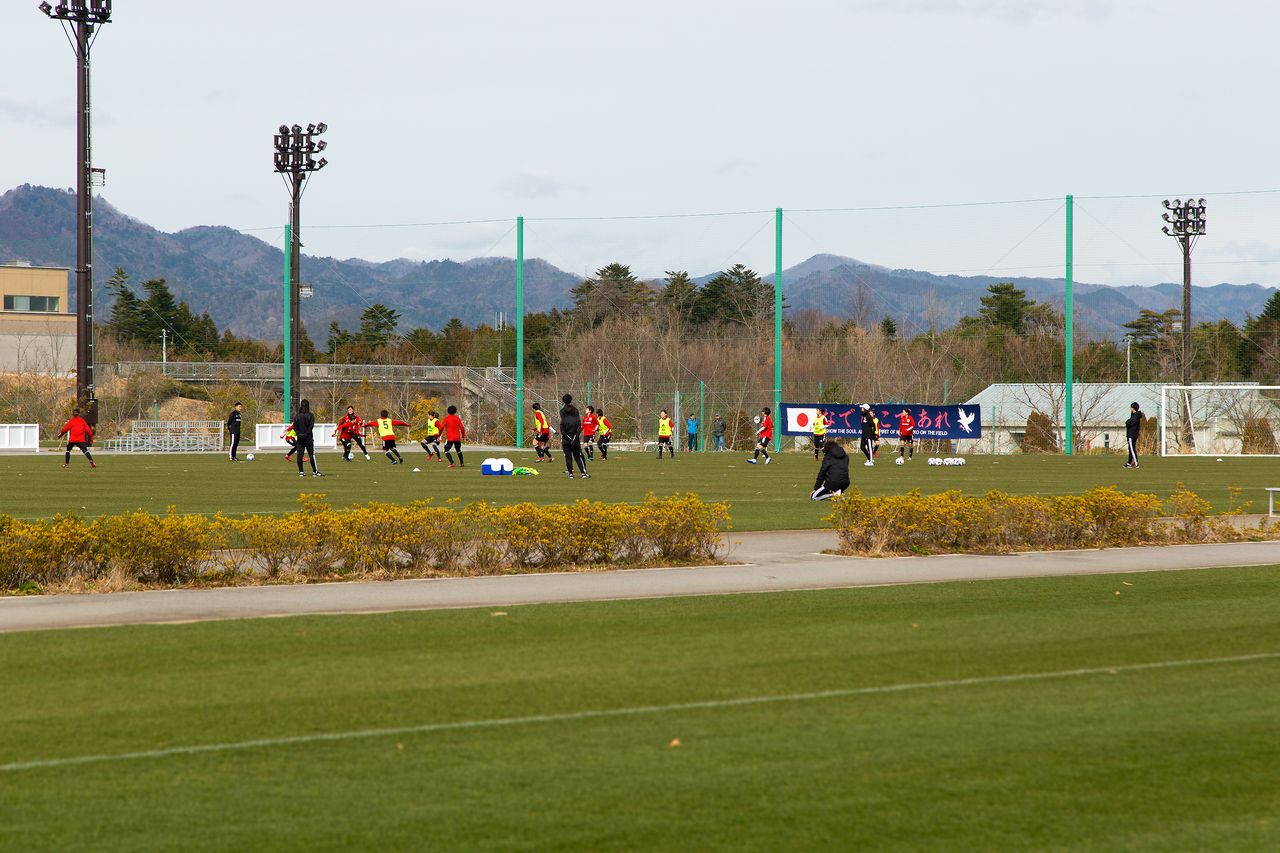 The women’s national soccer team, Nadeshiko Japan, during a recent practice session at the facility.

Previously, the J-Village served as the training ground for the Japanese national soccer teams. But following the triple meltdown at the Fukushima Daiichi Nuclear Power Plant, it became part of the frontline efforts to bring the disaster under control. After this role ended, the pitch was relaid, the facilities refurbished, and the revamped J-Village was reopened in April 2019.

The Olympic flame will depart the J-Village at 10:00 am on March 26 and spend the next three days traveling across Fukushima, visiting areas affected by the earthquake and nuclear disaster. The torch will then tour other regions of Japan before arriving at the National Stadium in Tokyo on July 24 to light the Olympic cauldron. 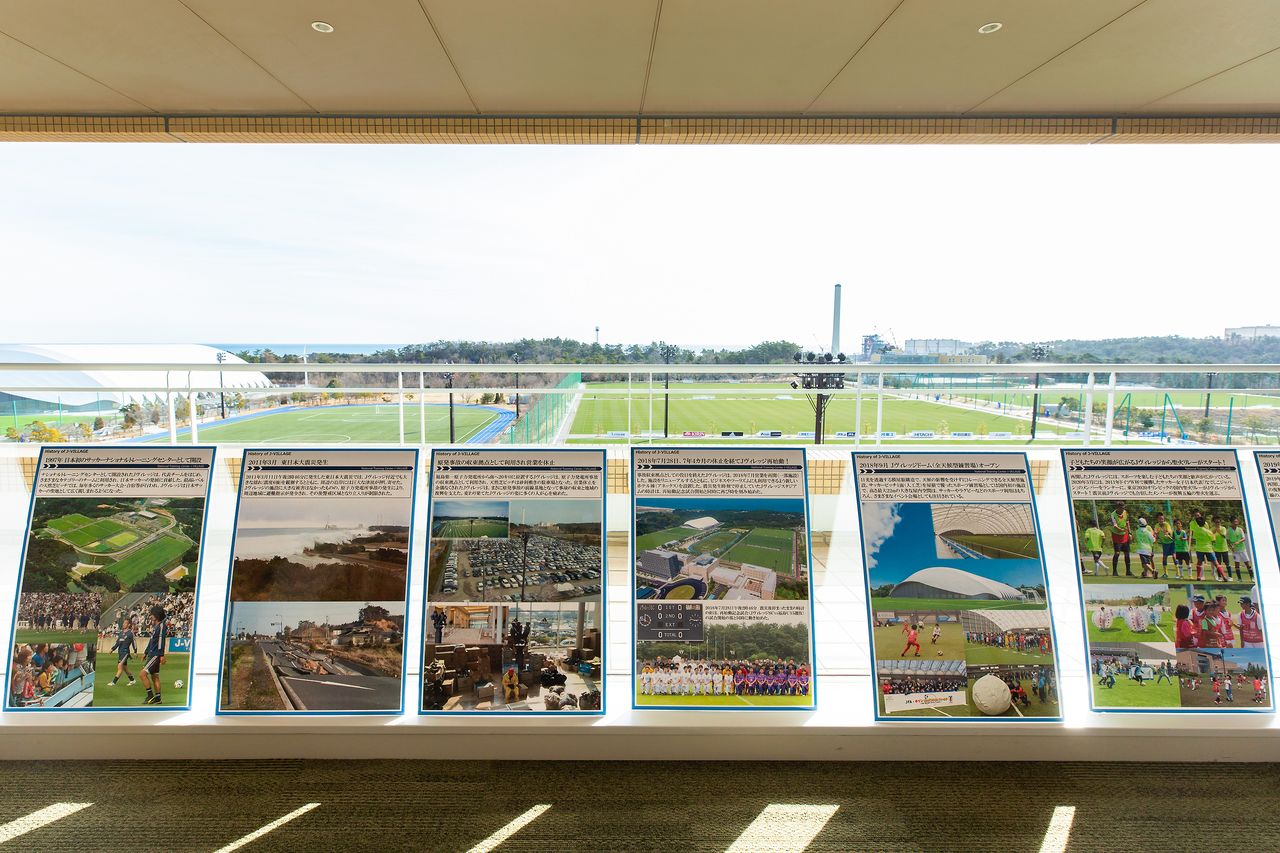 Panels on the facility’s observation deck depict the original opening, the earthquake and tsunami, and the progress of reconstruction efforts. 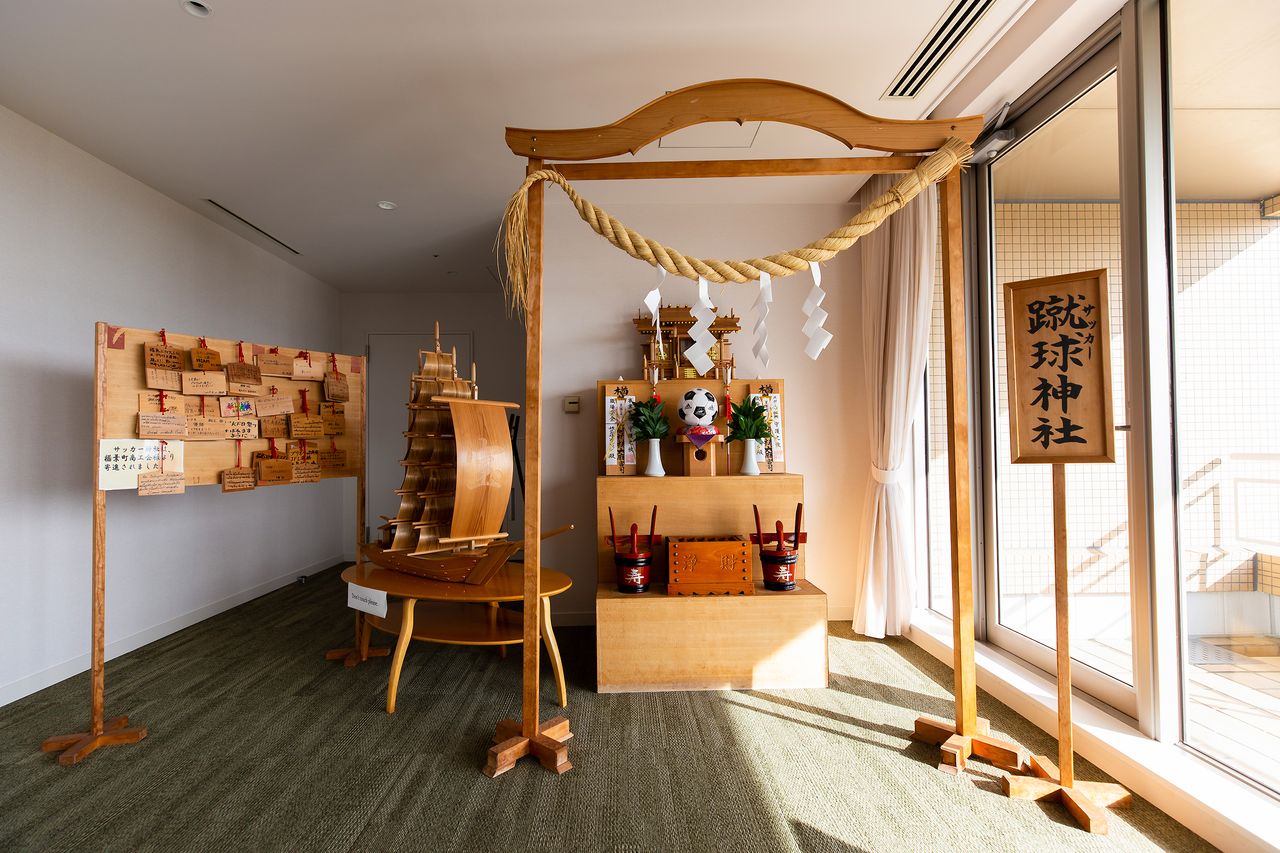 From a Mecca for Soccer Players to a Disaster Response Center

The J-Village opened on Fukushima’s Pacific coast in 1997. The area enjoys a more temperate climate than elsewhere in Tōhoku, which is known for its harsh winters, making it ideal for sporting events. Tokyo Electric Power Company built the J-Village with the aim of boosting the regional economy and the utility gifted the facility to the prefecture. 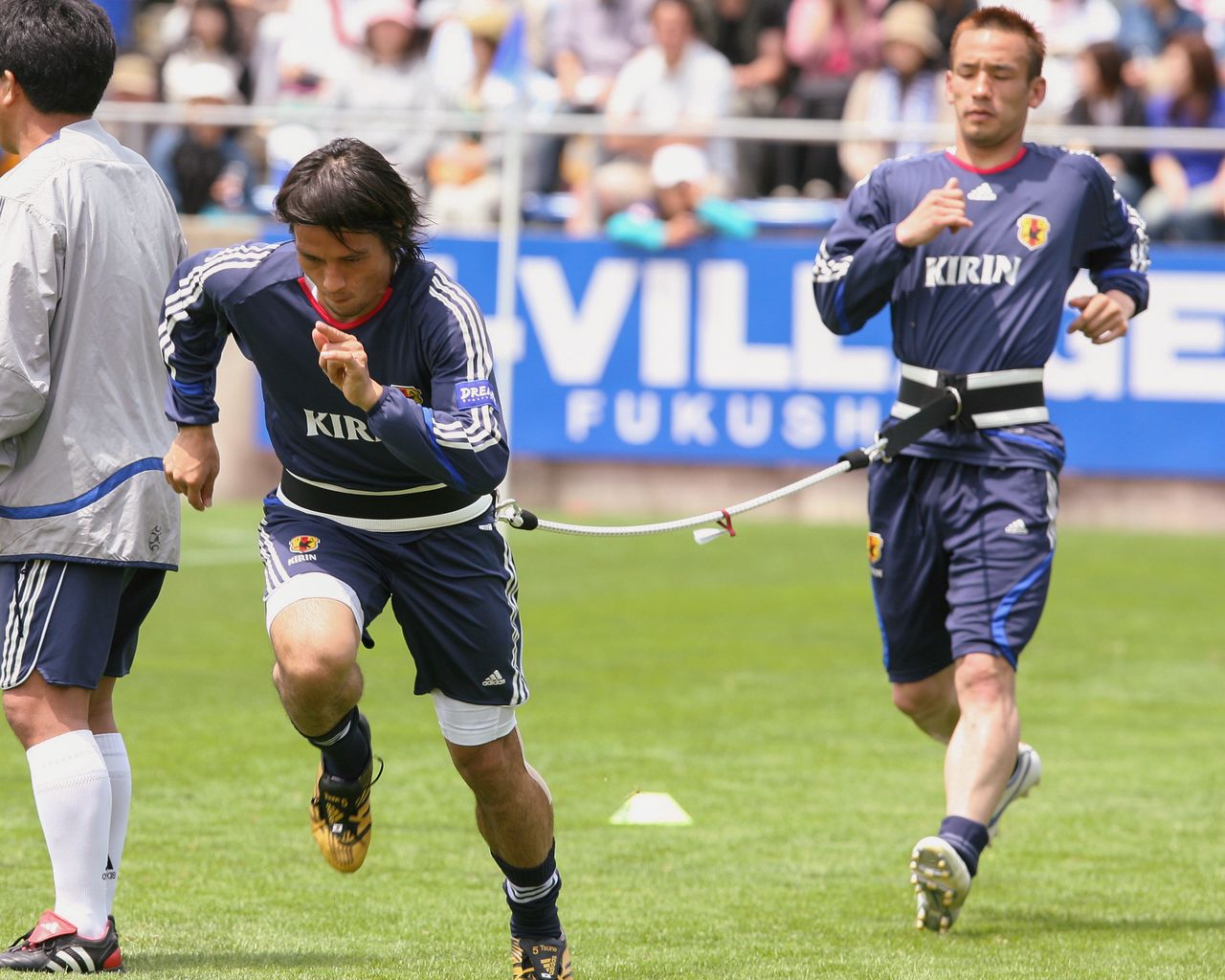 Japanese national team players train at the J-Village in May 2006 ahead of the FIFA World Cup. (© Jiji)

The site itself sits at an elevation of 50 meters and was not directly affected by the tsunami. However, the scene around the J-Village changed dramatically in aftermath of the disaster. Located 20 kilometers south of Fukushima Daiichi, the facility lies partly within the exclusion zone. It became a staging ground for emergency equipment like fire engines and Self-Defense Force vehicles. The natural turf pitches, once the pride of the facility, were turned into carparks and heliports. The stadium quickly filled with piles of used protective clothing and other waste, and was even used as temporary housing for workers. 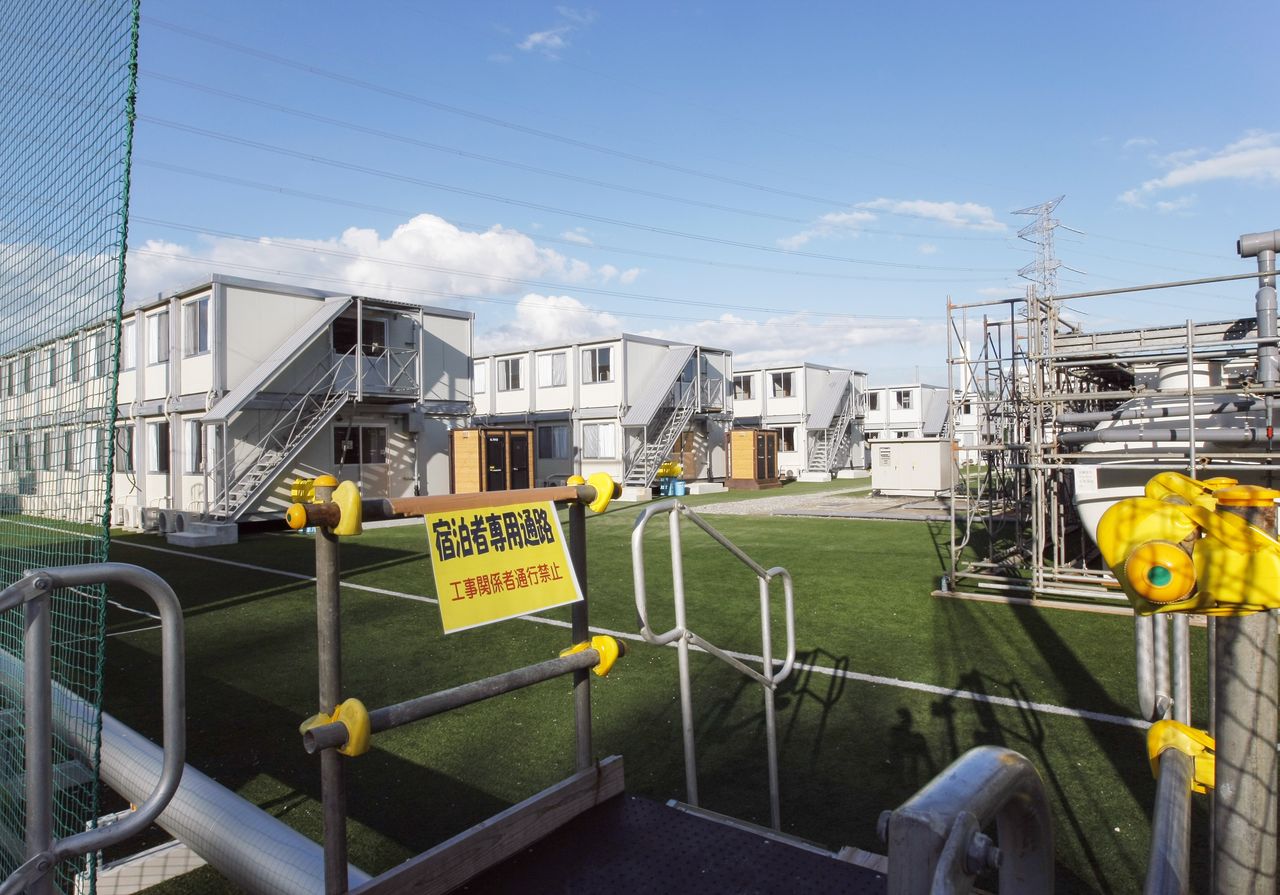 After the situation at the power plant began to stabilize, the grounds continued to serve as a way station for the decommissioning effort. Workers would first drive to the J-Village from surrounding towns, change into protective clothing, and then ride buses to the Daiichi site. On January 1, 2013, TEPCO transferred this role to a newly built headquarters at the powerplant.

The possibility of the J-Village returning to its role as a soccer training facility seemed remote, particularly as pitches needed to be relayed. However, Tokyo successfully bidding to host the 2020 Olympics provided impetus to rebuilding efforts and an agreement was reached to fully reopen the J-Village by April 2019 to allow Olympic athletes to use it for training. 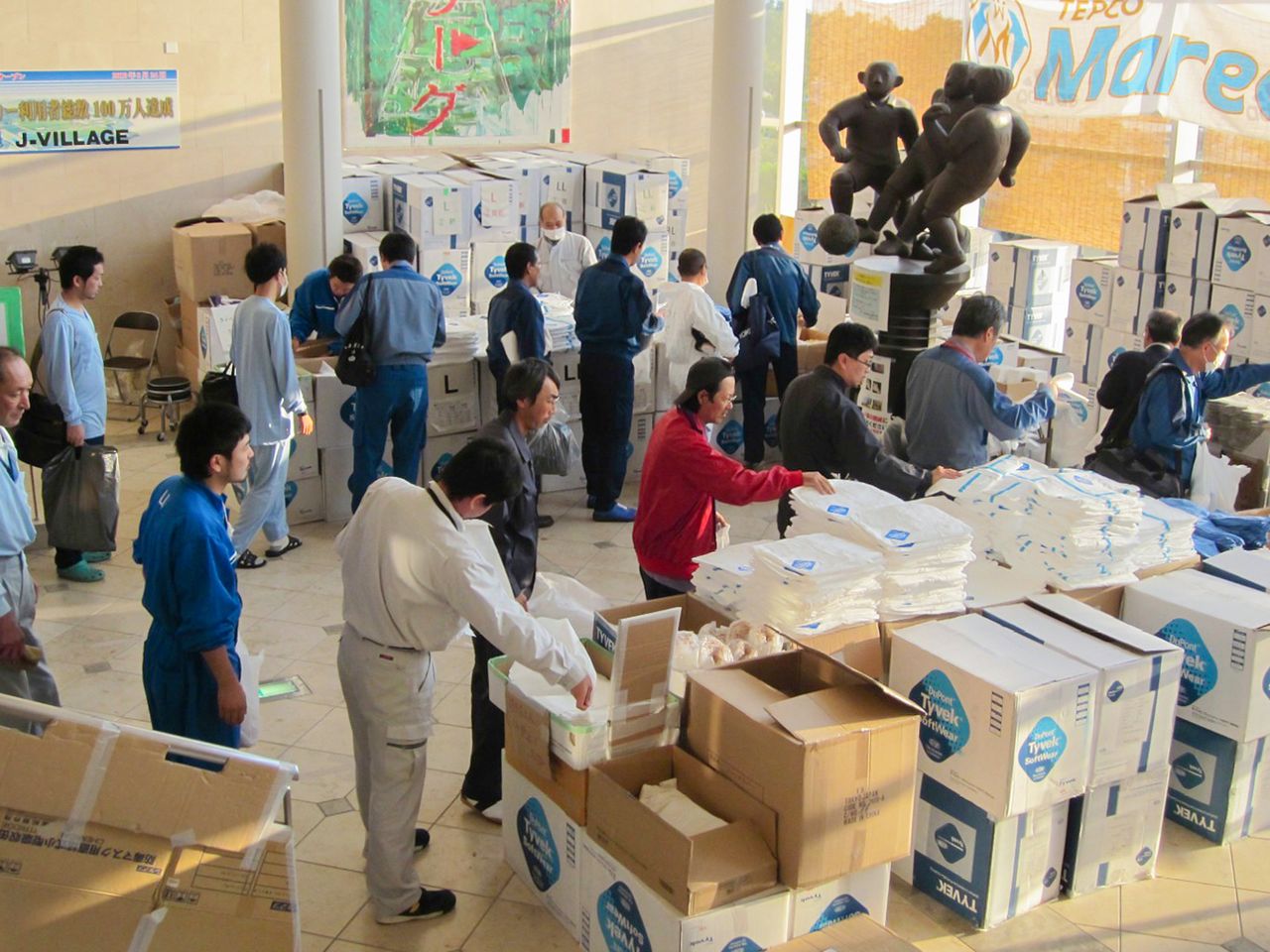 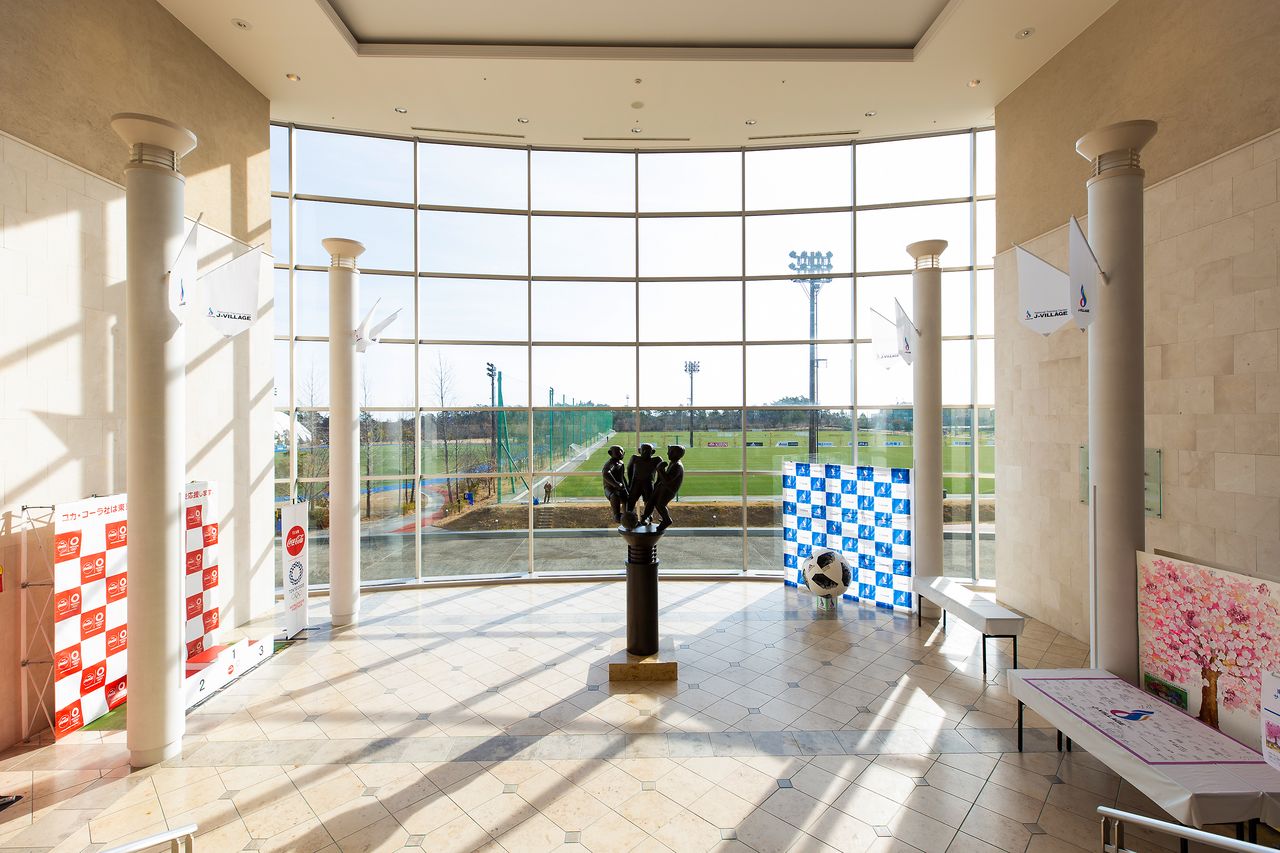 The lobby has been restored and is able to receive guests.

The facility partially reopened early in July 2018, followed by the grand reopening on April 20, 2019. 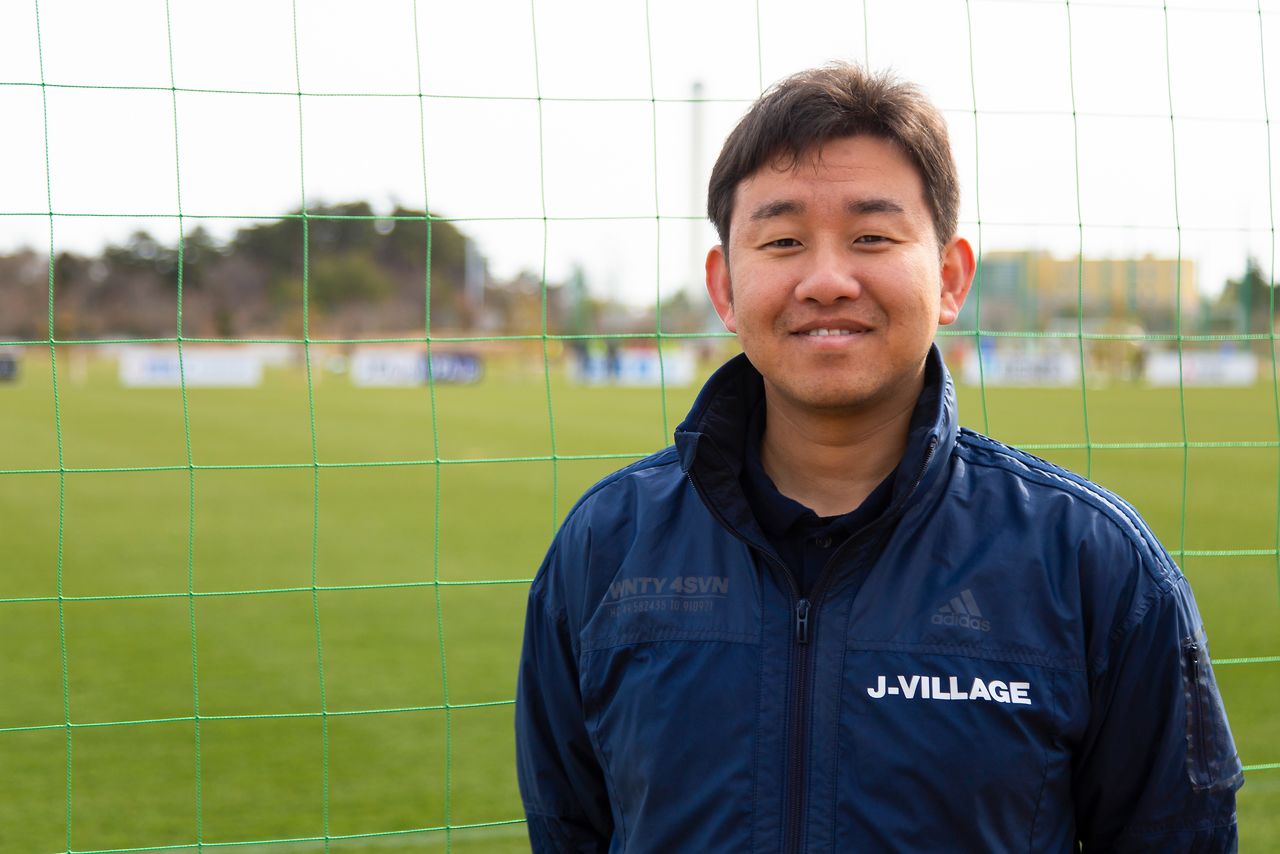 Takana Yūsuke, who oversees public relations at the J-Village, explains that the site has been used by national teams from around the globe. “The Argentinian national soccer team, which was a contender to win the 2002 FIFA World Cup, held its training camp here,” he states with pride. “That led to the Argentinian rugby team using the J-Village for their training camp ahead of the Rugby World Cup in Japan.” He says seeing the facility ready to host a second contingent of Argentinian athletes brought home the fact that the J-Village was back in business. 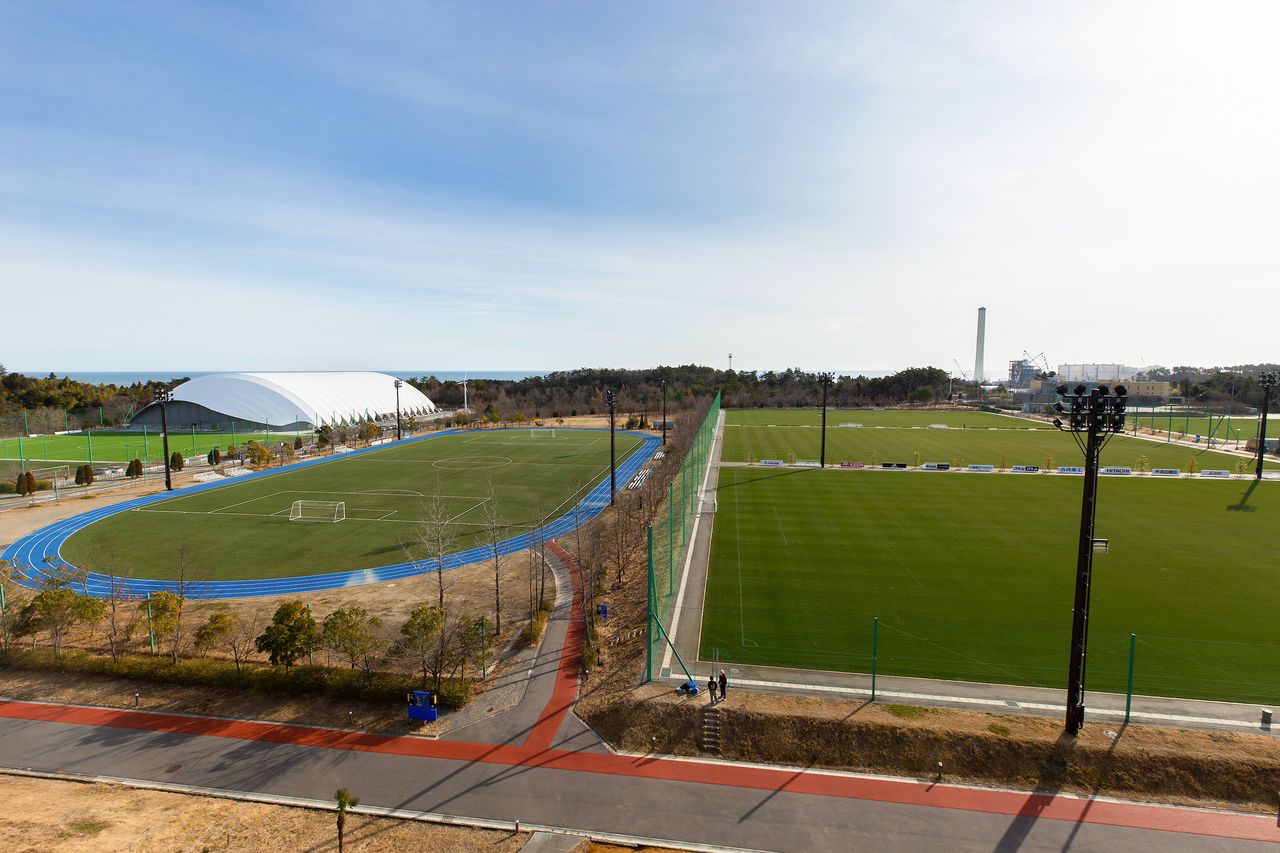 Soccer grounds at the J-Village. The three pitches to the right are natural grass and the oval ground to the left is synthetic turf. The Pacific Ocean can be seen beyond the covered all-weather practice facility in the background.

The all-weather practice facility features synthetic turf covered by a translucent roof to let in sunlight. According to Takana, the 22-meter high ceiling allows the pitch to be used for sports like rugby that have high kicks. Two-thirds of the ¥2.2 billion construction cost was covered by a grant from Japan’s sports lottery and the remainder was paid for by the Japanese government. While the old facility did have a covered half pitch for practicing in wet conditions, the new facility provides better protection from the elements. 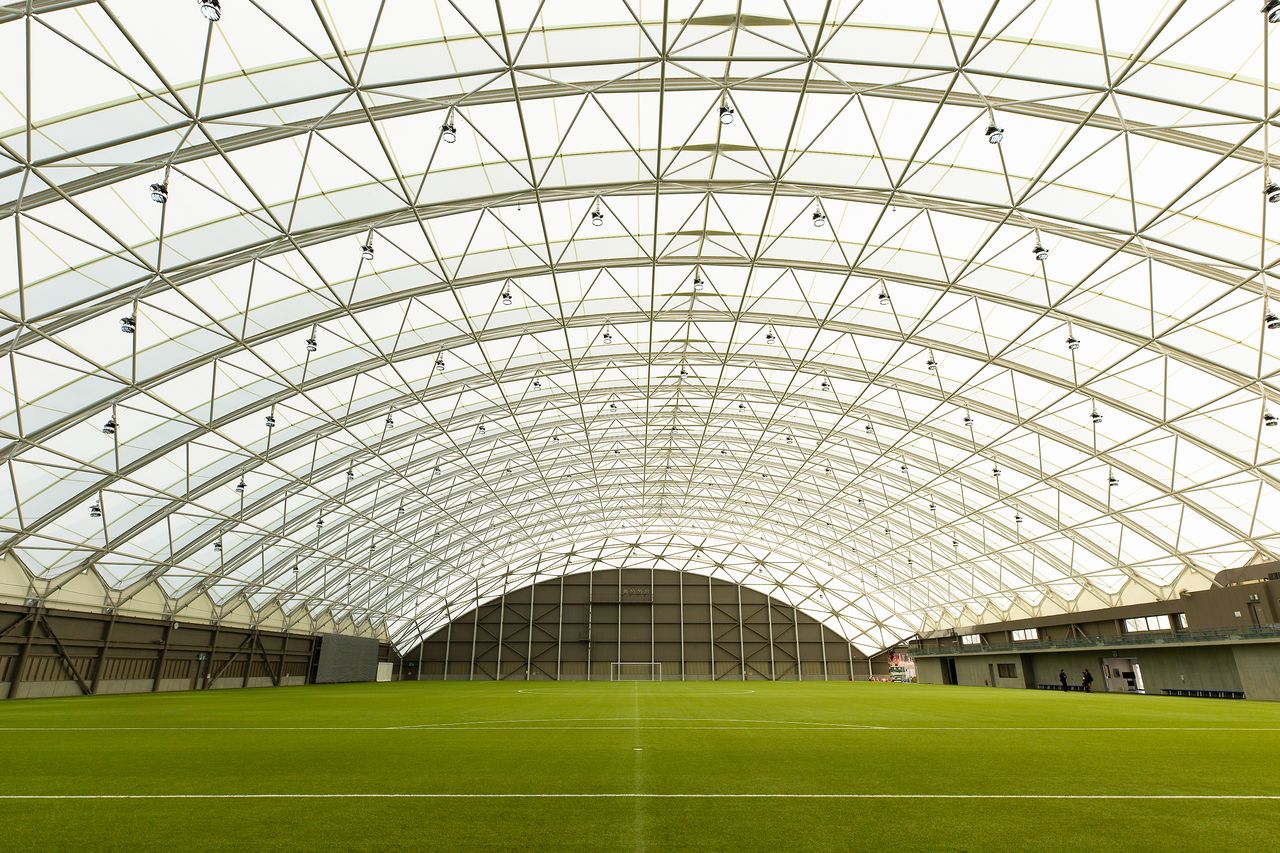 The all-weather training area is lit by natural lighting.

The refurbishment has attracted the attention of business users as well. The new annex increases guest capacity to 200 rooms, and the ground-level J-Village Hall is available for events and seminars. The J-Village Station on the Jōban line has been restored and is scheduled to open on March 14. 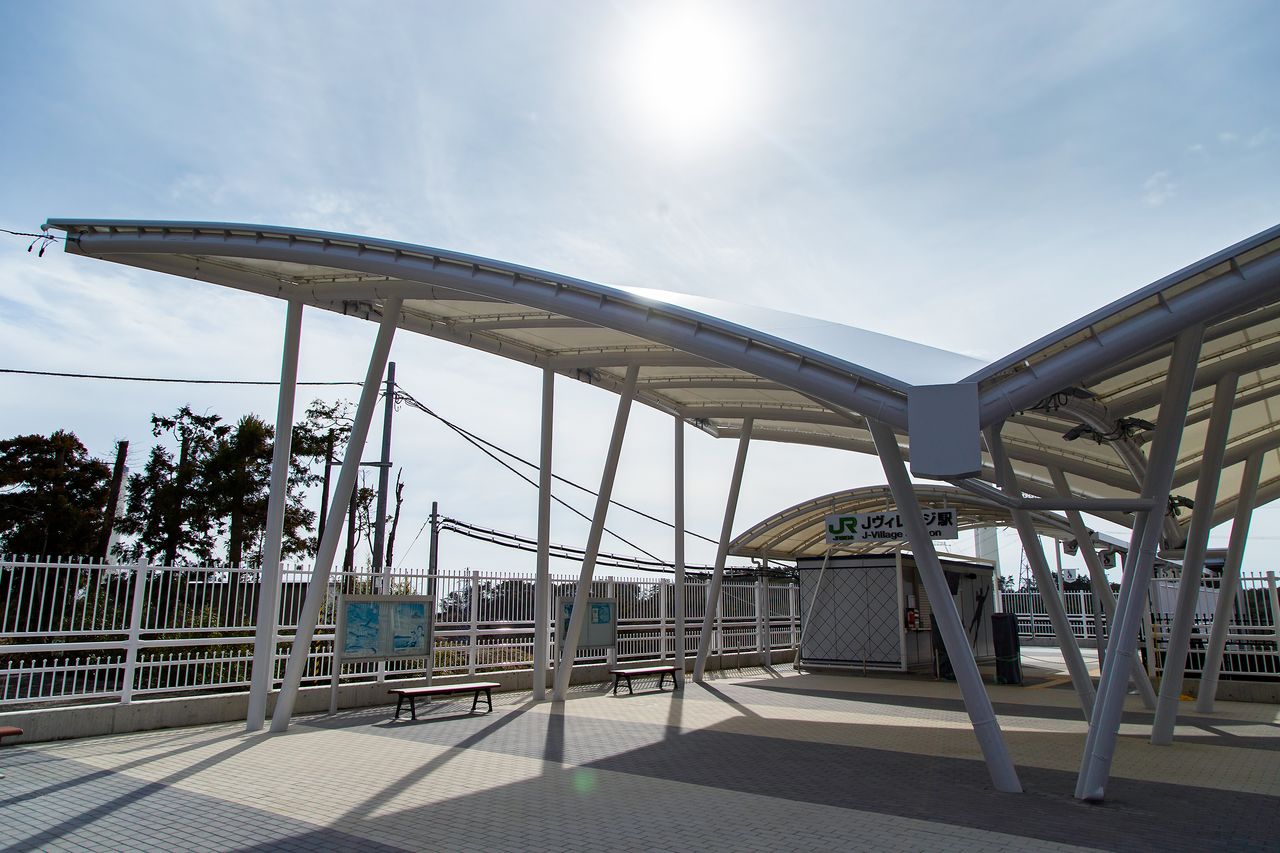 The Olympic torch will pass from the first to the second torch bearer at the J. Village Station. 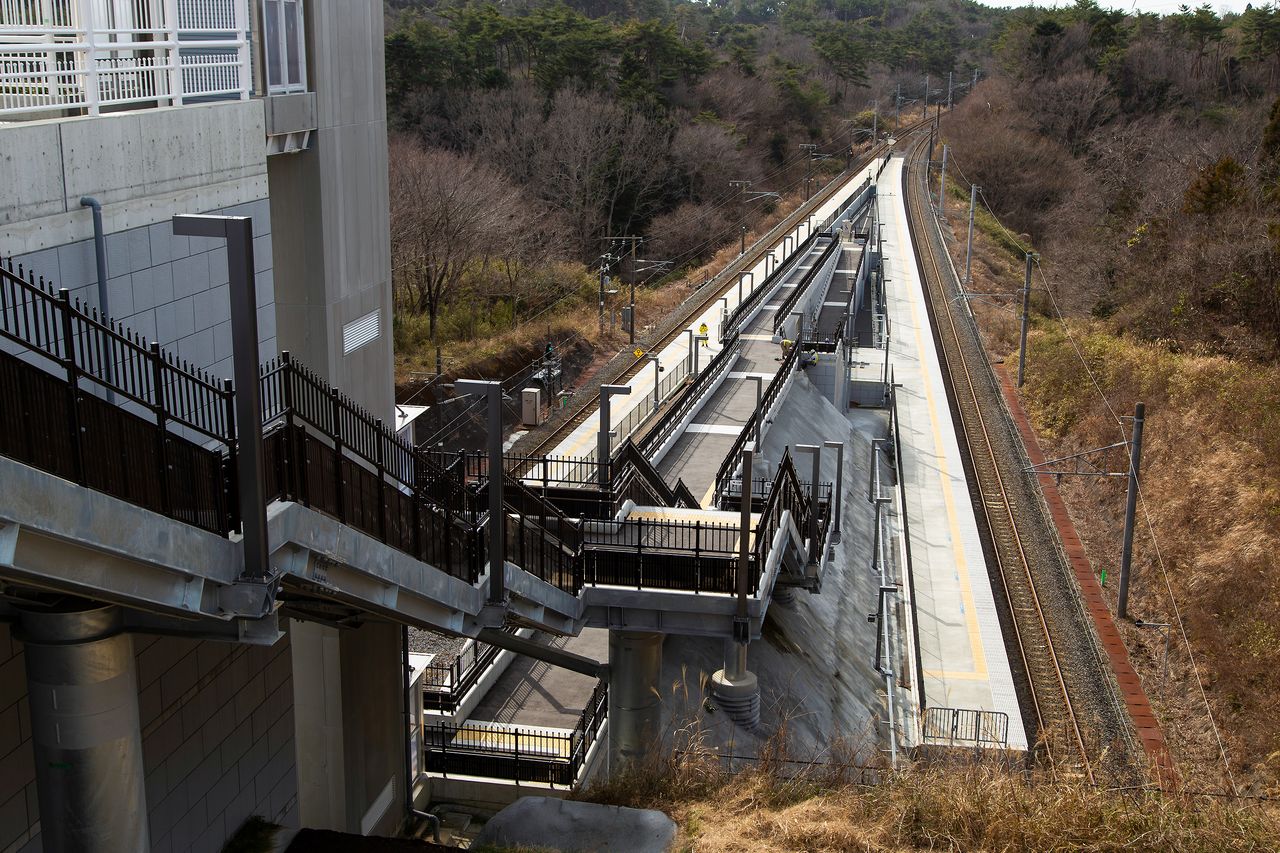 The station’s V-shaped platform sets 20 meters below the ticket gates.

There remains concern about radiation levels in the area, but according to the J-Village, the reading at the hotel entrance is 0.111 microsieverts per hour, compared to the 0.079 microsieverts recorded at Shinjuku in Tokyo and 0.128 microsieverts in Yamaguchi Prefecture prior to the nuclear disaster.

The Olympic torch relay will begin its journey around Japan from pitch 9, adjacent to the all-weather training facility. The first torch-bearer will be a former player for Nadeshiko Japan, a team that held several training camps at the J-Village before the earthquake and subsequently went on to win the 2011 FIFA Women’s World Cup in Germany. 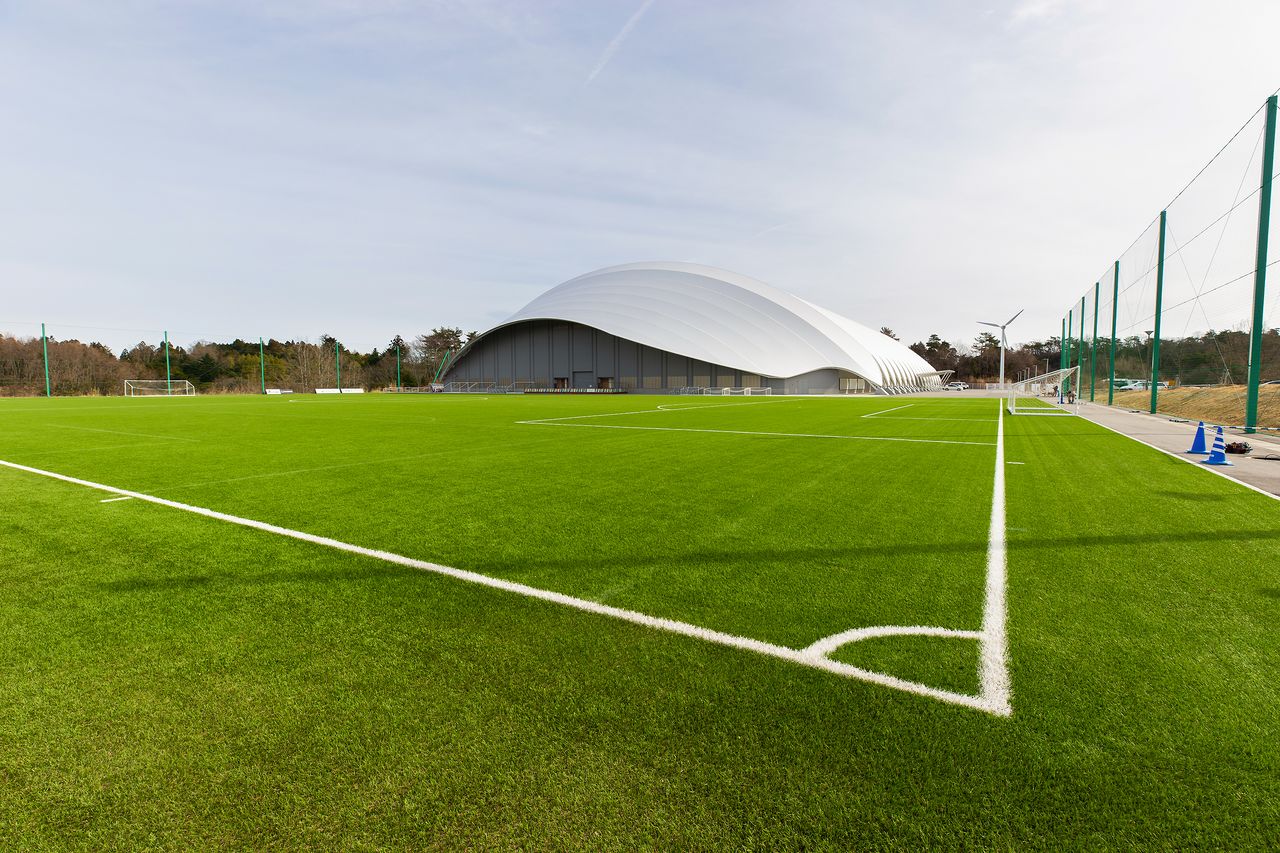 Pitch 9, the starting point of the Olympic torch relay.

(Originally published in Japanese. All photos by Nippon.com, unless otherwise noted. Banner photo: A natural grass turf at the J-Village.)