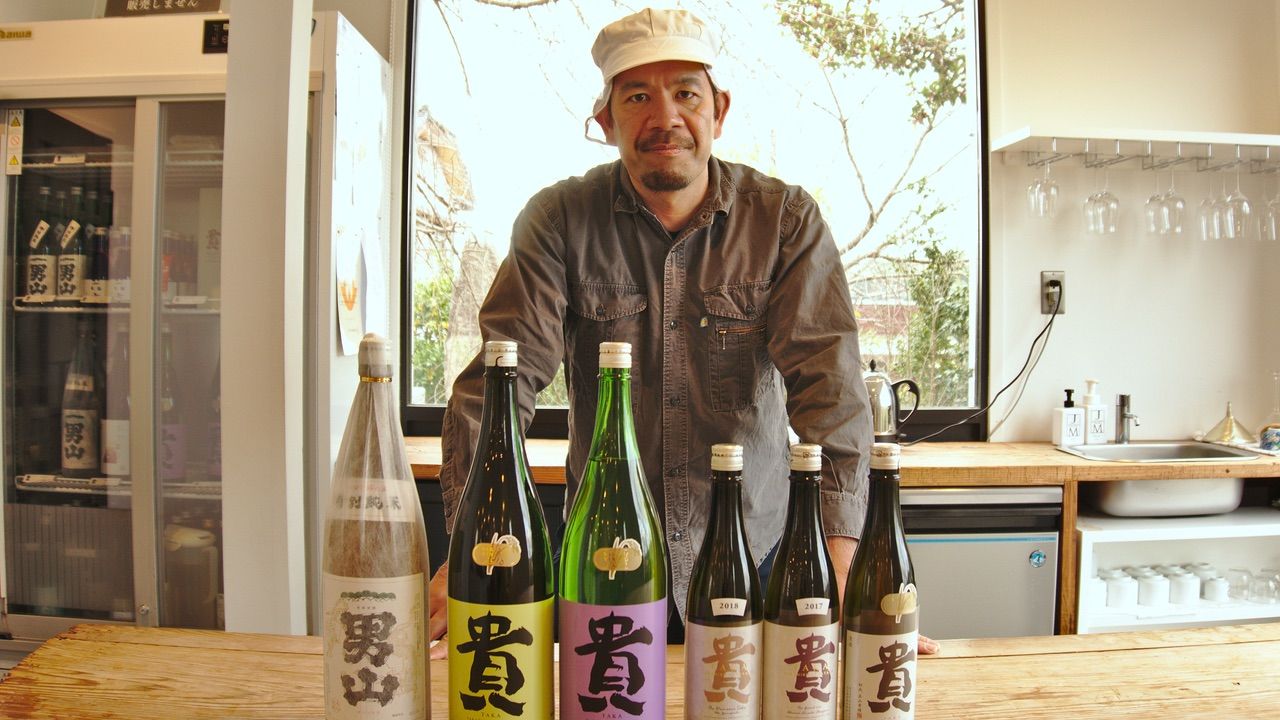 Lifestyle Food and Drink Mar 23, 2020
Nagayama Honke Shuzōjō, a small sake brewery in Yamaguchi Prefecture, is turning its back on the mainstream of Japanese sake-making with its focus on French winemaking concepts like terroir. A strict emphasis on locally sourcing all ingredients results in a unique drink with a different philosophy from others on the market.

Nagayama Honke Shuzōjō sits on the outskirts of the city of Ube, Yamaguchi Prefecture. A small river, the Kotogawa, flows past the front door of its main office, housed in a beautiful Western-style building dating back to 1919 (and a nationally registered important cultural asset). The surrounding scenery is the archetypical Japanese countryside dominated by rice fields and forested hills. It is this pastoral scenery that centers Nagayama’s tōji, or brewmaster, as he makes his sake.

Sake with a Different Focus

Nagayama Honke has been making sake in this spot since 1888. Until the current tōji, Nagayama Takahiro, took over, the main label was Otokoyama—a name likely familiar to many sake drinkers, because there are over a dozen makers using this name on the market, the most famous being from Hokkaidō. After he took over in 2001, Takahiro realized that any chance he had at success outside Yamaguchi would require a unique new name. This would also give him a chance to focus on making sake his way, without the pressure of maintaining the history of that older name. And thus, in 2002, the new label Taka was born.

“My first thought was to make junmai sake—using no additives beyond rice, water, yeast, and kōji mold—but my father was against it,” Nagayama explains. “Tōji of his generation mostly looked down on junmai, because they thought it resulted in more acidic sake. Honestly, though, that is more about the limits of the makers. They didn’t know how to make proper junmai, but techniques have come a long way.” 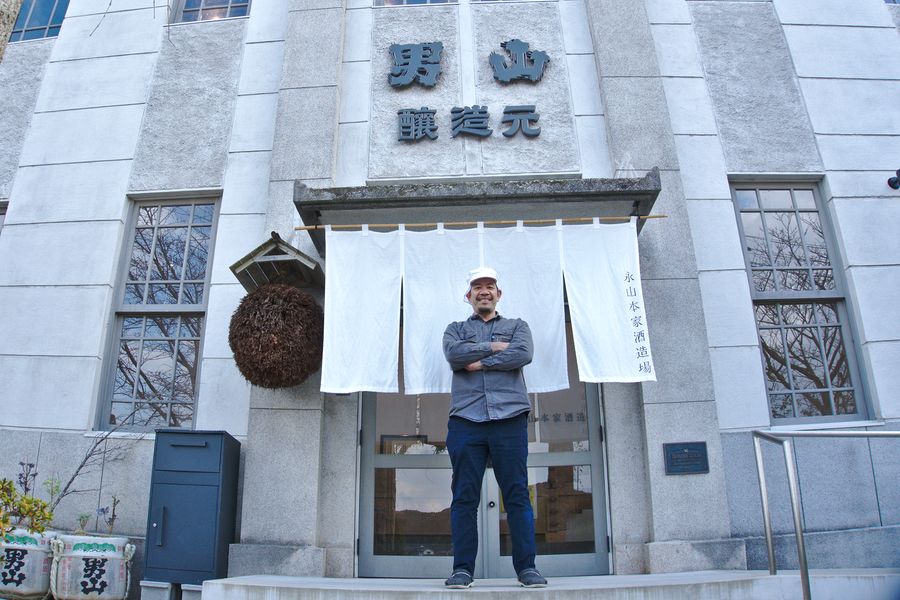 Nagayama Takahiro in front of his brewery. To the left of the noren curtain is a sugitama, a ball of cedar branches traditionally hung at the entrance of a sake brewery to mark the production of a new batch from the year’s rice harvest.

Since then, this label has focused on making premium sake, most of it junmai. Taka has won awards both domestically and internationally, but most of all it has earned a reputation among sake drinkers for the meticulous craft behind it. Drinks bearing the Taka label are monuments to balance, including a variety of full-flavored sakes that evoke the inherent qualities of the main ingredient: rice.

Behind the Drink, a Philosophy

Takahiro references French winemaking a lot when talking about sake. He visited France with a wine-selling friend in 2007, and again in 2009, where he toured wineries following the vin naturel philosophy. He credits this with causing a deep shift in his thinking about his own production.

“When I saw how deeply these small, but still successful, wineries valued nature, and drew a hard line on what can and can’t be done in winemaking, it really affected me. I realized we could do something similar when making sake.”

One thing he picked up from them is the word terroir, an idea that is sweeping the sake world right now—but not without controversy. This French word is often used in discussing wine, but few really agree on what it specifically means. Clearly, it’s from the Latin root terra, so it evokes images of the land and the earth. In usage, it broadly encompasses the specific climate and topography that influence a wine’s character, and thus is often used synonymously with “regionality” to designate similarities in style and flavor of wines from a given area. But in the sake world this term has yet to be accepted, simply because the connection between the natural world and the finished product is blurred.

Rice used in sake making often comes from all over Japan. It is rarely sourced locally, and the rice for a single batch of sake often comes from a mix of regions. Water is usually sourced on-site, but it is often filtered or adjusted to make it better suited to the tōji’s desired sake.

Then, there is the process. Sake is very much a crafted product, rather than a natural one. The process is what gives sake its aroma, its flavor, and its style. The influence of rice and water is real, but so is the influence of temperature control, timing, yeast choice, and myriad other points that are all decided by the tōji, not left up to the natural environment.

And Nagayama readily admits this. He grins when I bring up the active role of a tōji in sake making. “Of course, sake is a product of skill. I don’t like to talk about it, as a tōji myself, because it should be a given that the maker be skilled. So, it’s the other parts that I focus on. For me, terroir is about everything around us that we don’t usually think about. It’s like water to a fish—we don’t recognize it until we’re separated from it. It’s the air, the water, the community, the light and temperature. We have to show gratitude for all of these things that allow us to make sake, when we are making it.”

He adds that this is something he worries about with the current fad of more and more polishing (the seimai buai, or the ratio of sake rice that is ground away to leave what is considered to be a more refined grain core). “If you just keep polishing away the rice, then most of it goes to waste. There’s no gratitude there. It’s almost spiritual. If you want a Japanese term for terroir, it might be yao-yorozu no kami, all the spirits of the land, water, and air. The rice has a spirit, and so does the water, and the soil.” 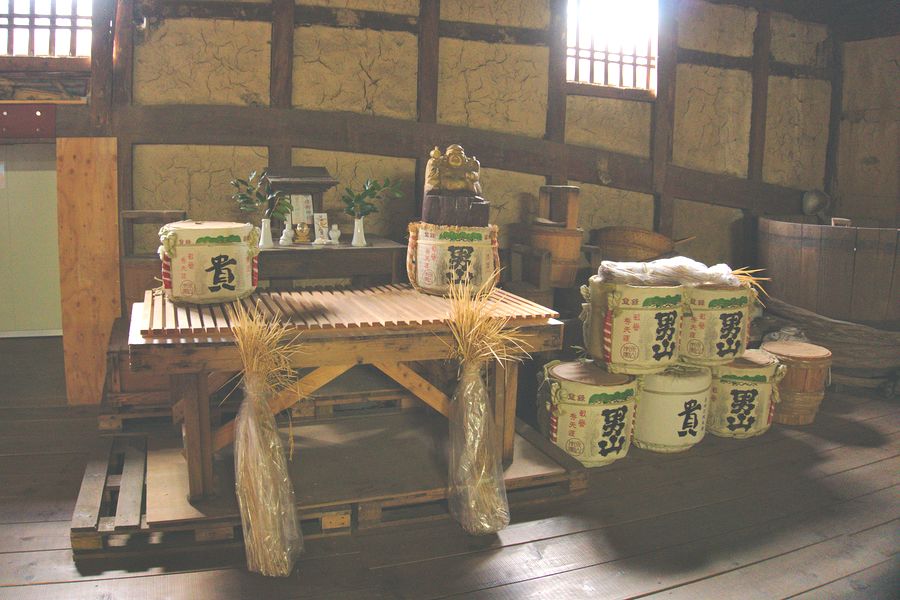 Casks of sake are placed with sheaves of locally harvested rice before the brewery’s altar.

So why does he use the French term, instead of the Japanese?

This does lead to an idiosyncratic use of the term, of course, that eschews the regionality of style for a focus on locality of production.

“I’m trying to work out my own philosophy with this word. And there are differences, of course, from wine. In French vin naturel they put very strict limits on all kinds of things like fertilizer and other artificial farming techniques, but I’m not so strict. Europeans seem to feel like human action isn’t natural, but in Japan we see that when you leave the wild landscape untouched, it can go out of balance. When humans work in the wilds, doing things like chopping wood and making charcoal with care and consciousness, that helps maintain balance.” This idea seems rooted in the satoyama landscape of Japan, I note—the patchwork of cultivated fields and tended wilds that also provide the necessities of life. He agrees. “I see human activity as part of nature, so there’s no need to cut it out of the terroir of sake.”

At the same time, Nagayama is very concerned about the environment. “As I get older, my attitude toward sake making has changed. When I was in my thirties, I wanted to make the very best sake I could. Now, in my forties, I want to think more about reducing our food mileage, and being more sustainable while we make it.”

Controlling Crops from Start to Finish

This is where Nagayama’s other major winemaking influence comes in: the Domaine system.

“I started Domaine Taka as a subsidiary to grow all our rice locally.” He takes me outside, and as we cross the Kotogawa flowing in front of the sakagura building he sweeps his arm across the fields around us. “These are ours. We still can’t grow all the rice we use, but we’re getting closer.”

He says that in addition to supplying the brewery’s own rice, he wants to support local farmers growing Yamada Nishiki, a highly prized sake rice. “This brand sells for a lot, but there’s not a big demand for Yamaguchi-grown Yamada Nishiki. Local farmers are struggling to find successors, and by creating a new market we hope to make it more attractive for future farmers. And, if they eventually can’t work the fields themselves, we buy them and work them ourselves.”

He takes me to a brand-new white steel building. “We just finished this in April 2019. It’s our rice processing facility. It wouldn’t make sense to grow locally if the farmers would have to ship it to another place for processing.”

He takes me inside, where there is a combine harvester parked next to rice cleaning, drying, and grading equipment. “We might be the only sakagura in Japan that has one of these!” he jokes as he points at the rice grader. This may not be true, but it is a rare thing for a sake producer to own, since sakagura owners were not legally allowed to grow and process their own rice until relatively recently, and most kura are still focused solely on brewing. 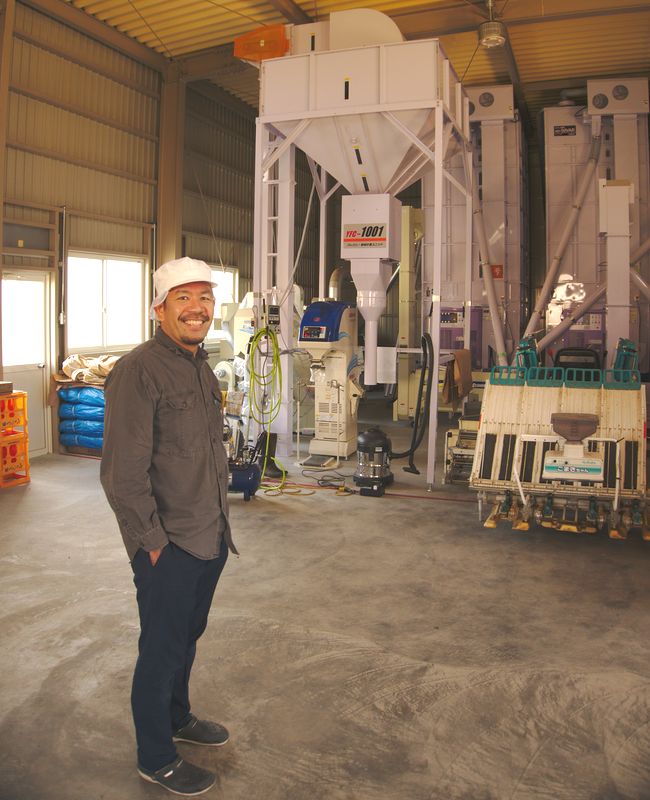 The brewmaster poses in front of a rice weighing/packing machine, another rarity for a sake producer to own.

Boasting facilities that can process rice from start to finish, Nagayama Honke can track everything about it: when and where it was planted and harvested, the conditions of its growth, and so on. This fully tracked rice is used in particular batches of sake, which can then be labeled with the rice “vintage.”

By tracking when and where the rice is grown, Takahiro can see how growing conditions impact the rice, as well as how the sake of one season stacks up against others. The Domaine system thus allows not only reduced food mileage, and better connection to the local community and agriculture, but also better understanding of how rice conditions impact the final sake flavor.

All of these come together to make the Taka label something special. Takahiro approaches terroir as part of the making of sake, and not the sake itself. It is the brewer’s philosophy, and as such whatever influence it has on the final product is as much mental and emotional as anything. The rice is local, and is lightly milled, because rice is the heart of sake and represents the work of valued members of the community.

The sake resulting from this is quintessentially local—not because of a particular Yamaguchi style or flavor, but because the tōji values those local connections and products. The resulting sake is still the result of his process, but the foundation is built on local soil, with local hands.