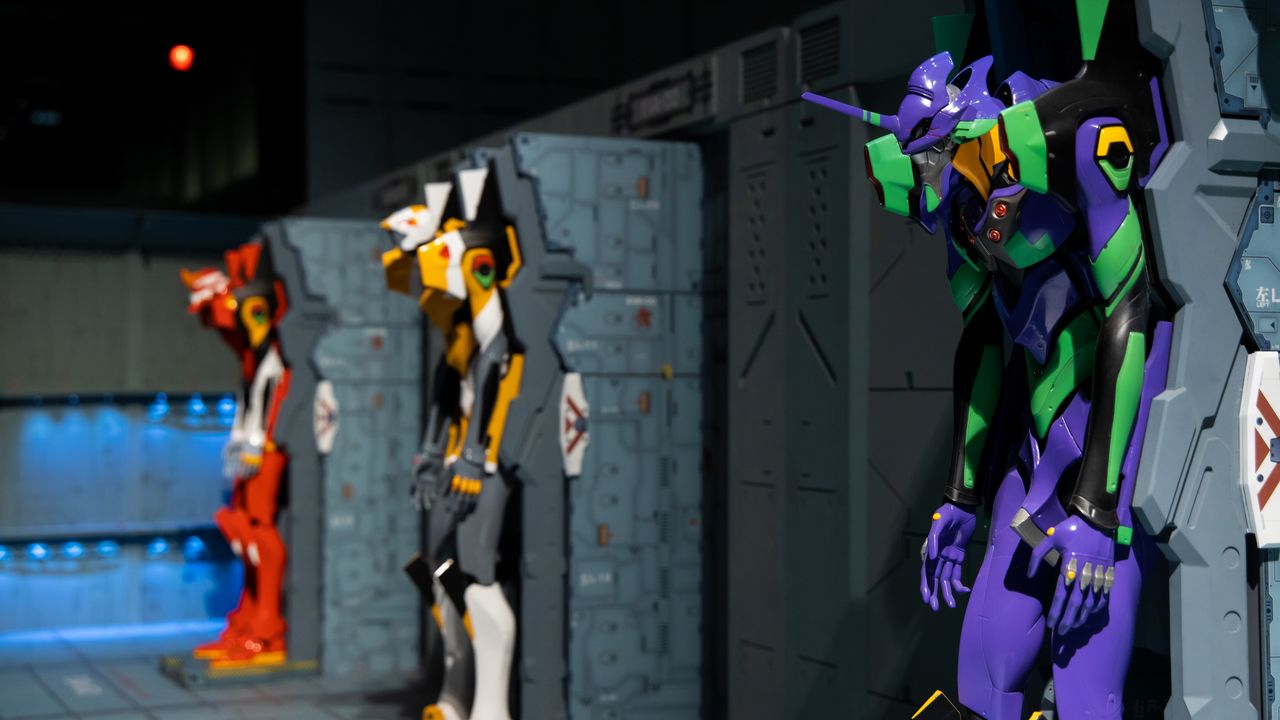 Travel Anime Jun 26, 2020
Small Worlds Tokyo in the Ariake district of Kōtō, Tokyo, is an indoor theme park of carefully crafted miniature fantasy worlds. Here you can do more than tour these worlds—you can become a part of them by purchasing residency rights and adding a scaled-down figure of yourself to your favorite scene.

Small Worlds Tokyo is located in the Ariake Butsuryū Center, just a 3-minute walk from the Ariake Tennis no Mori train stop on the Yurikamome Line. It is the world’s largest indoor miniature theme park, featuring miniature global villages and scenes related to popular anime characters reproduced in 1:80 scale. Due to the coronavirus pandemic, the theme park’s opening was delayed, but thanks to an infusion of roughly ¥20 million spent on infection-prevention measures, it was able to open at last on June 11. Taking photos is allowed and visitors are certain to find many Instagrammable spots. 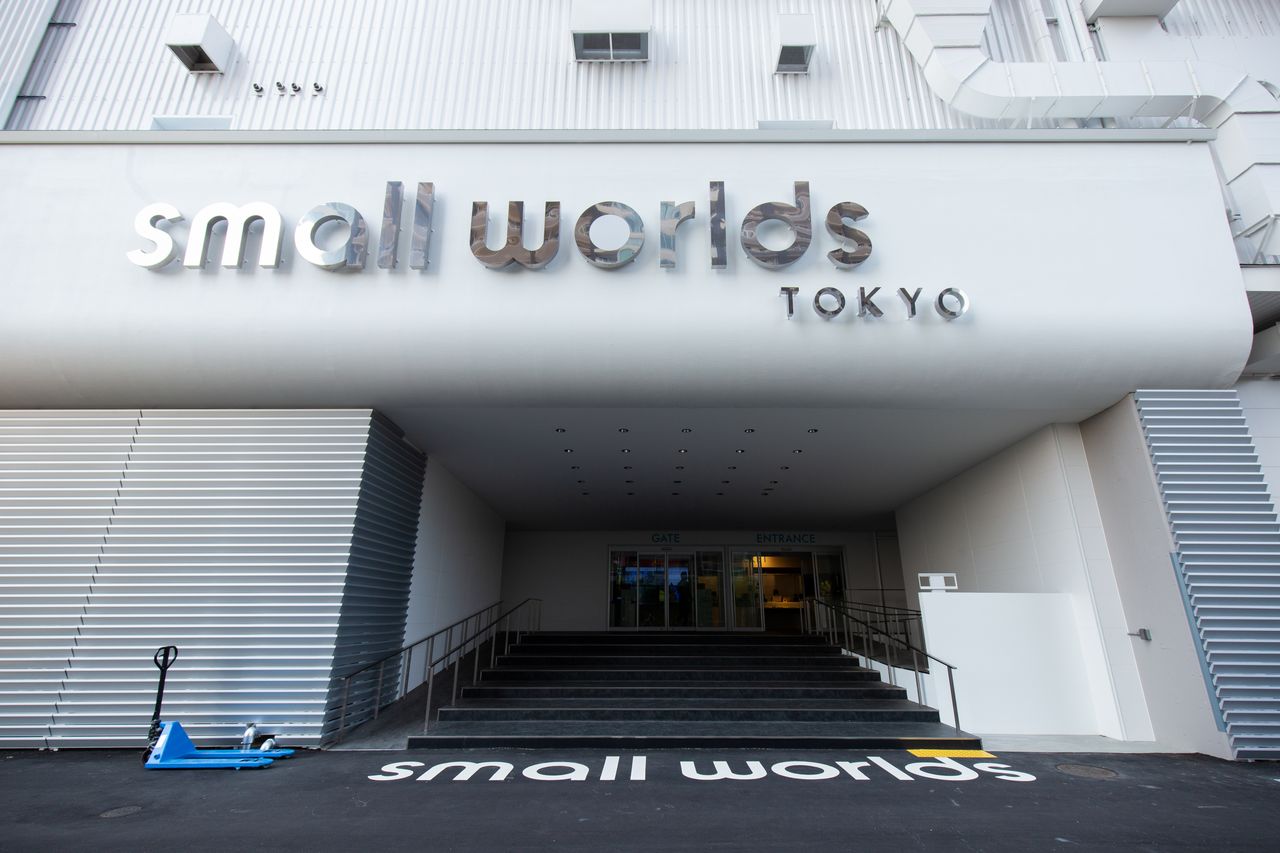 The entrance to Small Worlds Tokyo.

From the entrance visitors make their way through a time-travel-like tunnel to emerge into a fantastic arena of miniature worlds divided by area. The first area is the Space Center, filled with the loud sounds of blasting jet engines. Here, visitors can view an accurately recreated miniature reenactment of a 1970s Apollo program Saturn V rocket launch as well as the launching of a futuristic space shuttle.

The miniature scenes of Small Worlds Tokyo are not only carefully crafted and accurate reproductions, they also move to the accompaniment of surround sound. The Space Center reverberates with the countdown before blastoff, followed by the boom of the engines as the rockets take off with dramatic flames and billowing smoke. 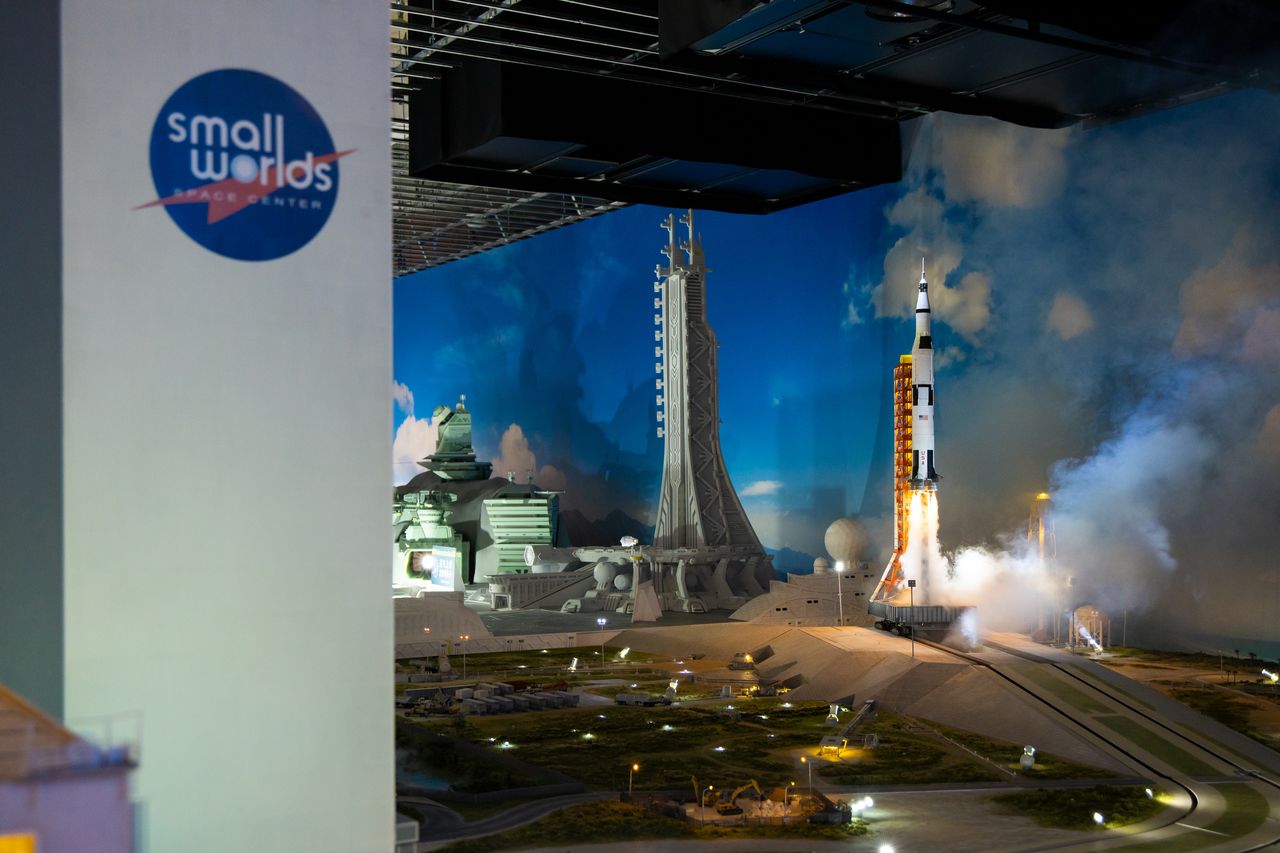 The launching of the powerful Saturn V rocket that propelled Apollo 11 to the moon.

The Global Village comprises five fictional “countries” patterned after twentieth-century Asia and Europe but populated with fantastical creatures as well as people. Lighting is used to create the effect of day fading into night every 30 minutes. In an urban scene that appears to be a mixture of Hong Kong and Shanghai, neon lights beckon enticingly as the sun sets overhead. Visitors can play in the fantasy world spread out before them by pressing strategically placed buttons to send bicycles spinning and prod sleeping dragons awake. 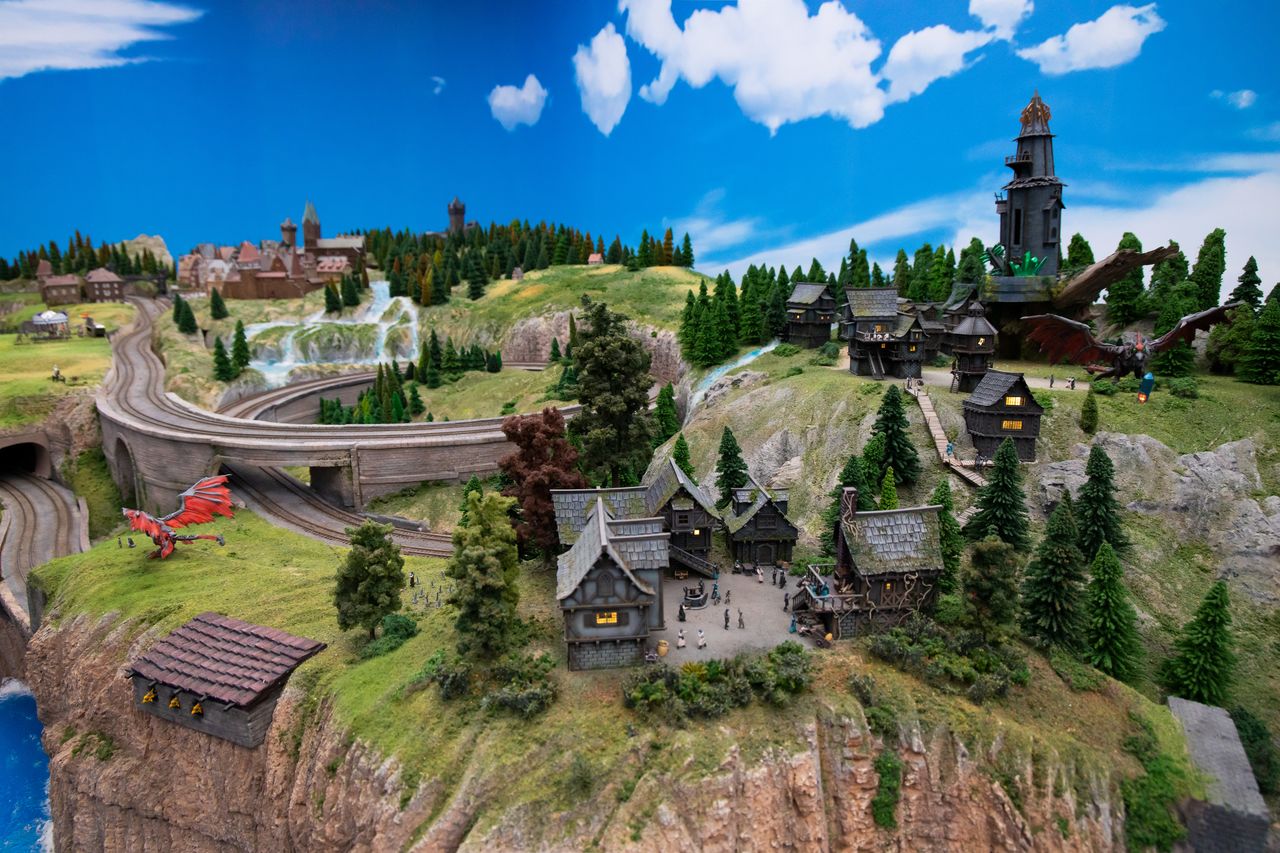 The Global Village is a fantasy world including dragons and other magical beasts. 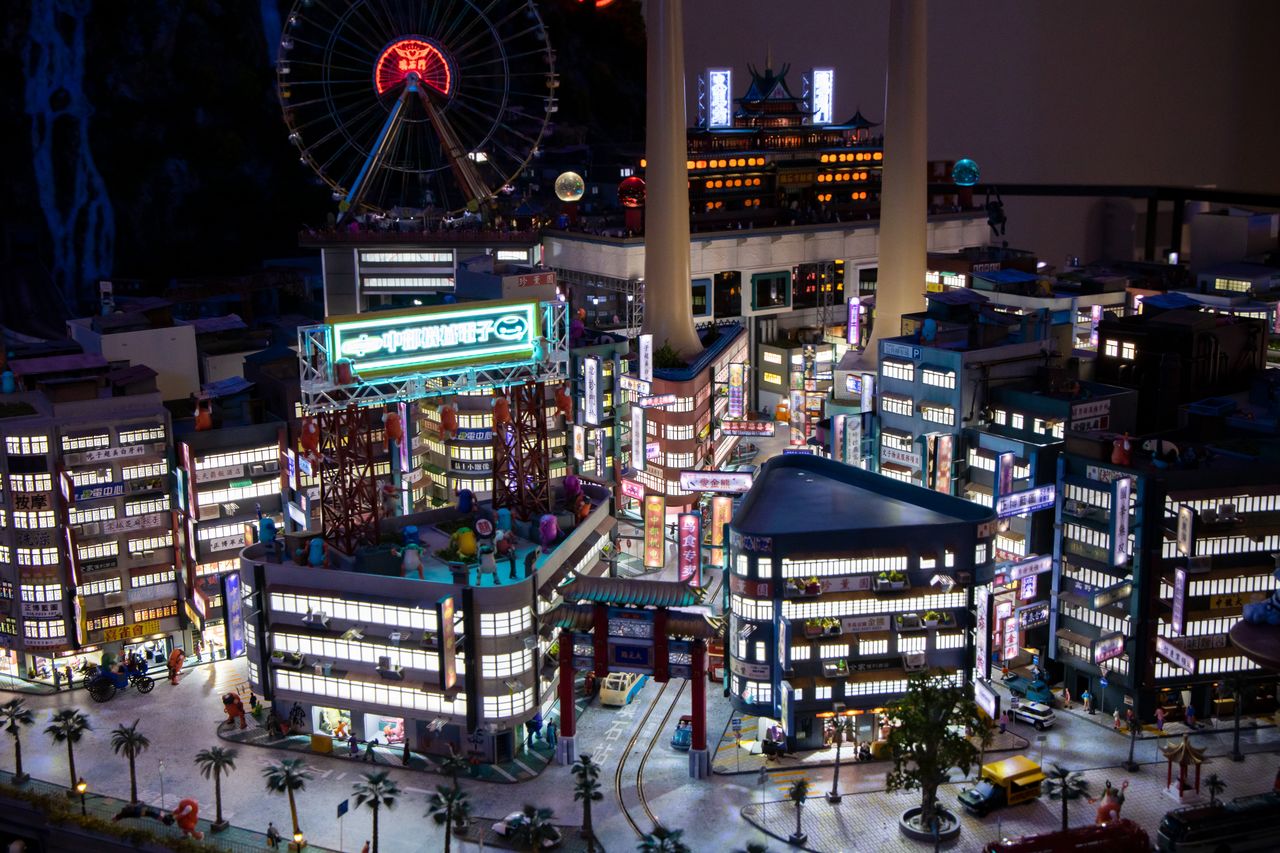 Neon lights glitter in a re-creation of a Chinese nightlife district.

In the Pretty Guardian Sailor Moon area, visitors are treated to a nostalgic scene of Tokyo’s Azabu Jūban district from the 1990s, when the anime series was most popular, and a futuristic “Crystal Tokyo” of the thirtieth century far off in the background. The Azabu Jūban scene includes artfully crafted exact replicas of the exteriors and signs of well-known restaurants that are no more.

The area teems with human figures measuring around 2 centimeters tall going about their business amid miniature structures and objects built on the park’s standard 1:80 scale. Sailor Moon and her valiant buddies live here too, and visitors can enjoy looking for their favorite heroines. 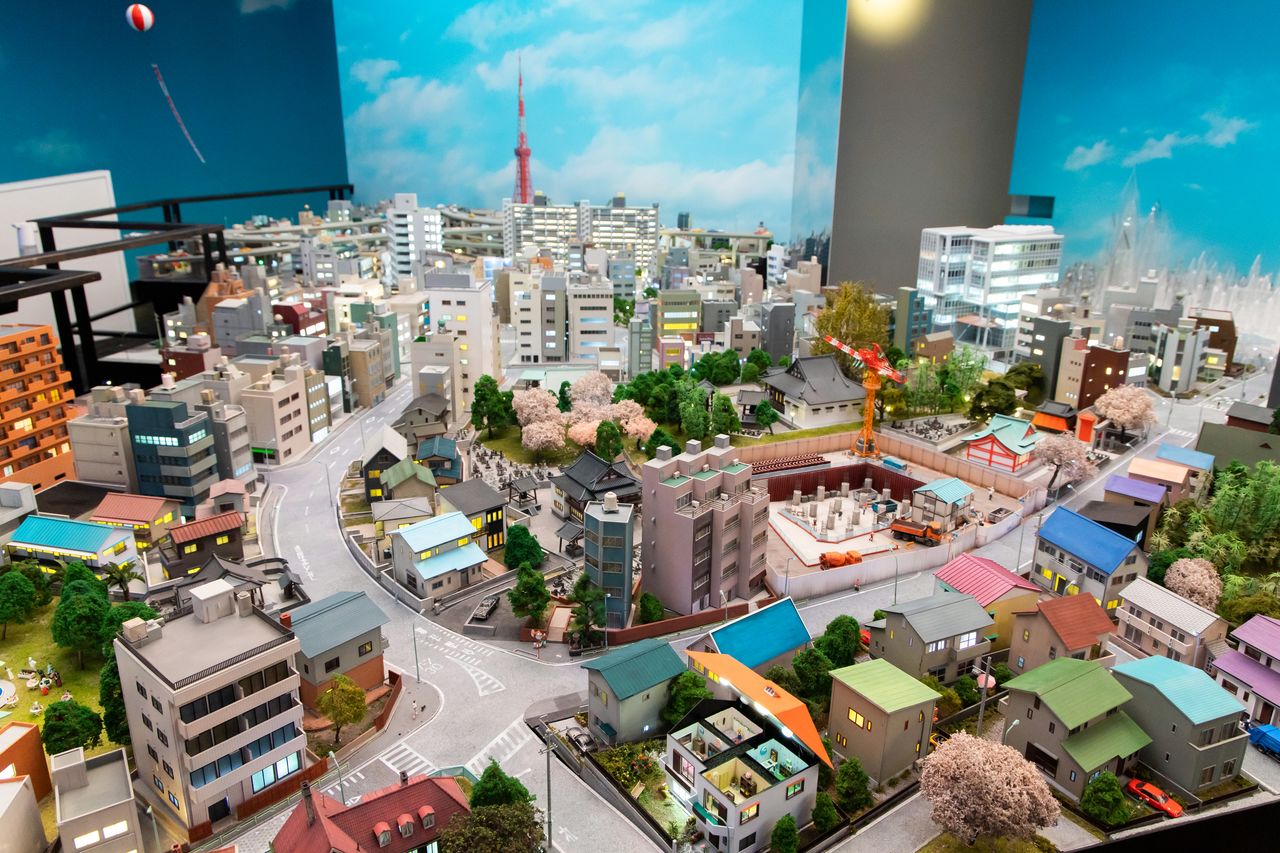 Tokyo Tower looms far in the background of Azabu Jūban. The house in the foreground is where Tsukino Usagi lives. (© Takeuchi Naoko) 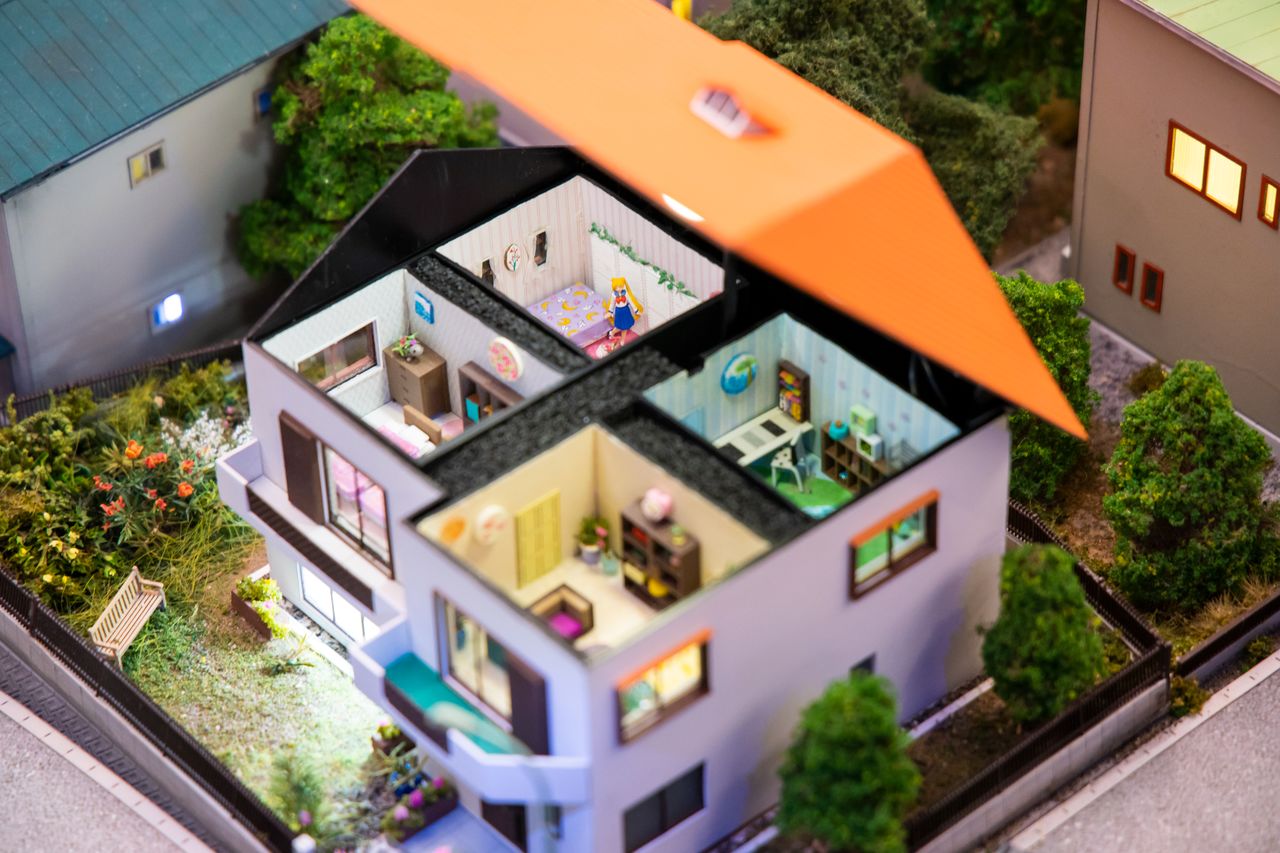 Every so often, the roof of Usagi’s house lifts open to reveal rooms with the exact same furniture and wallpaper as in the original anime series. (© Takeuchi Naoko) 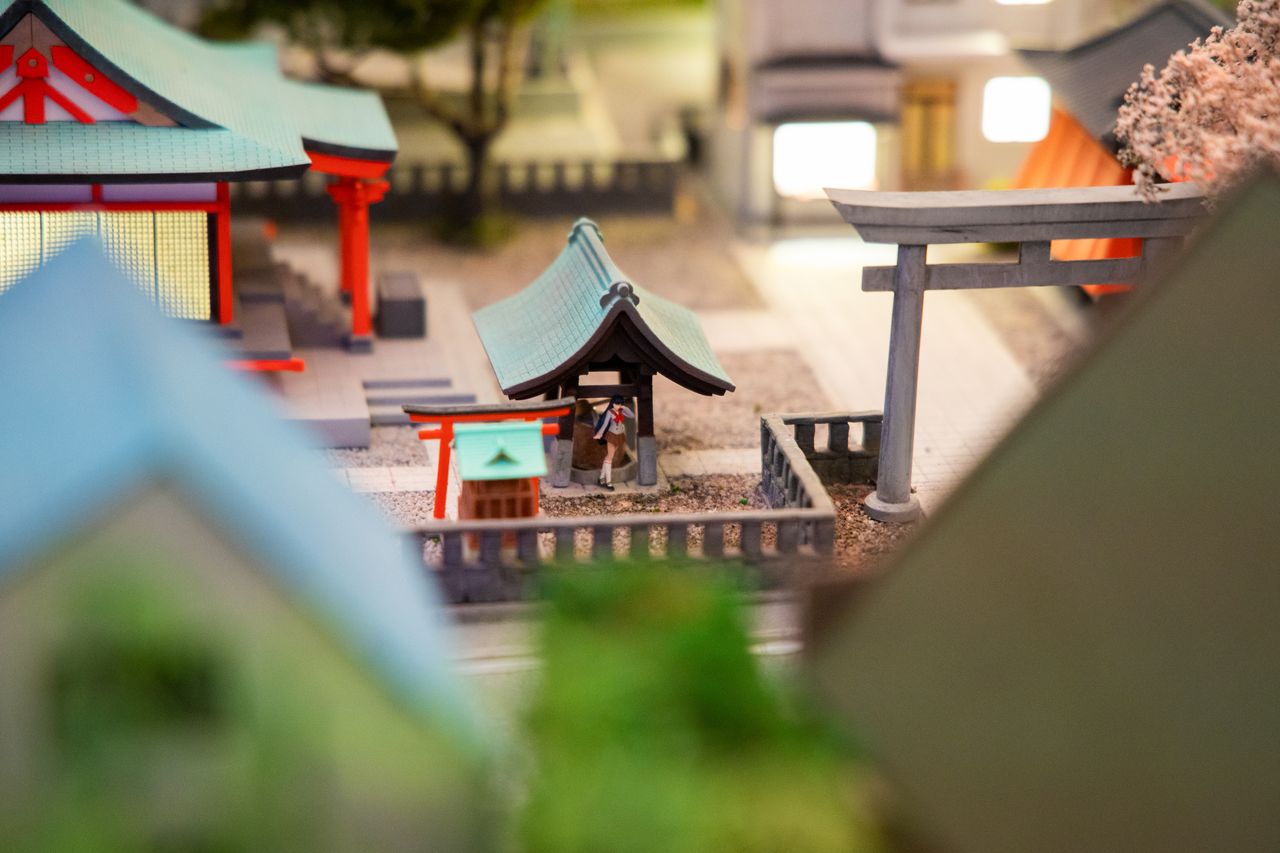 The Sailor Moon Guardians are not easy to find. (© Takeuchi Naoko)

Small Worlds Tokyo has its own airport modeled after the Kansai International Airport. Airplanes, runways, arrival and departure lobbies, and baggage claim areas are all reproduced in minute detail. Visitors can take a break in a rest area designed to resemble an airport lounge, sit back, and enjoy watching the planes land and take off, making this a special happy place for airplane fans—especially now that air travel is not so possible due to the global pandemic. 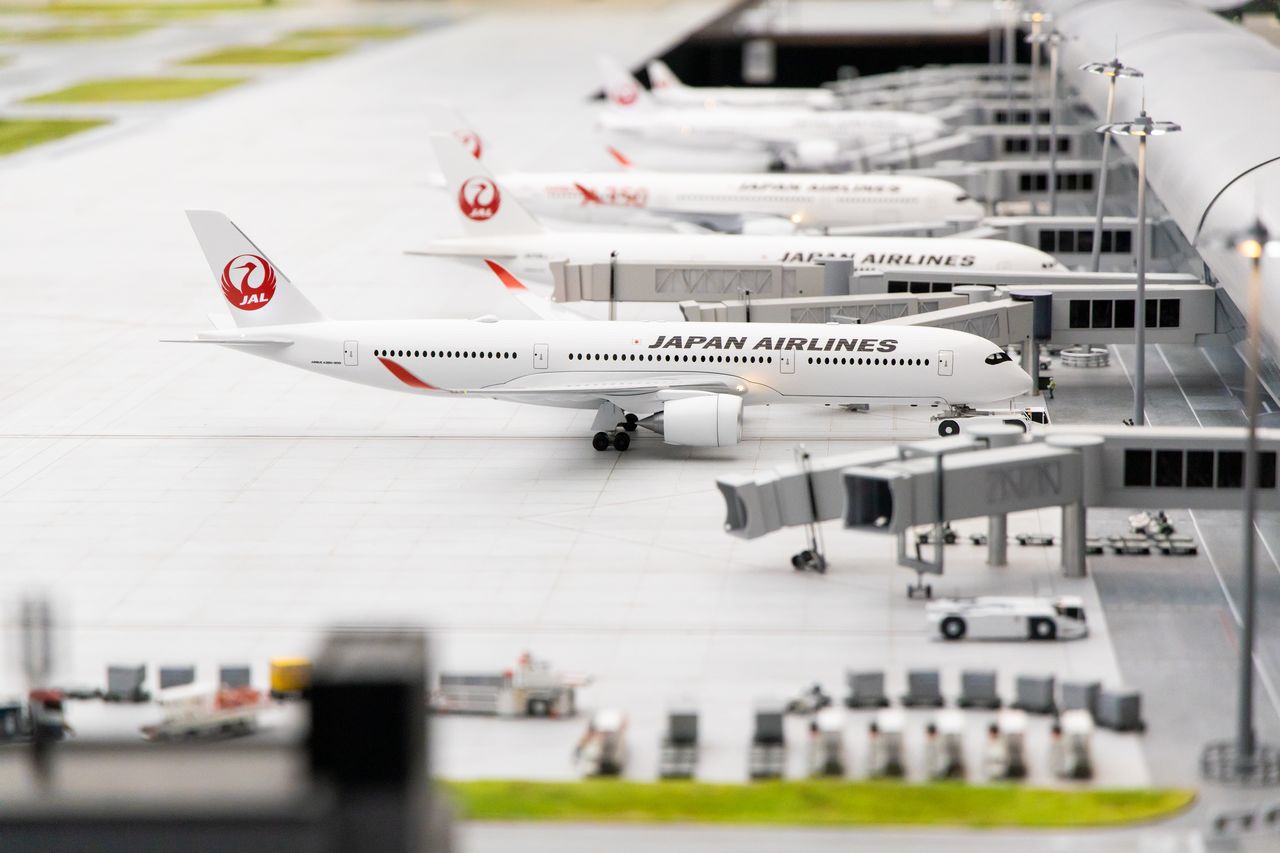 Small Worlds Tokyo worked closely with Japan Airlines and Kansai Airports, two of its official partners, to create a realistic miniature of the Kansai International Airport.

This finally brings us to the highlight of the theme park, Evangelion. Two areas are dedicated to the globally popular anime. The first is Evangelion: Cage. Here EVA Unit-00, Unit-01, and Unit-02 stand tall in their cages ready for launch. The second area is Evangelion Tokyo-3, where the Evangelion series protagonist Ikari Shinji and his friends live. Tokyo-3 is a fortified megapolis on the shores of Lake Ashinoko in Hakone. When the mysterious enemy life-forms called Angels attack, the whole city and its high-rise buildings slowly sink to disappear underground. 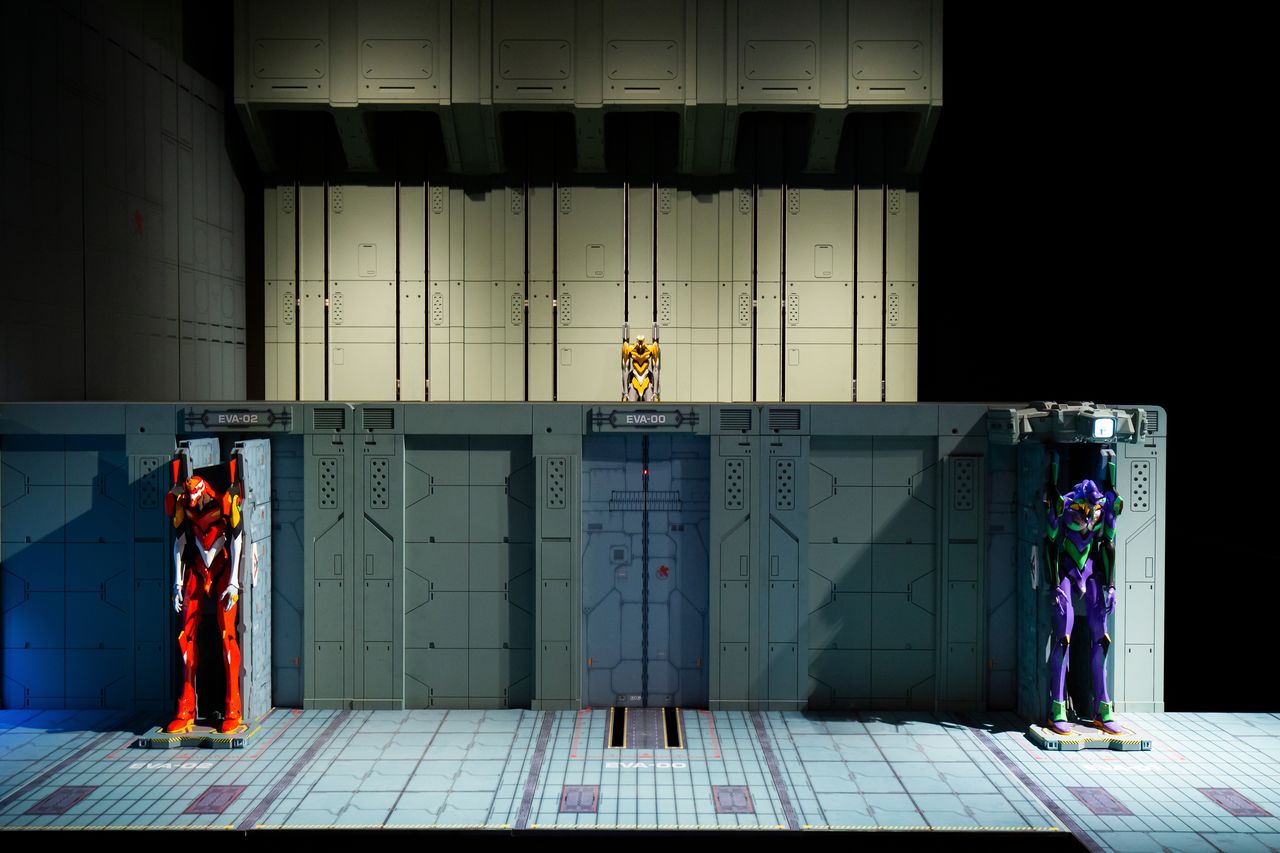 The three Evangelion figures are launched one after another from their cages. (© Khara) 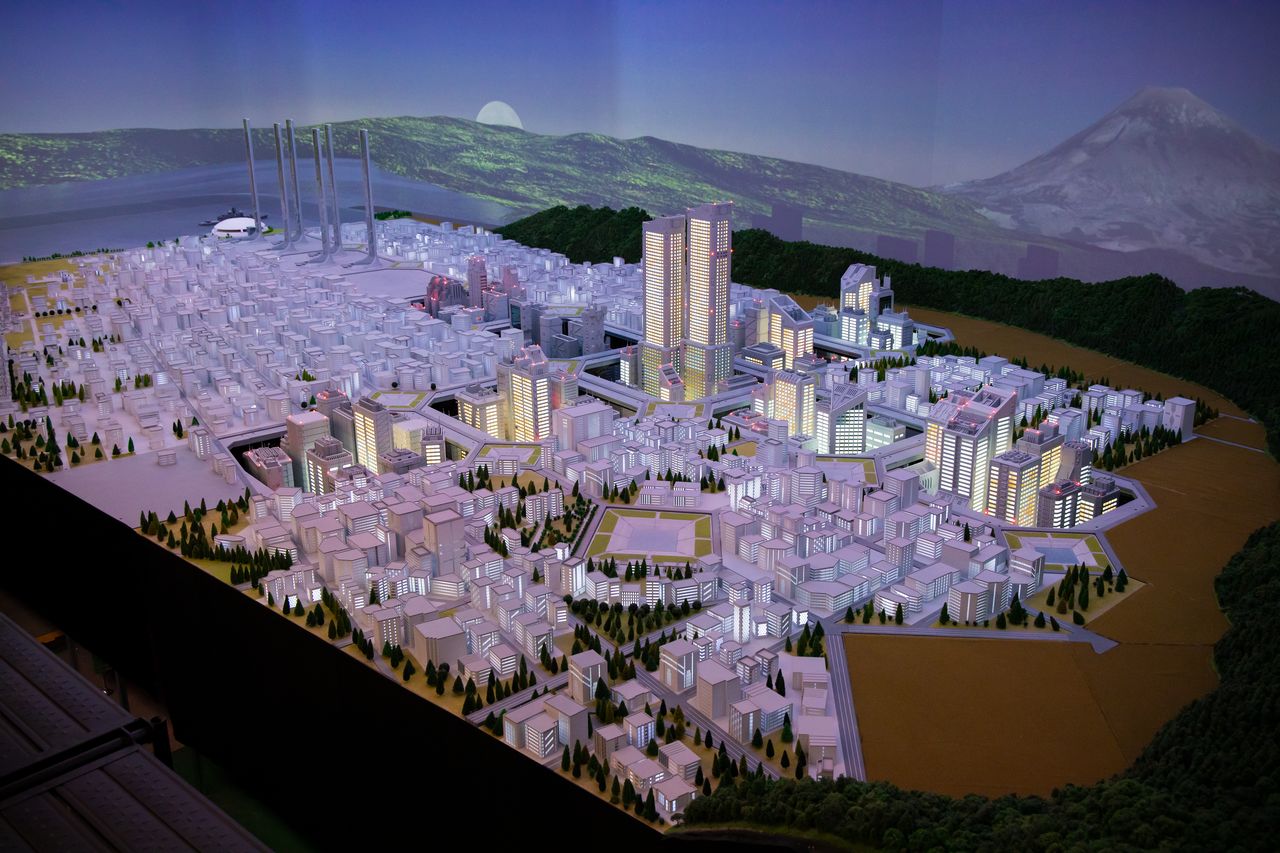 The sinking of the megapolis Tokyo-3 is a dramatic scene. (© Khara)

All the Small Worlds Tokyo scenes are magnificent, but the most appealing aspect of this theme park is that you can live in it! By purchasing Residency Rights, visitors can have their own personalized miniature figure made using 3D scanner technology and have it placed in their favorite area for one year.

In the Evangelion: Cage area, visitors can choose to don one of the Nerv personnel uniforms so that their 3D miniature figure can be placed with the other main Nerv characters, such as Ikari Shinji and Ayanami Rei. Your personalized figure will not be placed until roughly two weeks after the 3D scan, but the purchase of residency rights includes an annual pass with complementary one-day passes for accompanying family members and friends so you can visit any time to see your figure and take photos. Additional Small Worlds are scheduled to be built soon in Okinawa and overseas. 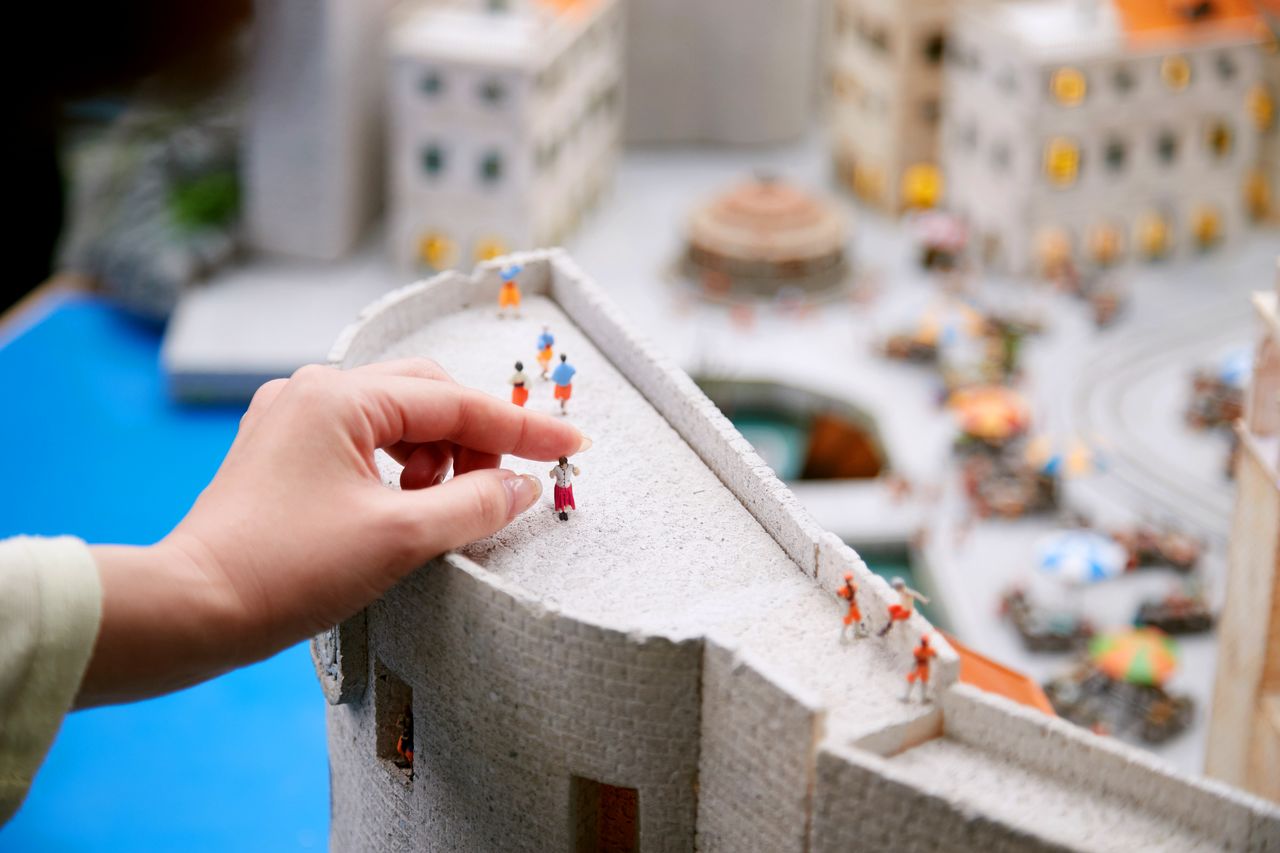 Placing a personalized figure. The 3D scanning technology means you can wear your favorite costume and pose as you please. (Courtesy of Small Worlds) 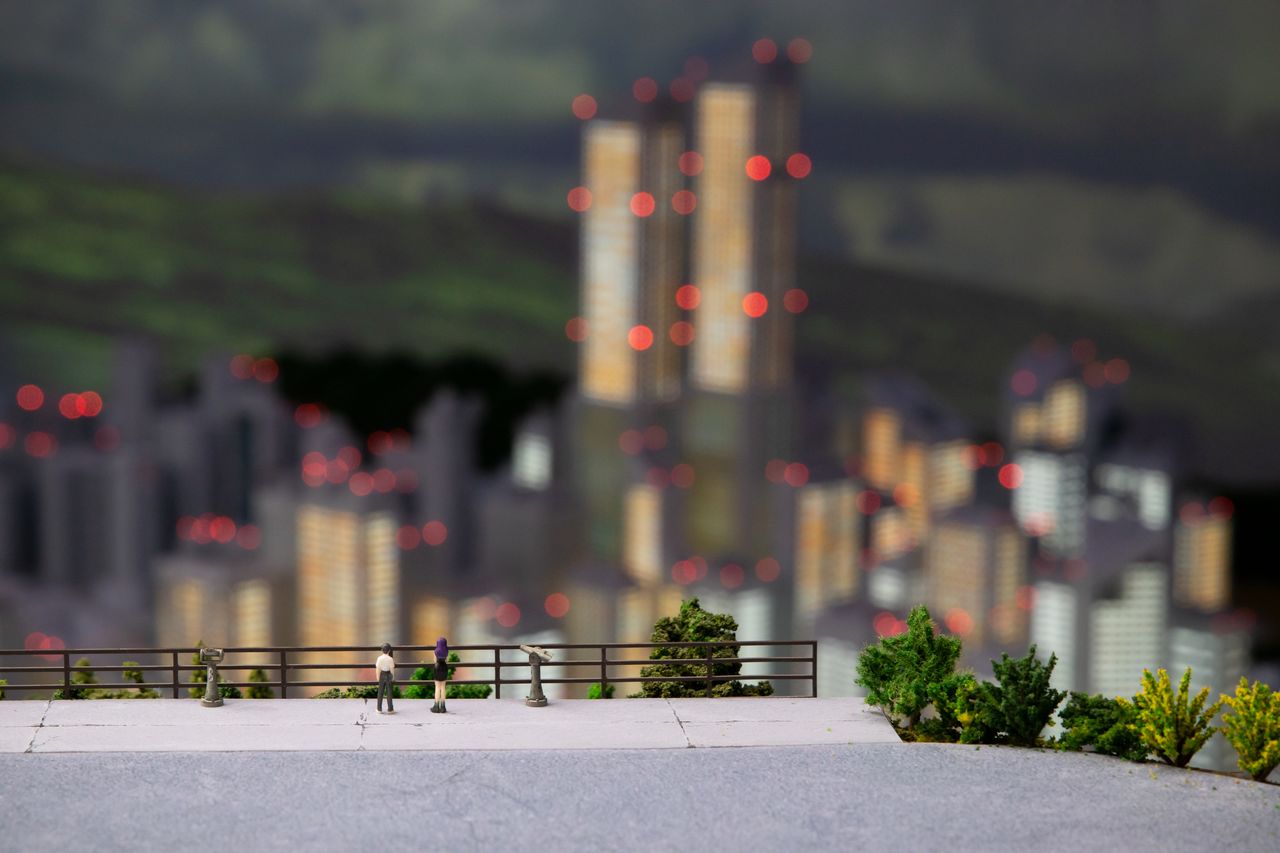 The famous scene where Ikari Shinji and Katsuragi Misato gaze down upon Tokyo-III from the slopes of Mount Kintoki. What Evangelion fan would not want a personalized figure included in this scene? (© Khara)