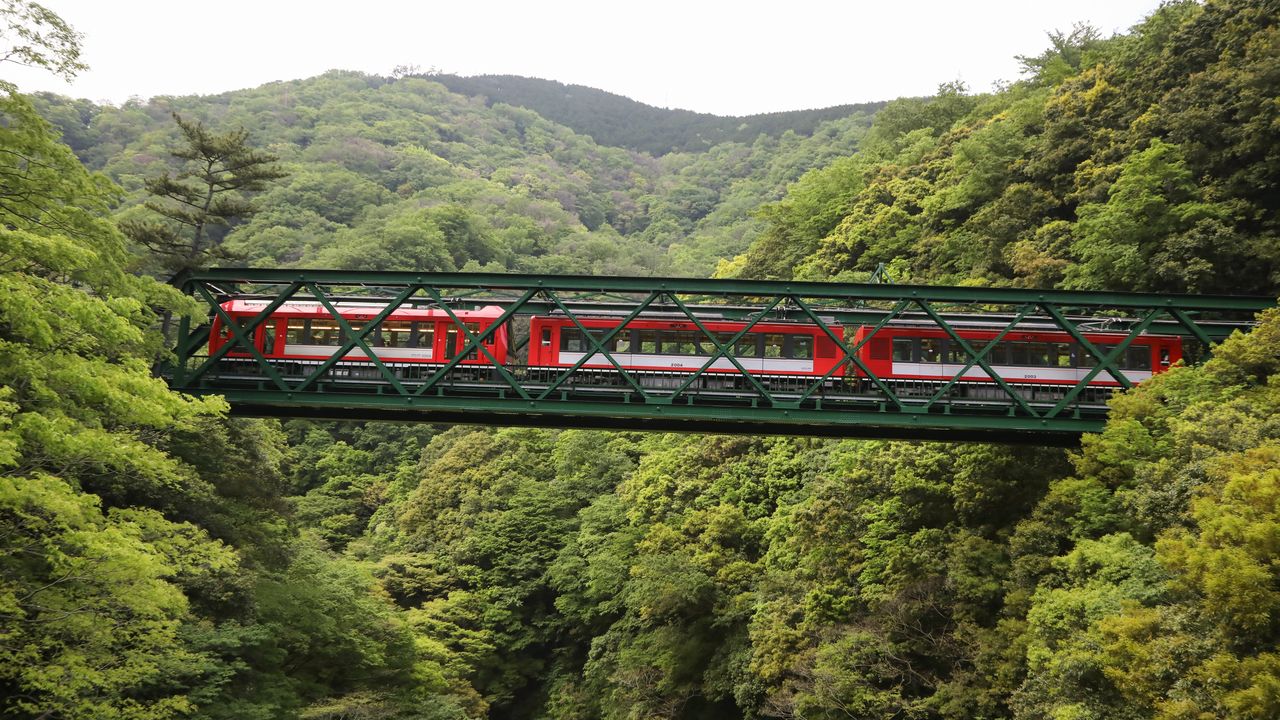 The Hakone Tozan Railway is back after being out-of-service for over nine months. In mid-October 2019, torrential rain from Typhoon Hagibis caused landslides that blocked multiple sections of the track and washed away some portions entirely. The section from Hakone Yumoto to Gōra Stations suffered the most damage and operations had to be suspended along the entire stretch. The magnitude of the destruction led some locals to wonder if the line would have to be abandoned. 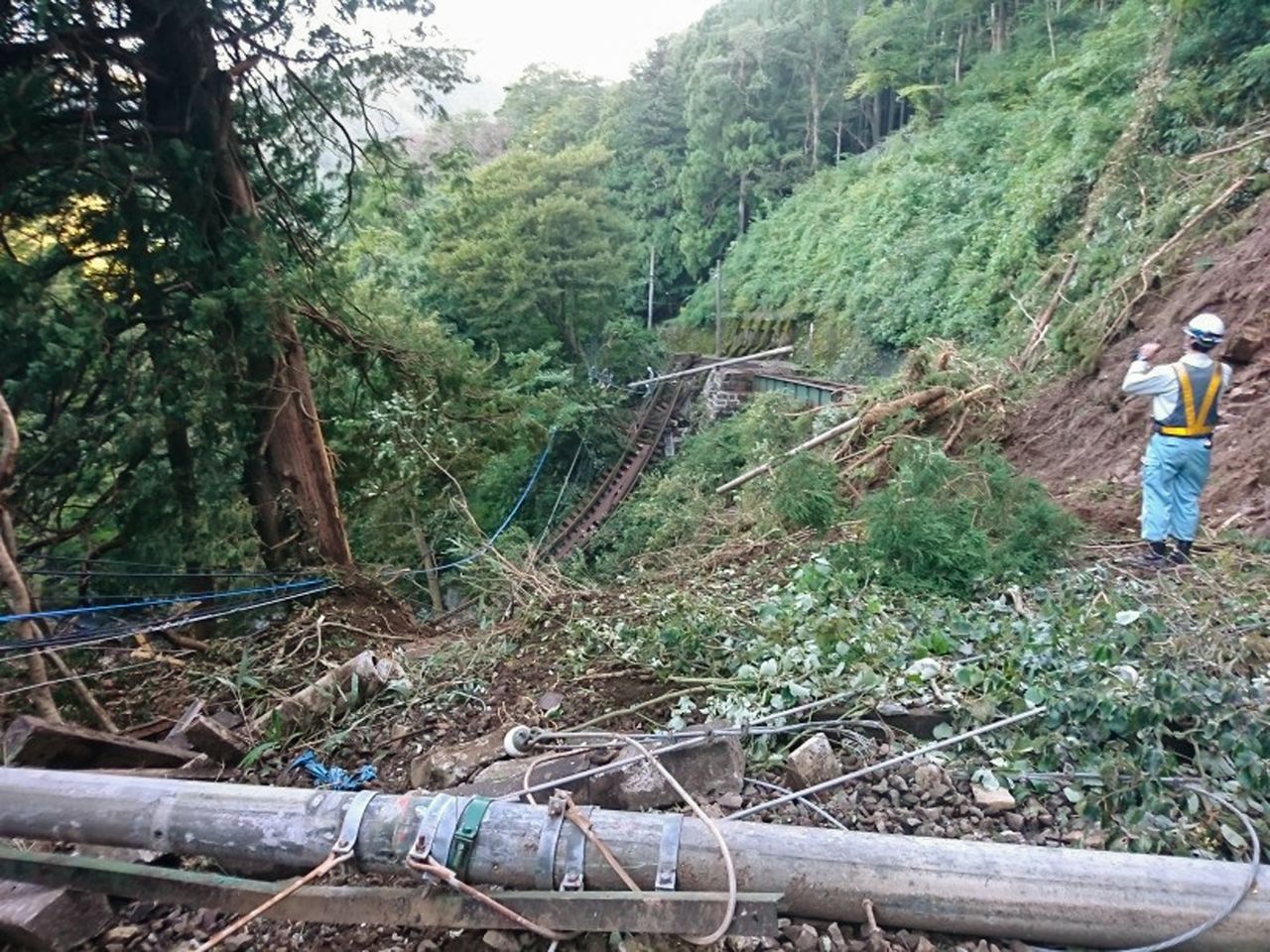 Landslides swept away much of the track between Miyanoshita and Kowakidani Stations, as shown in this photo taken on October 13, 2019. (Photo courtesy of Hakone Tozan Railway; © Jiji.)

The railway operator initially hoped to restore services by autumn 2020, itself a tall order, but round-the-clock reconstruction work enabled the line to reopen in time for the summer holidays. Test runs were progressively held on each section, with route-long tests conducted from July 9. An employee at Gōra Station expressed delight at the reopening: “It’s the first time in so long for the train to run through some sections—even the drivers are nervous and excited. They’ve always been committed to safe driving, but now even more so, as they welcome back passengers.”

Operations resumed along the entire Hakone Tozan Railway line on July 23, the national holiday Marine Day, exactly one year before the opening of the rescheduled Tokyo Olympic and Paralympic Games. 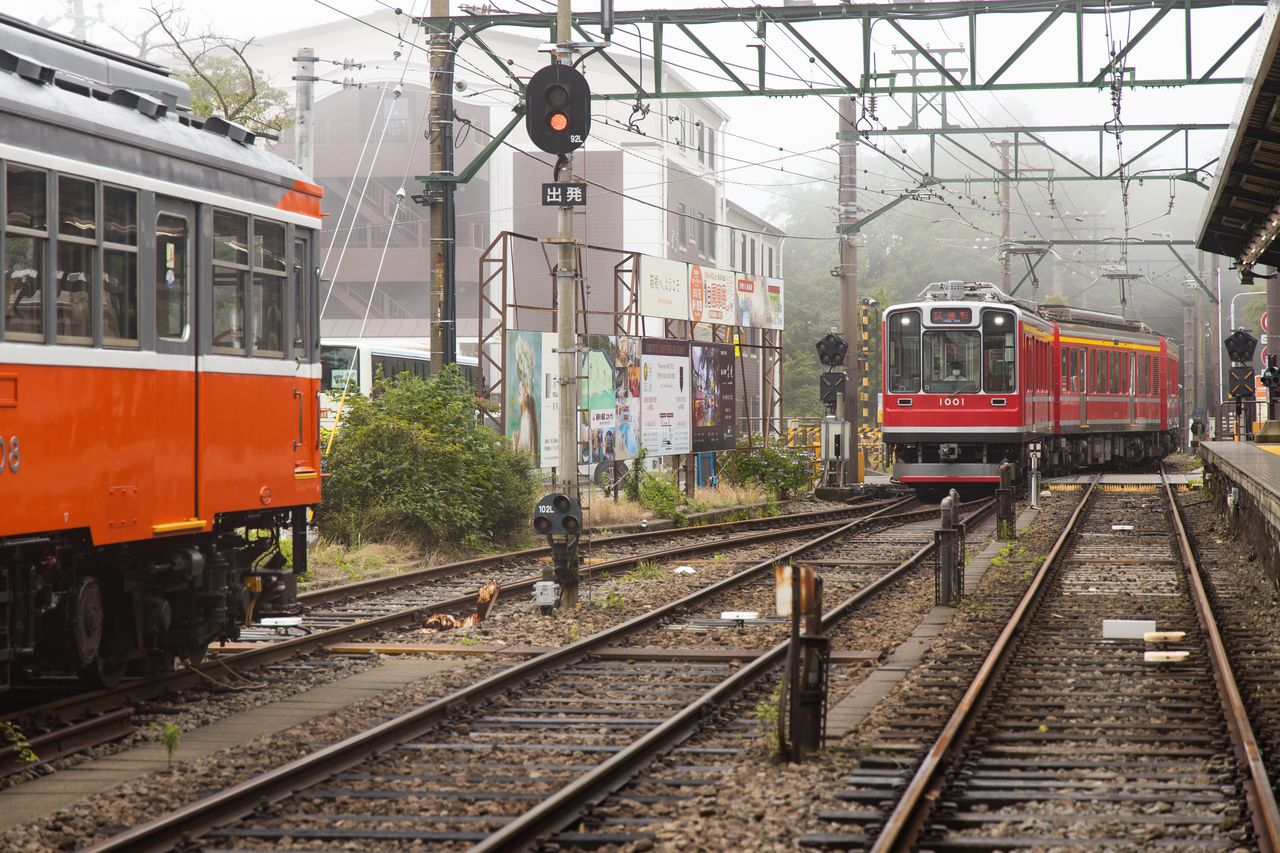 Views from the Train are a Tourist Drawcard

Hakone Tozan Railway operates the 15-kilometer railway from Odawara to Gōra, Stations and the Hakone Tozan Cable Car that continues to Sōunzan Station. Since 2006, Odakyū Electric Railway trains, including the limited express Romancecar, have run the stretch from Odawara to Hakone Yumoto Stations, and Hakone Tozan Railway carriages now only run between Hakone Yumoto and Gōra Stations. The train is a key mode of transport for discovering the Hakone area, providing access to tourist facilities like art galleries as well as hotels, hot springs, and ryokan (traditional inns).

The railway climbs Hakone’s steep mountains and attracts visitors year-round with stunning views of the surrounding landscape. It passes through lush forest, popular for the colors of autumn and snow scenes in winter. Hydrangeas that line the tracks bloom in the rainy season, from mid-June through July. The so-called hydrangea train operates during this period, showcasing these beautiful flowers, lovingly tended by railway staff. The route is lit-up at night during the season. 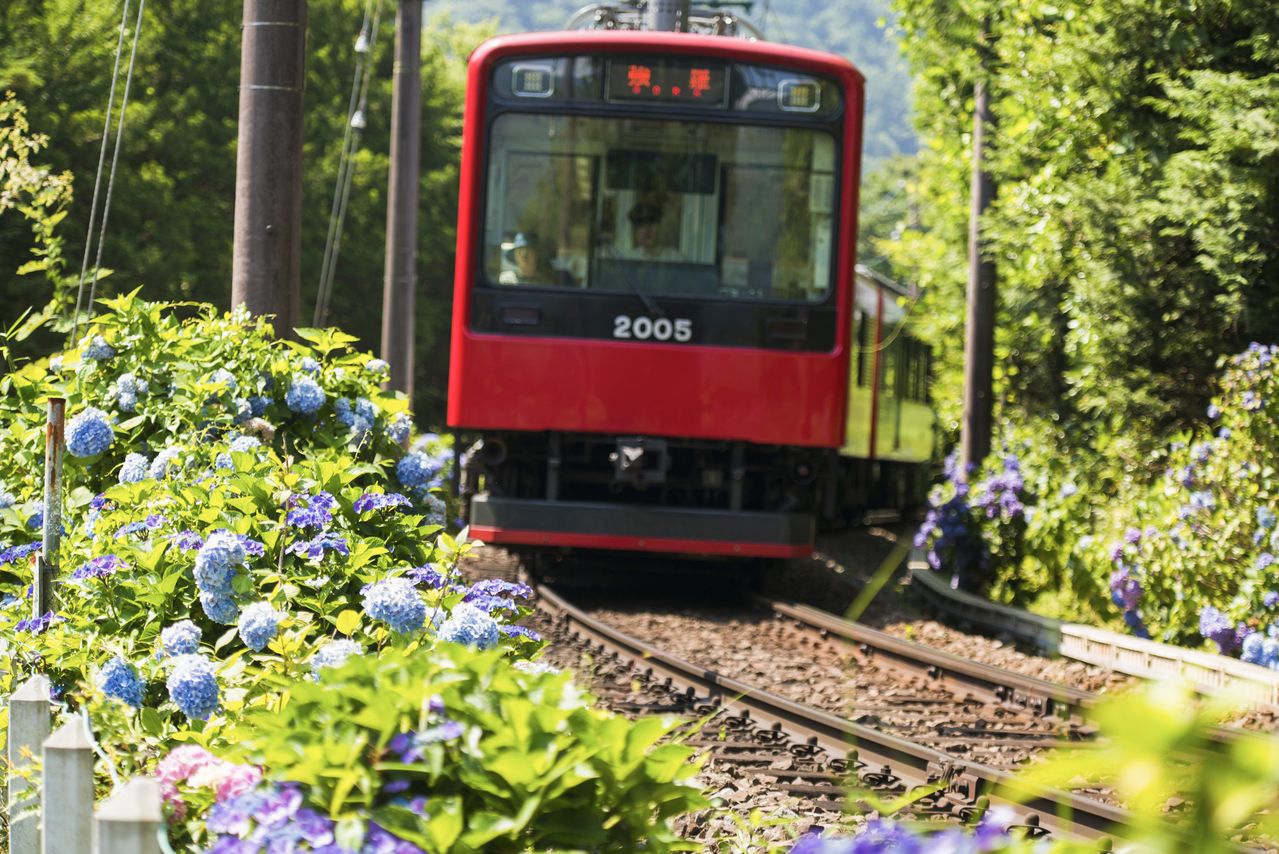 The Hakone Tozan Railway passing by hydrangea in bloom in July 2017. (© Kodera Kei)

This year marks the sixtieth anniversary of Hakone’s “golden course,” a tourist route that loops around the area by bus, train, cable car, and boat. Starting at Hakone Yumoto Station, visitors take the Tozan Railway and Cable Car to Sōunzan Station before changing to the Hakone Ropeway for the trip to Ōwakudani and then Tōgendai on the shore of Lake Ashi. Boarding boats decorated like pirate ships, passengers cross the water to Hakone-machi, where they change to Hakone Tozan buses for the final leg back to Hakone Yumoto.

The buses replaced the Hakone Tozan Railway while it was out of operation, but locals and tourists alike sorely missed the sight of the trains. These woes were compounded by the COVID-19 pandemic, which has left Hakone almost deserted. 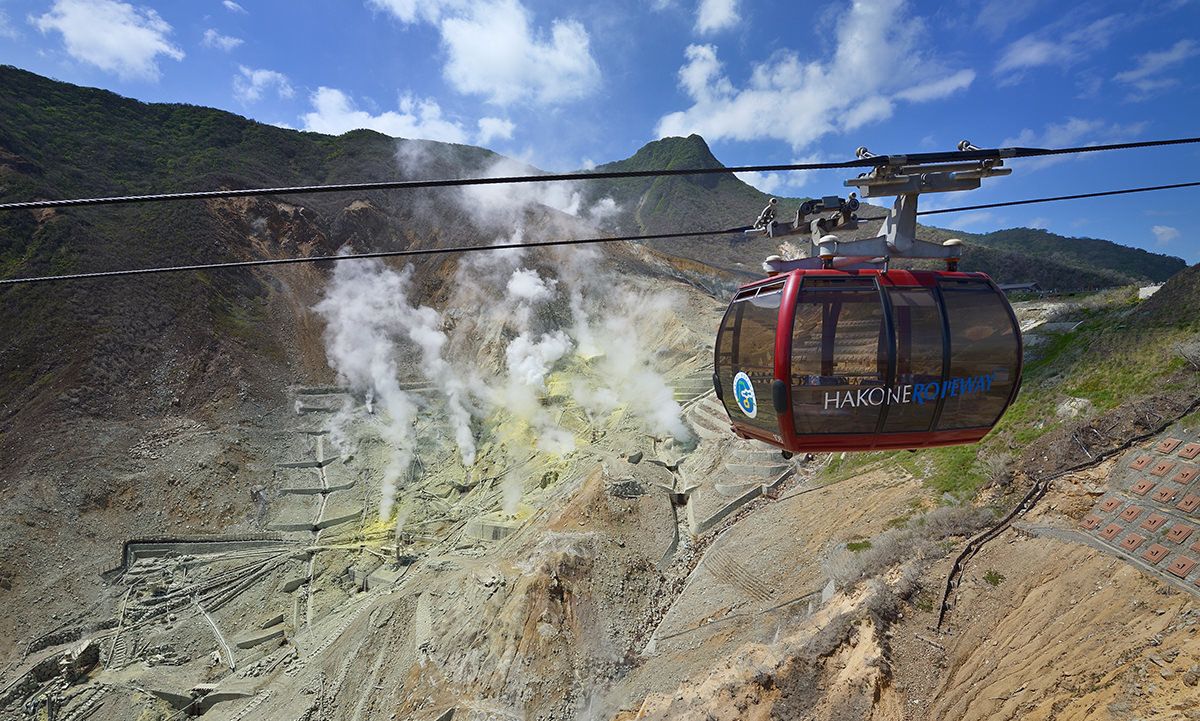 The Hakone Ropeway, seen here passing above Ōwakudani, is a popular attraction with visitors to the area. (Courtesy of Odakyū Agency)

Operators of Hakone Sightseeing Cruises are hopeful the reopening of the railway will lure more tourists to the area. Vessels like the Queen Ashinoko, a “pirate ship” created by industrial designer Mitooka Eiji, once ferried hordes of passengers across Lake Ashi, but have seen ridership fall dramatically.

The Queen Ashinoko displays its goddess figurehead as it approaches the docks. 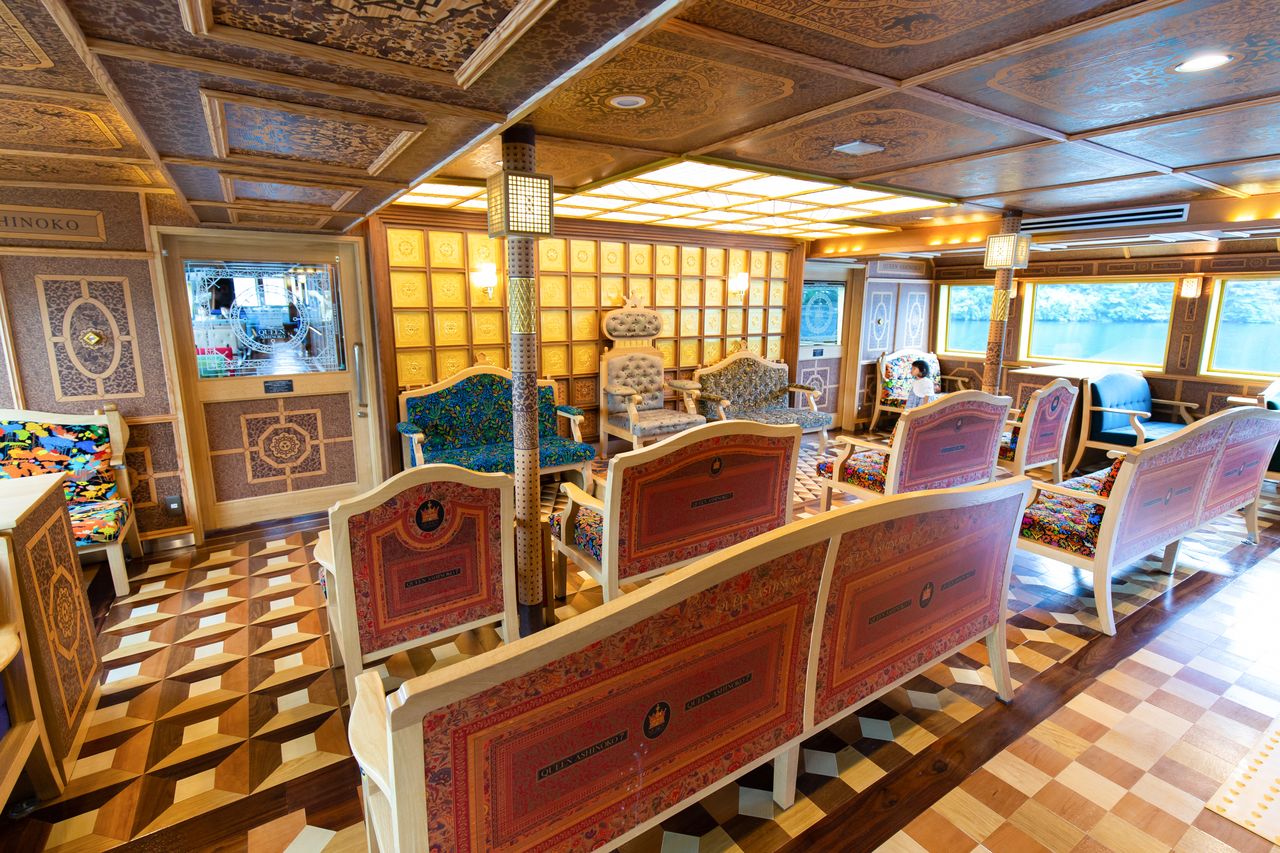 The first class cabin of the Queen Ashinoko boasts plush sofas and decorative woodwork, including a floor incorporating the traditional mosaic pattern of Hakone yosegi zaiku and intricately patterned ceilings.

In May 2019, just after the ship came into service, there was an increase in volcanic activity at Ōwakudani and entry restrictions were imposed, putting the Hakone Ropeway out of operation from mid-May to late October. Then, just after the volcanic alert level was lowered in October, Typhoon Hagibis struck Japan. Rain increased the water level of Lake Ashi, damaging the Hakone-machi dock and forcing cruises to suspend operations for a week. More critically, it knocked the Hakone Tozan Railway out of service. As around half of the cruise ship’s passengers are traveling the Golden Course using the Hakone Freepass discount excursion ticket, this was a heavy blow to operations.

The Hakone Freepass provides unlimited travel on a range of transportation around the area along with discounts at a host of tourist facilities, including art galleries and hot springs. The pass can be combined with a discounted round-trip ticket on the Odakyū Line from Shinjuku and other stations, making the train an inexpensive and convenient way to visit Hakone.

During April and May this year, COVID-19 caused cruise sales to drop as much as 80% compared with ordinary years. In spite of this, fans of Mitooka still came to catch the Queen Ashinoko and were rewarded for their efforts. Shibayama Nanako, responsible for sales planning for Hakone Sightseeing Cruise, hopes that the re-opening of the railway will rejuvenate tourism in Hakone and gain greater attention for the Queen Ashinoko. 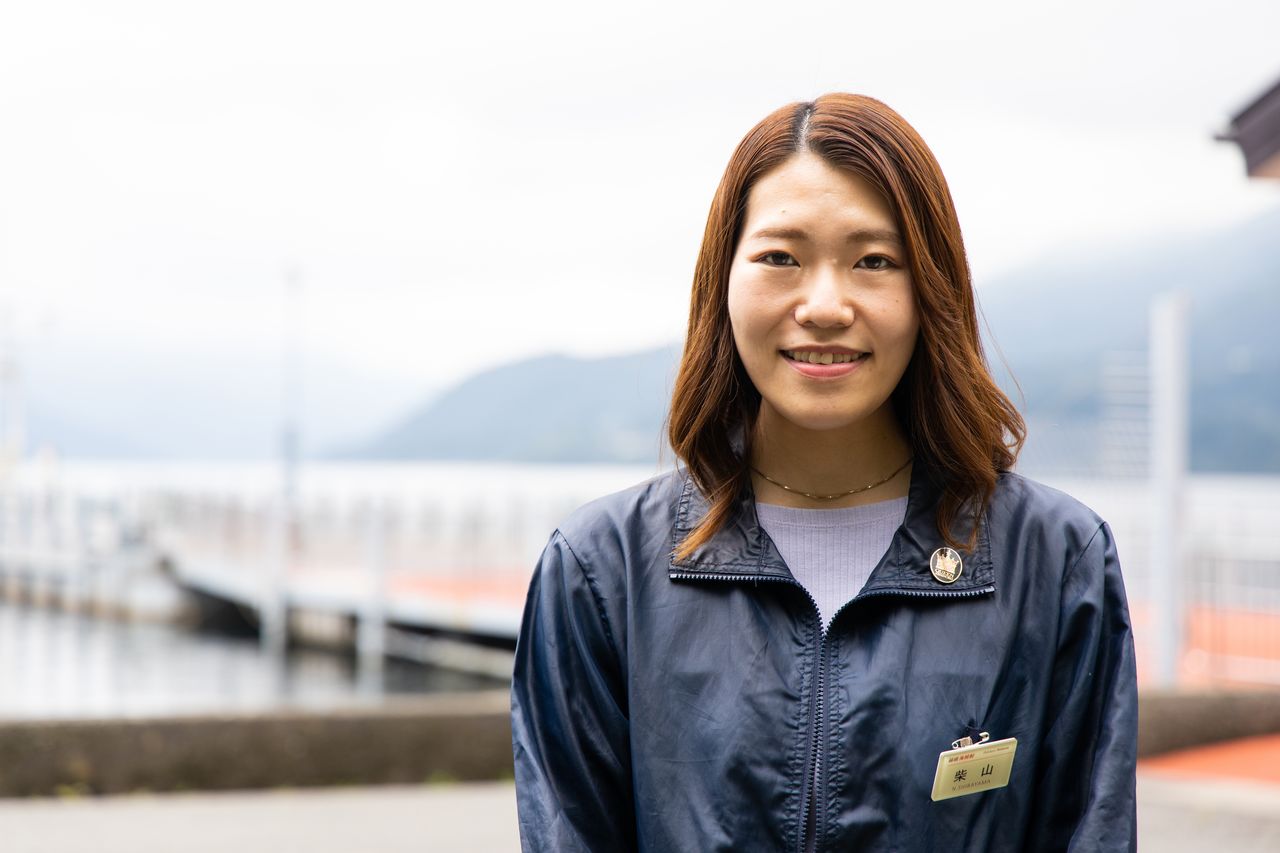 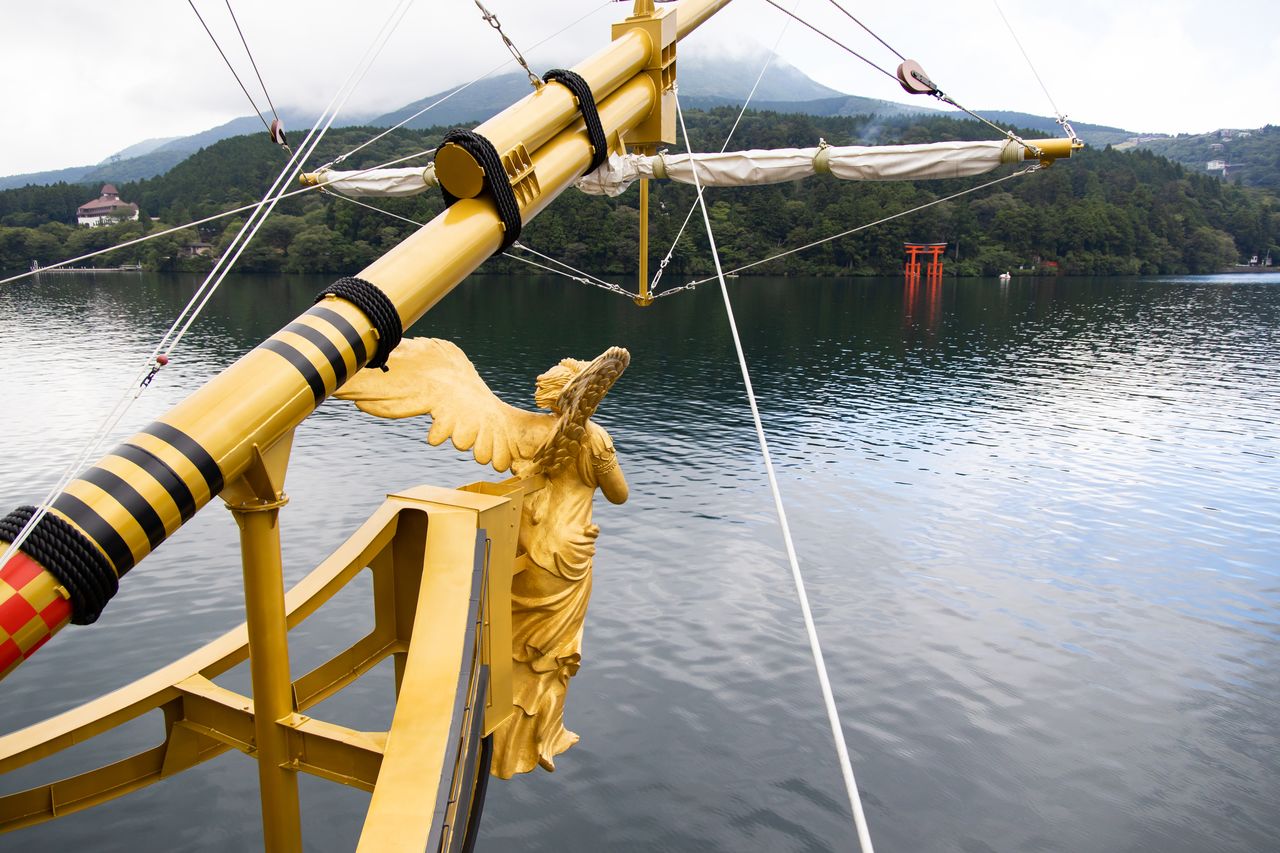 The Queen Ashinoko glides across the lake surface. The popular ”peace gate” at Hakone Shrine can be seen in the distance.

On July 9, a new tourist facility, Cu-mo Hakone, opened within Sōunzan Station and is set to become a new hot spot with the resumption of train service. The name plays on the word kumo, Japanese for “cloud,” the kanji for which is one of three characters making up the name Sōunzan.

Sōunzan is the transit point between the cable car and ropeway. The station underwent a major revamp that has created a welcoming space defined by wood undertones, with improved barrier-free access, multi-purpose restrooms, and an infant nursing room. In the case of a volcanic eruption in the Ōwakudani area, the facility is also equipped to act as a temporary shelter for around 300 people.

The highlights of Cu-mo Hakone are the foot bath on the second-floor viewing deck and the souvenir shop. The deck offers an unobscured view of Myōjōgatake, known for the fire lit on the mountainside in summer in the shape of the kanji dai (meaning “big”). On a clear day, visitors can see as far as Sagami Bay. 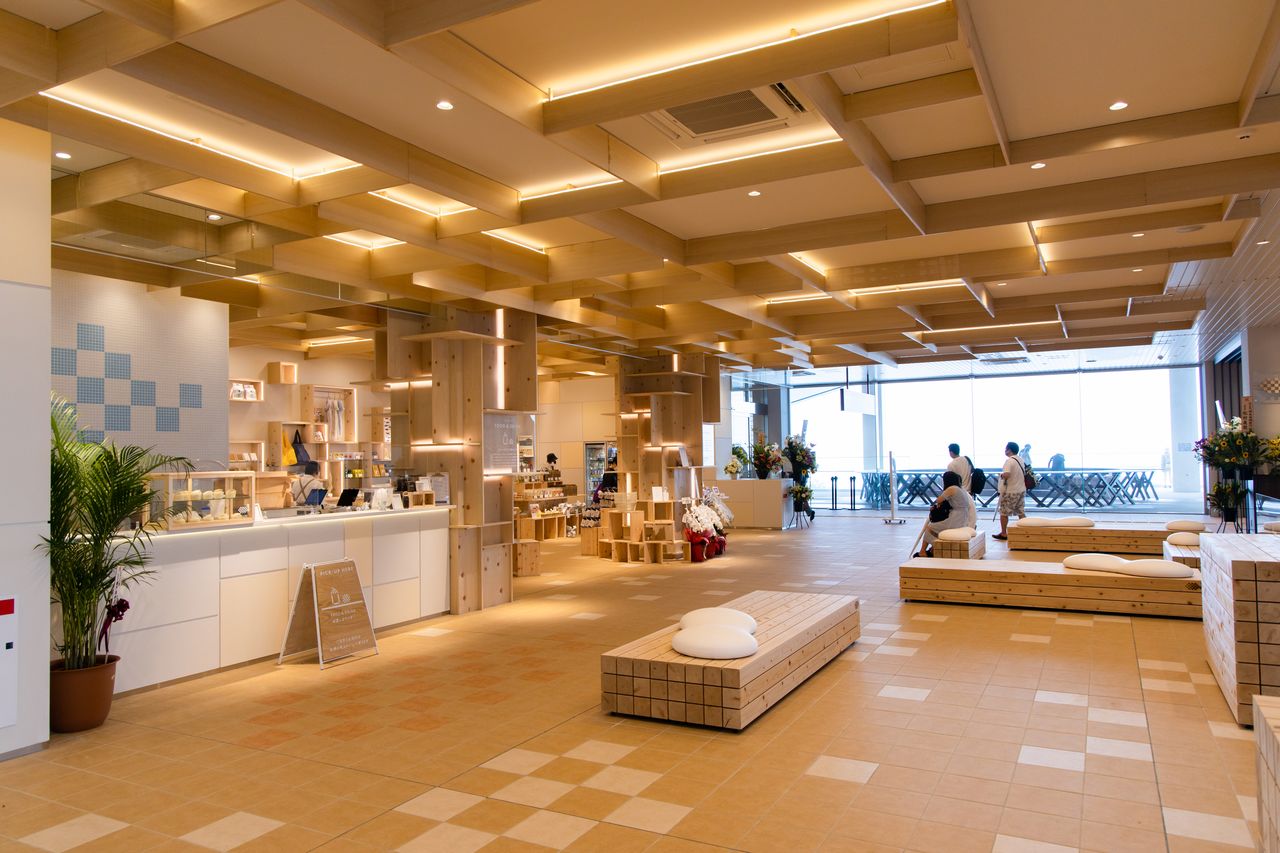 Cu-mo Hakone, on the second floor at Sōunzan Station. The viewing deck is beyond the souvenir boutique. 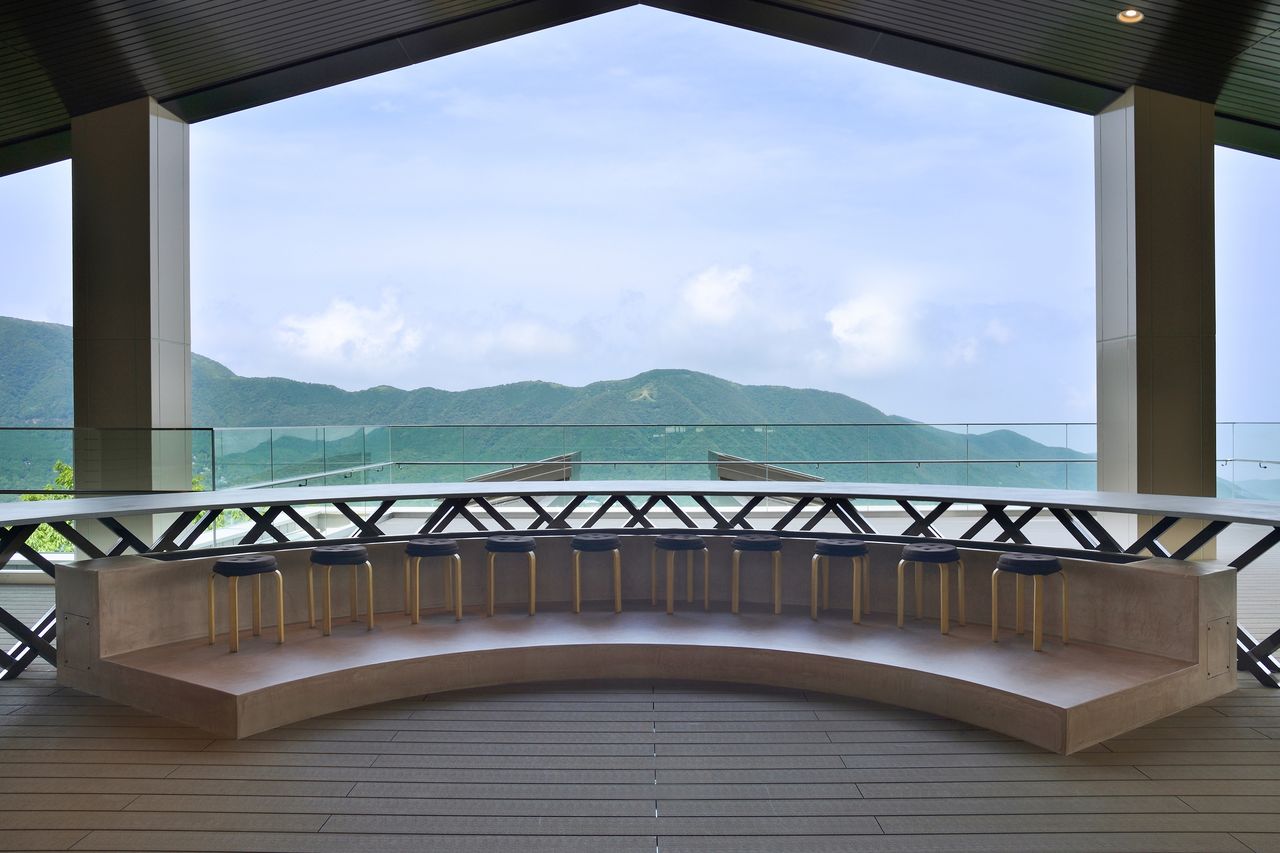 The character dai (大) is visible near the peak of Myōjōgatake directly in front of the Cu-mo Hakone viewing deck. (Courtesy of Odakyū Agency) 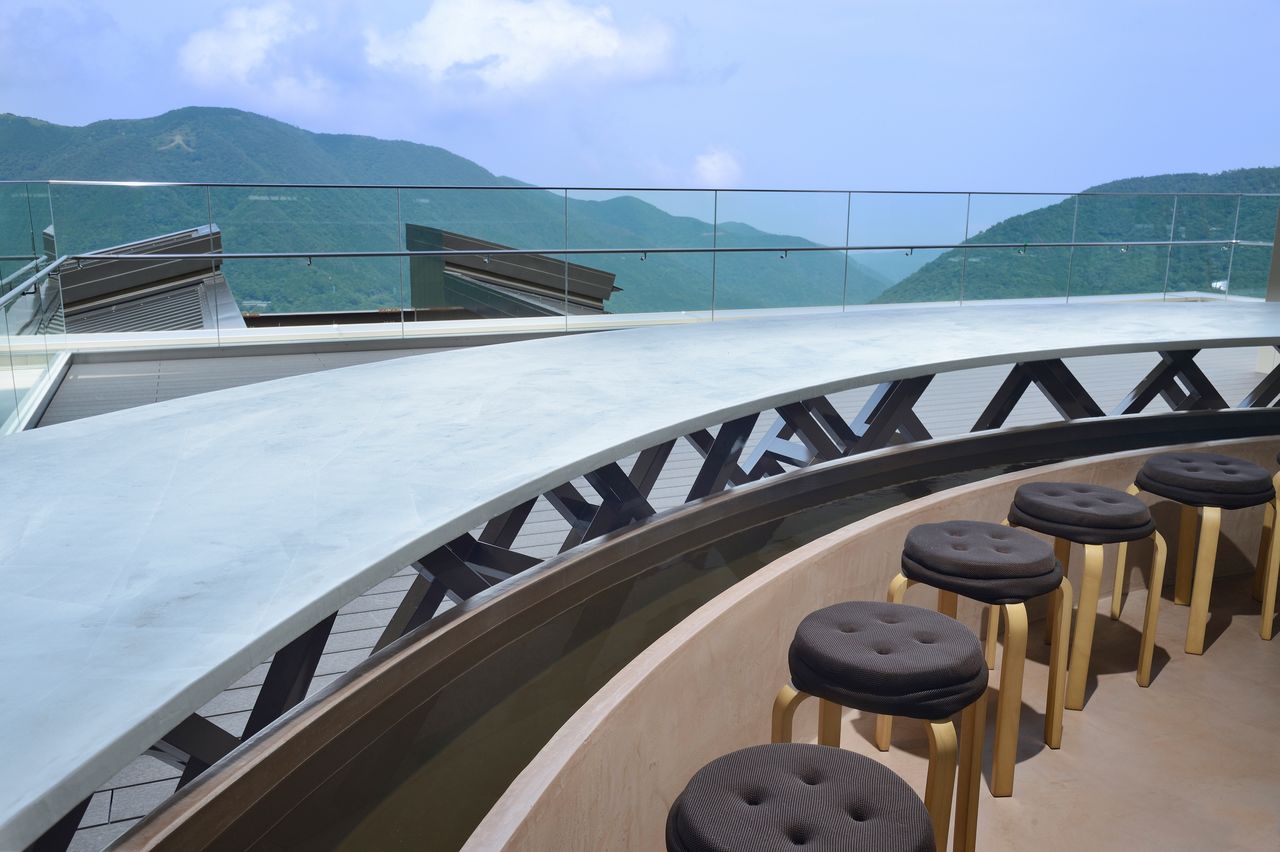 Visitors can soak their feet in hot spring water as they savor the view. (Courtesy of Odakyū Agency)

Shop manager Tanaka Rina noted that opening the facility during the rainy season meant there were few customers initially, but that the first sunny weekend brought a constant stream of guests. She anticipated a recovery in visitor numbers with the relaunch of railway services. 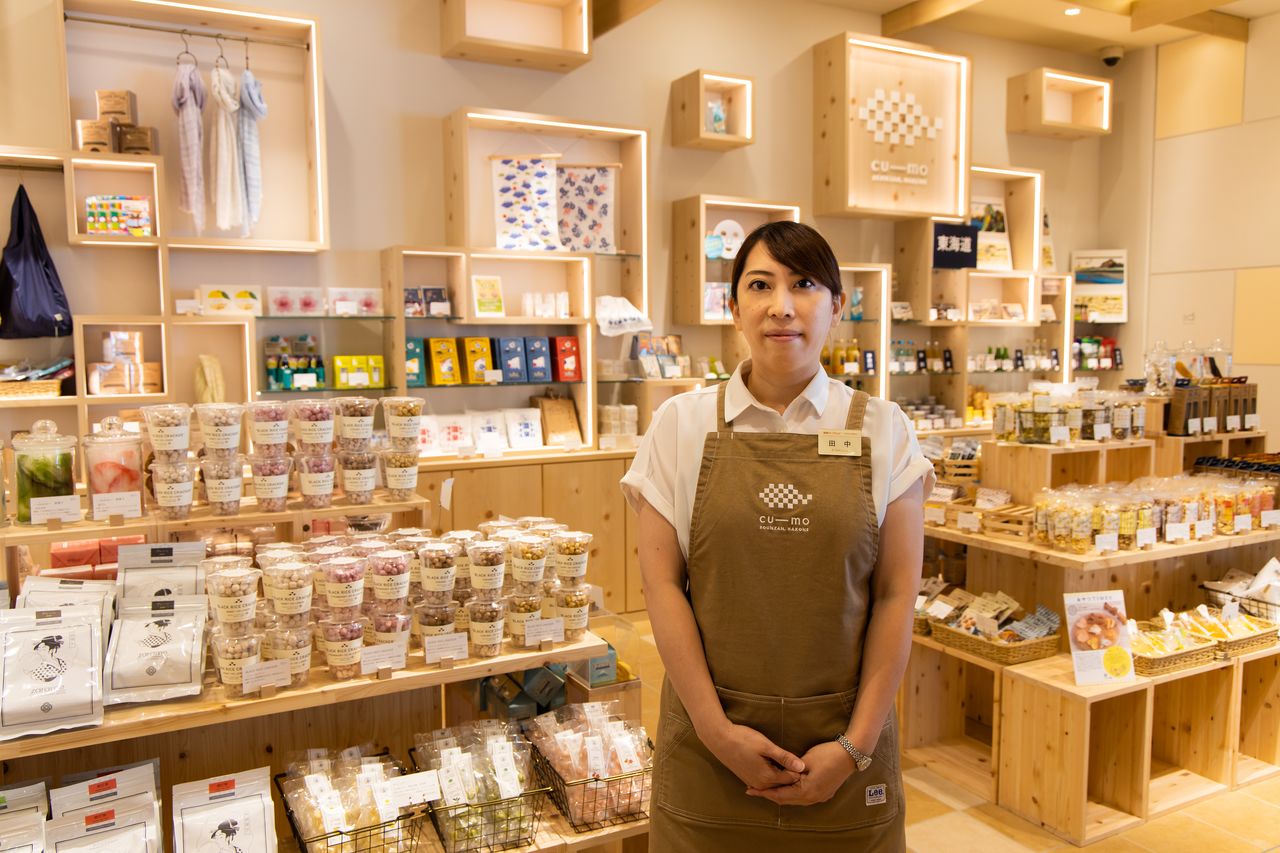 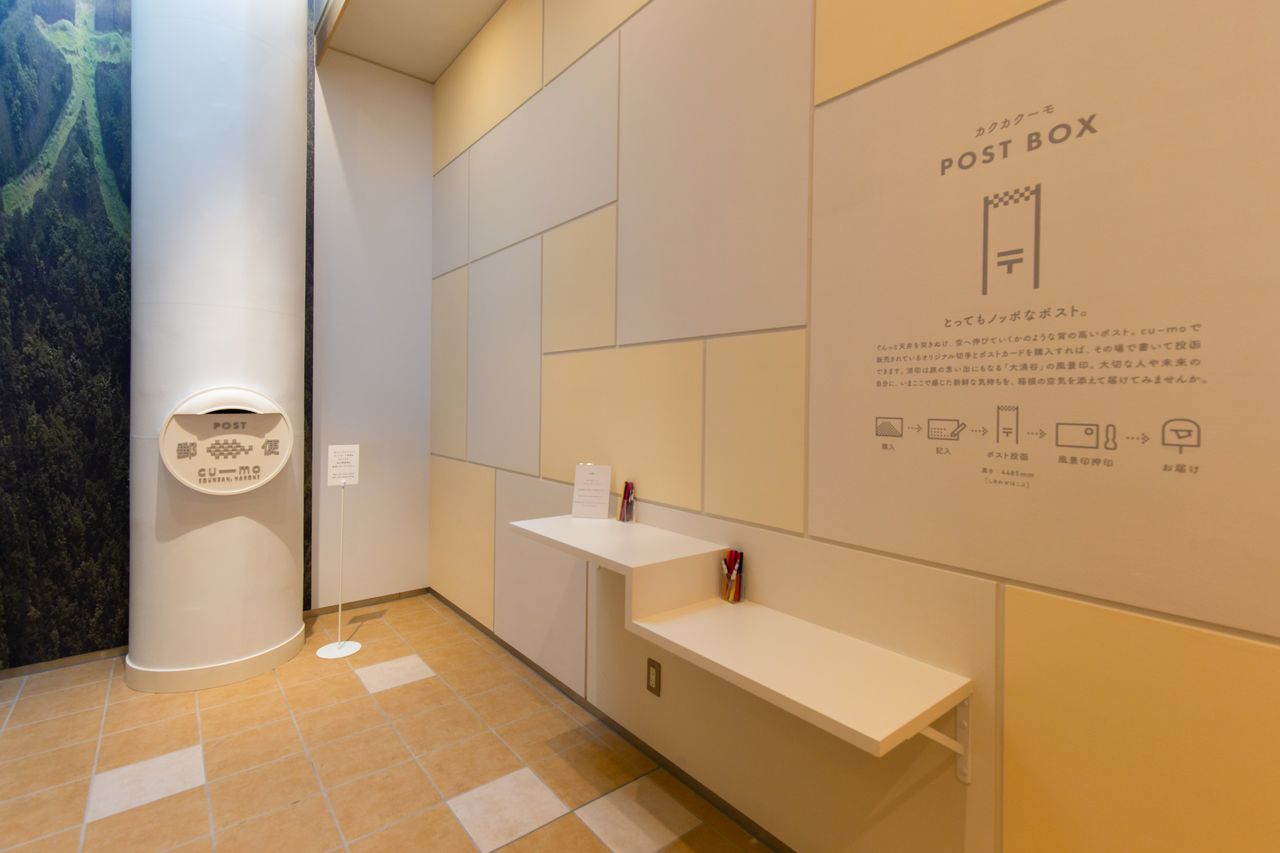 Visitors can send postcards of their trip from a towering post box. 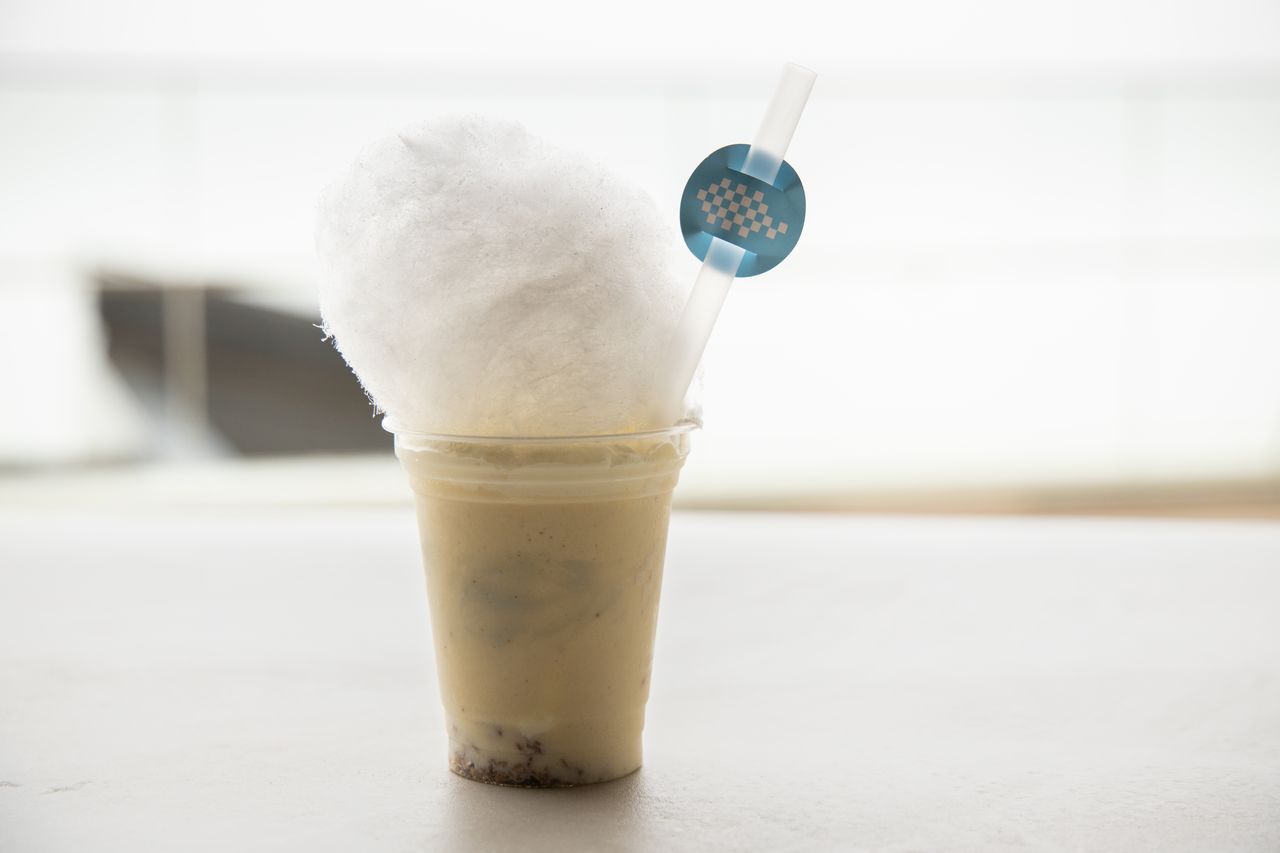 Banana-flavored Nuvel smoothie is sure to gain attention on social media.

Evangelion × Hakone 2020, a collaborative initiative that coincides with the latest release in the Evangelion film series, is running until September 30. Locations along the golden course immerse fans in the world of Evangelion. 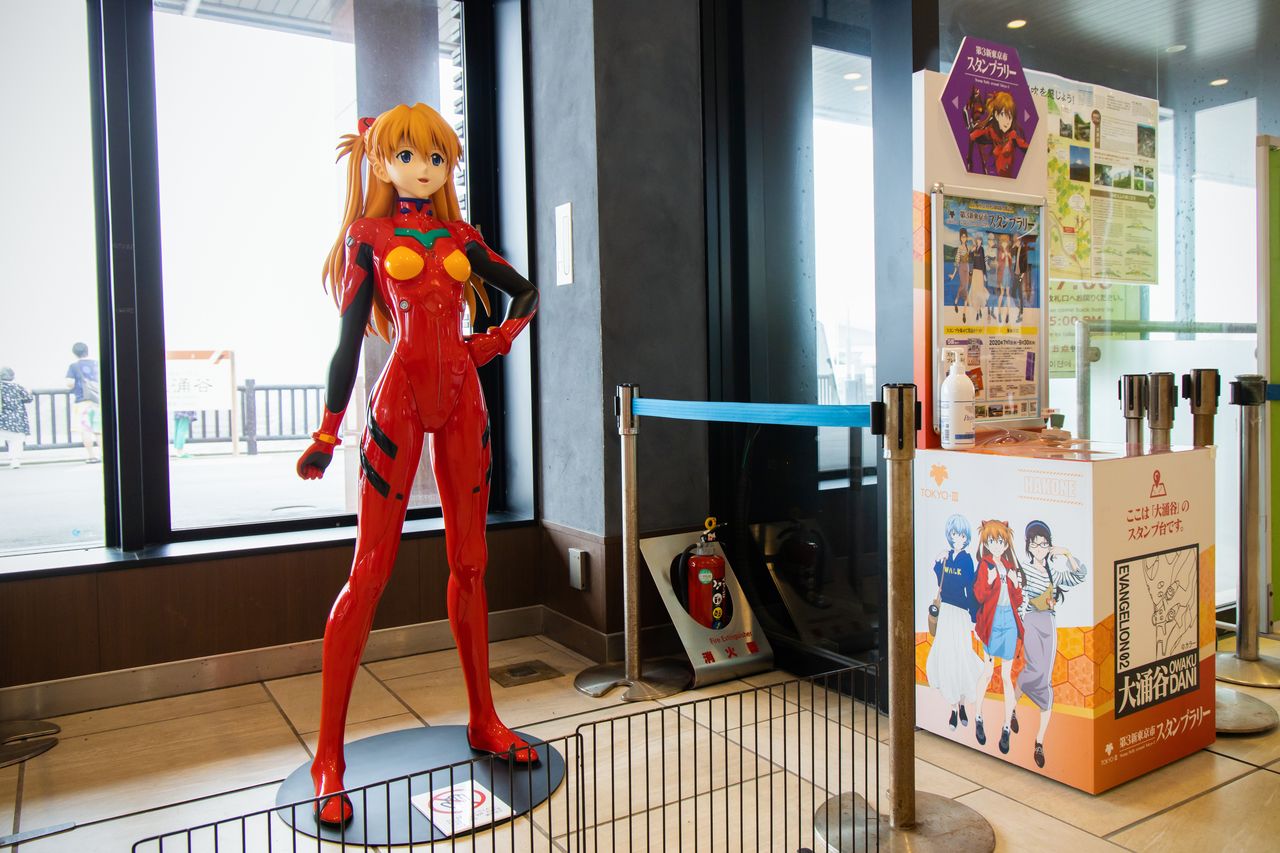 (Originally published in Japanese. Reporting, text, and photos by Nippon.com. Banner photo: A train on the Hakone Tozan Railway crosses the Deyama Bridge during a test run on May 11, 2020. © Jiji.)