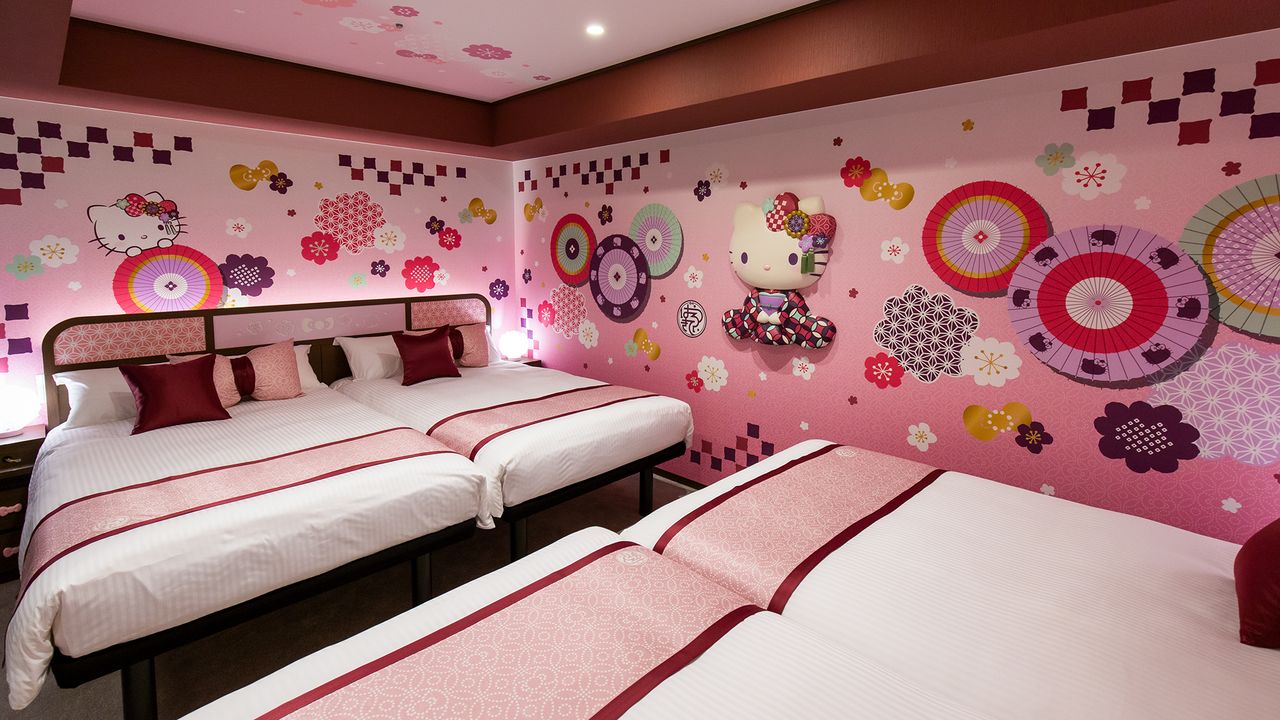 A Blend of Traditional Beauty and Pop Culture

The newly opened Asakusa Tōbu Hotel in Tokyo offer fans of Sanrio’s Hello Kitty a dream come true: a night spent in a room lavishly adorned with images of the iconic figure. Located just a short walk from Tōbu Asakusa Station and the giant red lantern at the Kaminarimon of temple Sensōji, the hotel has six “Kitty-chan” guestrooms that combine the cuteness of the cat-like character with the traditional esthetic of the historic neighborhood. 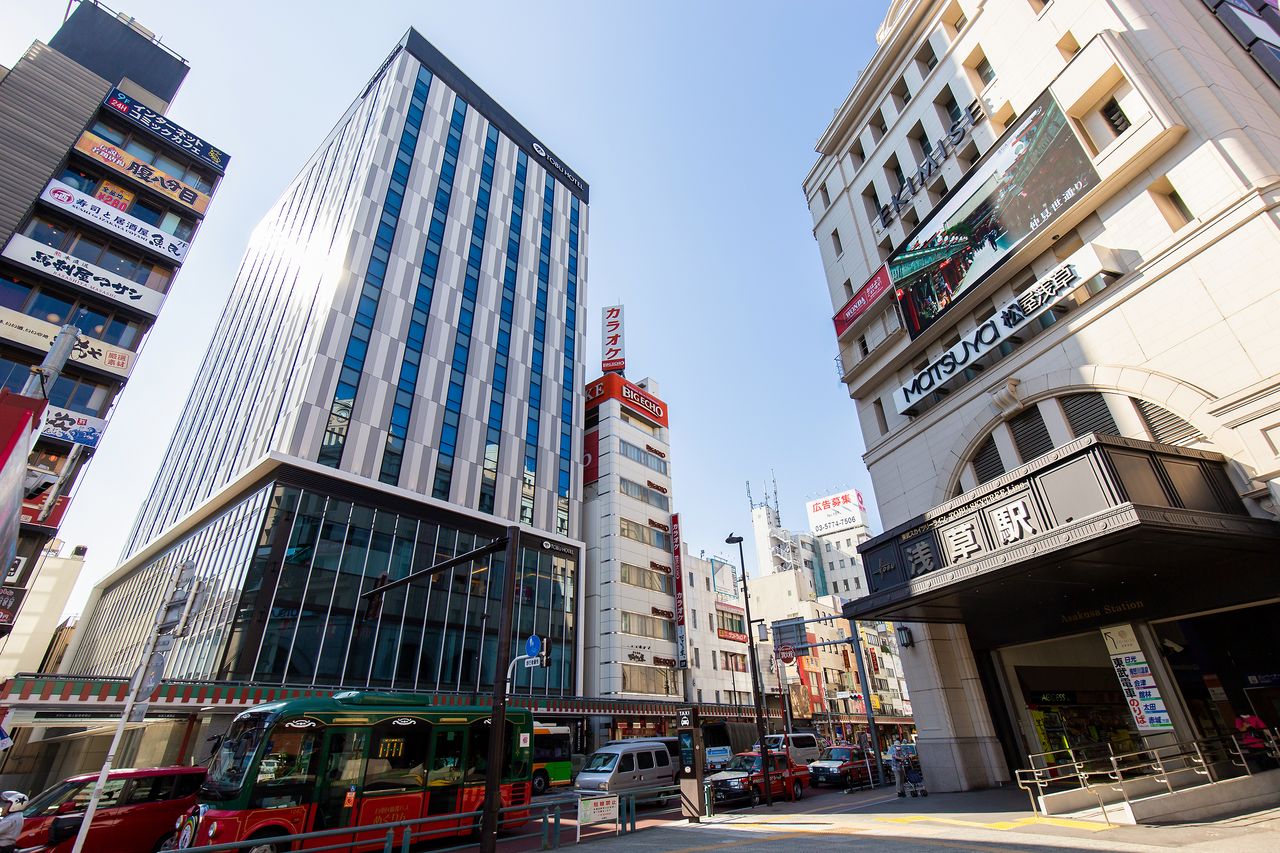 The Asakusa Tōbu Hotel (left) stands across the street from Asakusa Station on the Tōbu Skytree Line.

The Asakusa Tōbu Hotel’s six Hello Kitty guestrooms are decorated in one of two themes: Sakura Tennyo or Wa-Modern. Each room sleeps up to four guests.

The Sakura Tennyo rooms are awash in pastel pink and feature areas with pink-tinted tatami matting trimmed with ribbon-decorated borders. Visitors are welcomed by a Hello Kitty dressed as a tennyo, an angel-like being from Japanese mythology. Cherry blossom petals adorn the walls and Hello Kitty’s trademark bow decorates the bedding. The Hello Kitty theme extends to the bath and toilets, and the character is even found on the hotel stationery and room number plates on doors. 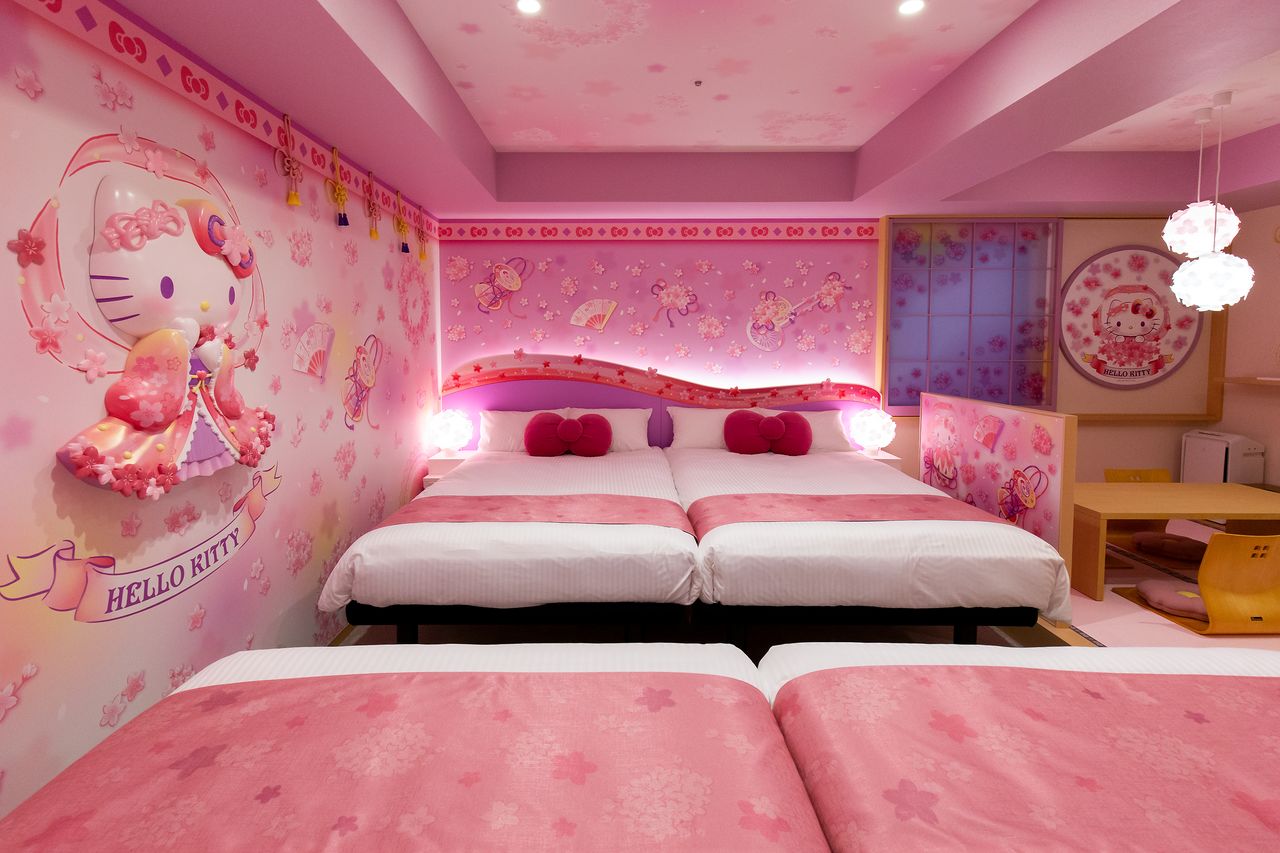 Cuteness abounds in the Sakura Tennyo room. All of the Hello Kitty rooms have four beds.

The Wa-Modern rooms harken back to the late Meiji and Taishō eras at the turn of the twentieth century when Asakusa was a bustling center of Japanese culture and fashion. The walls are decorated with circles of Japanese umbrellas and traditional asanoha motifs (a hemp-leaf pattern symbolizing vitality and growth often used on children’s clothing) that blend nicely with the Hello Kitty bows and silhouettes. To match the chic atmosphere of Japanese nostalgia, the Hello Kitty logo is written in the cursive hiragana script. Furniture handles and even the room divider screens are embellished with Hello Kitty bows. Fans are certain to spend hours just taking photos of all the features. 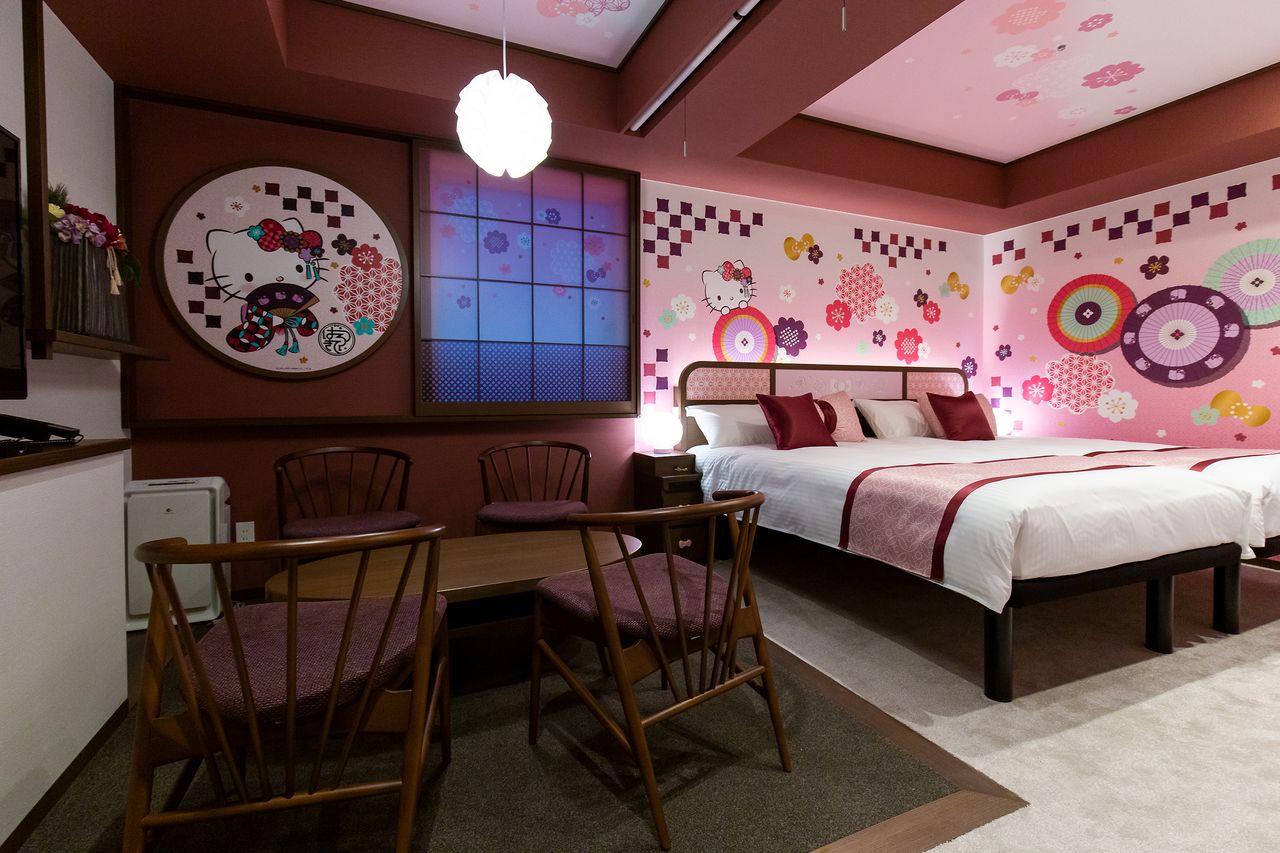 The chic Wa-Modern room is full of Hello Kitty motifs.

A Convenient Base for Sightseeing Excursions

Hotel staff say they enjoy welcoming fans of the character and recommend the Hello Kitty rooms as the perfect accommodation for families with children as well as groups of friends. While foreign visitors to Japan have declined due to the pandemic, the staff says the rooms will be waiting for overseas guests when life gets back to normal.

The cost to stay in a Hello Kitty guestroom varies by season, and the hotel offers differently priced accommodation packages.

The Asakusa Tōbu Hotel has 14 floors and a total of 253 guestrooms with views of Sensōji, the Nakamise stretch of shops leading up to the temple, and the towering Tokyo Skytree. A special breakfast service of freshly made rice balls with choice of fillings is available. Guests traveling to Nikkō, home to the Tōshōgū Shrine, need only cross the street to Asakusa Station to catch the northbound service of the Tōbu Railway. Also close by are the Tokyo Metro Ginza and Toei Asakusa subway stations for easy jaunts to Ueno, Ginza, and Shibuya. 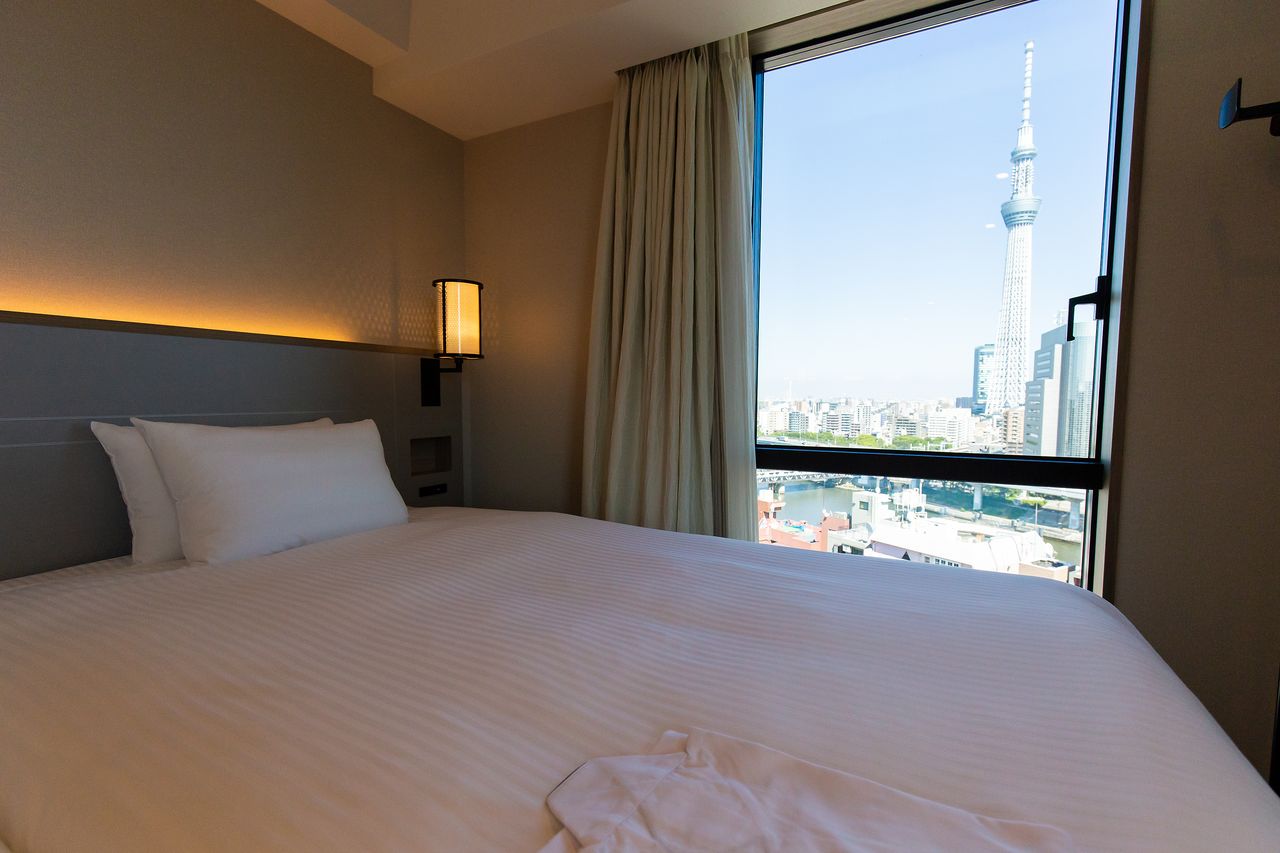 A view of the Tokyo Skytree from one of the hotel’s regular guestrooms. 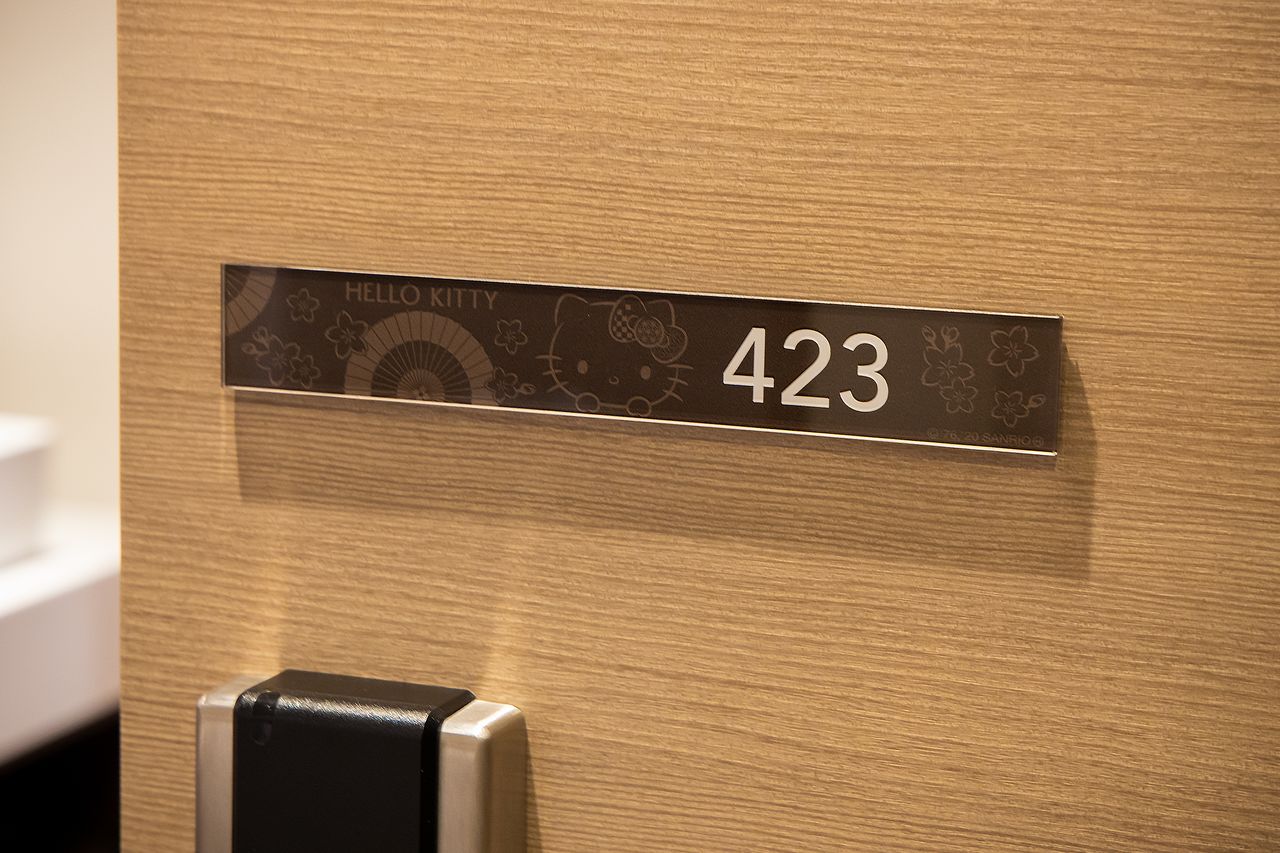 Even the number plates on rooms feature Hello Kitty. 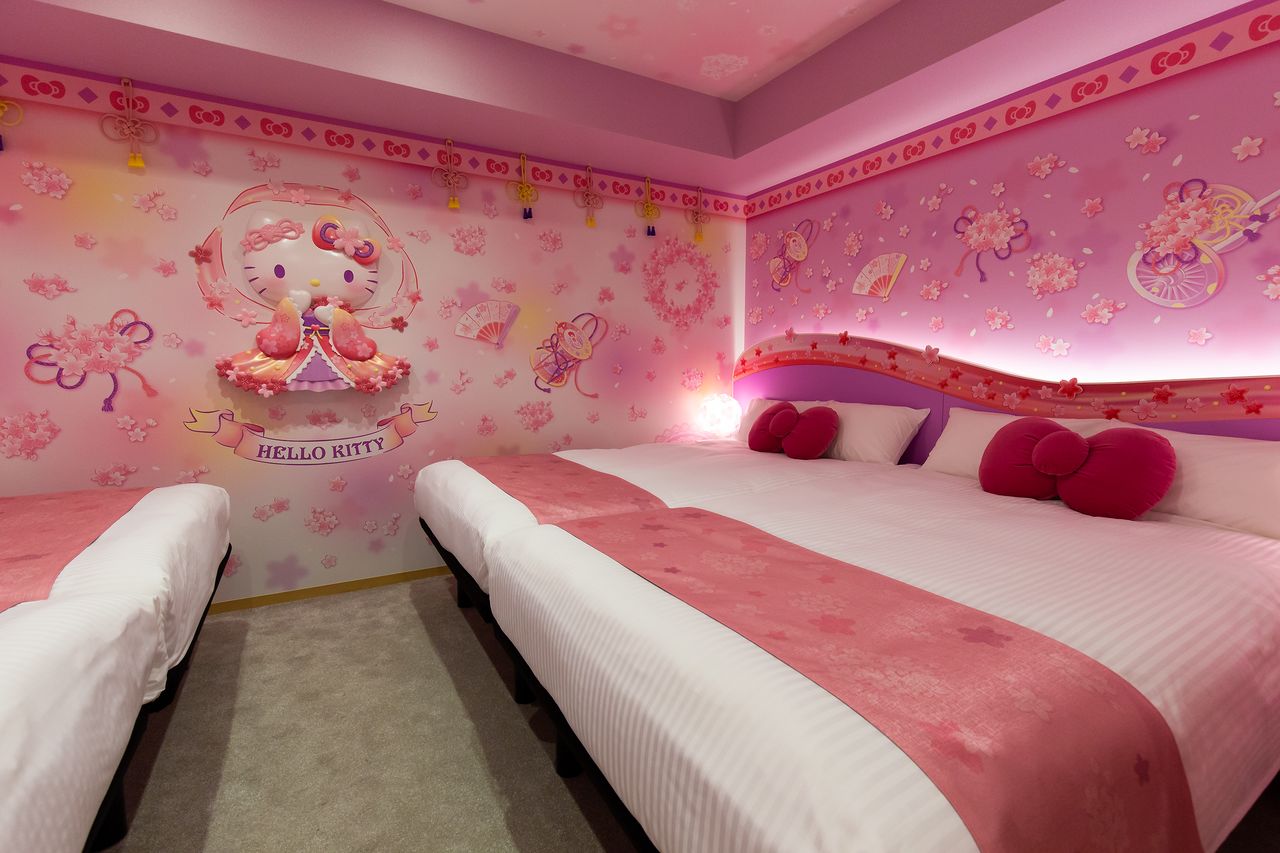 Hello Kitty covers the walls of the Sakura Tennyo room. The bed cushions are shaped like the character’s trademark bow. 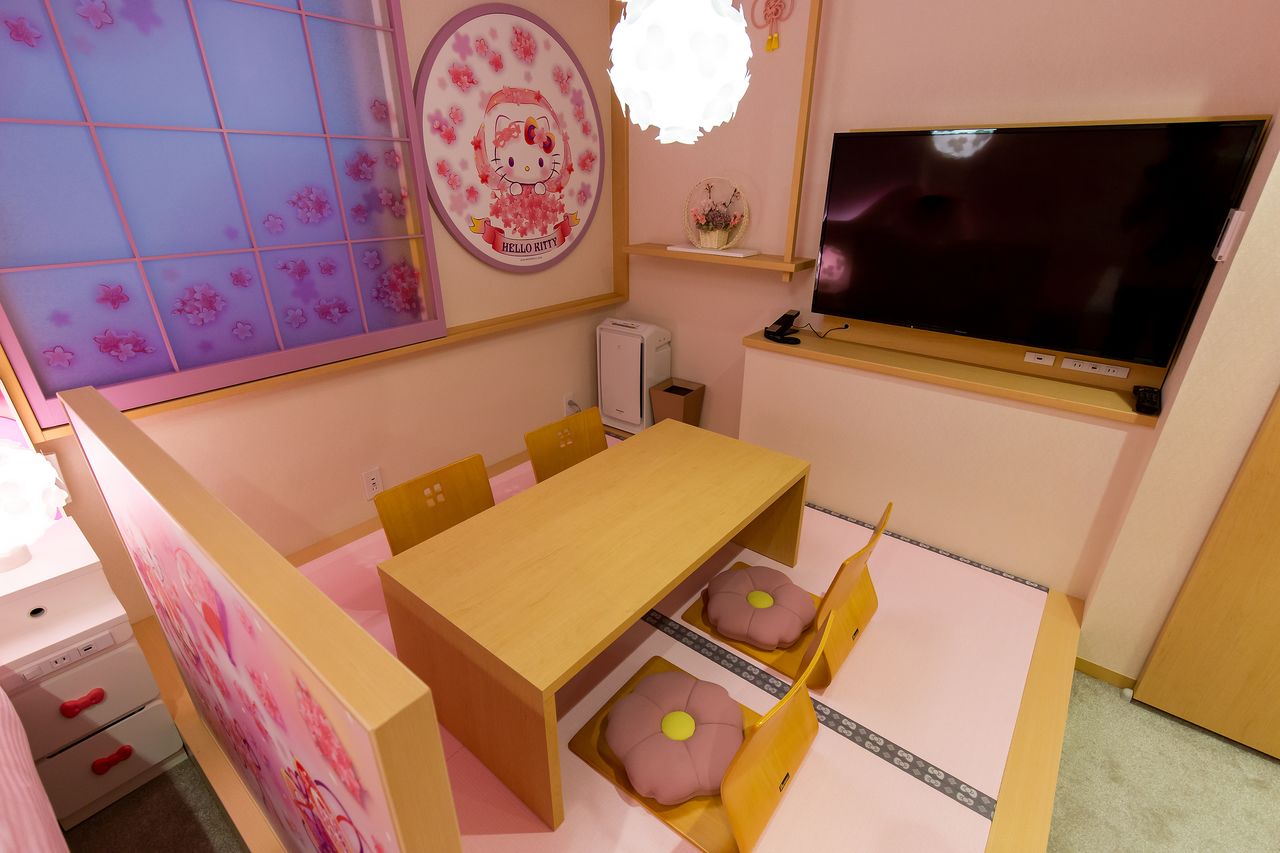 The seats in the pink tatami area have cherry blossom-shaped cushions. 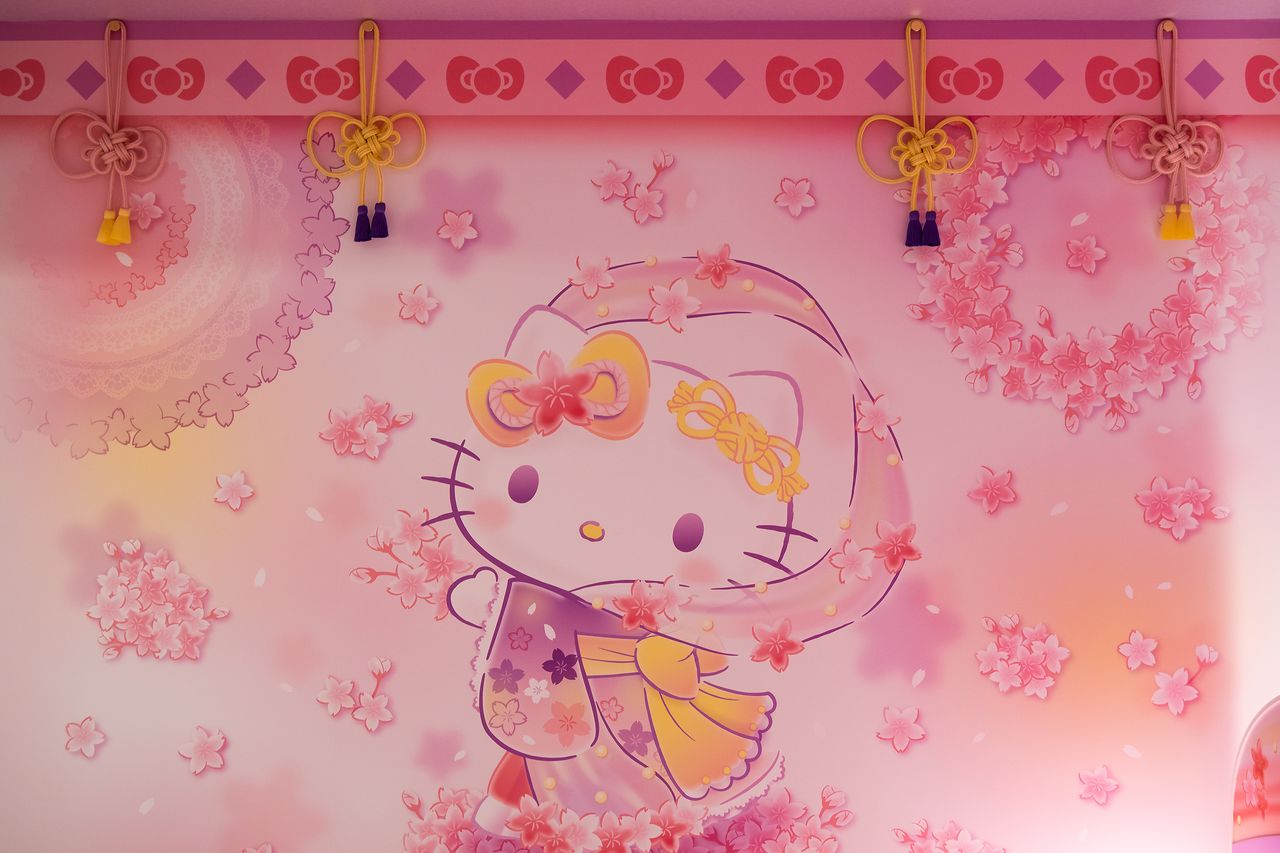 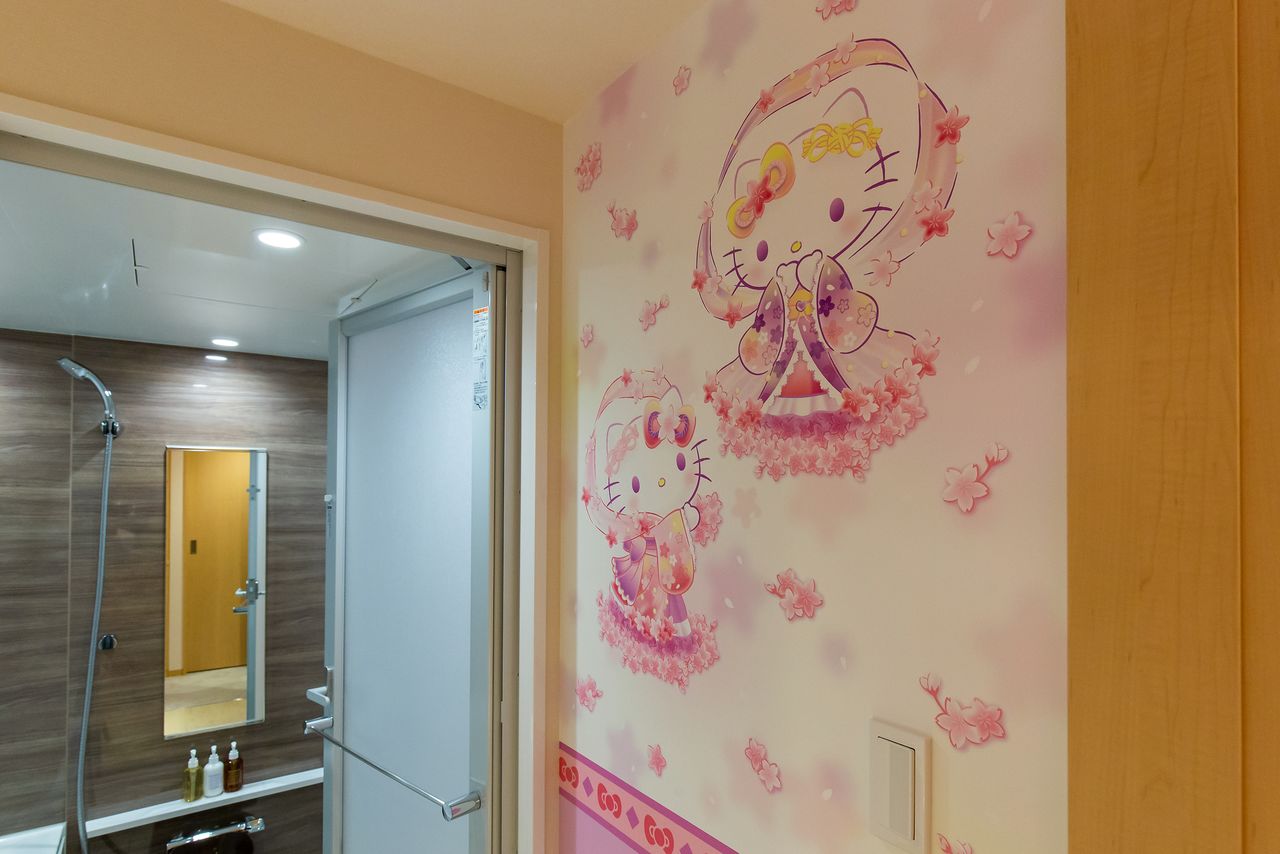 A Hello Kitty tennyo floats on the wall above the bathroom sink. 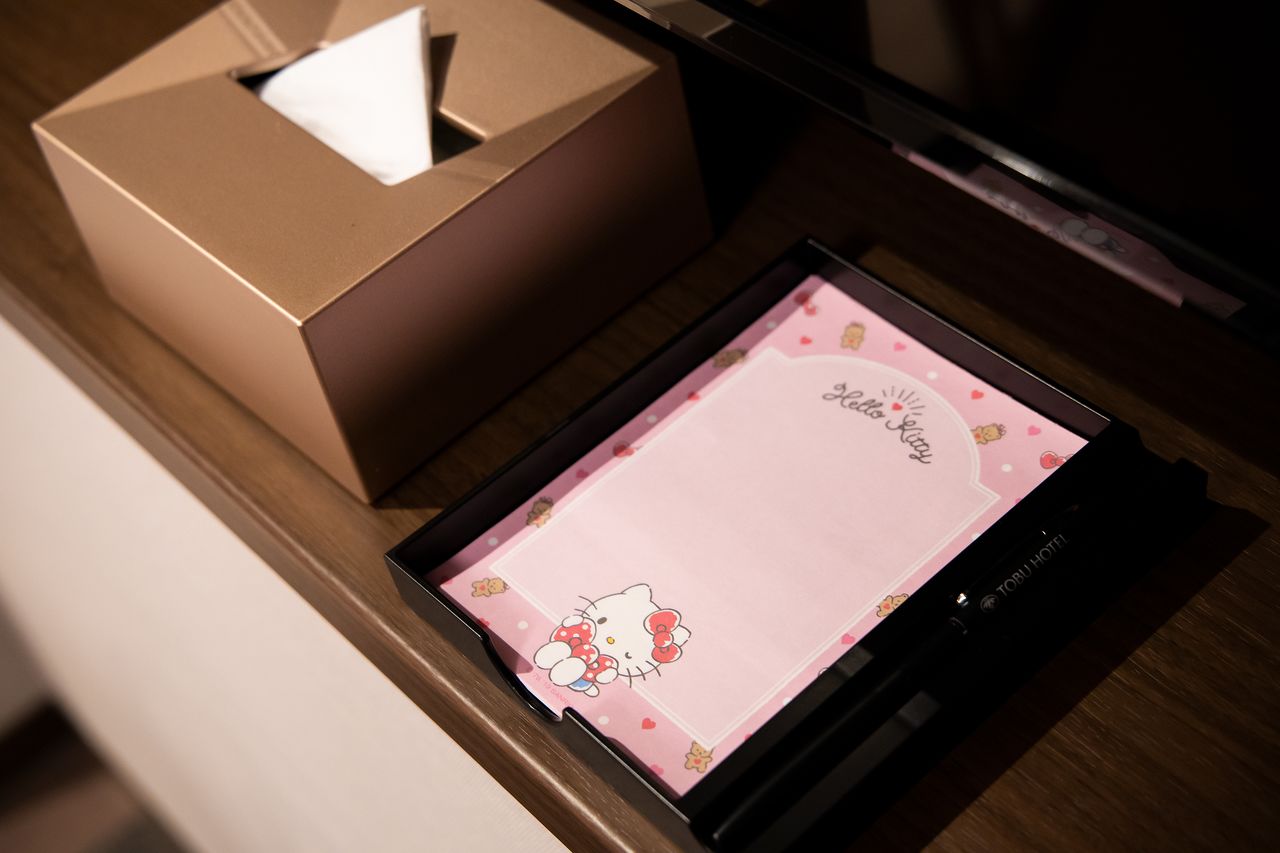 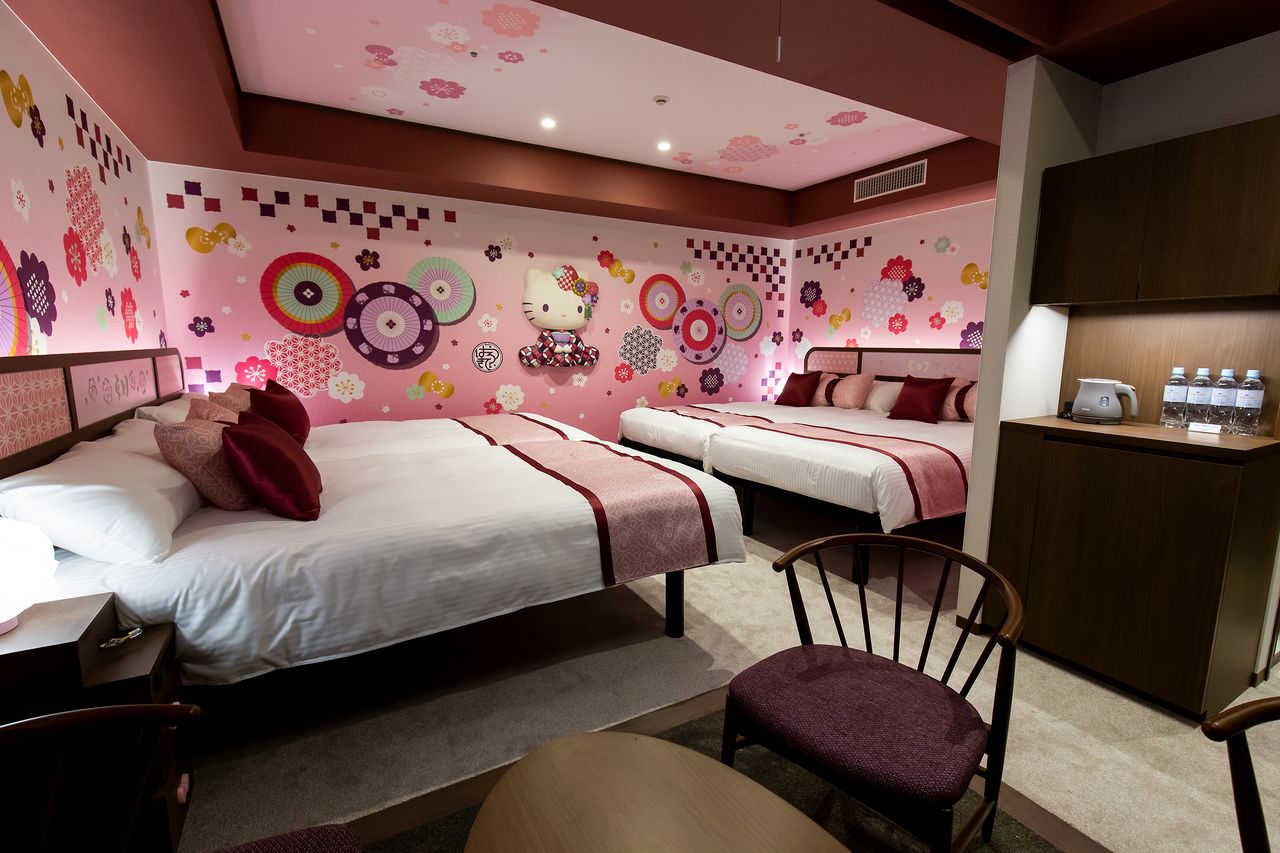 The Wa-Modern room is decorated with circles of Japanese umbrellas and other traditional motifs. 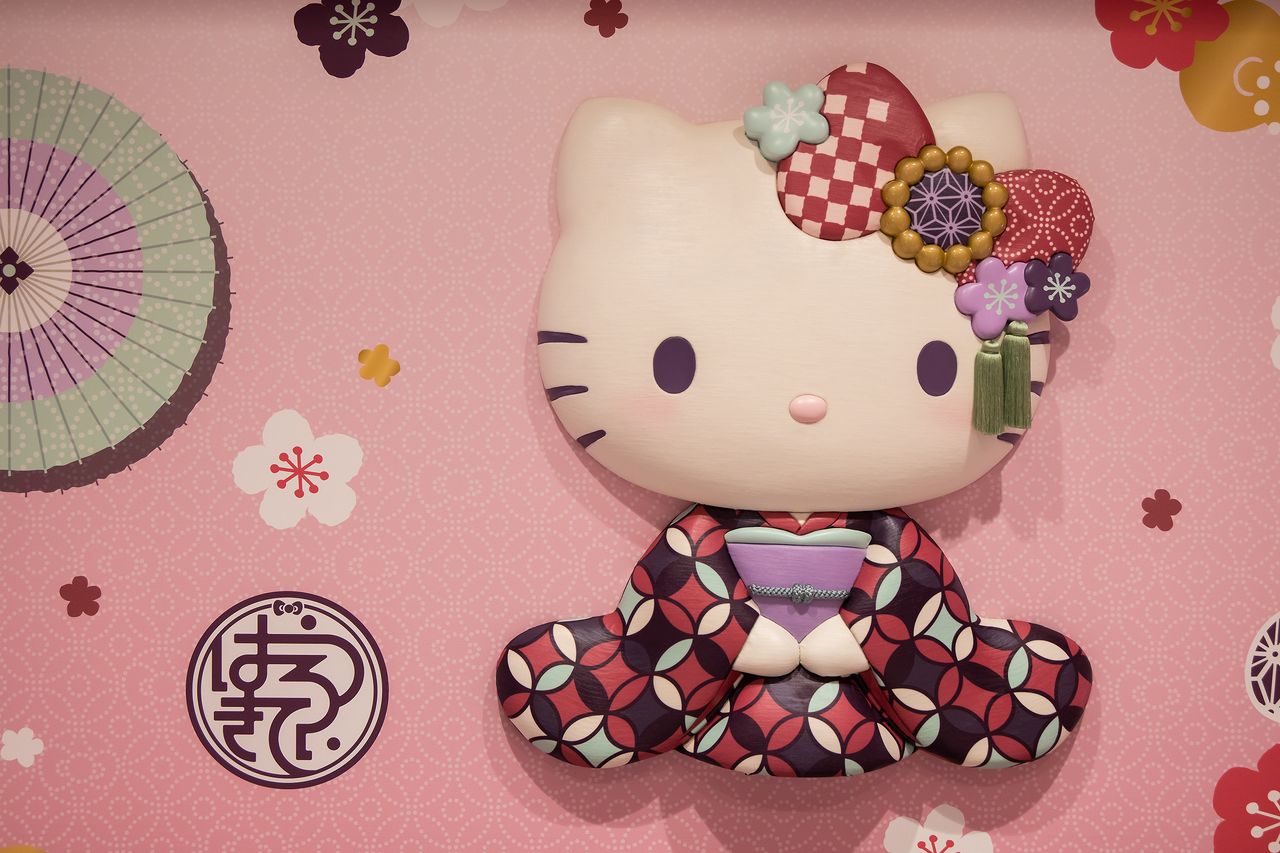 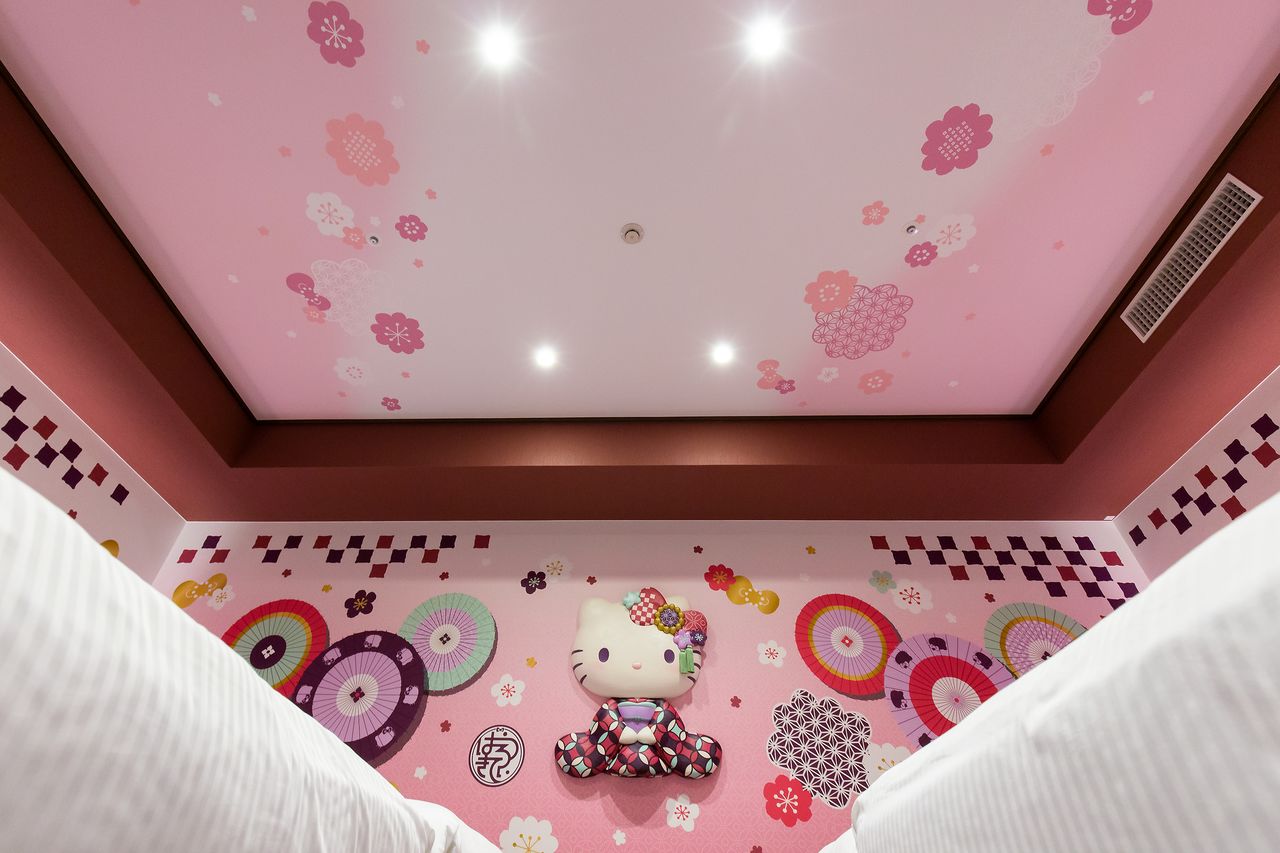 Even the ceiling is pink and embellished with chic traditional motifs to match the rest of the room. 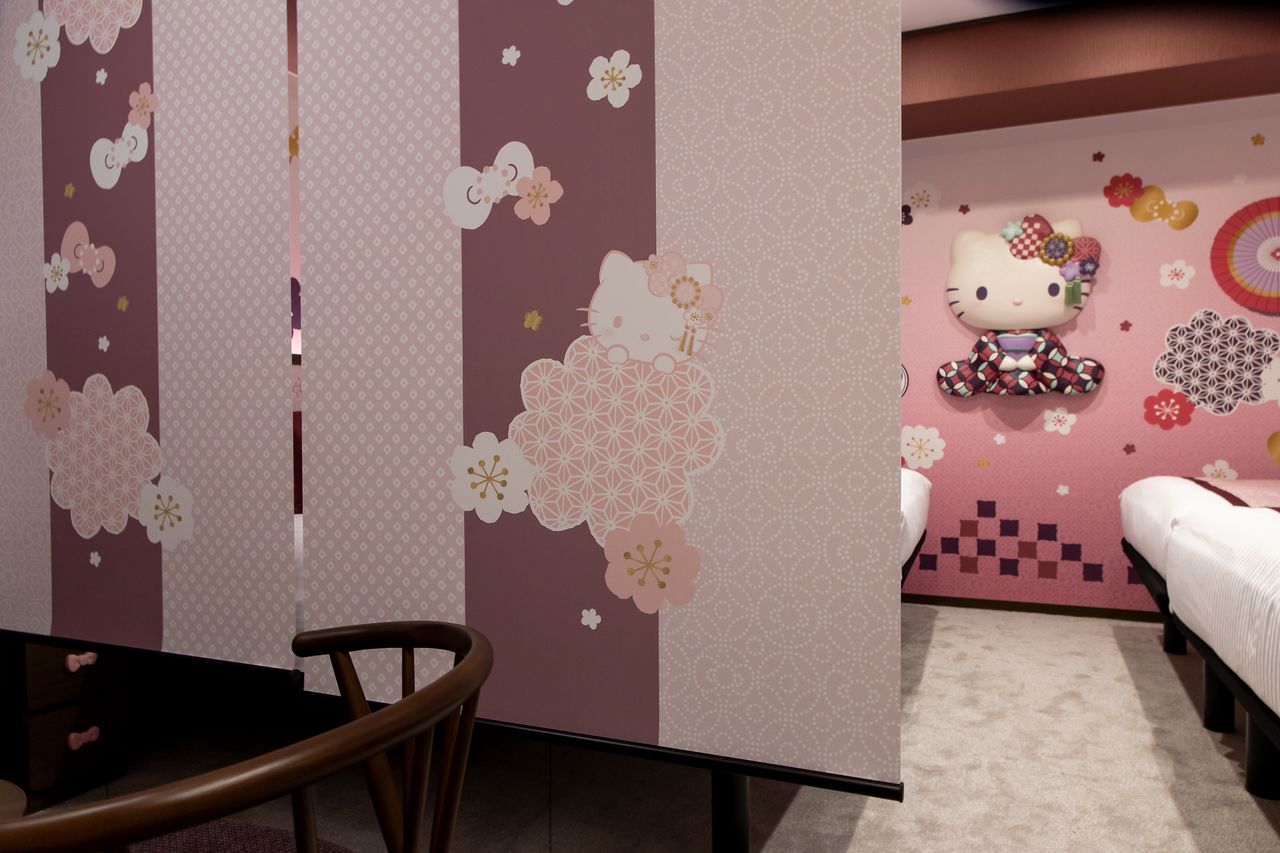 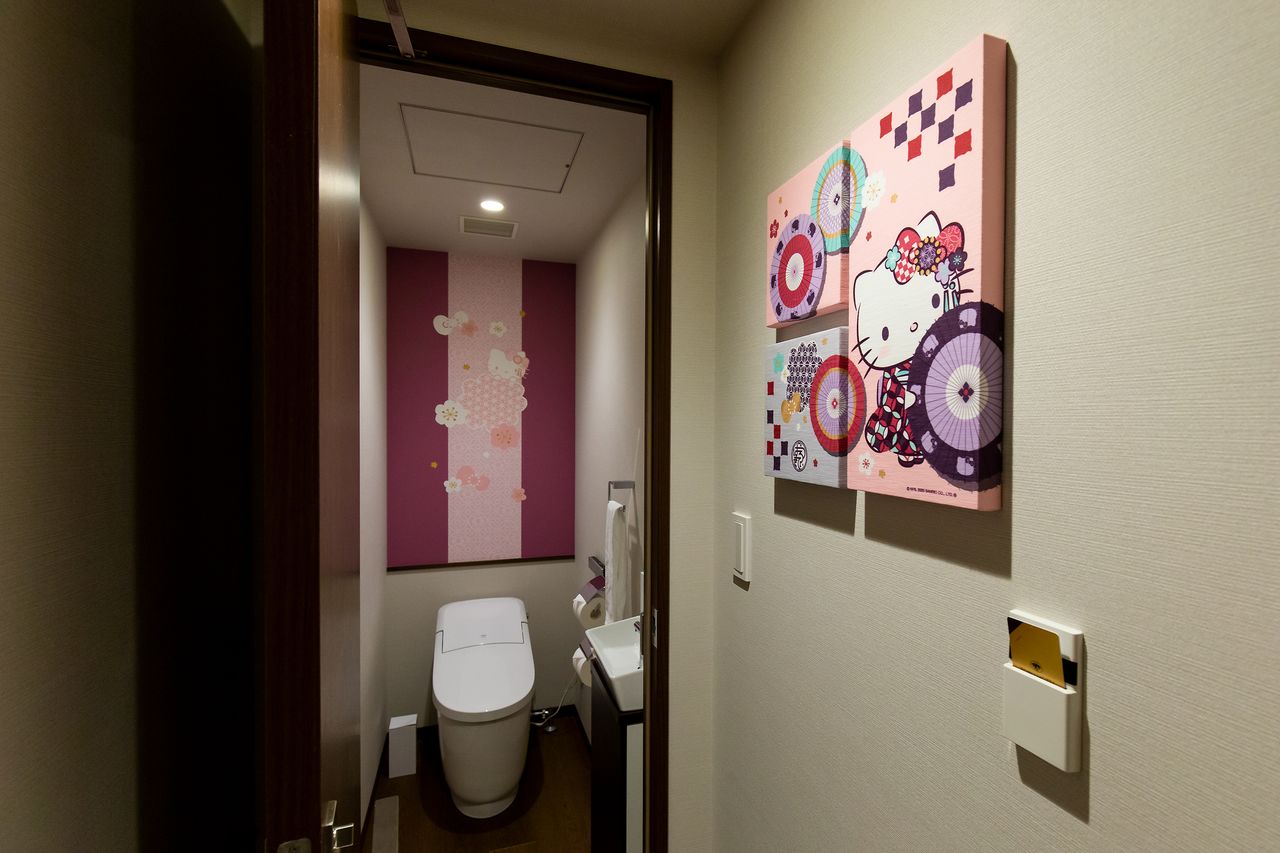 Turn-of-the-century Taishō era chic extends even to the toilet. 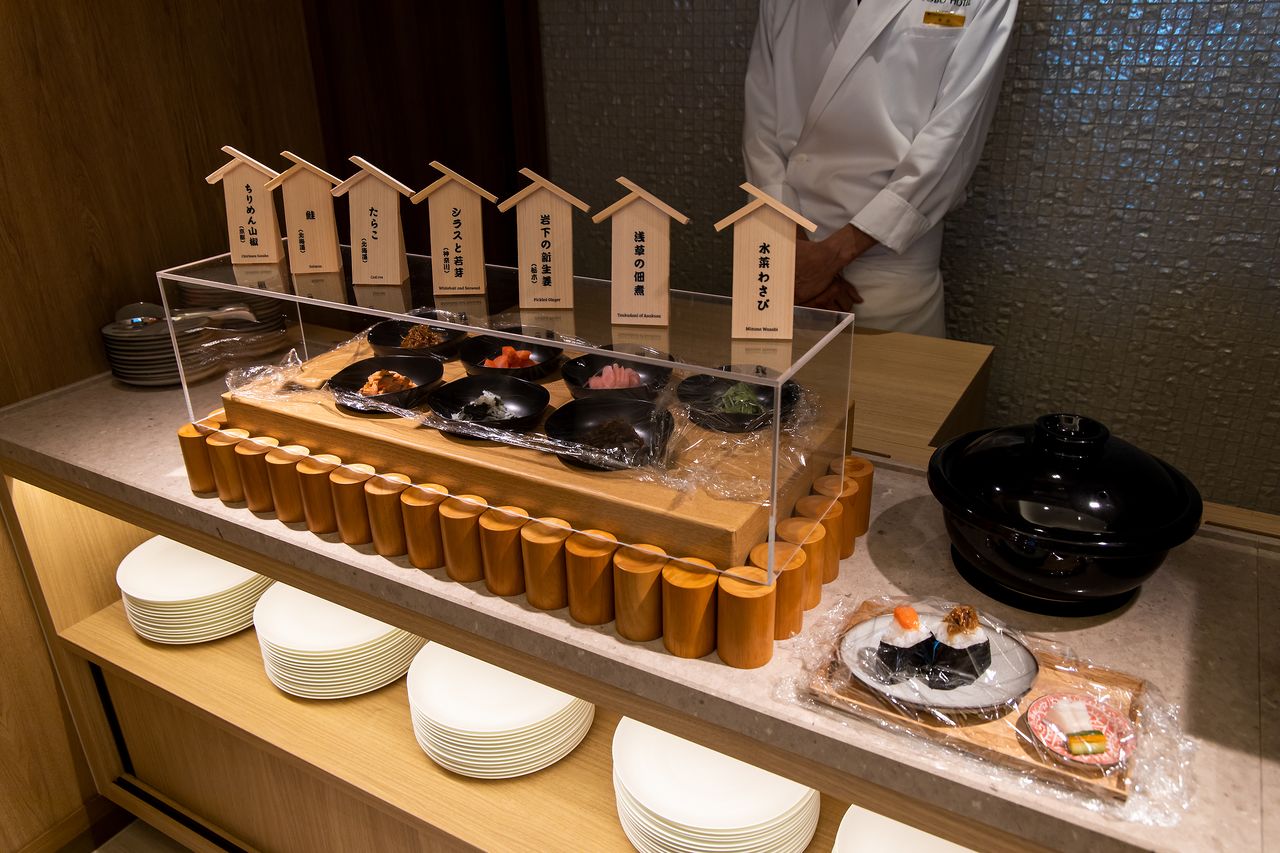 Breakfast buffet of onigiri rice balls. Guests can choose from a variety of delicious fillings ranging from conventional salmon and cod roe to Asakusa tsukudani, a fish-based paste, and other local specialties.