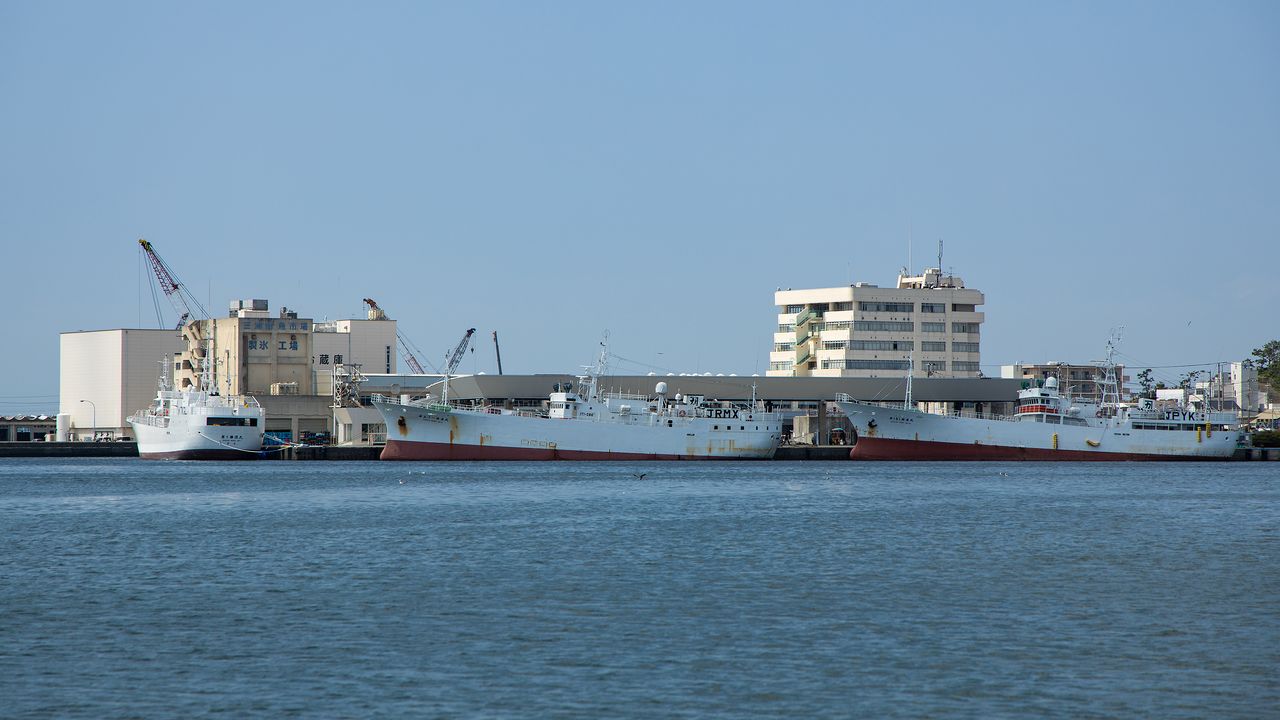 Tuna Town: A Tour of Misaki Port on the Miura Peninsula

Food and Drink Oct 30, 2020
Misaki Port on the Miura Peninsula is known for its picturesque views and large tuna hauls. Easily accessible by train, the port is a perfect destination for a one-day excursion from Tokyo and surrounding areas.

Misaki Port on the southwestern end of the Miura Peninsula in Kanagawa Prefecture has long prospered as a deep-sea fishing base. As one of 13 anchorages in Japan designated as a Class 3 fishing port, it harbors fishing vessels from around the country, many of which come to fish the rich coastal waters for tuna. The city of Miura where the port is located has a long association with the much coveted fish, earning it the nickname maguro no machi, or “tuna town.”

The port is easily reached by train from Tokyo and surrounding areas on the Keikyū Main and Kurihama lines. From Shinagawa Station, it takes 90 minutes to reach Misakiguchi Station, where passengers can then change to a bus bound for Misakikō, which is a 15-minute ride away. Visitors will find the area around the port teeming with tourists who have come to try out the restaurants specializing in tuna dishes and to visit scenic Jōgashima and the Keikyū Aburatsubo Marine Park. 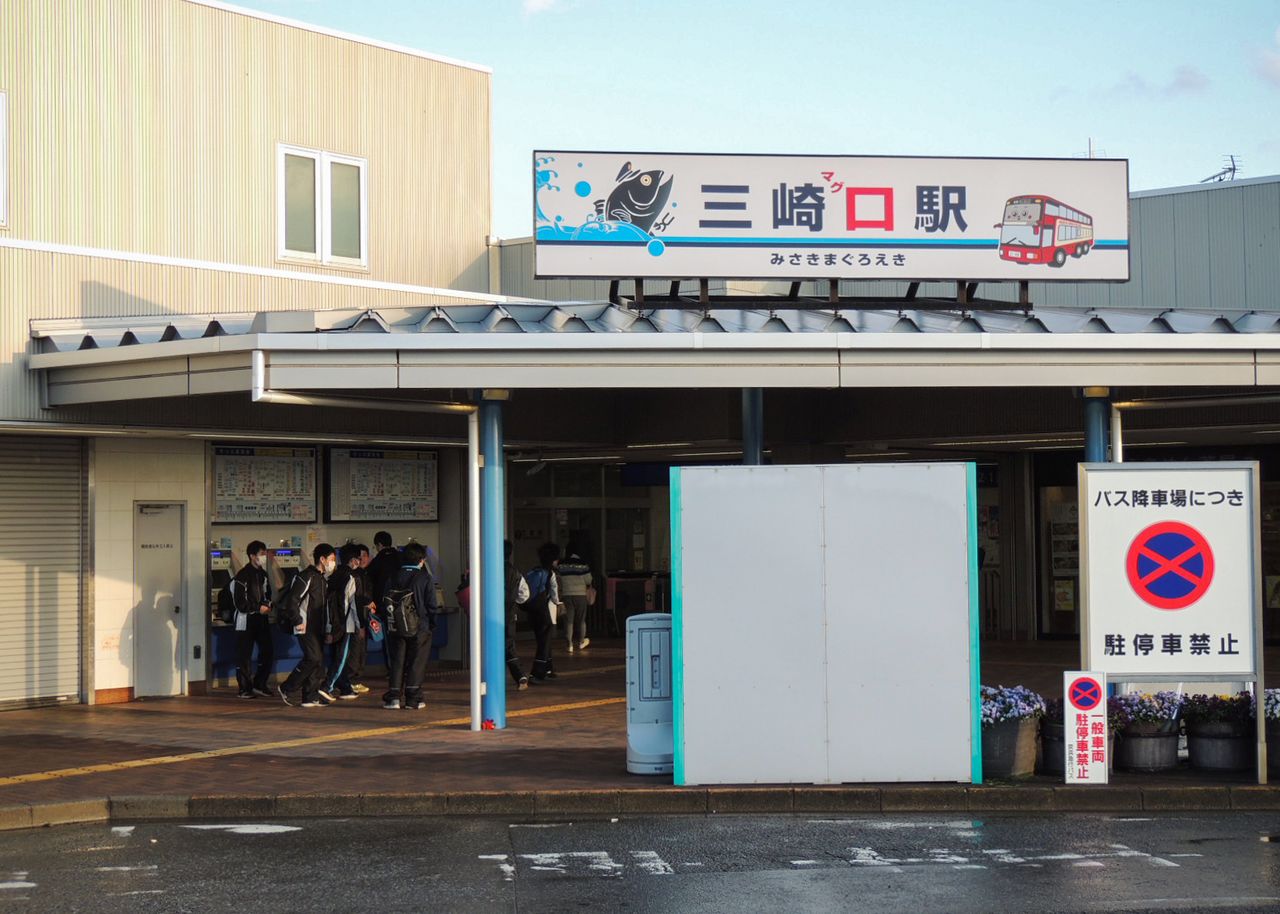 The signboard for Misakiguchi Station contains red lettering written in phonetic hiragana script that changes the reading to “Misaki Maguro Station” (Misaki Tuna Station), a humorous nod to the port’s fame as a base for tuna fishing. (Photo by the author) 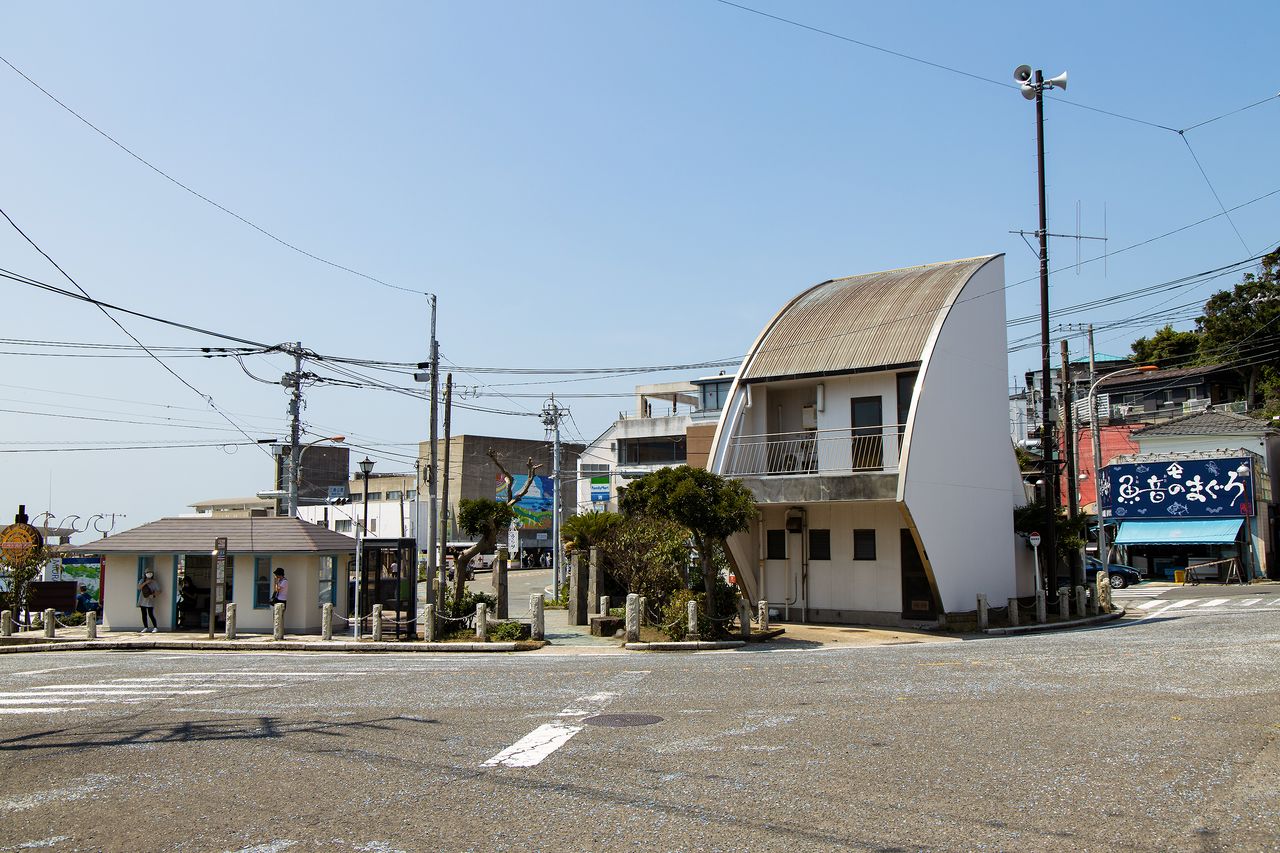 The Misakikō bus stop, located in front of the small building to the left, is surrounded by restaurants specializing in tuna.

Adjacent to the Misaki Port is a large facility referred to by locals simply as the Misaki fish market. Completed in the spring of 2018, it is Japan’s first wholesale market for frozen tuna. On some days, as many as 900 frozen tuna line the polished market floor, a number rivaling the sprawling Toyosu fish market in Kōtō, Tokyo. 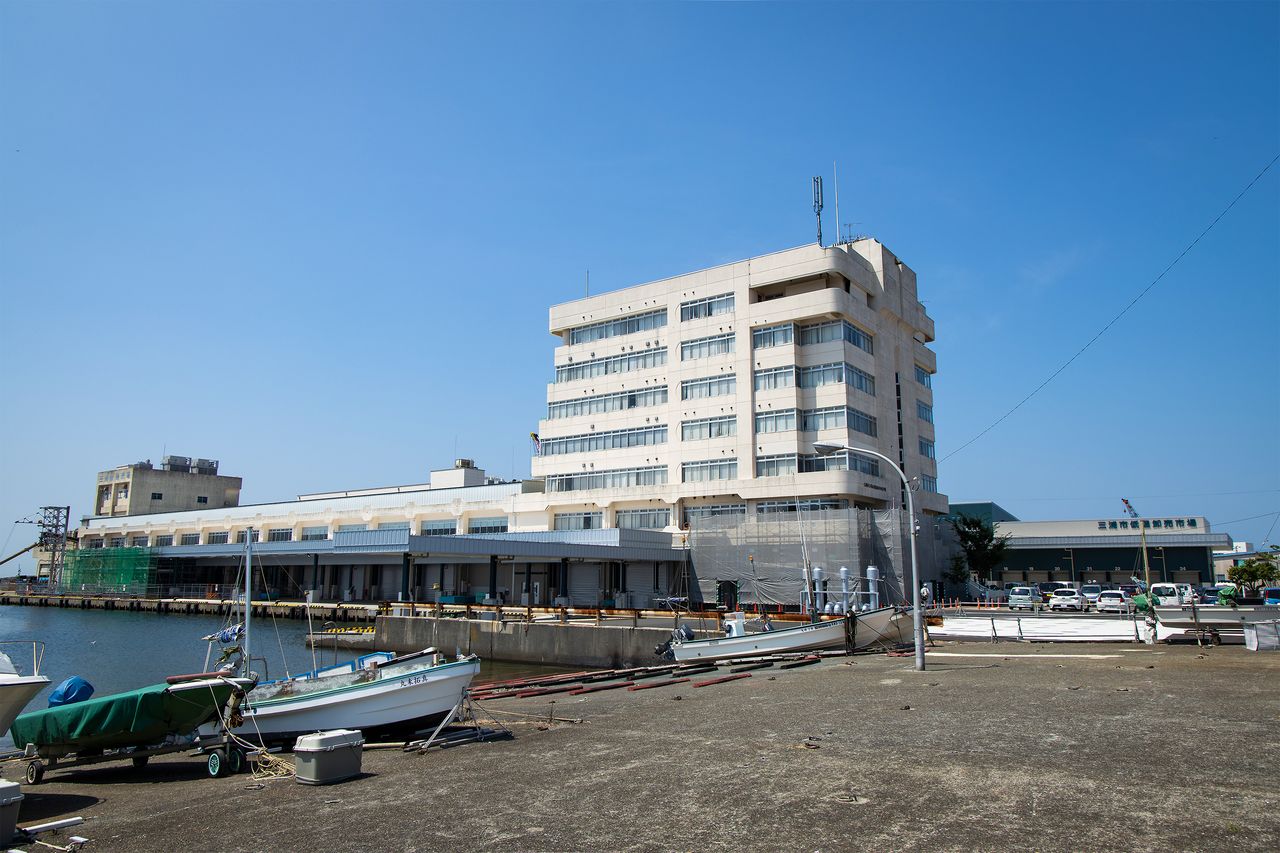 The Misaki fish market is a 5-minute walk from the Misakikō bus stop. The building to the far right is the refrigerated facility where the tuna auctions take place.

The market’s tuna auction begins at eight in the morning. I happened to visit the auction site on a Saturday when volume tends to be small. Still, there were 190 bigeye tuna and 10 southern bluefin tuna, many of which bore labels indicating they were from a Taiwanese vessel. Buyers walked about carefully checking the quality of the red meat exposed in the tail cross-sections.

Unlike the lively auction style of Tokyo’s Toyosu market, here the buyers write their bids for price per kilo on a slip of paper and place it in a box. The auction results are displayed on an electric notice board located on a wall of the auction room. Bigeye tuna generally sells for around ¥500 to ¥1,800 per kilo. The higher priced fish is used for sushi and sashimi while tuna priced at ¥800 or less per kilo is generally used in minced tuna rolls and processed foods. 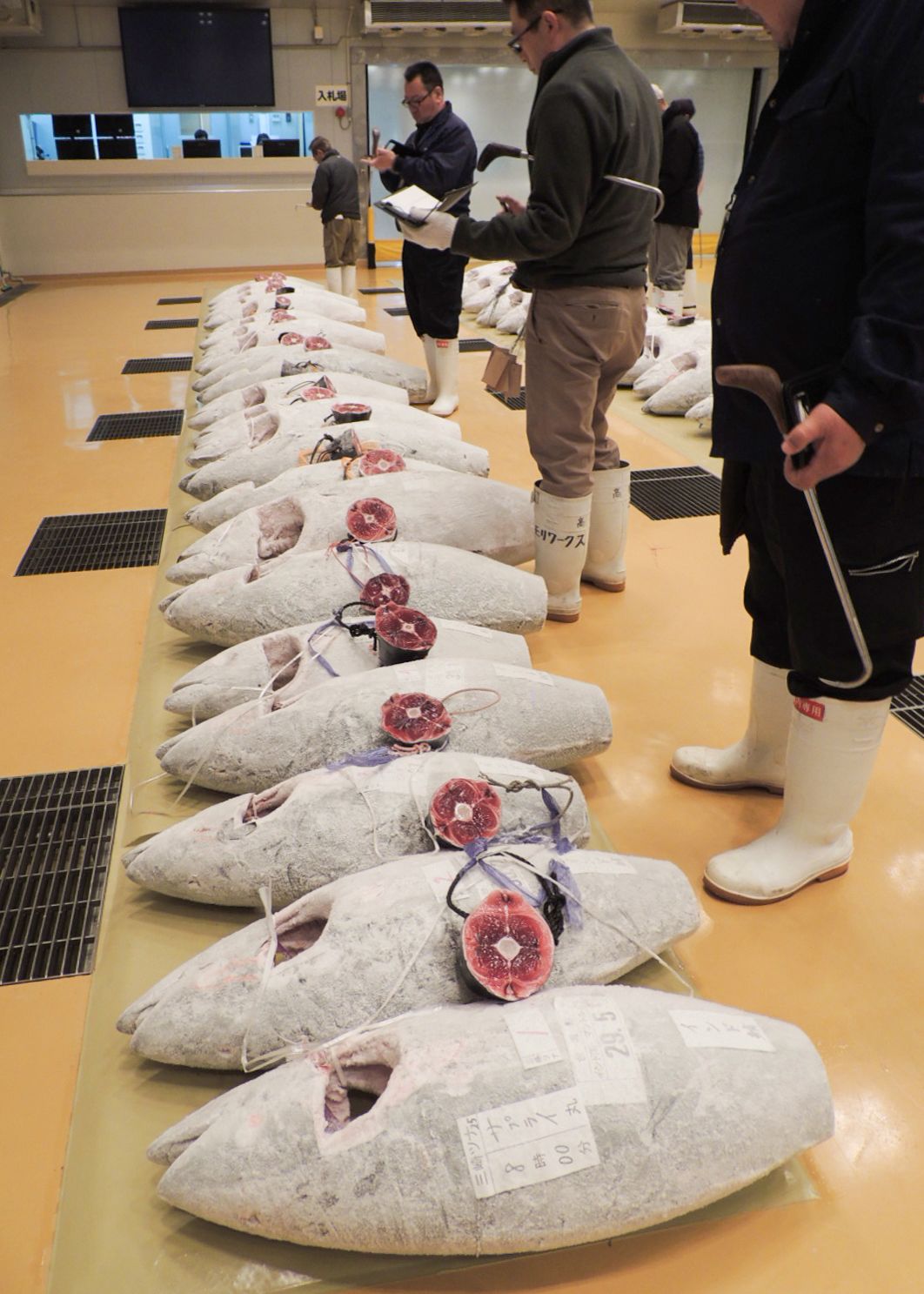 Buyers line up to examine the quality of the frozen tuna. The counter in the background is where written bids are submitted. (Photo by the author)

Visitors are normally allowed to watch the tuna auctions from a glassed-in gallery on the second floor, but the wholesale market has been closed to the general public during the coronavirus pandemic and a reopening date has yet to be decided. When auction viewing resumes, visitors can ask to be accompanied by a volunteer who will explain the workings of the wholesale market. 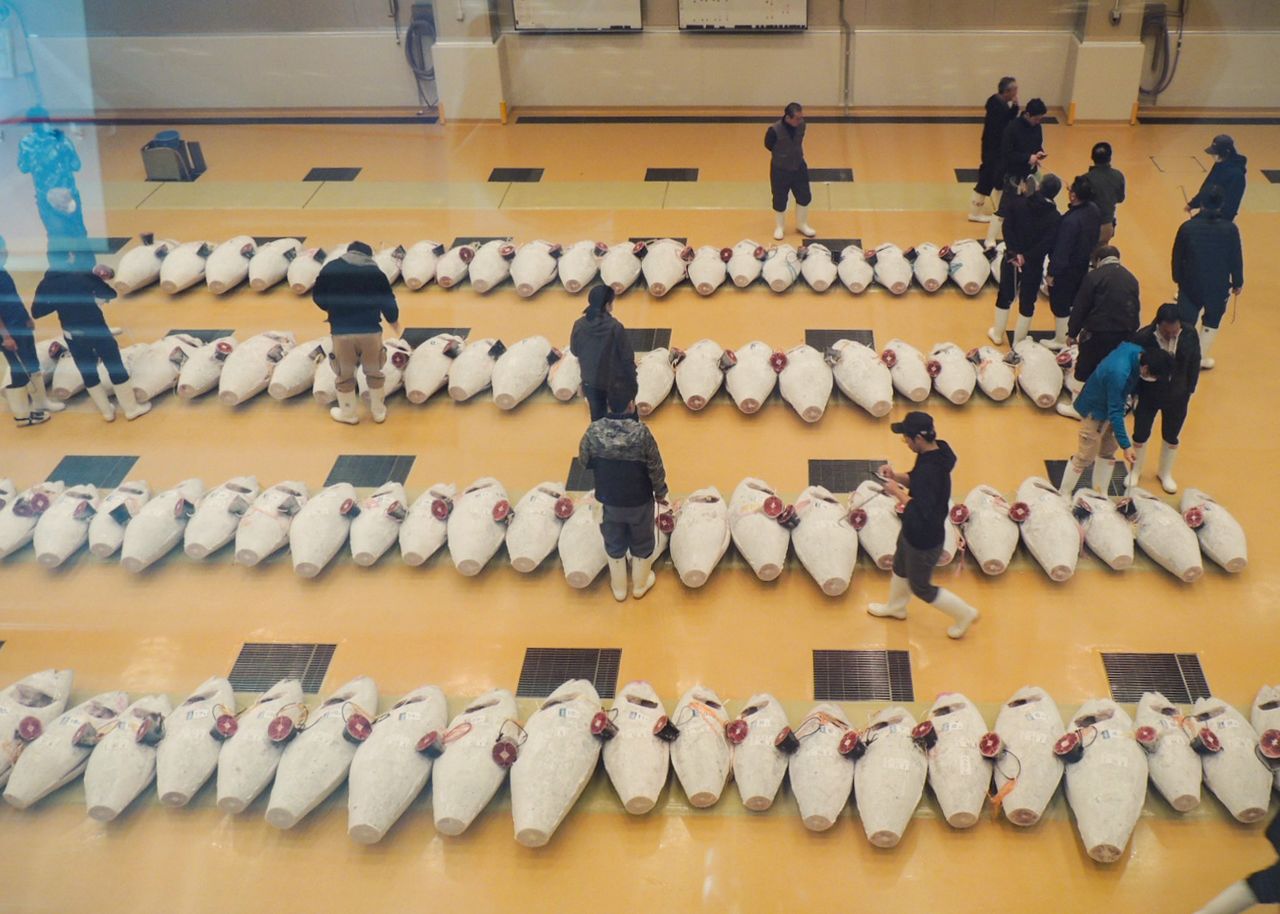 The view of the tuna auction from the visitors’ gallery on the second floor. Currently, the market is closed to the public. (Photo by the author)

At the dining hall located on the second floor of the market, visitors can savor a variety of dishes featuring fresh tuna and other local fish. The hall opens at 6:00 am and is quickly filled by people who work in the fish market as well as visitors who come to eat the many offerings on the menu, such as sashimi and grilled and deep-fried fish. The dining hall is a favorite stop-off for groups touring the whole of the Miura Peninsula. 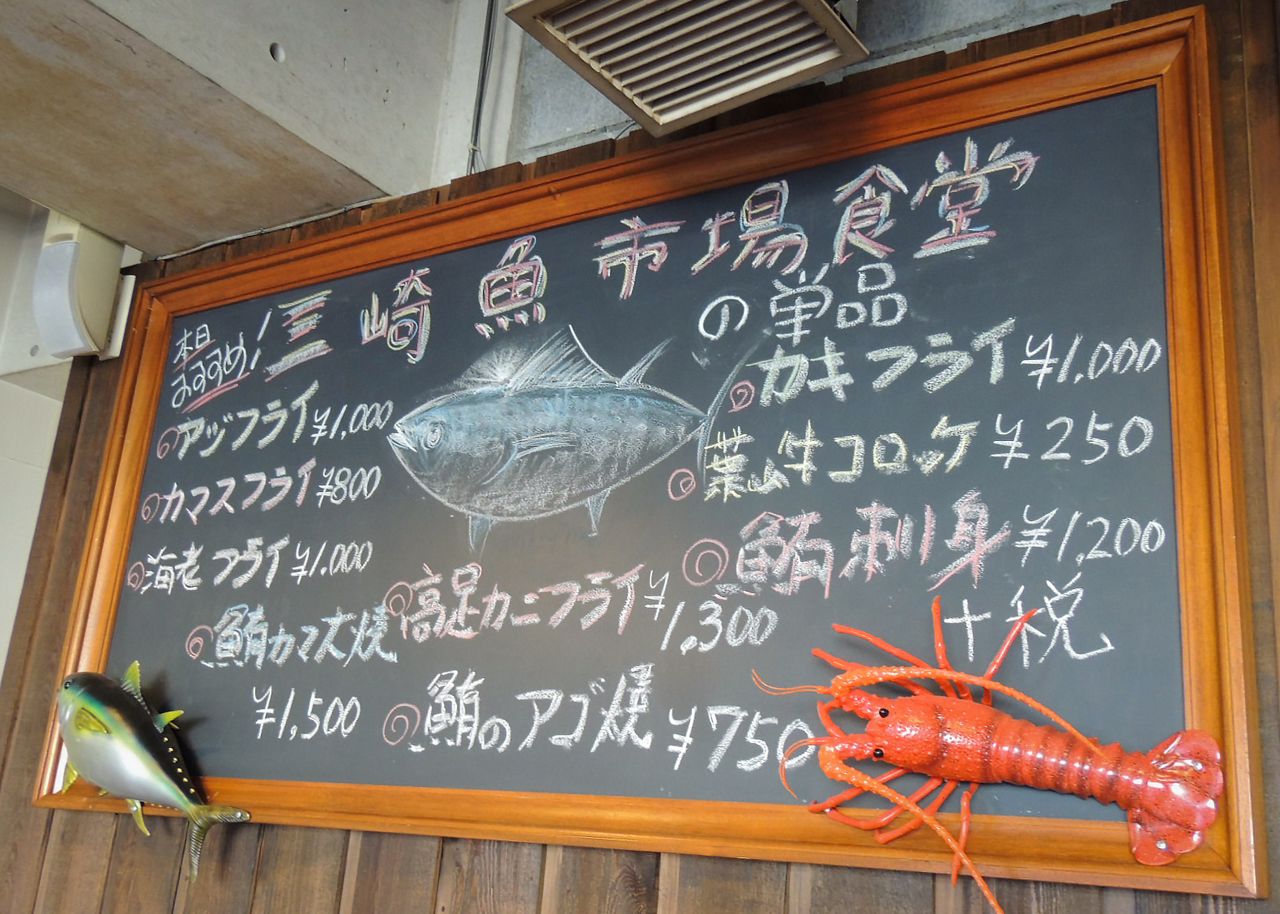 The fish market dining hall offers especially rare cuts of tuna. It is open from 6:00 am to 3:00 pm on weekdays and 6:00 am to 4:00 pm on weekends and holidays. It is usually closed on Wednesdays. (Photo by the author)

The daily breakfast special includes a choice of grilled fish or sashimi. On the day I visited, the offering was salted and grilled mackerel, rice, miso soup, nattō, a small side dish, and pickles, all for just ¥610. Staff told me that the special sells out quickly and advised visitors to come early. The tuna bowl, priced at ¥1,400, made from fresh tuna landed at Misaki Port is especially popular. 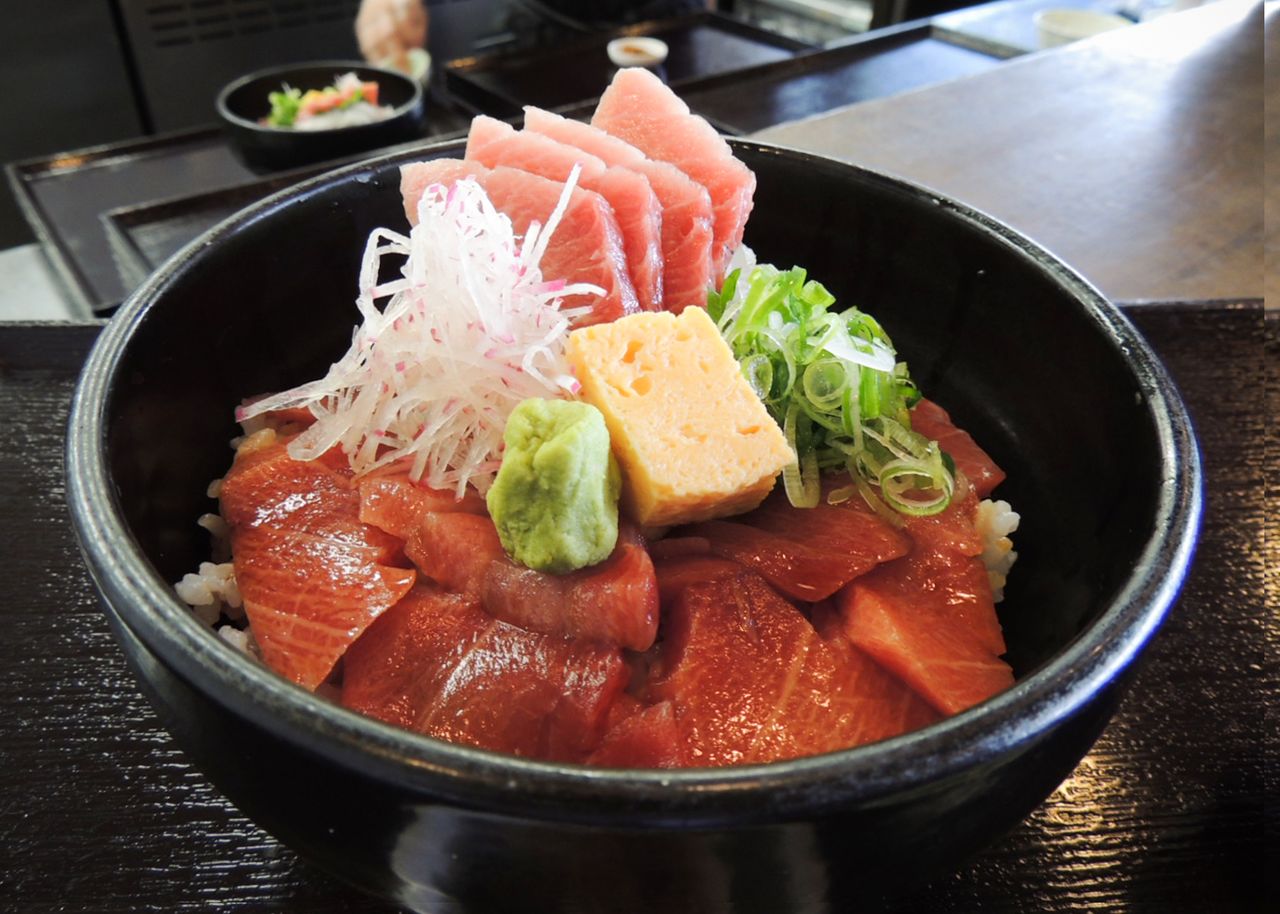 The tuna bowl features a generous portion of tuna slices dipped in savory sauce and an additional topping of delectable toro fatty tuna slices atop rice. (Photo by the author)

The top menu item is the daily market special featuring sashimi and grilled fish, costing ¥1,500. On the day I visited, the sashimi plate consisted of tuna, blackfish, sazae (horned turban), and shrimp. This was accompanied by salted and grilled kama, tuna meat cut from around the gills. The second-most popular item is the market special with local fried fish and sashimi. The set comes with fried horse mackerel, Japanese sea bass, squid, and Japanese butterfish accompanied by a plate of chopped tuna pieces. Portions are enough for several people to share. 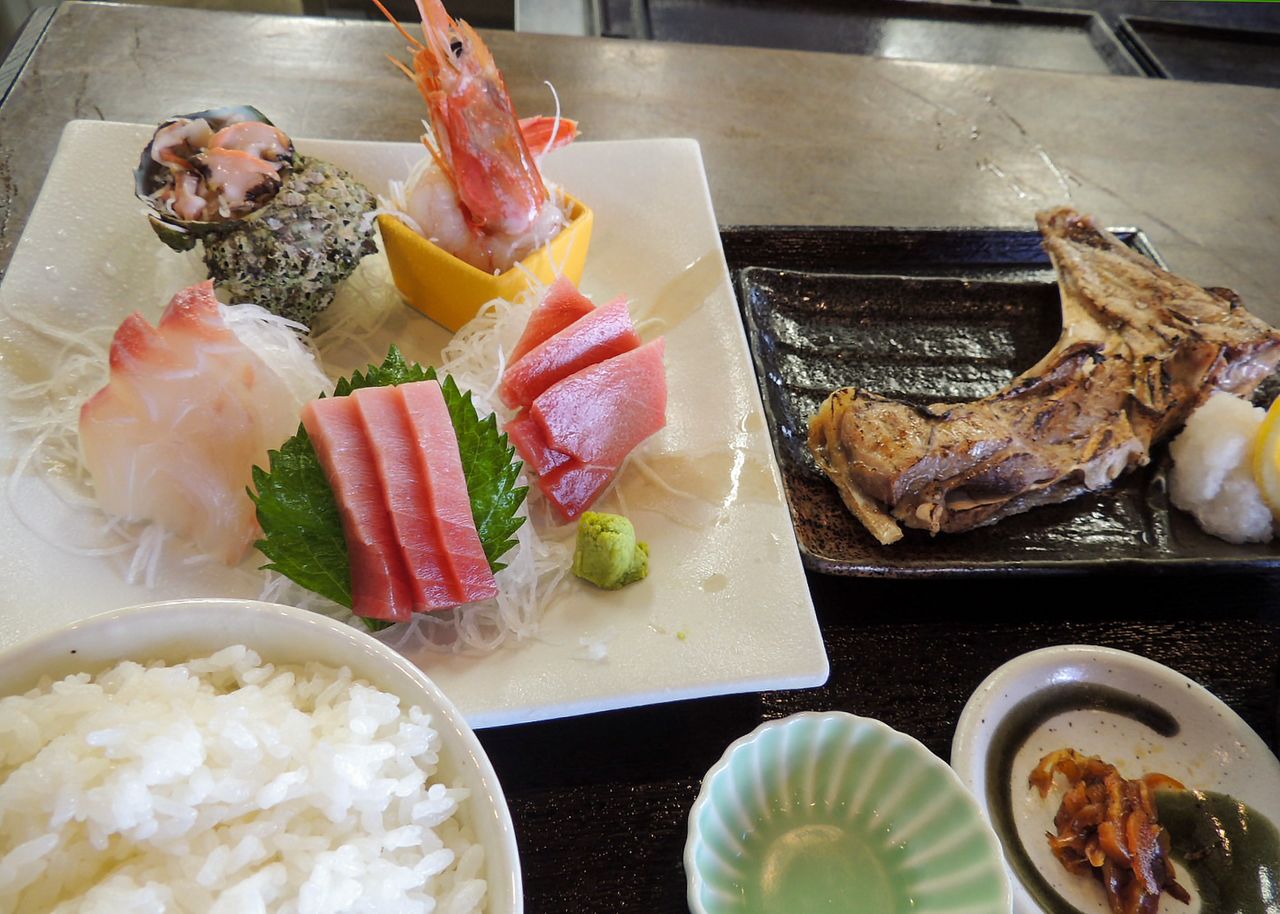 The daily market special with sashimi and grilled fish. (Photo by the author)

Urari: The Place for Local Specialties

On the east side of the fish market is the Misaki Fisharina Wharf Urari, a commercial space that includes the Miura Citizen Hall and the Miura Misaki Sea Station facility. The complex is just a short walk from the Misakikō bus stop and serves as the boarding site for the Nijiiro Sakanagō, a vessel with windows below the waterline for viewing sea life, and for ferry to the nearby island of Jōgashima. A Miura Rental Bicycle port is next to the wharf. 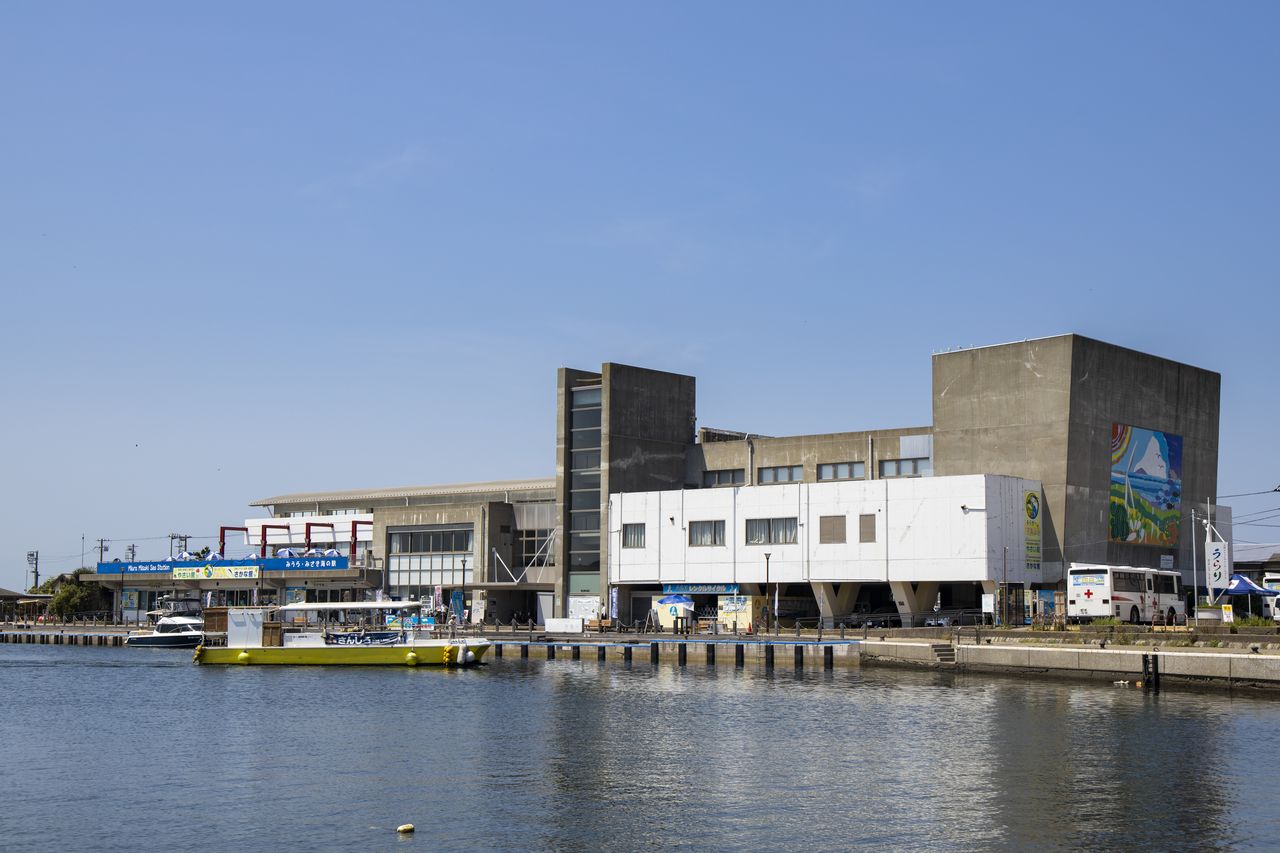 The Misaki Fisharina Wharf Urari complex. The ferry to the island of Jōgashima can be seen preparing to dock. 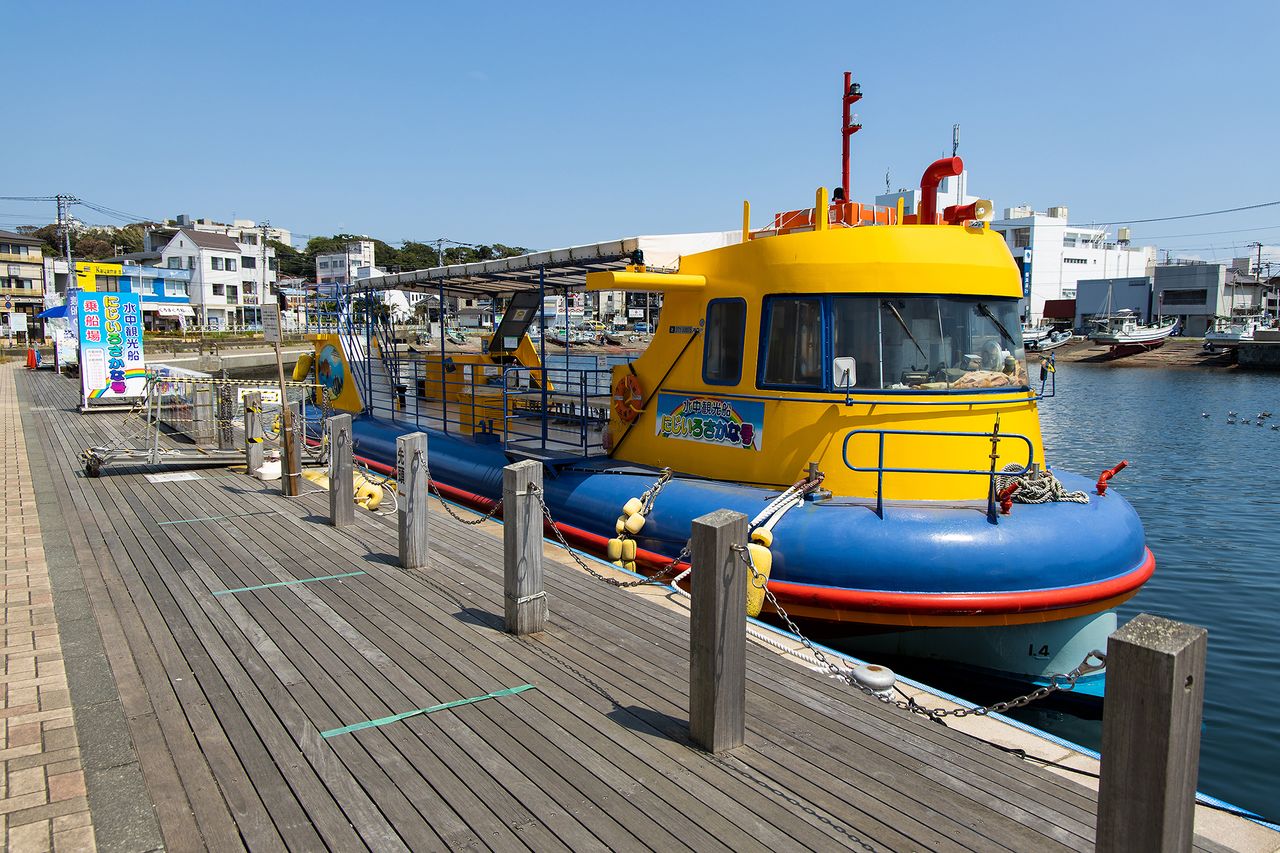 The Nijiiro Sakanagō has windows below the waterline for viewing the underwater seascape.

The Urari Marché is a teeming market of vendors selling Misaki tuna and fresh Miura vegetables. The first floor is dedicated to seafood vendors with a total of 12 booths selling tuna, a selection of local fish, seafood products, prepared seafood snacks, and souvenirs. All the items offered are of the highest quality, and mixed in with the tourists are buyers from the local restaurants. 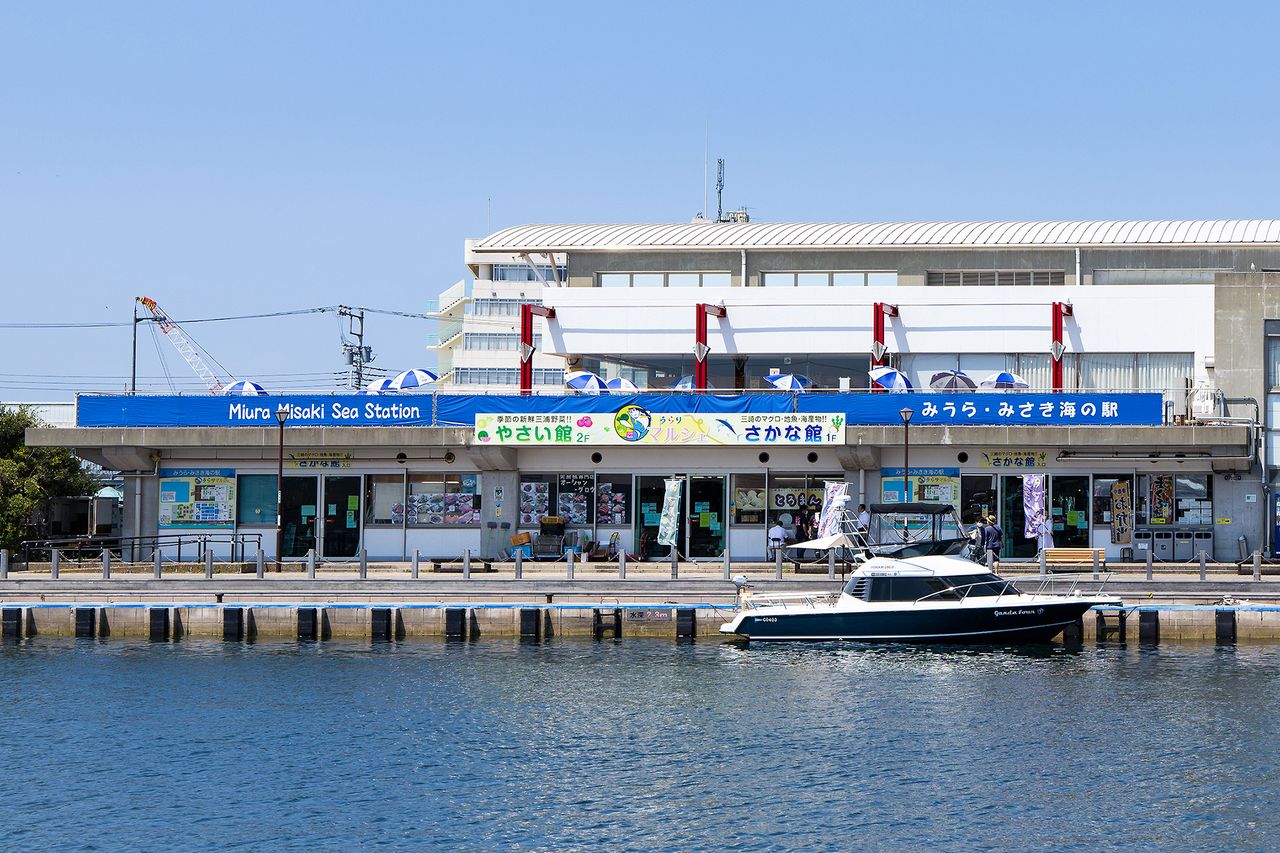 The selection of tuna includes Pacific blue fin tuna, bigeye tuna, and yellowfin tuna sold in large blocks and bite-size chunks as well as in combination sashimi plates with other local fish. Visitors can also savor cuts of kama, hoho from the cheeks of the fish, rolls of minced tuna and Welsh onion, and tuna chunks preserved in savory soy sauce. Snacks are also available, including deep-fried satsuma-age, croquette patties made from ground tuna, and skewers of fried tuna chunks.

On the second floor is a market for fresh vegetables. Visitors will find not only fresh produce from farms around Misaki, but also a special selection of vegetables from Misaki’s sister city, Suzaka in Nagano Prefecture. A café and rest space are also available where customers can take a coffee break or stop to eat snacks purchased at nearby stalls. 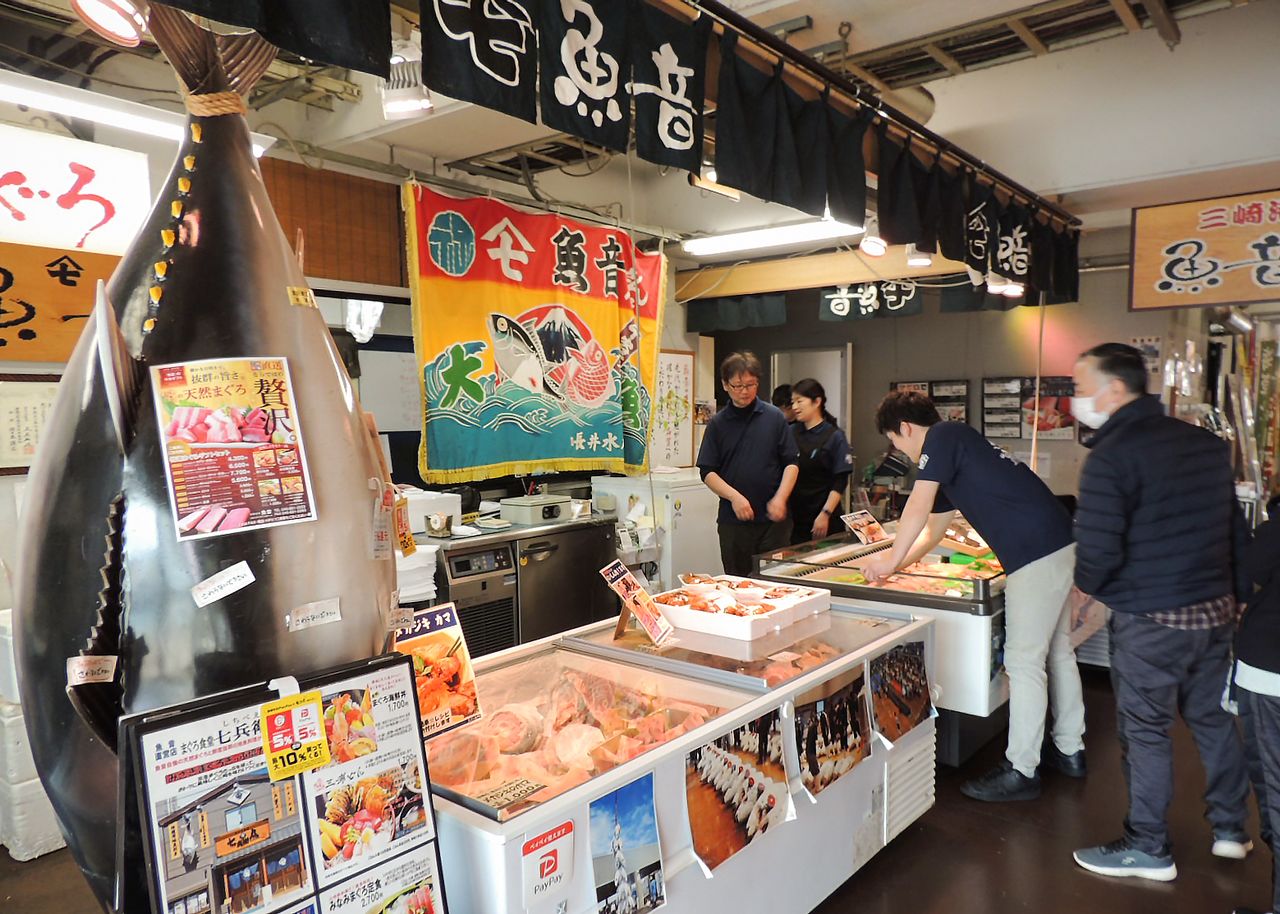 The market echoes with the cheerful calls of the vendors selling fresh tuna products. (Photo by the author) 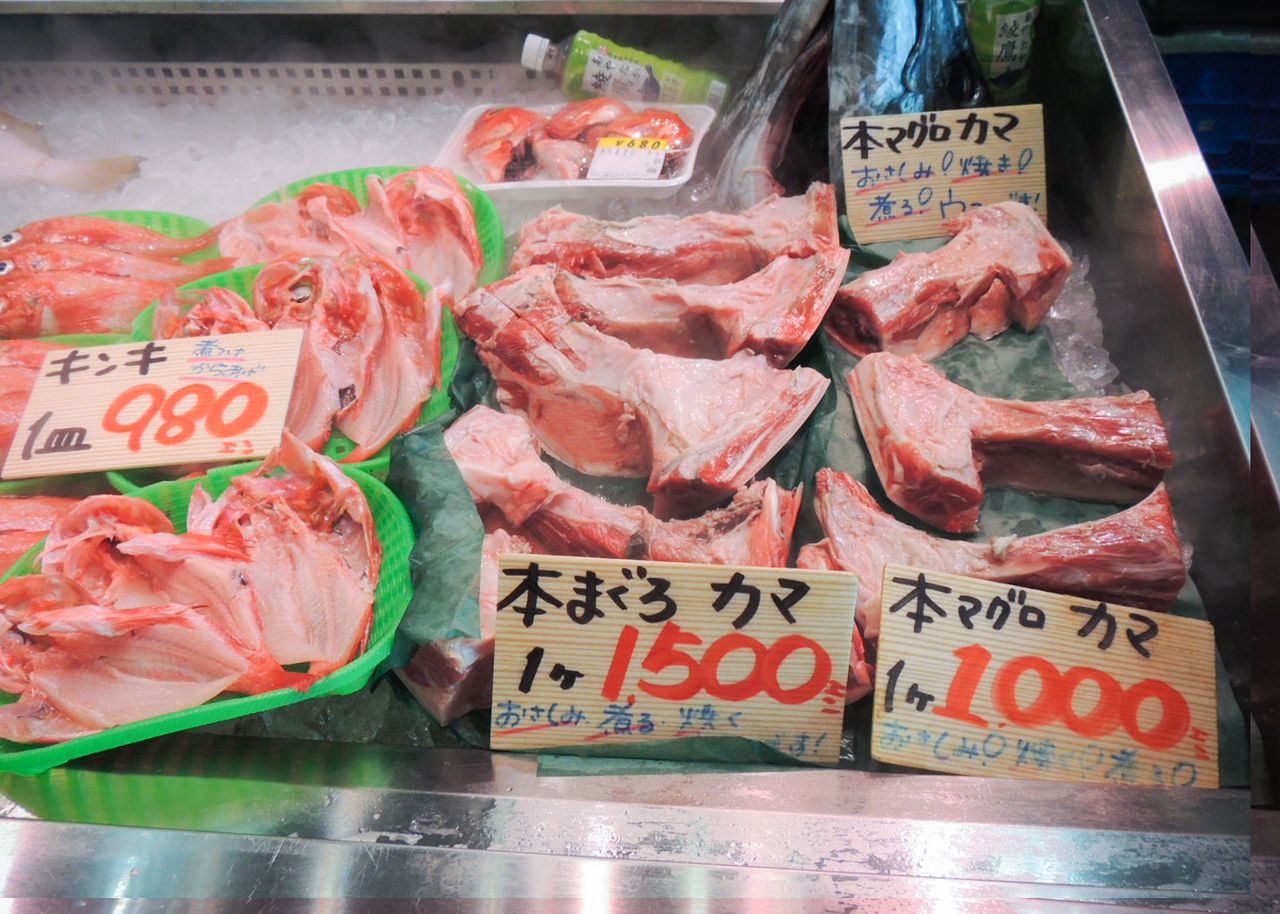 One of the attractions of Misaki are the unusual cuts of tuna available at reasonable prices. (Photo by the author) 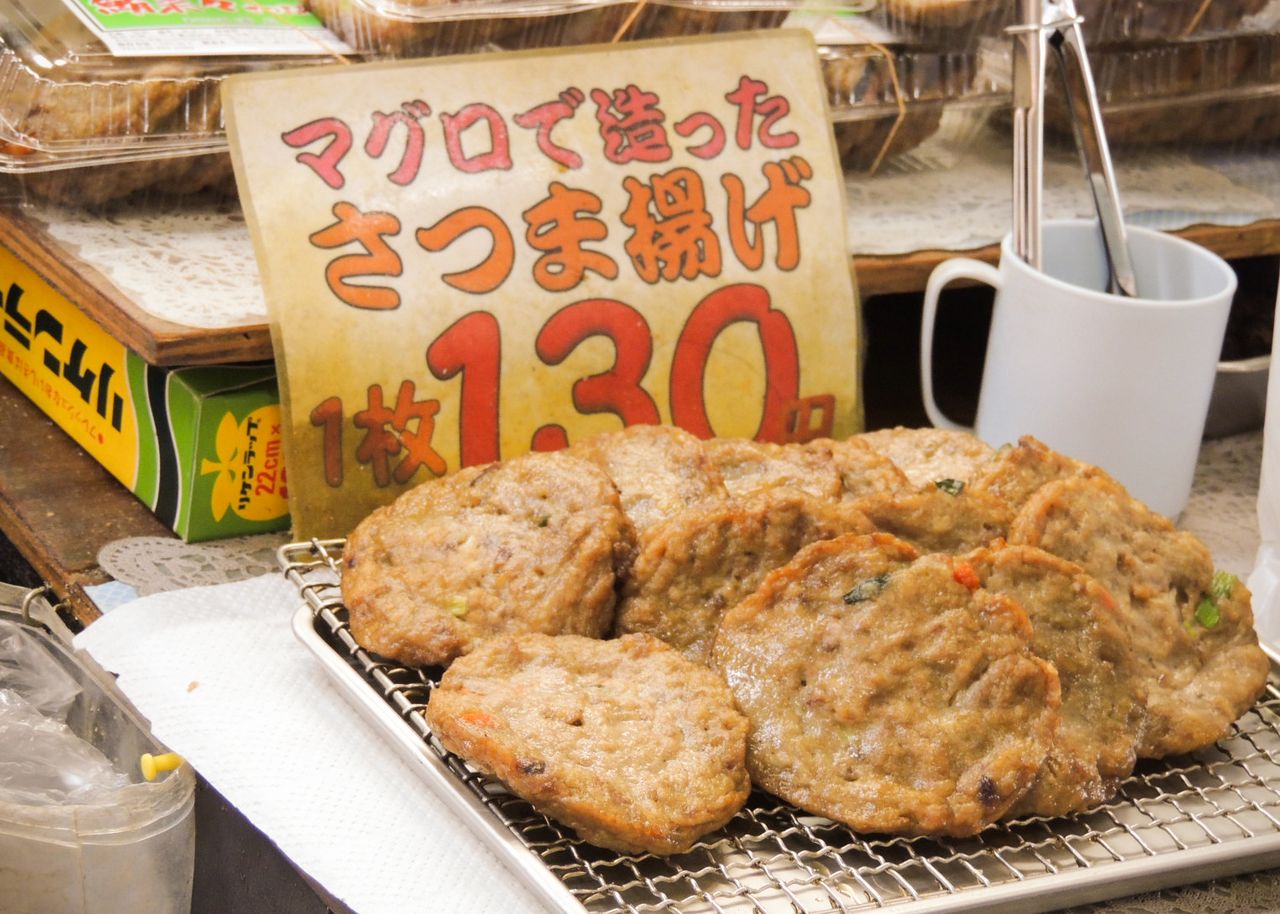 There are an abundance of stalls offering tasty foods to munch on. (Photo by the author) 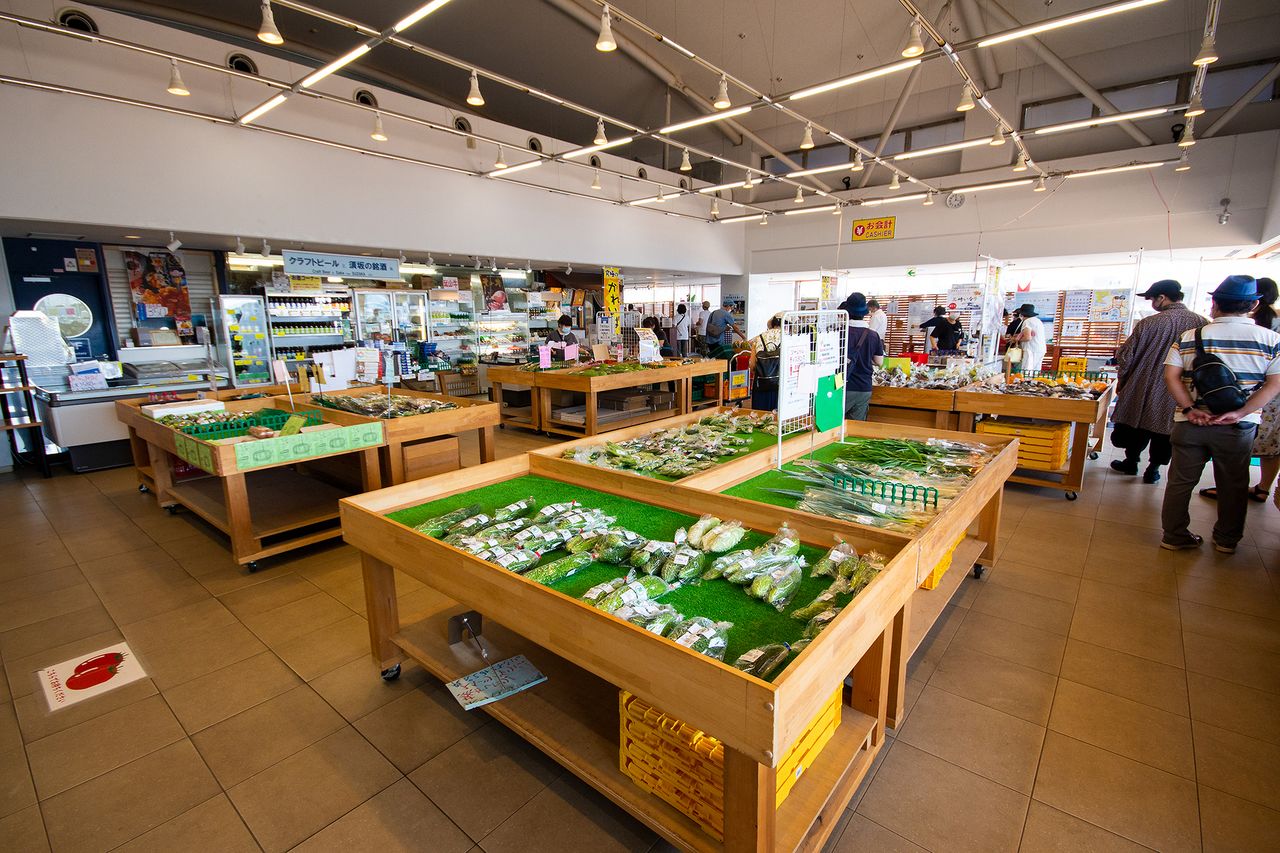 The second floor of Urari Marché is devoted to stands of fresh local vegetables. A beverage area offers a variety of freshly squeezed fruit juices as well as a selection of local beers.

Visitors travelling to Misaki by train can take advantage of the Keikyū line’s Misaki Maguro Day Trip Ticket. The ticket includes roundtrip train and bus fare, food coupon for a tuna meal, and a ticket for use at one of the leisure facilities or souvenir shops. The cost from Shinagawa Station is ¥3,570, but will vary according to the station visitors are boarding from. The meal coupon can be used at more than 30 restaurants and eateries, including the Misaki fish market dining hall. 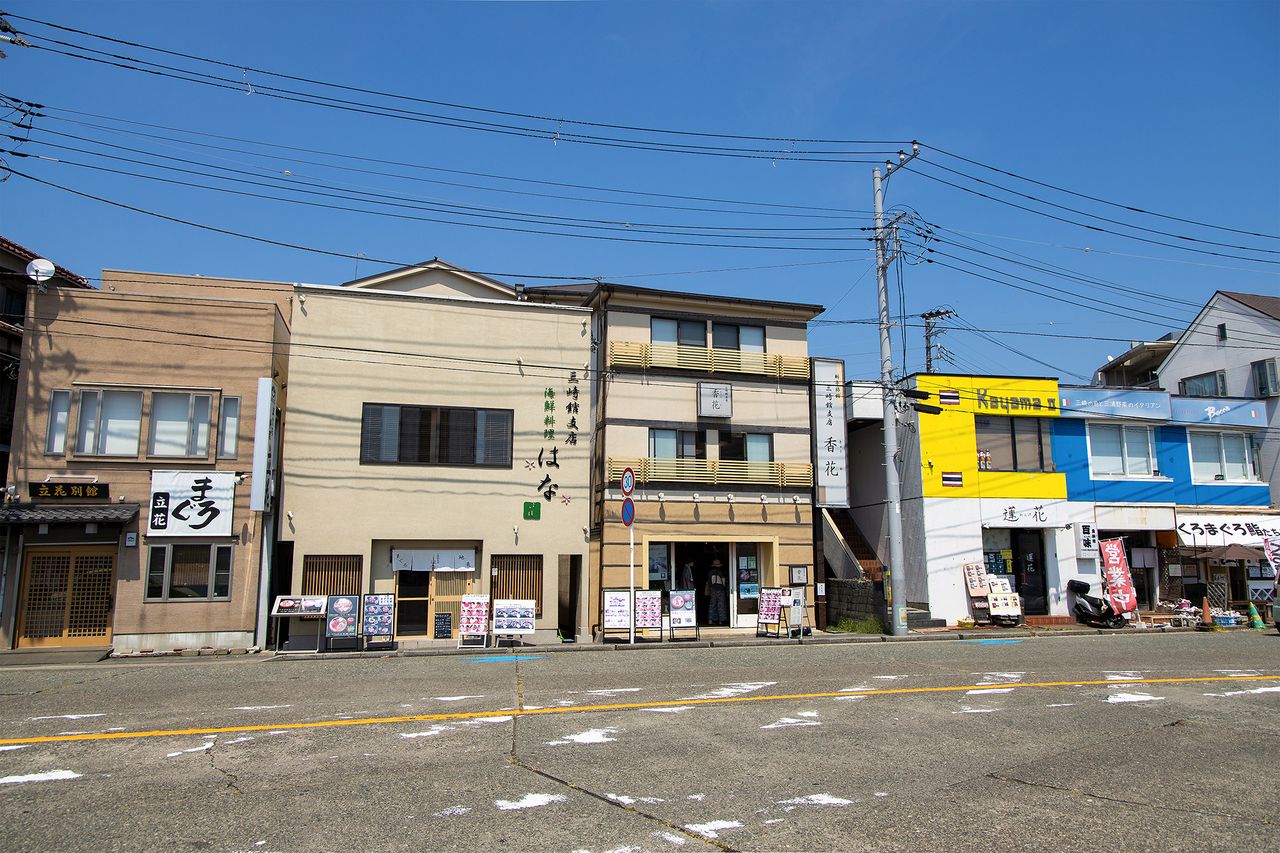 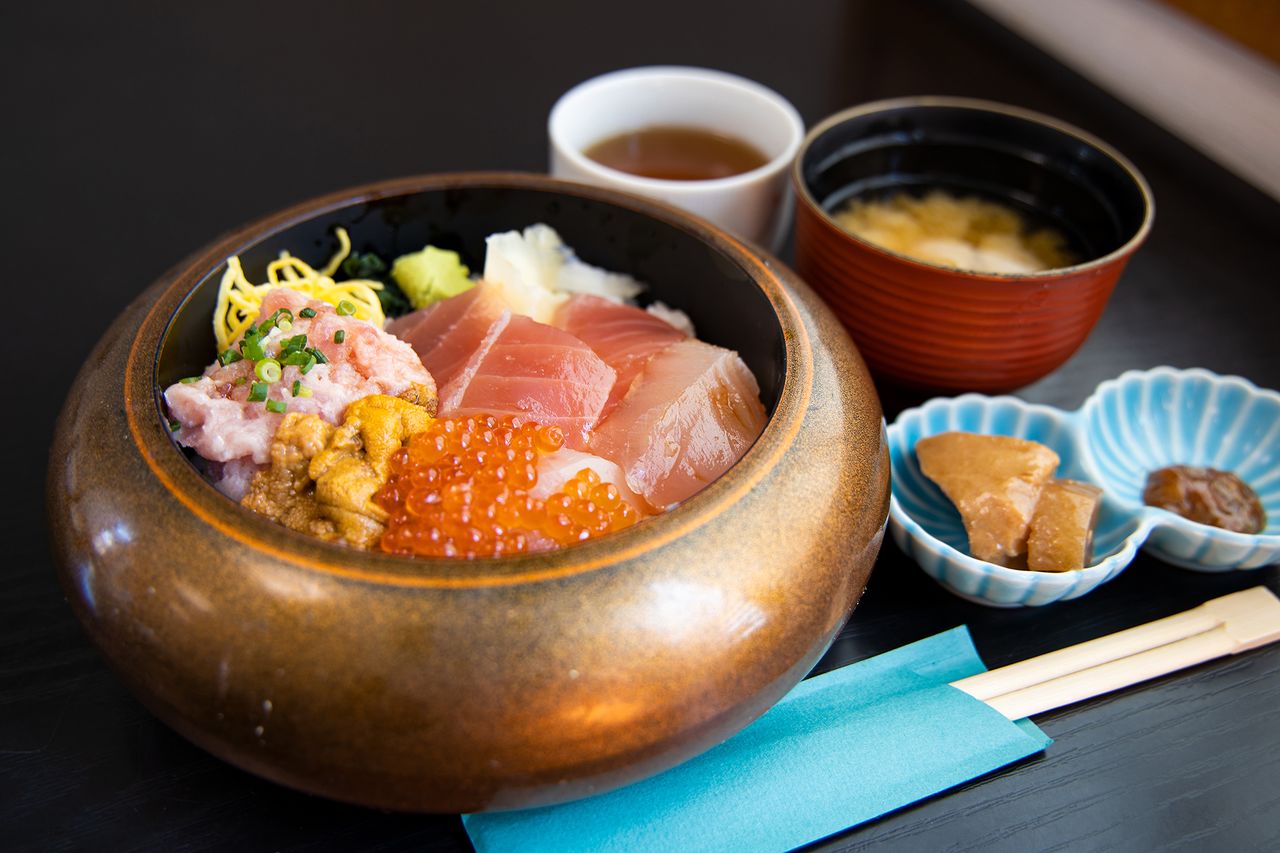 A bowl of fresh sea urchin, roe, and tuna on rice is part of the special menu at the restaurant Kyōka and can be purchased with the meal coupon or separately for ¥2,100.

Visitors can use the leisure facility and souvenir ticket to purchase local delicacies, ride on the Nijiiro Sakanagō, take the ferry to Jōgashima, rent a bicycle, or even enjoy a bath at the Aburatsubo hot springs. Cycling around the town of Misaki, along the coast, and through cultivated fields is a popular way to enjoy the area. The ferry ride to Jōgashima offers magnificent vistas. 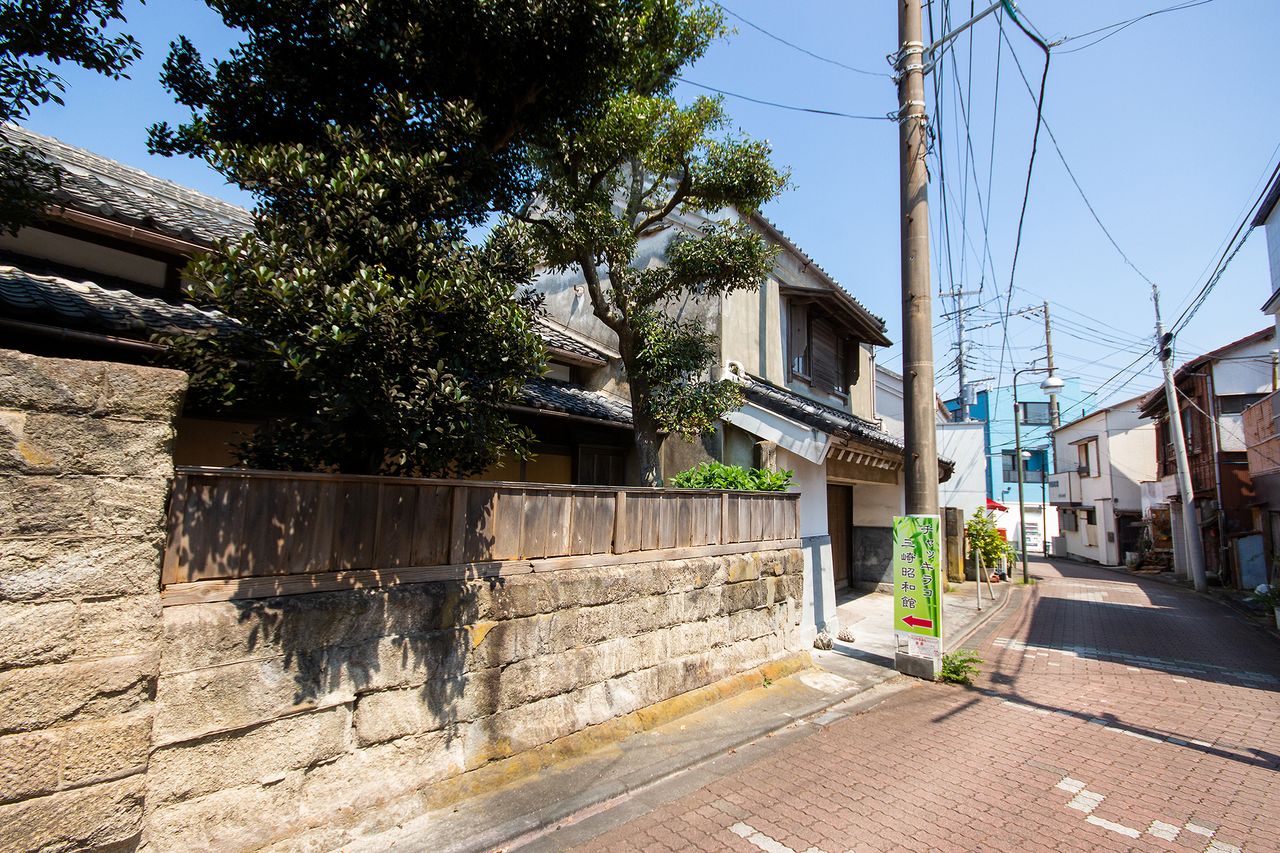 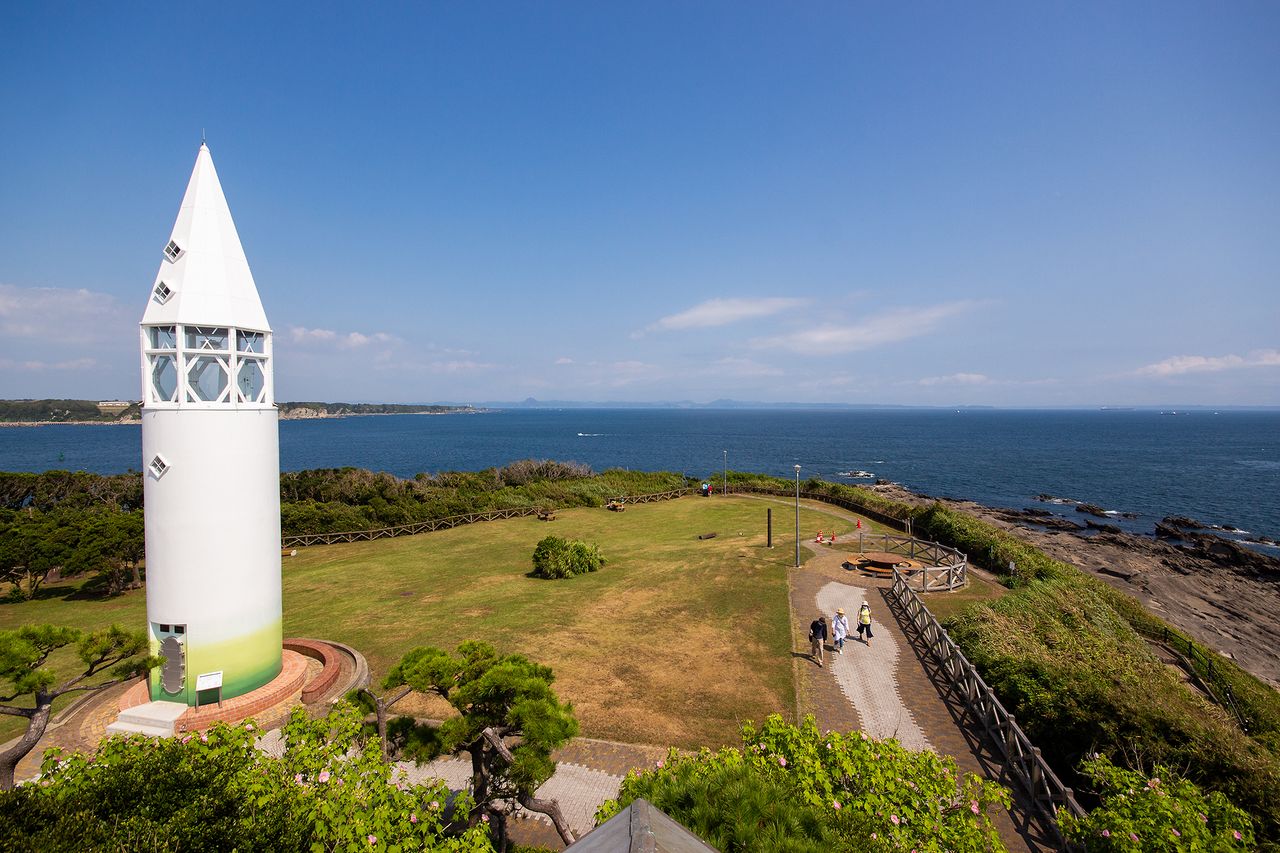 On a clear day, the Bōsō Peninsula across Tokyo Bay in Chiba Prefecture can be seen from Jōgashima Park. 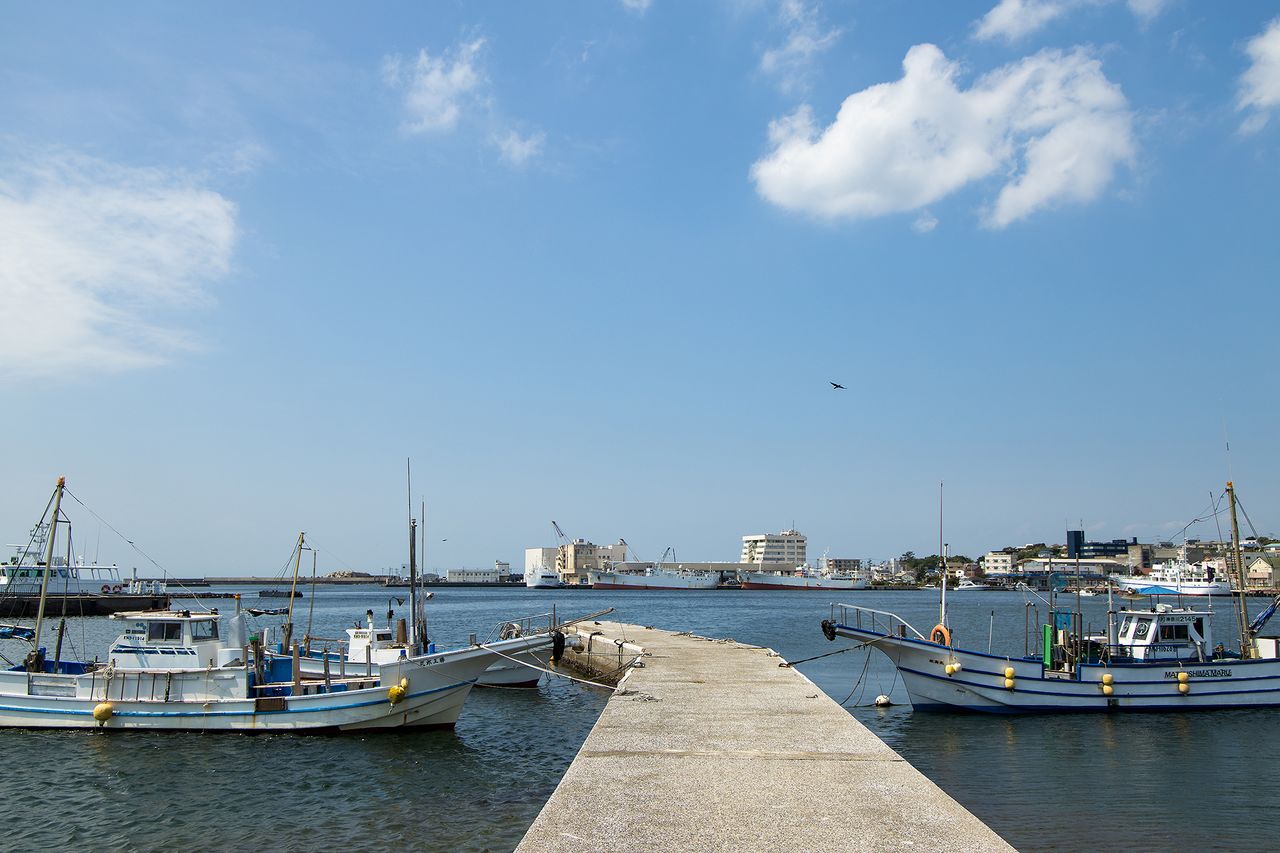 (Originally published in Japanese. Photos by Nippon.com, unless otherwise noted.)