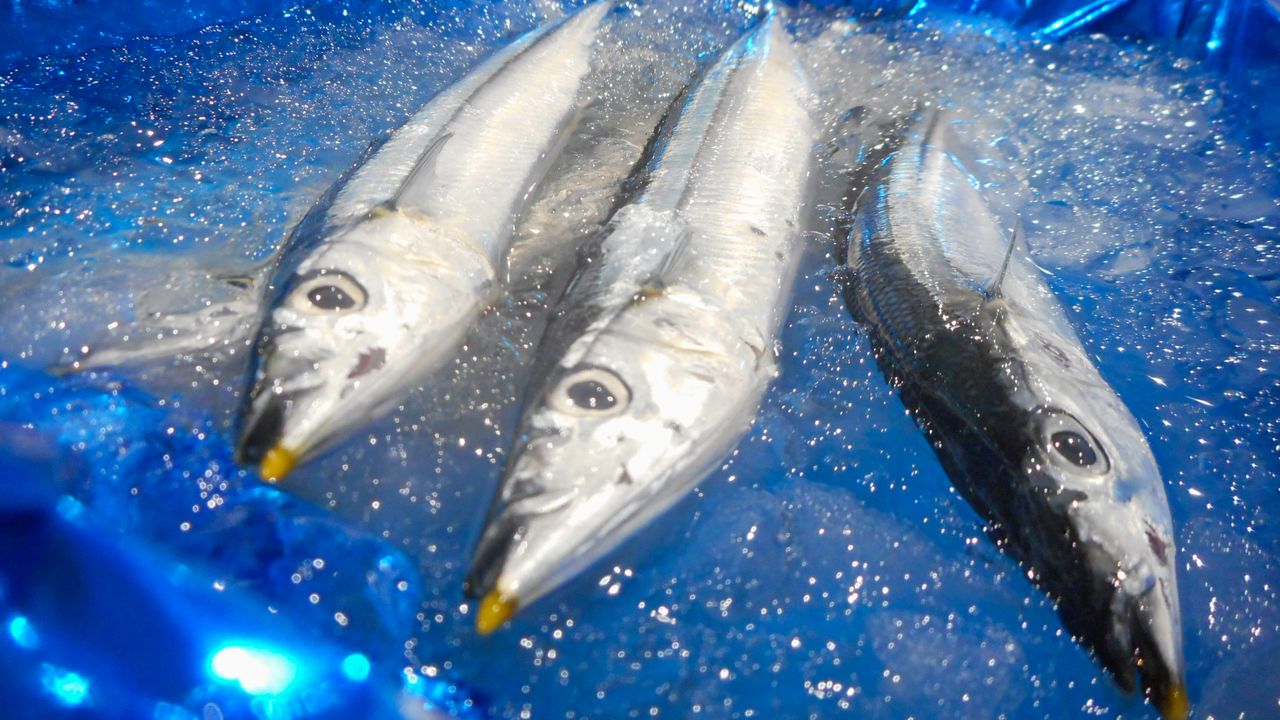 Food and Drink Lifestyle Oct 23, 2020
The past few years have seen poor catches of Pacific saury, driving up prices and leaving consumers who relish the autumn treat scrambling to find quality fish at reasonable prices.

Catches of sanma, traditionally an autumn staple in Japan, have plummeted over the past few years. The fish, known in English as the Pacific saury, usually travel offshore of eastern Japan during the fall, but have remained further out to sea over the last several seasons. Fishing fleets are struggling to locate the widely dispersed schools and are bringing back meager hauls. Poor catches have driven up saury prices, putting what has long been a familiar treat out of reach for many households. Fisheries and seafood distributors are hoping that catches will recover soon.

The saury fishing season began in early July for small vessels, and midway through the month the sparse hauls were selling for an eye-popping ¥100,000 per kilo, or ¥12,500 per fish, at Tokyo’s Toyosu Fish Market. Most of the fish were bought up by high-end sushi eateries in Taiwan, while some went to sushi restaurants in Ginza and other parts of Tokyo. 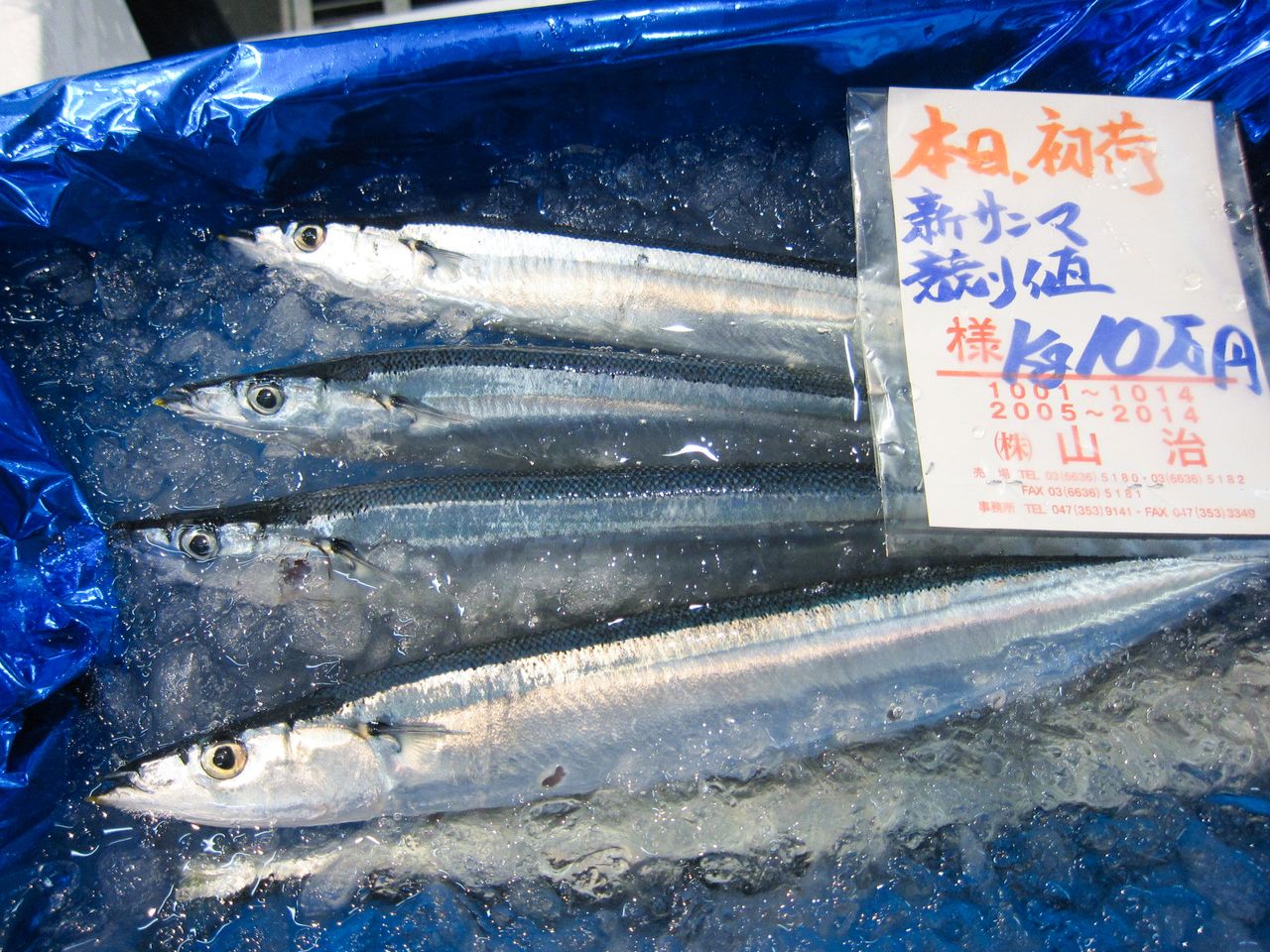 Catches gradually increased from summer to autumn, and by early September fresh saury had begun appearing in supermarkets in Japan for around ¥350 per fish. However, customer who were willing to shell out these higher prices were not getting much for their money, the fish being so thin that they were hard to distinguish from small varieties of barracuda and garfish. Sharp-eyed shoppers may spot fatter, more reasonably priced saury, but closer inspection will reveal the bigger fish as frozen stock from last year’s haul that have been defrosted for sale.

Wholesale seafood buyers point out that while consumers prefer fresher fish, last year’s catch is of higher quality than this season’s haul, which is characterized by smaller fish that are less plump. The fattiness of the saury makes all the difference to sanma lovers, who will eat the entire fish, right down to the slightly bitter-tasting innards. 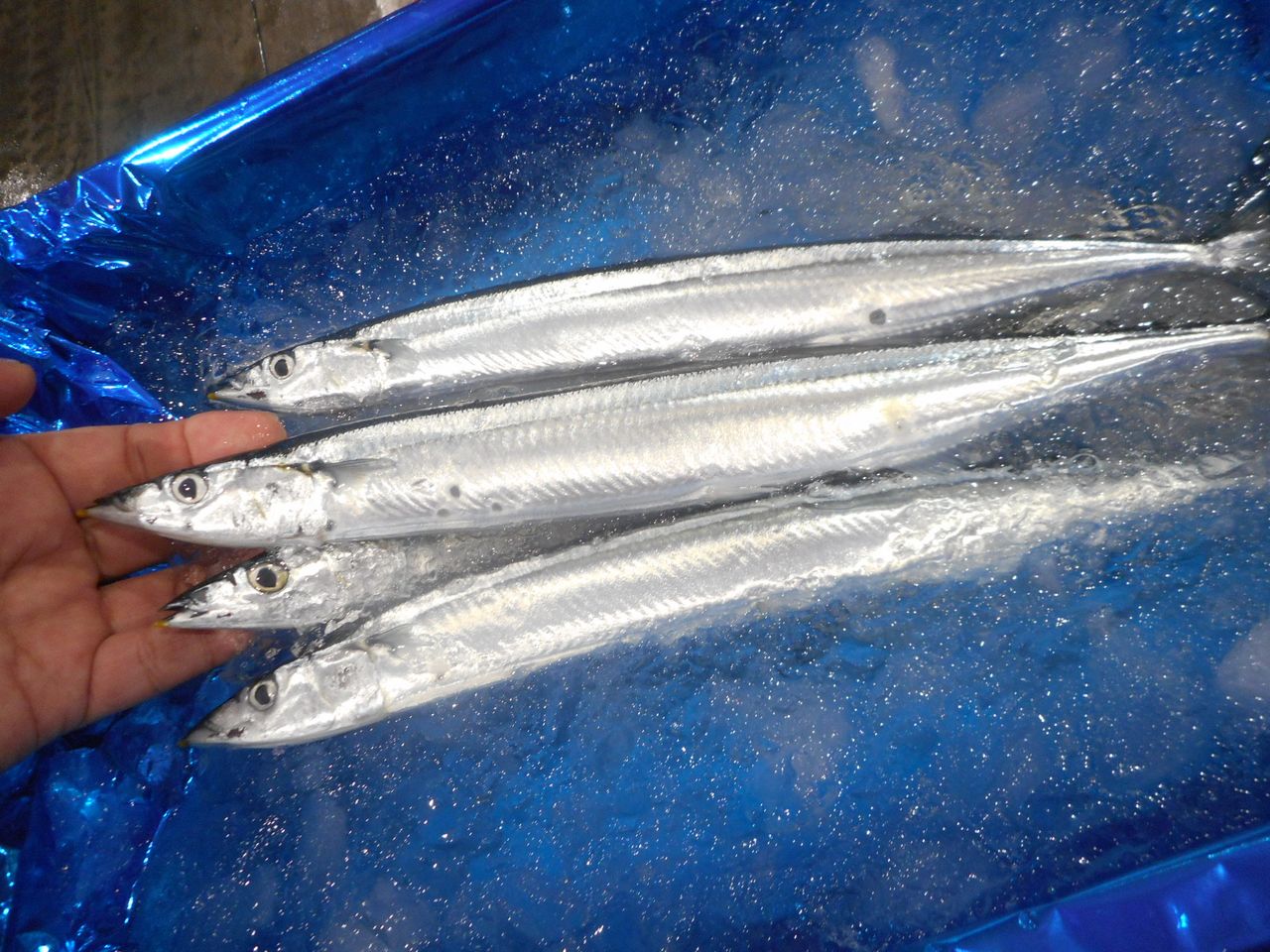 Catches of Pacific saury are sourced either as fresh-caught fish and sold in season or frozen for later consumption, such as at restaurants that offer set meals featuring salt-grilled sanma year-round.

Given the poor catches this year, many supermarkets are dipping into last year’s reserves of frozen saury. This has helped keep the fish on people’s tables regardless of the meager hauls, but an auctioneer at the Toyosu market commented that plump specimens of a good size for salt-grilling are in short supply.

Ministry of Agriculture, Forestry, and Fisheries show stocks of frozen saury around the country at 7,000 tons, or nearly half the amount compared to last year. Poor catches last season also forced suppliers to rely on frozen fish to keep up with demand, diminishing stocks to their current levels. One Toyosu distributor points out that larger, high-quality saury that are comparable to freshly caught specimens are becoming scarce.

In light of dwindling supplies of frozen fish, people in the industry are pinning their hopes on catches improving. This is in spite of the Fisheries Agency predicting at the end of July that this year’s haul would be even lower than last year, which was the worst in the past 70 years. Few schools of saury have formed in coastal waters, and the ones that have are made up of smaller fish. According to the National Saury Fishery Association, the total catch for August this year was under 200 tons, less than a fifth of the 1,000 tons recorded the same month in 2019 and a mere 2% of the 9,000 tons caught in 2018. Hauls in succeeding months are also likely to be poor. 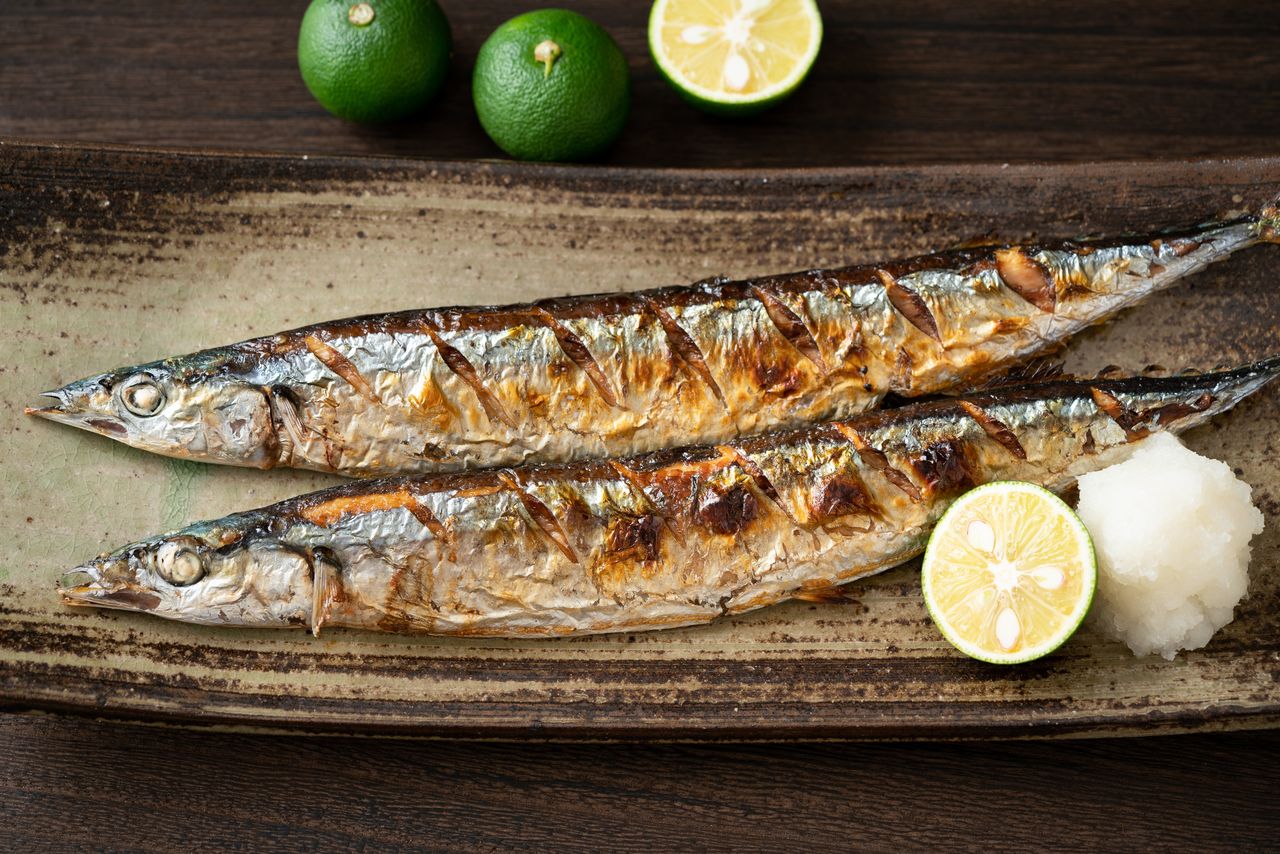 Even after the pandemic-related state of emergency declared in April was lifted in May, people have been spending more time inside to avoid contracting COVID-19. Consequently, people are eating out less frequently—or not at all—and are wanting to enjoy small luxuries at home like juicy, salt-grilled saury. Fishery officials say that although hauls remain low, boats since September have been netting fatter fish.

According to a veteran wholesaler at the Toyosu market, the best way to choose the freshest, tastiest saury is to look for a spot of yellow on the fish’s lower jaw and glistening silvery scales. When the fish is past peak freshness, the yellow spot fades, the scales lose their luster, and the eyes become bloodshot. Market hands agree that the best fish have arched backs, a sign that the flesh is fatty and tasty. 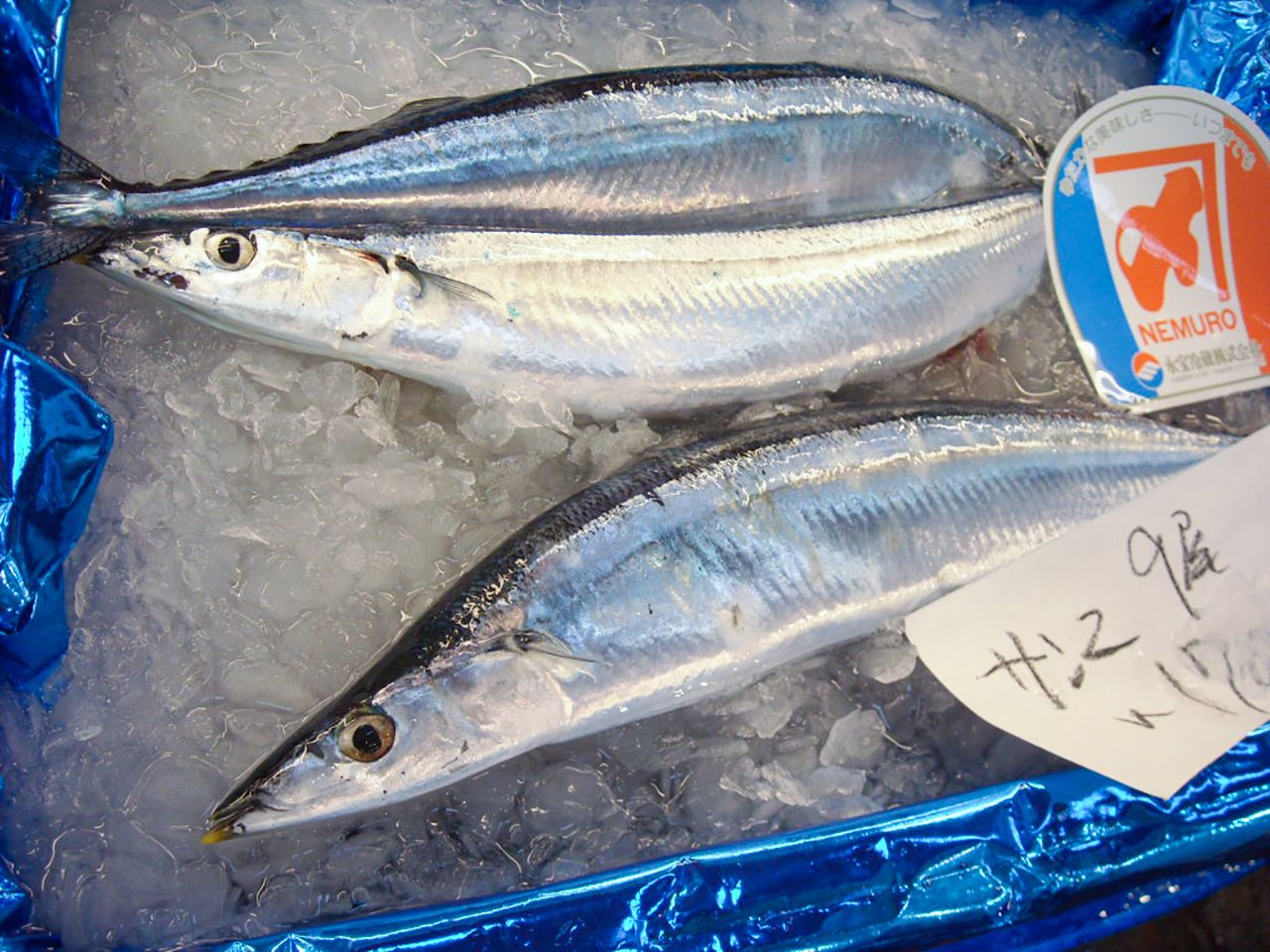 An arched back is a sign of a good quality fish. (Photo courtesy of the author)

The reasons for the fall in Pacific saury are unclear, but experts suspect that it is due to changes in the ocean environment like higher water temperatures, or foreign fishing fleets swooping up fish in the open seas.

While conditions have been dismal this season so far, the Fisheries Agency believes that catches may increase after late October if fish start forming schools in fishing grounds off the Sanriku Coast in the northeast of the country. Since hauls of other seasonal fish like salmon, squid, and autumn bonito have also been poor, fishing ports and large and small wholesale fish markets throughout the country are pinning their hopes on saury catches recovering. 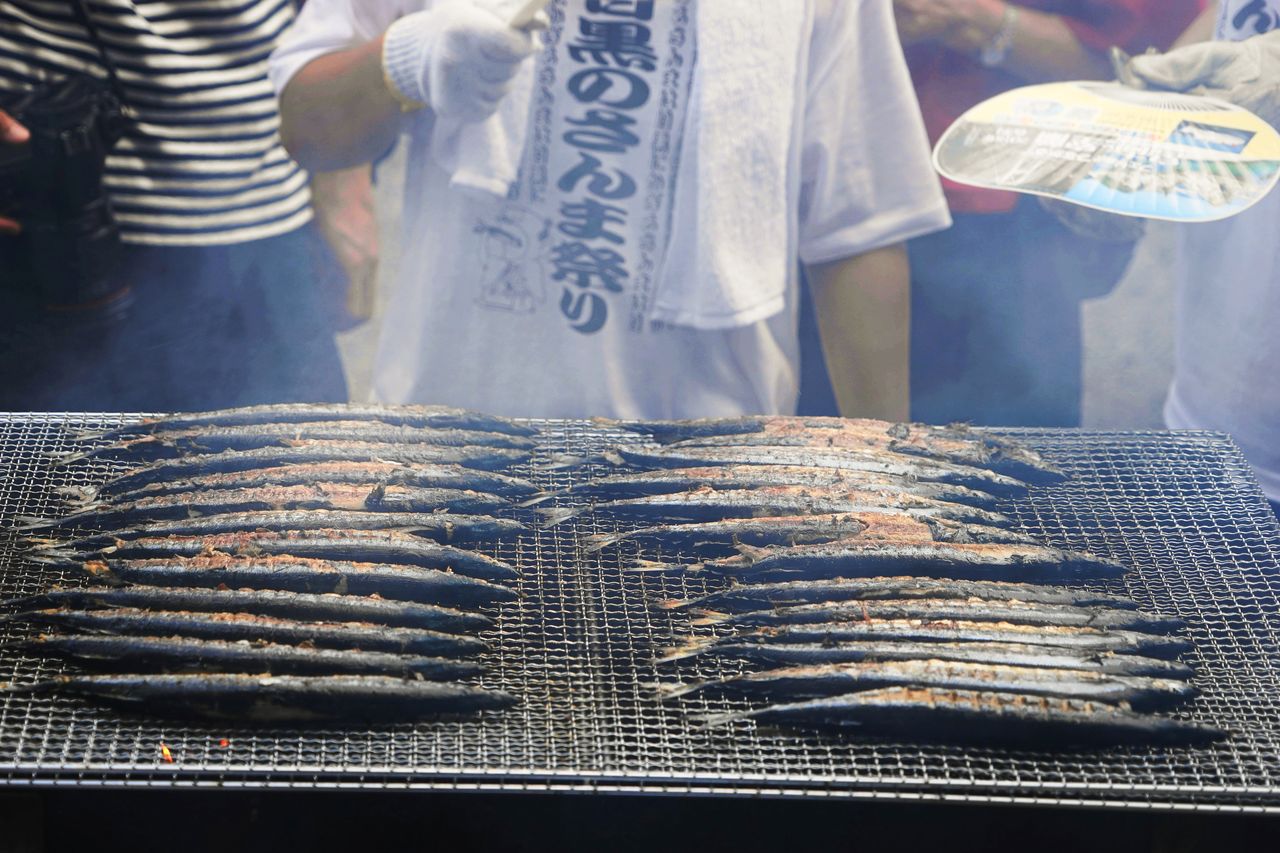