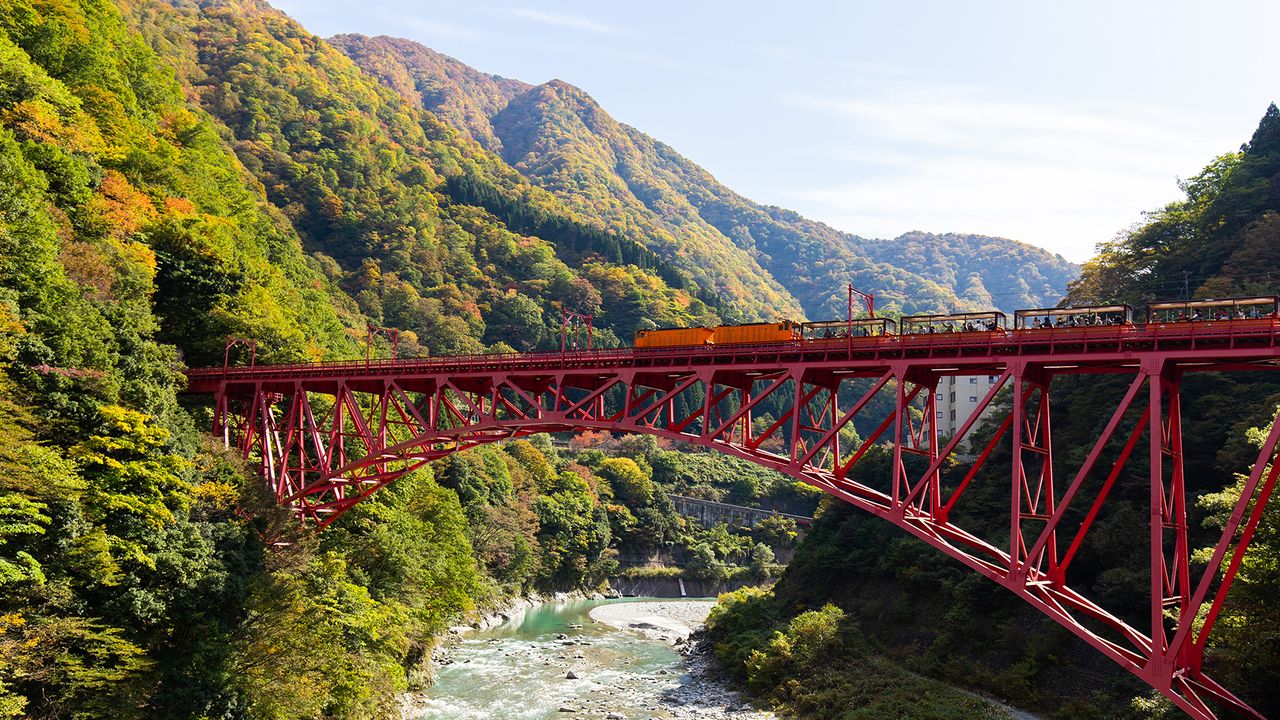 Travel Jan 1, 2021
The open-air trains of the Kurobe Gorge Railway plunge riders into scenes of stunning natural beauty on a route that is dotted with steaming hot springs and breathtaking vistas.

The Kurobe Gorge in Toyama Prefecture is one of Japan’s top scenic spots. Visitors to the area can enjoy the surrounding beauty in the open-air trains of the Kurobe Gorge Railway. The line runs some 20 kilometers from Unazuki Station at the north end of the gorge to Keyakidaira Station at the south. The trip whisks riders along a route dotted with features like sheer rock faces, towering peaks, and railway bridges hovering tens of meters in the air. Every time the train emerges from a tunnel, an exciting new vista is revealed. 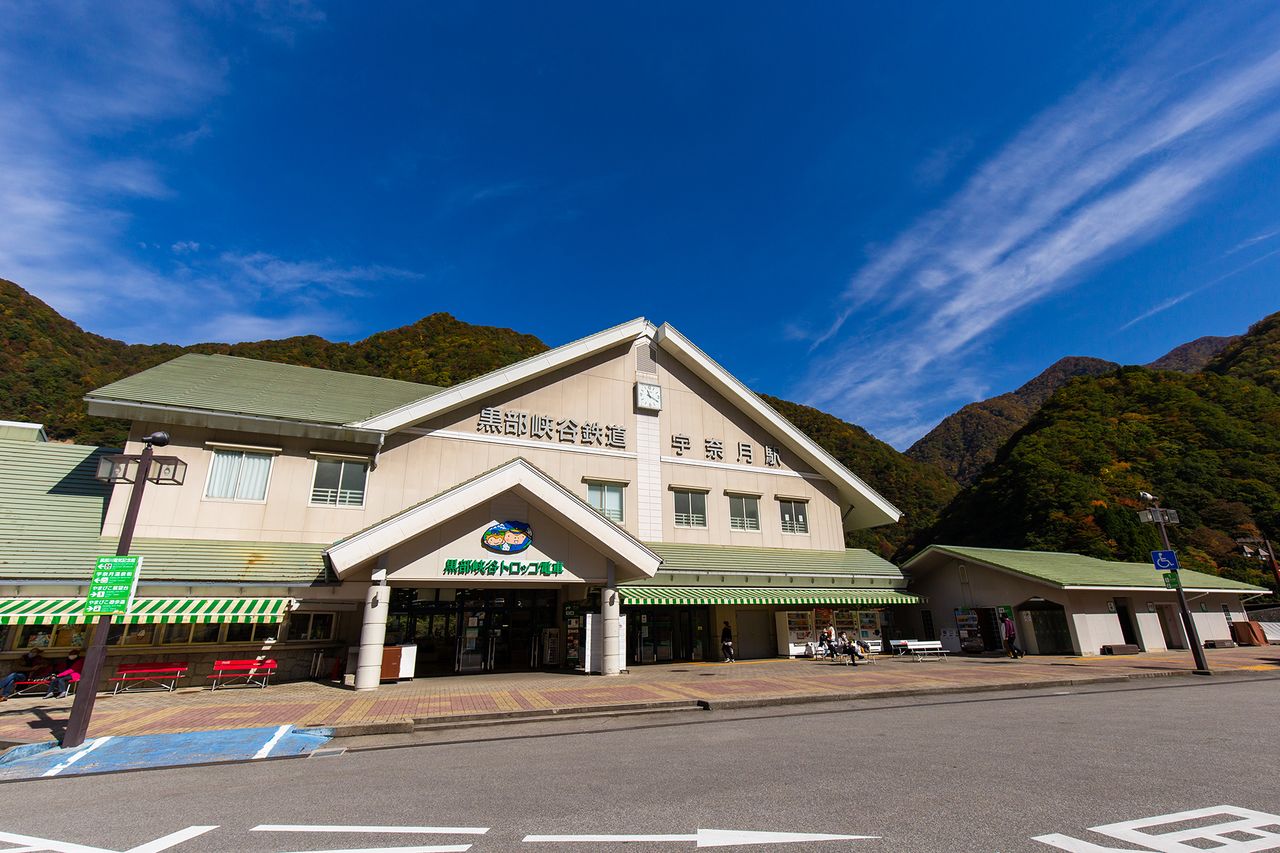 Unazuki Station is a five-minute walk from Unazuki Onsen Station on the Toyama Chihō Railway. 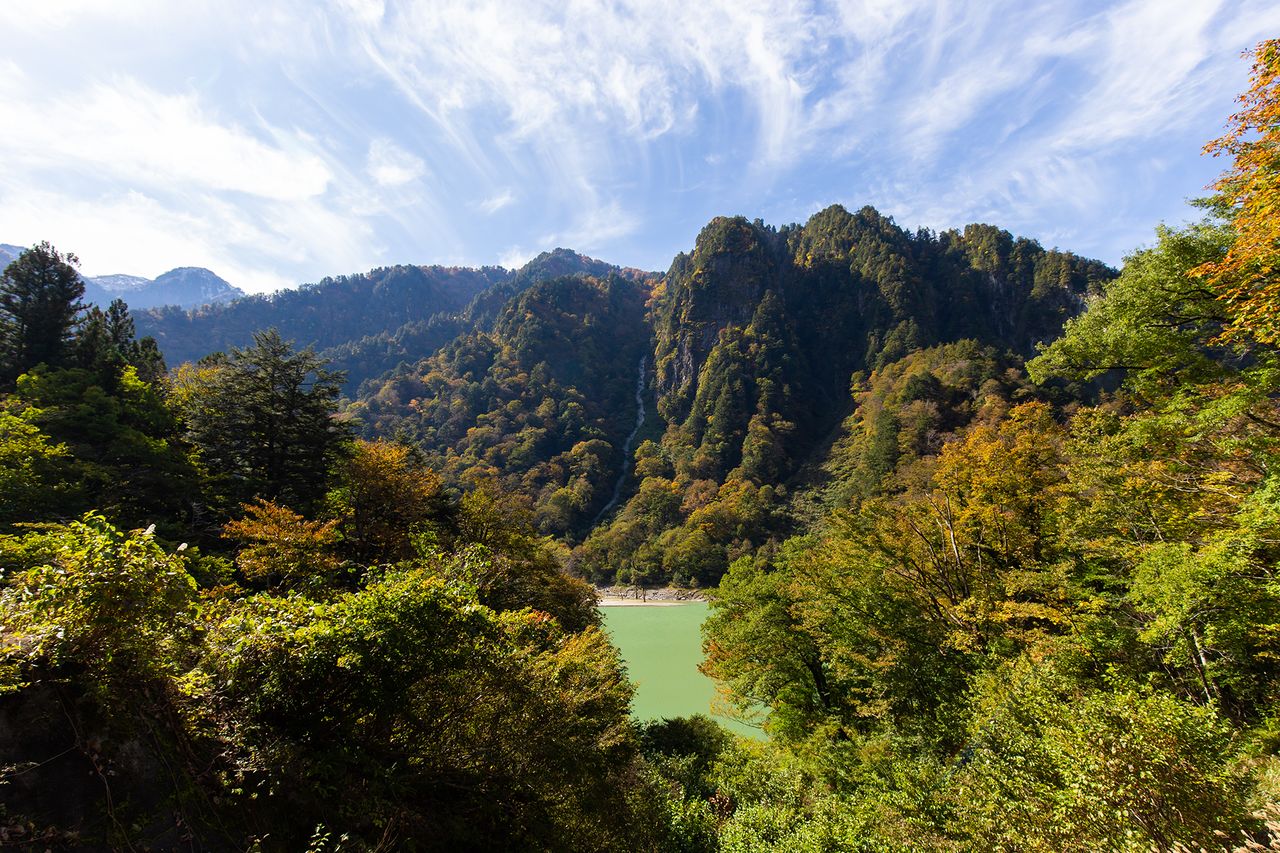 The six peaks of Dashiroppō visible in the distance.

The gorge was carved by the Kurobe River that runs between the Tateyama mountain range, known for peaks like Mount Tsurugi and Mount Yakushi, and the Ushiro Tateyama mountain range, home to Mount Hakuba. The deep, V-shaped valley, with its emerald-green river and dense forests, boasts an elevation difference of 3,000 meters end to end. It is considered to be one of Japan’s “three great gorges”—the other two being Kiyotsu Gorge in Niigata Prefecture and Ōsugidani Gorge in Mie Prefecture.

Passengers on the Kurobe Gorge Railway can choose between open-air cars and enclosed carriages. However, Nishida Yoshihiro of the railway’s public relations department says that the open-air cars are the best way to enjoy the scenery, although he suggests that riders bring a jacket as the many tunnels the train runs through are chilly. Having enjoyed the open air, riders may wish to sit in the more comfortable enclosed cars on the return leg. 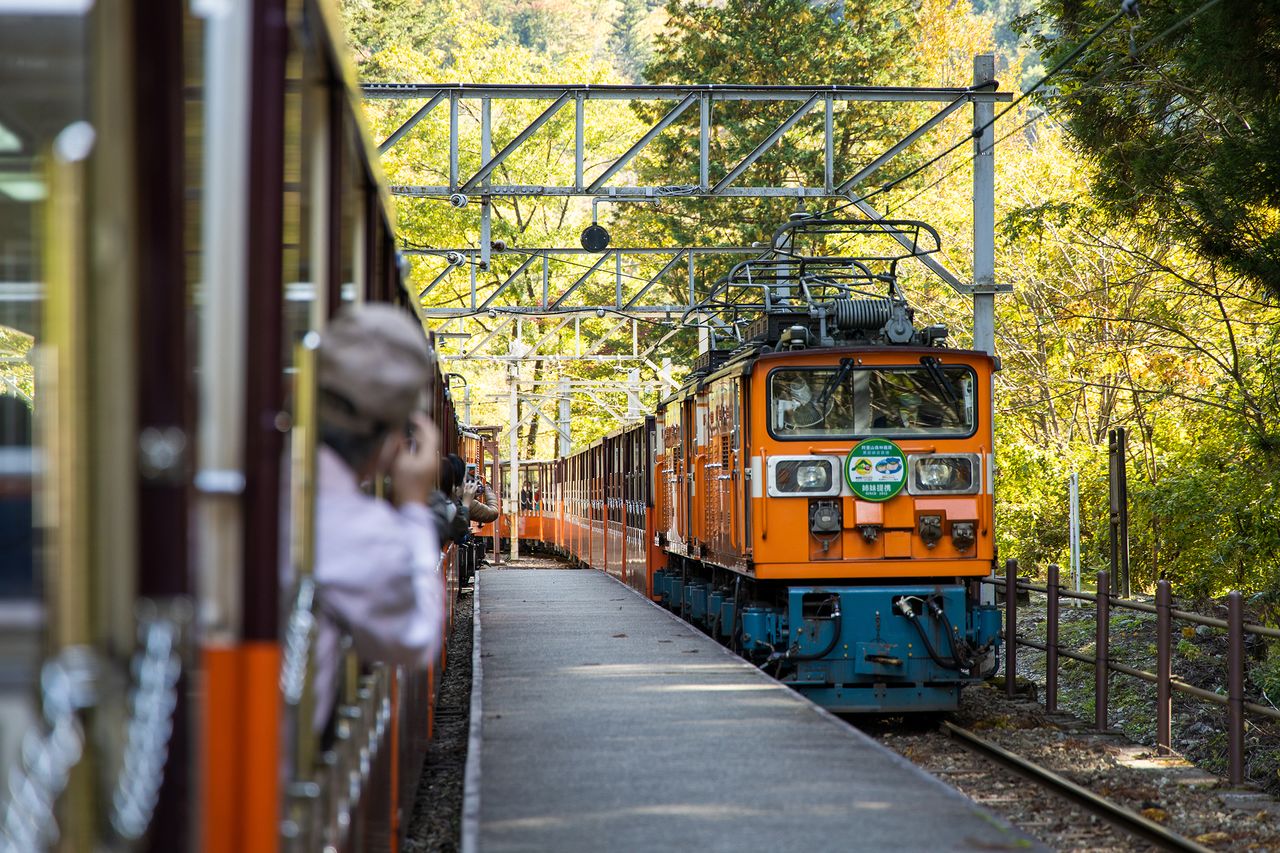 Shutterbugs love to photograph the scenic train as it lumbers by. 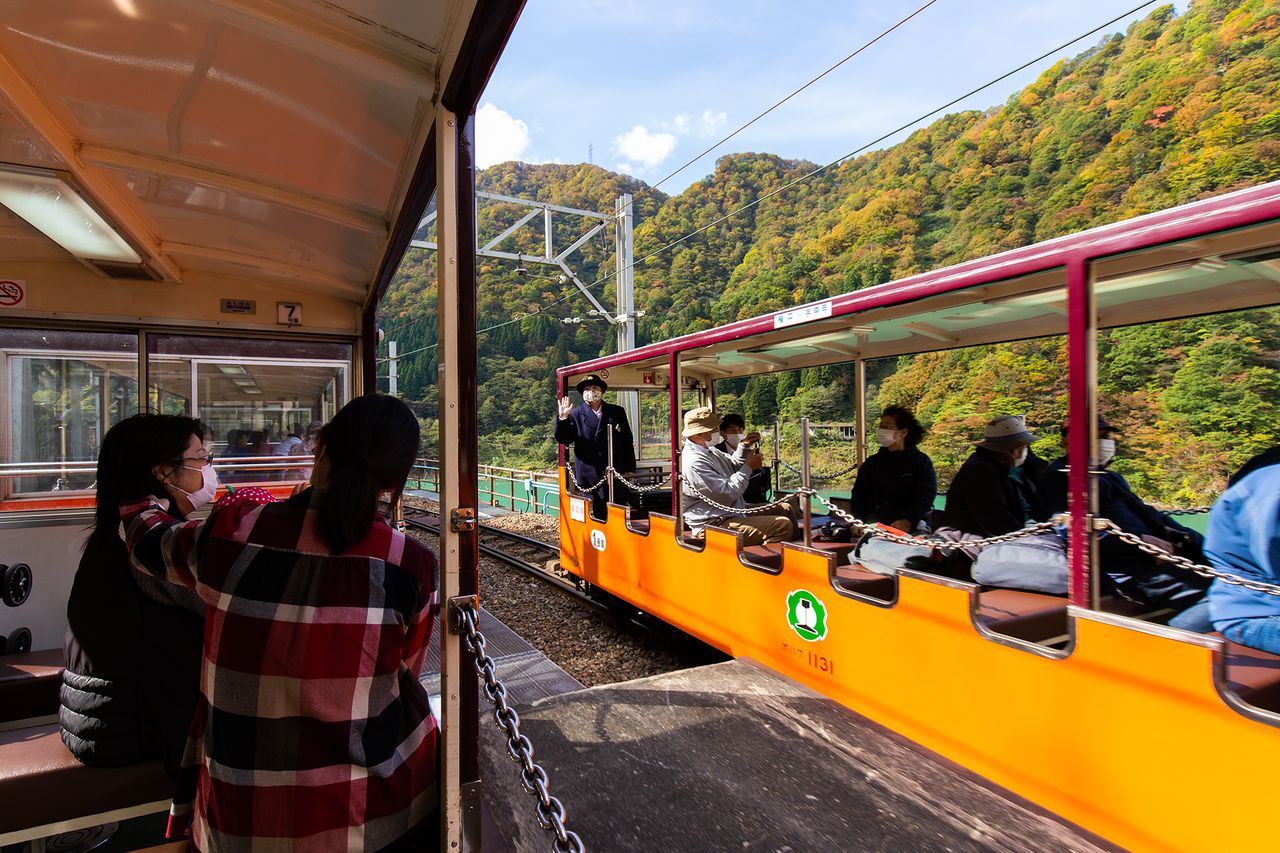 The open-air cars are popular with sightseers. 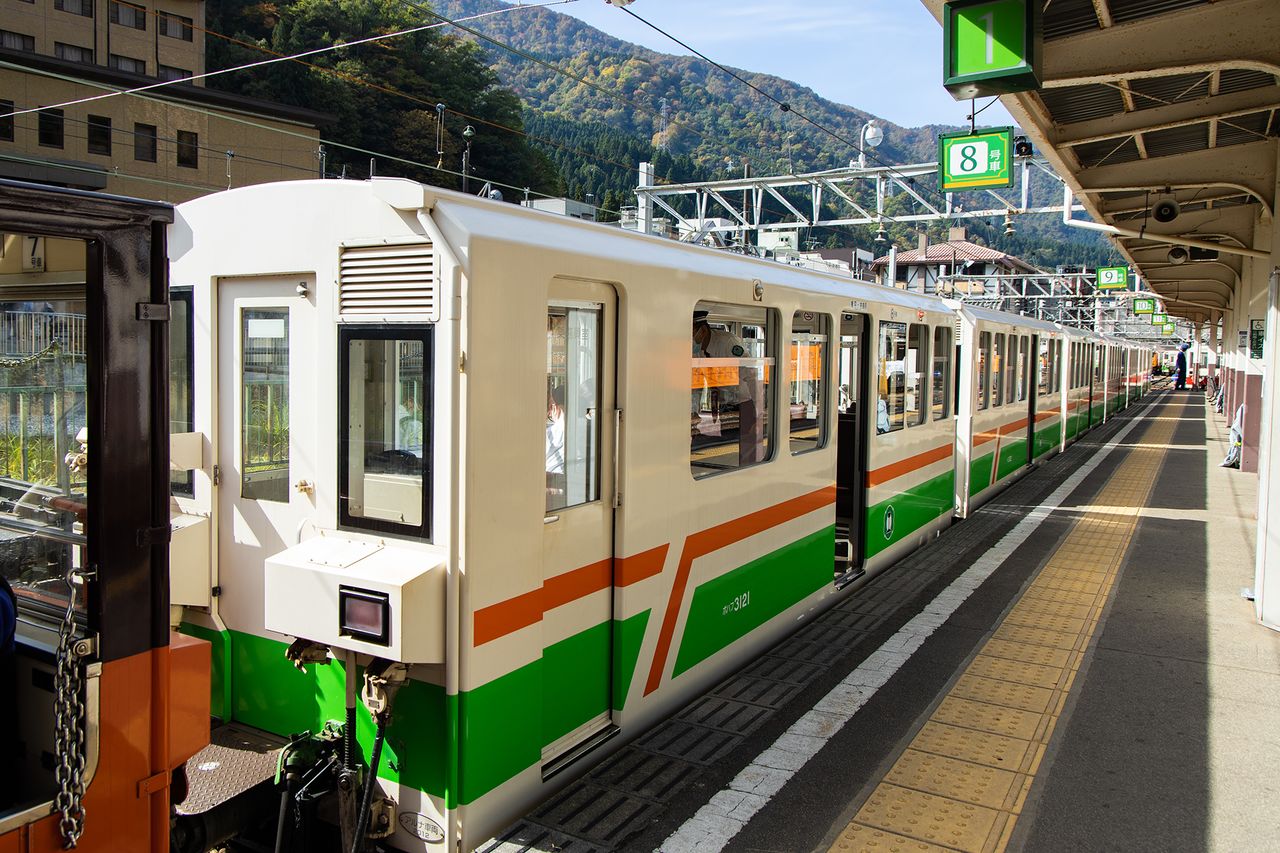 The enclosed “relax” carriage, with its rotatable seats, keeps passengers warm in cold weather as they view the sights.

From Workhorse to Tourist Train

Unazuki Station has several nearby scenic attractions, including the Yamabiko trail. The walking path takes sightseers across a bridge, from where they can observe trains crossing the Shin-Yamabiko Bridge that spans the valley. Visitors can also enjoy the picturesque scene from the Yamabiko lookout at the far end of the station’s parking area. It is a favorite spot among photographers, who wait patiently to snap a photo of trains emerging onto the bridge from an adjacent tunnel.

Unazuki Station has a food court, cafe, and souvenir shop. There is also a display on the second floor that details the history of the Kurobe Gorge Railway. 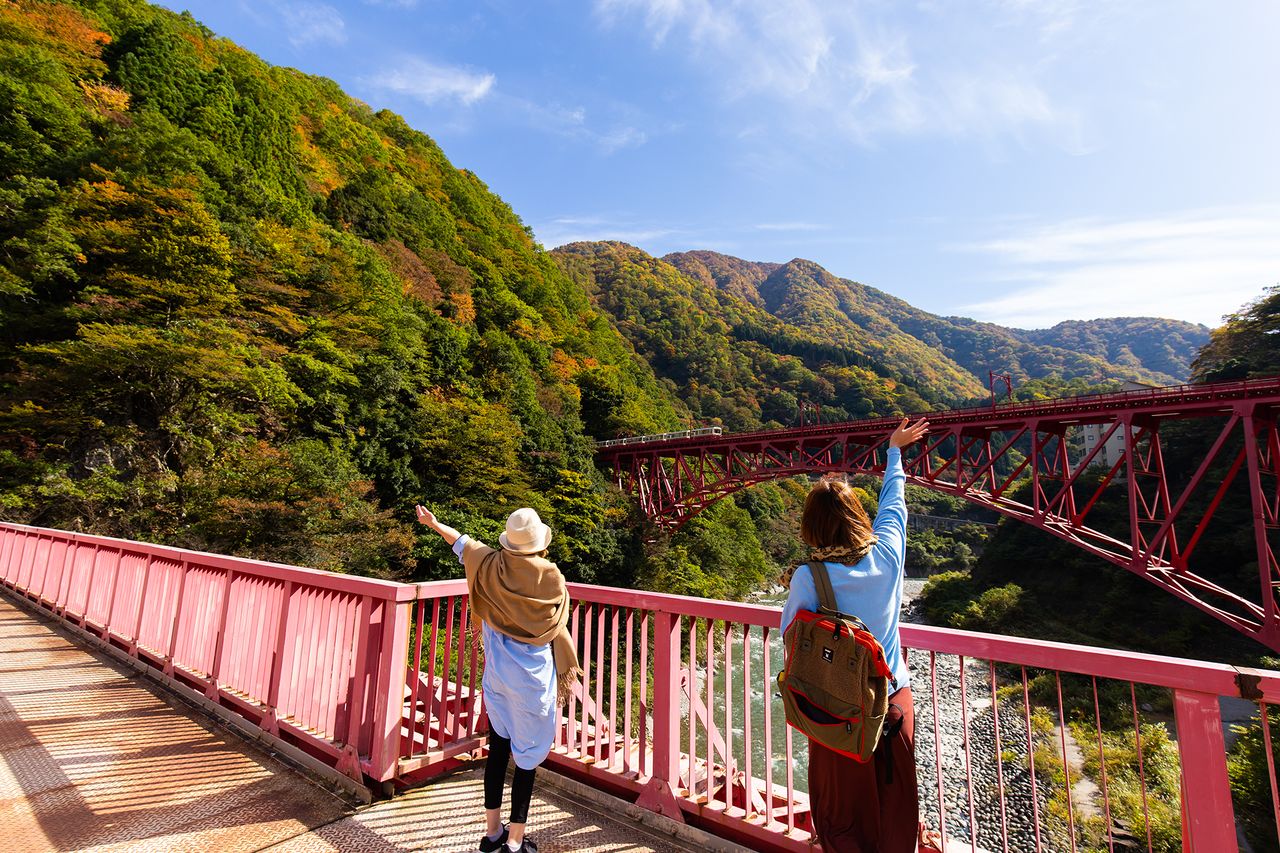 Sightseers wave to the train crossing the Shin-Yamabiko Bridge. 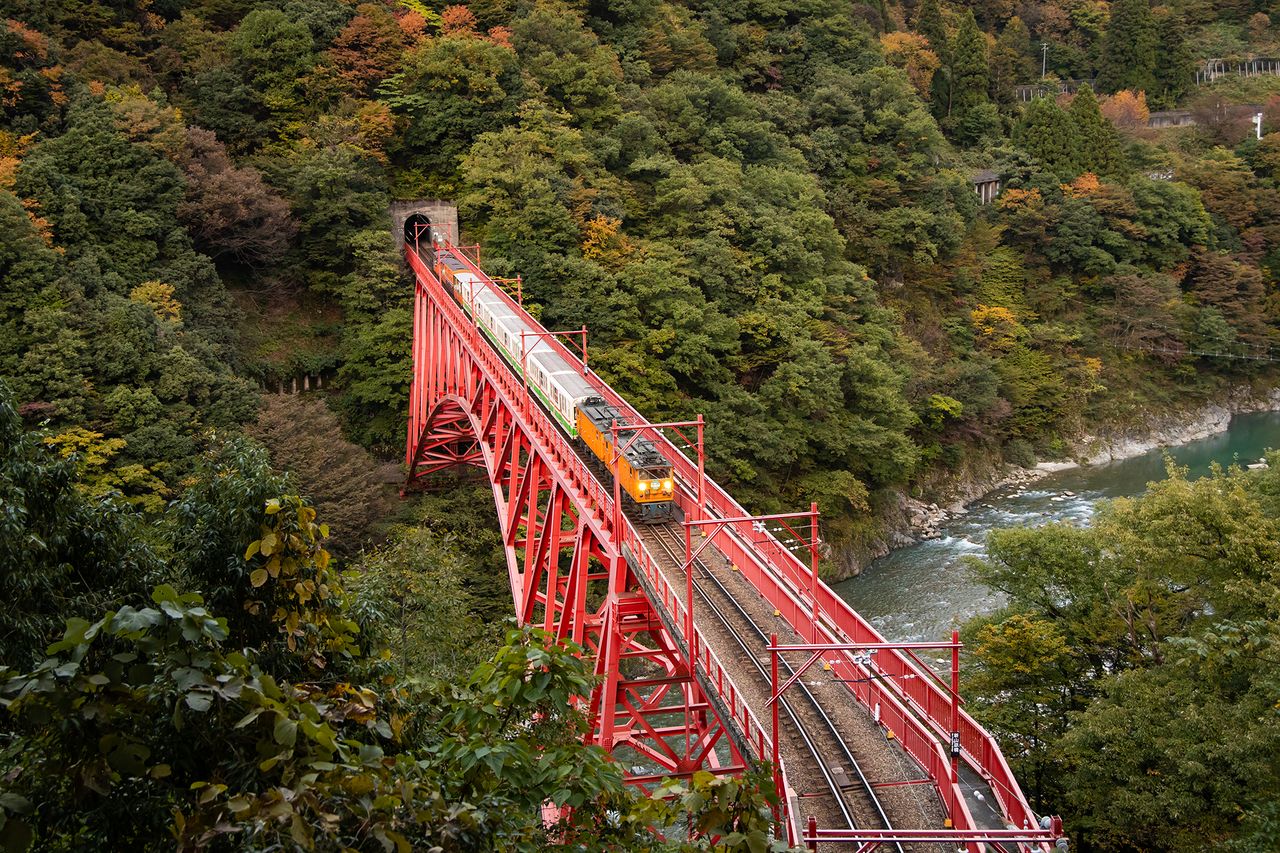 A view of the train from the Yamabiko lookout. 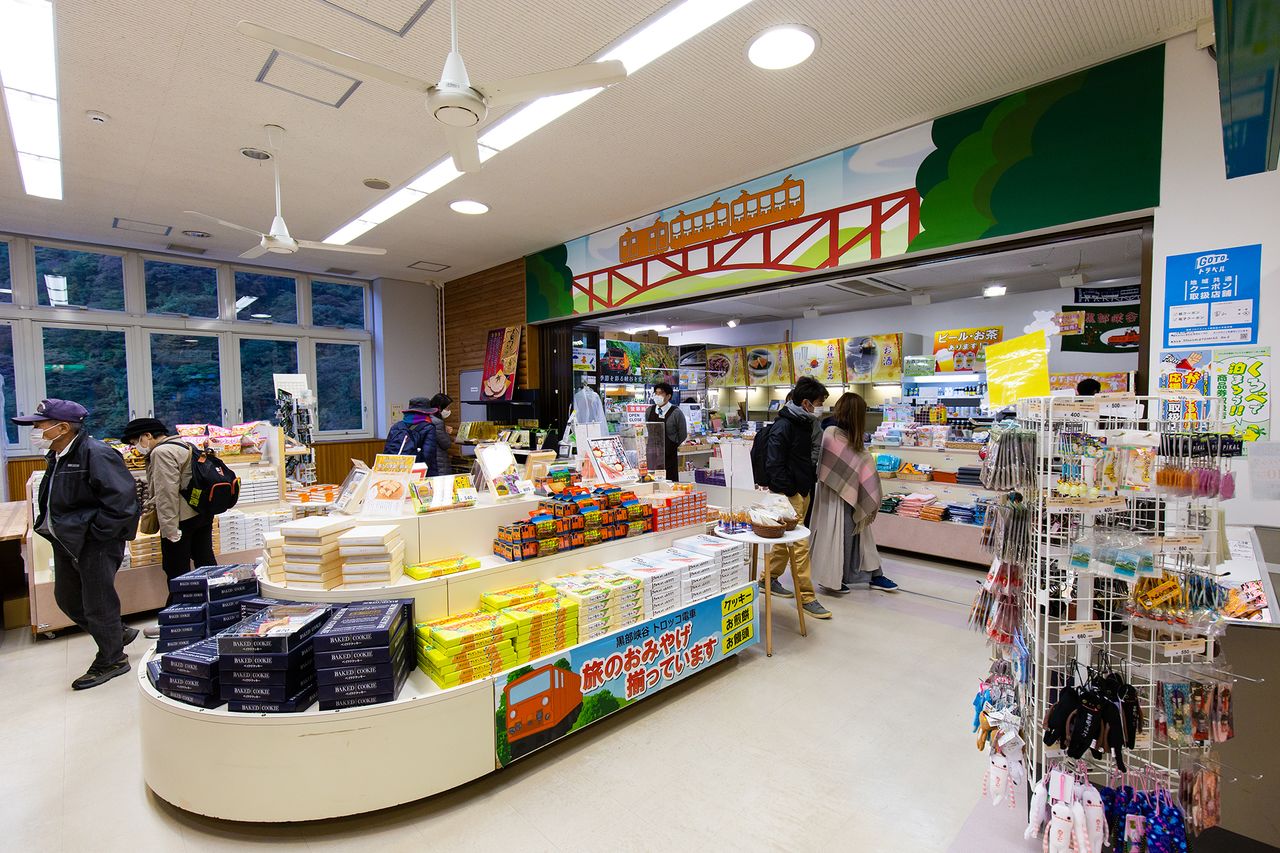 The souvenir shop has plenty of train-themed merchandise. 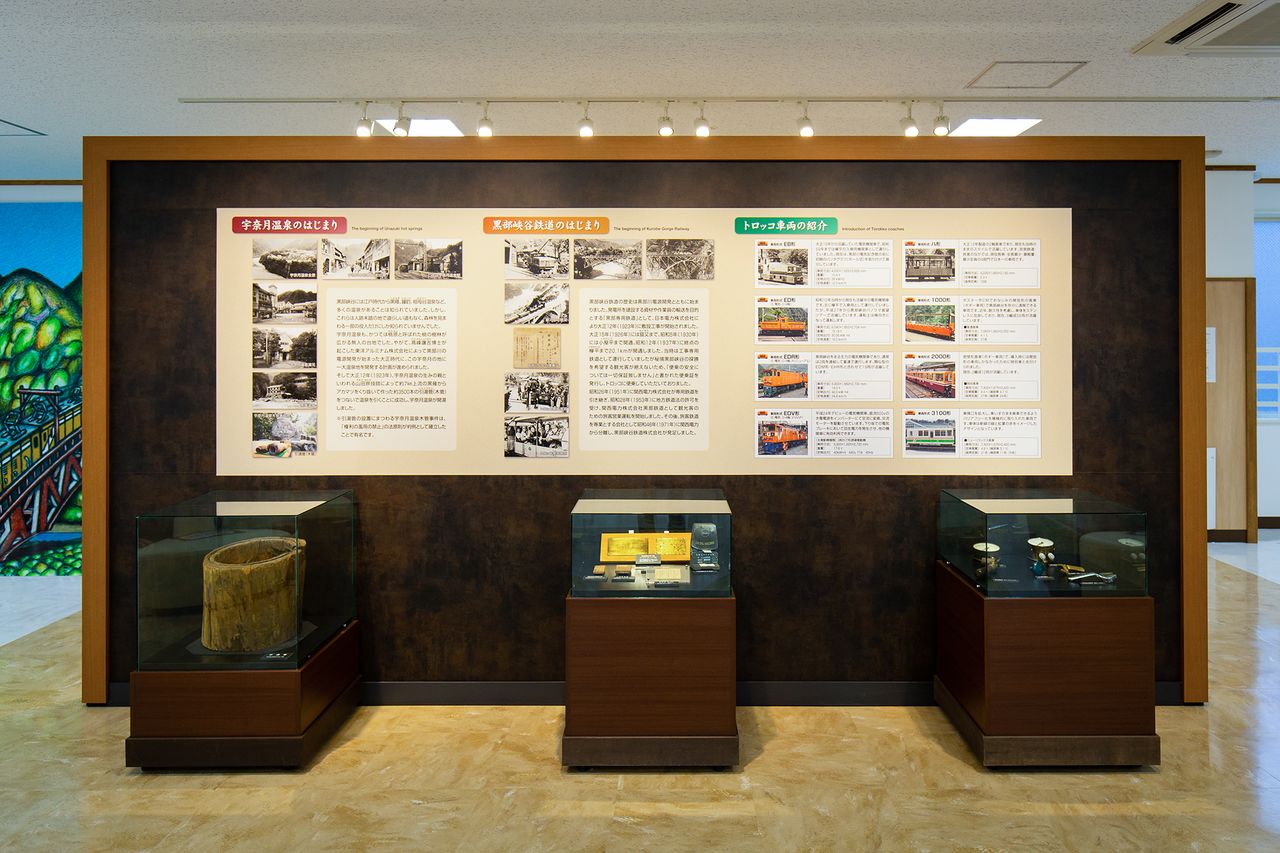 An exhibit on the second floor of Unazuki Station traces the trainline’s history.

The Kurobe Gorge Railway was initially constructed to haul materials for building hydroelectric power plants along the river. But as word spread of the scenic views to be had on the route, it was later repurposed to carry tourists.

There are several hydropower facilities on the Kurobe River, the most famous of which is the Kurobe Dam on the very upper reaches of the waterway past Keyakidaira Station. The first sections of the trainline opened in 1926, but it was not until 1937 that the entire route between Unazuki and Keyakidaira Stations went into operation. 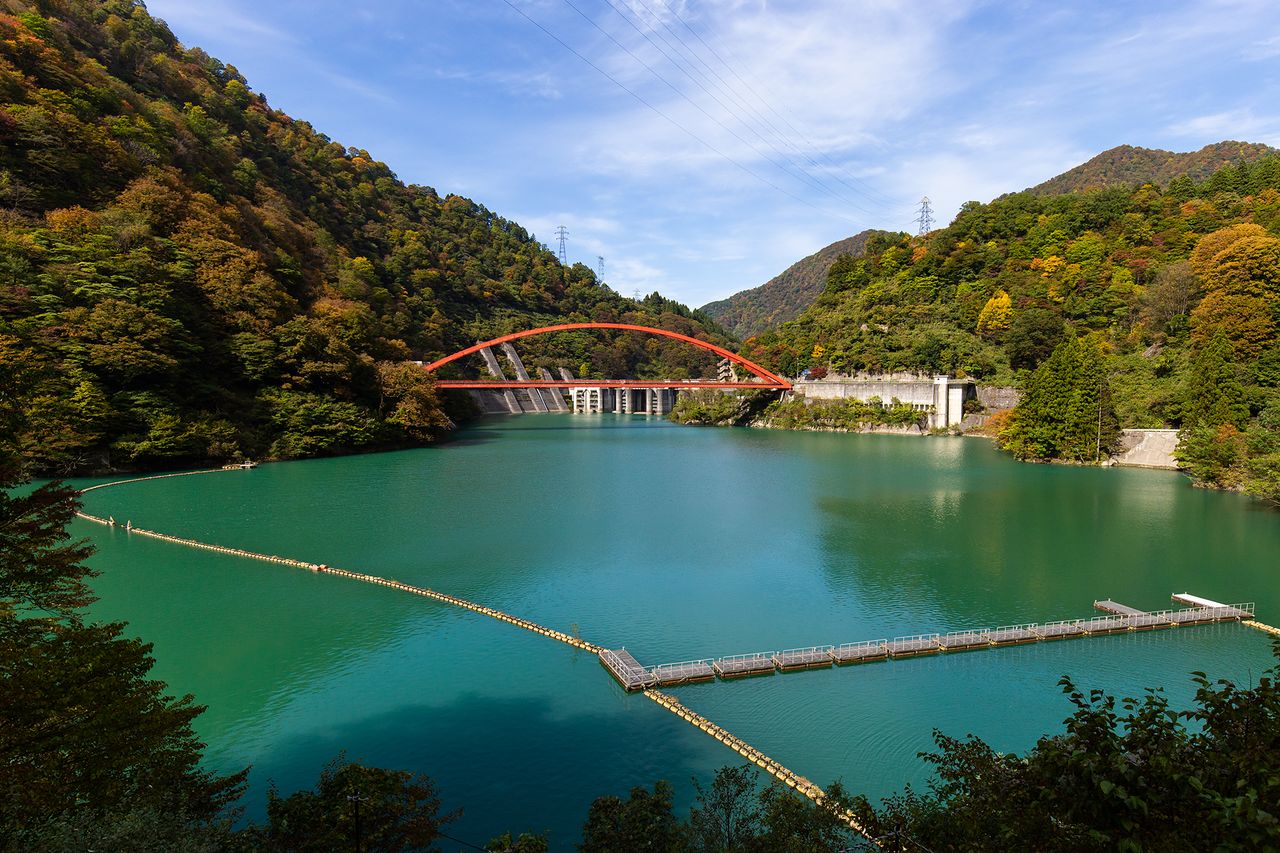 The Unazuki Dam, one of several hydropower plants along the line, and its reservoir are a short distance from Unazuki Station.

Initially, local resident were able to ride the line free of charge, but as word of the stunning views along the route spread, operators of the railway turned their eyes to the area’s tourism potential. In time, the line began attracting droves of mountain climbers and travelers headed for nearby hot springs. As ridership increased, the railway decided in 1929 to charge fares. However, as the line’s main purpose remained transporting building materials, tickets warned passengers that the railway assumed no responsibility for their safety.

Following World War II, Kansai Electric Power Company took over the running of hydropower plants along the Kurobe River, and in 1953 the line inaugurated regular passenger service. The Kurobe Gorge Railway was set up in 1971 as a KEPCO subsidiary, and over time the line has come to be affectionately known as the “trolley train.” 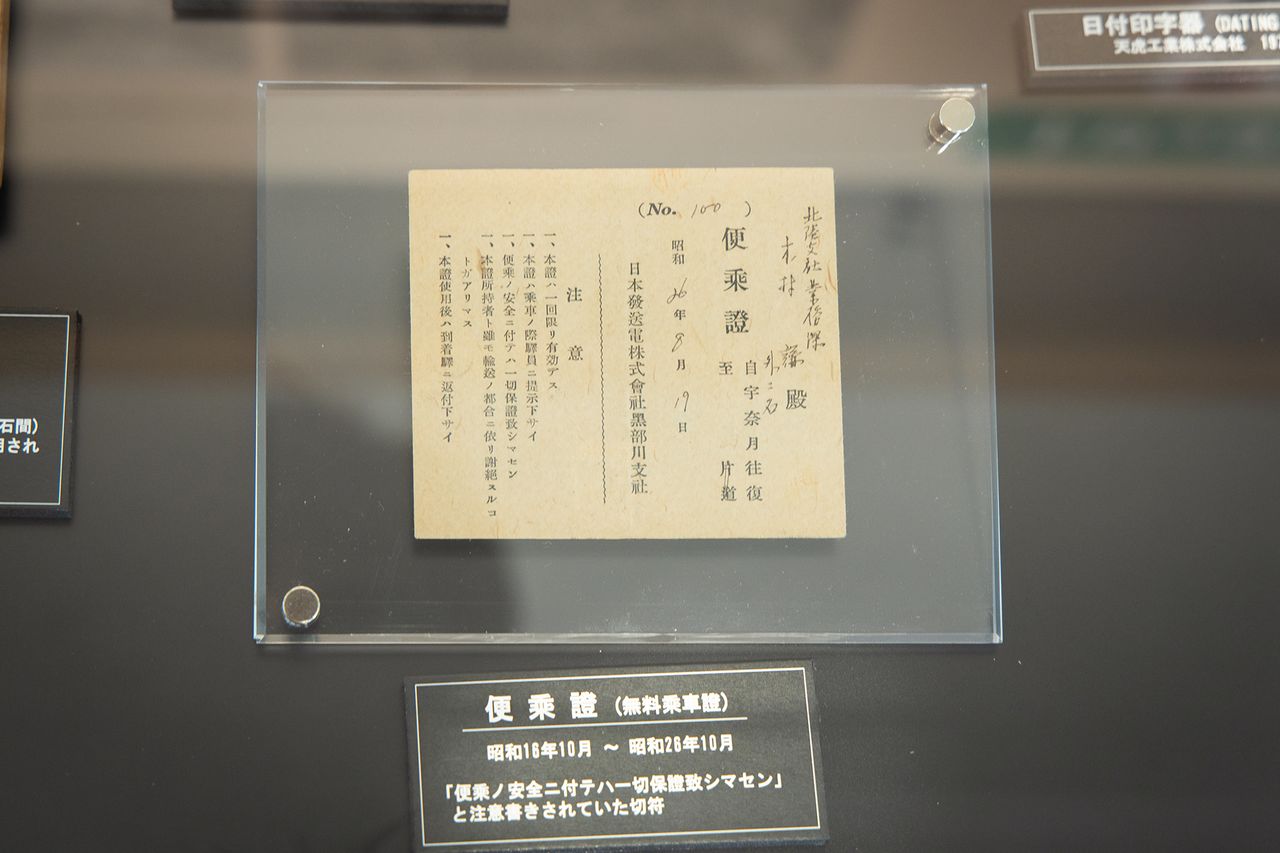 A 1951 ticket states that the railway assumes no responsibility for passengers’ safety. 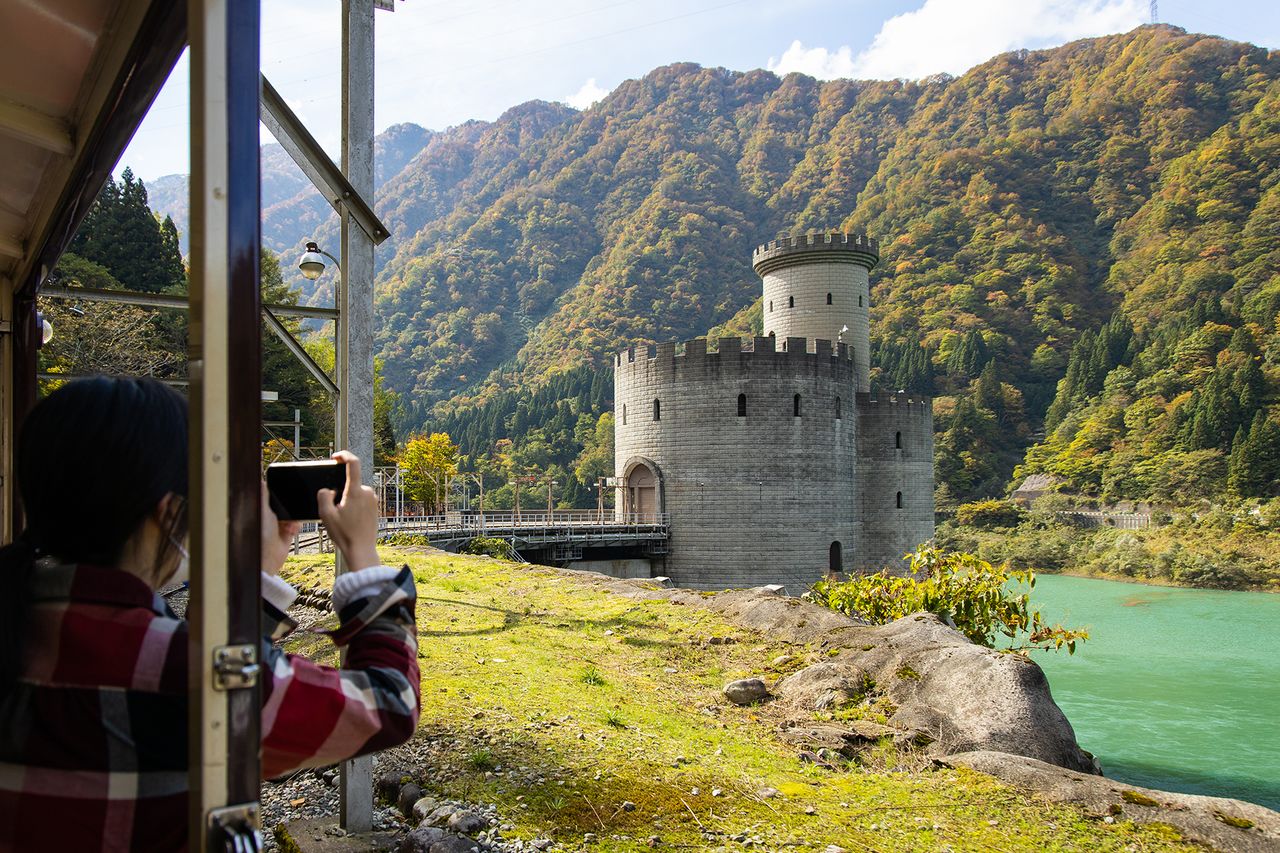 The castle-like Shin-Yanagawara Power Station is a relatively new facility that began operating in 1993.

A long stretch on the outward-bound leg of the trip up to Kanetsuri Station has the Kurobe River on the right and mountainous terrain looming up close on the left. The best view can be attainted on the right-hand side of the train, from where passengers can fully take in the scenic panoramas. As a service, the train’s PA system announces upcoming sights. Heading from Unazuki Station to Kuronagi Station, riders can see a suspension bridge built to enable resident macaques to cross from one side of the river to the other. Lucky passengers might even spot monkeys actually using it.

The blue Atobiki Bridge near Kuronagi Station hovers 60 meters above the ground and is the highest span on the route. The bridge takes its name from the Japanese phrase atobiki, meaning to “pull back,” something climbers are purported to do out of fear when staring down from the dizzying height. True to its reputation, the bridge offers a view of a dam aqueduct and steep mountainsides that is breathtaking. 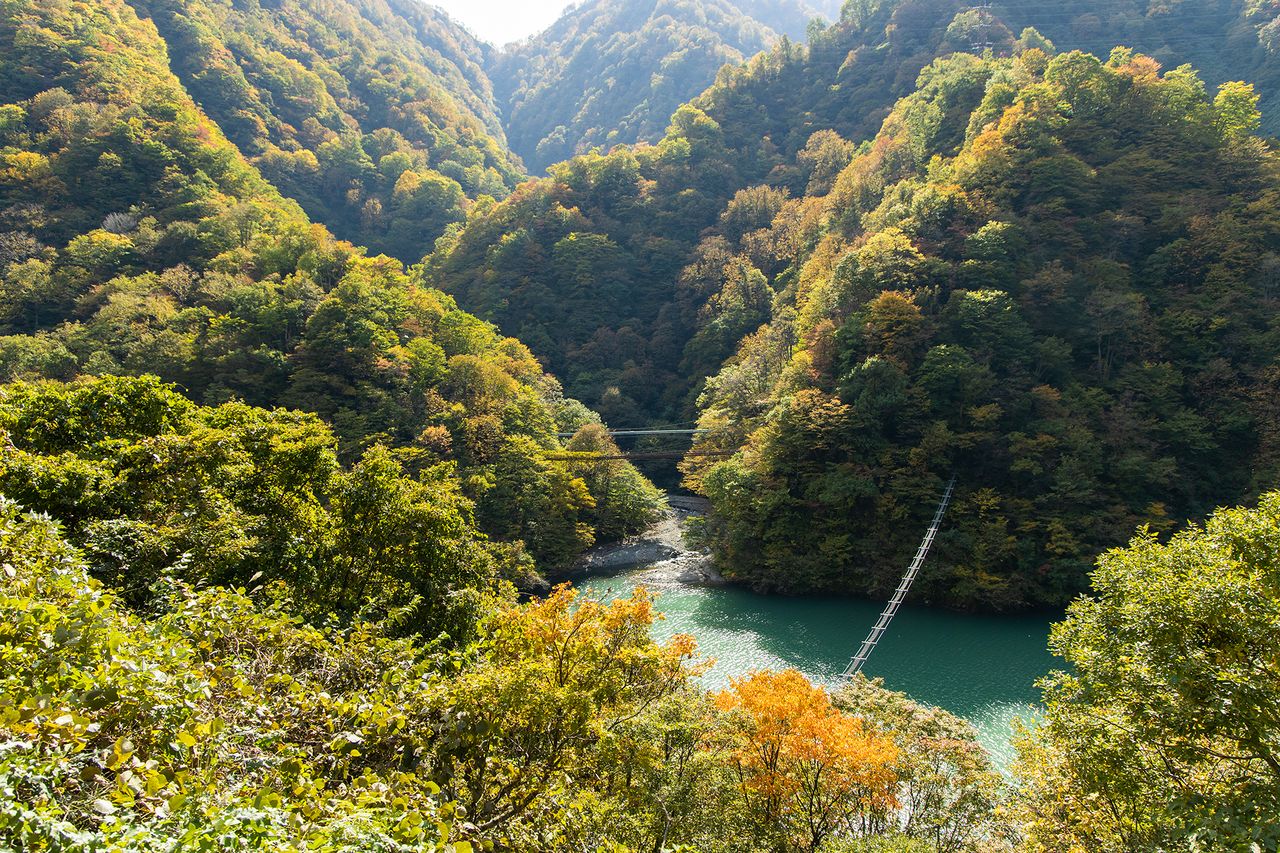 A suspension bridge allows macaques to move back and forth across the river. 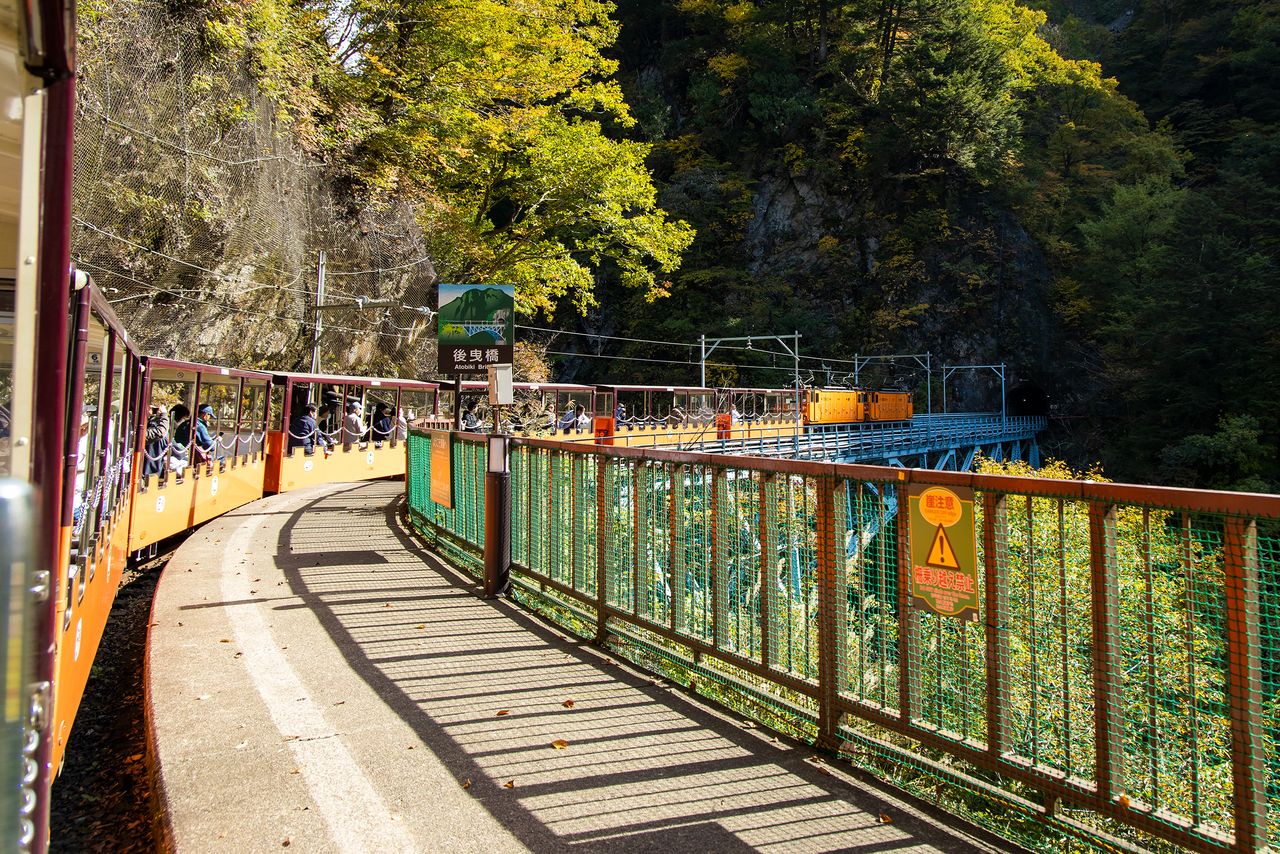 An aqueduct carrying water to Shin-Yanagawara Power Station, as seen from Atobiki Bridge.

At Kanetsuri Station, the train pulls onto a sidetrack to allow trains coming in the opposite direction to pass before reversing direction and continuing up the narrow valley. A rarity in Japan, the “switchback” maneuver is a must-see operation for railway buffs. Visitors can also walk down to the river, where in the summer months families flock to escape the heat. In one spot along the riverbank, thermal waters gurgle to the surface, and visitors can create their own private outdoor hot spring bath by strategically placing rocks to form a pool. 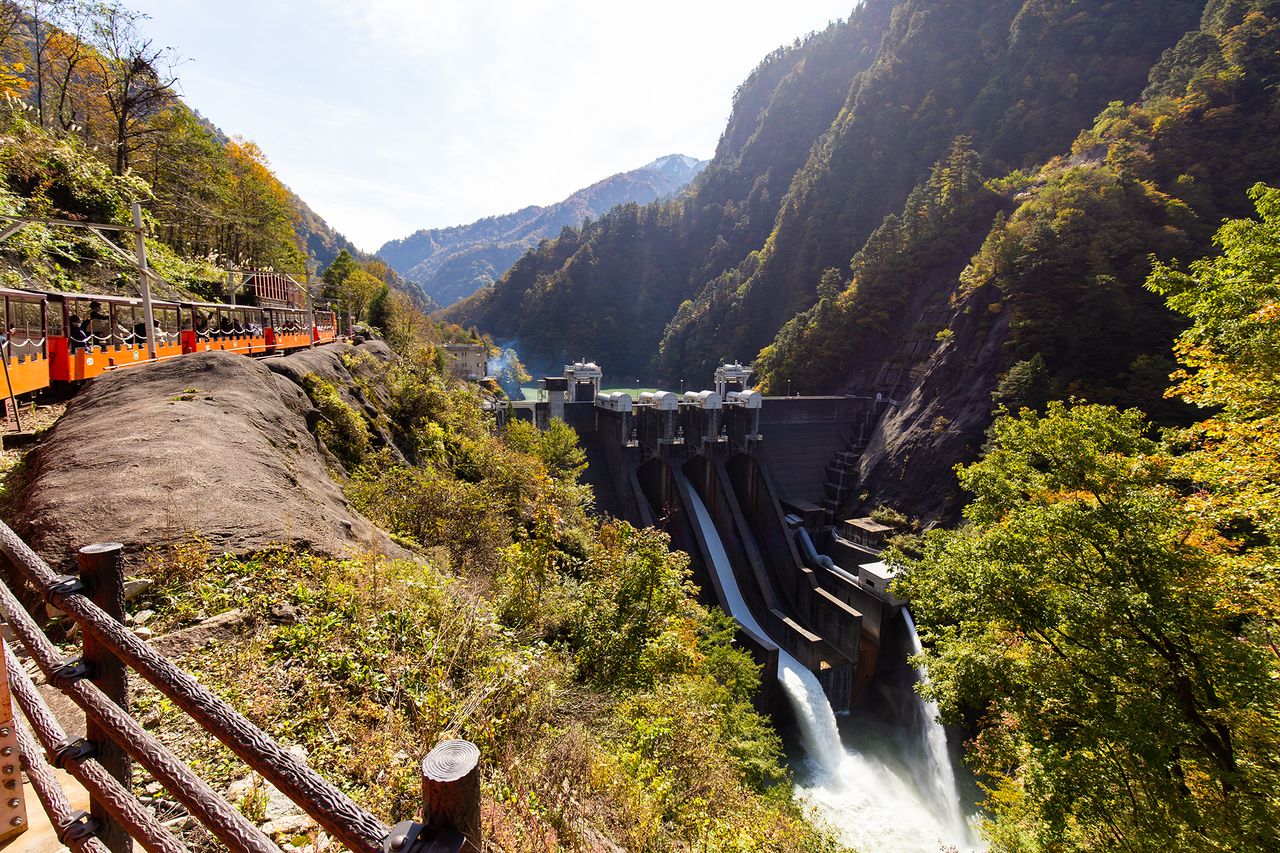 The train rolls alongside the Dashidaira Dam. 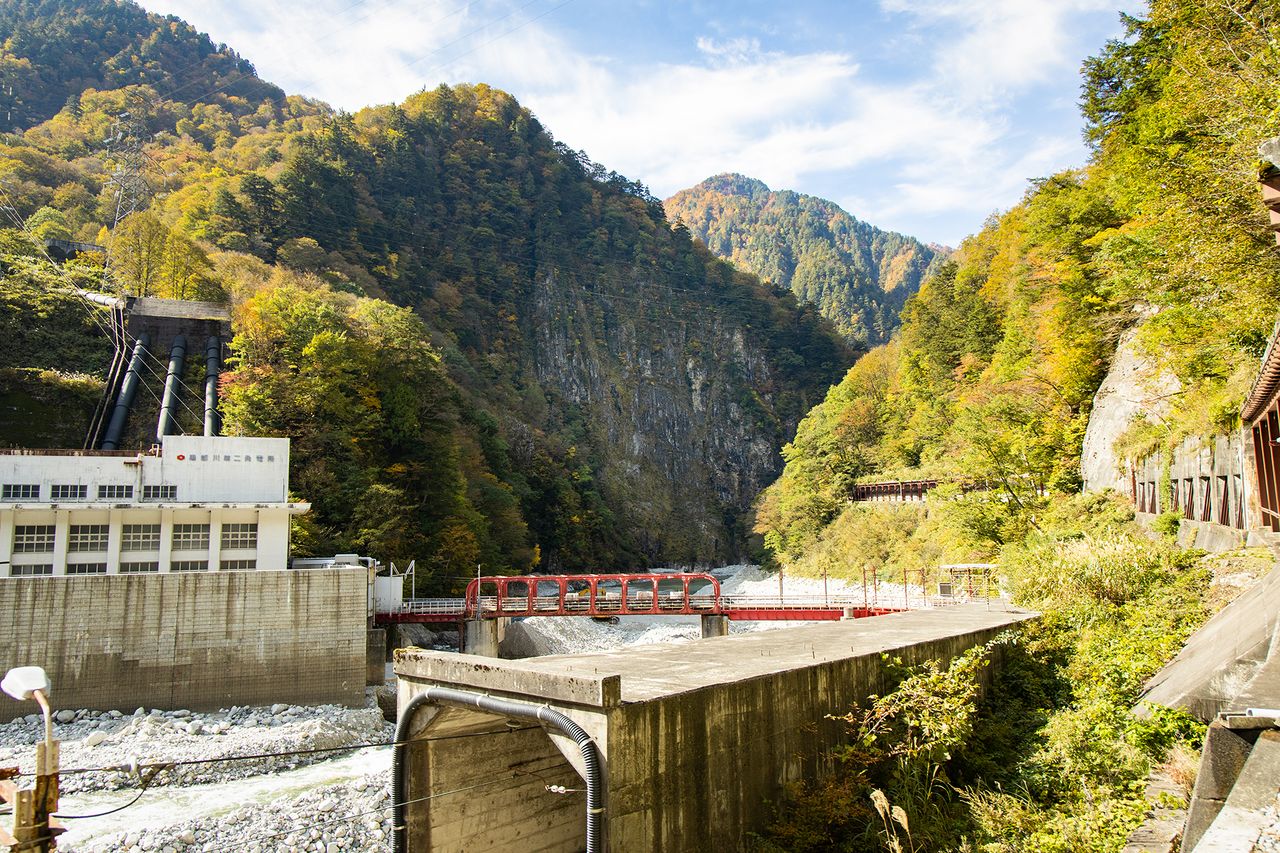 The 200-meter high cliff face of Nezumigaeshi looms beyond the red bridge at Kurobe Power Station No. 2. 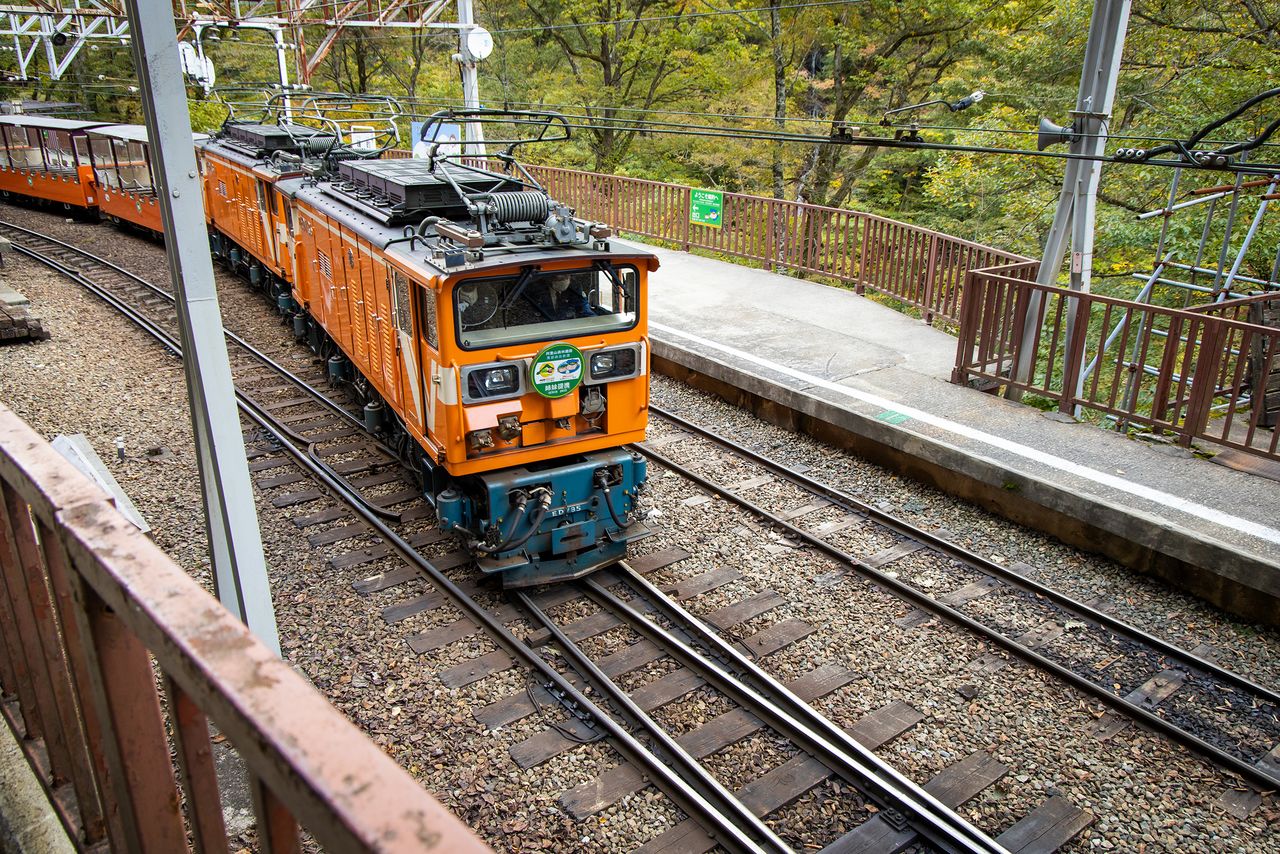 A train pauses at a siding at the Kanetsuri Station to allow carriages coming from the opposite direction to pass. The train reenters the main track by backing up a short distance. 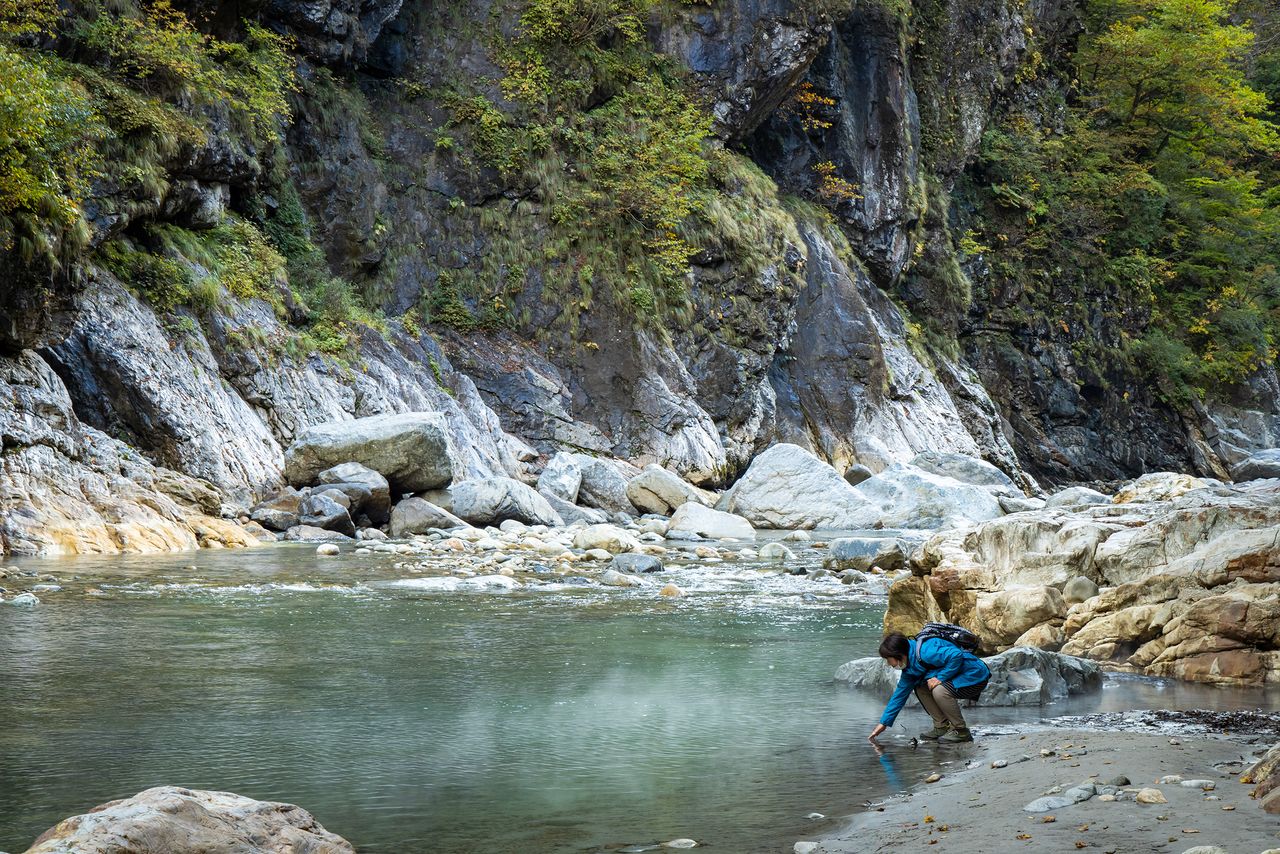 Steam rises from the riverbank near Kanetsuri Station. The hot spring is a great place for an impromptu foot bath.

Stopping Along the Line

There are a number of hot spring hotels and inns and plenty of appealing spots around Keyakidaira Station, the last stop on the line. The views from 34-meter high Okukane Bridge are stunning and the cliff face overhanging the walking trail is a thrilling sight.

The journey to the end of the line is one and a half hours, and the complimentary foot bath at the riverside lookout is a welcome treat. Visitors can also take a break at the visitor center, which has an exhibit on nature in the Kurobe Gorge and the history of development along the route. 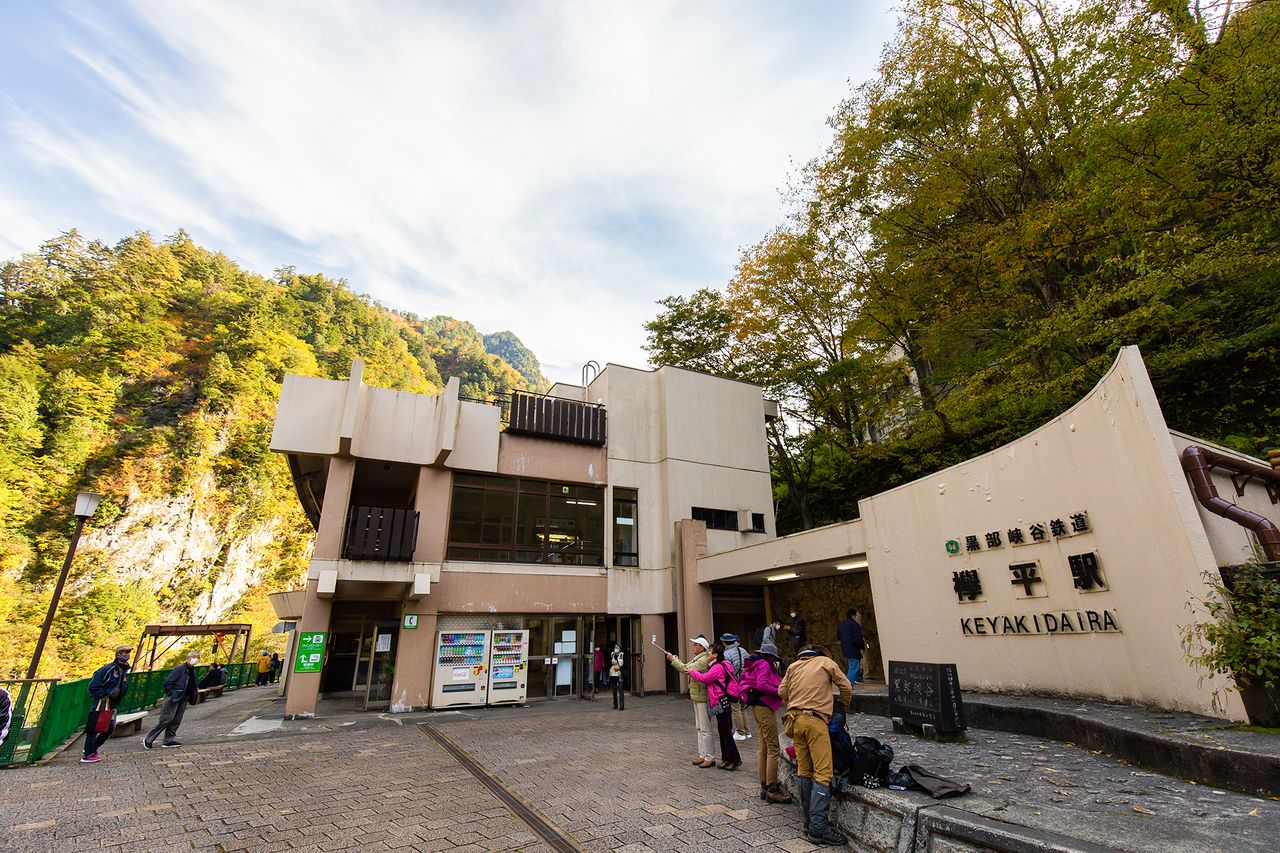 A lookout atop Keyakidaira Station. 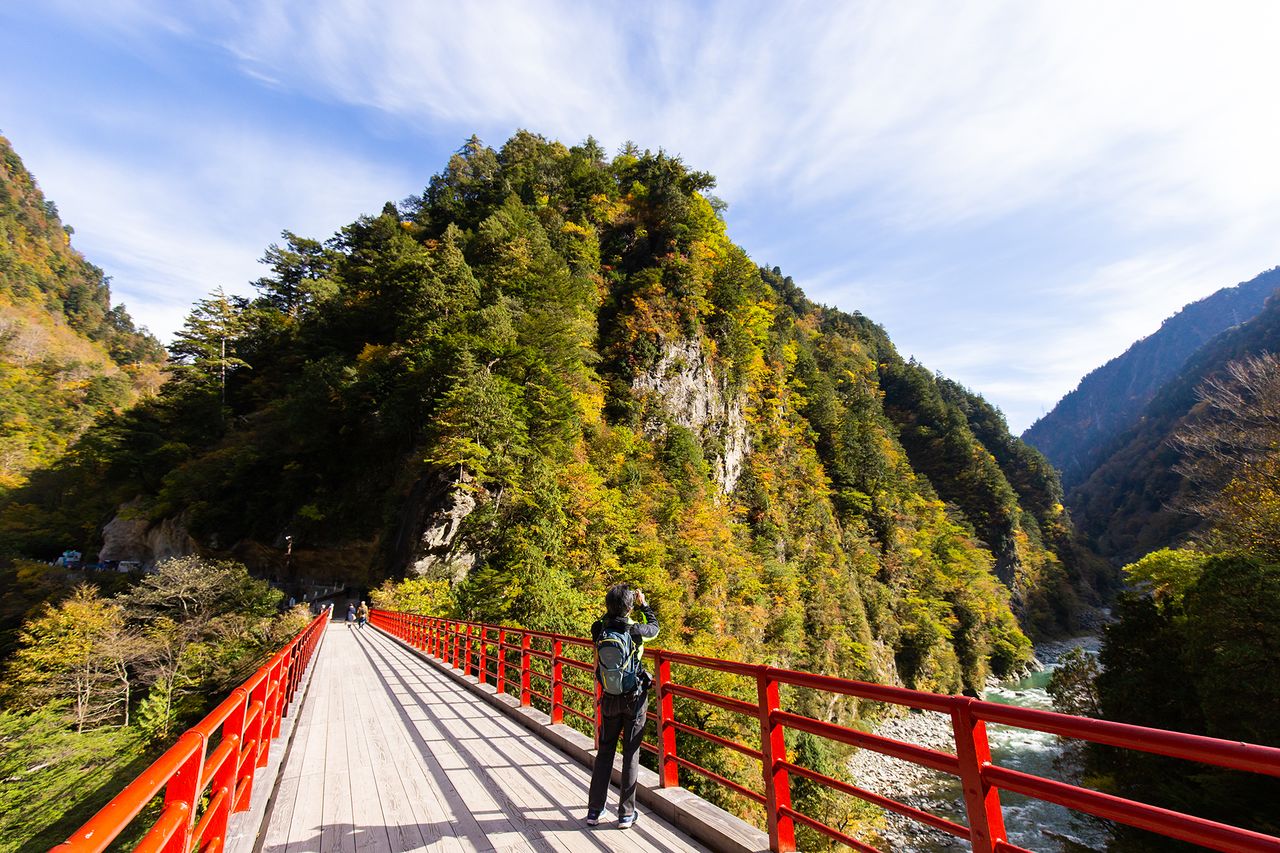 The vermillion-lacquered Okukane Bridge on the way to Babadani Onsen adds a spot of color to the lush greenery. In the background to the right is Kurobe River Power Station No. 3. 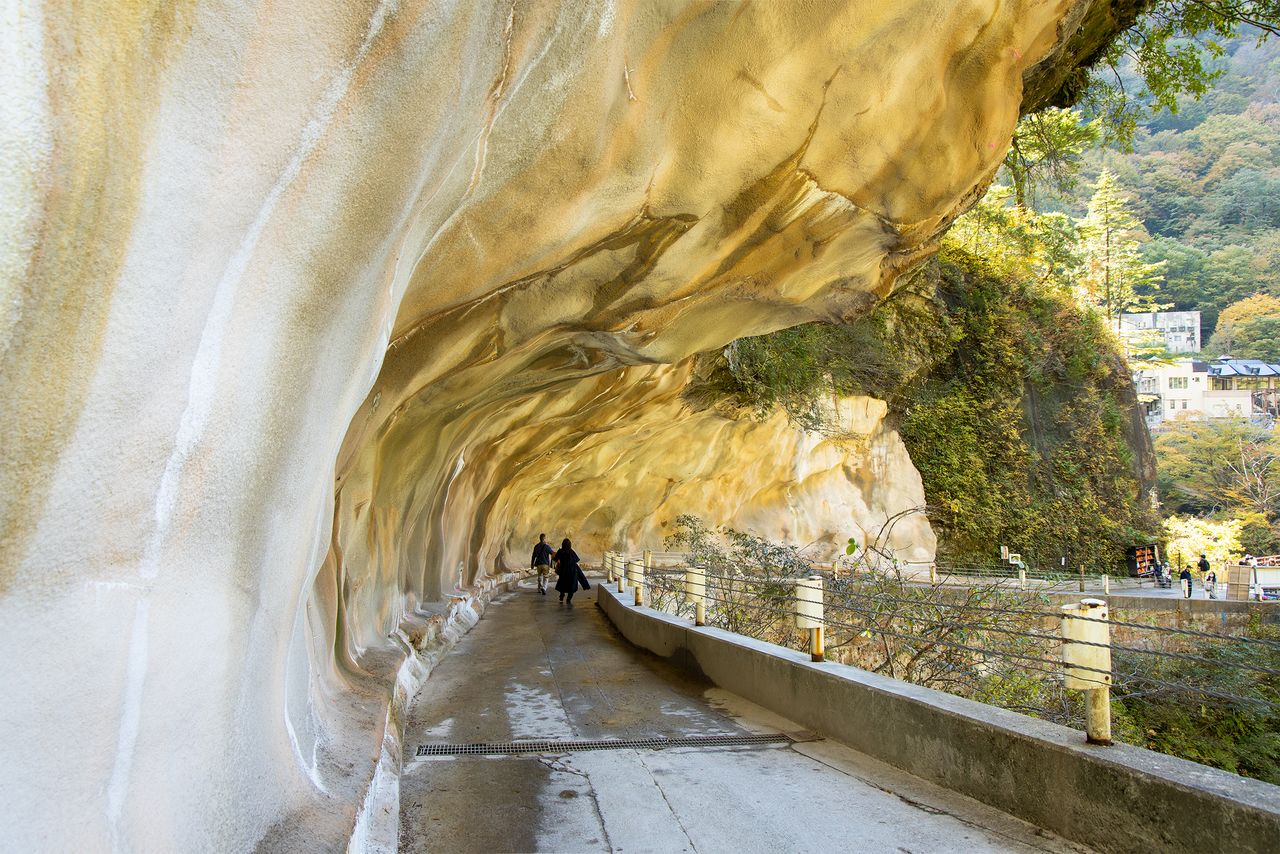 Visitors on the trail walk under a huge rock overhang. 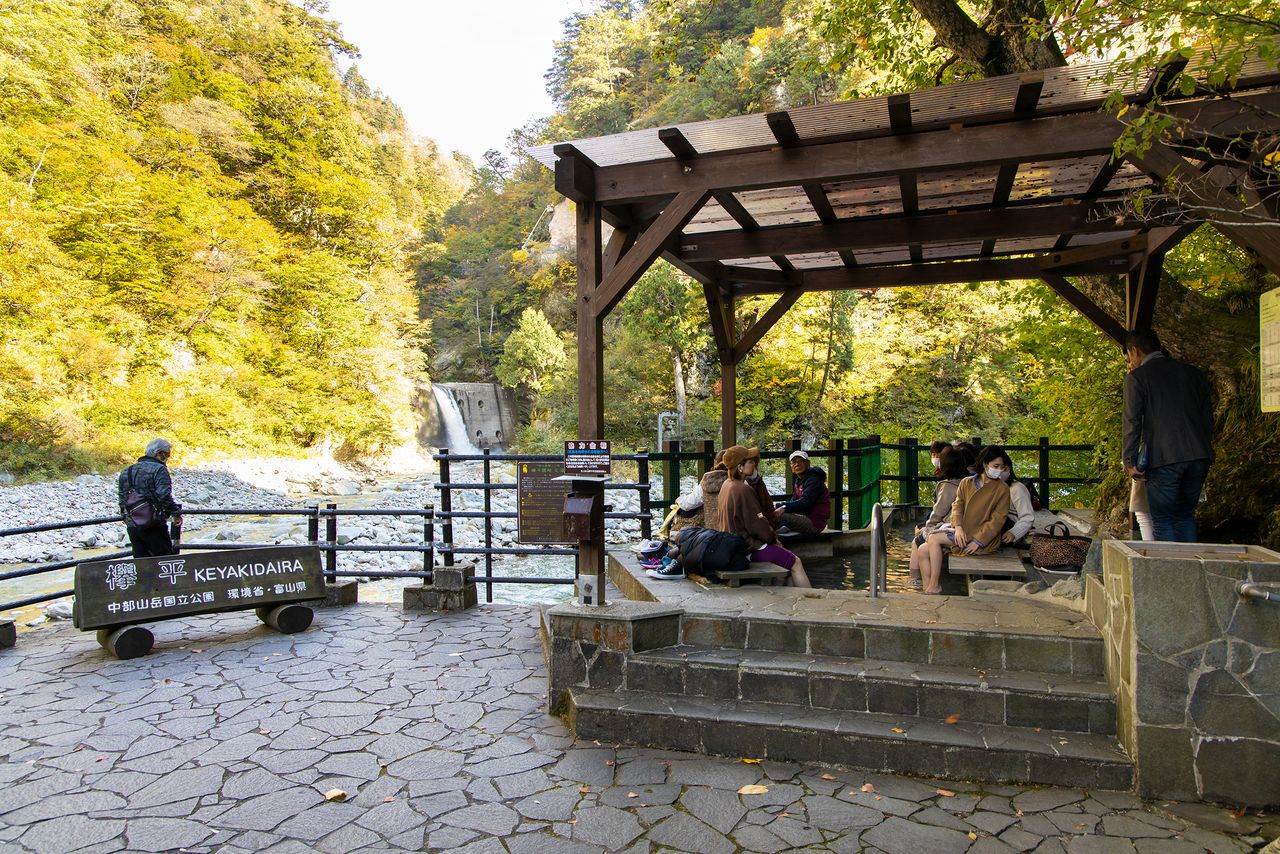 The riverside lookout offers good views of the surrounding mountains. The complimentary footbath is a popular attraction.

The area is known for its heavy snowfalls, forcing the railway to suspend services from December to mid-April. Operation resumes between Unazuki and Sasadaira Stations in mid-April, and the rest of the line operates from May to the end of November. Nishida, the public relations officer, says each season offers visitors distinct attractions, including snowcapped mountains contrasting with the budding spring greenery, cooling waters on the riverbank in summer, and the brilliant colors of the autumn foliage. He encourages visitors to get off the train to explore the sights around the stations at their leisure. 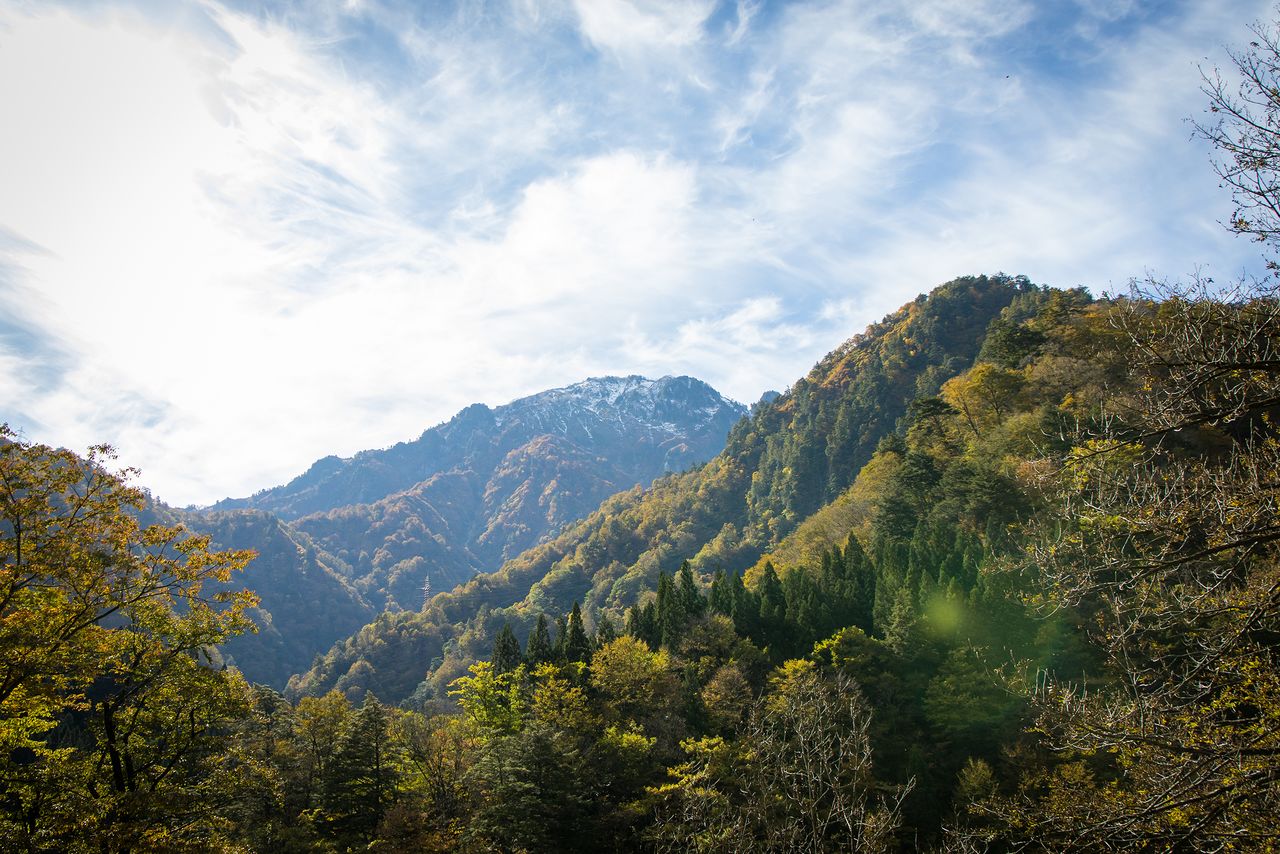 Snow is already visible at the very top of the mountains by the end of October.