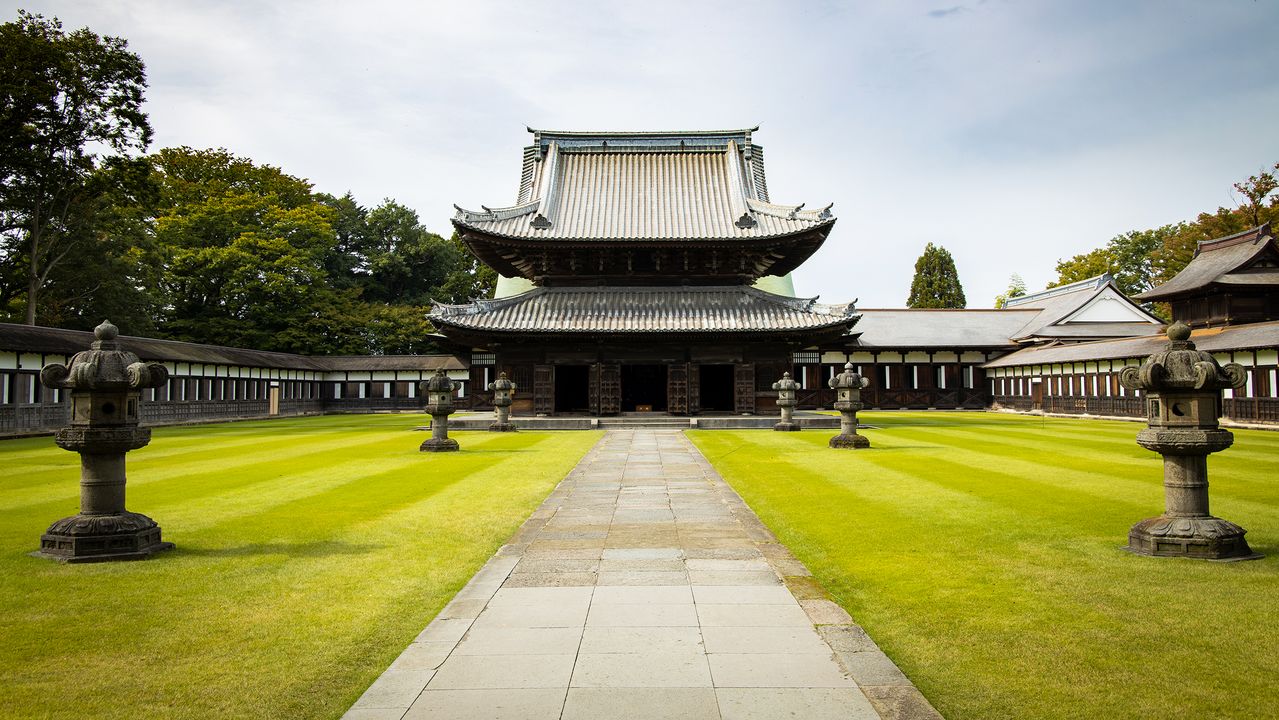 History Travel Jan 15, 2021
The revered temple Zuiryūji in the city of Takaoka, Toyama Prefecture, is a masterpiece of Zen architecture from the early part of the Edo period. Designated a National Treasure, it boasts an impressive temple compound linked by corridors.

The Zen temple Zuiryūji is known for its unusual layout, with the central Buddhist sanctum being surrounded by halls linked by corridors. Located in Takaoka, it is the only historical site in Toyama Prefecture to be designated a National Treasure, having received the honor in 1997. Dedicated to the Sōtō school of Zen, the temple was built by the third lord of the Kaga domain, Maeda Toshitsune (1594–1658), to commemorate his predecessor, the powerful warlord Maeda Toshinaga (1562–1614).

Under the rule of Toshinaga, the Kaga domain during the early Edo period (1603–1868) grew to be the largest province in Japan, second only to the holdings of the Tokugawa shogunate. Clan founder Maeda Toshiie, who was part of the council of Five Great Elders that advised the prominent warlord Toyotomi Hideyoshi, was granted the vast Kaga domain. Toshinaga expanded the family lands further by fighting under the Tokugawa colors in the decisive Battle of Sekigahara in 1600. The size of the Kaga domain made it a potential threat to the newly formed Tokugawa government, but Toshinaga managed to assuage the concerns of founder Tokugawa Ieyasu while also keeping a tight rein on his querulous large family, laying the foundations for the lasting wealth of the domain. It is for this reason that Toshinaga, rather than Toshiie, is often referred to as the first leader of the Maeda clan.

Having no sons, Toshinaga handed over the title of clan leader to his adolescent half-brother Toshitsune and retired to the castle town of Takaoka, although he remained in control of the domain until his death. 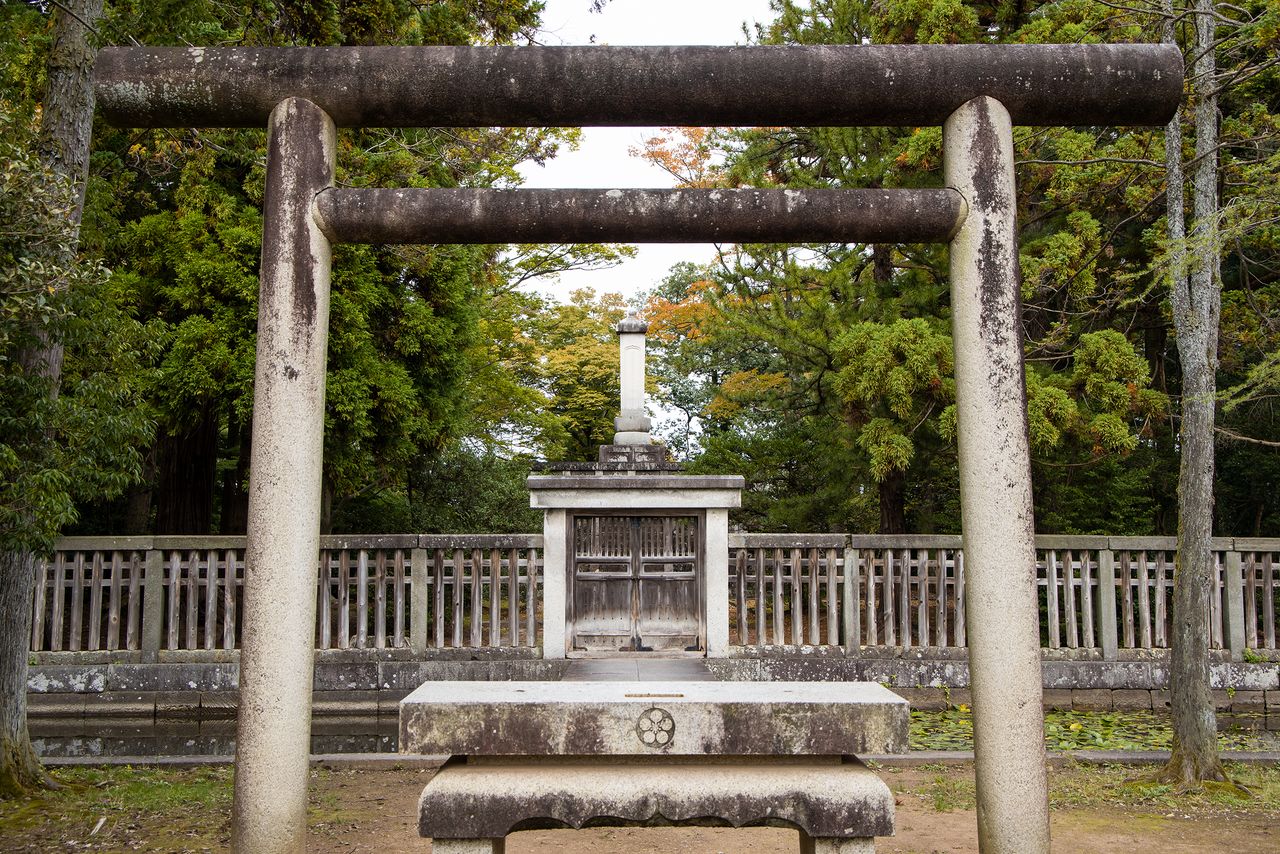 The tomb of Maeda Toshinaga and Zuiryūji are connected by the Hachōmichi, an 870-meter path stretching eastward from the main gate of the temple.

After Toshinaga died, Toshitsune designated Zuiryūji as the family temple to give thanks for his succession as leader of the clan. The full-scale construction of the compound started in the Shōho era (1644–1648) and was completed in 1663, the fiftieth anniversary of Toshinaga’s death. 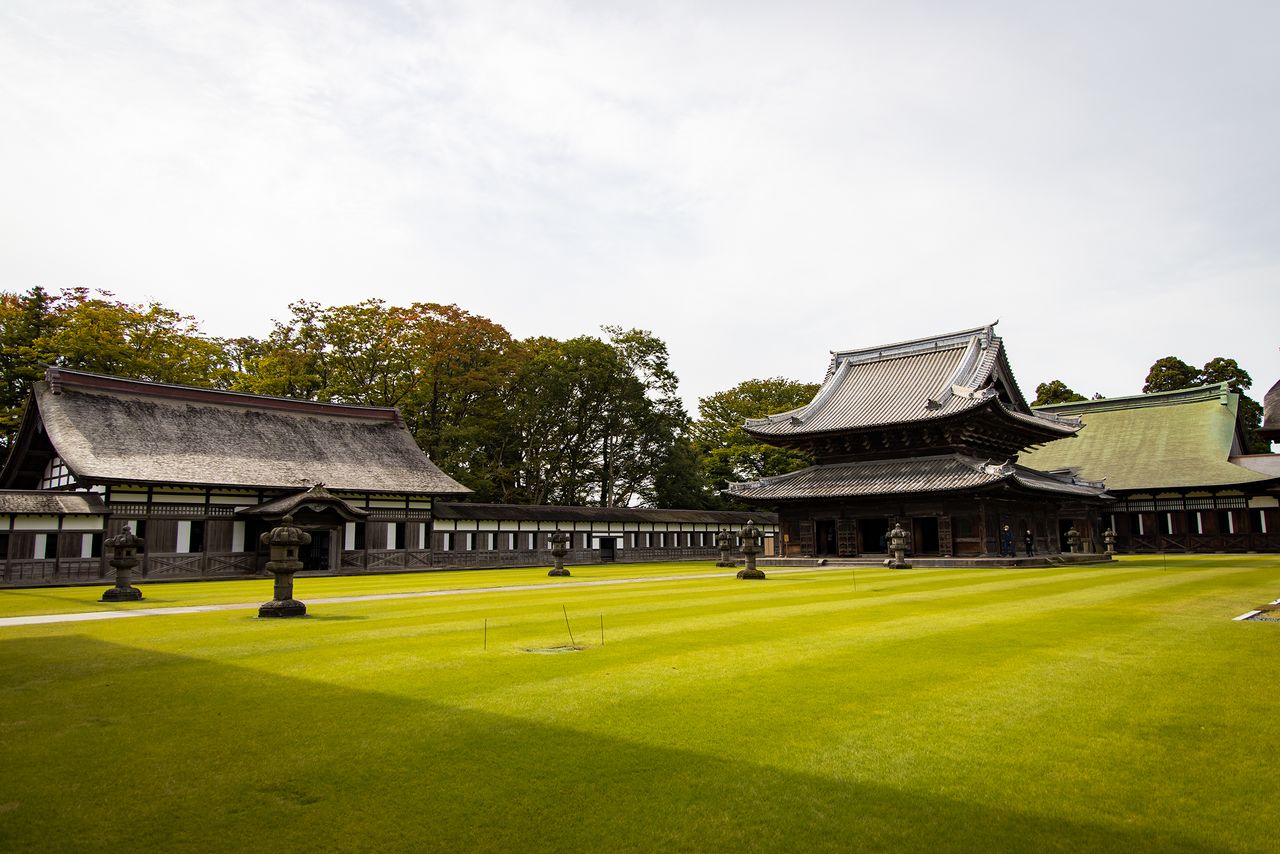 The meditation hall of Zuiryūji to the left and the Dharma hall at the back on the right lend to the unusual configuration of the compound.

A Temple and Keep

In the early, uncertain days of the Edo period, the shogunate considered the Kaga domain, with its vast wealth, as a potential threat to the its authority. This fact was not lost on the leaders of the province, and Zuiryūji offers a glimpse into the political maneuvering and considerable insight required of family heads to maintain the great Maeda clan and remain in the good graces of the shogunate.

Yotsuya Dōkō, Zuiryūji’s chief priest, tells how in 1615, the shogunate promulgated a law limiting each domain to one castle. The Maeda clan chose Kanazawa as the capital of the province and demolished the castle at Takaoka. However, to help defend Kaga’s expansive lands, they built the magnificent temple Zuiryūji there, designing it in a way that hid its secondary role as a defensive fortification.

Yotsuya notes how the main gate, built in the yakuimon style, boasts large eaves, massive pillars, and a sturdy, trapezoidal wall. “There is a similar structure in Tokyo,” he explains. “The Akamon Gate at the University of Tokyo, which was once the main gate of the Maeda clan’s residence.” Using the fact that Zuiryūji was Toshinaga’s family temple, Toshitsune had the main gate built as strong as that of the daimyo’s mansion in the capital to help guard the town of Takaoka. In this sense, the center of the Kaga domain remained in the old castle town of Takaoka, the resting place of the man who is called the founder of the clan, rather than at Kanazawa, where Toshiie and the graves of the Maeda family are located. 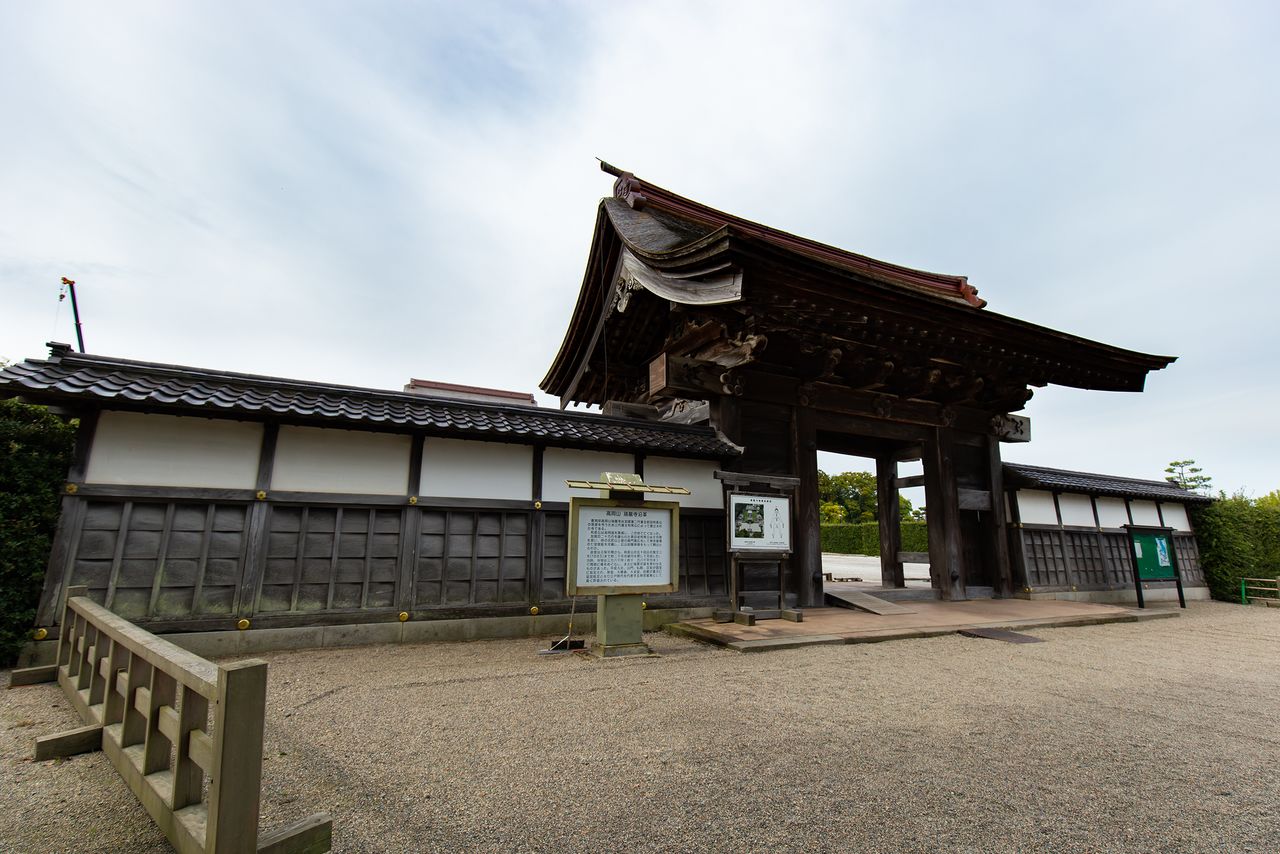 The Sõmon, or main gate, is designated a National Important Cultural Property. 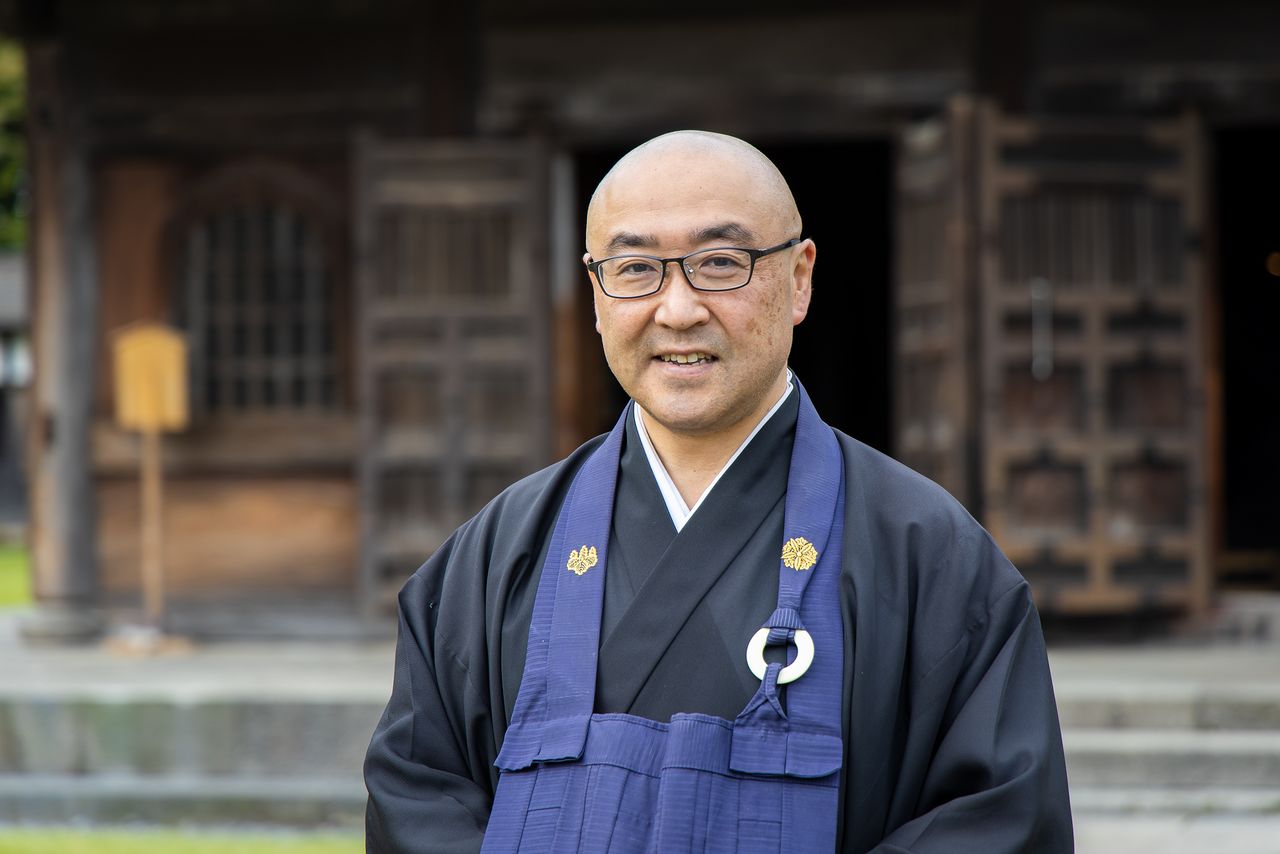 Temples of the Sōtō sect of Zen Buddhism are typically built deep in the mountains, making Zuiryūji, which sits on flat land, unusual. After going through the main gate, visitors traverse an open expanse before coming to the Sanmon, a towering gate that is designated a National Treasure. Corridors run to the left and right of the structure, and at a quick glance, the roof of the Daikuri, the kitchen of the monastery, at the back on the right and the roof of the meditation hall on the left line up in an aesthetically pleasing way above the corridors. This has earned the structure admiration as the “Phoenix Hall of Hokuriku.” The corridors stretch around the grounds, linking all the buildings and making it so the priests can carry on with their devotions even in the deep winter snows that blanket the region.

It is very clear that planners made full use of the flat surface of the site. Walking up the stone steps of the Sanmon brings the Butsuden, the main hall of the temple at the center of the compound, into view. The building fits perfectly into the frame made by the gate, the wooden statues of the fierce-faced guardian deities on either side adding to the scene. 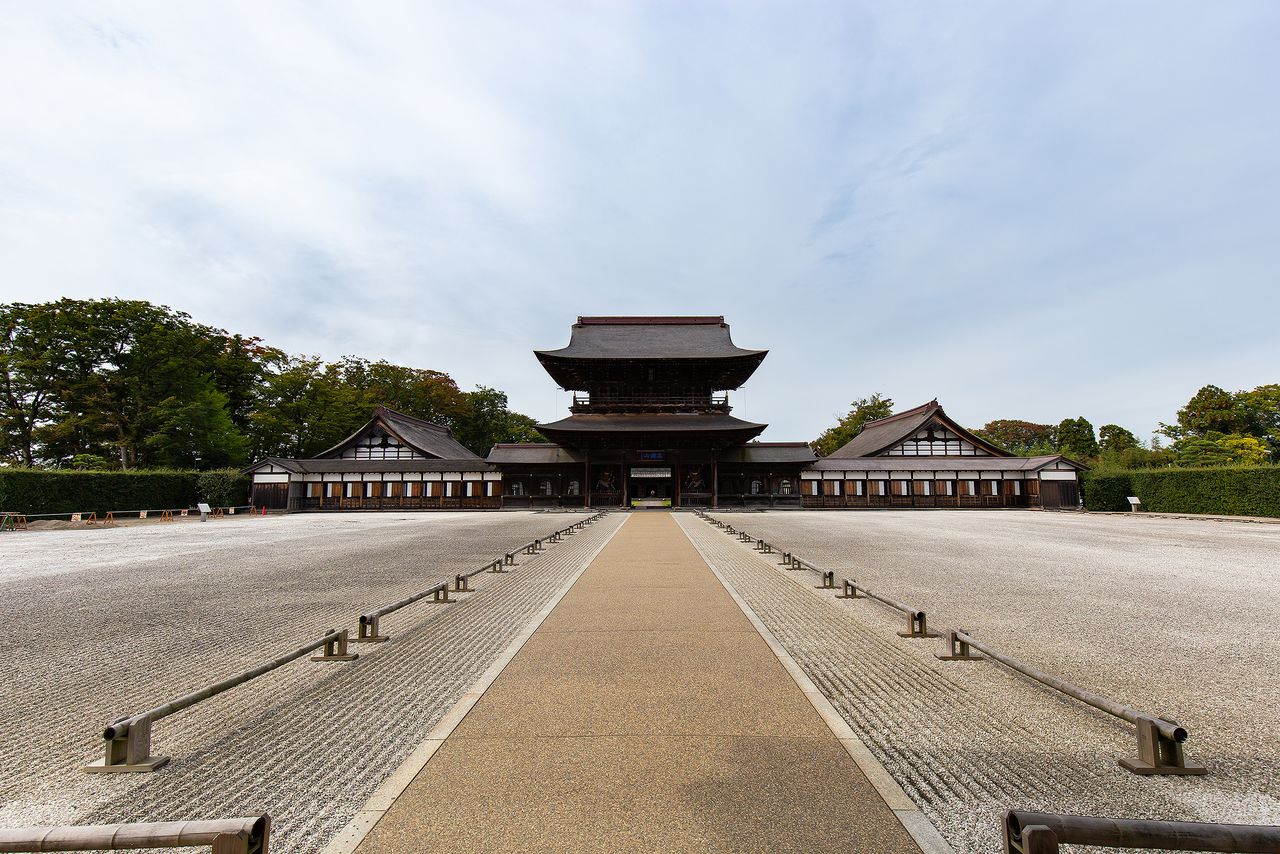 The Byōdōin (Phoenix Hall) of Hokuriku. The 18-meter high Sanmon was rebuilt in 1820. The Daikuri to the right and meditation hall to the left are designated Important Cultural Properties. 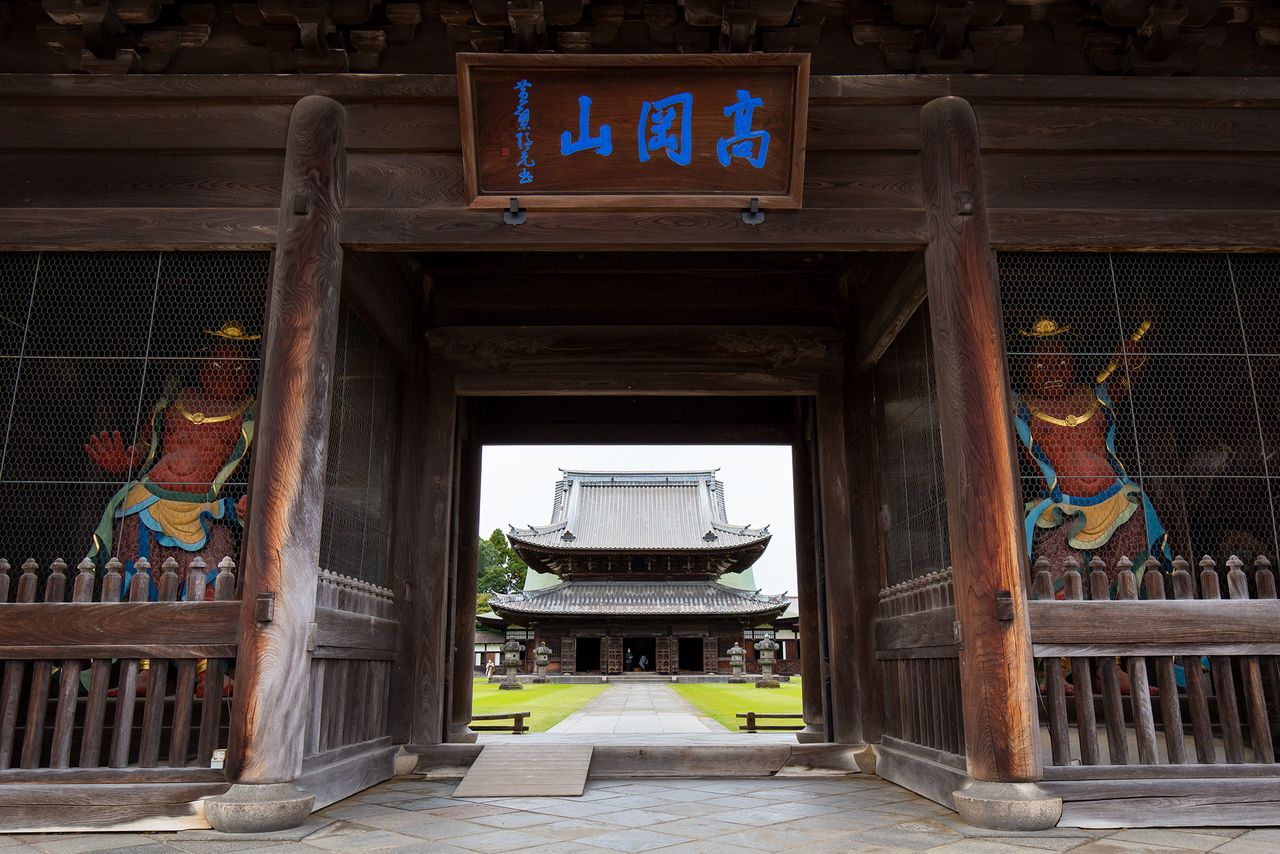 The Butsuden, or Buddha hall, is framed perfectly by the Sanmon. The wood tablet above the entrance reads “Takaokasan,” another name for the temple, and was written by the famous priest Ingen Ryūki, founder of the Ōbaku school of Zen.

A Sense of Beauty and Wariness

The Butsuden, also designated a National Treasure, is built from sturdy zelkova lumber and is topped with lead-plate roofing, a rare feature found in only one other structure, the Ishikawamon at Kanazawa Castle. The stone base of the hall was built by the Anōshū masonry group, which was known for building stout castle walls.

Enshrined in the shumidan, the main altar, in the center of the hall is an image of the Buddha Shaka Nyorai that is flanked by statues of Fugen Bosatsu (Bodhisattva Samantabhadra) and Monju Bosatsu (Bodhisattva Manjushri). Behind the altar is a wooden panel depicting the appearance of the Amidah Buddha. All of this is held up by two 600-year old zelkova pillars towering 13 meters high. The ceiling and walls are covered in exquisite kumimono moldings that also serve to dampen the shaking from earthquakes.

The building, which dates from 1659, shares many architectural features with the Tōshōgu Shrine in Nikkō, Tochigi Prefecture, but Yotsuya feels that the Maeda clan’s family temple has a certain sobriety not found in its celebrated peer. “As opposed to Tōshōgu and its colorful carvings,” he explains, “Zuiryūji emphasizes an exquisite configuration and the beauty of the raw materials, such as the grain of the wood.” He says the Maeda clan showed deference to the Tokugawa, a necessary facet of peacefully managing the large domain, but held a strong desire to build a structure that was splendid, although not overly so. 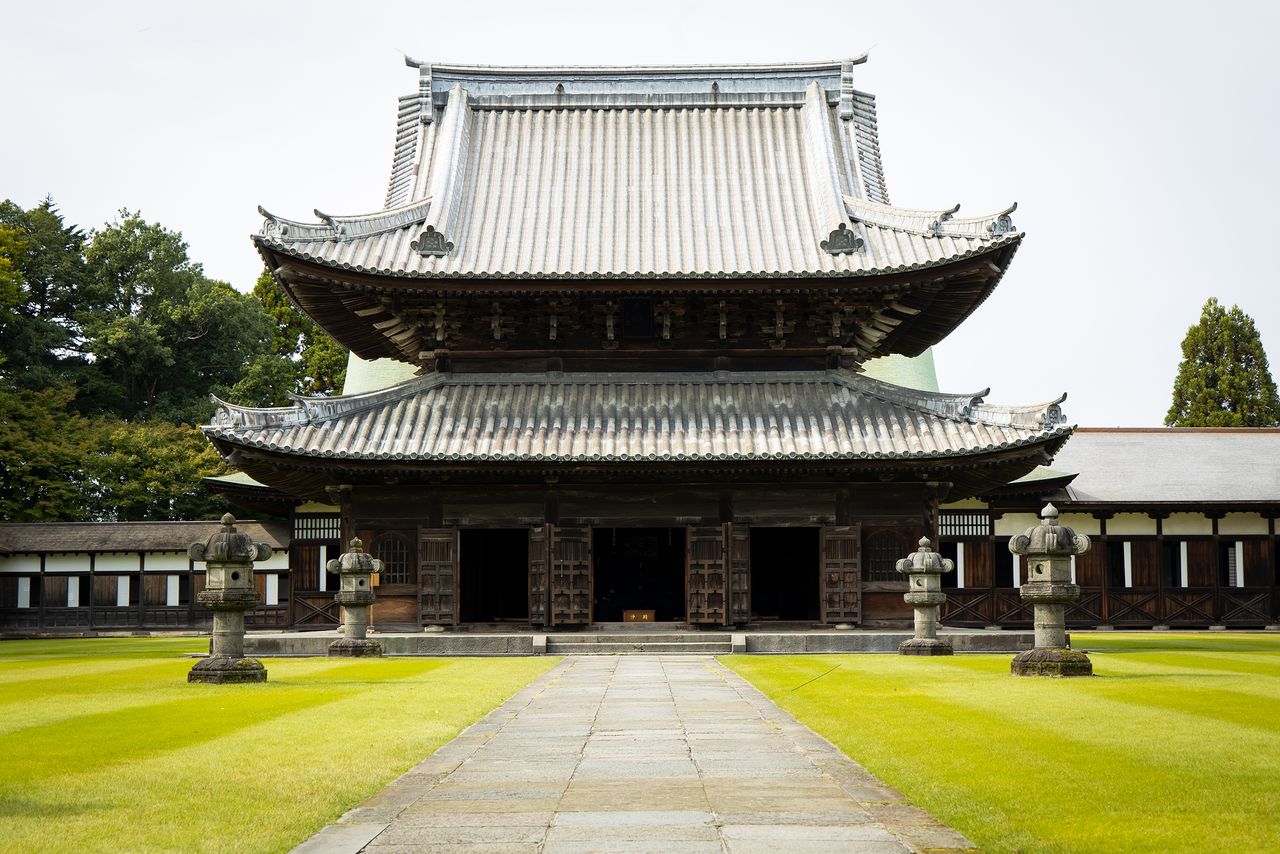 The lead on the roof of the Butsuden is said to weigh 47 tons in total. 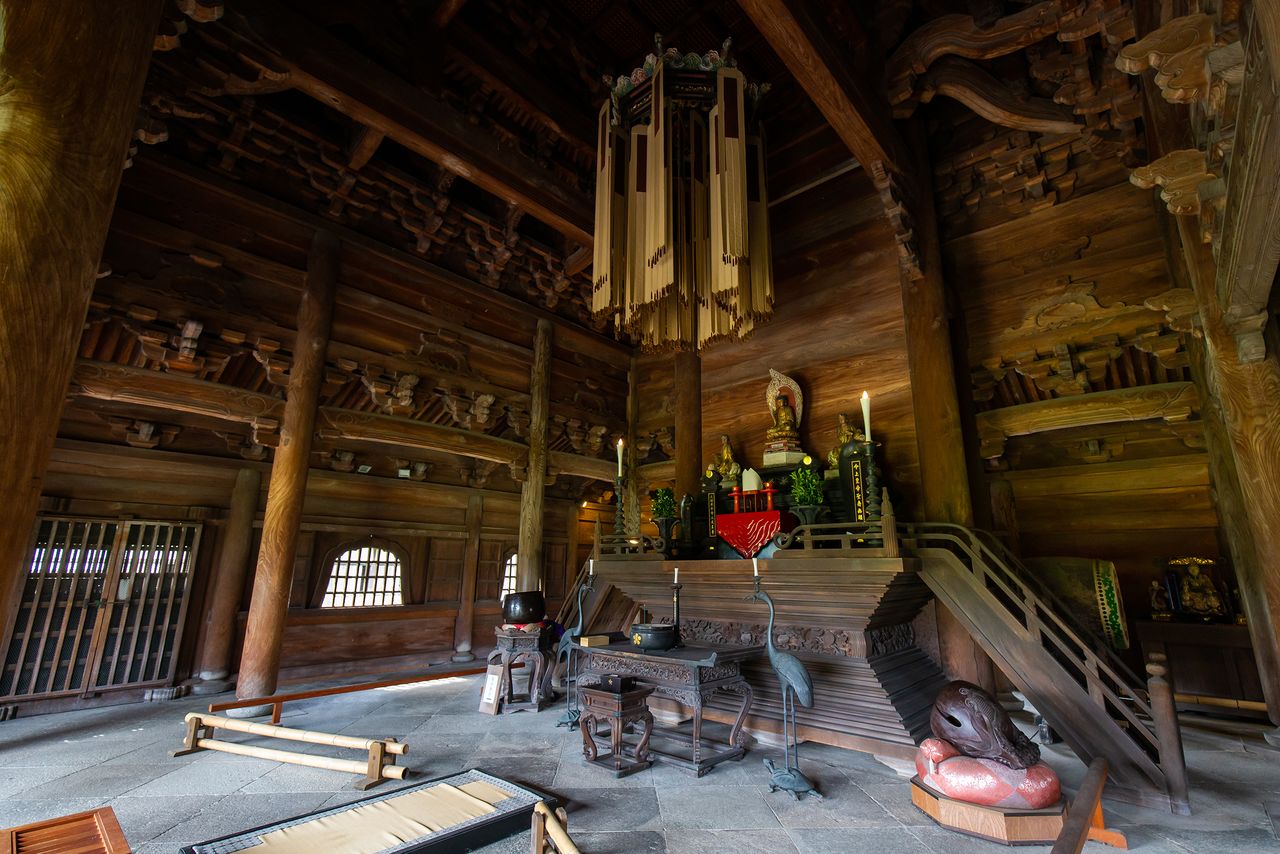 The interior of the Butsuden features magnificent pillars and intricate moldings. 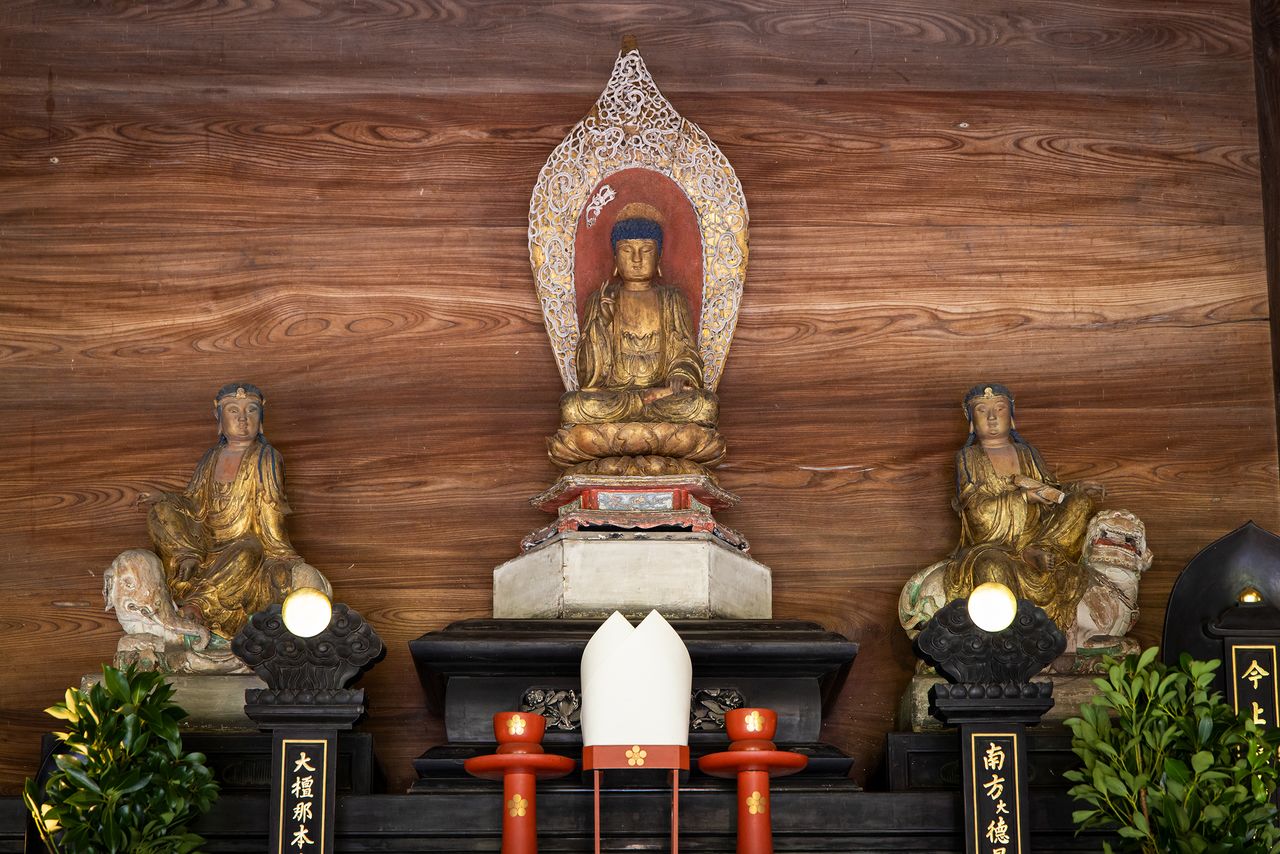 The principal images of the Buddha and attendants were brought over from China more than 300 years ago.

Zen temples typically enshrine the principal image of the Buddha in the Dharma hall, but in the case of Zuiryūji, the structure serves to hold Toshinaga’s mortuary tablet. Yotsuya explains that in building the Butsuden to house the principal images of the Buddha, the Maeda clan “showed off its aesthetic sense and wealth while making it possible to house Toshinaga’s mortuary tablet in the middle of the Dharma hall that stands behind the structure.”

The corridor of the Dharma hall looks toward the distant Tateyama mountain range, and it is said that the view faces directly toward the Tōshōgu. The appeal of Zuiryūji lies in the ways the Maeda clan filled it with profound aesthetic sense and defensive capabilities, while showing respect for the shogunate. 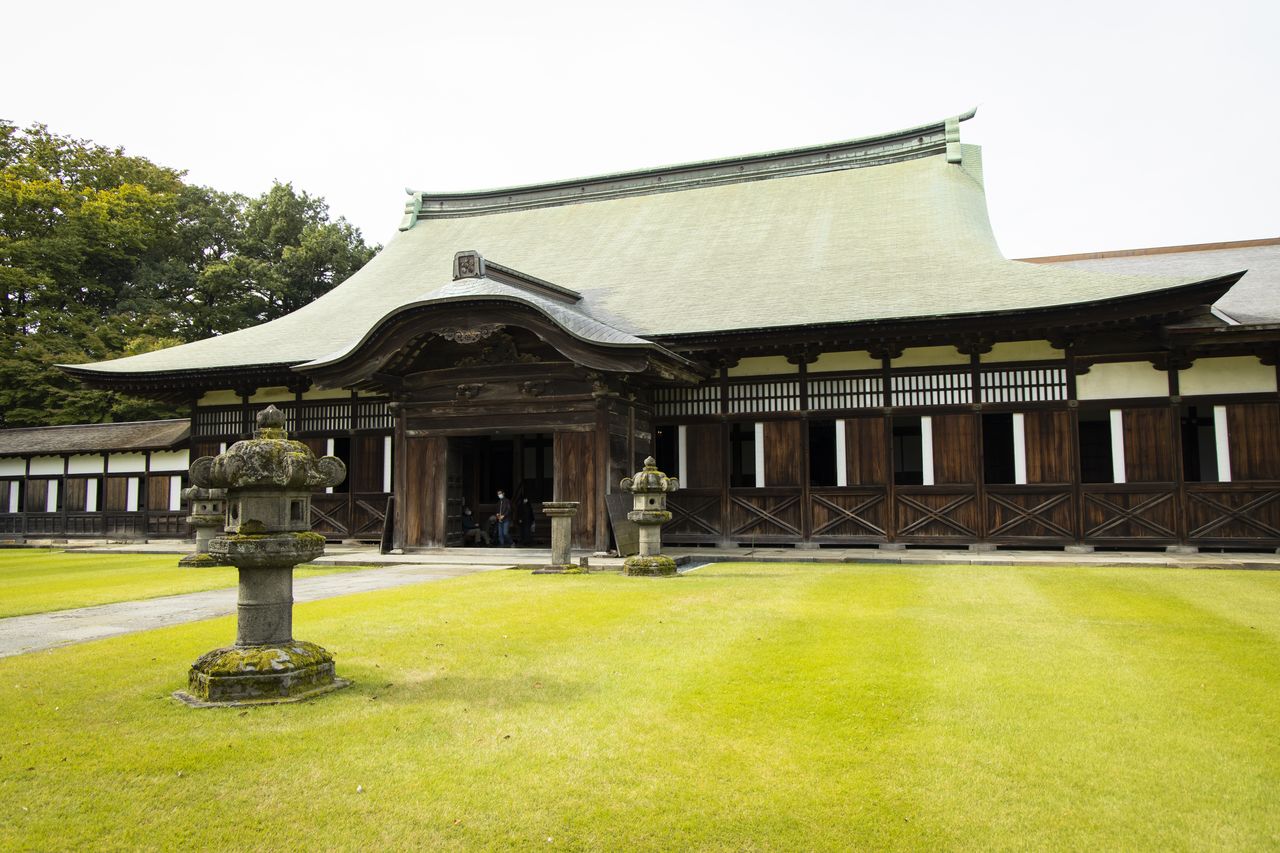 The Dharma hall, built in 1655, is also designated a National Treasure. 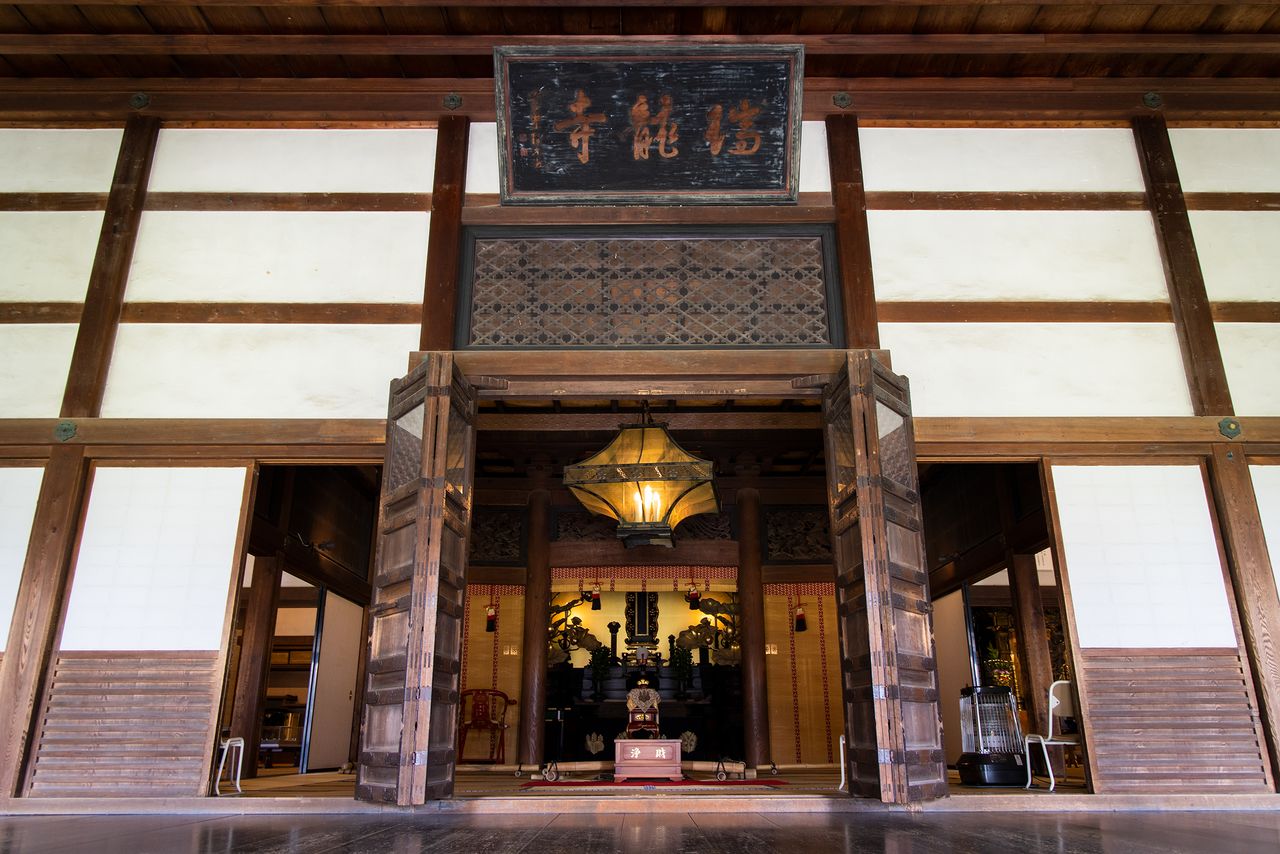 Toshinaga’s mortuary tablet is placed on the Buddhist altar in the center of the Dharma hall. 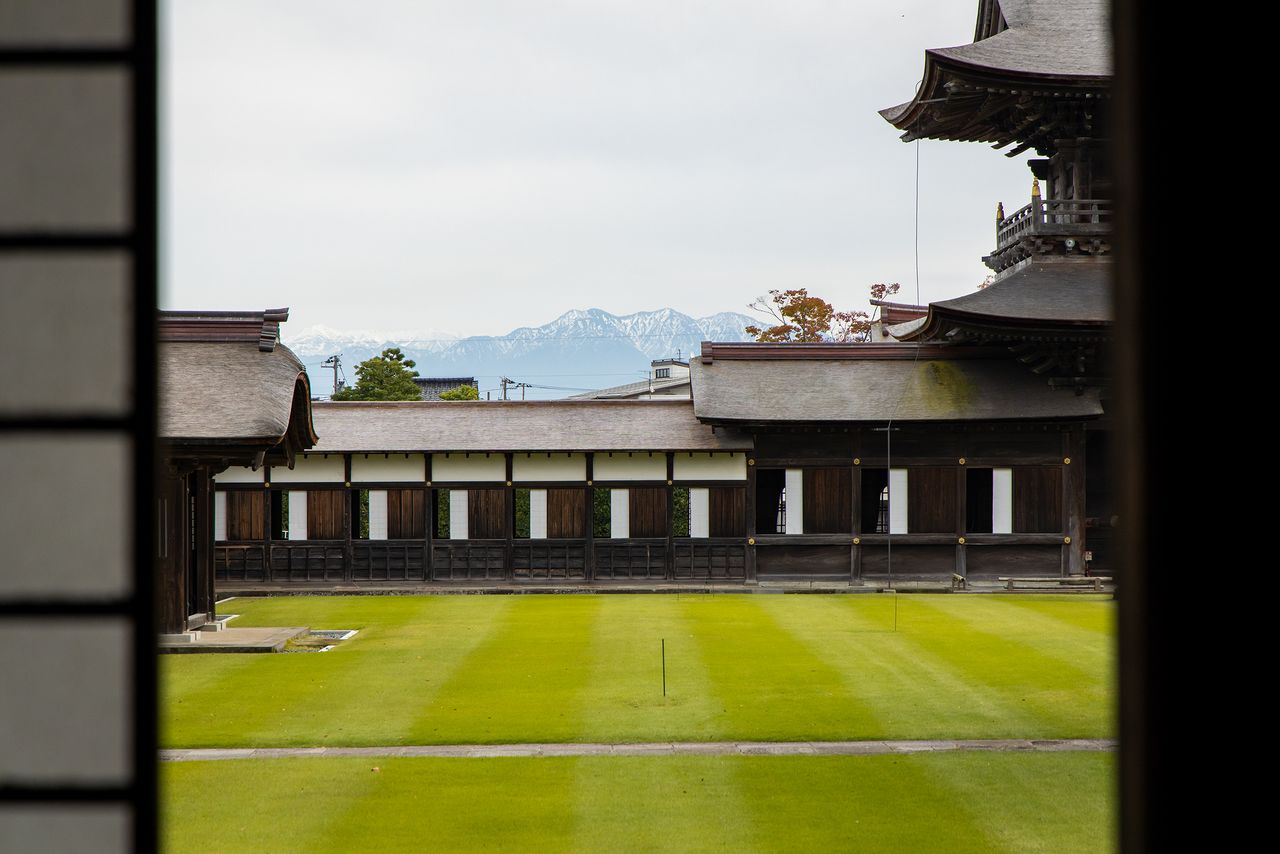 The peaks of the Tateyama mountain range, the guardian of the temple, can be seen from the corridor of the Dharma hall.

A Shrine to Peace

Other prominent buildings at Zuiryūji include the meditation hall and the Daikuri, both of which are designated important cultural properties. There are also small mausoleums that contain some of the ashes of Toshinaga, Toshiie, and warlord Oda Nobunaga, the father of Toshinaga’s wife Ei Hime. During the summer and winter, the complex stages an illumination display that is popular with visitors.

A recent topic of interest has been the statue of Ususama Myōō, a deity that helps purify toilets. The 117-centimeter figure of the god, shown standing on one leg and leaning forward slightly, dates back to the Muromachi period (1333–1568). There was great religious faith in Ususama Myōō, who is also said to bless people with children, among warriors eager for successors. 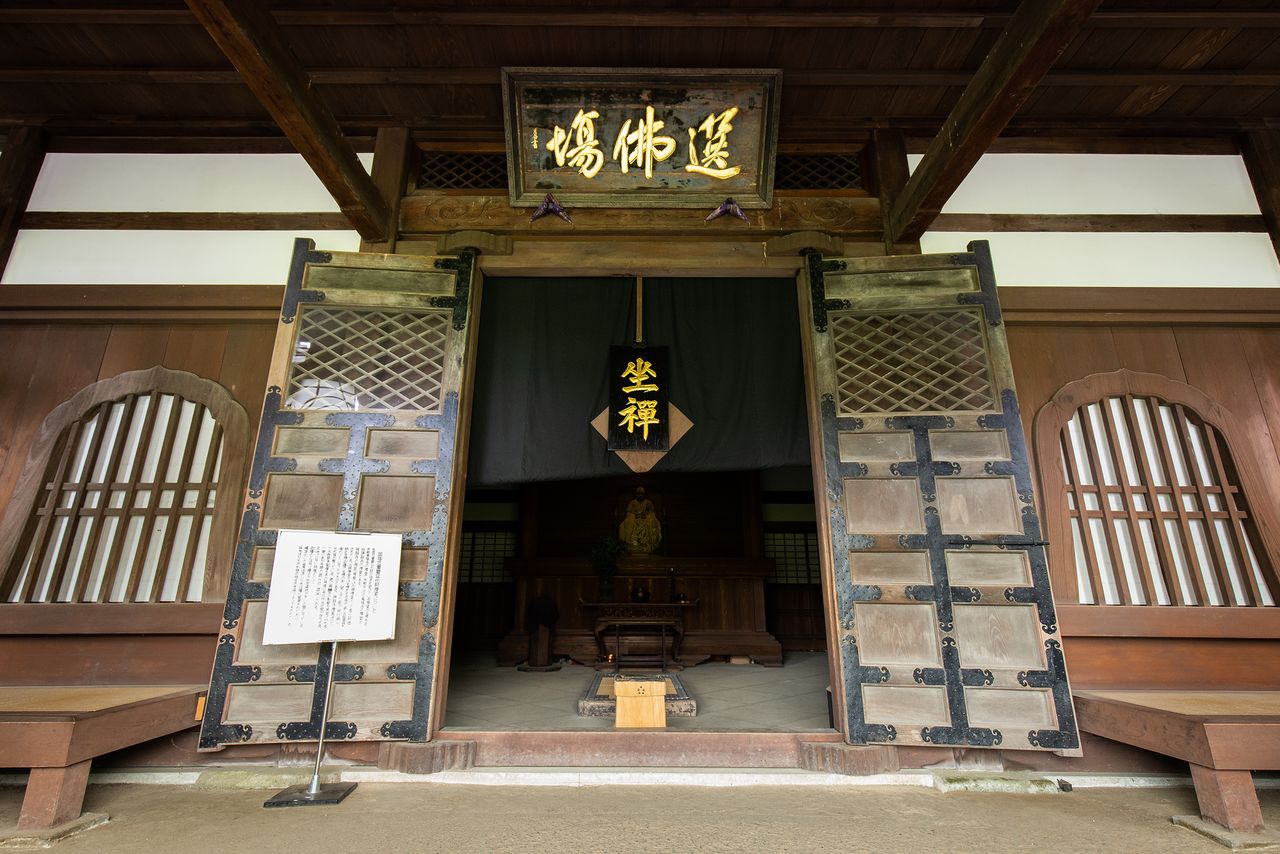 The meditation hall, used for zazen practice, is designated an Important Cultural Property. 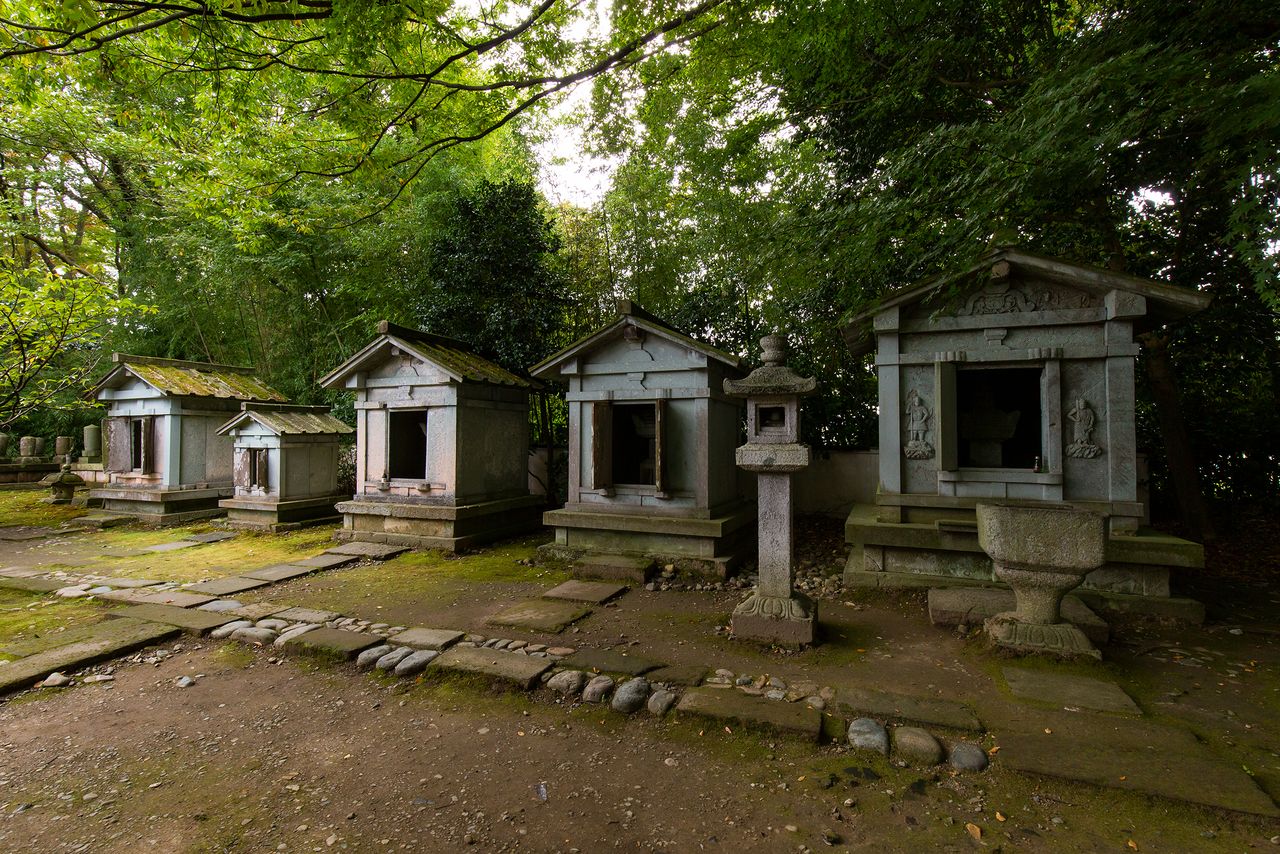 The mausoleums of Toshinaga, Toshiie, Oda Nobunaga, and others. 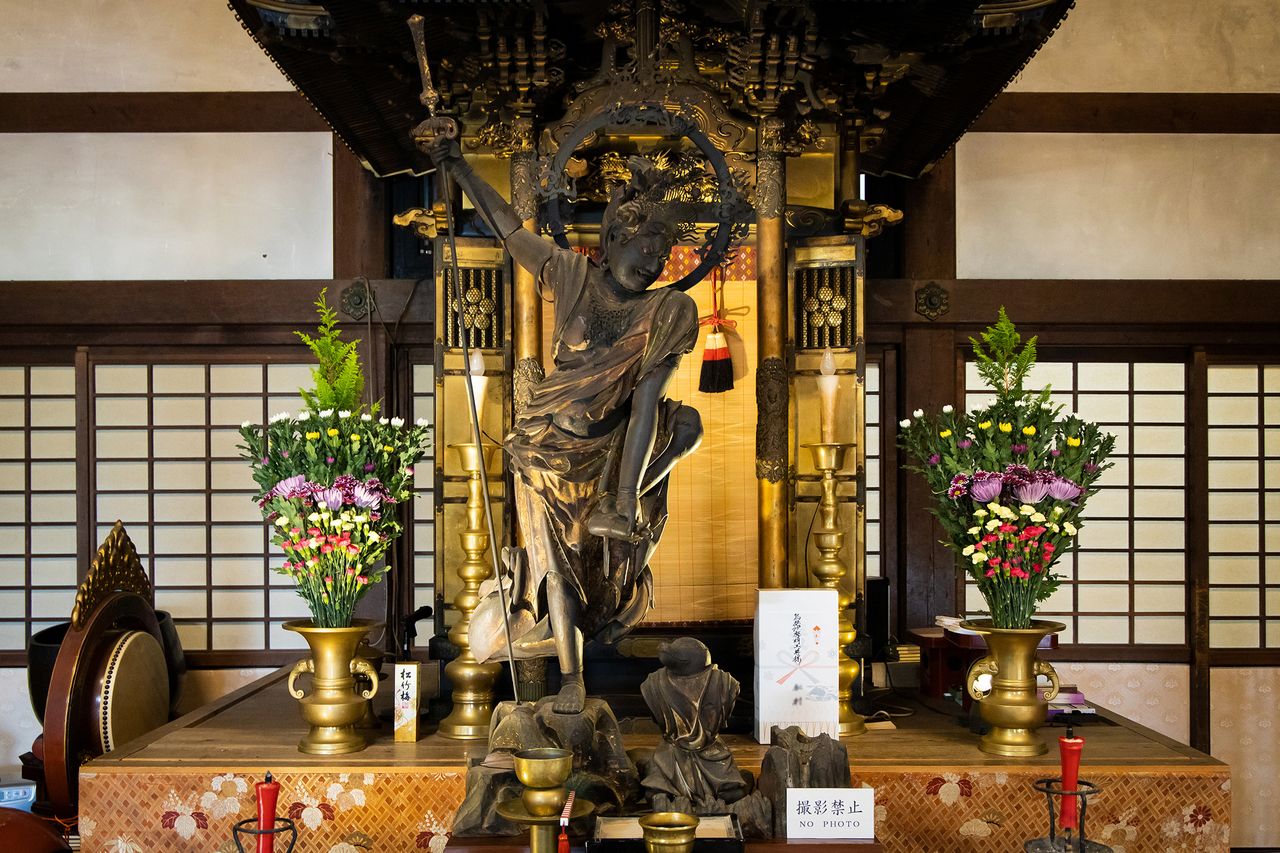 The statue of Ususama Myōō is only displayed to the public at certain times of the year.

Yotsuya does not think that the Maeda clan with all its wealth and power had ambitions to rule the country. He points to the family crest, the Kaga umebachi, as proof. Adorning items like Toshinaga’s mortuary tablet and grave and Zuiryūji’s roof tiles, it depicts a plum, a symbol associated with Maeda clan ancestor Sugawara no Michizane. Early in Japanese history, an ancestral connection to Sugawara was considered a prerequisite for aspiring shōguns, but Yotsuya argues that by using the plum flower as the family crest, Toshinaga was not expressing his aspirations to lead the country, but his wish that the tumultuous years of war had finally given way to enduring peace.

Unlike his predecessor Toshiie, Toshinaga did not engage in heroic exploits, and he strove for peace in the land as he governed his great domain. It was the wisdom of the clan leaders that came after him to adhere to this philosophy that Kaga prospered for over 250 years. 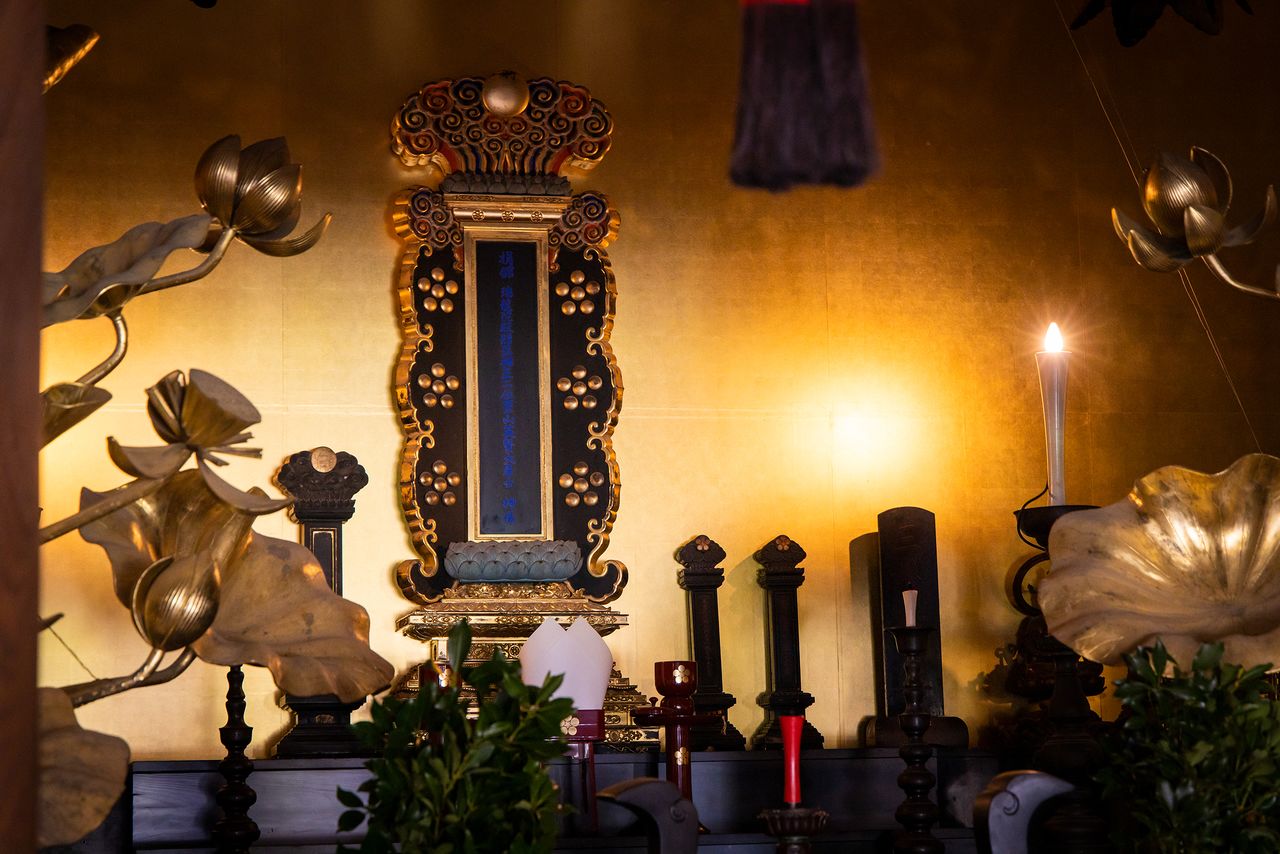 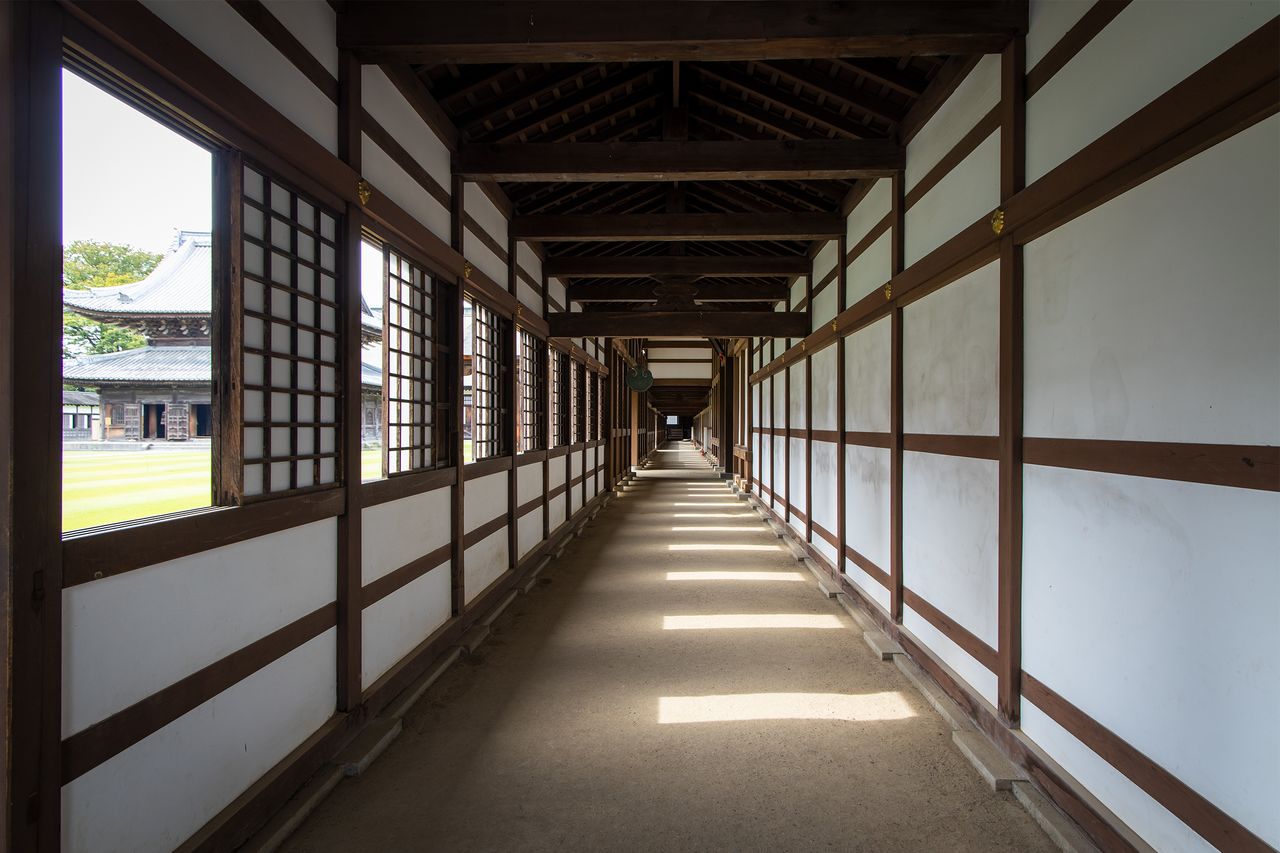