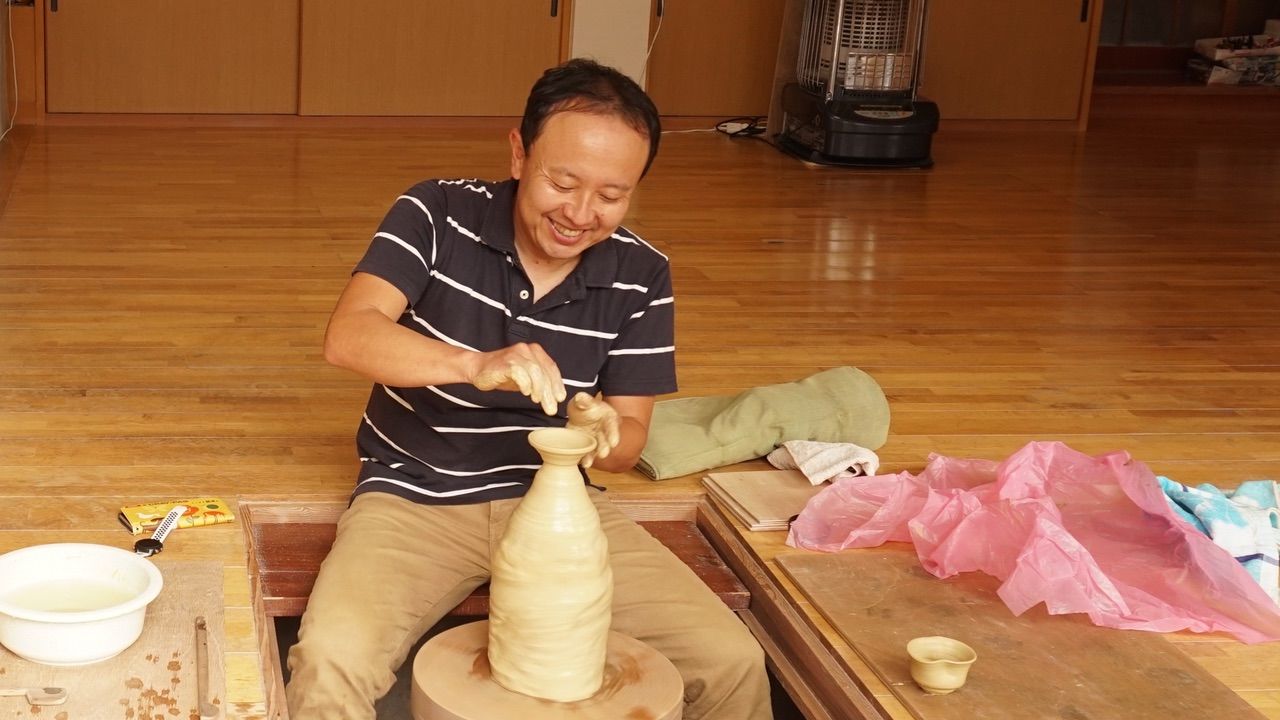 Travel Art May 18, 2021
The city of Hagi in Yamaguchi Prefecture is home to a ceramics style all its own. Local sake expert Jim Rion visits two master craftsmen to discover what informs their art and how their creations fit into the broader picture of Japanese pottery.

Hagi, Yamaguchi Prefecture, is home to a style of pottery known as Hagiyaki. Its history goes back to 1604, when the local lord Mōri Terumoto brought two potters—the brothers Yi Sukkwang and Yi Kyeong—from Korea to Hagi, where they established kilns to make pottery for the nobility. The tradition was born from the techniques they brought to Japan.

Hagiyaki displays warm tones brought out from the natural colors of the relatively coarse local clay, and glazes with very soft colors like pale salmon, white, and light blue. One of the defining characteristics of the style is a phenomenon called Hagi no nanabake, or the “seven transformations of Hagi.” The glaze on Hagiyaki is webbed with tiny cracks, or crazing, that allow matcha to gradually seep into the porous clay during use in the tea ceremony. This causes the pottery to shift in color over the years as acids in the tea react with the clay’s iron content.

These subtle changes, and the natural tones of the clay and glaze, have made Hagiyaki a prized style for traditional tea ceremony bowls. An apocryphal saying in the tea world apparently ranks Japan’s pottery centers thus: First Raku, second Hagi, third Karatsu. The area’s pottery has long had a devoted following domestically, and is increasingly popular abroad, as well.

But on closer look, the pottery of Hagi today does not always fit so easily into that tradition. In the twentieth century, particularly after World War II, the potters who work in this area have begun to resist the demands of tradition, seeking creative freedom as artists rather than simply as craftsmen creating teaware. 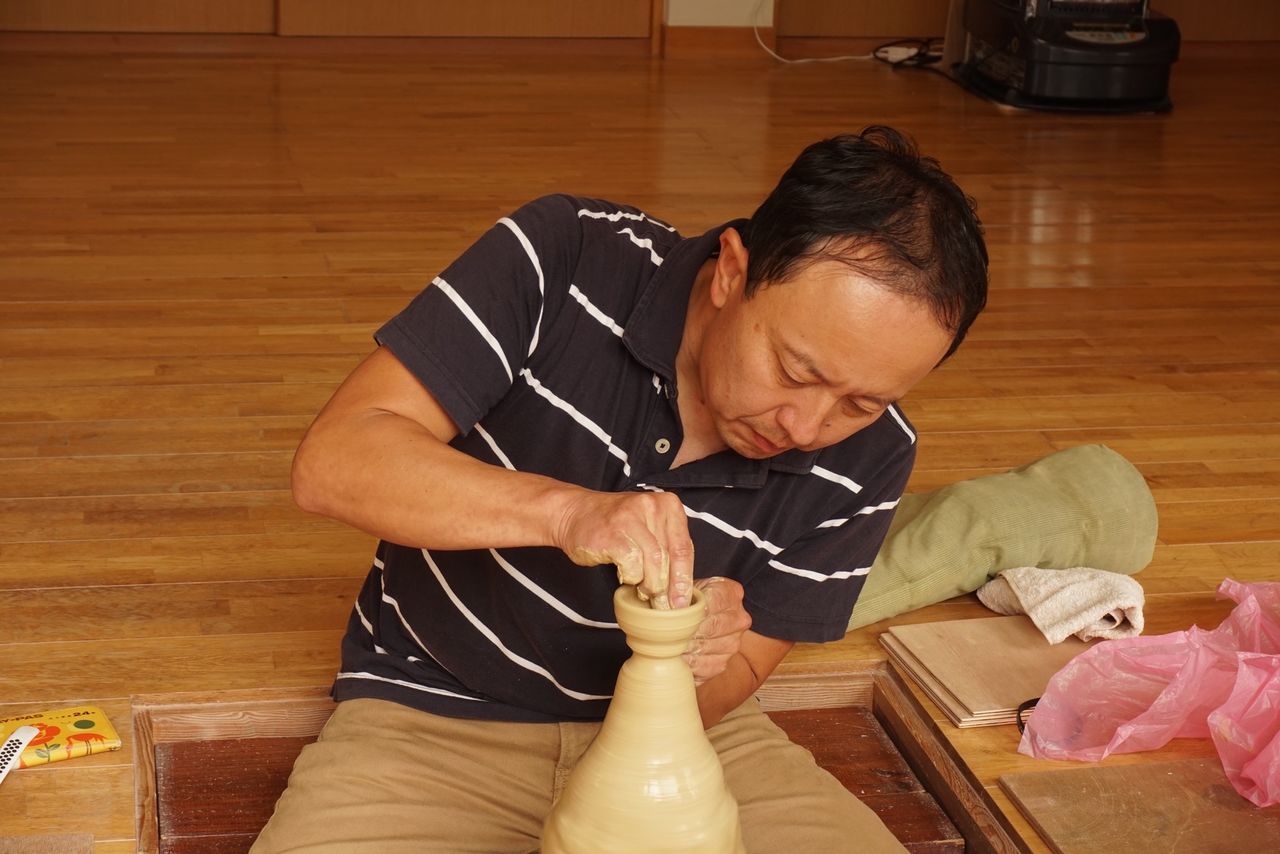 Hagi potter Hadano Hideo at work at one of his wheels.

Kaneta Masanao of the Tenchōzan kiln says, “After World War II, the children of the potter families started going to university and studying art. When they came back, then, they had new ideas about creativity and freedom that were restrained by traditional craft. Here in Hagi, the Miwa potters in particular were the vanguard of a new way of thinking.” He explains that Miwa Jūsetsu (Kyūsetsu XI) saw the work being done by artists in Kyoto and other increasingly creative pottery centers and was inspired to explore new expression in his pottery. This is how Kyūsetsu XI created Oni Hagi (devil Hagi)—a style that eschews the traditional softness of Hagiyaki with thick, clumped white glaze over heavy black clay.

Robert Yellin—owner of Kyoto’s Robert Yellin Yakimono Gallery, author, and lecturer on Japanese ceramics—says that artists like the Miwa family, and Kaneta himself, have been influential in introducing abstract cultural pieces to this traditional style on a wider scale. At the same time, Hagiyaki remains a relatively conservative, teaware-focused craft.

To further explore the balance between craft and art, I interviewed Kaneta and another prominent potter, Hadano Hideo of the Hadano Shigetsu kiln, about the balance of craft and art in their work.

Hadano Hideo was born in Hagi in 1971, and is the son of Saga Prefecture–born Hadano Zenzō, who studied pottery in Karatsu before coming to Hagi to specialize in the local style. Zenzō was named a Living Cultural Treasure by Yamaguchi Prefecture in 2002. Hideo studied art at Tama Art University in Tokyo, then went to Kyoto to study pottery specifically. He now works with his father at their kiln in the Hagi city center. According to Robert Yellin, his work builds on the traditional Hagi style that his father exemplifies, with novel approaches to texture and coloring, adding more sculptural elements as well.

When asked about his approach to balancing his work as objects to be used with creative pursuit, he saws “I always think first about using the cups or plates I make. For example, whenever I’m making a guinomi [large sake cup] I imagine how sake will taste from it, and how the shape of the rim will feel on the lips. Then, after firing, I always test one out myself!” He also fills tokkuri sake flasks to see how smoothly they pour, or gets a bottle of his favorite sake to give his guinomi a full test. “I don’t see a piece as finished without use. A plate isn’t a plate until you put food on it. How does the food sit? How does it look against the pottery? That’s all part of what I consider when I’m making something.” The challenge, then, is finding self-expression within that limit. 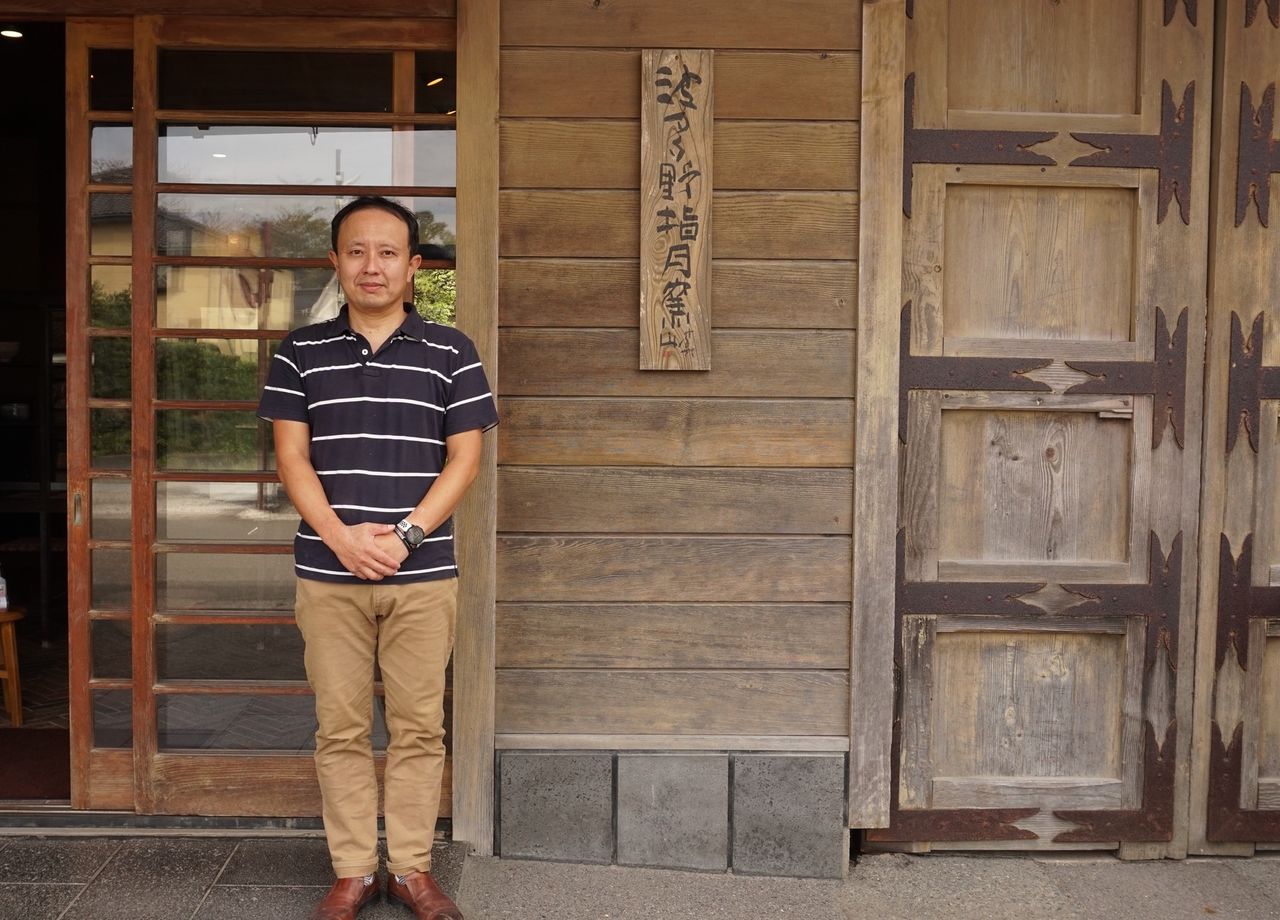 Hadano’s weathered workshop is the source of challenging pieces that meet both artistic and everyday needs.

Hadano’s works are distinct in shape, with clear touches of design and character. He adds art to his craft, while focusing on the craft itself. Artistic expression comes in the alteration of traditional shapes, layering texture with glazes, and experimenting with variations in natural clay. The pieces on display in the Hadano Shigetsu Gama gallery are all recognizable in function.

They are still distinct and often striking in form, though. “I do want to add artistic expression to my work. Sometimes, though, I find I get a little carried away. When some pieces come out of the kiln, I look at them and think I went too far.” In the large, though, the traditional craft guides Hadano’s work, and in fact he describes the tradition in almost reverential terms. “Pottery is a nexus of nature and culture, with clay shaped by skilled hands to fit people’s needs.” It connects to the very basics of life—eating and drinking. He says that tradition is his inheritance, and so it is worth preserving.

Kaneta Masanao was born in 1953. He is the eighth generation Kaneta potter to work in Hagi, and like many of his peers he studied sculpture at university before joining his father’s workshop. In 1983, he found himself dissatisfied with the traditional potter’s wheel and pioneered a technique called kurinuki, in which he beats lumps of clay into a desired shape and then carves out the interior with spoon and blade to create vessels, vases, and large sculptural pieces. It results in a style that is uniquely powerful, while still retaining the soft colors and texture of Hagi clay. 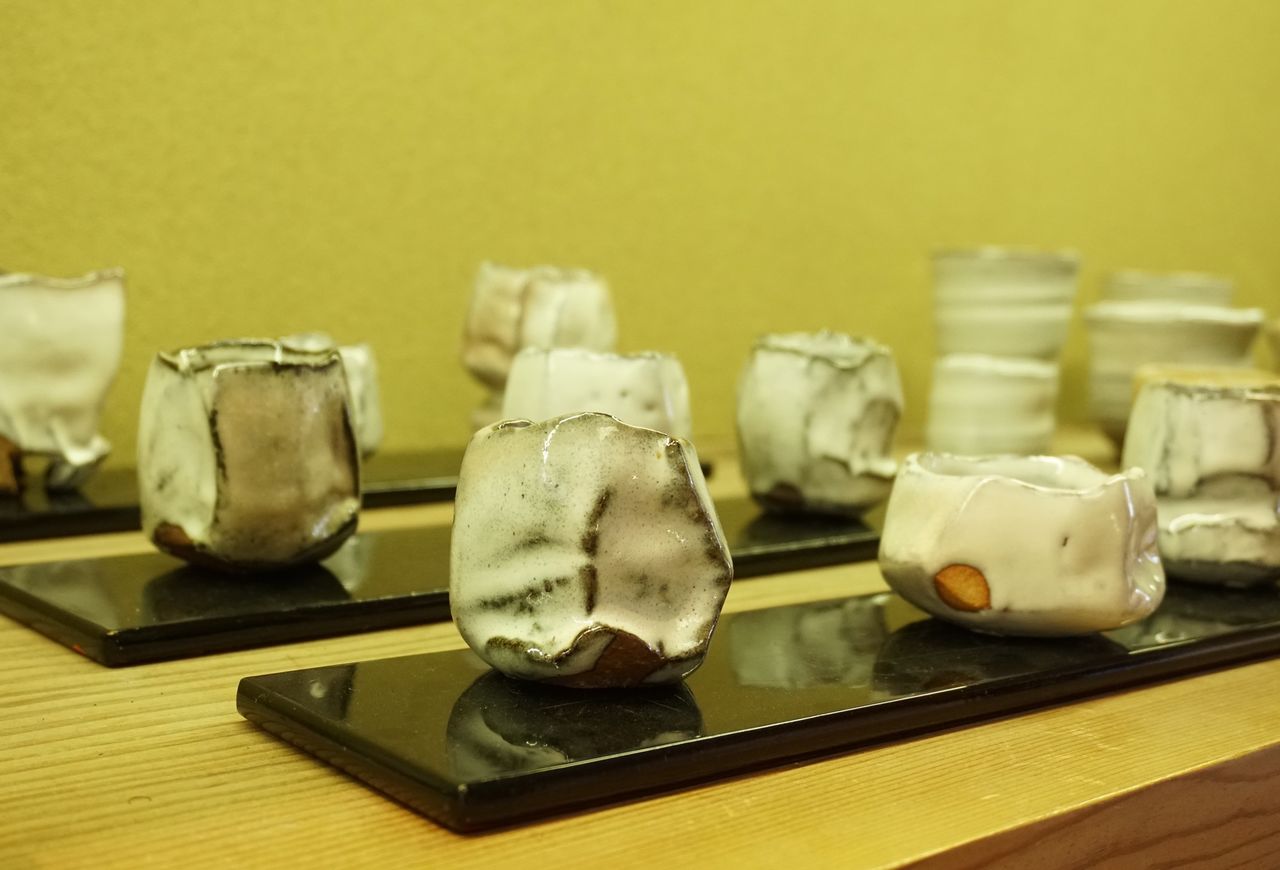 Kaneta’s work displays a daring sensibility while retaining the presence and coloring of the traditional Hagiyaki glaze.

When asked about his work, Yellin says, “Kaneta Masanao is a visionary ceramic artist who was, and still is, unafraid to move his ancient family kiln into the art world. Being an eighth-generation potter and seeing his father’s very, very traditional works, it took courage to break away from that and totally—and magnificently—reshape his family’s kiln and Hagi as well.”

“I put creativity first,” Kaneta says, when I ask him about balancing artistic expression with the eventual experience of the user. “I expect the user to put up with the pieces I make. I have to admit, some of my cups can be difficult to drink from. Take this guinomi for example. I can imagine that after a couple of drinks you might just get mad at it and throw it at the wall!” he laughs. The uneven lip and irregular triangular shape do seem to offer a challenge to regular use. Kaneta is creating art, so the form is primary, while function is almost an afterthought. In fact, he mildly chides me for even asking about the idea of balancing the two.

“I am creating. The consideration of function isn’t part of the conversation. In fact, sometimes, when I’m making a vessel I’ll start to wonder whether it would work better as a visual piece, and so I close up the opening and leave it like that. What I make doesn’t need a function. It is what it is. If you use it for something, then it becomes that function, and that’s up to you. What I want is to make something interesting!”

When I ask Kaneta to show me a piece that he finds most representative, he leads me to the entryway of his gallery. There is a small alcove there, and the centerpiece is a massive conical figure, almost a meter tall, made of rough orange clay, and hollow in the middle. It resembles nothing more than a volcano sculpted of clay. Such a piece could have no real function. It is far too big to be a vase, and the shape is too irregular to be a jug of any kind. Yet the aura of its presence is powerful, while the sculpted curves and jagged opening speak to strong artistic intent.

Still, Kaneta frames his creation as a struggle. “It’s a battle between what I want to do, and what the clay wants to do. The clay often wins. But sometimes, I win too easily, and the results just aren’t very interesting.” 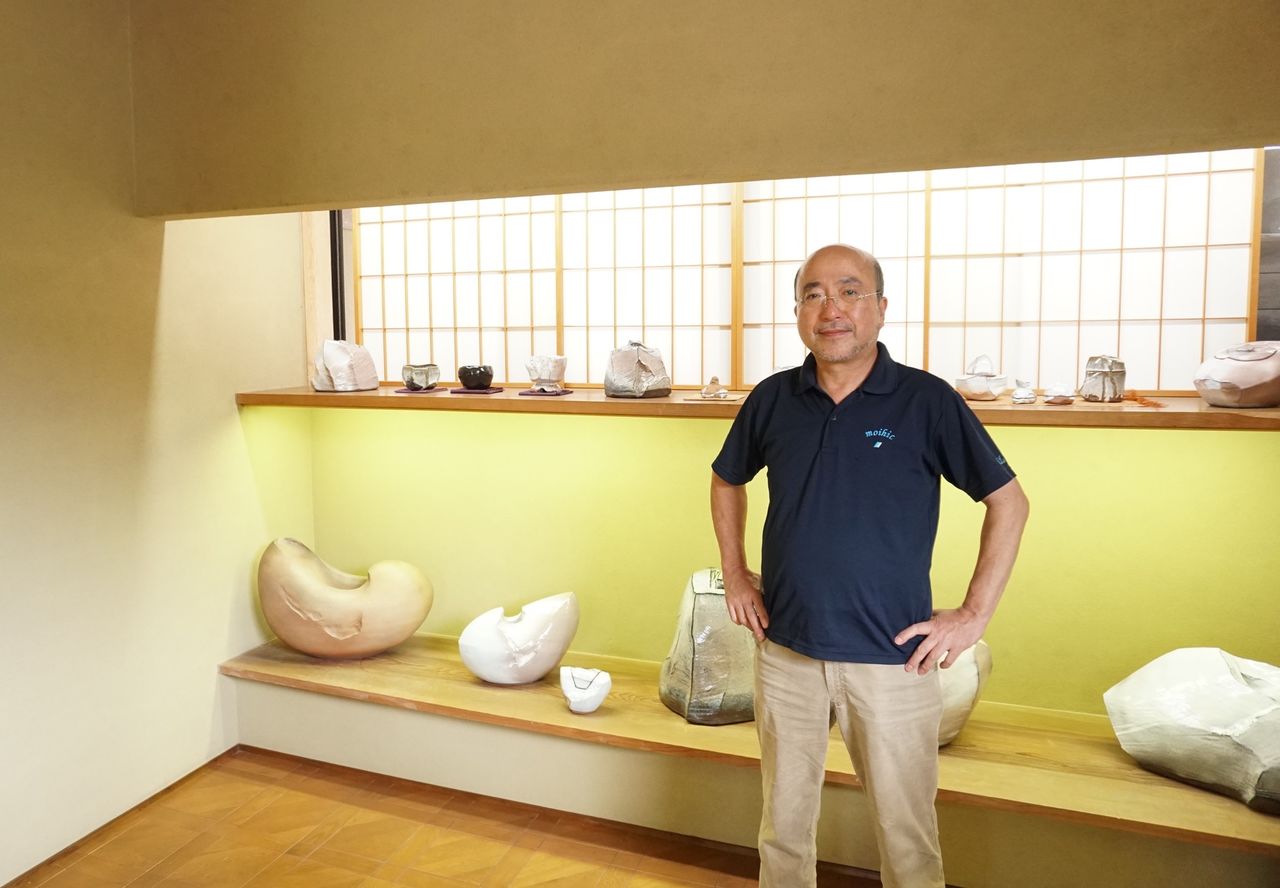 Kaneta Masanao with some of his gallery pieces.

The piece, and others in his gallery—large wavelike shapes that look almost reminiscent of magatama beads blown up to a meter in length, or like abstract boats balanced precariously on pedestals—seem to strain the limits of what Hagiyaki can be. They retain the warm tones of the clay, and the glazes recall those seen on other pieces, but the shapes and scale are unprecedented.

“When I started this style, there were older potters who refused to accept what I was doing as Hagiyaki. But I’m using Hagi clay and glaze, and working in Hagi. Of course it’s Hagiyaki!”

Toward a Hagiyaki Definition

Kaneta is not the only one who has struggled with definitions. Hadano Hideo also uses unusual colors and techniques in his work. There are heavy black clay guinomi with layers of pearlescent glaze, vases shaped like cubes balanced on one corner, and vivid orange rabbits that open to reveal bowls for traditional tea sweets. “They might not look like traditional Hagiyaki,” he says, “but it’s all local clay and local glaze.” So what else could it be?

This issue is not settled for the next generation of Hagi potters, either. “There are younger potters who can pick up the phone or send an email and get clay from anywhere, or glaze made from anything. There are new colors and new textures. But they’re still working here, so they’re making Hagiyaki. I don’t care what the old folks say!” says Kaneta, who, at 68, is himself a senior figure in modern Hagi pottery.

“Now, I’m old enough to not care if others accept my work, or how it’s labeled. My work is mine, whether you want to call it Hagiyaki or something else.” He does worry about one label, though. “I do wish people wouldn’t focus on labeling all this as pottery, though. Because it’s molded and fired, it’s just pottery. Why can’t it be sculpture?”

So, what is Hagiyaki, really? Is it any pottery made in Hagi? Or is it purely an evocation of those characteristics that connoisseurs value—the clay, the glaze, or the nanabake?

Wherever that definition might be found, artists like Kaneta and Hadano are walking their own paths within this tradition. Whether they are creating abstract art, or meticulously crafted tea bowls, their work is wholly their own, and yet still rooted in over 400 years of tradition.