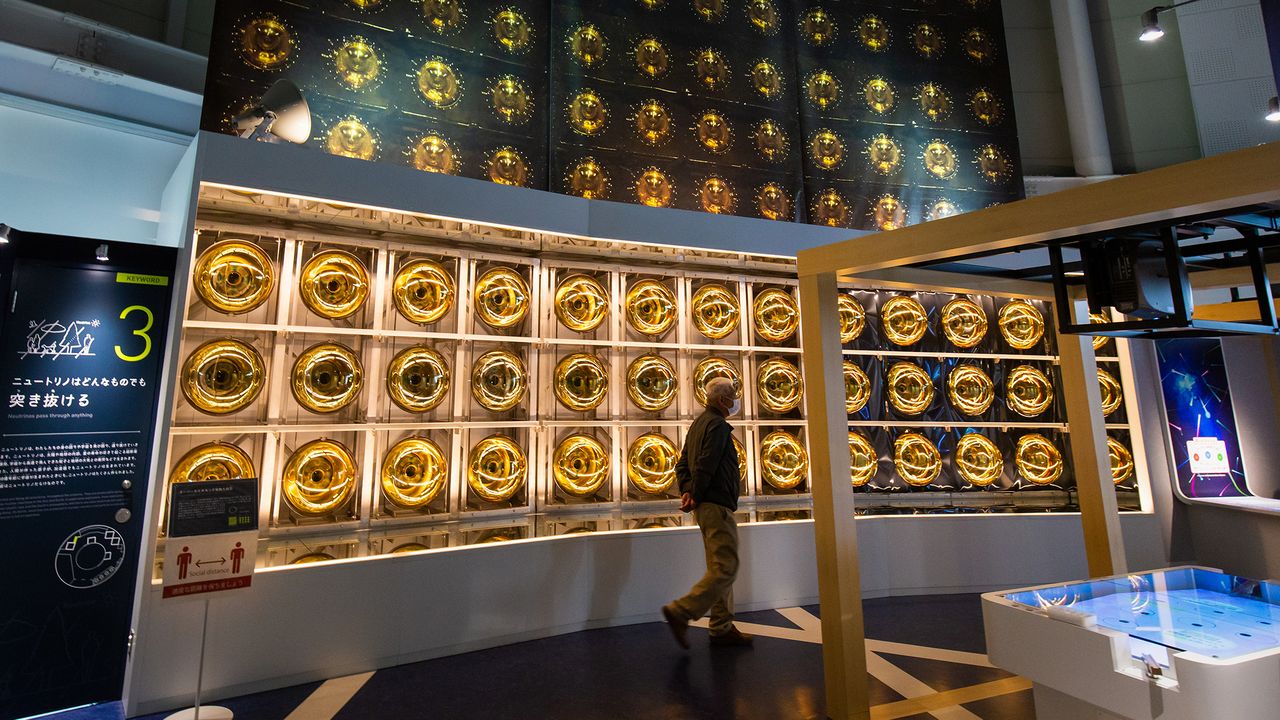 KamiokaLab: Not Your Average Highway Stop

Science Travel Feb 22, 2021
A highway rest stop with a difference, Gifu’s Sky Dome Kamioka allows visitors to learn about astrophysics while they take a break from driving. The adjacent KamiokaLab science museum offers a host of easy-to-follow exhibits concerning the Super Kamiokande observatory.

From Mining Town to Astrophysics Hub

Kamioka once prospered as a mining town. These days, this retro locale, now part of the city of Hida, Gifu Prefecture, is being rediscovered as a place to explore on foot. However, the Skydome Kamioka rest stop, visited by many visitors to the area as well as those on their way to the Chūbu Sankgaku National Park, is home to a facility you would never expect to find in a wayside stop: KamiokaLab, the Hida Space Science Museum. The museum is packed with displays on the latest discoveries in the field of astrophysics. 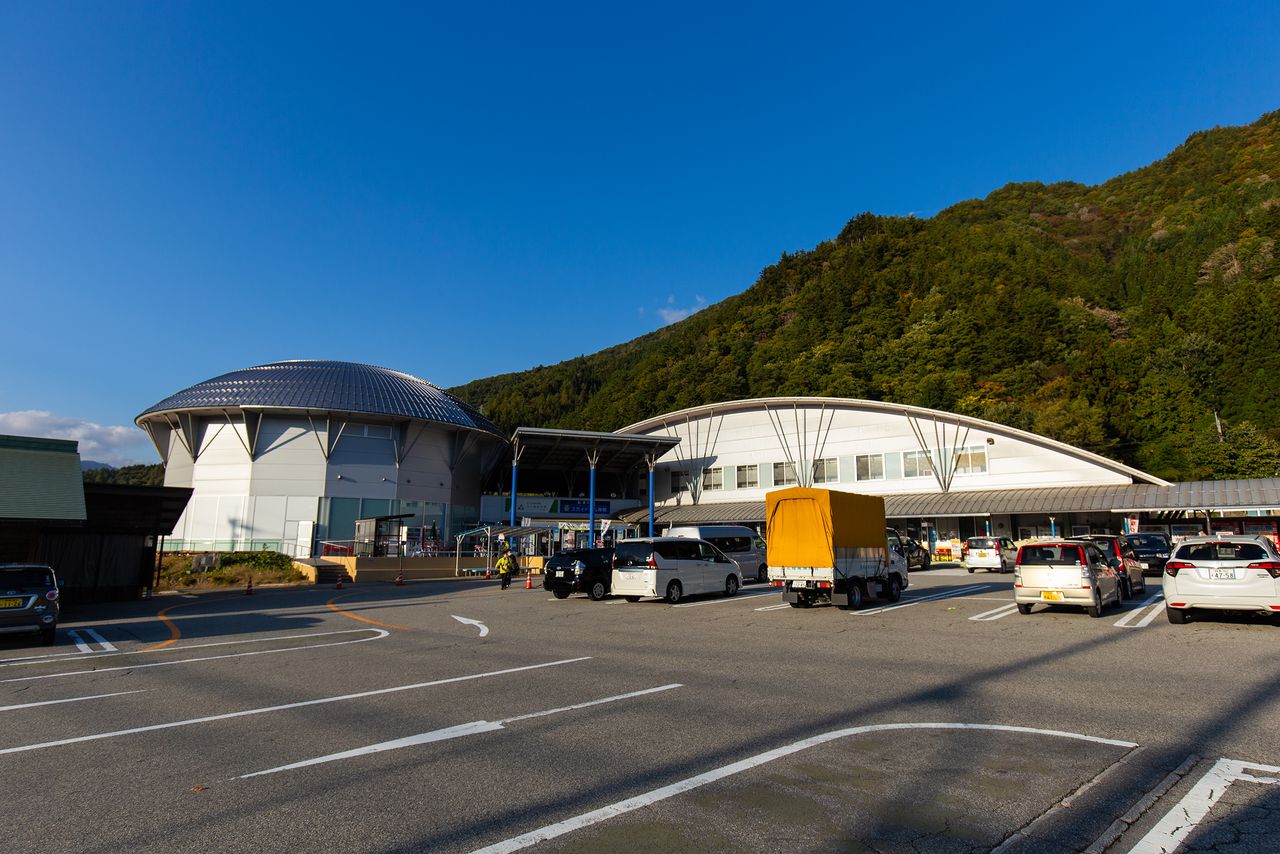 Skydome Kamioka (center) and KamiokaLab (the domed building on the left). 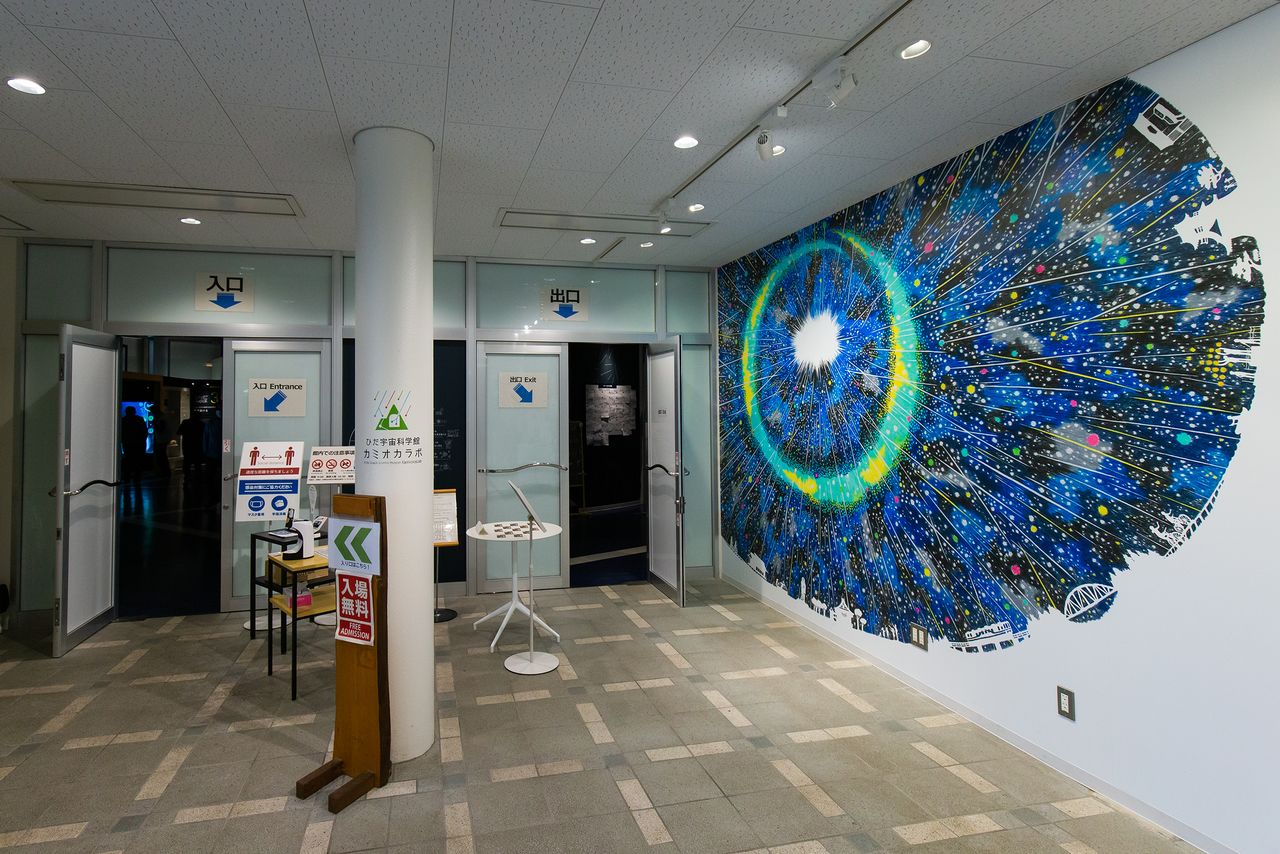 The entrance to KamiokaLab. Admission is free.

The unusually named Kamiokande and Super Kamiokande observatories gained international renown first in 2002, when Koshiba Masatoshi won the Nobel Prize for physics for his discoveries there, and then again in 2015, when Kajita Takaaki was similarly honored. The name “Kamiokande” was made by combining the observatory’s location, Kamioka, with the first letters of the words Nucleon Decay Experiment, as Kamiokande initially aimed to demonstrate proton decay. When Kamiokande failed to observe any instances of this decay, though, project director Koshiba decided to focus on the observation of neutrinos instead. This led to the successful observation of a supernova explosion and a Nobel Prize.

It was Kamiokande’s successor, Super Kamiokande, that enabled Kajita to discover neutrino oscillation. “Super” is a reference to the fact that increasing the volume of water in the tank by a factor of 10 has greatly increased the amount of data observed. The “NDE” on the end of Kamiokande came also to stand for Neutrino Detection Experiment. 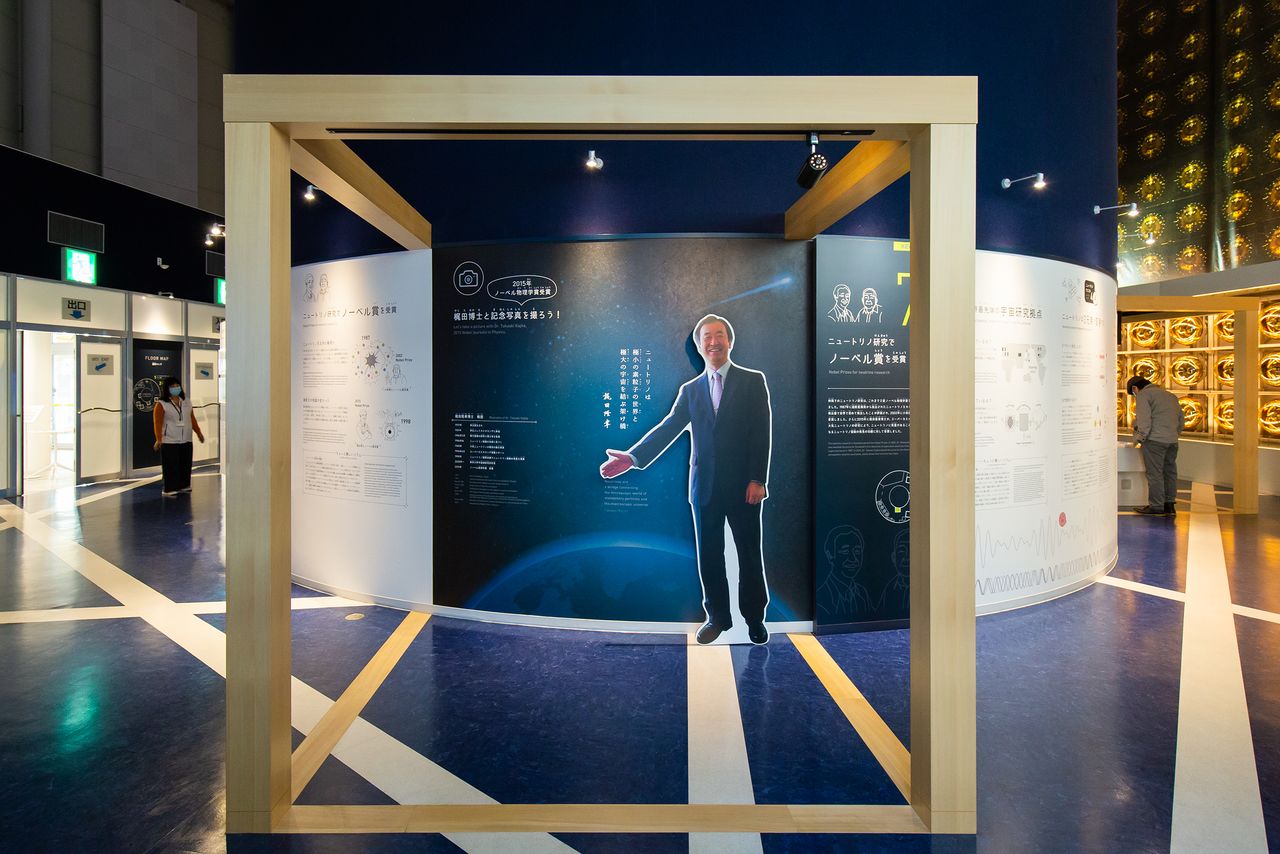 Visitors can take their photo with a cutout of Nobel-winning physicist Kajita.

It is difficult for a layperson to understand neutrinos or the workings of Super Kamiokande. An operational observatory, Super Kamiokande can only be viewed by small groups at very specific times. KamiokaLab was established to share the objectives and appeal of Super Kamiokande—the research center that is the pride of Kamioka—more accessibly, with a wider audience. 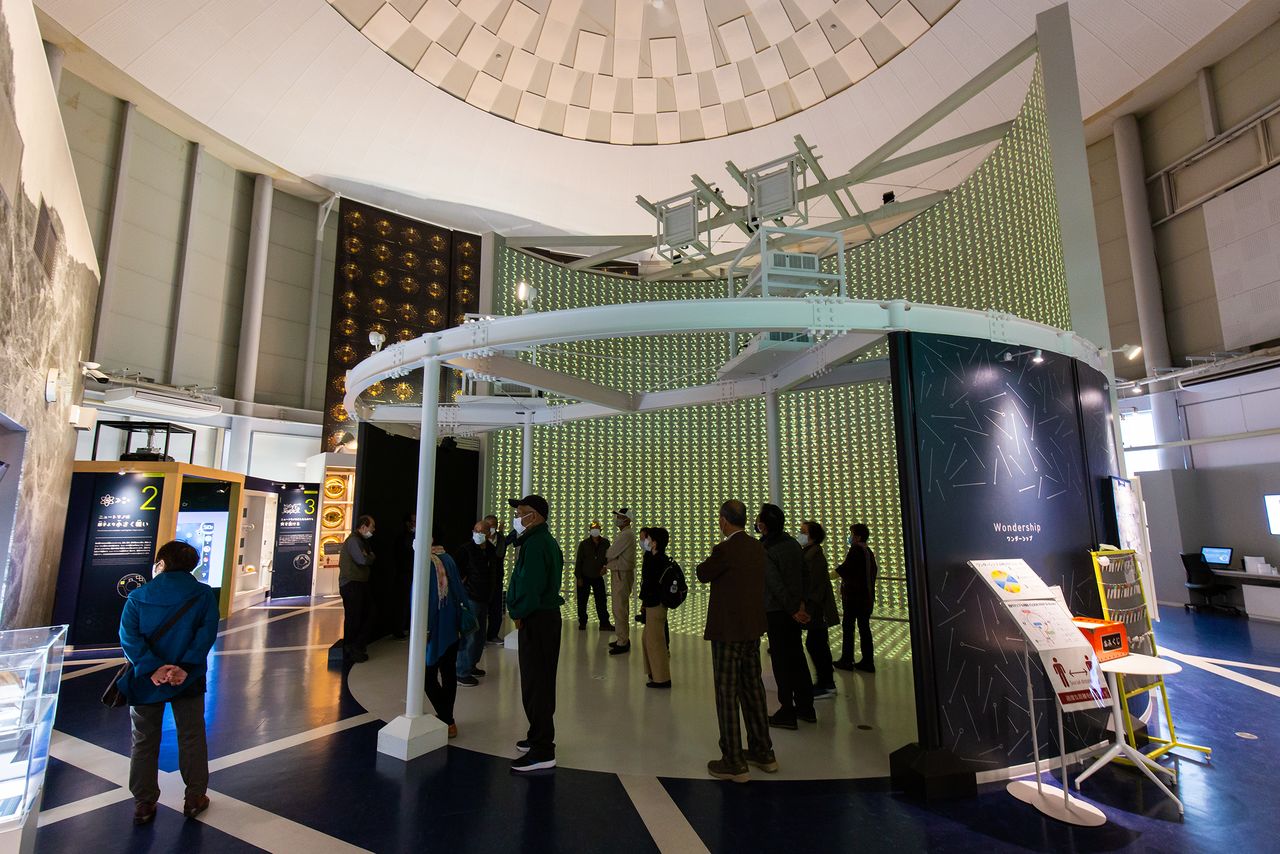 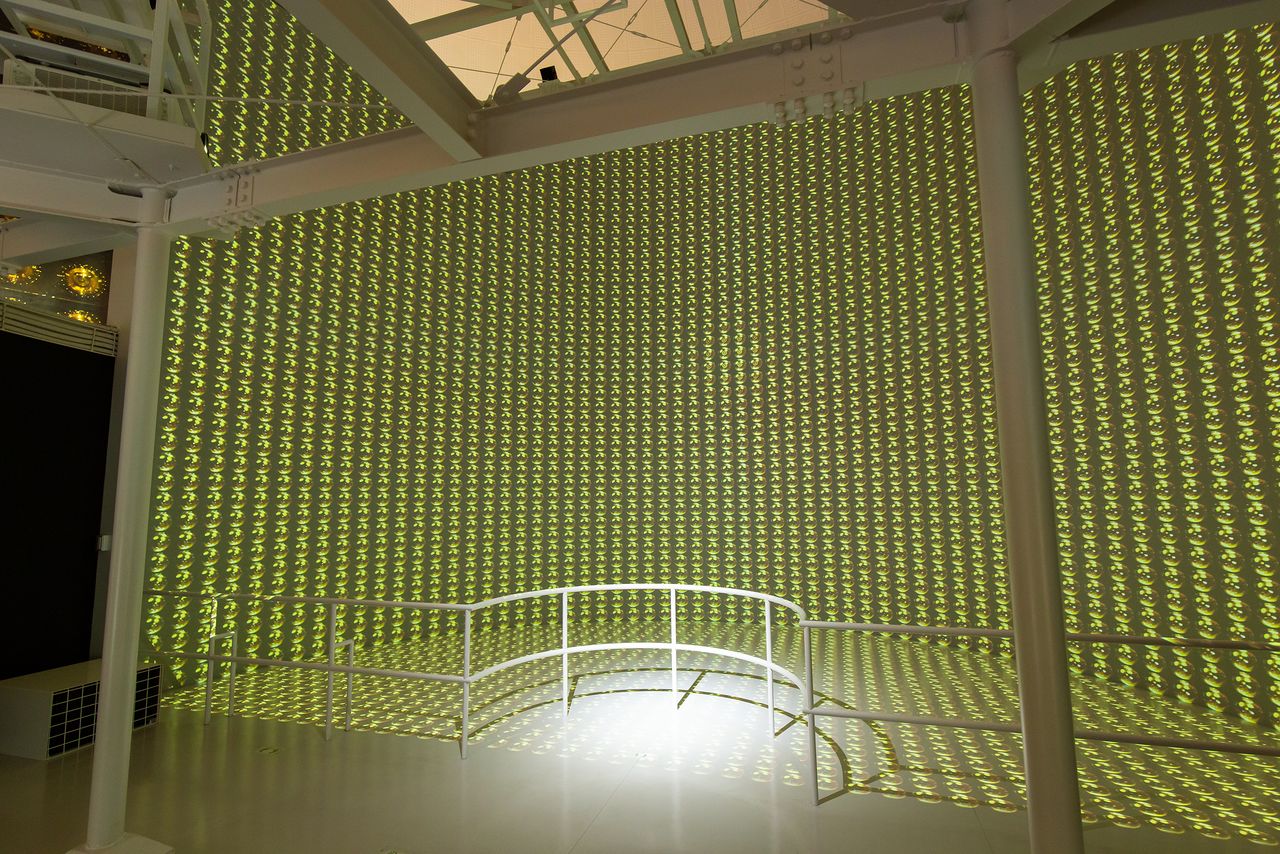 The huge Wondership theater is a good spot for taking photographs to mark your visit.

Neutrinos are subatomic particles that have no electric charge. Emitted constantly by the sun and other stars, these particles are also created when cosmic rays collide with the Earth’s atmosphere. Particularly large quantities are emitted when a supernova explodes at the end of its life. In other words, space is full of neutrinos.

More than a million times less massive than an electron, neutrinos pass through all matter while travelling at near the speed of light. Every second, hundreds of trillions of these particles pass through our bodies. Very occasionally, however, a neutrino collides with another particle, releasing a faint light, which can be captured by Super Kamiokande. 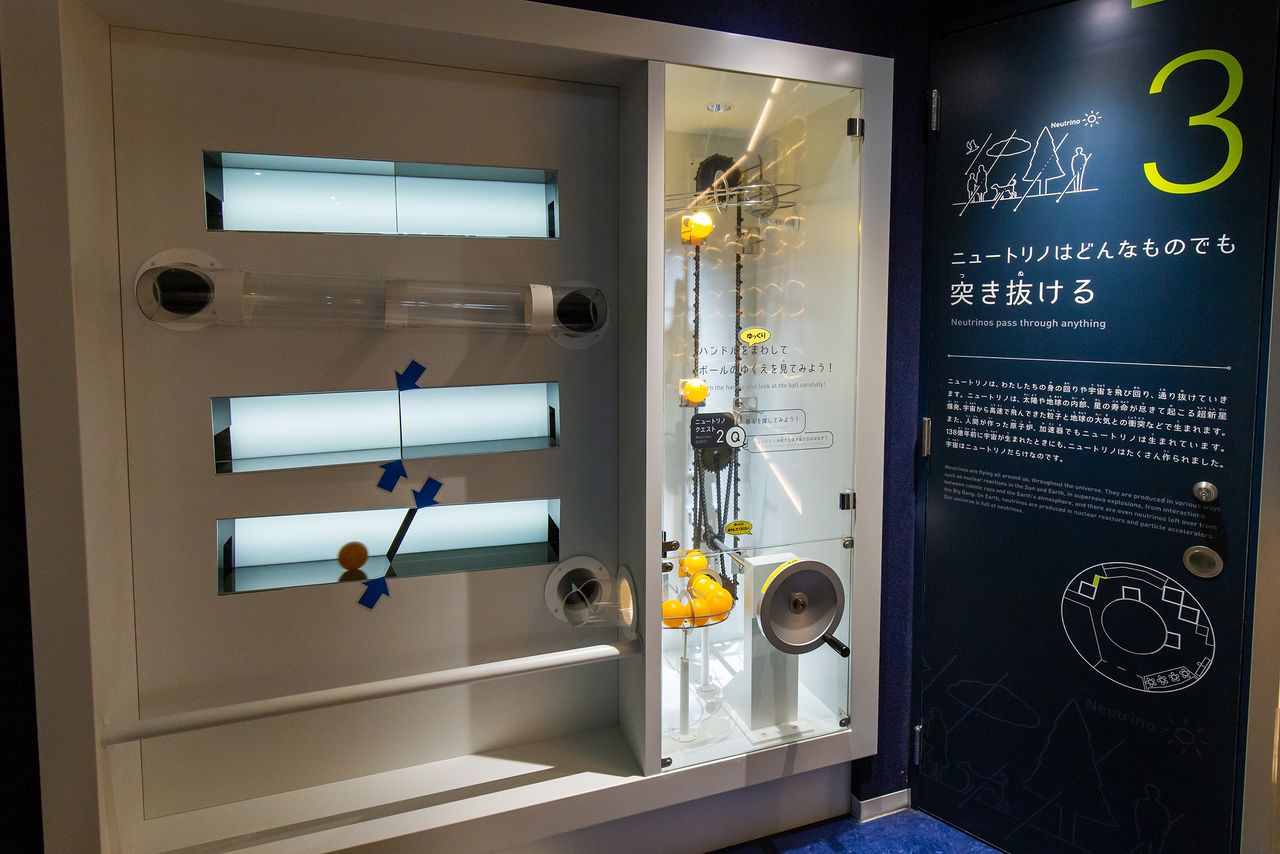 This exhibit is a fun way to learn about the properties of neutrinos. 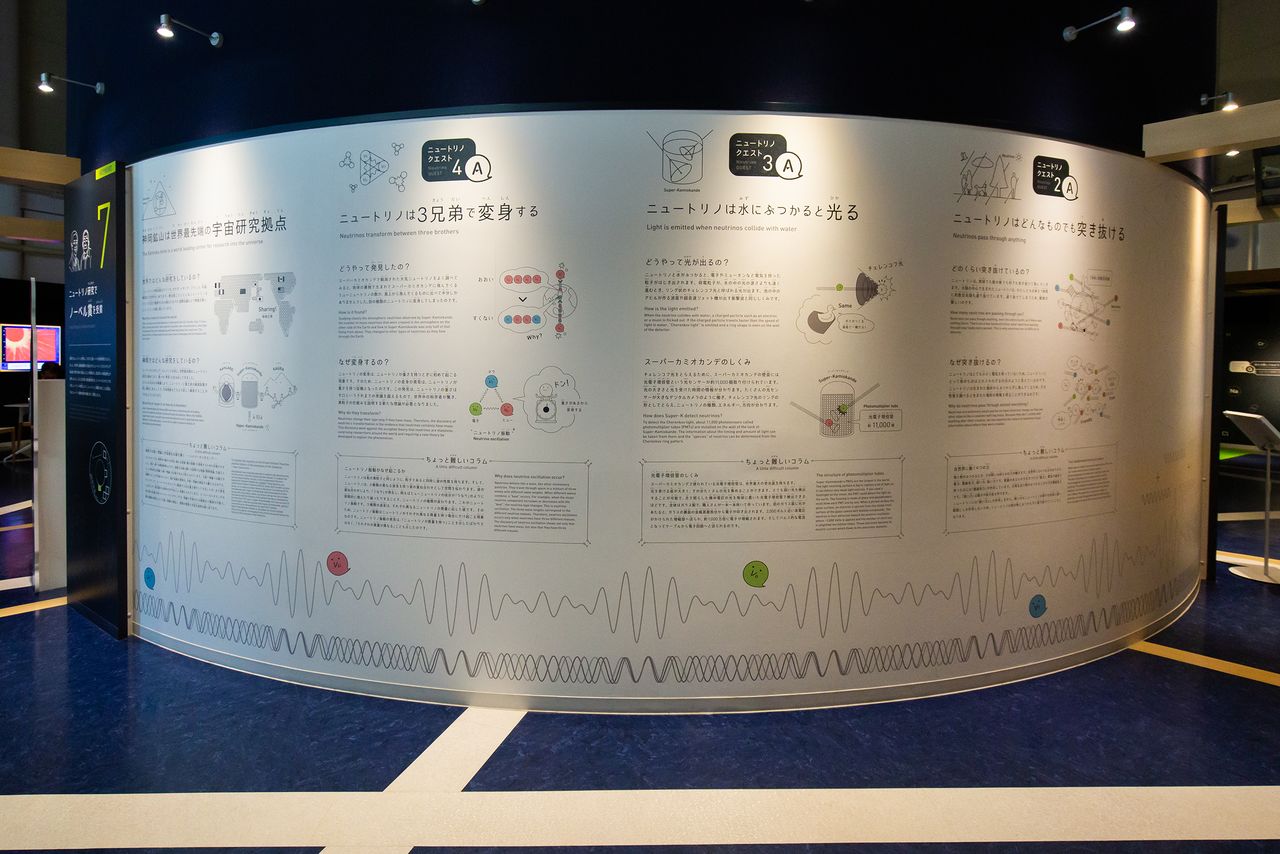 Panels on walls and columns contain easy to follow information on Super Kamiokande and neutrinos.

Super Kamiokande contains 50,000 metric tons of ultrapure water and is fitted with 11,129 photoreceptor tubes. Every day, the observatory manages to observe the energy and direction of incidence of around 20 neutrinos from the sun and around 10 from the atmosphere, by detecting the Cherenkov light than that neutrinos emit upon reacting with water molecules. These observations have answered questions about outer space, today and in the past, and about what happens inside stars. 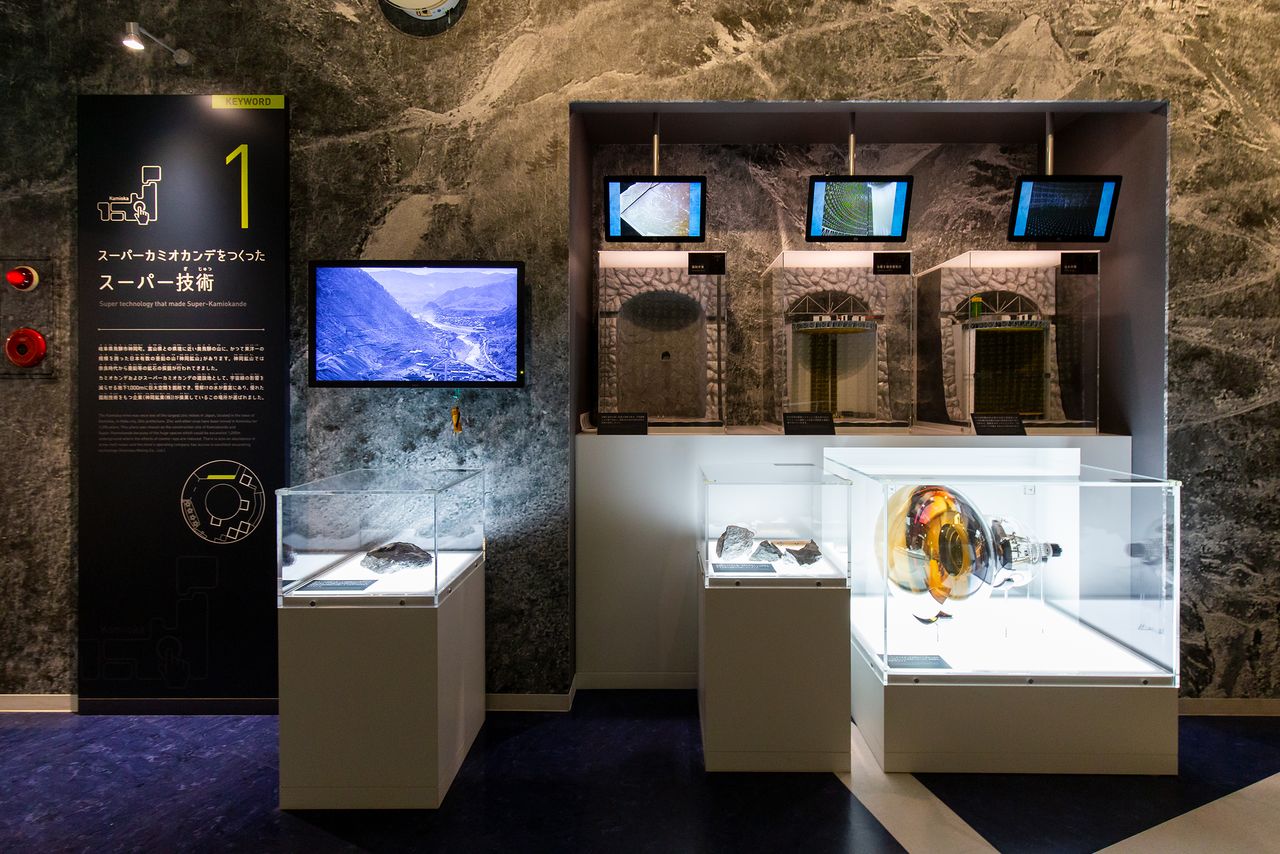 This exhibit combines images of the construction of the observatory with actual photomultiplier tubes. 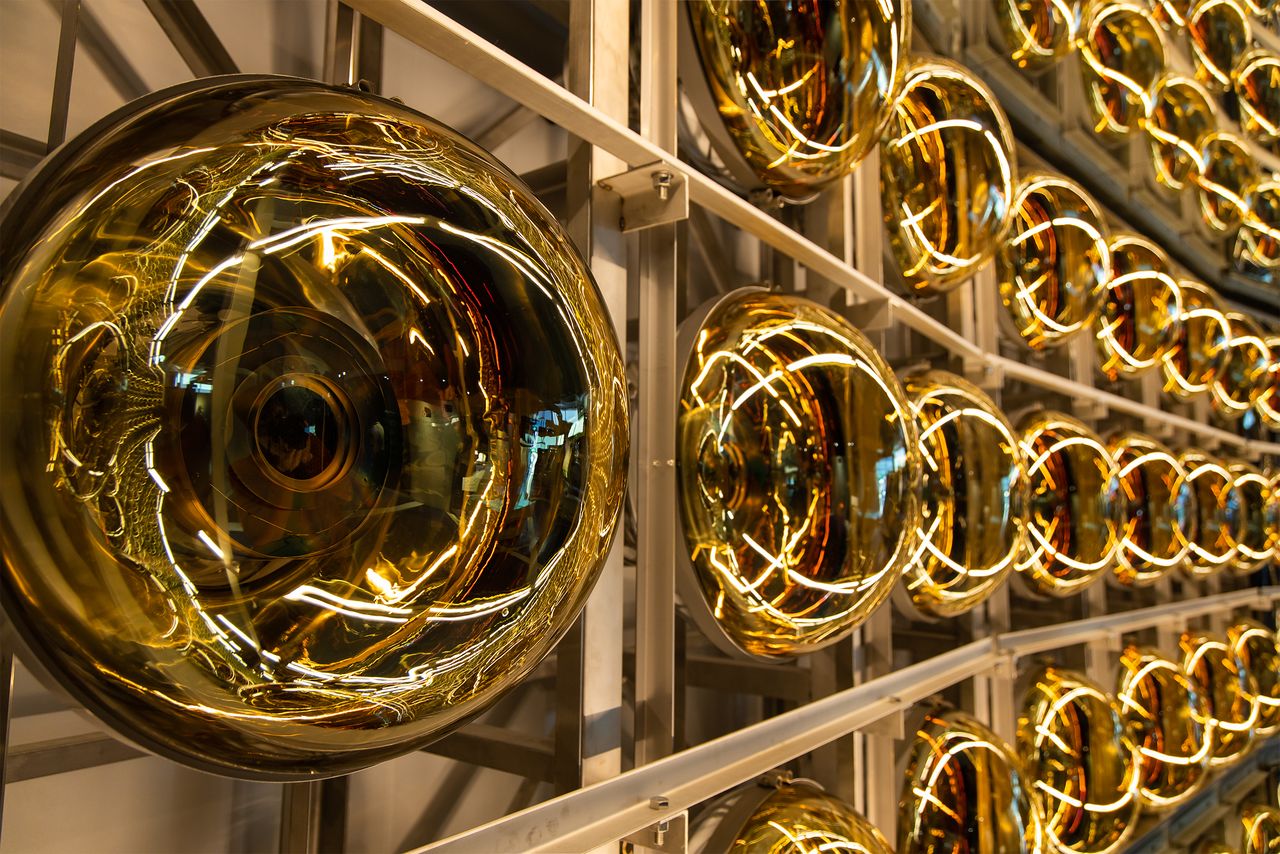 An array of photomultiplier tubes. 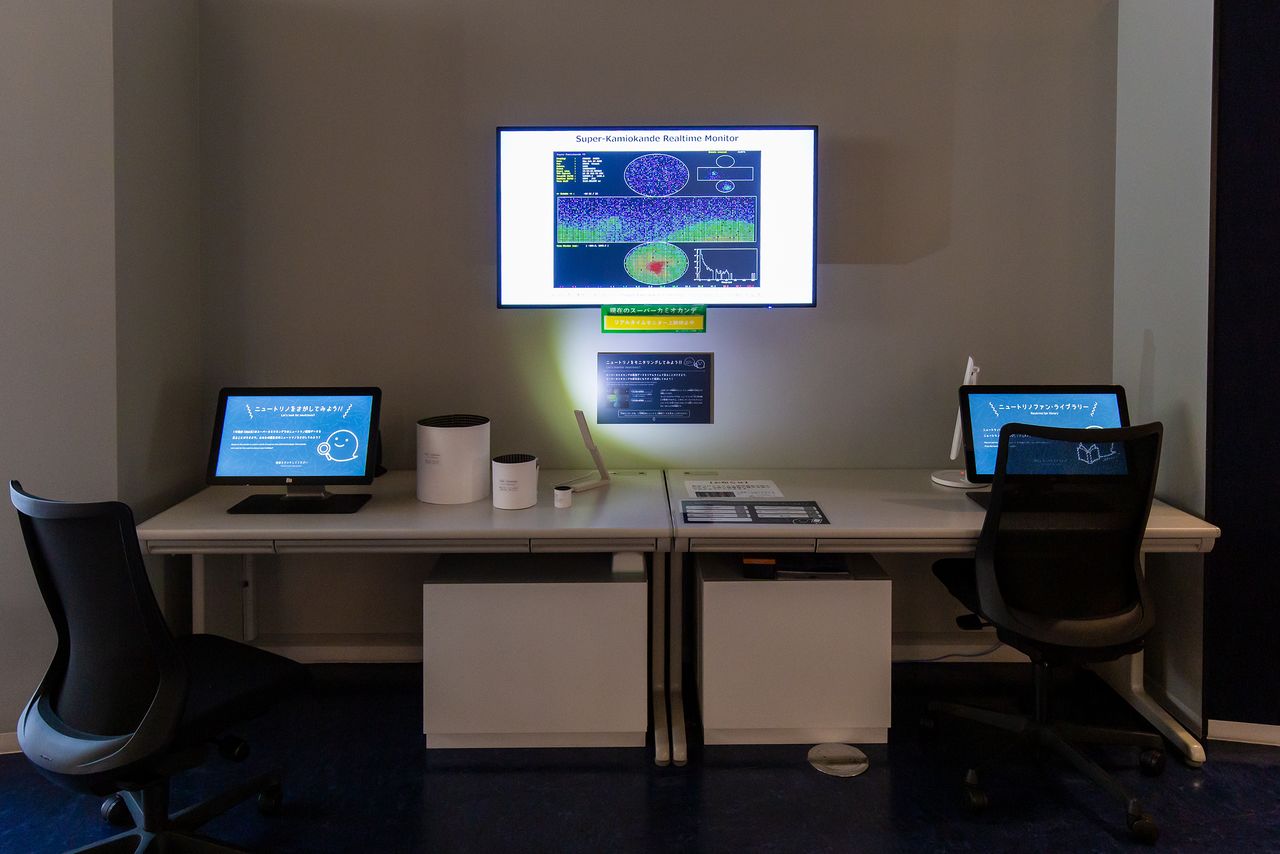 The KamiokaLab displays data from observations performed by Super Kamiokande in real time.

For neutrino observation, the observatory needed to be built under a thick layer of rock in order to eliminate interference from the other particles that travel through the Earth’s atmosphere to the greatest extent possible. The Kamioka mine was an ideal location, offering scientists an existing mine shaft that goes 1,000 meters below ground and a ready supply of clean water.

The exhibition concludes with a board containing autographs of Koshiba and other notable scientists, as well is a handwritten message of gratitude from Kajita to the community of Kamioka.

In 2027, when Super Kamiokande’s successor—Hyper Kamiokande, boasting over five times the capacity at 260,000 metric tons—is completed, Kamioka may be able to bring further discoveries to the world. 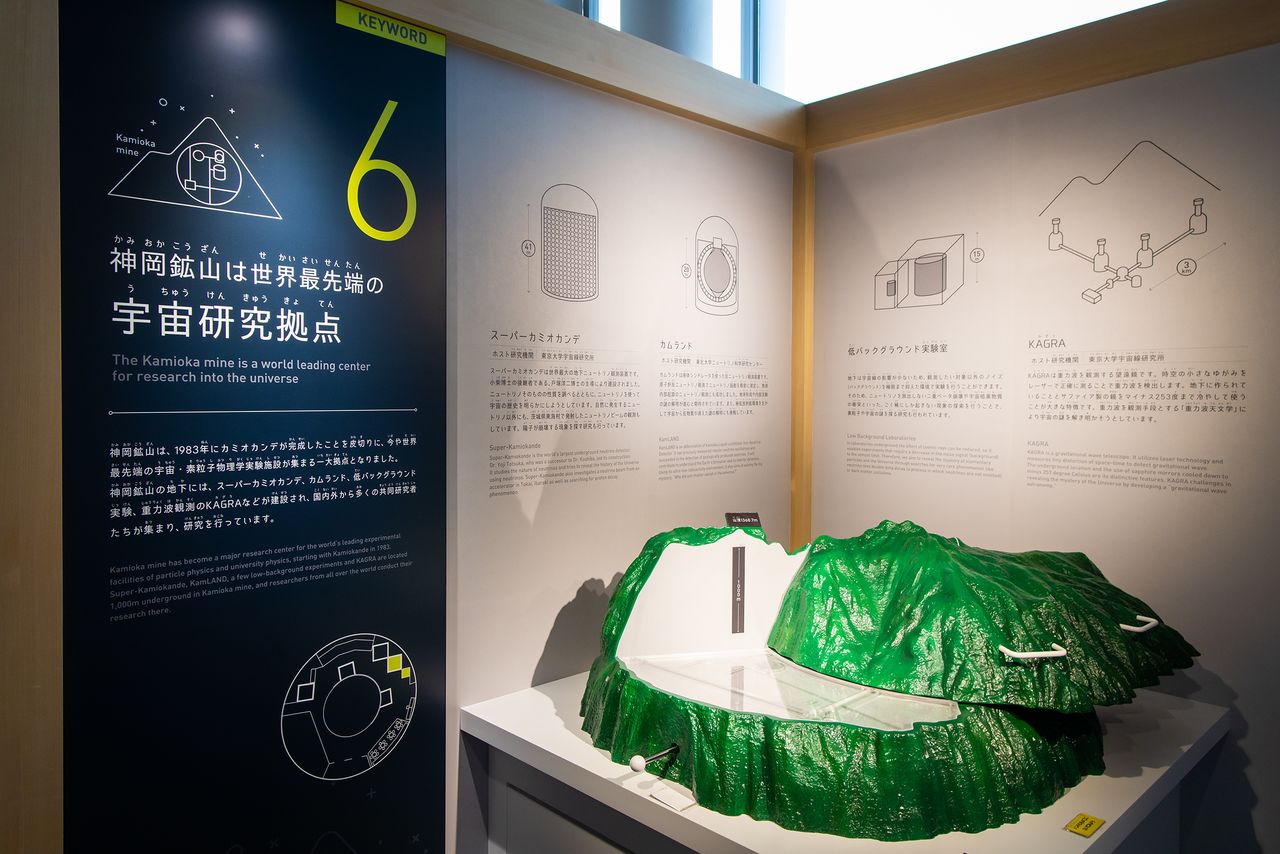 In addition to the Super Kamiokande Observatory, Kamioka is also home to the KamLAND antineutrino detector and KAGRA, a large-scale cryogenic gravitational wave detector. 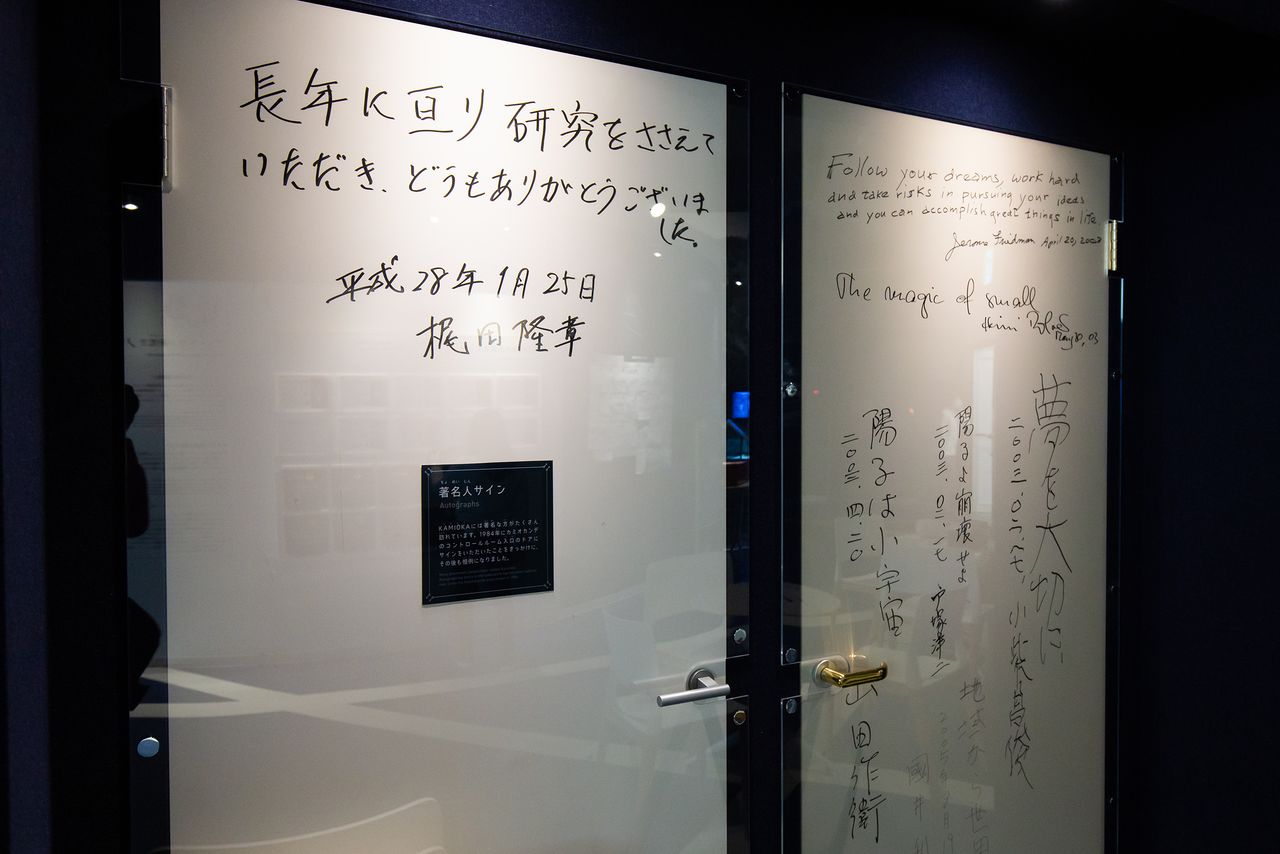 Autographs and messages from Kajita Takaaki, at left, and other prominent scientists.