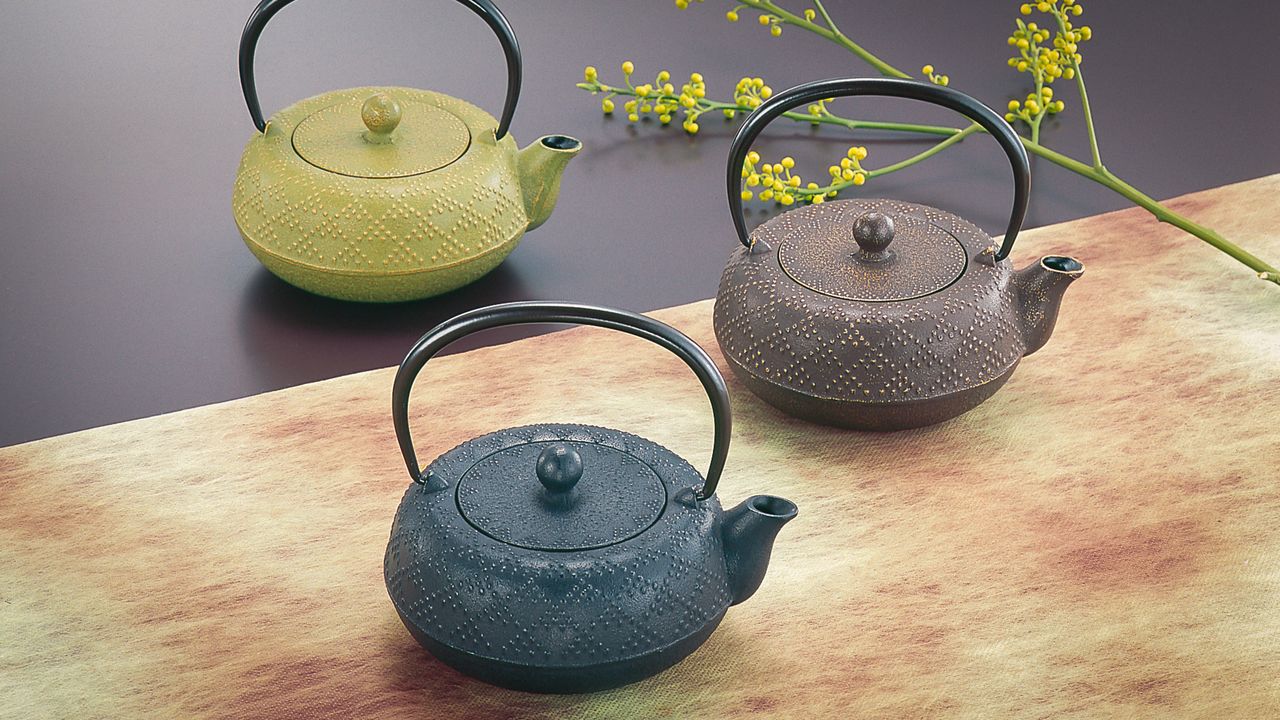 Travel Feb 26, 2021
Morioka, Iwate Prefecture, is a center for the traditional craft of Nanbu tekki, or cast ironware. One of the city’s many iron casters, Iwachū, has expanded beyond heavy black teapots with a range of vivid tea kettles and decorations made with an original color enameling technique, finding many fans in Western and Chinese markets.

For many in Japan, the name Nanbu tekki conjures up images of heavy, black, cast-iron tea kettles. Overseas, though, this name, along with “Nanbu ironware,” has become synonymous with colorful iron teapots, and in many European boutiques they are known simply as Iwachū.

Iwashimizu Suekichi founded the Iwachū iron casting workshop in Morioka, Iwate Prefecture, in 1902. After nearly 120 years in business, it has certainly become an established name in the industry, but compared to the 400 years of Morioka’s Nanbu ironware history it still remains a newcomer, which might help explain the spirit of melding tradition and innovation it brings to the traditional craft. Given its modern designs and flexible management strategies, Iwachū may not seem much like a traditional craft maker, but Iwashimizu Yayoi, the firm’s current president, is quick to say: “Iwachū’s greatest asset is the wealth of tradition and local history we have built.”

In 1967, it became the first iron casting works to bring automation to the shop floor, and around the same time was the first cast-iron workshop to allow visitors. It became part of local sightseeing tours, helping its name recognition and sales to rise. In 1990, it also became the first Nanbu tekki workshop to bring color to its products. It then began expanding into foreign markets, where those same colorful teapots are now hugely popular. 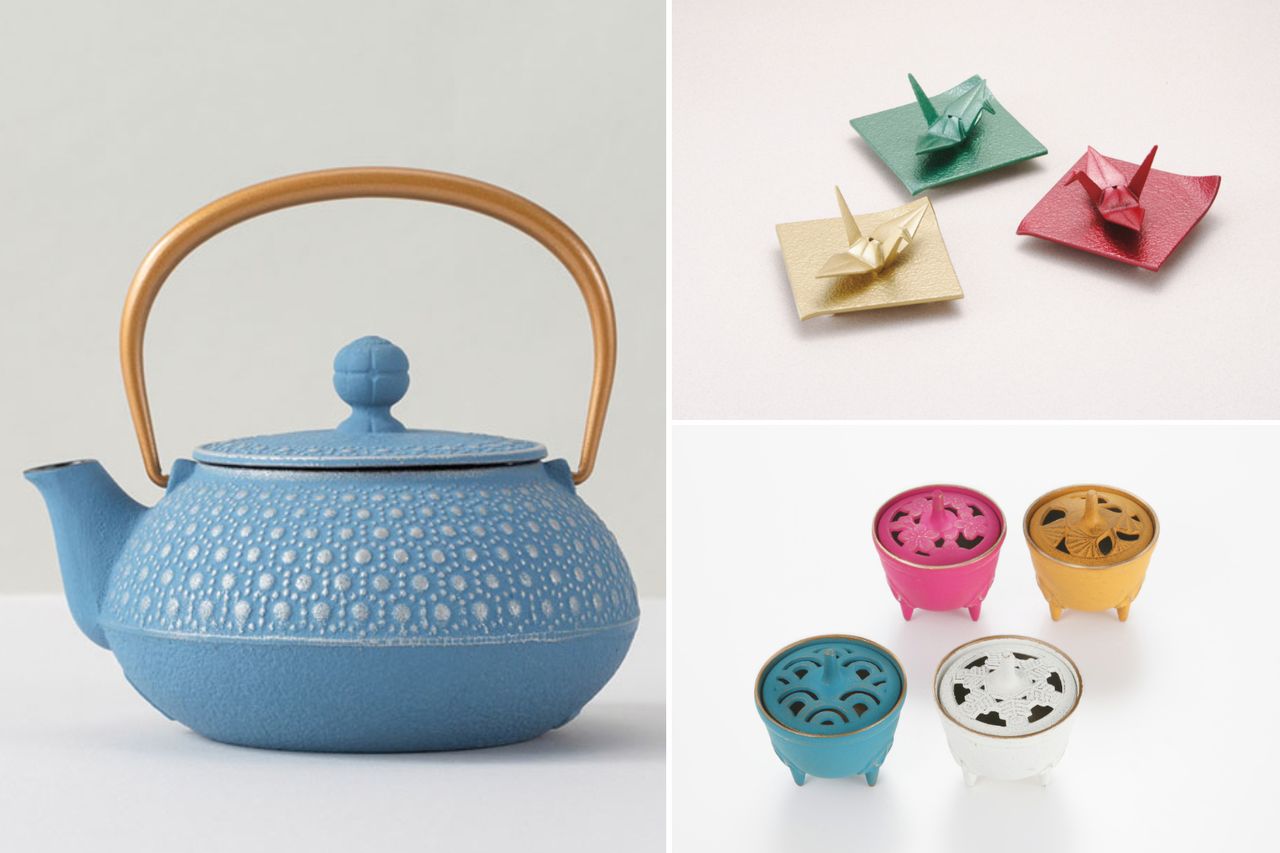 Iwachū employs six artisans—including one who is a certified dentō kōgeishi, or traditional craft worker—who carry on traditional production methods and techniques. Iwachū has a museum in the outskirts of Morioka, the Iwachū Tekkikan, with exhibits on Nanbu tekki manufacturing and history,and the city’s culture and landscape. The museum collection features traditional tools used in iron casting and a giant tea kettle, and there is an attached workshop where employees demonstrate their skilled craft. 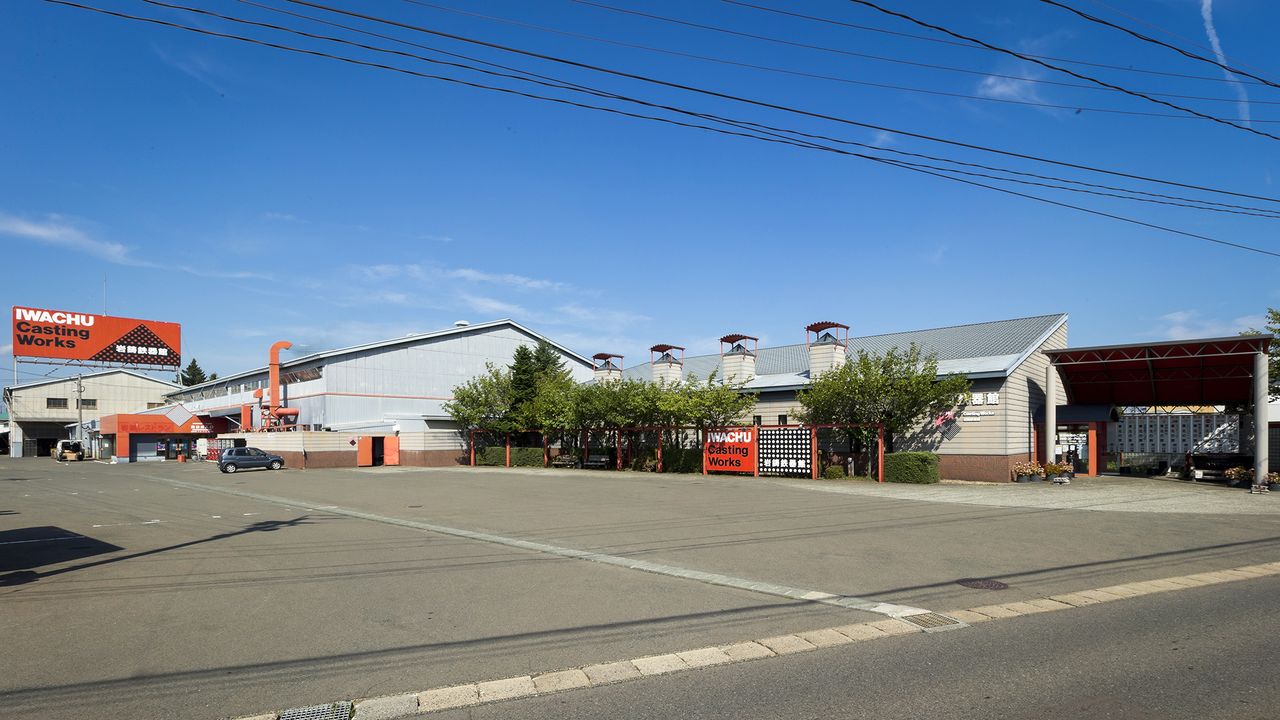 Nanbu cast iron work dates back to the early Edo period (1603–1867), when the Nanbu lords of the Morioka domain recruited casters from Kyoto and Kōshū (modern Yamanashi Prefecture). In the eighteenth century, the spread of tea drinking led to the common use of small, handled iron tea kettles. Those tea kettles served as the original model for Iwachū’s current traditional kettle. 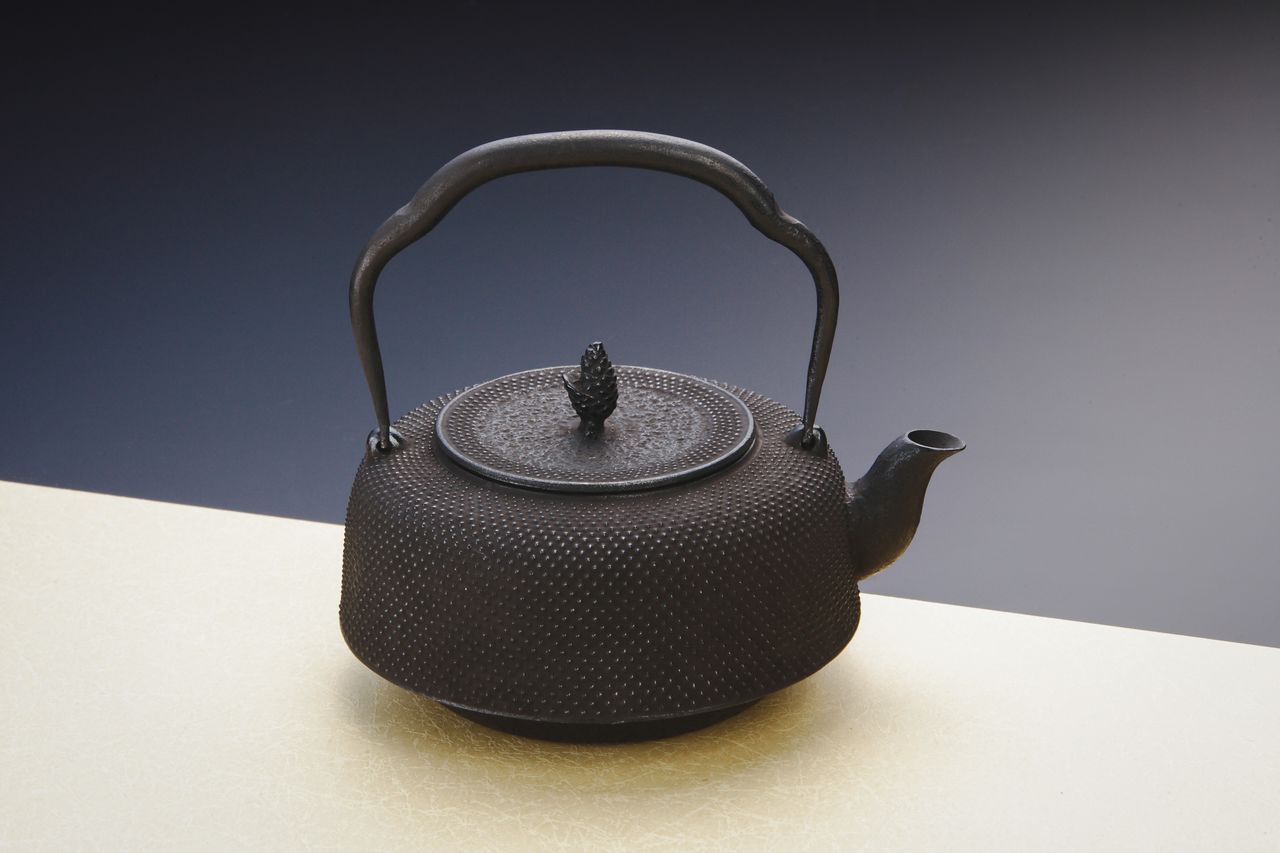 The countless dots lining the surface of this tea kettle are known as an arare pattern. It is a technique handed down from past generations to add mass to the iron for better heat retention. (© Iwachū)

Nanbu tekki kettles are made more practical by the highly skilled craft behind them. For example, the high-temperature charcoal firing kamayaki technique creates an oxidized layer on the inner surface to help prevent rust. Skillful production also keeps the walls relatively thin, so they weigh up to 30% less than mass-produced iron kettles, despite their heavy looks. The workshop uses over 100 such manufacturing techniques to help make each piece a practical, attractive work that will last a lifetime. 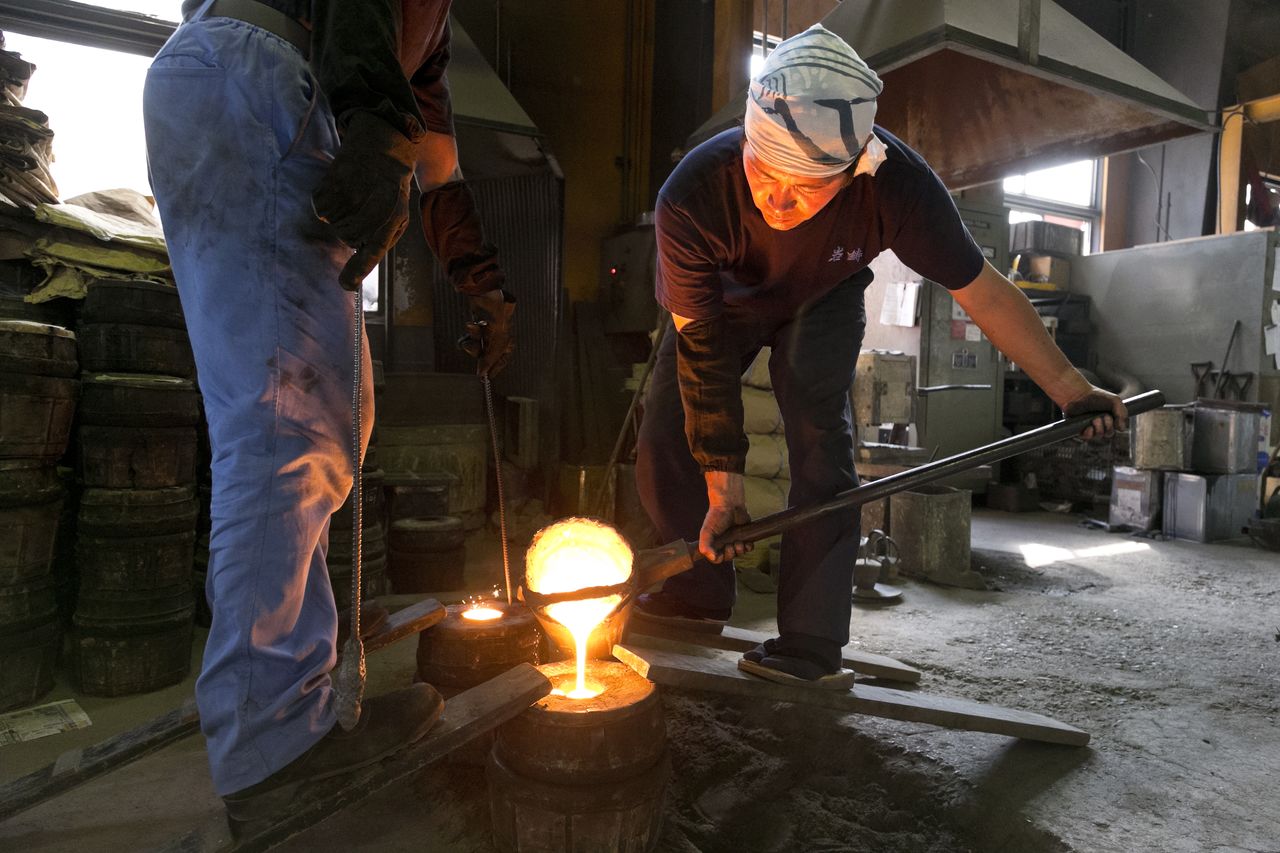 Traditional casting process. A casting mold is made from fine river sand and clay, and then filled with 1,500°C molten iron. (© Iwachū) 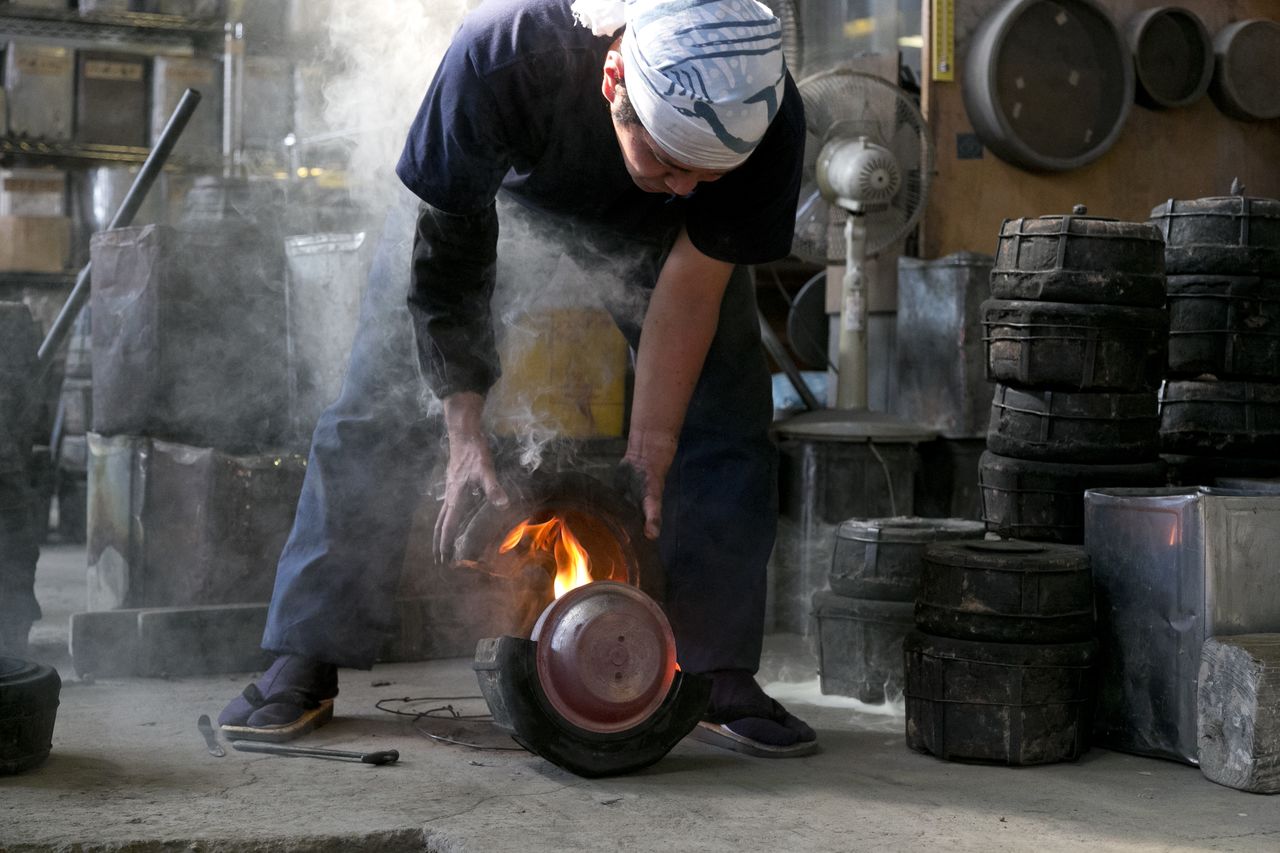 The kettle is removed from the mold, and then lacquered and painted under heat. This casting method only allows for five pieces to be made from each mold. (© Iwachū)

Taking a step into the Tekkikan shop quickly reveals the innovation Iwachū brings to traditional technique. In contrast to the pitch-black image most people have of cast iron work, the shop offers a beautiful display of colorful teapots and incense burners. Currently, these eye catching items account for around 70% of Iwachū’s sales. Furthermore, about 40% of its total sales are in overseas markets, particularly the West and Asia, which is not at all typical for a traditional craft. 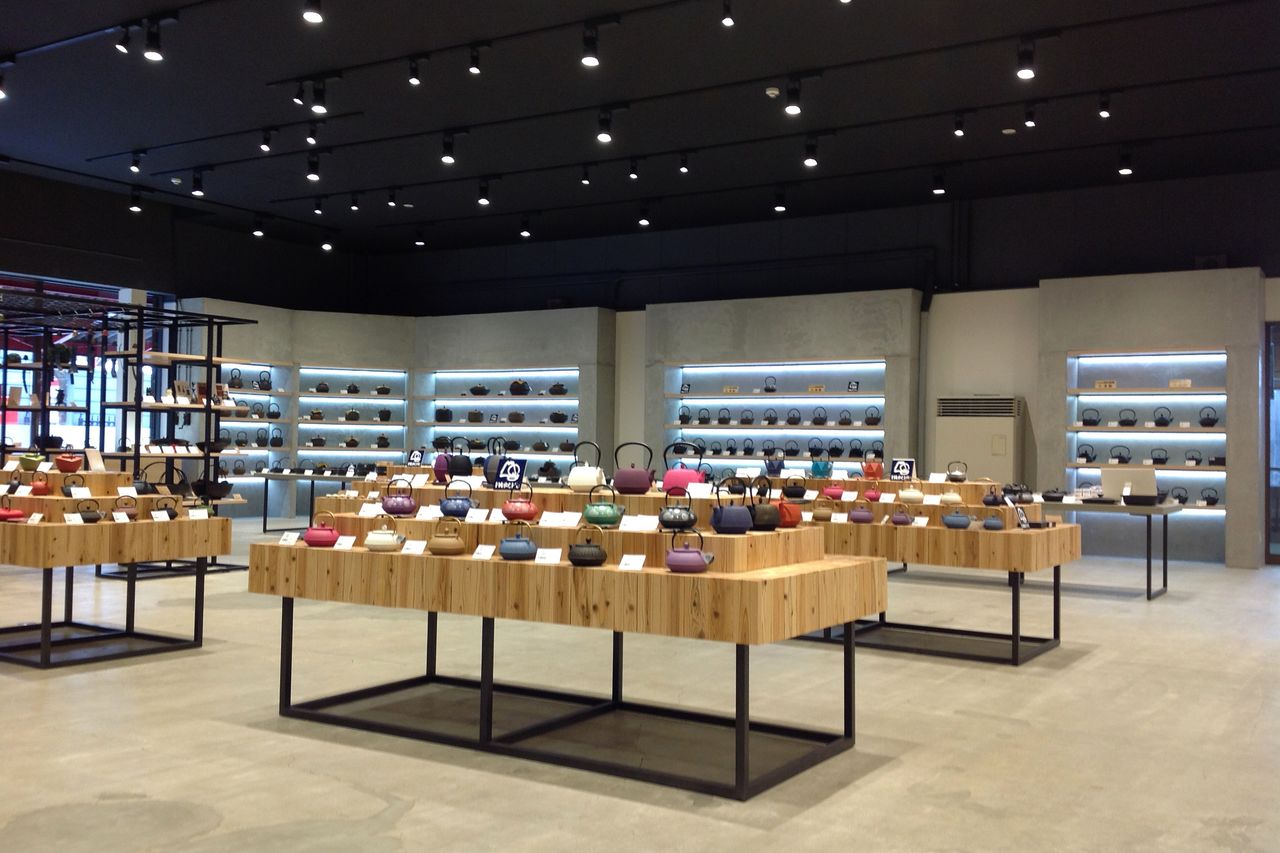 The Morioka sales floor was modernized for a November 2019 reopening. (© Iwachū)

These teapots were born when a French tea shop requested something more colorful to match local tastes. This went against the conventional understanding of the beauty of Nanbu ironware, with its darkness and weight. The company president still accepted the request, though, saying that Iwachū should be responsive to customers’ needs and try to create something more appropriate for the times. It took two years, but the workshop succeeded through hard hand work in applying color over a heat-applied subcoat to create a new, original look. 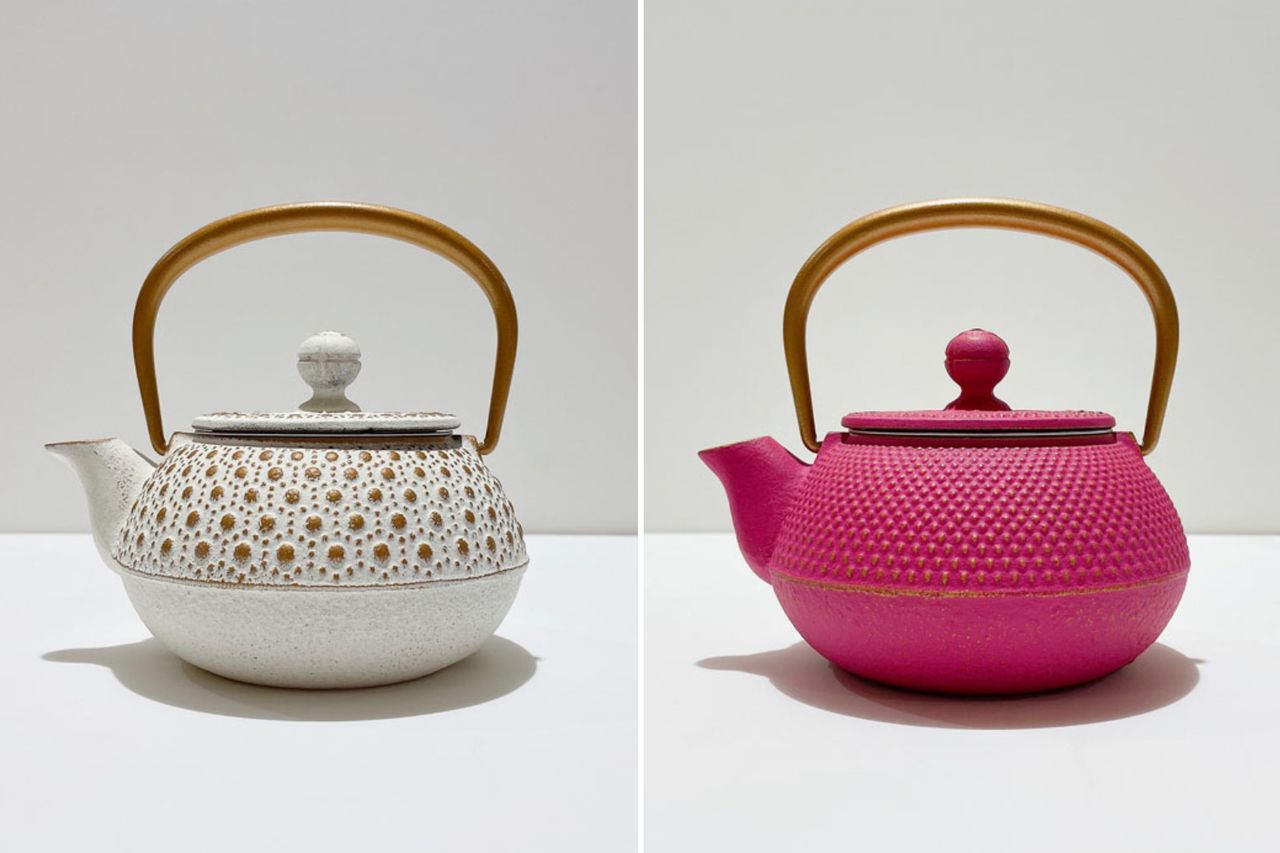 With their colorful surface and enameled interior, these teapots are quite collectible at ¥7,000. Prices overseas are around 2.5 times as much, which is not at all cheap, but they still have passionate fans. (© Iwachū)

The domestic market was strong at the time, so Iwachū did not actively pursue the foreign market, but then the Japanese economic bubble burst in 1991. While other traditional industries were faced with dire prospects, Iwachū began aggressively expanding overseas with its new colorful Nanbu tekki teapots, finding great success. The company name became so ubiquitous that asking for Iwachū at retailers all over Europe and the United States would automatically get one a Nanbu tekki teapot.

The workshop expanded from kettles and teapots into other kitchenware like pots and frypans, and now it is the largest Nanbu iron caster in Japan, producing around 1 million pieces a year. 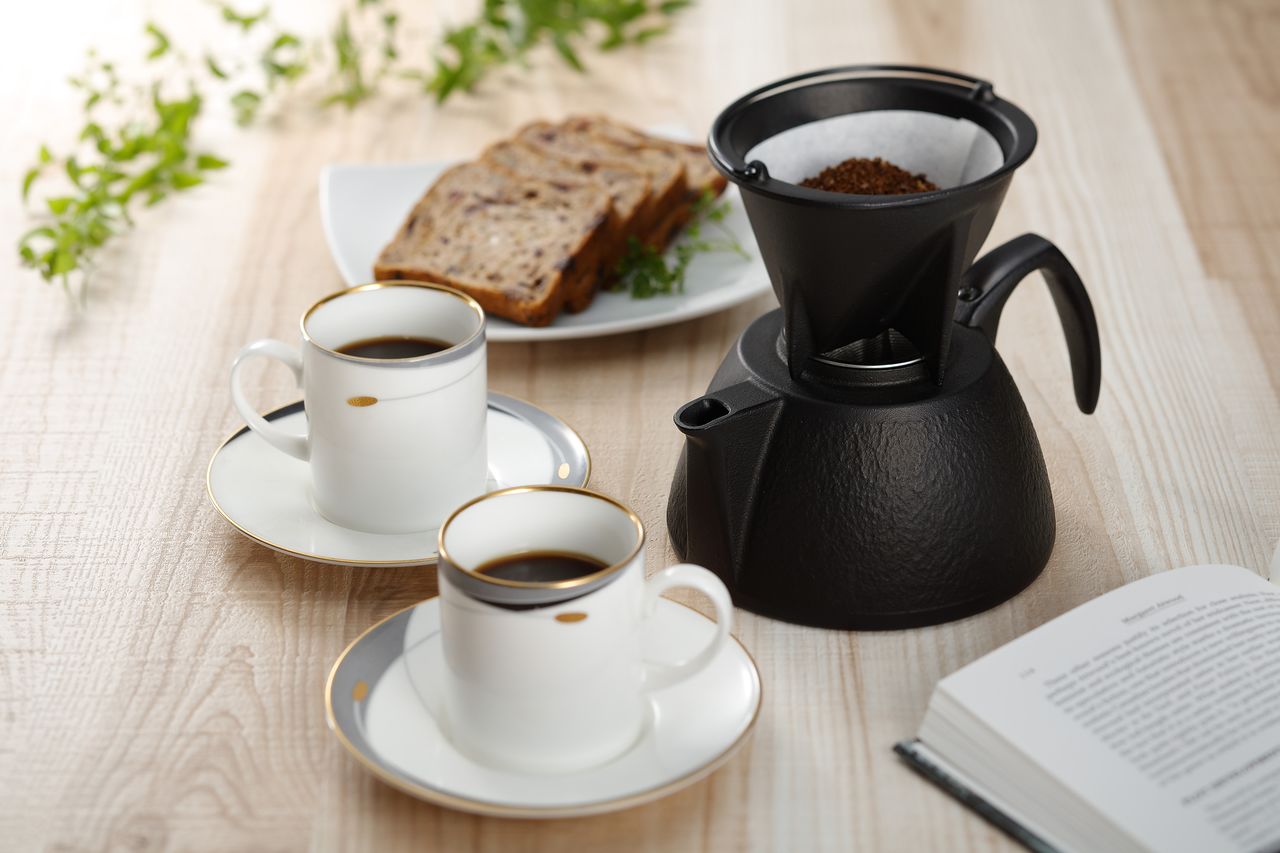 This coffee pot proved so popular it faced shortages for a time. (© Iwachū) 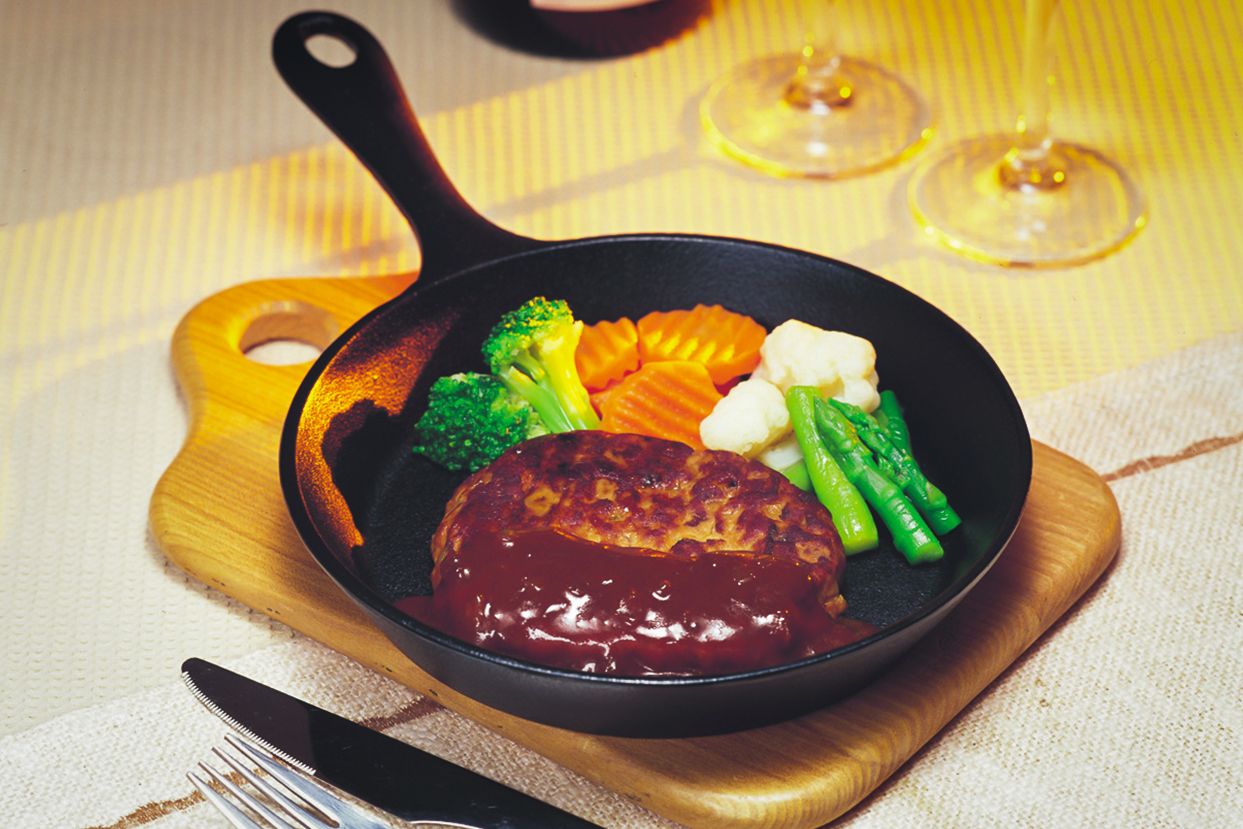 Iwachū approaches different markets with different techniques and strategies, since color or shape preference can vary by region. France and the United States, for example, prefer brighter colors, but markets in Germany and northern Europe demand darker ones. 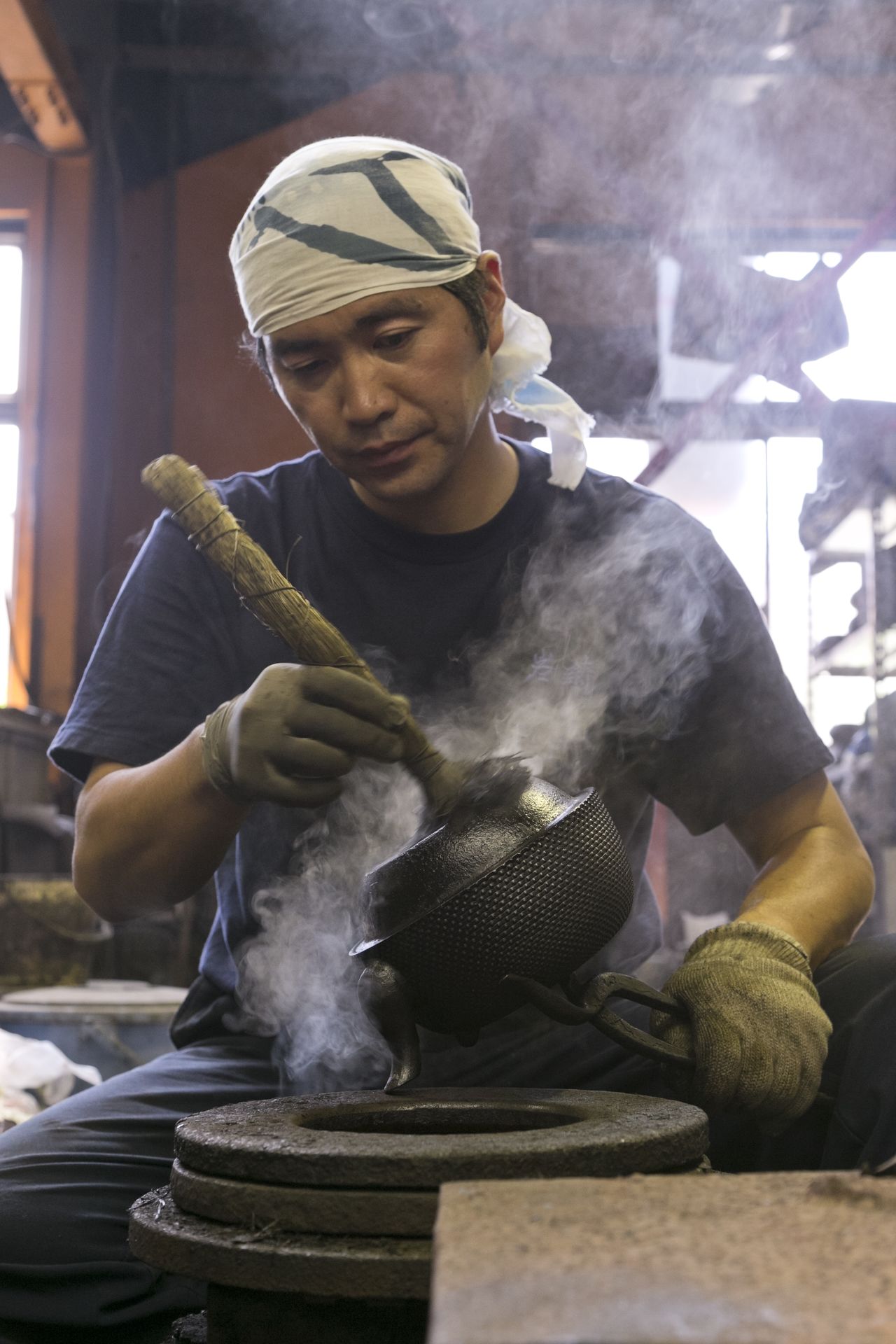 Applying color at the workshop. The kettle is heated to around 250ºC while the surface is lacquered. (© Iwachū)

While colorful teapots are all the rage in the West, the Chinese market seems to prefer traditional black Nanbu ironware. Iwachū appeared at the 2010 Shanghai World Expo, and its pots became a sensation after visitors tried pu’er tea made using Iwachū kettles, experiencing the mellow flavor they imparted to the water. The supplemental dietary iron they offer is also a draw for health-conscious Chinese consumers, contributing to expanding sales.

These traditional tea kettles are all hand-made by artisans, so the workshop is barely able to produce 160 a month. However, even though the company can barely keep up with demand, Iwachū remains committed to maintaining quality rather than cutting corners to increase production. This dedication has helped solidify its brand power in China.

Currently, its production of traditional items is still only one-third what it was at the company’s peak in 1990. The situation is still quite difficult, but Iwachū continues to grow both abroad and at home, as it balances inherited tradition with innovation and strategic acumen. Why not visit the museum to learn firsthand about the secret behind its success? 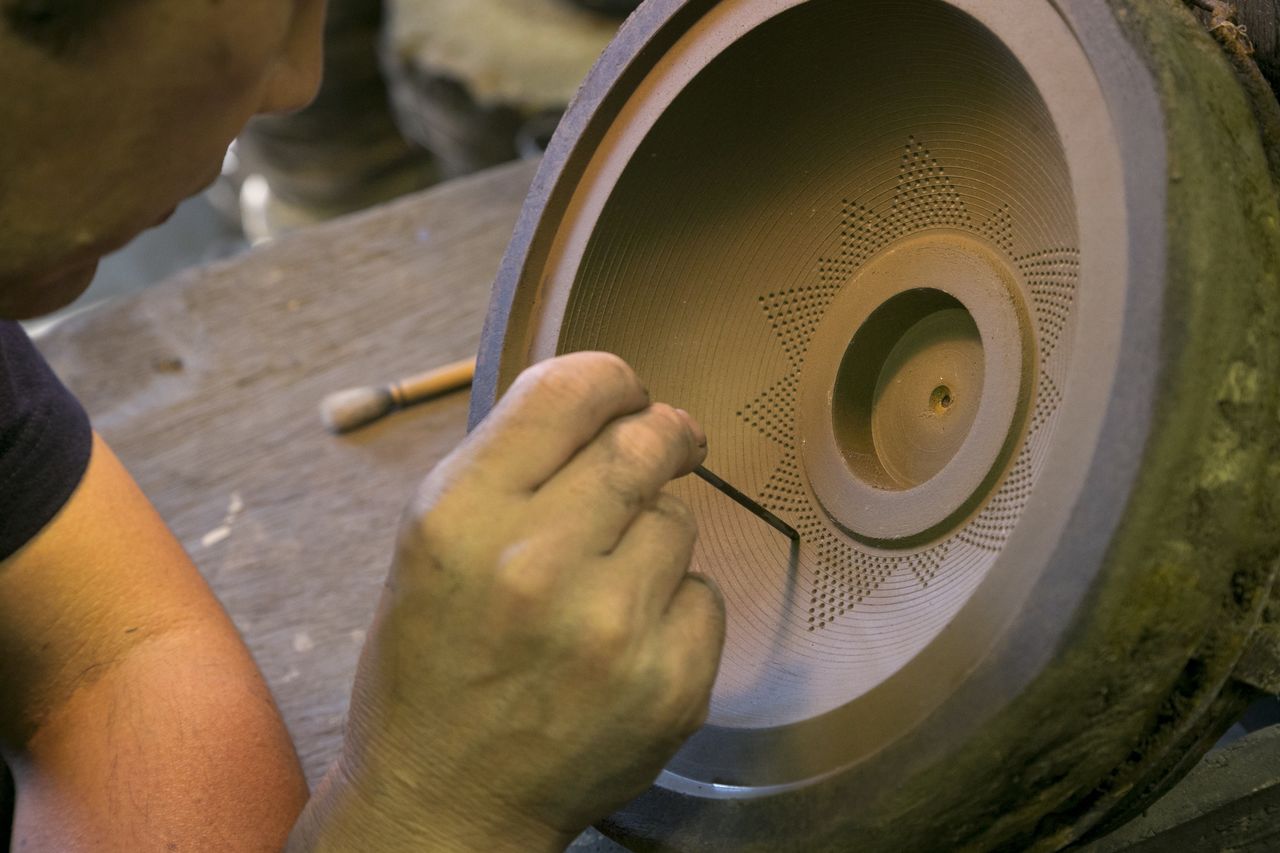 This arare pattern includes as many as three thousand dots on a single kettle. The skill of Iwachū artisans is a must-see at the Tekkikan. (© Iwachū)

(Originally published in Japanese. Text by Shoepress. Banner photo: Enameled interiors make for practical teapots, and there are many modern colors and designs to see. © Iwachū.)